Fate played a part in my choice of walk on 19 February 2014. As I was making my way back from Lakside a terrible accident was happening on a nearby route I’d thought about walking that morning. Of course, I didn’t know it at the time. Even so, on my walk home I witnessed a stupid act that could easily have become a tragic accident. It all left me thinking about the fragility of life and how easily we can be in the wrong place at the wrong time. 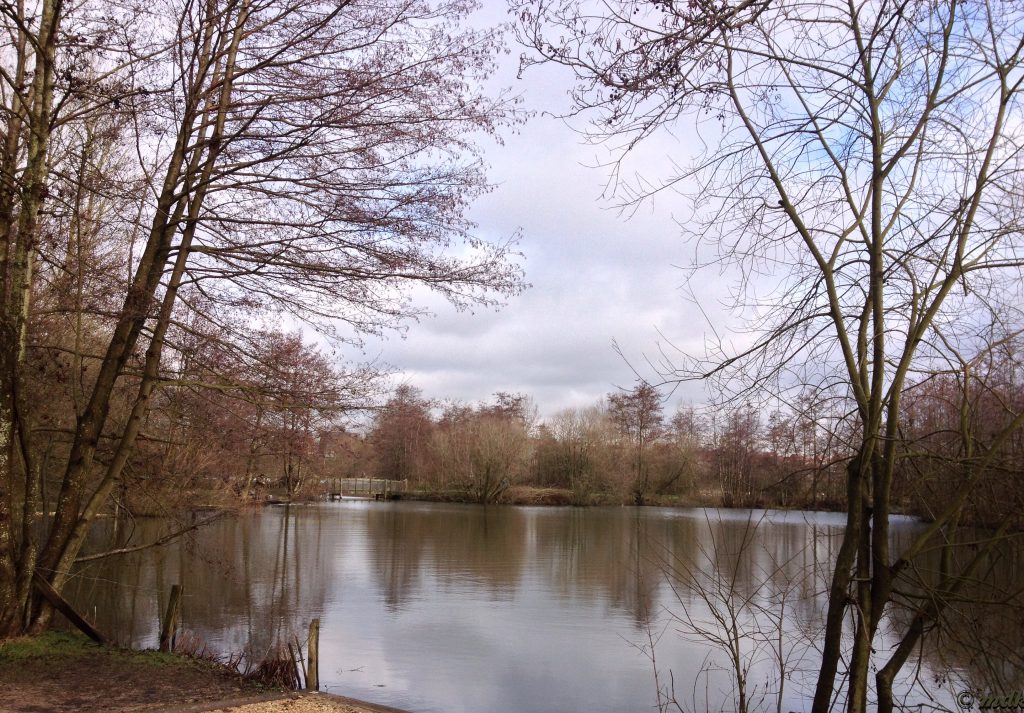 As I was walking home from Lakeside, unbeknown to me, a tragedy was unfolding a couple of miles from my home. Thankfully it was on a route I’d dismissed when I was thinking where to walk. A car, apparently turning right into a side road and a motorcyclist going in the opposite direction met, with horrific consequences. The motorcyclist, a woman of fifty, was killed.

When I was young I rode a motorcycle, so did most of my friends and this particular woman was one I met occasionally. Although I didn’t know her well, it made my blood run cold when I heard. She was a very good, kind hearted woman. Every year she organised toy runs, gathering all the bikers in the area to collect toys to take to children in the local hospital. She did the same at Easter with eggs. There really aren’t words to describe what an awful loss her death is to the community. Sometimes one moment can change your life forever and I’m sure the young man driving the car is suffering too.

As I said, I’m glad I chose not to walk that way. Fate, or luck, changed my mind and I suppose a lot of the things that happen to us are down to just that, being in the right place at the right time or the wrong one. Sometimes though, stupidity plays a part and on my homeward journey I witnessed astounding stupidity that could well have led to tragedy.

When I left the lake there was one big obstacle ahead of me, the ford crossing Monks Brook. This same stream passes under the little blue and green bridges then joins up with the Itchen just upstream of Woodmill. Would it be as swollen as the Itchen? Back last January when I first visited Lakeside I turned the corner, saw the ford and thought I’d have to turn back. At the time I didn’t know about the bridge that crosses beside it. With all the rain we’ve had the stream may have breached its banks. If it had I’d have to turn back because there was no way I was going to take any risks. When the main path came in sight again I wasn’t optimistic. The first thing I noticed was mud, lots of squelchy mud. At least the path, when I reached it, was dry although it was smothered with debris where water had been flowing recently. The mud I’d seen was on a second path, one that crosses the fields as far as I can tell. The ford and the bridge were nowhere near as bad as I’d expected either. In fact two women and some dogs were standing in the shallow water at the edge looking towards the weir. That didn’t seem to be a very sensible thing to do, especially as the barrier was down across the ford. 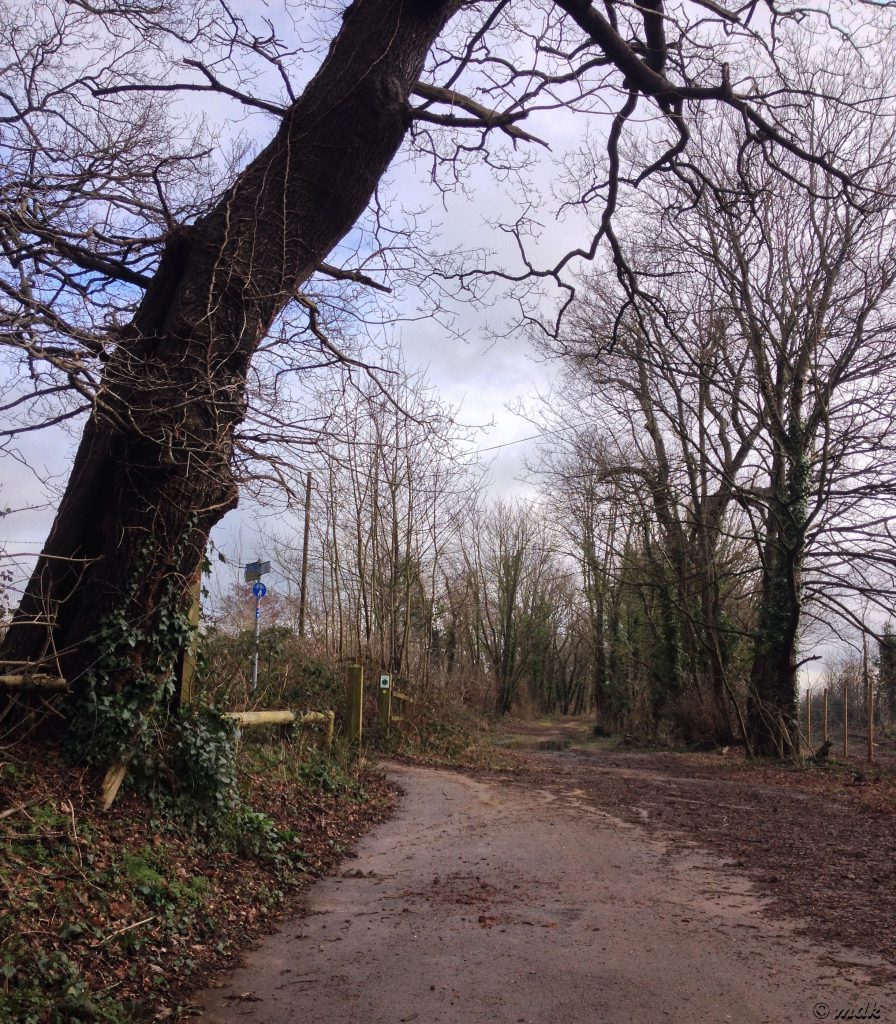 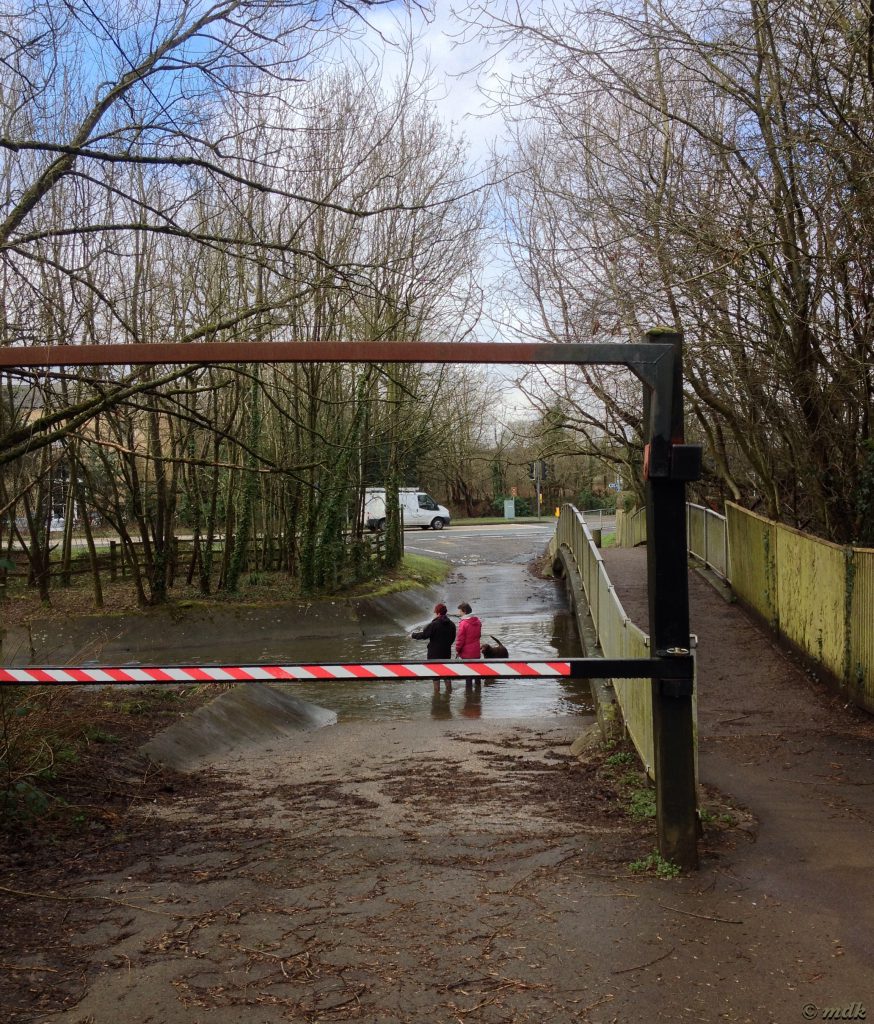 As I got closer I could hear the women encouraging their dogs to swim, they were throwing sticks into the water and calling out, “fetch.” The dogs seemed fairly reluctant and I can’t say I blamed them. The water must be freezing, not to mention fast flowing right before the weir. A dog could easily get caught in the current and dragged over into the tumbling water.

When I was actually on the bridge I saw, to my horror, that one woman was wading deeper and deeper, not only towards the middle of the stream but also closer to the weir. Then she actually threw a stick over the weir. Luckily the dog was far more sensible than his owner and ignored it. Even so, it seemed like an especially stupid thing to do. The weir may only be small but the stream is swollen and it’s running far faster than I’ve seen it before. The dog could easily have drowned or the woman could have slipped and been swept away. I could hardly bear to watch so I left them to their stupidity and made for the road. Maybe I should have hung around in case something happened? Actually I was quite angry that she was putting her dogs at risk. 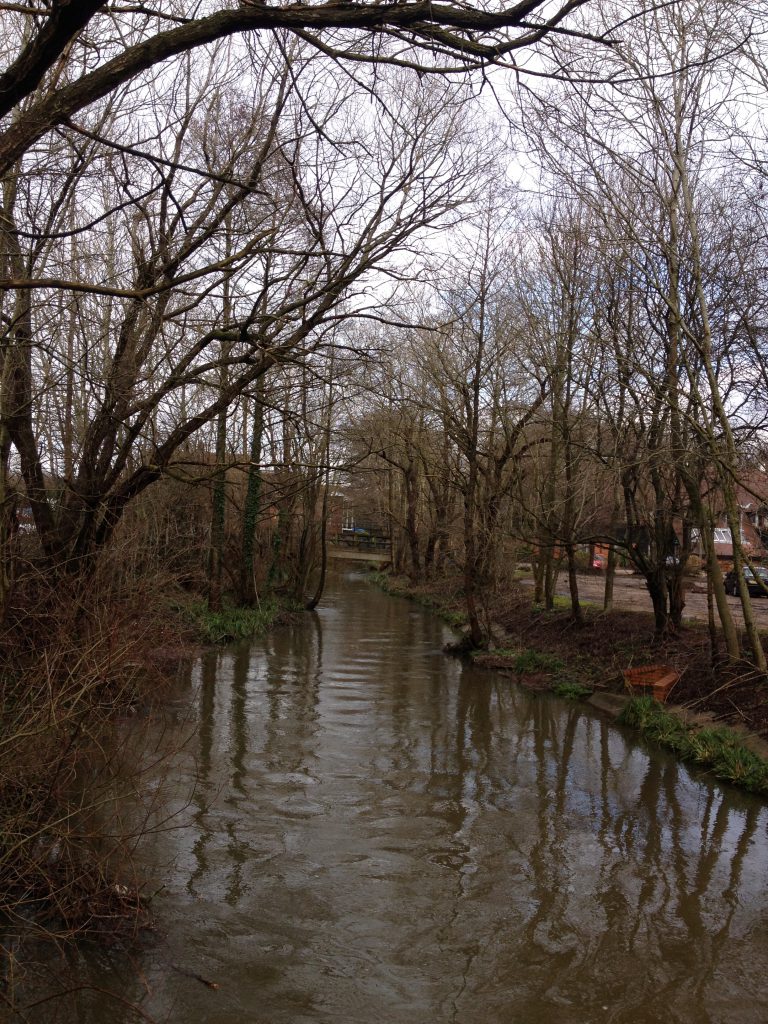 The next three quarters of a mile of my journey was along a winding road with no footpaths. Obviously there are some risks I am willing to take although I hate walking on the road. When there is no alternative I always take the proper precautions, walk towards oncoming traffic except on blind bends, keep my eyes and ears open and be prepared to get on the verge if necessary. It does mean I miss out on spotting interesting things though. 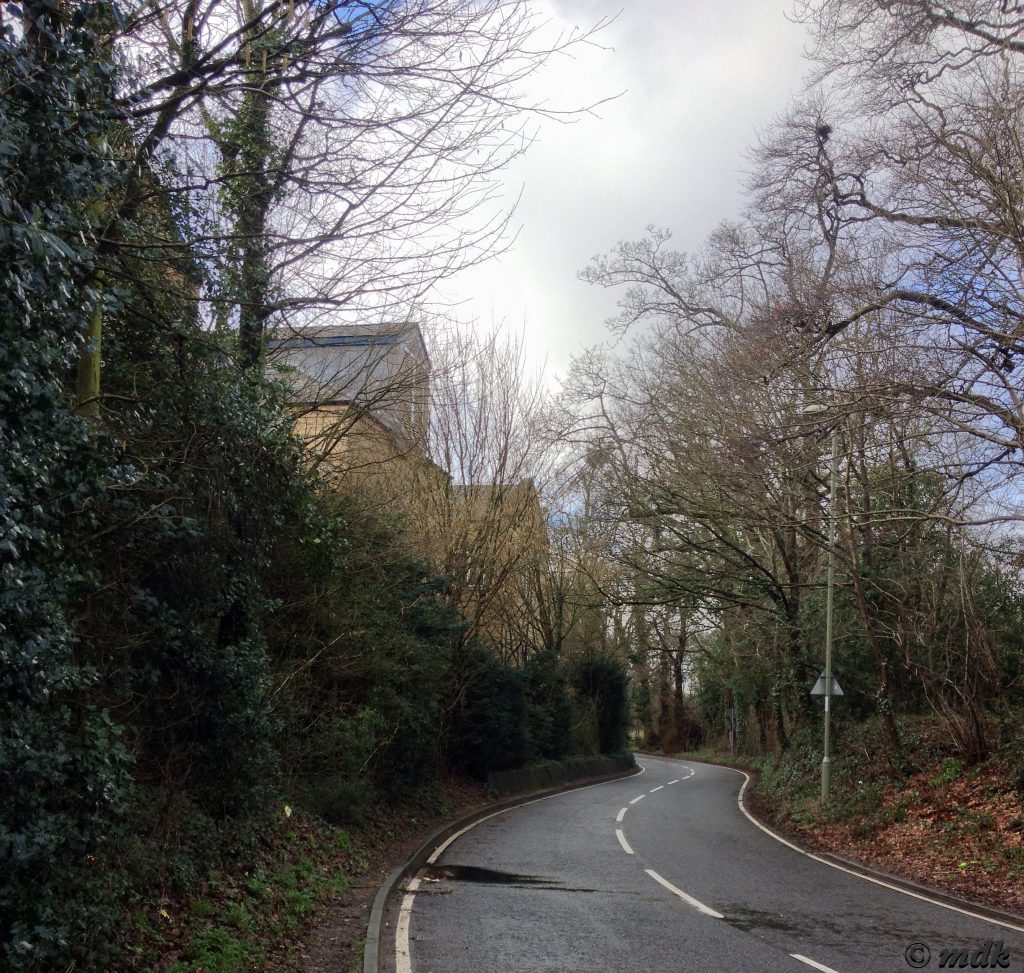 Just under a quarter of a mile along the road there is a very interesting church. Luckily visibility is good there so I did stop briefly to take a few pictures. The church is called St Nicolas and it’s medieval, dating from before the late fourteenth century. There’s a beautiful lych-gate with stone seats inside and words carved on the lintel, what they say is beyond me though, perhaps they’re Latin? The gate was built in 1909 in memory of Emily, the wife of James MacArthur the Bishop of Southampton at the time. Isle of Wight architect Percy Stone designed it and used oak taken from HMS Thunderer a ship from the Battle of Trafalgar. How’s that for history? 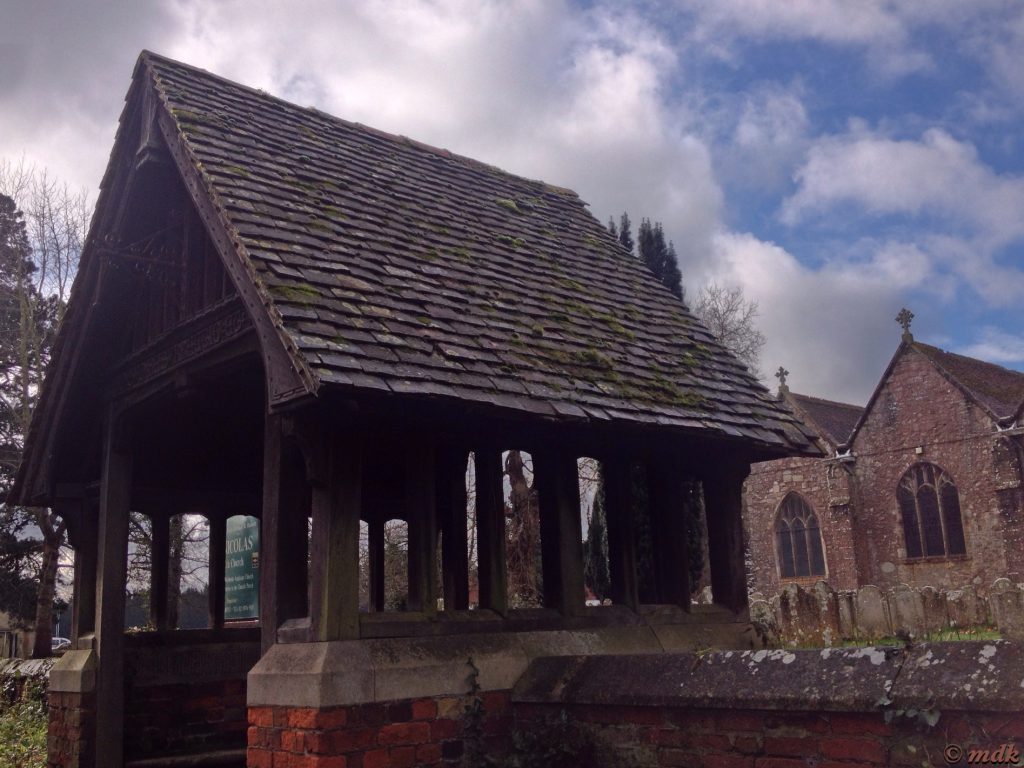 The church itself is attractive and, from what I have read, some of the graves are very interesting indeed, not to mention the lichen growing on them. The most unusual feature though is the famous One Hand Clock. This was installed in the early seventeenth century, the works being made by William Monk of Berwick St John. A clock with only one hand, pointing to the hour, seems a trifle confusing to me but the reasoning was that, back then, ‘time was counted in hours, not minutes.’ I should think it was less complicated to make too. There are twenty two one handed clocks in England and one other in Hampshire, in Selborn, about twenty five miles north of me. I think St Nicolas’s Church could stand some further exploration and one day I might even make it to Selborn. 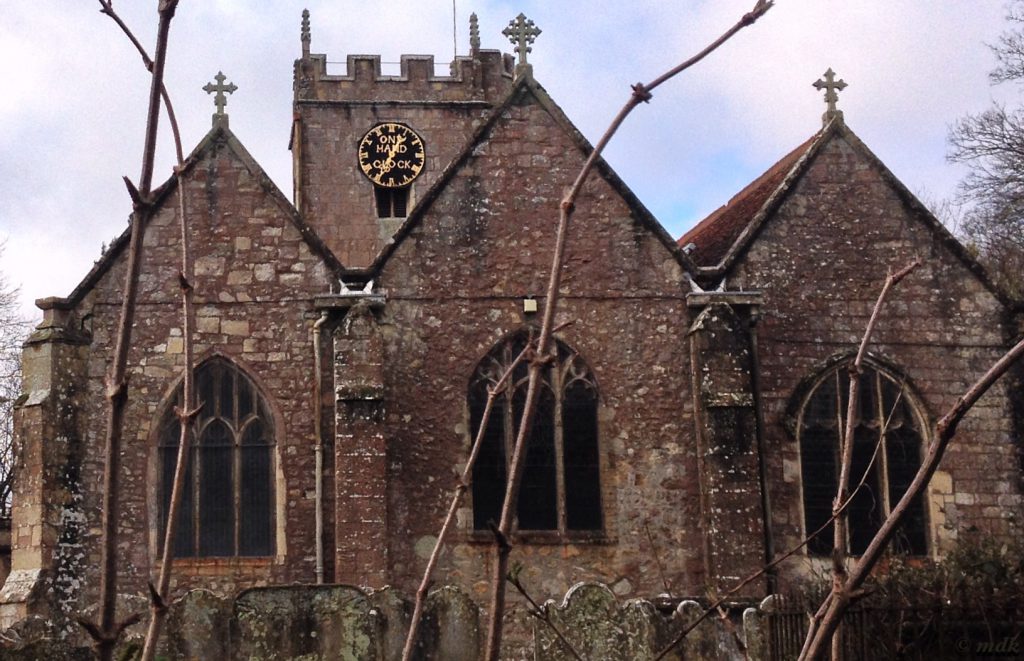 The rest of the walk was uneventful, once I got back onto pavements it was mostly through the suburbs. It wasn’t until I was a mile and a quarter from home, that my phone came out of my pocket. My route home took me along the bank of the Itchen opposite Riverside park and I’ve never actually walked that way before. From the satellite map I thought there may have been a path behind the houses and I wanted to check it out. Unfortunately I was wrong. There is a path but it doesn’t run very far and it’s blocked off in places. I did manage to get down to the water at one point, more or less opposite the jetty and, as a child was with his mother throwing bread, I got some nice shots of swans and a different perspective on Cobden Bridge. 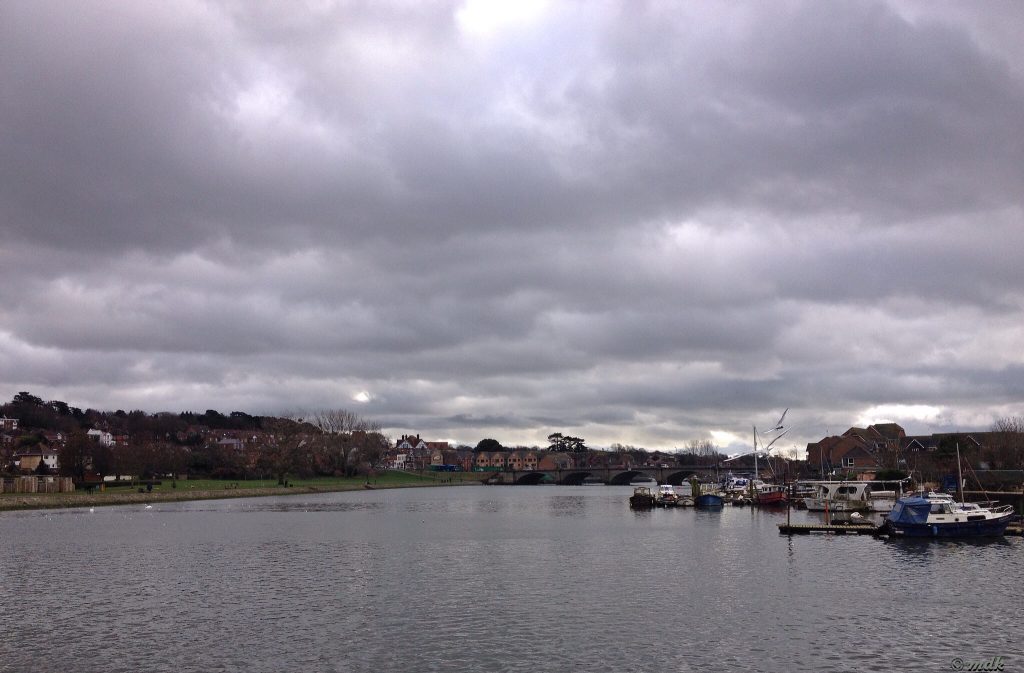 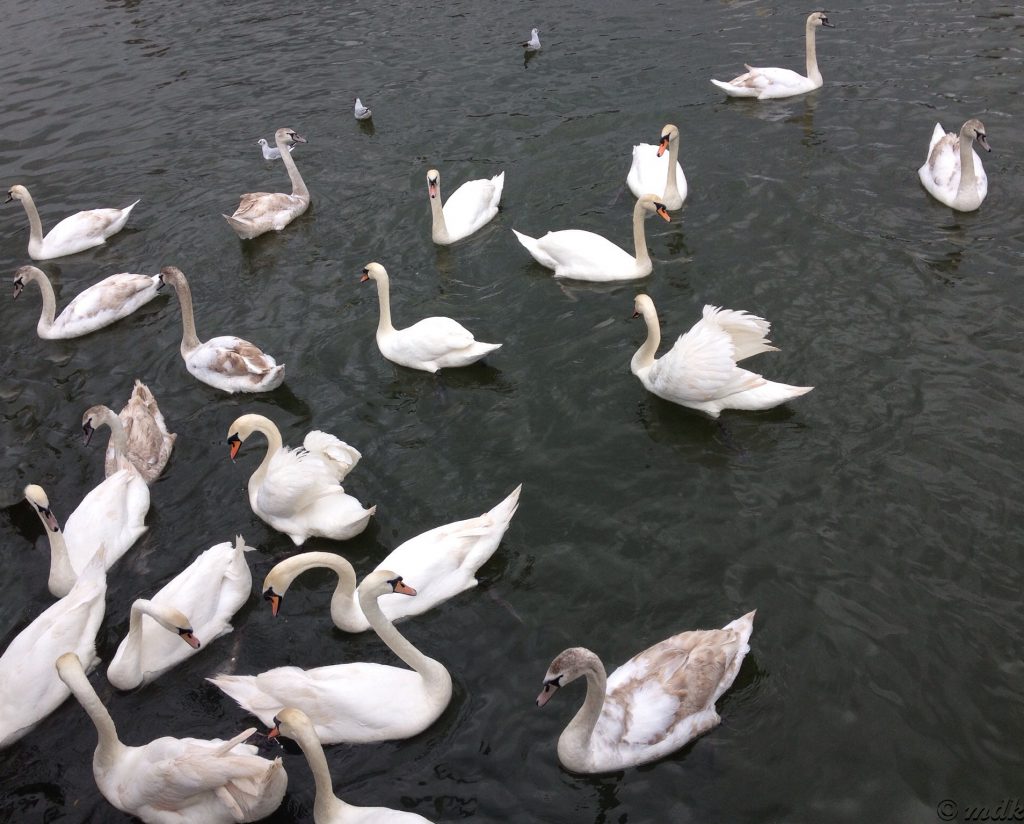 When I reached Cobden Bridge I got a closer look at the sunken houseboat along with some of the others there. It was nice to see things from a different perspective. All in all my walk was just over eight and a half miles. I managed to make it home safely, no getting hit by cars, not even any near misses, no falling in rivers, I didn’t even get rained on. Fate was on my side today, sadly, it wasn’t on everyone’s. 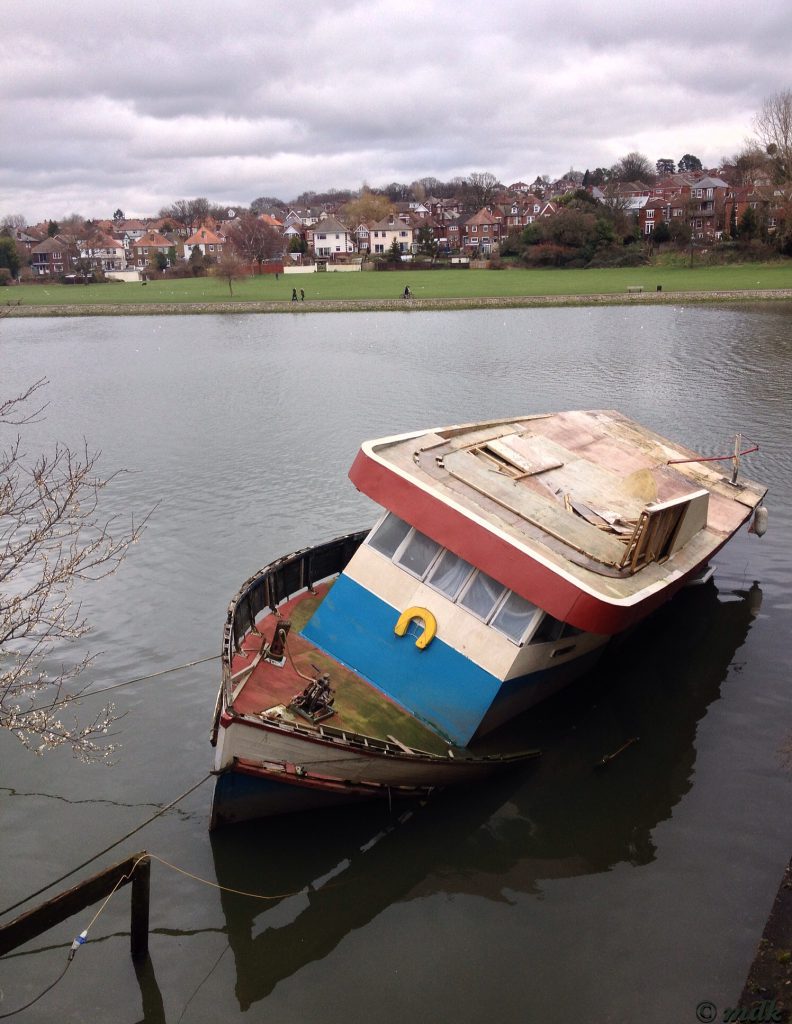 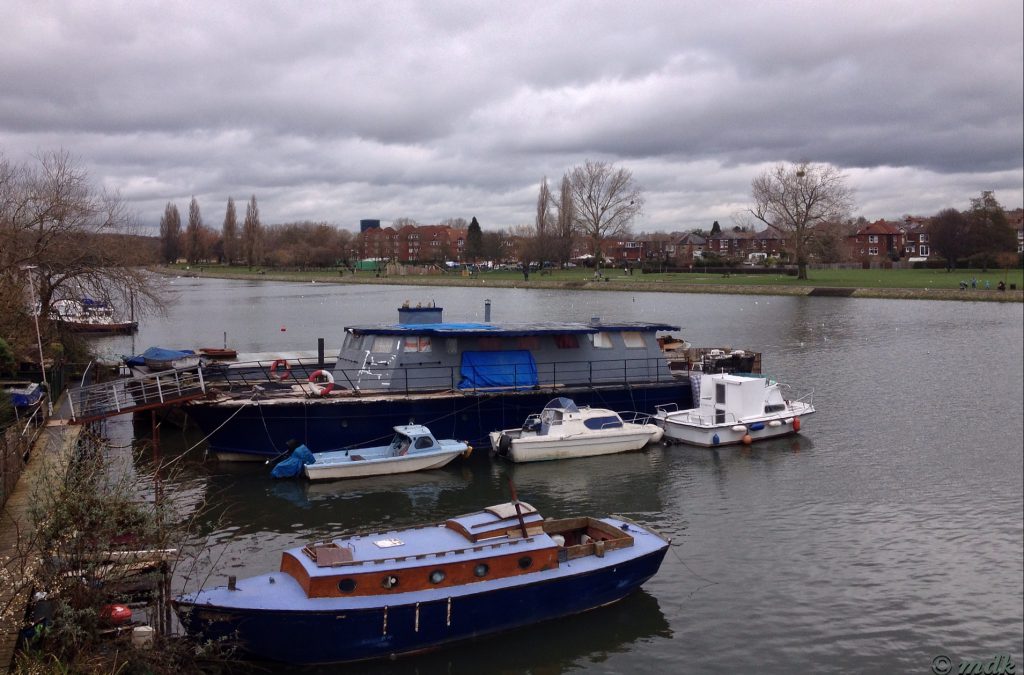