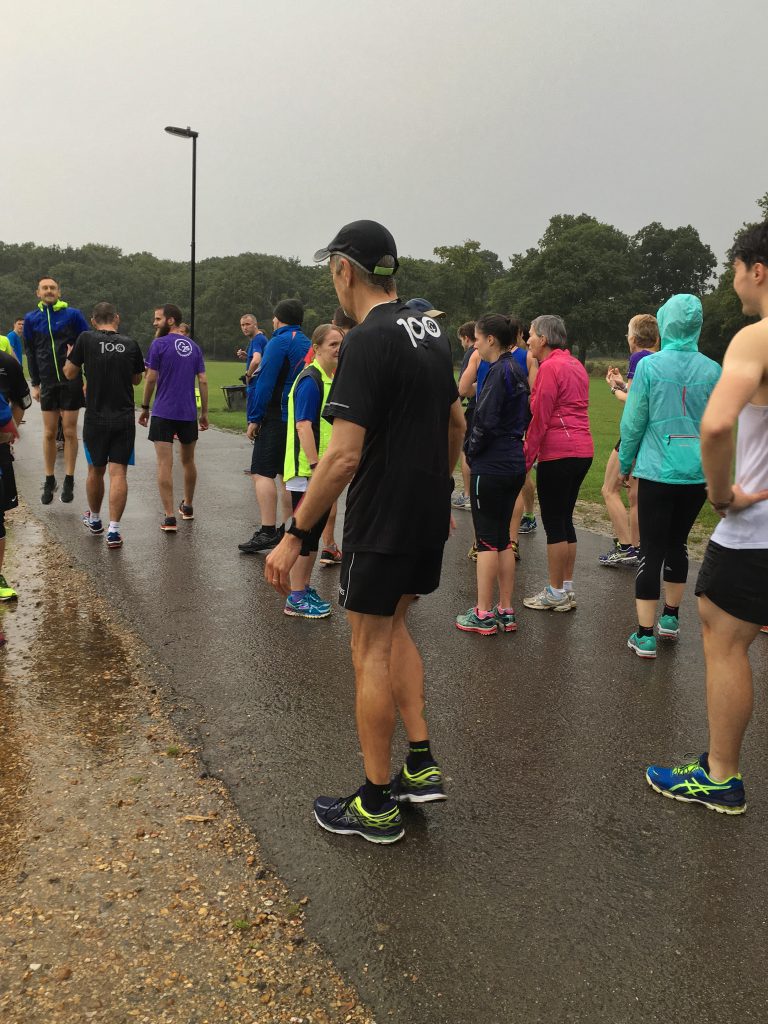 After an Indian Summer September, October came in with a storm. On any other Saturday morning I might have decided to stay in bed and let Commando go to parkrun on his own. This though, was a special day. For the first time since he broke his leg, Commando would be running the parkrun course. Part of me was worried something would go wrong and we’d be back to square one. Even though he’s been religiously sticking to his back to running training plan I couldn’t help worrying he’d get carried away and push too hard in an actual race.

When we left the house it was raining but I was bundled up in warm clothes, my lightweight mac and my waterproof mac over the top so I thought I’d probably stay dryish. We parked up on Cemetery Road and sat in the car for a while with the rain teemeing down around us.

“It looks like it’s easing off,” Commando said after a bit, “maybe it’ll stop before we have to get out of the car.”

As if to prove him wrong there was a flash of lightning and a crash of thunder and the rain came down harder than ever. I couldn’t help looking at the trees we were parked under a little nervously, thinking about all the trees that have fallen in storms in recent years.  In fact one fell on a car in this very car park in early 2015.

When we could procrastinate no long we braved the rain and headed up to the start. The crowd wasn’t as big as usual but I can’t say I blamed people for staying at home on such a horrible day. Despite two waterproof coats with hoods and a hat water was slowly seeping through to my skin. When runners began taking their waterproof jackets off in preparation for the start I can’t say I envied them. Under his, Commando was wearing his brand new 100 parkrun t-shirt. It arrived at around the same time he got injured and he’s been saving it for his return to running. 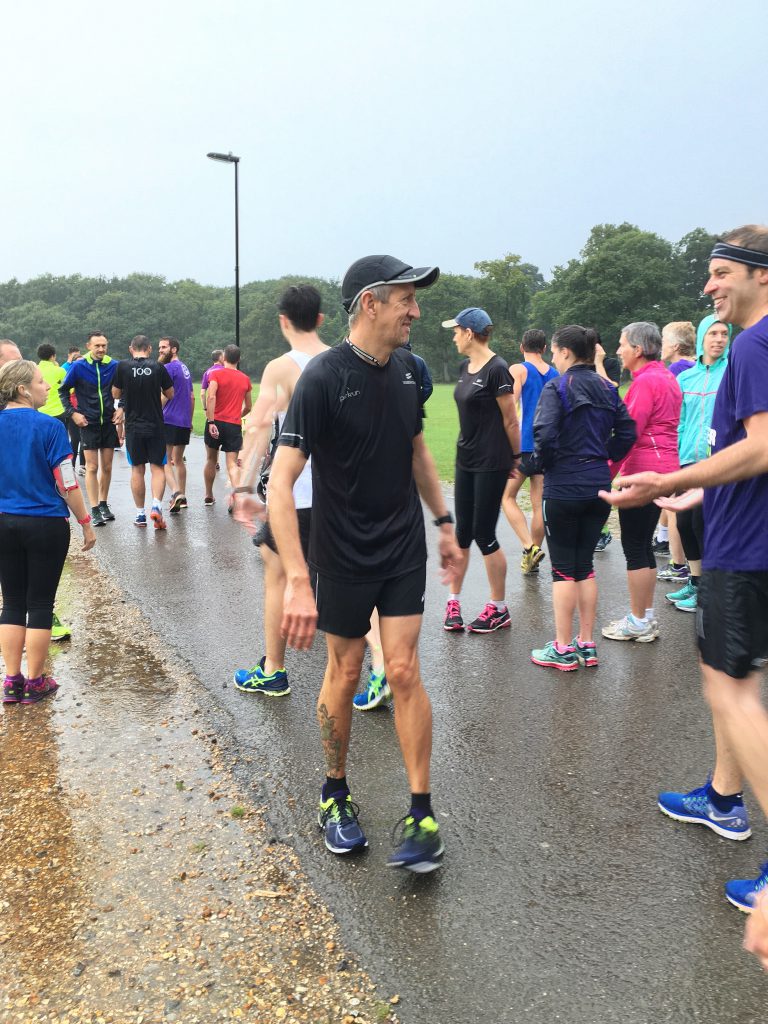 Everyone seemed please to see Commando running again and Rob and Lee, who are normally super speedy, said they’d run with him even though he said he was aiming for a thirty minute finish which is pretty slow by their standards and his. As he stood waiting at the start in the pouring rain he looked slightly nervous, a little like the new boy at school. Rob and Lee had promised to rein him in if he looked to be getting carried away but I wasn’t entirely sure they wouldn’t get carried away themselves. 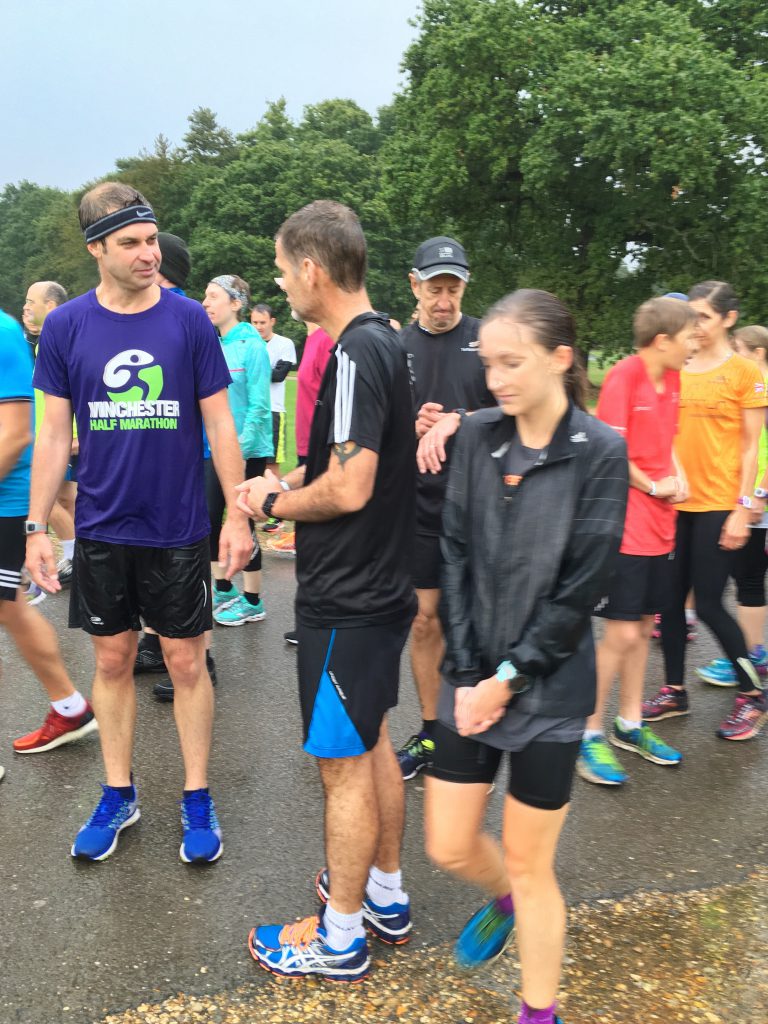 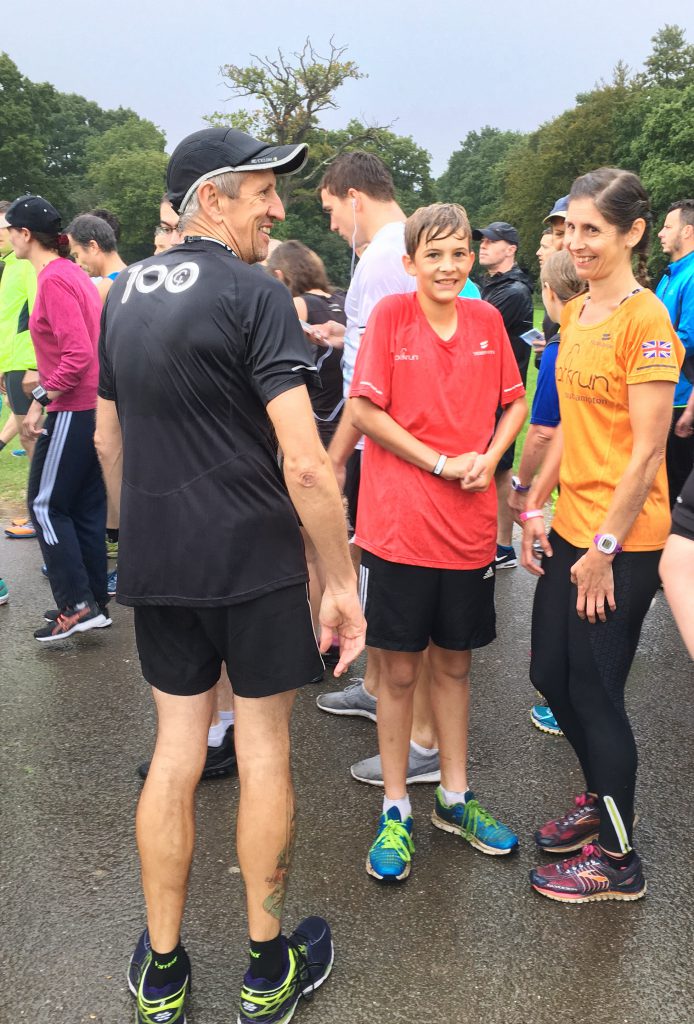 Along with a small crowd of funnel managers, token people and scanners I stood on the wet grass watching the briefing. The Run Director had an umbrella and I was quite envious of it. Then they were off. Even with the relatively small crowd it was hard to spot Commando so I just shot photo after photo with my phone in the hopes of capturing him. Luckily I did manage to get him in a couple of pictures but I only spotted him for real when he waved to me. 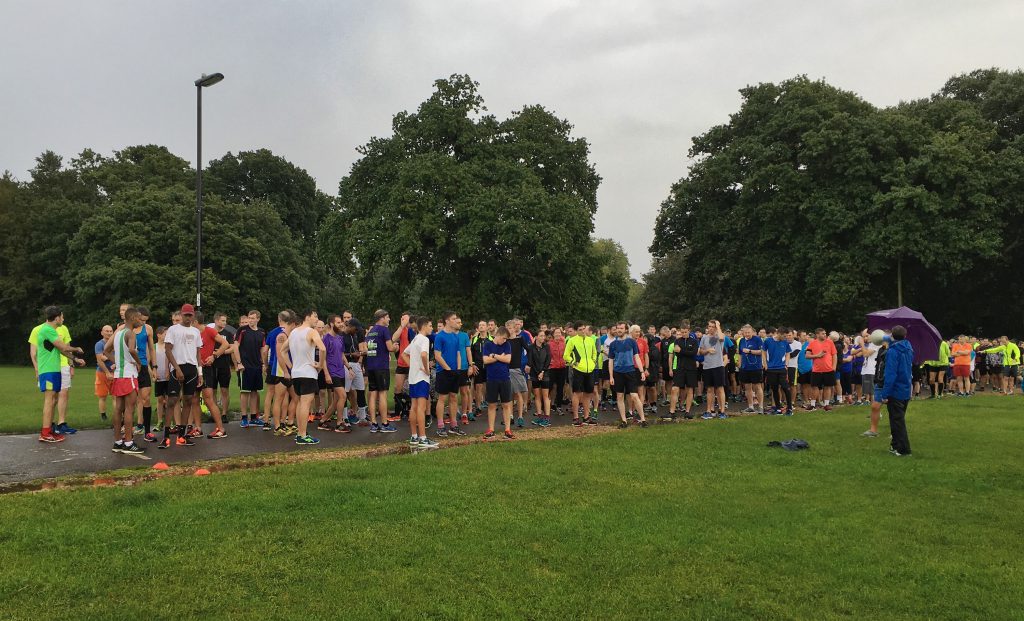 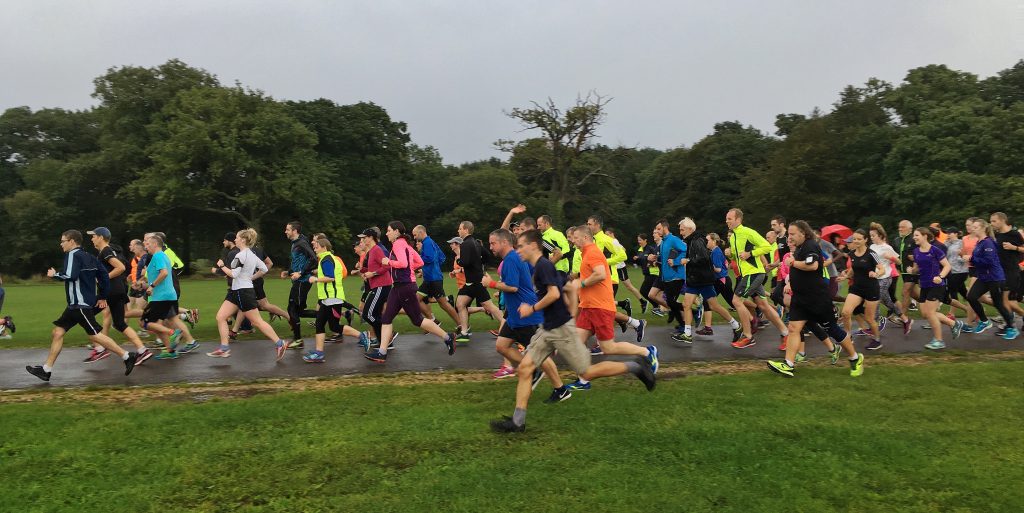 Pretty soon the runners had turned the corner and were out of sight. All that was left to do was wait but at least the rain had eased off. For me it was a little late. Water had soaked through my waterproof jacket, my showerproof jacket and all the layers underneath and was trickling gently down my skin. 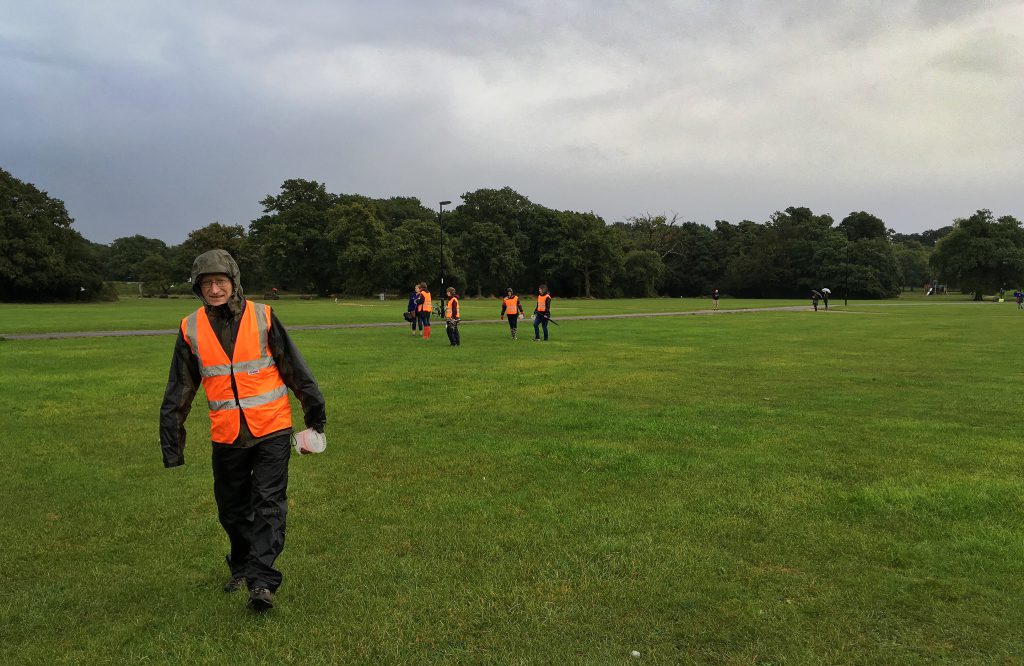 When I spotted Commando heading for the start of his second loop all the uncomfortable wetness was forgotten.  Rob and Lee were still with him and he looked comfortable with no limping. He gave me a wave as he passed, then it was back to the waiting until he came round again to the finish funnel. 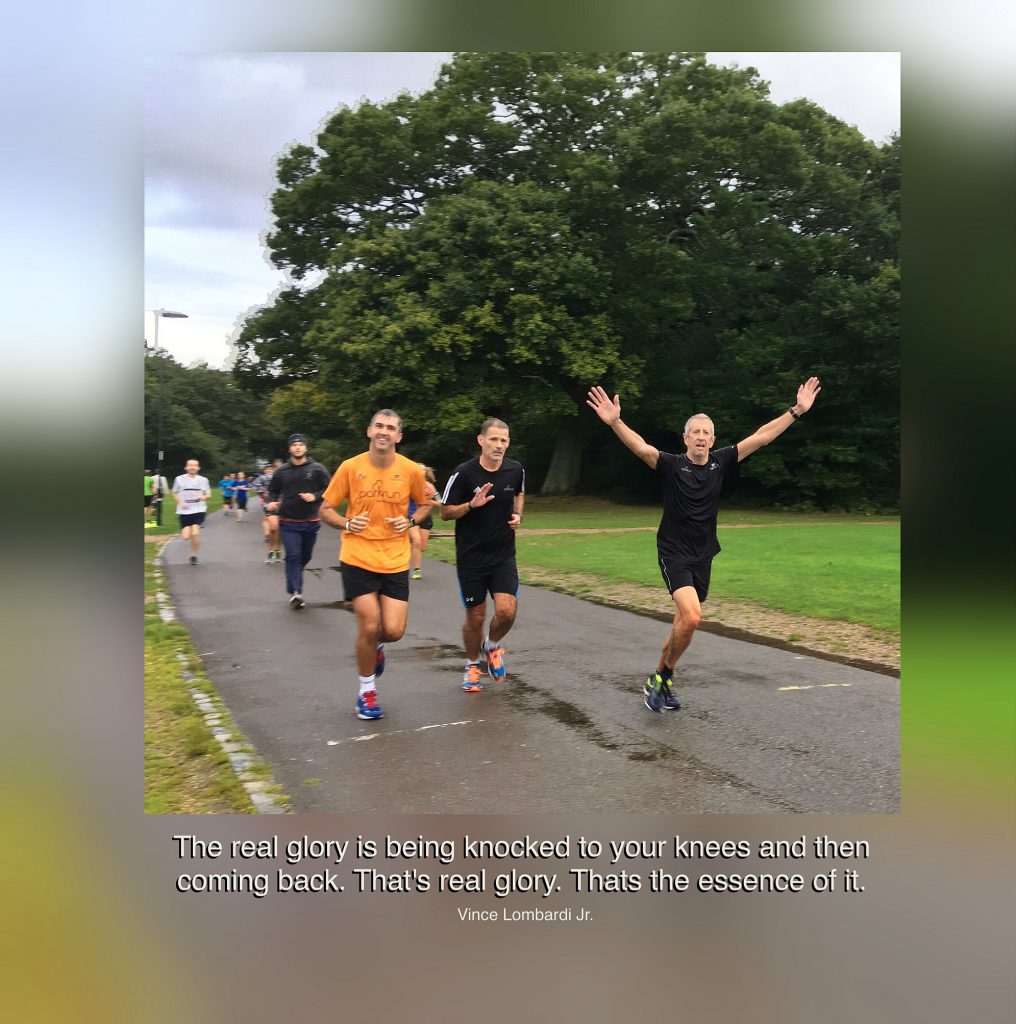 At the risk of getting a telling off from the funnel manager, I found a position right by the finish line and prepared to capture a victorious finish. At least I hoped that was what it would be. It wasn’t long before I spotted him. The last part of the course, leading up to the funnel was a bit of a puddle dodging exercise and I watched as he wound his way round the bigger puddles and jumped over the smaller ones. Then he was over the line and heading along the finish funnel. 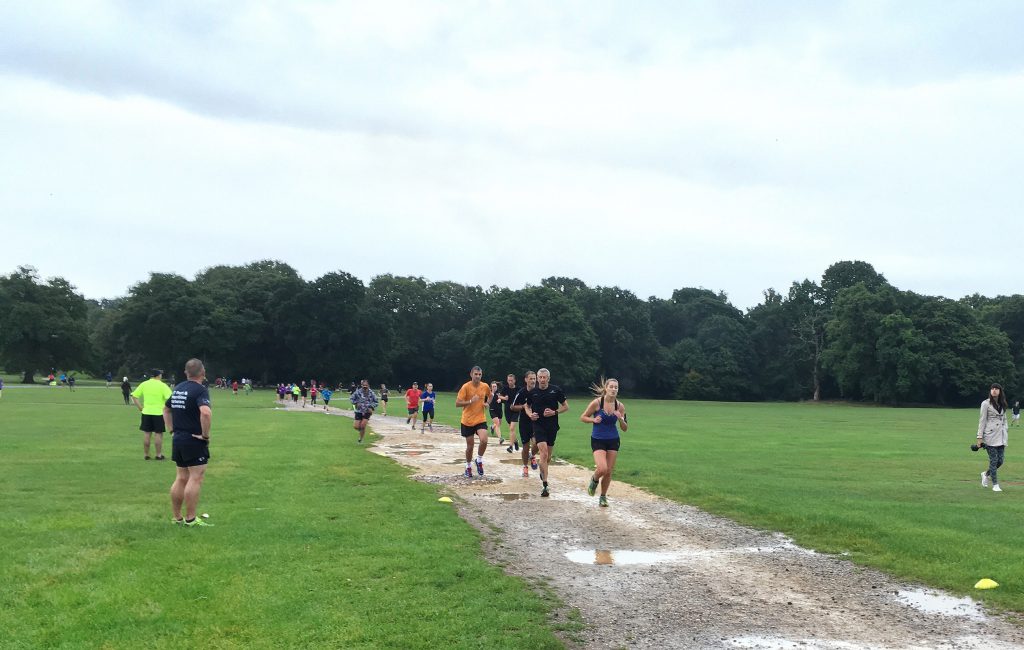 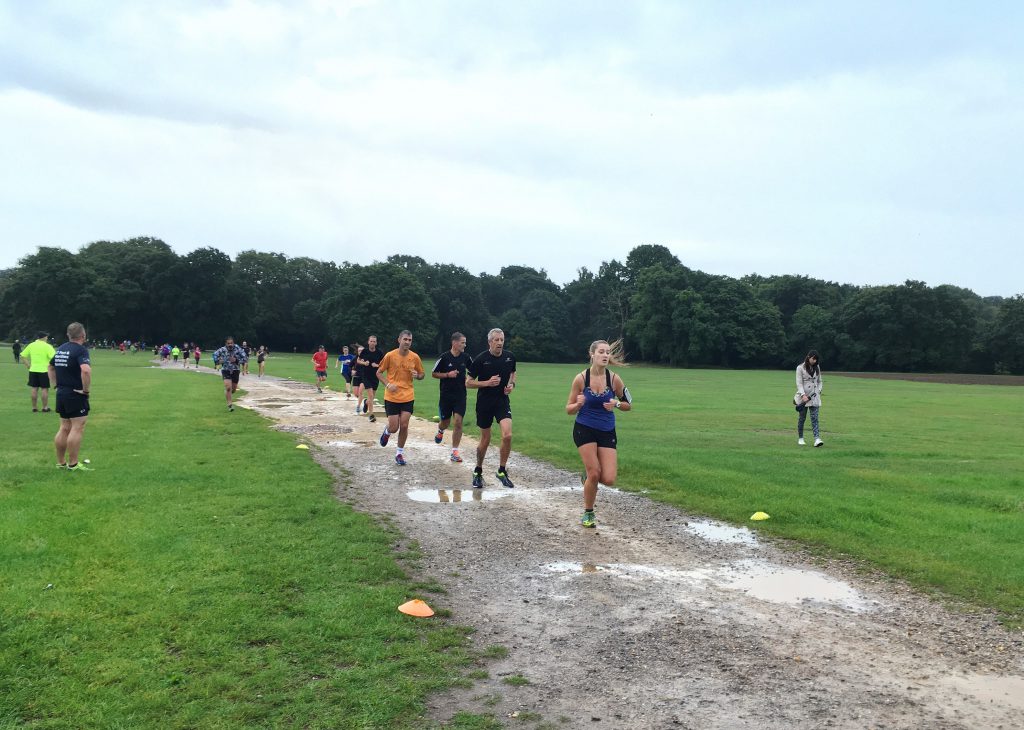 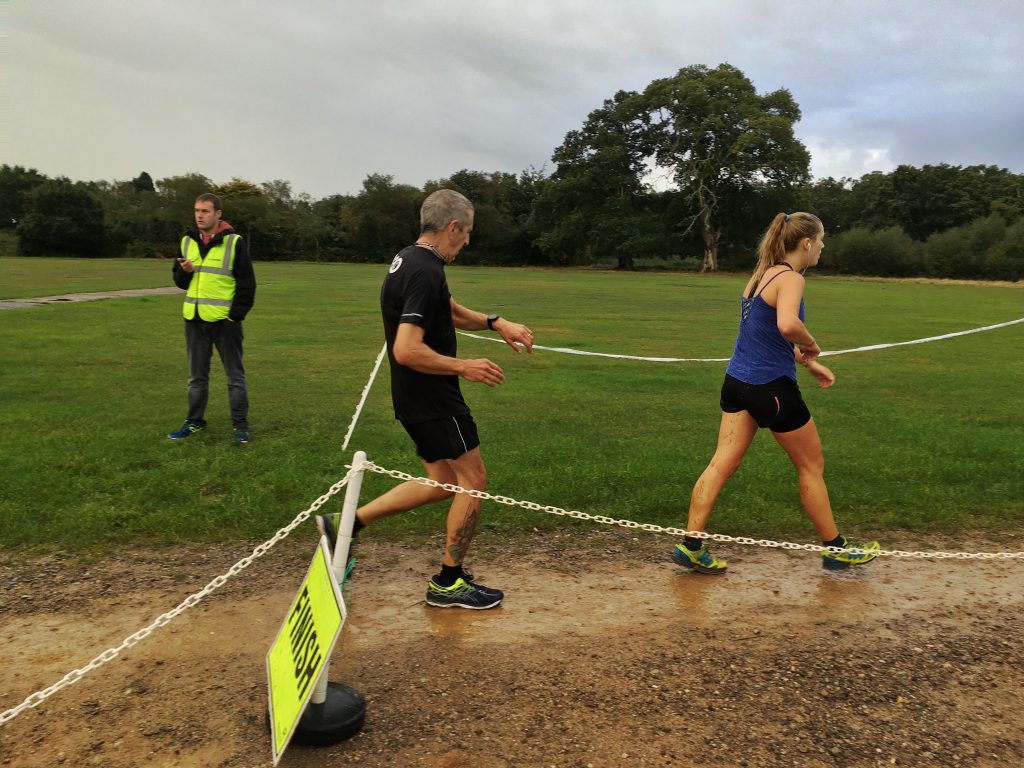 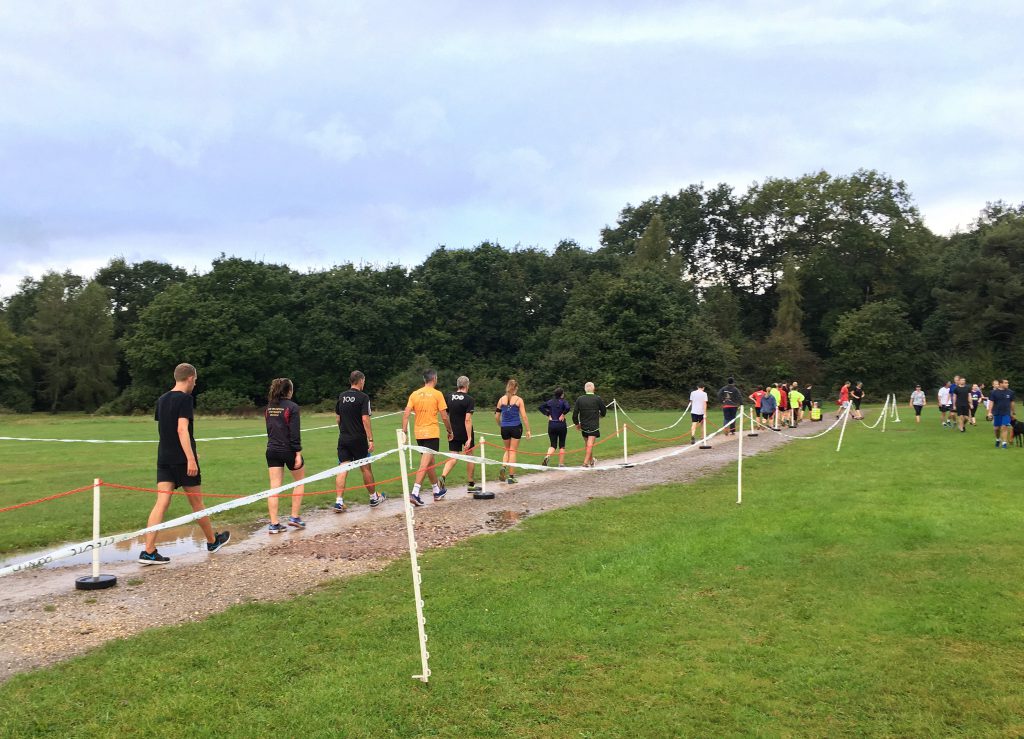 Of course I walked up to meet him and to thank Rob and Lee for looking after him. As we walked back towards the scanners Rob said, “we had to keep telling him to slow down.”

Even with their warnings he finished in 26.16, almost four minutes faster than he’d said he would. It may be a far cry from his PB of 21.24 but for a man who is recovering from a broken leg it’s a pretty good time and even Commando couldn’t complain about it. I’d meant to get a photo of Commando getting his barcode scanned but in the end I missed it because I was talking to Rob. 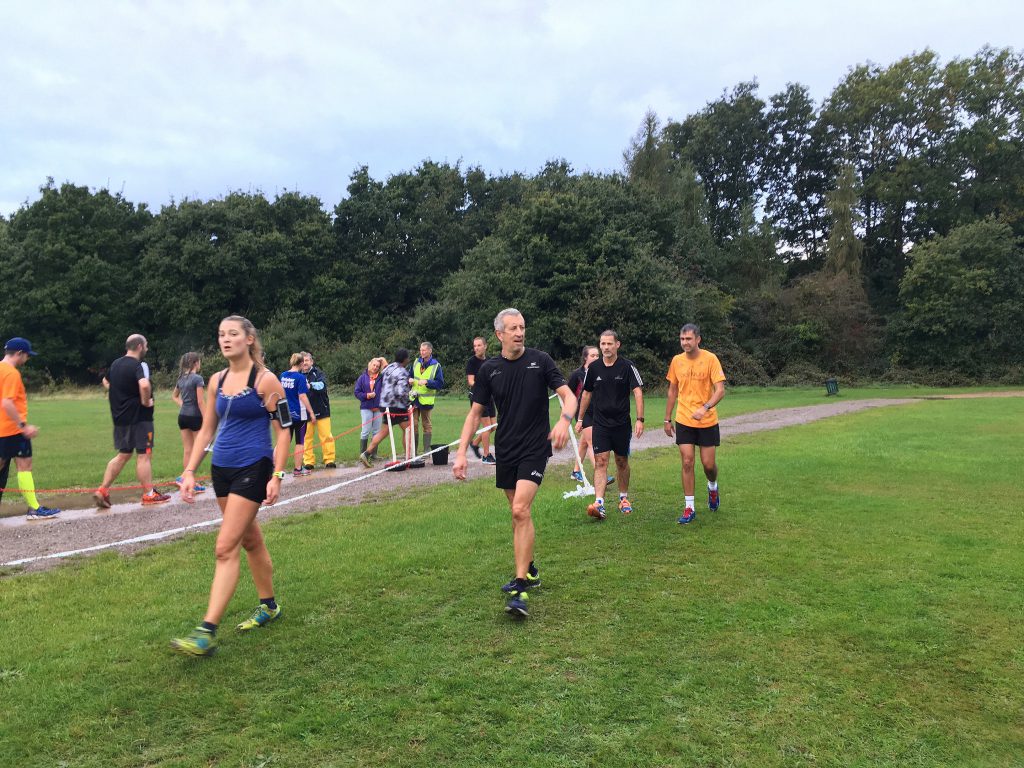 We waited for Rob’s wife, Kim, to finish, closely followed by Tamsyn, who, with just two weeks to go before her baby is due, must surely have been running her last parkrun for a while. After that we all toddled off to The Hawthorns for a nice, warming cup of hot chocolate. 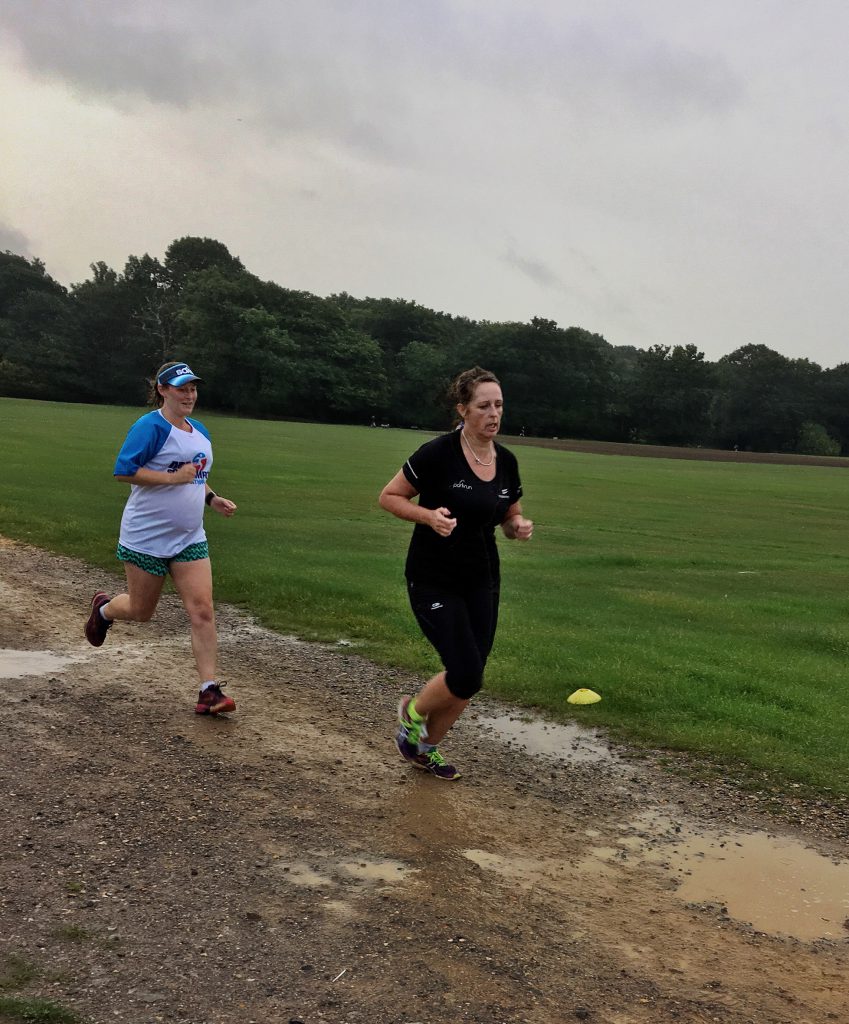 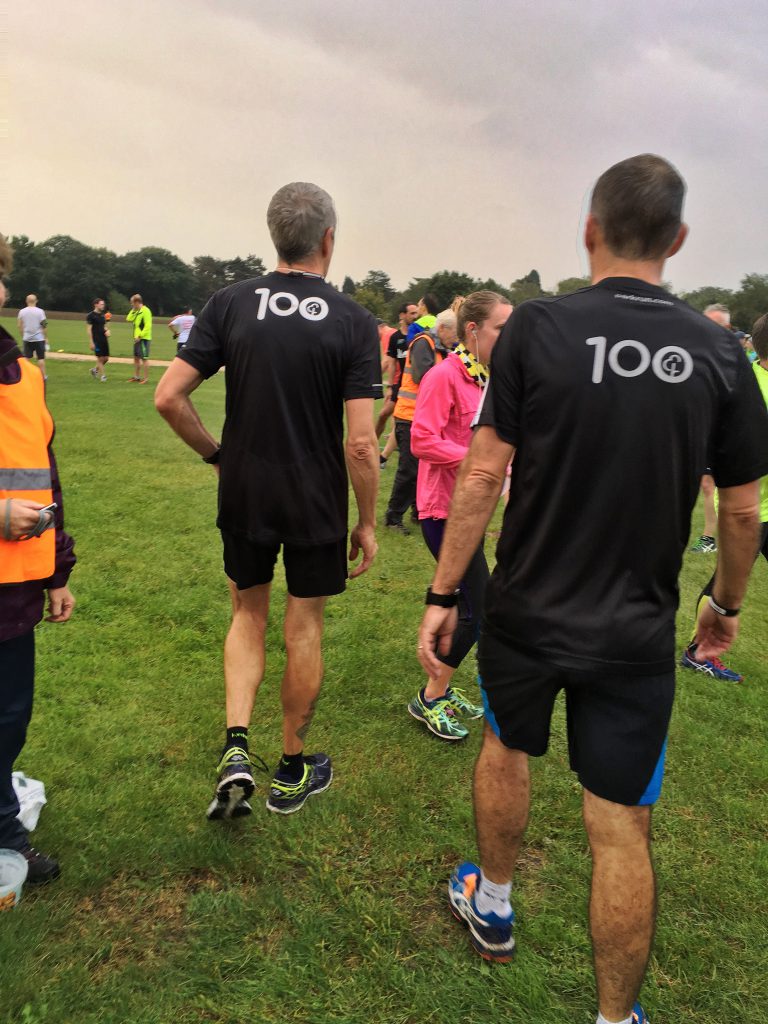 It may have been a wet, miserable Saturday morning on the Common but, as parkrun comebacks go, I think he did pretty well. It’s been a long, hard recovery  and I’m so proud of him for sticking to the plan and triumphing over adversity. Now all I have to do is stop him doing too much too soon. Short of hiding his running shoes I think I might have a problem with that.

4 thoughts on “A soggy parkrun comeback”