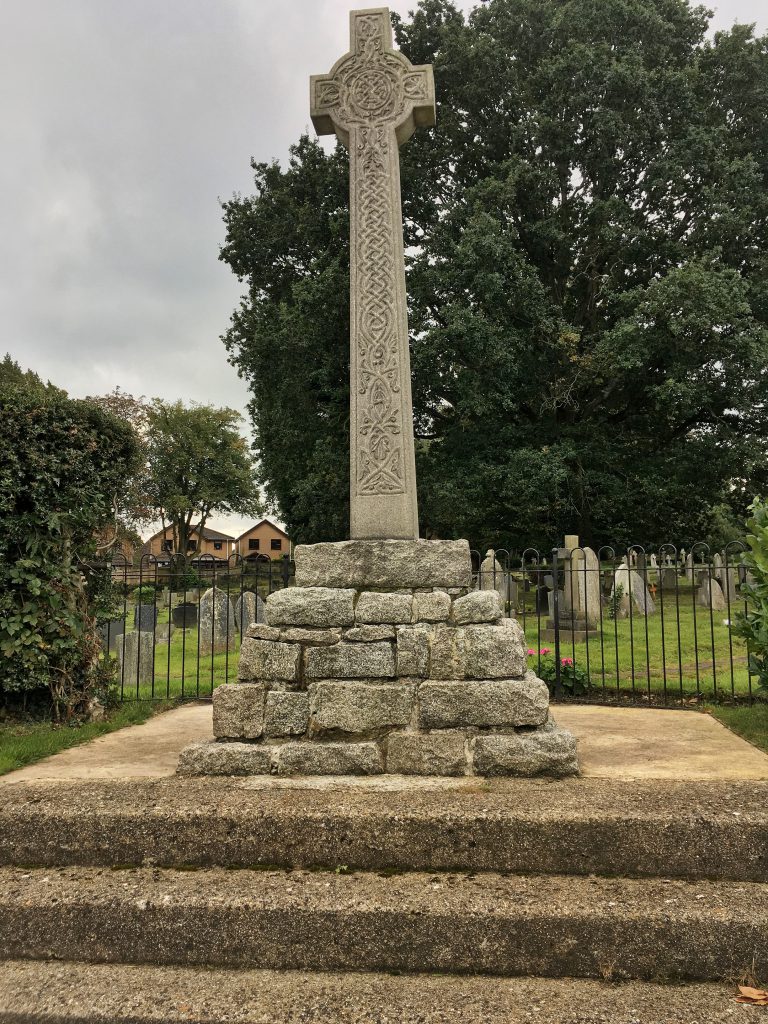 We left the West End Burial Ground feeling fairly pleased with ourselves. We’d found the grave we’d been looking for plus we’d  uncovered a few interesting stories and the odd mystery along the way. What more could we want from a walk?
“Shall we walk back through Telegraph Woods?” I suggested as we stood in front of the war memorial on the corner. Even when I told him it would be a steep uphill walk, CJ thought it was a good idea, especially as he’d never been to Telegraph Woods before. 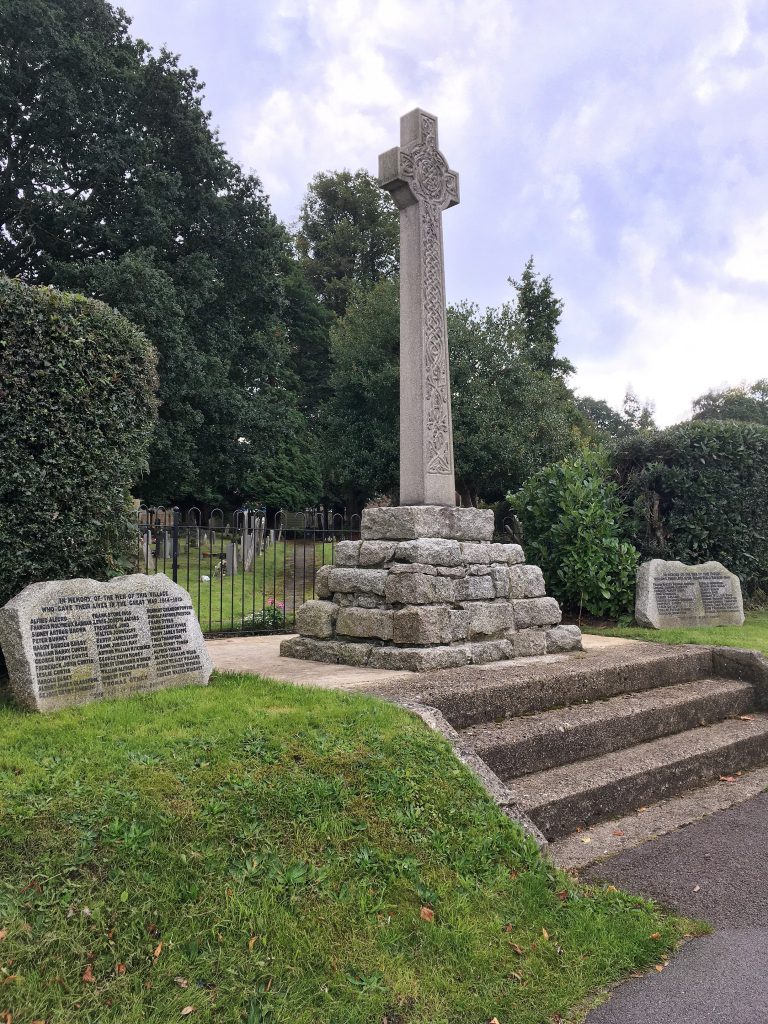 We stopped again outside the old National School building, now the Hilldene Community Centre but still looking very much like a school. West End village seems to have a bit of a history of recycling their old school buildings. The original school was built in 1838 a short distance away but, in 1903, as the village grew, this new, larger school was built and the old school became the Parish Hall. Now the village is even larger, yet another new school has been built on the other side of the village and the National School building has taken its turn to be recycled. It seems a far better plan than simply knocking things down. 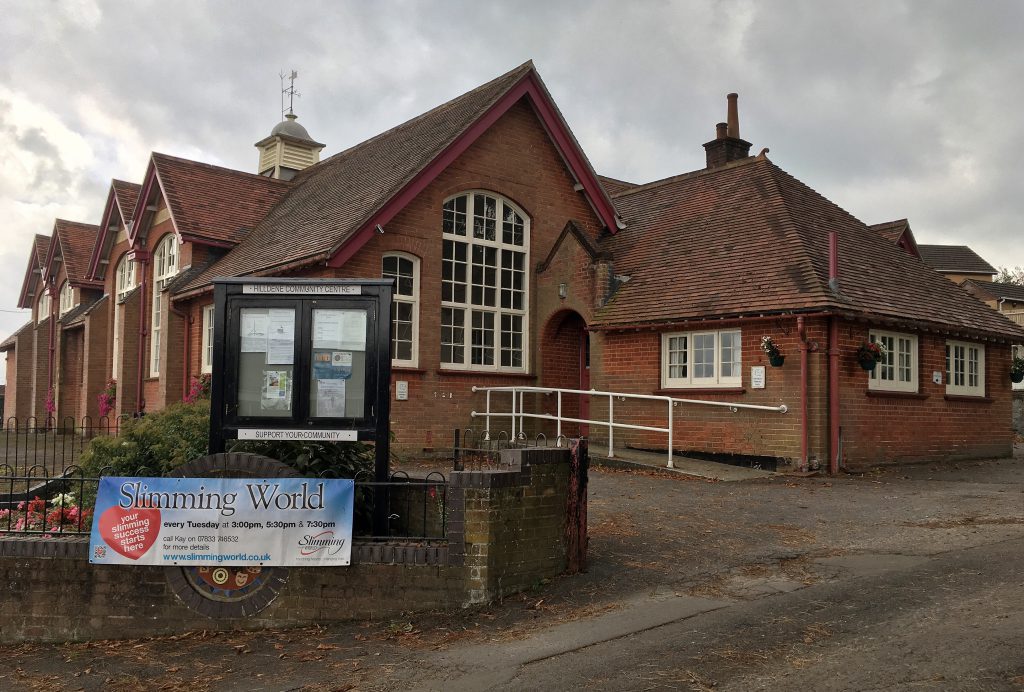 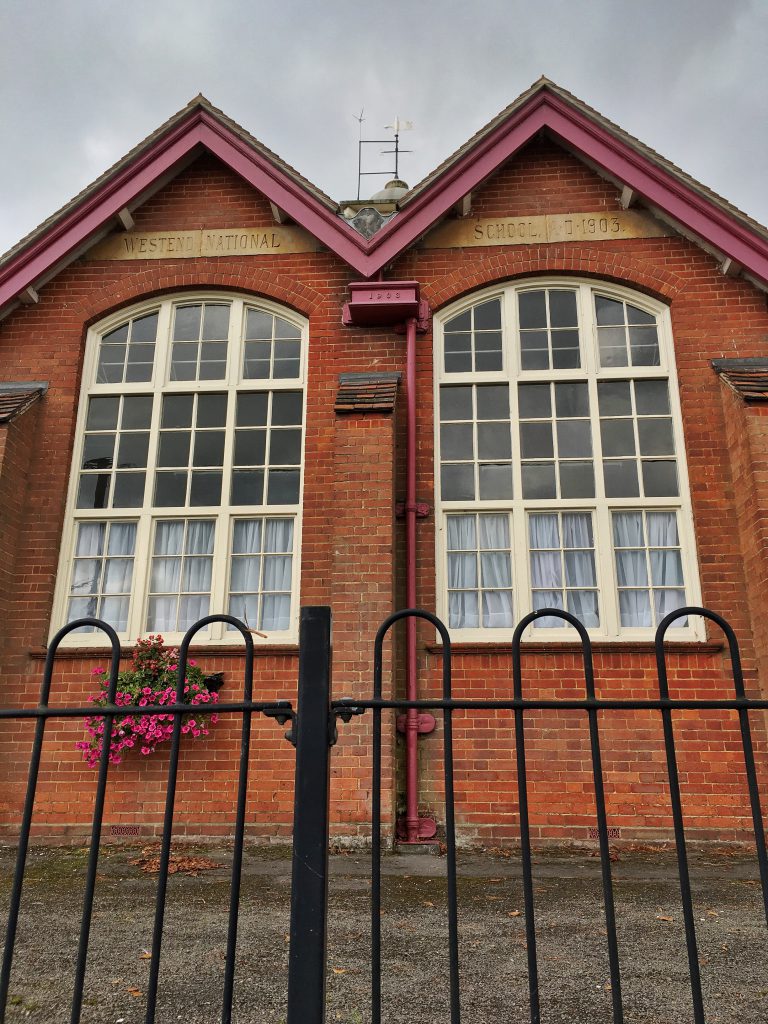 Not all West End buildings are safe from the bulldozer, or so it would appear. As we headed towards Telegraph Road a very ominous gap on the horizon came into view. Behind the hoardings around the old Moorgreen Hospital site there seemed to be a distinct lack of hospital building. It could have been an optical illusion and we had to turn off before we were close enough for photographs but it very much looked as if the hospital had been demolished despite what I’d been told last time I came this way.

“I’m not really sure how I feel about the hospital being knocked down,” I said as we turned into Telegraph Road. “Part of me liked the idea of it being gone. It was where Nana died after all and I could never pass it without thinking of the last time I saw here there. It’s never been a happy building, going from a workhouse to a hospital to Countess Mountbatten House where cancer patients went to die. Having said that, it did have a lot of history and I’m usually all for preserving history.”
“Maybe they haven’t knocked it down. We could be mistaken,” CJ replied. “We can have a proper look next week when we go to the Aegas for the zebra thing?” 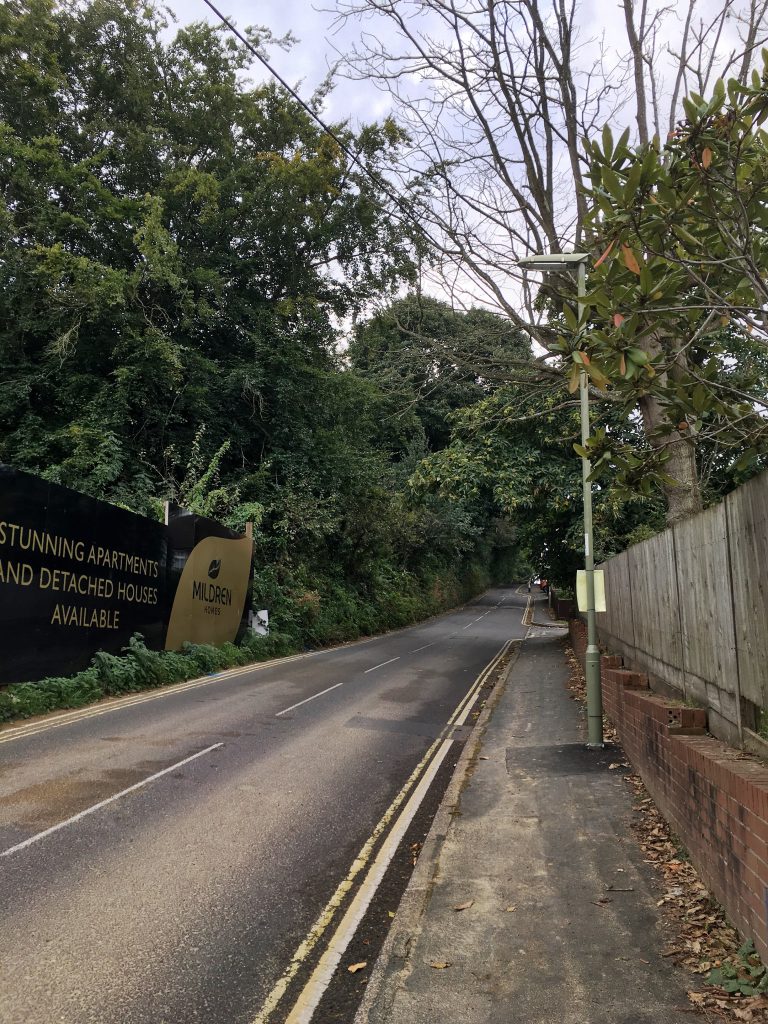 We’d been marching up the hill as we chatted and I’d slightly lost track of how far we’d come. When I spotted a track leading into the woods I was surprised we’d come to the entrance to the wood so soon. We crossed the road and set off along the trail but something didn’t seem quite right. 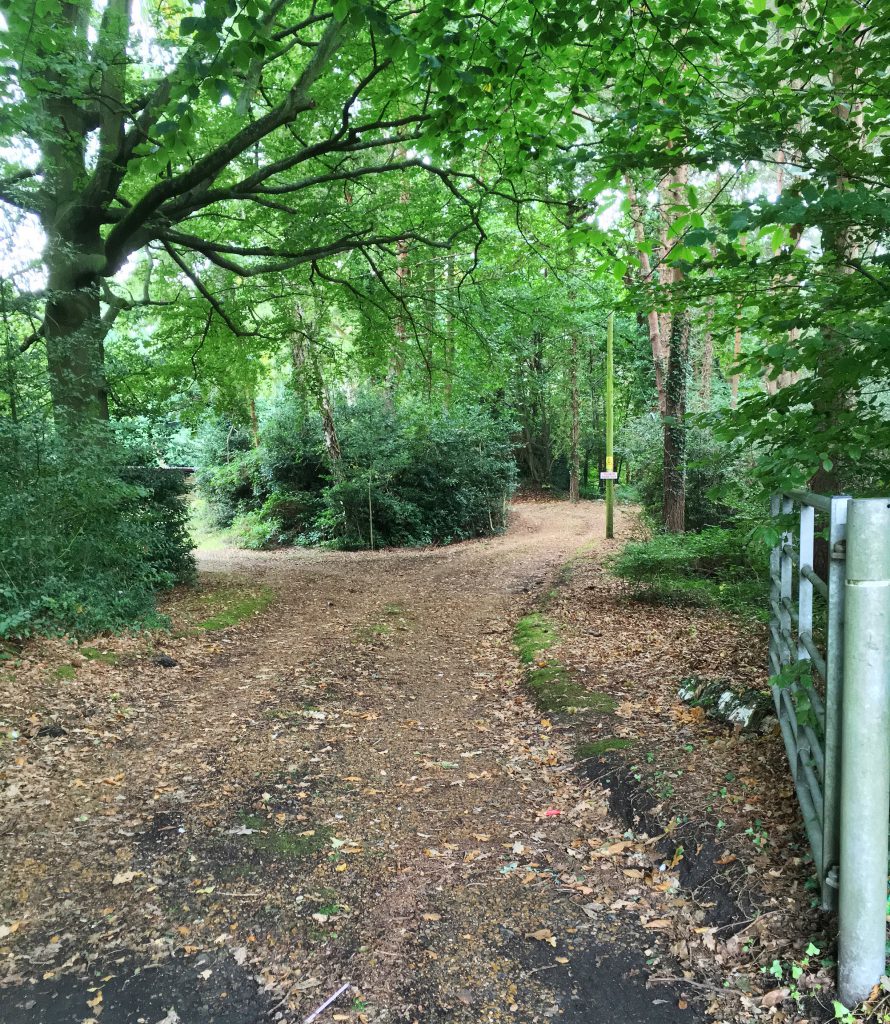 We hadn’t gone very far when I realised we’d actually walked down the drive of a house! Obviously this called for some turning back quick smart before we got caught trespassing.  On the way back to the gate we spotted an old Nissan Hut half hidden in the trees. The home owners are probably using it as a shed but it’s been such a long time since I’ve seen a Nissen Hut I risked a quick photo, or two. Then, of course I had to explain to CJ what a Nissen Hut was. 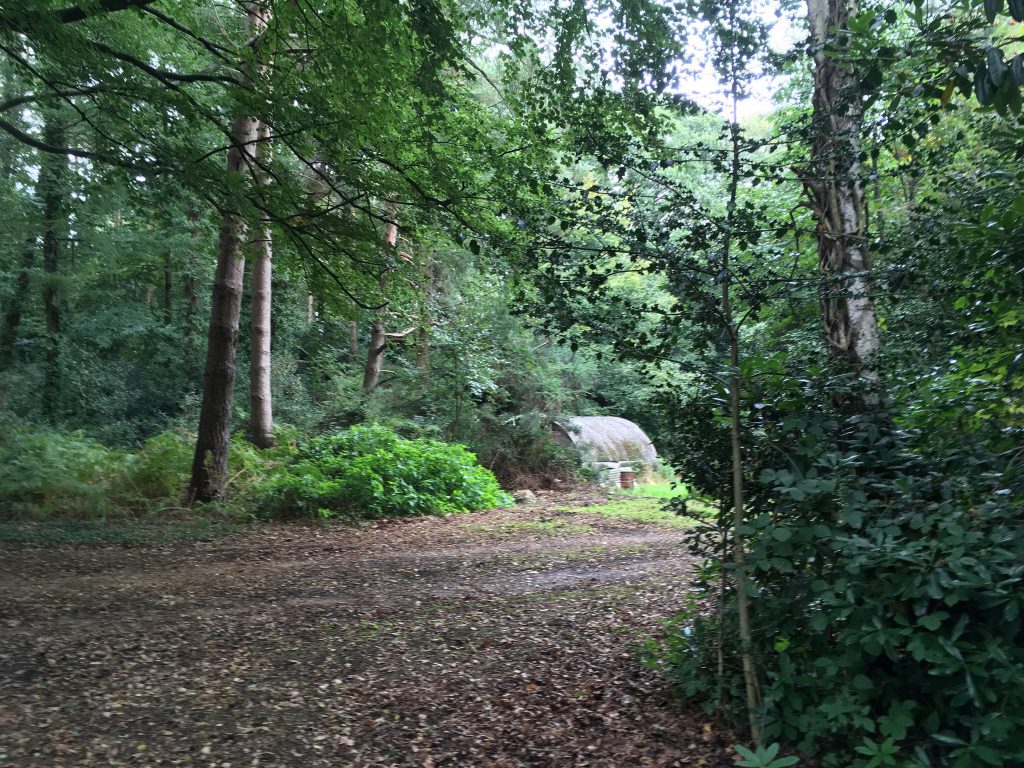 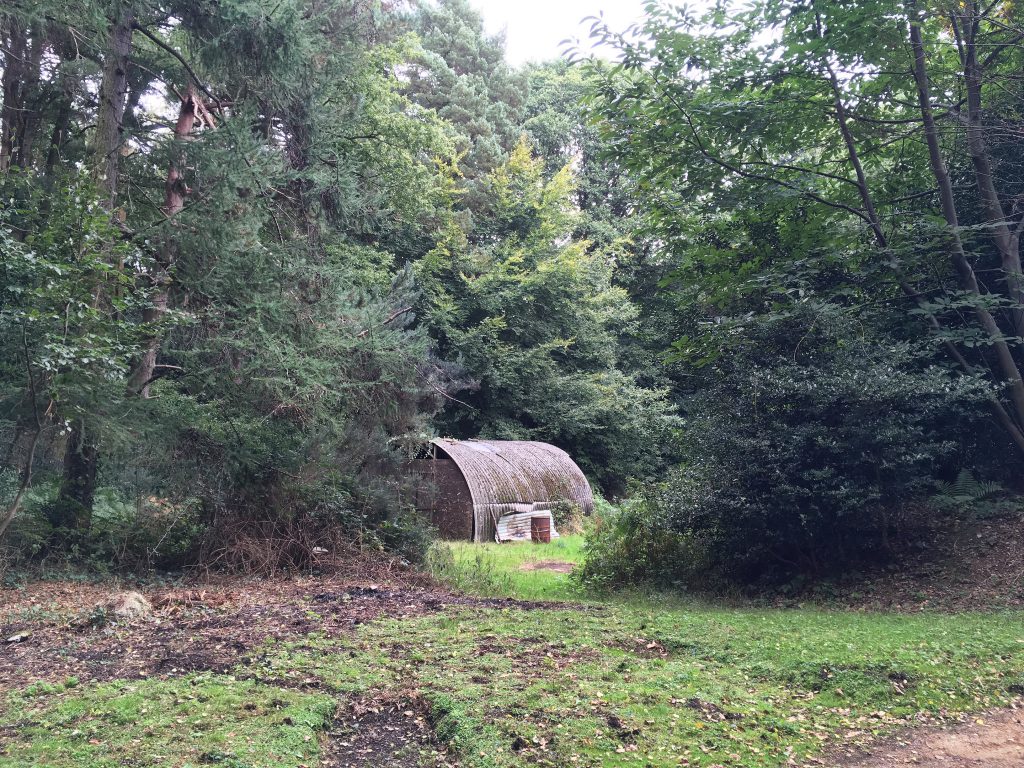 We carried on up the hill with me giving CJ a potted history of Major Peter Norman Nissen, a mining engineer and inventor, who came up with the design of these semi circular corrugated iron structures in 1916. Over a hundred thousand were made during World War I and even more during World War II.
“The old Andersen Air Raid Shelters people had in the gardens were very similar in design,” I told him. “At least the one in next door’s garden when I was a child was, except the corrugated arch was covered with soil. We had a Nissen Hut as a classroom at my senior school too. I think it was the English room for a while and I remember it being freezing in winter despite a very ancient and noisy boiler. Of course, they’ve built nice new classrooms since then.”

By this time we’d reached the real entrance to Telegraph Woods, at least the bottom one, and we set off into the trees. Unlike my last visit, when it had been eerily silent and rather spooky, there were birds singing today. Rather than follow the main path I led CJ off to the left and an area I hadn’t explored before. We hadn’t gone very far when I spied a shelter ahead. 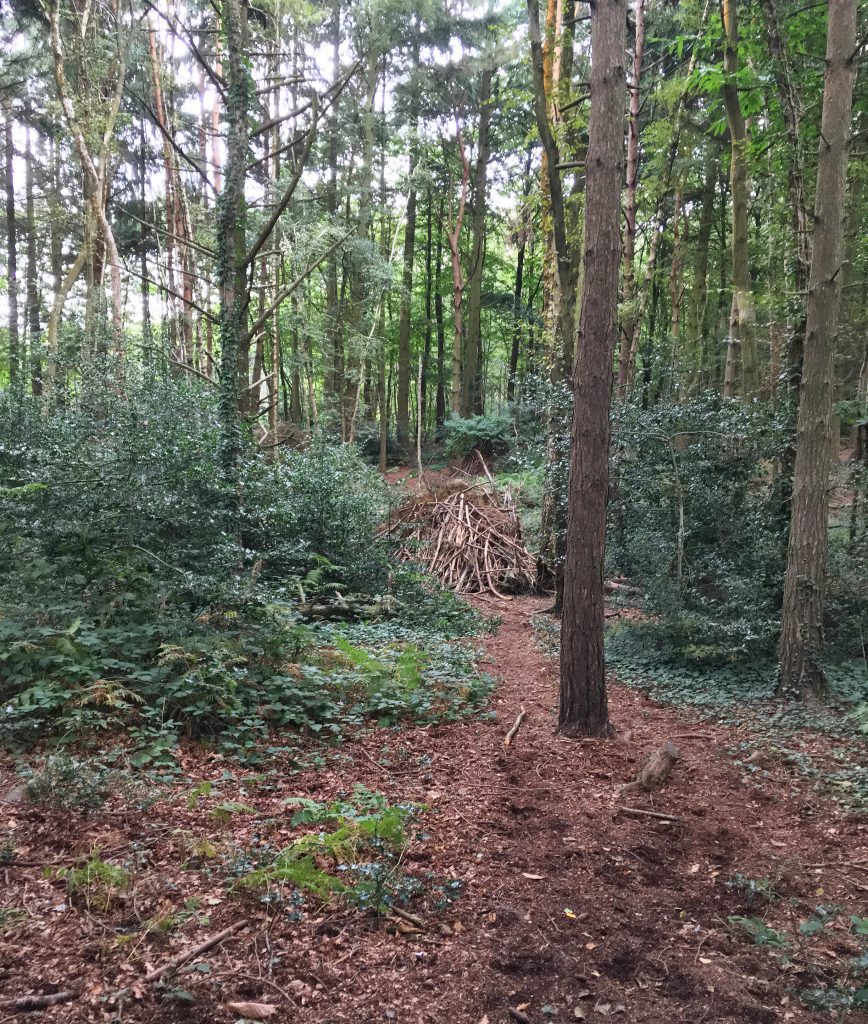 There seem to be quite a lot of these odd, teepee like, shelters in woods all over the place. This one was a little different as one wall had been made from the upturned rootball of a fallen tree.
“I suppose it was less work,” CJ commented.
We peeked inside and saw a makeshift seat using a large log and a few scattered beer cans. Obviously someone has been using it as a drinking den. Close by CJ found the handle of a knife. From the words embossed on what was left of it, it looked as if it once belonged to a Scout. Chances are the Scouts built the shelter but I doubt it was Scouts drinking beer inside. Of course, I could be wrong. 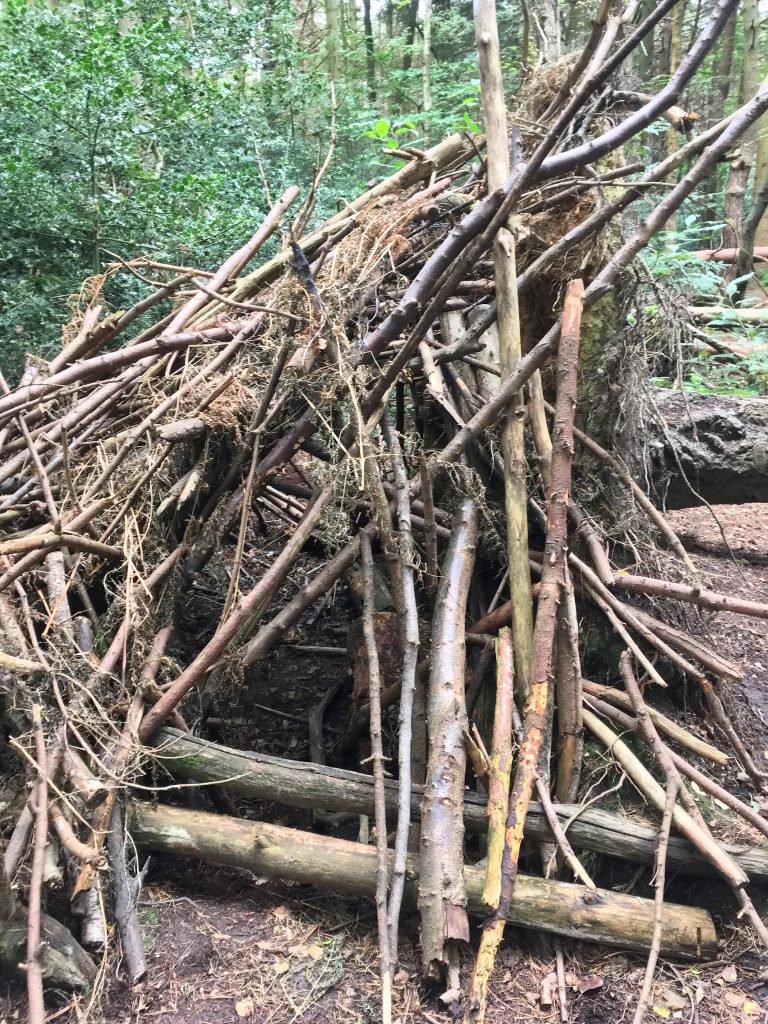 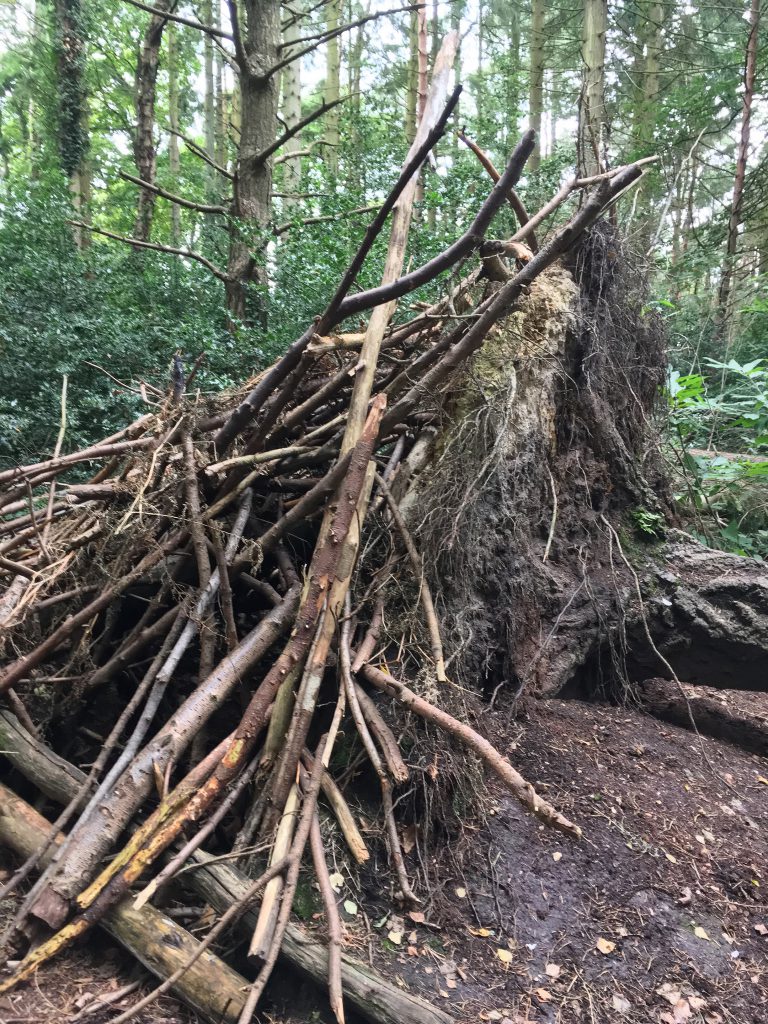 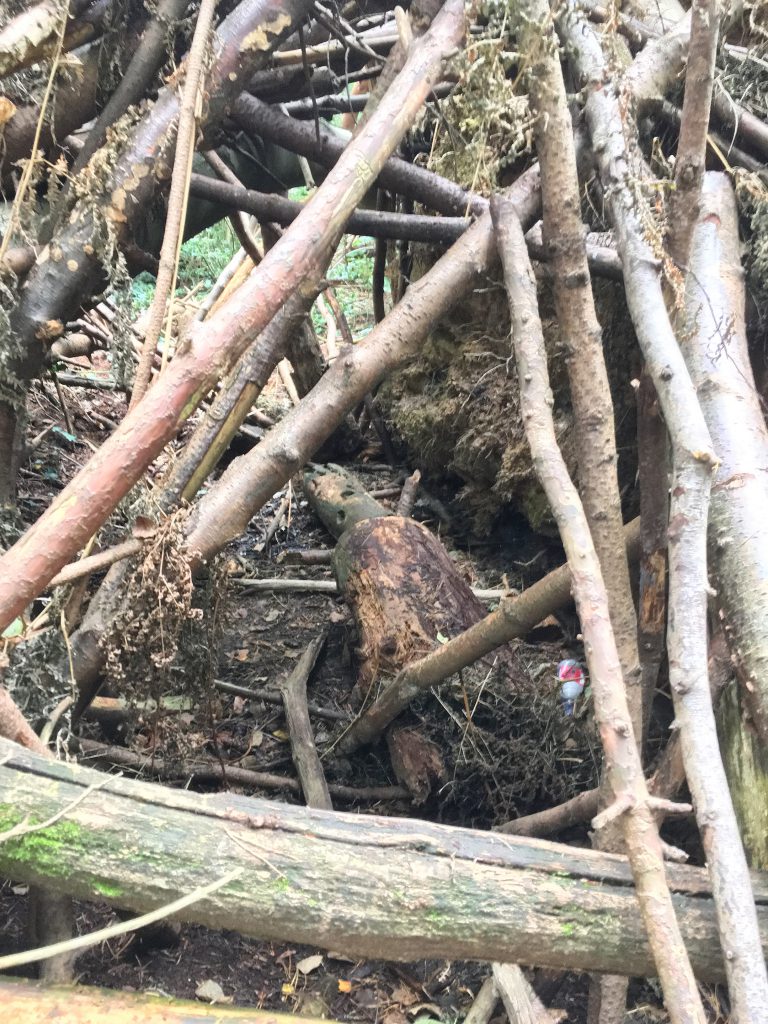 We left the shelter behind and headed back towards the path. On the way we found another, smaller shelter. Perhaps this is an area where the Scouts practice their survival skills? They certainly have a ready supply of fallen branches to work with. 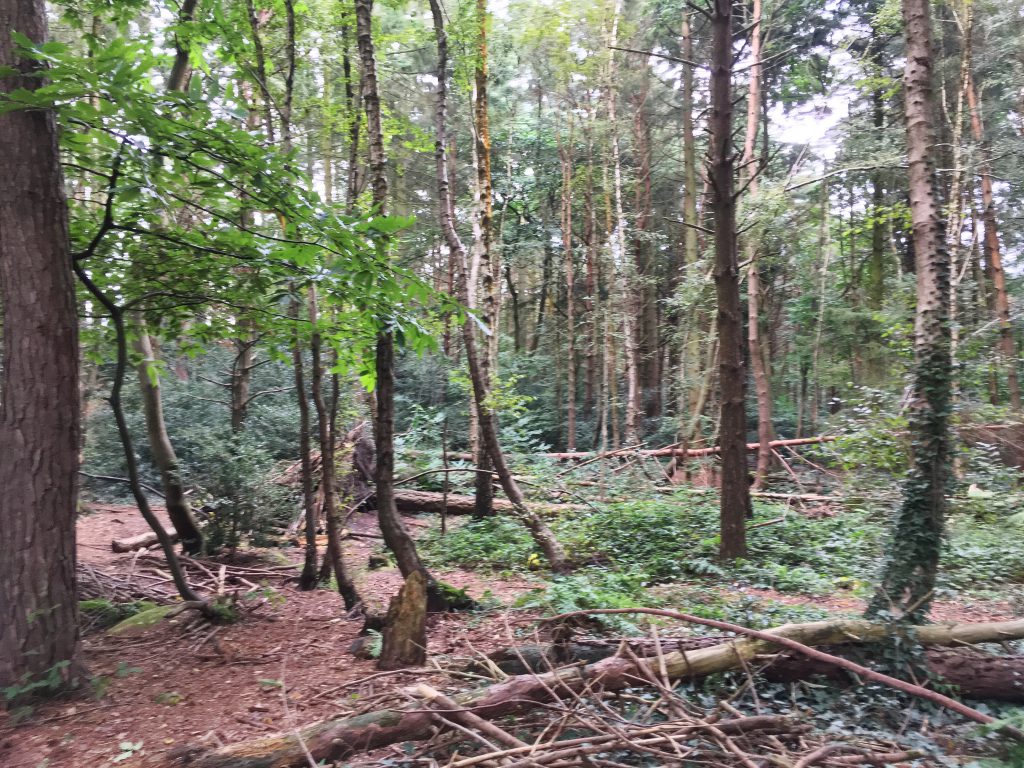 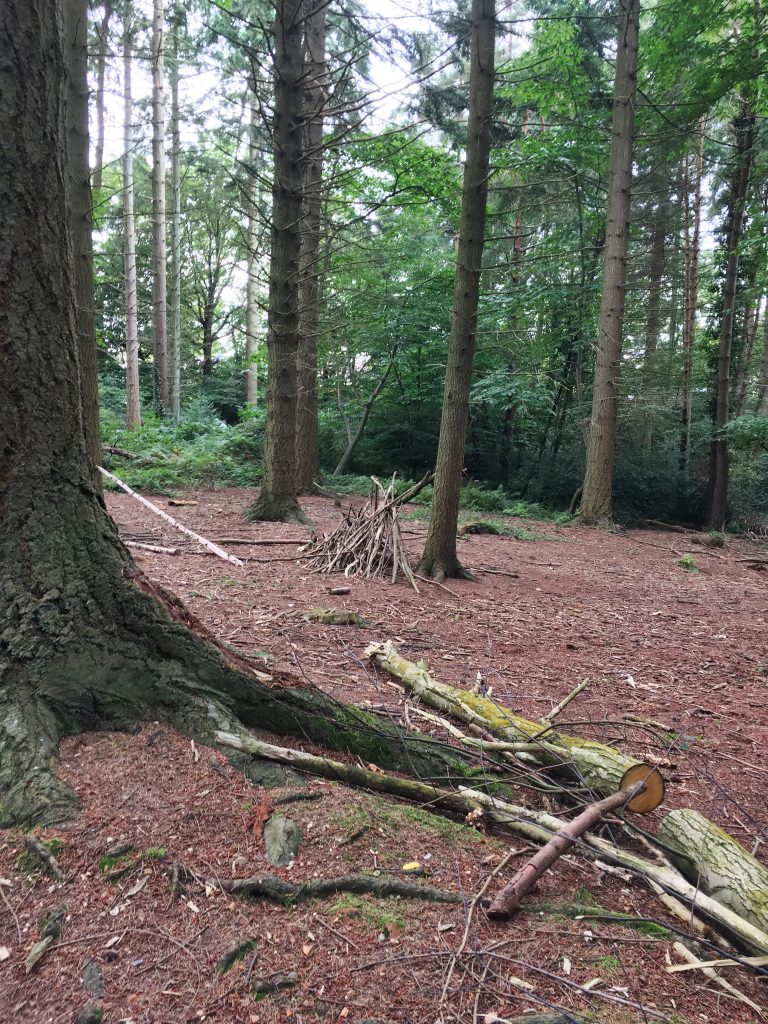 When we reached the main path I explained to CJ that heading left would eventually take us to the Aegas Bowl and going right would take us near to Moorhill Road. As we were heading towards home we’d be taking the latter route. Our visit to Telegraph Woods had been short and sweet but at least this time it wasn’t spooky. 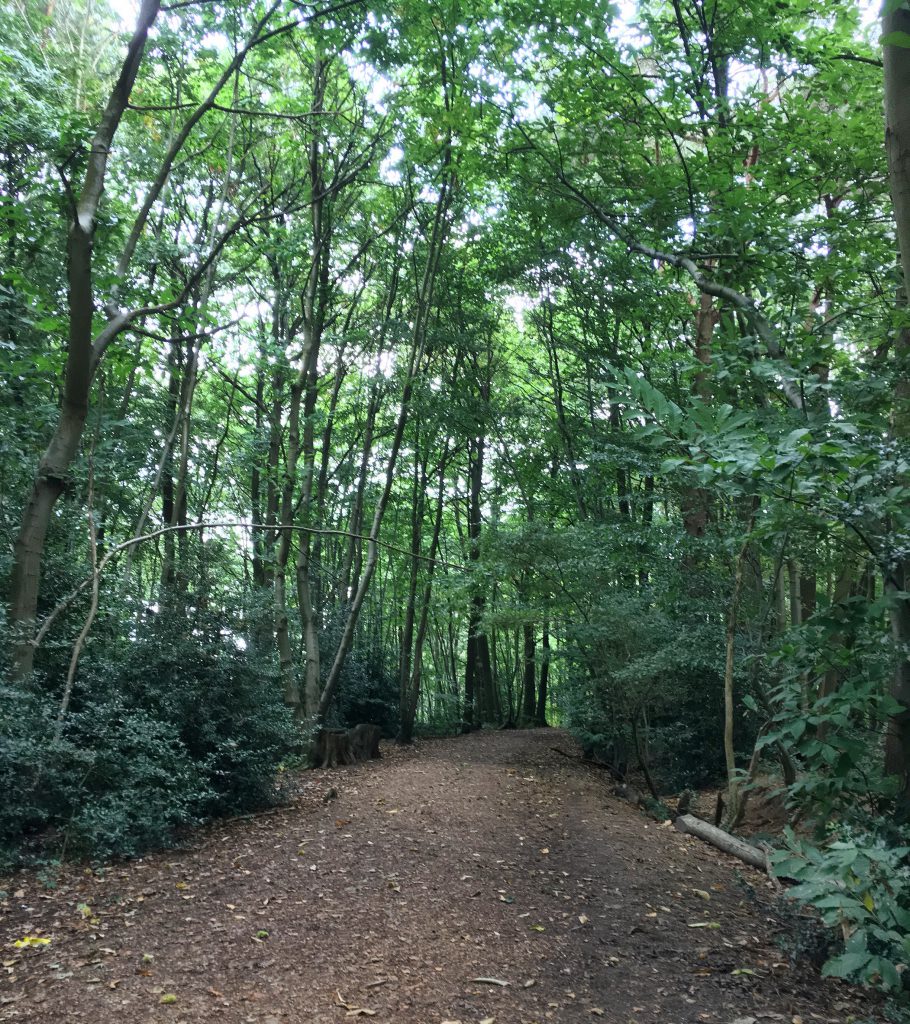 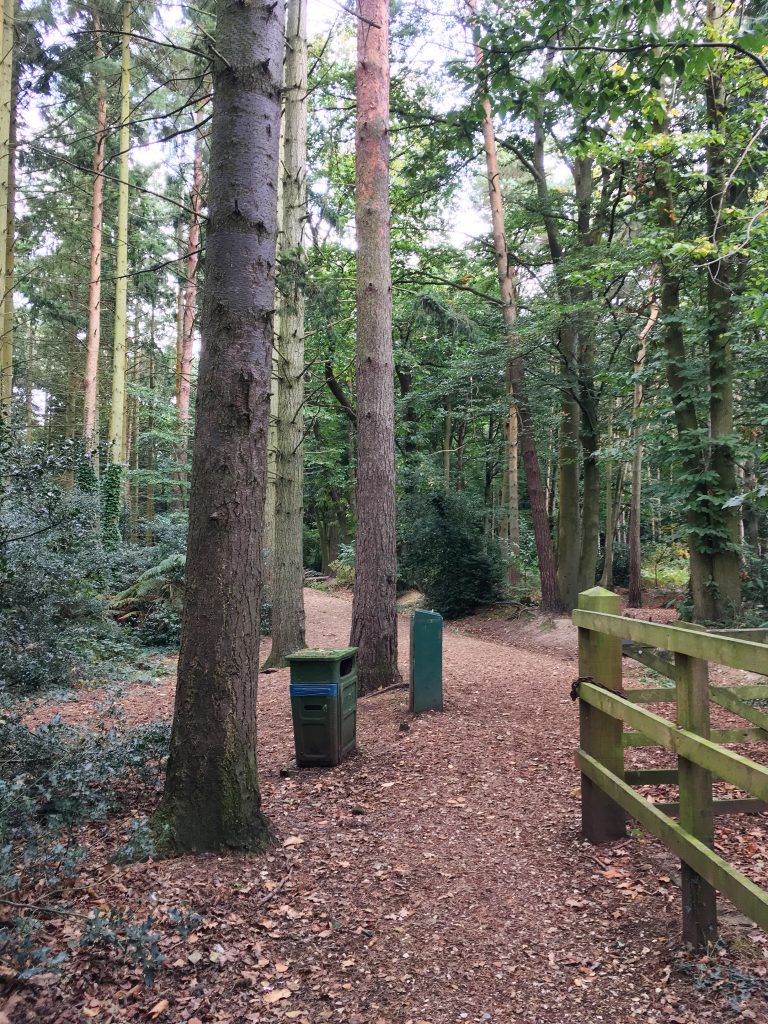 Across the road, as we entered Harefield, I noticed the intriguing gate I saw a while back. There was obviously a trail on the other side of it and I was curious about it. In fact I had an idea where it led. When I suggested we explore it CJ jumped at the chance even when I told him it might lead nowhere at all and we’d have to retrace our steps. He’s his mother’s son for sure. 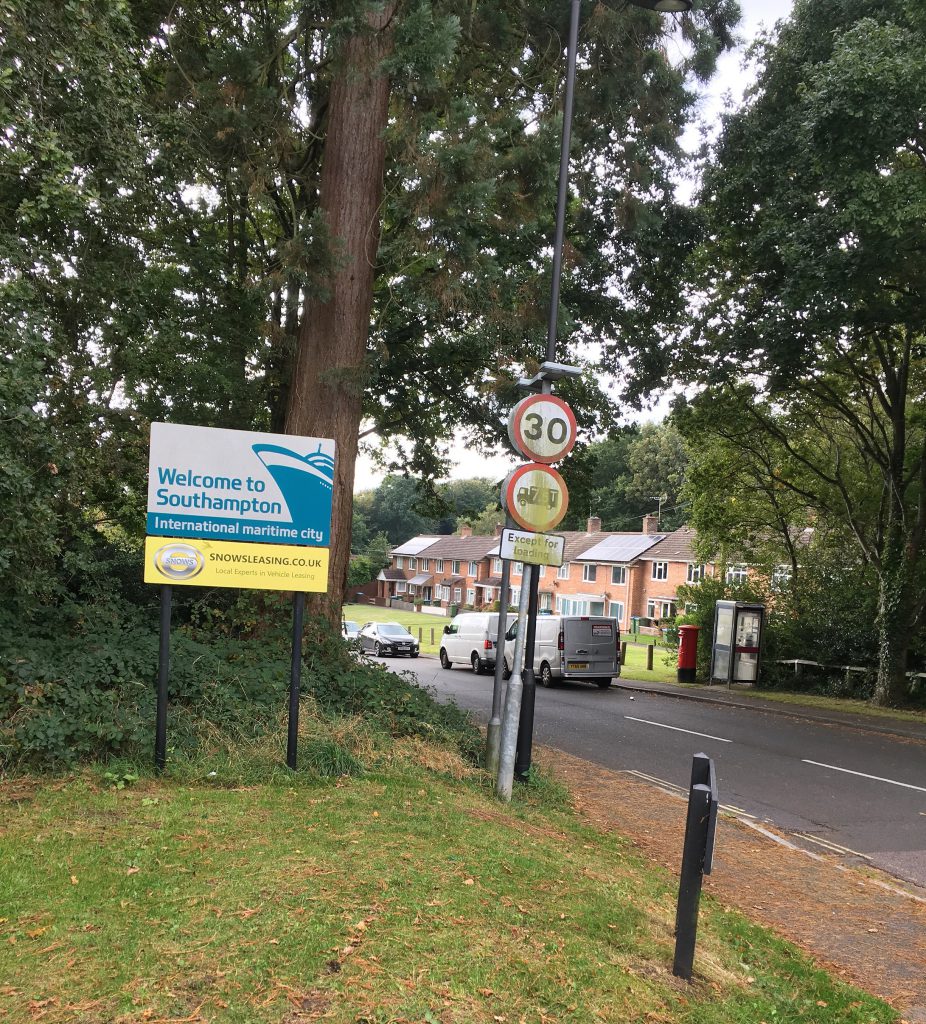 Beyond the kissing gate we found an interesting looking trail. So far so good. We followed it, half expecting it to end at any moment but it didn’t. As far as I could tell it was roughly following the line of Moorhill Road, just as I thought it would. A little way along we found an old tree stump. Something about its gnarled and twisted form captured my imagination.
“It looks like the kind of thing that should be carved into a sculpture,” I said. “Maybe a frog or a big fat toad.”
CJ looked sceptical for a moment. Perhaps he thought his mother had finally lost her marbles. Then he walked around it.
“Actually, I think you may be right,” he said finally. “Definitely a toad.” 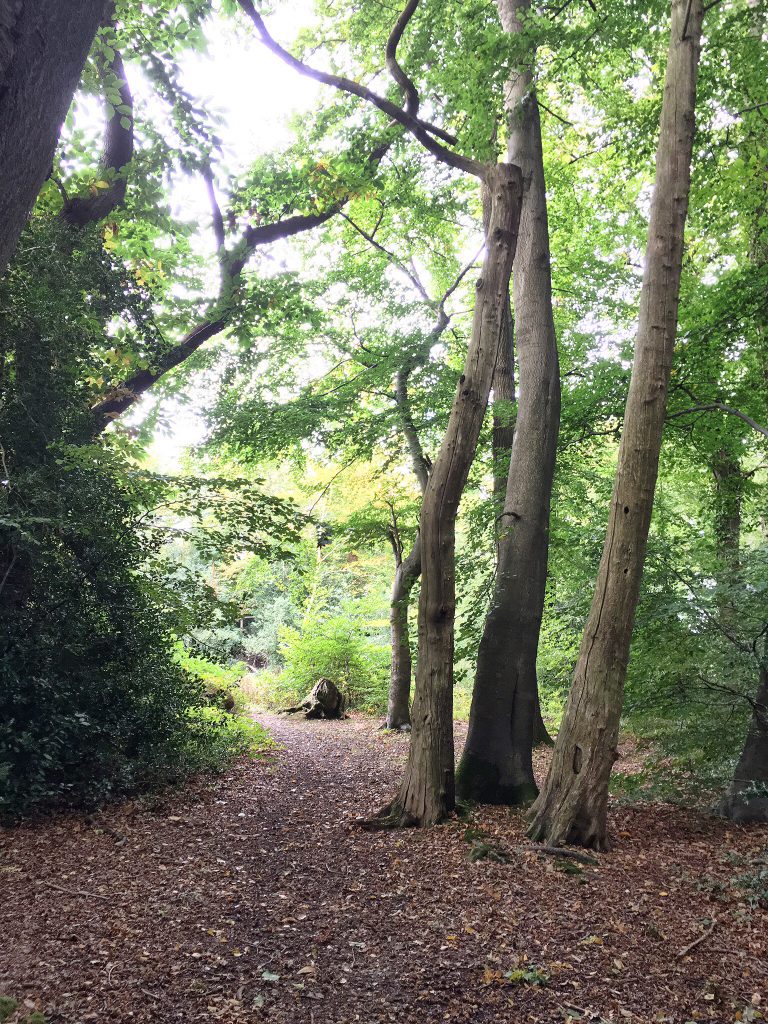 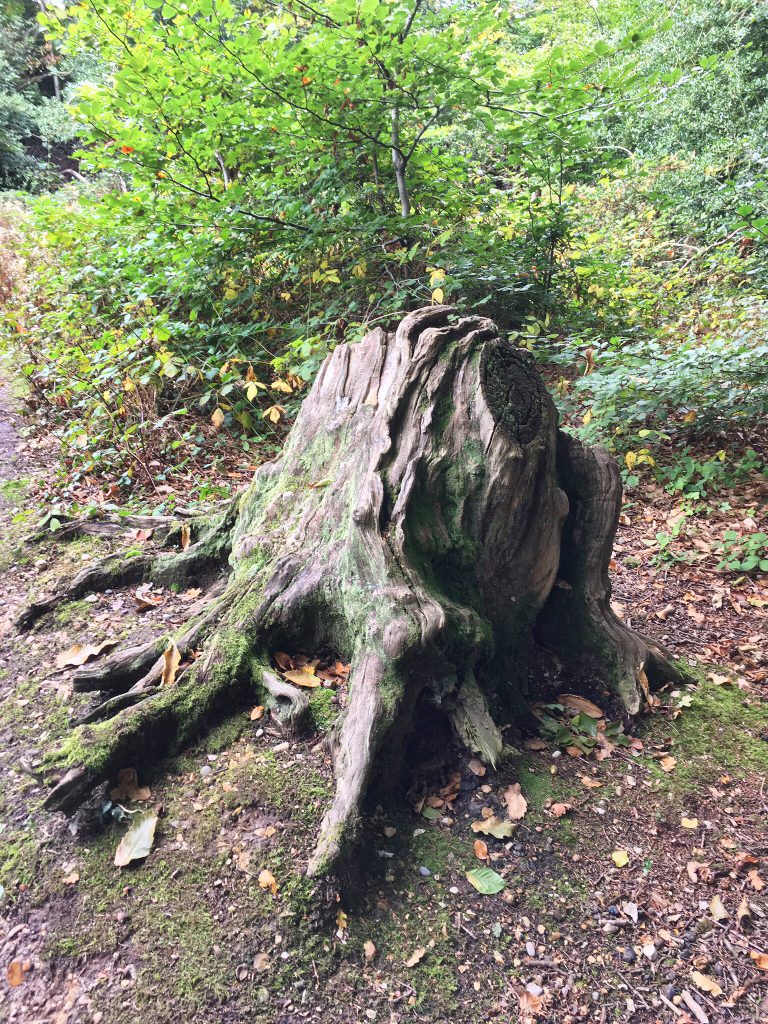 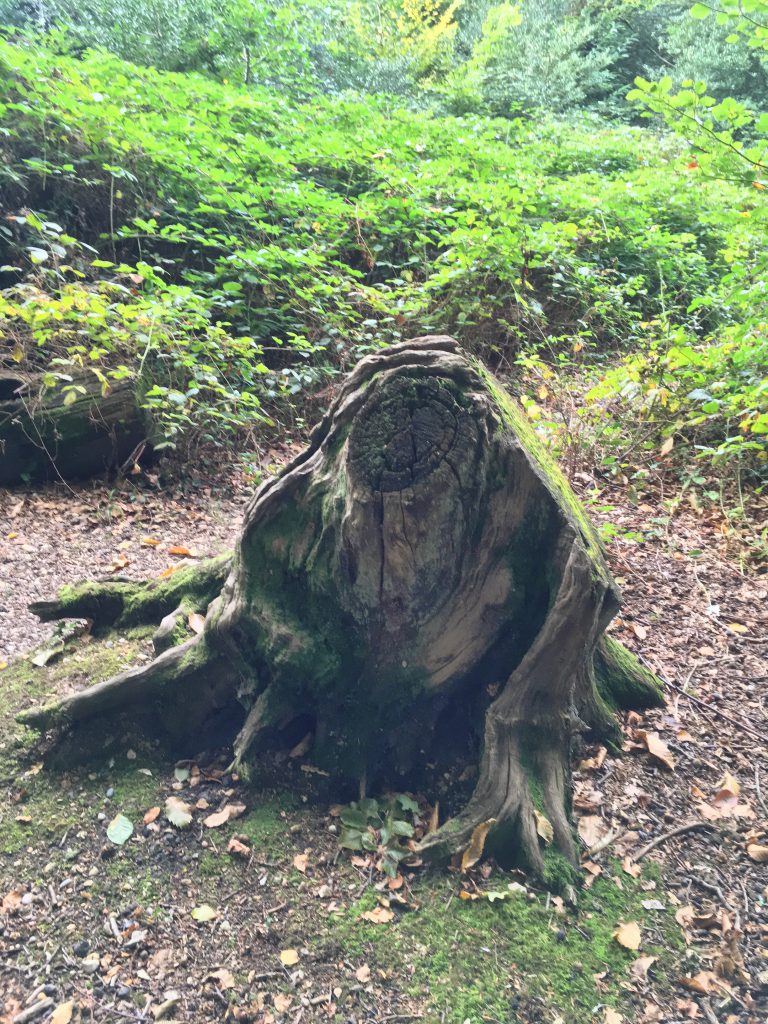 The trail went on and on. It really did look as if it would take us back to West End Road as I thought. Every so often we came to a clearing. There was one hairy moment when the track divided and we had to choose which path to take. We chose wrong but, luckily, our diversion ended up going in a wide circle back to the original trail adding a little distance but nothing more. 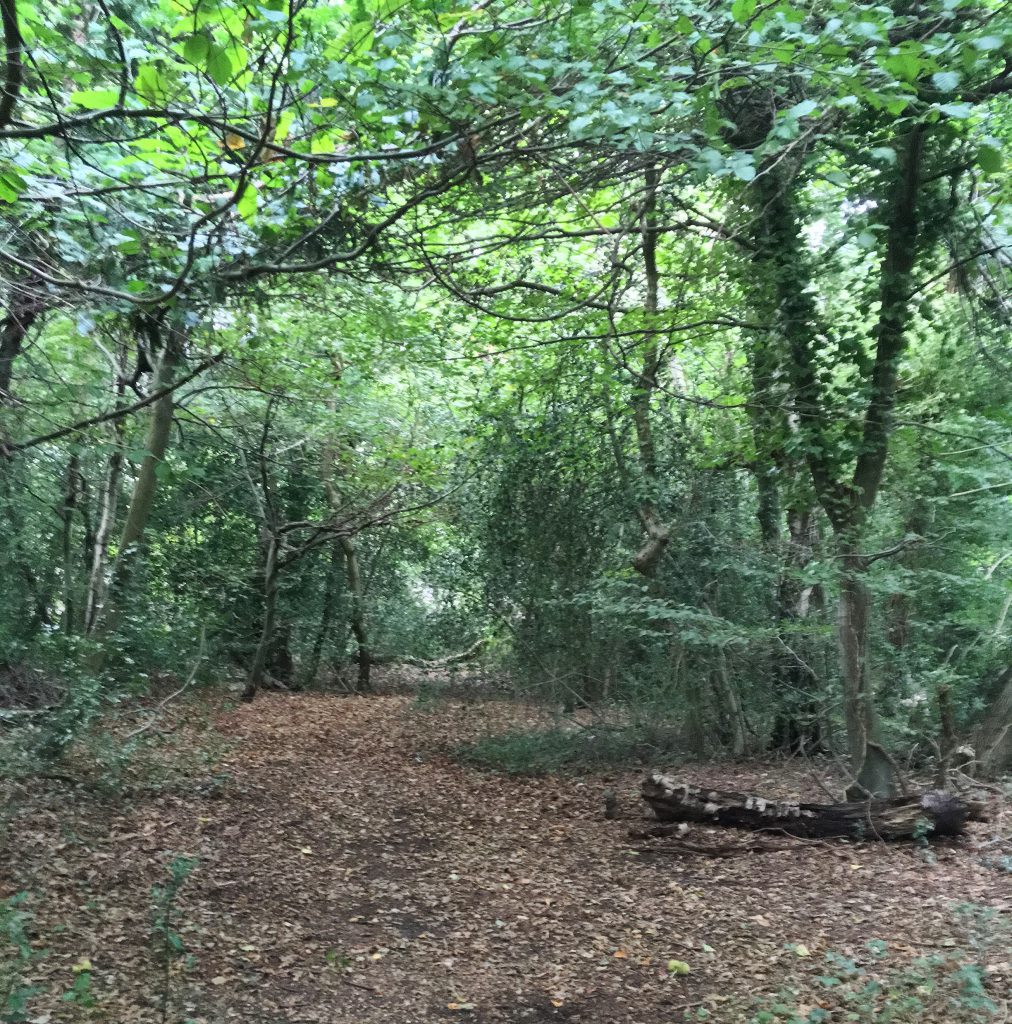 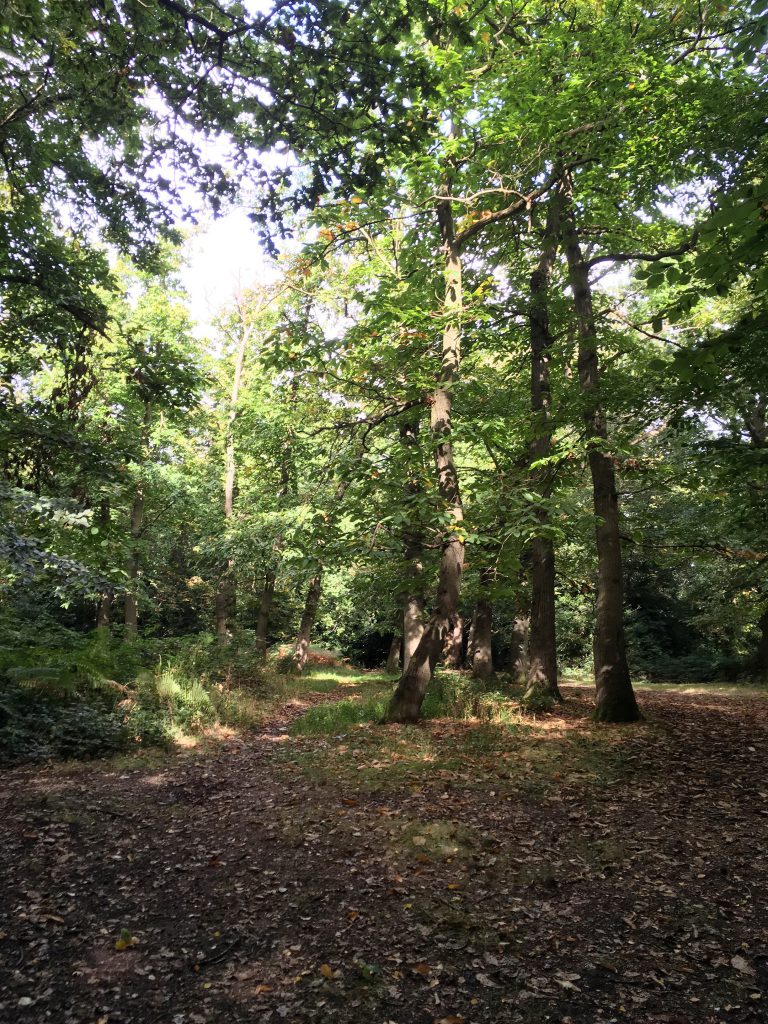 Not long after we rejoined the main trail we came to another kissing gate. On the other side was West End Road not far from the junction where we’d stopped to look at St James’ Church earlier. As short cuts go it hadn’t really saved us any time or distance but a walk in the woods is infinitely preferable to a walk along a busy road or through a housing estate as far as I can tell so I’d call it a result. 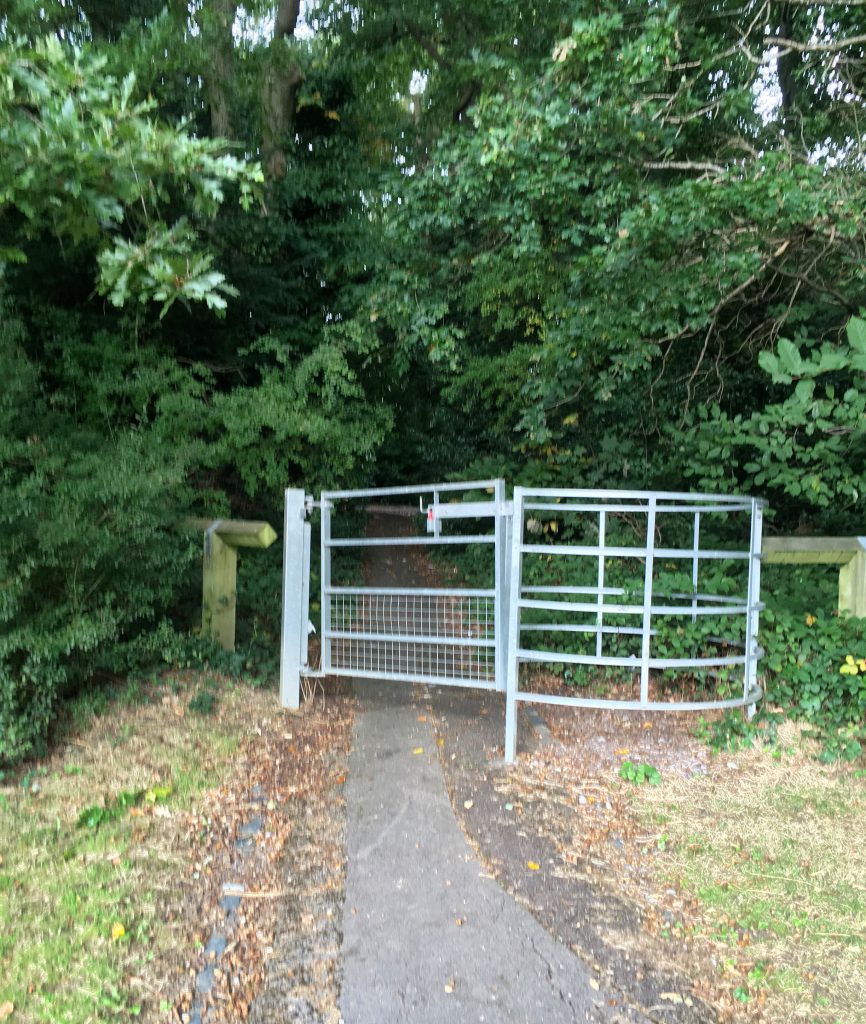 We still had a bit of walking to do before we got back home but we passed the time talking about the trail we’d found and wondering how many other hidden trails and cutways there were we still didn’t know about? Perhaps my next mission should be to see how many I can find? 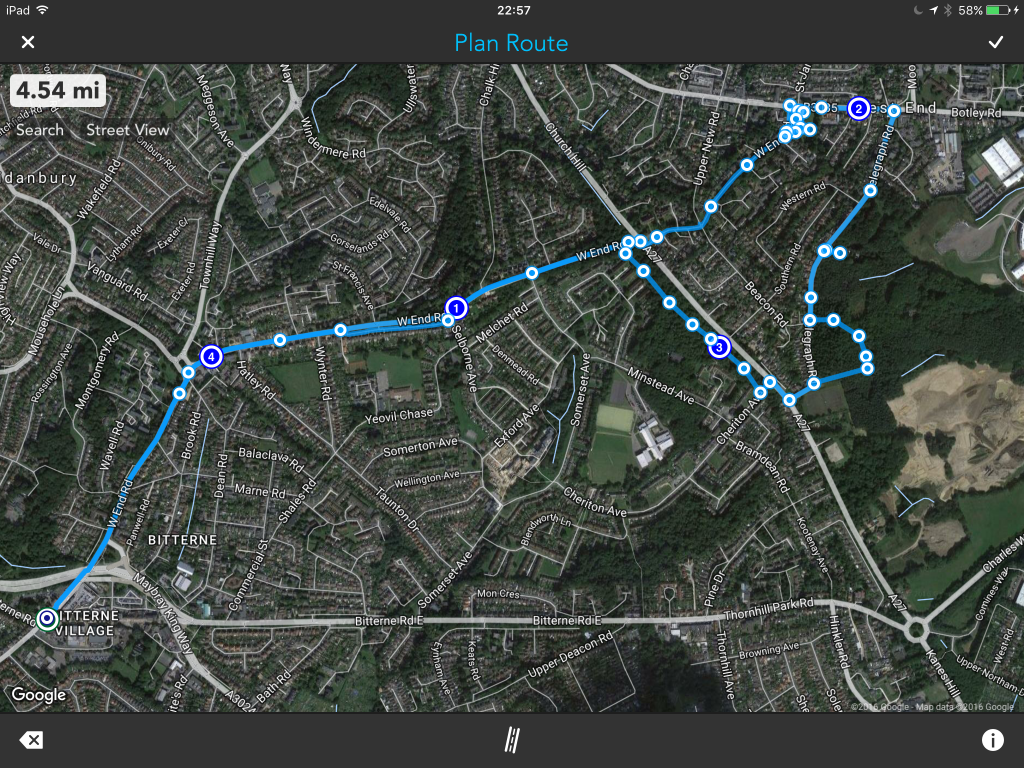 10 thoughts on “Telegraph woods and another unexplored path”