Early 2014 seemed to be mostly about interviews. So many I look back now and can hardly remember them all. There was one I really liked the sound of in a research unit at the hospital as PA to several professors working on cancer research. At least it was only a short interview. No tests, tricks or hoops to jump through. After that there was a tour of the office so I got to meet the people I would be working with. They seemed a cheery bunch which was nice. The only real fly in the ointment, if I did get the job, was the travelling. The hospital is surprisingly difficult to get to. I was even thinking about buying a bike if I got it. They said they’d let me know the next day so, while I waited I went for a little walk.

Waiting to hear about job interviews is a nerve wracking business so, rather than sit around biting my nails and worrying, I went off into the frosty morning for a little walk. Sometimes the best walks are the ones you don’t plan, no objective, no distance to cover, just wandering and exploring. That was exactly what I did this morning.

There are a few little cut ways on the map that I’ve been itching to check out for a while but, not knowing exactly where they lead, I’ve passed them by on other walks. The first looked as if it led past the allotments and up towards The Castle. In actual fact it didn’t, the path runs behind some houses for a while but there is a locked gate at the end. I suppose this is to stop people wandering onto the allotments and stealing things.

So it was back to the road to climb the calf aching hill up to The Castle. I had climbed from a low point of thirty nine feet above sea level close to my house right up to one hundred and ninety seven feet at the top of Woodmill Lane, all in less than a mile. Believe me, that is some climb! I stopped at the top to survey the view. What goes up must come down though so, after a brief pause, I started off down the long, winding road towards the river.

There’s a trail that runs behind Riverside Park called River Walk. Quite why I’ve never walked that way before I don’t know, other than the fact I wasn’t sure where, or if, it came out. On a long walk the last thing you need is to have to back track for miles because you come to a dead end. Today I turned down that trail. Almost at once I saw a large tree down, several trees as it happens. It seems as if there isn’t a park or green space in the city with a full compliment of trees right now. The first part of the path was lined with daffodils, still speckled with drops of melting frost. Some were palest cream with bright yellow centres others the more traditional gold. Wordsworth came to mind with his host of golden daffodils. The path was quite muddy and slippery but the flowers put a smile on my face. 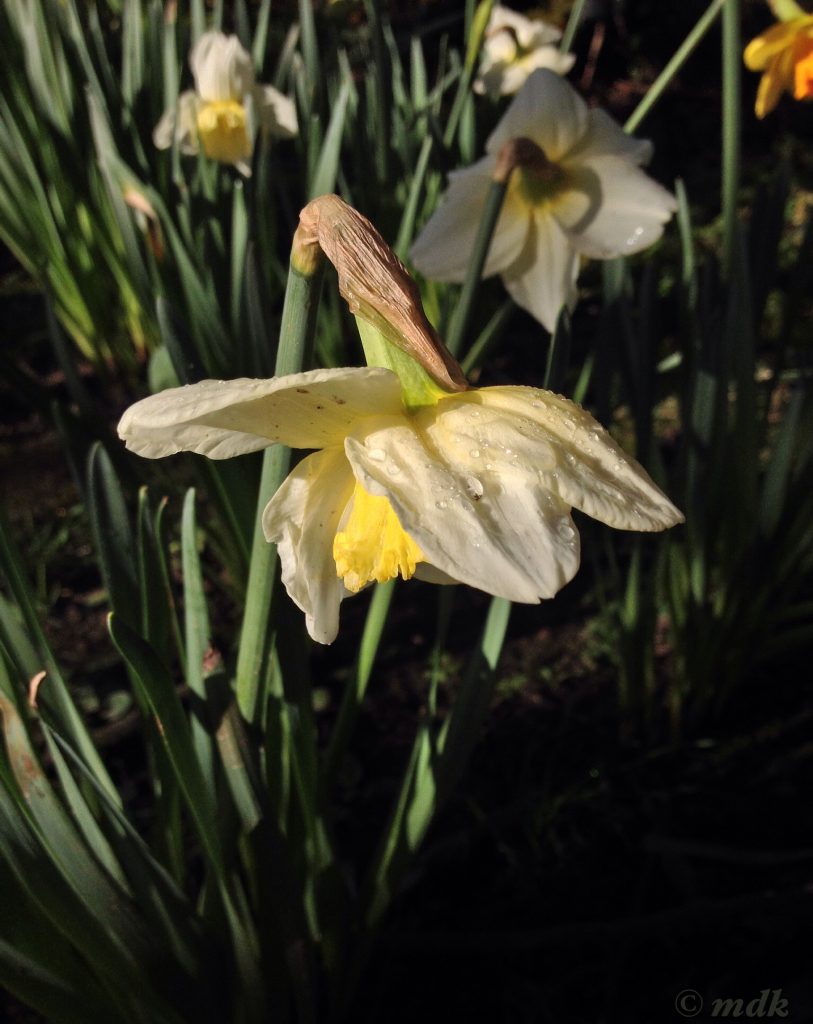 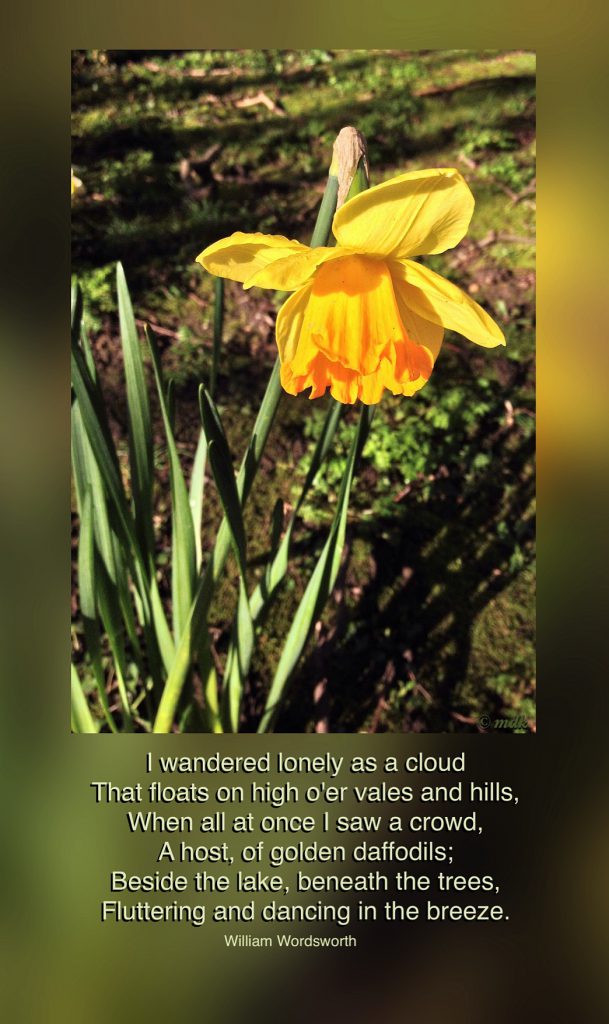 Further on I passed a huge rootball sticking up into the air, another fallen tree. Just after this the path changed, now one side was bounded by garden fences. There was a huge muddy puddle but, as with the path at Monks Brook, someone has kindly placed some wood to one side to help people cross. I took full advantage of it. From then on it seemed to be nothing but fallen trees, one after the other. These were large, mature trees and, rather than being uprooted they mostly seemed to have been snapped by the gales. The edges of the path were piled high with logs and splinters of wood. Once upon a time when everyone had open fires I imagine it would have all be taken and burned by now. At one log pile I stopped to take a closer look. I tried to count the rings but got muddled although I think the tree must have been close to a hundred years old. Such a shame, to have grown for so long and then be unceremoniously ripped apart by the wind. The further I went the more tree remains I passed. When I saw a huge stack of logs ahead then, just behind it, a very large tree across the path, I thought I might have to turn back. The trunk was as high as I am tall, maybe a little higher. Ok so that’s not very high but high enough. When I got closer though, I could see a gap between the tree and the fence just about big enough for me to get through. Lots of little flies were buzzing about, maybe the smell of freshly sawn wood attracted them. 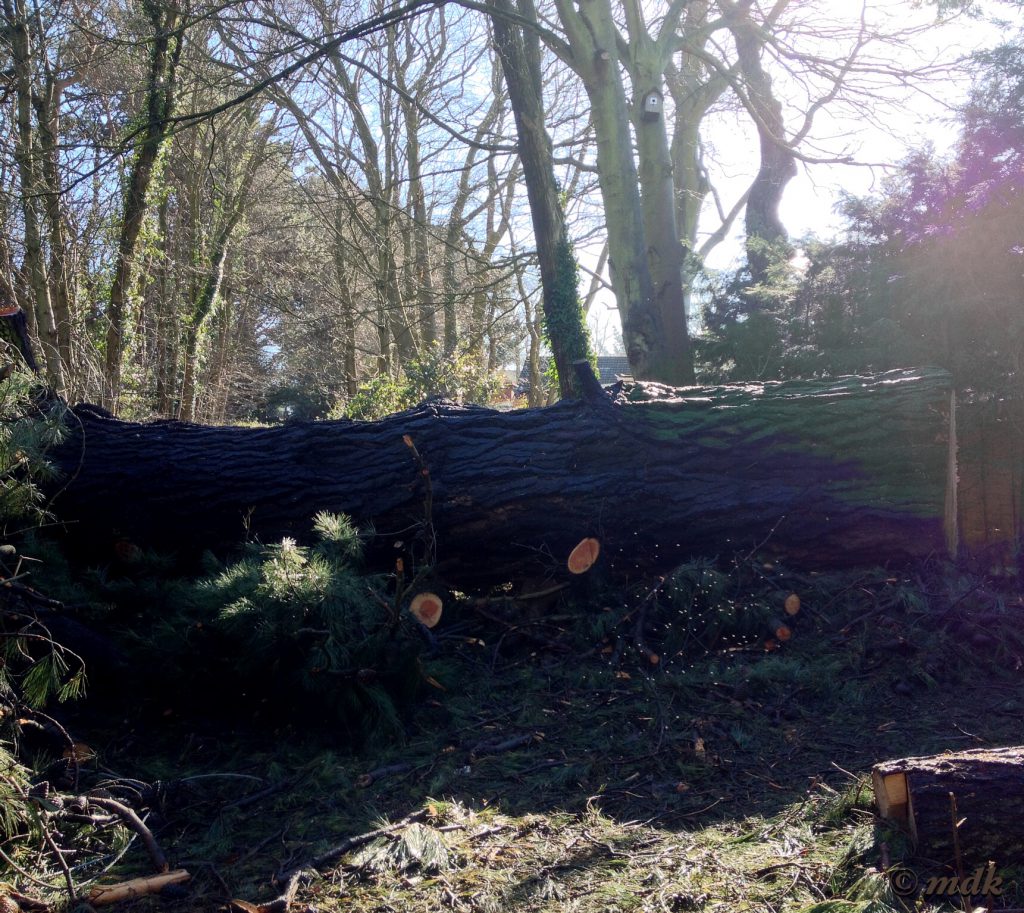 Before I went on my way I stopped to look back at all the logs. What a massive tree it must have been. The stump was big enough to make a nice table. I ran my fingers across the cut wood of the trunk as I passed, drinking in the smell of pine and feeling a sense of sadness at the death of what must have been a beautiful tree. The bark was so thick and the tree looked so strong I wondered for a moment why it had been felled. Once I’d passed though I could see the top half of the tree had been snapped by the gales. It was probably a danger. Next winter it will be worth returning to see if any fungi have taken residence. 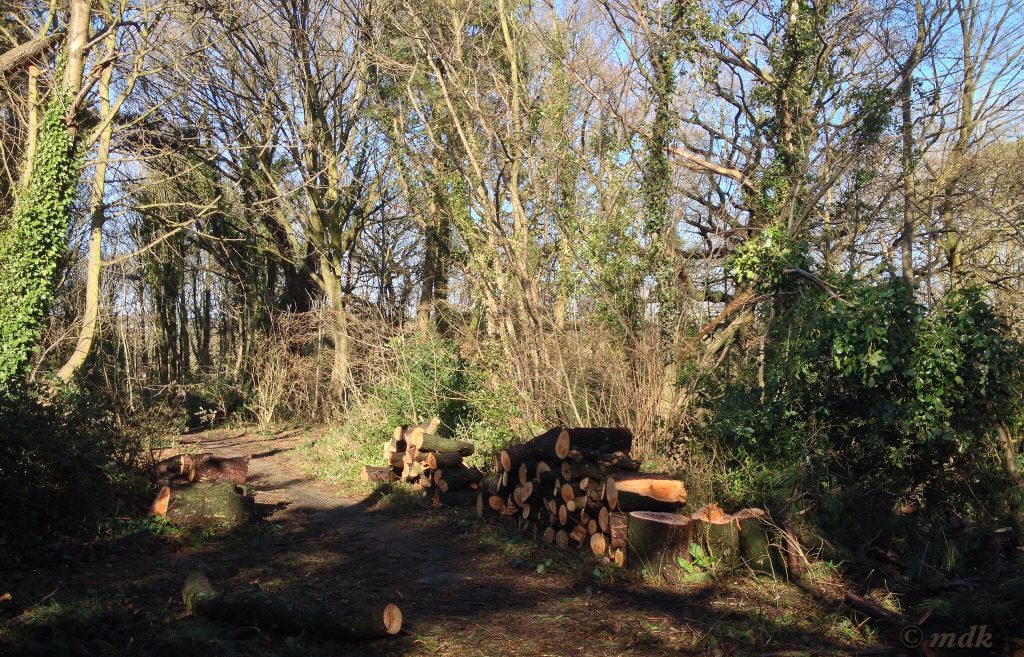 Not long after I saw a wire fence up ahead. Would I be able to get past or would I have to turn back? Yet more branches were piled close by, some branches still bearing rows of fir cones. Perhaps the cones will open and seeds will germinate making the most of the extra light provided by their fallen parent. I’d like to think so. While I stood pondering this and wondering what to do about the fence I noticed a man and a dog on the other side. A few moments later he was coming towards me. “Good morning,” he smiled.
“Can you get through that way?” I asked, before telling him about the large tree across the path.
“It belongs to the Gregg School so technically it’s private property,” he told me, ”but, every time they mend the fence, someone breaks it again.”
He told me it was possible to take a longer route and avoid trespassing but I said I’d take the risk, seeing as the fence was already broken.
“Where does it lead?” I asked.
“The playing fields behind Cutbush Lane. They’re very muddy,” he looked pointedly at my boots. They do look quite nice at a glance I suppose. “Are they Ugg boots?”
“No, they’re Skechers and they’ve seen their fair share of mud, not to mention a bit of wading through the river,” I laughed.
“Ah, Skechers are good. I’ve got some myself,” he said.
Then he told me how the land here was owned by a farmer living in Allington Lane. Apparently managing all the fallen trees is costing him so much he has put it up for sale on eBay. The price, one pound. How tempting! Then again I don’t own a chain saw. We both went our separate ways and, after a little trespassing, I could see the playing fields. Some trees right on the edge of the wood were full of blossom. By the time I noticed I was too far away to see what they were, probably blackthorn I should think. The sky was a beautiful blue although there was still a nip in the air even at well past ten o’clock. In the undergrowth there were still pockets of frost amongst the rough grass. I stooped to look a little closer at the sparkling ice crystals and the bubbles of water where the frost had begun to melt. There has been precious little frost this winter and, while I might not be a fan of the cold I quite like to see the frost. The fields, when I reached them, turned out to be less muddy than expected and I wondered what the man with the dog would make of the mud further along River Walk. Hopefully his boots were up to the job. These are the same fields I’ve looked at through the fence as I walked along Cutbush Lane. They always seem to be filled with dog walkers and today was no exception. 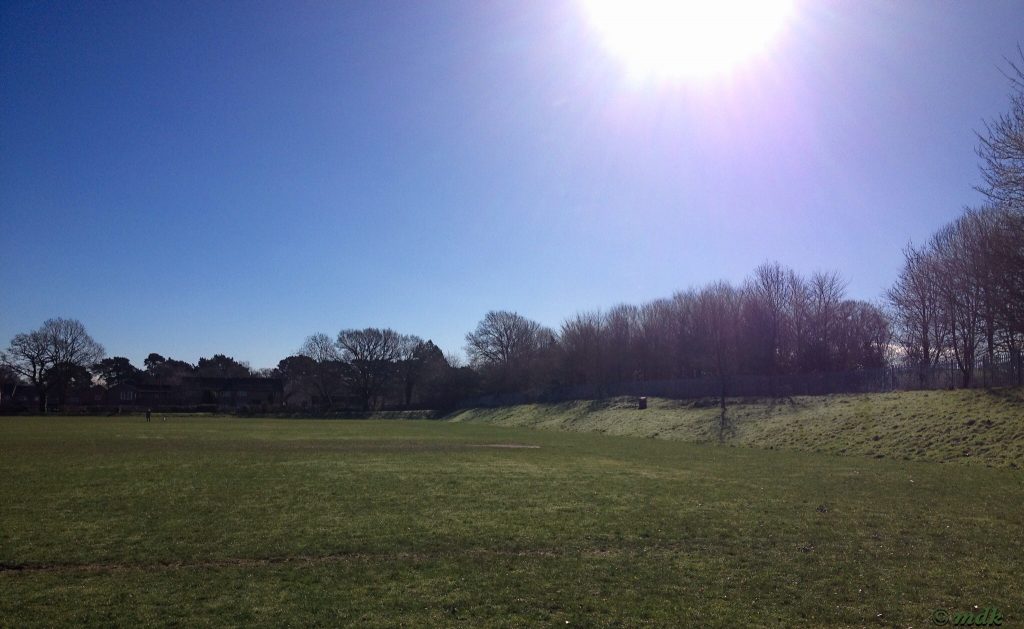 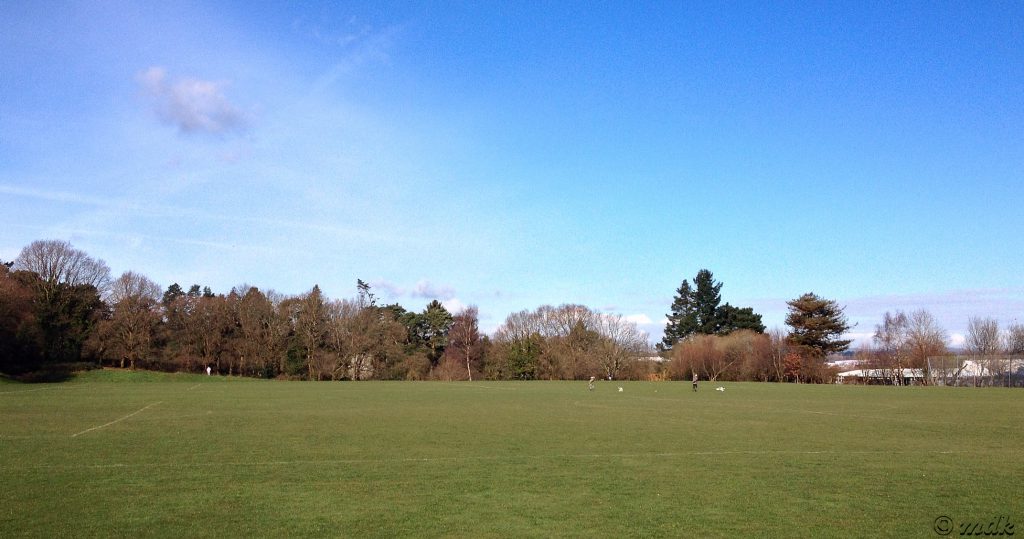 Once I’d found out where the gate was, I was in a narrow lane. Cutbush Lane was at the end of it. There was another small cut here I thought I’d investigate but it only led me in a circle and back to Cutbush Lane. Not very interesting but at least I know now. Of course what goes up must come down but, when you reach the bottom, you have to climb back up again and the last part of my journey was all up hill to the village. By the time I’d picked up some lemons and sugar for tonight’s pancakes and walked back in the door I’d covered almost five miles.

I was drinking a well earned cup of coffee when my phone rang. The woman from yesterday’s interview at the University. They did say they would make a quick decision. As she spoke my heart was in my mouth, my fingers crossed. Would this be it, a new job? Sadly not. “The quality of the candidates was very high,” she told me. “We liked you very much but, unfortunately, there was another candidate with more experience of assisting numerous professors.”
Oh well, there are ups and there are downs. At least I won’t have to buy a bike now.