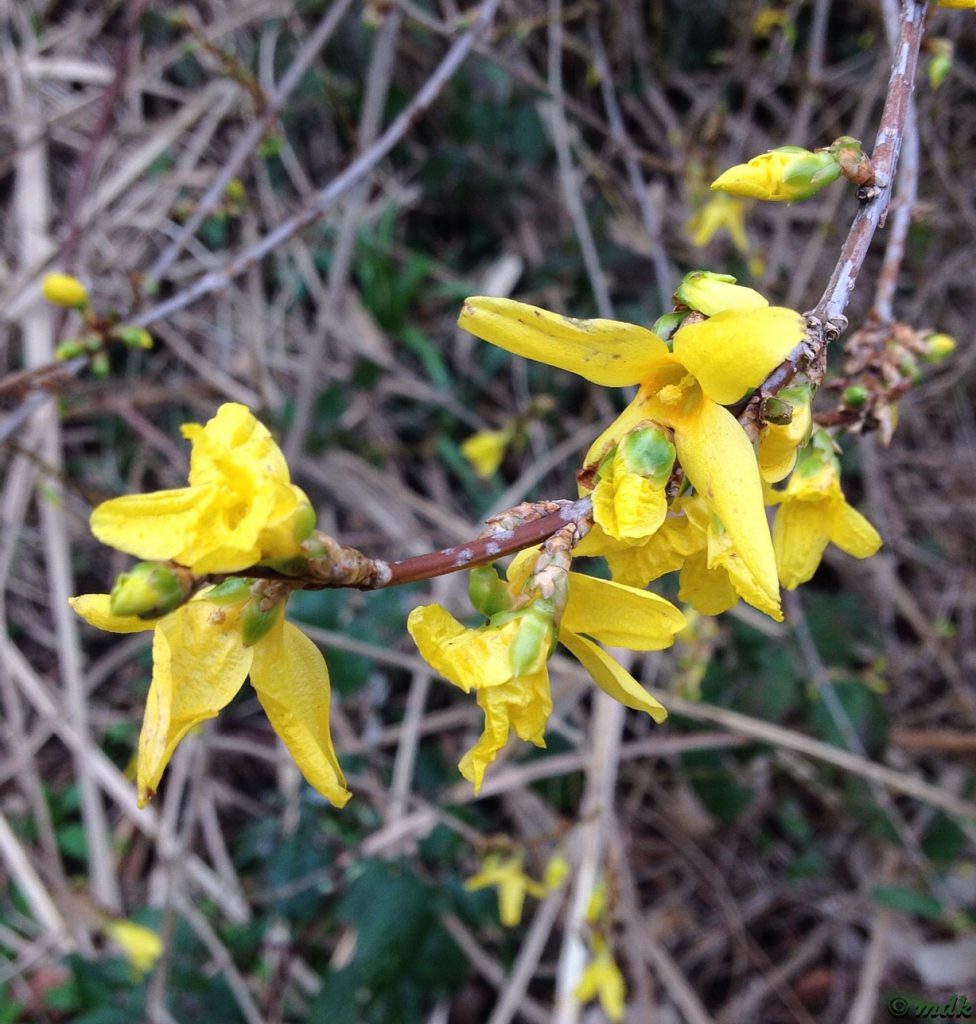 I’m always thankful that I live near the sea. There’s something about the sound of crashing waves and the taste of salt in the air that can’t be beaten. It may not be a beach of golden sands, with palm trees swaying and the sun beating down but, some days, the shore calls to me and, when it does, it have to listen. In early March 2014, I did just that.

Last night I mapped out another woodland walk, planning to explore a little copse a couple of miles away. The sea was calling me this morning though so I abandoned my carefully worked out route and listened to her call. Well, after I’d procrastinated a bit, checked my emails in case of job offers, had a coffee…

Eventually I went out. It’s about two and a half miles to the shore and most of that is streets of houses. Most of the houses have gardens so, today, I was looking to see what, if anything, was growing. Turns out quite a lot. The first forsythia flowers were out, raggedy yellow four petaled stars that scream spring is coming. More a sign of winter than spring, but I couldn’t help but stop for a beautifully skeletonised hydrangea, that tatty lace look does it for me every time. On my way through the first cut way, I noticed the roofs of the garages below the path were growing quite a nice crop of grass. It made me think of Norway and the houses with grass roofs. On a garden wall acid green moss flowers caught my eye. Close up moss always reminds me of a miniature forest. Another wall had aubretia tumbling over it and the first flowers had just opened. The pretty purple petals were speckled with dew. Yet another wall was clothed in alyssum, white petals just unfurling. 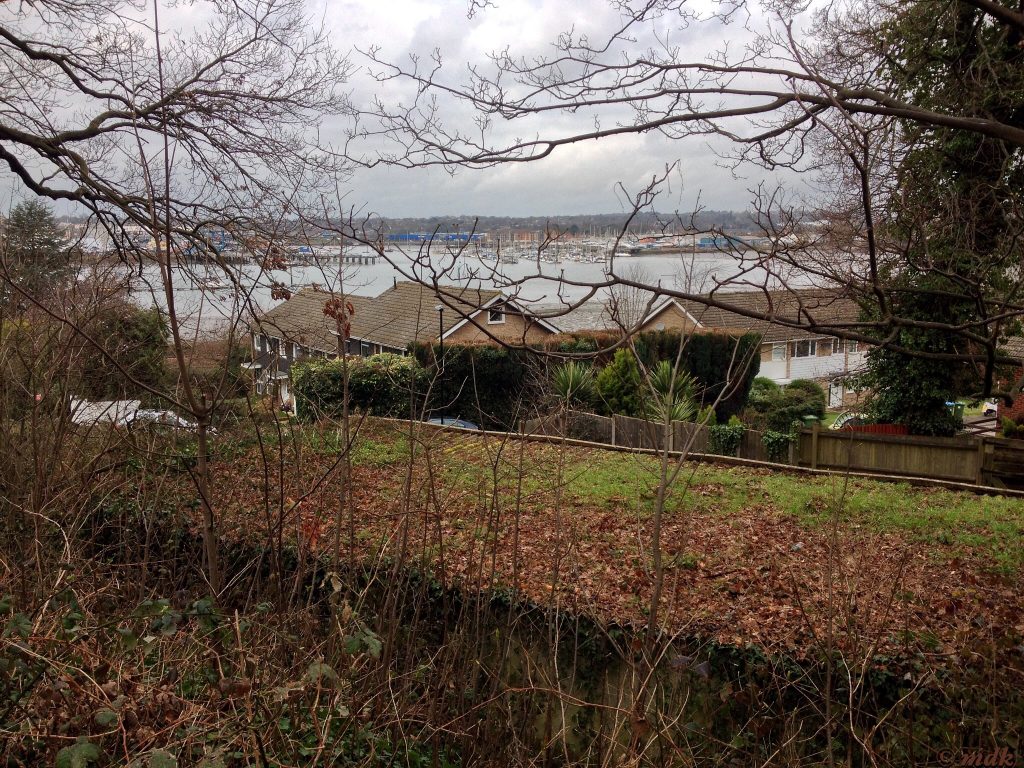 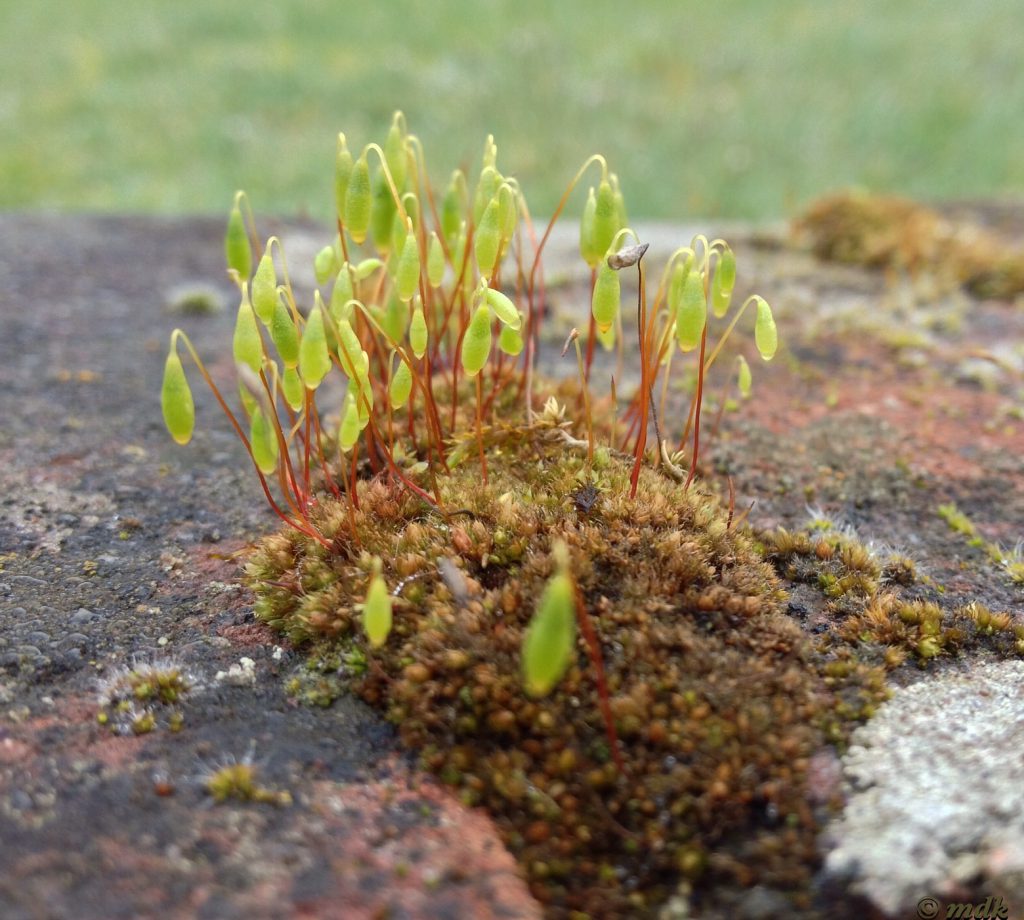 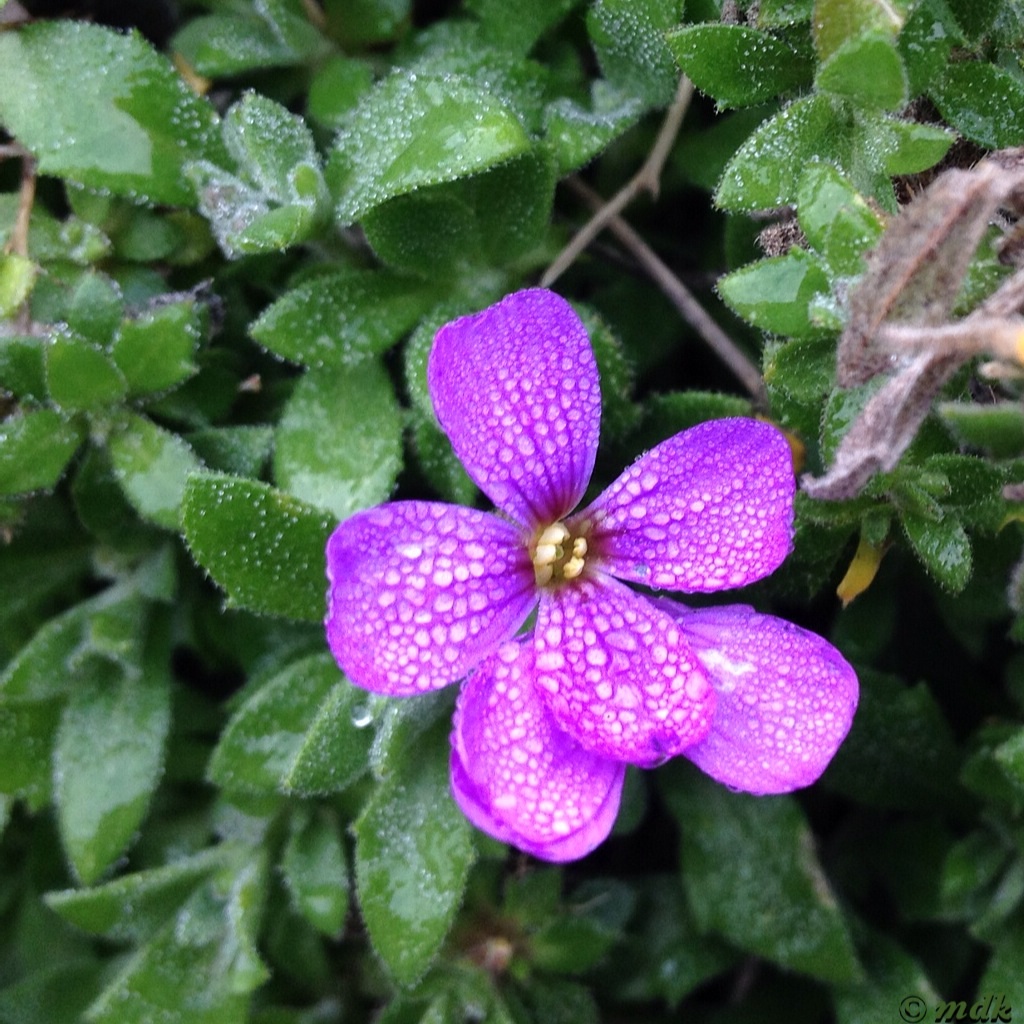 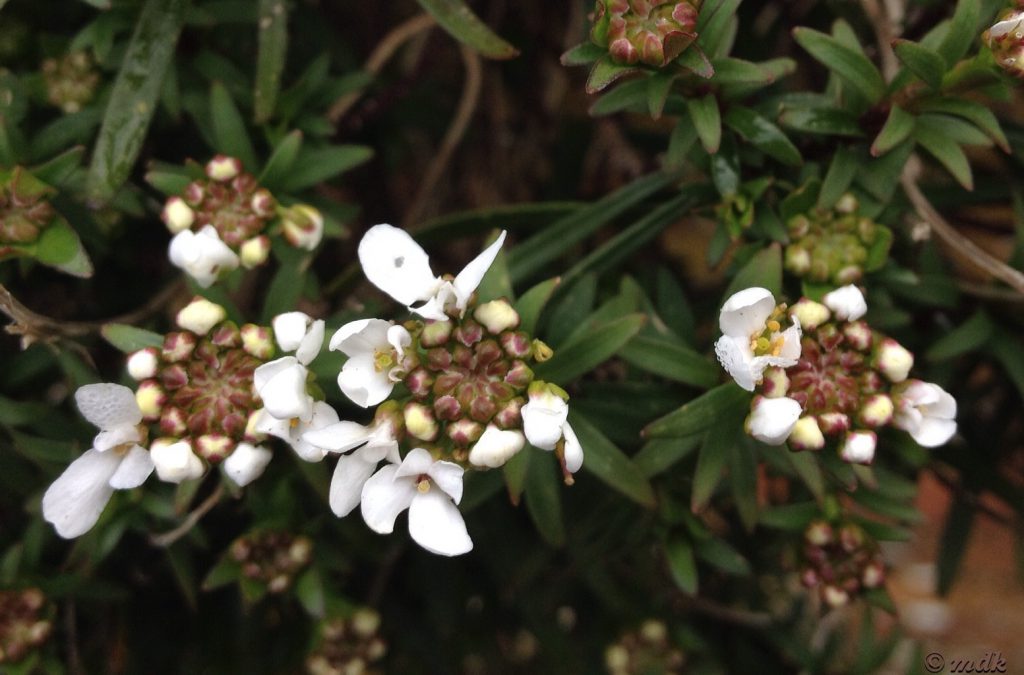 The camellias have been flowering for a while now in the parks but one garden had a beautiful show. The bright pink were my favourite, the petals marbled with darker veins. The white variegated with splashes of pink seemed a little to gaudy for me but each to their own. When I came to the little woodland path I was hoping for a few wild flowers, all I got was mud. Maybe down on the green spring would have sprung but I was too impatient for the sea to venture off course today. 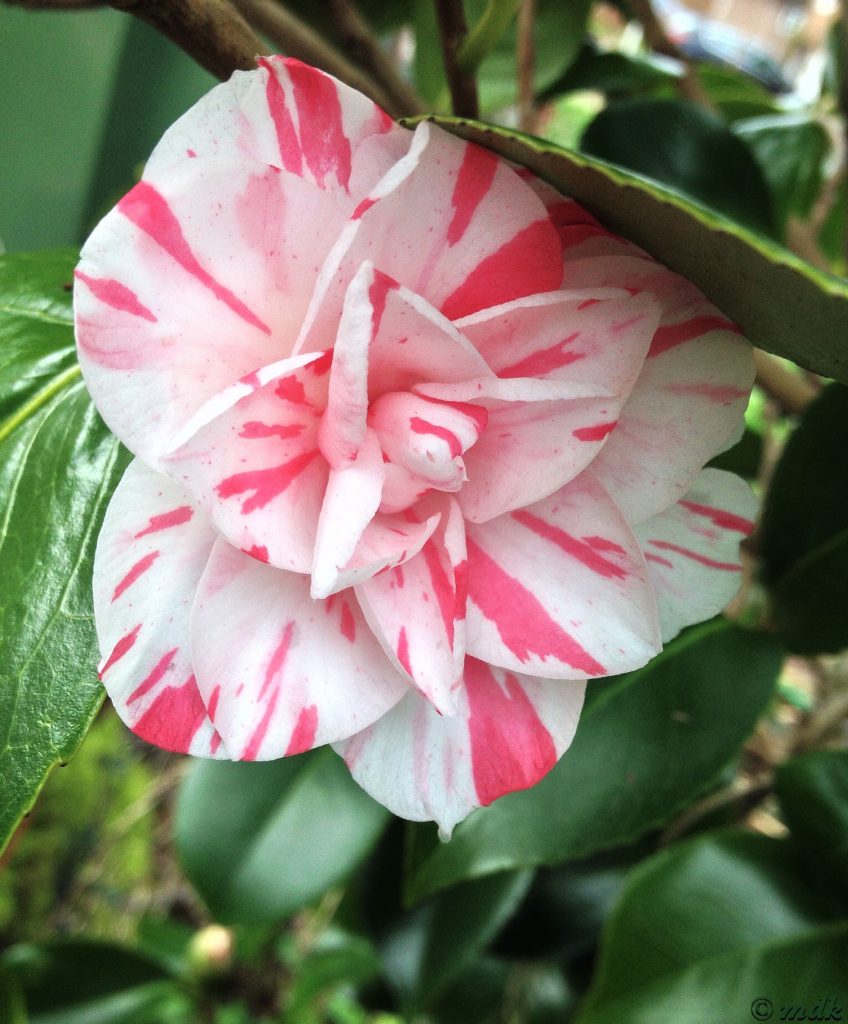 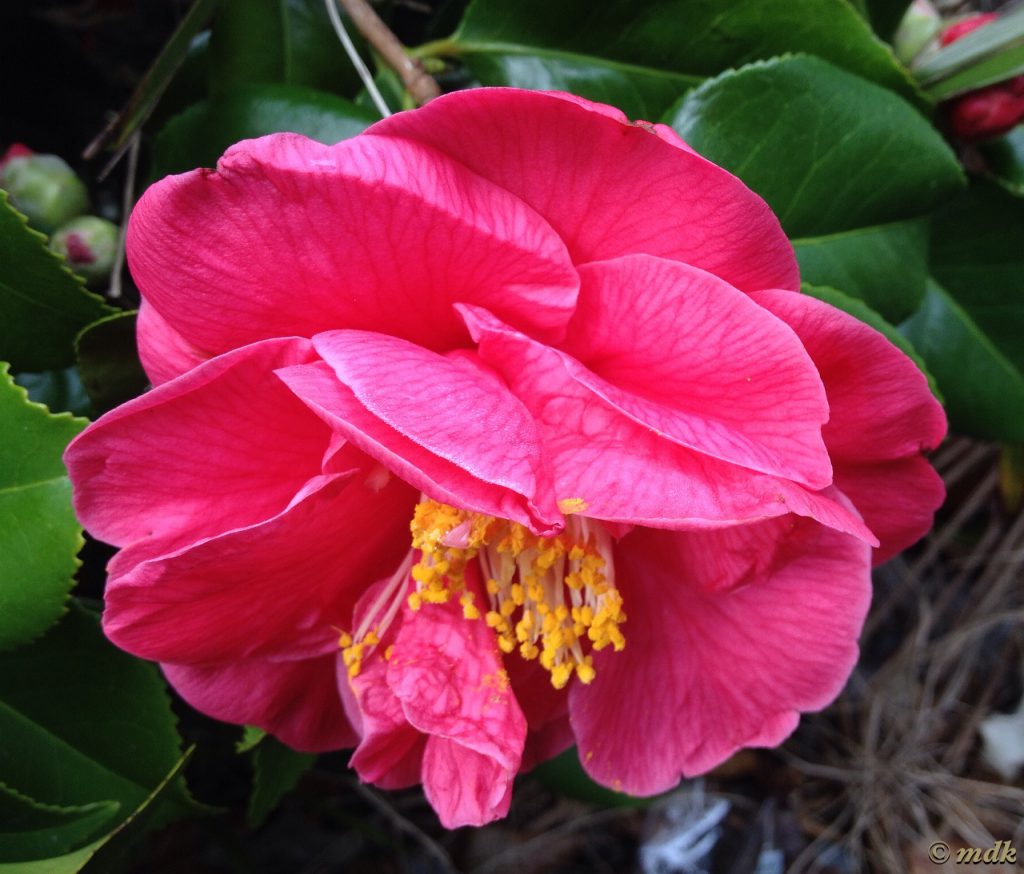 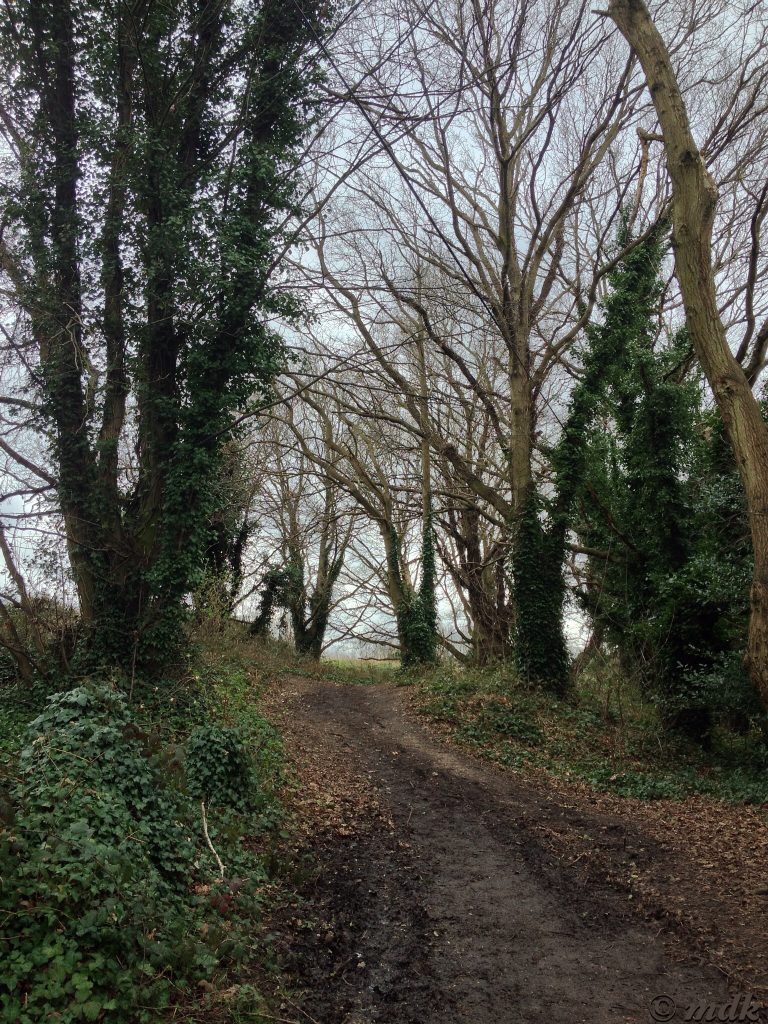 When I reached the shore the first thing I saw was fenced off grass. On my last visit the grassy bank beside the path had been crumbling away because of the terrible storms and super high tides. Since then things have got worse and the first part of the bank has been fenced off. The drop is probably only about four foot but enough to cause a nasty injury if it gave way beneath your feet. 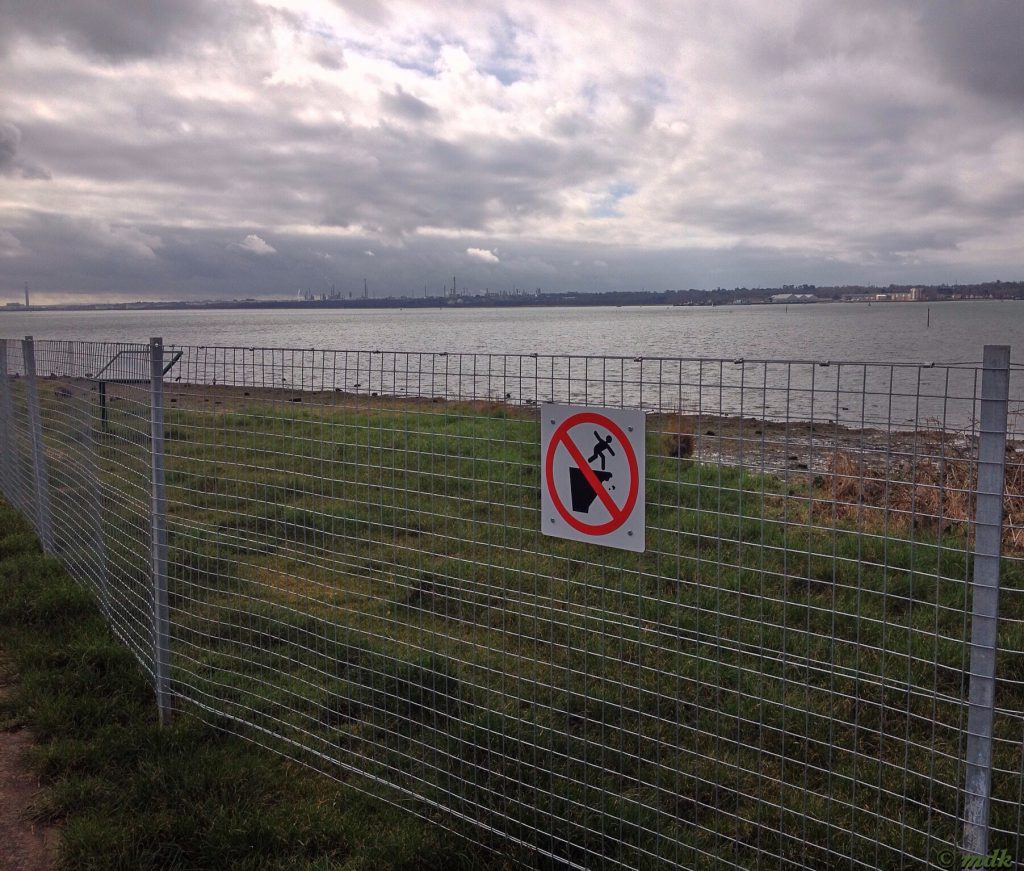 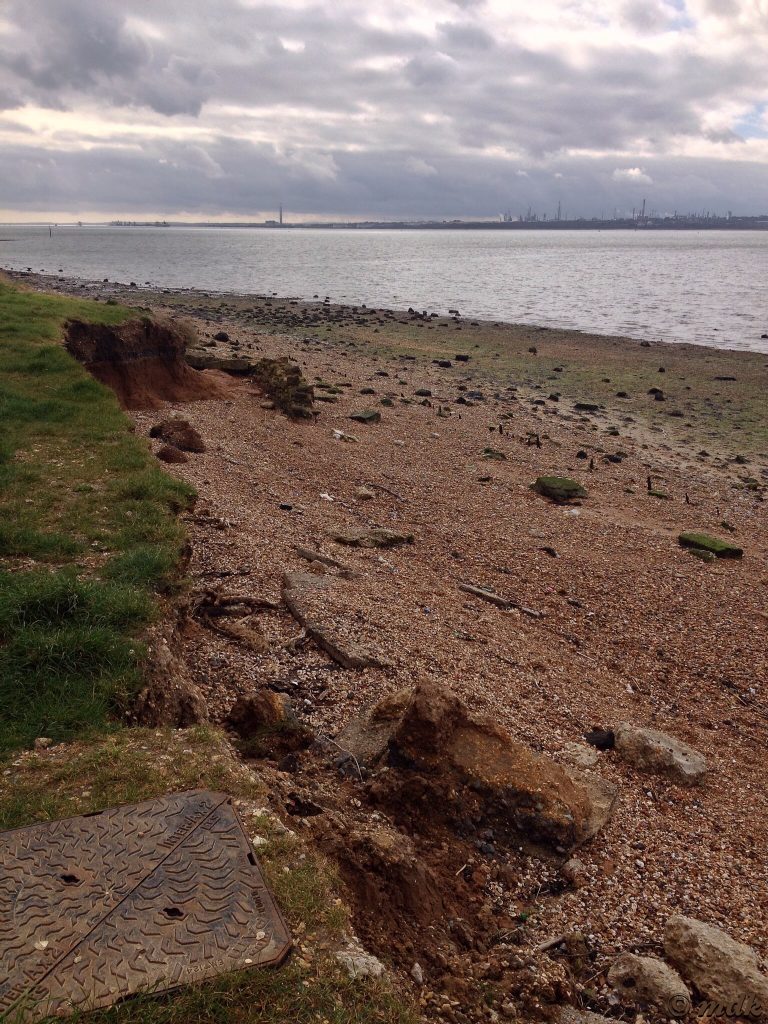 Further down the path there were kites in the sky, big semi circular kites. They brought a smile to my face as I remembered flying my own kite with my dad as a child. When I got closer and saw they were no ordinary kites I stopped to watch for a while. These were kite skateboarders! Some time ago I saw people on this grassy area unpacking harnesses and what looked like windsurfing gear but I didn’t have time to stop. Now I know what they were doing. One of the kite skateboarders left the grass and came sailing along the path towards me at speed. I stepped to the side to let him pass and was astounded when he actually took to the air. This was not a jump, it was a flight! When he landed he grinned at me. He’d seen me taking pictures and I’m pretty sure the whole thing was for my benefit.
“That looks like fun,” I said.
“It is!” he laughed before sailing off again. 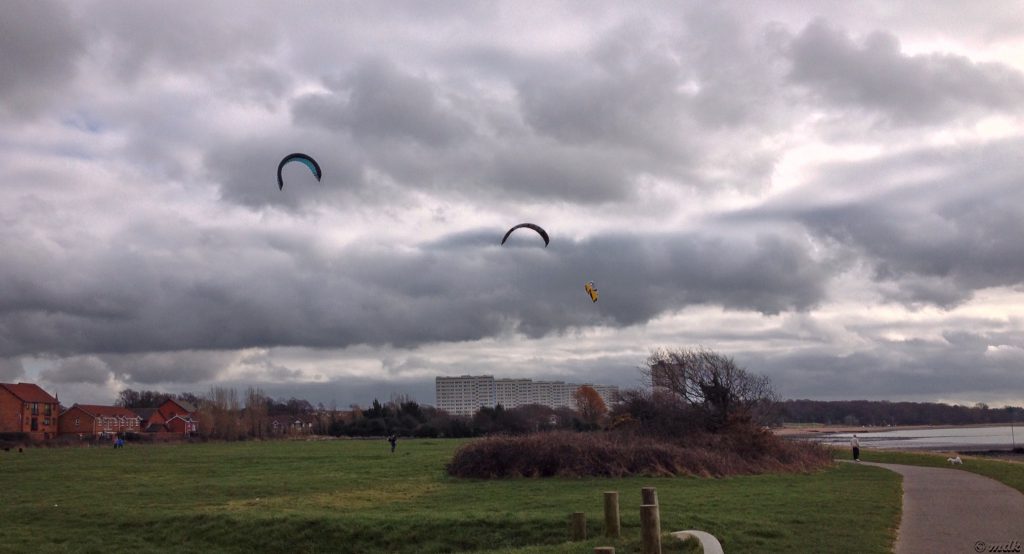 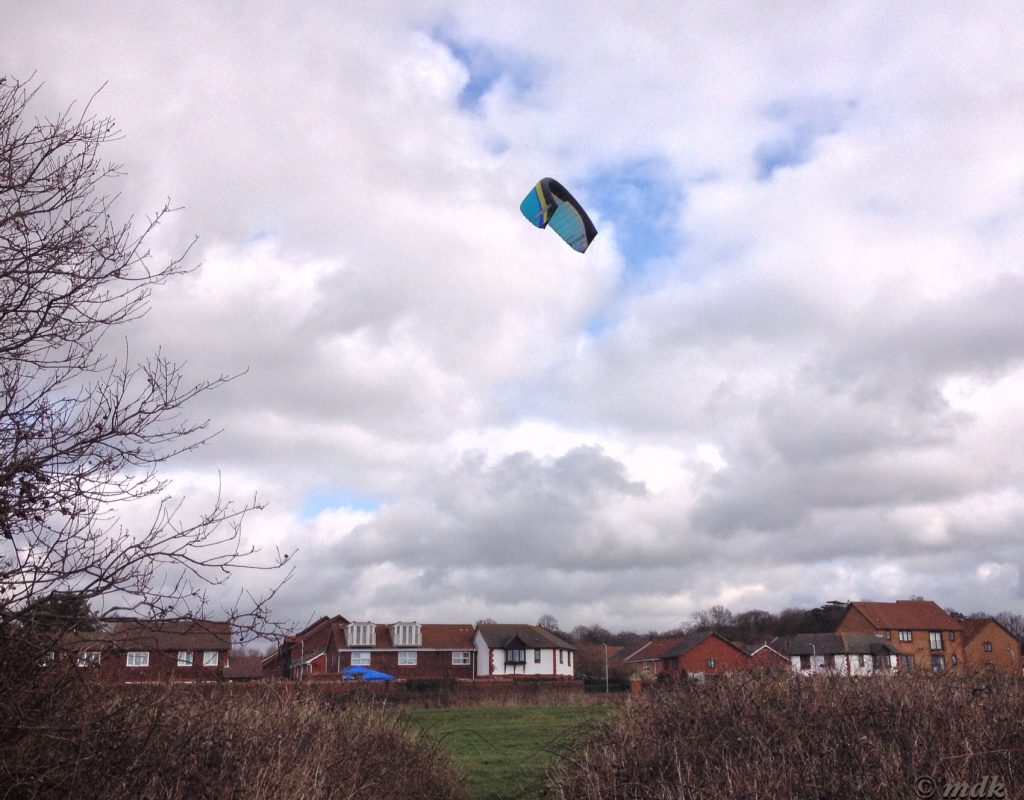 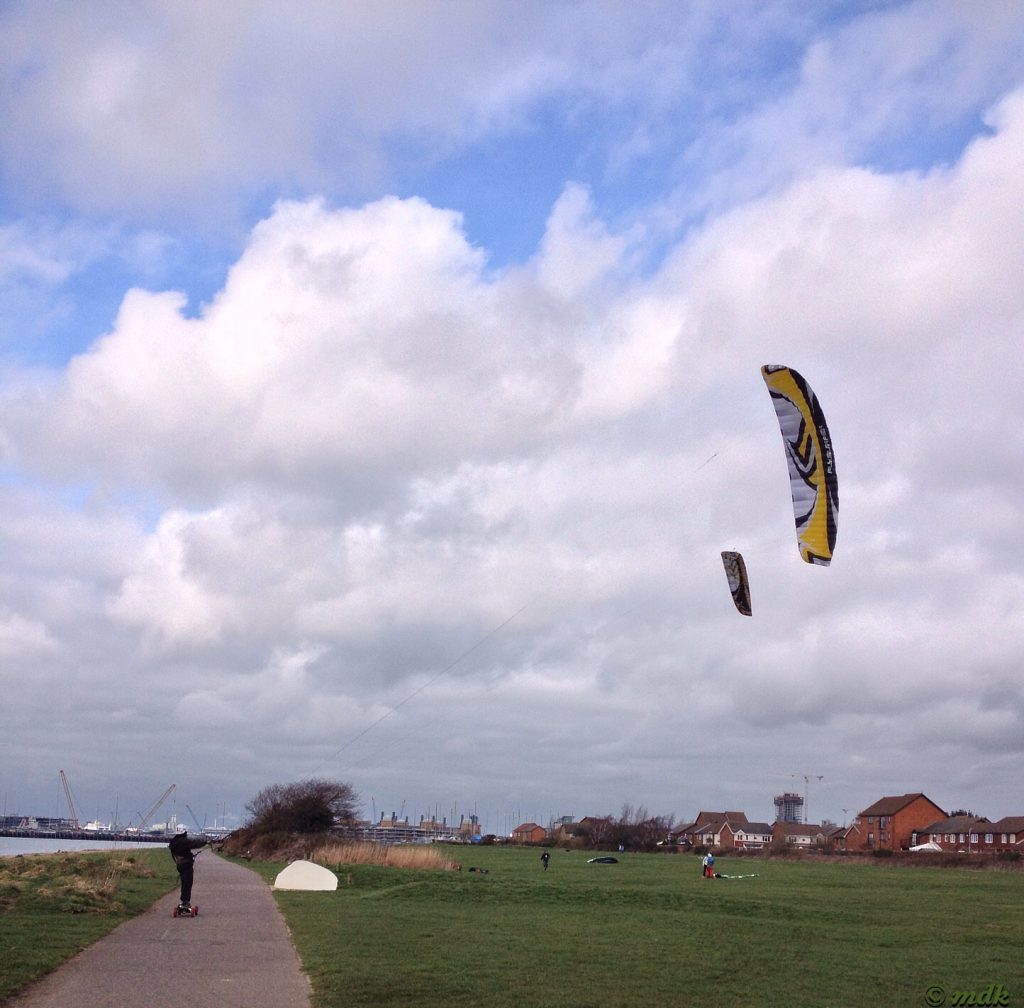 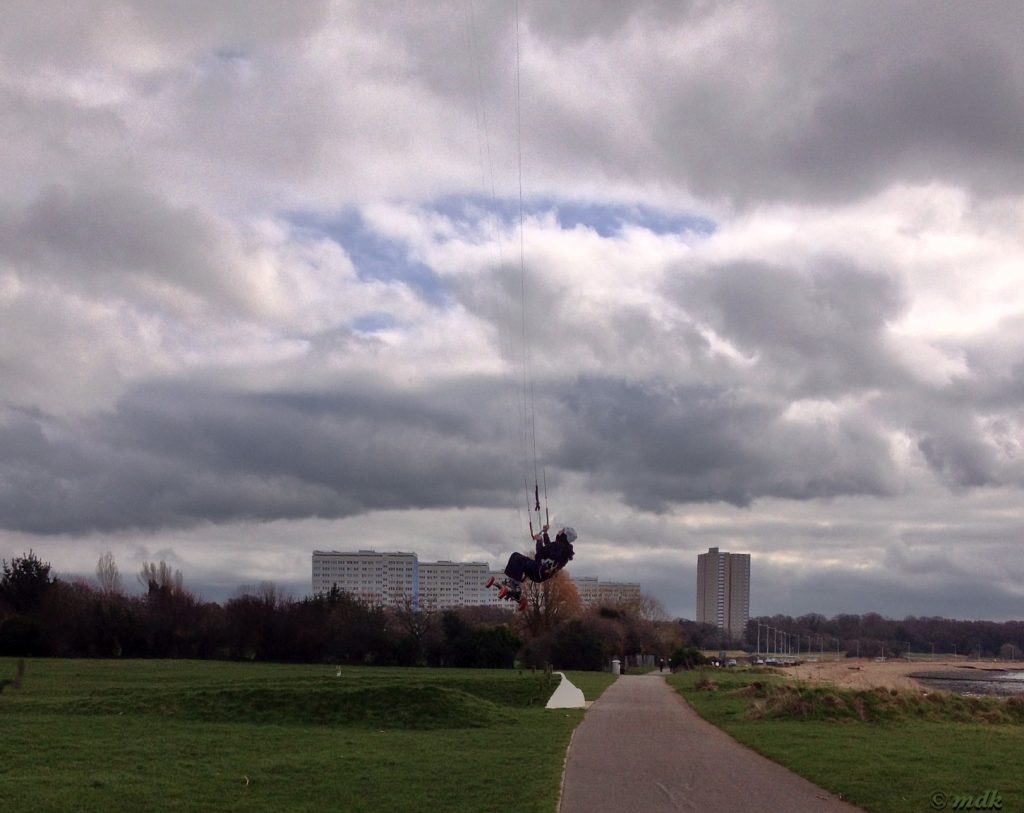 At the other end of the shore West Wood looked to be still pretty wet. One of these days I’m going to explore it a little more thoroughly, maybe when the mud has dried out a bit. Some blue green lichen on an old fence post caught my eye so I paused for a moment. On I went, past the bench where I sometimes sit. It’s dried out a little since I had to wade through the sea here but there are still puddles. 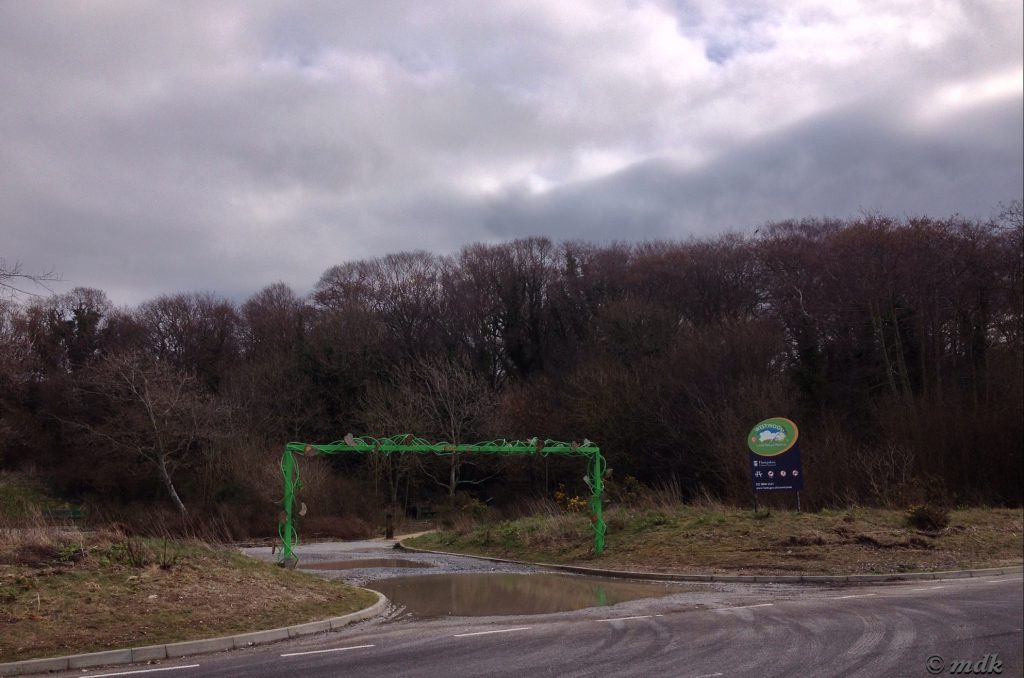 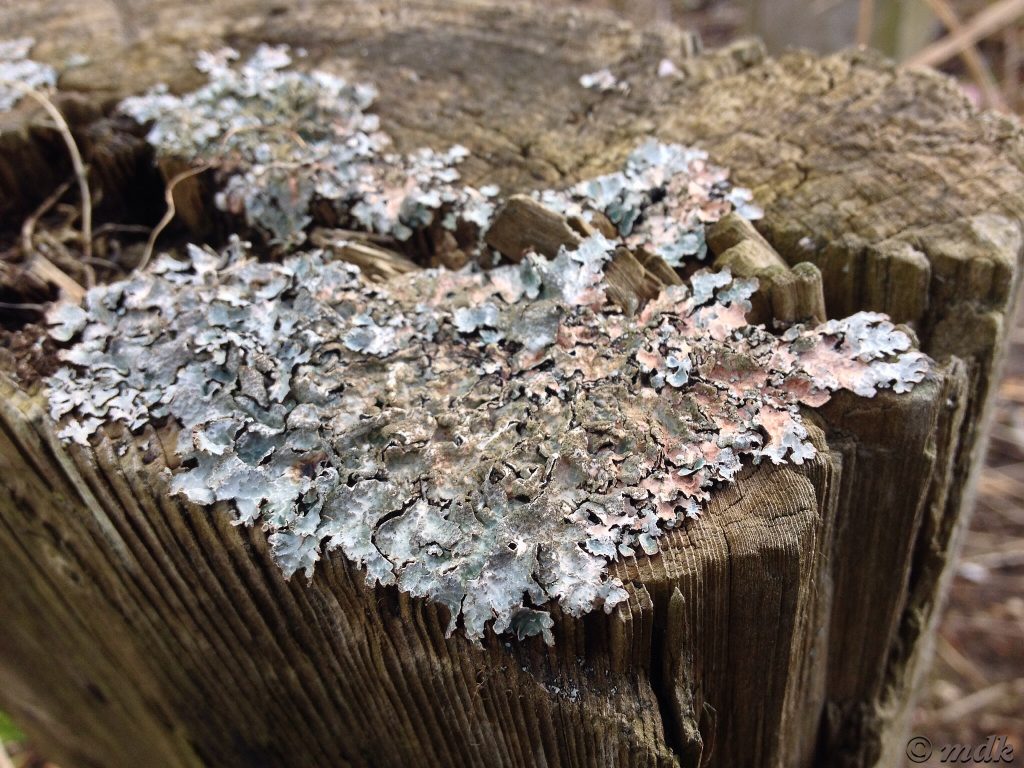 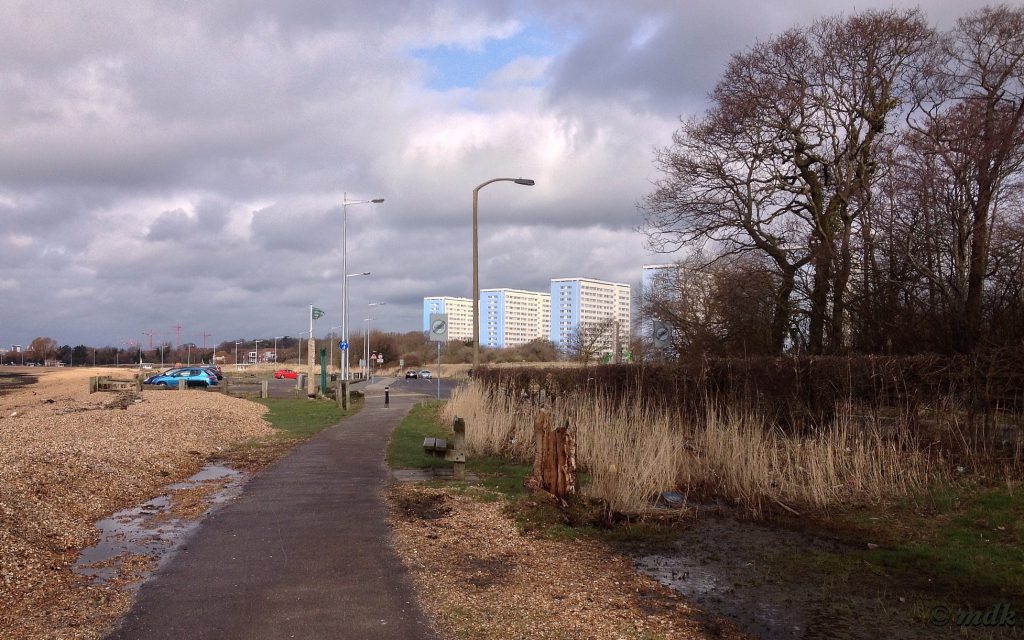 When I left home the sky was grey, as I walked I’d seen tiny patches of blue appearing. At the little stream the blue seemed to be spreading, I’d been smiling since I saw the kite skateboarders, now my smile grew wider. Sea air makes me smile, coupled with blue sky it fills me with joy. On the little bridge I stopped to try to capture the sky reflected in the water but the dried out reeds got in the way. 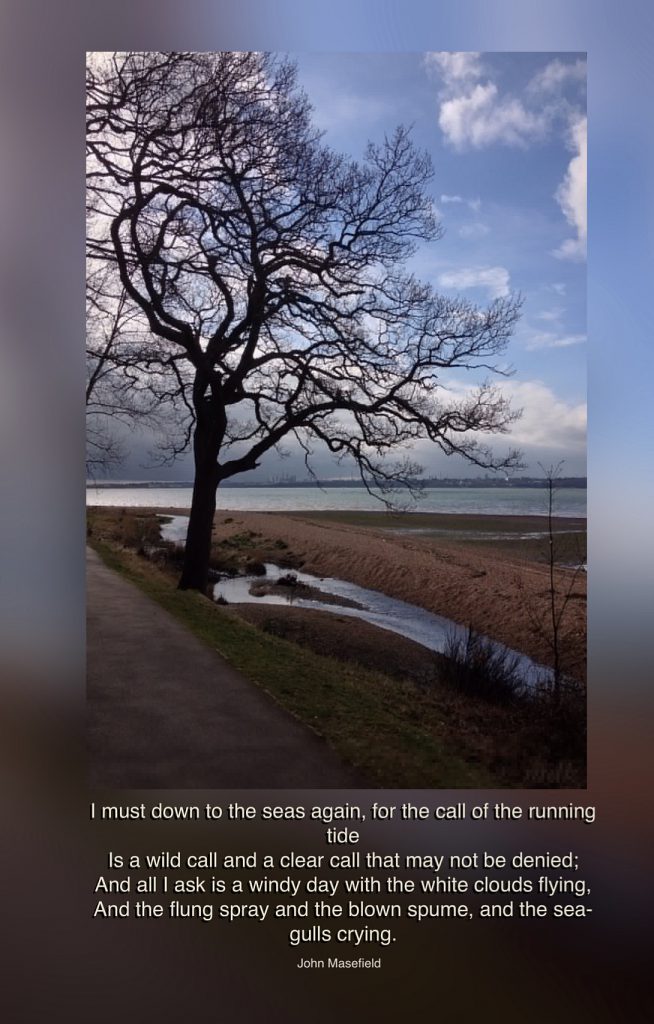 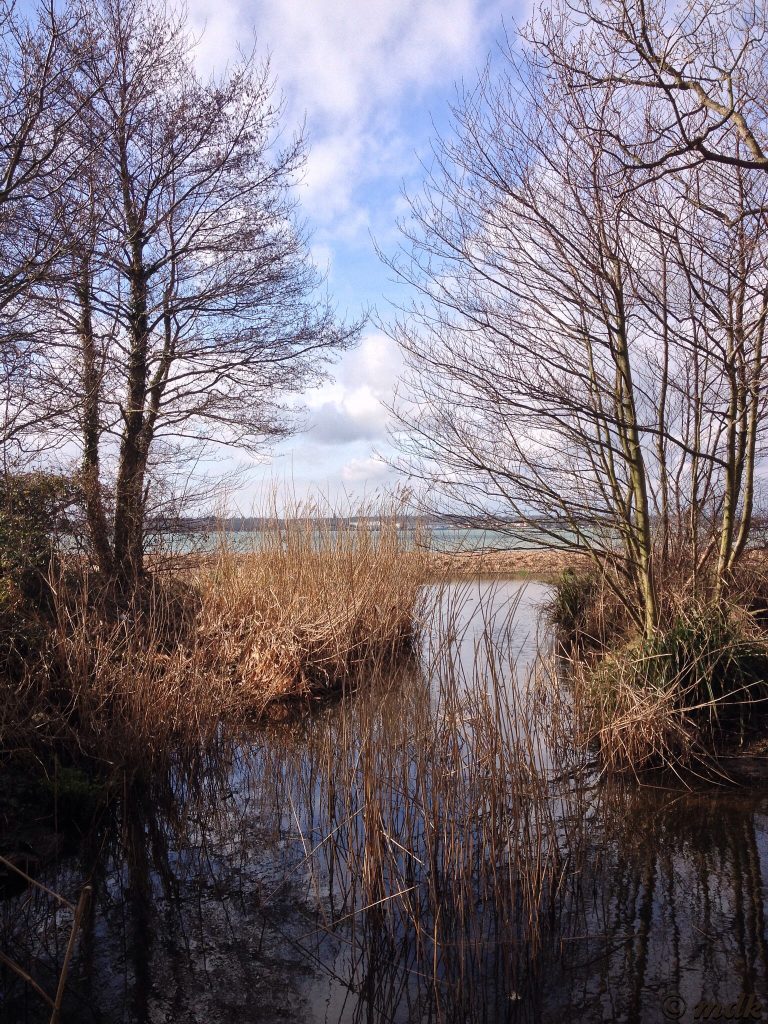 When I reached West Lodge the sun came out. Back when the shore was flooded I wondered if West Lodge had been affected. This listed building, the lodge to Netley Castle, has been beautifully restored, I wrote about it a while ago and the difference between the before and after pictures are beyond belief. It would be a shame if it was ruined by sea water. Rounding the bend I could see they’d built a kind of wall from sand bags and rubble behind the trees. Hopefully that protected them. 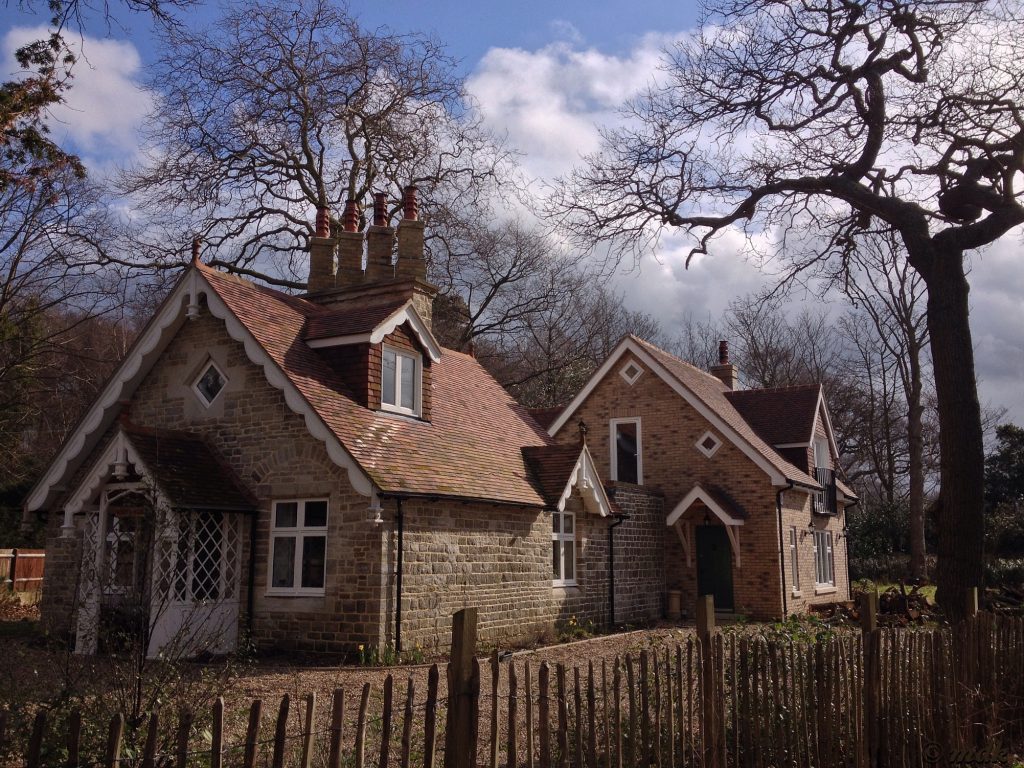 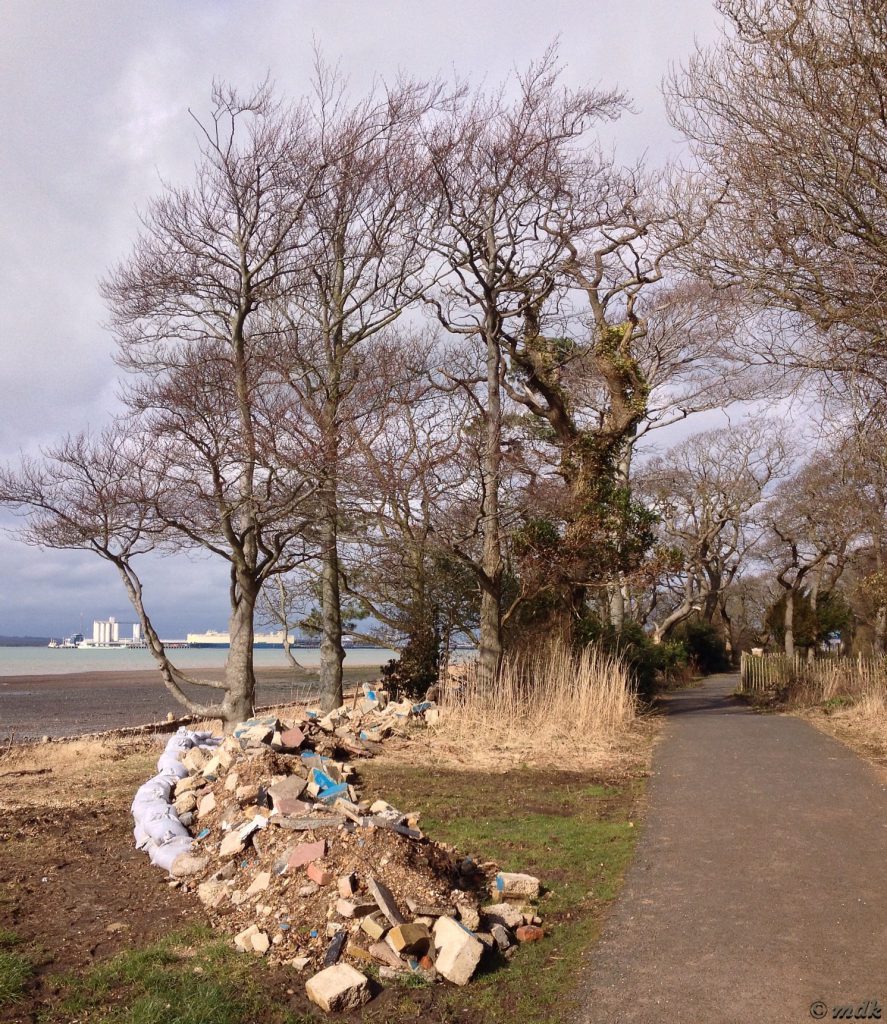 Soon I’d be reaching the path that had collapsed last time I came down here. Part of the reason for my walk was to see if it had been repaired. That part of the story will have to wait though…