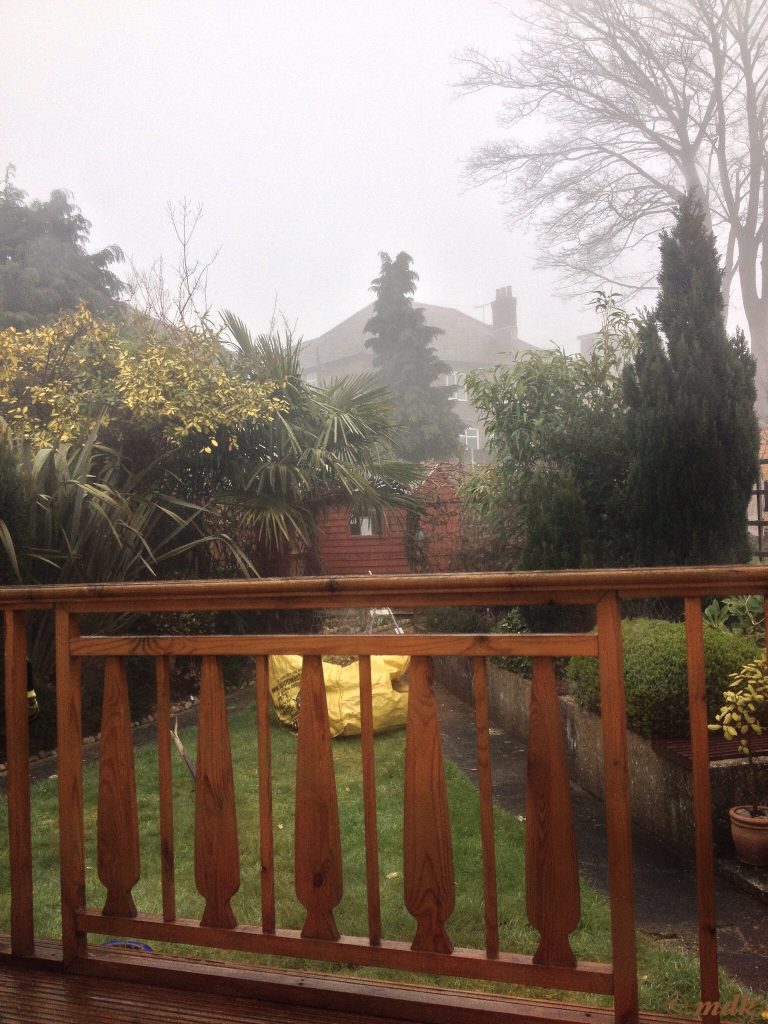 With just a week of leisure left to me before I start my new job I was desperately trying to get prepared and tick off all those little jobs that had been waiting in the wings. The first thing I had to do was make a doctor’s appointment for an epilepsy review. I’ve had epilepsy for twenty odd years now, thankfully fully controlled by medication and these yearly reviews are one of the few reminders that my brain is not quite like everyone else’s. You would think getting an appointment with the practice nurse would be fairly simple, especially as I had a whole week absolutely free and it takes all of five minutes. You’d think it would be easy to get through to the surgery in the first place. You’d be wrong on both counts.

Why is nothing ever simple? A letter came last week telling me I needed to book an appointment for my epilepsy review. With a new job looming on the horizon I thought I’d better get it over and done with quick smart. The first time I phoned, it rang out. I wondered if they’d changed the number since I last called them. It has probably been a year after all. While I was Googling to check the number I tried again. Eventually someone answered. The receptionist was quite curt but that is fairly normal, I’m pretty sure they only employ rude, miserable people to discourage patients from bothering them.
“Which surgery do you want the appointment at?” she asked, without even bothering to say hello or ask my name.

My surgery is at the top of the Little Hill about five minutes from my house. Unfortunately, a few years ago, they opened a second surgery about two miles away and, since then, they seem to be trying to make everyone visit that one. I get the feeling they’re trying to close down the old surgery by stealth. Anyhow, I told the receptionist I’d prefer the local surgery but, if necessary, I would be able to walk to the other one. The only available appointment was in two weeks time on a Thursday, in the middle of the day. I explained that I was starting a new job that Monday and would not be able to get time off in my first week.
“Well you’ll have to wait until you’re on holiday then won’t you?” she said.
“I won’t be entitled to any holiday because I am starting a new job,” I said, wondering if she was listening at all. “Is there nothing else you can suggest?” In the past I’ve been able to have the review over the phone and just pop in for the blood test so I thought I might be able to do that.
“No.”
“So I guess I will just have to go without the review then?”
“Yes. Thank you for calling…”

It isn’t as if I want to have the blasted review. I was only calling to make the appointment because my GP wrote to me and asked me to. In the UK we all pay for the NHS through out National Insurance. If I paid for any other service and got such shoddy treatment I’d probably be looking around for a different supplier and asking for a refund. Unfortunately, in this case that isn’t an option.

With the doctors appointment issue unresolved, my next task for the day was to walk to town to look for some new shoes. My poor old summer Skechers are beginning to fall apart. Because of the job situation I’ve put off replacing them but, with the job offer (pending the medical results), I thought I’d throw caution to the wind. CJ said he quite fancied joining me, especially as there was the prospect of a Costa latte. He knows his mother well.

The early morning fog hadn’t burnt off when we left home which was disappointing. It was chilly and damp, the sun just a pale circle behind the clouds. Half way up the hill we turned to look back and most of the village was hidden in the murk. The trees on the green were shrouded by mist and, as we crossed the New Bridge, Southampton seemed to have disappeared. 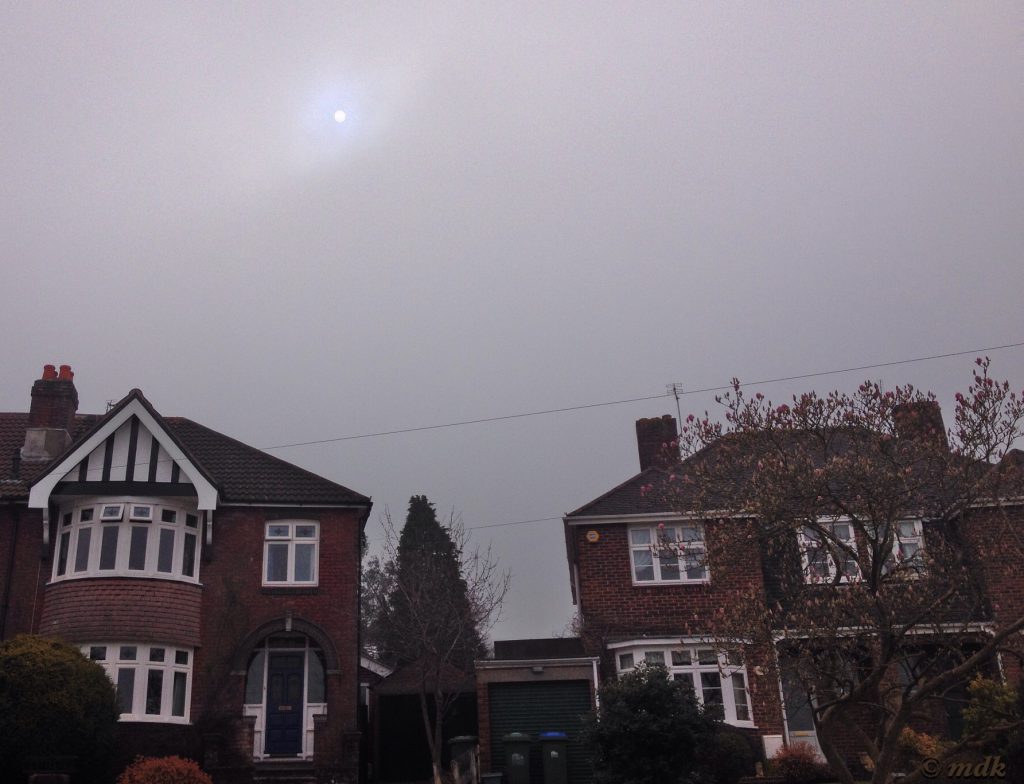 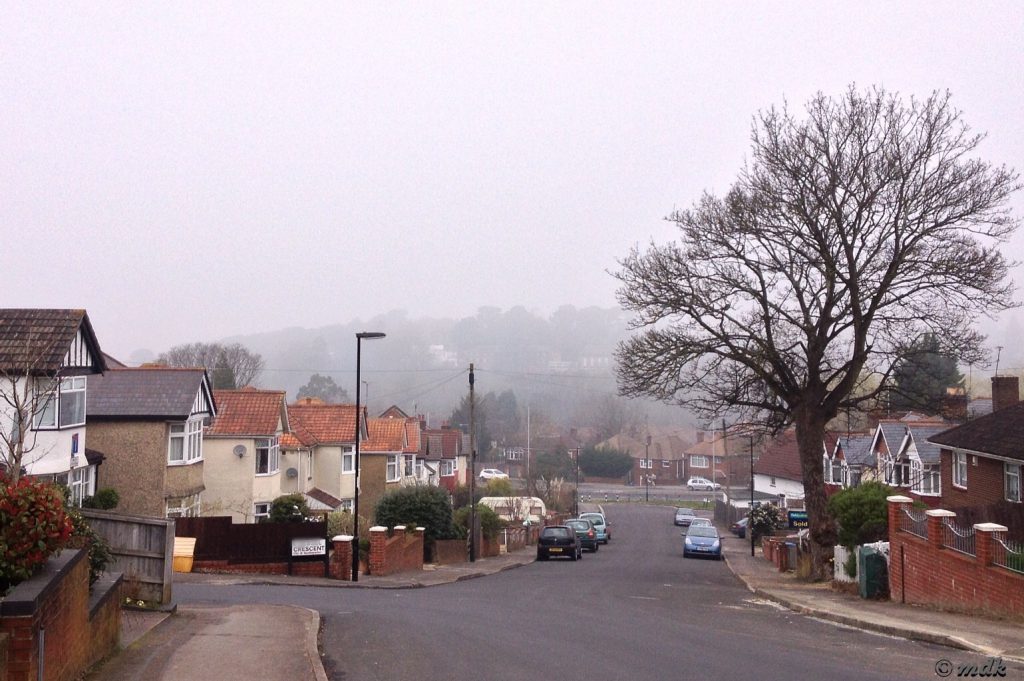 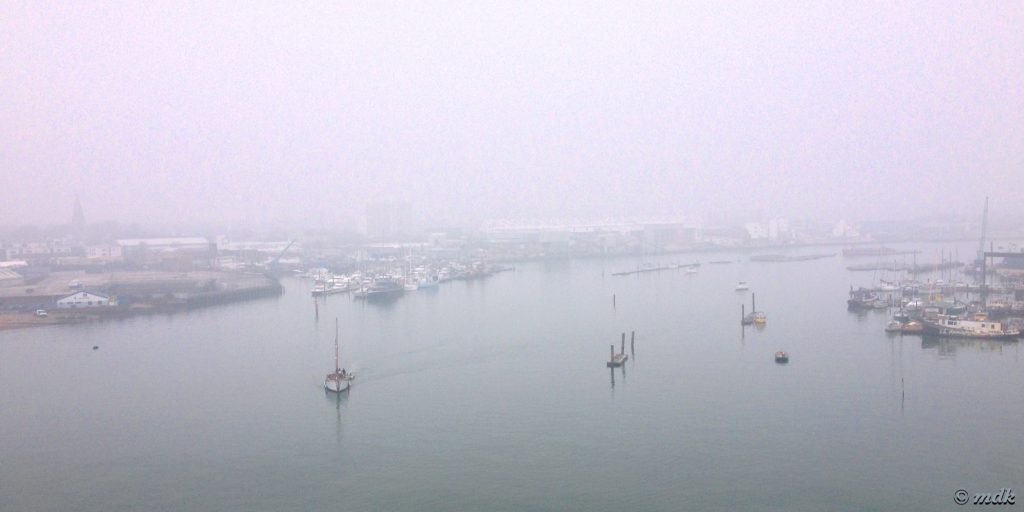 Feeling slightly chilly round the edges we popped into Costa for a take away coffee before we’d even done any shopping. It was tempting to have a sit down coffee but I thought we might find it difficult to go back outside if we did. We walked through the Bargate and into the precinct clutching the warm cups and found a bench to sit on. The Friday market was on and we found ourselves sitting behind a rather interesting looking food van. I’m not an aficionado of motor vehicles so I have no idea what it was but I liked the look of it’s snazzy red and cream paint job. I especially liked the poster on the side. 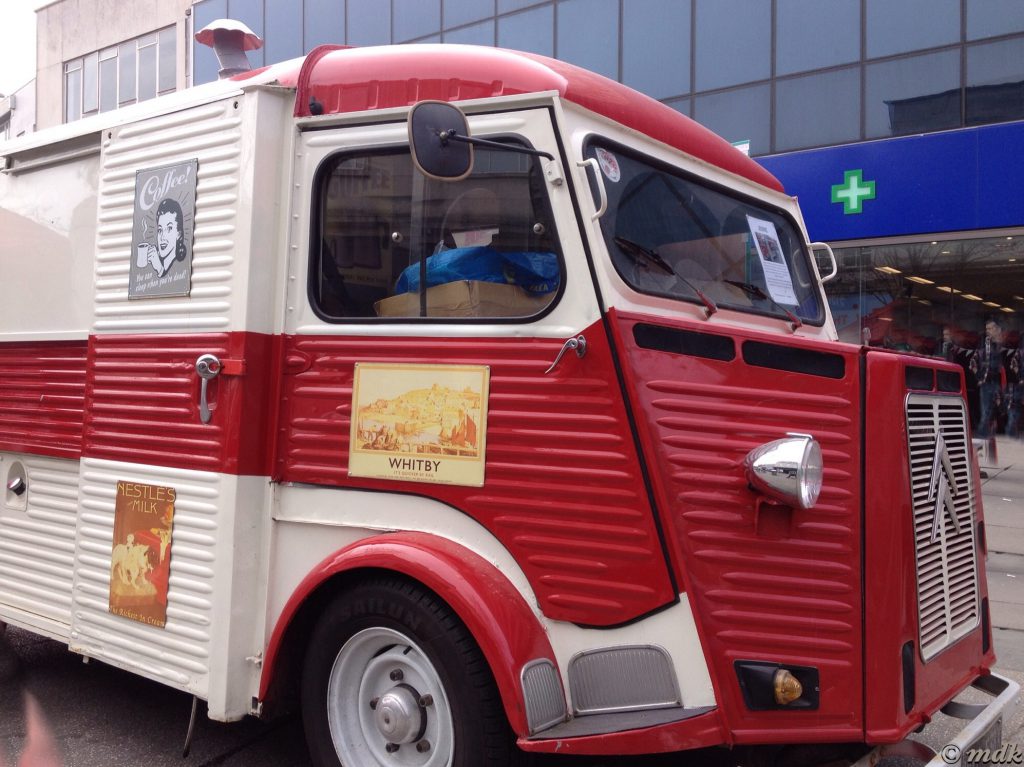 For a long time now Skechers have been my favourite footwear, mostly because they are so comfortable. A while ago though I noticed a new shoe shop on Above Bar that piqued my interest. It’s called Shuropody and I’d seen some shoes in the window I liked the look of. Of course, with no job all I could do was look, until now… Shuropody is not an ordinary shoe shop. They sell shoes that are kind to feet and they’re also all about foot health. Each store has an chiropody centre where you can get all manner of professional treatments and you can buy orthotics and foot are products. Better still, the shoes I had my eye on were in the sale! Why didn’t I know about them before?

On the way back we took a little detour through the enchanted park. The magnolias look spectacular and I took advantage of my tall son to get a photo of a bloom up close. The ground around the tallest tree was a sea of pink petals and when I looked closely they were speckled with moisture. The fog was finally beginning to lift. 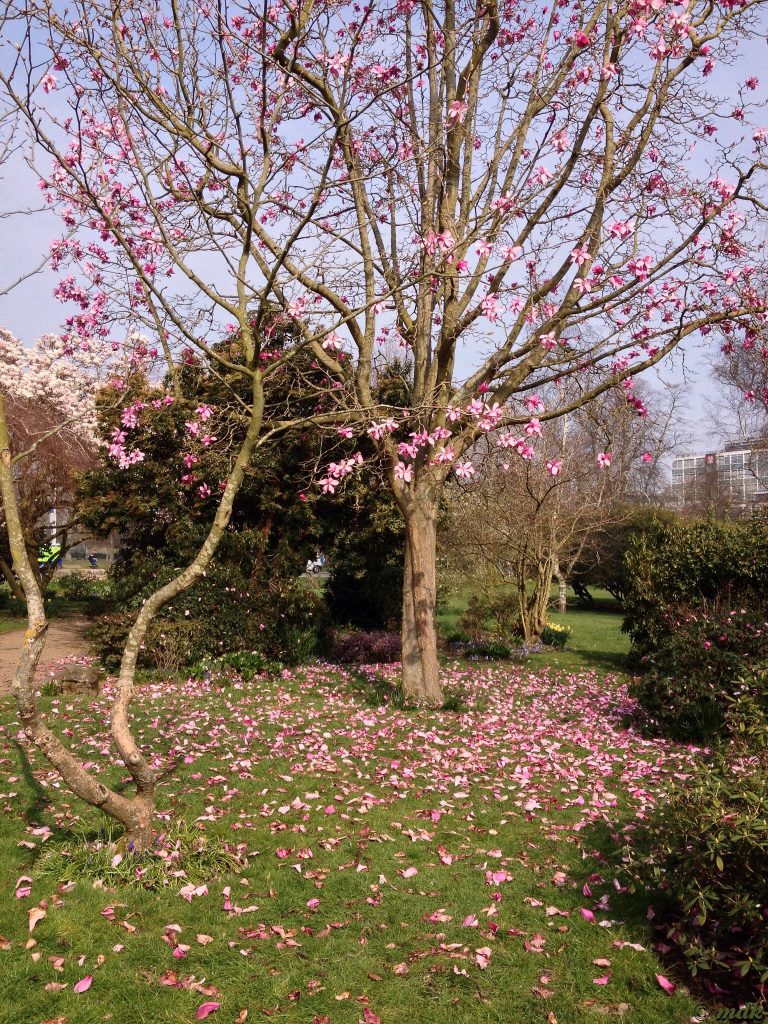 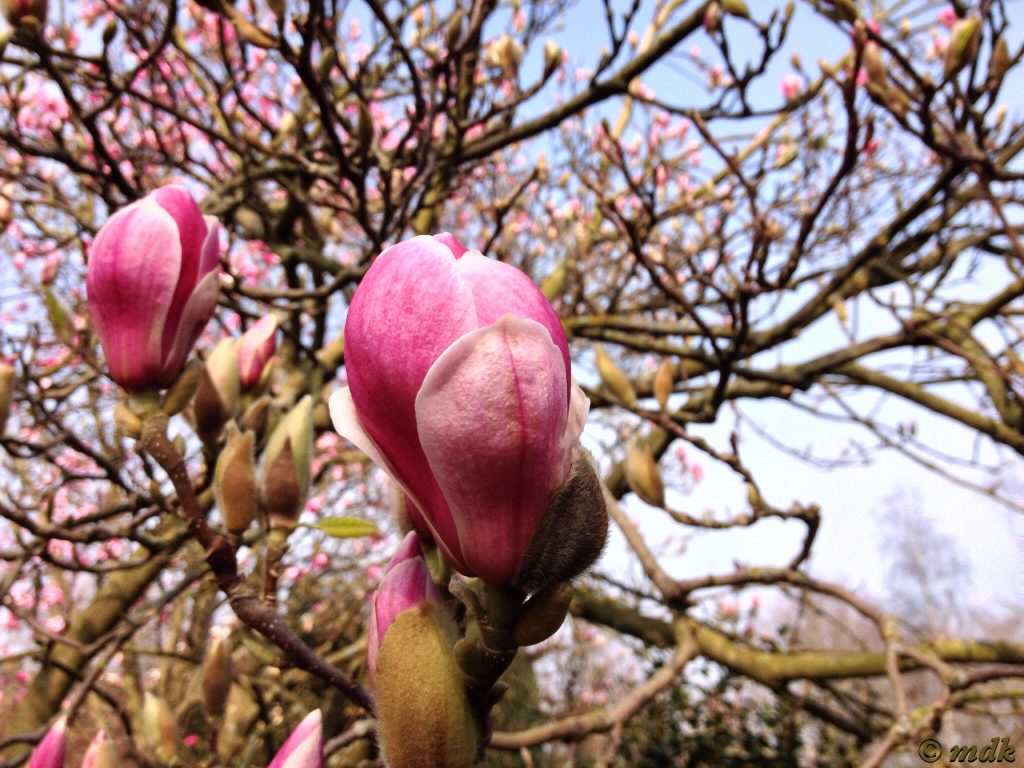 Further on, the pale pink magnolia is blooming. The park is a festival of them right now. Underneath, the squills are such a bright blue they seem to shine. In fact the whole park is a riot of colour. Every corner seems to be bursting with life. 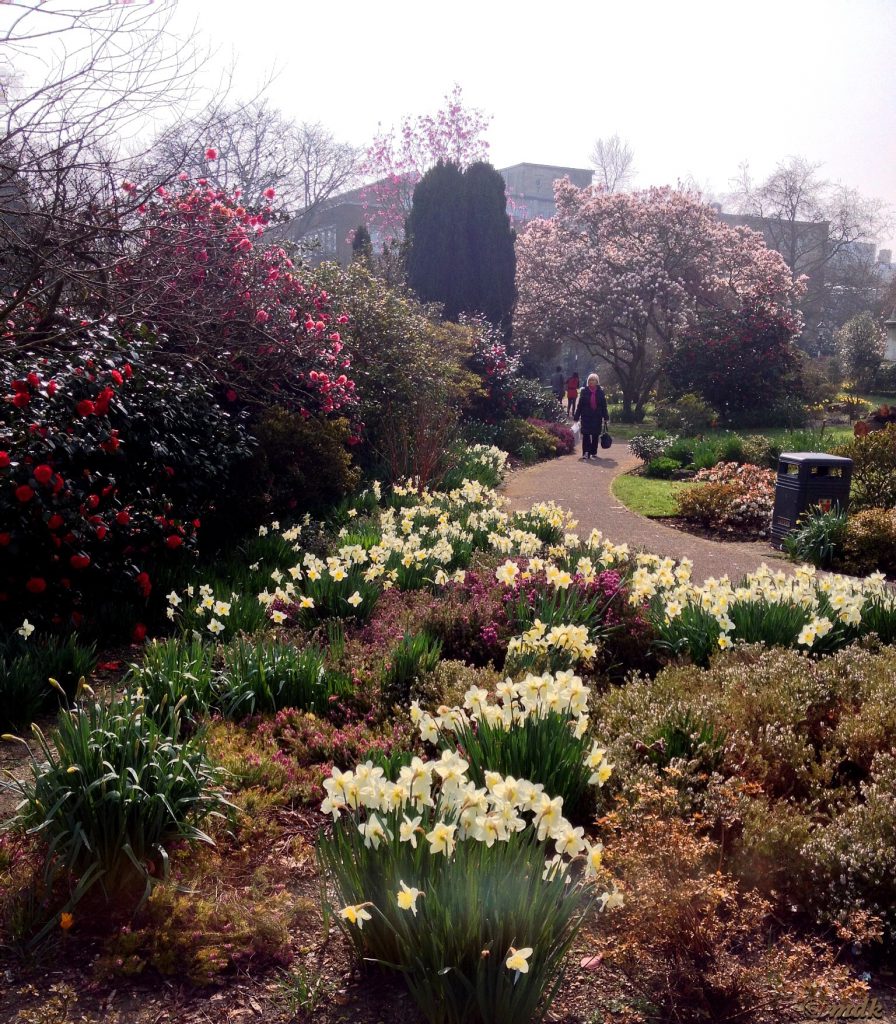 We walked back over the Big Bridge discussing the missing Malaysian plane that’s been on the news and all the conspiracy theories around it. It does seem odd that something as large as a plane, filled with all sorts of technical gizmos to track it, should just disappear and I can’t imagine how the families of those passengers and crew must be feeling. It was after one o’clock and the sun had more or less chased away the fog. We felt lucky to be alive with the warmth seeping into us and the sky getting bluer by the second. 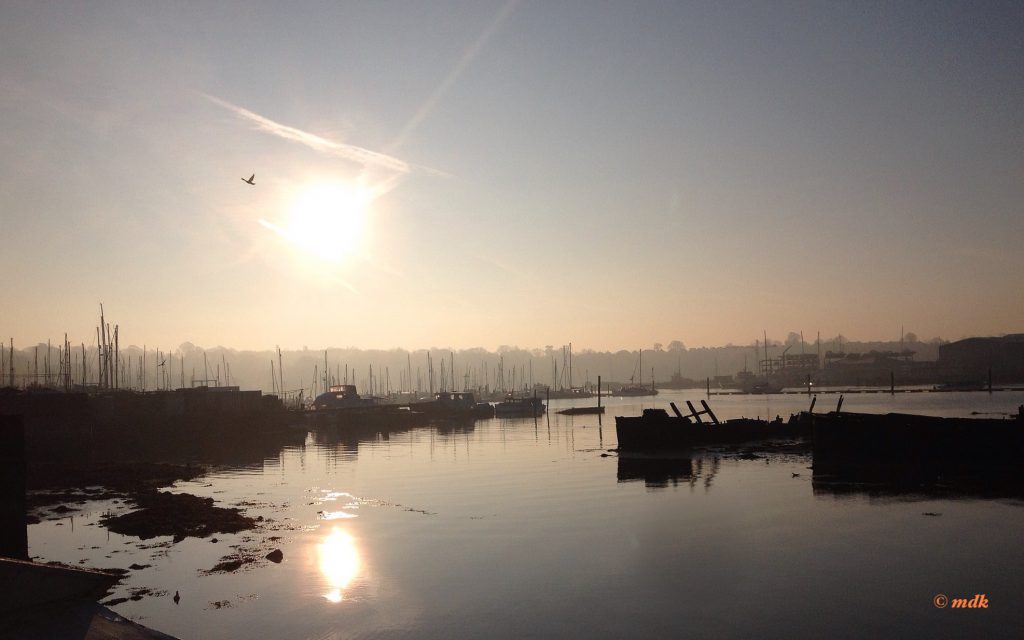 After lunch I decided to do something about the doctors situation. We keep having this problem and we keep saying we should change surgeries but it seems such an effort as we hardly ever go to the doctors. Anyhow, with the help of Google, I found the phone number for the only other surgery in the village, it’s about five minutes further away than ours but still easy to get to.

The receptionist sounded cheerful and polite. When I asked if they were taking new patients she said they were and asked me where I lived and which surgery I was with now. When I told her she laughed. She tried to cover it up but I had a pretty good idea why she was laughing. When I’d explained why I wanted to change surgeries she admitted she’d heard the story many times before.
“We’ve had an awful lot of patients coming to us saying the same thing,” she said.

Of course I wanted to check things out a little before I jumped ship. The cheery receptionist assured me I would usually be able to get an appointment on the day I called, they open early in the morning and one evening a week to help people who work. Although they have a second surgery a few miles away they prefer patients to stick to their own branch unless it’s an emergency. When I mentioned I’d been trying to book an epilepsy review and had been basically told there were no appointments she was incensed.
“That’s putting your health at risk,” she said. “I can’t believe she didn’t care when you said you’d have to miss the review.”

The difference between the treatment I got this morning and this afternoon were worlds apart. For years we have been putting up with rudeness and being made to feel we are an inconvenience when we try to get an appointment. This afternoon I found out there are polite, cheerful receptionists who actually care. I’m beginning to wonder why I didn’t change doctors before?