In the end CJ chose the river for our walk home from Hatch Grange, even though it was the longest route. With the sun in the sky and the rich vein of Autumn colour we seemed to have hit once we passed Allington Lane, I wasn’t complaining though.

The leaf covered path was slippery as we made our way down Gaters Hill but the light through the tunnel of leaves was so lovely we didn’t much mind walking slowly. At the river, we stopped momentarily to check the progress of the strange oak tree cut down after the winter storms. In spring I noticed a willow seedling had taken root in the cleft of the tree and the true leaves were also sprouting, making it a bizarre half oak, half willow hybrid. Since our last visit the large willow shoot has disappeared but a close look showed there are still both oak and willow leaves growing from the top of the tree. How it will finally end up is a mystery.

As we passed the bridge we could hear a commotion of the duck kind on the river below. Sure enough there were a group of ducks swimming about and a lot of loud quacking going on. Quite what the duck dispute was about was anyone’s guess but it turned out the lone white duck was the one making all the noise. 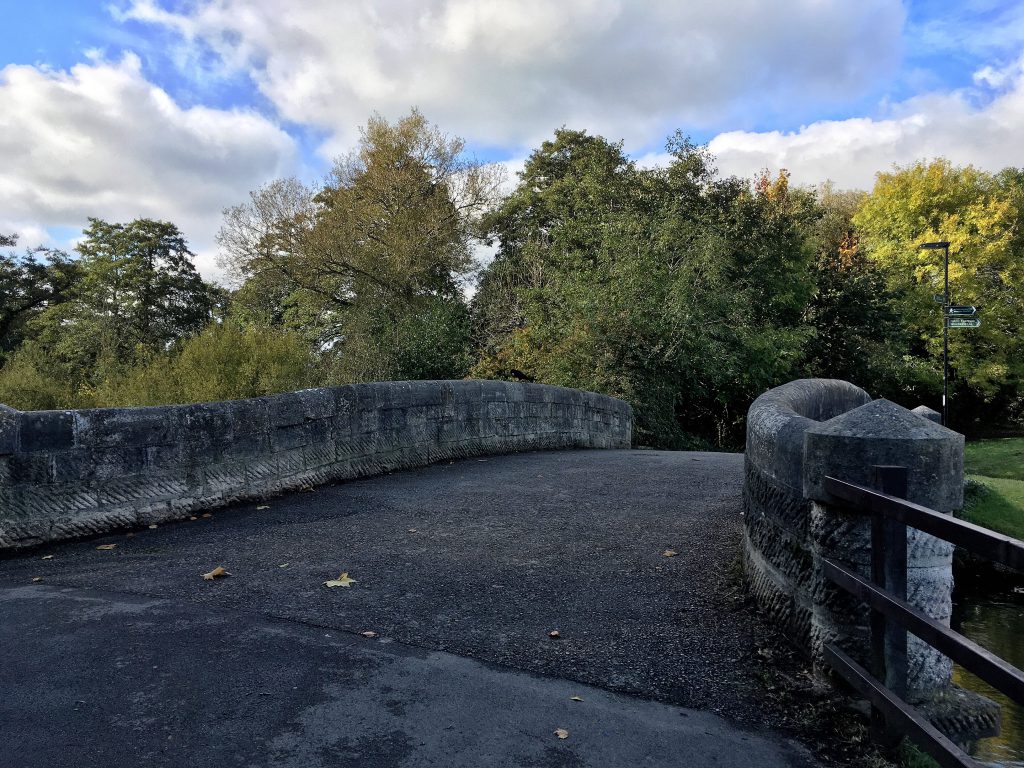 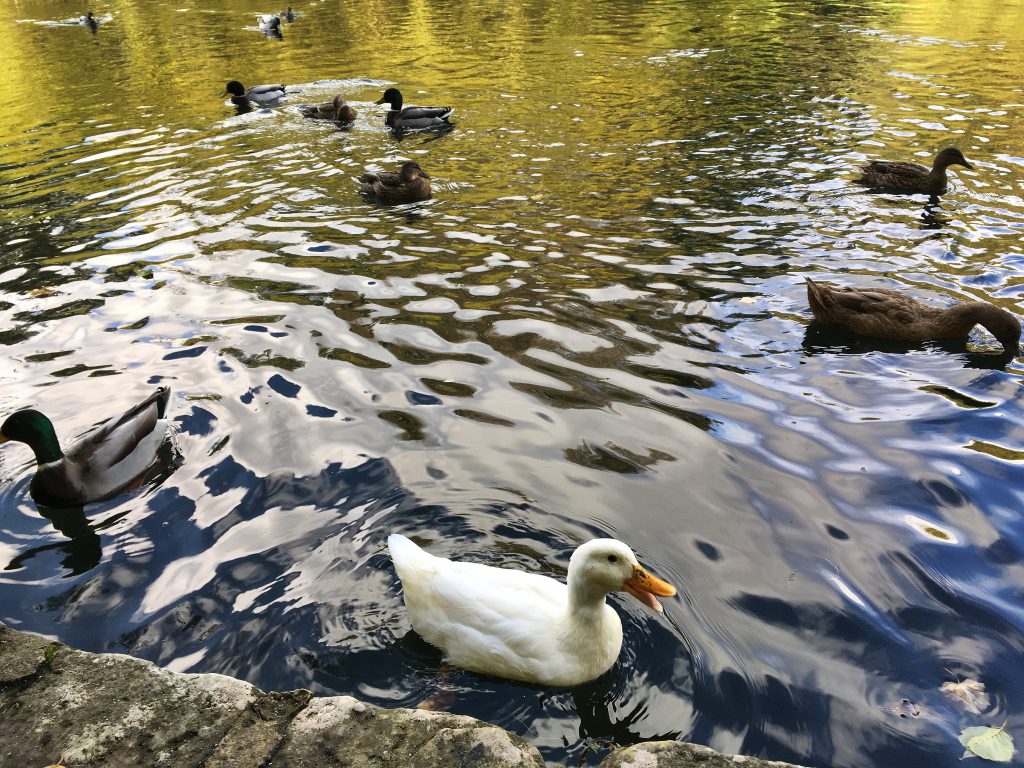 We left the noisy duck behind and carried on along the river where the line of maples stood out like flaming beacons. These are trees I always admire at this time of year but, having just been to Hatch Grange looking at the liquidambar tree I examined them with renewed eyes. It occurred to me these might not be the maples I’d always thought they were. Like most people I can identify an oak, a horse chestnut, a beech or a willow, but I’m by no means a tree expert. Until now I’d taken the star shaped leaves at face value but looking closely I could see round fruits with prickly looking spines. Even I know that maples and sycamores have keys not spiny fruits. 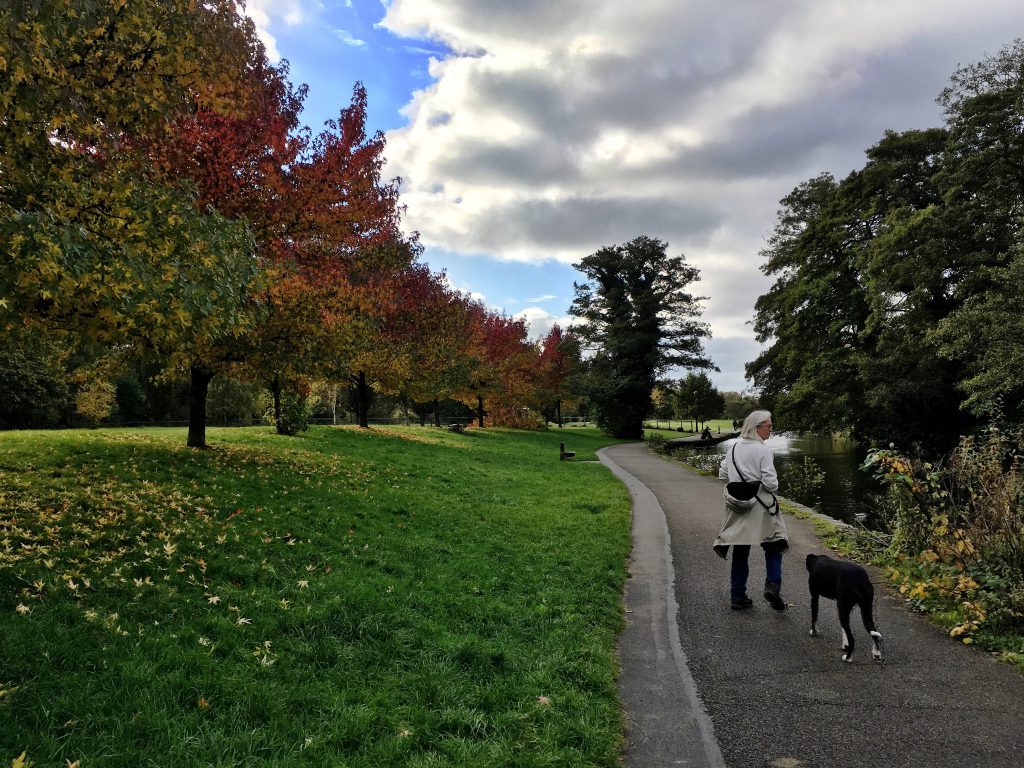 My suspicions were aroused and later Googling told me quite rightly so. The clincher was the arrangement of the leaves, maple leaves grow opposite each other in pairs, liquid amber leaves are arranged alternately. It seems these are actually liquid amber trees, not as big and grand as the one at Hatch Grange but just as colourful. Obviously I need to pay more attention to the trees I pass in future. It was difficult to tear myself away from these beautiful trees but we couldn’t stand in the park all day staring so, eventually, we set off again. After all that red and gold the trees lining the river seemed subdued with their green leaves, even if they were reflected in the still river water. On the other side of the park the trees lining River Walk were trying their best but they just couldn’t compete. It felt as if we’d left autumn behind by the bridge and were back in late summer. It wasn’t until we’d turned the corner and Woodmill was in sight that autumn colour returned with a vengeance. The trees here certainly got the memo that summer was over and were burnished and shining, creating stunning reflections in the Itchen.
“Walking back along the river was a good call,” I said to CJ as we crossed the road towards the mill. The trail behind the reed beds was nowhere near as bright but the sprinkling of fallen leaves on the ground, like lemon and lime confetti, made it worth the short detour. If we hadn’t walked that way we’d have missed some first class fungi too. Nestled in a hollowed out tree trunk were two generations, one spent and blackened, the other fresh and new. 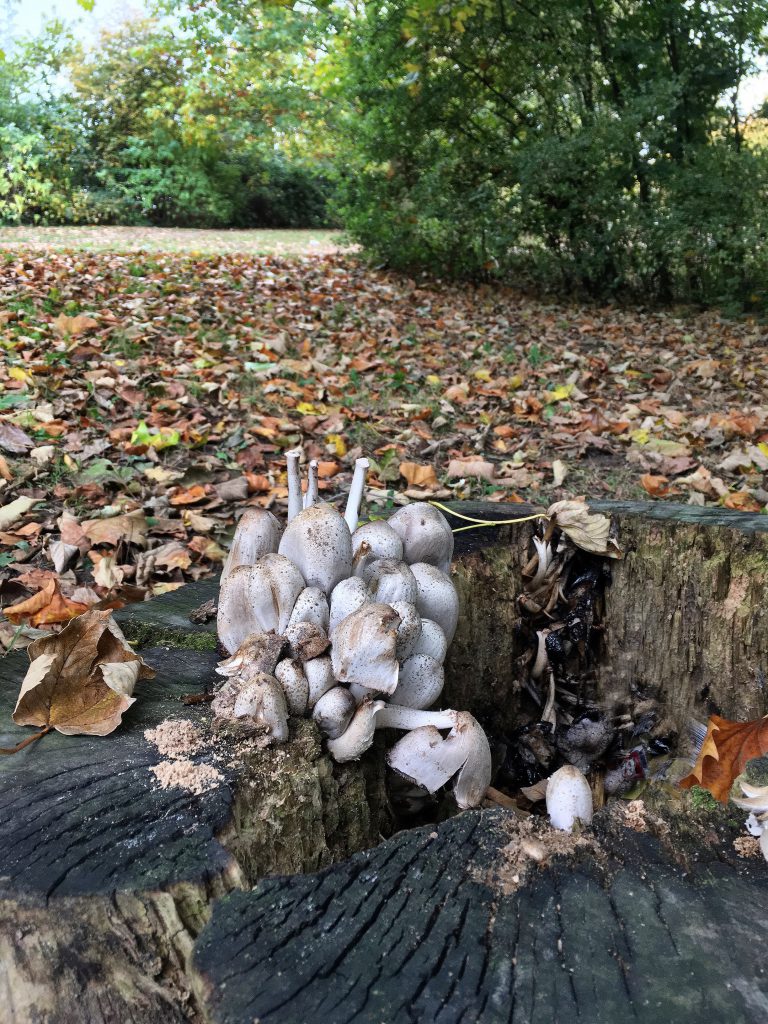 “I saw something on TV the other night about a man who takes time lapse photographs of fungi,” I told CJ as we walked on. “He finds a young specimen in the woods, digs it up and takes it back to his studio where he builds a set around it and created the optimum environment for growth using sheets of plastic. The films were stunning.”
“I wish I’d seen that. I’ll have to see if I can find it on the internet.” 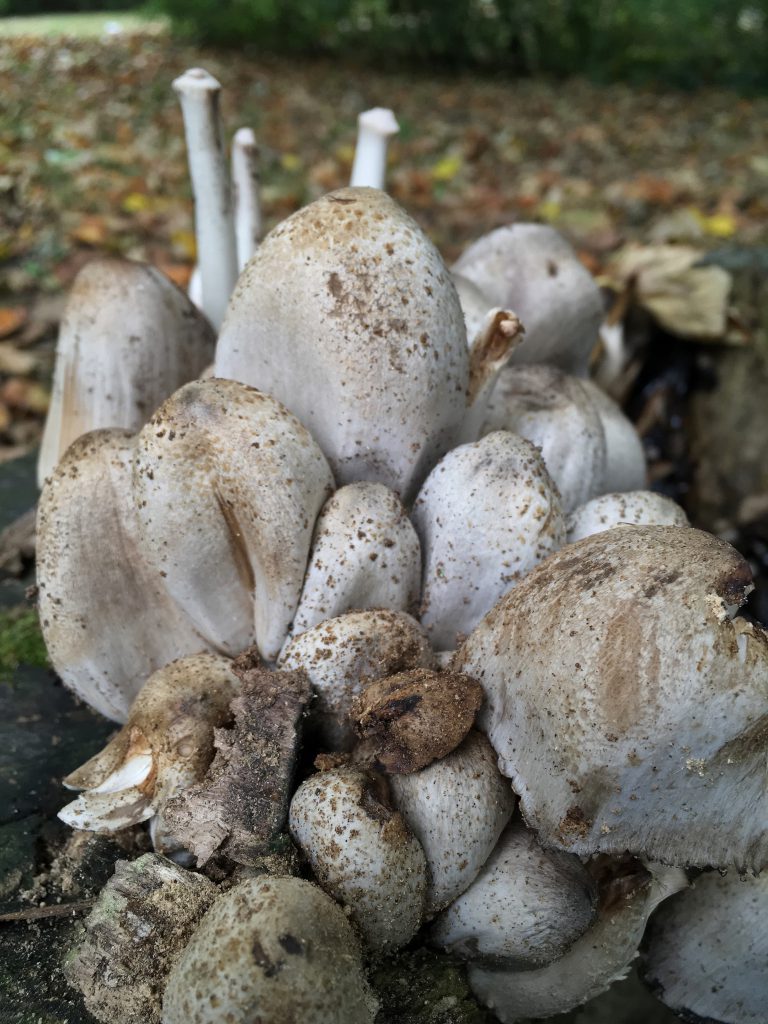 The golds and russets were back once we passed the roadbeds and got back to the river again. The poplars had leaves of yellow ochre and had sprinkled many of them on the path. More fell on us as we passed beneath them. Between them the humble little crab apples were my favourite though. Their leaves were a patchwork of every shade from dark green through to deep burgundy red. Once the leaves have gone we will have the little round fruits to look forward to. As the year comes to an end they take on the appearance of christmas baubles strung on the bare branches. 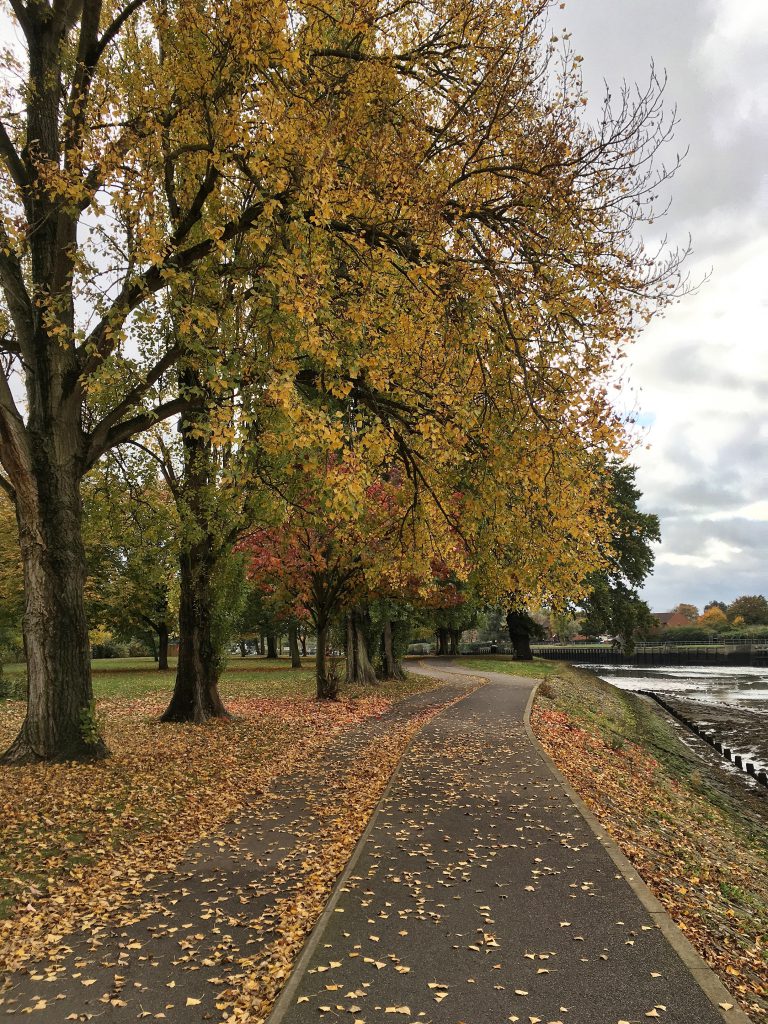 Of course, it wouldn’t have been a walk along the river without a swan or two and, when we reached the jetty they were there in force despite a lack of people throwing them food. The mute swan cygnet we saw the other day was there, along with a full complement of black swans and their cygnets. Between them there were enough ducks and gulls to make dragging CJ away a difficult job.

We set out this morning in search of autumn leaves. Thanks to the liquid amber, the poplars and the little crab apples our search was not in vain. Spring may be my favourite season but you can’t beat a bit of autumn colour, especially not along the river.

8 thoughts on “Autumn leaves along the river”