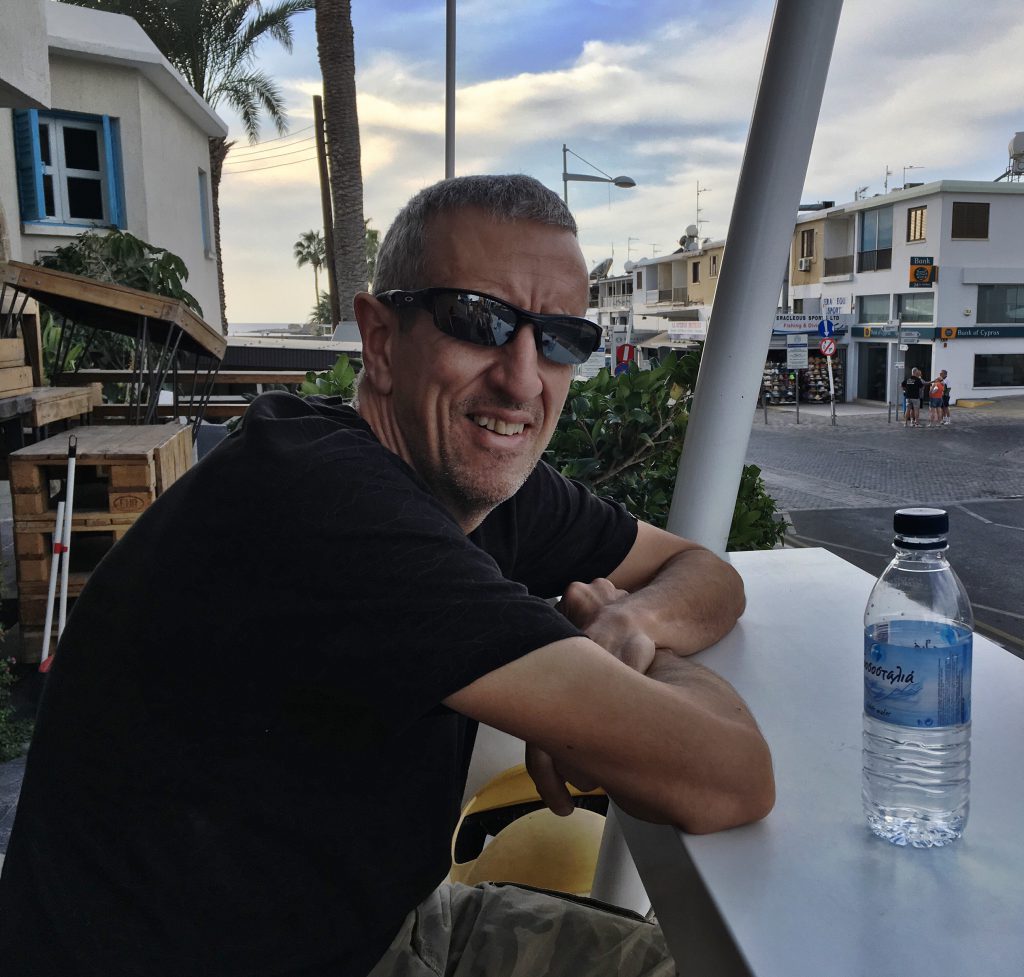 By the time I got back to the hotel, the sky had clouded over. Not thick grey clouds like the ones at home in England you understand, but a gauzy layer like a thin voile curtain pulled across the blue sky. Commando woke up and decided, in the absence of searing rays burning his skin to a crisp golden brown, we should ‘do something.’ That something turned out to be a bus trip to Paphos to find food and have a wander.

The bus stop is right opposite our hotel. Every twenty minutes or so, there is a bus to Paphos and probably beyond. The journey cost us just over £1 each, far cheaper than the UK. The stop start drive through streets both familiar and strange at the same time was pleasant enough, although to Commando’s dismay, the sun seemed to have come out again, the veil of gauze pulled back, albeit briefly.

Our last Cypriot holiday ended in Paphos harbour, sitting by the water drinking coffee and getting the last of the sun before we flew home. This time we headed left when we got off the bus and strolled up the hill in search of somewhere to eat. In November, it turns out, a great deal is closed. In the end we found a little place selling kebabs and wraps and sat eating them watching the world go by. 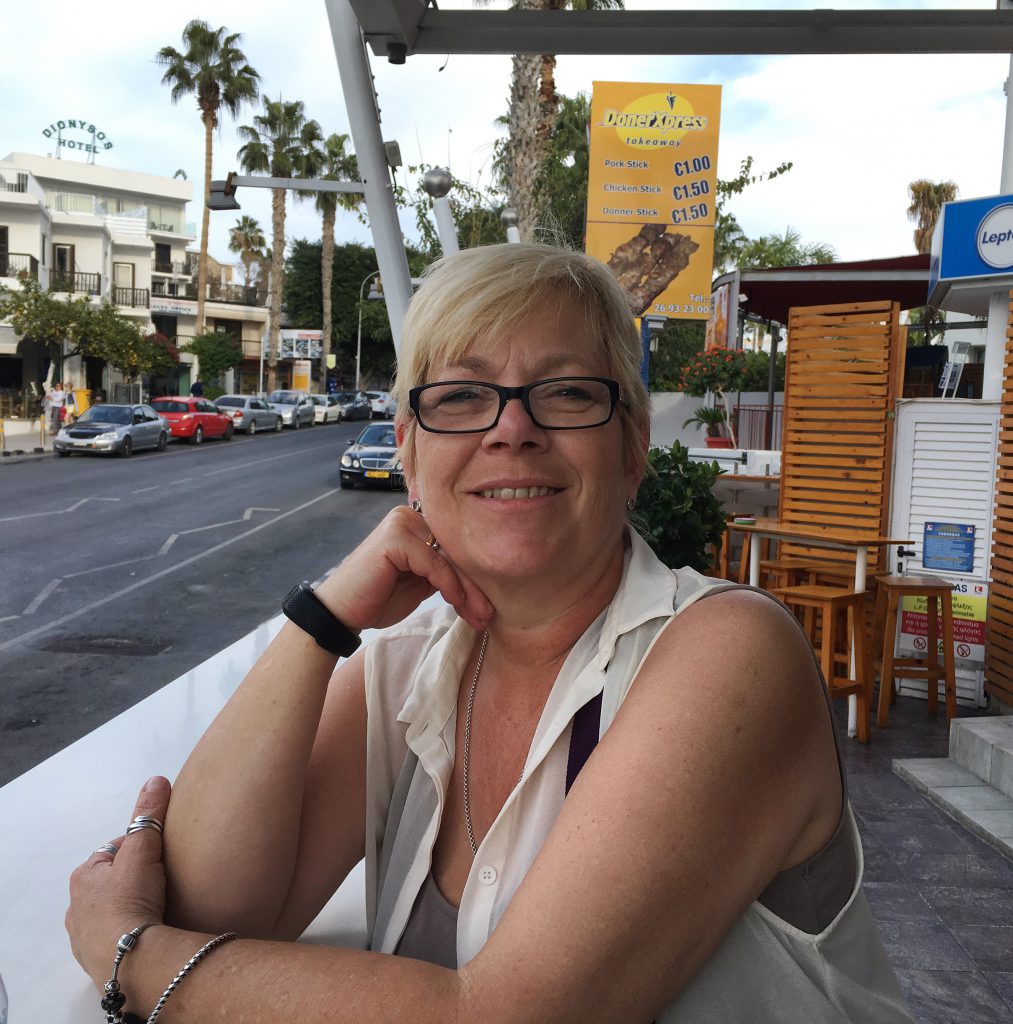 Our hunger satisfied, we wandered back towards the harbour. On the sea front, at the end of a stone jetty, we found an interesting bronze sculpture. Called The Little Fisherman, it depicts a young boy, more or less life sized, holding a huge fish behind his back and is part of an arts project called Signs In Time And Space. The work is by local artist Yiota Ioannidou. Something about the boy’s expression was quite haunting and we stood looking at him for some time. 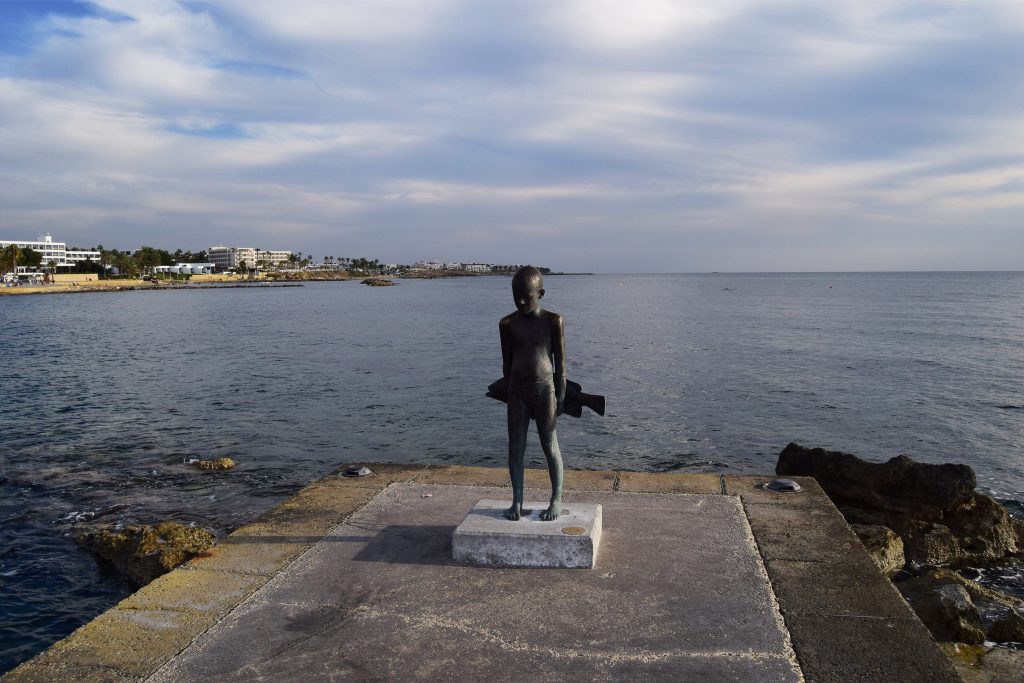 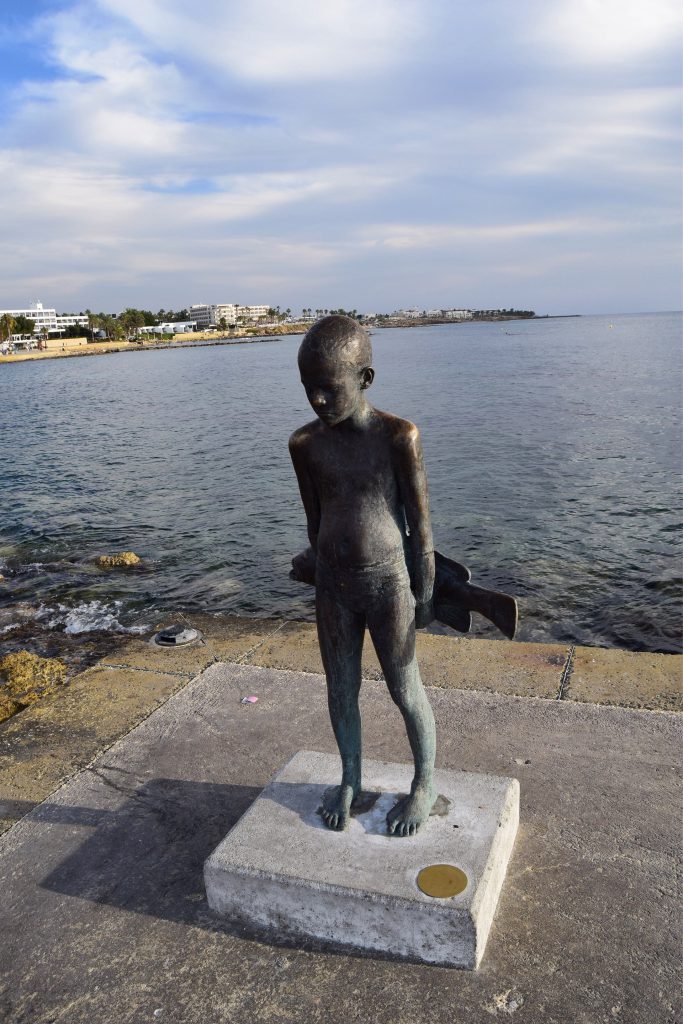 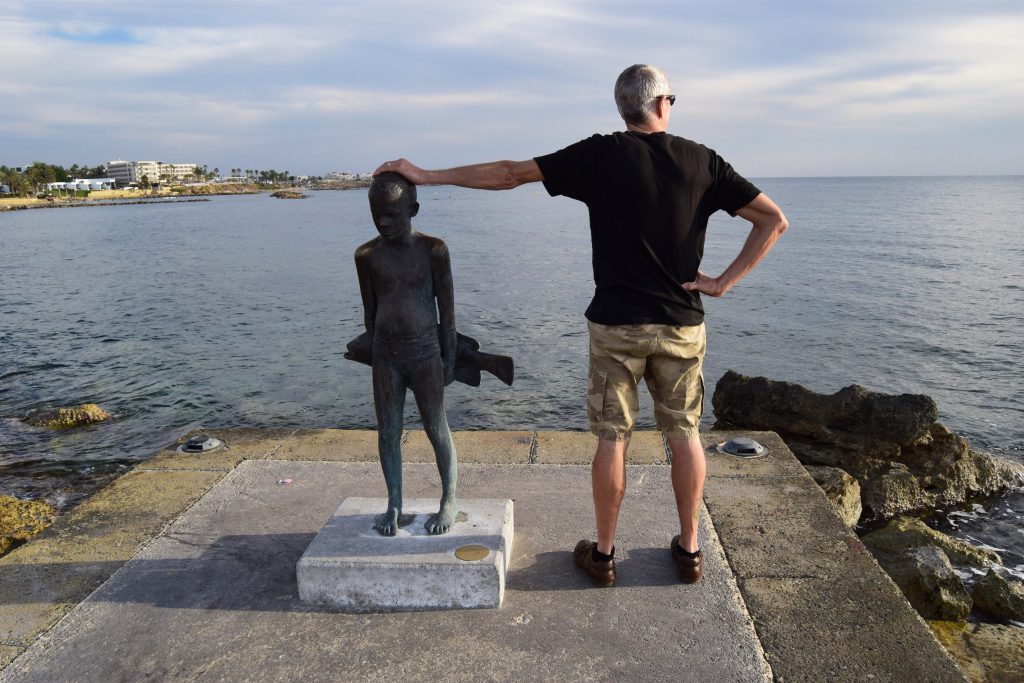 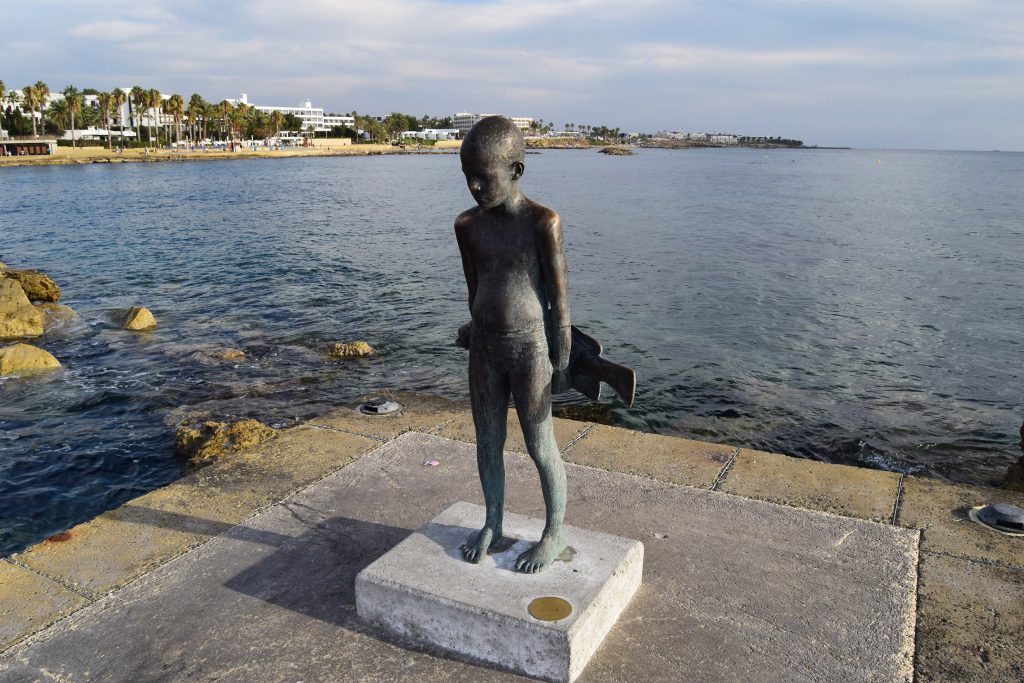 We carried on, with a few stops along the way to look at all the colourful souvenirs in the shops we passed and the view across the sparking sea, towards the harbour. A new clock has been installed at the harbour entrance since our last visit, a tall tower of oxidised steel with words cut into its sides. Of course they were in Greek so we couldn’t read them but later Googling revealed the Swiss made clock is just over a year old, was designed by architect Costas Koutsoftidis and is, in part, a memorial to the wife of Cypriot businessman Sotiris Chatzimina. The tower is also a landmark and symbolises a rebirth for the town. At night it is illuminated but, sadly, we wouldn’t be around to see that. 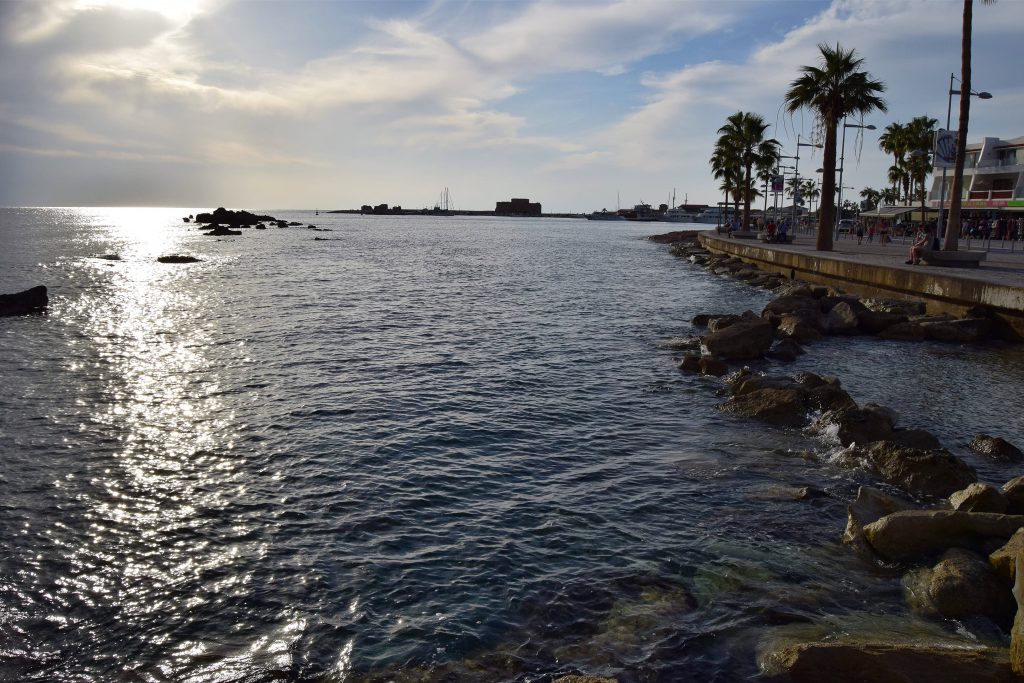 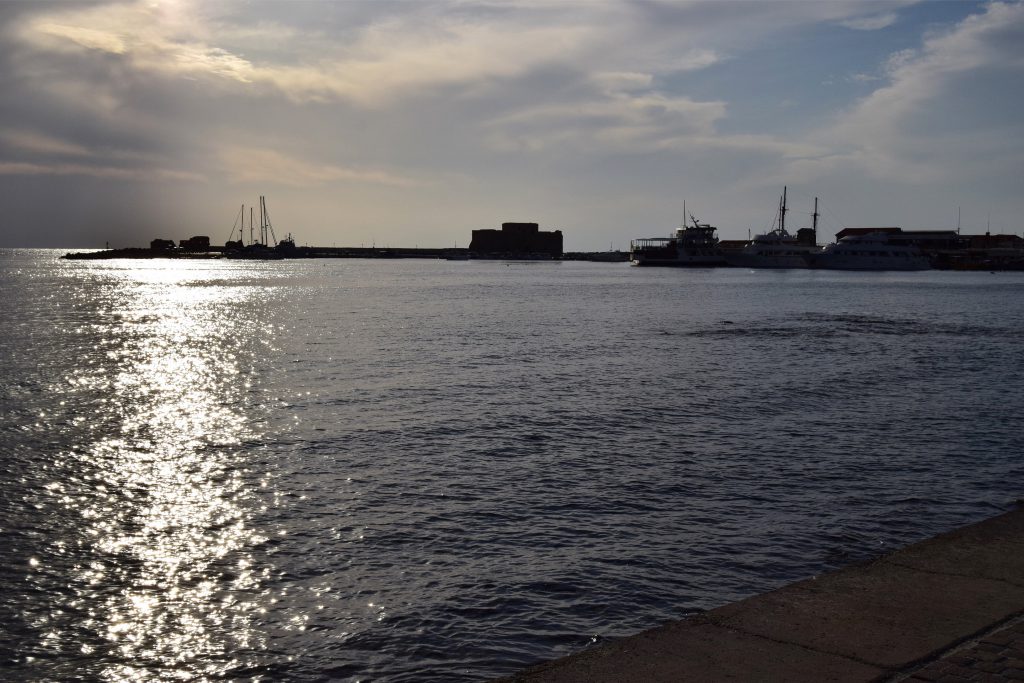 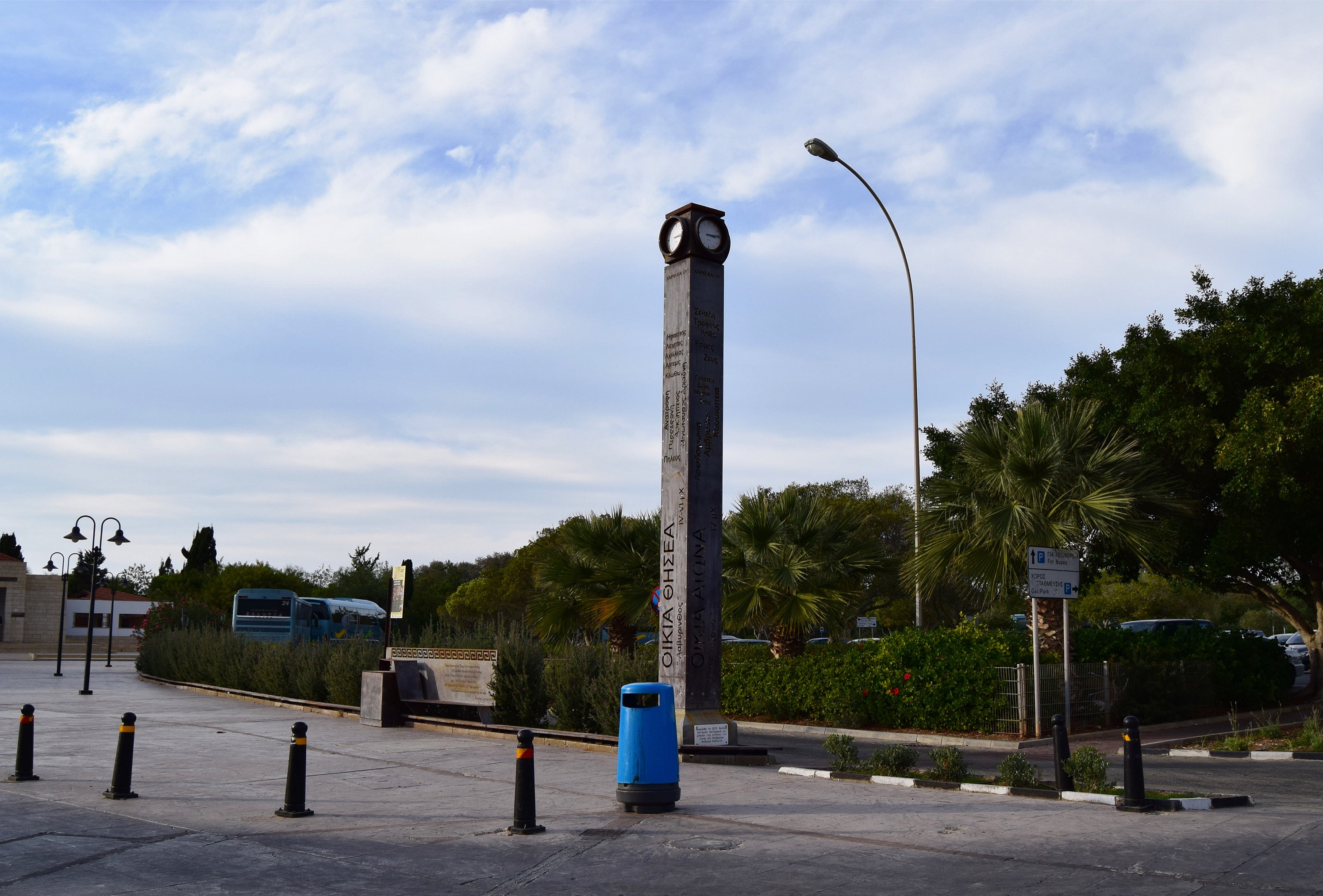 The harbour is filled with cafes and restaurants, each with tables overlooking the water. They looked so tempting we stopped at one for coffee and a rest. It was nice to sit beside the sea not having to worry about flights to catch unlike last time when we’d been clock watching and trying to grab some last rays before we went home. We also had some interesting vessels to look at as we drank. There was a large sailboat and a weird kind of half submarine half fish that looked as if it the was based on the Nautilus, the vessel in the 1954 film 20,000 Leagues Under the Sea. 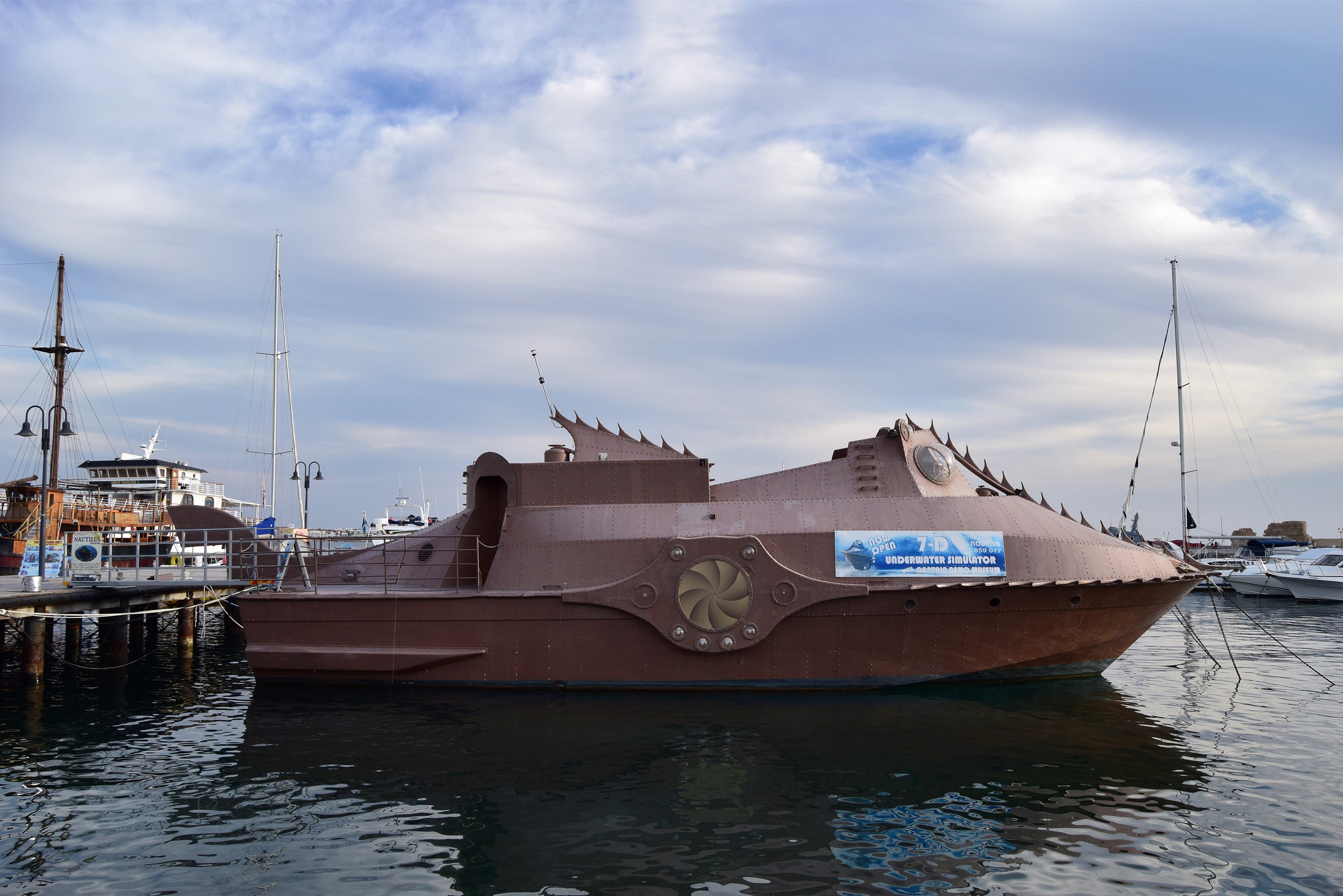 As we sat drinking our coffee I noticed a sign on the weird submarine. It actually was called Nautilus, and featured a Captian Nemo Museum. Later, a little Googling told me this was actually a 7D entertainment presentation system. Ok, so I was none the wiser until I read more and found out it’s a combination of 3D film, chair movement and effects sugh as wind blowing, water spraying and the like. Perhaps if we’d known at the time we’d have checked it out. More Googling told me the sailboat is called The Jolly Roger, after the pirate ship in Peter Pan, and it’s owned by Paphos Sea Cruises. Apparently it can be booked for coastal cruises, wedding receptions and events. 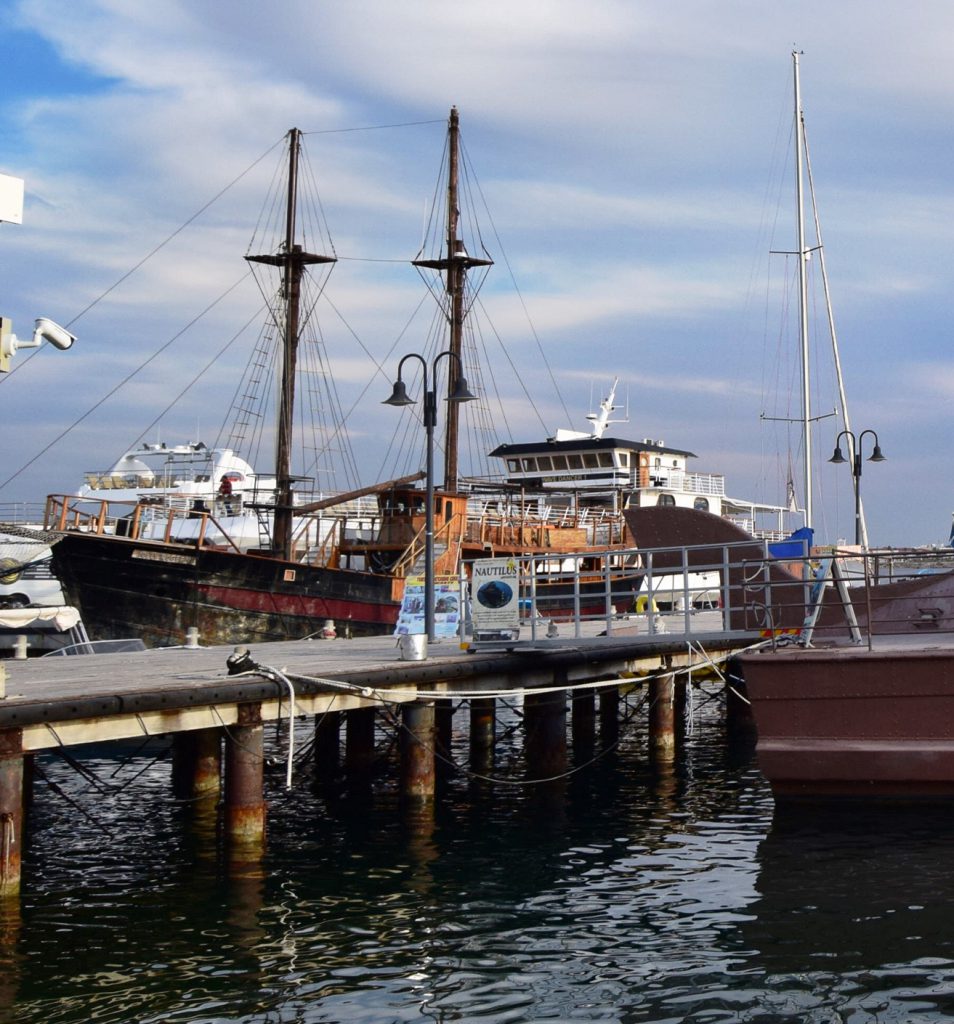 Our waterside seats were directly opposite the offices of the Port Marine Police, housed in an attractive building built of stone blocks. As one of their main activities is catching pirates and smugglers it seemed ironic they had a pirate ship right in front of them. Perhaps they hadn’t noticed? 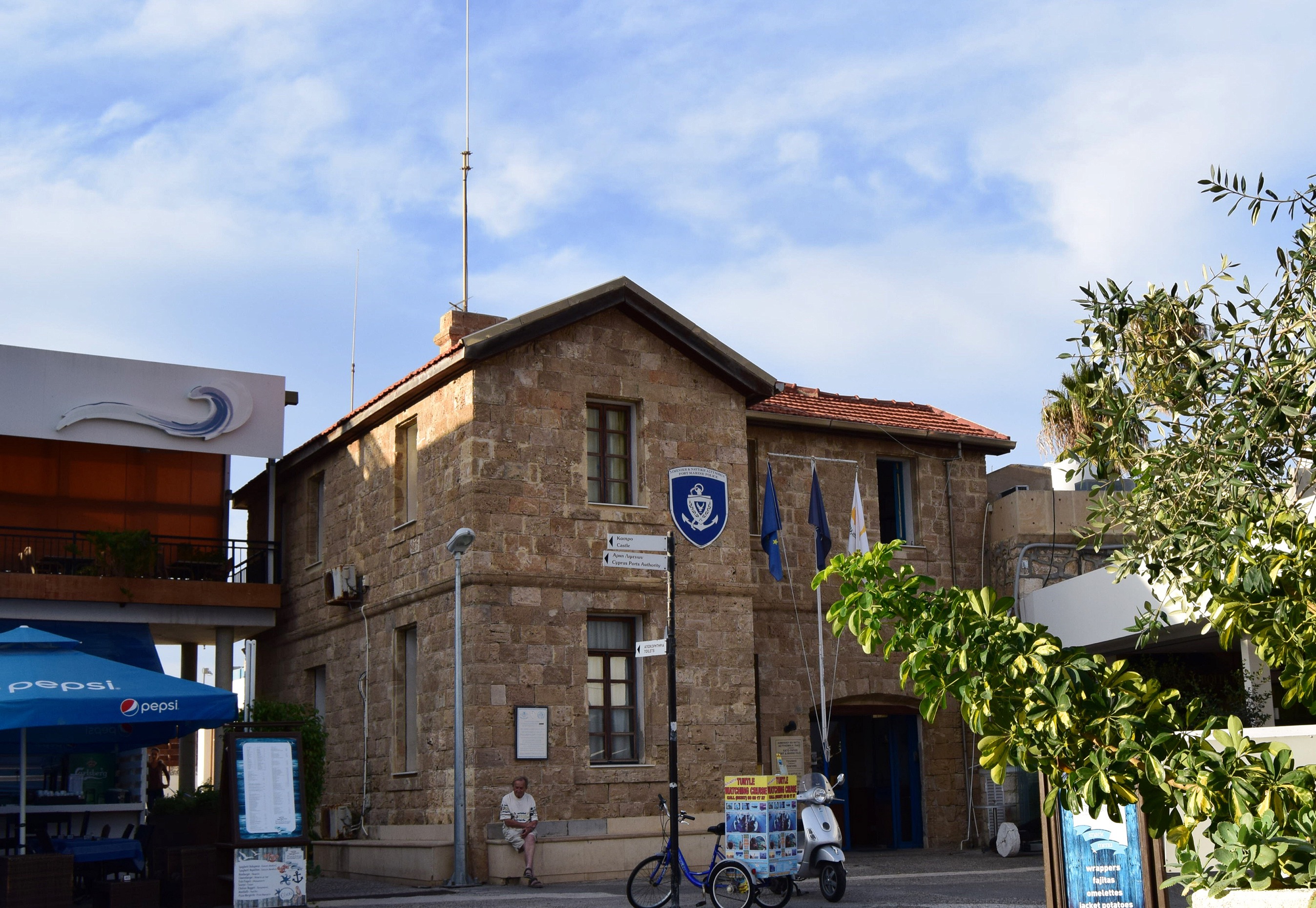 Once we’d finished our drinks we took a short walk to the castle. This was something I did remember from our previous trip to Paphos. It is a castle of several incarnations, reflecting in part, the fortunes of the island. Built in the Middle Ages as a Byzantine fort to protect the harbour, it was destroyed by an earthquake in 1222. The French House of Lusignan, who ruled Cyprus at the time, rebuilt it but it was dismantled in 1570 by the Venetians. When the Ottomans captured the island they restored and strengthened the building. 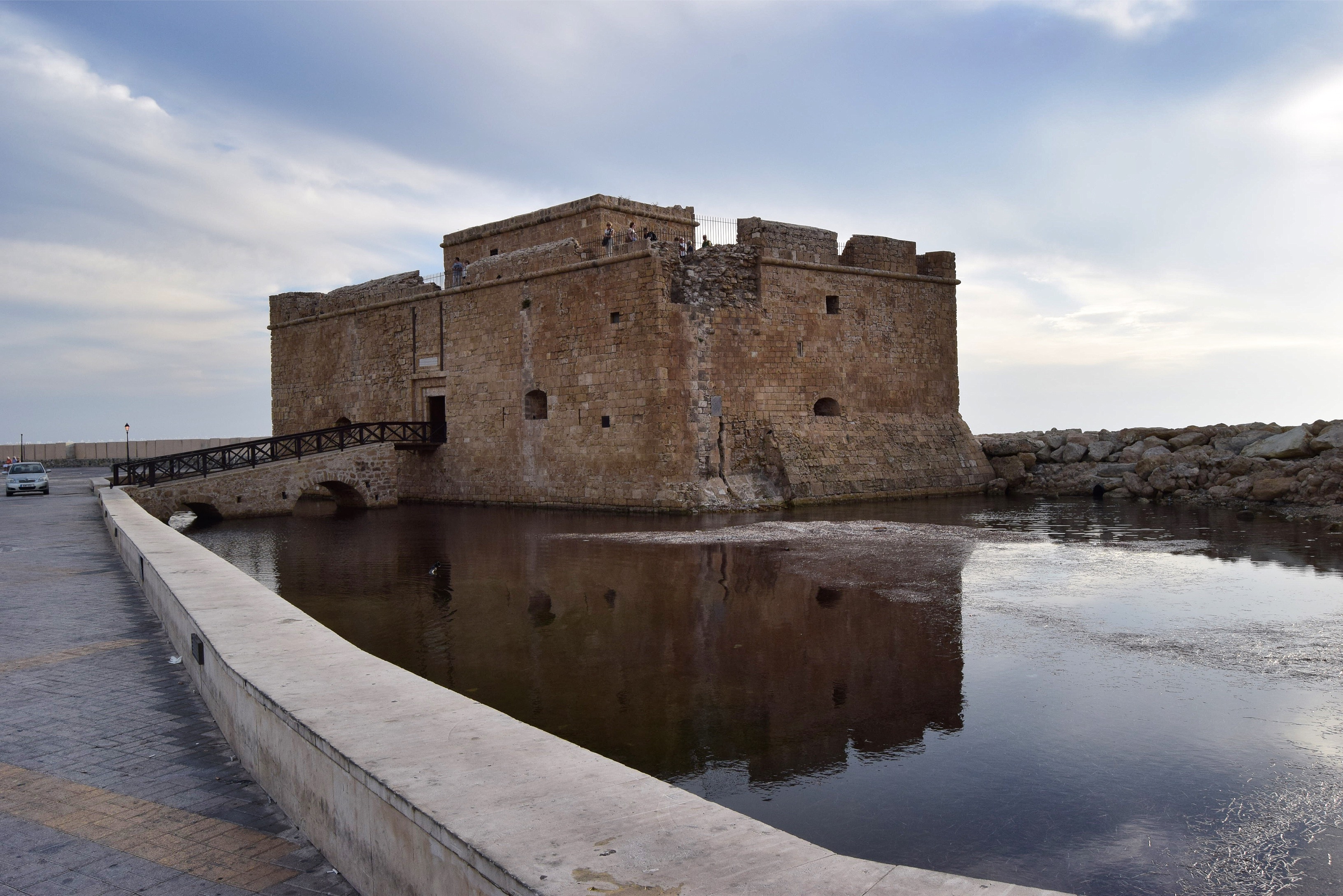 As you’d expect from such an old building, it has served many purposes over the years. It began life as a protective fortress, was used as a prison, a warehouse and even a store for salt. These days it’s a tourist attraction and a wonderfully historic landmark. We walked around it looking up at its scarred walls and laughing at the smelliness of its moat, which reminded me of the one at Portchester Castle. Perhaps all medieval moats are a bit whiffy? 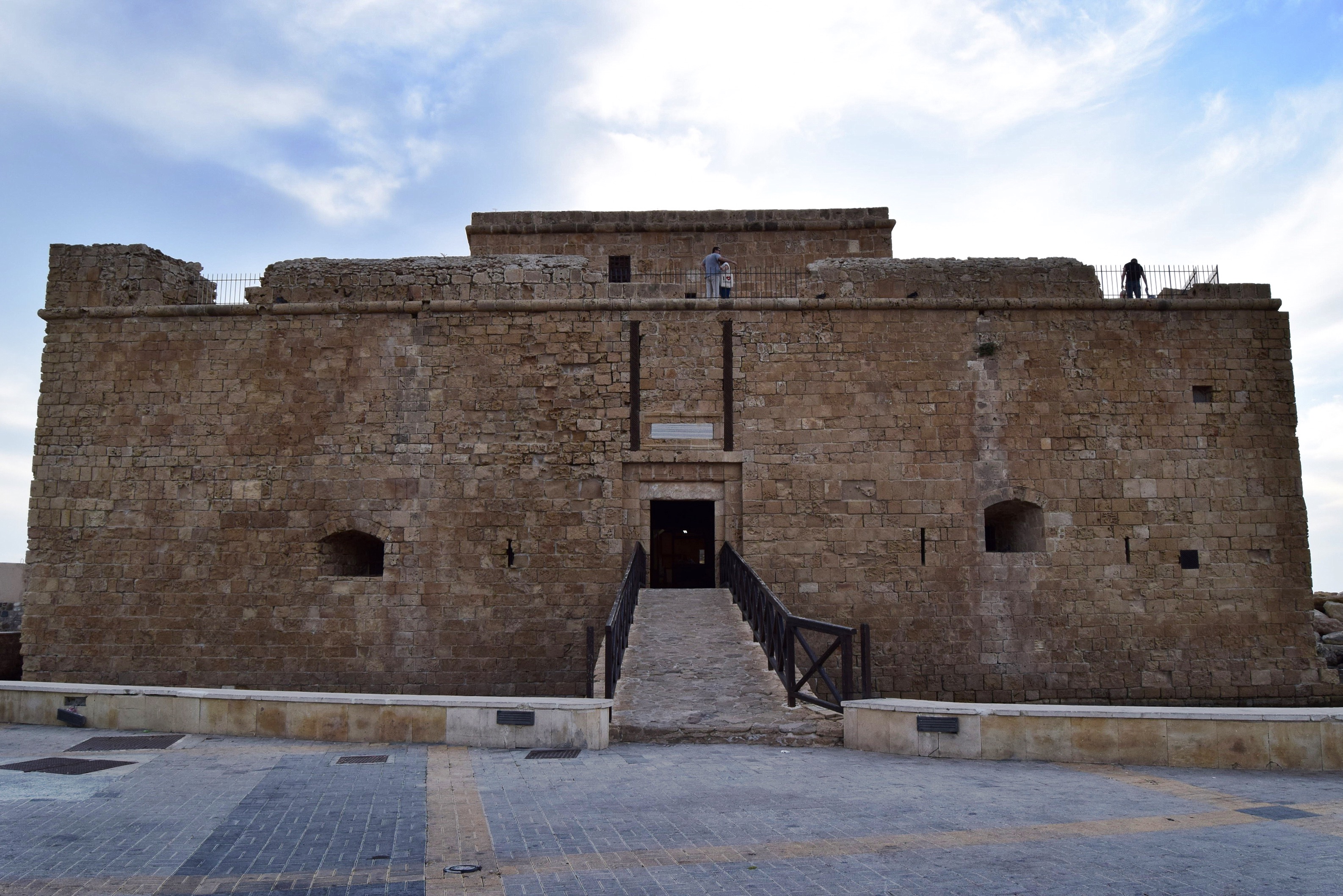 For a few euros we could have gone inside and climbed onto the battlements where I’m sure we’d have had some wonderful views. The time was getting on though, the sun sinking low in the sky, and we weren’t exactly sure when the last bus back to Coral Beach left. In the end we strolled to the very tip of the harbour looking at all the boats and idly discussing which we’d buy if we won the lottery and where we’d go in it. 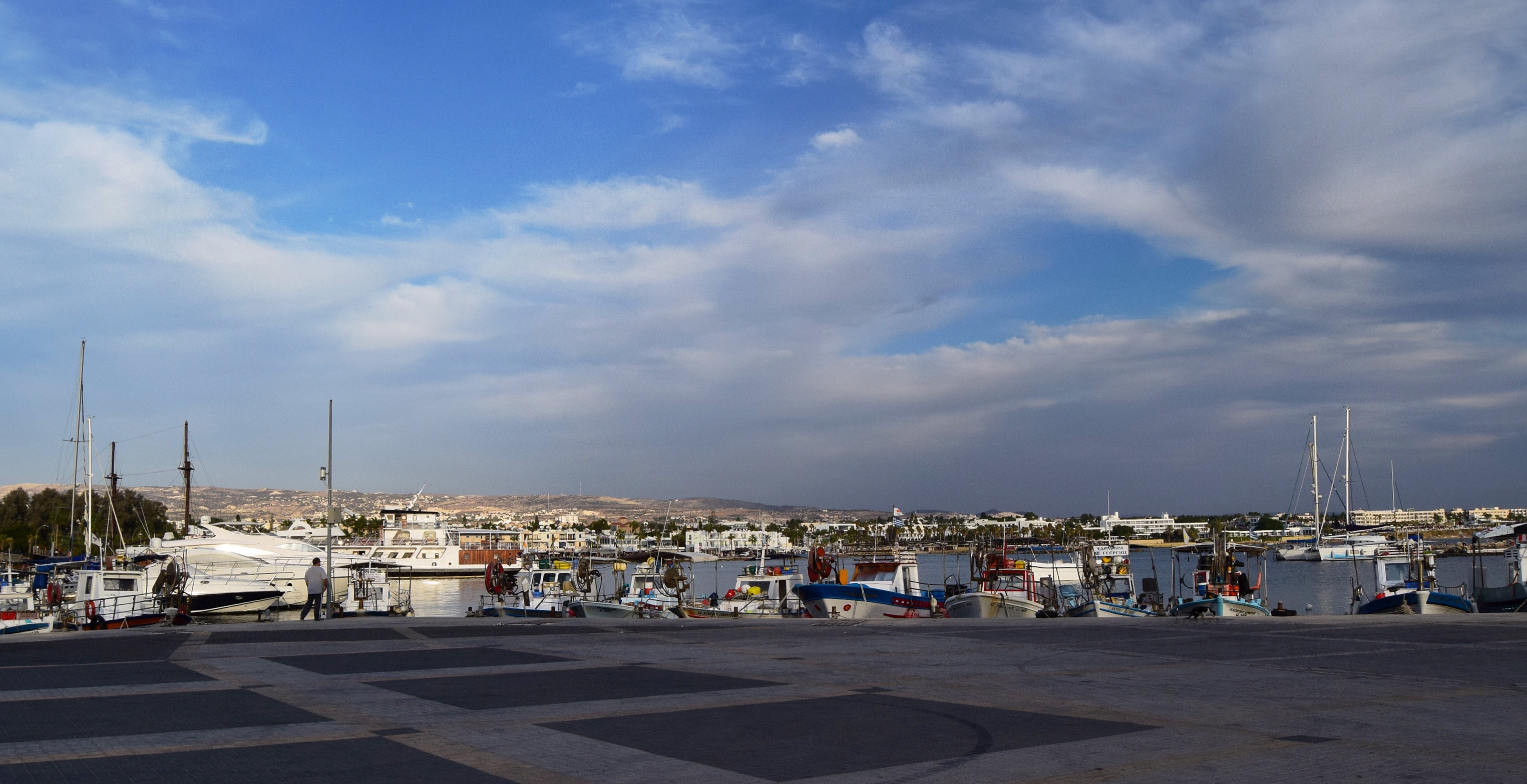 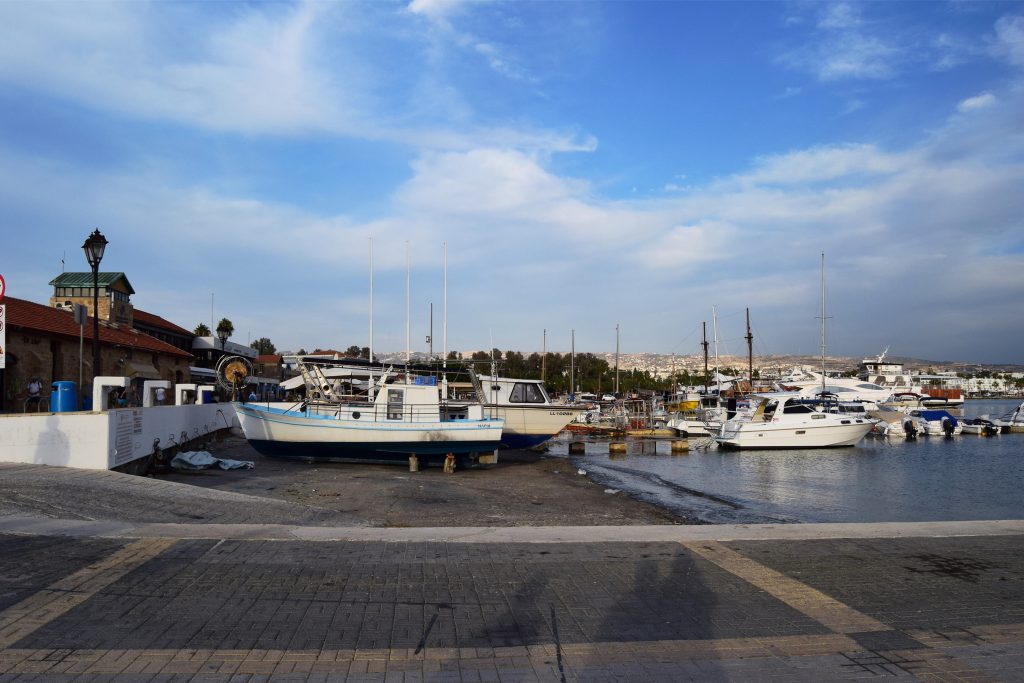 By now it was after four o’clock and the short November days meant the sun would soon be setting.  We walked back along the harbour wall, past the amphitheatre, and sat for a while looking at the castle from the outside. Huddled behind a hump of rocks with an arched walkway leading to its door and the late sun glistening on its moat it was a pleasant view. 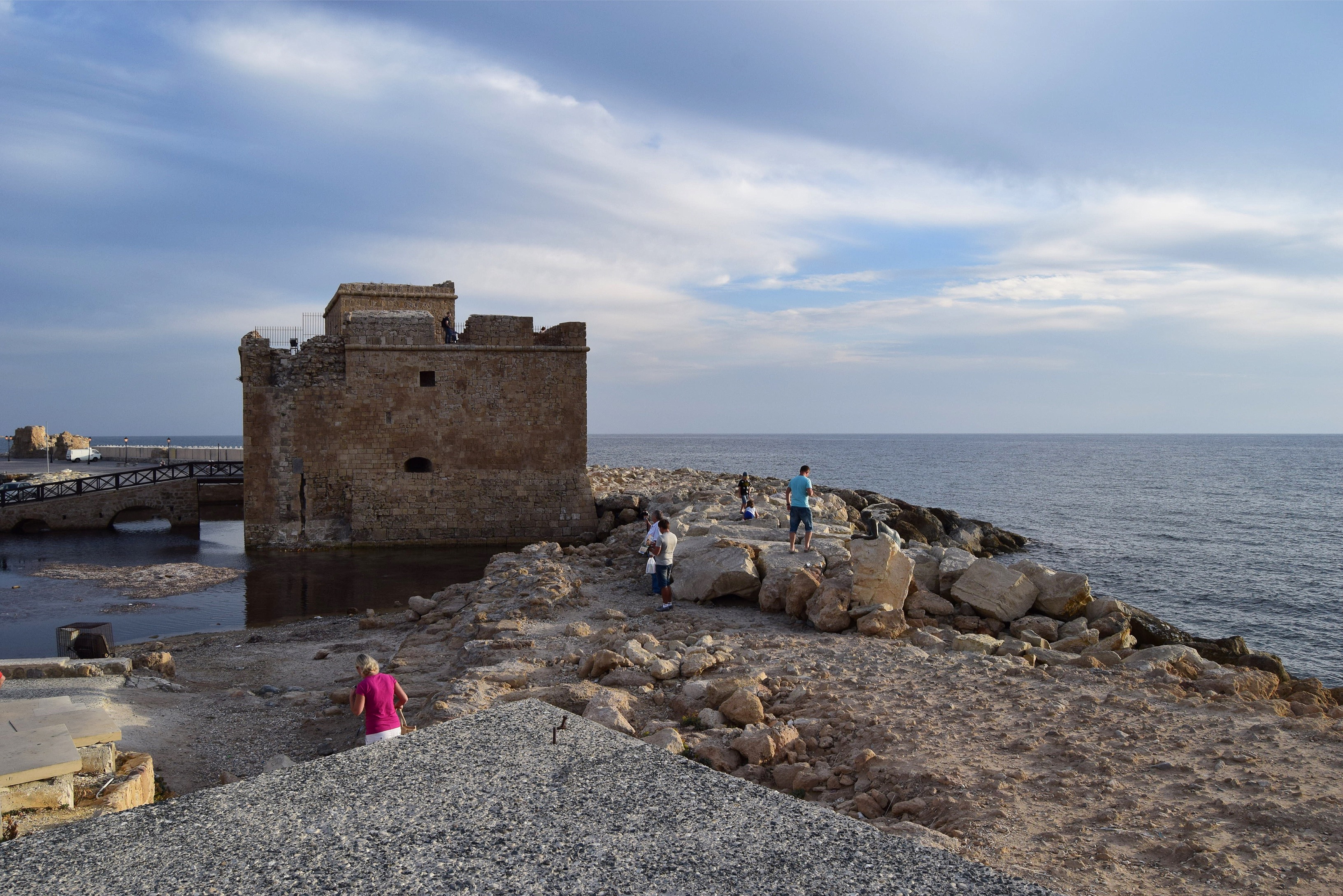 People were clambering over the rocks and, watching them, I noticed another sculpture, a bronze woman lounging on a large rock, her face lifted towards the sun. This was another in the Signs In Time And Space series, also by Yiota Ioannidou. It is called Sol Alter and pays homage to Aphrodite, goddess of love. Apparently it took her a year to make but it is quite beautiful, even if I did have to climb on the rocks myself to get a good shot. 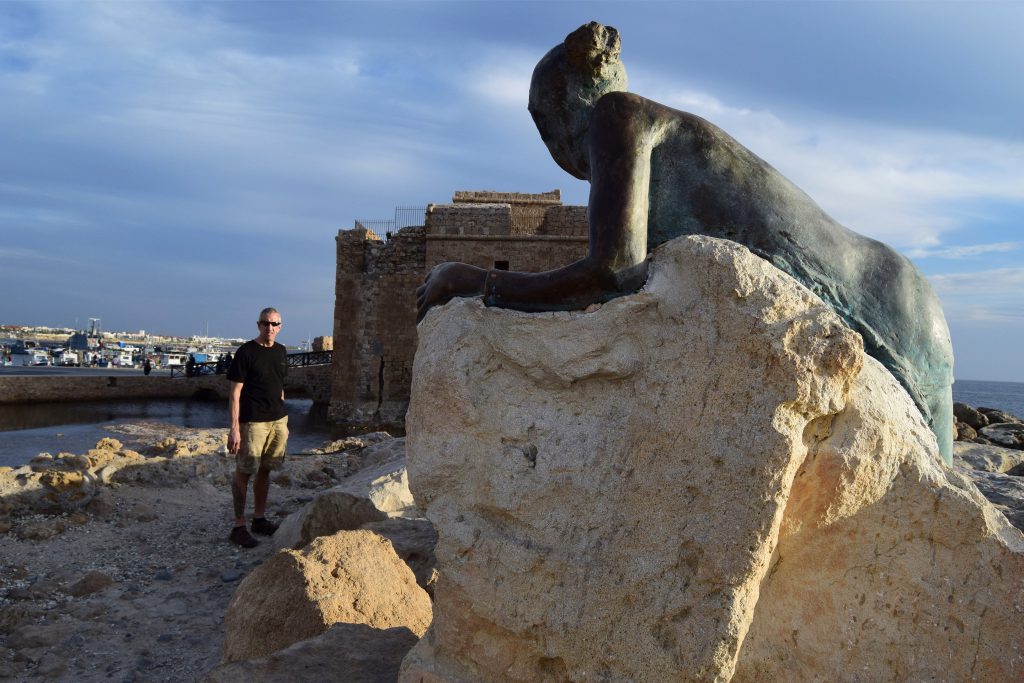 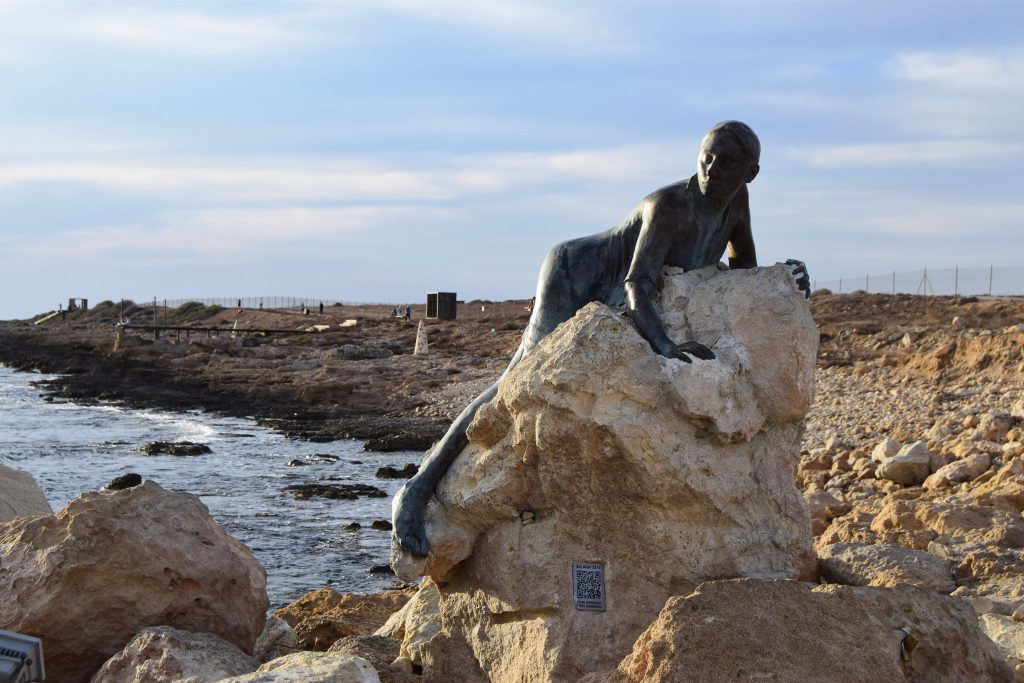 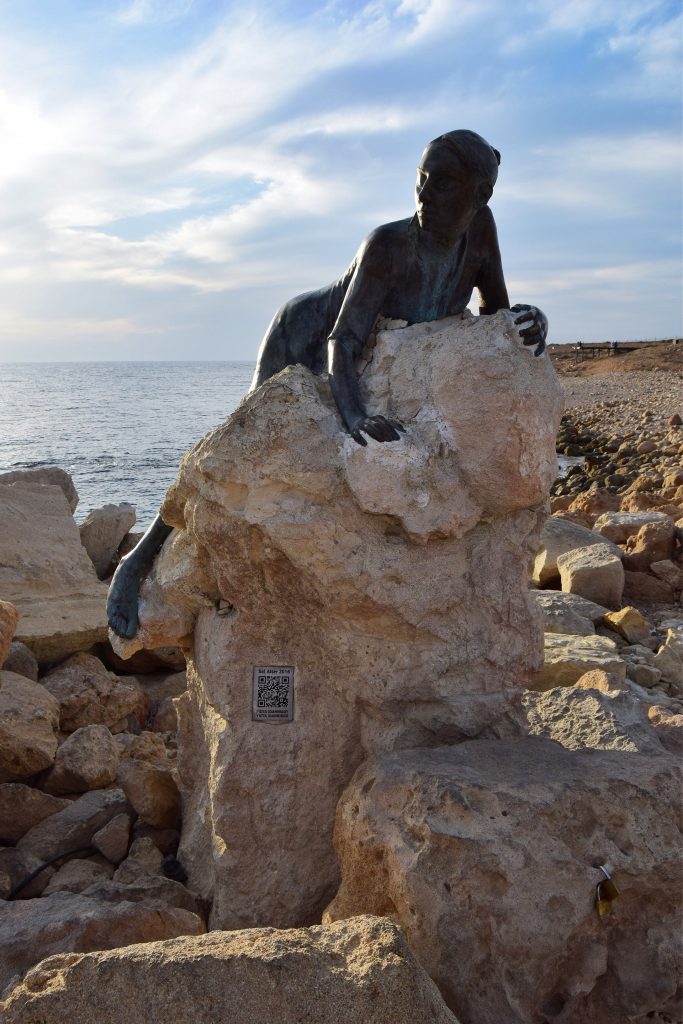 By now the light was beginning to fade so, with one last look back at the castle,  we headed towards the bus stop. We’d just stopped to look through a doorway at a very Banskyesque painting, when we bumped into Eddie and Sue.  They were on their way back to the bus stop too so we joined them in a slow stroll. 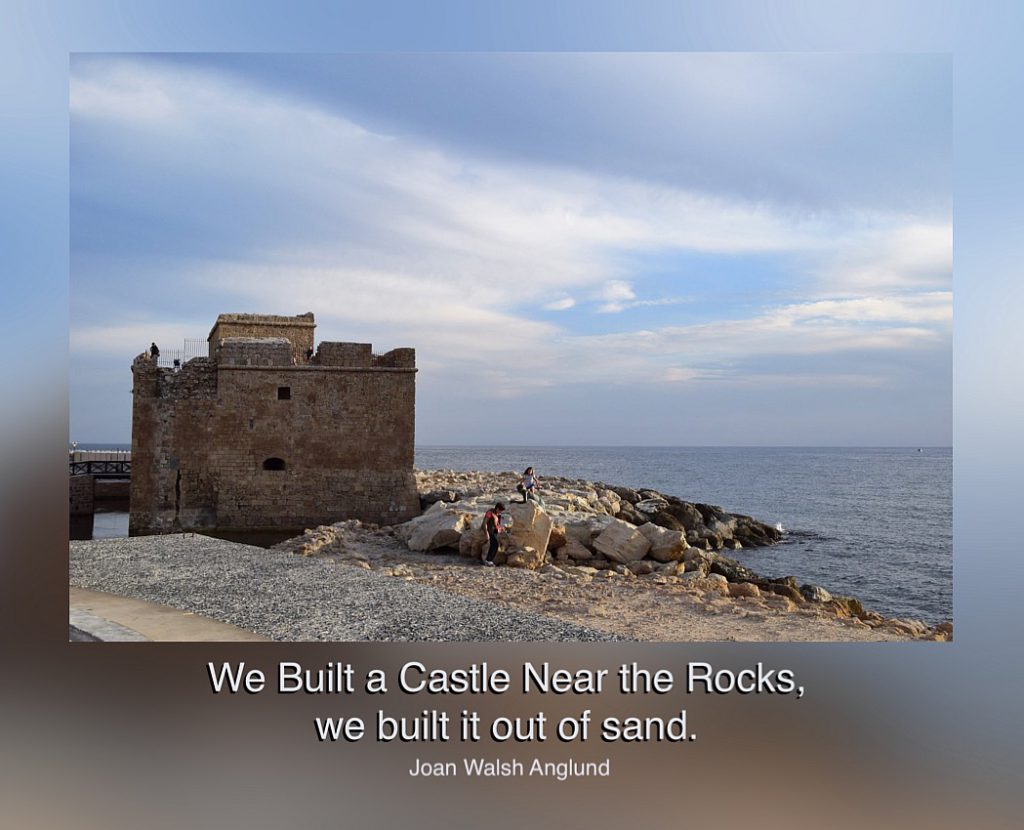 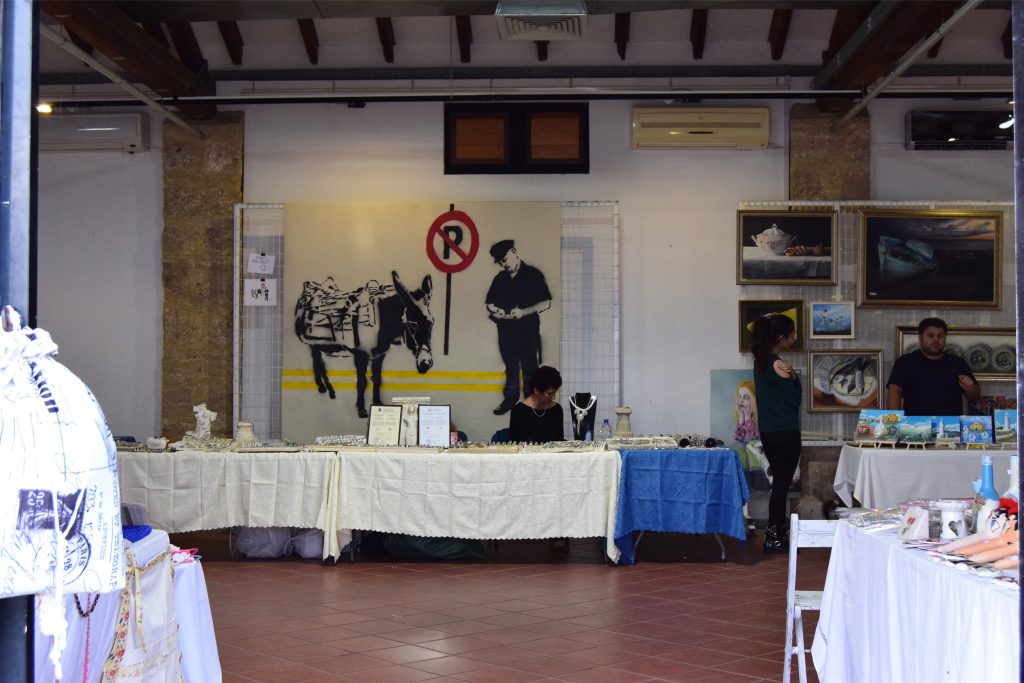 Both Eddie and Sue had completed the Cyprus Four Day Challenge several times so Commando took the opportunity to pick their brains on the journey back to Coral Bay. Eddie, down to earth with a northern accent that owed a lot to Manchester, was planning to walk the events as heart surgery and COPD mean he can’t run like he used to. Sue, who followed every sentence with an endearing little giggle and looked as if one puff of wind would blow her way, was running. As we drove the nine miles along the coast I tuned out the running talk and looked out of the bus window. The sun was slowly setting. By the time we got back to our balcony it was gone for the day but an orange glow on the horizon reminded us it would be back in the morning when we had another day of adventures ahead of us. 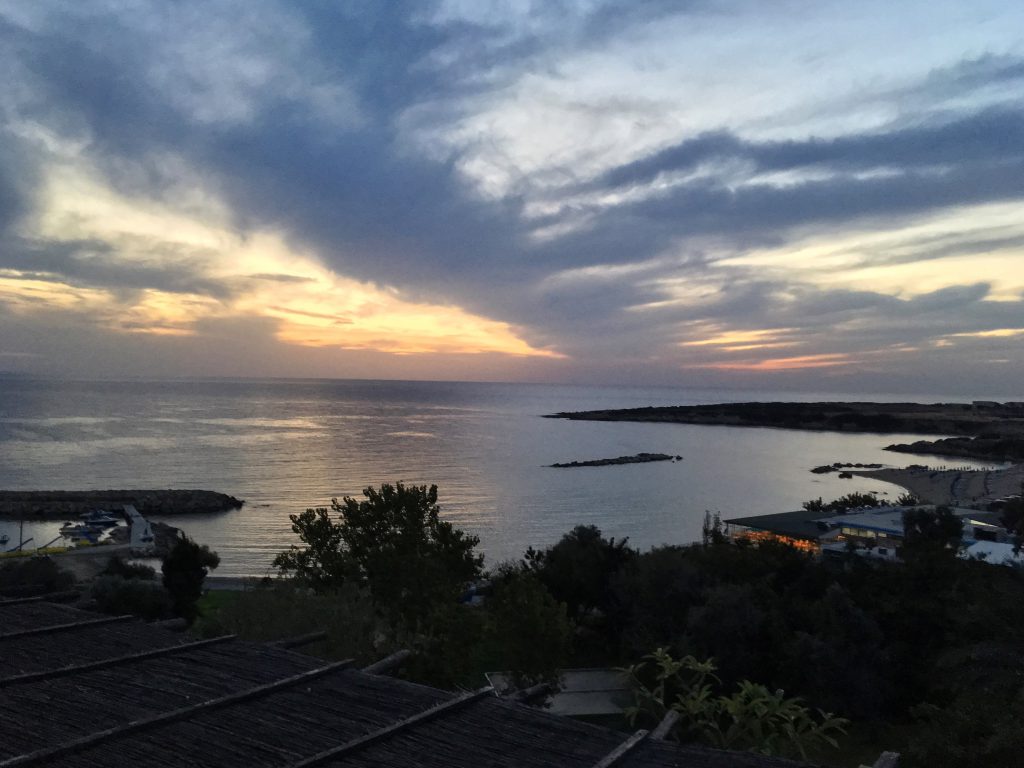 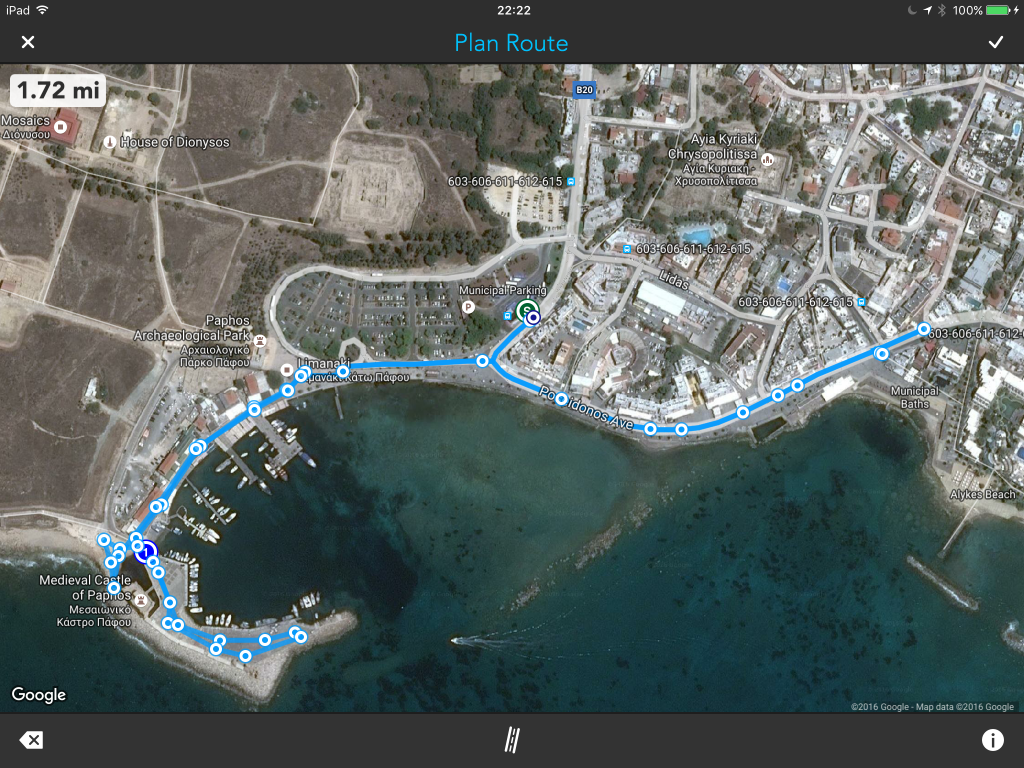 8 thoughts on “a bus trip to Paphos”