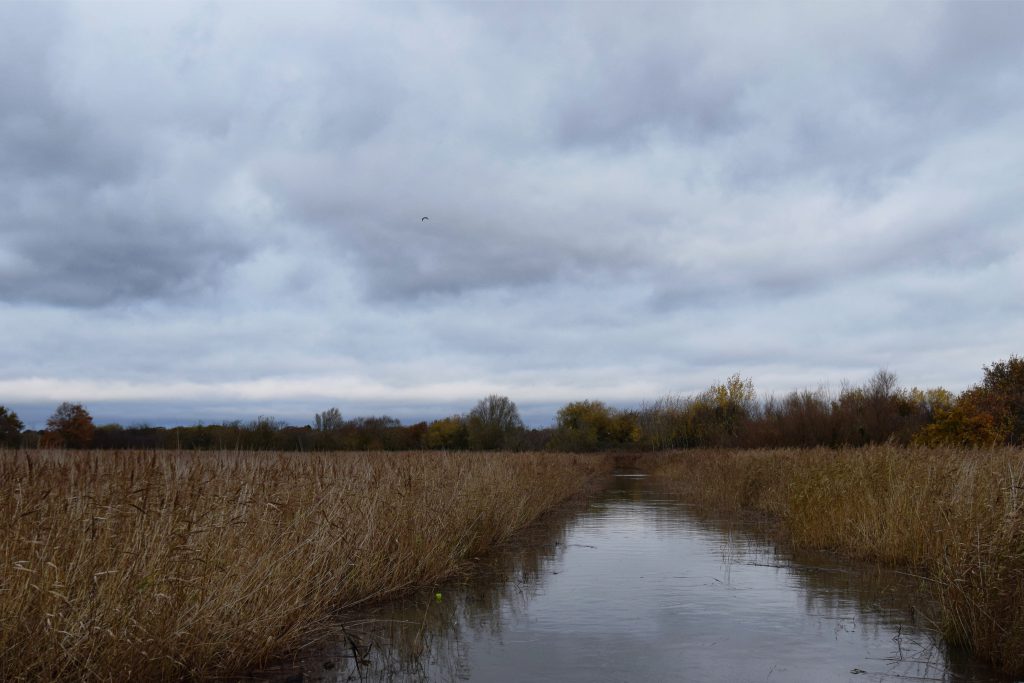 Commando has run the Gosport Half Marathon several times, in wind, rain, sun and even combinations of all three at once. The route along the coast can be problematic, especially when it’s windy and with storm Angus Sweeping across the country bringing a night of torrential rain and high wind, there was some doubt it would even go ahead today. In fact, a message on Facebook told us the organisers would make a final decision at 8:30. Of course, we had to leave home before then, not really knowing if we would have a fruitless drive or a race ahead of us.

We still didn’t know when we arrived at Bay House School to pick up Commando’s race number. What we did know though, was that it was freezing cold and windy but, thankfully, not actually raining. Slowly the runners began to gather in the school hall, with varying degrees of enthusiasm about the race ahead.

It turned out the race was going ahead after all so it was time to go back outside and brave the weather. Being on the move towards the start line kept us warm, at least for me in my coat. There was a huddle in the start pen, people desperate to share body heat.

Then they were off. In normal circumstances I’d have had about and hour and three quarters before Commando crossed the line, give or take a few minutes. Because he is coming back from injury though, he’d decided not to push things and had put the word out that he’d be aiming to finish in two hours ten minutes and would be happy to act as pacer for anyone who wanted to get a PB at around that time. His Facebook message generated far more interest than he’d expected, especially from the female runners. As they disappeared down the road, he had an entourage of women chasing after him. Its a good job I’m not the jealous kind!

Once the runners had all disappeared I found myself with a couple of hours to kill. Last year I found some interesting trails and a Costa. Given all the rain over night, I didn’t think the trails would be a good plan so I headed to Costa. At least I would be warm for a little while. Even so, I couldn’t help looking longingly along the River Alver as I headed along Privett Road, thinking about the walk I could have had if the weather had played nicely.

After a coffee and a nice sit down in the warm, it was time to head back towards the finish line. The course is a kind of cruel double loop  heading down along the shore, back towards the finish and then down along the shore again. For spectators this means two chances to spot their runner. For runners it means a tantalising glimpse of the finish near the half way point before turning and doing it all again. On a cold windy day this is probably not very welcome.

When I got to the corner Commando and his troupe of ladies were making the turn. I shouted and waved but was a bit slow with the camera so only caught them from behind. They looked to be on track for their two hour ten finish though and seemed quite chirpy in the circumstances. 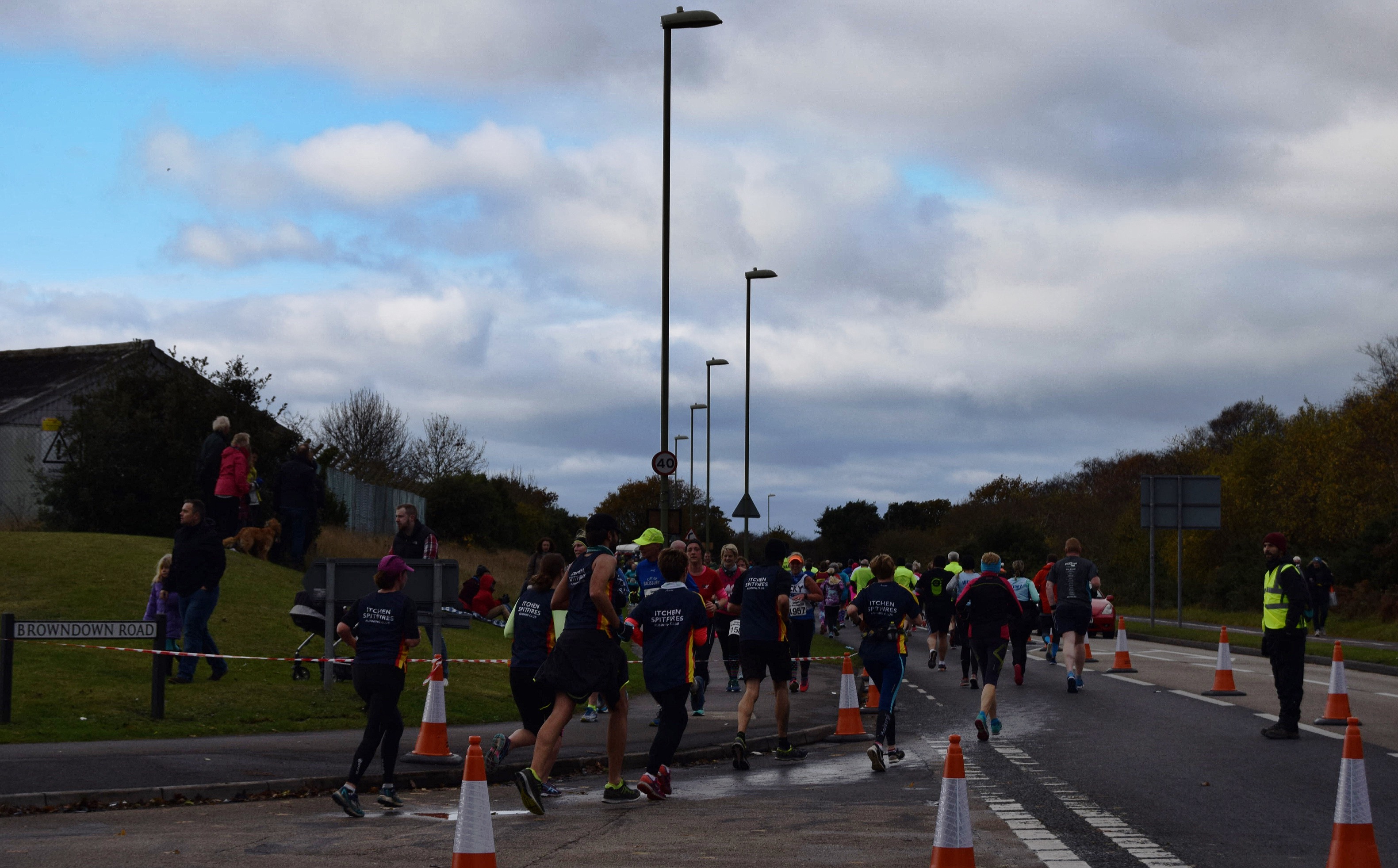 This corner is actually a good place to stand, giving a view in both directions, plus it’s not usually as crowded as the actual finish line. With this in mind I decided to stay put. The jumping up and down and cheering did at least keep me warm.

Around two hours after the start a familiar figure appeared. Commando was bang on target for the finish time he’d planned and he still had two of his ladies with him. Some had dropped back, some had even gone ahead but these two had stuck with him, both were on target to smash their PB’s by several minutes. 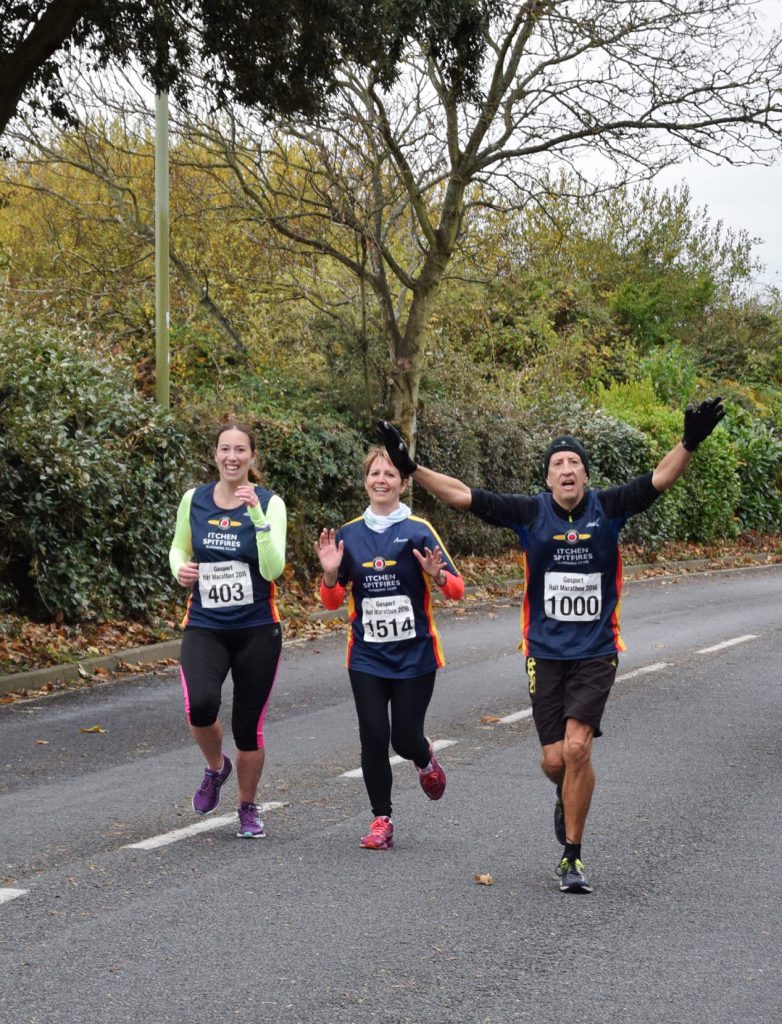 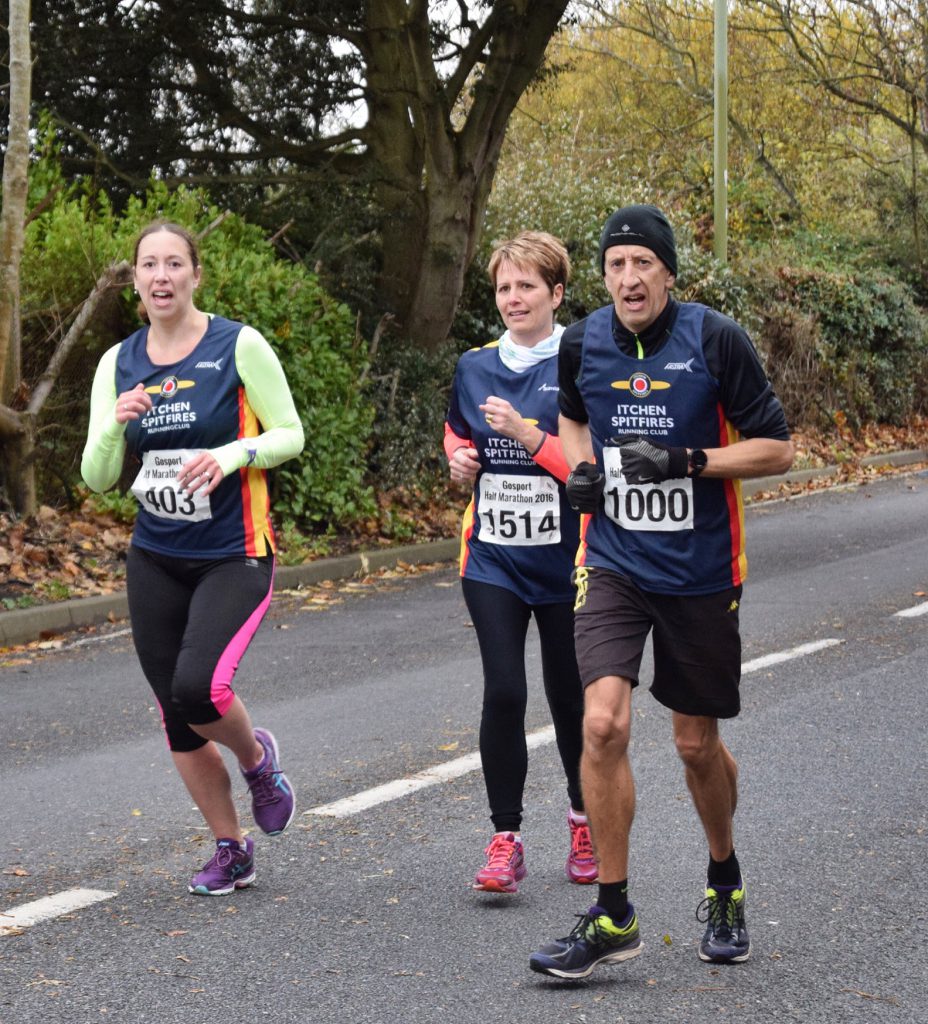 The crowd went wild, well I jumped up and down a lot and shouted really loudly. Commando urged his followers on for a last push across the line and I made a dash through the crowds to try to meet him there. 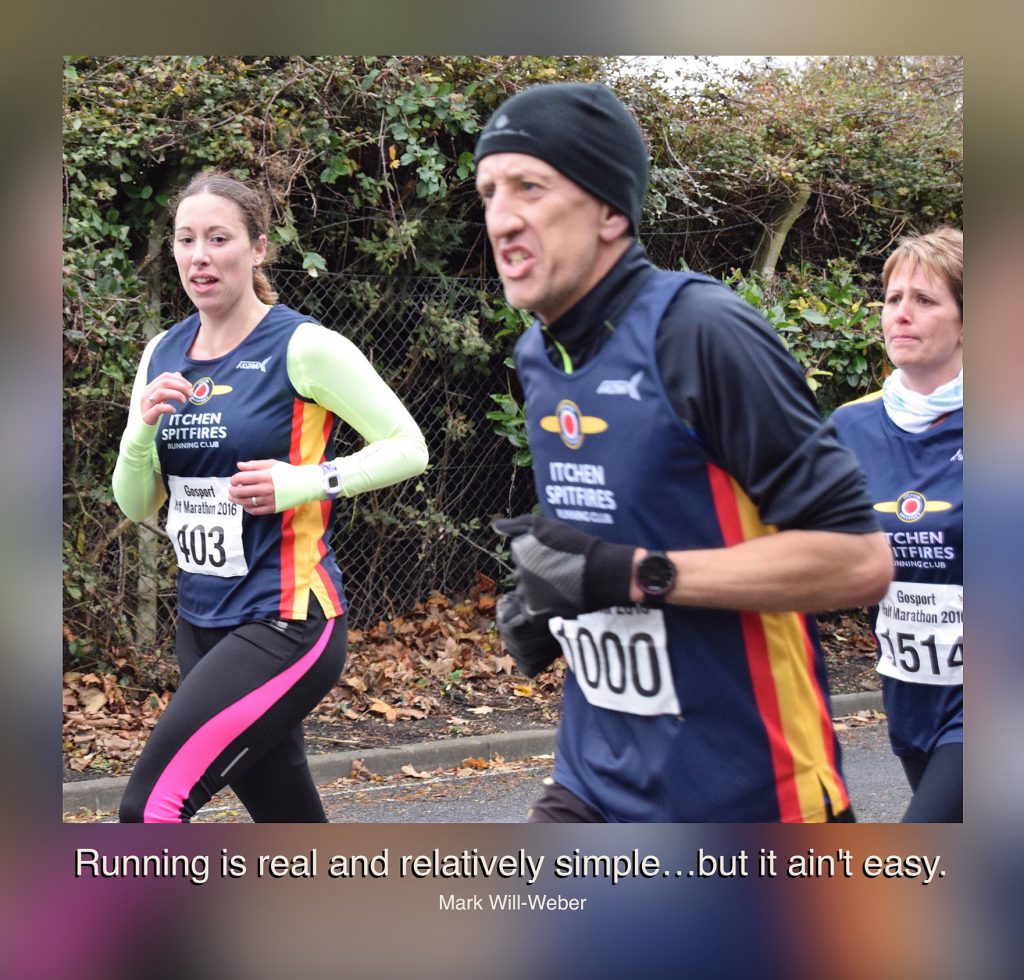 We found them, all smiles, spotting their hard earned medals. 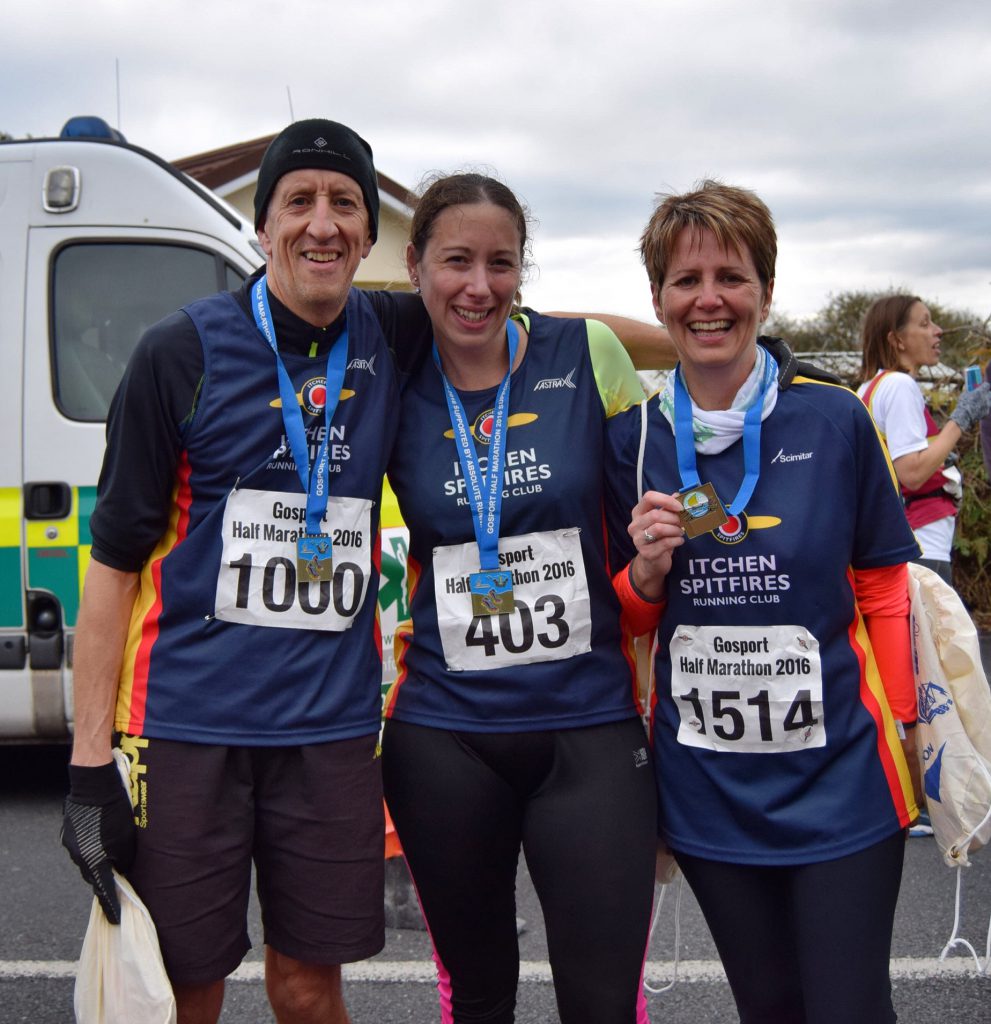 In normal circumstances Commando and I would have stayed around to watch every last person cross the line. Today though we had a plane to catch so we had to say our goodbyes and head off home to get warm before we set off for the sun.