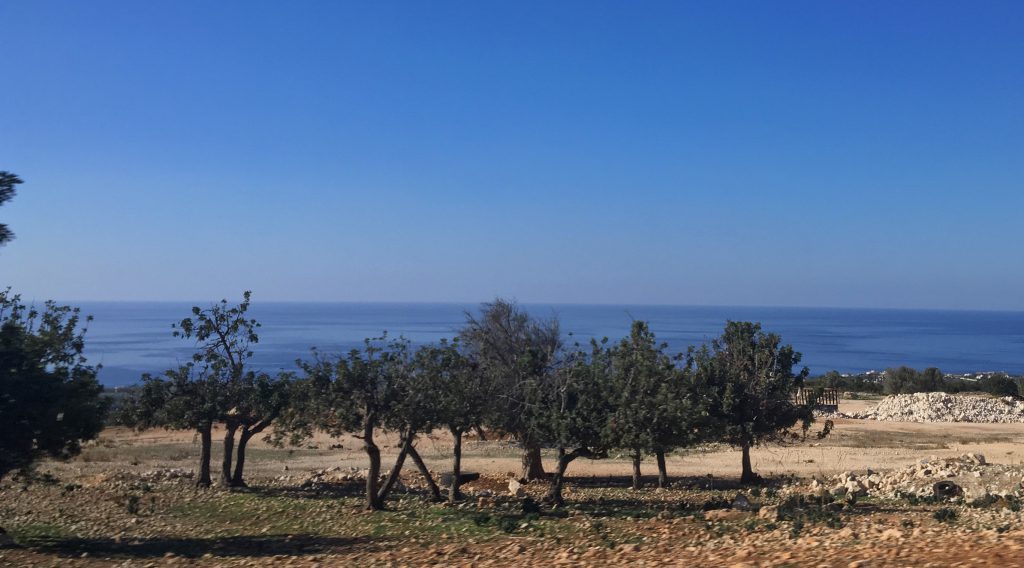 Today we had an even earlier start. A coach picked us up from the hotel at 7:45, still struggling to digest our hasty breakfast. Sue seemed none the worse for her tumble yesterday and was as chirpy and giggly as ever. We were headed for the mountains again, this time for the Akamas Multiterrain Half Marathon. The journey was long but the views from the coach window kept boredom at bay. White painted cuboid houses with terracotta tiled roofs and shady balconies gave way to craggy rock formations dotted with stunted trees, contorted and bowed down by the weight of the relentlessly beating sun. Every inch of flat space was covered with bananas, pomegranates, oranges, cabbages or fruit bushes in rows. What I wouldn’t have given to walk the interesting looking trails we passed. 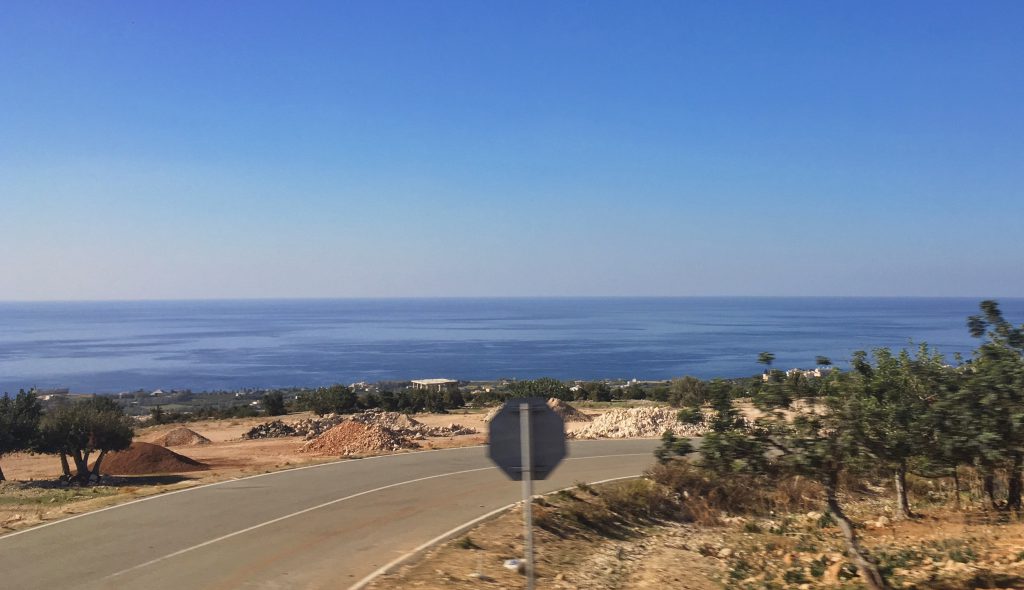 Oddly, for all the agriculture, there seems to be little care for the fruit itself, oranges lay discarded and rotting on the ground, pomegranates dried out, splitting orbs, the ruby red seeds shrivelled. Aside from the houses and their pretty gardens there is little thought for appearances. Old shipping containers rusting away serve as sheds, tumble down snacks of grey wood, crumbling and broken. Buildings, half finished, have been abandoned,  along with the odd car or tractor slowly decomposing into rust. 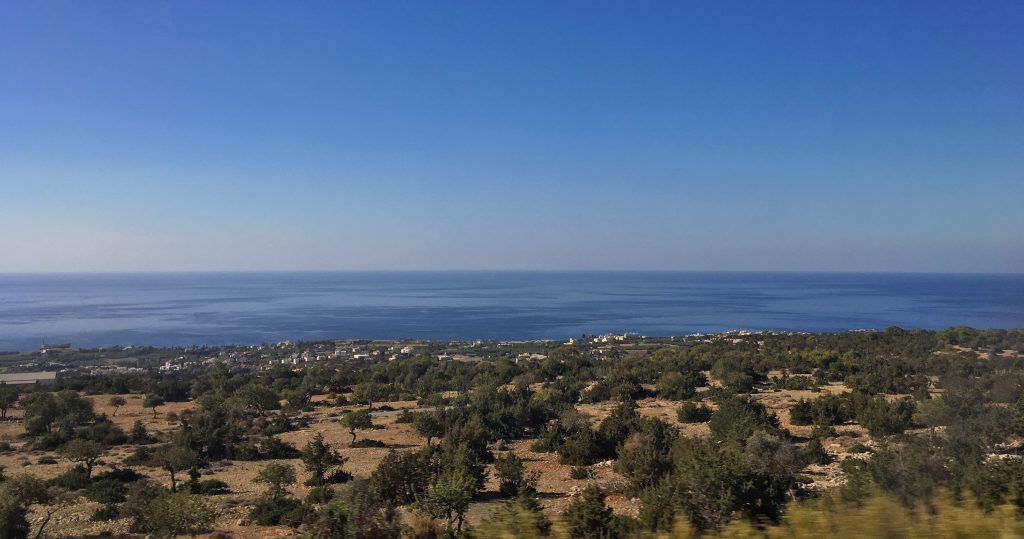 The last part of the journey to Neo Chorio was through narrow winding streets of stone houses. The coach was too large to get right into the village so we had a short walk to the pretty church of Saint Minas where the race would start. The village name means new village although a sign we passed proclaimed it to be three hundred years old. Perhaps three centuries is considered new in Cyprus? It certainly seemed larger and more modern than Pano Arodes from the little I could see between the crowds of runners who’d descended on it. 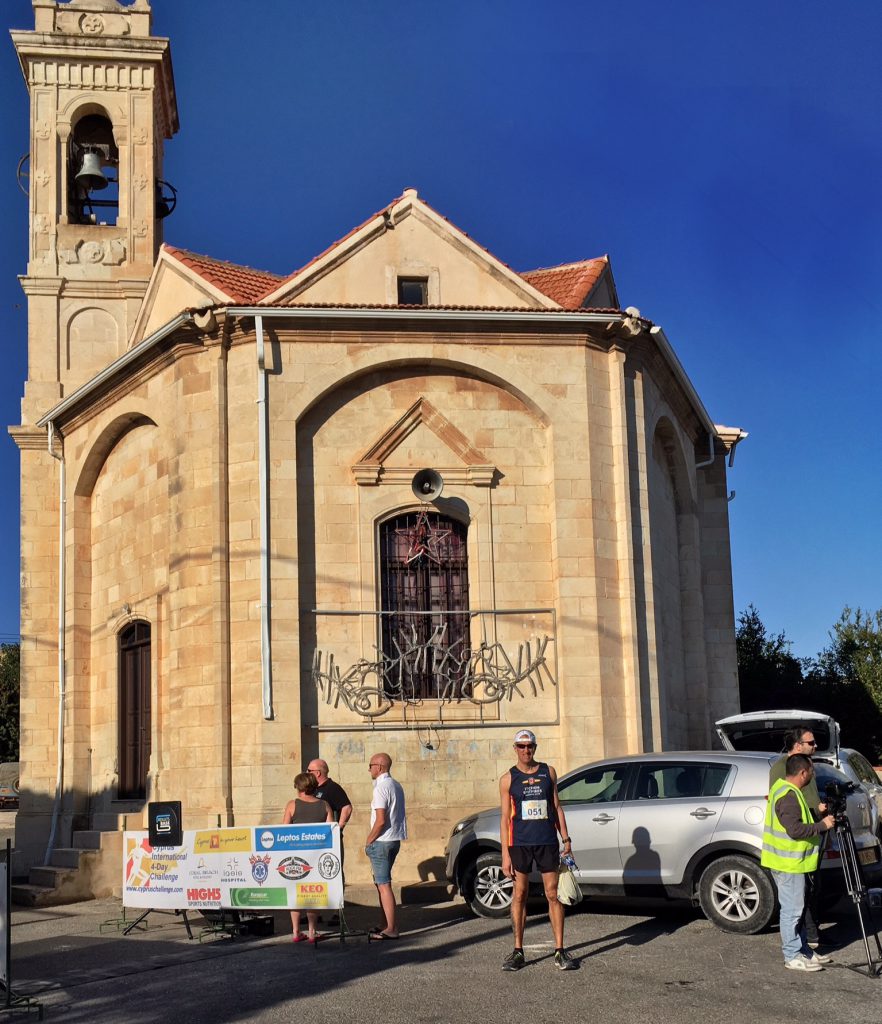 Neo Chorio nestles on the edge of the wilderness of the Akamas peninsular and is known as The Gateway to the Akamas. It began life as a small community of shepherds, farmers and fishermen but has grown rapidly in recent times and now caters for tourists with villas, hotels and apartments. Between the buildings there were wonderful views of the mountainous landscape.  Sadly, once the race started, we’d be leaving so there was precious little chance to explore. To make the most of the time I did have, I wandered around taking photos of the church while Commando joined the queue for the portaloos. 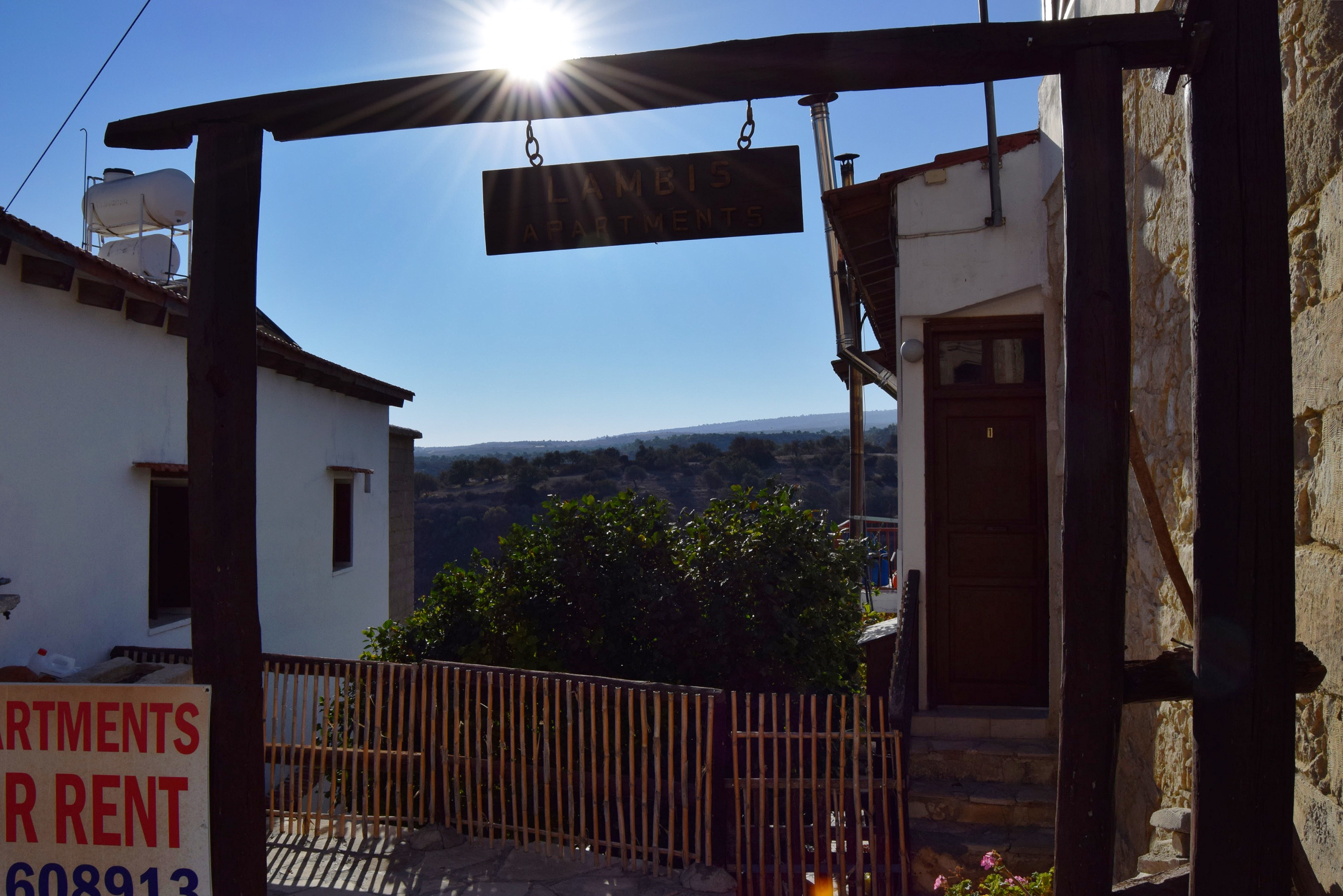 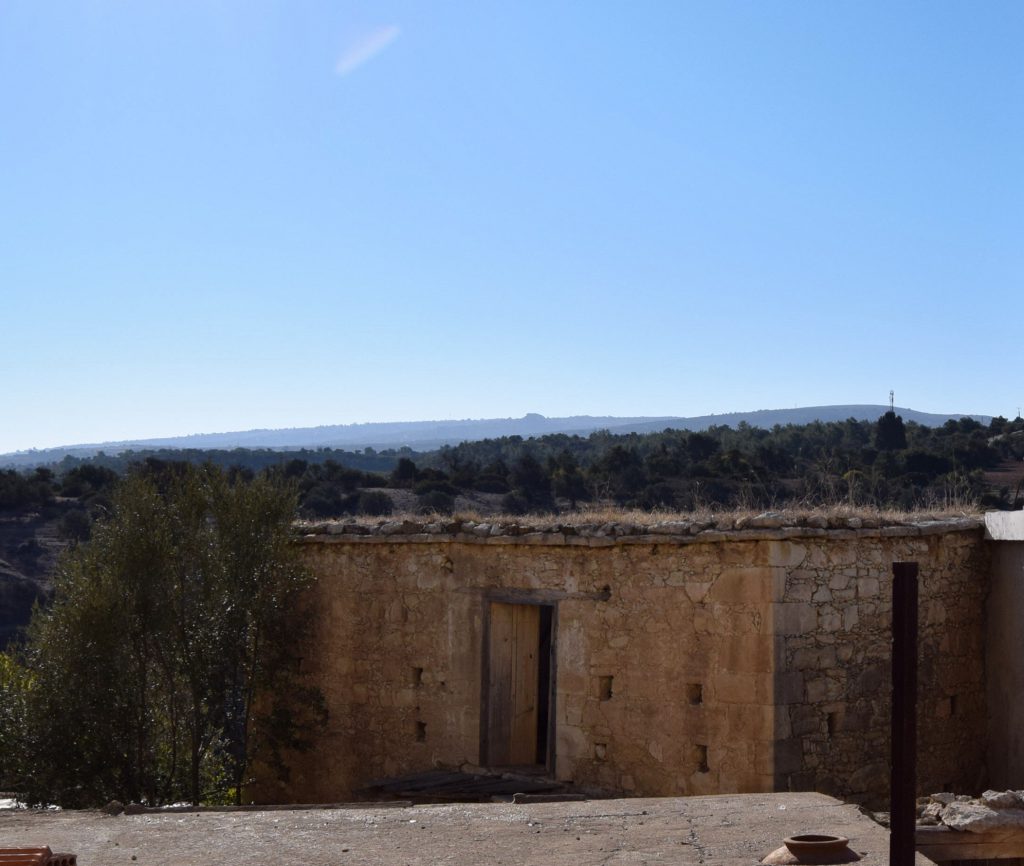 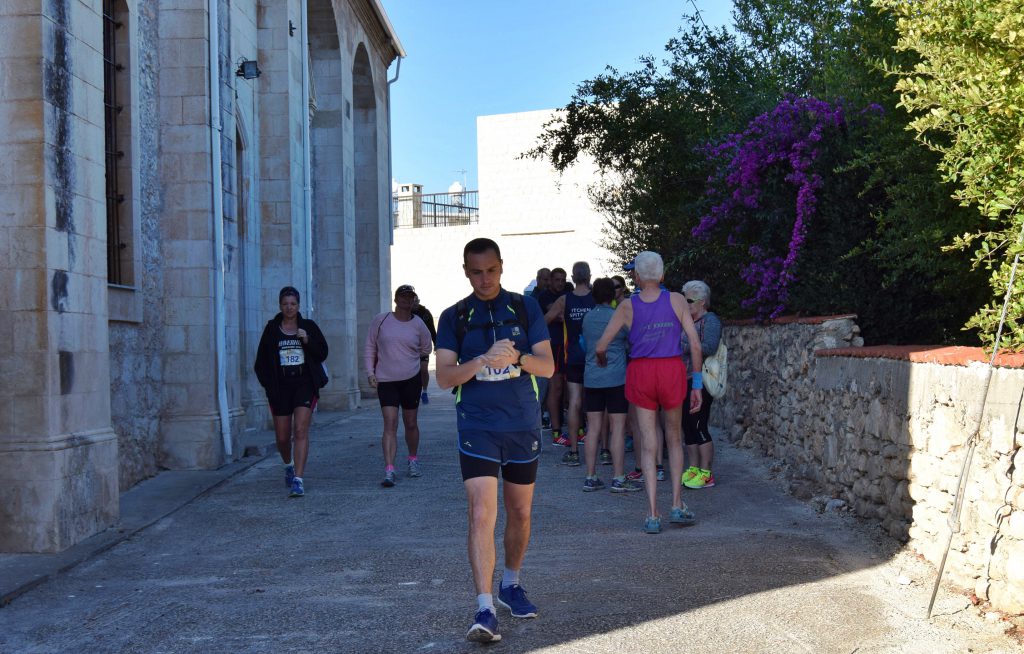 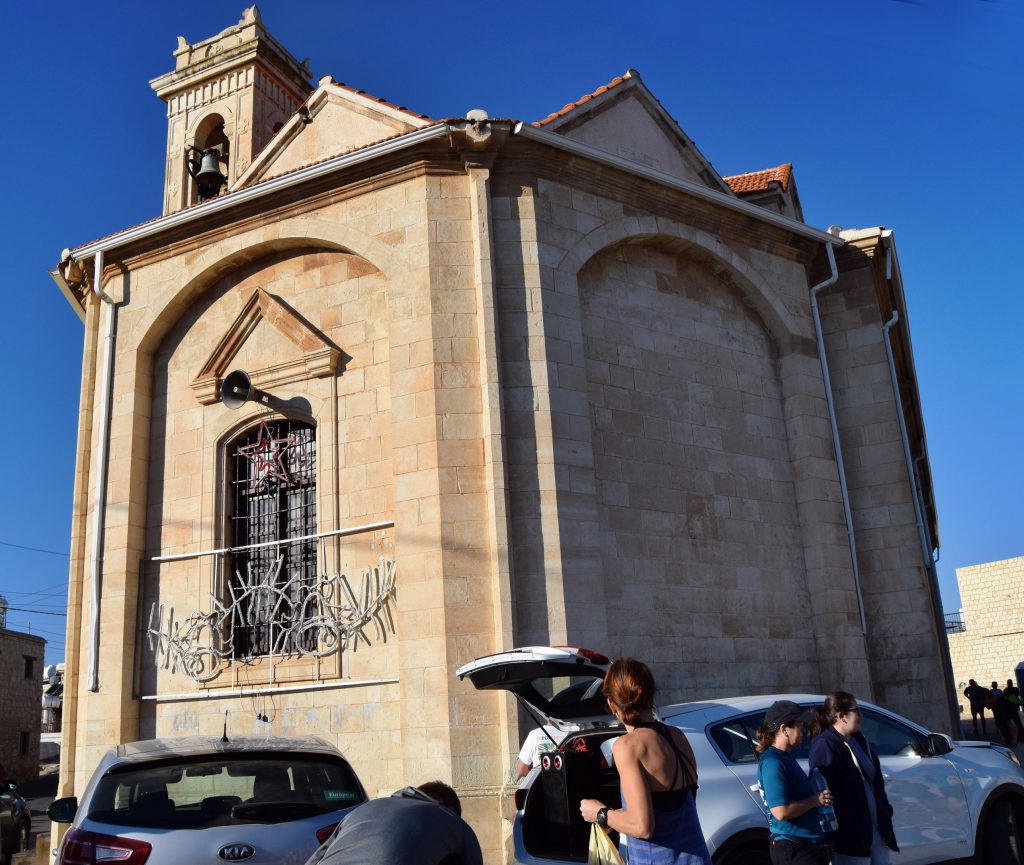 According to Google, the stone church was completed in 1912, although it looked far older to me. I suspect some of the stone may have been reclaimed from elsewhere, especially the rough stone infilling the arches at the front.  Through the windows I could see brightly coloured paintings, like the church at the finish line yesterday. If only it had been open I’d have gone for a look inside. 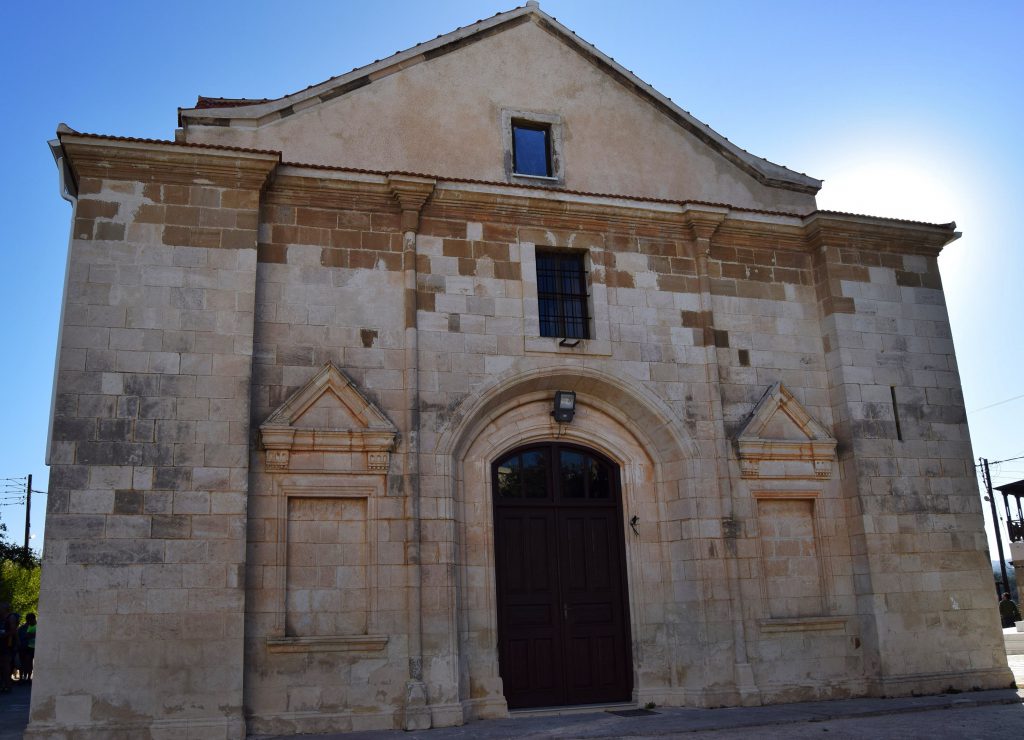 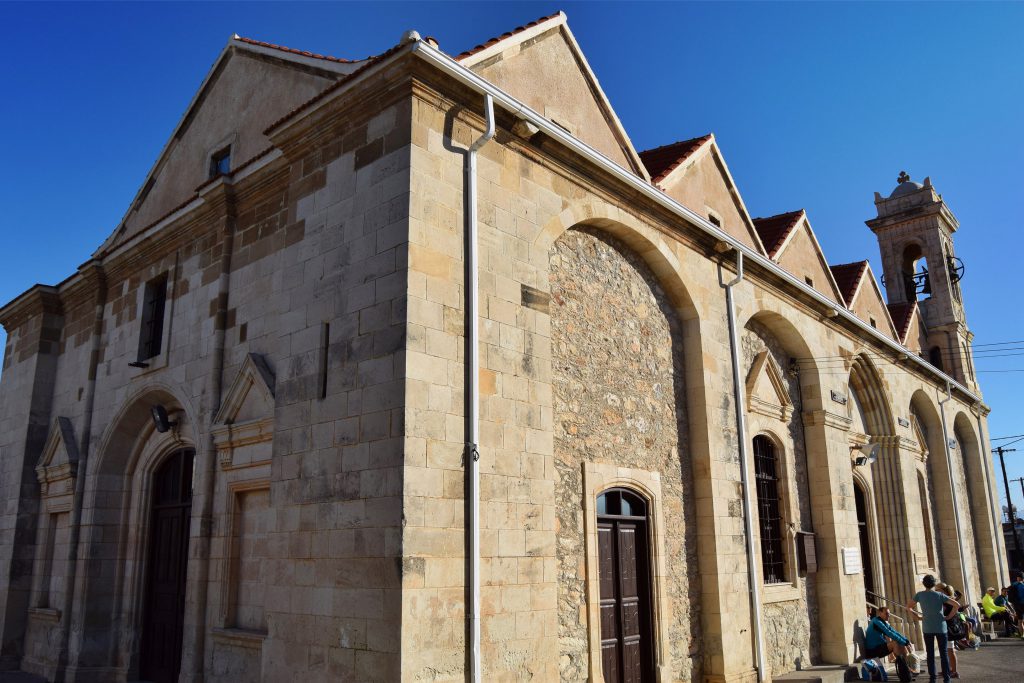 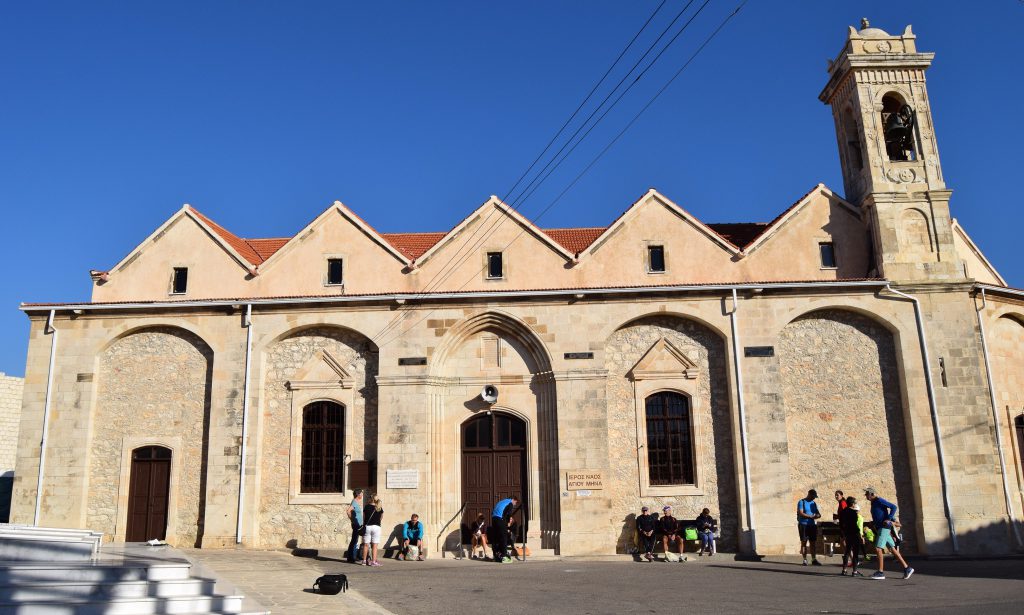 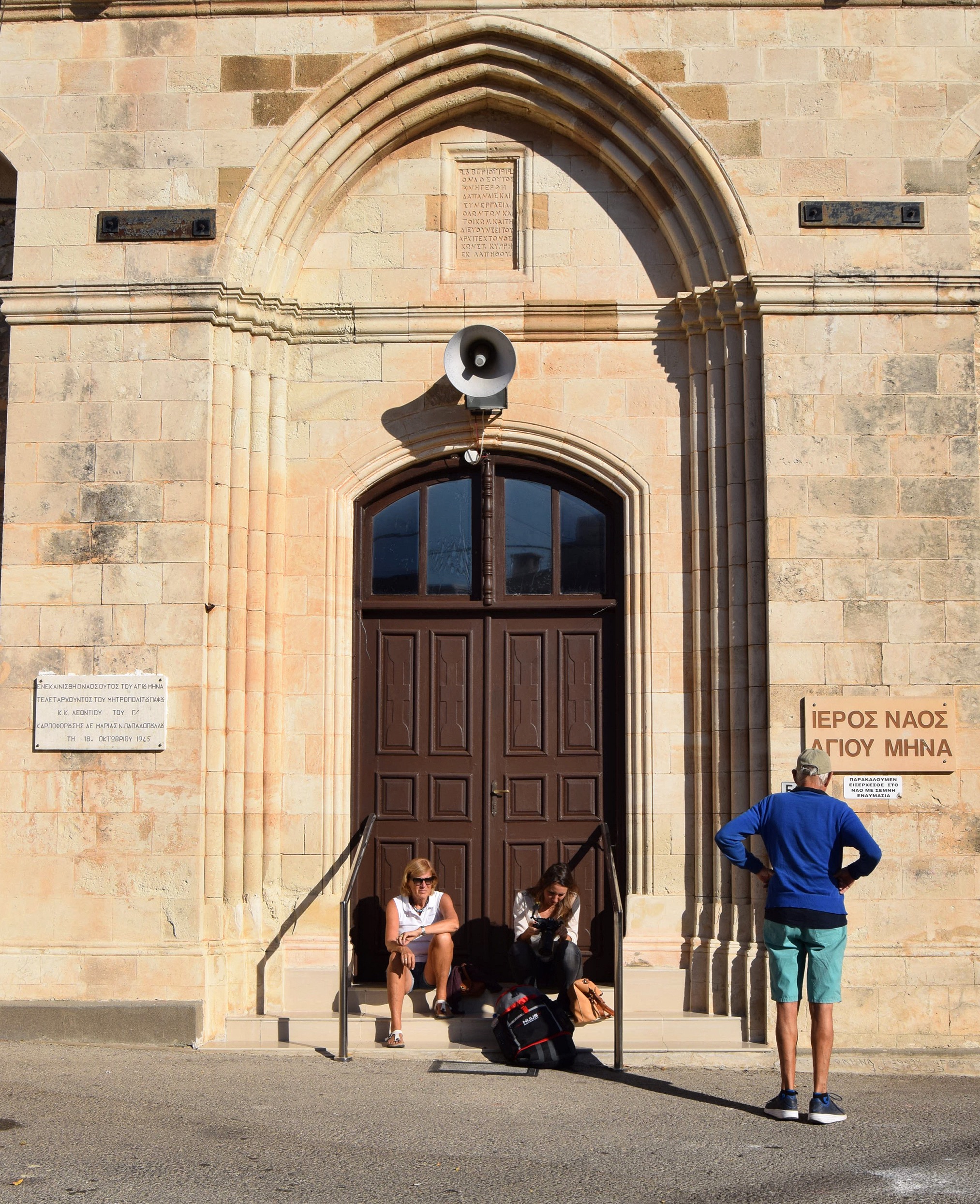 Behind the church I found another line of bronze busts standing on marble plinths, a memorial to the men of the village lost during the EOKA battle for union with Greece. I couldn’t help wondering if every village had similar monuments and what it might have been like to live here in such troubled times? 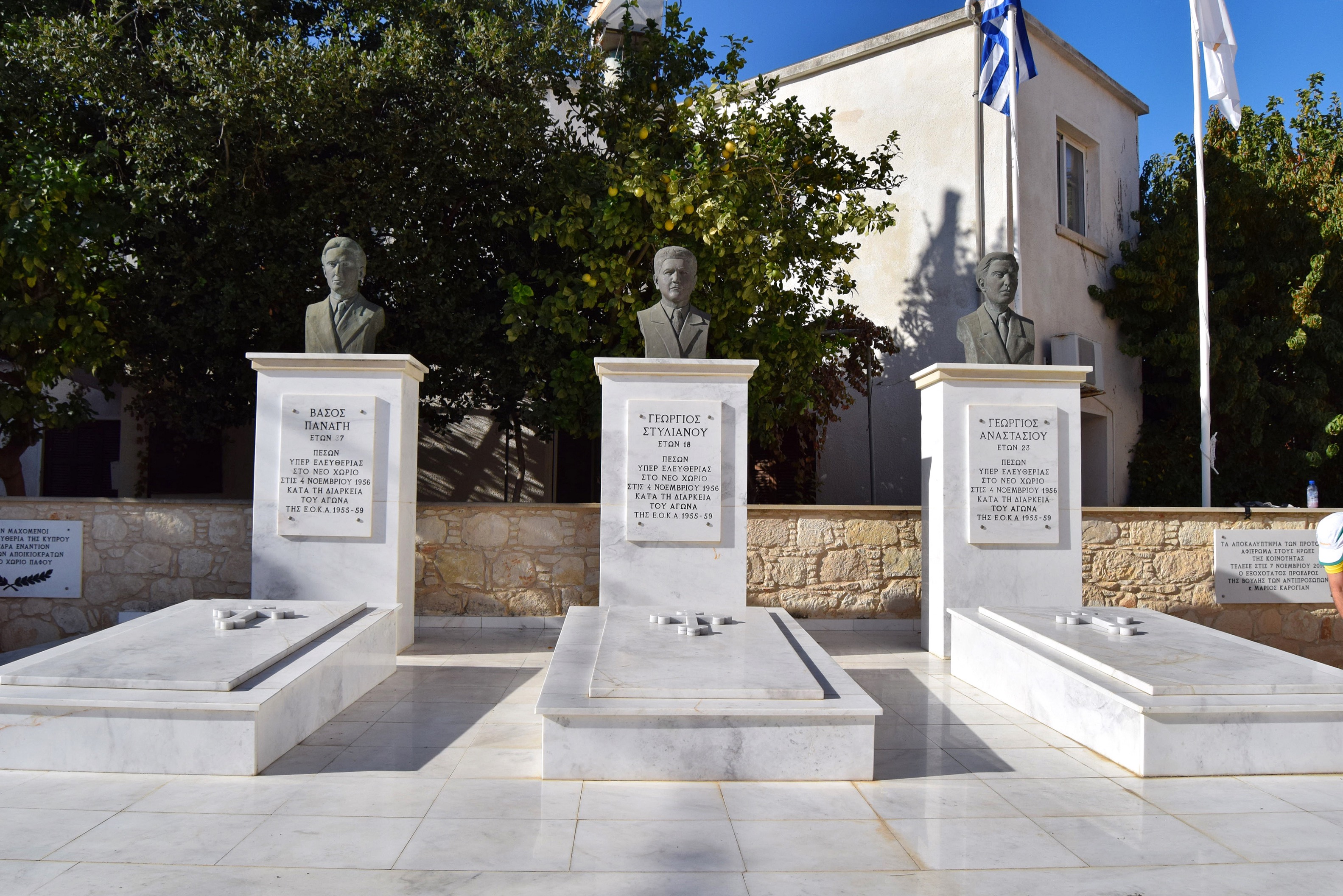 Although it was barely nine o’clock in the morning it was already beginning to get hot. The Christmas lights on the end of the church and the nativity scene beside it under a small, straw covered arch seemed out of place with warm sun and blue skies overhead. While I was looking at it Commando, came back and I took his photo standing in front of it. 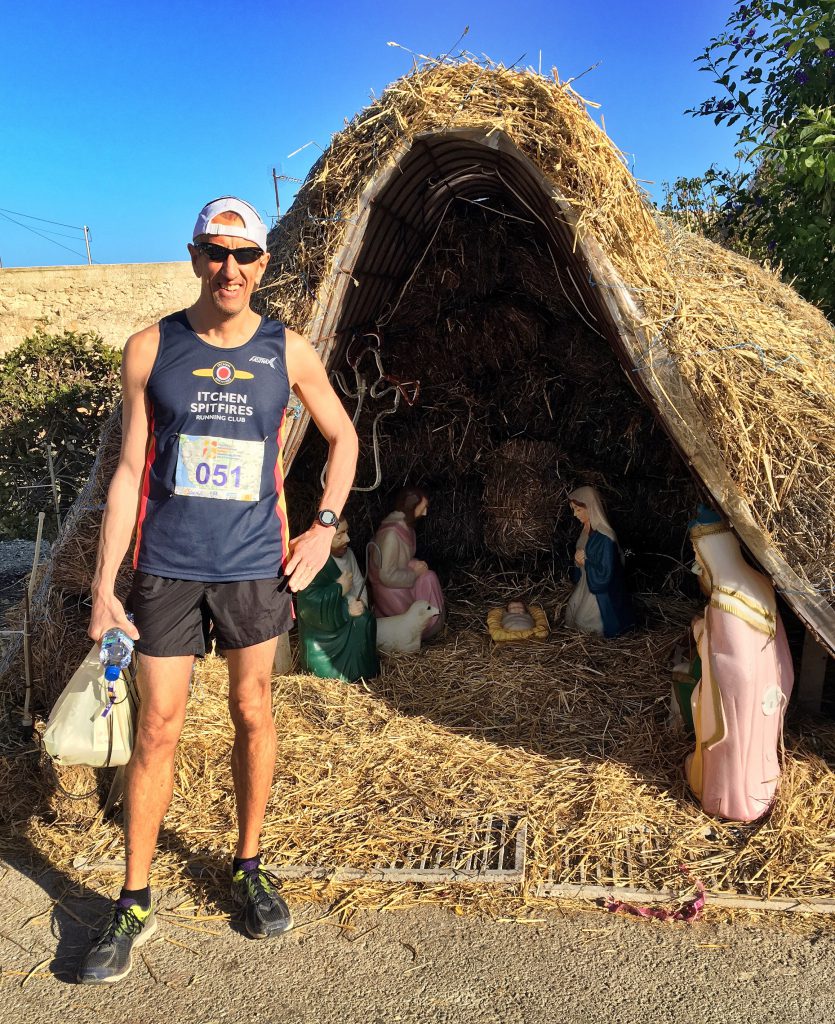 Beside the nativity scene was a stone arch containing a tap. This, I later discovered, is the village tap, built in 1926 and supplied by the local Kefalovriso, or village spring. The whole village square was a hive of activity with runners everywhere I looked. In the centre of everything Mike and Yolanda were overseeing proceedings, preparing to gather the first wave of runners. 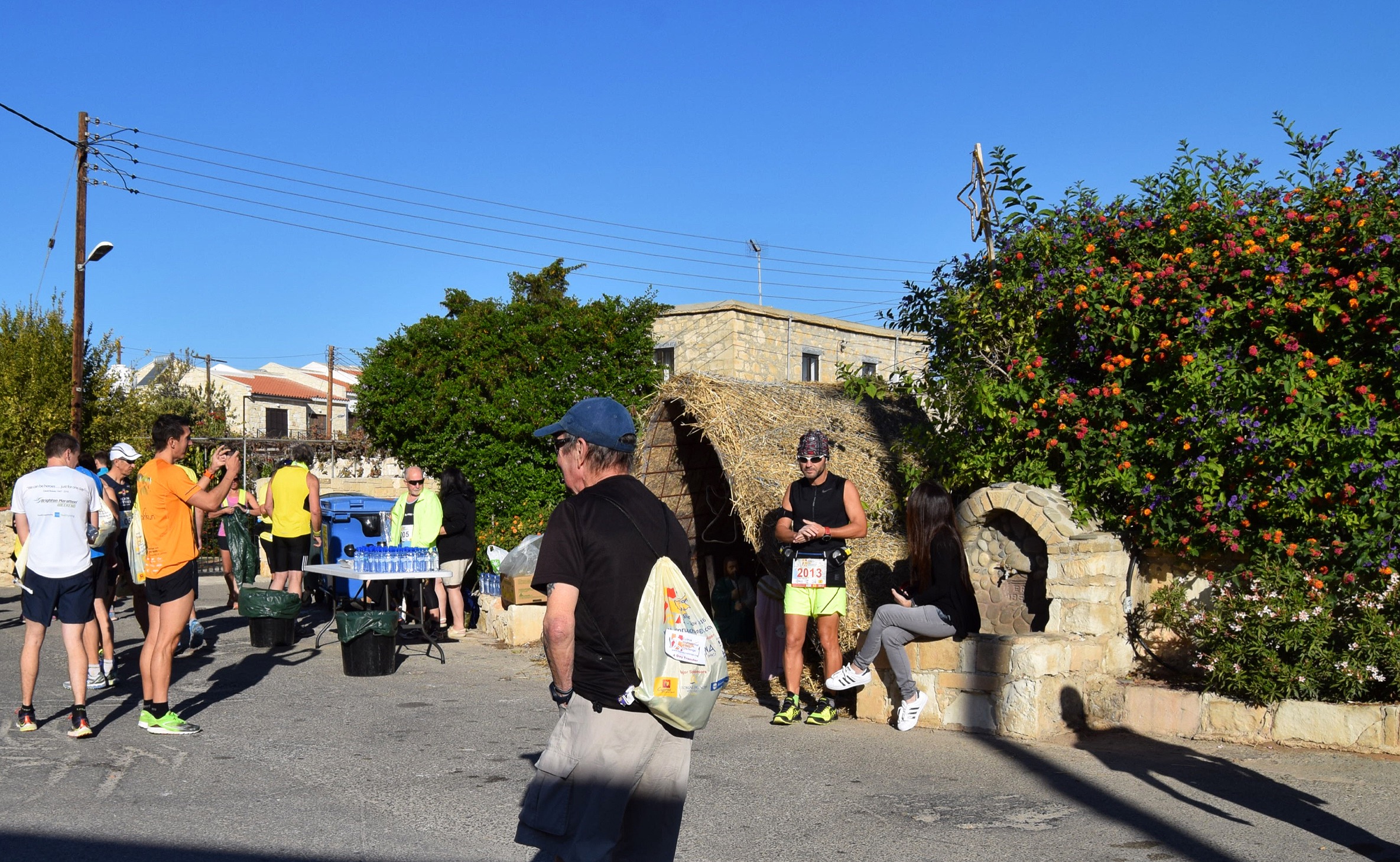 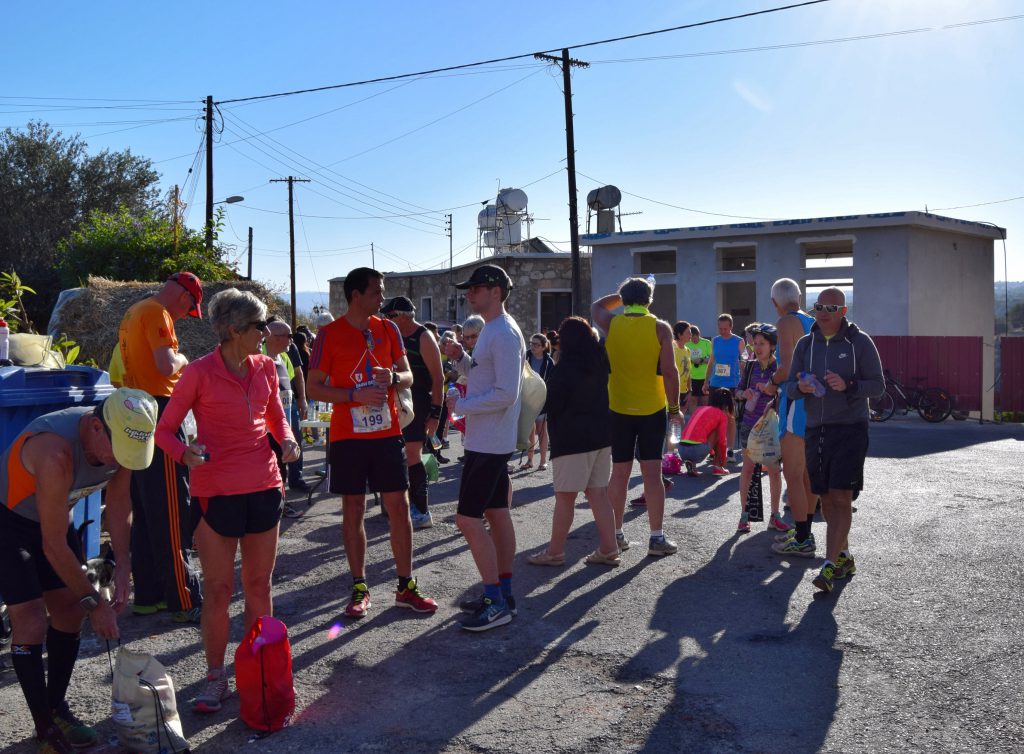 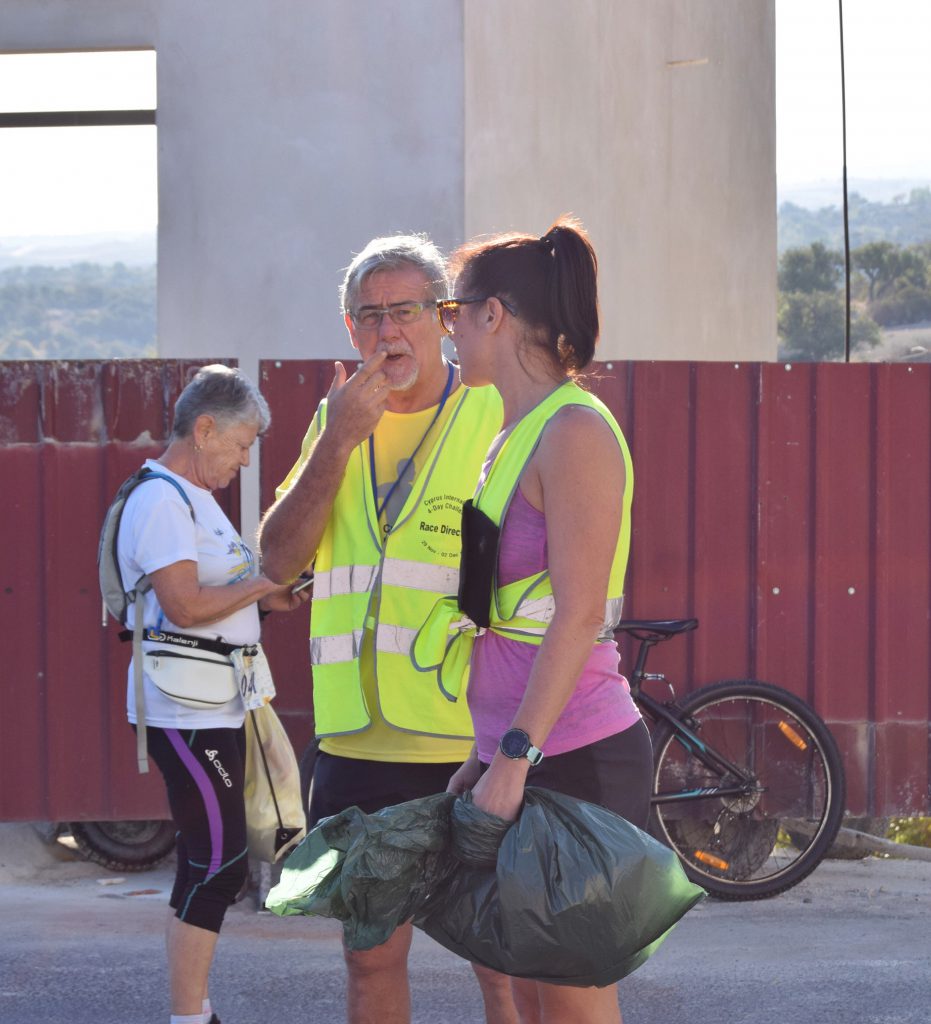 Eddie had just come up to speak to me when Yolanda called for the first runners to gather. Like yesterday, the slower runners would start early so this was Eddie’s cue to get to the start line. Moments later the small group set off along the central road cutting through village towards Akamas. The trail they would follow was once a trade route used by camel traders who carried gypsum for shipment overseas. As I watched the runners climbing the hill I wondered what Commando’s poor legs would make of it. According to the briefing and the maps, the first 5k would be all up hill. This was never going to be a PB kind of race, especially as the last part would be running across a rocky, sandy beach. 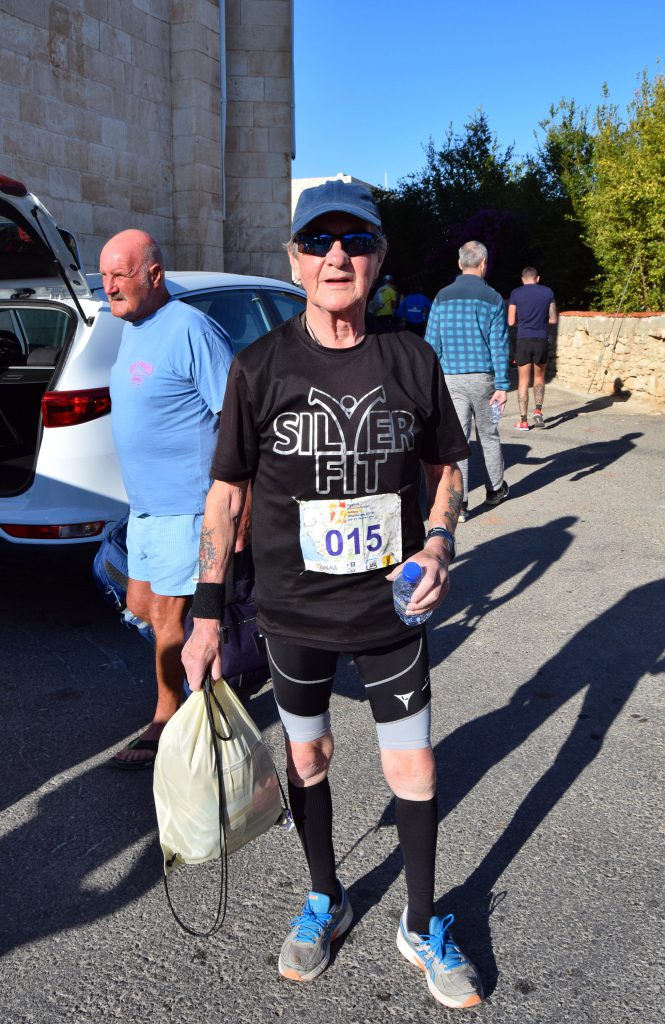 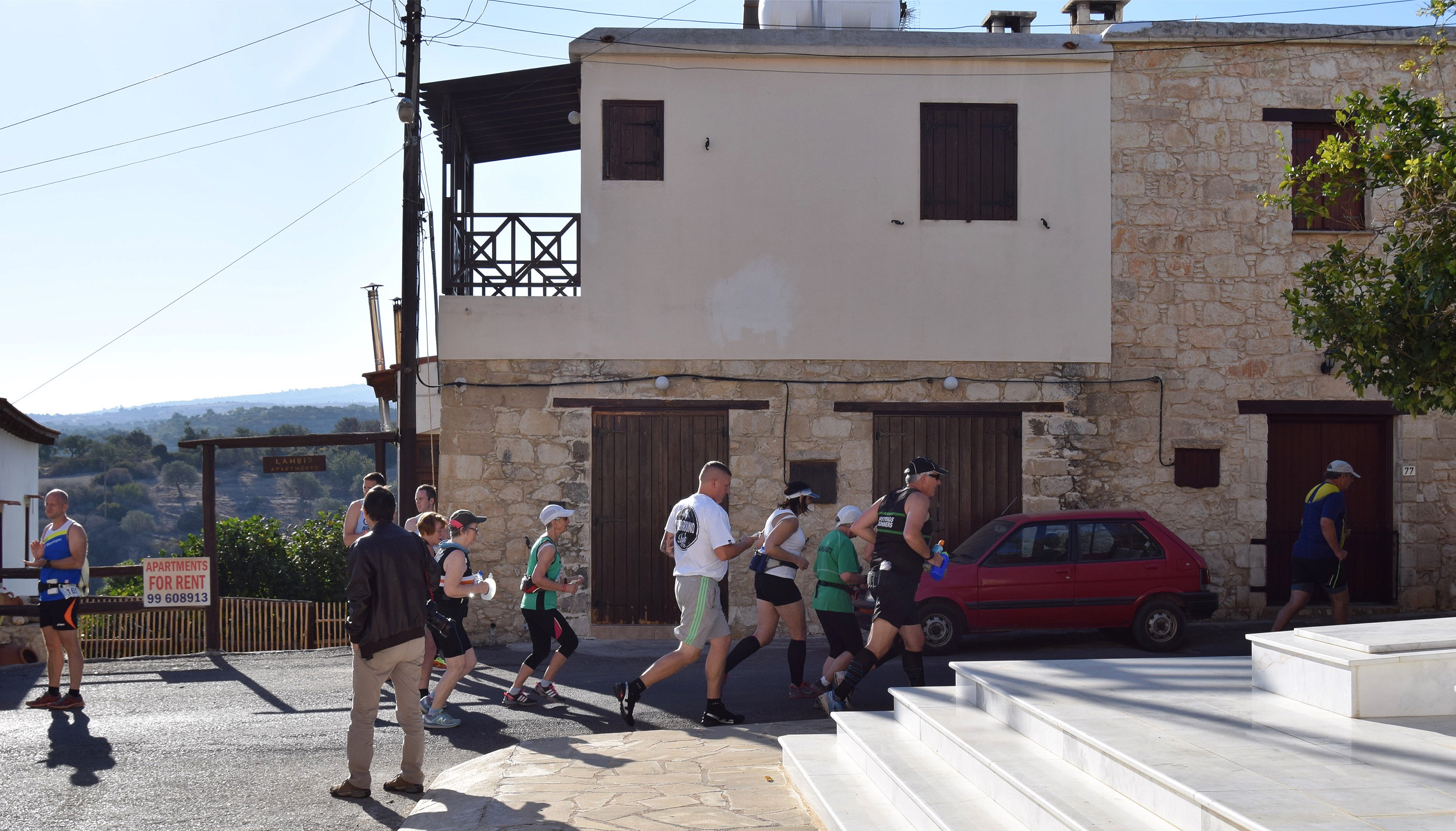 Once the first wave had disappeared a few of the RAF boys began taking warm up runs. A small dog, barely a puppy by the look of him, decided this looked like fun and chased one of them up the hill. Then everyone began to gather for the real start of the race. It was time for me to find a good vantage point. 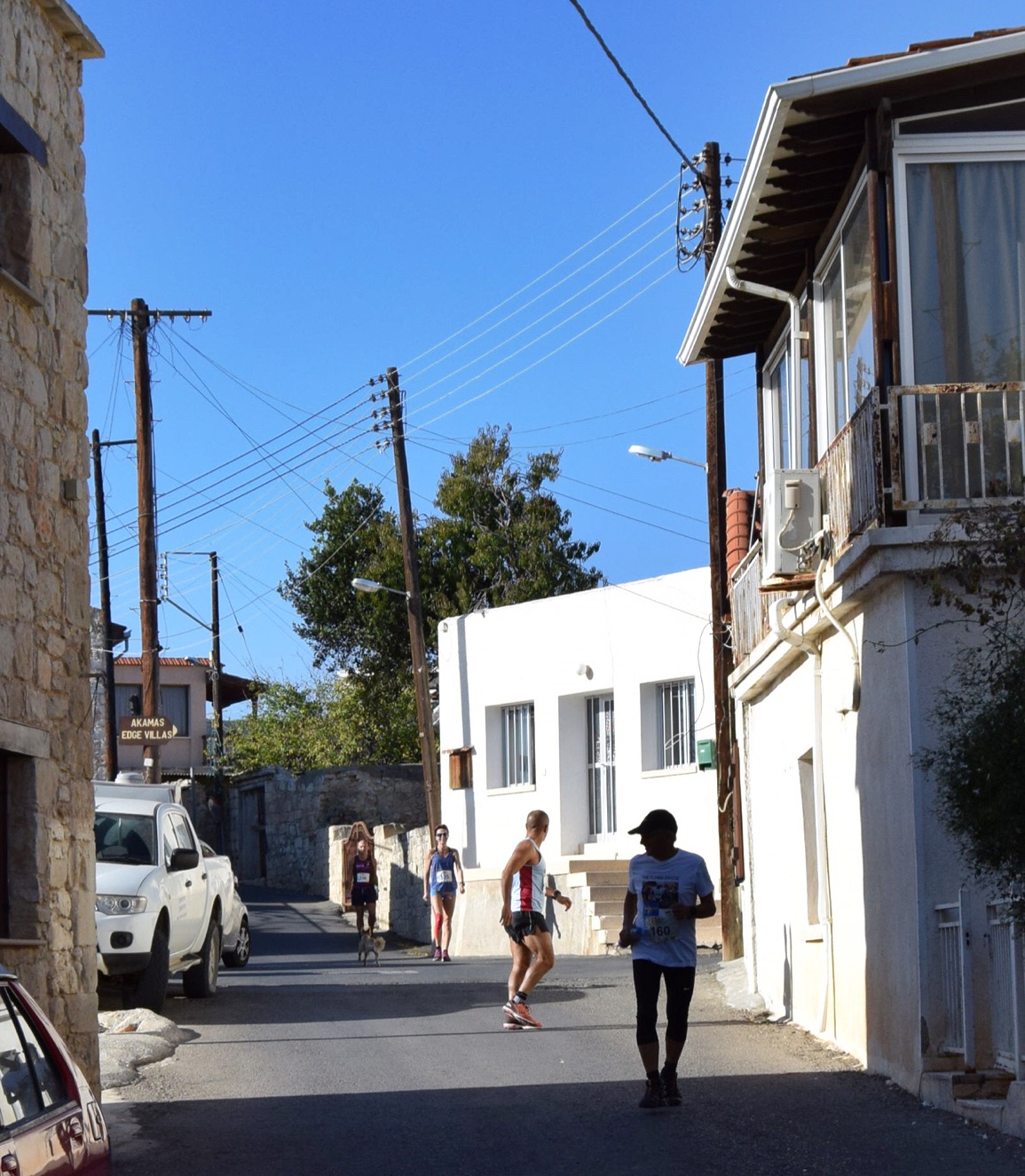 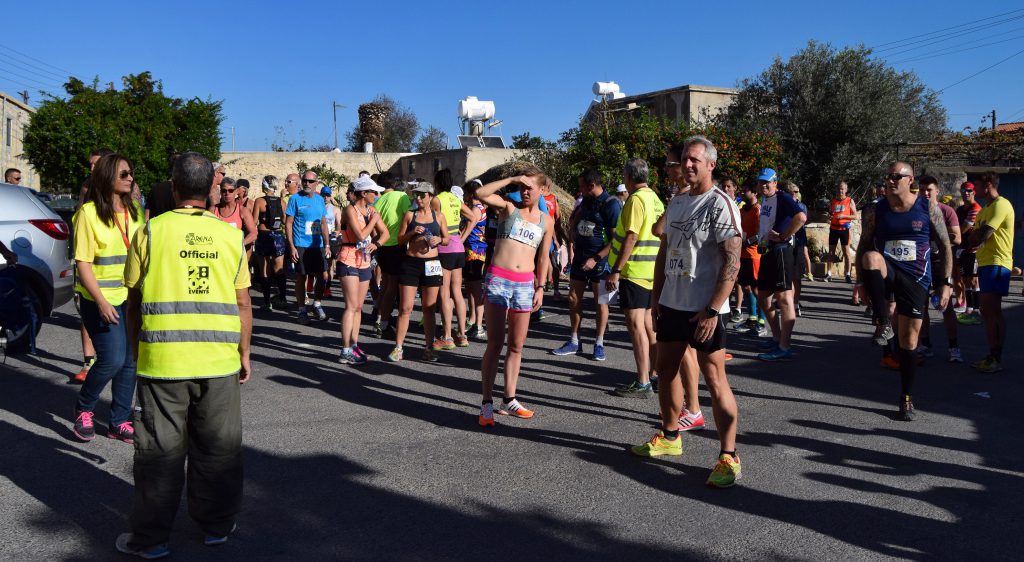 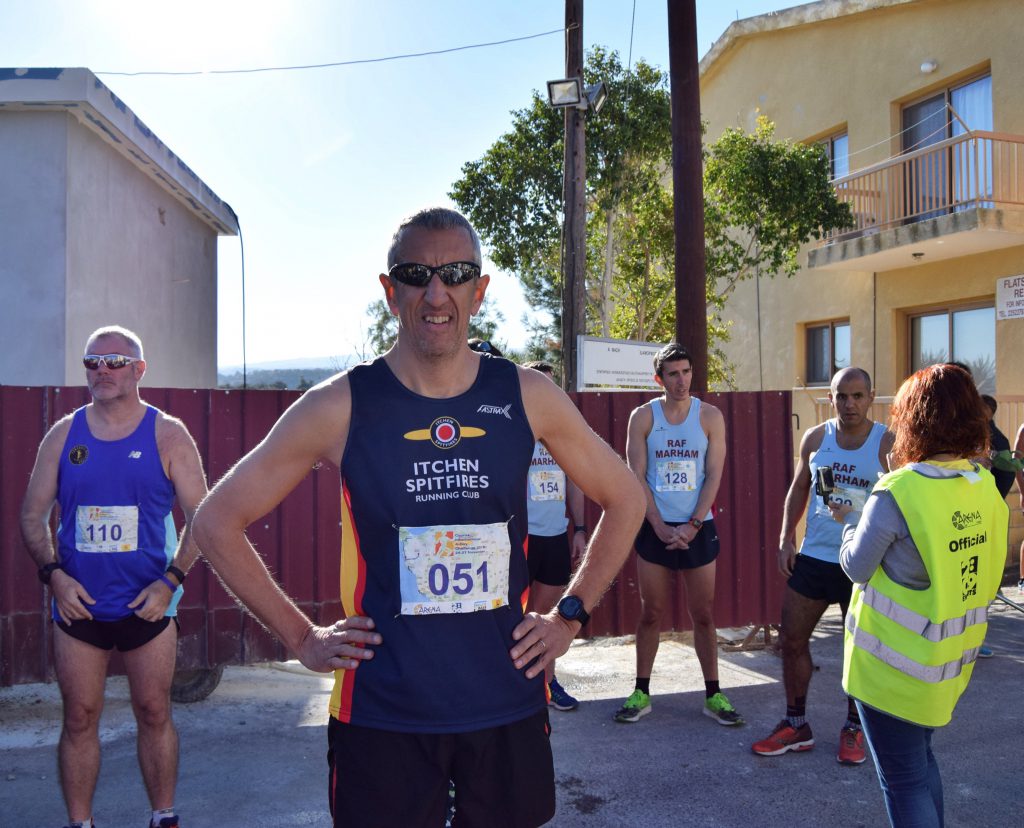 In the end I found a position a little way up the hill in a recess where two houses met. It wasn’t ideal but at least I might be able to spot Commando as he passed. Mike and Yolanda came past in the lead car and, shortly afterwards, the church bells began to ring to signal the start of the race. 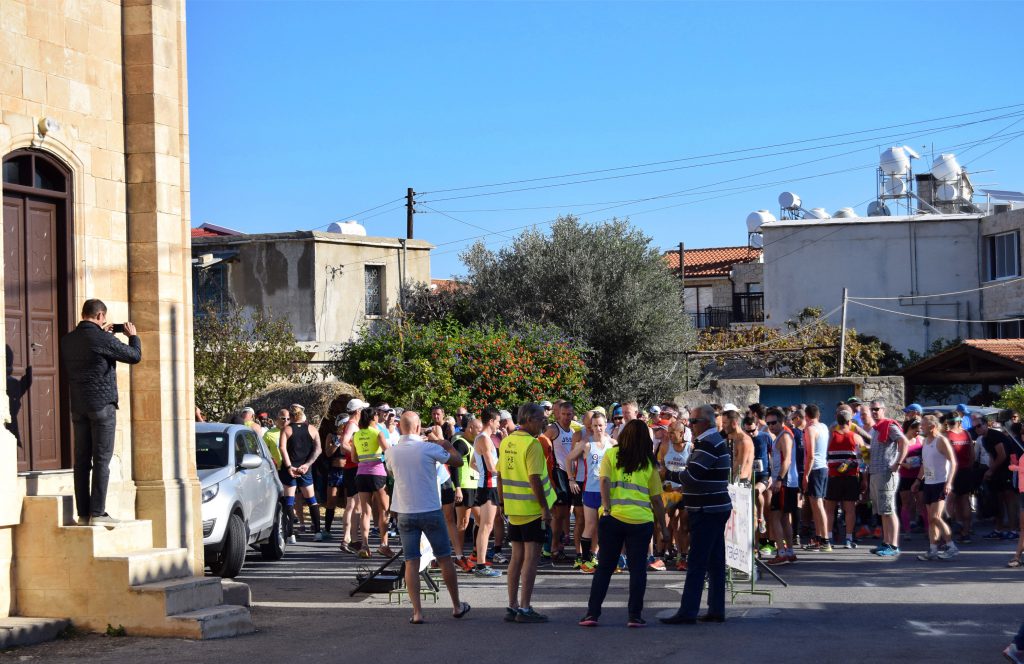 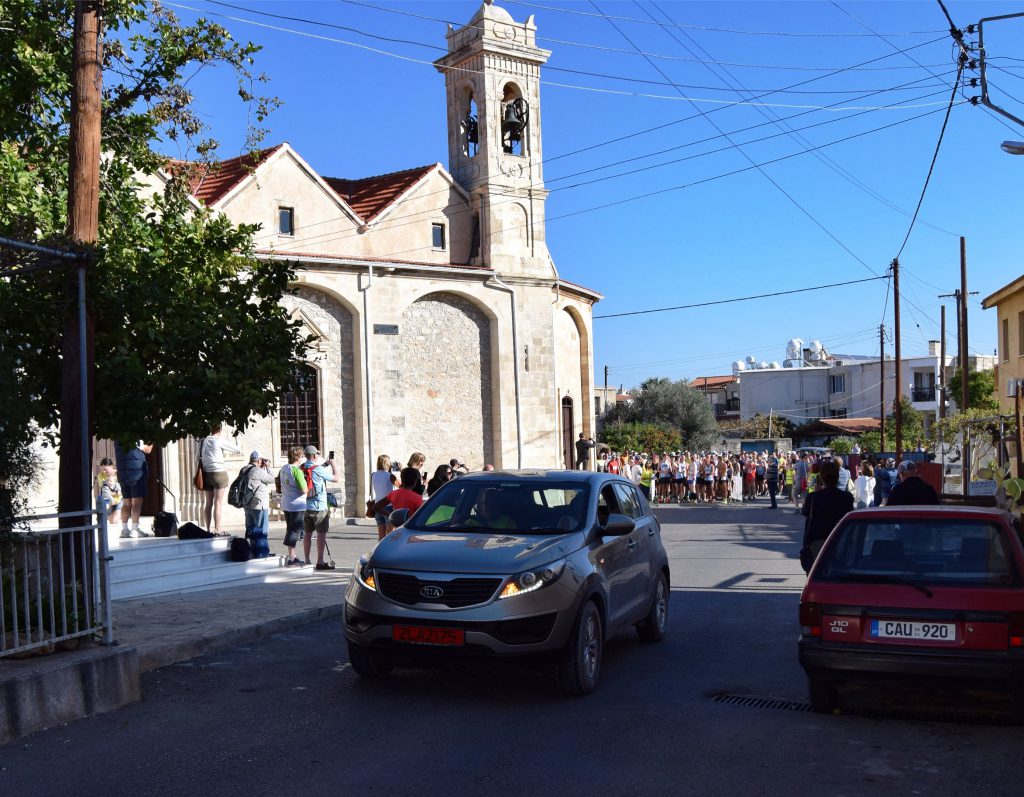 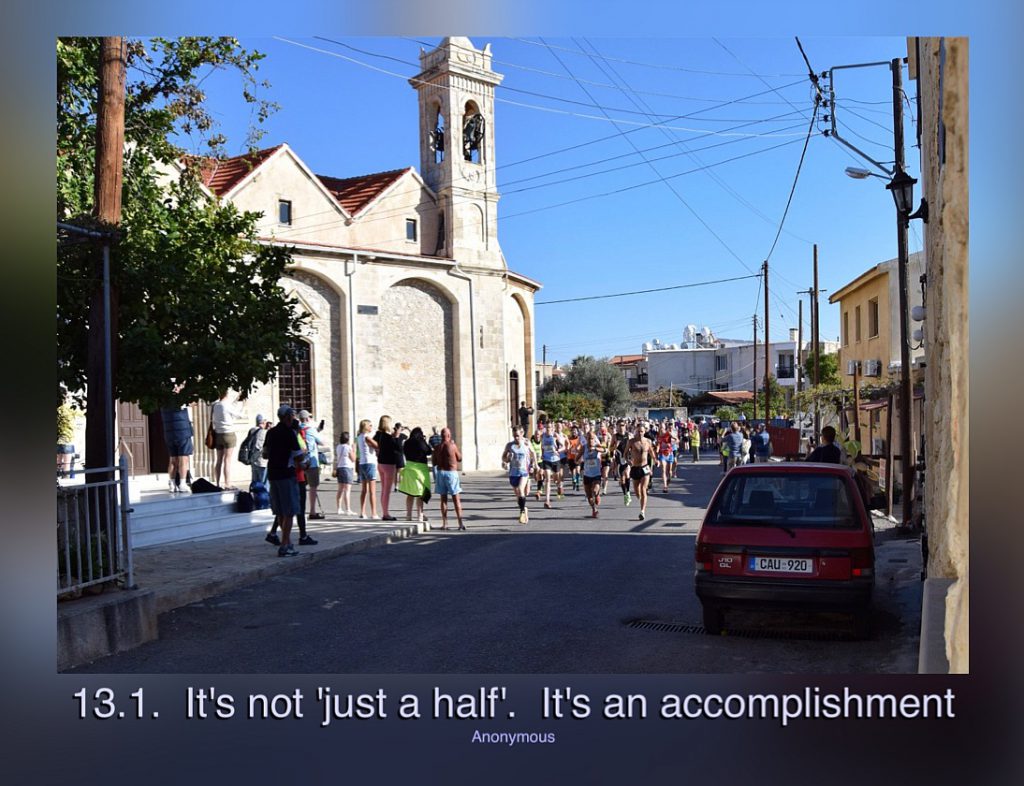 The bells continued to ring as the runners streamed past me up the hill. For a while I thought I’d missed Commando in the crowd then, just as I’d given up hope, I spotted him. Moments later he’d disappeared between the houses. 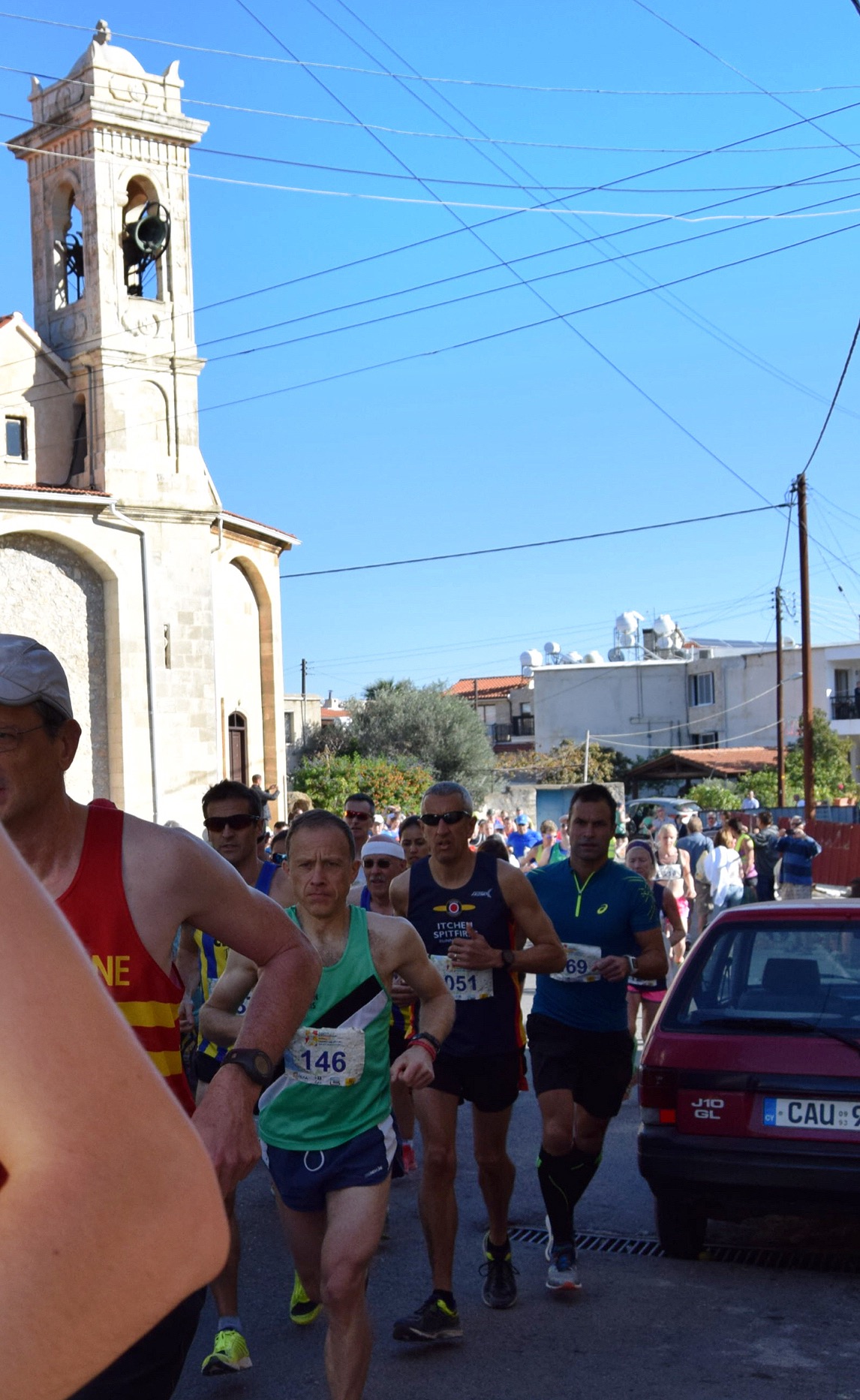 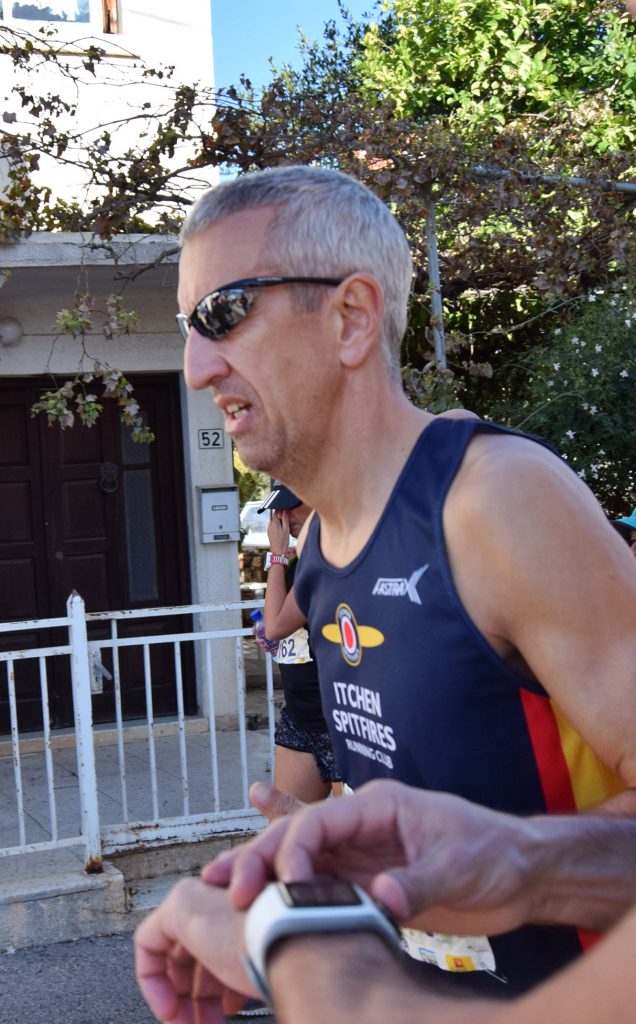 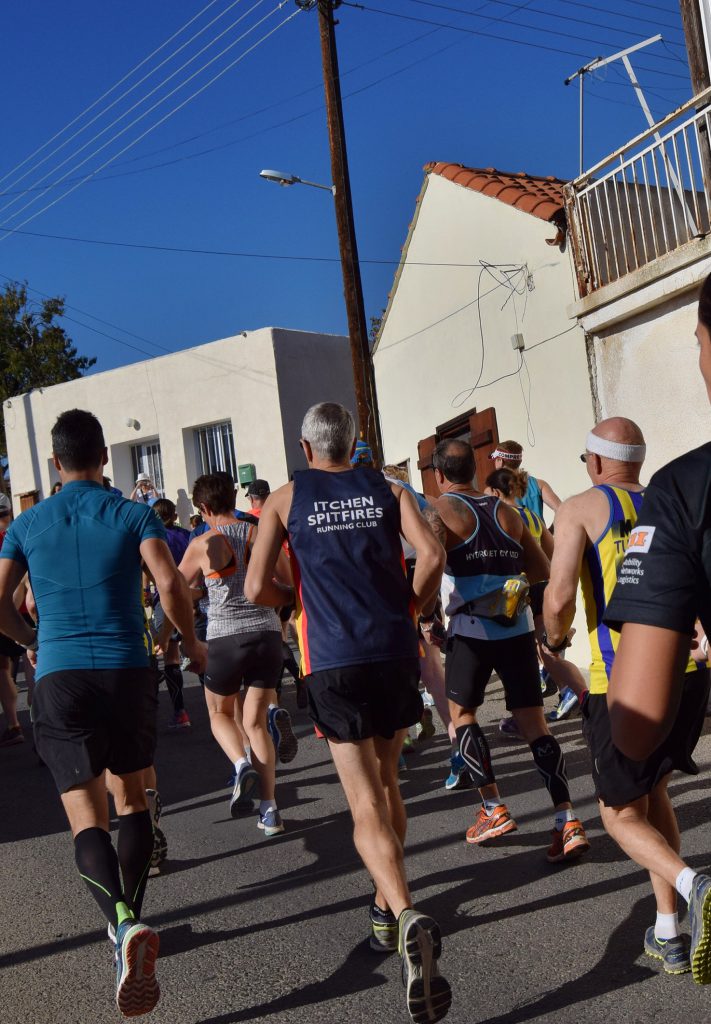 Once the last of the runners had gone the church bells fell silent. With just a handful of spectators and organisers left, the village suddenly felt very quiet and deserted. Now it was time to get back on the coach and head for the beach… 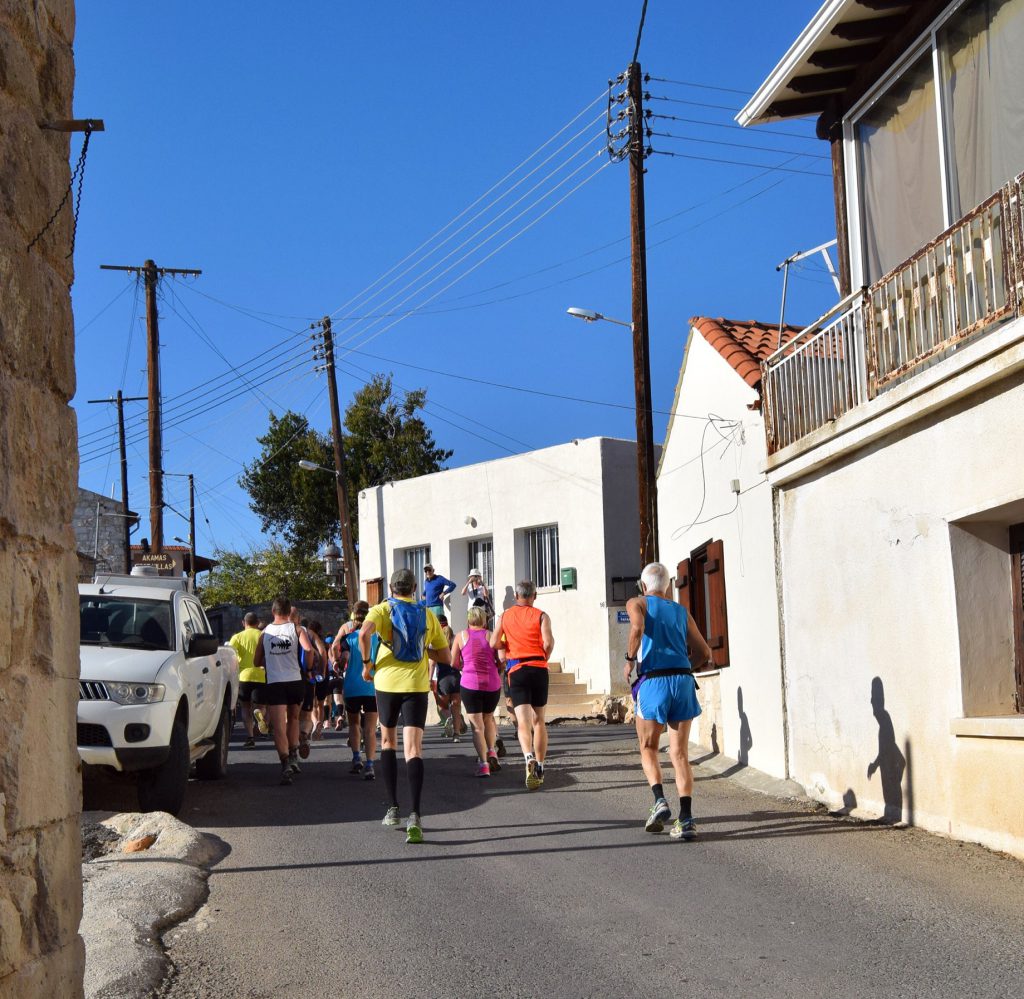 6 thoughts on “Another day, another race, the Akamas Multiterrain Half Marathon”