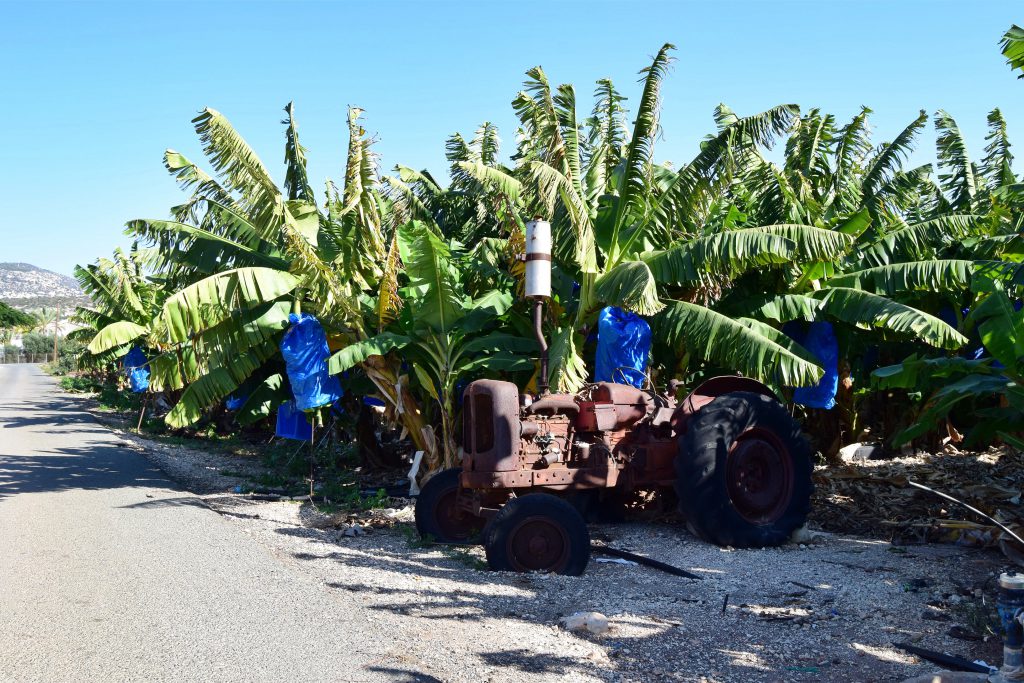 Even before Sue joined me on my walk to the shipwreck I’d planned to return along Sea Caves Road. For one, it was a far shorter route than the meandering rocky one along the cliff top weaving in and out of all the little coves. It was also, in part, the walk I’d taken this morning with Eddie. Then I’d been busy talking and I hadn’t had my camera with me. There were a few things I wanted a closer look at.

Before I set out I’d had a good look at Google Maps. Sadly, Cyprus does not appear to have been visited by the street view car so there’d been no chance to virtually walk any of the route. The shipwreck and Yialos Tavern were marked on the map and, close to the wreck, a cafe called Oniro where I’d planned to stop for a coffee. Sadly, the cafe was closed, like so many things in Cyprus in November.

As we walked along the rough gravel track towards the road I was curious about another landmark I’d seen on the map. It simply said Tractor and, although I couldn’t see any buildings from the satellite, I was half hopeful it might be an open cafe. It wasn’t long before the mystery was solved, at least in part. It wasn’t a cafe or any kind of building. It was actually a real tractor, very old and rusty, on the edge of a banana plantation. 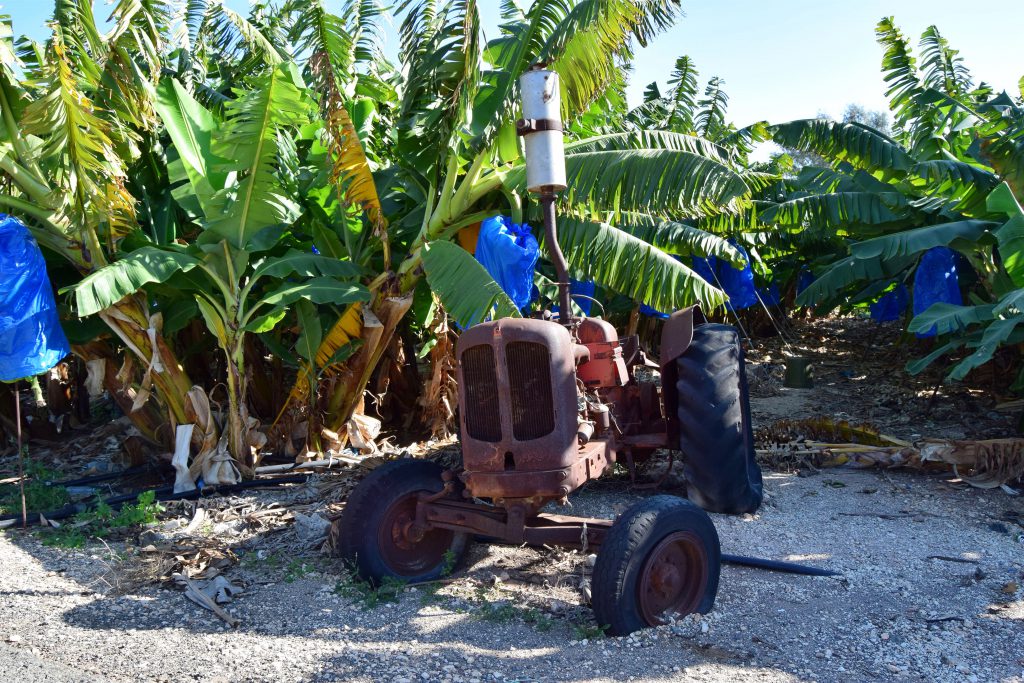 As we stood looking at it, I thought there must be a story of some kind behind it but, despite lots of Googling later on, I couldn’t find one. Perhaps a fan of old farm machinery would be beside themselves to find such a thing and, as a fan of rusty, crumbling old things, I quite liked the look of it. It may be a very rare tractor for all I know but it did seem an odd thing to mark on the map. 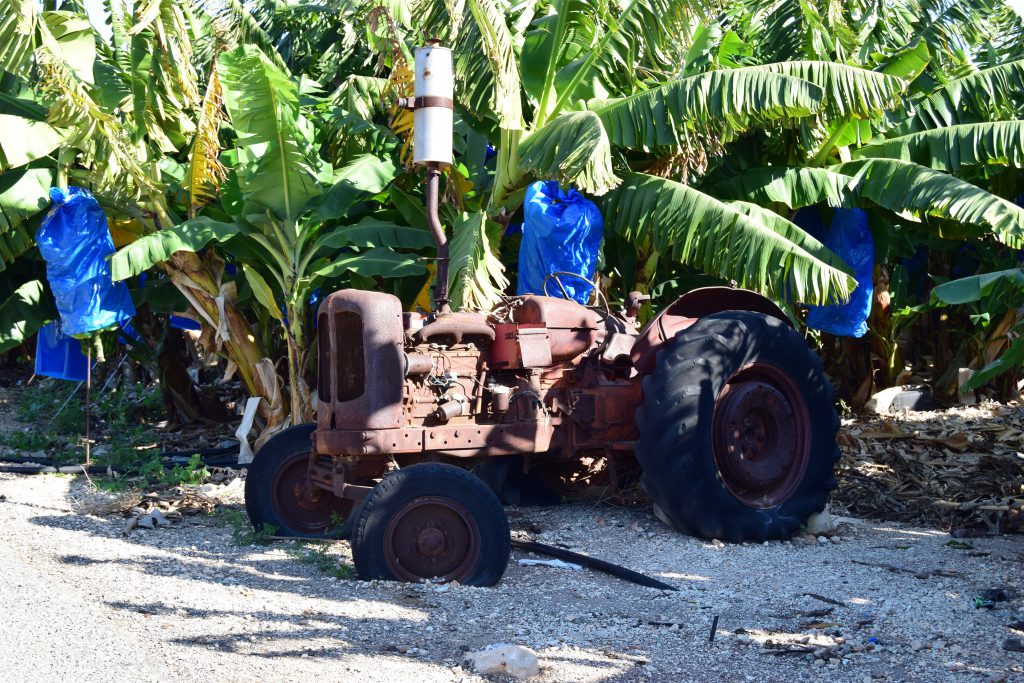 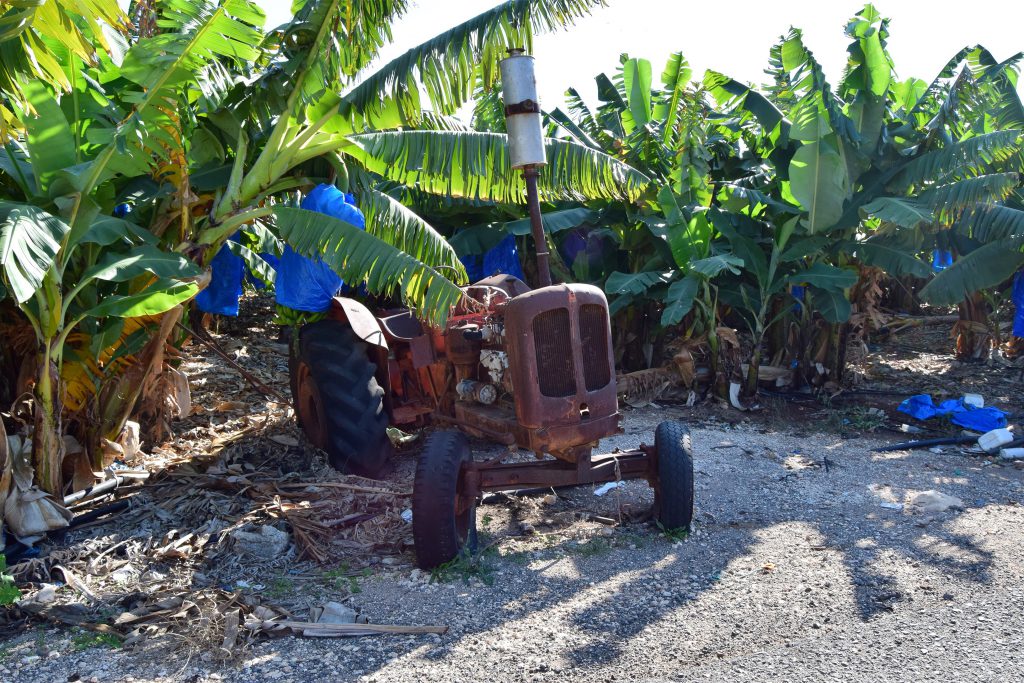 On Sea Caves Road we passed field after field of bananas, the fruits covered with blue bags. Apparently the bags provide a microclimate to speed the growth of the bananas, protect them from insects and stop them being bruised on windy days. Blue is the favoured colour for the bags because it lets in the best range of lightwaves for photosynthesis while blocking UV rays that might scorch the fruit or turn the peel hard. Bananas seem to be one of the main crops in Peyia.
“I wonder if they export them,” I mused, “although I’ve never seen a Cypriot banana in the shops at home.”
“Perhaps they just eat a lot of bananas in Cyprus,” Sue said. 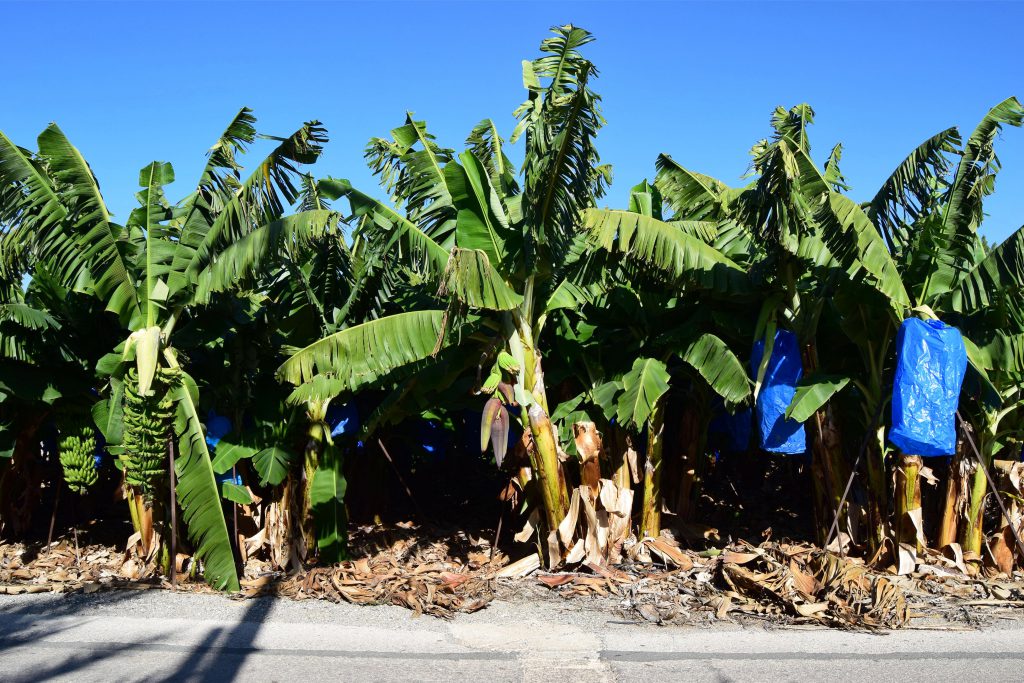 Occasionally we came across a field with something other than bananas. One was filled with large citrus fruits, probably grapefruit, and another with olive trees crowded close together and covered in ripening fruits. It really did feel as if every inch of land here was devoted to growing food of some kind. 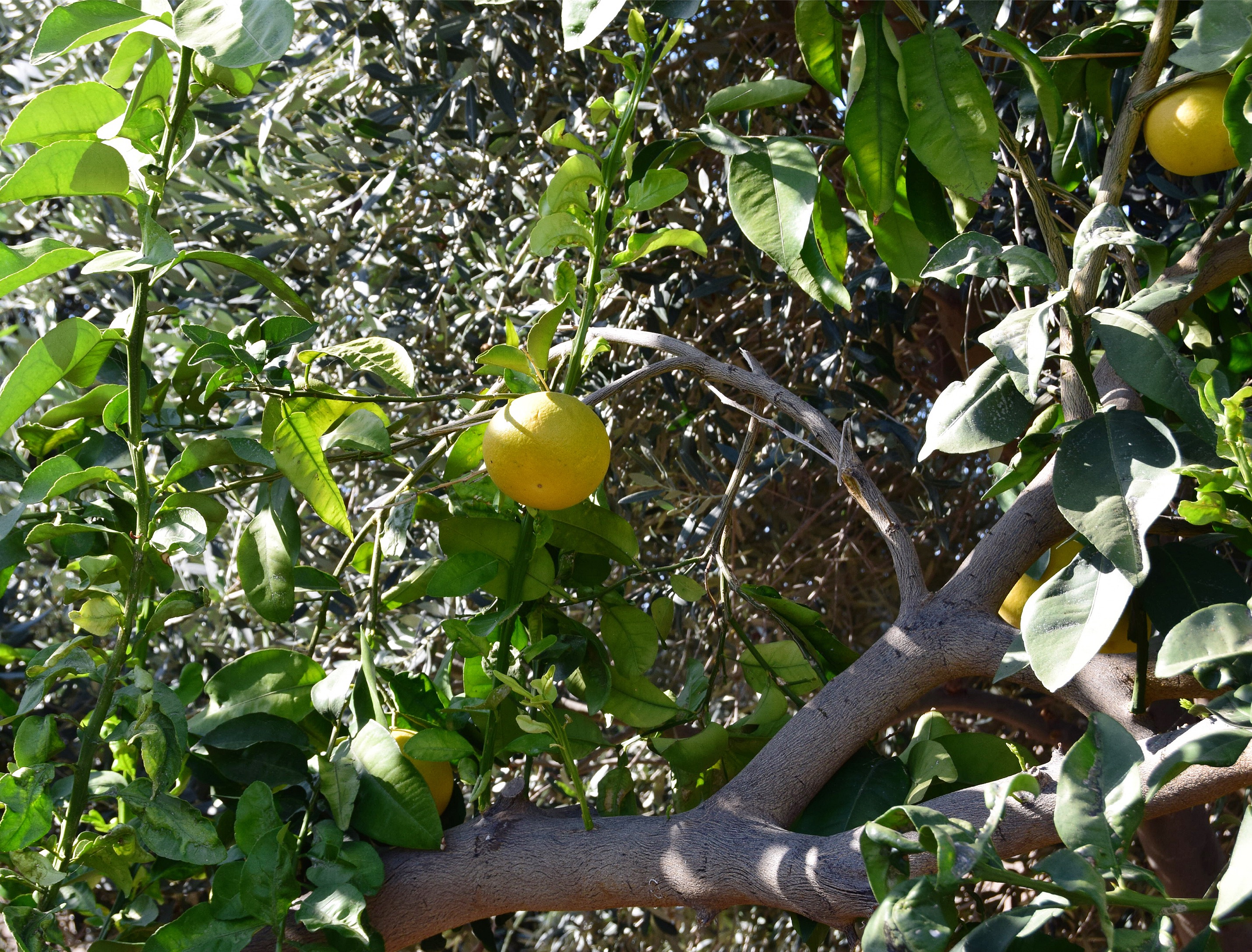 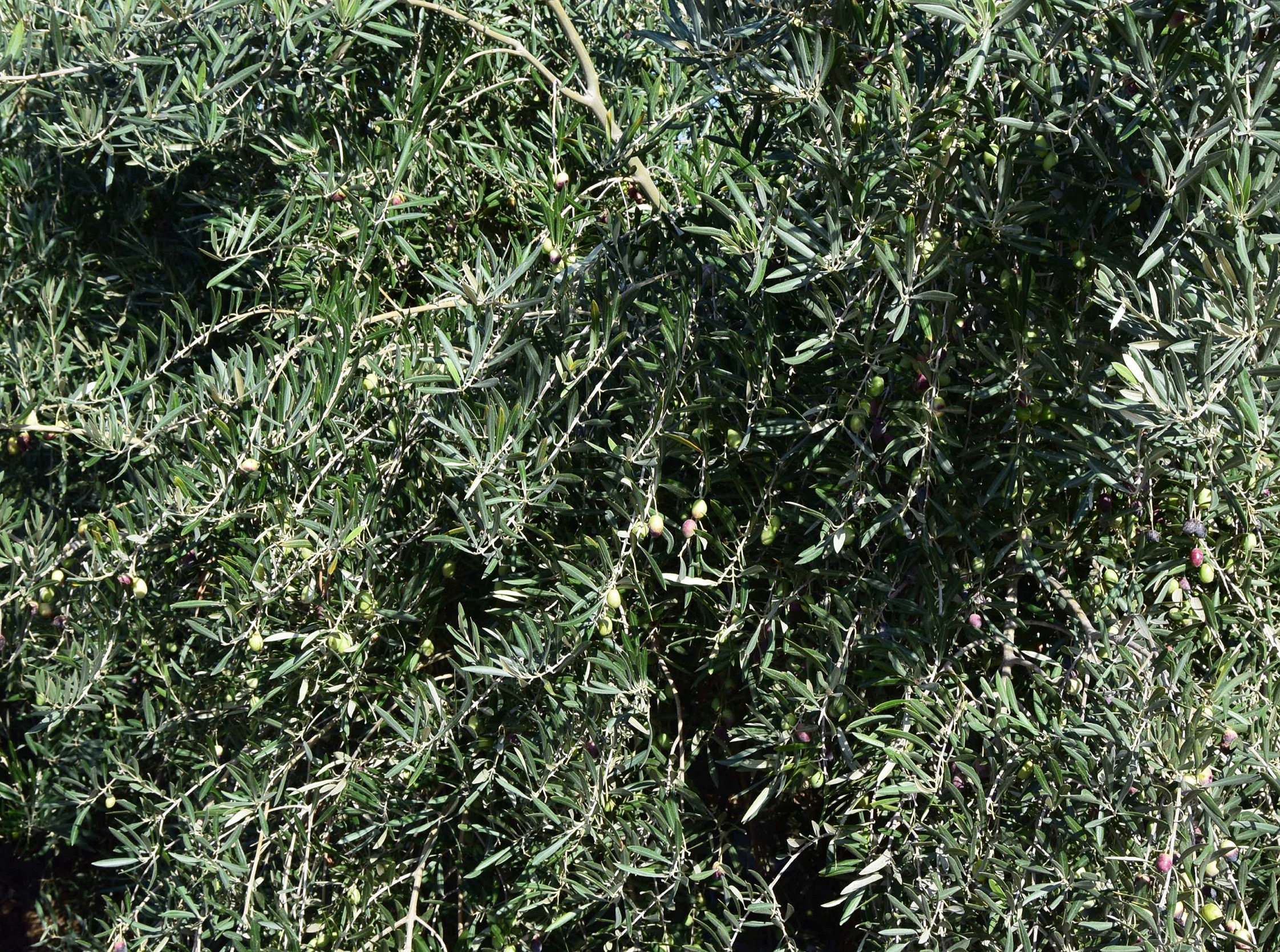 After a while we passed a large gateway with an arch of white and pink bougainvillea above it. Beside the open gates a large cactus captured my attention. It was smothered in orange fruits. In a place that seemed to be so dedicated to growing food I couldn’t help wondering if they were edible. Later on a little Googling told me they were prickly pear, or opuntia, and can be eaten. The genus is named for the Ancient Greek city of Opus where they were said to grow. 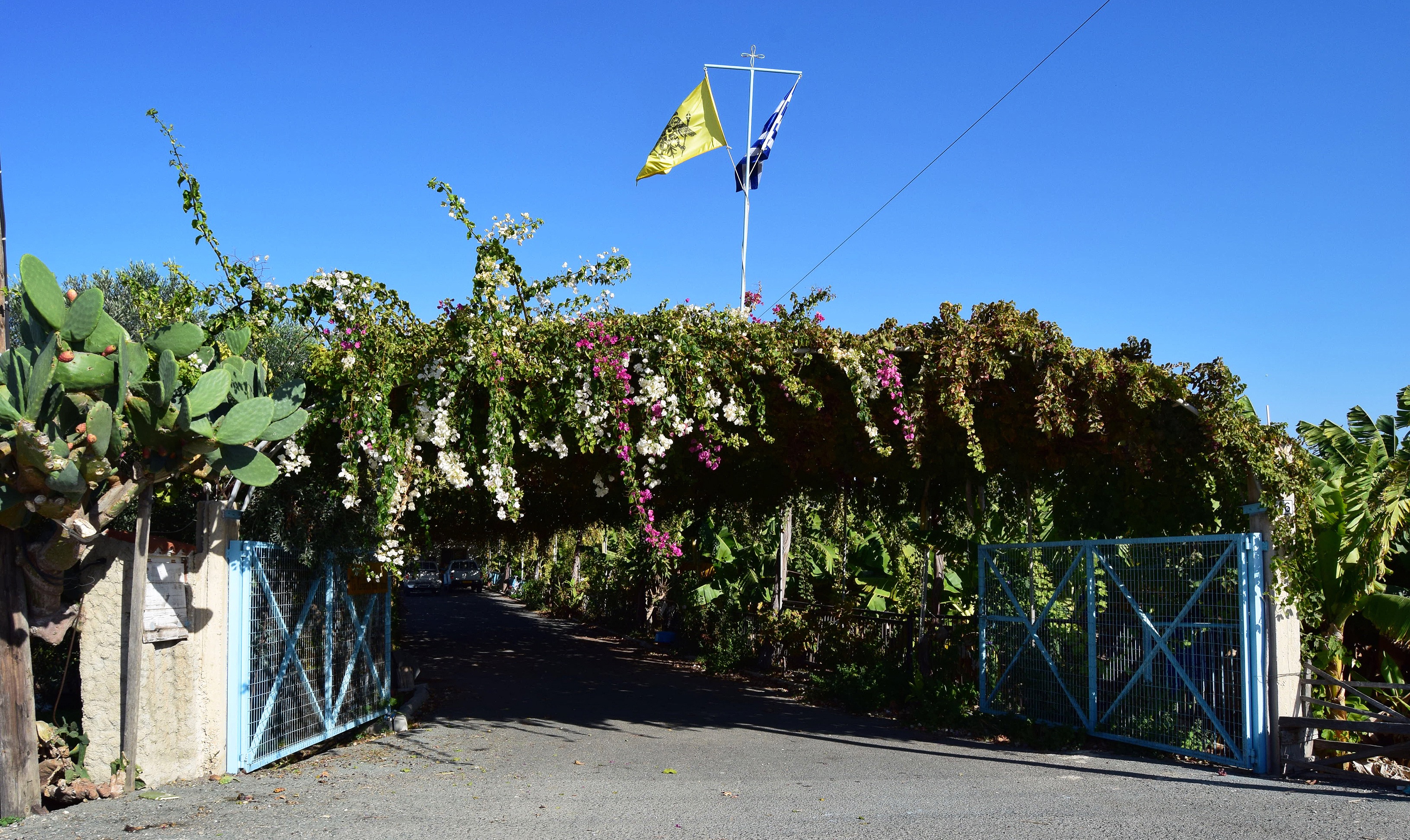 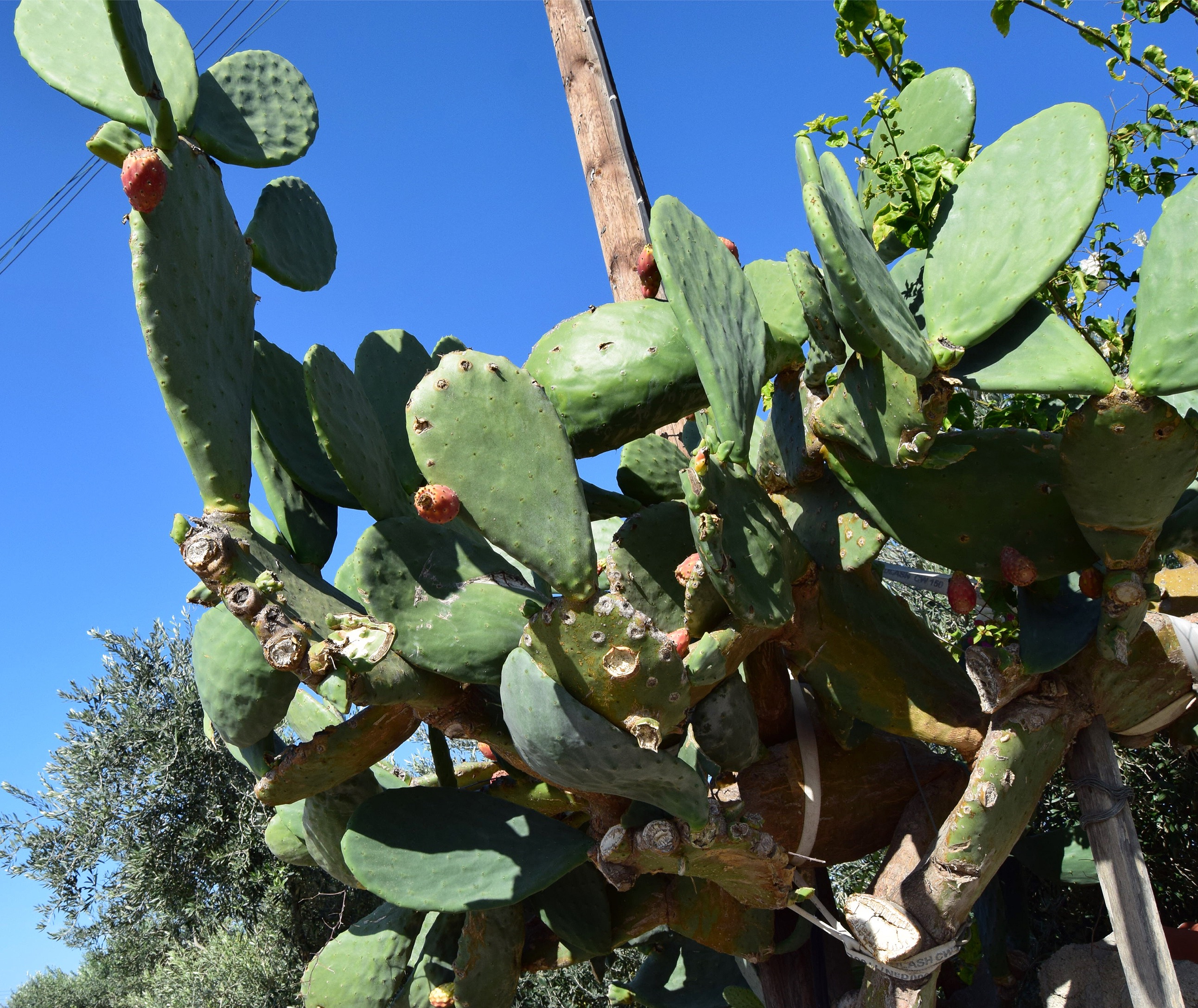 In the fenced off fields beside the gate there were more fruit trees. At first we thought they were apples but, on closer inspection, they turned out to be pomegranates. Seeing the bright red fruits reminded me of the Greek Myth about Persephone who was stolen away by Hades the God of the underworld. When her daughter went missing, Persephone’s mother Demeter, the Goddess of harvest, was so distraught the earth grew cold and all the plants died. Meanwhile, in the underworld, Persephone refused to eat or drink, knowing, if she did, she would have to stay there forever. Eventually, Demeter found Persephone, but not before she had given in and eaten six pomegranate seeds.  Because of this she could not return forever to the world of sunshine and flowers but had to spend six months of every year below ground with Hades and leave the world above in winter. 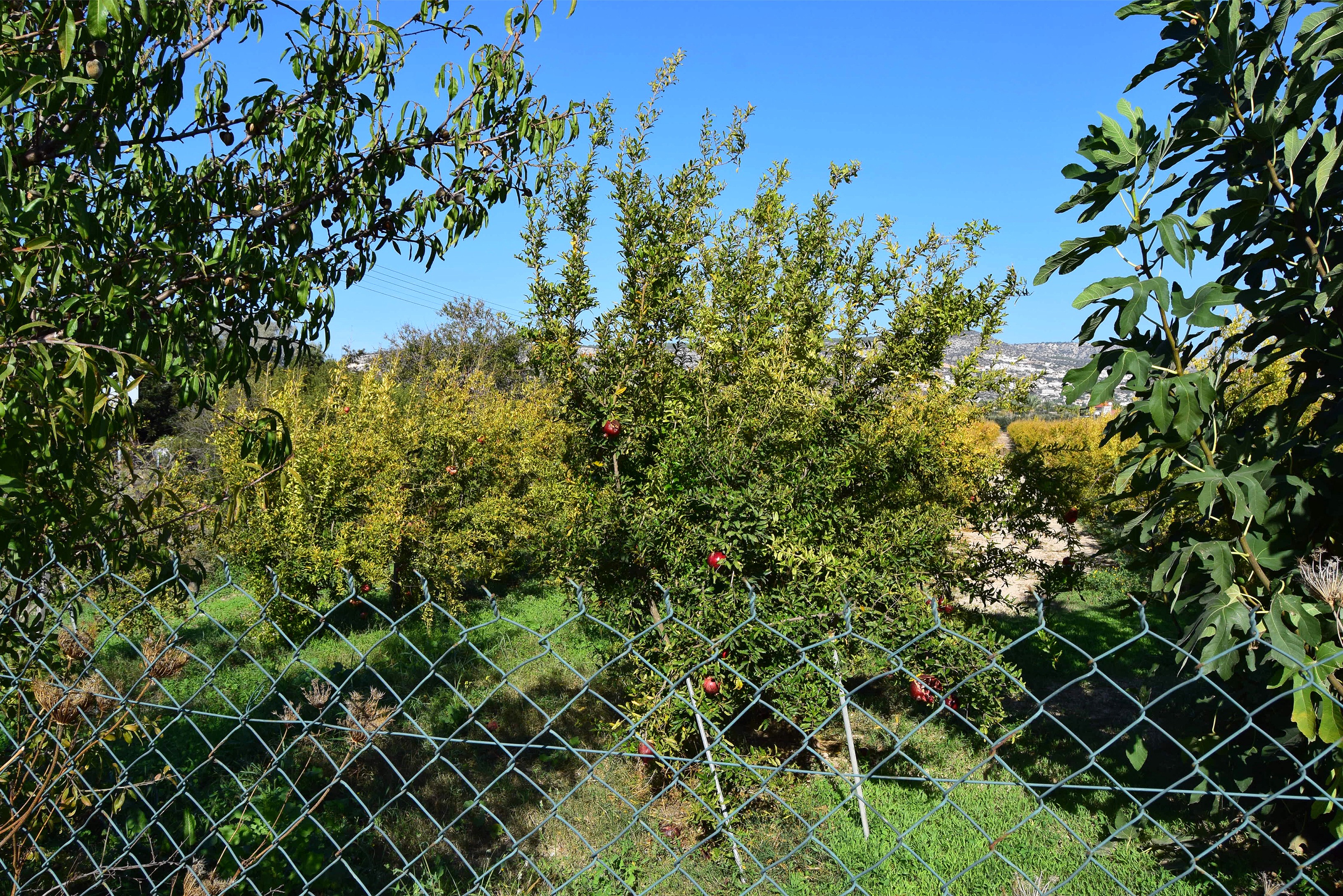 These were the first pomegranates I’d ever seen growing on a tree and I was surprised at how like apple trees they looked. The fruits hung singly and in bunches. Oddly, many of them seemed to have burst open on the trees revealing the ruby like seeds within. They looked so lovely, if it hadn’t been for the fence, I might have been tempted to steal one. No wonder poor Persephone couldn’t resist them. 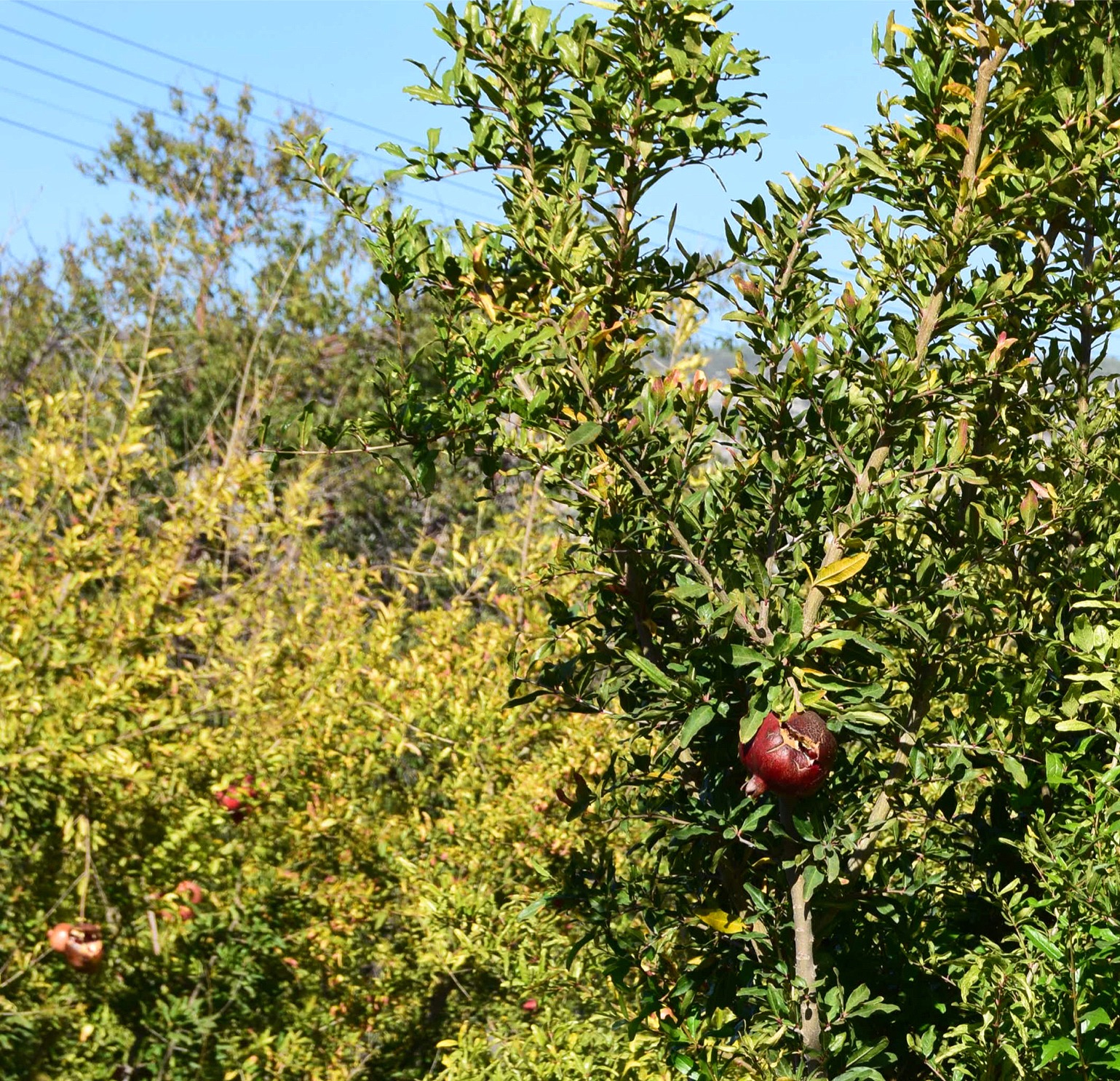 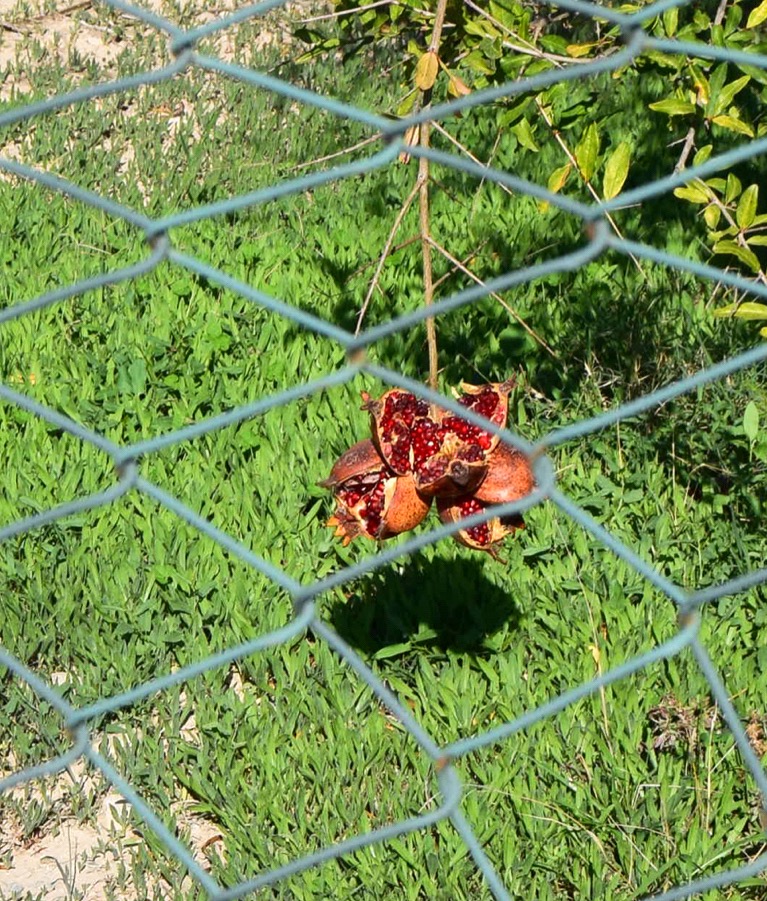 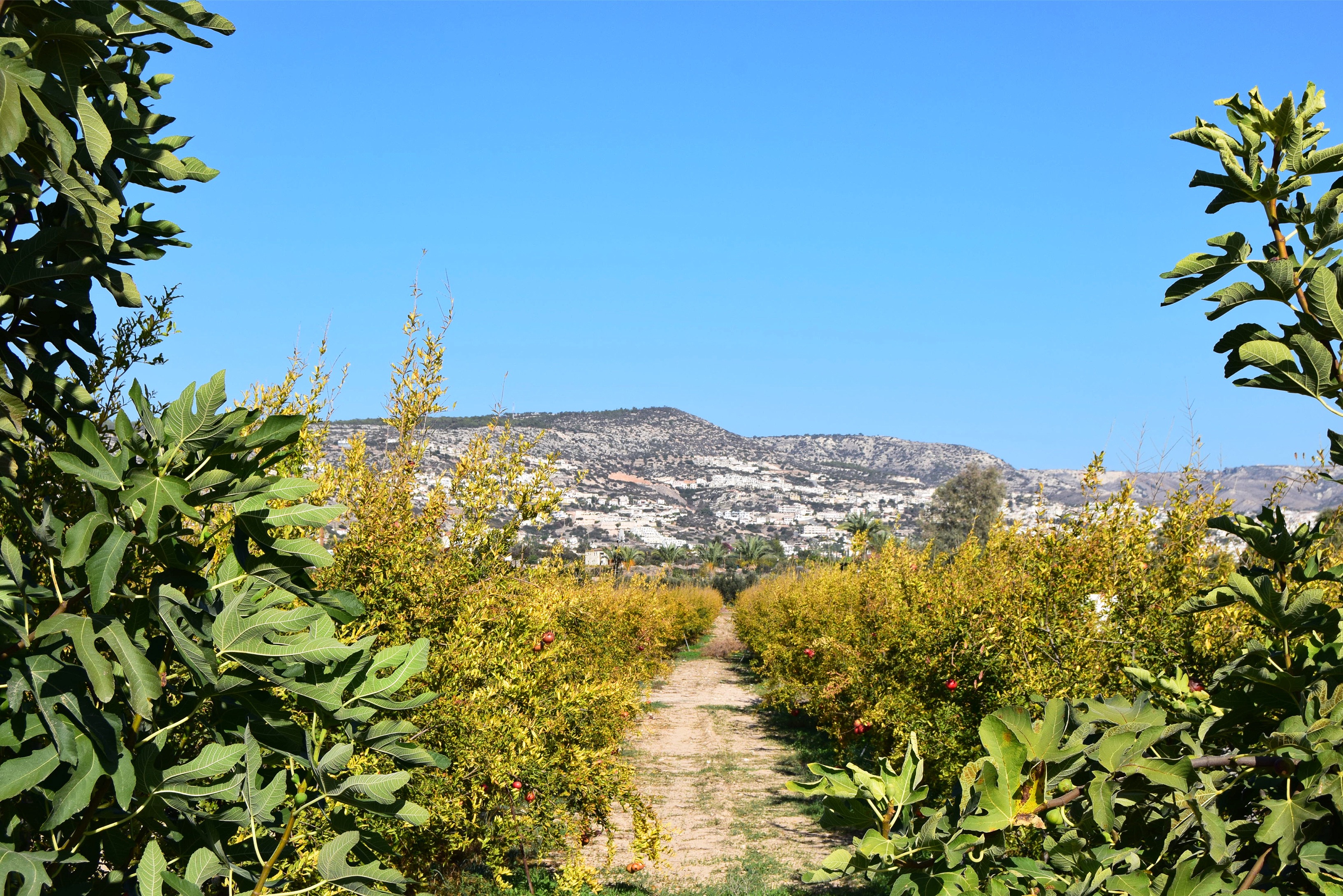 Soon the fields filled with fruit trees gave way to houses and I knew we were almost back at the hotel. A large proportion of the population of Peyia are British people who have relocated here and many of these properties belong to them. Along this stretch of road many of the houses and apartments are new and more are being built. We passed several in various stages of construction. If the summers were a little less humid here I might be tempted by one myself. After all, it would be nice to be able to grow bird of paradise plants in my garden like the ones we saw. 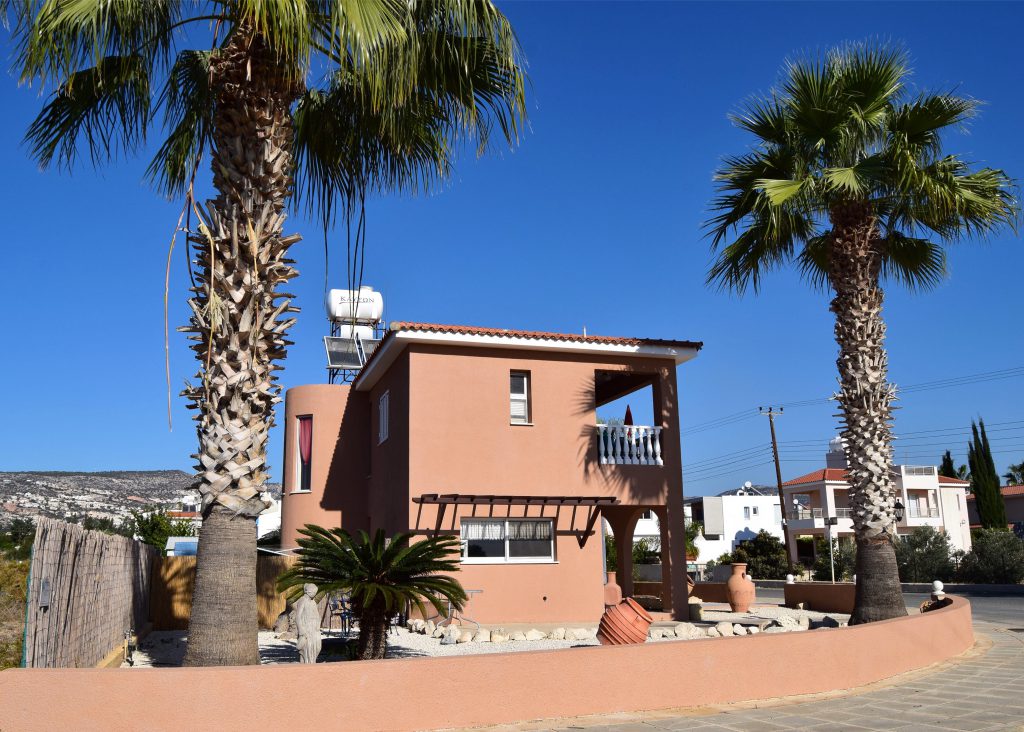 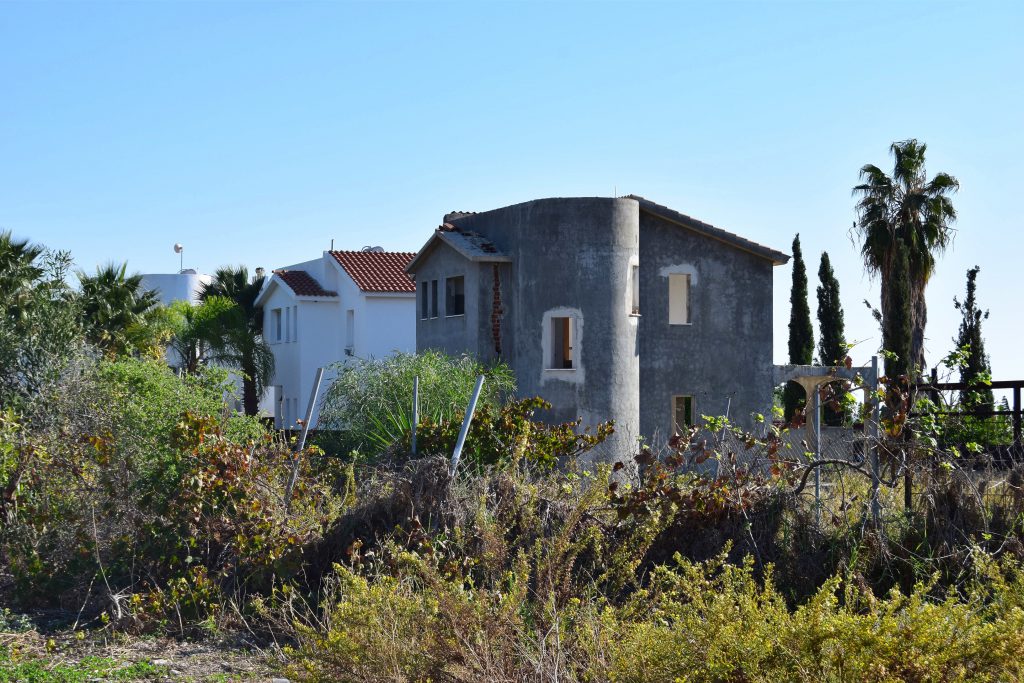 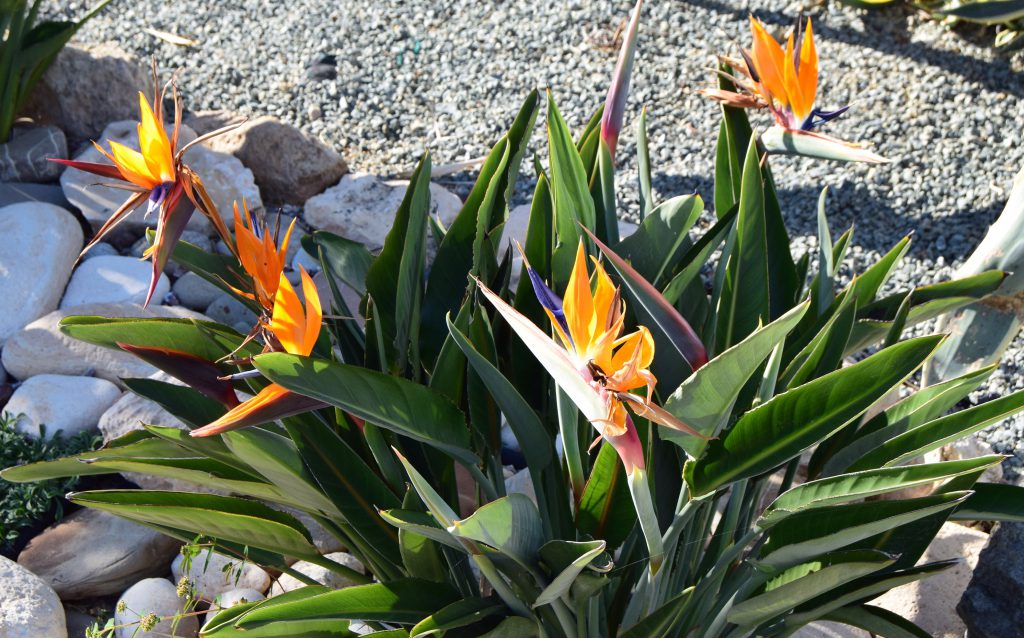 For all my worrying about Sue being able to manage the walk it was me who was fit to drop by the time we got back to the hotel. My water bottle was almost empty and after my morning march with Eddie and the heat, the clambering over rocks had taken its toll. Commando was still laying on his sunbed and I sank gratefully onto the one beside it. Sue, on the other hand, looked as if she could do it all again even though she’d walked just as far as me and had gone for a morning run with Commando.

To my shame, I spent the rest of the afternoon rooted to my sunbed reading my kindle. In fact I didn’t move again until the sun began to go down. We watched it sinking slowly into the sea from our balcony window. When it had finally gone, leaving just an orange smudge on the horizon, the twinkling stars came out, echoed on the water by brightly lit boats. I could have sat there forever but it was soon time to walk up the hill and find somewhere to eat. 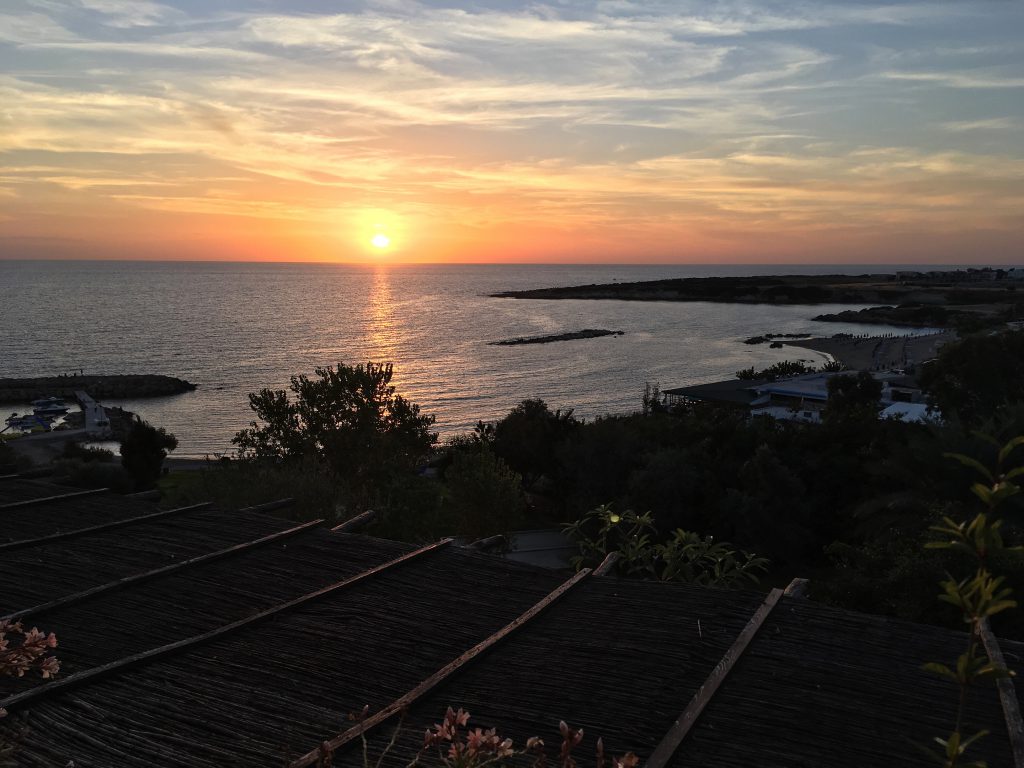 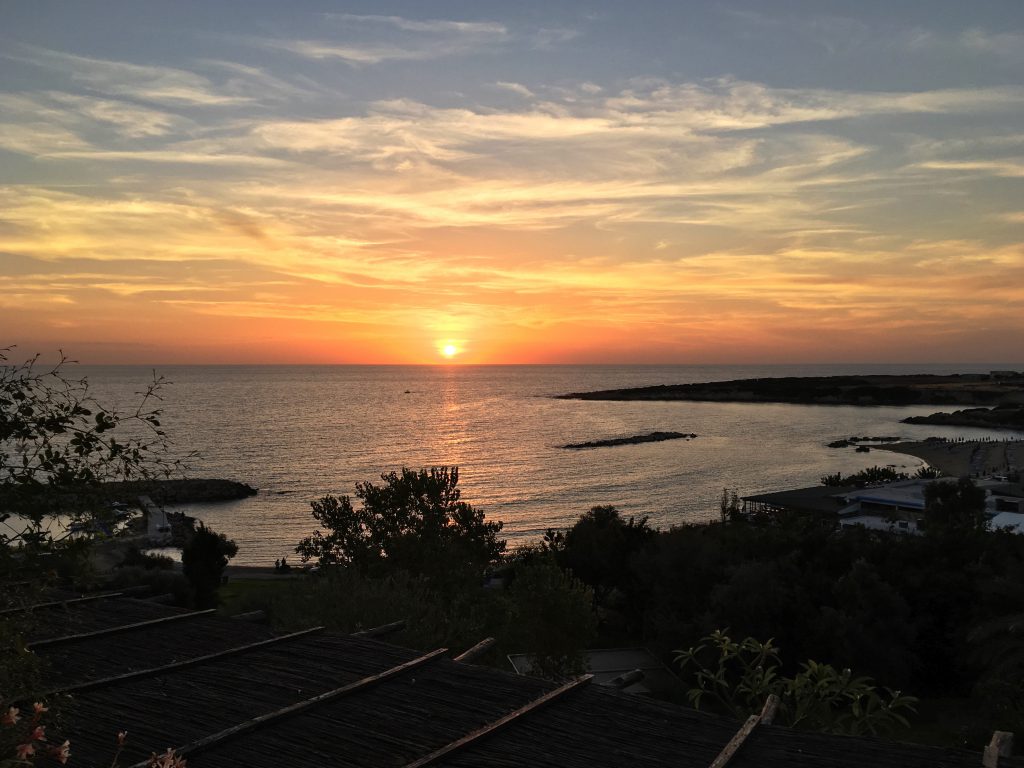 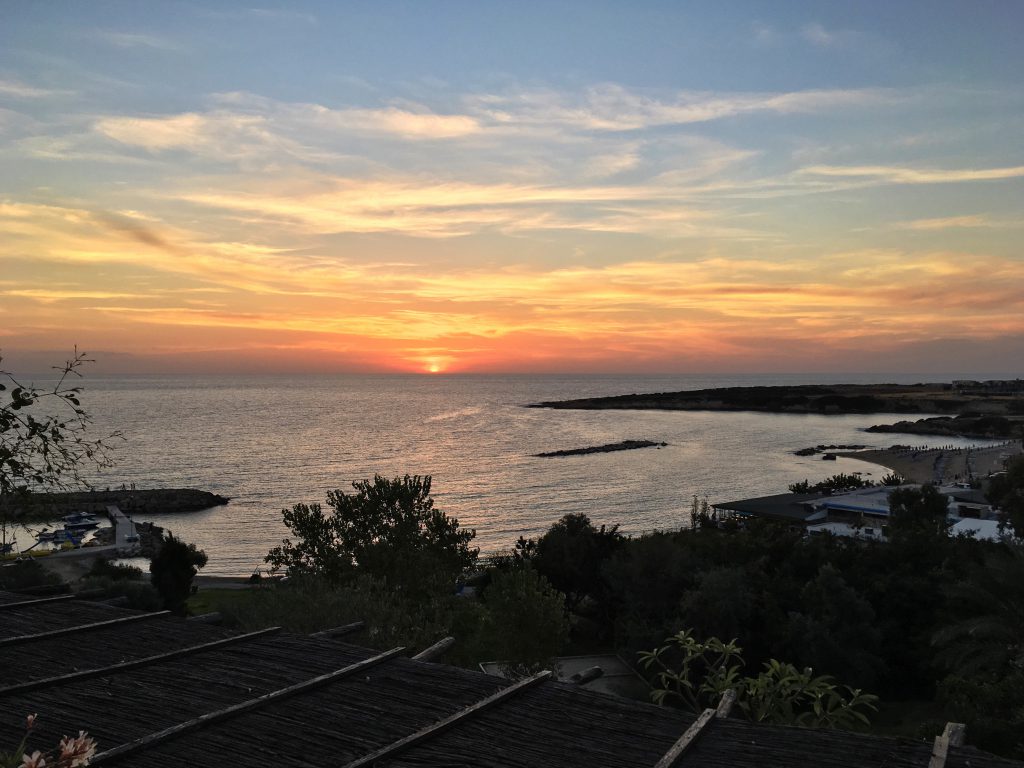 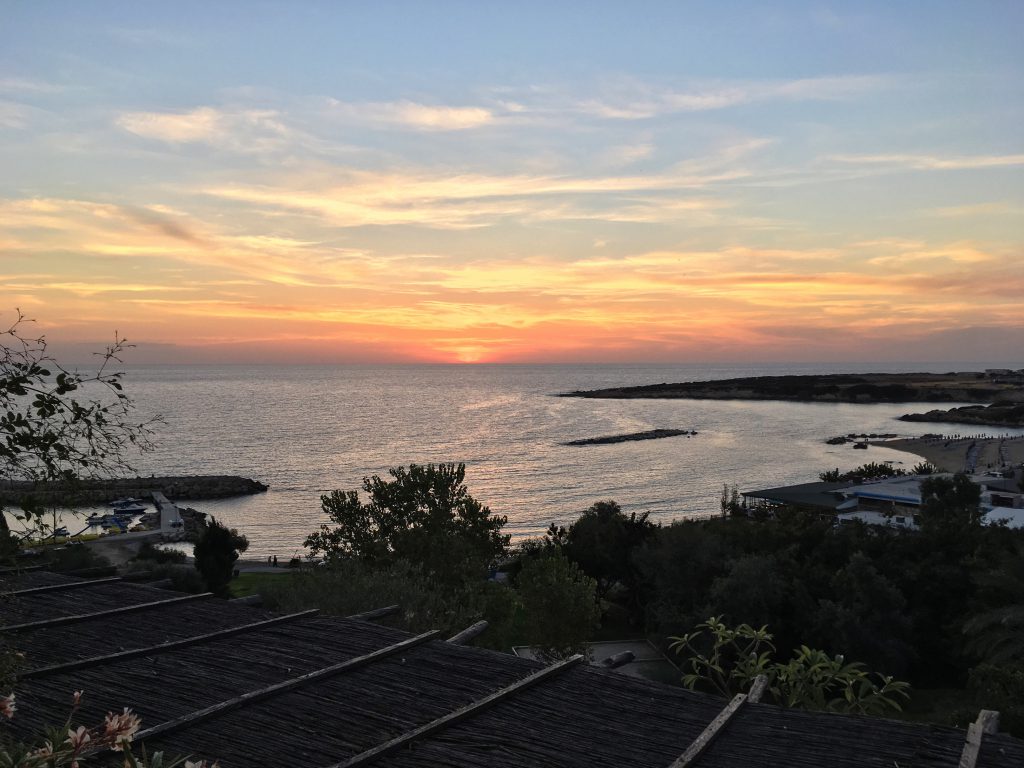 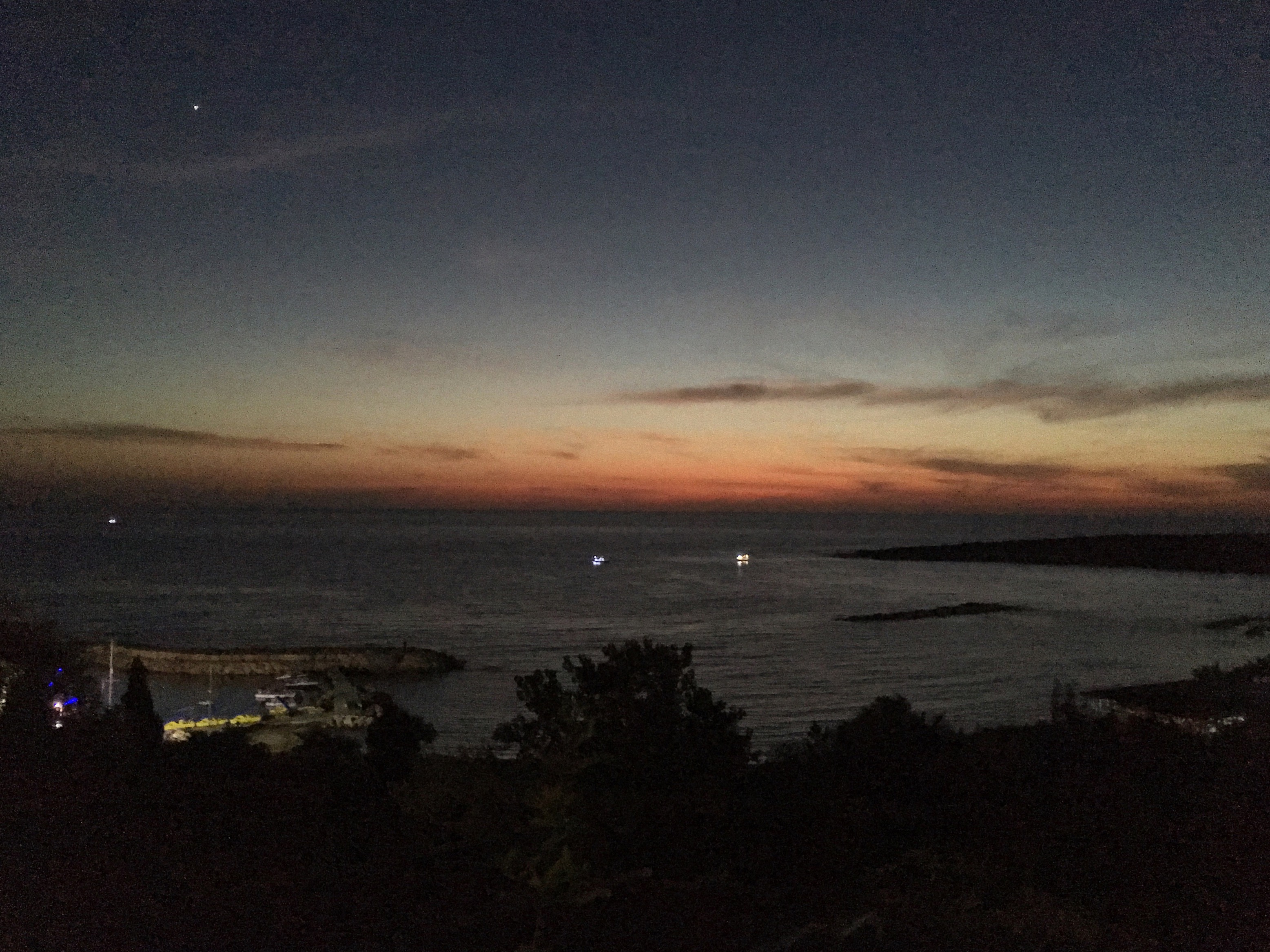 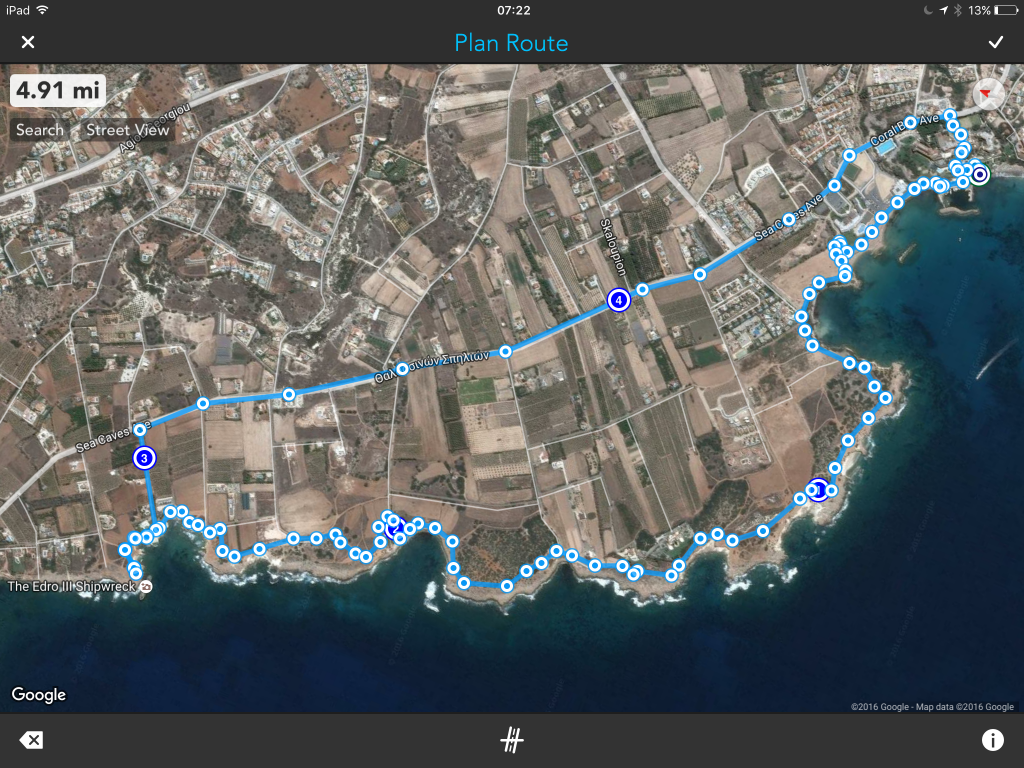