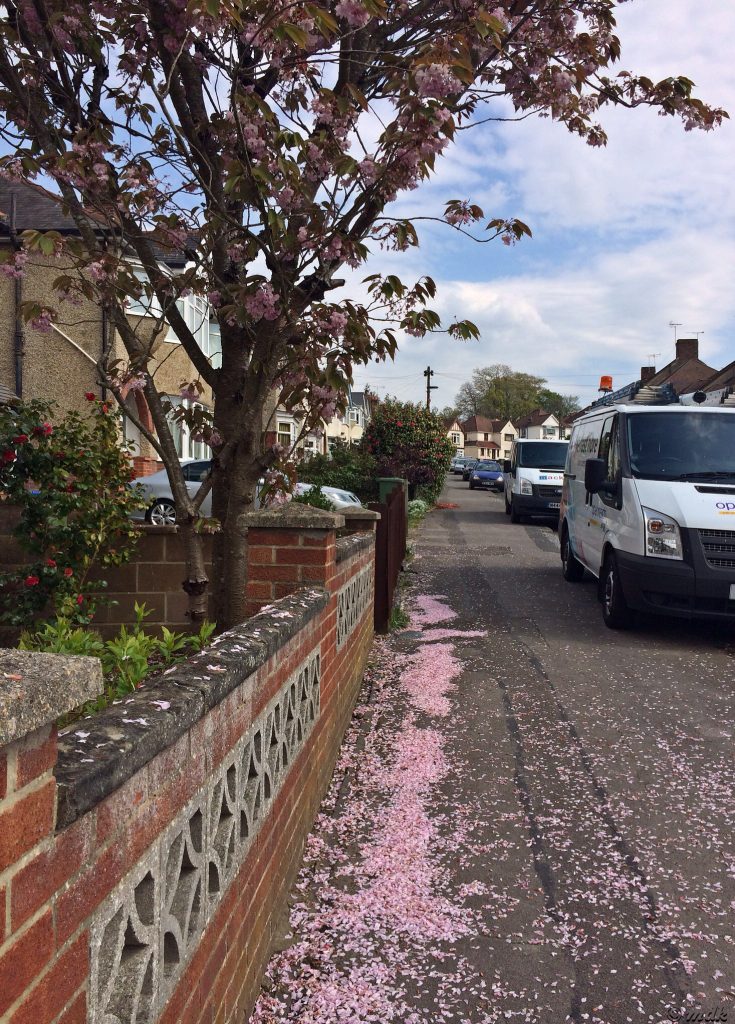 Late April 2014, and, after a windy rainy day the weather brightened up leaving the pavements everywhere littered with fallen blossom. I laid the blame for the bad weather firmly at Commando’s door for getting the sun loungers out from under the decking. Now the sun was out but there was precious little time for lounging. First we had to go up the Big Hill to Sainsbury’s for supplies. Strangely we thought we saw Hetty from NCIS Los Angeles wandering round with a basket on her arm and I swear she was following us. Maybe an NCIS Southampton is on the cards at some point?

With the shopping done and, surprisingly, the sun still out, Commando decided to go for a run. Despite a million and one jobs to be done in the garden I thought I’d go for a walk. I’ve missed my lunch time wanderings and I fancied having a look at the parks in town. We agreed to rendezvous in town later. As I walked up the drive I thought I could detect a faint smell of lilac and, sure enough, a few of the flowers have just begun to open, mmm the smell of spring. 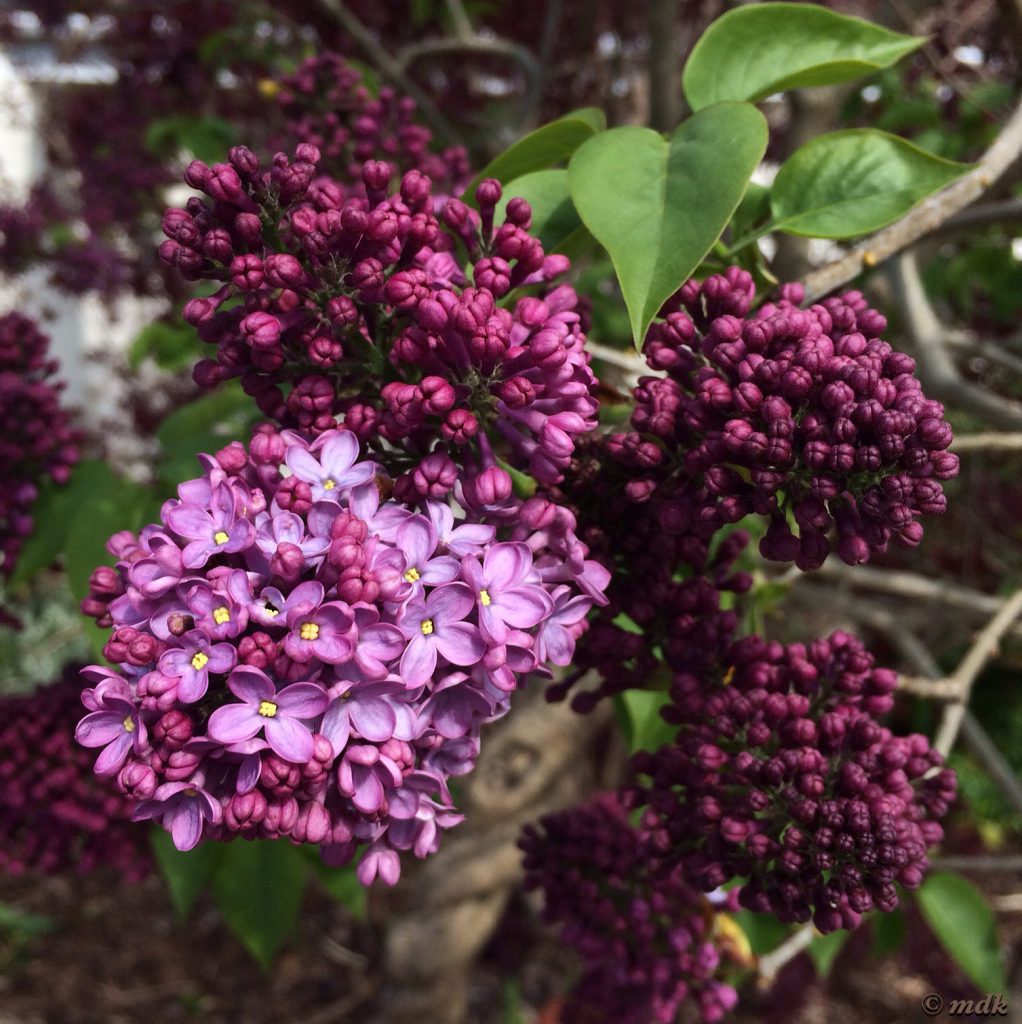 On the way to the river path a few petals were clinging on to the blossom tree. It seems the pink ones have fared worse than the white. The tide was quite far out so I stopped for a quick look at the wreck of the old jetty as I passed and again on the embankment to peek at the new buds on the whitebeam and maple trees. 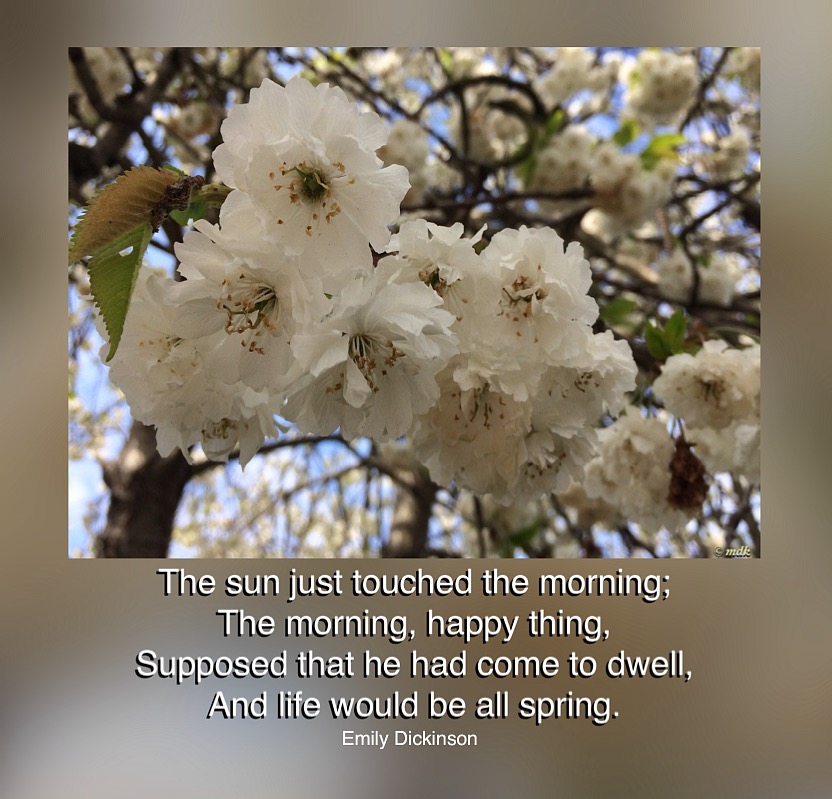 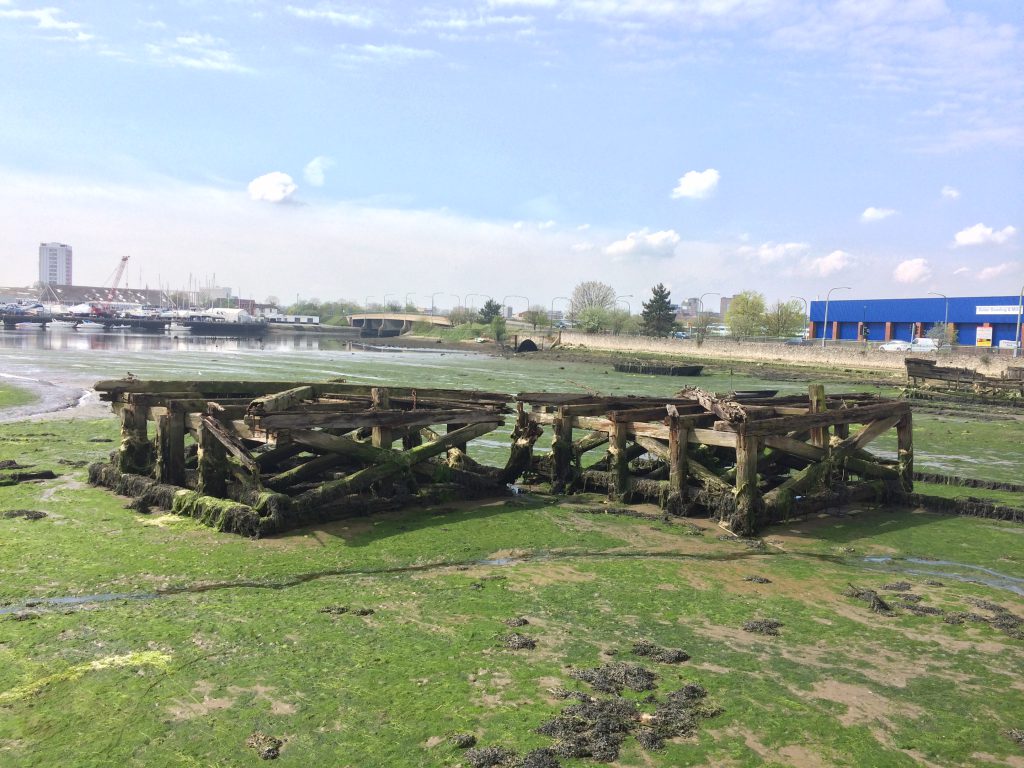 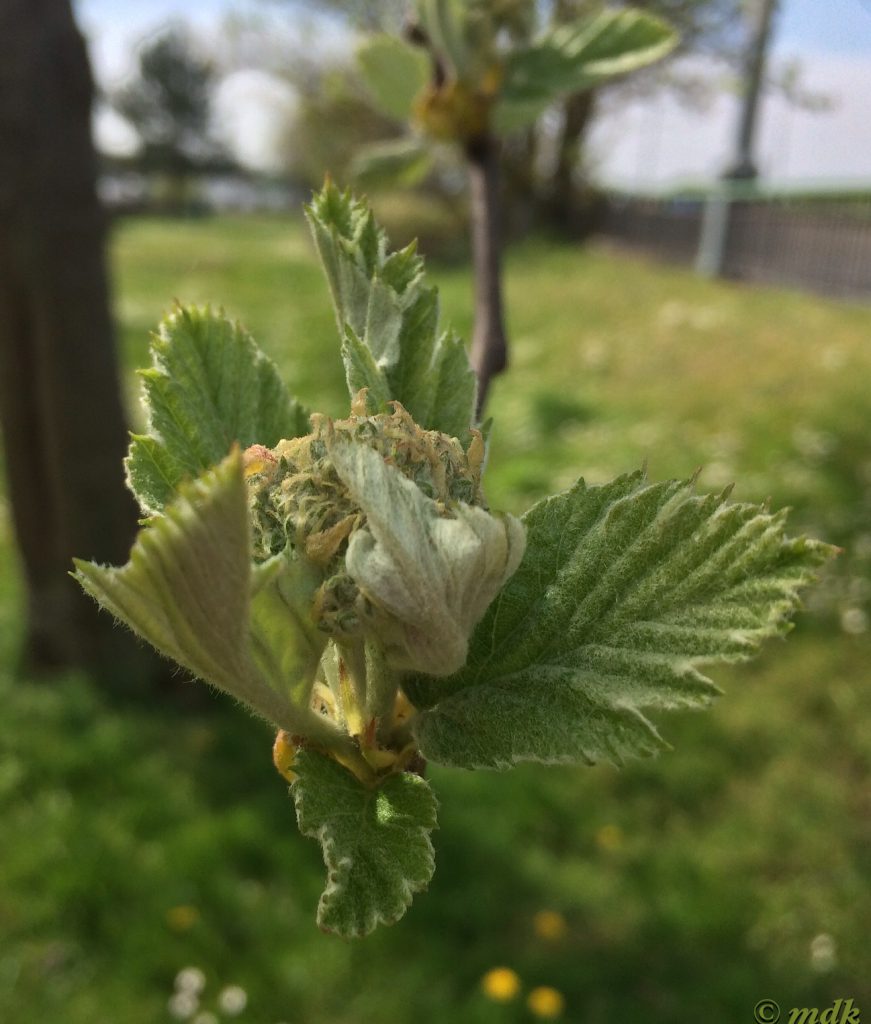 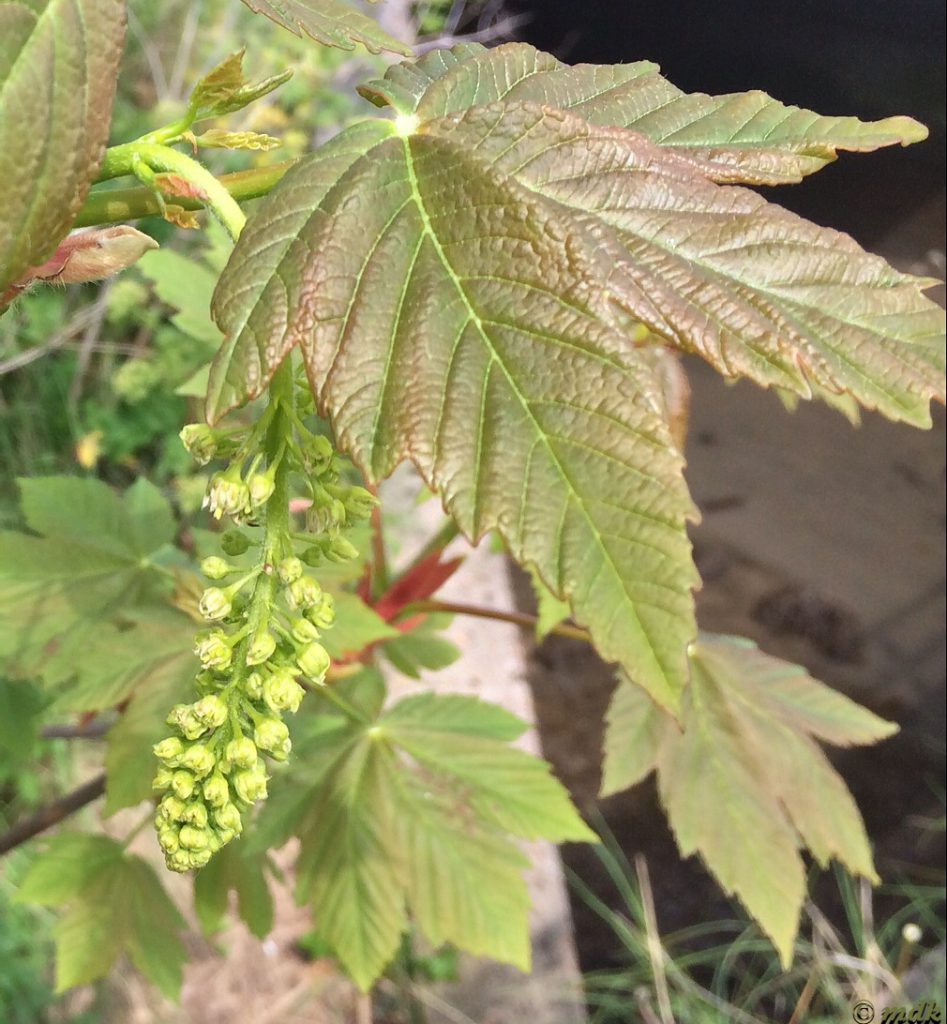 When I came up the steps onto the Big Bridge an eerie sight met me, a completely empty road! Yes, I know it’s Bank Holiday but I’m pretty sure I have never seen this bridge without a car on it in my life. At least it meant I could cross the road easily and my plan required being on the opposite side. On I went past The Shoal sculpture, it still looks like barbed wire to me no matter how much they say it’s meant to be fish. Maybe it’s just me? 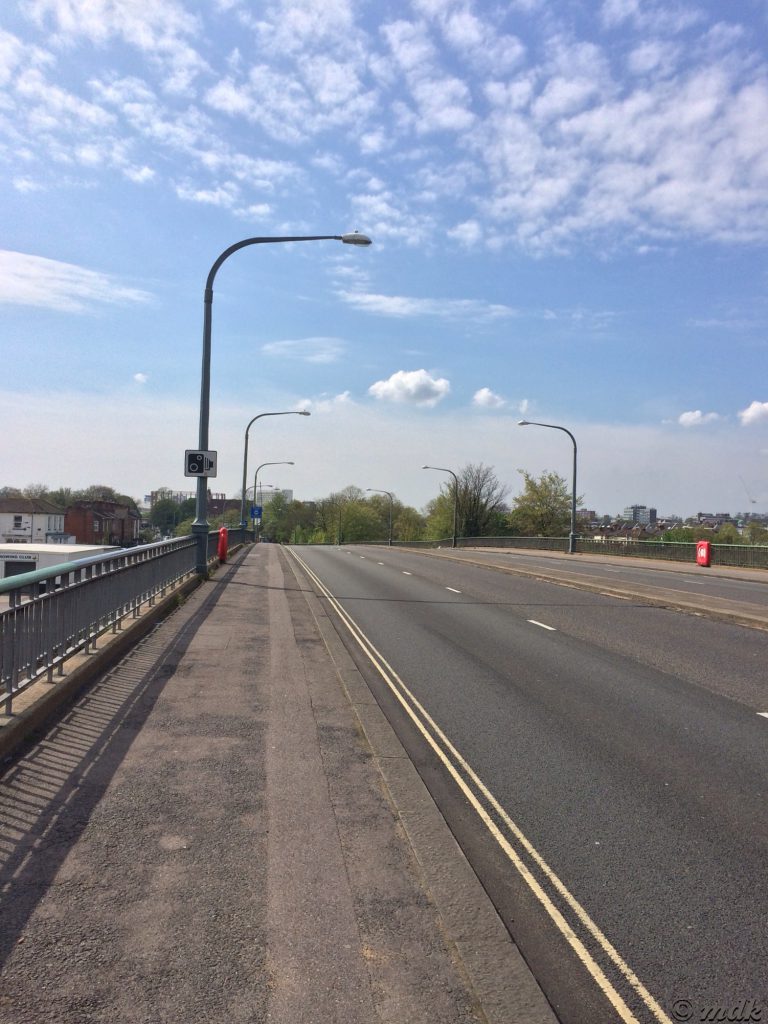 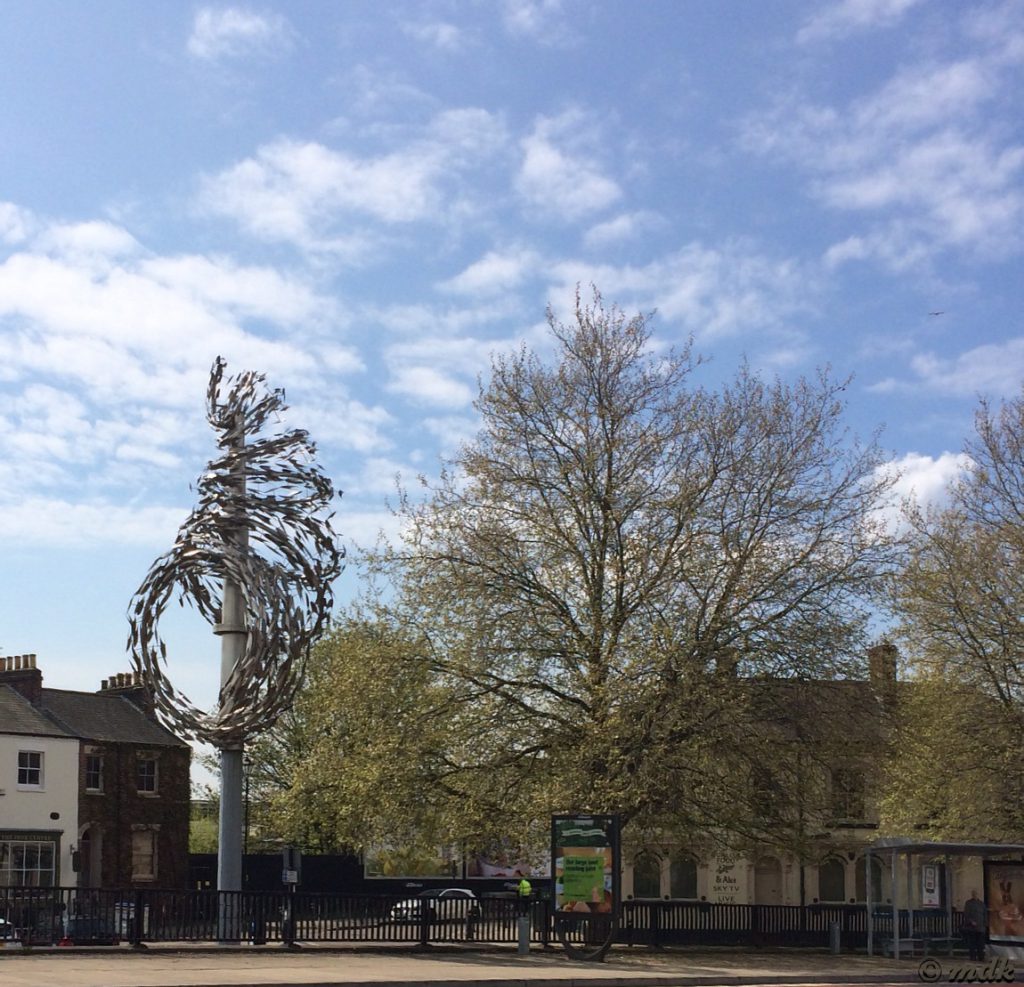 Once I’d passed the desolate park I was walking a very familiar route, the one I took every day for three years when I worked at The Mad House. I purposely didn’t look up the road towards that forbidding brown building because it still gives me the shivers even now. How I stuck it so long I will never know. Then I came to the underpass, a warren of subways that crisscross under Six Dials one of which is the subway mentioned in Craig David’s song 7 Days. There was white lilac in full bloom as I walked towards the tunnel. 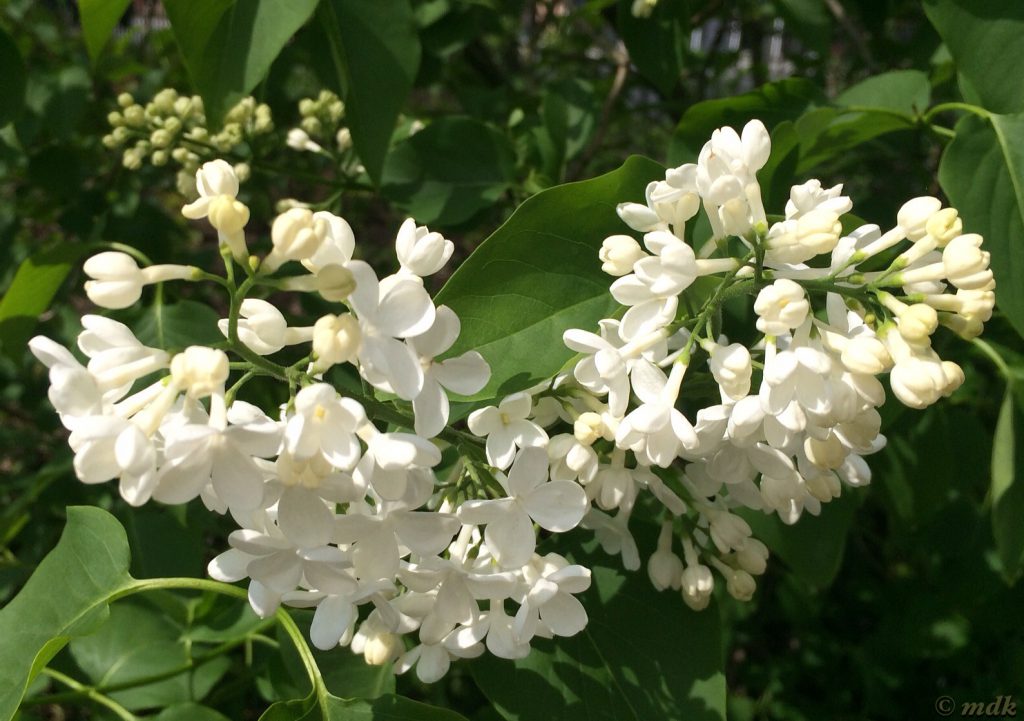 Now I’d seamlessly segued into a different walk to work. When I worked at Dream Factory I walked through the subway and past Solent University every morning. Seems I can’t quite get away from memories of my different walks to work in this city. On the other side of the subway I headed up towards the top parks. The cut way past the old ambulance station I took every morning is blocked off now, the ambulance station demolished. They’d just begun to pull it down when I left Dream Factory and I remember seeing someone climbing into the window of the abandoned building one morning and wondering if I should report it.

East Park, or Andrew’s Park is purported to have the highest concentration of trees, shrubs and flowers of all the city parks and I loved my early morning and late night walks through it. Today I felt a great nostalgia for those far off days when redundancy was something that happened to other people and I had the best job in the world. If I half closed my eyes I could imagine I was on my way to sort out an educational with the promise of a bag to be hastily packed. Mind you, half closing my eyes wasn’t a good plan because the top of the parks seemed to be teeming with the drunks and tramps who used to hang out outside Mad House. I marched past, head down to avoid eye contact as I learned to do walking through the war zone. My objective was the 1930’s built rock garden. 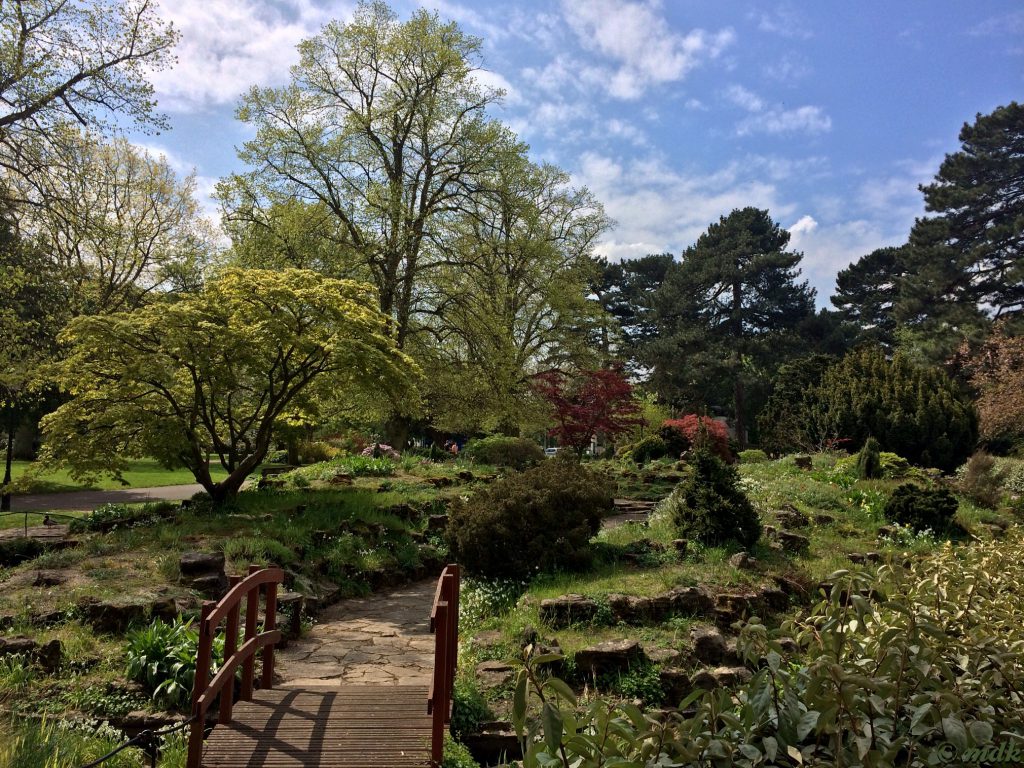 This at least was empty, possibly because there are no seats for the drunks to sit on clutching their bottles and cans. I took the winding crazy paved path over the first Japanese bridge and strolled slowly through looking at all the plants. Amongst all the usual squills, bluebells and aubretia the tall white pasque flowers stood out with their ferny foliage and hairy leaves and petals. Why do I always see things I want in my garden when I walk through the parks? A red maple provided a splash of colourful foliage and beneath it shouting out ‘notice me!’ a pretty little lavender coloured cranesbill with veins of darkest purple. 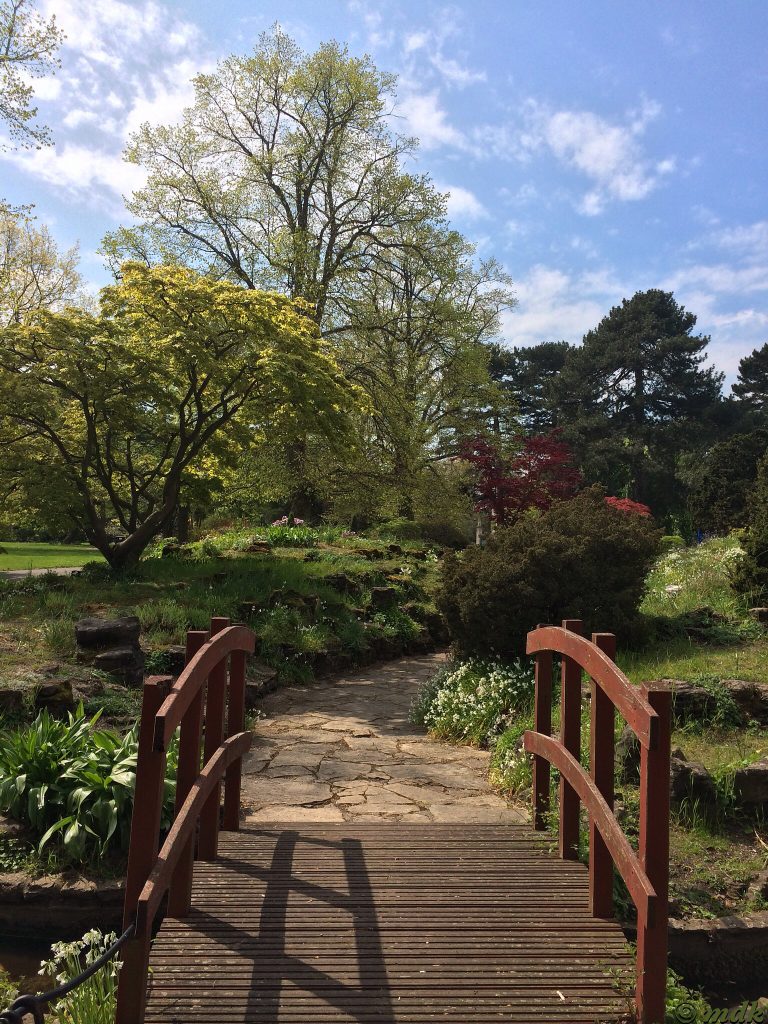 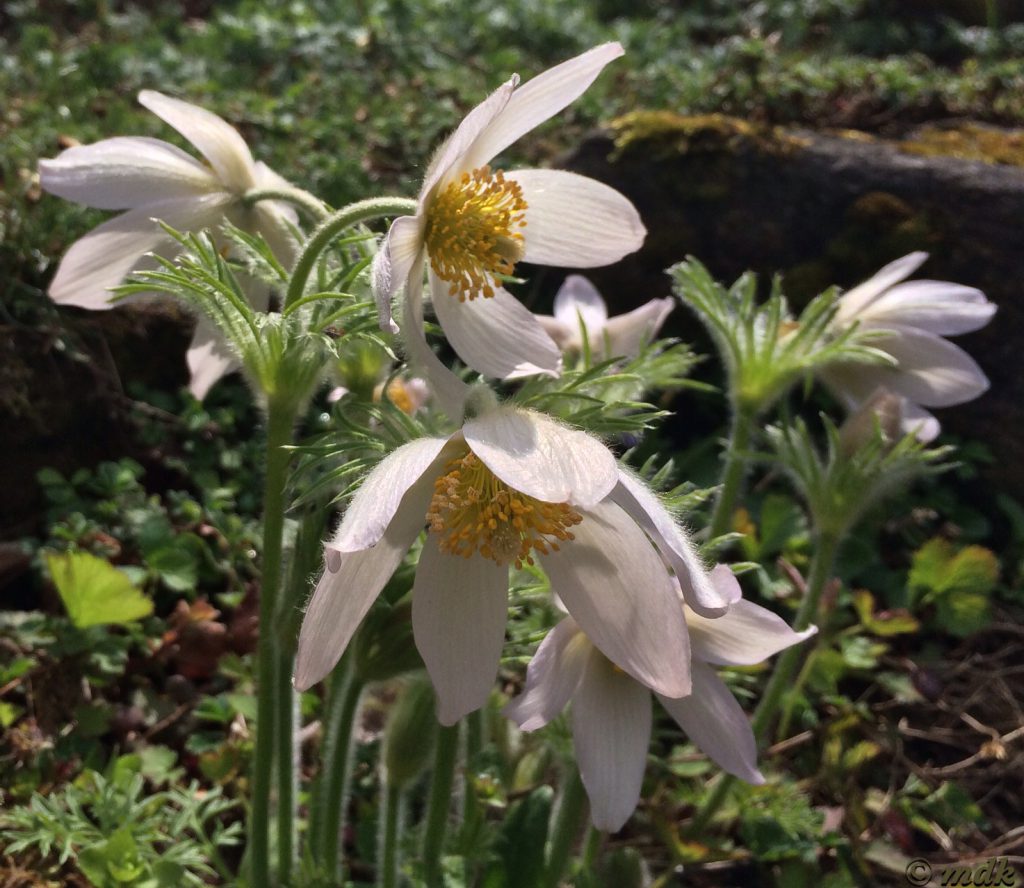 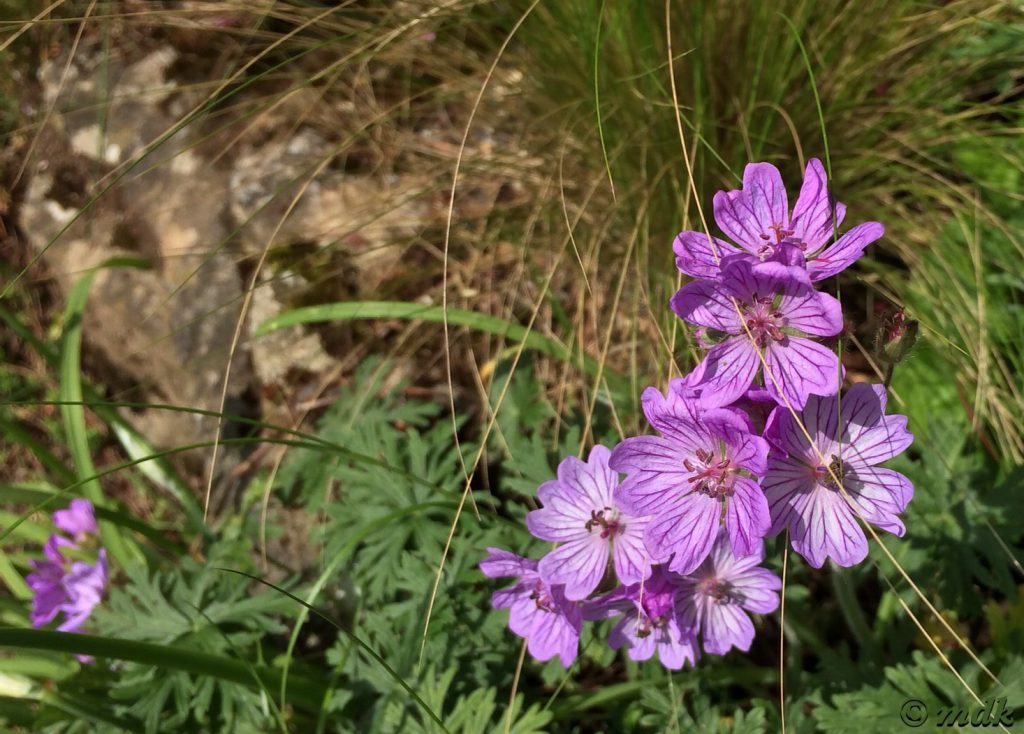 Across the second bridge is a pond filled with ornamental carp. At first I though I could see fish but, when I looked closer, it turned out to be dead leaves floating. Maybe it’s time for new glasses. Standing on the edge of the pond a duck was peering into the water too, do ducks eat fish I wonder? There are supposed to be frogs in the pond too so maybe he was looking for a tadpole snack. 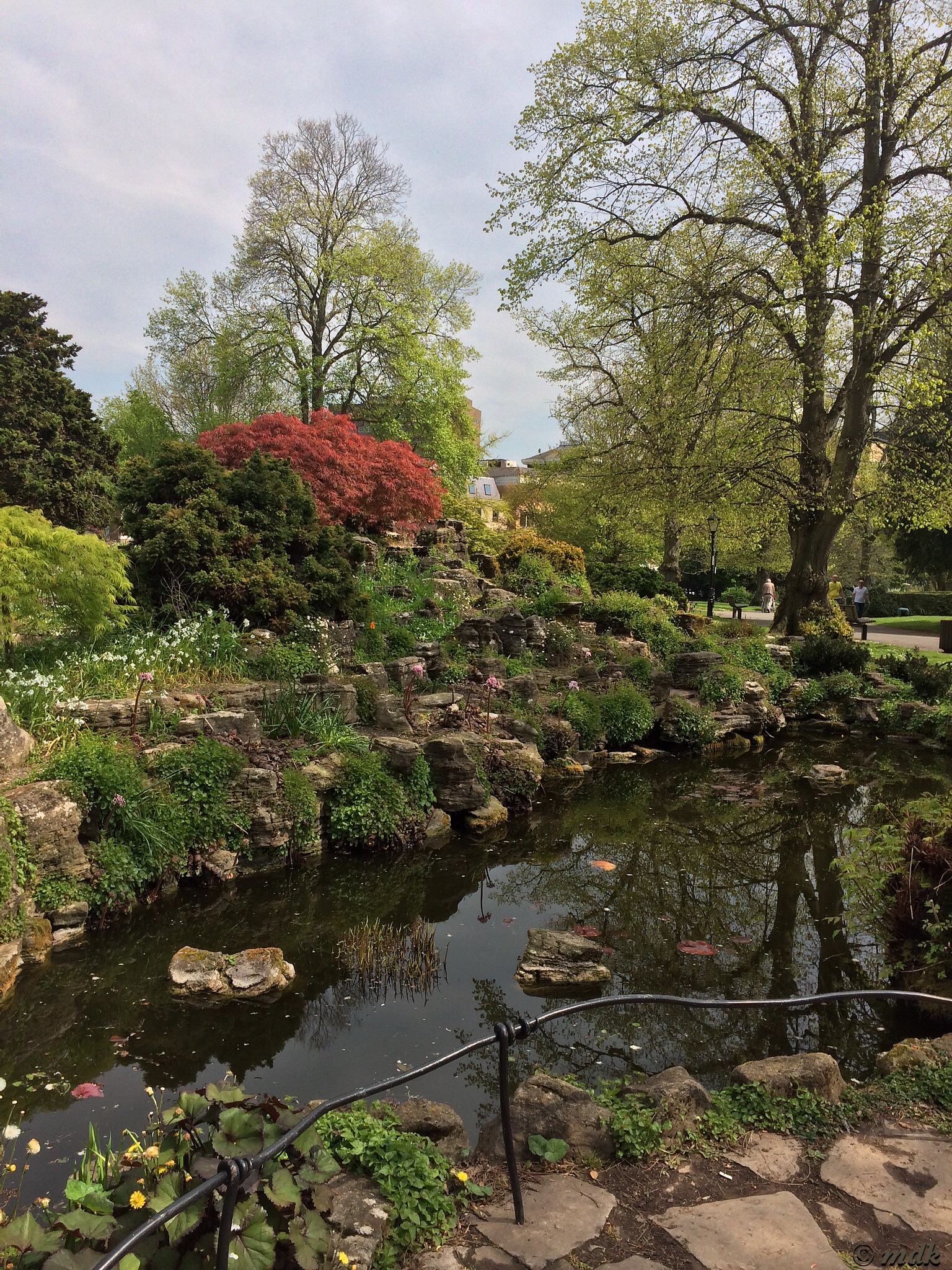 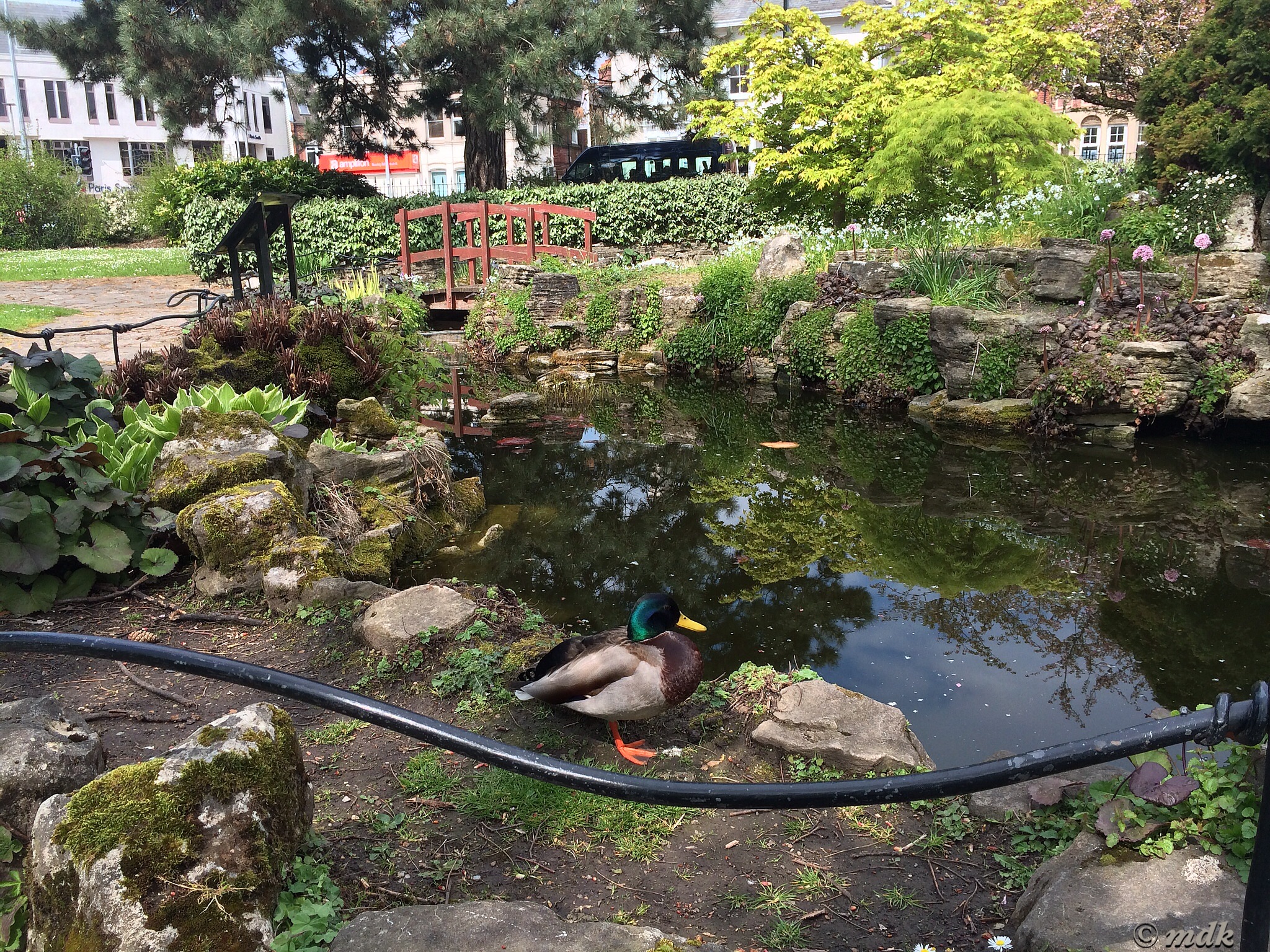 With a quick look across the road at the cenotaph I made for my main objective, the wisteria pergola. My morning walk to Dream Factory took me through the pergola every morning. Back then it was bordered by low flower beds and I loved watching the progression of the seasons as the planting changed. Sadly the beds have now gone but this was more than made up for by the wisteria. In a few weeks it will be glorious but the flowers are just beginning to open now and the smell as I walked through was glorious. Oh to have a garden big enough for a wisteria pergola! 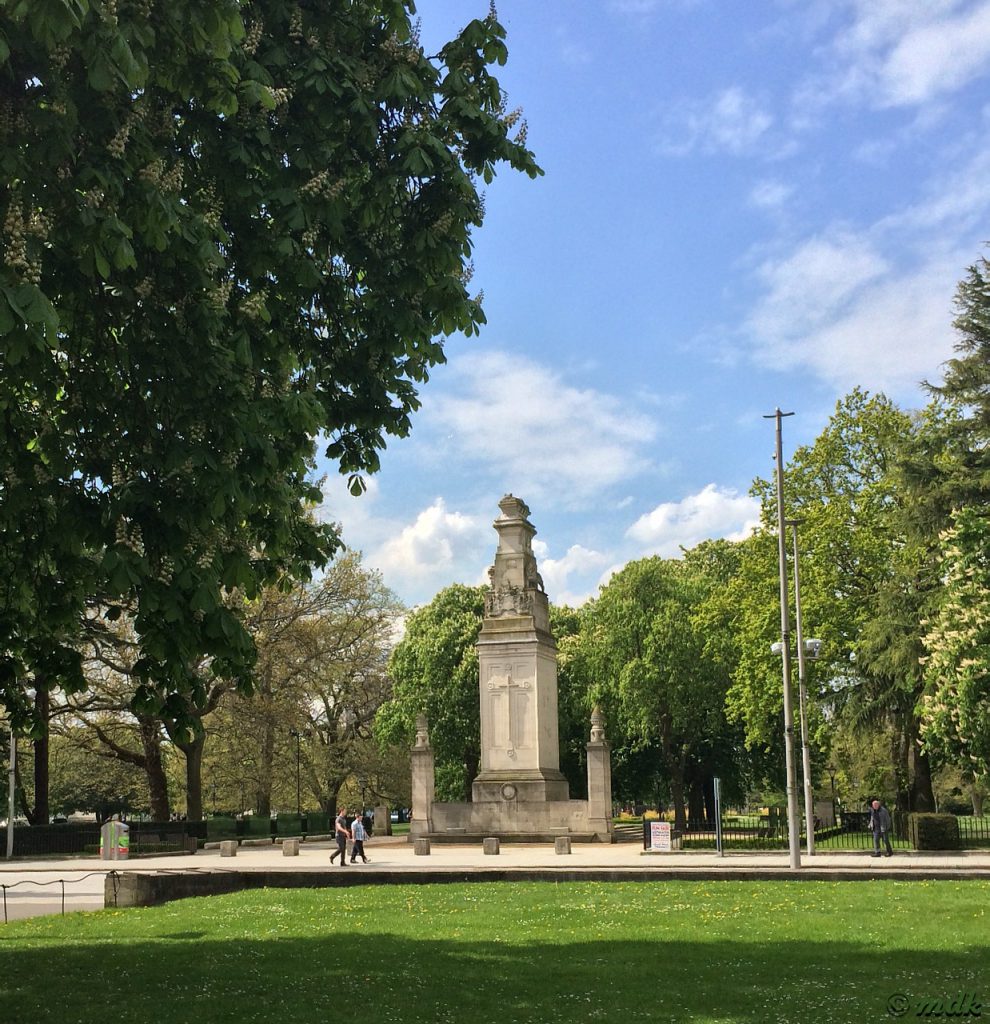 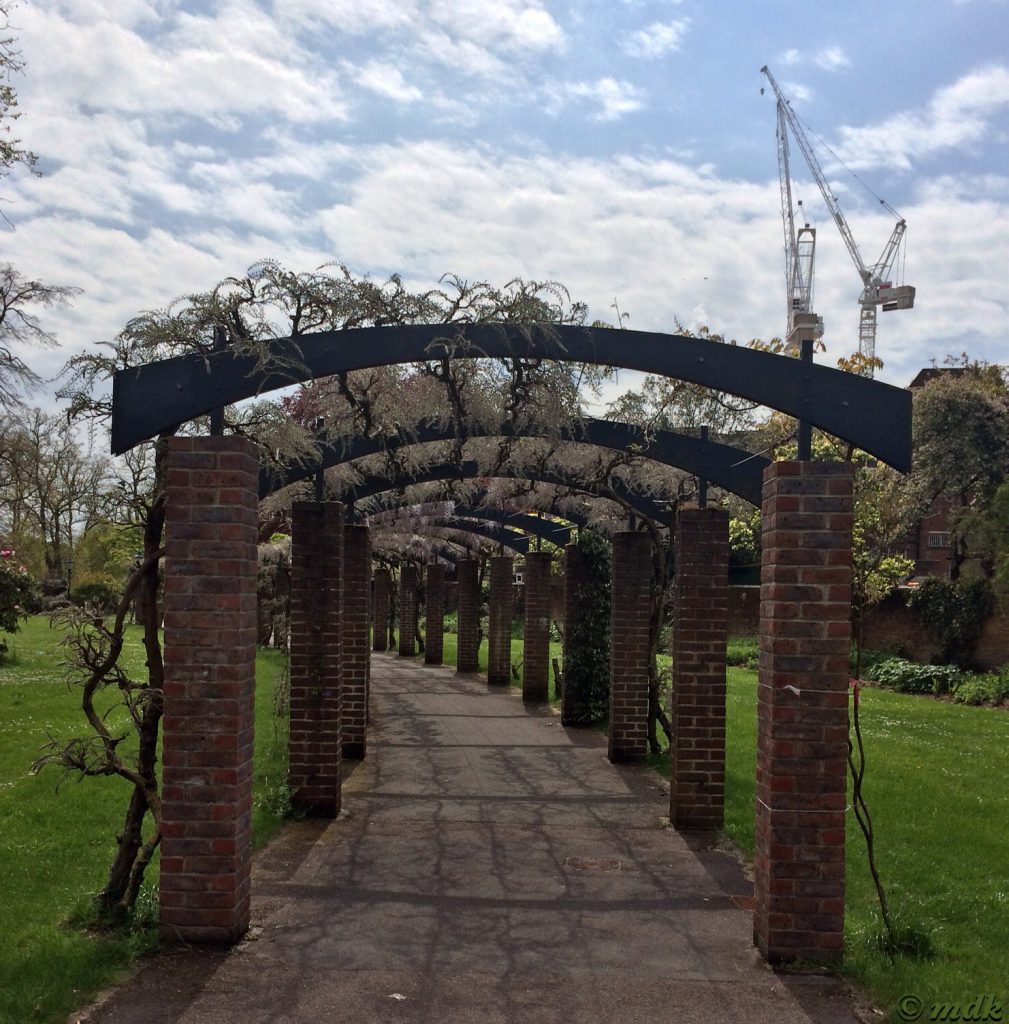 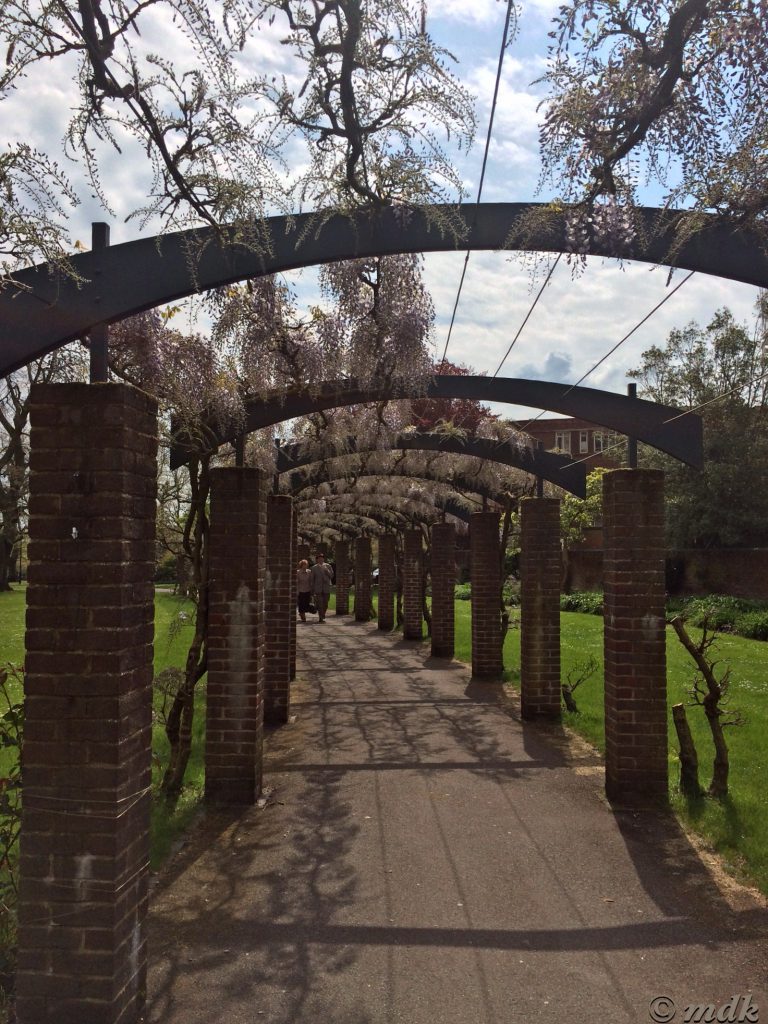 On my morning walks I usually had the pergola all to myself but today a succession of people were walking through so I snapped what I could, knowing I was shooting into the light so they wouldn’t be the best photos anyway. At the other end I stopped, waiting for a chance to get a photo with the light behind me. Two men came through and apologised for getting in my shot.
“We didn’t know this was here,” one said in a broad Scottish accent, “I can’t believe you have these parks right in the centre of the city next to all the shops.”
“You can walk right down to the bottom of the High Street through the parks,” I told them, “are you here on one of the ships?”
“No, we’re flying back to Glasgow tonight but I’m glad we found these parks.”
I wished them a nice day, took my photo and carried on down the avenue of trees to the next park. 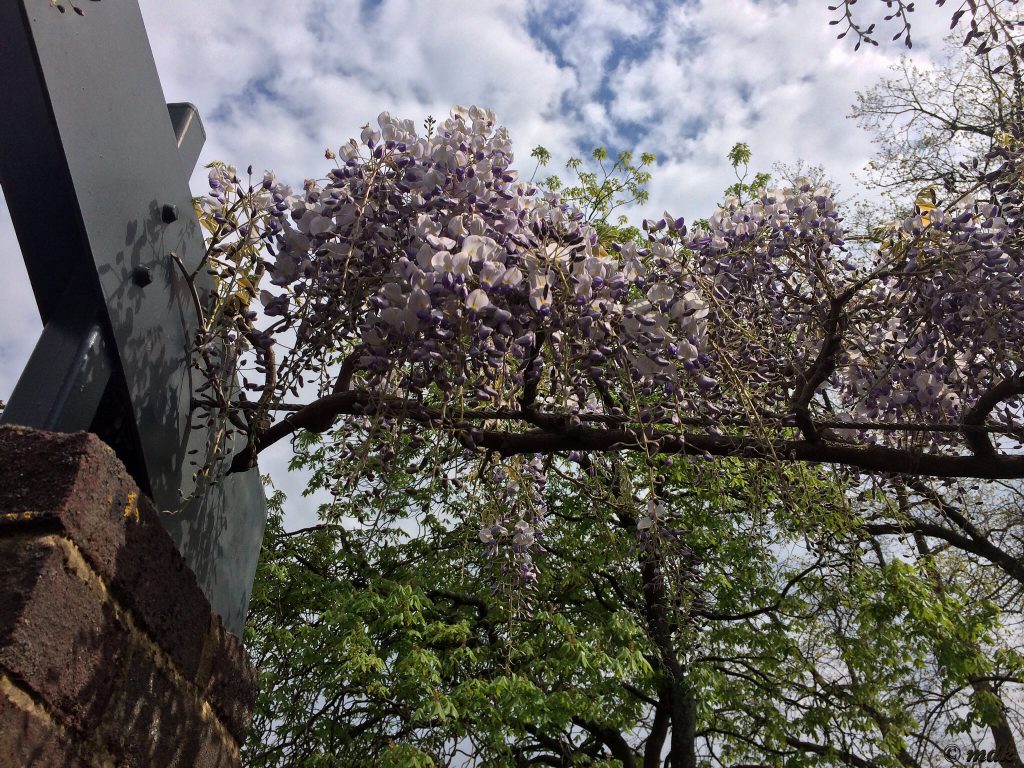 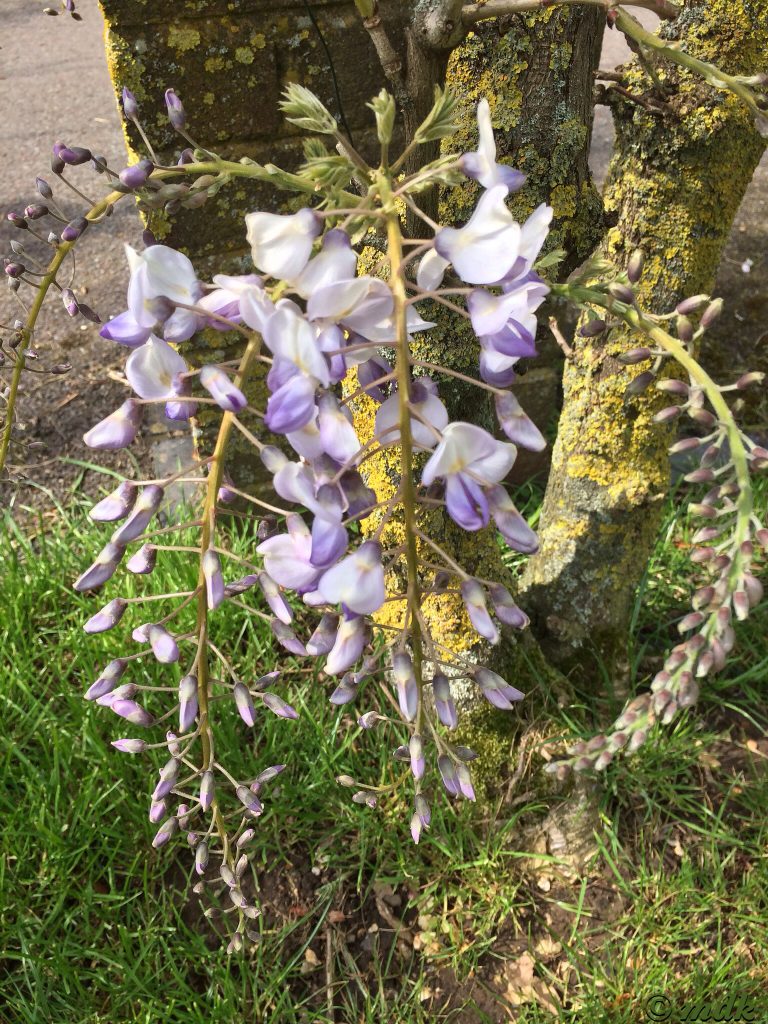 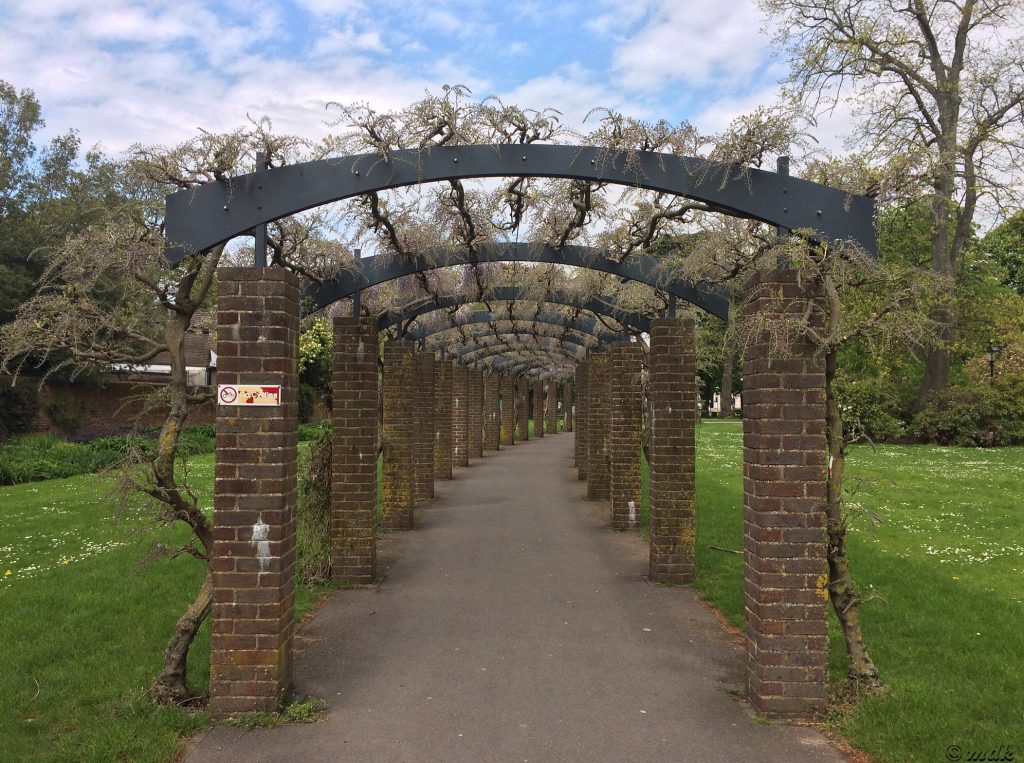 My next objective was the Enchanted Park but that will have to wait until later. I have to warn you though, there will be rather a lot of photos of flowers and a skinny latte…