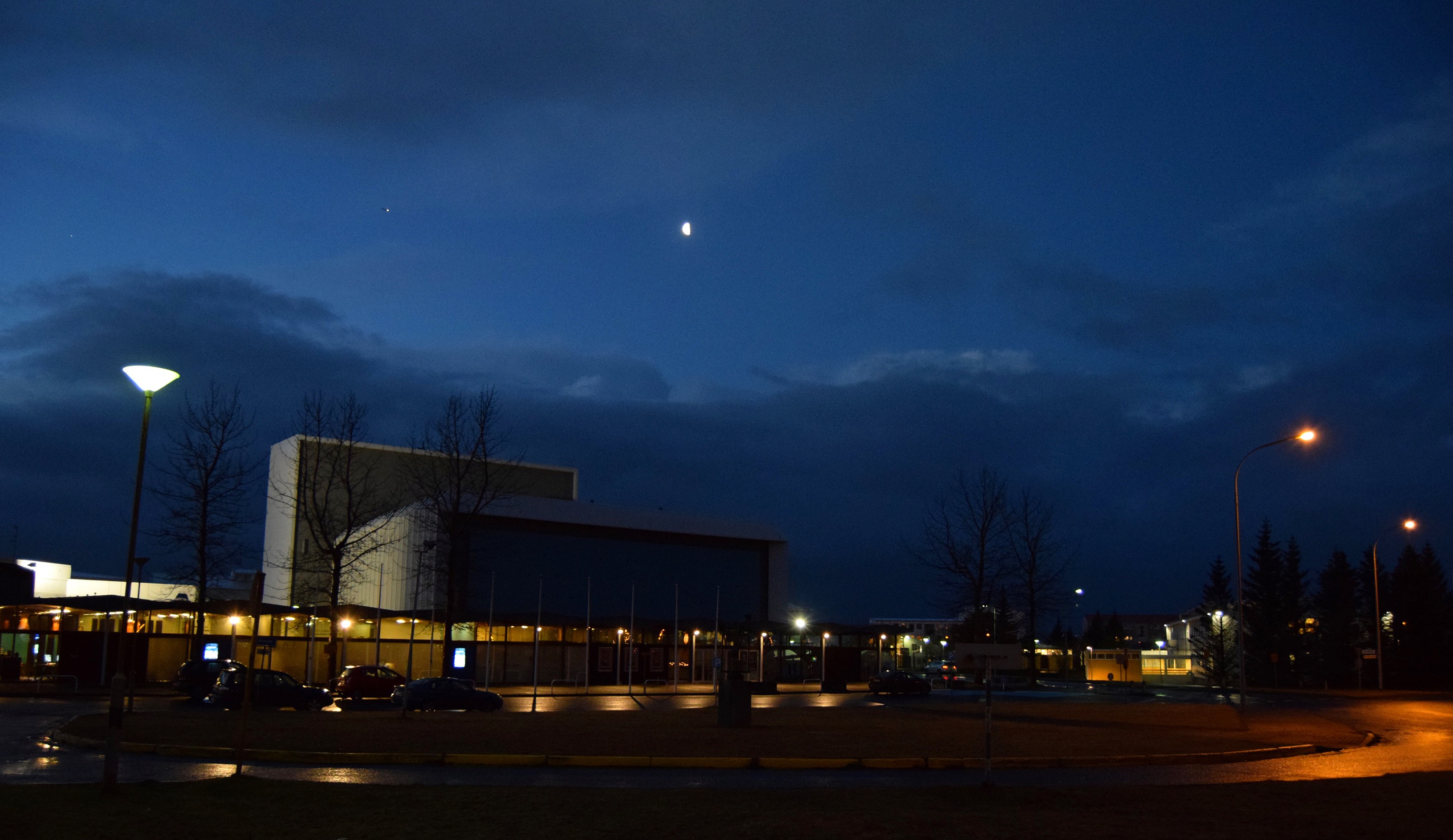 Iceland, the most sparsely populated country in Europe, is often dubbed the land of the midnight sun because, during the summer, the sun barely sets. In winter of course, it’s a different story. Sunlight is a rare and fleeting thing. Even after a slightly disconcerting shower in sulphurous water, a leisurely breakfast and a great deal of Google Map exploring, it was still as dark as midnight when we left the hotel just after eleven this morning and the moon was the brightest thing in the sky.

The snow, that had been settling in a most satisfying way last night, had largely disappeared, meaning the Yaktrax stayed in my pocket rather than on my feet. A little still remained on the roundabout in front of the hotel and, along with the brightly lit tree, provided a very Christmassy scene, albeit momentary. Any disappointment we might have felt at the melting snow was more than made up for by the patches of clear sky overhead. If the sky stayed clear we might just have a chance of seeing the aurora borealis tonight on our boat trip. 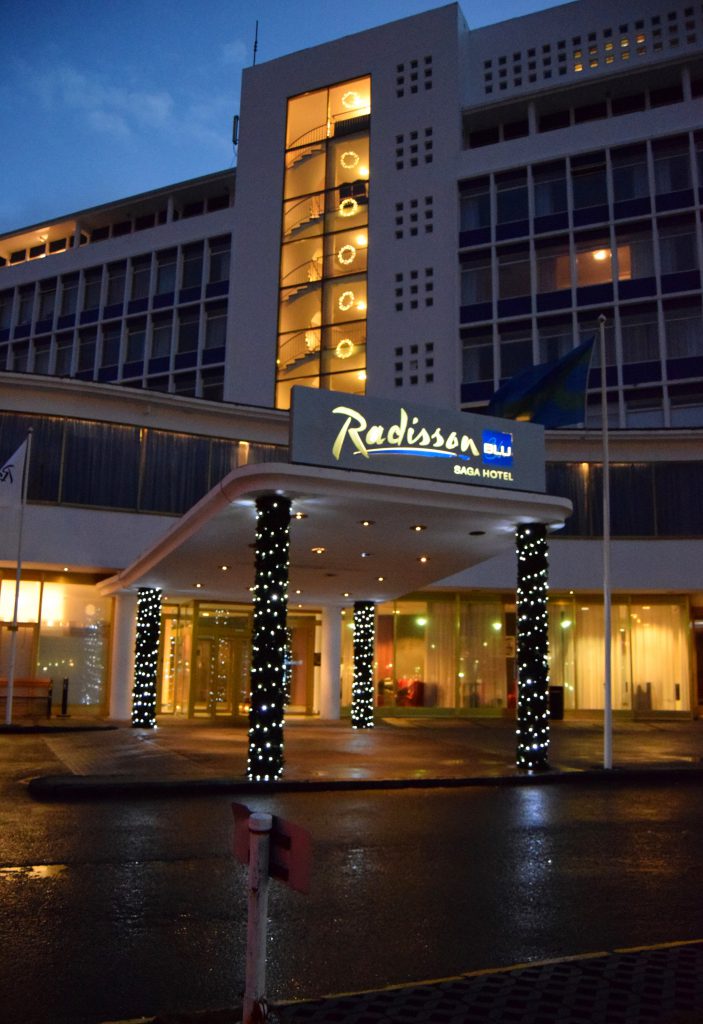 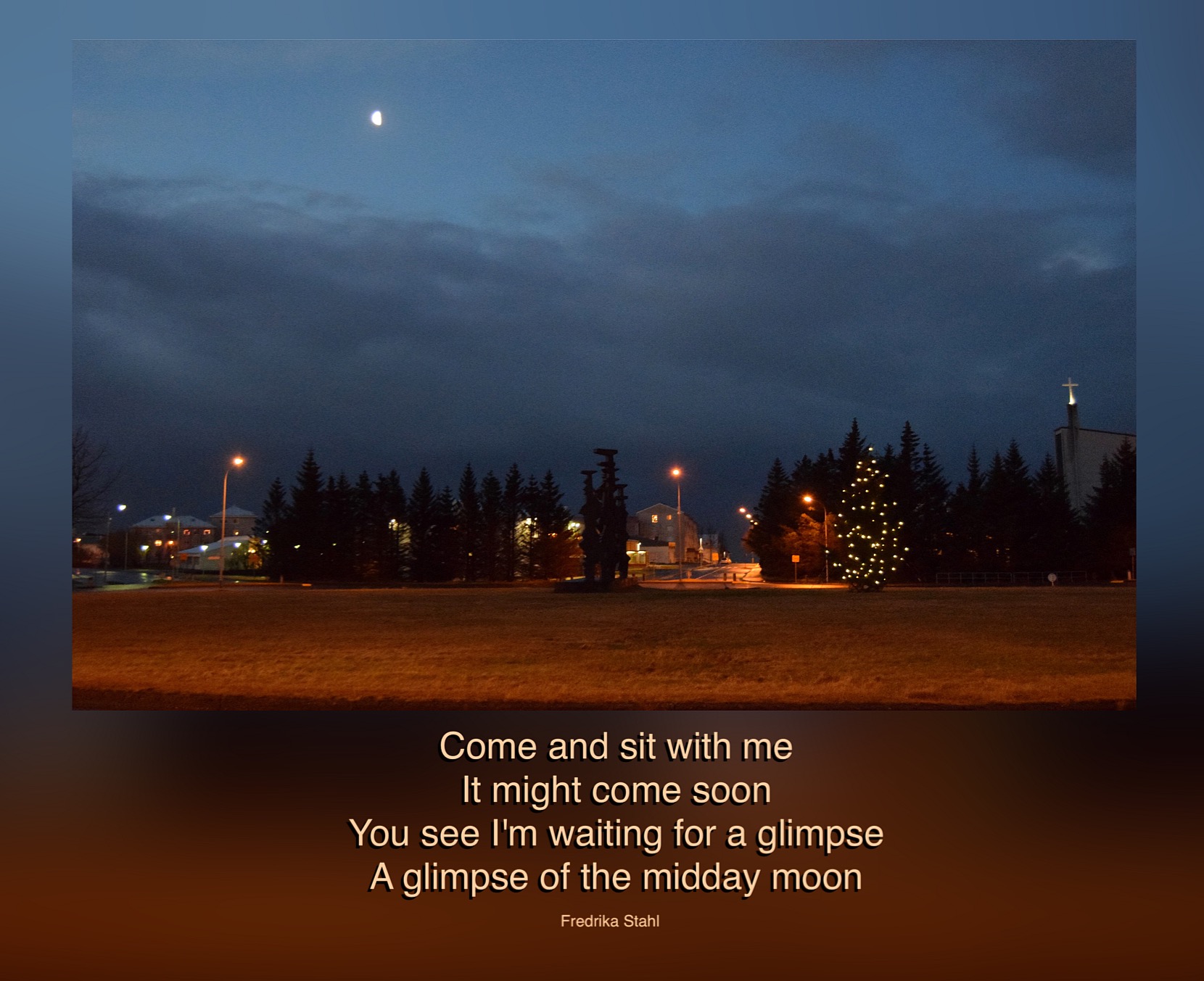 In spite of all the earlier looking at maps, our plans for the morning were vague to say the least and the darkness added a surreal feel to our wanderings. Light spilled out from the colourful little houses we passed. Many were clad with wood or corrugated iron painted in bright colours, perhaps to combat the long dark winter days. On the larger roads there was some traffic and people were going about their normal Tuesday morning business but the lack of light made it feel like early evening rather than morning and there was none of the hustle and bustle we’d expected, no large shopping centres or tall buildings. 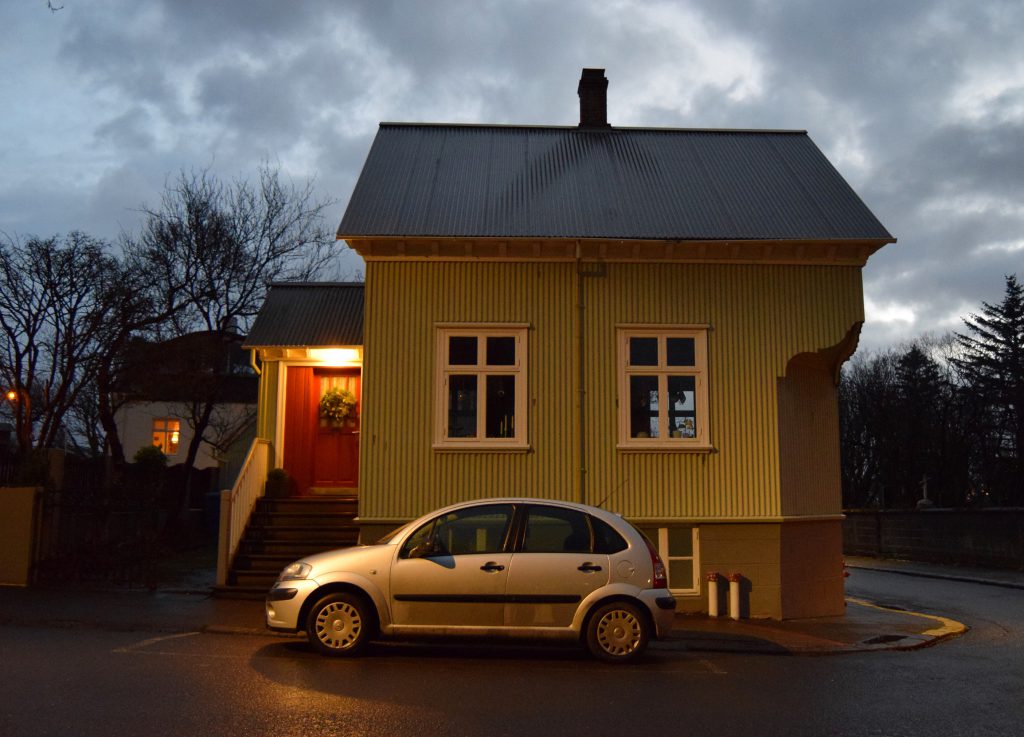 Reykjavik is Iceland’s largest city and the northernmost capital of a sovereign state in the world but it still has a village feel about it. It is also a relatively young city. Until the eighteenth century the area was mostly farmland. Urbanisation began in 1752 when King Frederick V of Denmark donated the land to the Innréttingar Corporation and the leader, Skúli Magnússon, built several houses. Over the next few decades the wool industry prospered in the little community along with fisheries, sulphur mining, shipbuilding and, of course, agriculture. In 1786 Denmark abolished monopoly trading and granted six communities, including Reykjavik, an exclusive trading charter. This is regarded as the date of the city’s founding. 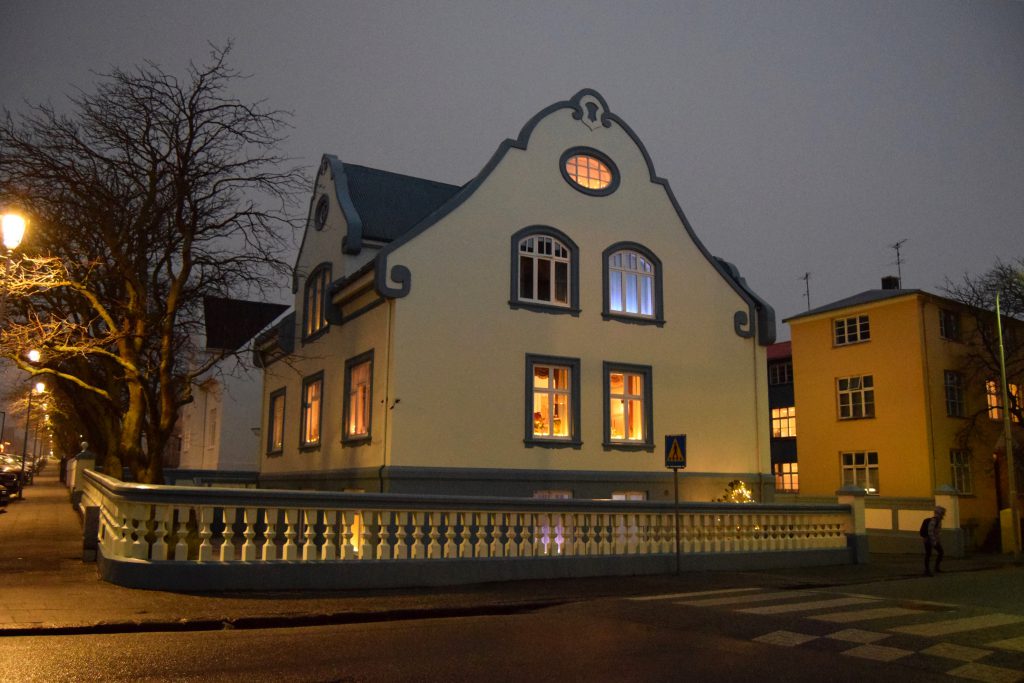 Somehow, more by luck than design, we found ourselves at the Old Harbour. Originally most trading ships had to drop anchor at sea and ferry goods to shore by row boat. Then, between 1913 and 1917, the harbour was built, the first large construction project in the country. These days the majority of port activity has moved east to Sundahöfn port. On the foreshore a sculpture of two fishermen dressed in oilskins stand looking out to sea. Called Horft Til Hafs or facing the sea, by Ingi Th. Gíslason, it was unveiled in 1997 and is a reminder of the fishermen who helped turn Reykjavok from a small town into a city. 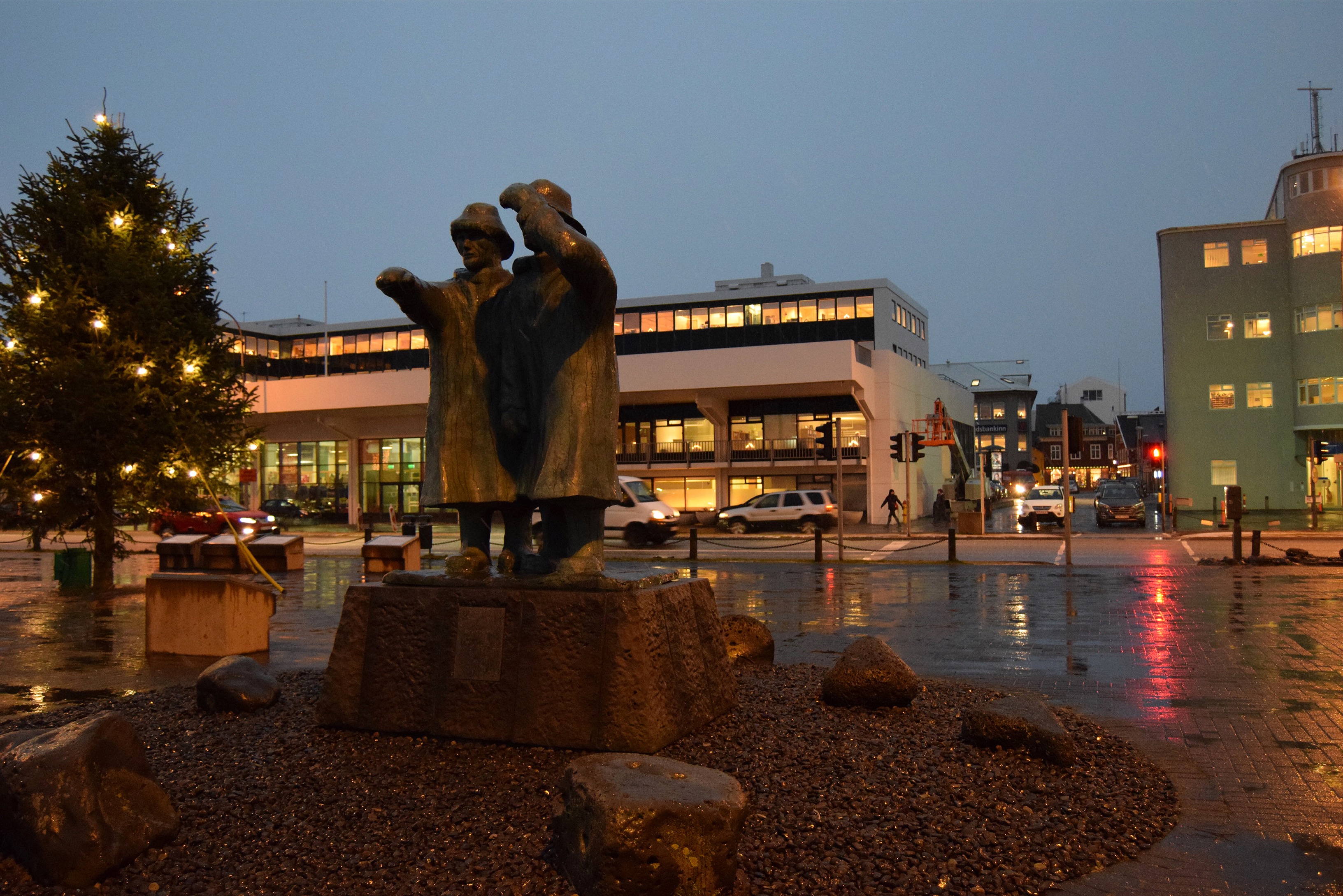 We strolled through the gloom past old fishing huts that have now been turned into restaurants, coffee and souvenir shops. Lights twinkled everywhere, making full use of the renewable energy Iceland has become famous for. Electricity here comes from either hydro or geothermal sources so I guess no one worries too much about the cost of all those lights. My favourites were Lobster and Stuff with its row of lights beneath the eves and the odd little Burgerjoint hut standing in the middle of the road with a Christmas tree on the roof like a beacon. 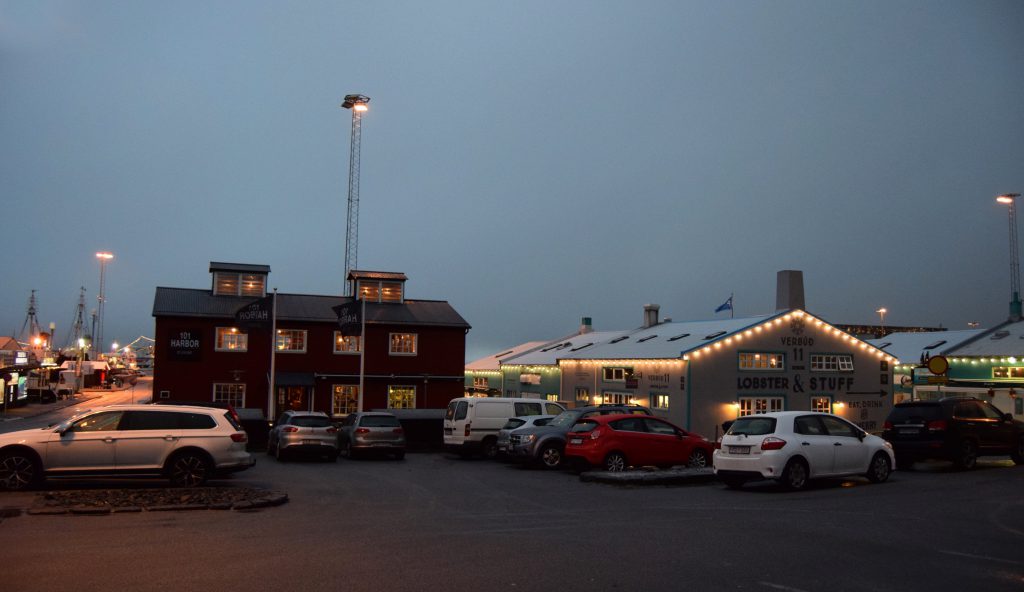 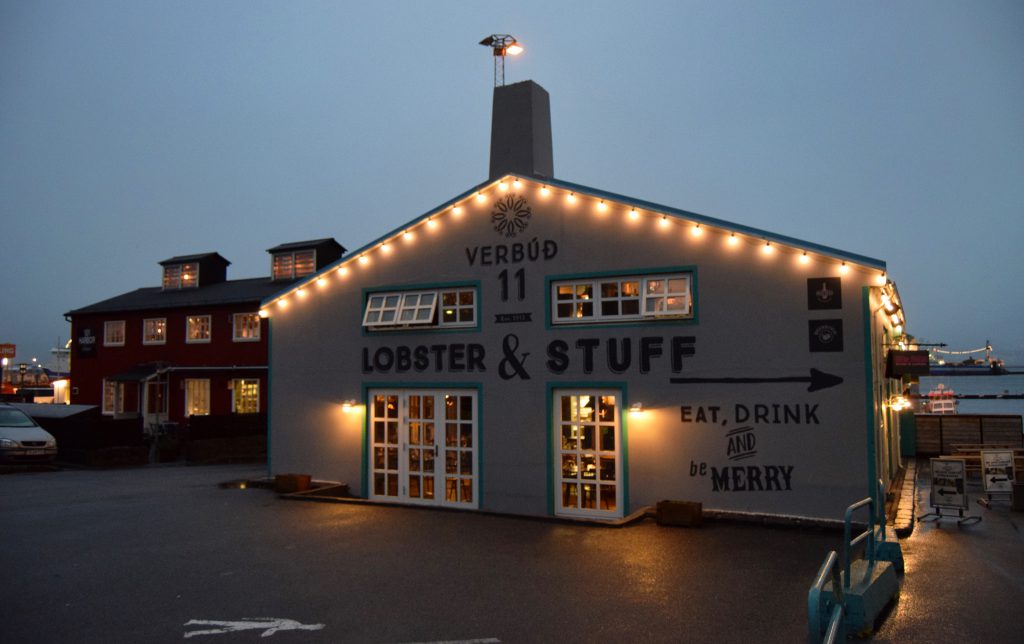 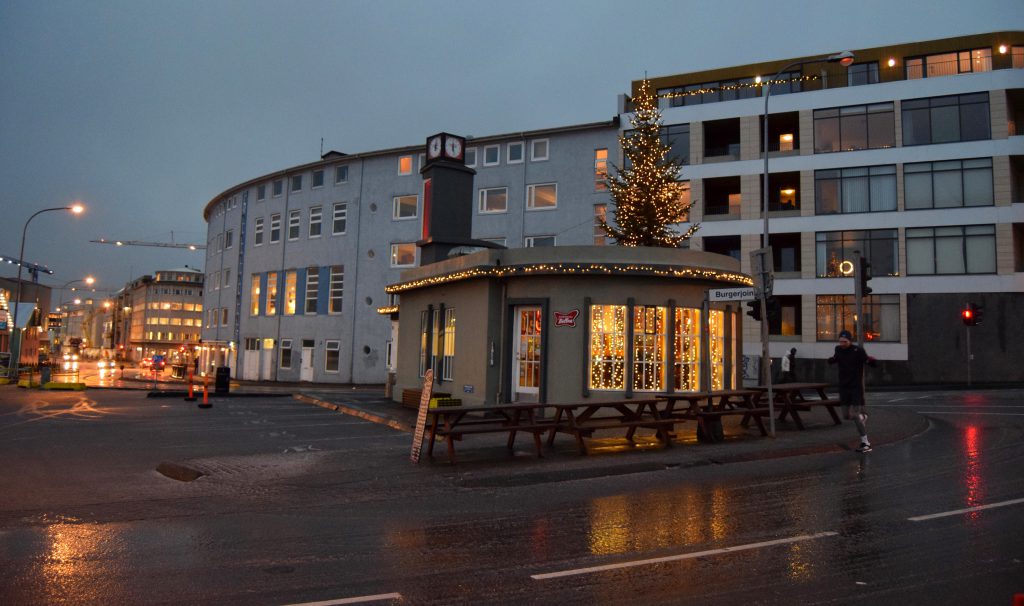 Then there were the ships, large and small. Little fishing boats, large trawlers and the huge grey coast guard ship which defends Iceland’s territorial fishing waters. Every inch of dock seemed to have a boat moored to it. The dark water was a mass of reflected light from the ships themselves and the strings of lights illuminating the walkways. 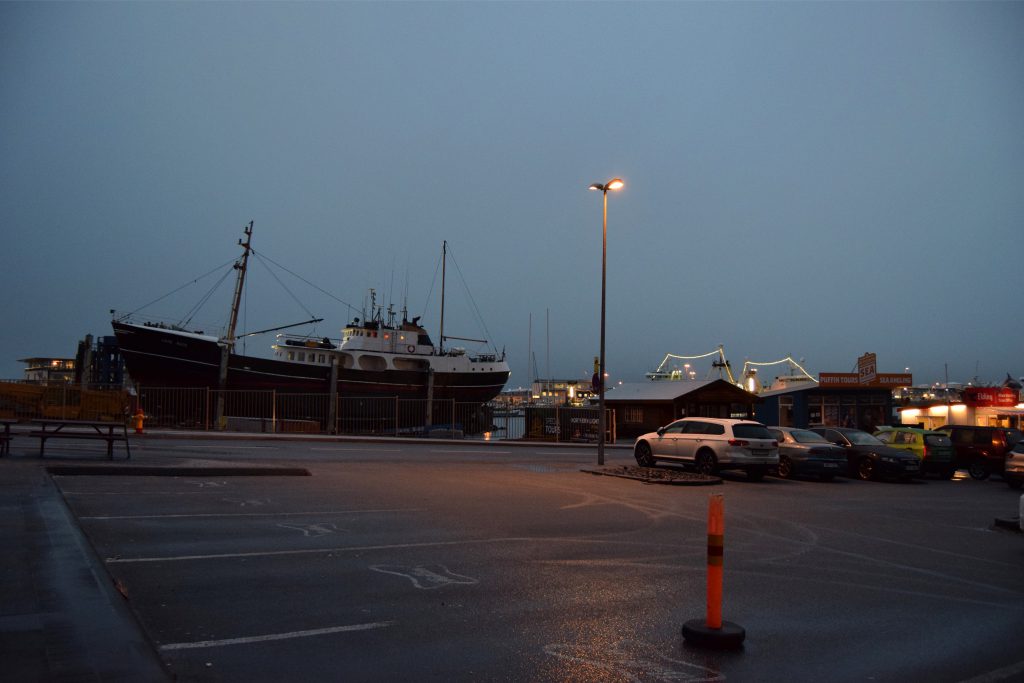 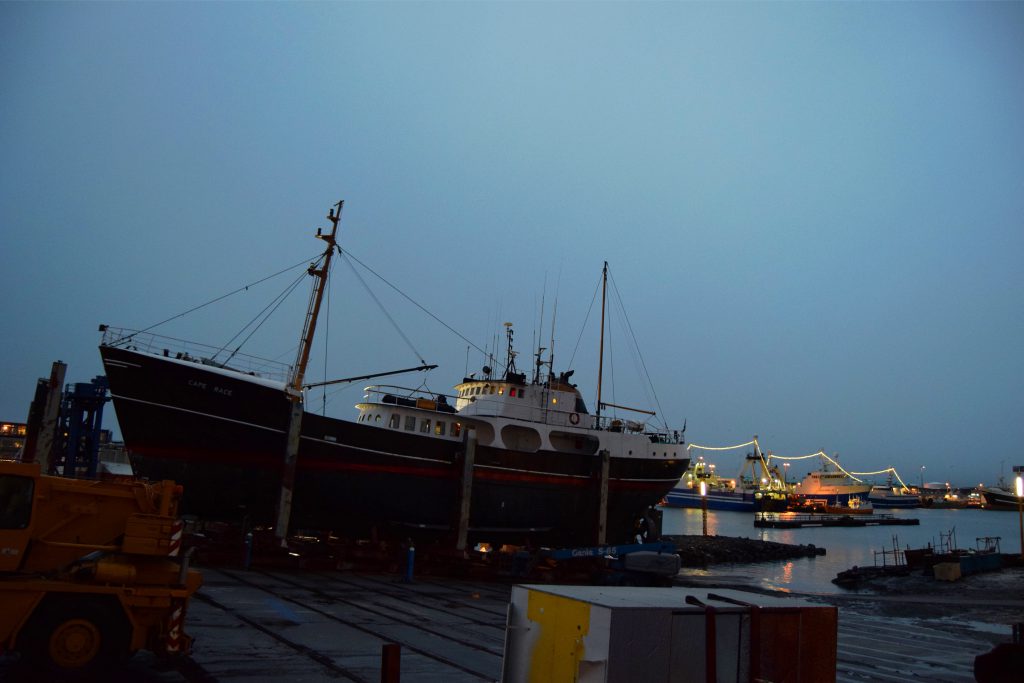 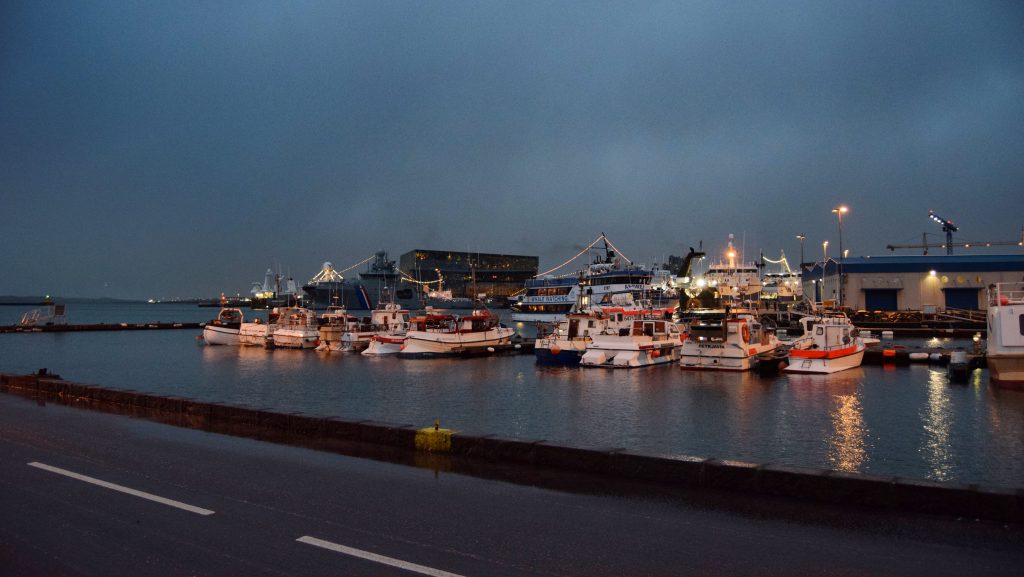 With our aurora watching trip in mind we walked along the eastern pier where huts housing the offices of the whale, bird and Aurora watching tours stand in line. We looked out at the tour boats and wondered which we would be on and, given the cloud that had rolled in since we set out, whether we’d actually see the aurora at all? Ironically, there were also huge whale hunting ships along the dock, almost side by side with the whale watching ships. 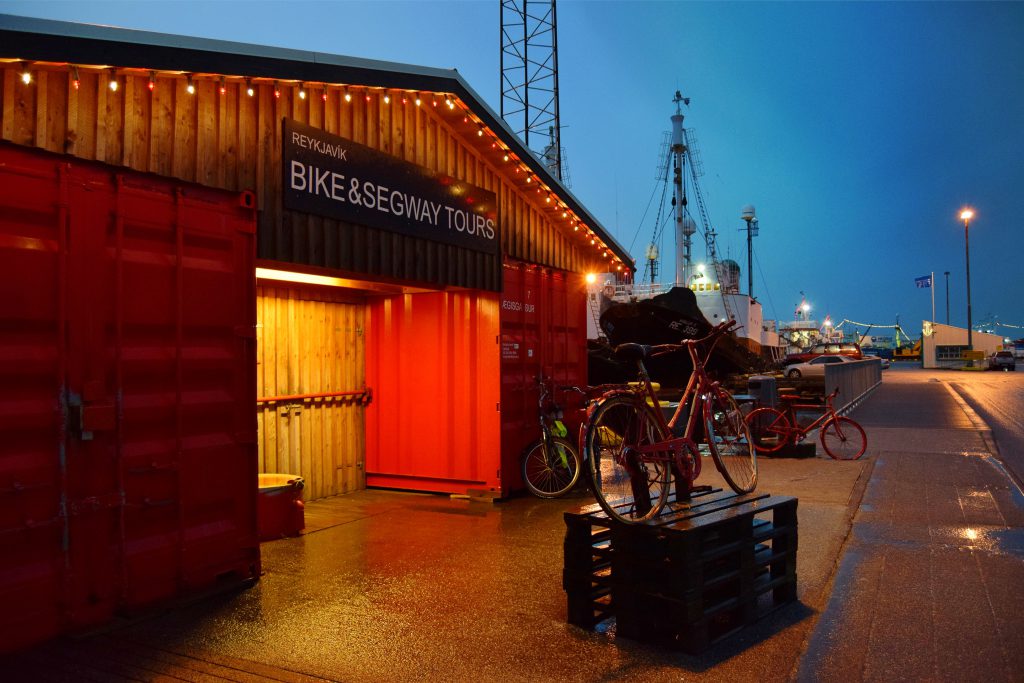 There are four remaining whalers in Reykjavik, each with a black hull and the word Hvalur on the bow and stern. Iceland is one of only three countries in the world still commercially whaling. From April to September these gigantic ships hunt the same minke whales the tourist boats are trying to watch. Of the whales caught, the fin whales are almost all exported to Japan while the minke whale meat is sold in Iceland. Most of the minke whales caught end up in the restaurants of Reykjavik, in fact minke whale burgers, along with puffin meat, was on the menu at our restaurant last night. Strangely the locals don’t eat much whale meat, the vast majority is consumed by tourists, perhaps the same ones who have been whale watching. 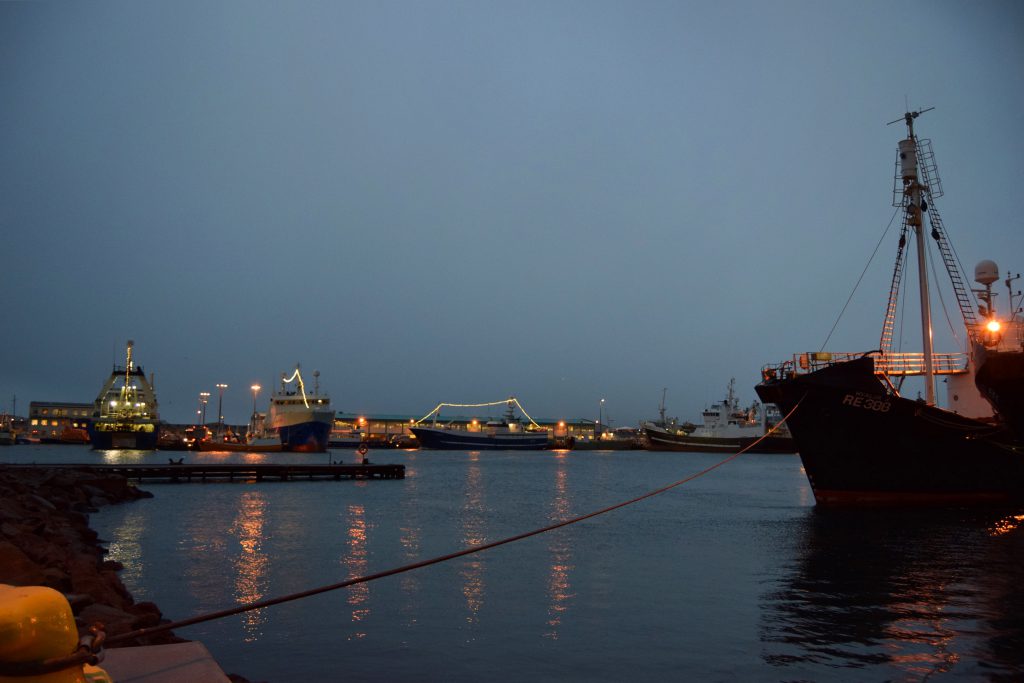 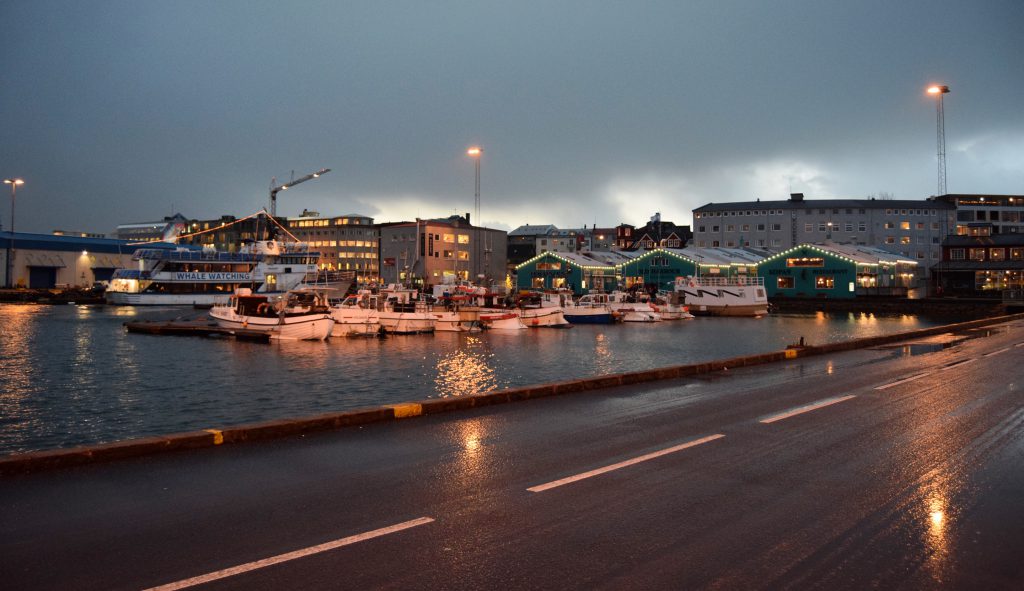 By this time it was almost midday and the sky was showing the faintest sign of lightening. As we made our way back to the road I couldn’t help stopping for a picture of a wonderfully decomposing hulk on the foreshore. Quite how it got there, so far from the sea, and why was a mystery but I loved the look of it. Behind the ship the misty cloud was slowly clearing, revealing snow capped mountains across the bay we hadn’t known were there. This, I later found out, was Mount Esja. It seemed strange that something as huge as a mountain could suddenly appear out of nowhere but such is the weather in Iceland. 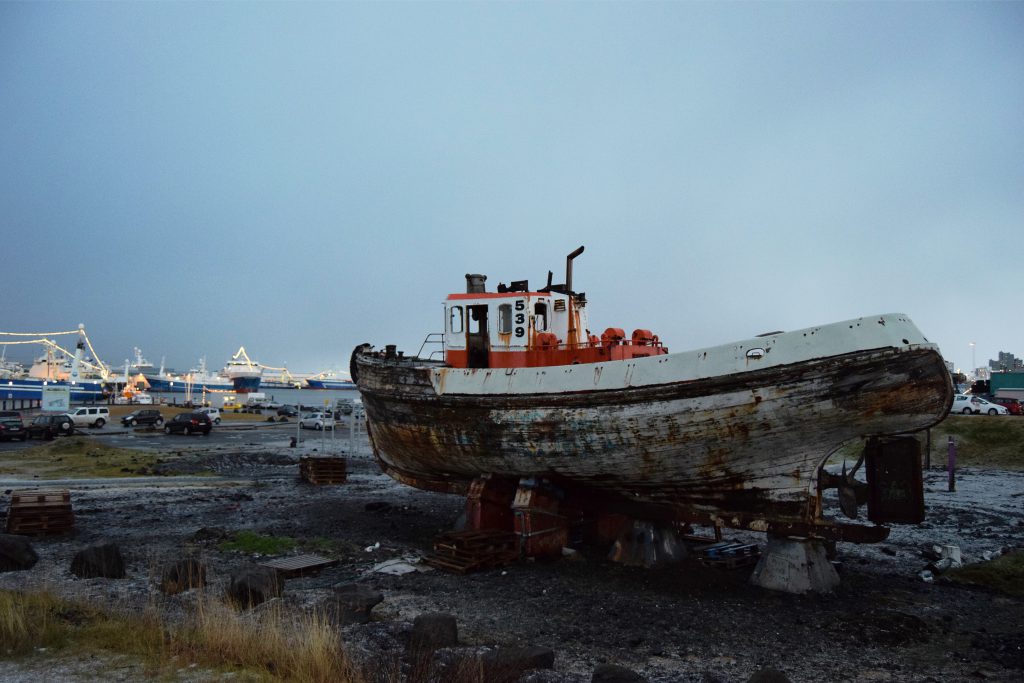 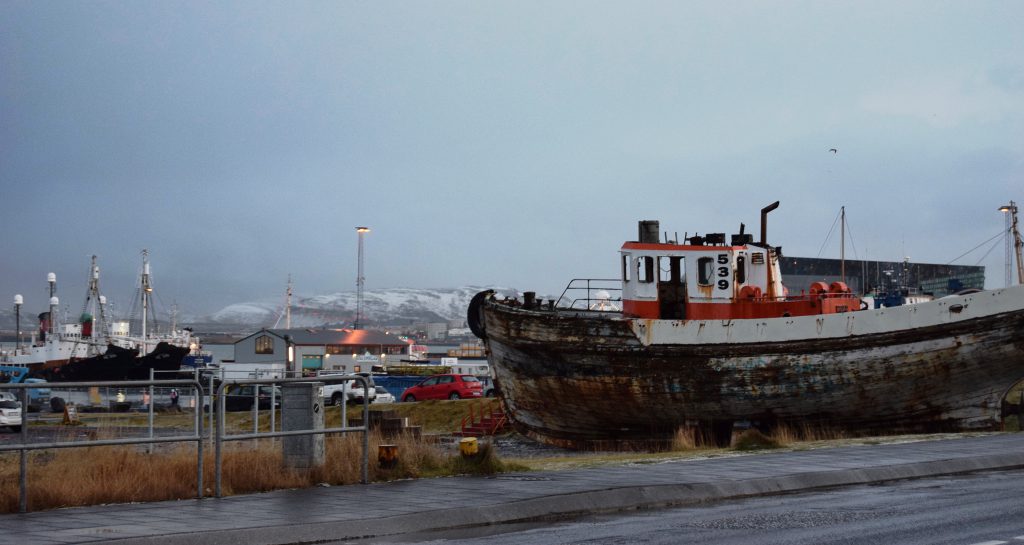 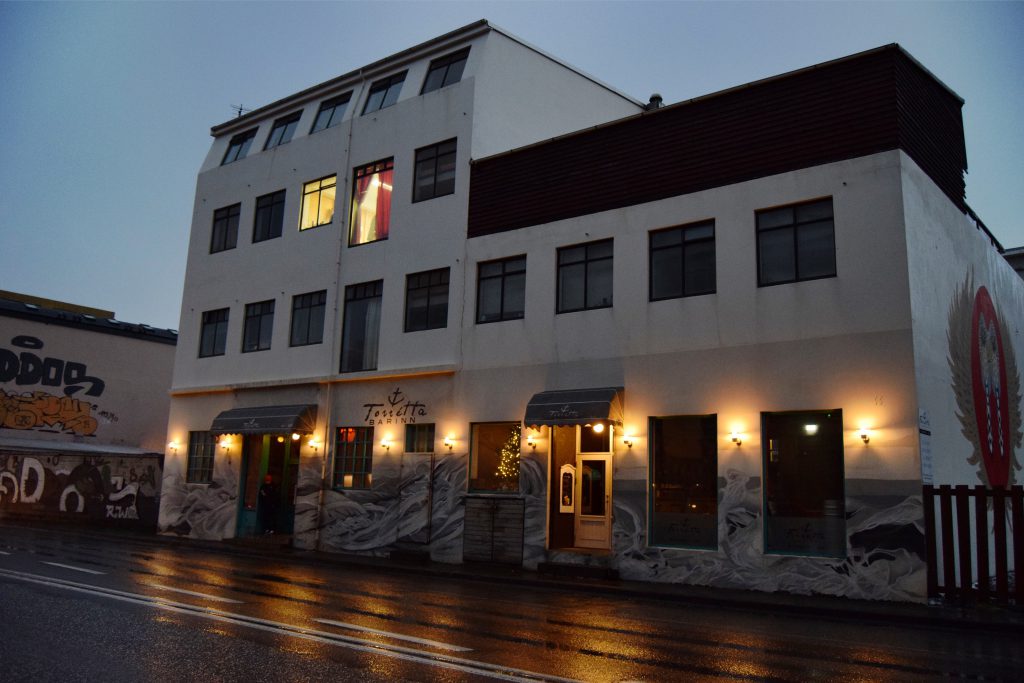 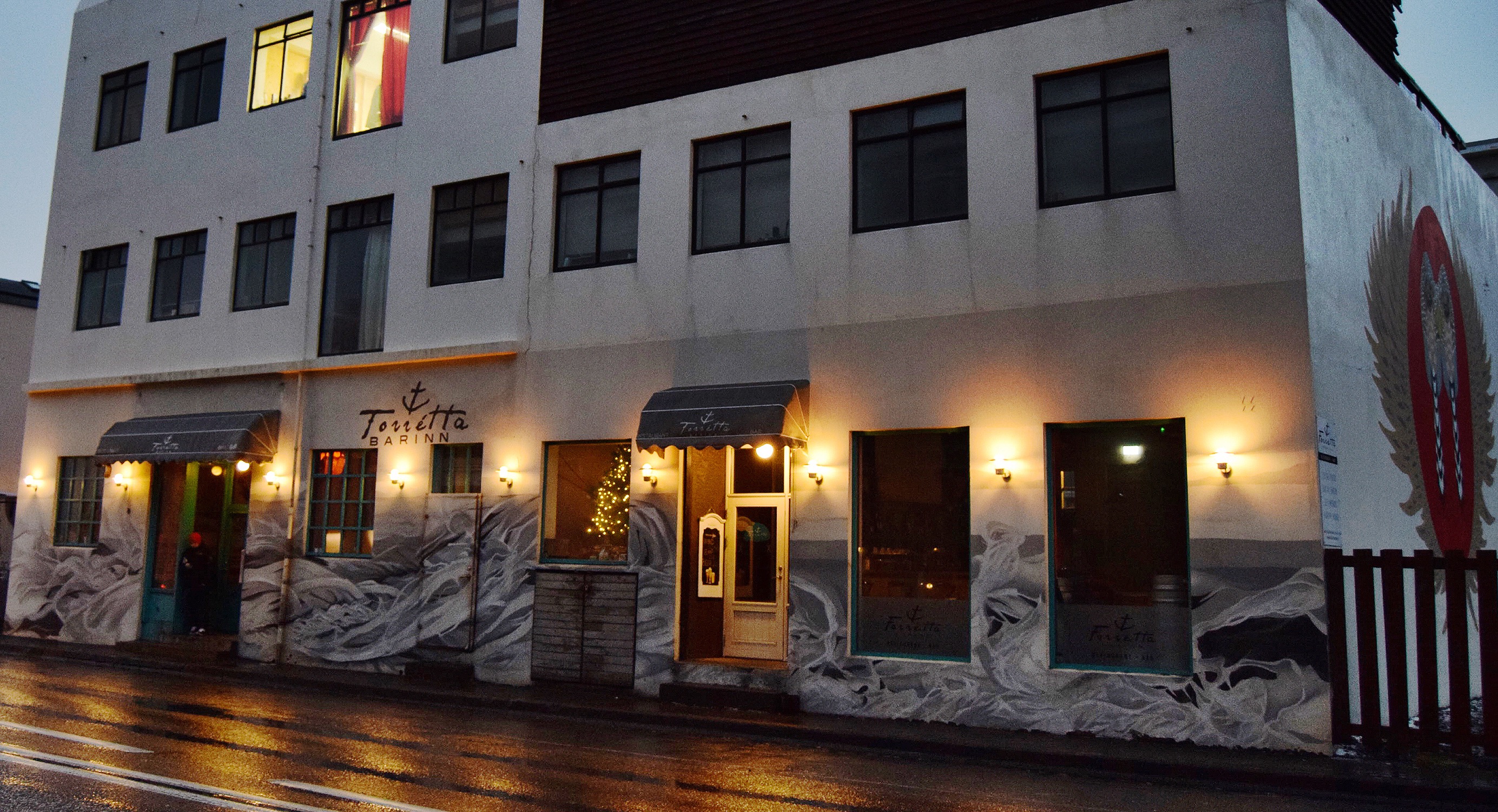 Another thing that seems to be everywhere is the Icelander’s love of Sagas, historical stories of the first Norse settlers along with a few trolls, elves and ghosts. Icelanders, it seems, firmly believe in these Huldufólk (hidden people) and will go to great lengths not to disturb or anger them. As we headed away from the sea we came to the Saga Museum where waxworks tell some of the most popular tales. Outside a large bronze Norseman on a horse seems to be guarding the place. 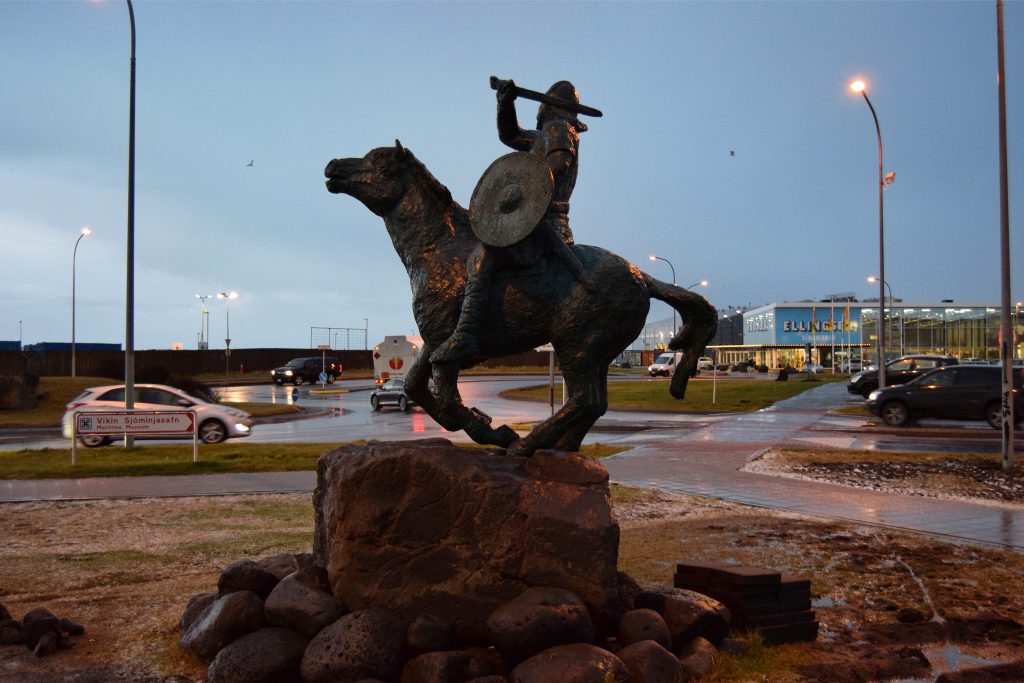 With such a short time to explore and so much to see we didn’t have time to visit the museum but I did stop to take a photo of the horseman and the running horse beside the door. Sadly, I couldn’t find out any more about him but I think he may represent Ingólfr Arnarson who, with his wife, Hallveig Frodesdatter, and brother, Chiorleif, was the first permanent Norse settler on the island back in 874 AD.

According to Landnámabók, the Icelandic Book of Settlement, Ingólfur came from Norway seeking a new place to live. When he saw the coastline of Iceland he threw his high seat pillars into the sea to decide where he would make his new home. This was the traditional Norse method for such things and where the pillars came to shore would be where he settled. Reykjavík was that place and Ingólfur was the founder of the city. 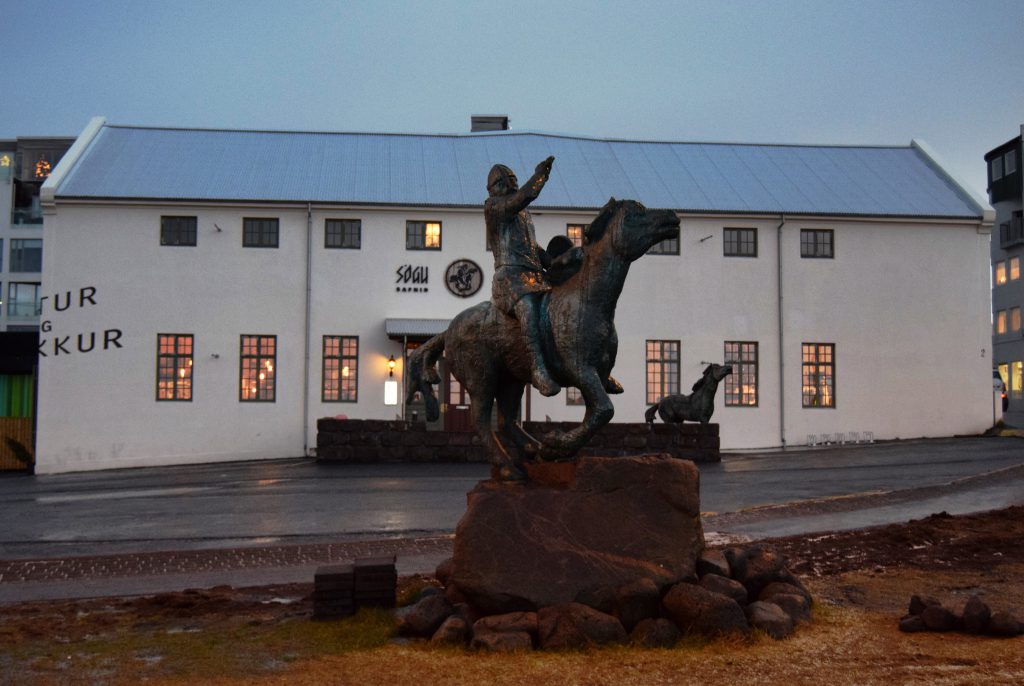 Directly opposite the museum was one of the most impressive pieces of graffiti I have ever seen. The whole side of the two buildings flanking the roundabout were covered with huge black and white portraits. Of course I had to go and have a closer look despite a fairly busy road to cross. Crossing roads in foreign cities is often fraught with problems, the rules vary and traffic isn’t always coming from the expected direction. So far we’d been lucky enough to be faced with either quiet roads or ones with crossings. This was the first difficult crossing we’d attempted. It turned out to be far easier than anticipated. As soon as we approached the road the cars stopped to let us cross. It seems pedestrians have right of way here. How very civilised. 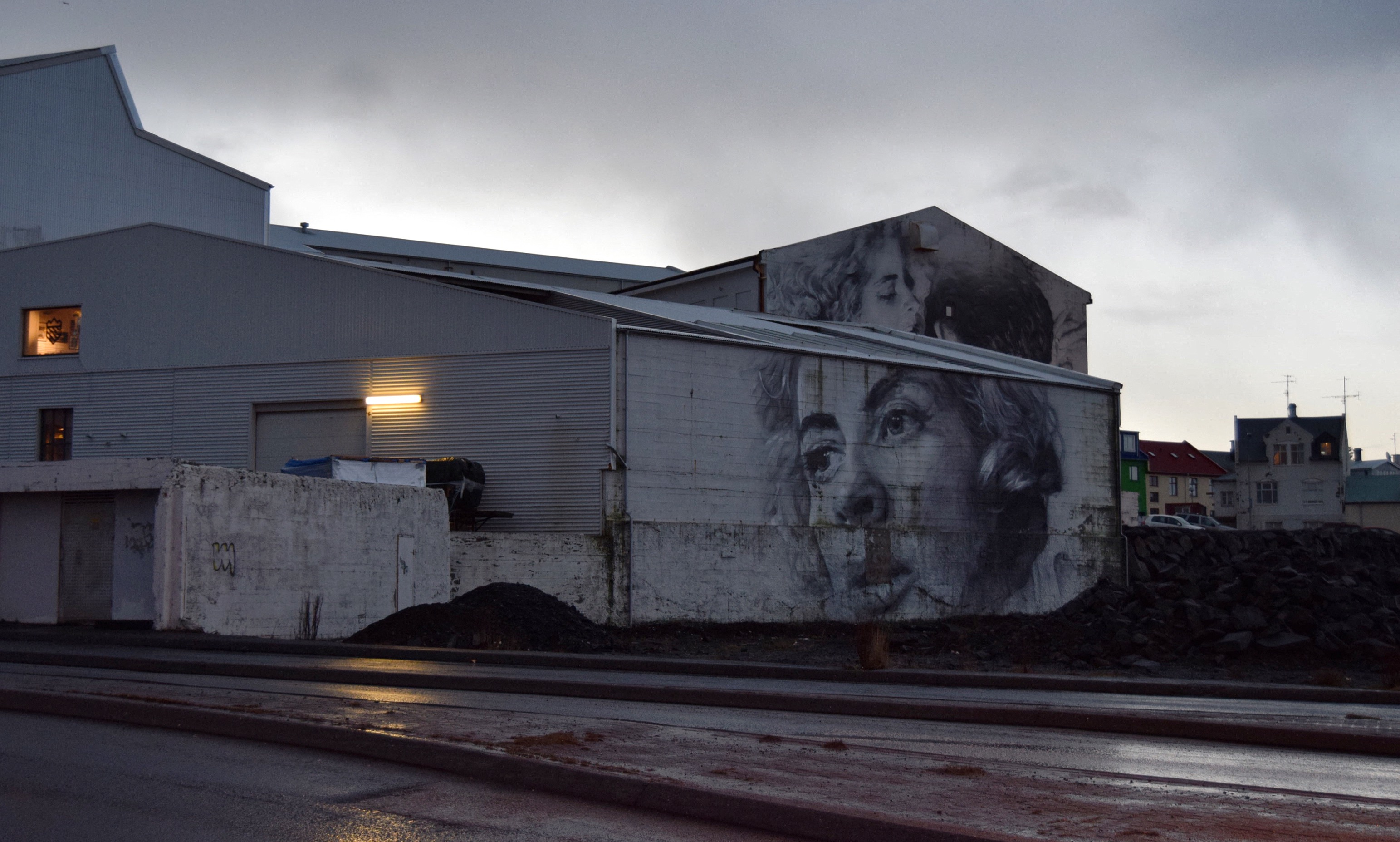 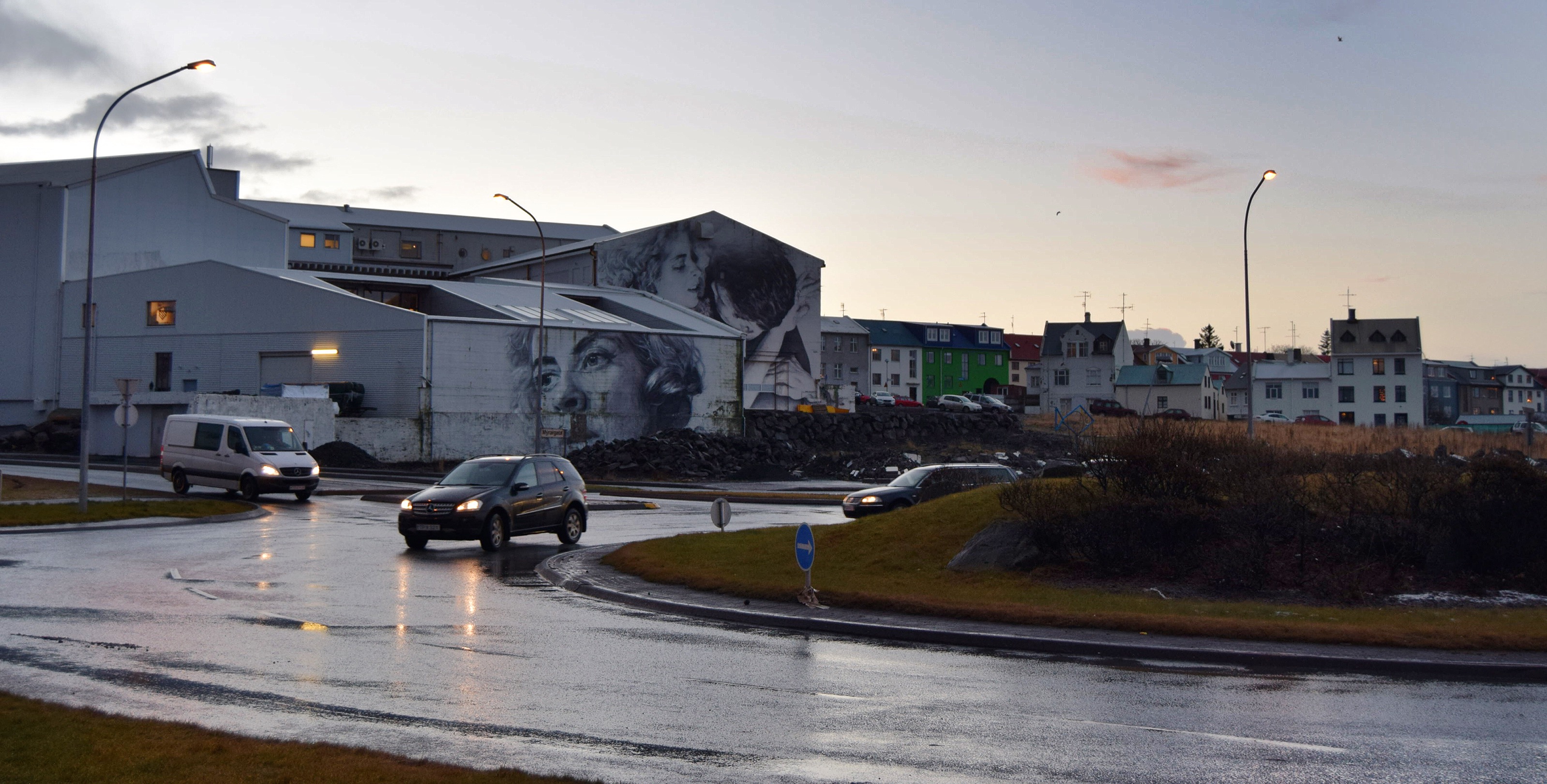 The murals were even better on closer inspection although we couldn’t get right up to them because they were behind a mass of rubble, maybe the remains of a demolished building? The faces were hauntingly beautiful and I couldn’t help wondering if they depicted a real person and what the story behind them was. Later I discovered they were the work of Australian artist Guido van Helten and were commissioned by the owner of the buildings. They are based on photos from a 1961 production of Jean-Paul Sartre’s play No Exit found by van Helten in the Reykjavik Musuem of Photography. The woman is actress Helga Löve and, while they were being painted, her daughter passed by and introduced herself to the artist. More of van Helten’s work and the full story behind these wonderful pieces can be found here. 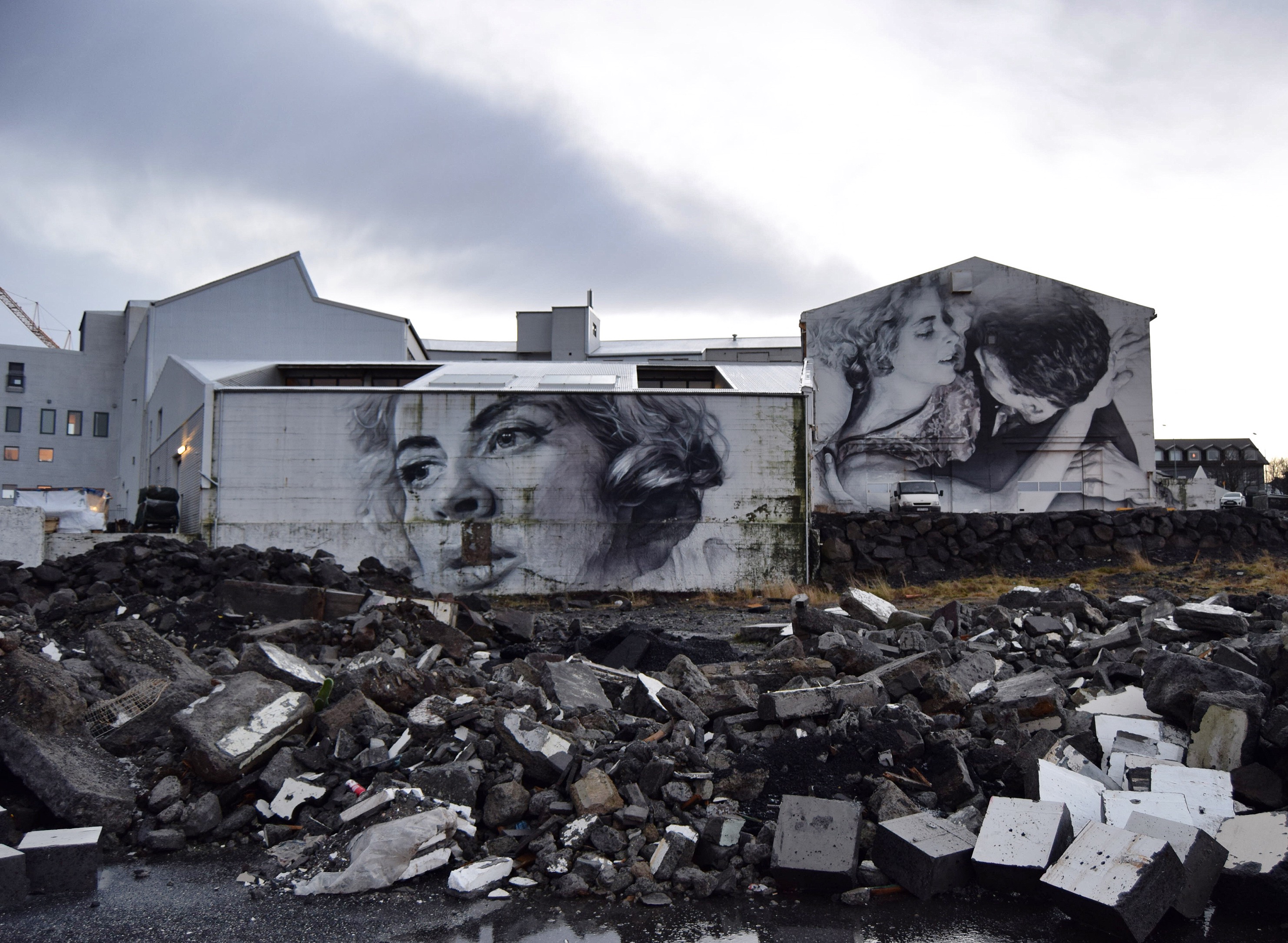 It was now quarter past twelve and finally the dawn was breaking. The heavy cloud cover that had stopped us seeing the mountain and the sky was slowly lifting, giving us hope for our evening boat trip. Now there were large patches of blue sky streaked with icy cloud tinged pink by the rising sun. We set out this morning by moonlight, even though it was eleven o’clock, and now the moon was still there, high in the sky, outshining the rising sun. 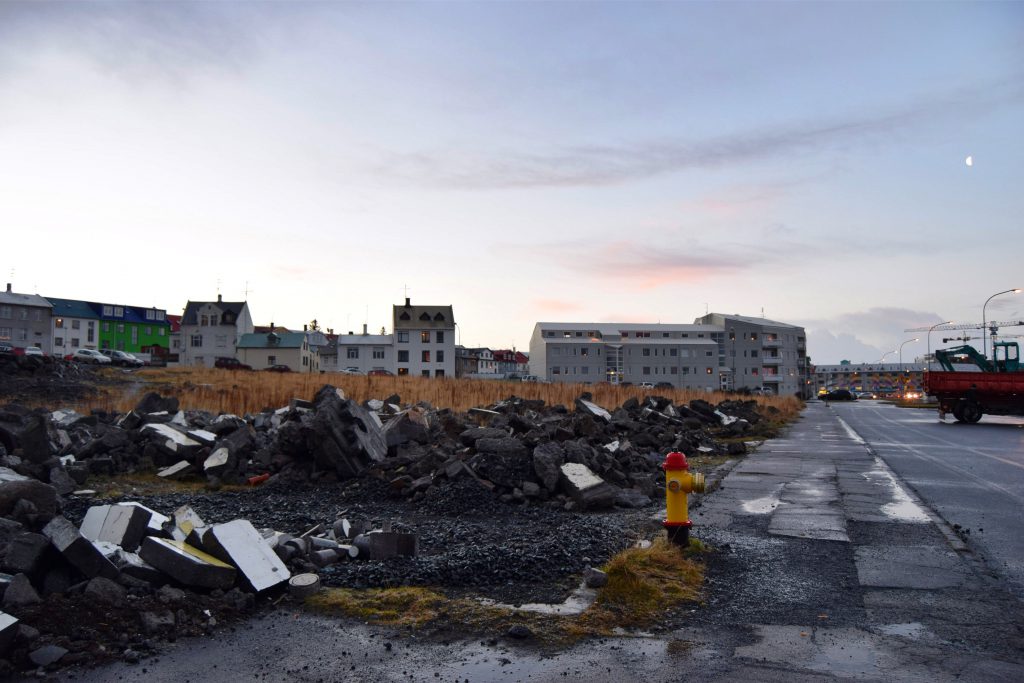 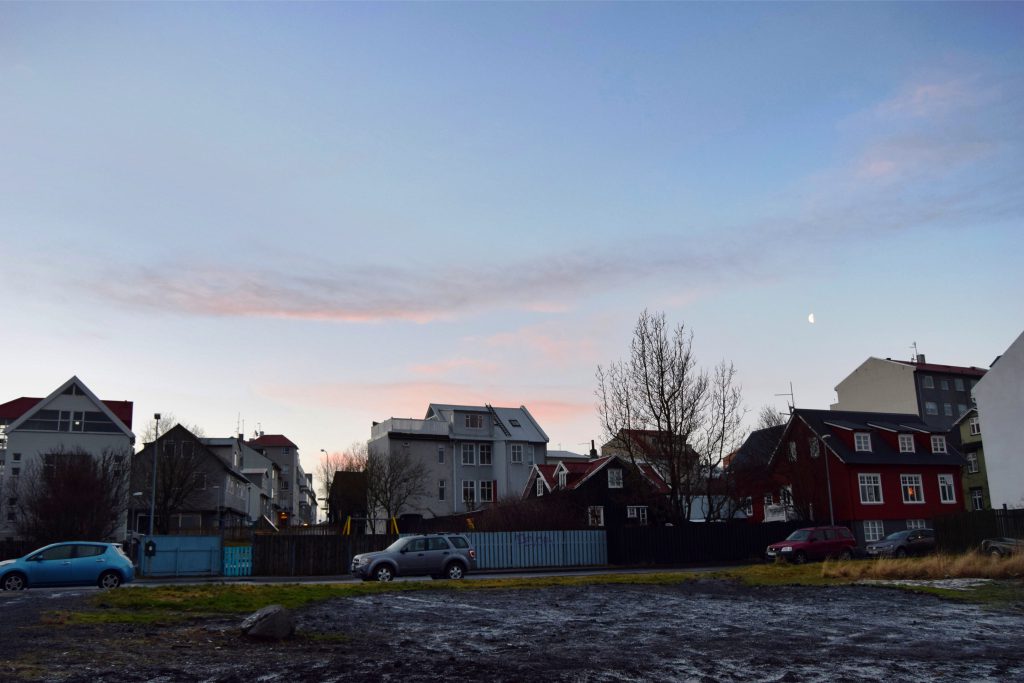 With one last look at the harbour where dark clouds were gathering over the sea gradually hiding the mountains again, we turned towards the city. 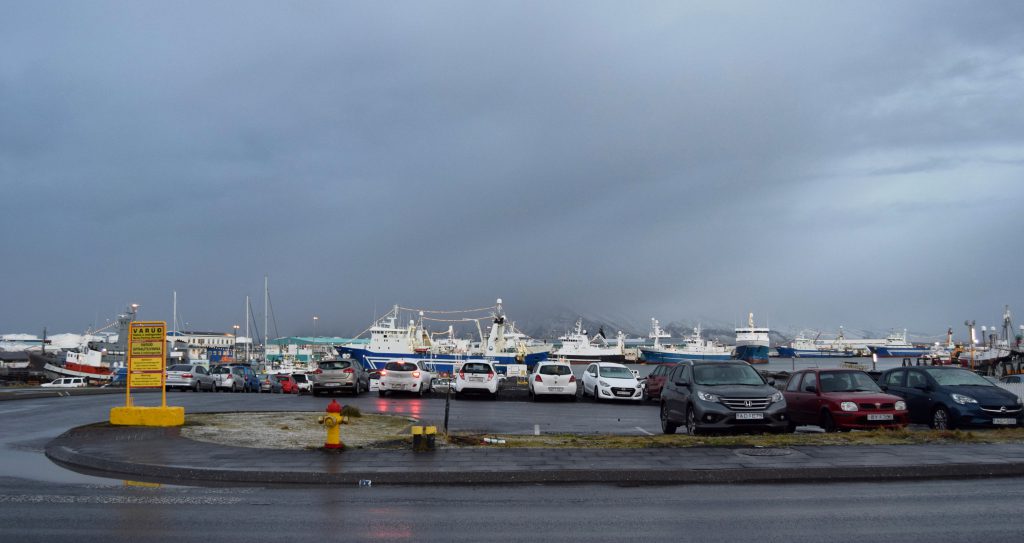 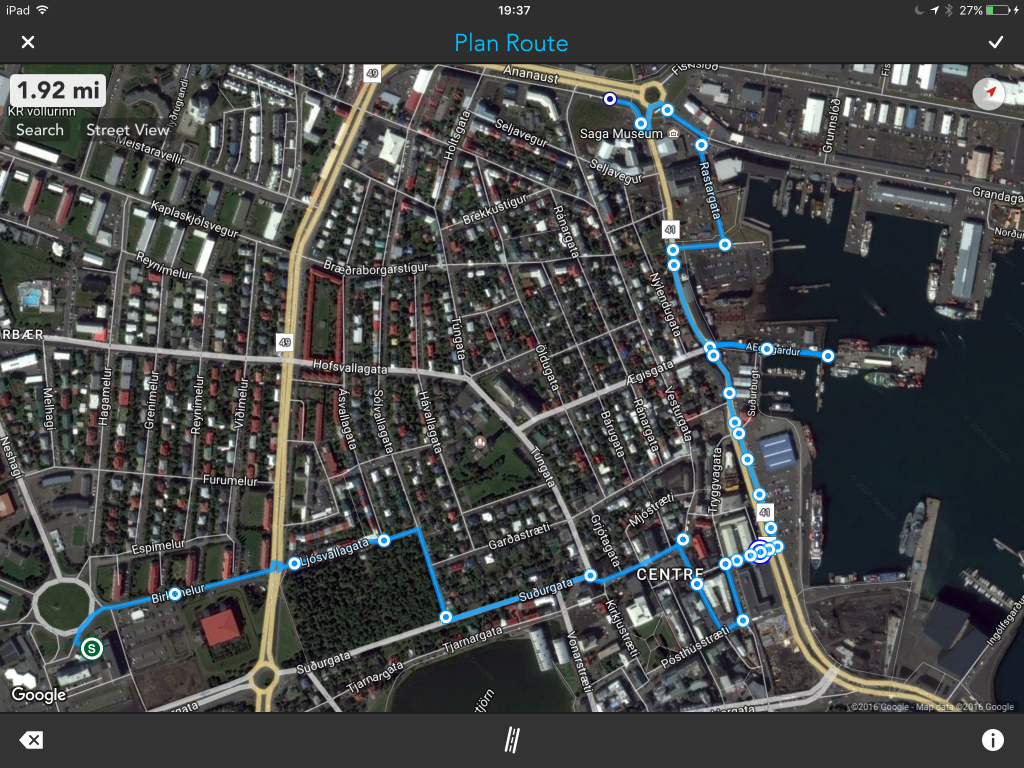 7 thoughts on “The land of the midday moon”