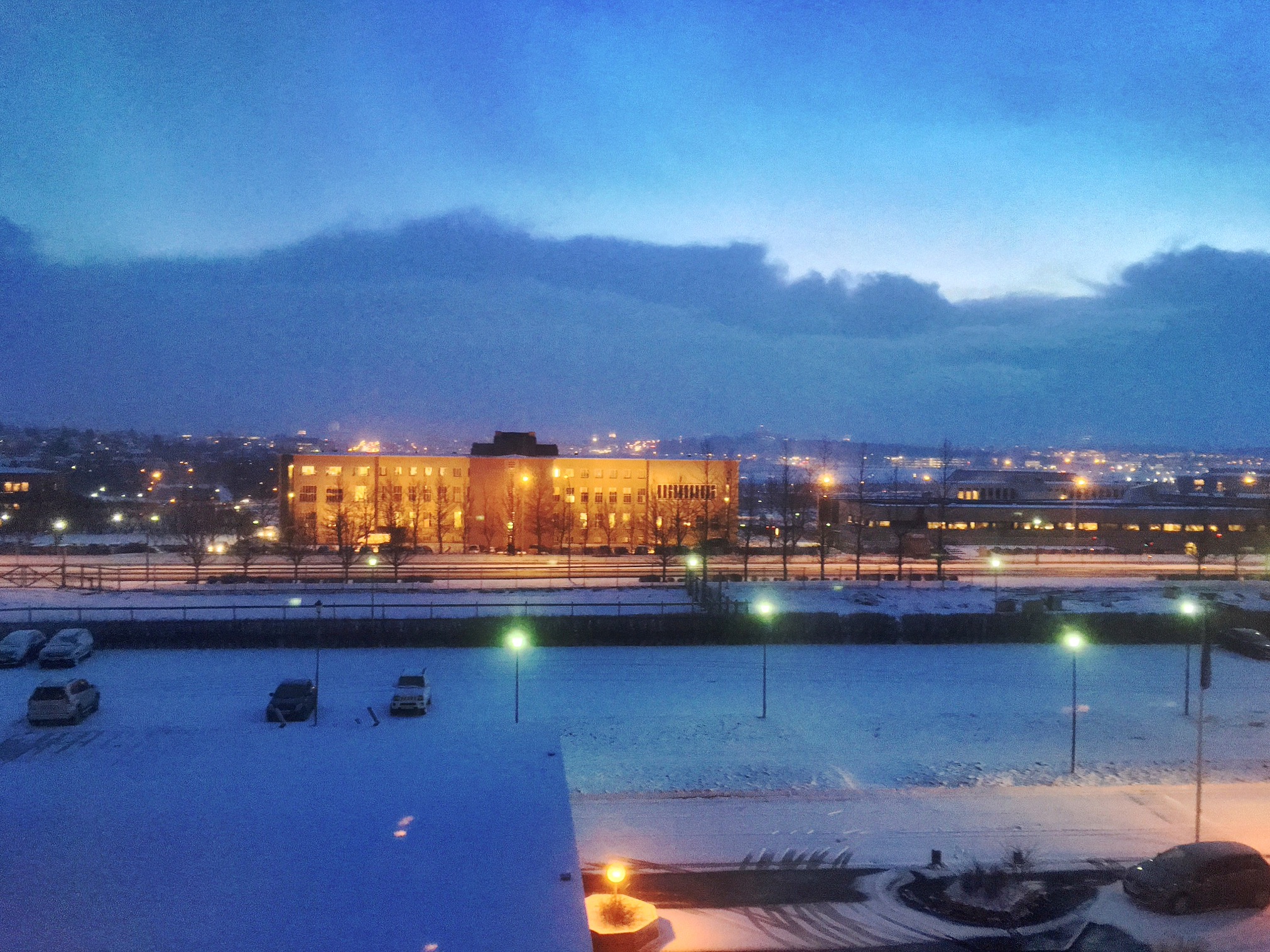 By the time Commando got back from his run I’d had my smelly shower and was feeling much warmer. My leggings, hung over the back of a chair by the radiator with my coat, had even dried out. There’d been another heavy snow fall when he was out running but, apart from the problem of breathing in his snow covered buff (a kind of runner’s neck scarf come face protector if you were wondering) and cold hands, he survived with few problems and his trail shoes coped admirably with the snow.

While he thawed out in the shower I perused the maps, trying to plan our next mission. Through our hotel window we’d seen a distant light. It changed colour and seemed to be revolving. At first we’d throught it was a lighthouse but, looking at the maps, I could see it was Perlan a landmark building with a revolving restaurant, cafe and viewing deck. It seemed like a good place to visit and not too far away.

First we had a very late breakfast, or maybe brunch. Frankly, after muesli with skir, waffles with berries and a little scrambled egg, four times the breakfast I usually eat, I could easily have lain on the bed for a few hours clutching my stomach. Commando, who’d easily eaten four times as much as me, was raring to go though, so we piled on the layers and headed out. A look through the window by the lift showed us it was no longer snowing  but the snow was still on the ground and it was light, or as light as it gets in Iceland in winter. 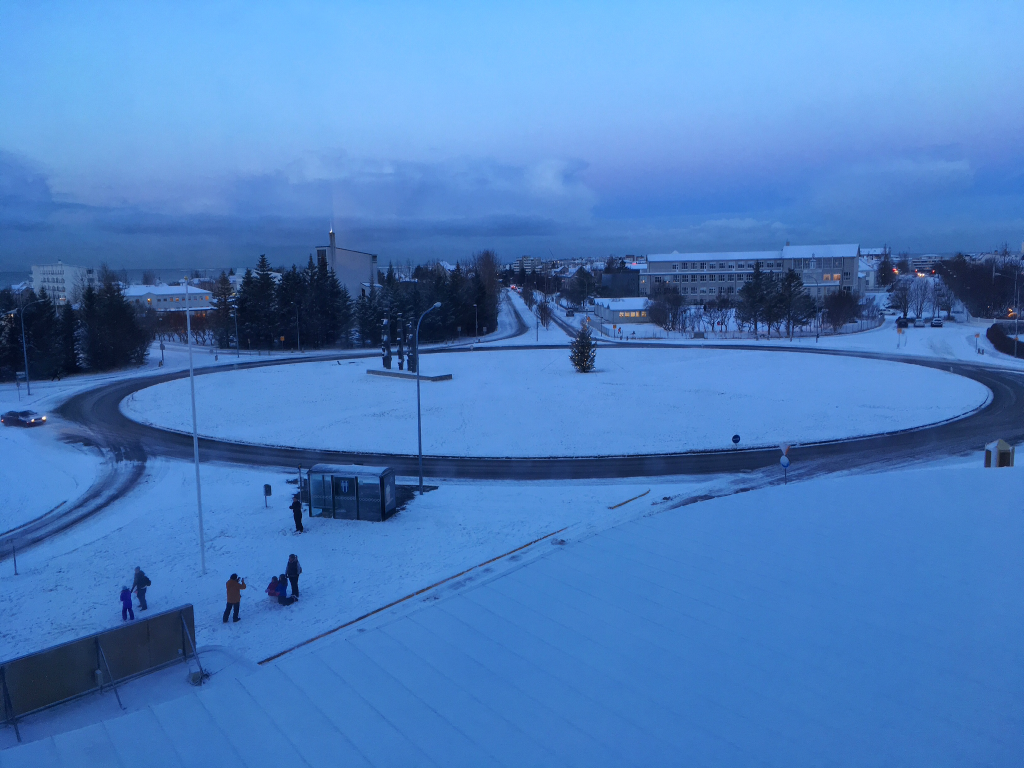 Outside, fully equipped with phones and a good idea of directions, we headed  exactly the same way I had earlier in the dark. When we reached the main road I realised my mistake then had been to turn left. Had I turned right I’d have been heading towards the sea, exactly as I’d planned. Obviously, walking around the outside of the hotel had confused my sense of direction.

At the roundabout we turned right onto Hringbraut, the main road I’d crossed in the dark earlier. Now we were walking beside the Vatnsmýrin Nature Reserve, a large expanse of marshland that is the water source for Tjörnin Lake and a nesting ground for water birds. Once this was agricultural land, a little like our water meadows but, in 1981, it was designated a conservation area. Sandwiched between  Reykjavik University, the large building opposite our hotel window, and the local Reykjavik airport, it looked a cold, inhospitable place of frozen water and icy plants.

Just looking at the poor ducks swimming about on the patches of unfrozen water made me shiver. When we came to a strange kind of weir, the point where the water flowed under the road towards Tjörnin Lake, we were surprised to see Steam rising from the water. Obviously not all the water was as cold as it looked and a lone duck was merrily swimming right by the outflow.
“If I was him I’d stay there all winter,” I said, “it looks like a little duck hot spa.” 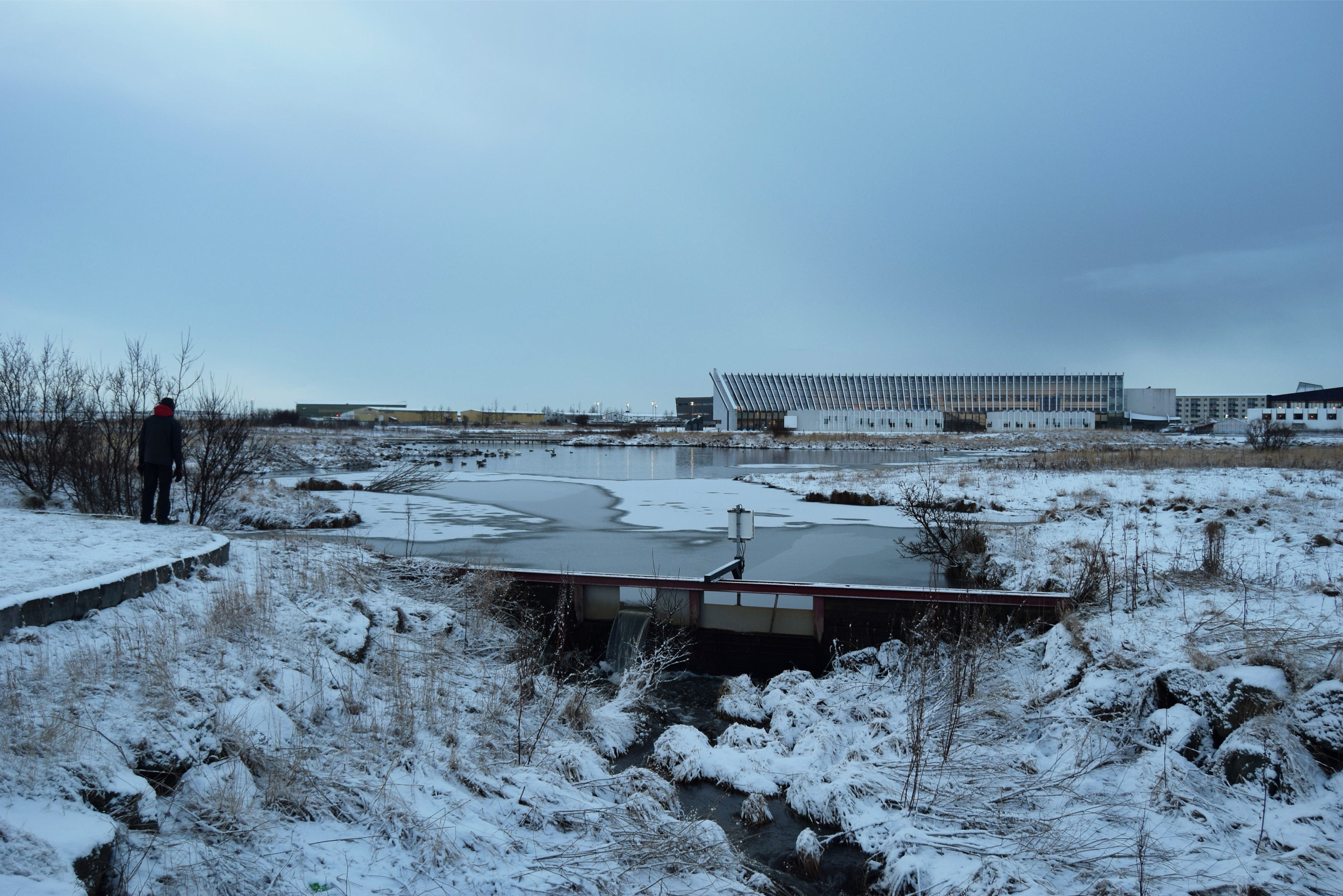 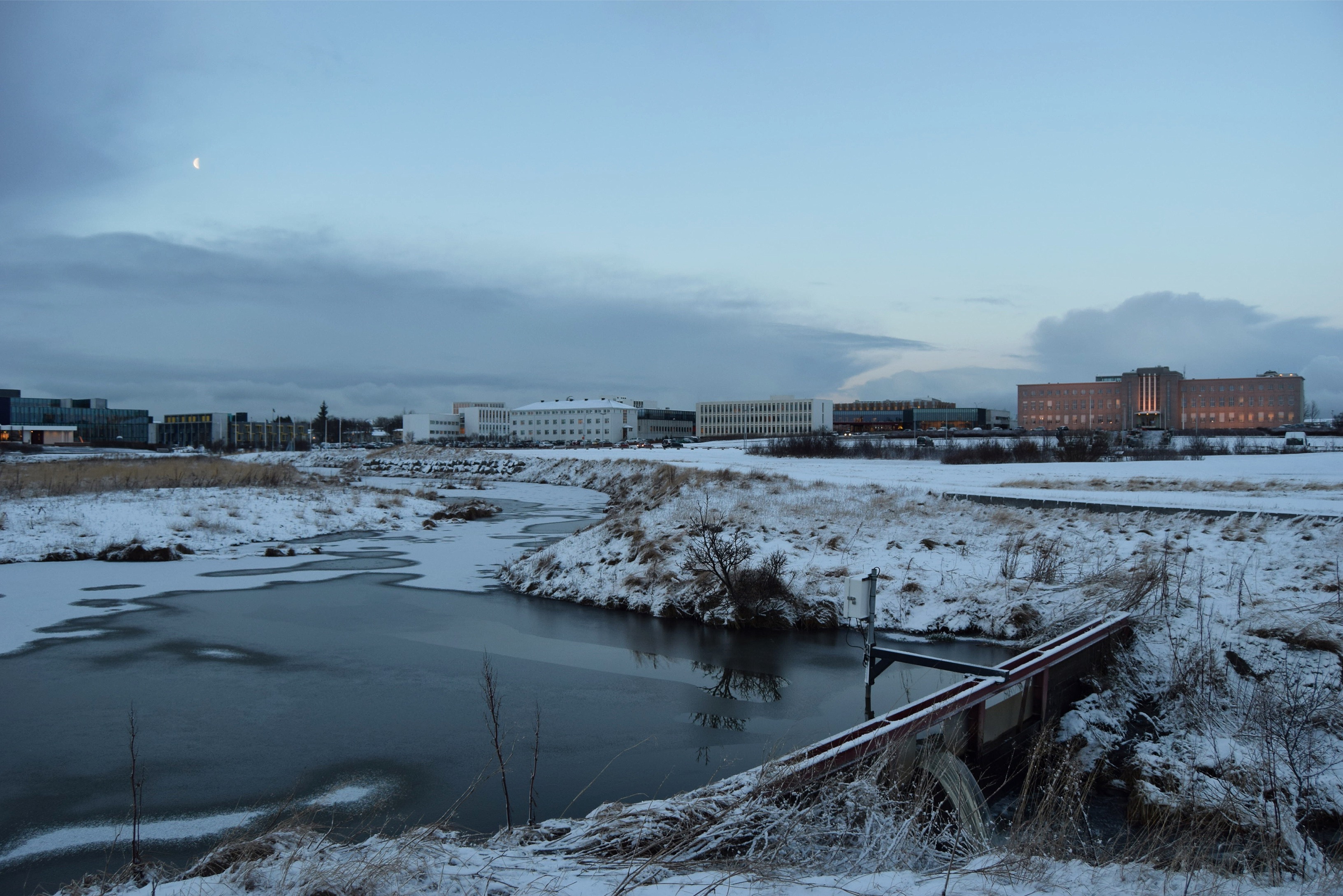 With a quick check of the map we crossed a side road and carried on. Now we were walking beside the airport, built by British Military forces in World War II and used now for domestic flights and pilot training. We stopped for a while to watch one little dash 8 plane land and another take off. Thankfully the engine nacelles Commando builds all did their job admirably and all engines stayed firmly attached to planes.  It seemed a shame we hadn’t been able to fly in here rather than into Keflavik an hour away. It would have saved on a long coach journey and given us more time in Reykjavik. 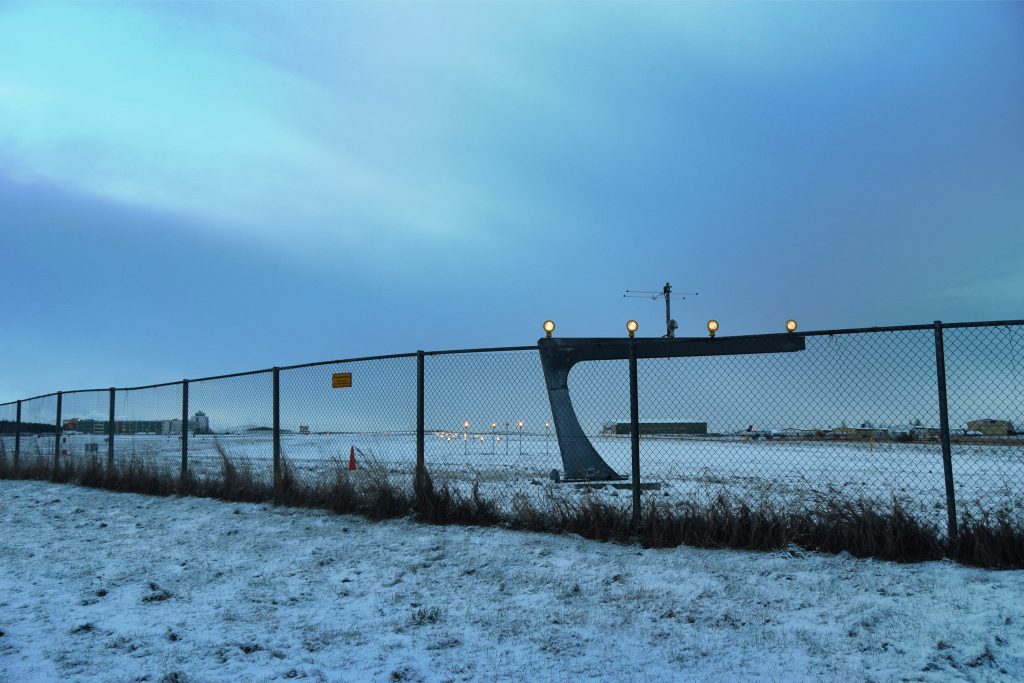 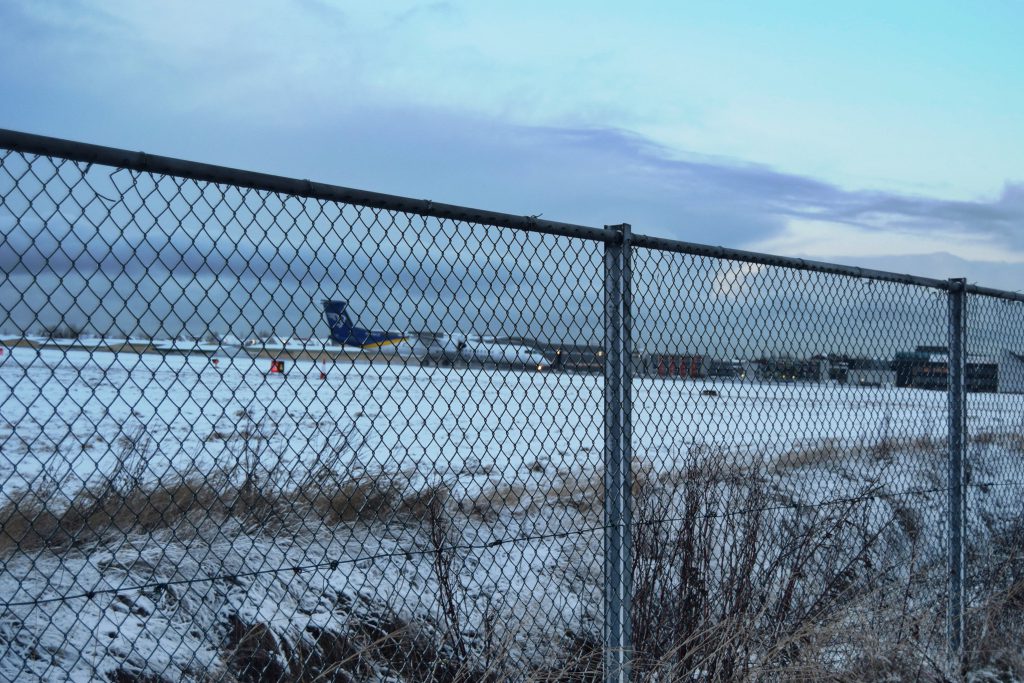 With a great deal of anxious looking at the map we turned off at the next junction. We could see Perlan at the top of Öskjuhlíð hill nestled amongst the trees but we weren’t entirely sure we were going the right way, even with the map. Then, just as we had almost given up hope of finding anything but a busy road, we saw a snow covered path leading off to our left into the pines. 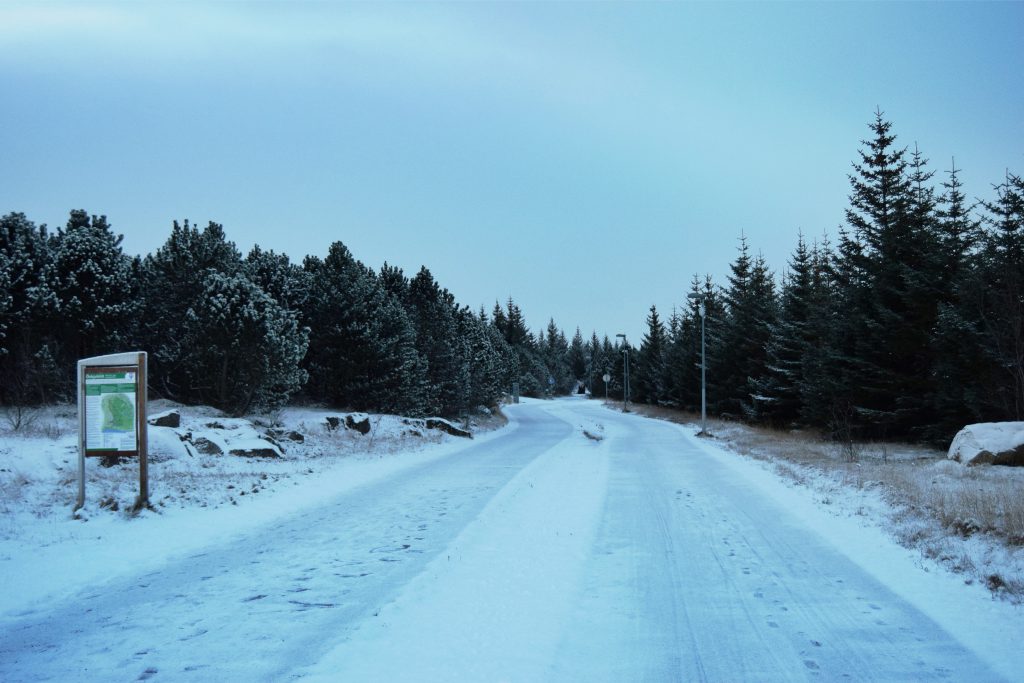 We were now at the base of Öskjuhlíð hill, a popular outdoor recreation area for locals. In fact we could hear children laughing and playing somewhere off the trail. During World War II the British Army built shelters and barracks here and, apparently, some remain amongst the pine trees planted in the 1950’s. With more time we might have sought them out but the trail we were following soon began to wind steeply into the trees and, for a while, all our concentration was taken up with climbing without slipping in the virgin snow. Commando skidded a couple of times but my Yaktrax kept me on my feet. 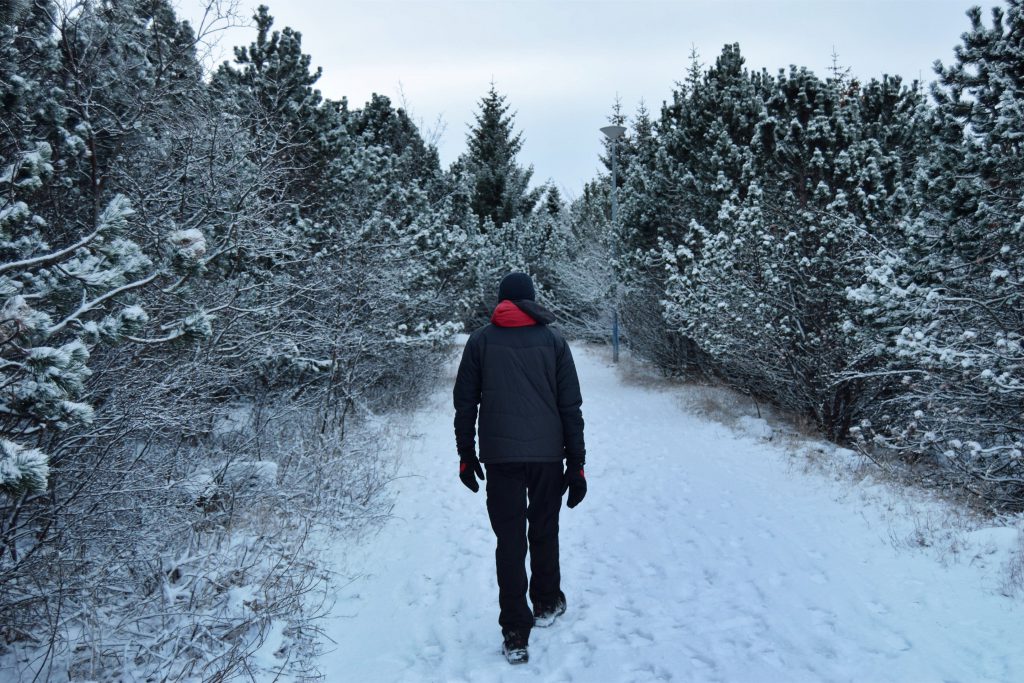 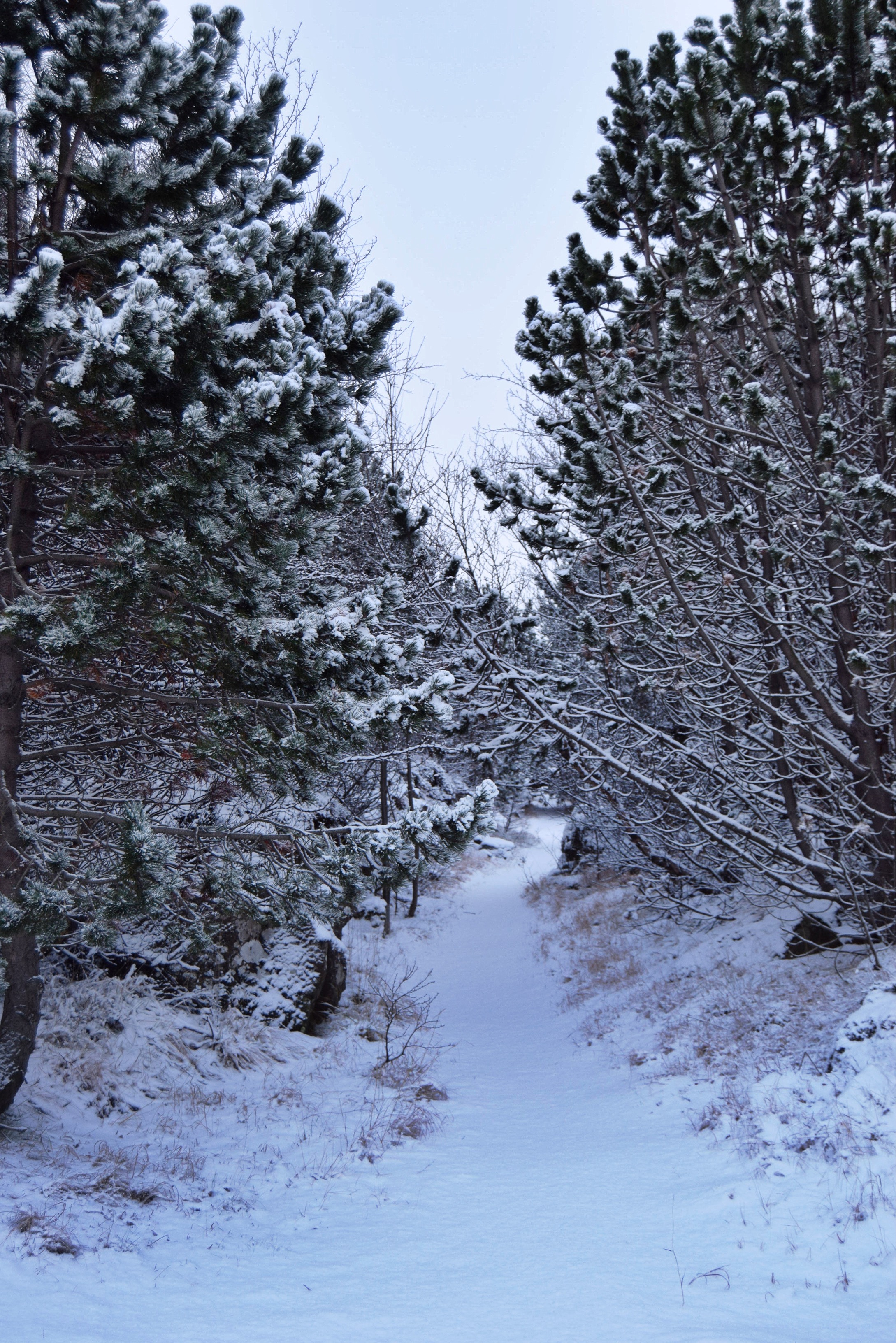 Soon the distant sound of children had gone and we were completely alone on the snowy trail. With no sounds but our own breath and the crunch of our boots on the trail we could have been the only people in the world or explorers crossing an Arctic forest. As we climbed a little higher and the trees thinned out the views captured our attention. Across craggy volcanic boulders dusted with snow the spire of Hallgrímskirkja pointed into a sky layered in blue, turquoise and peachy pink. At one o’clock it was hard to tell whether this was the colour of dawn or dusk as one seems to meld into the other here with nothing much in between. 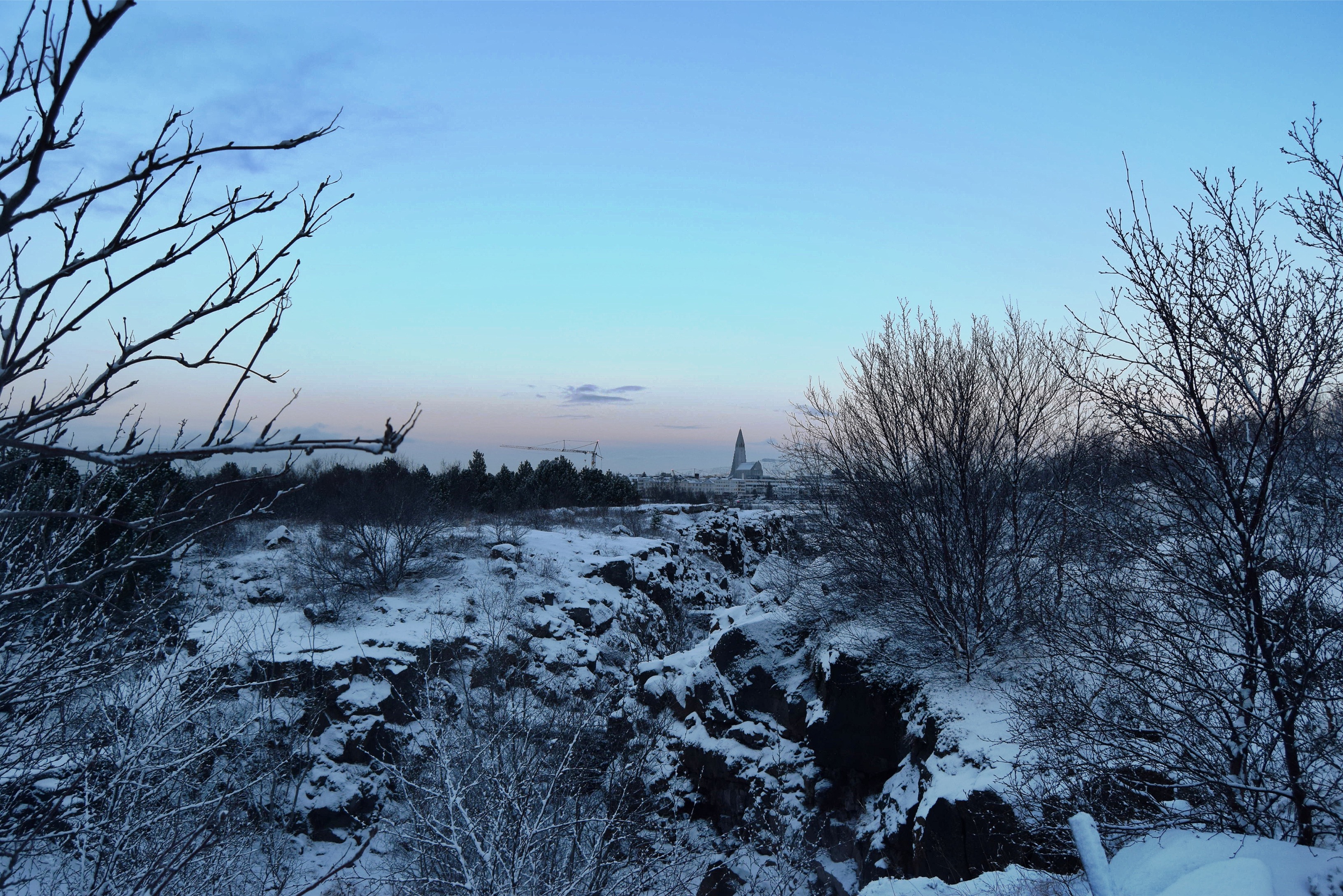 The trail, less steep now, wound around the hill and soon we looked out across the airport. A thin line of golden fairy lights to the right was actually the road we’d walked down and, somewhere amongst the jumble of buildings was our hotel. Higher still it was back to Hallgrímskirkja with Mount Esja’s snow capped peaks as a backdrop. Finally, as the dome of Perlan loomed in front of us, we saw the sea, a grey blue line on the horizon. 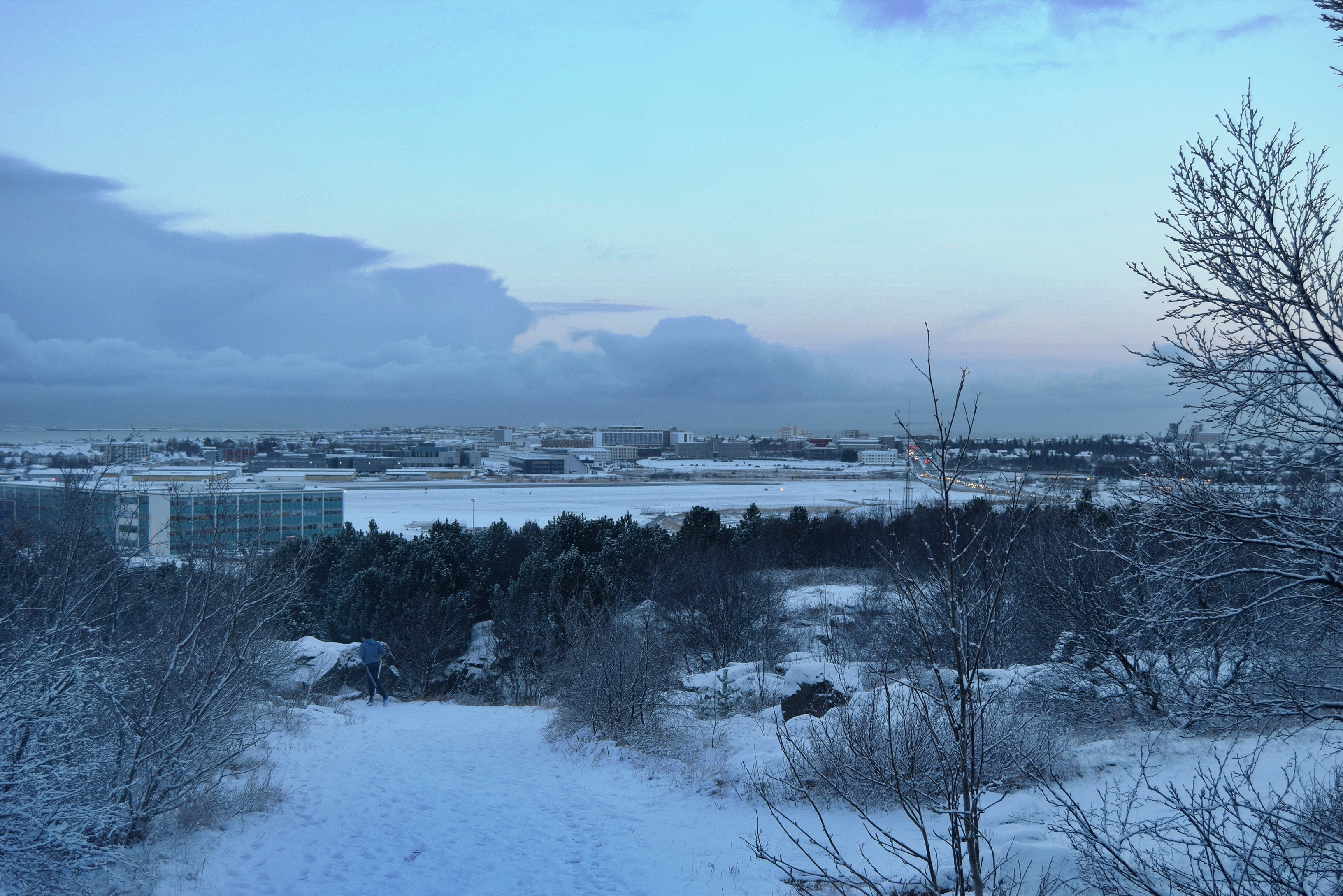 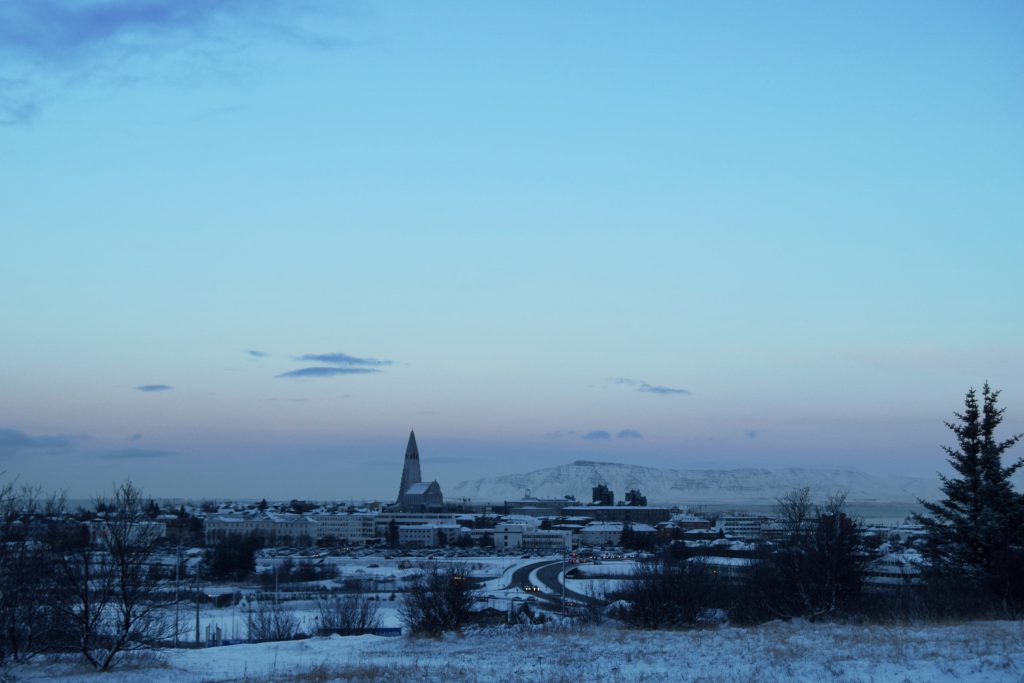 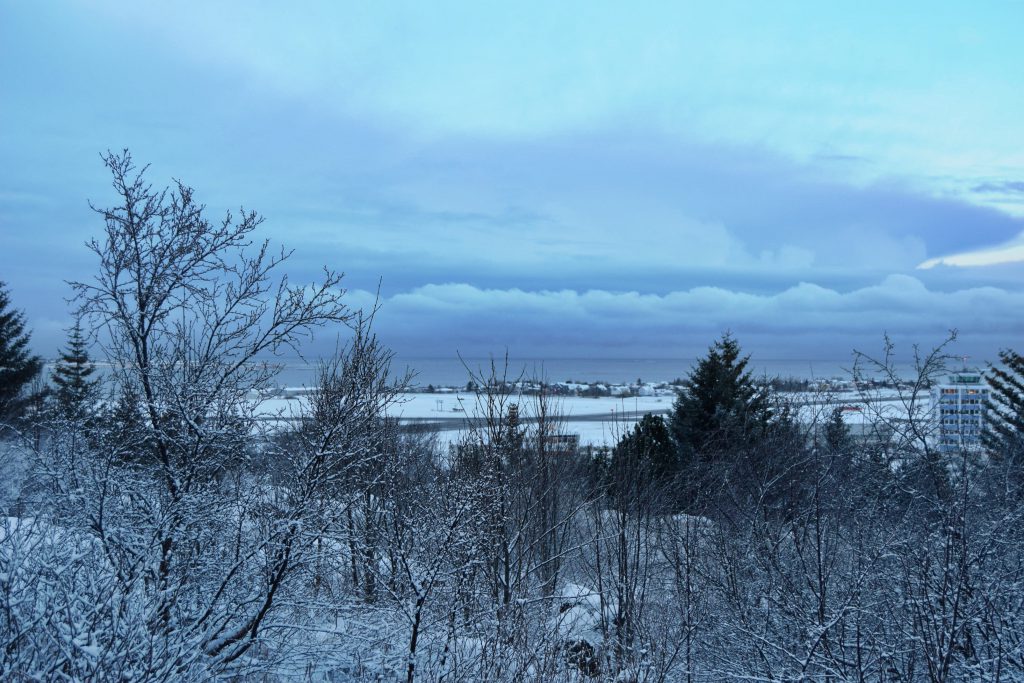 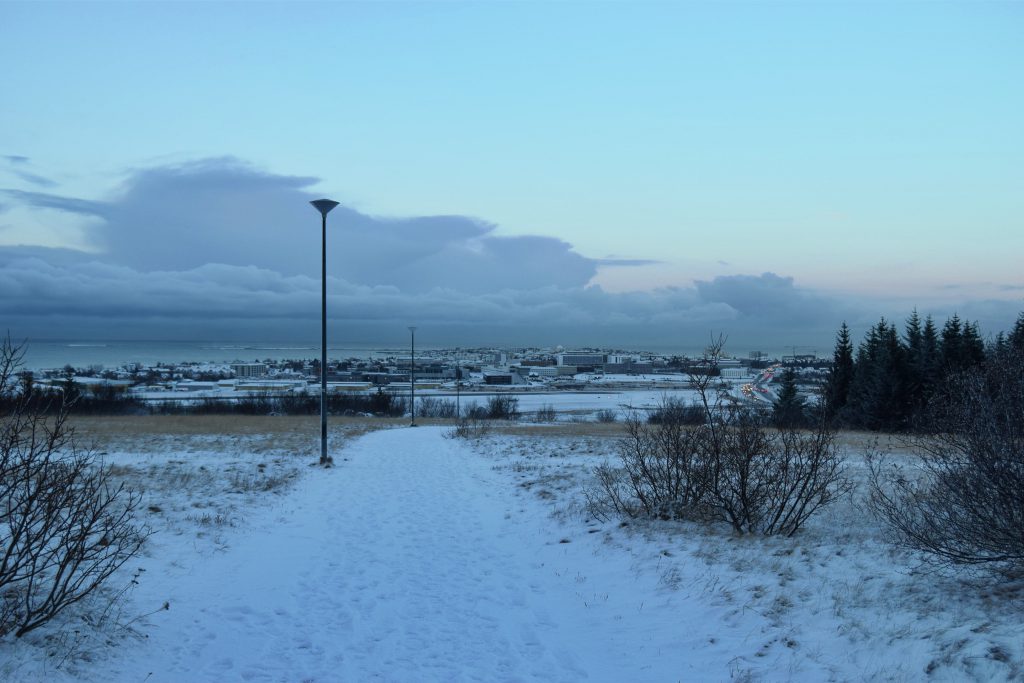 After that our full attention was taken up by the frosty dome ahead of us. Öskjuhlíð is the source of Reykjavik’s hot water. In 1928 the first holes were drilled to tap geothermal heat and provide hot water for the city. Öskjuhlid, with its elevation of sixty one metres above sea level, was the obvious place to build hot water storage tanks that would provide sufficient pressure to force water as high as Hallgrimskirkja. Of course a ring of hot water tanks is not the prettiest sight and, almost at once, artist Jóhannes Kjarval, came up with a plan to build a temple like structure, clothed in mirrors over them. It was sixty years before his idea came to fruition thanks to mayor Davíð Oddsson and artist Ingimundur Sveinsson. 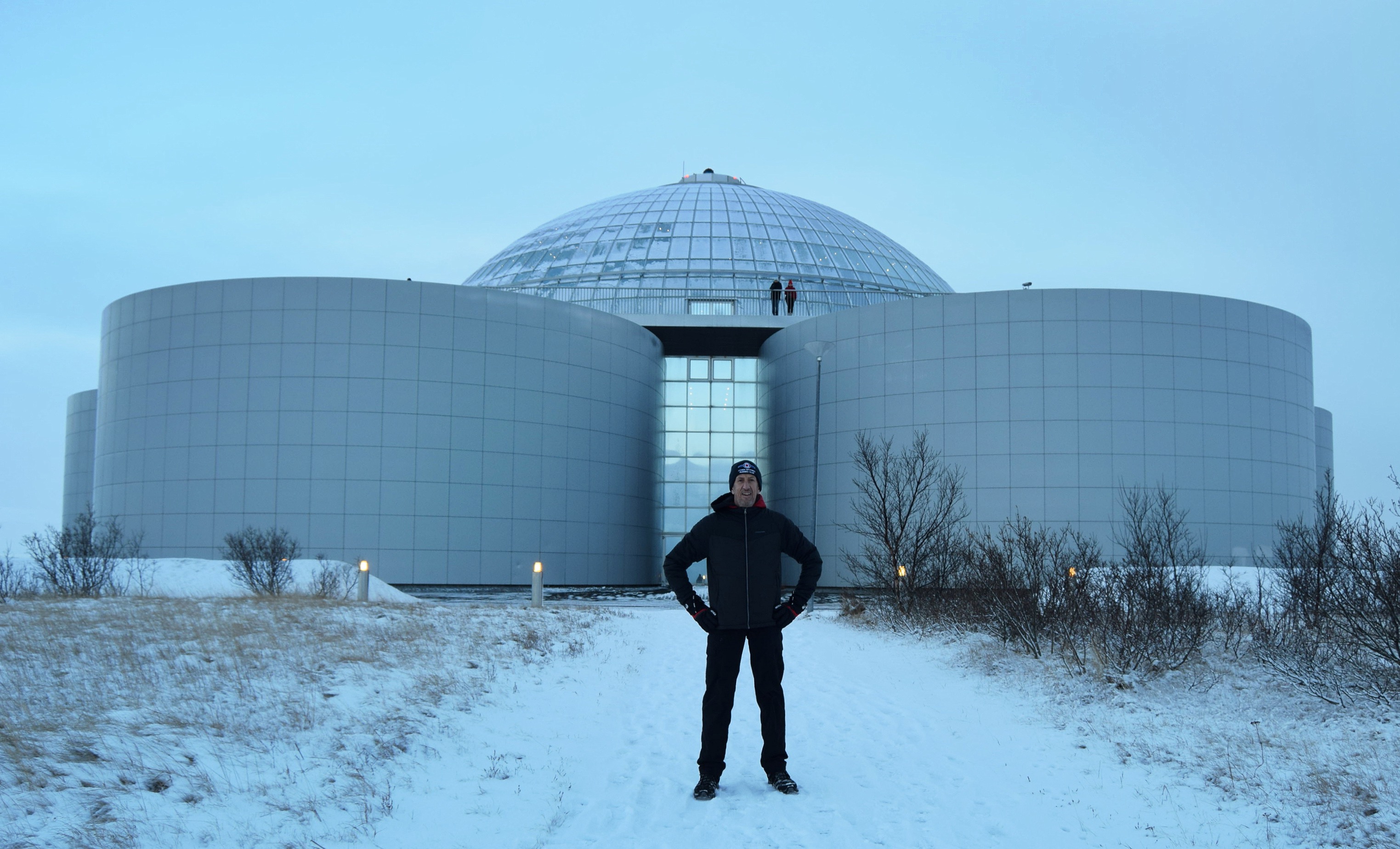 Sitting atop the six huge circular hot water storage tanks, the building looks like a flower from above. Looking at the glass dome covered with a thin layer of snow from the ground it was easy to see where the name Perlan, meaning the pearl, came from. 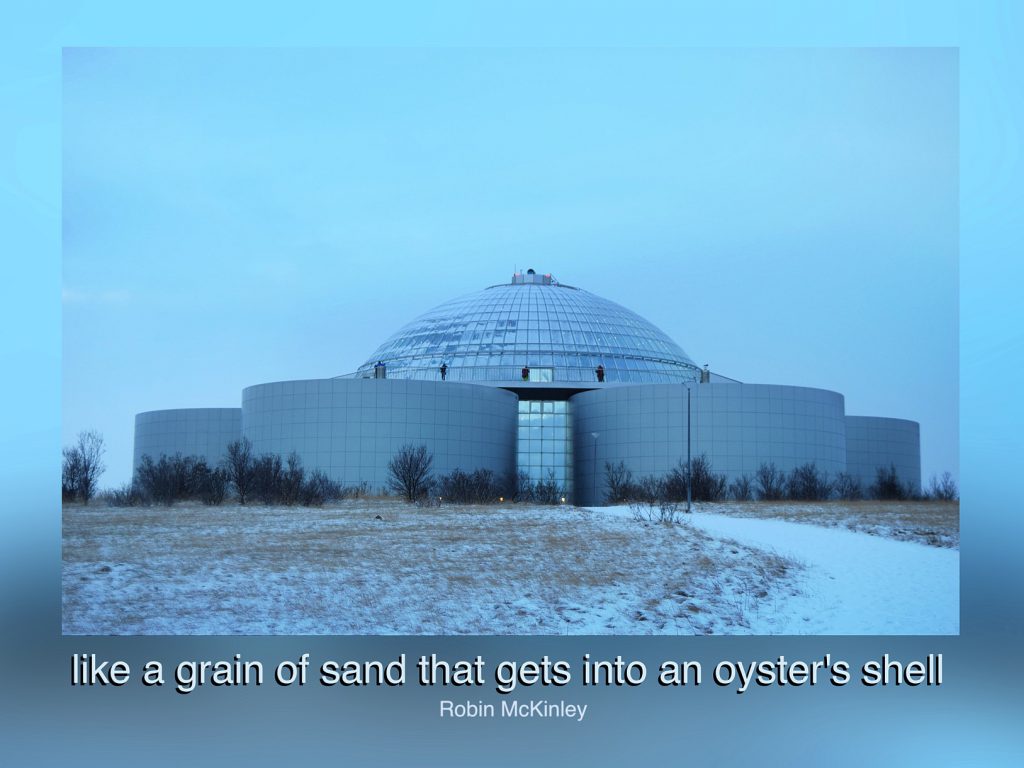 We could see figures walking around  the walkway above the tanks and, from what I’d read, there was a cafe inside. After our chilly climb the idea of coffee was quite appealing, but first we had to find a way inside. After an interminable trudge around what felt like miles of hot water tank, we finally came to the entrance at the exact moment a coach disgorged hundreds of Japanese tourists. Rather than get caught up in the stampede to get inside, we spent a few minutes taking photos of the sculptures outside. 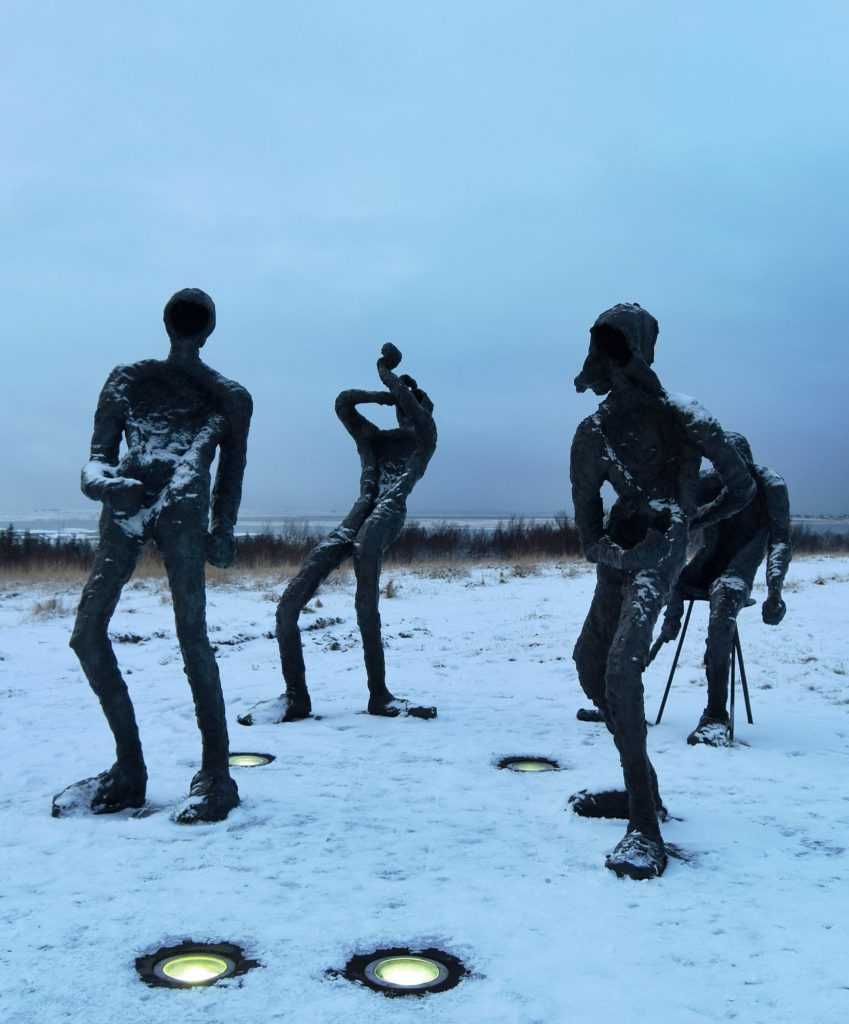 The group of four bronze figures, created in 1970, are the work of Torbjorg Palsdottir. Called Dansleikur, or dancers, they seem to be playing invisible instruments and have such energy it’s impossible not to interact with them. Commando and I had great fun posing amongst them. 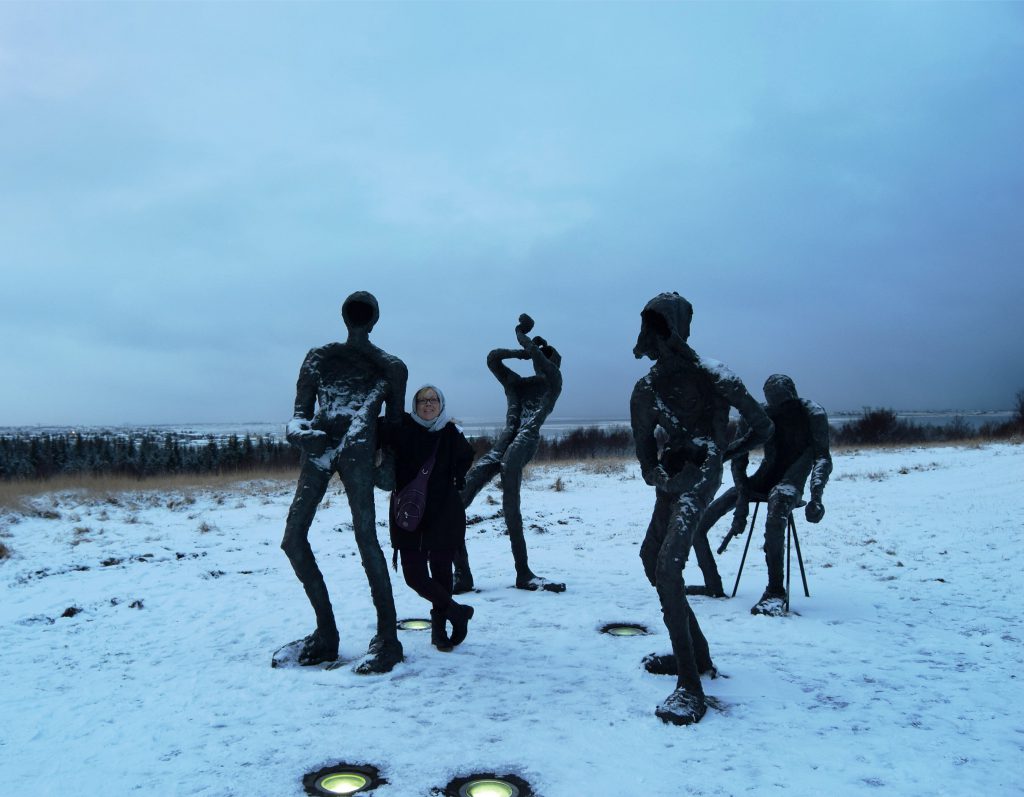 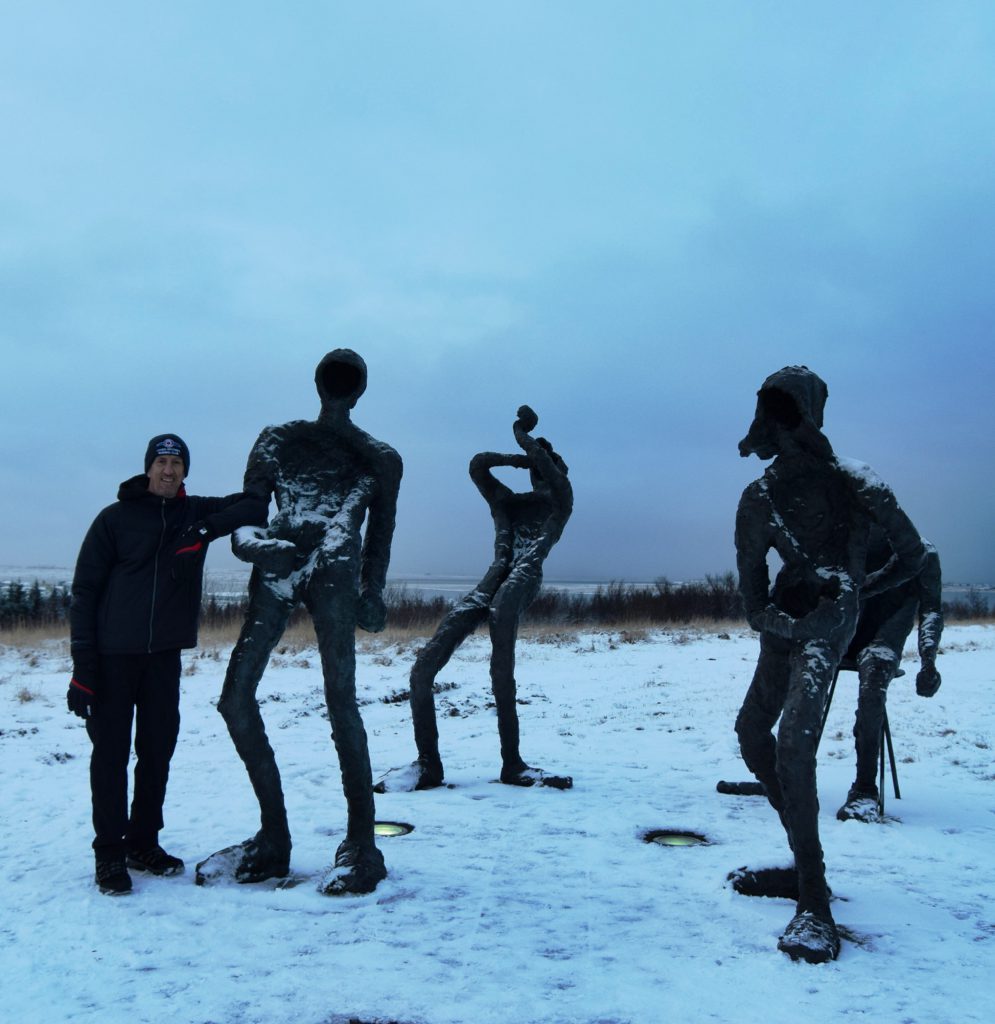 Inside, the building is all chrome, glass and tiers of  spiral stairs dotted with lights. The space is dominated by the curves of the hot water tanks and feels like a cross between a very expensive hotel, a cathedral and something a great deal more industrial. After our cold, lonely walk it was good to be inside in the warm, 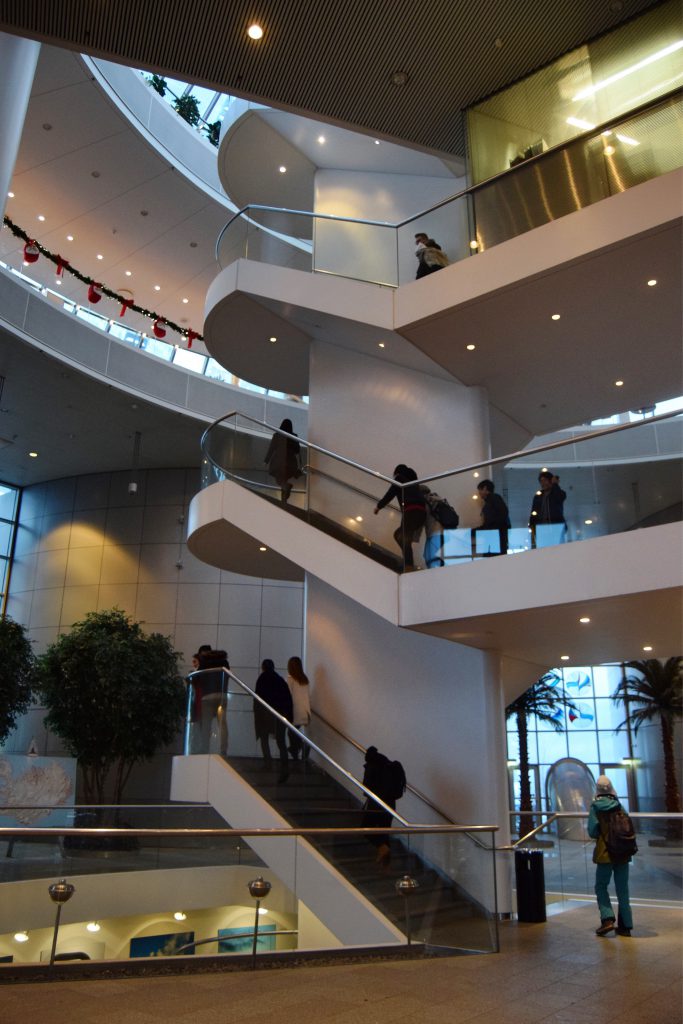 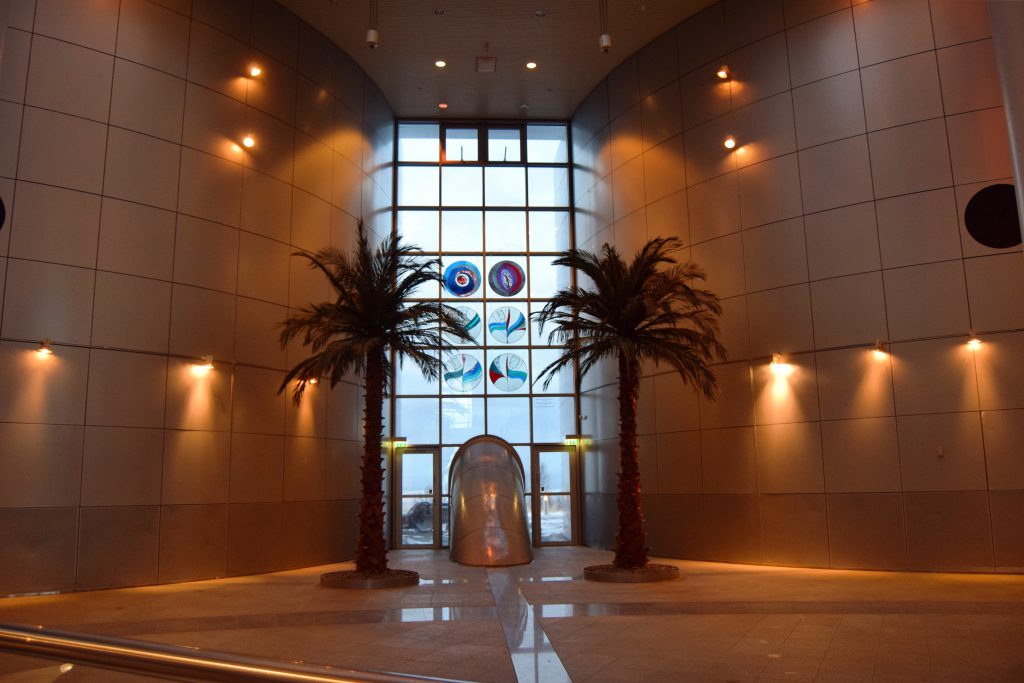 The Japanese tourists were still swarming up the stairs so we held back for a moment or two, waiting our turn and hoping the cafe wouldn’t be too crowded when we finally got there. Just as we were about to climb there was a terrific whoosh. By the time I’d realised this was the artificial geyser erupting from the basement, it was almost over and I’d missed my chance of a decent shot. With any luck we’d catch it again before we left but, for now, our main aim was coffee and a sit down to thaw out, a major preoccupation in an Icelandic winter. 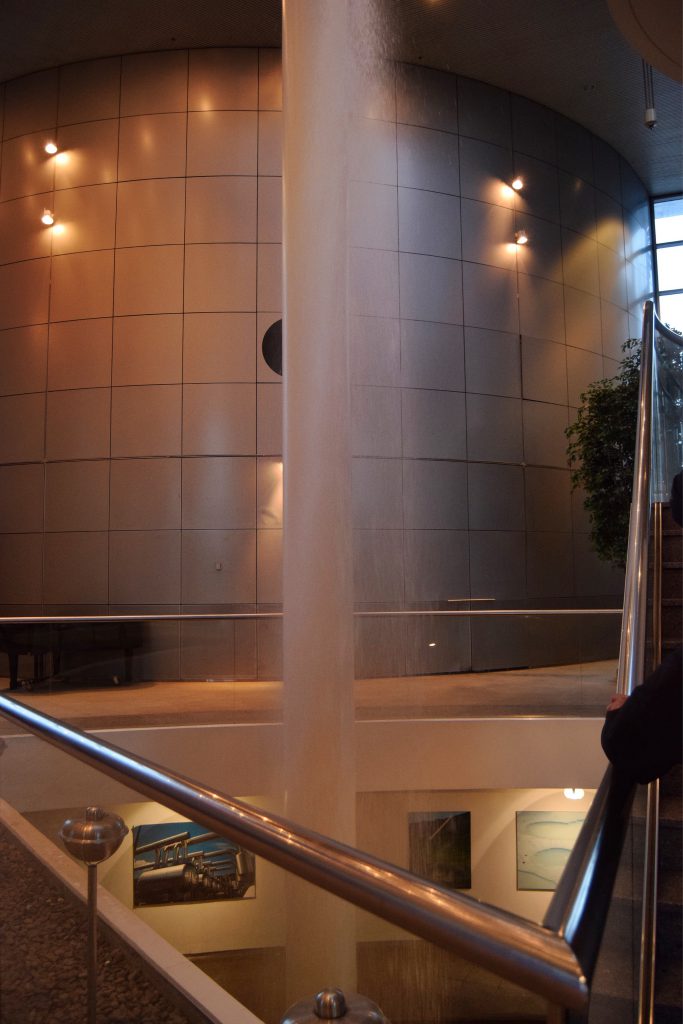 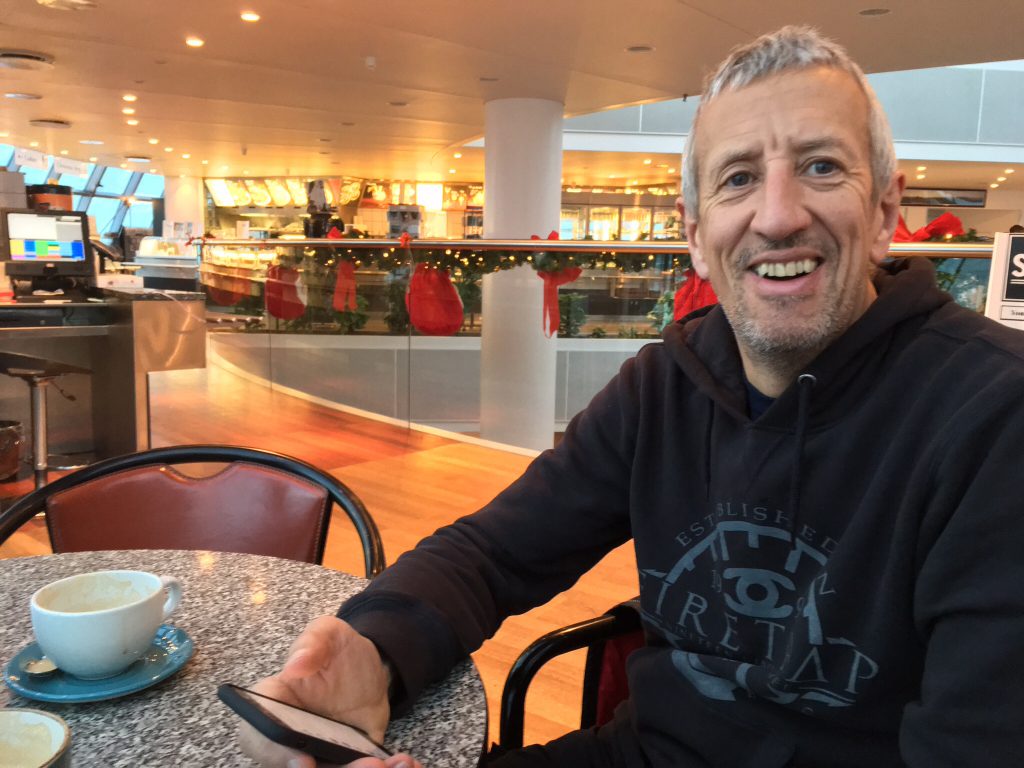 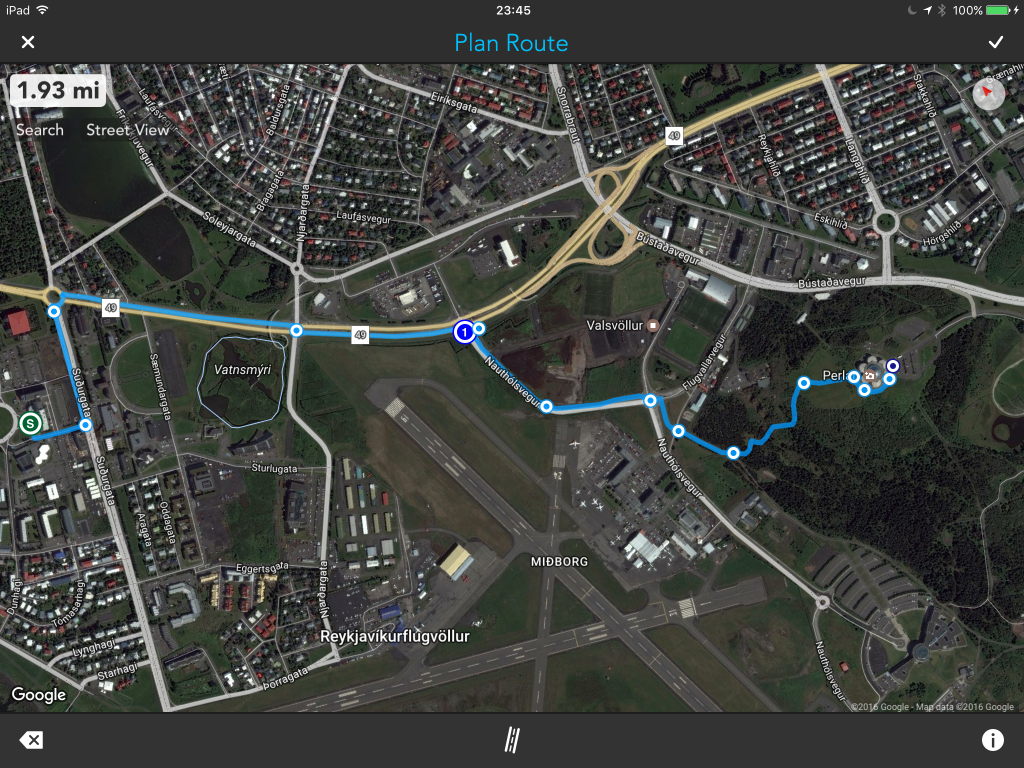 6 thoughts on “Icy water, woodland trails and a hidden pearl”