After a well earned and rather delicious cup of coffee in the cafe at Perlan it was time to go back outside again, this time onto the rooftop walkway. First we had to pile back on all the layers we’d stripped off when we were in the cafe. Obviously, this took quite some time. You would not believe the number of clothes you need to go outside in an Icelandic winter. No wonder everything seems to happen in slow motion here. Then it was through a fairly reluctant revolving door that took Commando’s muscle power to budge it. Perhaps it was frozen?

The reward for all that shoving was a breathtaking view across the edge of the woodland we’d walked through towards the airport runway. Beyond the airport was the sea and a line of dark cloud that told us there would be more snow along later. 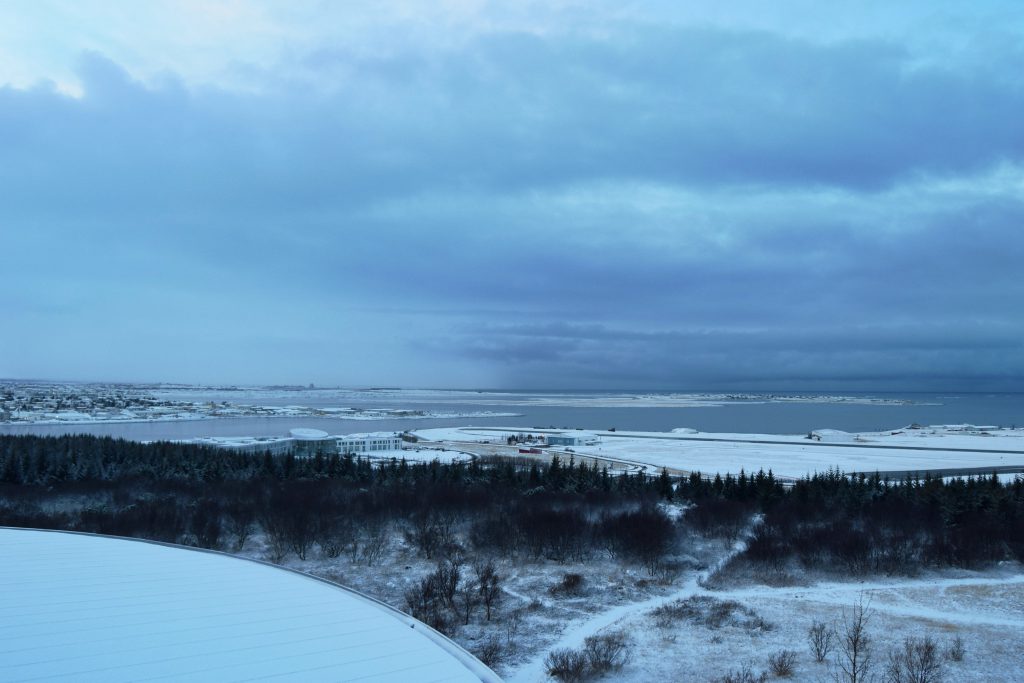 Crunching carefully across the icy walkway we made our way slowly around the outside of the dome. Soon we were looking out over all the colourful houses of Reykjavik, nestled below cloud covered hills. We stood for a while trying to pick out landmarks and I thought I spotted Harpa and the distinctive arch of  Kópavogskirkja but it was hard to get our bearings or be sure. Of course we weren’t alone on the icy walkway. The Japanese tourists had made it there before us and were wandering around taking photos just as I was. Pretty soon we were looking out over the mountains. Now I thought I recognised the spire of Fríkirkjan amongst the mass of snow clad roofs. 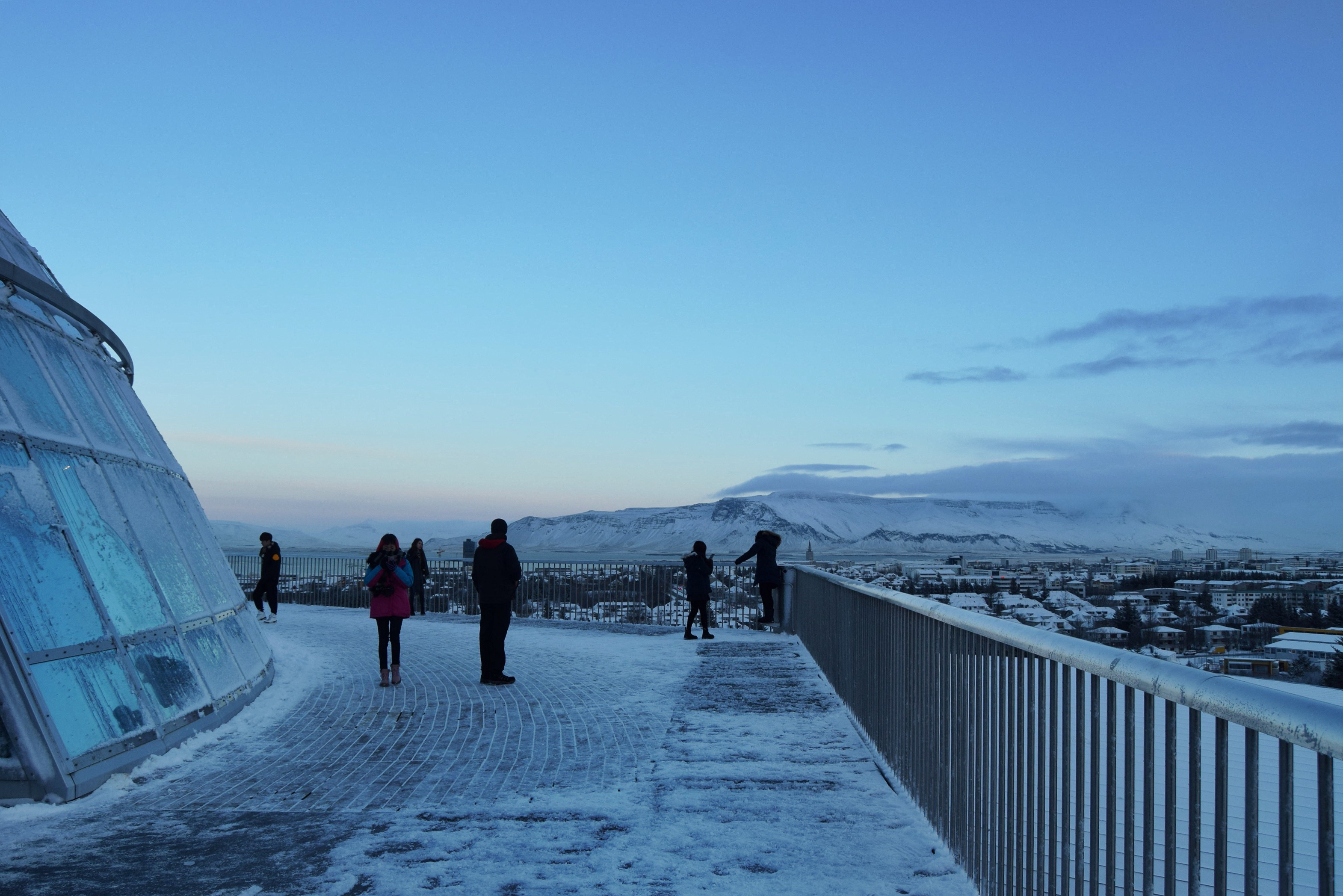 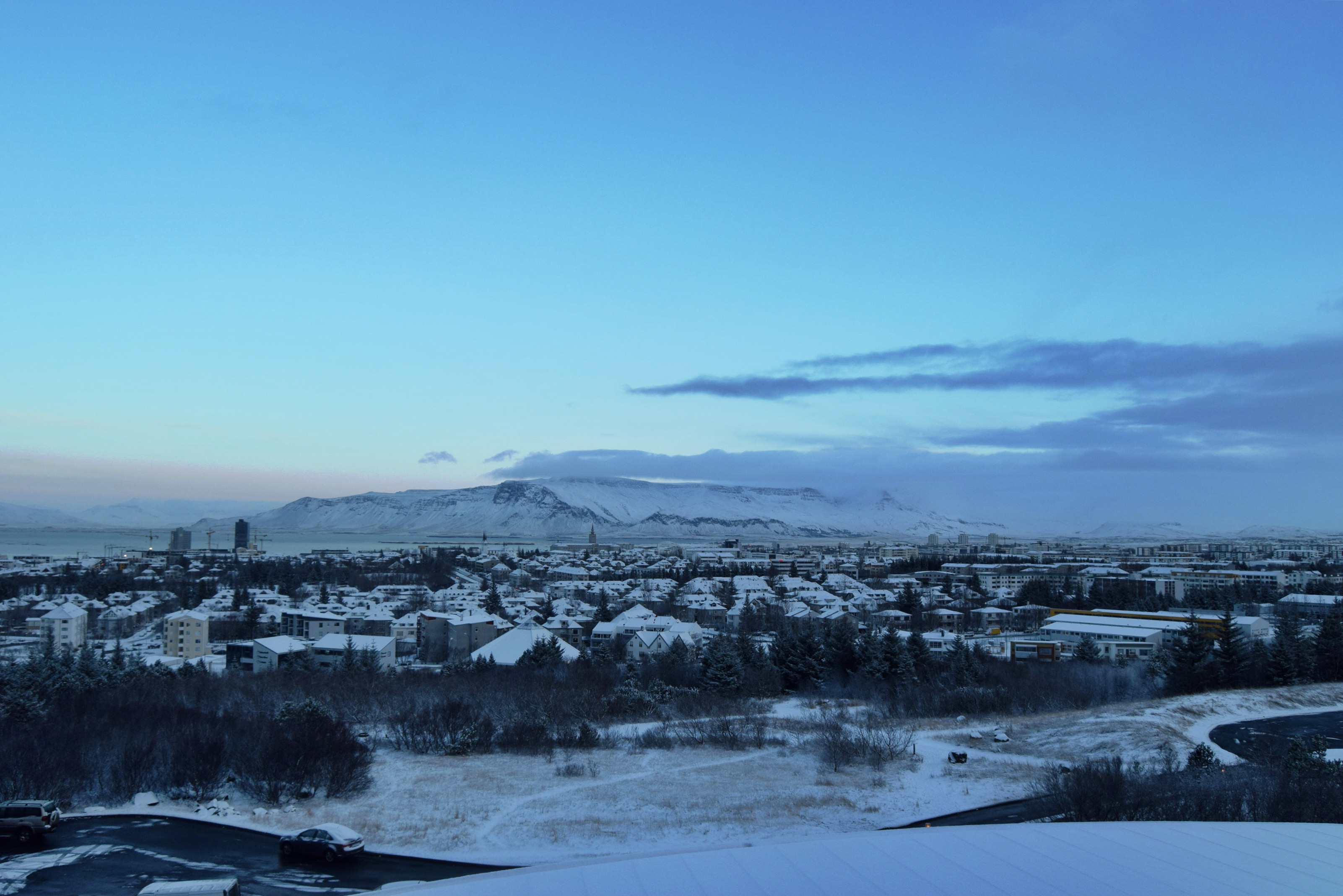 We stopped for a moment to take photographs of each other with the mountains and the layered sky as a backdrop. A passing Japanese tourist kindly offered to take a photograph of both of us together and did rather a good job with Commando’s phone. 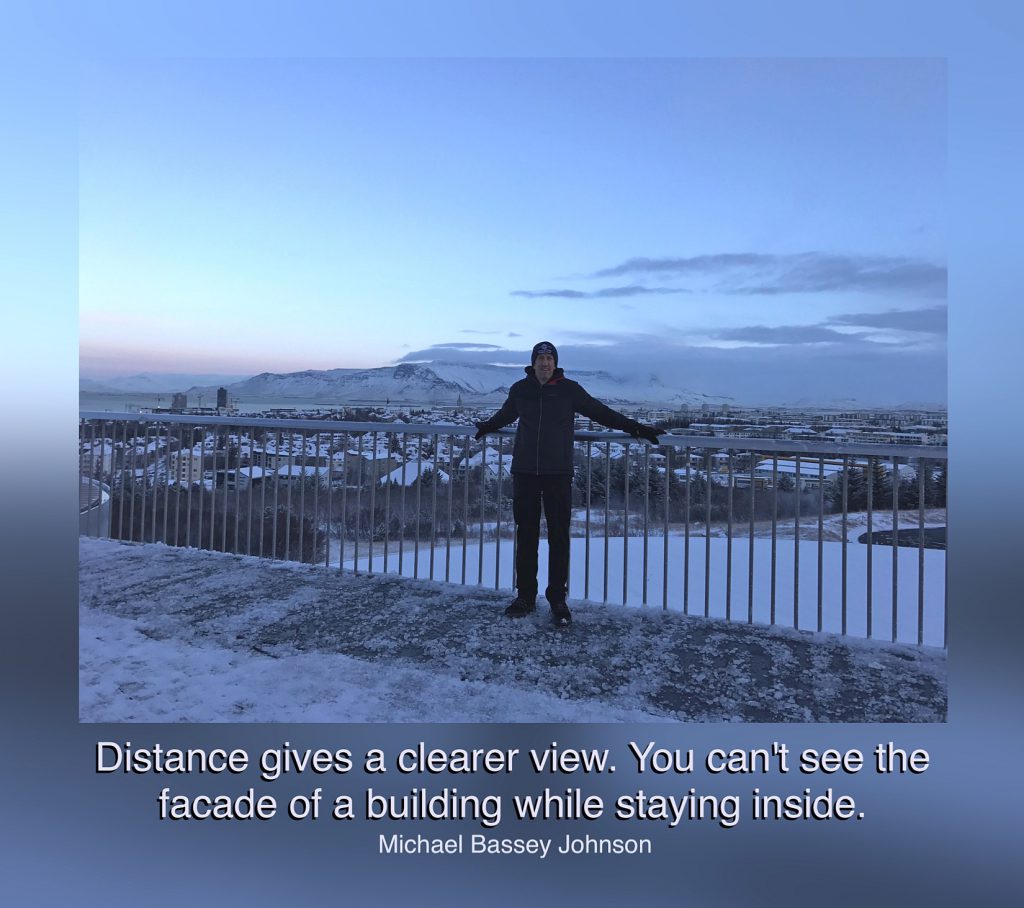 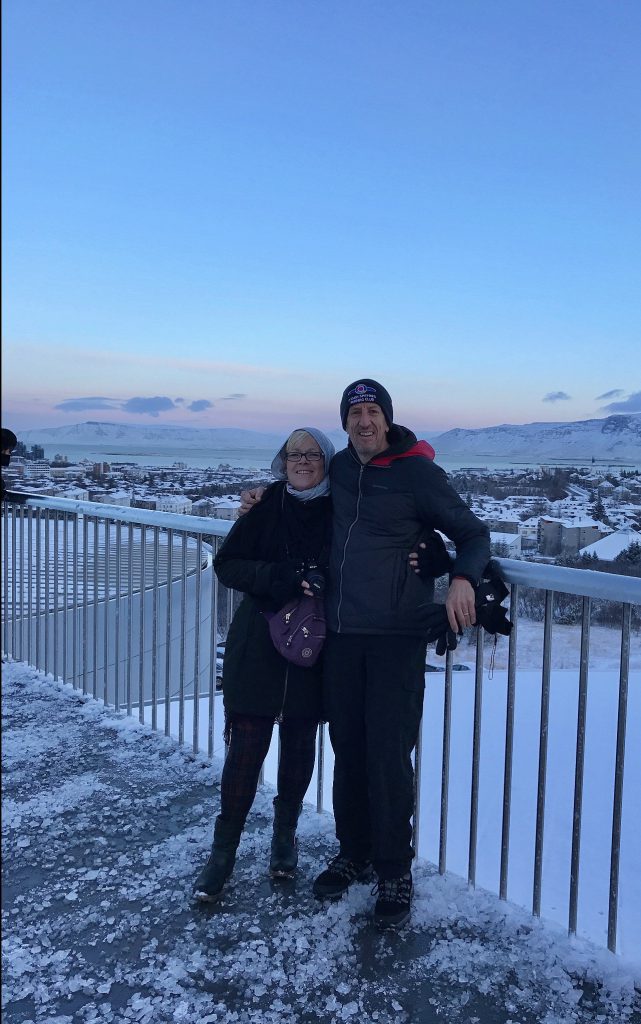 The next landmark on what seemed to be rapidly turning into a church spotting exercise was unmistakable. Even from this distance Hallgrimskirkja, standing on its hill, dominated the landscape. Yesterday I’d stood there watching the sun rising over Perlan, little knowing I’d be doing  the same in reverse today but without the sunrise of course. With all the looking out over the city we were in grave danger of missing the most impressive sight of all. The dome of Perlan, with its coat of slowly melting snow and reflections of the blue sky really did have the irredescance of a pearl. While we’d been inside drinking our coffee I’d seen several people taking photographs of the windows. At the time I’d wondered why but now I understood. From the inside looking out they had seemed like ordinary windows but, from the outside they are more like mirrors. 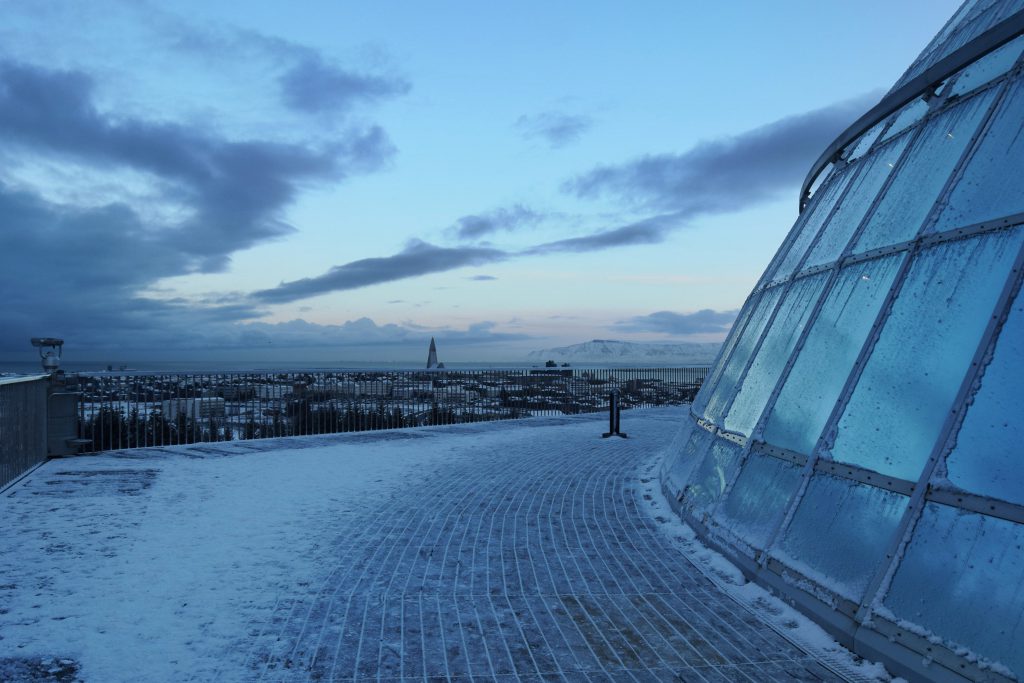 Later, when I looked back at the pictures we took of each other against the icy glass our black clothes against the blue white background reminded me of the Beatles film Help. If I’d realised at the time I’d have made Commando pose semaphore style. 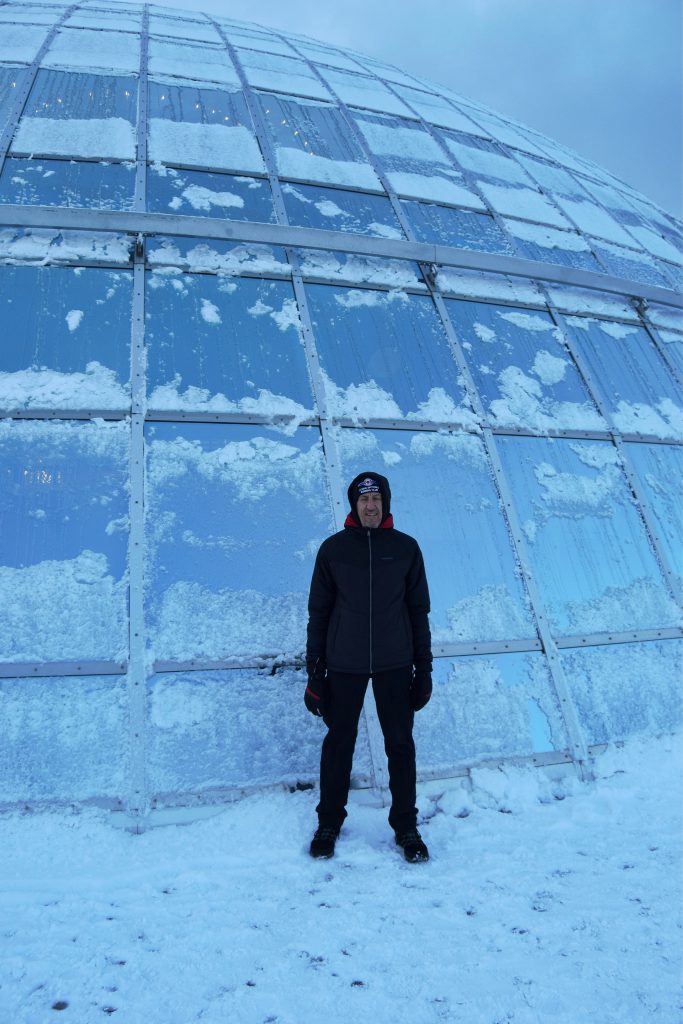 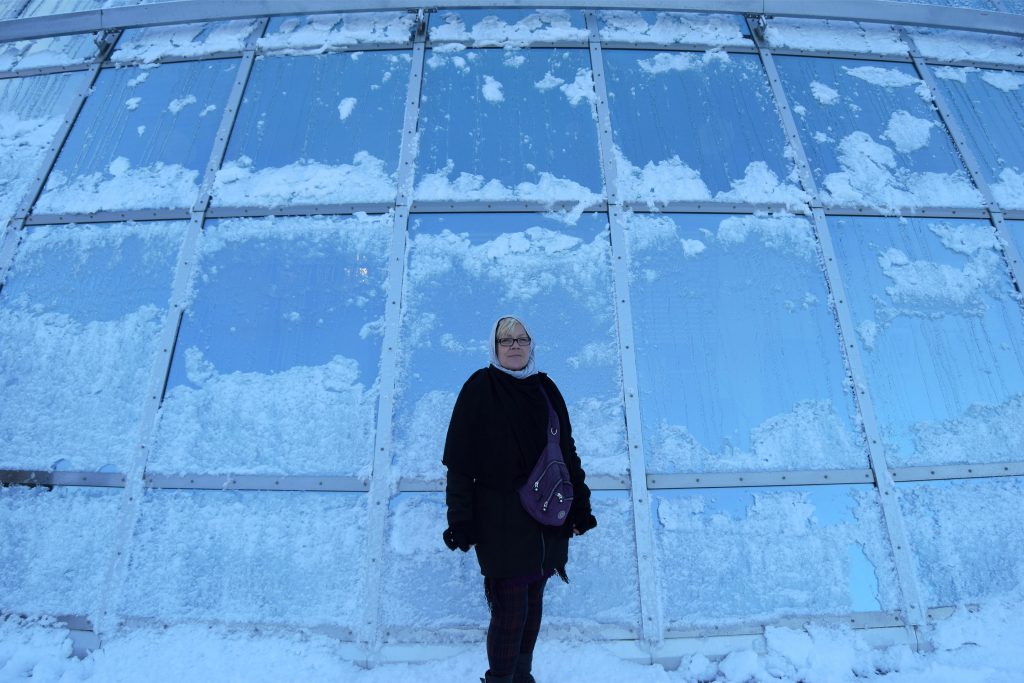 Our walk around the outside of the sparkling dome was coming to an end. Pretty soon we were looking out towards the airport runway again. Commando pointed out our hotel, far closer than I’d expected after the trudge through the snow to get here. The clouds on the horizon seemed to be getting darker and the path we’d taken from the woodland reminded us that we had a long steep walk ahead of us. Much as we’d have liked to linger, attempting the descent in a blizzard with fading light didn’t seem a wise move. With a few last photos of the view and the icy dome, we went back inside. 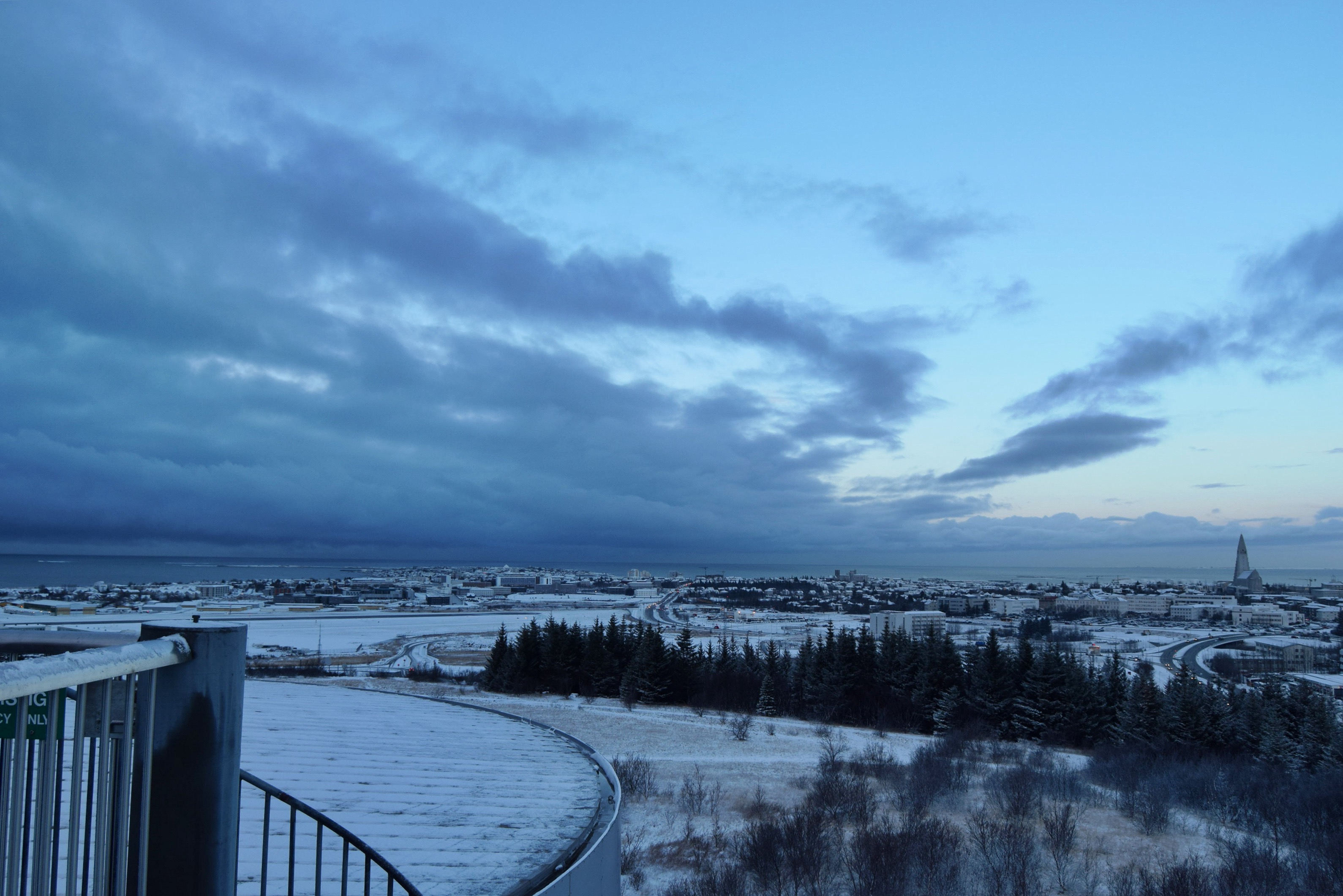 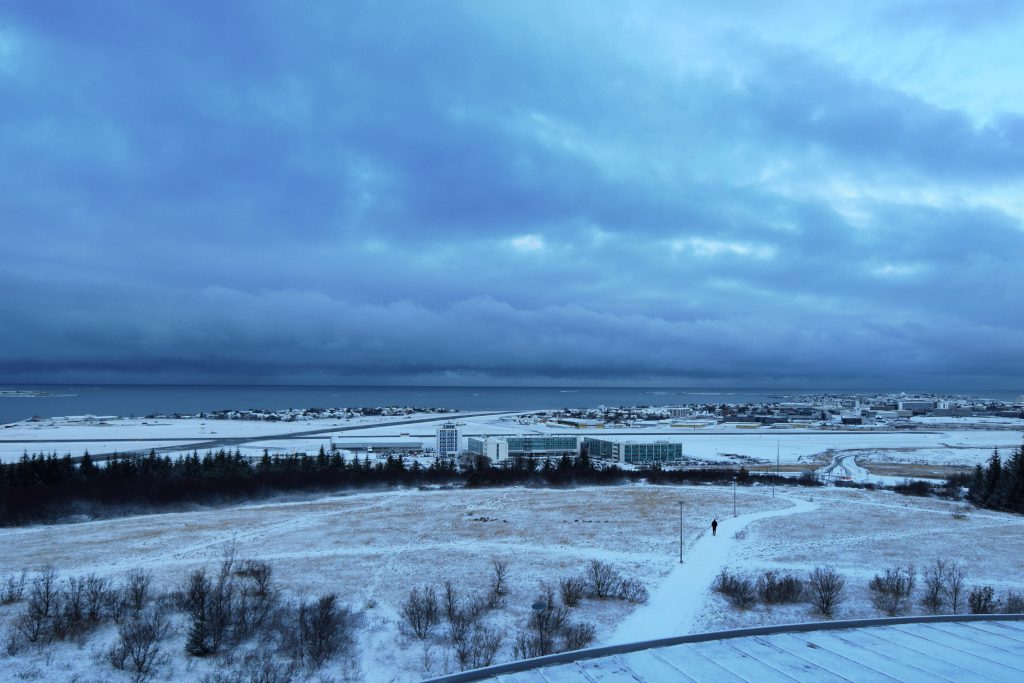 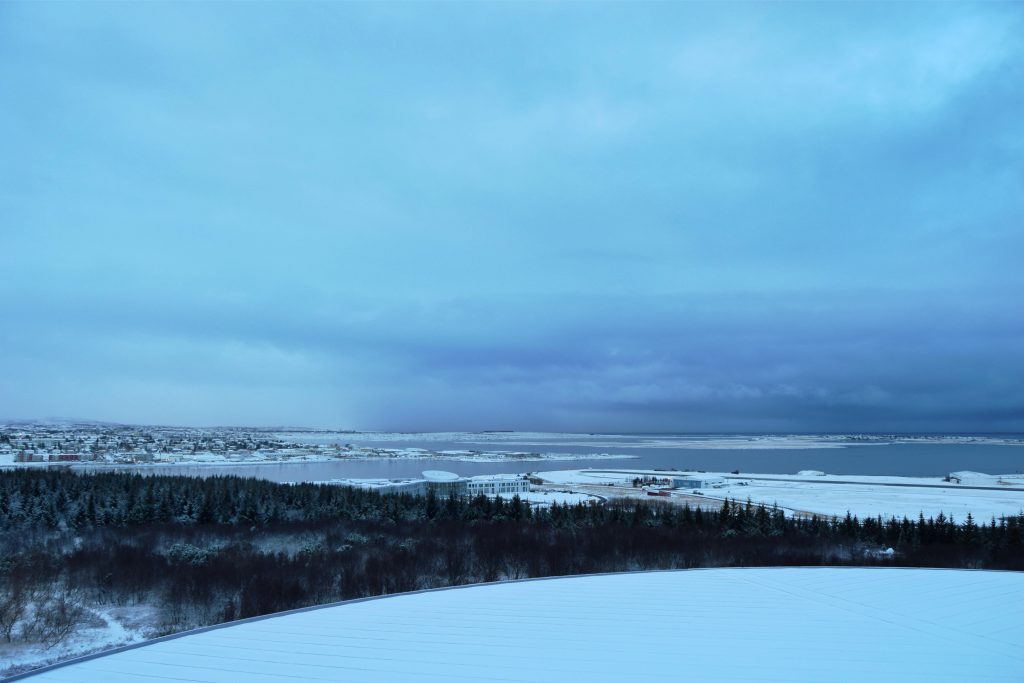 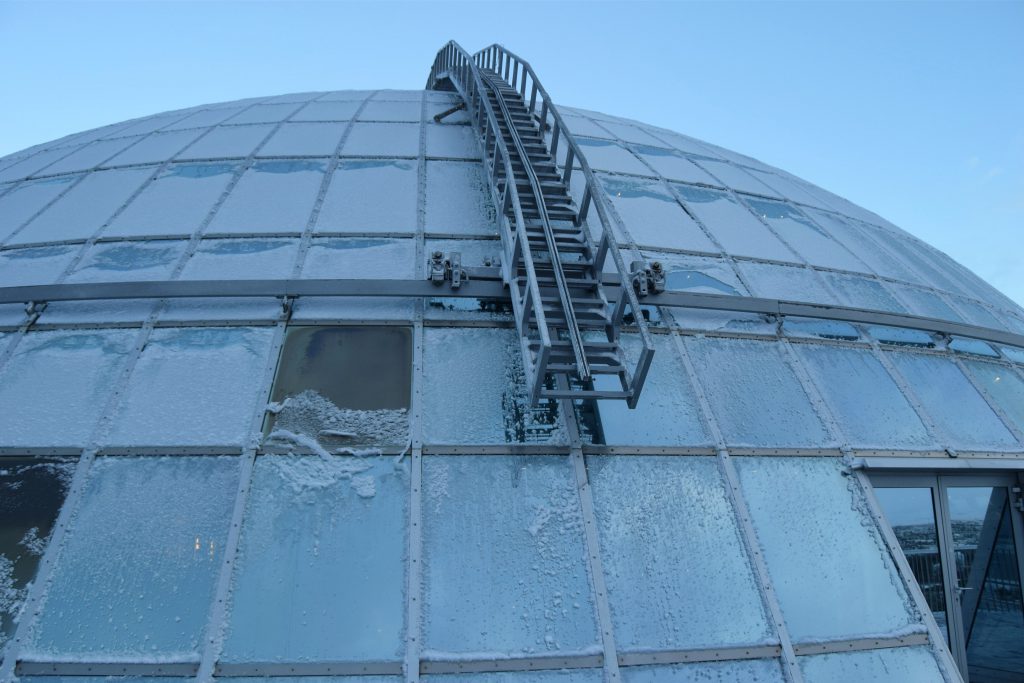 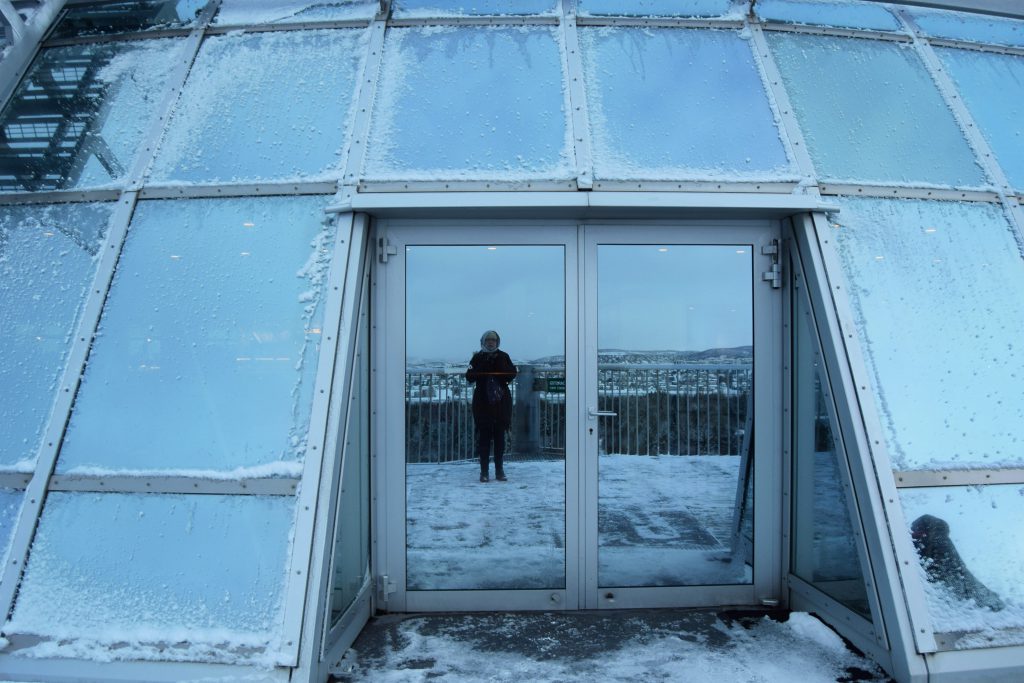 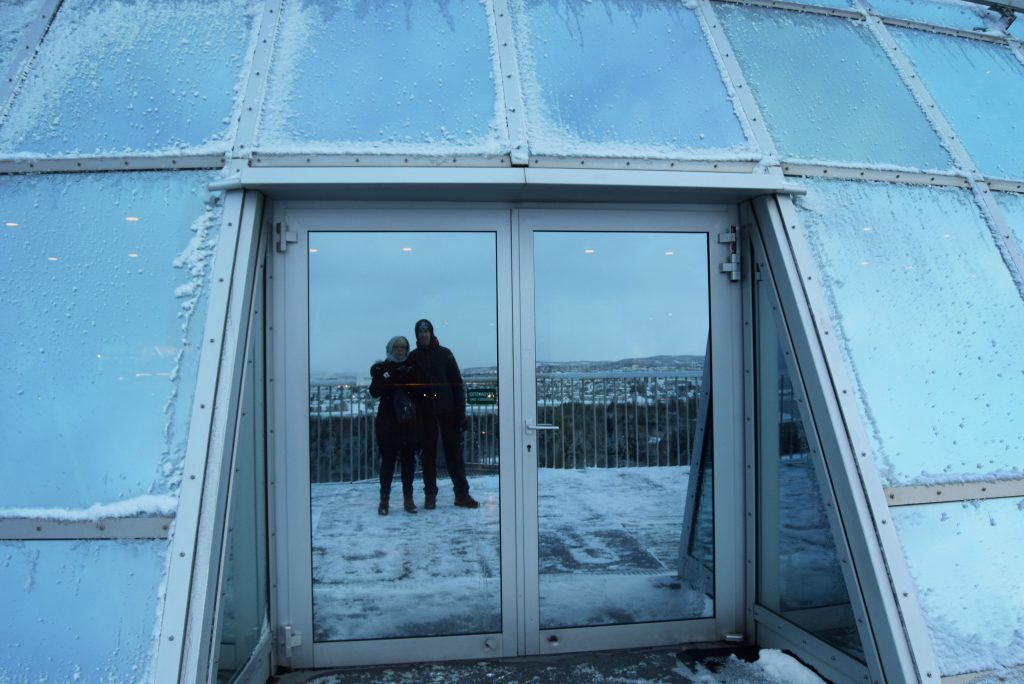 Before we left there was one more thing we really couldn’t miss. As we walked down the stairs we were looking directly into the pool with the artificial geyser. It was filled with coins, sparkling like specks of gold. The pool was in the basement of the building and, hoping to catch a glimpse of it erupting, we went down for a closer look. 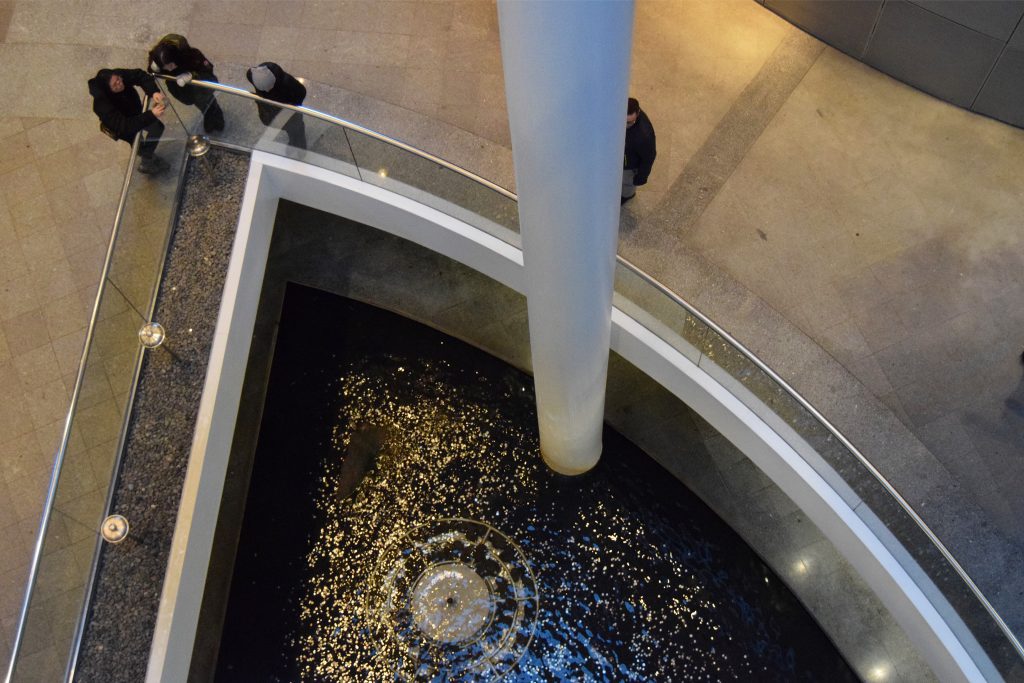 The small space was lined with pictures of the Icelandic landscape. We walked along the curved edge of the pool admiring them and the way they reflected in the dark water. Commando bent and put his hand in the pool, surprised to find it was icy cold. We waited and waited but the pipe in the centre of the pool obstinately refused to spurt water, no matter how hard we stared at it. 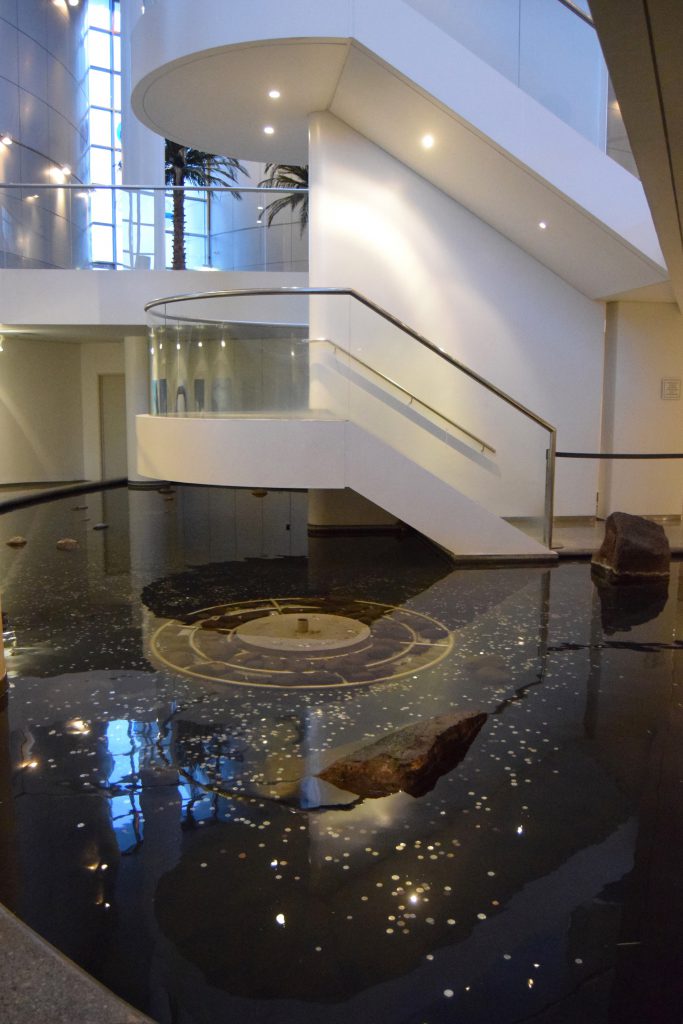 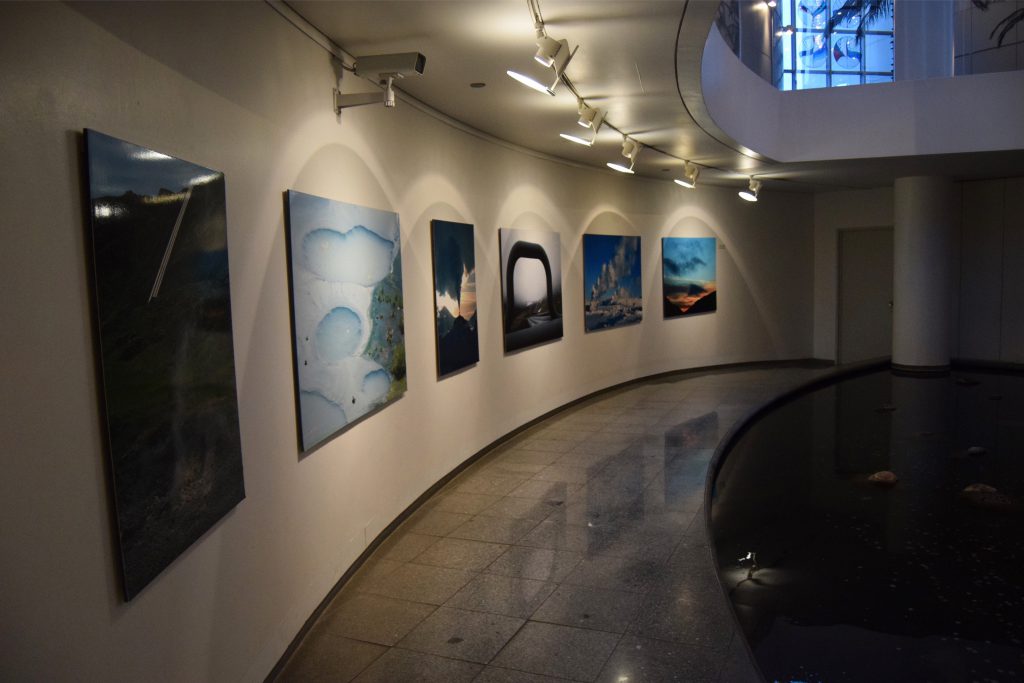 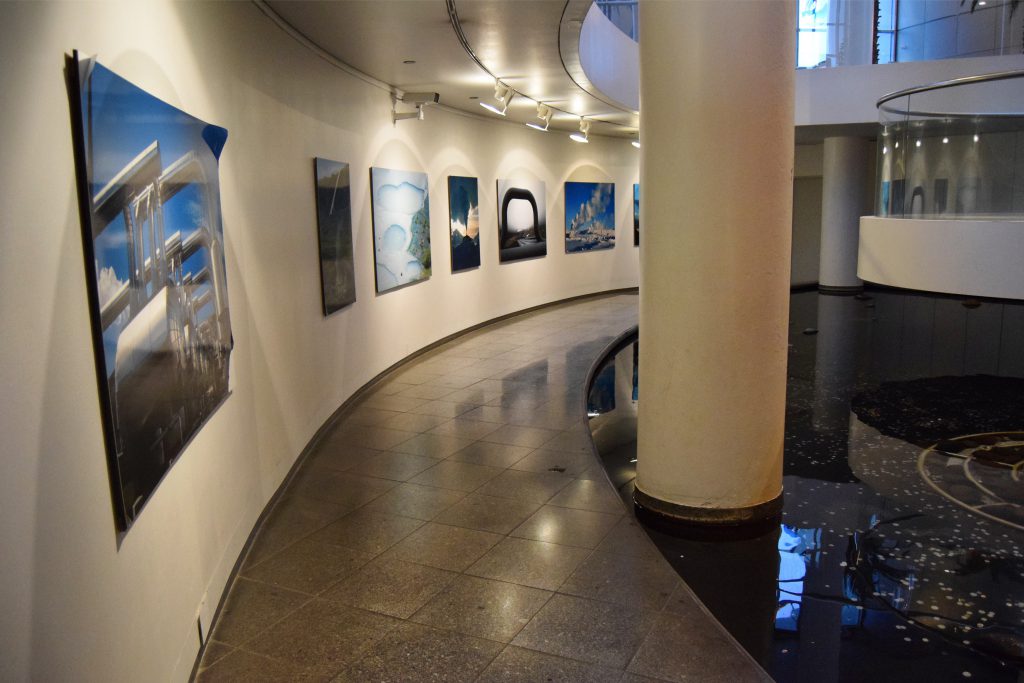 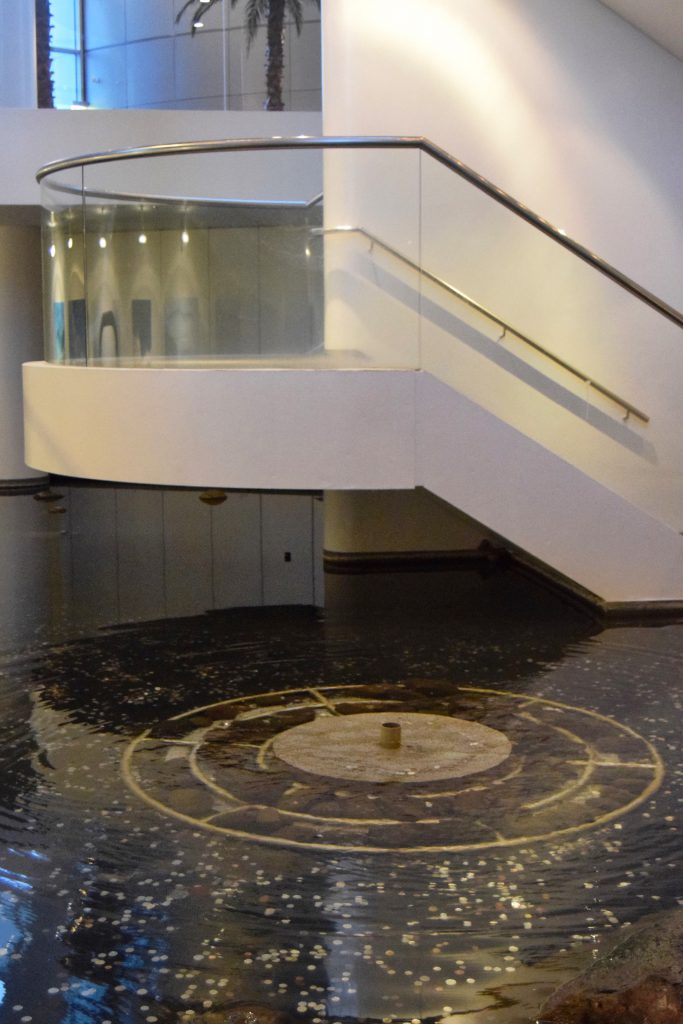 Then, just as we were about to give up and climb the stairs again, the water began to gush. It may not have been a real geyser like the ones in the hot springs of the Golden Circle, but we had no time to visit them and this at least gave us a taste. 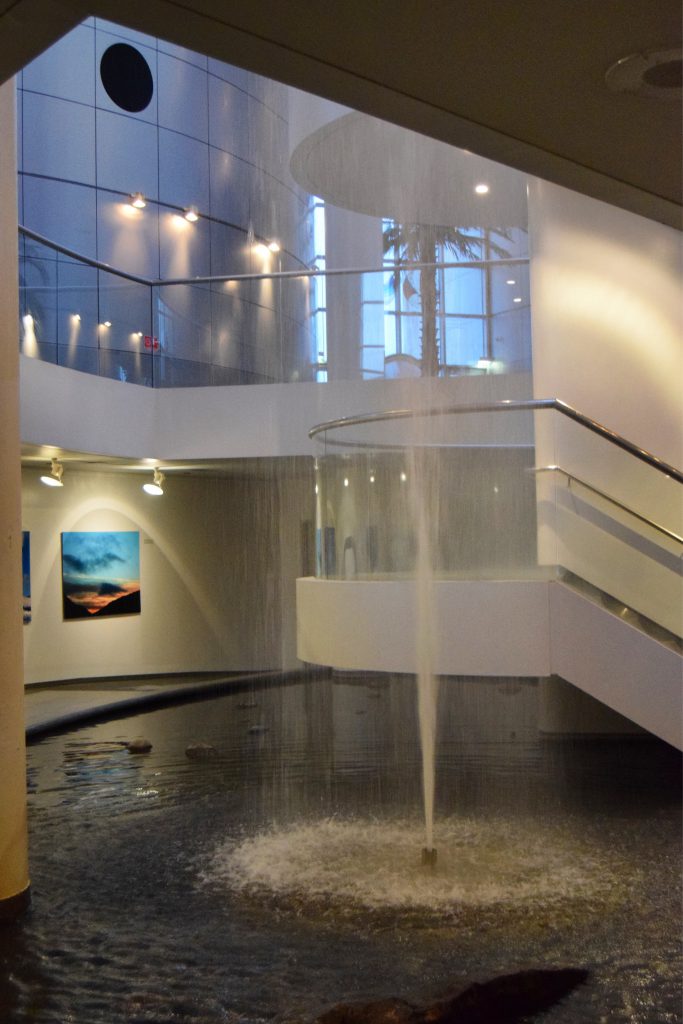 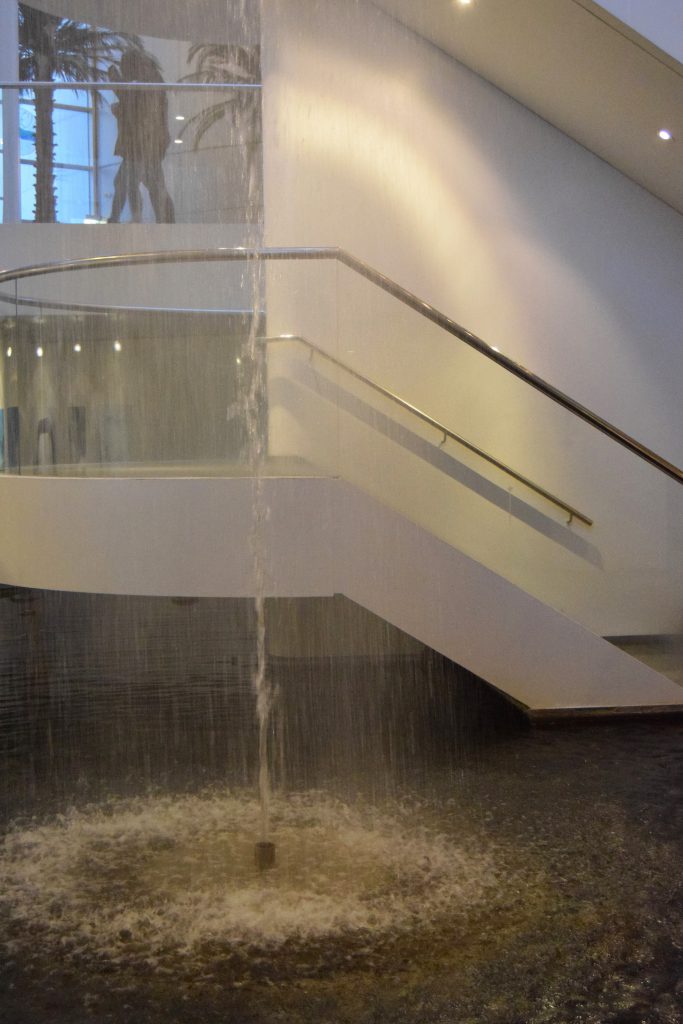 Now it really was time to leave. Somehow I thought the walk down the hill was going to be far tougher than the walk up.