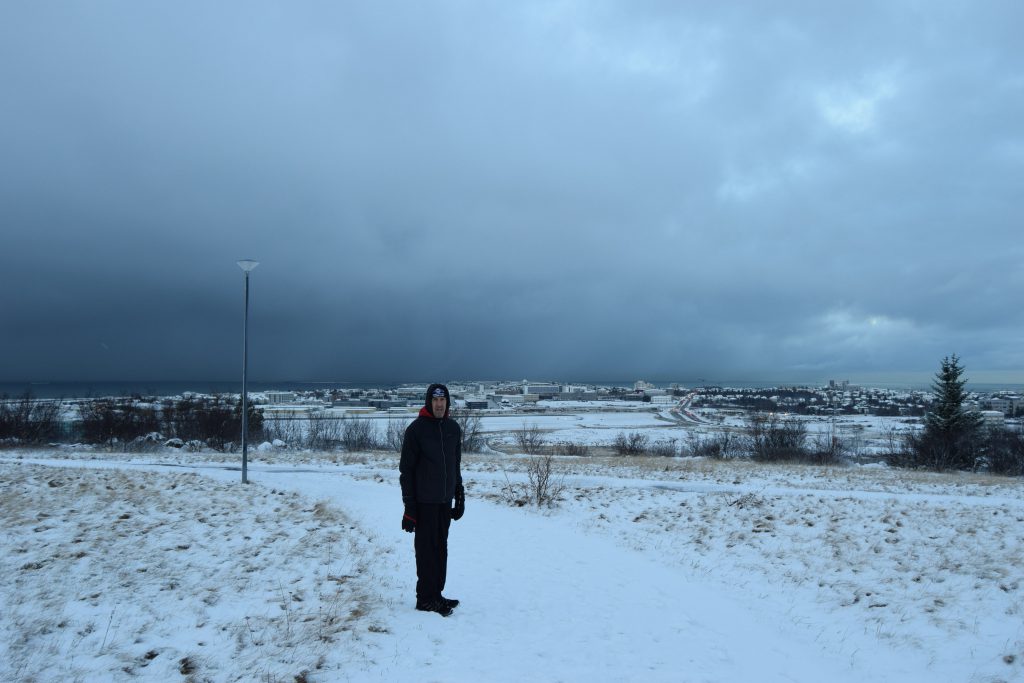 By the time we had our feet on the snowy ground once more clouds had moved in covering every last vestige of blue. In Iceland it seems the weather can change in a moment. Those clouds seem to spring up from nowhere and disappear again as quickly. Sadly these didn’t look like disappearing any time soon. An inky blackness hung over the woodland trail making me sure snow would soon follow. Gingerly we crunched our way along the trail towards the trees. Sure enough, a few flakes began to fall.

At the point where the trail began to get steep there was a small side trail with a wonderful view of Hallgrímskirkja. A single set of fresh footprints told us we might find an easier way down this way so, at the risk of getting lost, we followed them. The footprints led us along the narrow track between boulder strewn scrub and spiky, snow covered grass. As there were none coming back we reasoned we’d either find a way down or someone else further along the track, hopefully someone who knew where they were going. After a few minutes of walking we came to a fork in the trail one way leading downwards into the trees, the other up towards the main path, just visible in the distance.  Mysteriously, the footprints we’d been following stopped dead at this point. We looked at each other then at the last two footprints, right at the junction of the trails.
“Which way did they go?” I asked. “They can’t just have disappeared can they?”
We looked along both trails but there were no more footprints ahead and none going back either. It was as if whoever made them had just vanished.
“Perhaps it was a troll or an elf,” Commando laughed, “or someone playing a trick.”
“But how? They can’t just have flown away.”
Feeling a little nervous, we looked over the steep drop beside the trail, half expecting to see a crumpled body, but there was nothing and no way anyone could have got down that way. The trails in both directions were nothing but smooth snow and the twigs and scrub looked undisturbed and far too thick for someone to have clambered across, besides, the snowy covering was unmarked. Perhaps we’d really been following one of Iceland’s famous huldrefolk? Elves, I’m told, can walk on top of snow and leave no footprints. 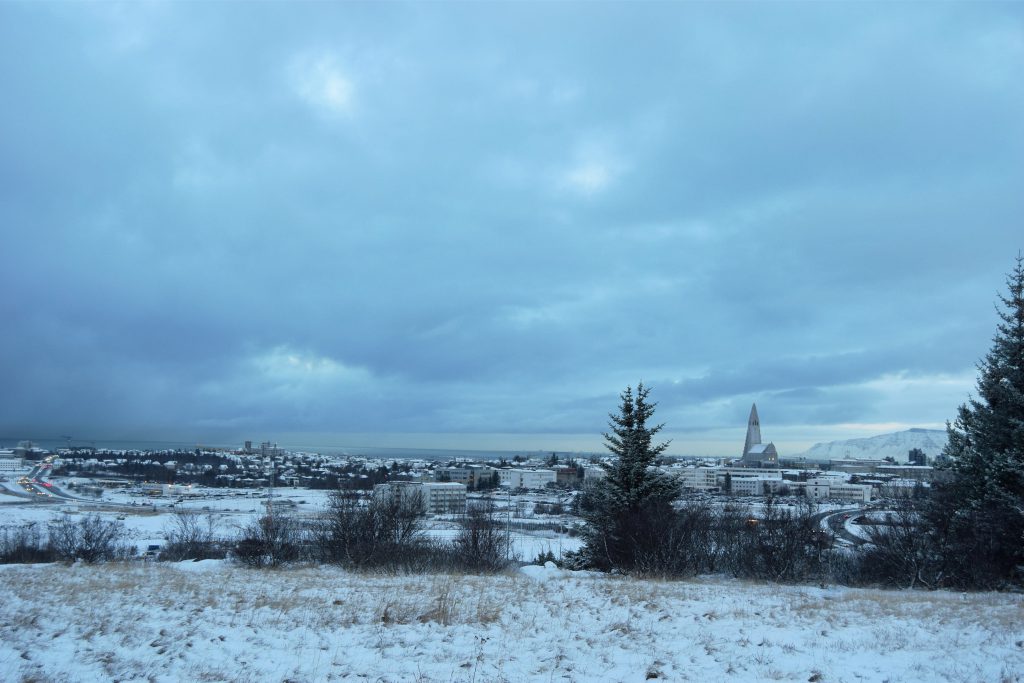 In the end, afraid to keep going down into the trees with no prints to guide us, we headed back to the main trail, still puzzling over the footprints to nowhere. It was slow going, with more than a little slipping even with the Yaktracks, but we made it to the bottom in one piece without seeing another soul. If there was a troll hidden somewhere in the woods trying to lure unsuspecting tourists to their doom we escaped him. With the snow now falling lightly, we headed towards civilisation following  a quiet road through what looked like a small industrial estate, back to the main road. By the time we’d crossed, the light snow was turning into something more blizzard like but, more by luck than judgement, we soon saw Hallgrímskirkja ahead. 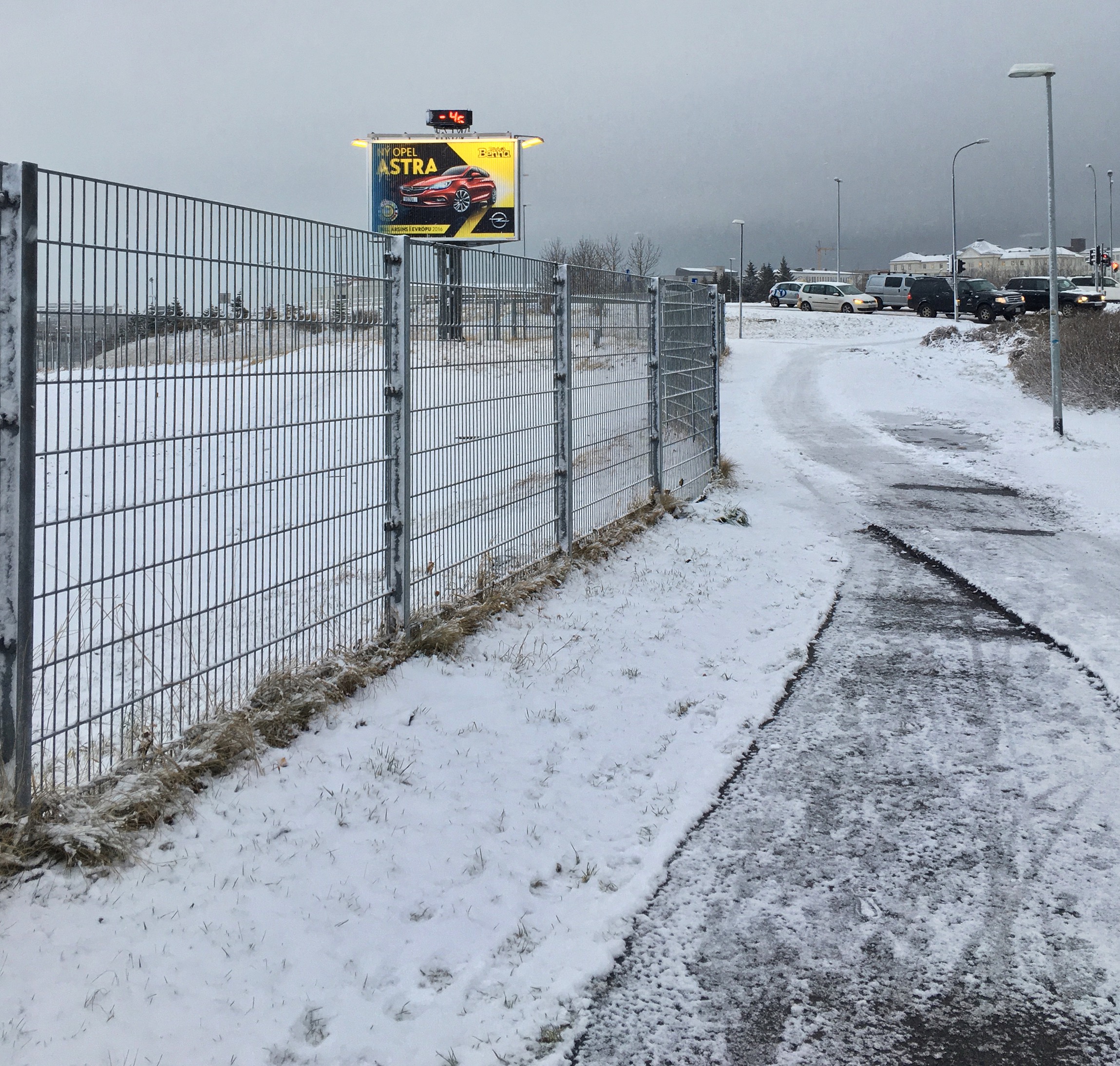 Today the Hallgrímskirkja doors were open wide and, more to get out of the weather than anything, we went inside. After the heavily decorated church interiors in Cyprus just a few weeks ago this could almost have been called austere. It may have been a somewhat stark contrast but I couldn’t help admiring the white vaulted ceiling and the arches with their plain glass windows. Two Christmas trees decorated with white lights and topped with stars flanked the minimalist pulpit and rows of pews with softly padded seats looked like a comfortable place to sit in contemplation. 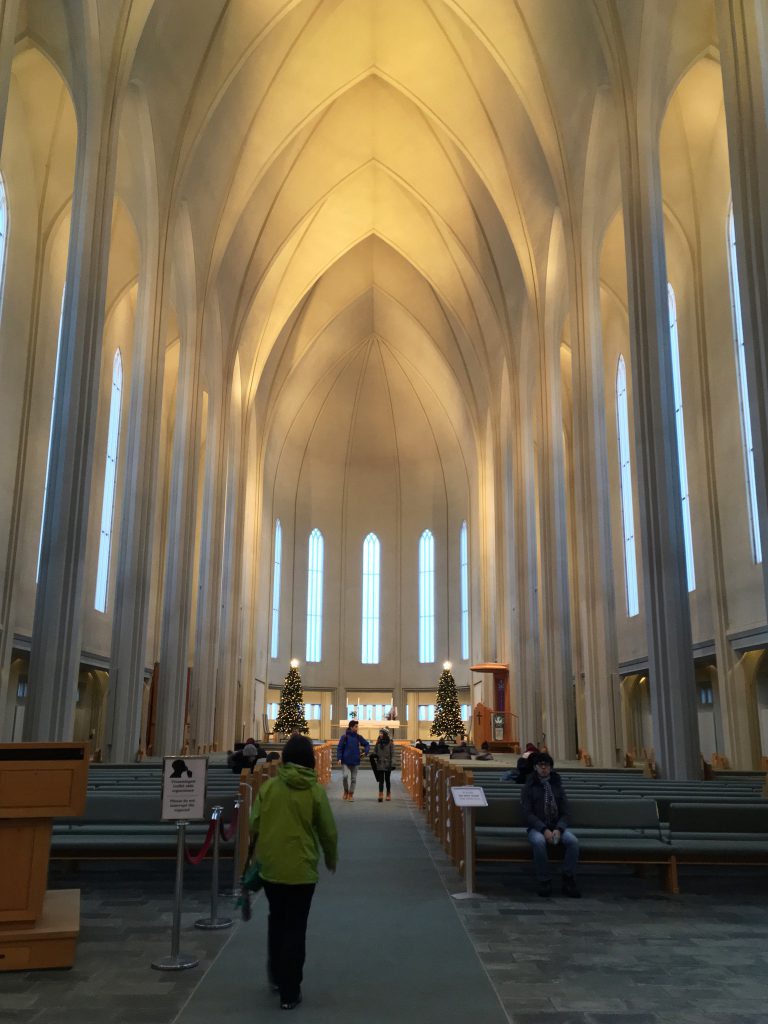 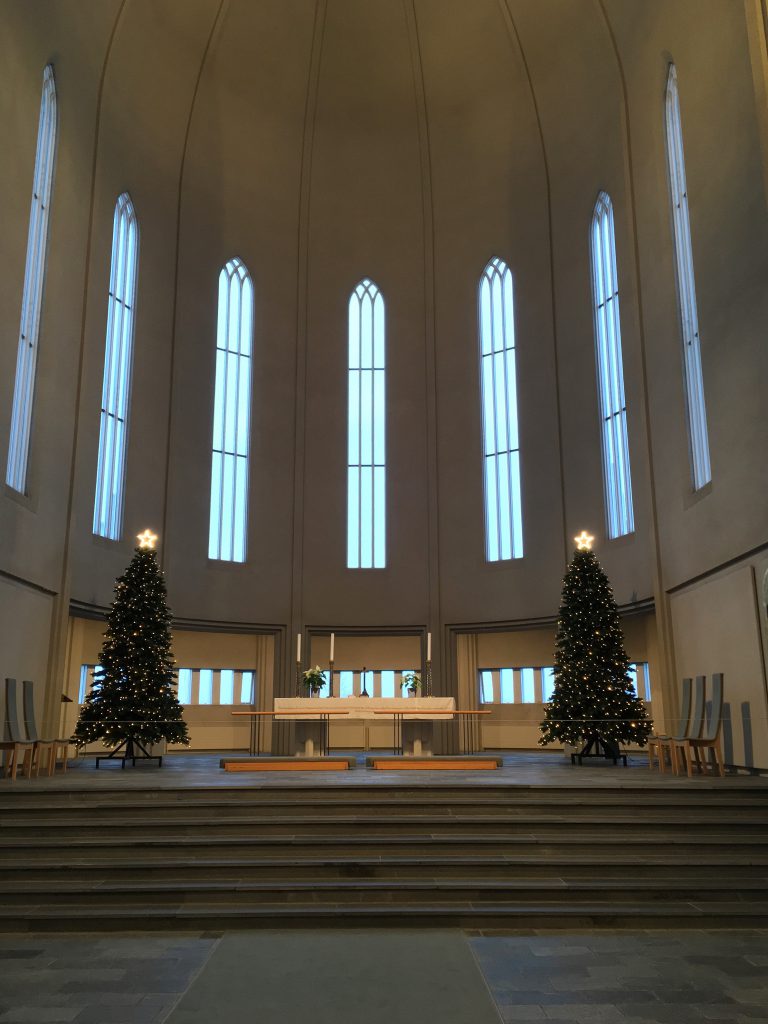 Looking back, the church was dominated by the polished pipes of the gigantic organ that seemed to echo the shape of this unusual building. Built in 1992 by Johannes Klais of Bonn, it is fifteen metres tall, weighs twenty five thousand tons and has five thousand two hundred and seventy five pipes according to Wikipedia, although I didn’t stand and count them. I imagine it would sound wonderful. 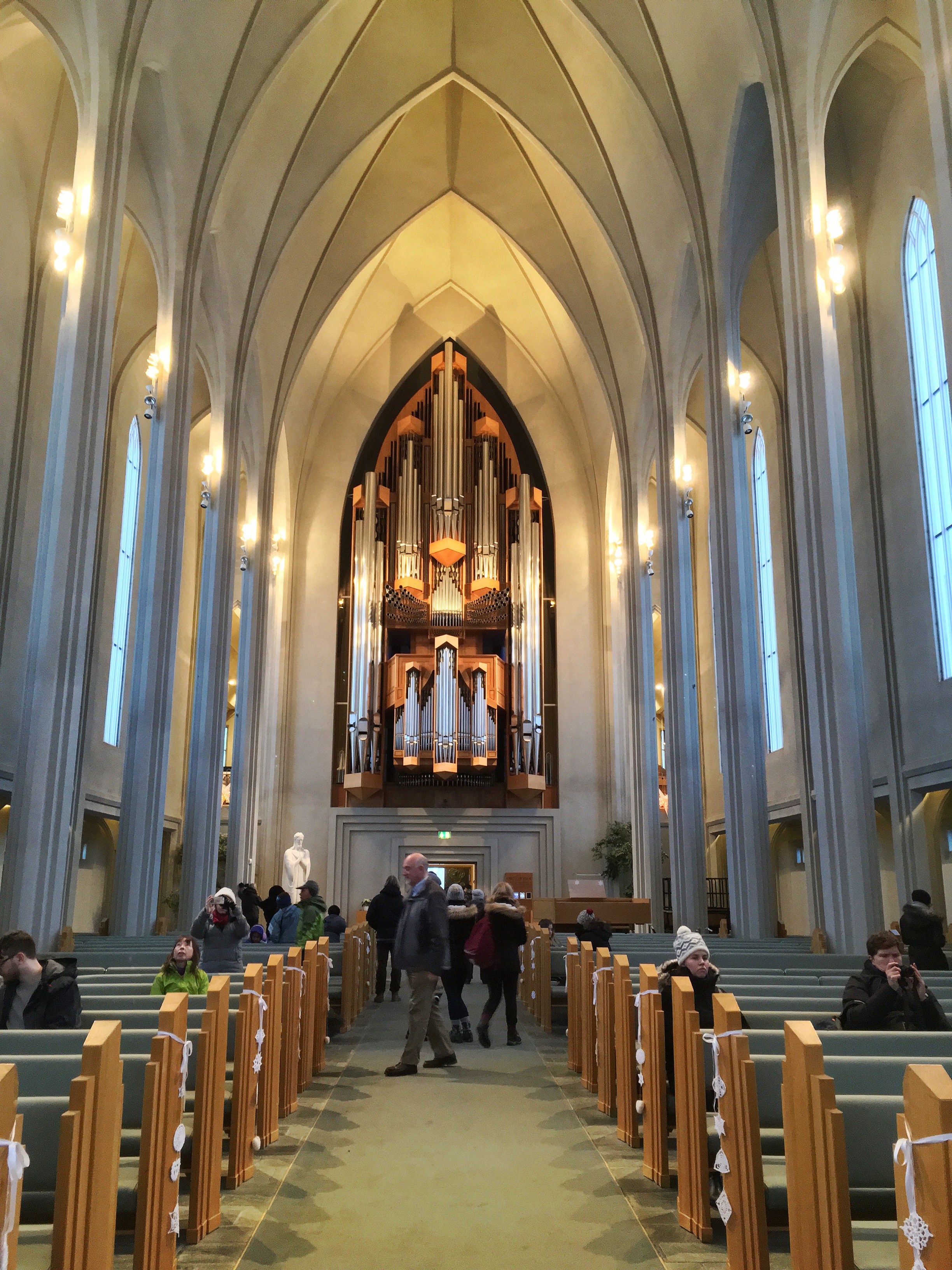 The interior of the building may have been plain but anyone who looked carefully would find little gems, like the crocheted snowflakes dangling from the ends of the pews, hidden in plain sight. Not quite all the windows were clear glass either. Half concealed behind a large palm at the back of the church I discovered one stained glass window, a bold splash of colour against the white walls. Behind it a ring of chunky white candles stood on a wreath of pine decorated with white ribbons and baubles. 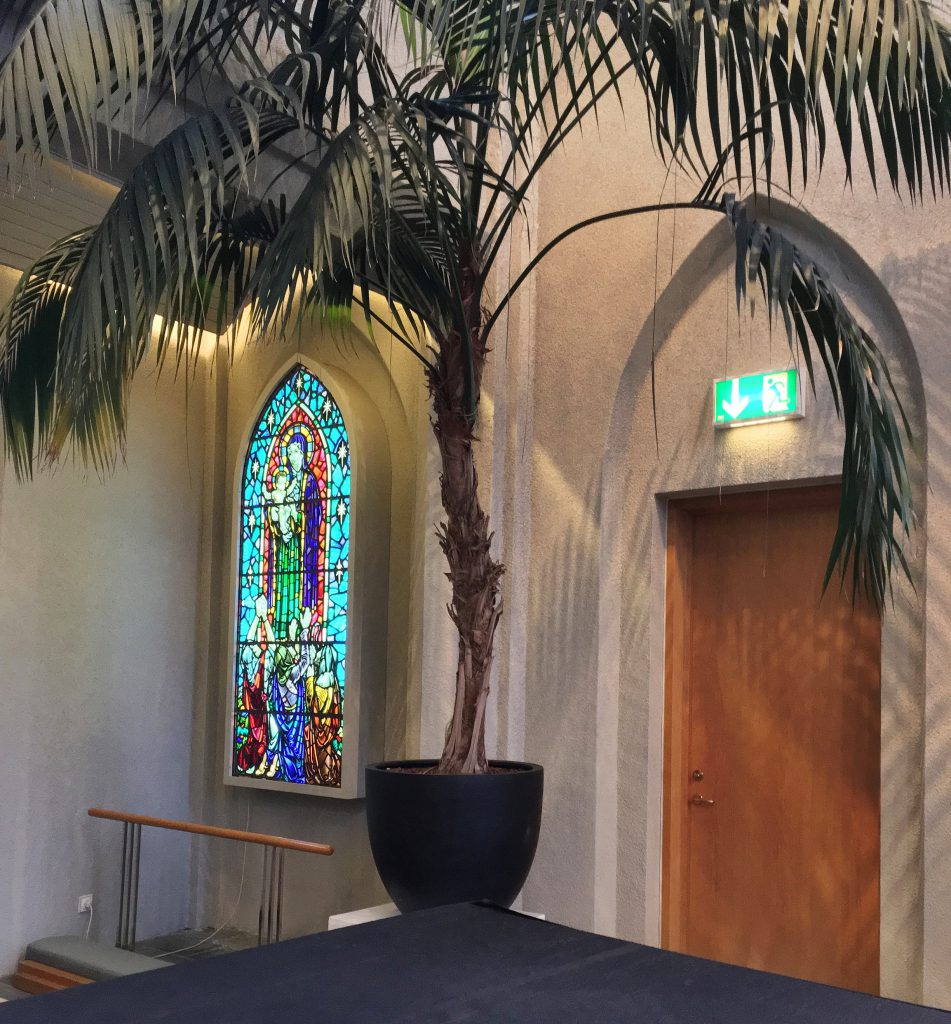 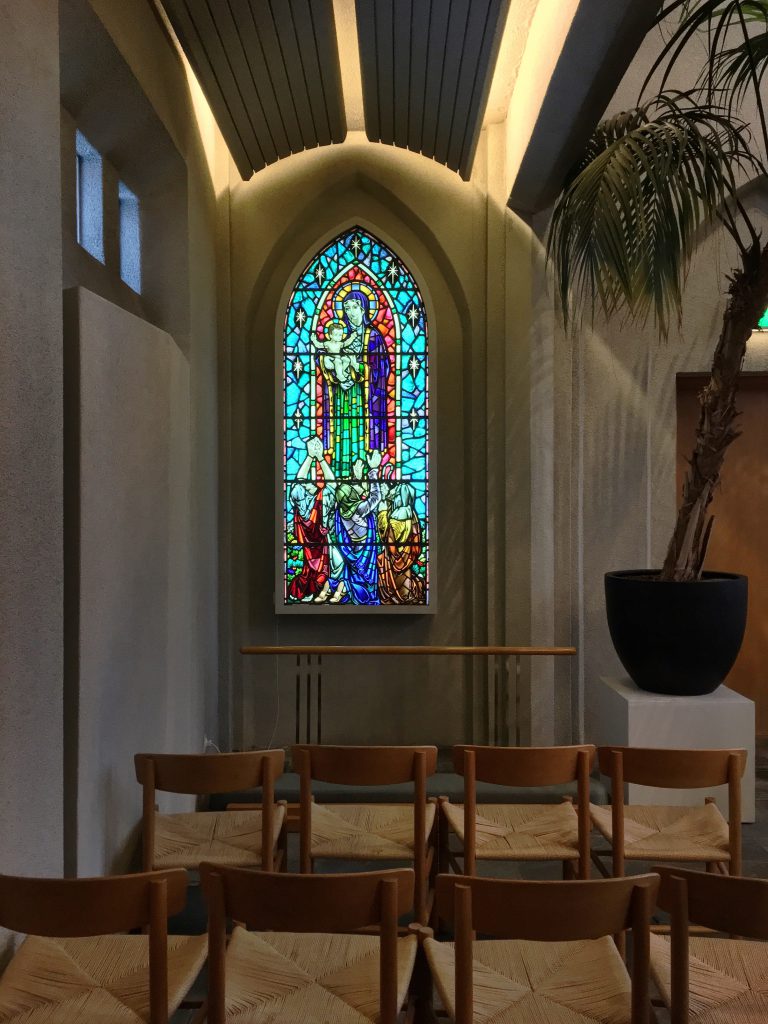 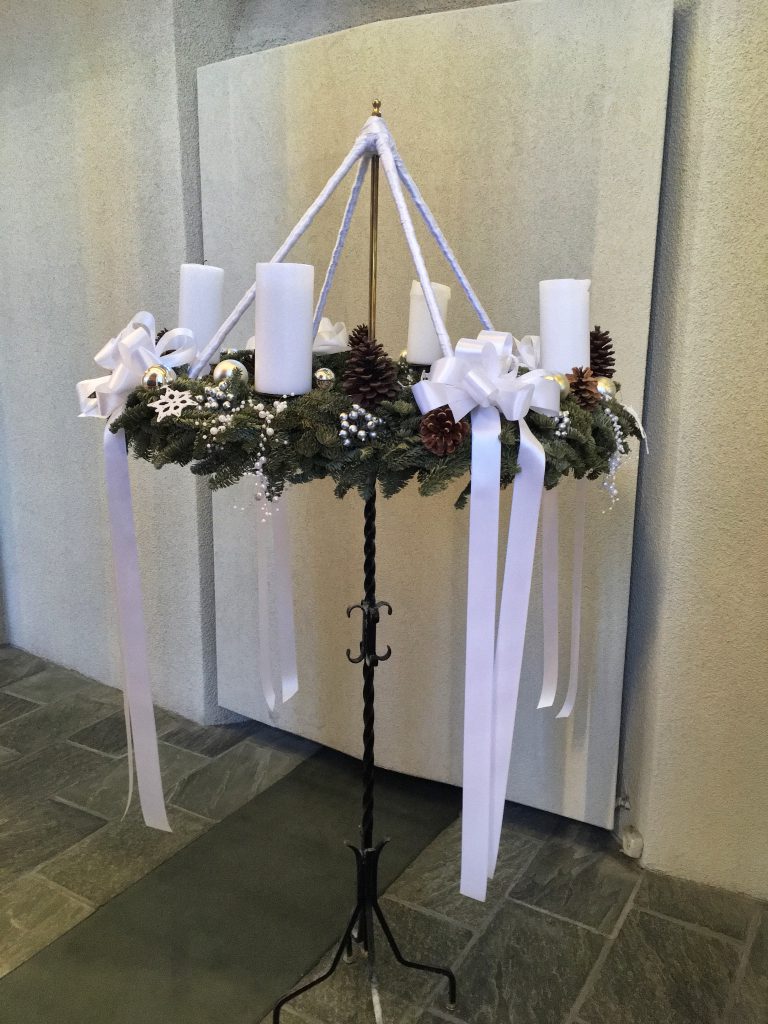 A small sculpture near the door seemed to be a cross between a tree branch and a musical instrument. It was actually entitled Marytr and was created by Sigurjon Olafsson, one of Iceland’s most famous sculptors. Close by a metal globe of candles stood beside a white marble statue of a very Nordic looking Christ. 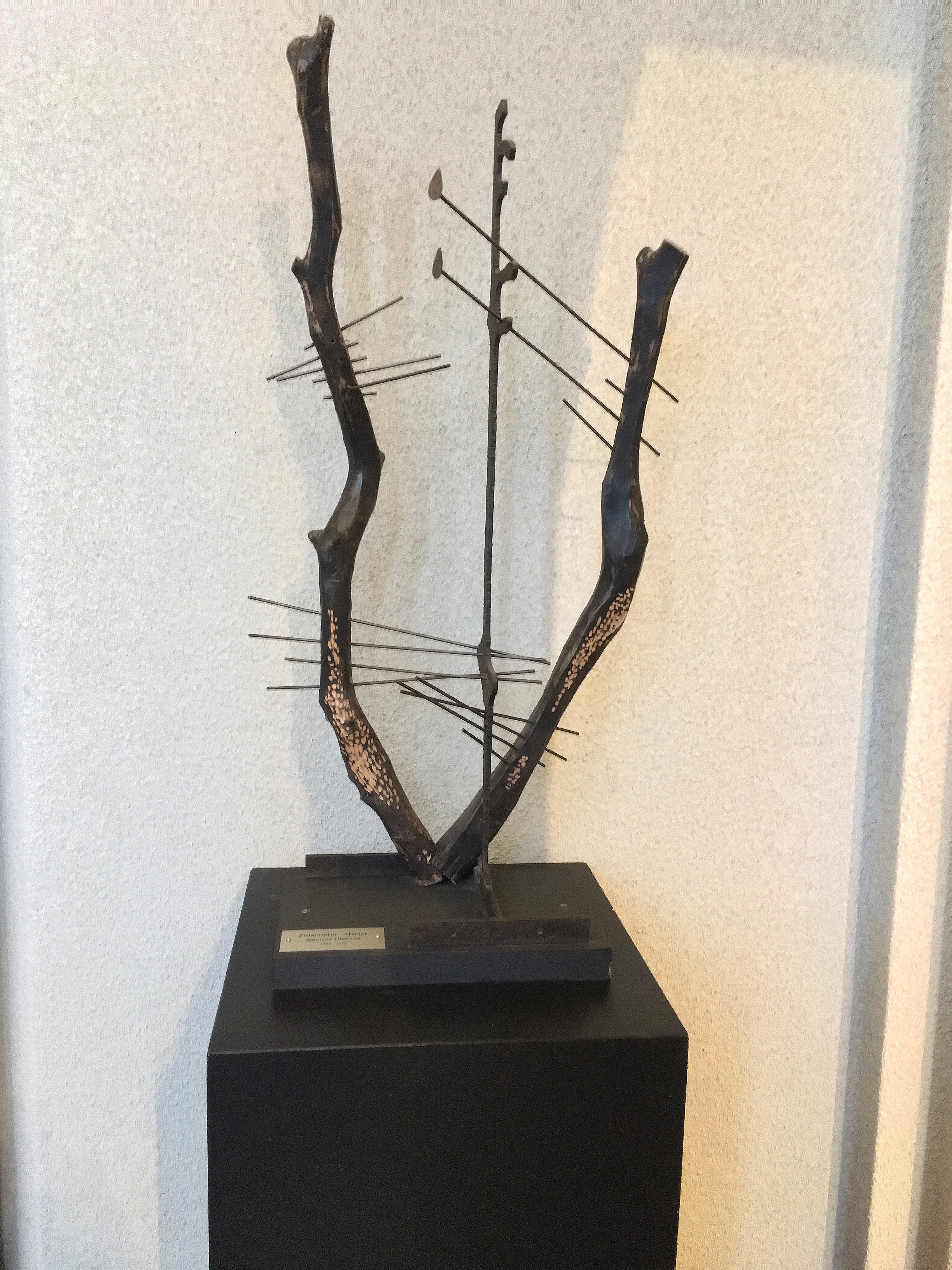 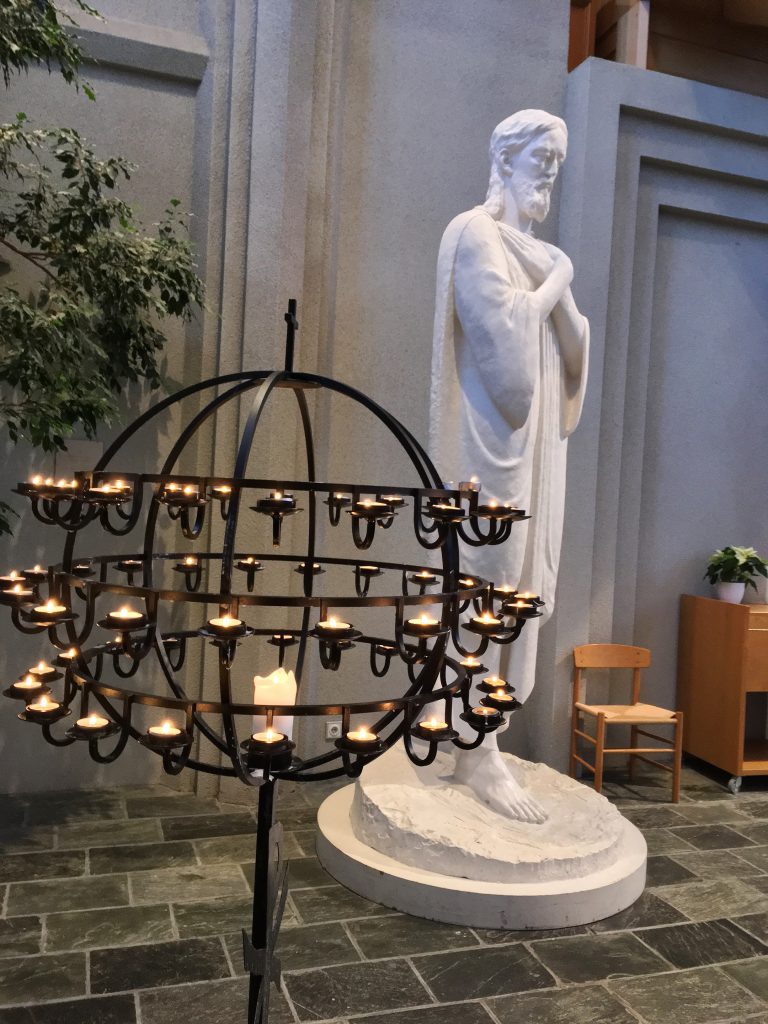 There were tours of the tower on offer to anyone who paid the admittance charge, with panoramic views of the city. This seemed a little like overkill after Perlan and, like most things in Iceland, very expensive, so we gave it a miss and headed back out into the snow. In one of the quick turnarounds we were beginning to grow used to in Iceland, the snow had actually stopped and there was blue sky overhead. Leif Eriksson was rather more snow covered than when we saw him last but he was still staring out to sea as if he had a world still to explore. 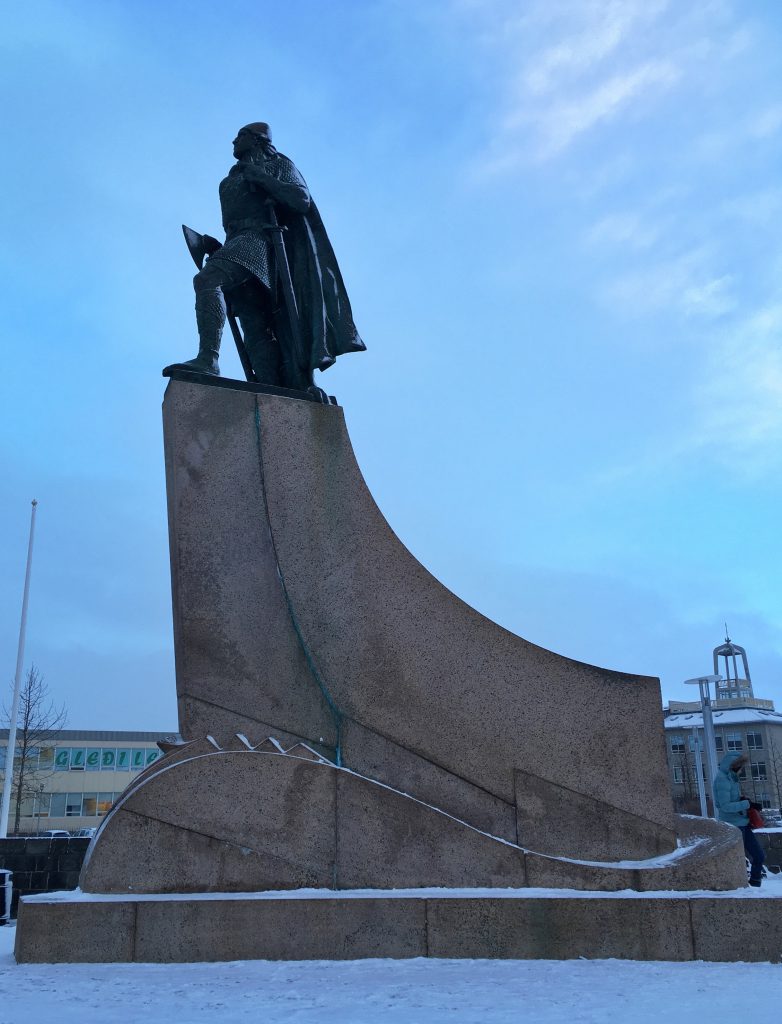 With the blue sky overhead we felt slightly more confident about our rescheduled aurora watching boat trip this evening and we headed down towards the harbour in good spirits. Along the way we stopped to admire more of the artwork that seems to be everywhere. 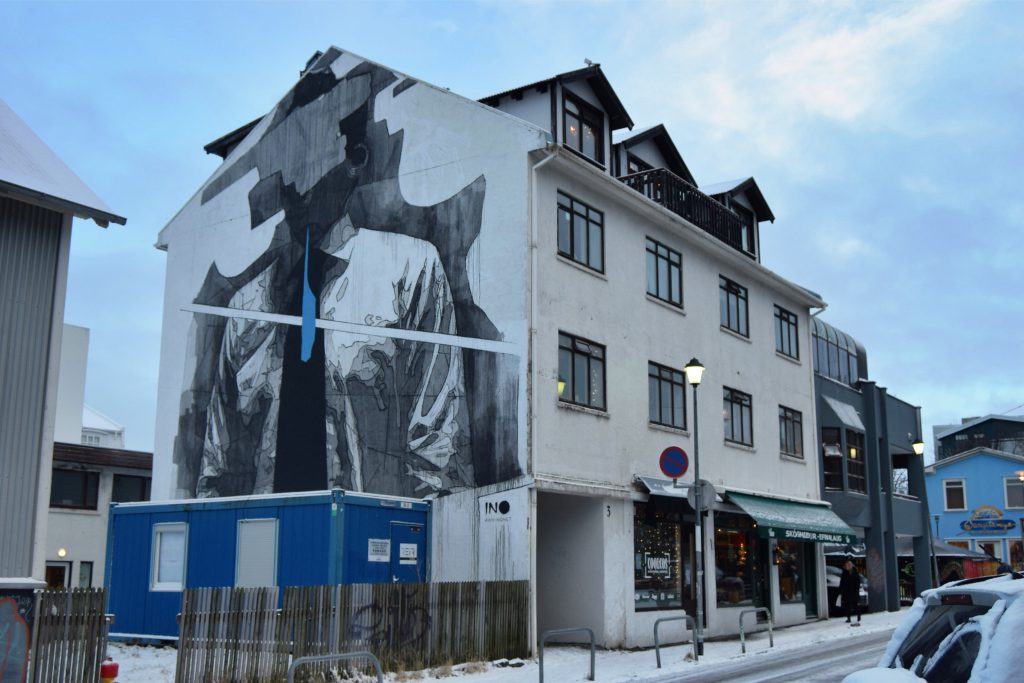 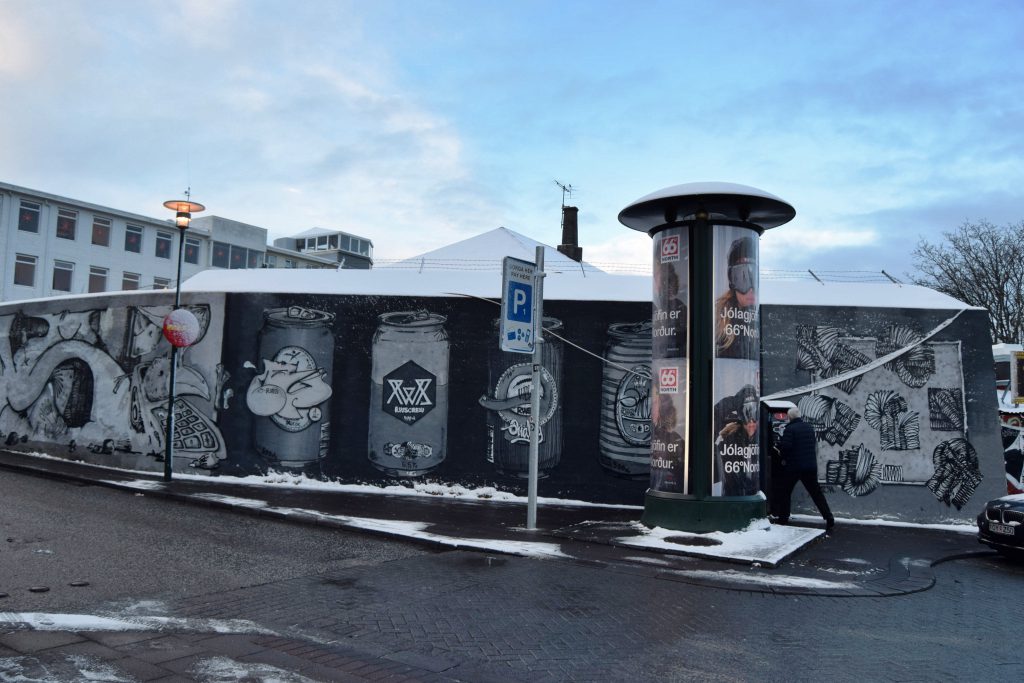 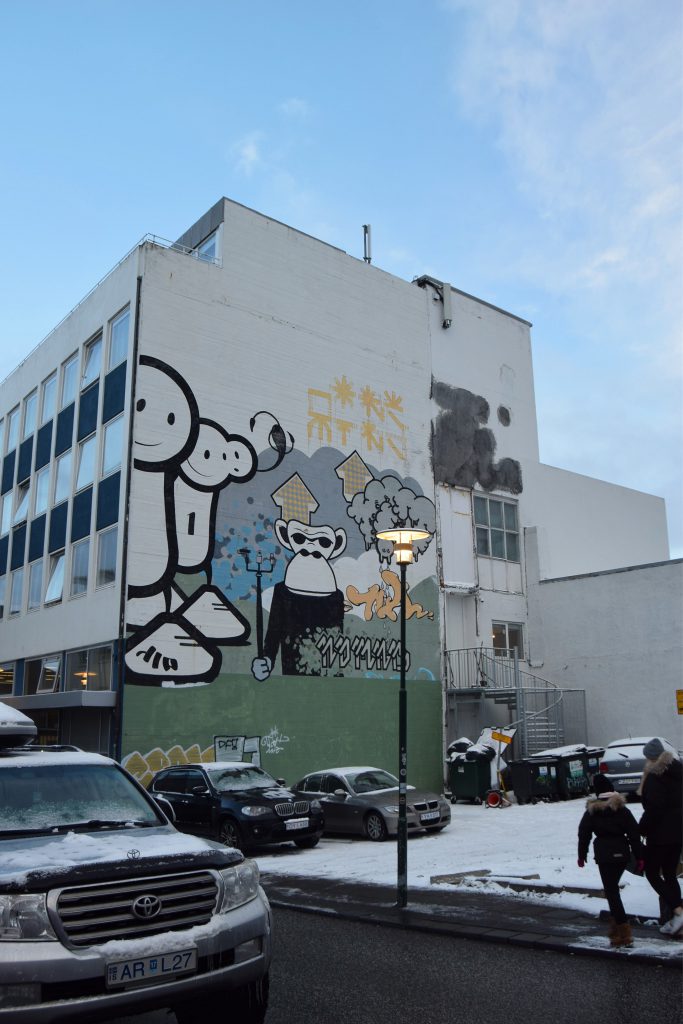 We also made a quick stop to use one of the odd, cylindrical public toilets we’d seen dotted about all over the city. Surprisingly, in a city where everything comes at a very high price, it was free. It was also rather high tech with a button to press to enter and a self cleaning process that started as soon as you left and closed the door. This particular convenience was opposite Tjornin Lake and, as I waited for Commando to take his turn I looked across the road at a few miserable looking swans swimming in a tiny circle of clear water on a lake almost completely covered by ice and snow. 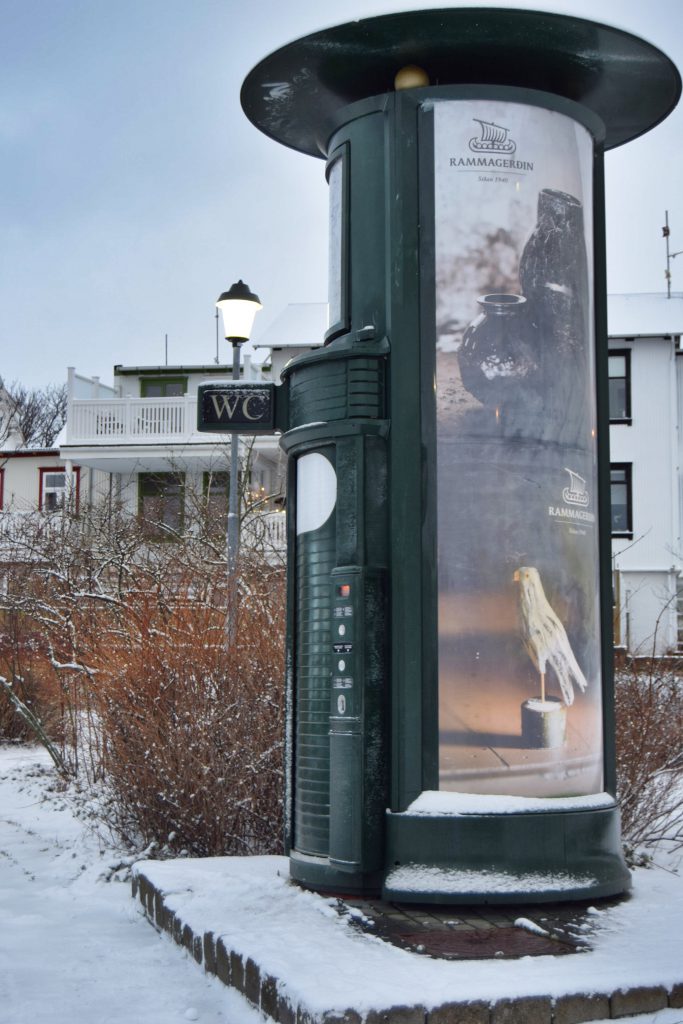 As we turned to make our way towards our next stop, Harpa, the huge concert hall and conference centre right on the waterfront, a woman stopped us.
“Is there a lake around here somewhere?” she asked.
“It’s right there,” I said, pointing in the direction she’d been looking all along, “only it’s covered with ice and snow so it doesn’t really look much like a lake right now. Yesterday it wasn’t frozen and it was a little easier to spot.”
The poor woman looked puzzled for a moment and then thanked us and set off across the road.
“She probably thought it was a park or a plaza,” Commando said.

It didn’t take long to reach Harpa. The building, designed by Danish firm, Henning Larson Architects, and Danish- Icelandic artist Olafur Eliasson, was something I wanted a closer look at. The geometric glass panel facade is inspired by the basalt landscape and seems to shimmer and change colour as you walk past. Commando, who had run past in the snow earlier, said it looked even better in the dark.

The original plans for the area included a huge hotel, luxury apartments, retail units and restaurants along with the headquarters of Icelandic bank Landsbanki but, a year after construction began, work was halted by the 2008 Icelandic banking crisis. Eventually the government agreed to fund the completion of the half built concert hall and the first concert was held in May 2011. The plans for the rest of the project were dropped. In some ways I think this was a good thing as it leaves this stunning building standing alone. 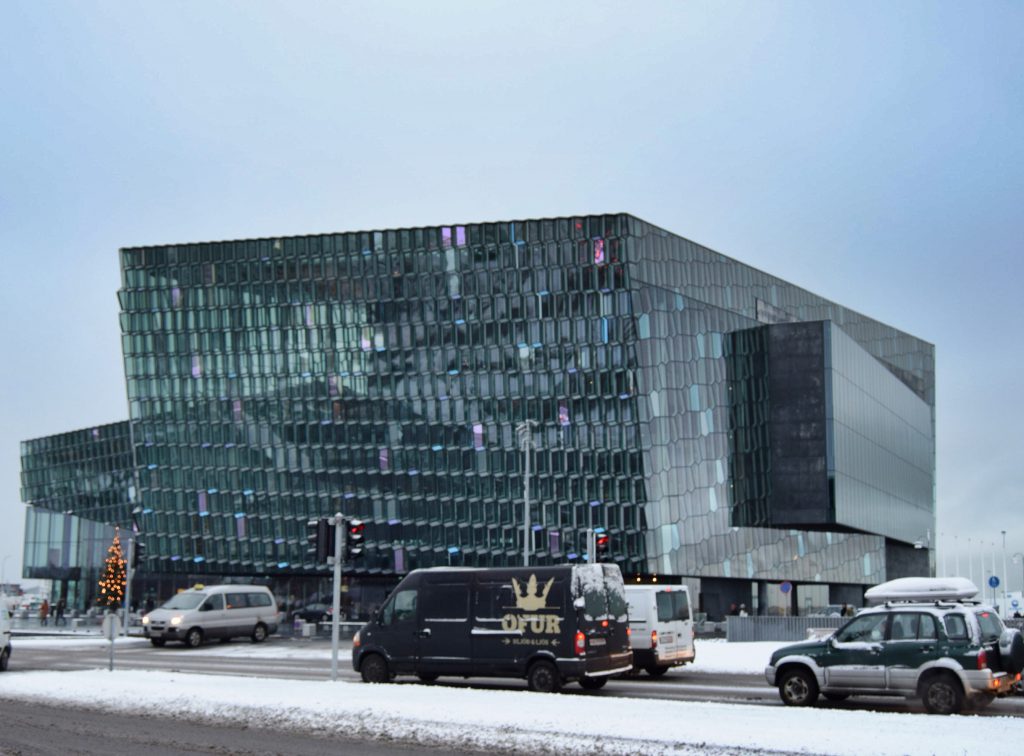 In an echo of Commando’s morning run we left Harpa behind and followed  Sæbraut, the path along the harbour front. The snow cloud was building over the sea, threatening to obliterate the mountains again, along with our hopes for the evening. We kept walking though. We’d only been in Iceland a short while but already snow and blizzards were losing their power to frighten us. Besides, there were things Commando wanted to show me. 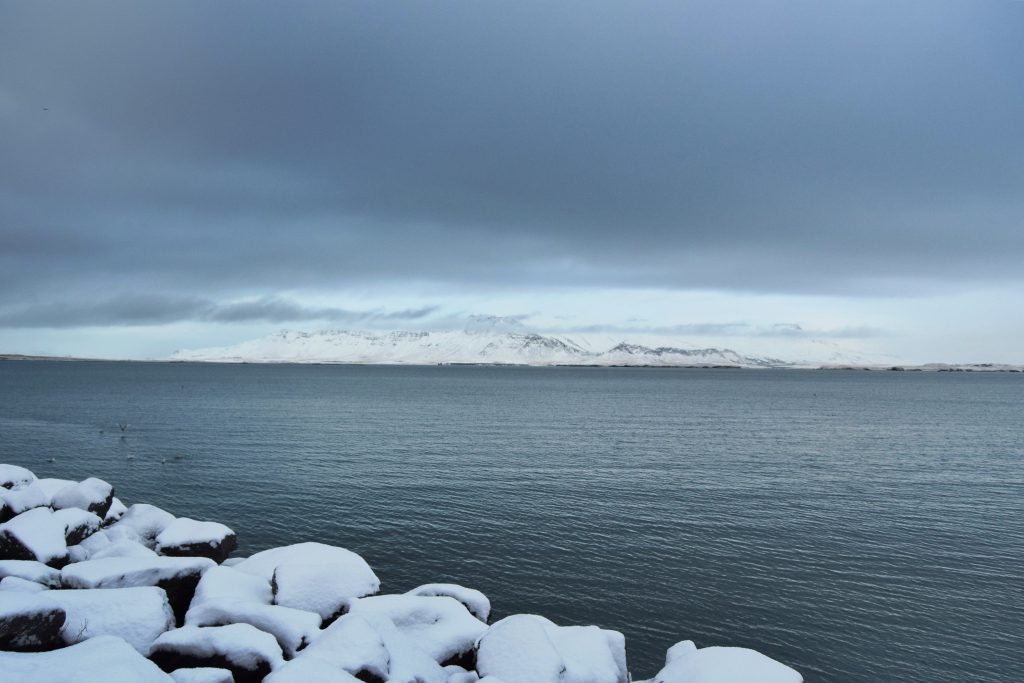 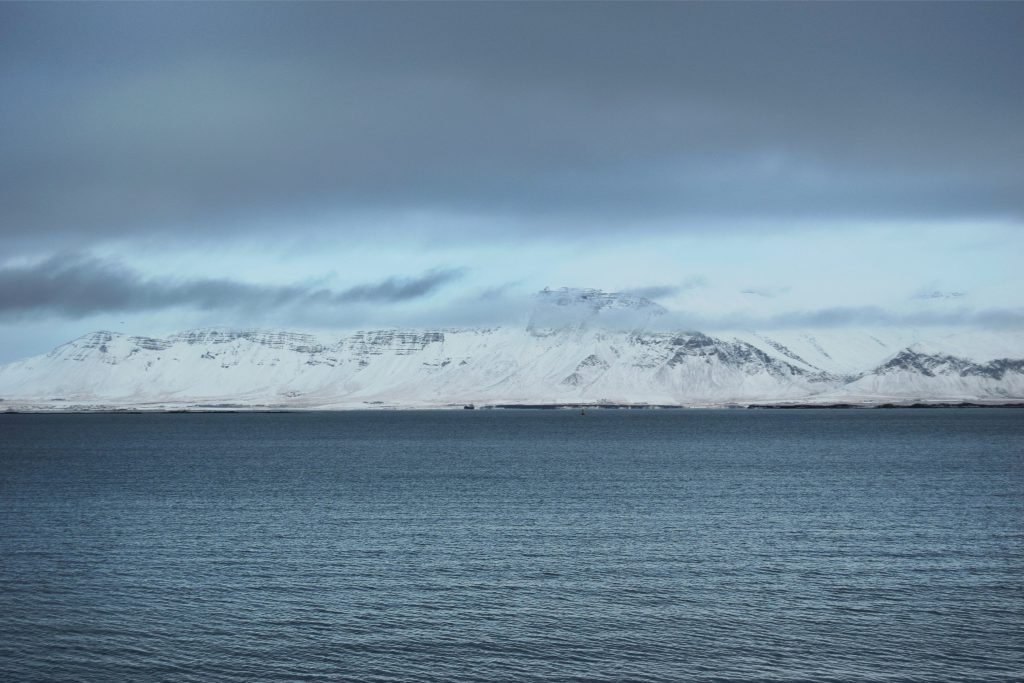 The first of these was something I’d seen photos of when I’d been looking for things to visit earlier. Even without blue sky and sunshine Jón Gunnar Árnason’s sculpture  Sólfarið, or Sun Voyager, was a magnificent sight. Made from shining stainless steel it seemed like the bones of a Viking ship, bleached by the sun and sprinkled with a dusting of ice. Designed in 1986, to commemorate the two hundredth anniversary of the city it was unveiled on 18 August 1990, the city’s bicentennial. Sadly, the artist died of leukaemia a year before the unveiling. His vision of a dream boat, celebrating the sun, light and hope is a wonderfully jubilant monument to him. 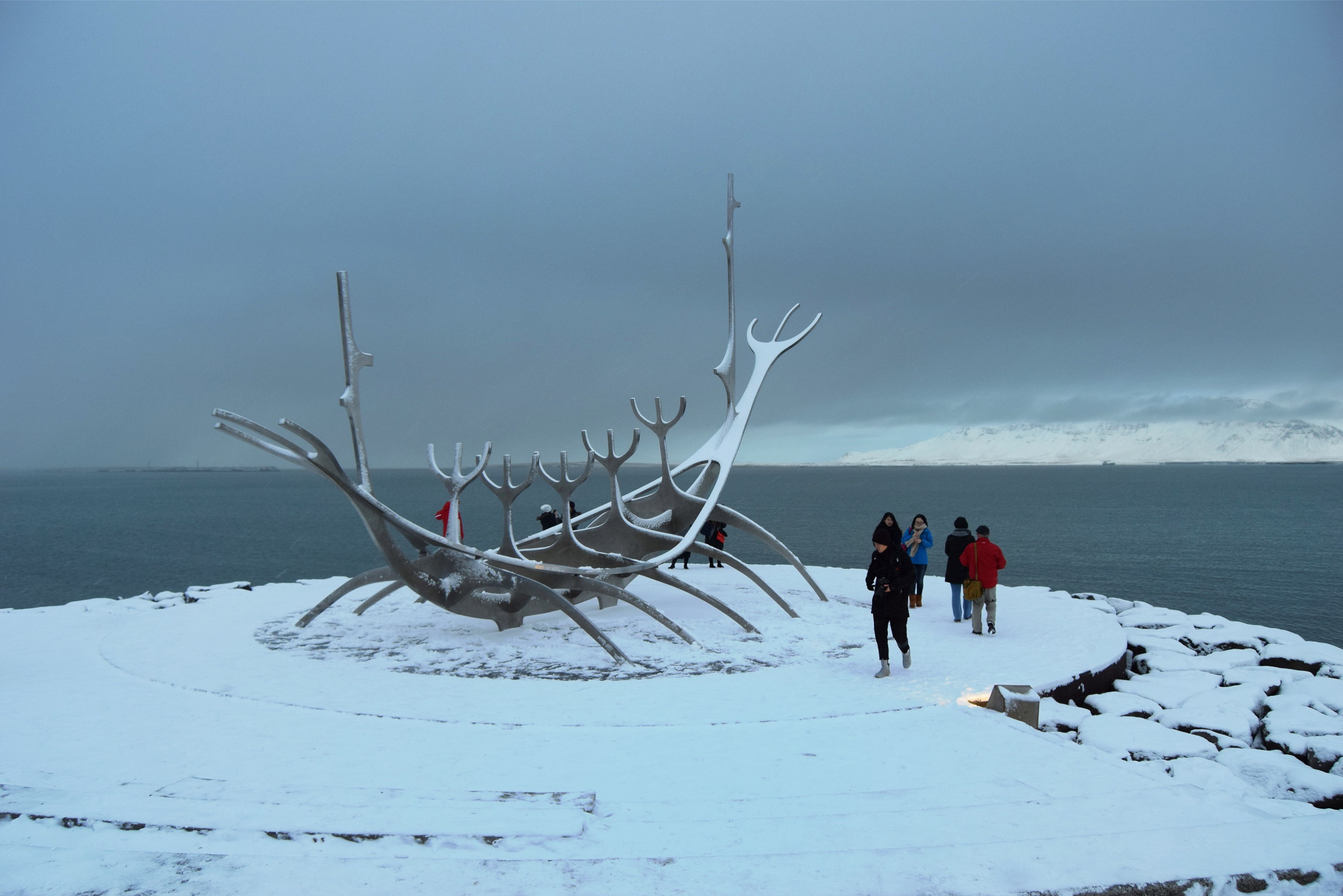 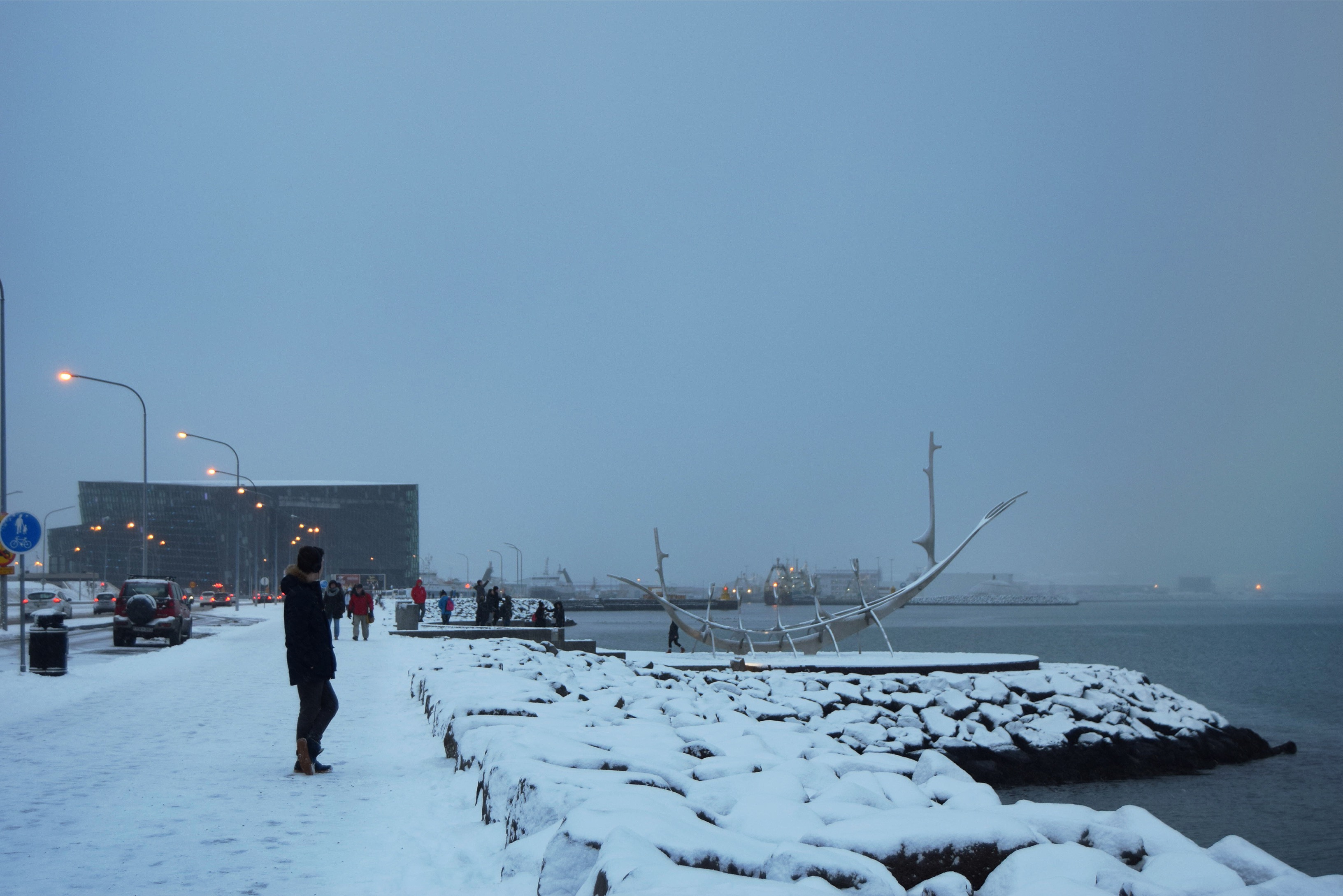 A little further along, Islandsvarden, by Reykjavík-born artist Johann Eyfells, was attracting less attention but, in my opinion, was no less worthy. At first glance the bronze piece looks like a large triangular volcanic rock with a hole in the middle, a little like a witch’s stone you might find on a beach. Today it was dusted with snow but, even so, the beautiful mixture of mottled greens, browns and blacks shone through. My one regret was that my shot through the centre revealed grey cloud and grey green sea rather than the mountains I knew were hiding there. 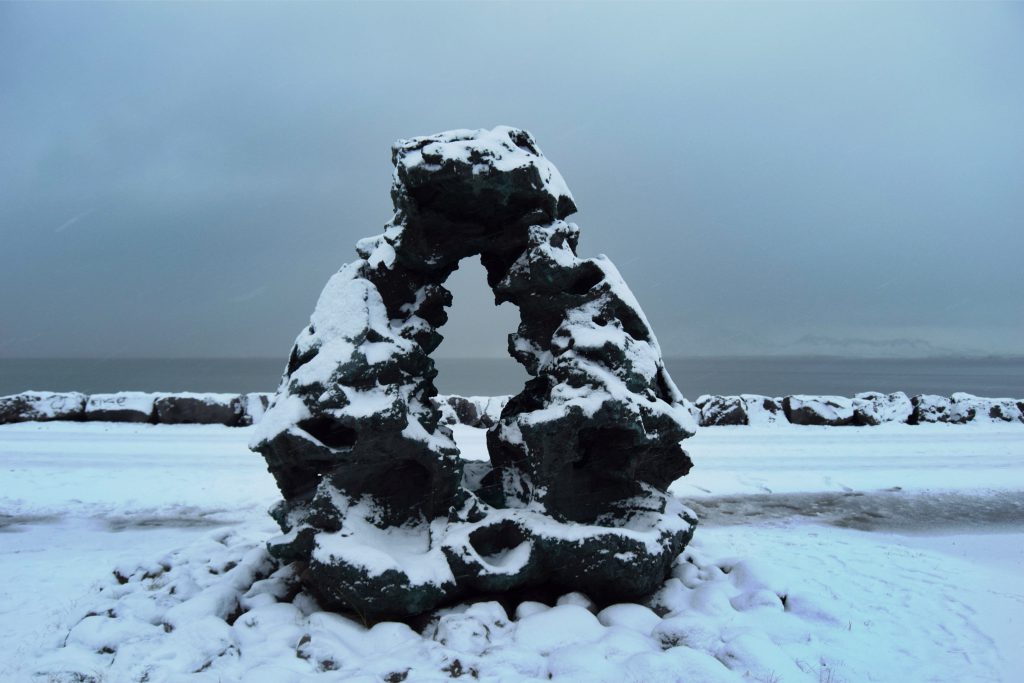 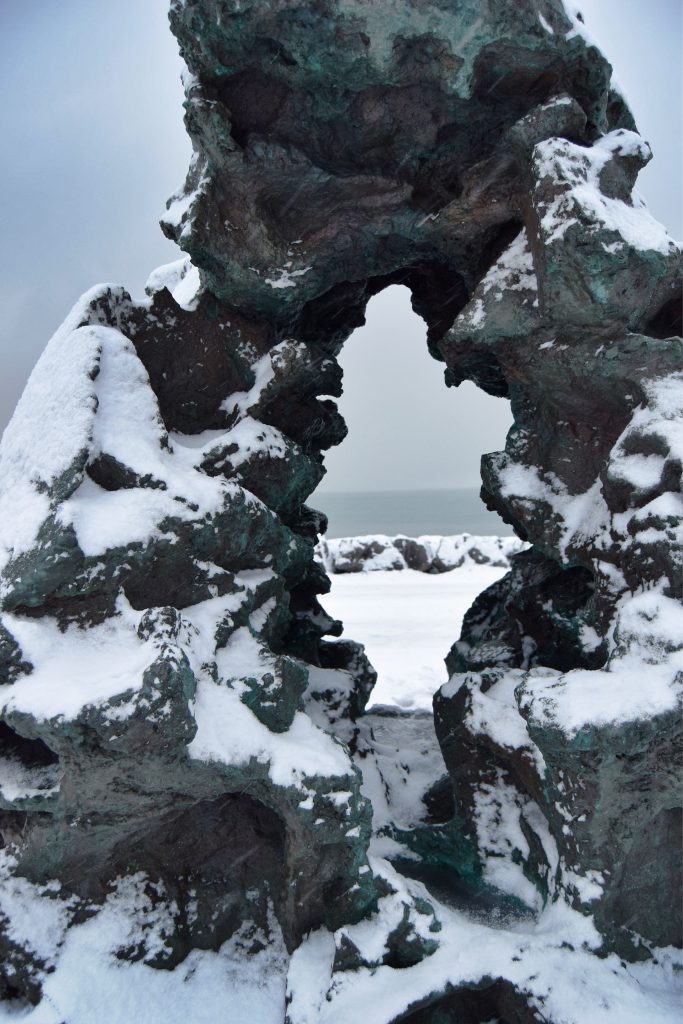 Further still another large bronze, this one resembling an arrowhead and called Partnership, was commissioned by Ambassador Charles E Cobb and his wife in 1991 as a celebration of fifty years of diplomatic relations between the USA and Iceland. Its identical twin stands in a bay in South Florida, linked to this by the Gulf Stream across the Atlantic. 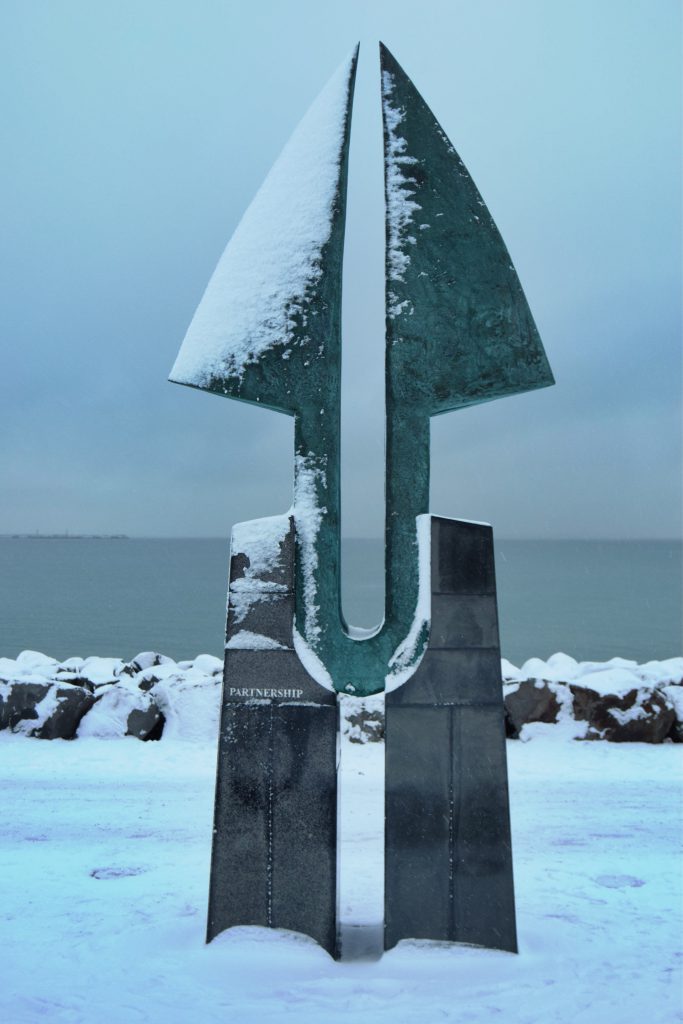 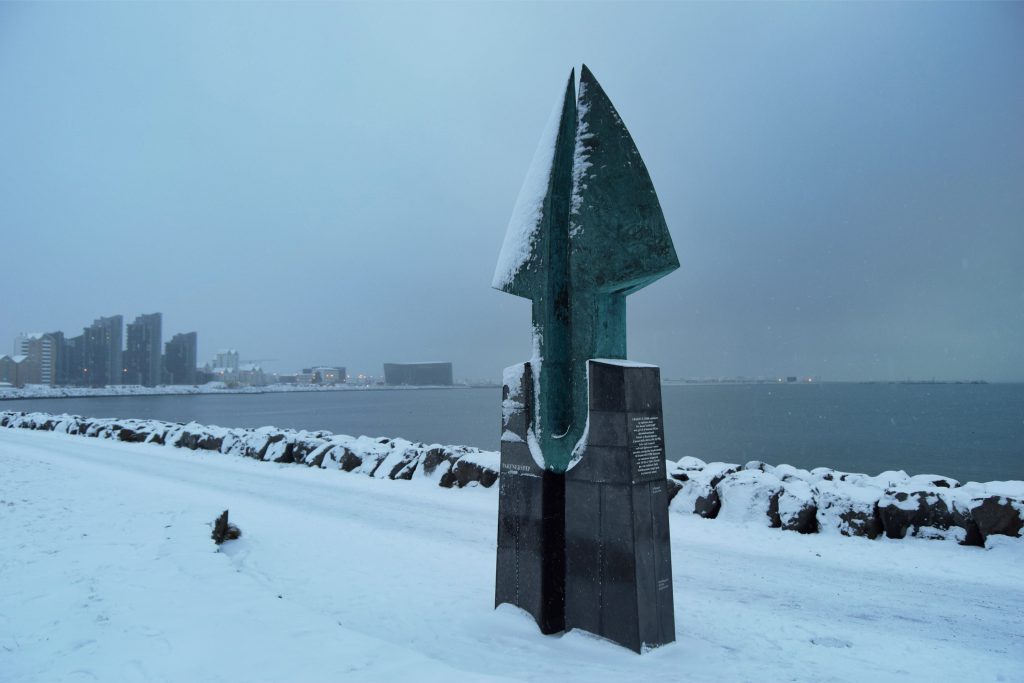 By now the icy wind was taking its toll on us and we turned between the buildings back into the heart of the city. It was time to head towards the hotel for some thawing out, just in case the weather changed again and our boat trip went ahead. 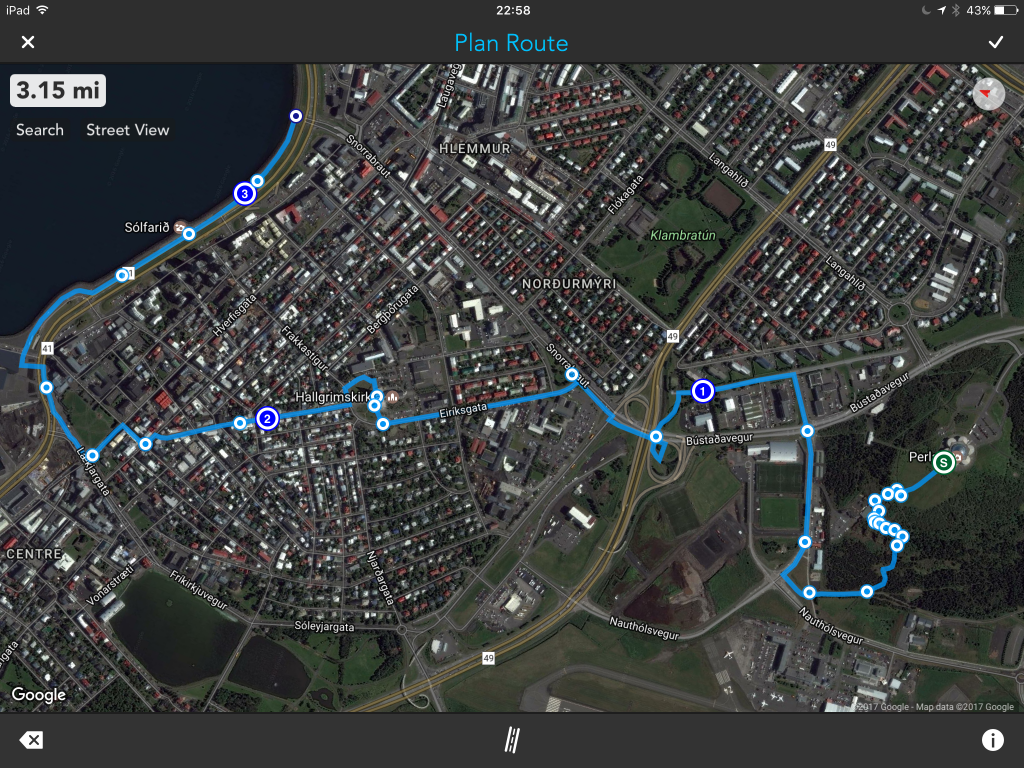 6 thoughts on “Footprints to nowhere”