Almost as soon as we got amongst the buildings the snow began to fall again. At first it was a mere sprinkling, pretty and soft as swansdown on our faces. Close to the bus station beside a trianglular park with a Christmas tree and some horse scuplptures we found the Icelandic Penis Museum. It seemed a strange topic for a museum but we didn’t really have the time or energy left to investigate further than the window. 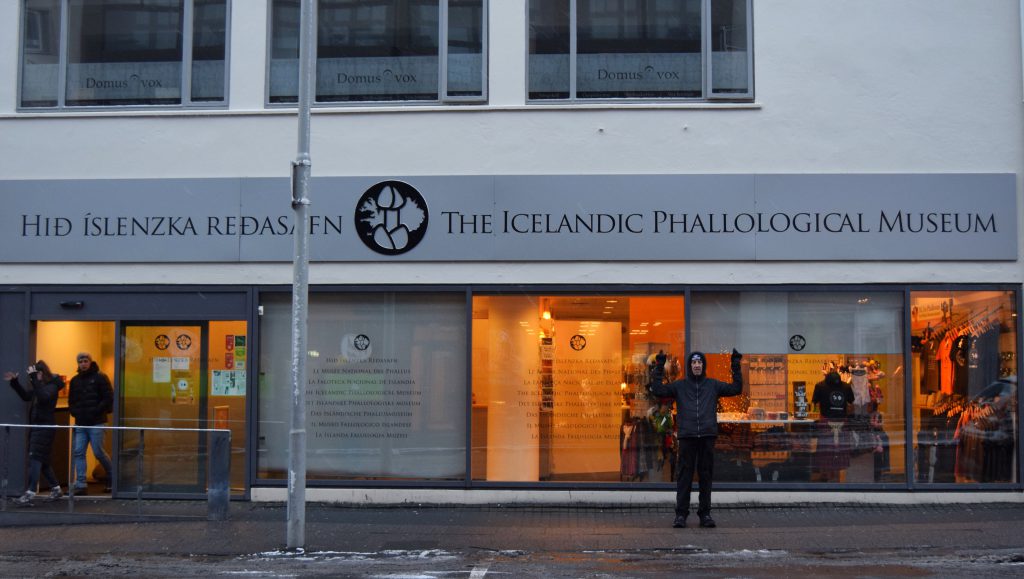 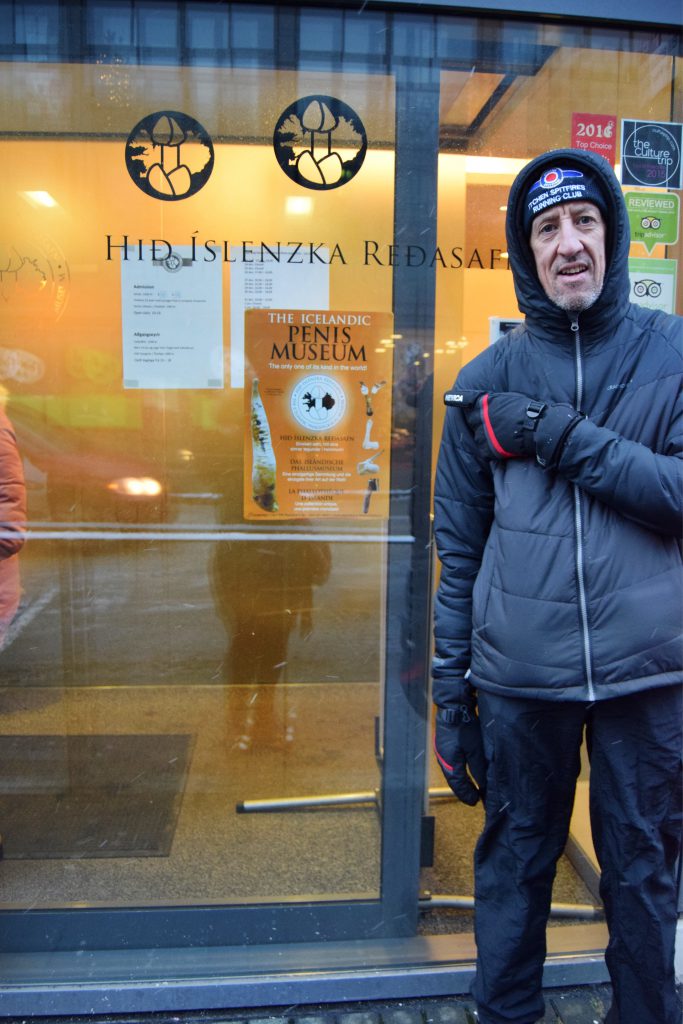 The snow got heavier and heavier as we headed back through the darkening streets towards our hotel. It was hard to tell whether the fading light was due to the weather or the sunset. These were no longer gentle flakes, caressing our faces but little hard balls, half snow half ice. They have a name, Graupel. They hurt. We kept our heads down and walked. If we’d been really sensible, we’d probably have found somewhere warm and dry to sit it out, preferably somewhere with coffee. Then again, it could have gone on for the rest of the day for all we knew, or got worse. 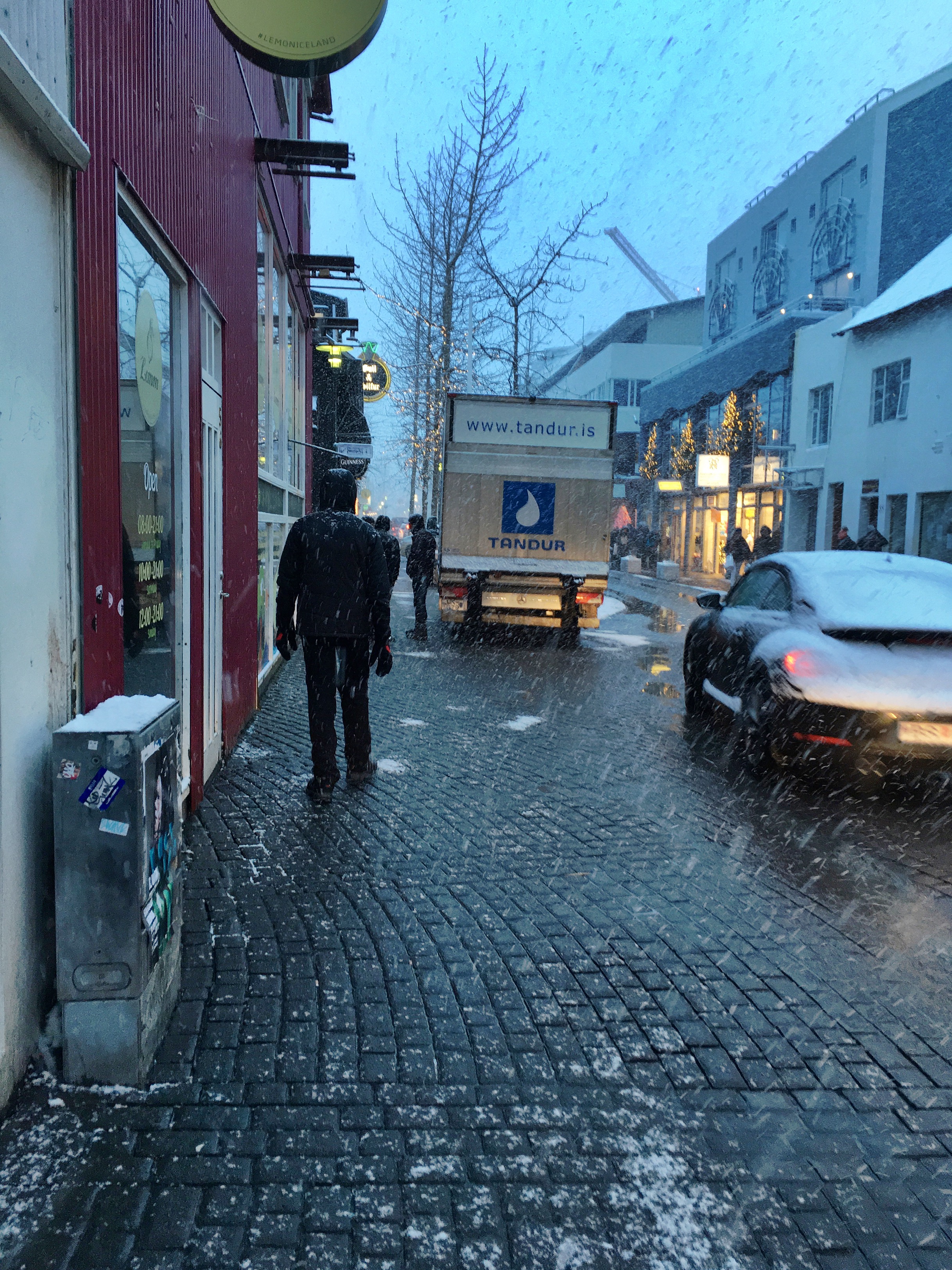 My camera had gone back in my bag but I couldn’t resist a few shots with my phone. We don’t see snow so often after all and I’ve only seen grupal once before. Obviously, in Iceland, where they have more than forty six different words for snow, everyone is used to being pelted with little icy balls on a regular basis. The shoppers kept shopping, the cars kept driving, only the tourists got their cameras out. 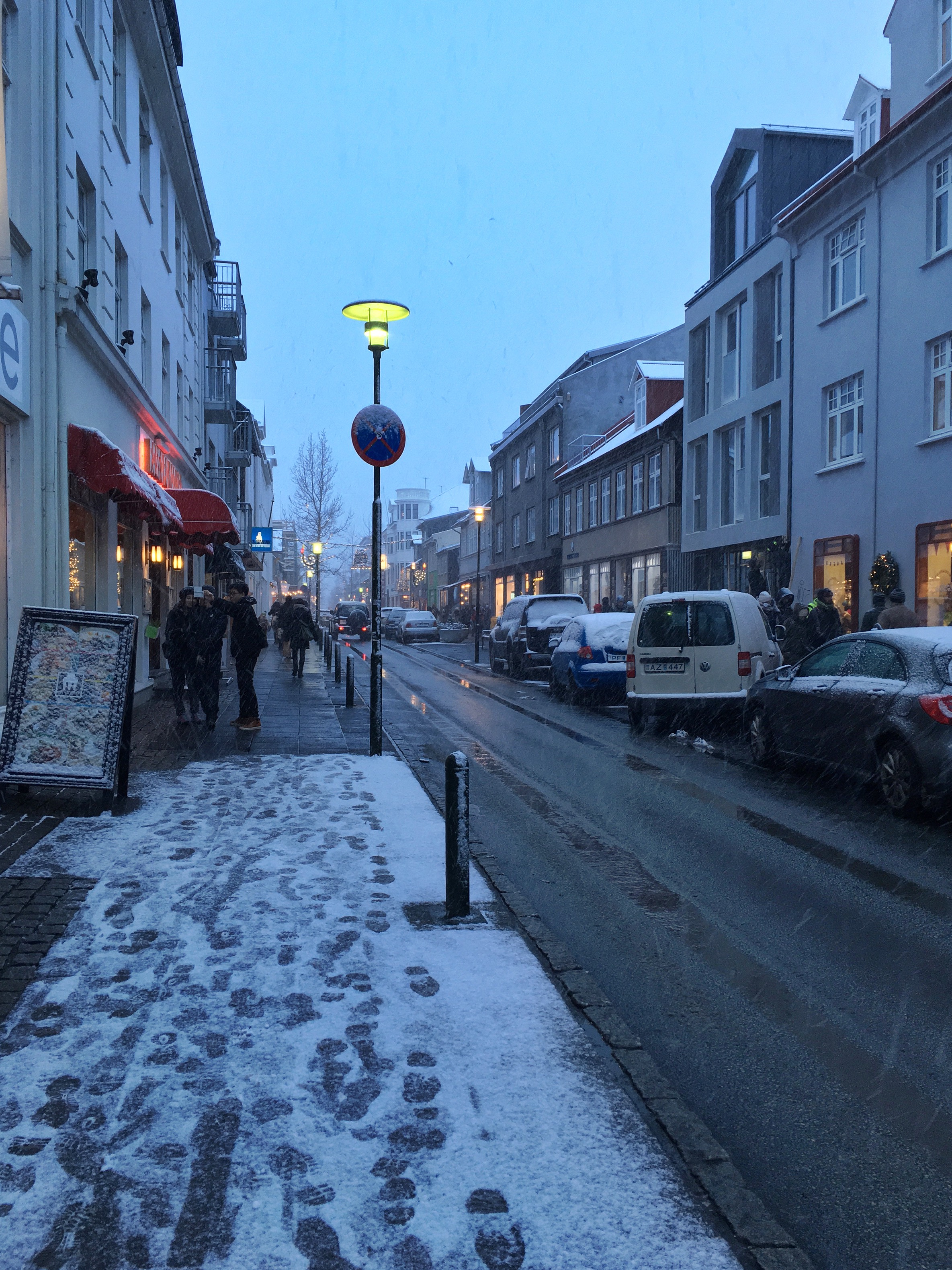 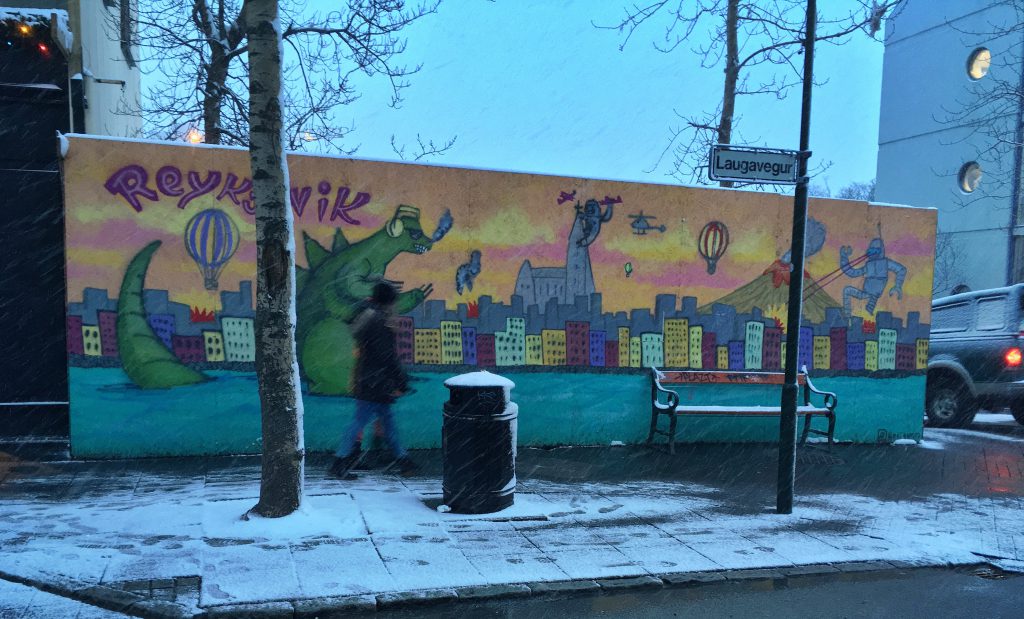 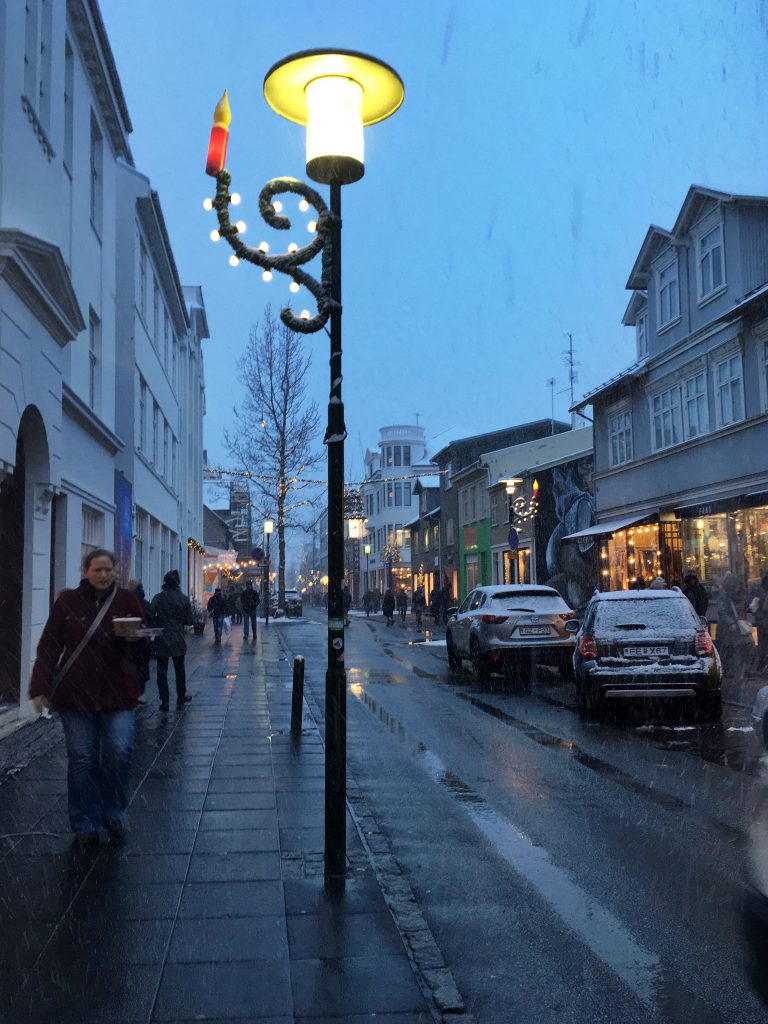 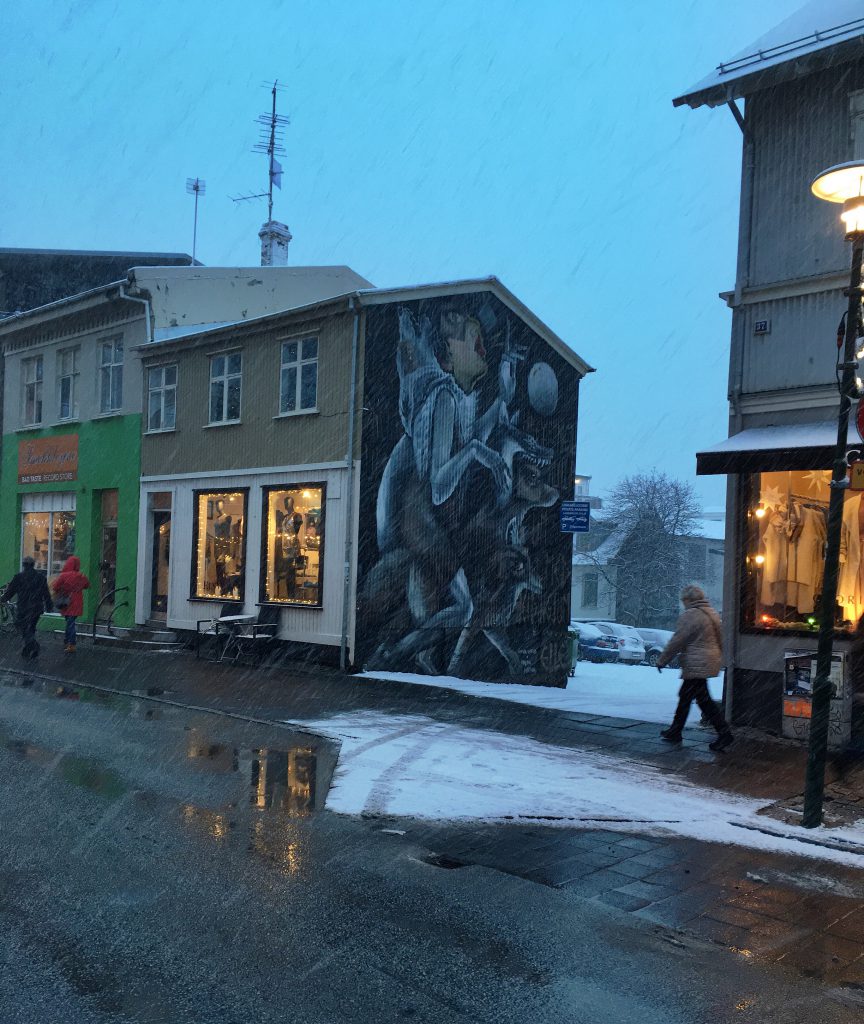 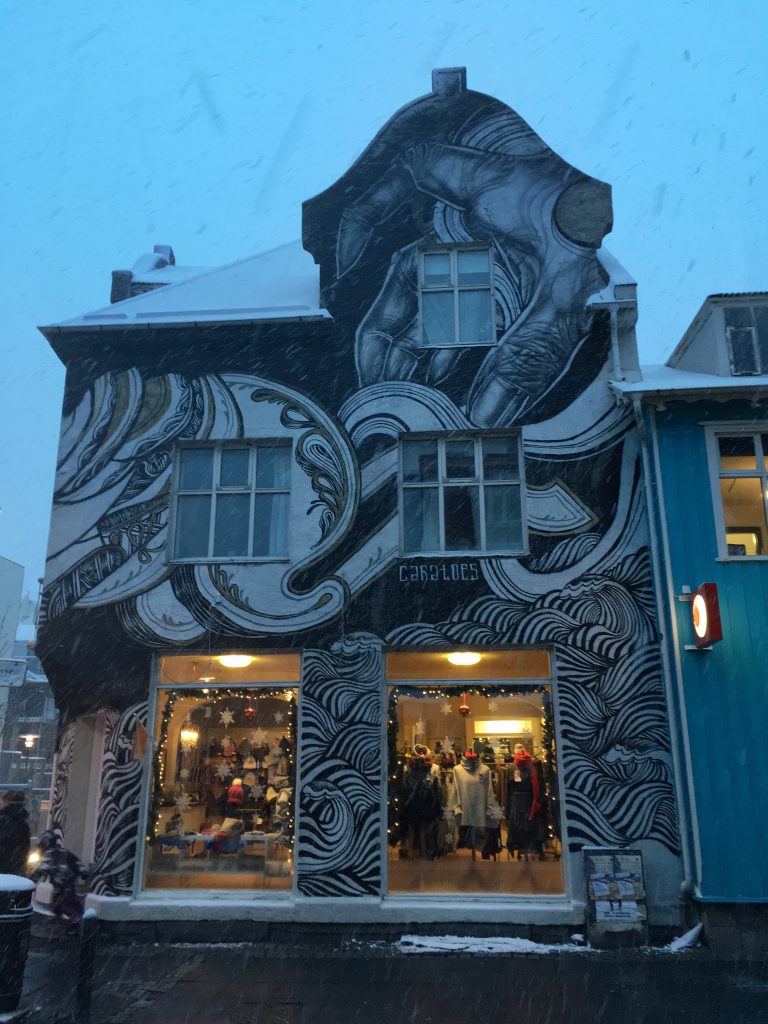 By the time we got as far as the cake shop on Hringbraut we could hardly see our hands in front of our faces. It wasn’t much further to our hotel but we decided to stop and treat ourselves to coffee, cakes and a bag of biscuits in case we got hungry later. It was a good move. The cakes were wonderful and they offered unlimited refills on our coffee. They even had the most beautiful little gingerbread houses for sale. Sadly, there was no way to get one back home in one piece. 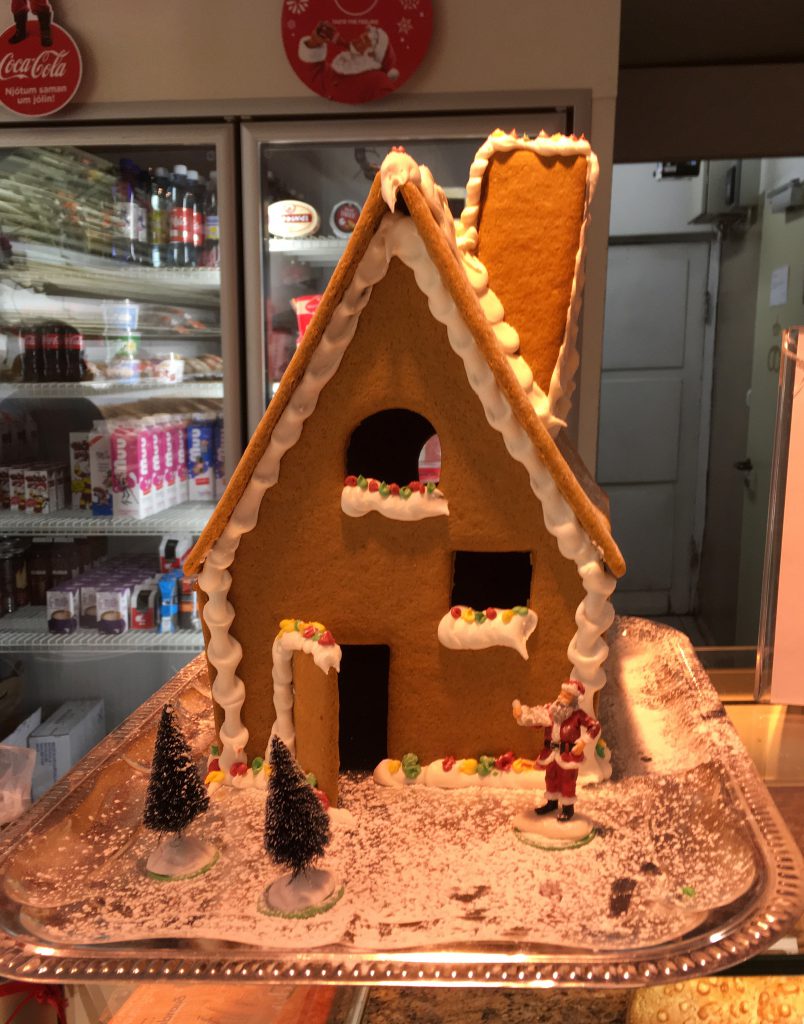 With all the snow and the cloud, we thought our aurora watching trip was doomed again but, as is the way in Iceland, the atrocious weather disappeared as quickly as it had arrived and, by late evening, there were patches of clear sky and a fairly good aurora forecast. The boat trip was on!

A coach came and picked us up and, wrapped up in all the warm clothes we possessed, we headed towards the harbour. It was all very exciting, although I was trying hard not to get my hopes up. The aurora is an ephemeral thing, impossible to pin down or predict with any certainty. Pretty soon we all piled onto the two little boats. 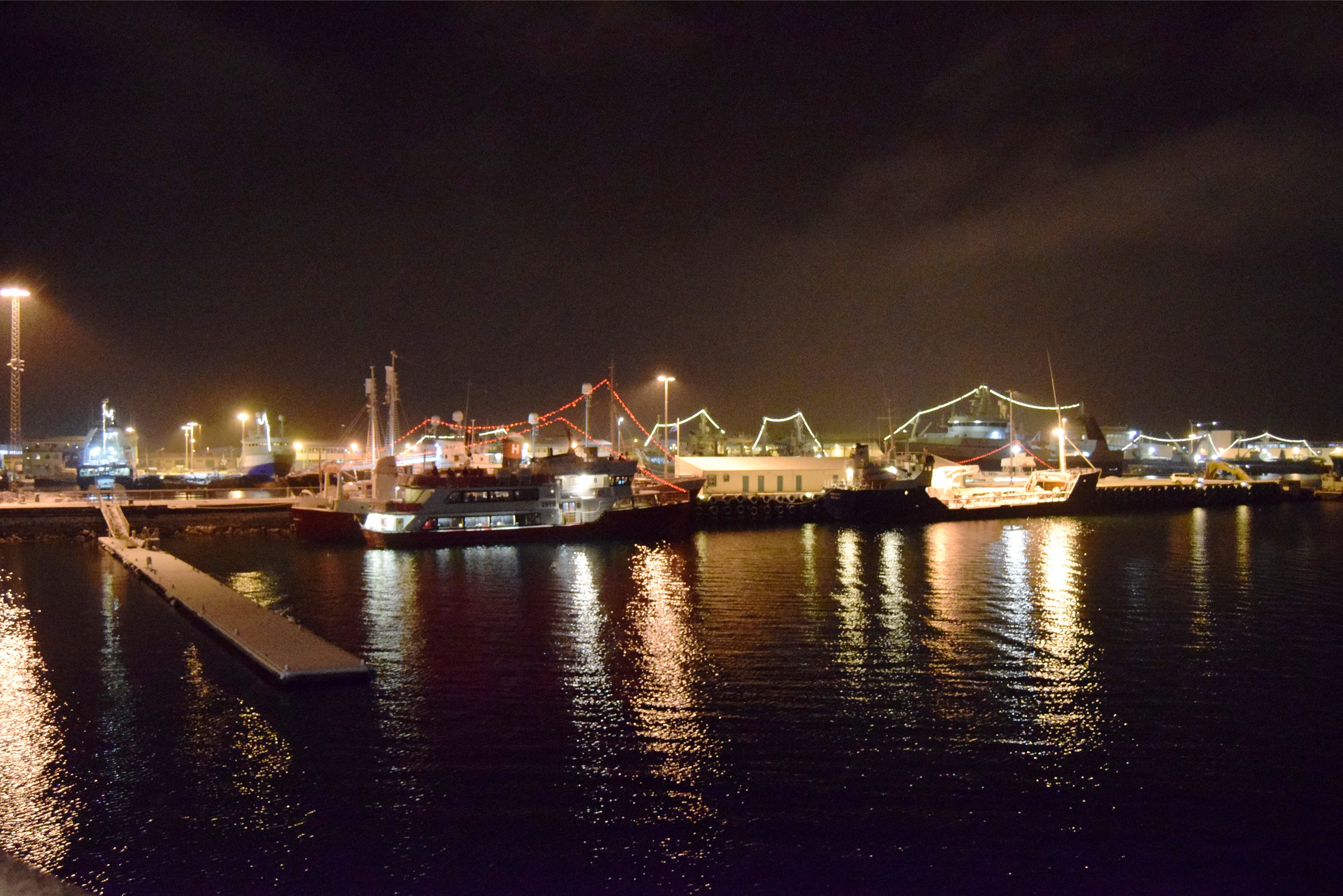 Commando and I found seats on the upper deck, sure this would be the best place to see the aurora if it did appear for us. We ended up sitting next to a couple from our hotel who had seen us at Perlan earlier, although we hadn’t seen them. We passed the time chatting. Eventually the boat set off and the lights of Reykjavik Harbour slowly receded into the distance. I took a couple of practice shots, discovering as I did that taking low light photos on a moving boat is not as easy as I’d thought. 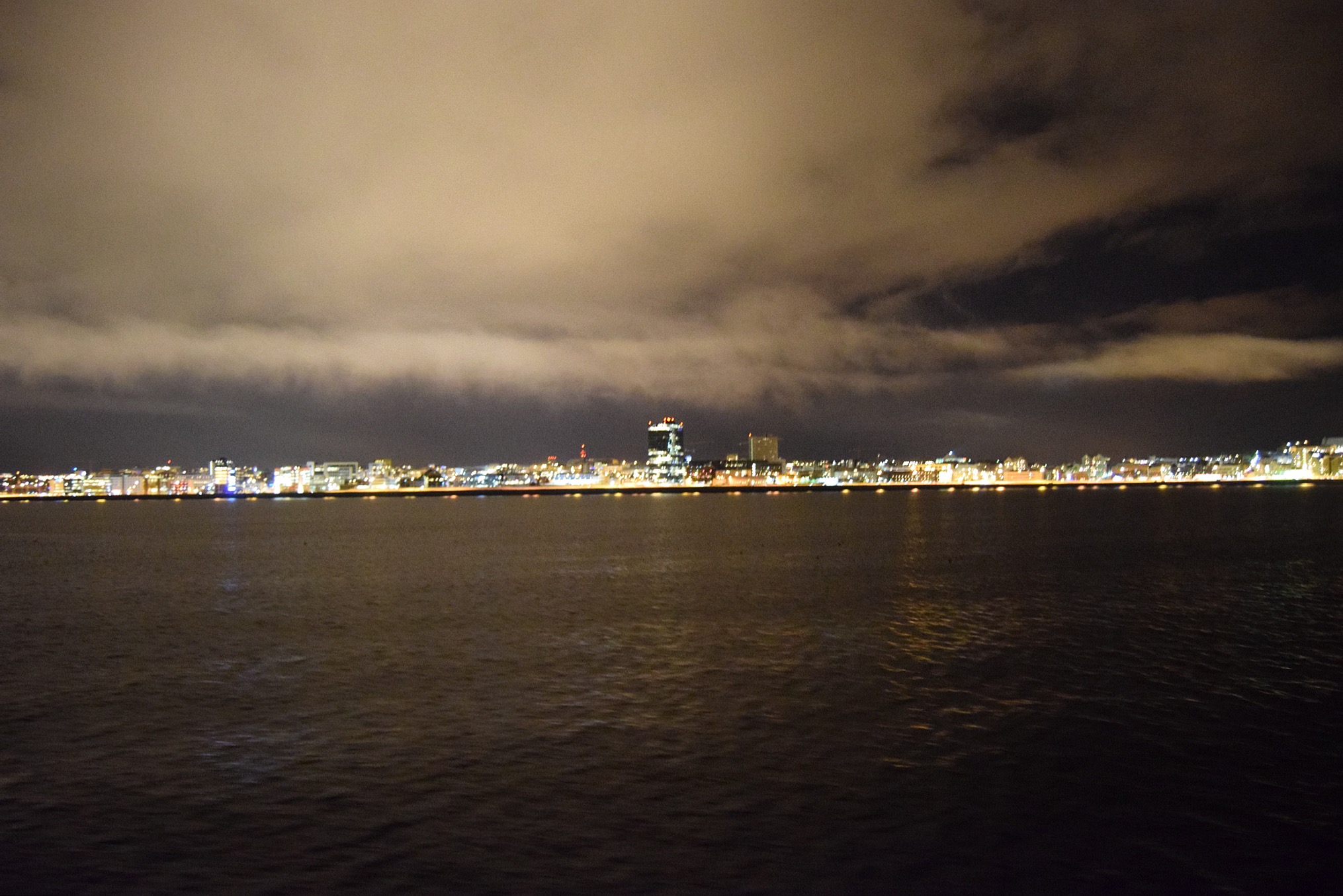 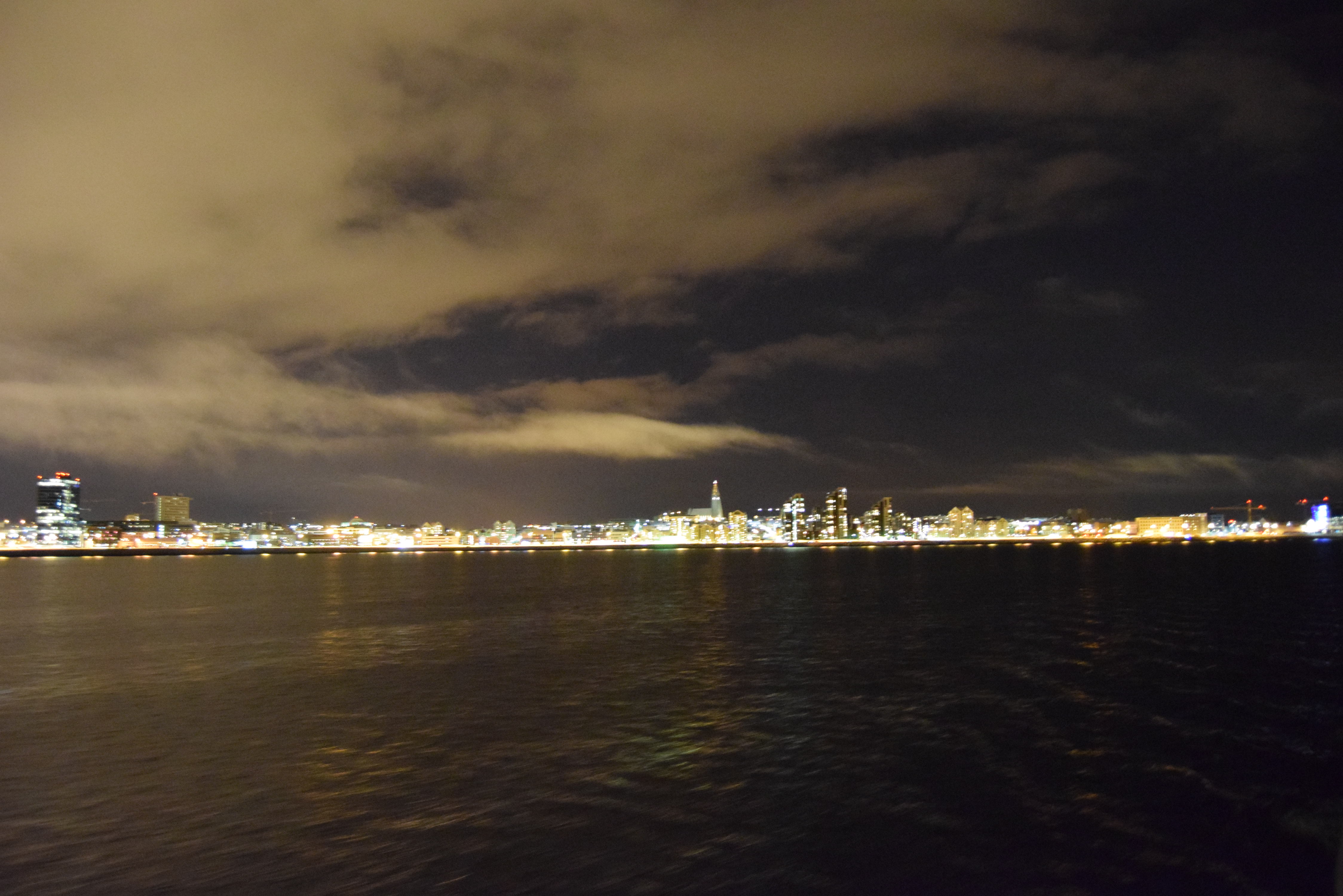 The clouds were a worry. There was some clear sky but, as we left the city lights behind, it was obvious even this wasn’t quite as clear as it looked. Through the breaks in the cloud we could see stars but only the brightest, Orion, the plough, Cassiopeia, the usual city stars. A thin veil of icy cloud high in the sky was masking the multitude of little stars I knew were up there and I was worried they’d also hide the aurora if it came out to play.

We sailed out into Kollafjörður Bay where the moon and lights from the little towns and farms turned the hazy clouds into such magnificent colours we began to think the show had begun. Photos were taken. They give an impression but nothing more. The darkness and the movement of the boat has turned them into impressionist paintings rather than the crisp clear images I’d hoped for. A couple of people had tripods with them but I noticed they soon put them away. A tripod on a moving boat is about as useful as match in a blizzard. 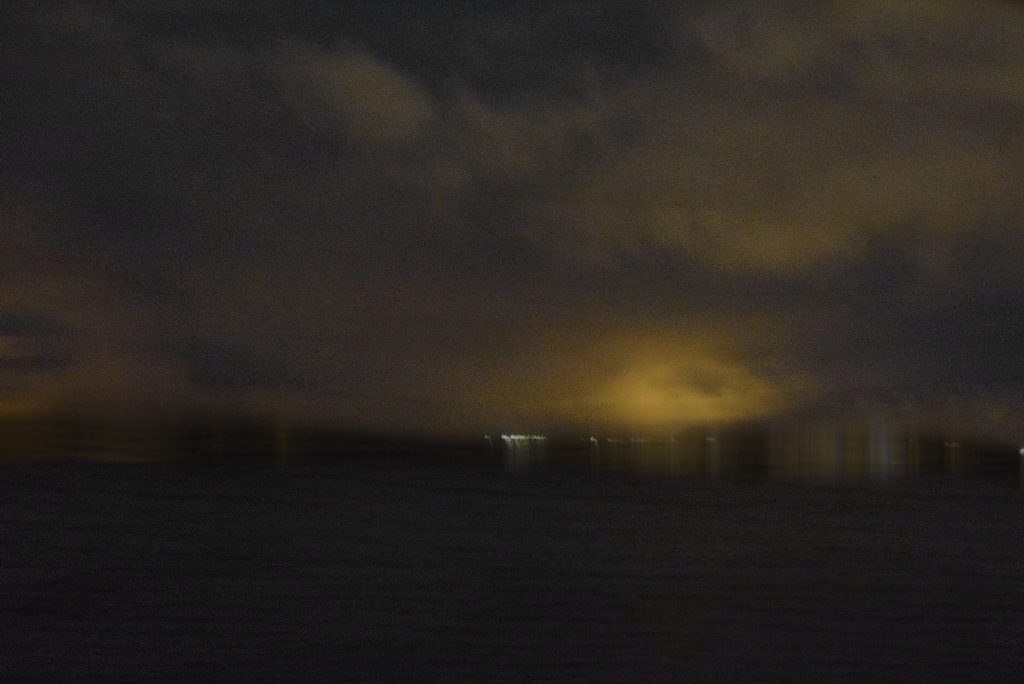 Eventually we stopped, a little way off Viðey Island, the largest island in Kollafjörður Bay. Our original plans had been to watch the aurora from there but, after we’d booked flights and hotel, we discovered the boats only run there at weekends in winter. It was a shame because the island has archeological remains dating from the tenth century. It also has Videyjarstofa House daging from 1755 and two hiking trails. 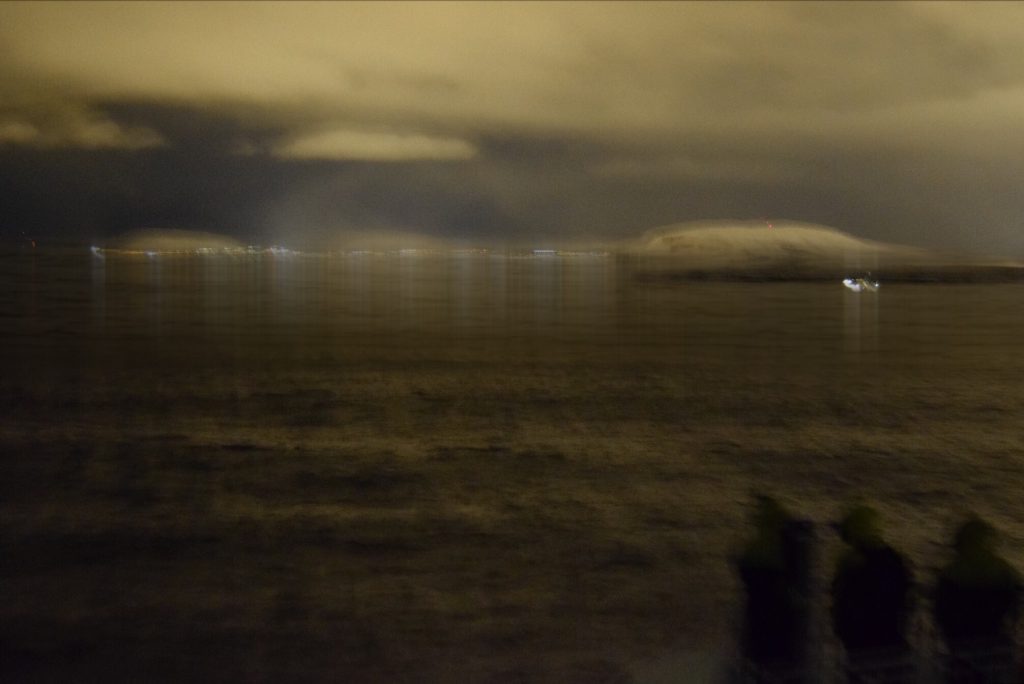 The host of the trip told us all about the Imagine Peace Tower, built by Yoko Ono on the island. There is a wishing well with the words Imagine Peace in twenty four languages and a beam of blue light that is lit every year on John Lennon’s Birthday and stays alight until the date of his death.

“Sometimes it is lit on other occasions too,” he said and, as if to prove him right, the light came on a few moments later. Sadly, my photographs of the island after the light came on were so spectacularly bad they are not worth showing. Instead I have found a picture on Wikimedia that gives a good approximation of what we saw, although with less cloud.

The host talked a lot. Maybe he was trying to keep us amused on the cold dark sea while we waited for the aurora. He told us there are a lot of superstitions around the aurora in Iceland. This was no great surprise. If there are more superstitious people on the planet I have not met them. They once believed the lights in the sky were caused by the Valkyrie, War like women on horseback. The strange coloured lights were said to be shining from their polished armour when they led men killed in war to Valhalla. Most Iclanders do not believe this today of course.

They do, however, believe a lot of other things. The lights, are said to predict the weather, calm unmoving aurora mean calm weather, conversely, very active lights mean storms.  Pregnant women should keep away from the aurora and not look at the lights or their children will become restless or cross eyed. Very fast moving aurora are thought to signify that a war is taking place somewhere in the world. He also told us Icelanders believed the lights would come if you whistled and disappear if you clapped. There was a lot of whistling after he told us that.

We waited and we waited. The whistling became annoying. After a long, long time the host told us he’d picked up some very feint signs of green with his camera, “but they’re not visible to the naked eye.” Commando was very sceptical. To be honest, so was I. It looked as if we were going to be out of luck. We’d been on the boat in the freezing cold for almost three hours by this time and, even with all our warm clothing, the cold was seeping into our bones. I was beginning to wish the host would just shut up and take us home, or at least somewhere warm. Everyone was beginning to get restless.

When I saw the first, very feint hint of green above the clouds I thought I was imagining it. It seemed nothing more than wishful thinking. As I watched though, it grew darker, a broken wavy line of green amid the blackness. I took a photo between the heads of all the people who’d stood to do the same. It was not the best photo I’ve ever taken but it does at least prove it was there and I saw it. 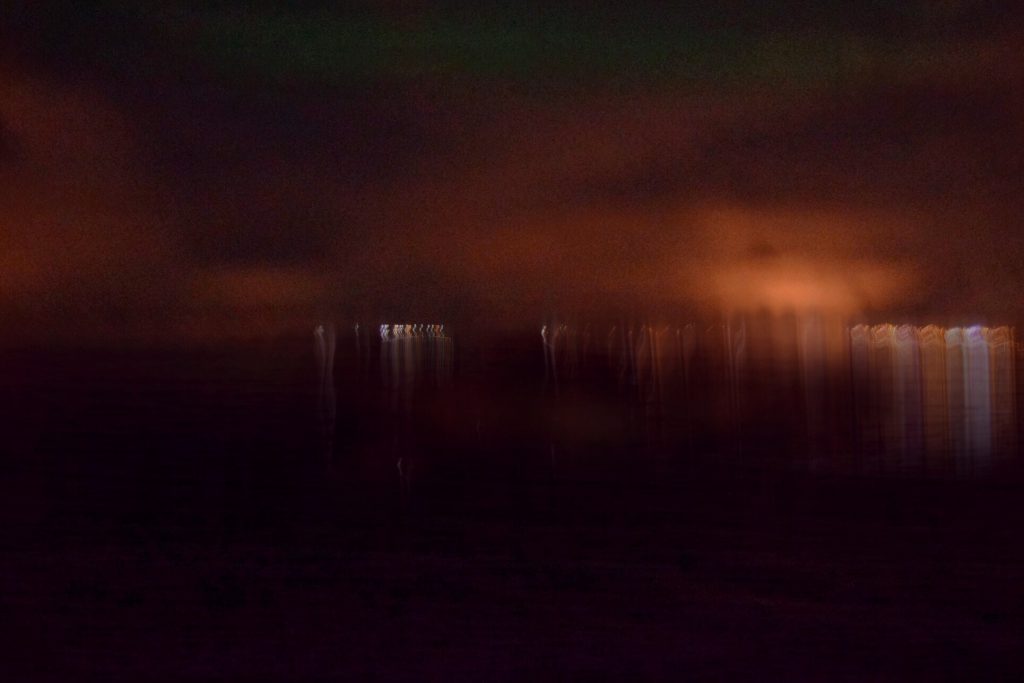 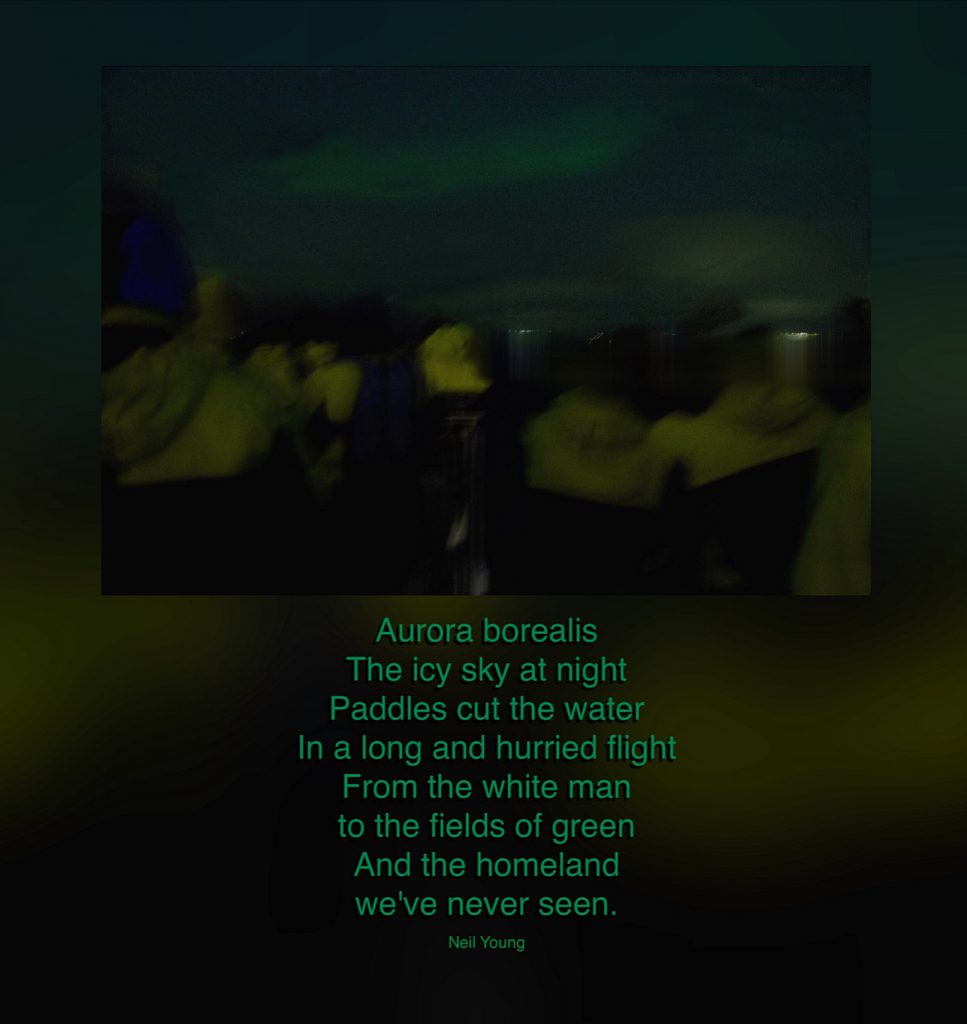 The light seemed to fade after a few moments but then it grew brighter and I thought I detected a hint of purple. The camera told me I did. After that I put my camera away. It was obvious any pictures I took were not going to be good, the boat was rocking, people were moving about trying to get their own pictures. Besides, this fleeting thing was not something I wanted to see through the lense of a camera. I wanted to stare with my own eyes. 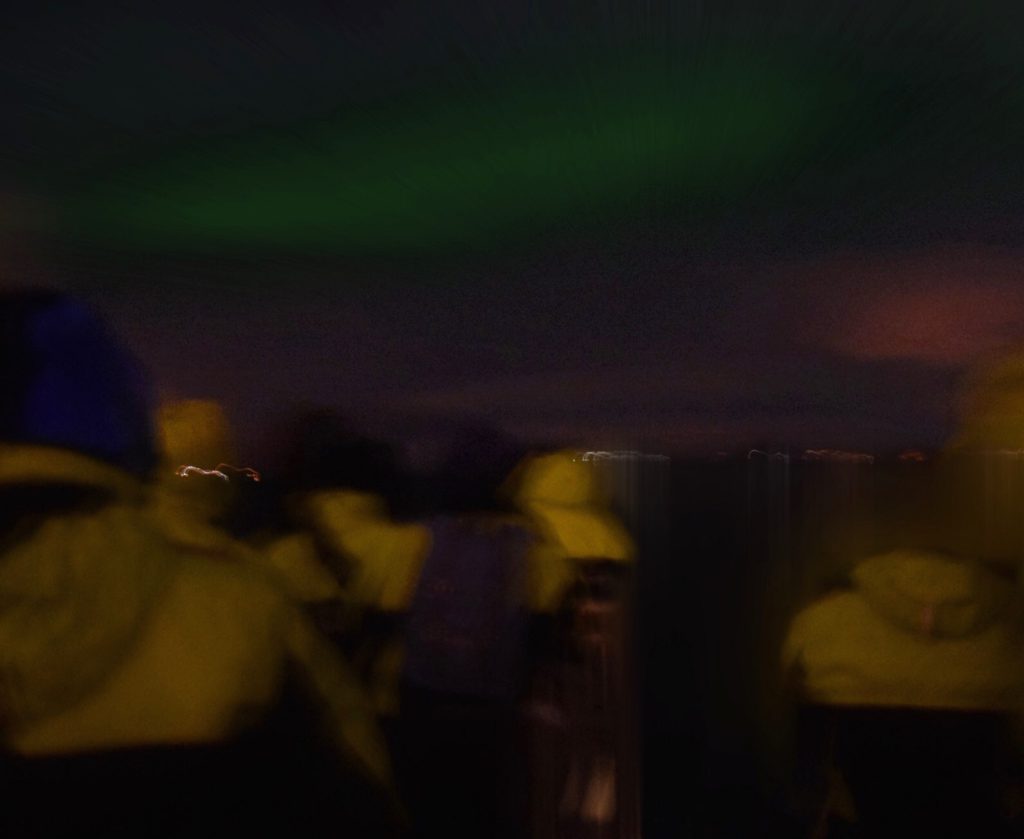 Slowly the green light faded away. It had not been as bright as I’d hoped but I’d seen it. Then, just as we all thought the show was over, more green appeared a little further over in the sky, a curve this time, like the bottom edge of a curtain. It darkened and then faded again all in a matter of minutes. For a while there was nothing more and we were preparing to leave when Commando noticed a vertical line of green in front of the boat. For a second I thought it was the Imagine light, then it darkened and I knew it wasn’t.

The aurora didn’t dance for us. It wasn’t bright because of the thin icy cloud and it lasted just a few minutes at most. There were none of the spectacular photos I’d hoped for, just a couple of dark, out of focus shots as proof. We’d spent more than three hours packed onto a small boat in the icy water. We’d seen it though and that was enough for me.