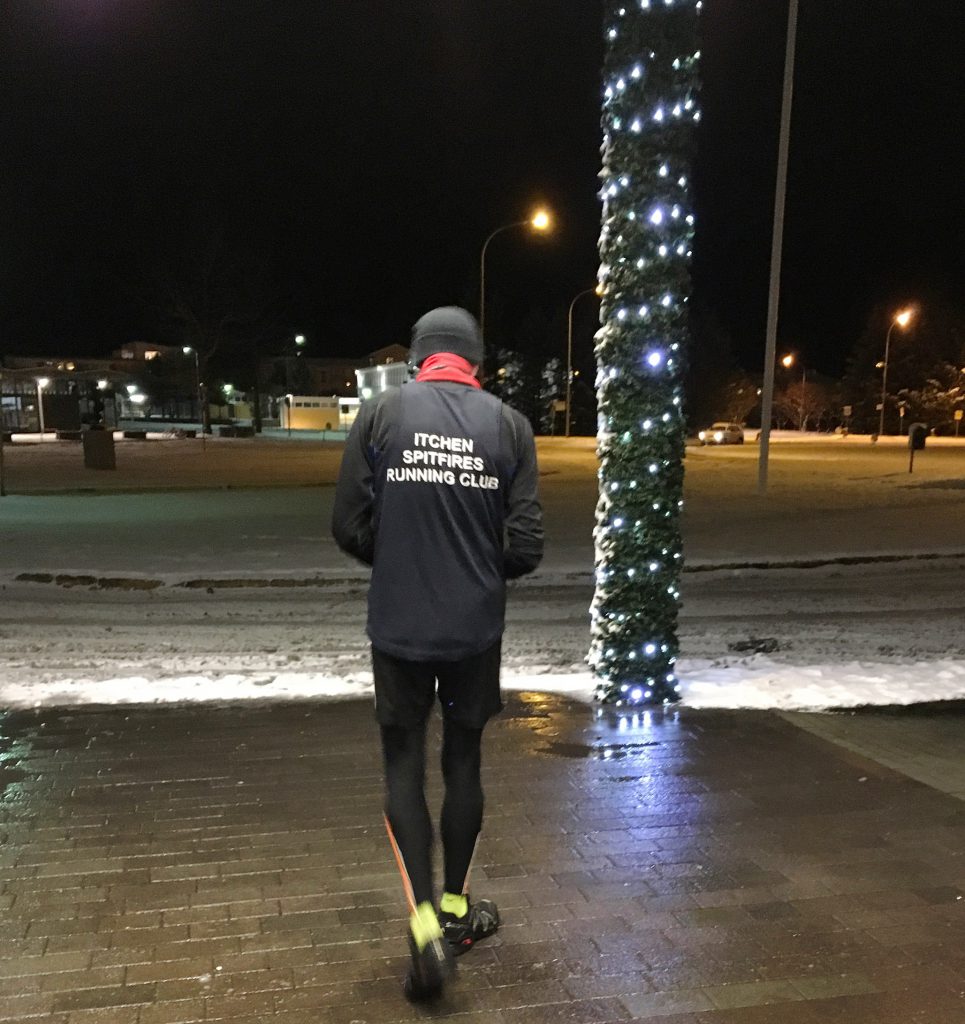 Our time in Iceland was coming to a close. We hadn’t got back from our aurora watching adventure until the early hours of the morning and it was tempting to sleep in and have a late breakfast. The lure of one more run and walk in the snow was stronger though. Bleary eyed we stepped out of the hotel into the icy air. In any other country this would have been the crack of dawn. In Iceland though daybreak was still four hours or so away.

Under the awning of the hotel entrance I tried to take photos of Commando in his running kit but he was too cold to stand still and eager to get running. Even with my arctic coat, hat, gloves and many layers, the frozen air was pinching at my face making it tingle and trying to work its way through my thick knitted leggings and thermals. With a wave he was off. The sound of his trail shoes crunching on the snow seemed loud in the early morning silence. 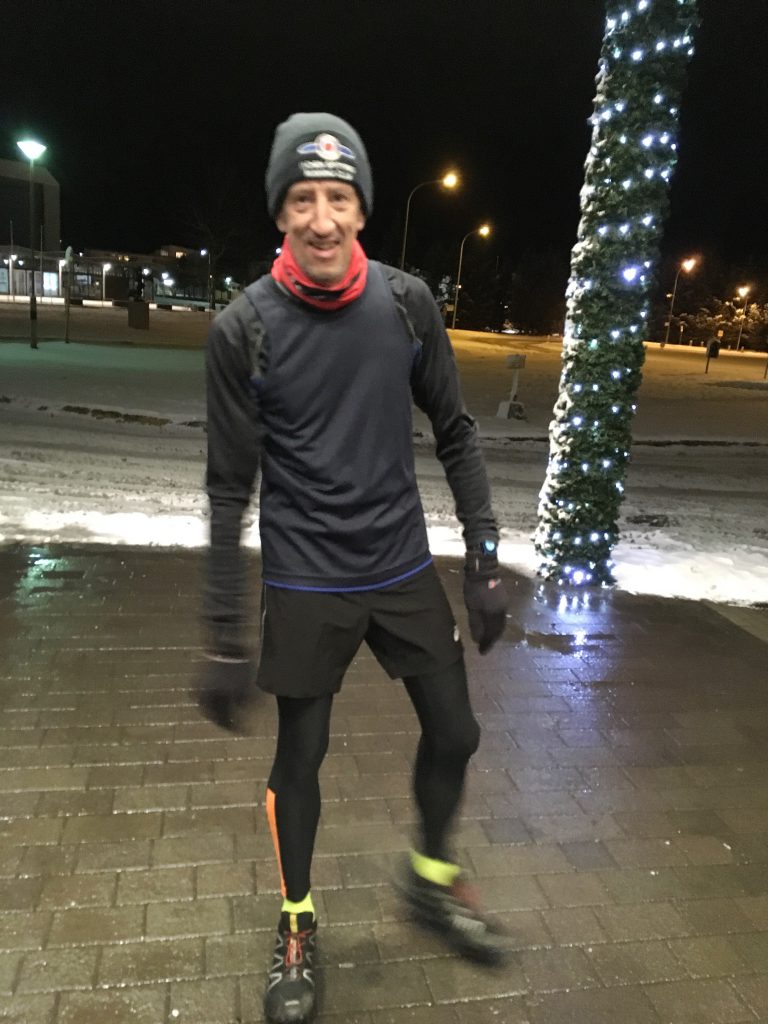 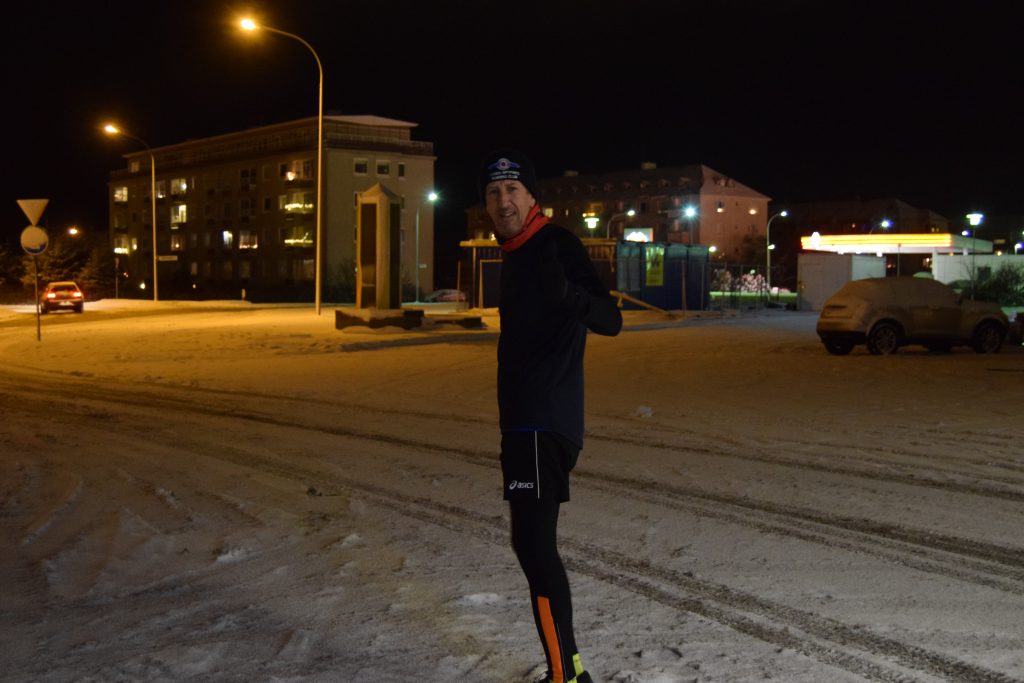 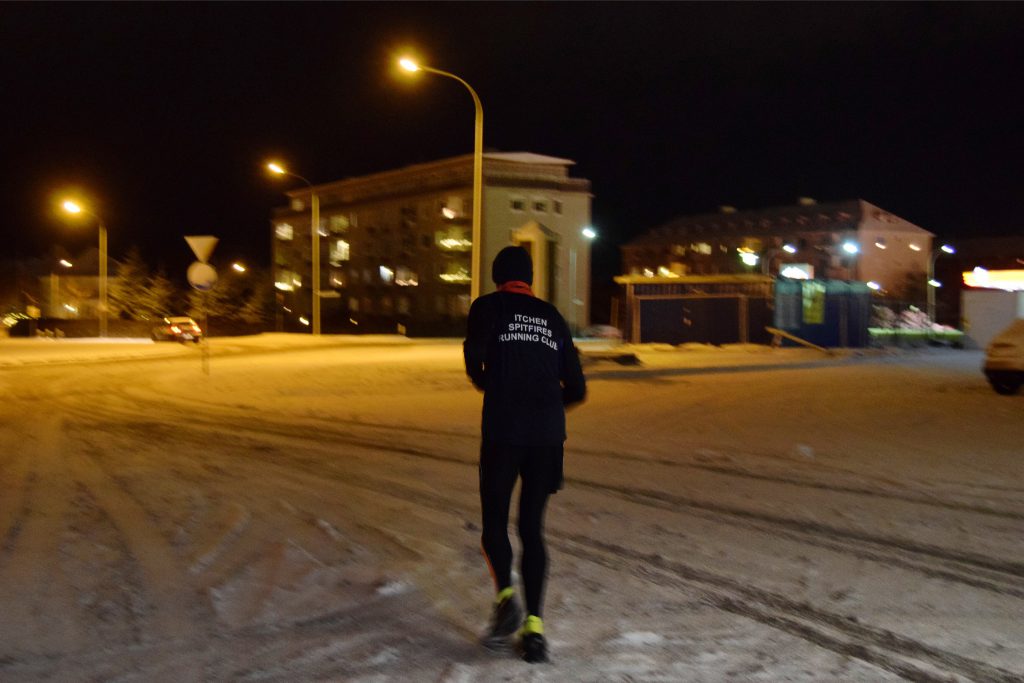 For a while I stood, watching as he disappeared into the snowy streets lit by lights of starry gold. When I could no longer see him I turned and headed in the direction of the sea. This time I knew where I was going, more or less. The snow was, by now, several inches deep on the paths, marked by a few old footprints and blown into ripples like the sand on a beach. 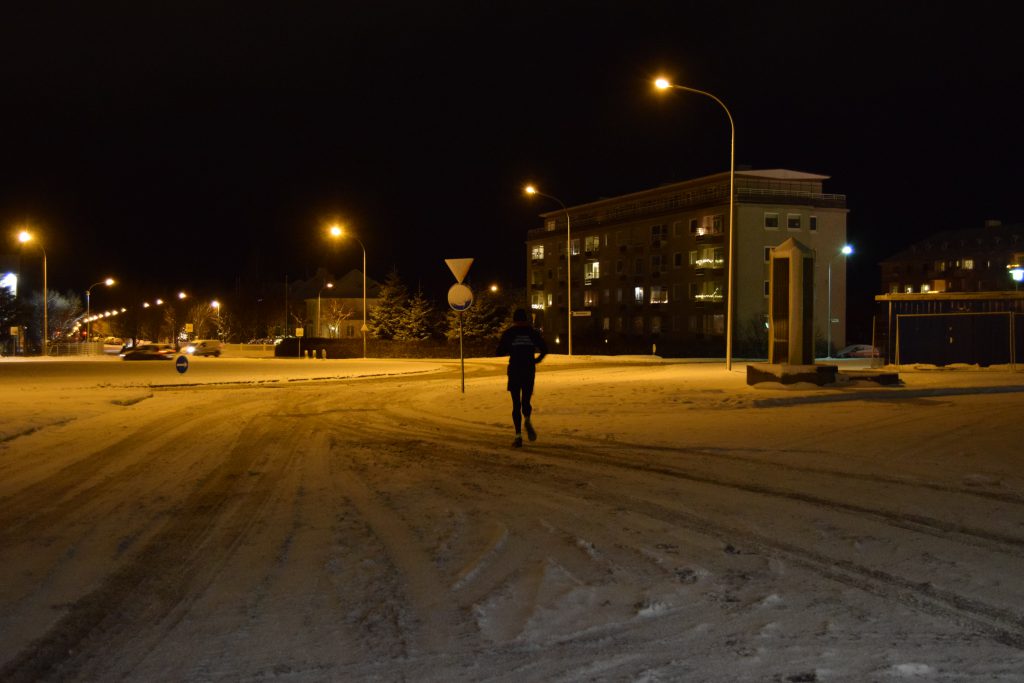 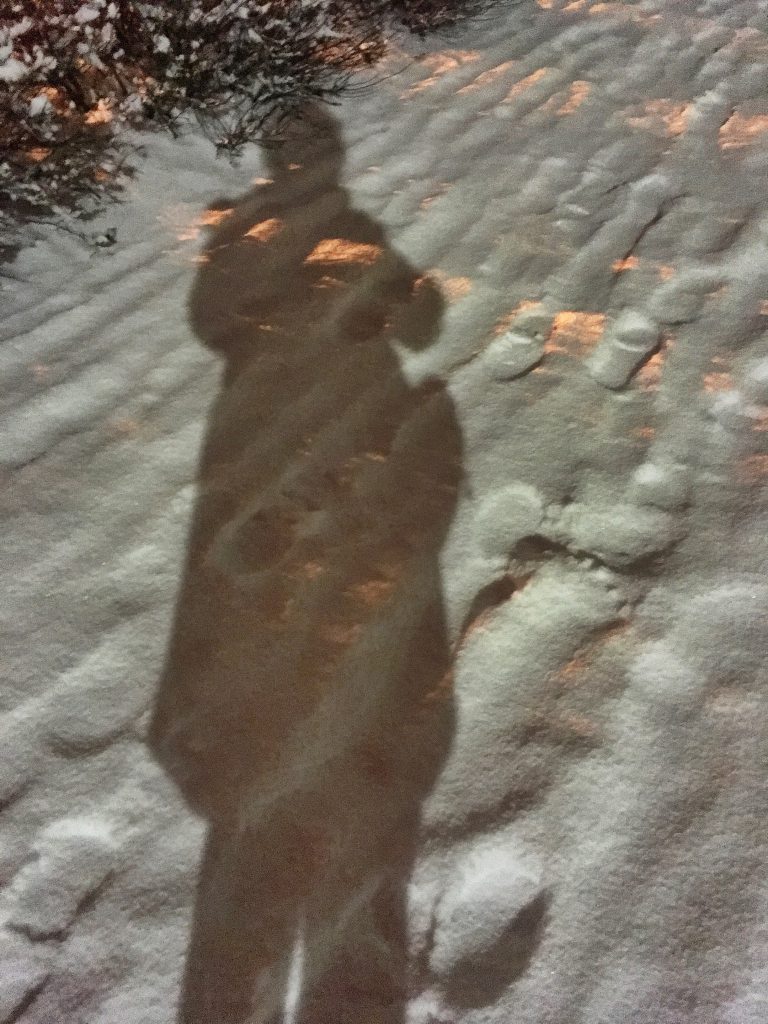 My boots made a crunching squeak, like polystyrene breaking, with every step as I walked along the quiet street, past university buildings and low apartment blocks. Lights were on in some windows I passed but others were in darkness. A woman, blowing on her hands and hunched against the cold, opened her car boot and slammed it then did the same with all the doors. This must be a normal Icelandic solution to the problem of a snow covered car. As I passed she began to brush at the remnants on her windscreen using a tool like an ice scraper with soft bristles instead of a blade. I guess, if you live somewhere where it snows all the time this is normality. 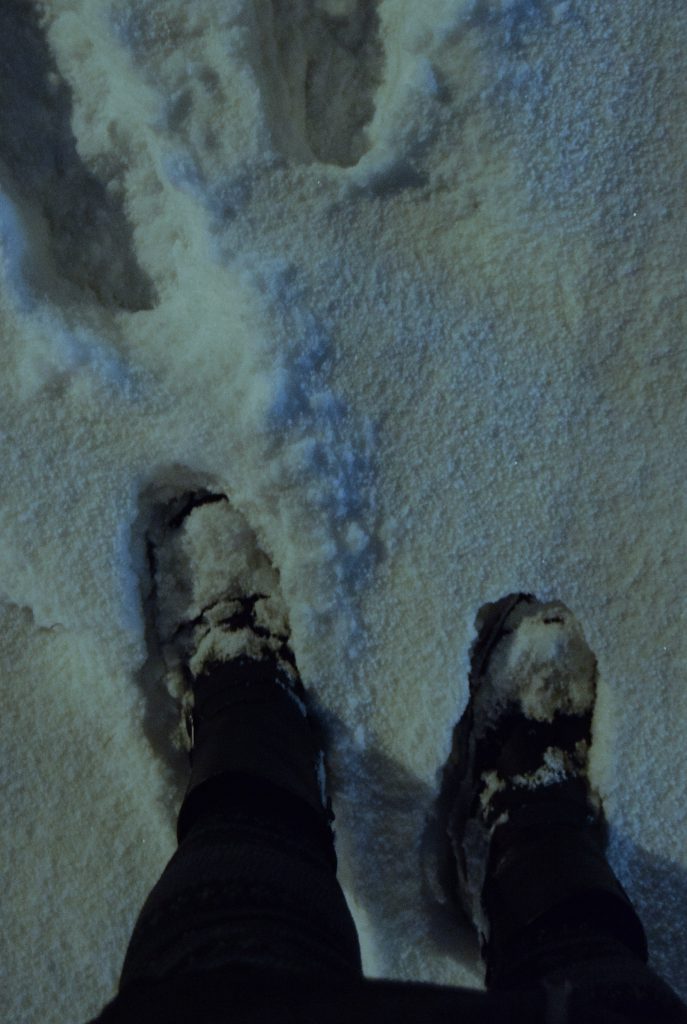 After I passed a side road the apartment blocks turned to small, widely spaced houses, most with steps leading to their front doors. The road seemed far longer than I’d expected but the snowy paths meant I was walking far slower than usual. After a while, I began to wonder if I’d somehow taken a wrong turn again. Just when I was giving up hope and thinking about fishing my phone out of my pocket to check the map, the sea came into view.

It was far colder on the shore than it had been amongst the houses. The wind, whipping off the sea, took my breath away and seared my exposed skin. I tried, unsuccessfully, to pull my scarf up over the bottom half of my face. Although the pink and purple light of dawn was hours away, the white clouds over the water  and the snow covered ground seemed to be trying to light the world. Across the small bay a thin line of lights glittered like a string of fairy lights dropped on the ground. My icy fingers fumbled with the camera as I tried to capture the moment. The strong wind and my shivering turned my photo into a blur. 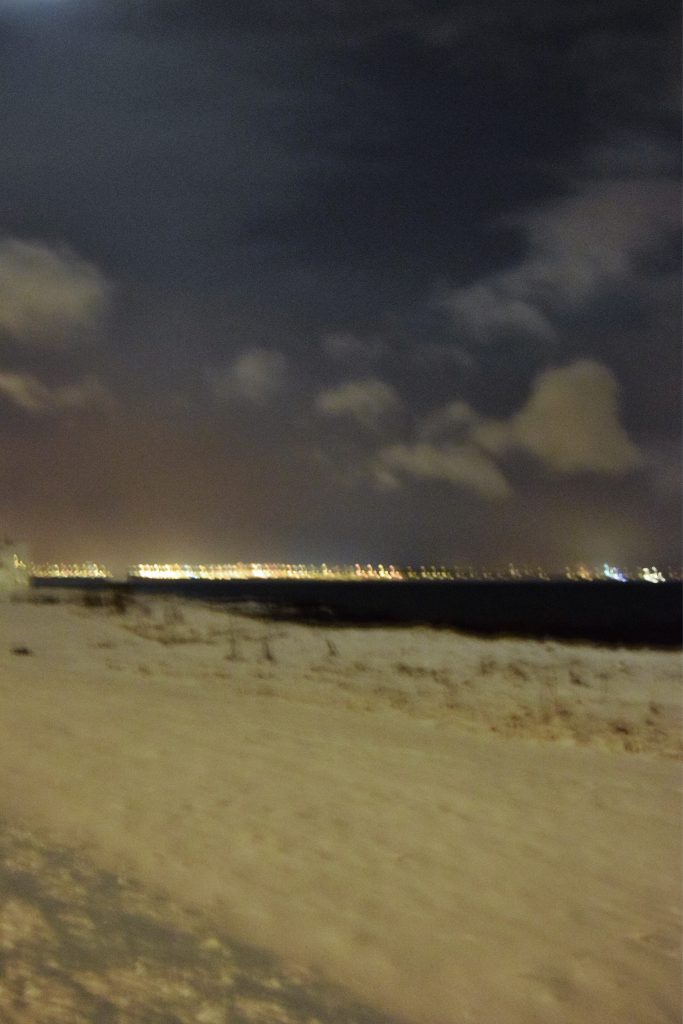 Turning my back against the wind I walked slowly along the shore. When I set out the sky had been dark and clear and, even though I knew the chances were a million to one, I half hoped I might see the aurora again here on the dark shore. In the fifteen minutes it had taken me to walk the half mile through the snow to the sea the clouds had been gathering, or perhaps there’d been hiding over the water all along. Either way, it was fairly obvious there would be no shimmering green for me this morning.

A little way ahead I spied some ramshackle buildings on the foreshore so, taking careful note of the houses on the corner where I’d left the road, I headed towards them. As I walked little flakes of snow whipped up into my face, carried by windy eddies, or so I thought at first. The buildings turned out to be a collection of small boat houses, some clad in painted corrugated iron others stone and wood. A white boat was pulled up on the shore beside them 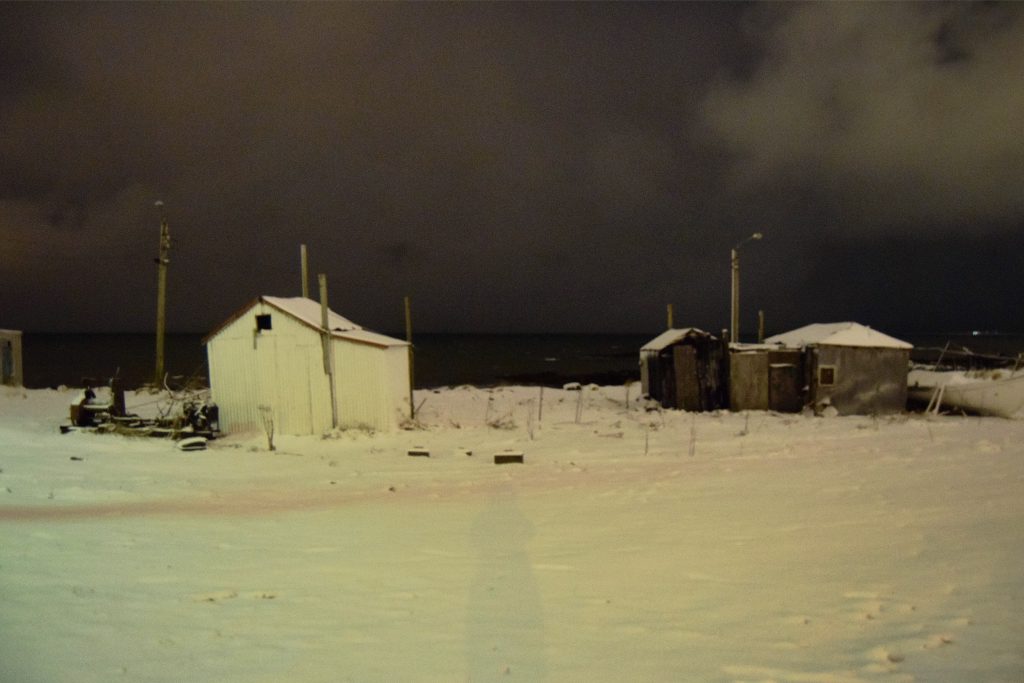 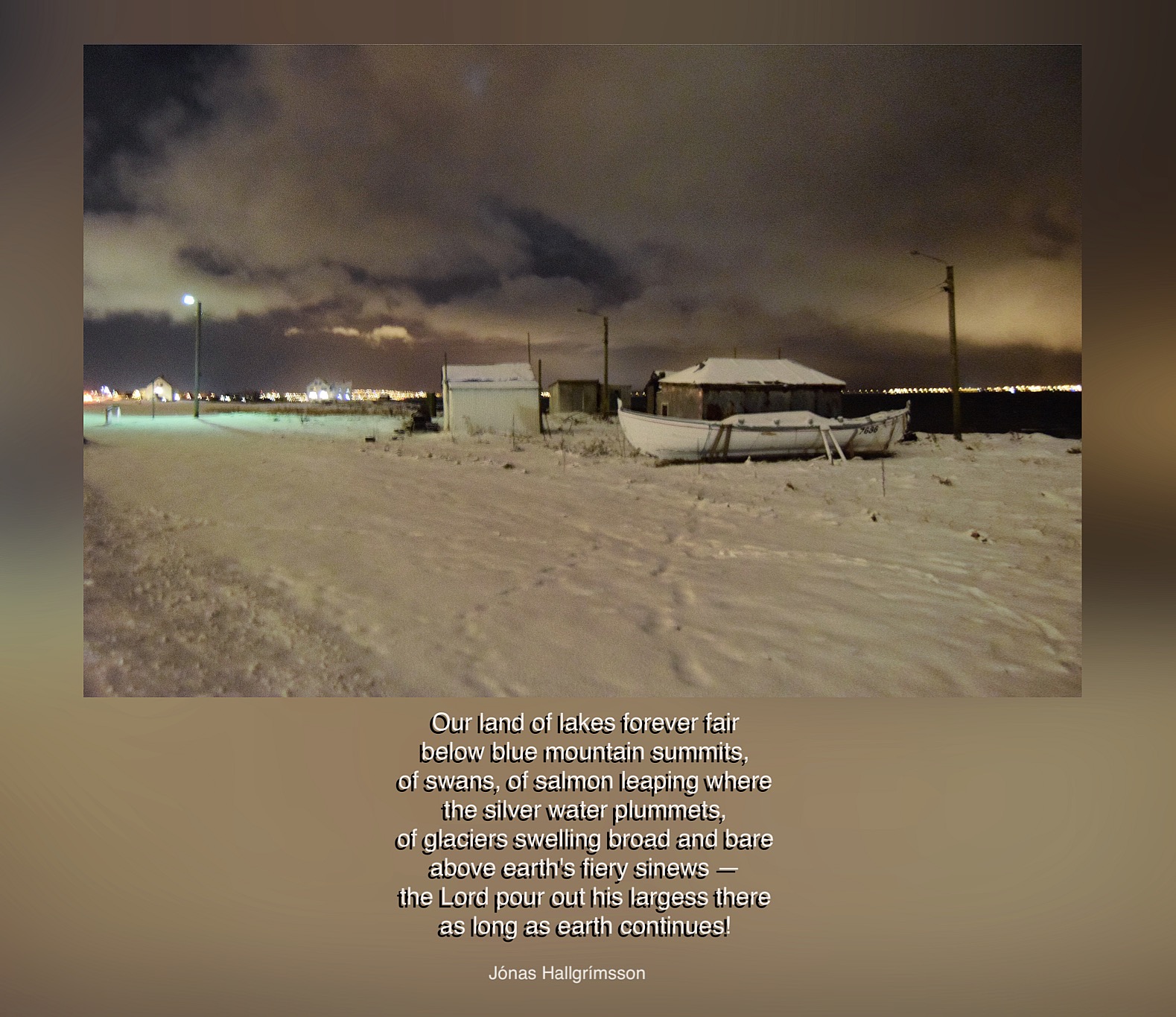 When I’d done my best to capture the boat houses in the frozen darkness I walked on towards the lights of the city ahead. The path along the foreshore looked as if it had been ploughed and, apart from a few animal prints, a fox or a cat perhaps, no one had walked on it since. It curved along the bay and, briefly, I thought I might head towards Seltjarnarnes and the lighthouse in the small island peninsular of Grotta, about four miles away. On another day it would have been an easy walk but it soon became clear the tiny snowflakes were not being blown from the ground at all, they were falling from the air. 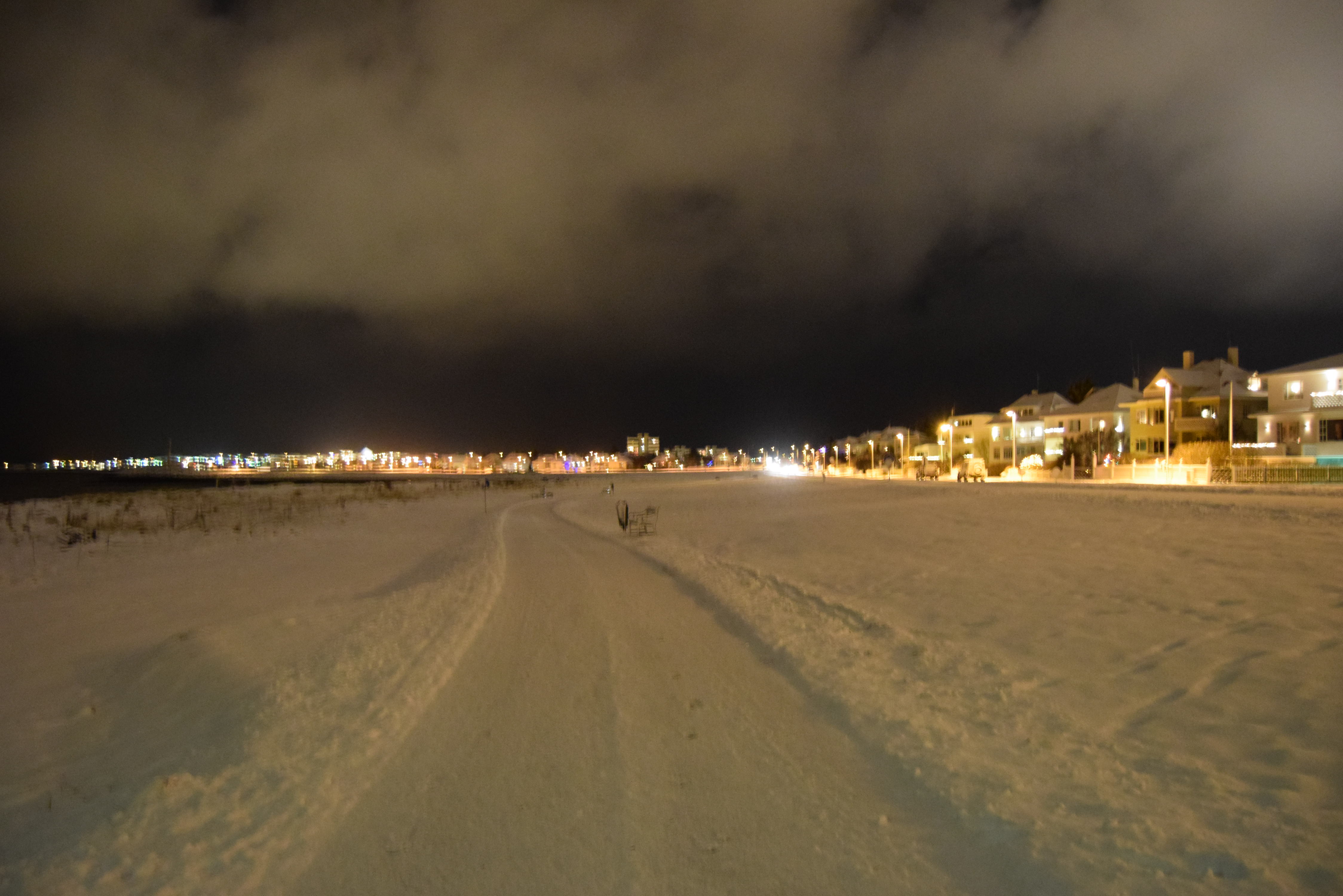 For a while I carried on but, as I walked, it occurred to me I’d be walking into the wind and snow on the way back and the snow was beginning to fall faster with every minute that passed. In the end I realised I’d have to turn back or risk being caught on the exposed shore in what could quickly turn into a blizzard. 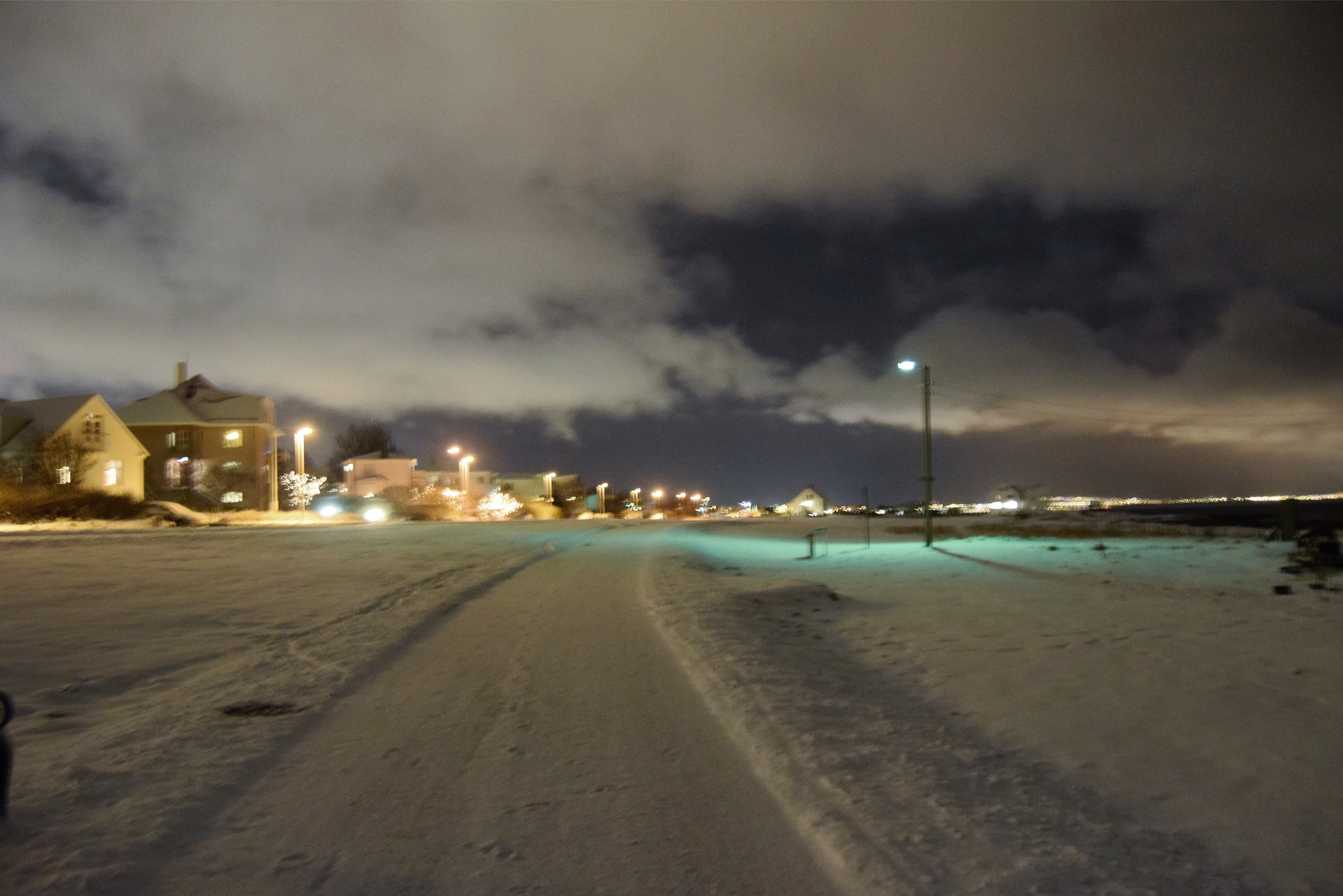 Now I was battling against the wind. Bitter and strong, it dashed the snow into my face, turning tiny flakes as light as feathers into stinging needles. Luckily, the snow was still light, undecided whether to stop or get worse at this point. Even so, my eyes were watering and it was a struggle to keep moving forwards. 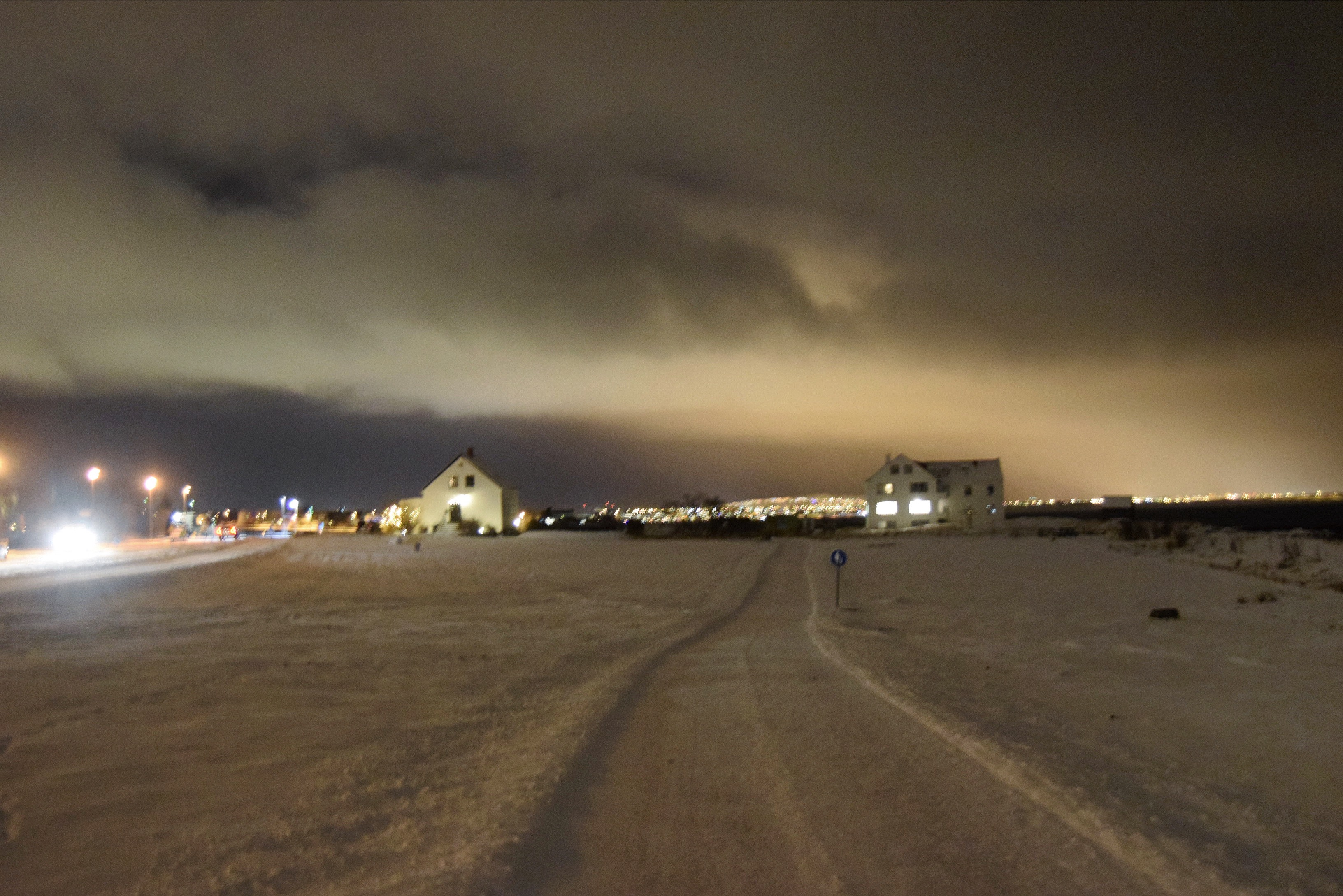 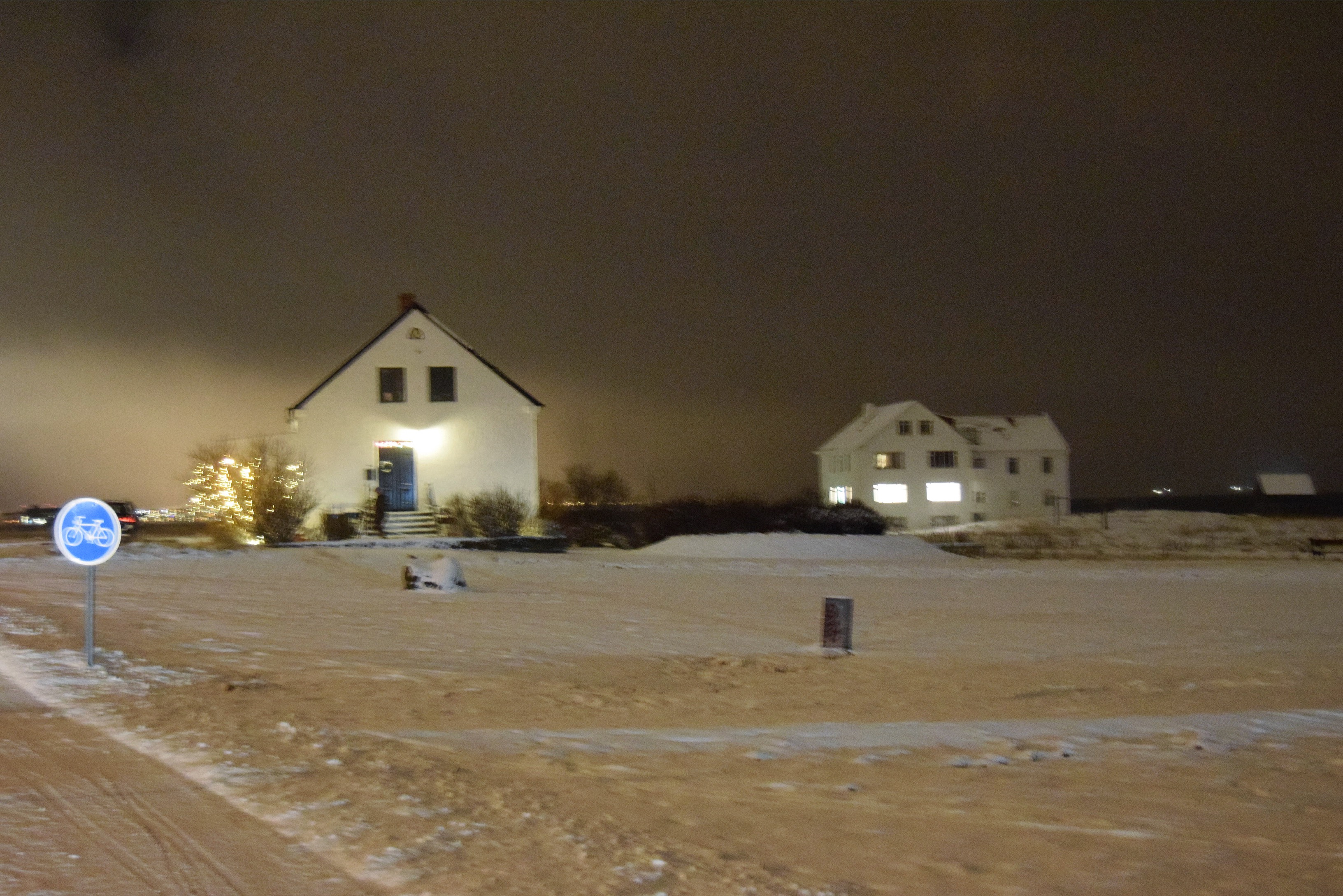 In an attempt to get out of the wind, or at least gain some shelter, I crossed the road and walked close to the walls of the houses. A car passed by, the studded tires loud on the snow covered tarmac. The world was beginning to wake up and go about its business. Other cars, on driveways and parked at the kerb were blanketed in white. It looked as if it would take more than a few slammed doors to clear them. 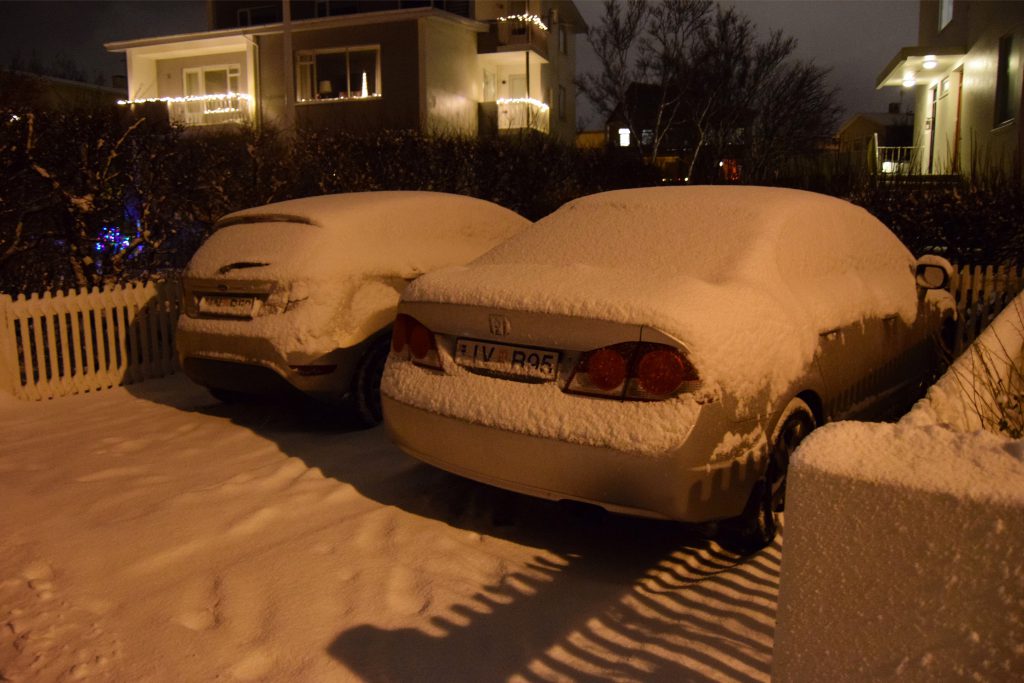 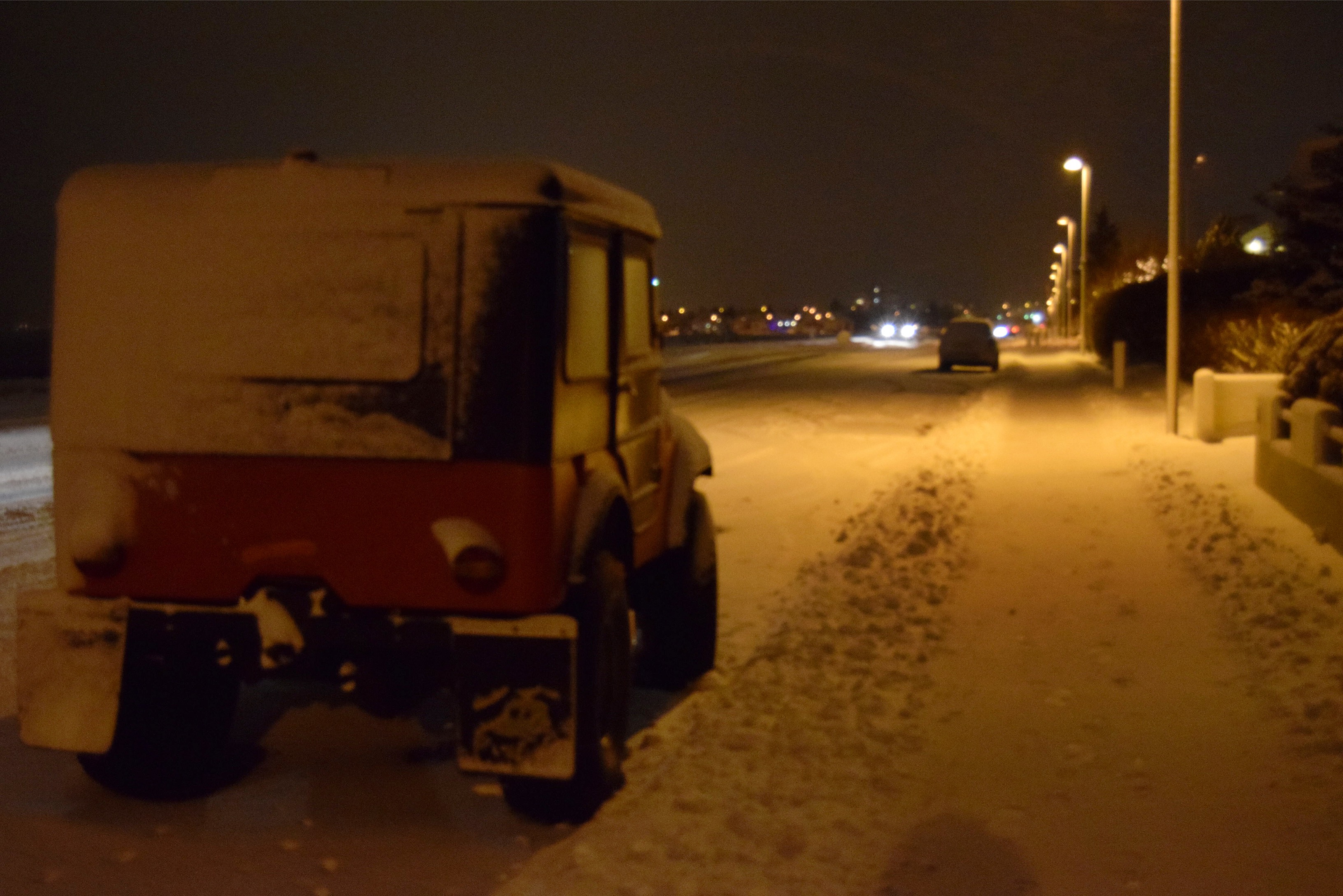 Now the snow was falling faster, swirling in front of my eyes. With a slight feel of panic I realised I couldn’t tell where the turning was to get back to the hotel. By now I’d passed several roads and, from the little I could see, none looked familiar. As I was beginning to give up hope and take a random turn in the hope it would take me back to the roundabout a glittering tree with a snow covered bike leant against it gave the game away. This, I was fairly sure, was the right turning. 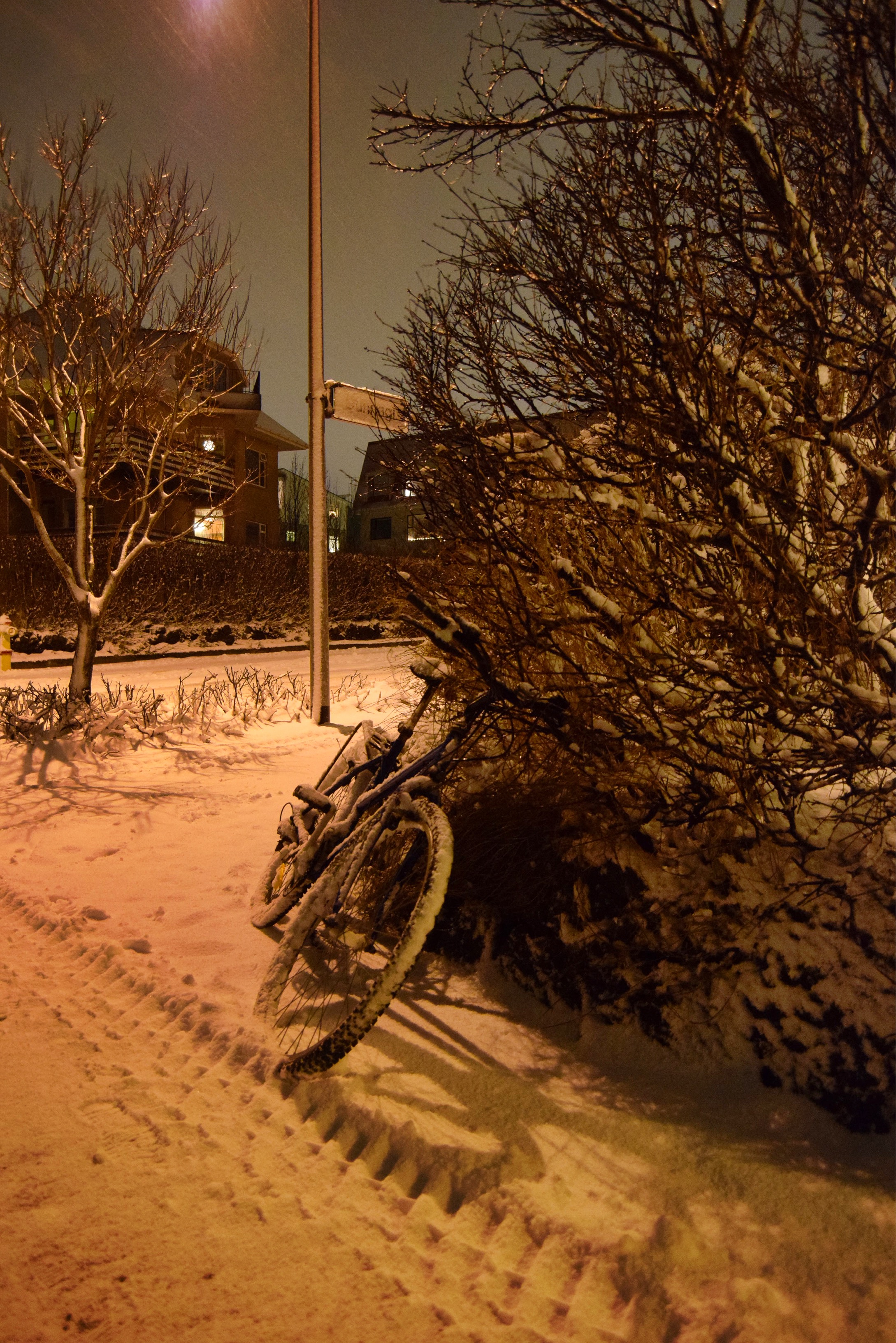 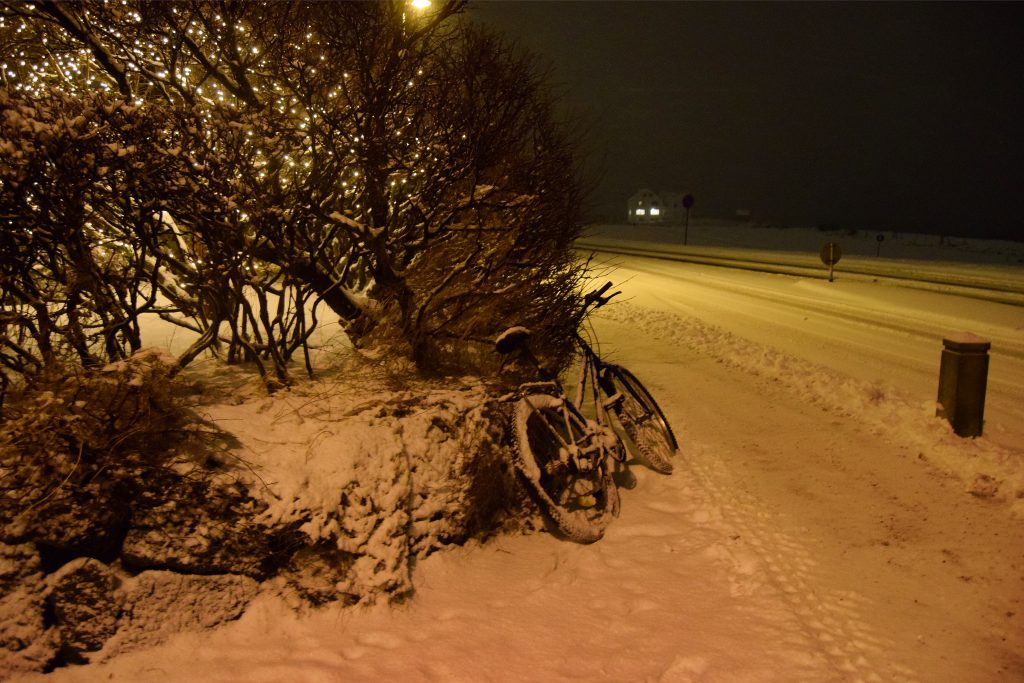 Further along a carport festooned with lights told me I’d made the right decision, although the snow was coming down so hard by now I could barely see through my glasses. Now it was all about putting one foot in front of the other. Of course, I began to worry about Commando, it would be snowing on him too. He had far less clothes on than I and would, no doubt, be further away from the hotel. 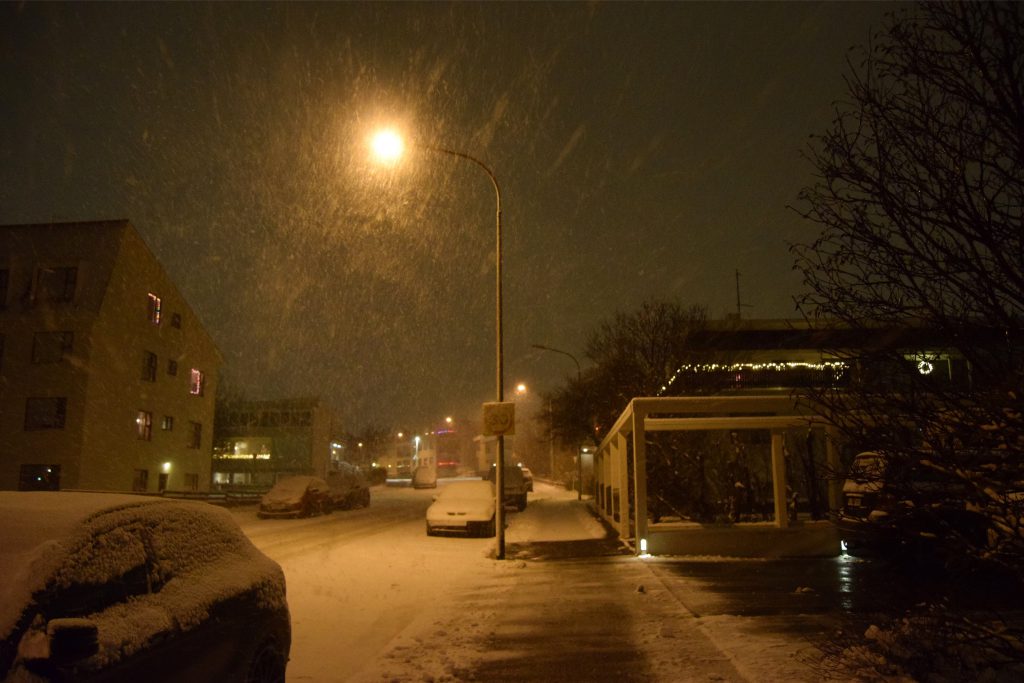 Probably I should have put my camera away when the snow started but it was covered by the wooden cape I was wearing over my Arctic coat and I couldn’t bear the thought of stopping to take off my gloves and open my bag. Besides, these were some of the last pictures I’d be able to take in Iceland and I wanted to capture the feel of the falling snow and the dark streets. 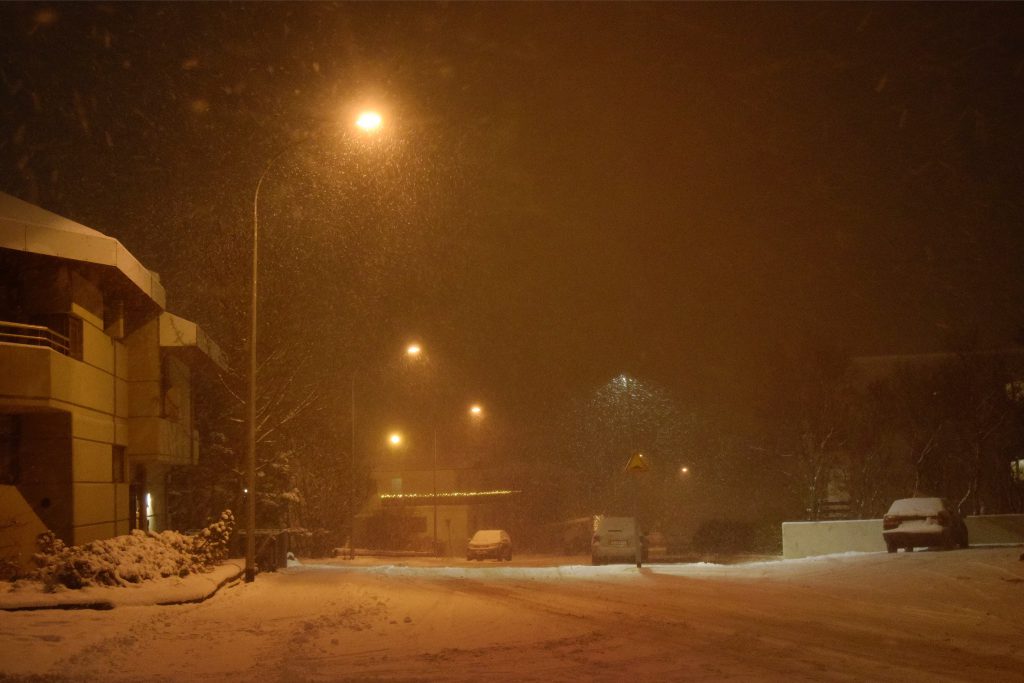 By the time I got back to the roundabout outside the hotel the snow had stopped as quickly as it had started. On the corner another bike looked as if it had been made of snow and I wondered how anyone could possibly cycle on these icy streets? With the snow now stopped I was tempted to keep on walking for a while.  For a moment or two I stood outside the hotel dithering and wondering how much longer Commando would be out running. Perhaps if it had stopped snowing while I was still on the shore I might have but now I was a little like that bike, covered in a thick layer of snow and feeling the cold. I’d been out for about an hour. 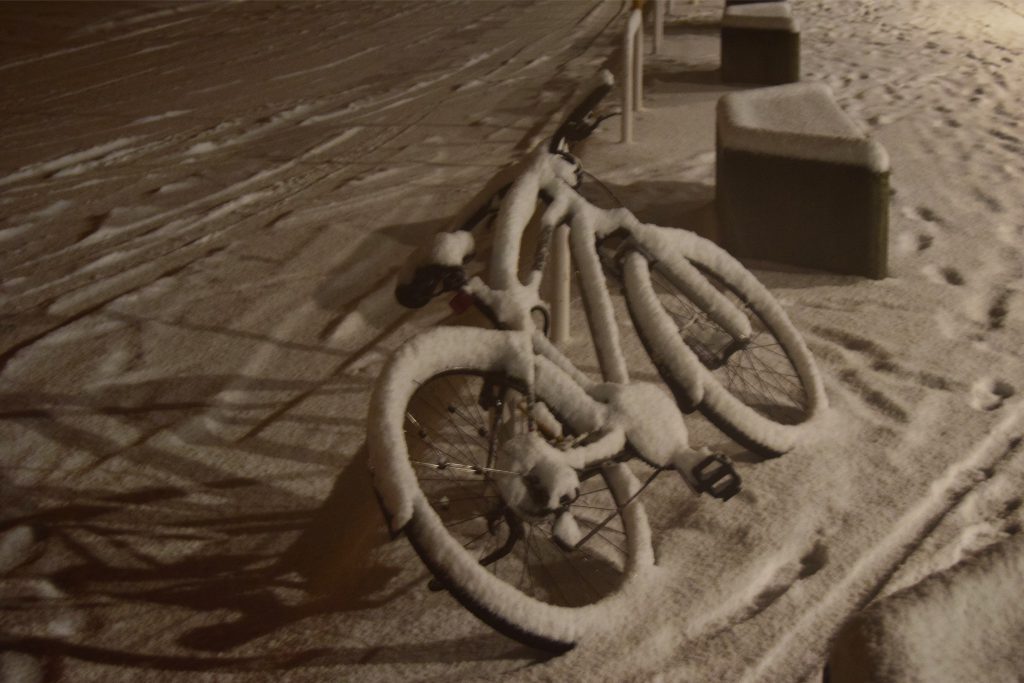 Just before I went inside the snowplough went past, perhaps the same one that had cleared the beach path? Living in Southern England I’ve never actually seen a snowplough before so I quickly whipped out the camera and took a photo. Somehow I’d expected a huge lorry rather than a little pickup truck but it seemed to be doing the job, even if the constant falling of snow meant it was a temporary thing. 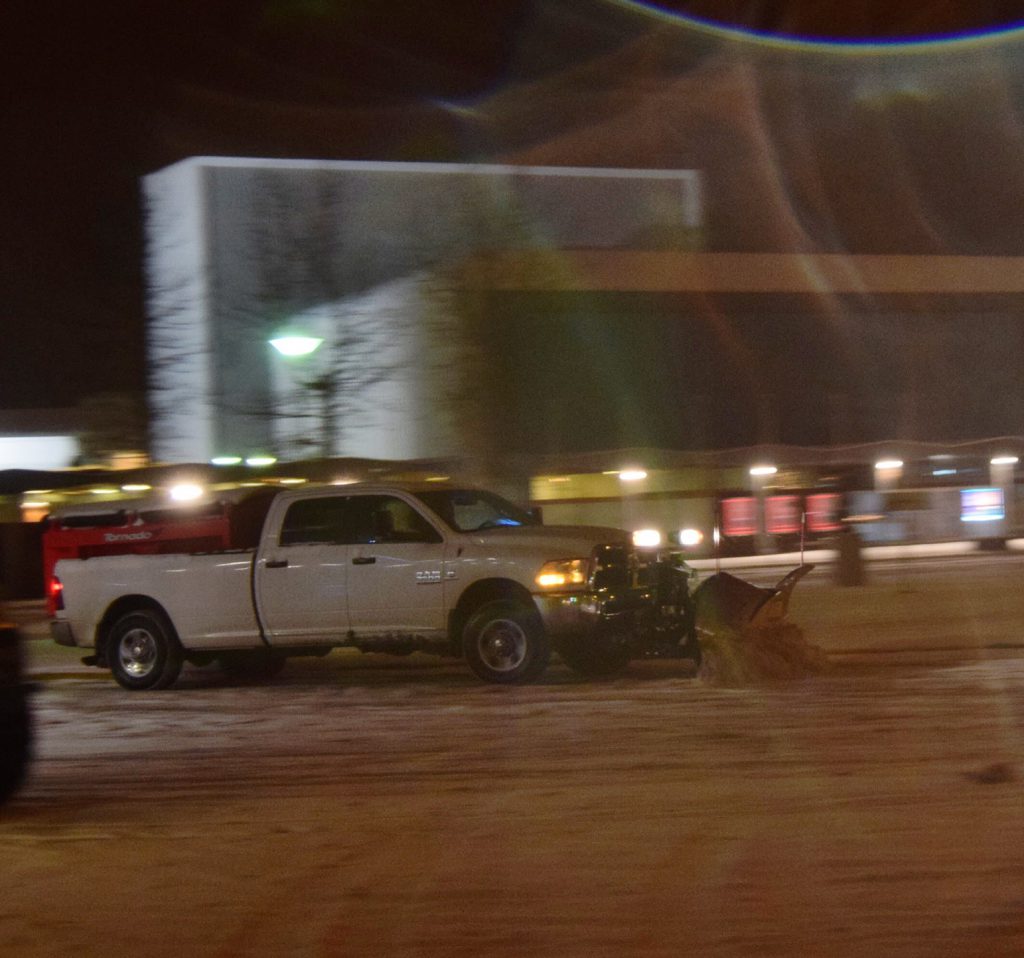 Commando came back from his run while I was still stripping off my wet outer clothes. He was cold, wet and covered in snow but otherwise unharmed. In fact, he said he’d enjoyed the run. After a late breakfast and packing the last of our things we took one more short walk. By now it was light. We didn’t go far, just to the cake shop on the corner for one last coffee and a bag of biscuits for our plane journey. 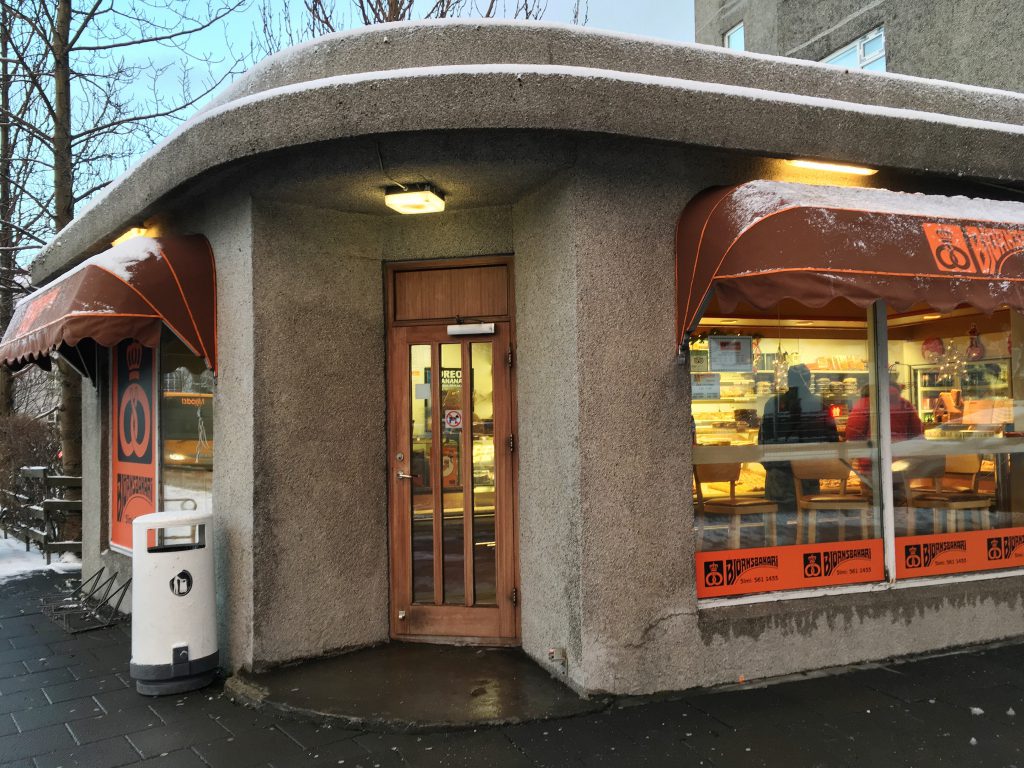 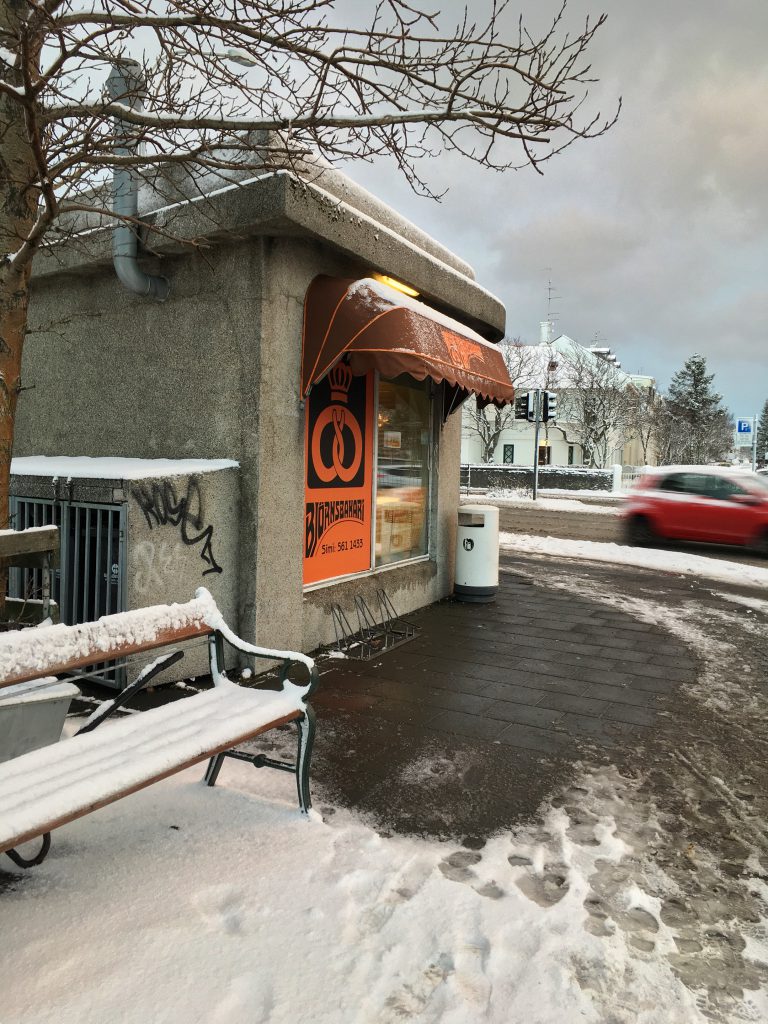 The sun was coming up over the cemetery across the road as we left the cake shop. With a little more time I’d have liked to have a wander through in the light but our airport transfer would be arriving soon. The best I could do was a quick snap of the dawn sky and the snowy pine trees.

So that was the end of our Iceland adventure. Outside the hotel the Yaktrax came off for the very last time. They’d served me well. 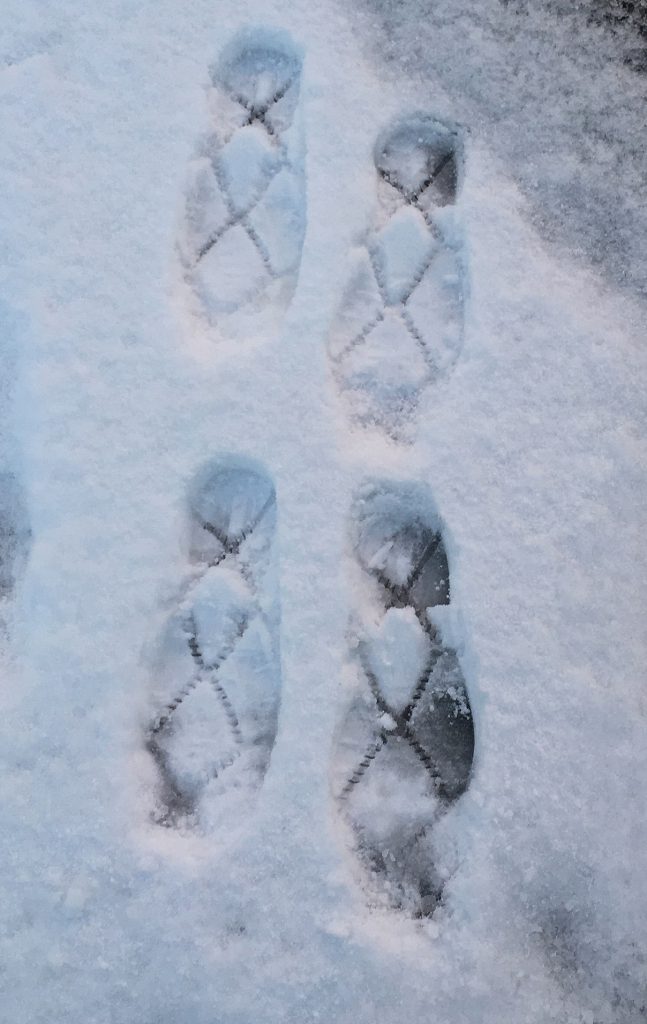 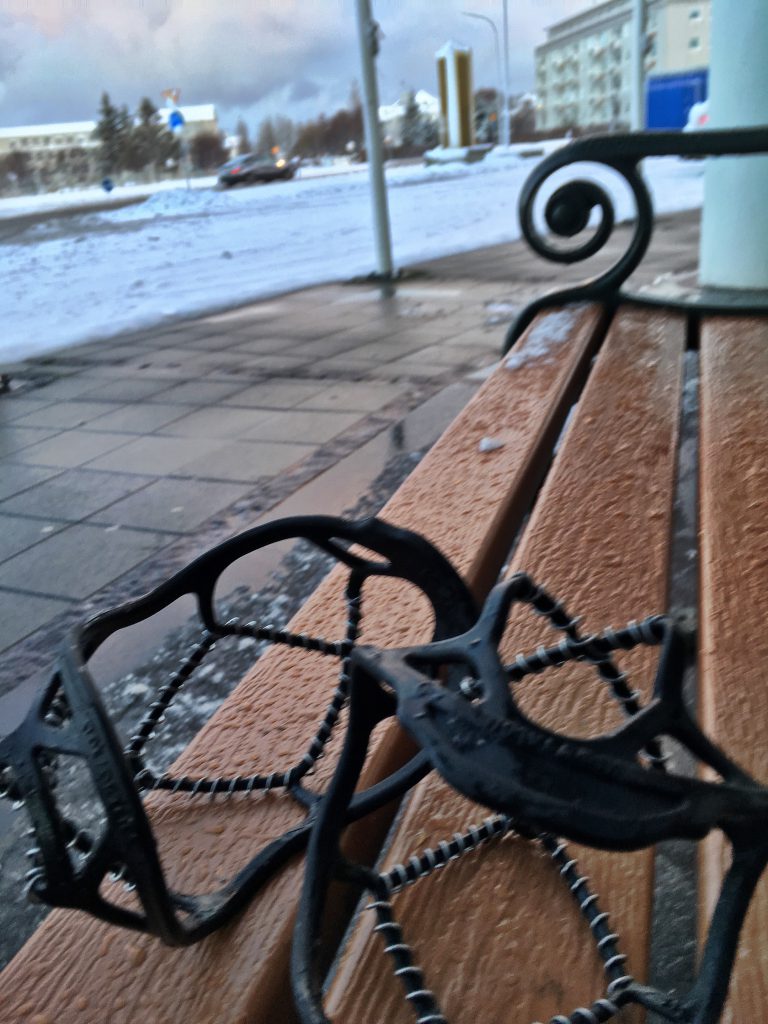 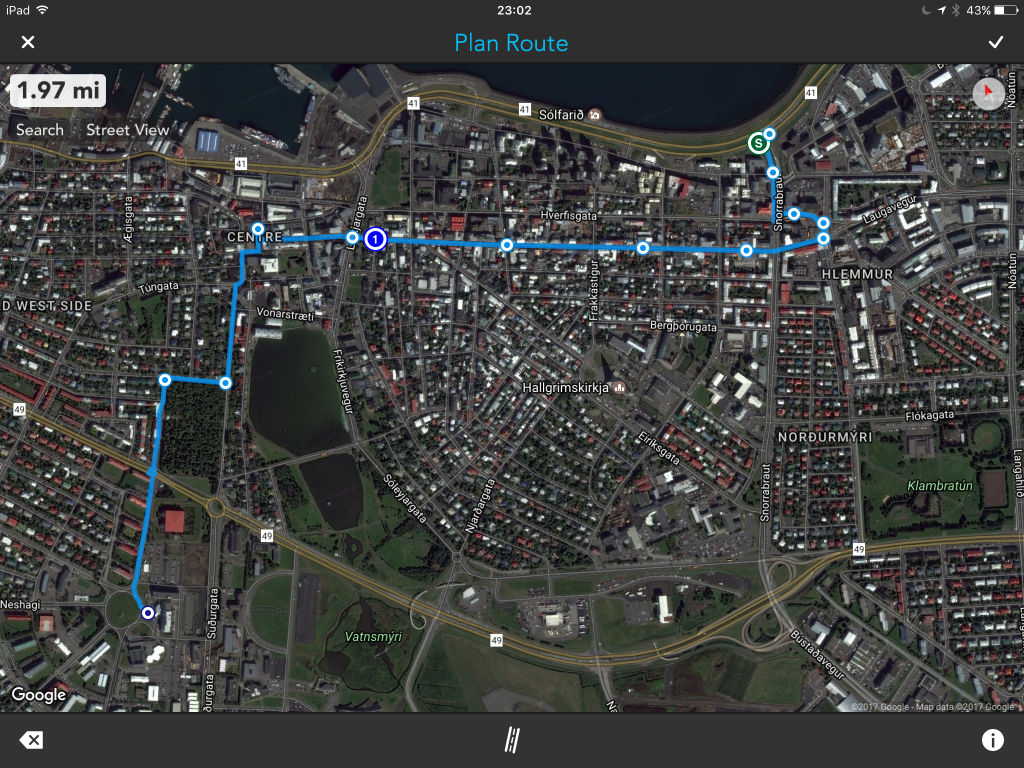 4 thoughts on “The last Icelandic saga”