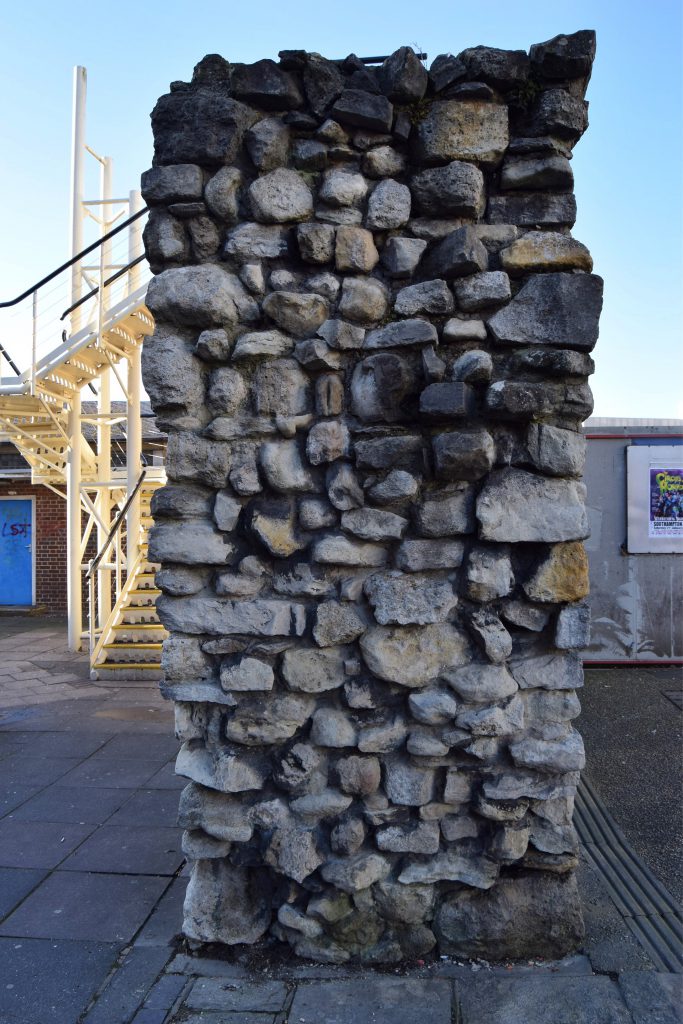 Our little tour around the inside of The Bargate  had been far shorter than CJ and I would have liked and it left us wanting more. Short of breaking into the rest of the building, which would have probably only resulted in us seeing the inside of a police cell, we decided to have a coffee instead. Normally this would mean a short walk to Costa on the High Street but, today, I had a better plan.

In early 2015, when work first began on the new WestQuay Watermark development, we could hardly believe it was finally going to happen. There’d been years of talks and plans for the development of the old Perrelli site but it never seemed to get beyond talk and plans that changed every five minutes. When the first huge piles were driven into the wasteland that had been used as a car park for years, there was still an element of ‘I’ll believe it when I see it,’ about the whole thing. For two years we’ve watched with interest as the huge building has slowly grown. Last time we were in town, just before Christmas, the cafes and restaurants looked to be preparing to open. Now it was time to check them out.

We walked along the line of the medieval wall, or where it was before they knocked it down in the 1930’s. Ironically, the road it was removed for is now closed and the area around The Bargate has been pedestrianised. What a shame they didn’t have a crystal ball back then. If they could have seen into the future the wall could have been saved.

When we reached the next section of wall we found the gate to the rickety bridge open. It’s been closed for a long time, probably due to the building work, so this was a pleasant surprise. We climbed the metal steps and stood for a while, looking towards Bargate and trying to imagine what it must have been like to walk along the top of the wall all the way to Polymond Tower and probably beyond. Recently there has been talk of restoring the walls here. Part of me thinks this is a great idea but I can’t help thinking of Koln, where they have restored their medieval walls and they look a little too perfect, as if the history has been lost. 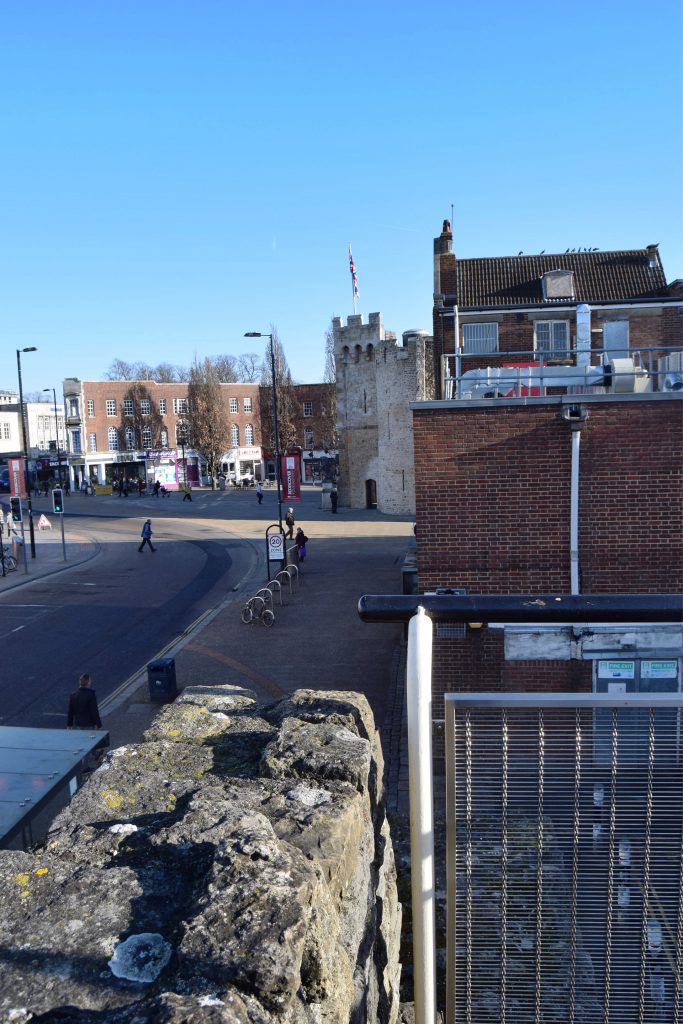 When we got as far as Anthony Griffiths 1991 statue of John le Fleming, mayor of Southampton in 1319, we could see the new Watermark building. The black cladding CJ hated so much has now be covered with striations of metal tubing, creating a curved, wave shape. 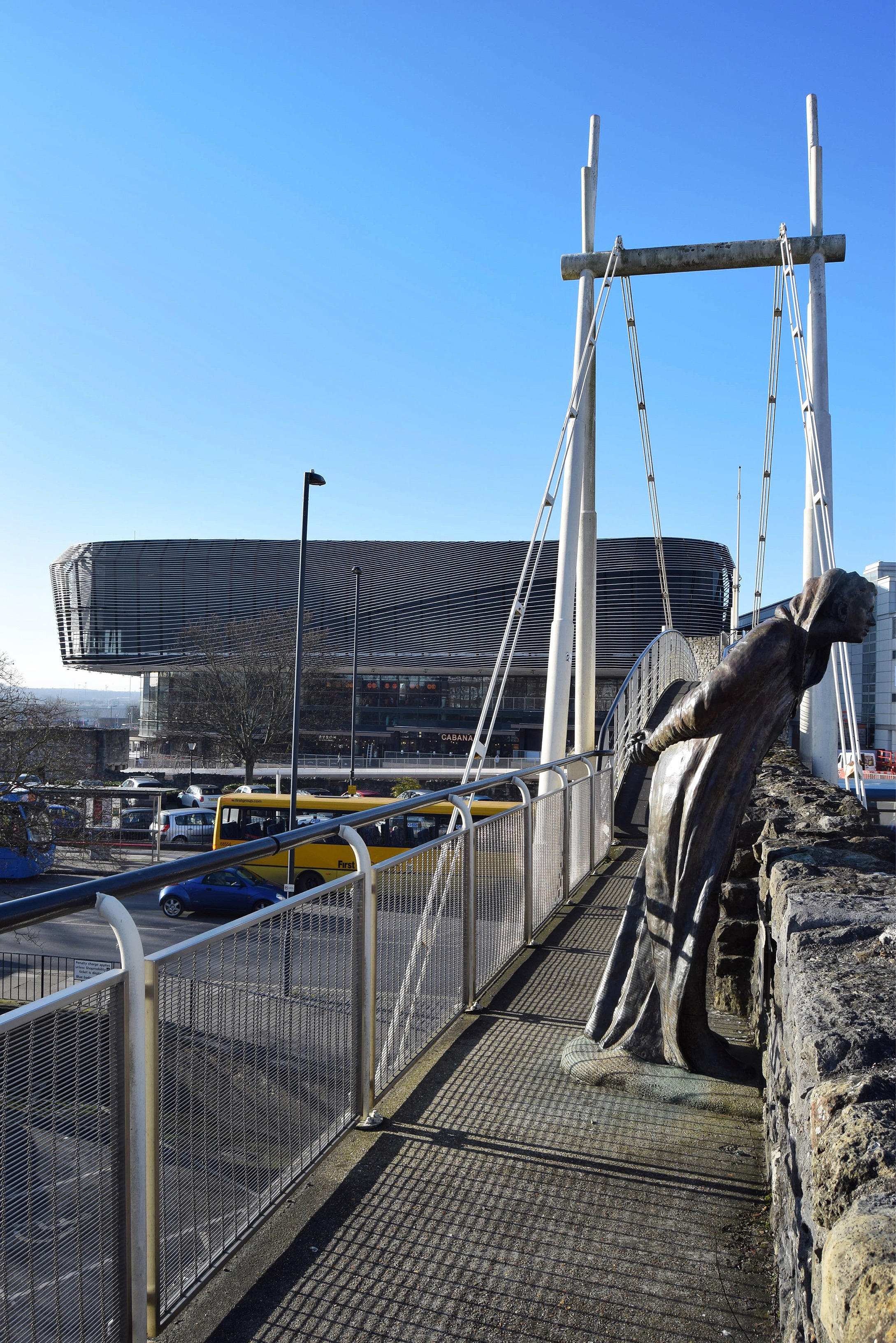 Crossing the bridge over West Quay road gives the illusion that the walls are intact here, although, like the wall on either side of Bargate, a huge section was demolished to make way for the road back in the 1930’s. On the other side of the bridge we climbed the stone steps to Arundel tower, just as so many guards must have done over the centuries as they patrolled the walls and protected the town. 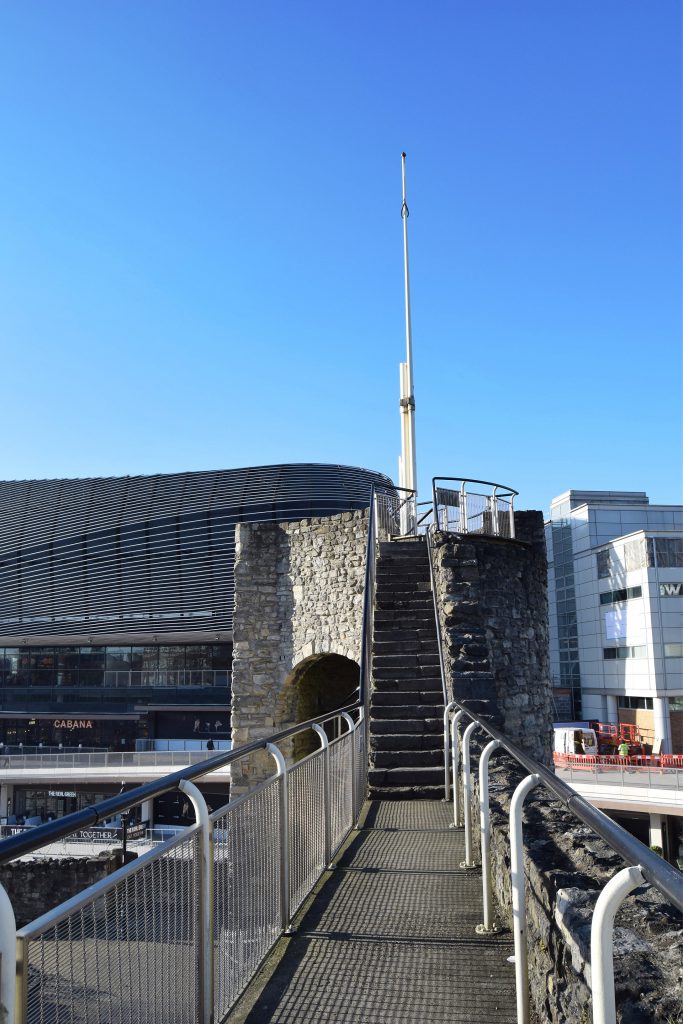 The sixty foot high tower was built in 1290 and named after Sir Bevis’ horse Arundel or, perhaps, Sir John Arundel a governor of the town Castle, depending on which account you believe. In medieval times the guilds were responsible for maintaining and defending the walls and this area was patrolled by the Shoemakers, Curries, Sadlers and Cobblers Guild. Back then the sea came right up to the walls and it was a windy, inhospitable place, nicknamed Whindwhistle Tower. From here we had a wonderful view of the new building and could see right down Western Esplanade all the way to the sea. 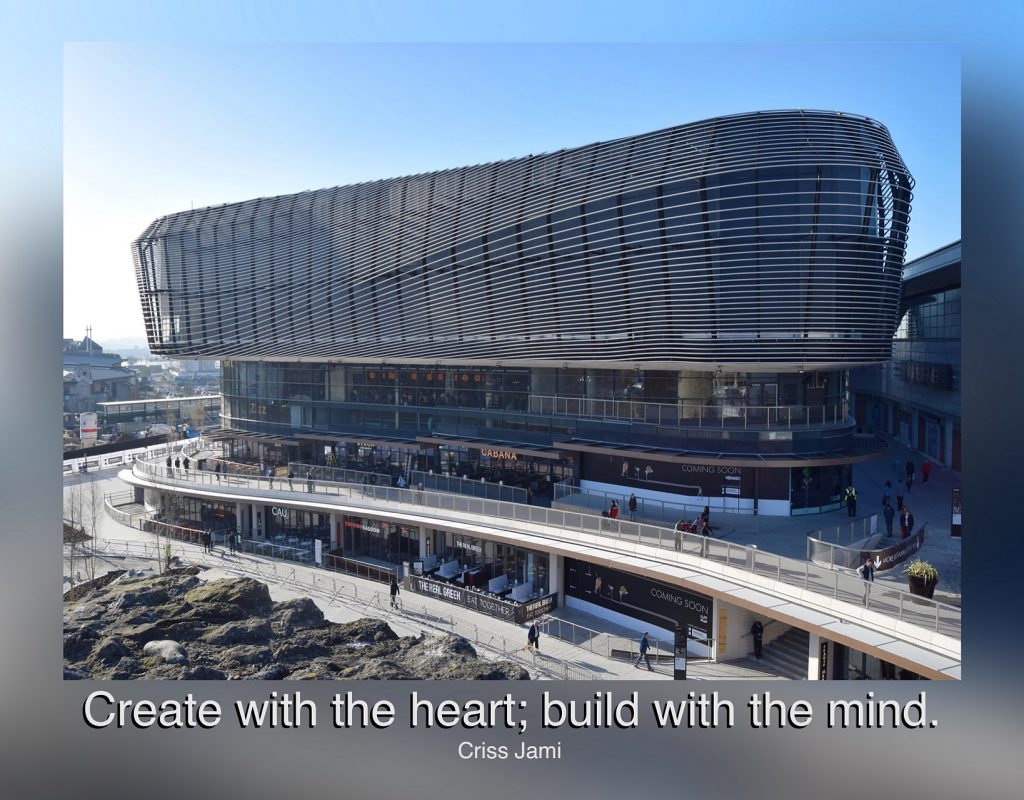 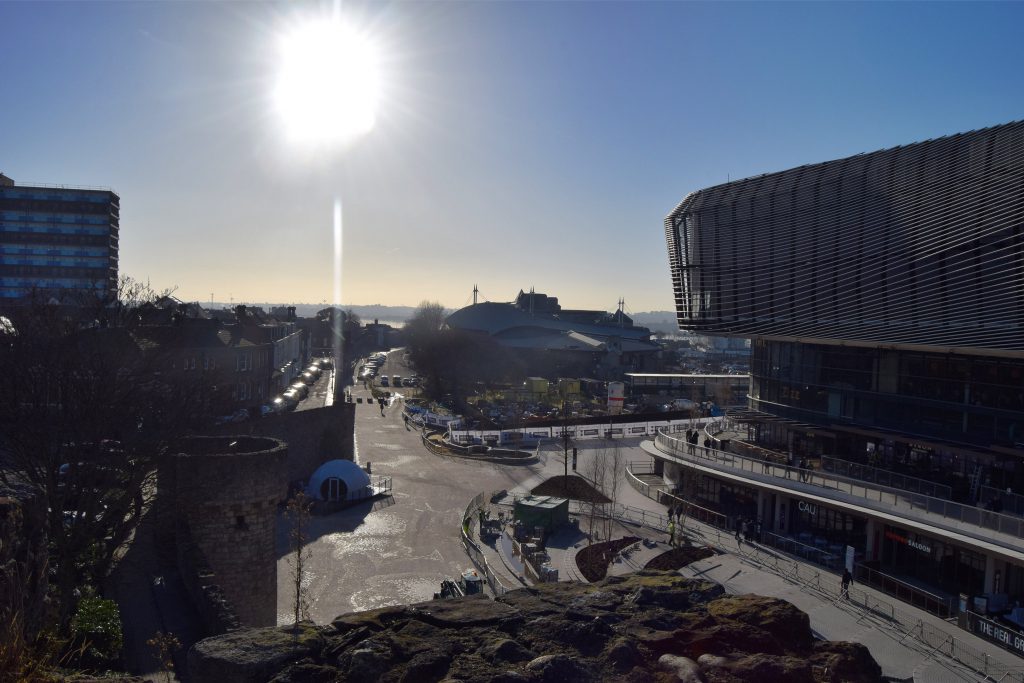 Slowly we descended the spiral staircase inside the tower, stopping a couple of times to look back along the wall towards Bargate through the arch and through one of the arrow slits towards WestQuay. Of course the poor guards would not have had such modern steps to walk down. The combination of worn stone steps and dim lighting, must have made this a precarious journey back in medieval days. 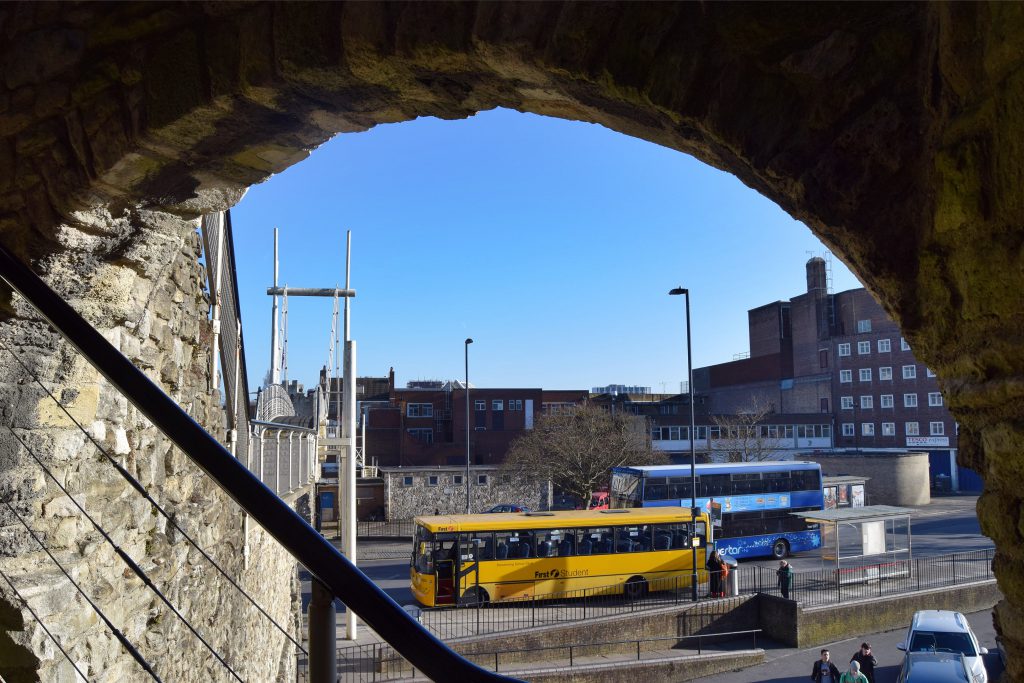 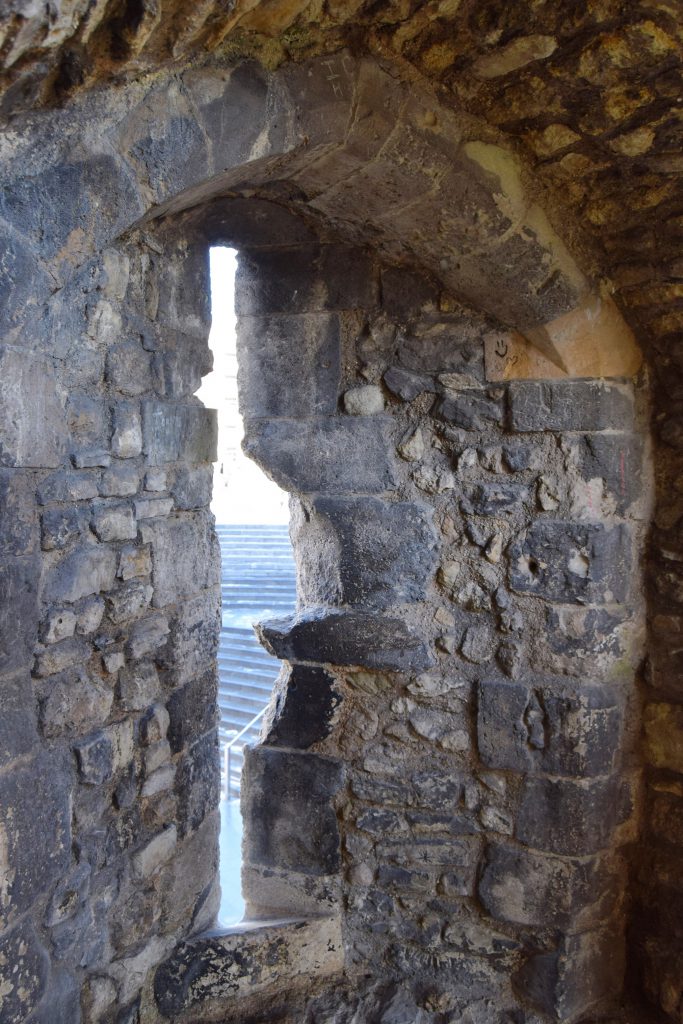 At the bottom of the steps we came to the Tudor gun tower on the North West corner of the wall. From here there is a good view of the back side of the tower and, through the crennalations, the echoing tower of WestQuay. From here it was obvious that work on the new plaza is not yet complete. The place was dotted with men in high vis jackets and hard hats along with piles of paving waiting to be laid. 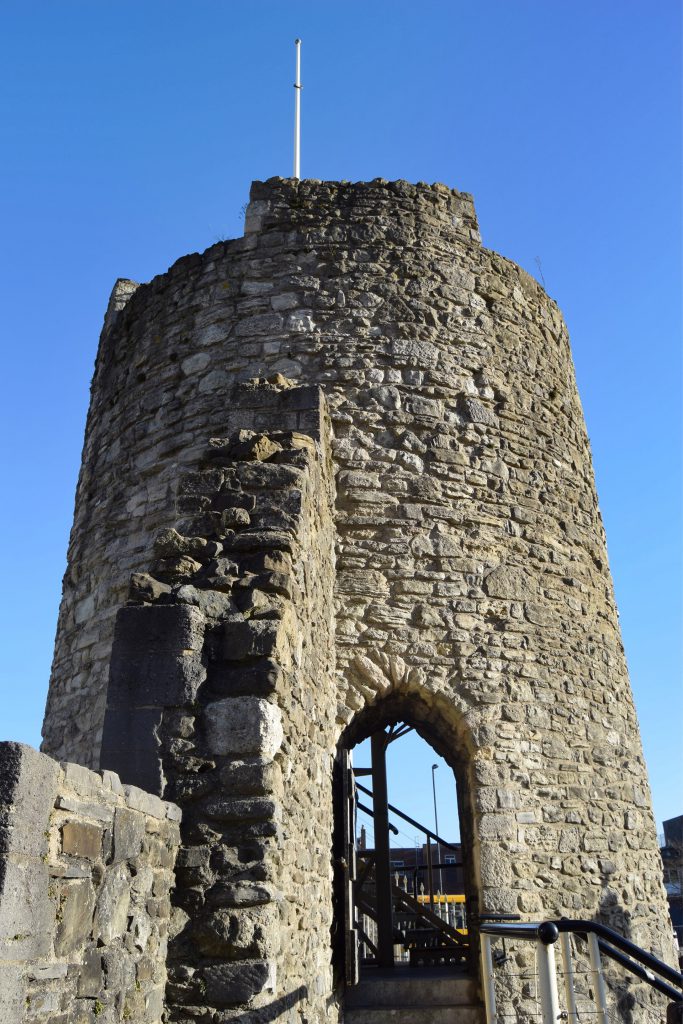 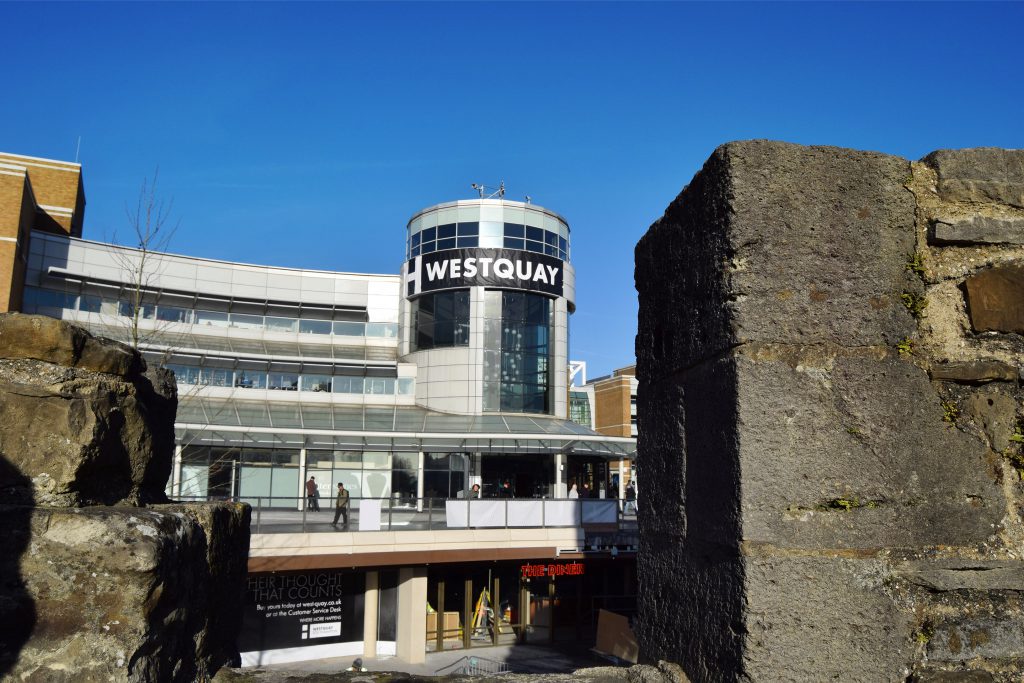 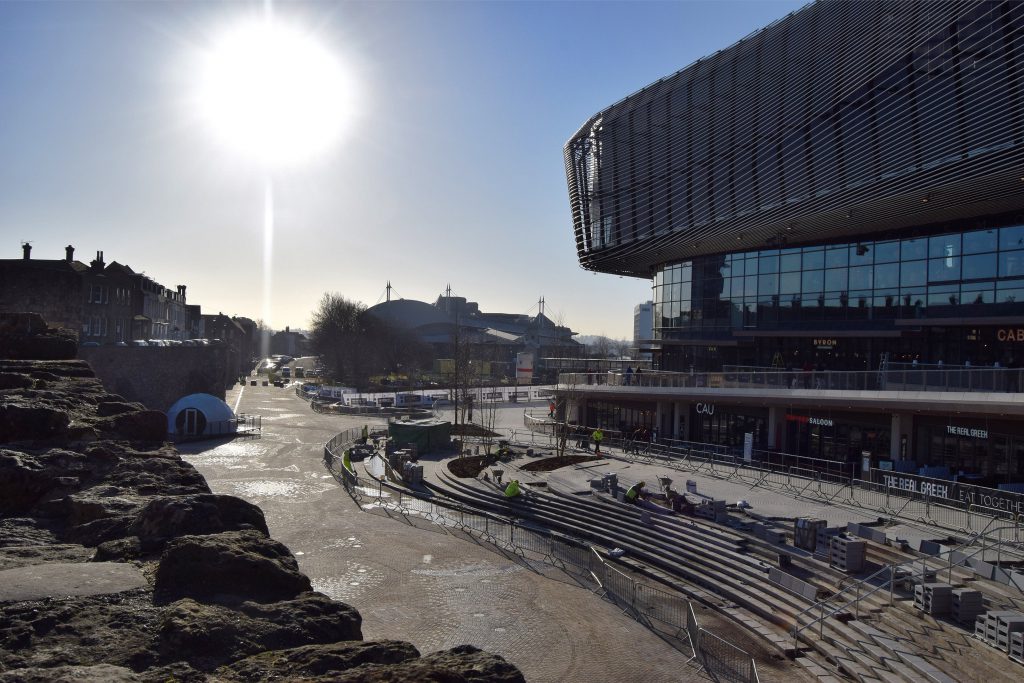 We walked along the battlements, past Edward Tower, better known as Catchcold Tower for obvious reasons.  Built in the early 1400’s to carry cannon, it has some of the earliest gunports in the country and was used by antiaircraft guns in World War II, the last part of the wall used to defend the town.  Today we didn’t climb the steps to the top of the tower, instead we carried on along the battlements towards the forty steps. 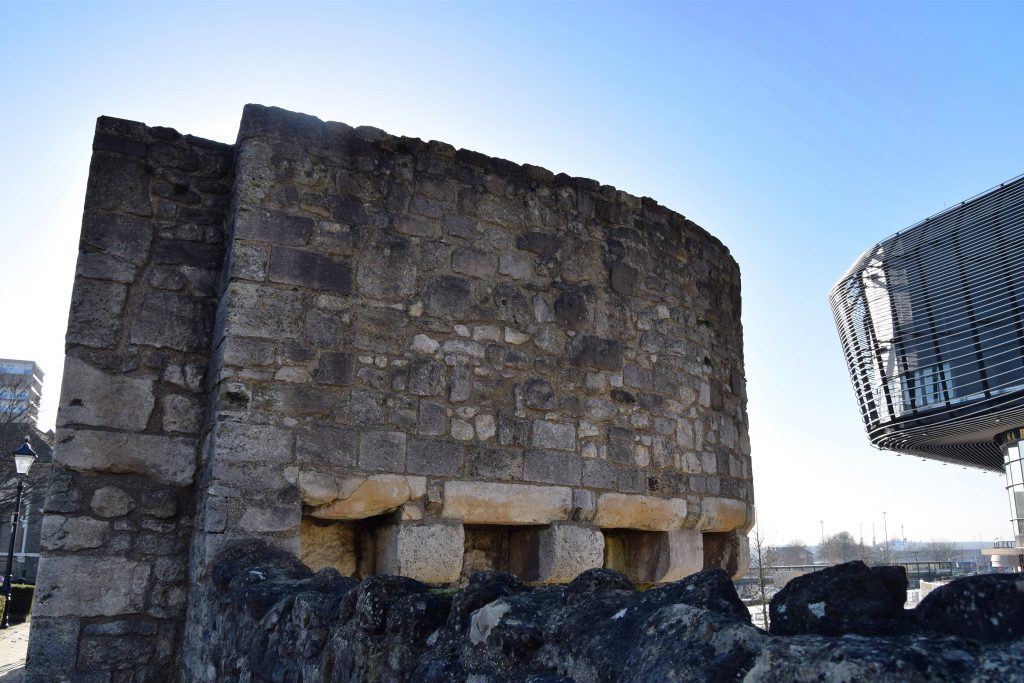 For a long time now the steps have been blocked off because of the building work, meaning a long detour to get down onto Western Esplanade. We weren’t sure if we would be able to get down them today but, as we reached the curve in the wall where the steps are, I was pleased to see the barriers had been removed.  Looking down onto the new plaza, it was hard to imagine that the tide once lapped against the walls here and Jane Austen, along with lots of Sotonians, enjoyed a stroll along the shore to take the air. Jane lived, for a time, in a house close to the curve in the battlements. The steps were built in 1853, to make access to the beach easier and a promenade was added at around the same time. Sadly, Jane didn’t live to see either. 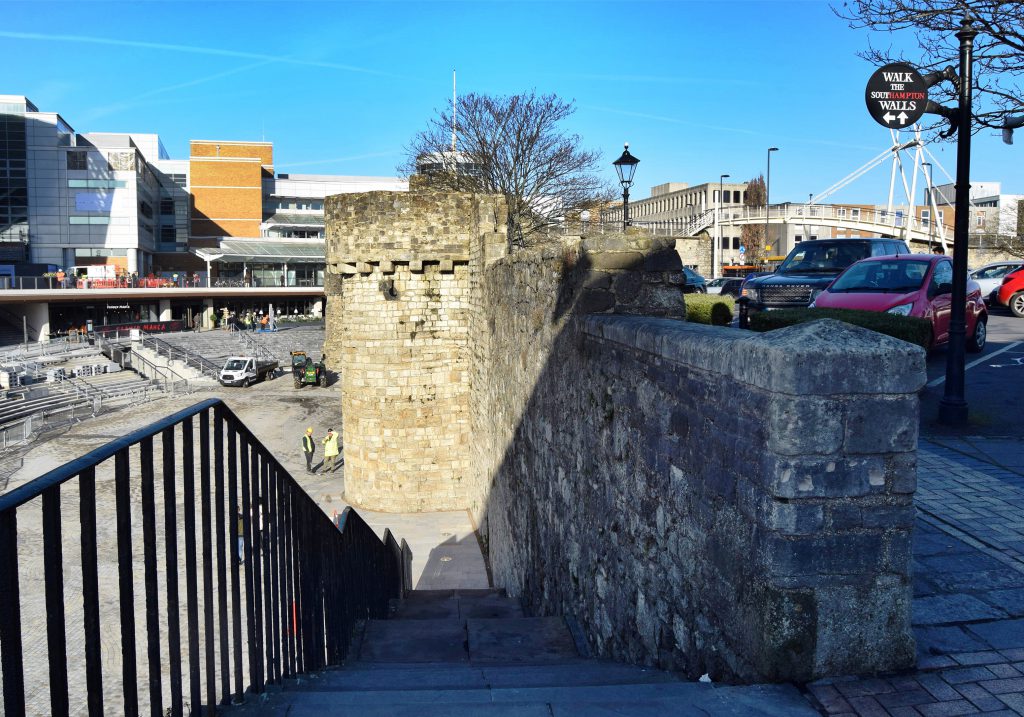 Of course, it’s a long time since the sea came anywhere near the walls here. In the 1930’s land reclamation by the Southern Railway Compnay created the Western Docks. Most of the material used was dredged from Southampton Water and the work meant the Docks could handle larger ships. From what was once the beach, we could get a better look at Arundel Tower and the little Tudor gun tower, along with the new curved steps that have been built to take people from the new plaza up to WestQuay. 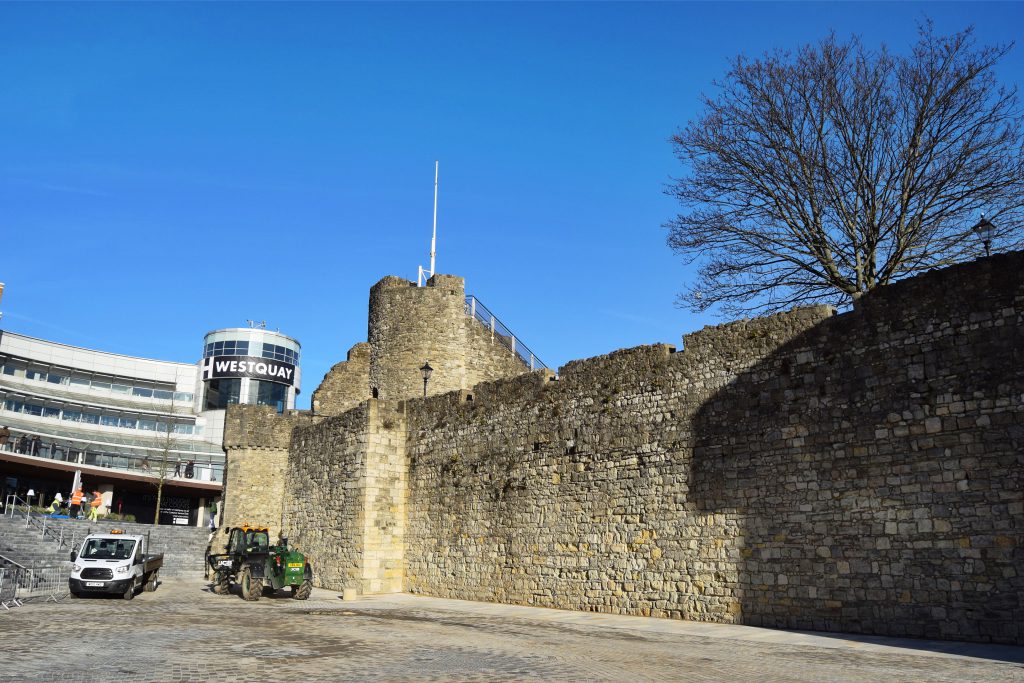 We also got a better view of Catchcold Tower. This was one of the last additions to the walls, built in the early fifteenth century. From below we could clearly see the machicolations beneath the parapet, where stones or boiling oil could be dropped on invaders. We could also see the inverted keyhole gunports accessed from the stone vault beneath the gun platform. Back in the summer of 2015, we were lucky enough to go inside and look out of them. Of course the Watermark Decelopment wasn’t built back then so the view has changed considerably. 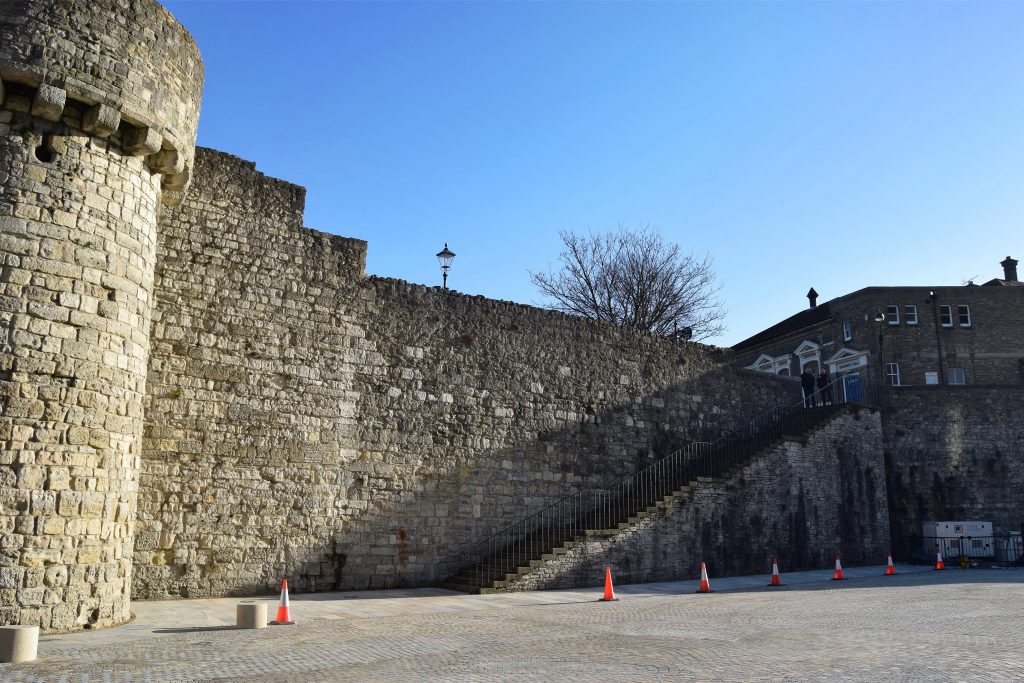 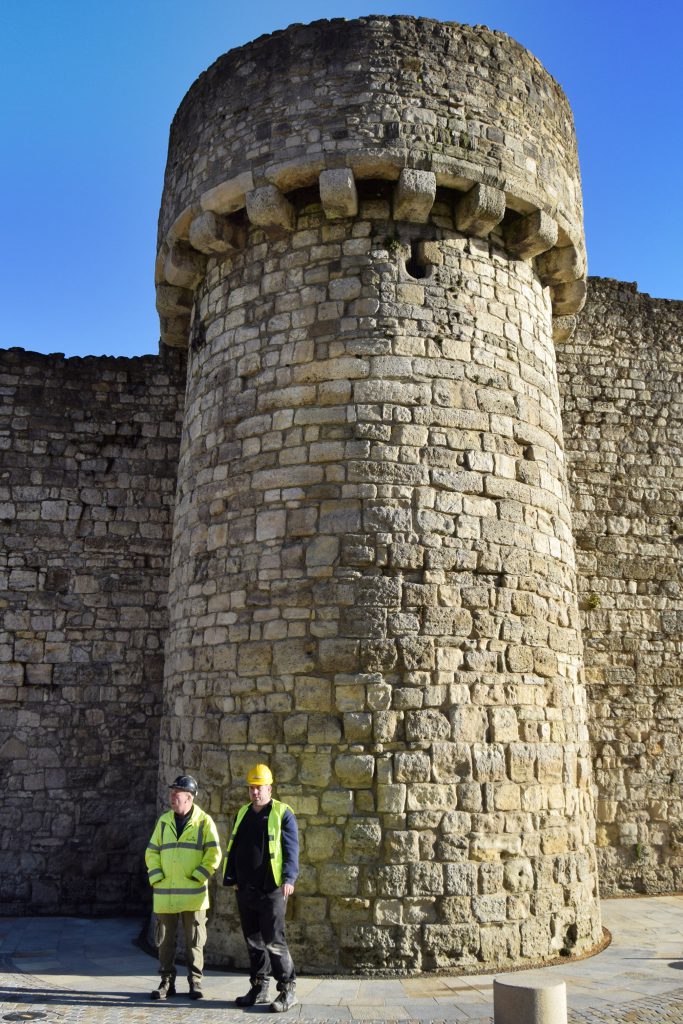 One of the things I was most looking forward to seeing was the plaza and the water featured I’d read about when I first looked at the plans. Sadly, although the paving is largely complete, the water feature isn’t, so I will just have to be patient a little longer. Today, we walked up the curving steps to the promenade, trying to get an overview. The line of these promenade steps supposedly reflects the shape of the original mudflats and tidal edges. The plans said there would be around thirty three fountains and a water feature that would ebb and flow like the tide. At certain times of day it would flood, giving beautiful reflections of the walls and remind us what this area would have looked like before the land reclaimation. We stood for a long time, looking at a solitary puddle and trying to imagine it but we couldn’t. 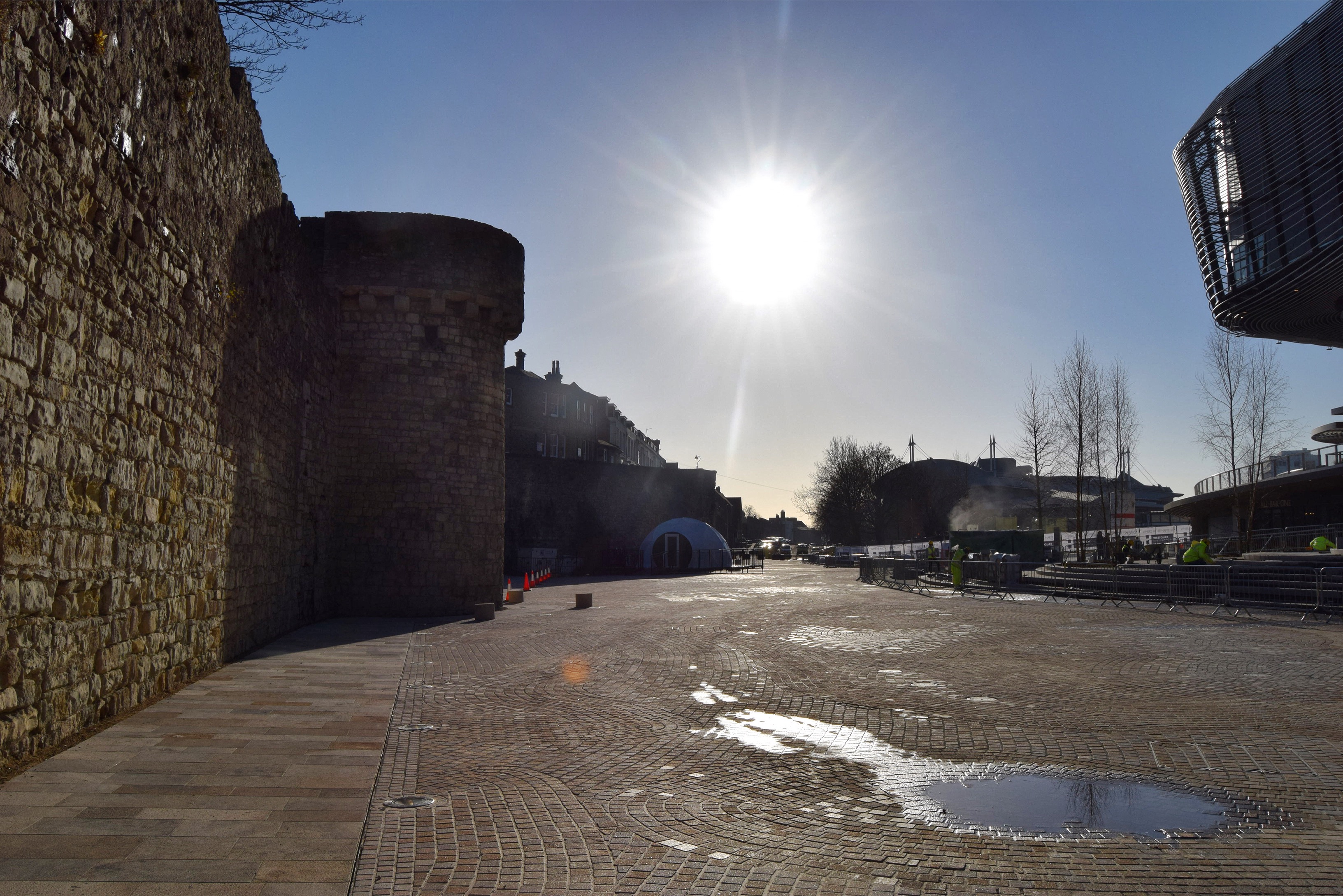 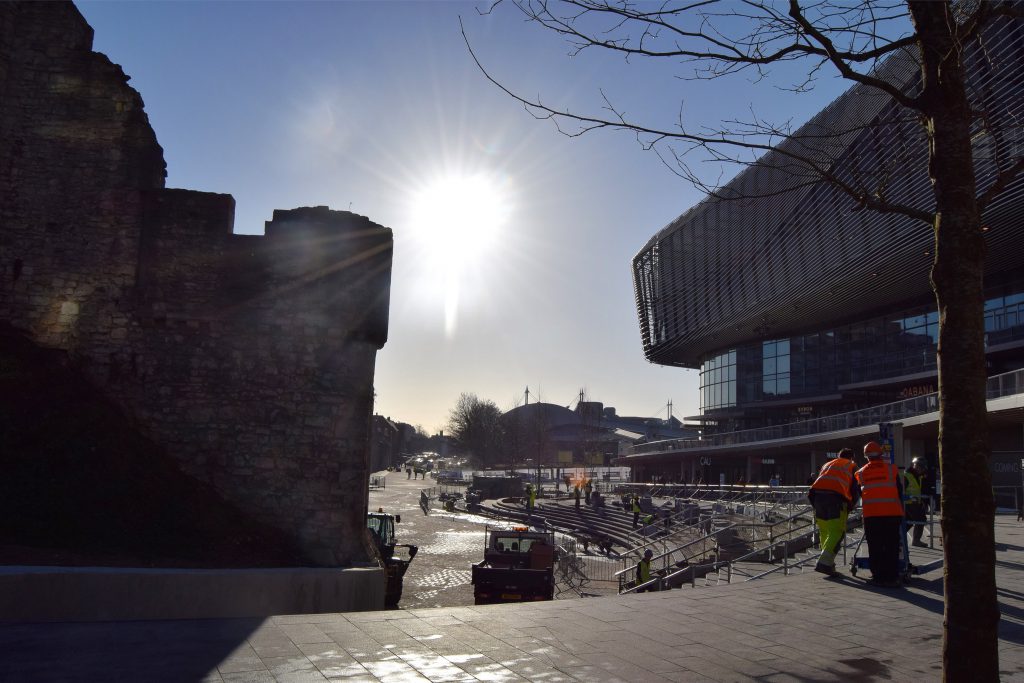 From below Arundel Tower we looked up the top set of steps towards West Quay Road. From here we could see the bridge we’d crossed and the top of The Bargate. This was once a cliff and, when the walls and towers were built, stones and sand from the shore were piled against them to stop the tide eroding the stone away. Now there is a grassy bank, looking a little the worse for wear after all the building work. 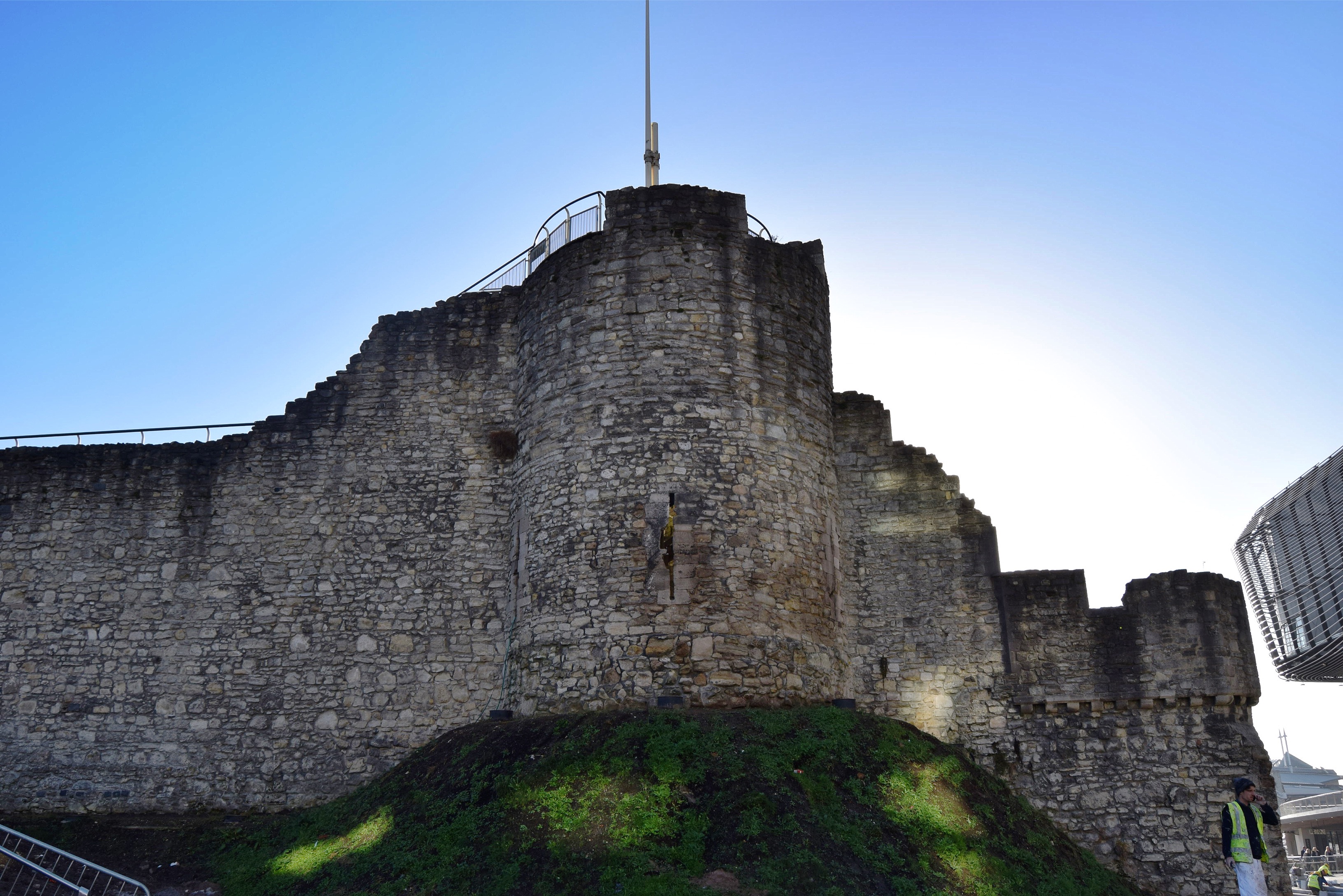 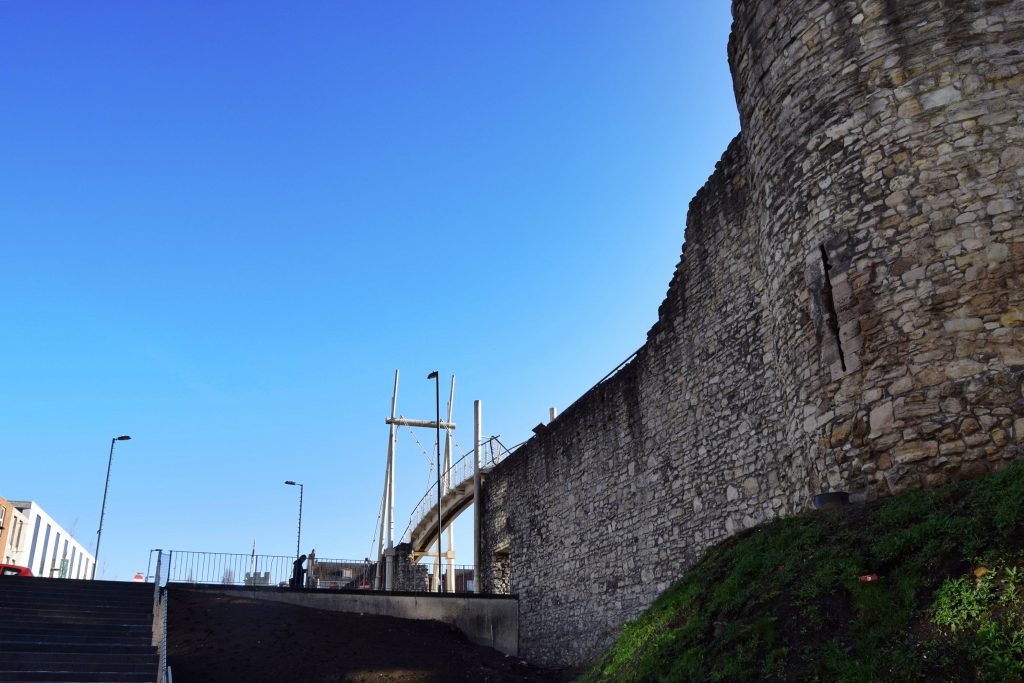 We strolled along the promenade looking at all the new restaurants and the little areas of planting that haven’t reached their full potential yet. It will be interesting to watch as things spread and grow and to see the area as the seasons change, especially when the water feature is finished. 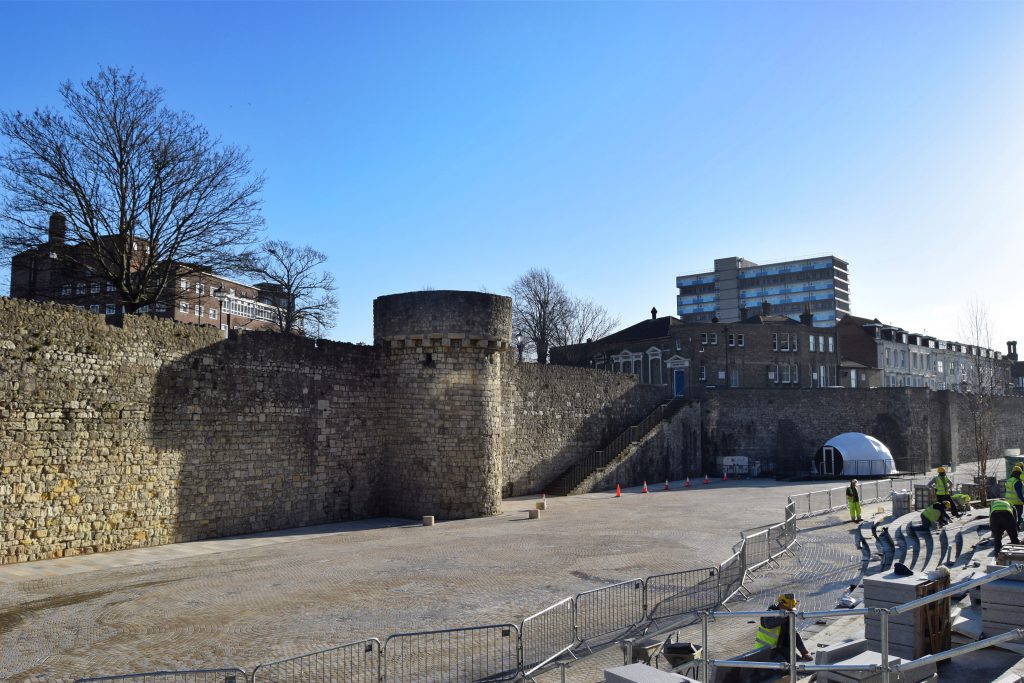 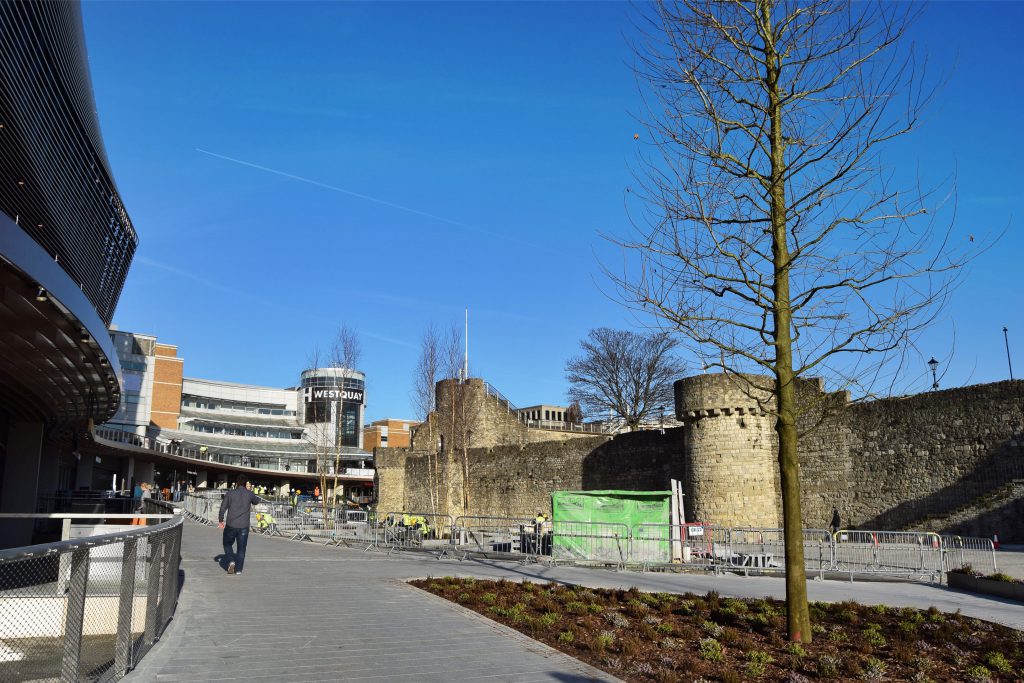 In the gap between the old WestQuay and the new, we discovered some wonderful new artwork painted on the walls of the old WestQuay building. This, it turned out, was the Walkway Arts Project and the four paintings were selected by the developers, Hammerson, from entries into an open submission competition. These are works I am sure I will revisit many times but, right then, our main priority was finding somewhere interesting to have coffee. 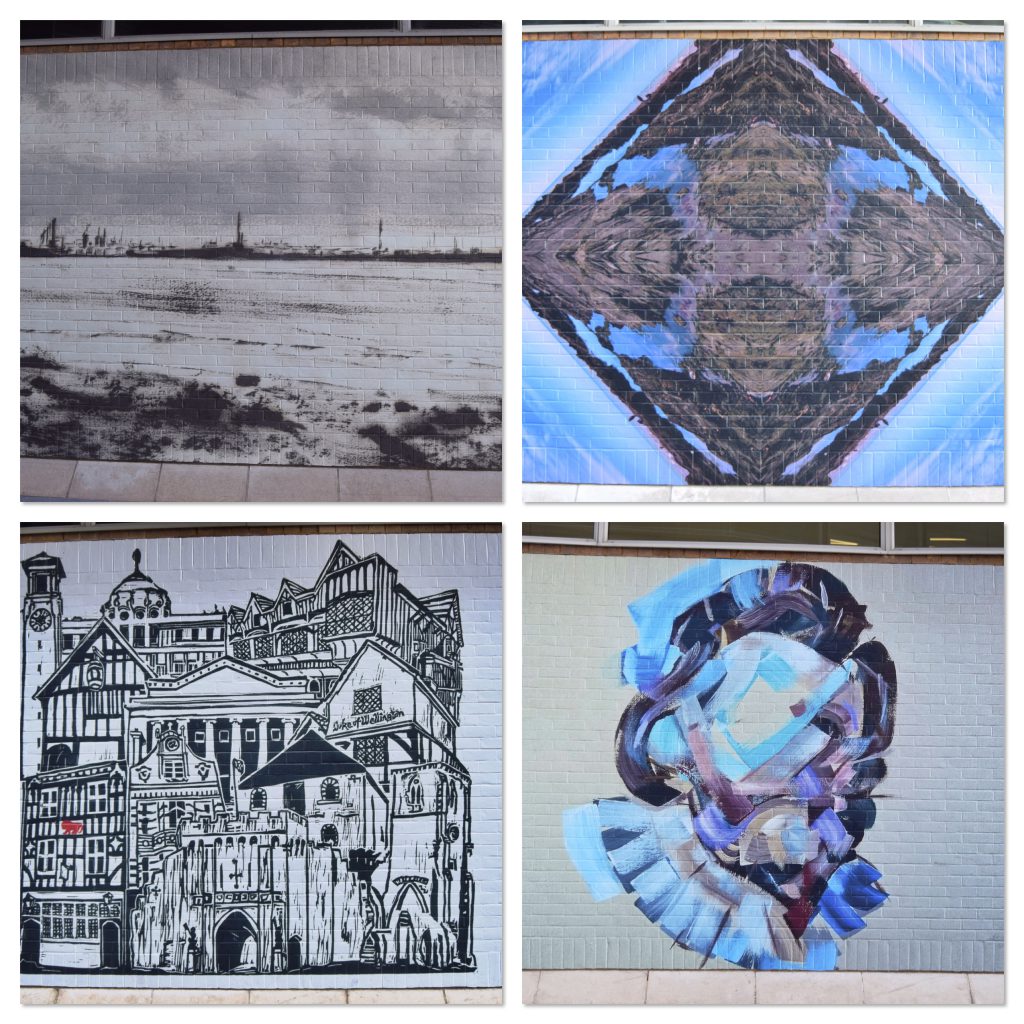 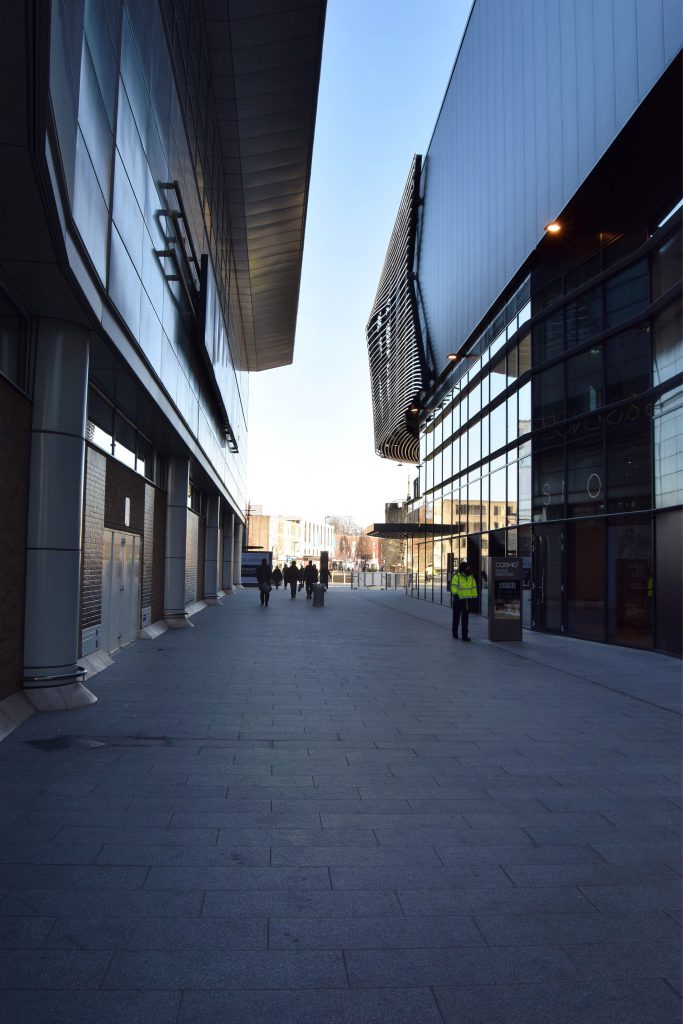 Inside the building there was almost too much choice. We walked around, half trying to decide where we would have our coffee and half marvelling at the waves of chains decorating the ceiling and the futuristic wooden column with globes of spiny lights like sea urchins, 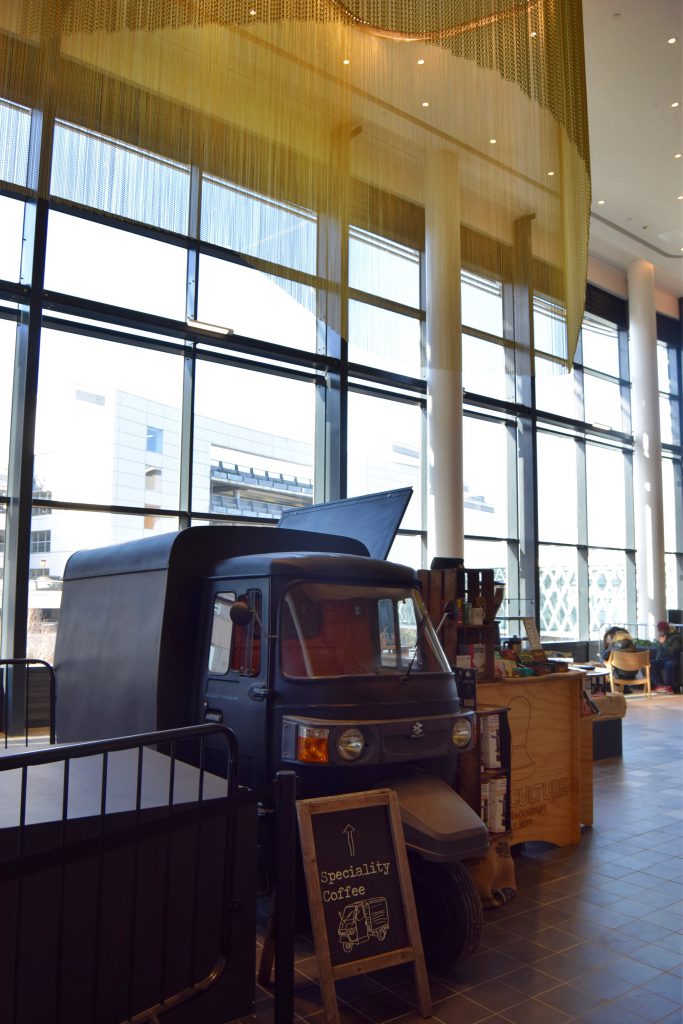 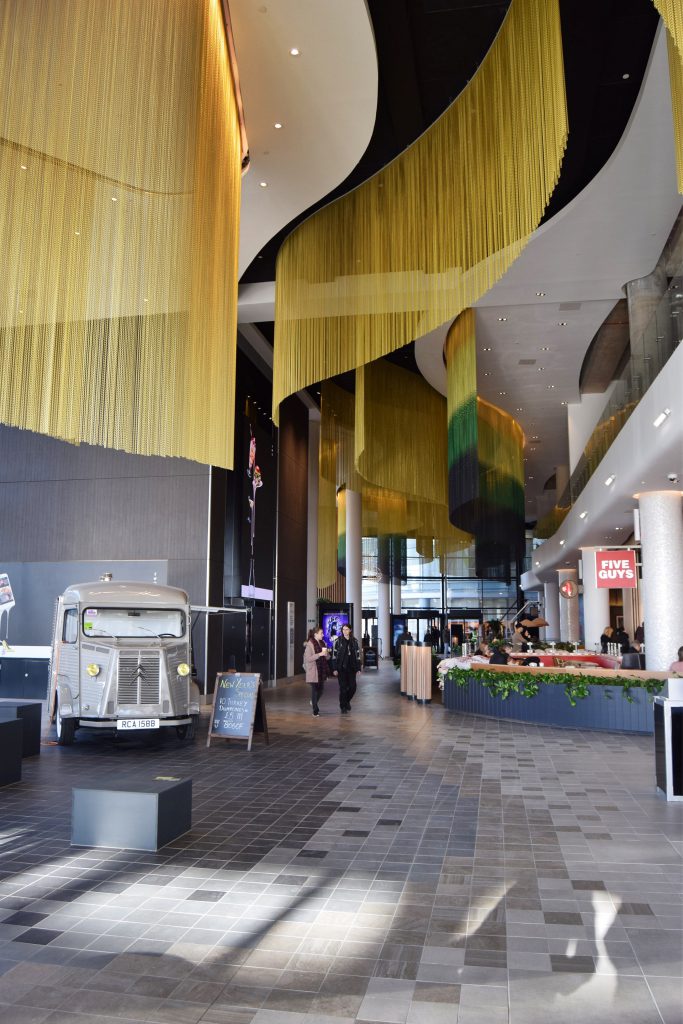 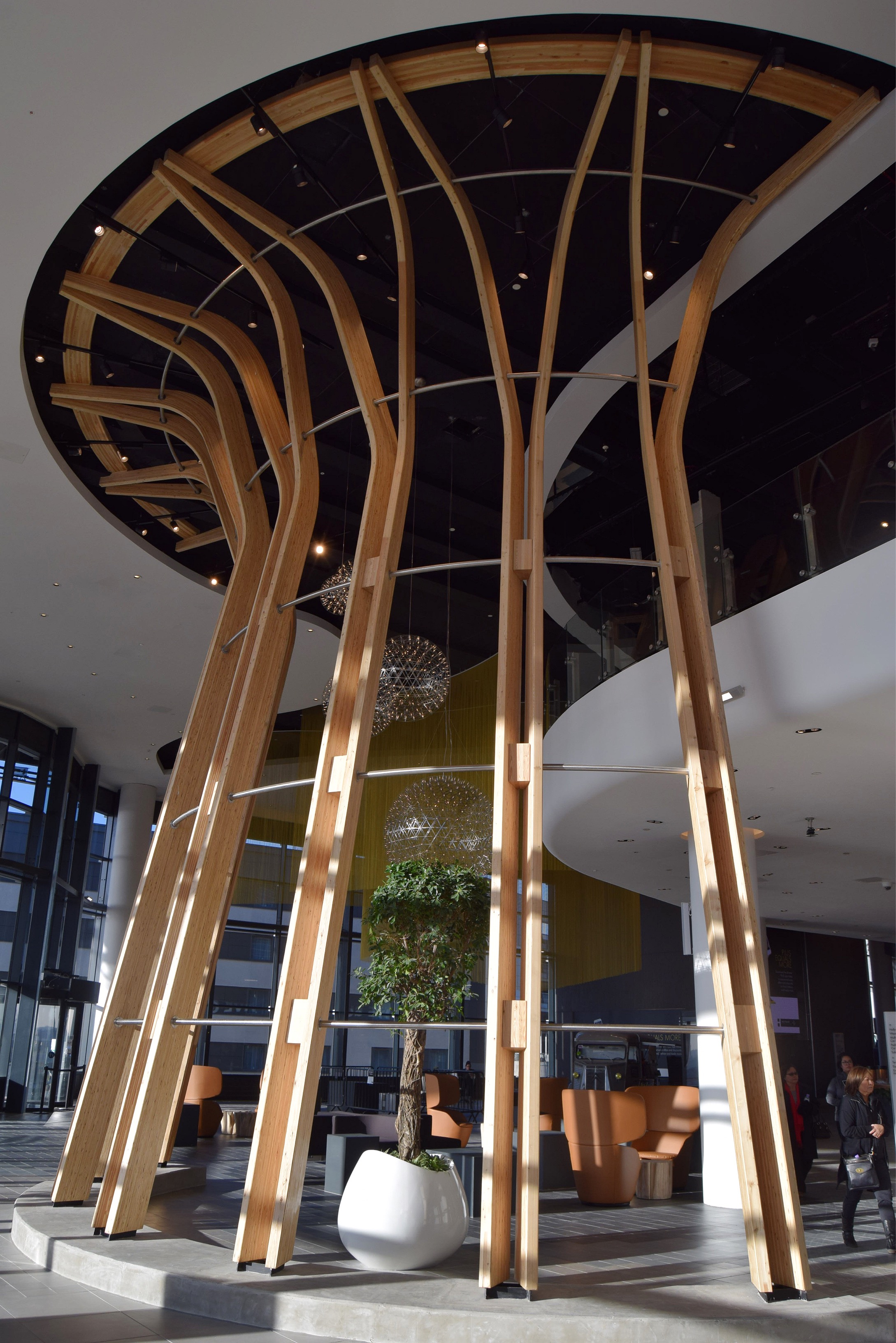 In the end, we settled on the quirky little coffee van, Tramp Culture. The coffee was good, if a little more expensive than our normal Costa treat, and the wooden tables, that looked as if they were made from driftwood, certainly made me smile. This is almost certainly not our last visit to Watermark. There are so many interesting restaurants to try. Maybe next time the water feature will be up and running too. 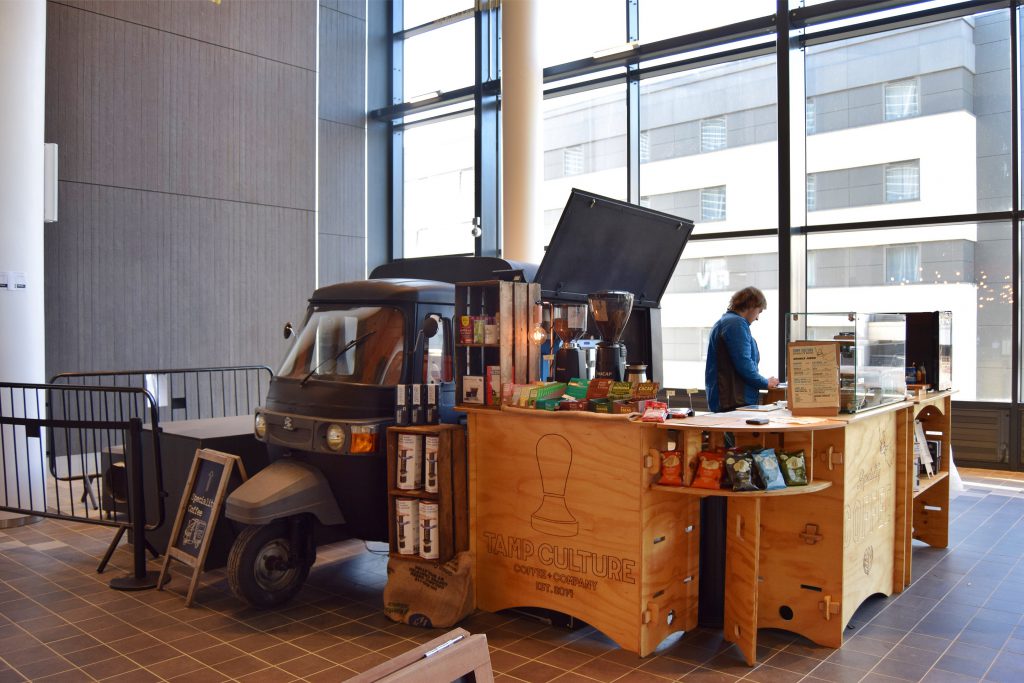 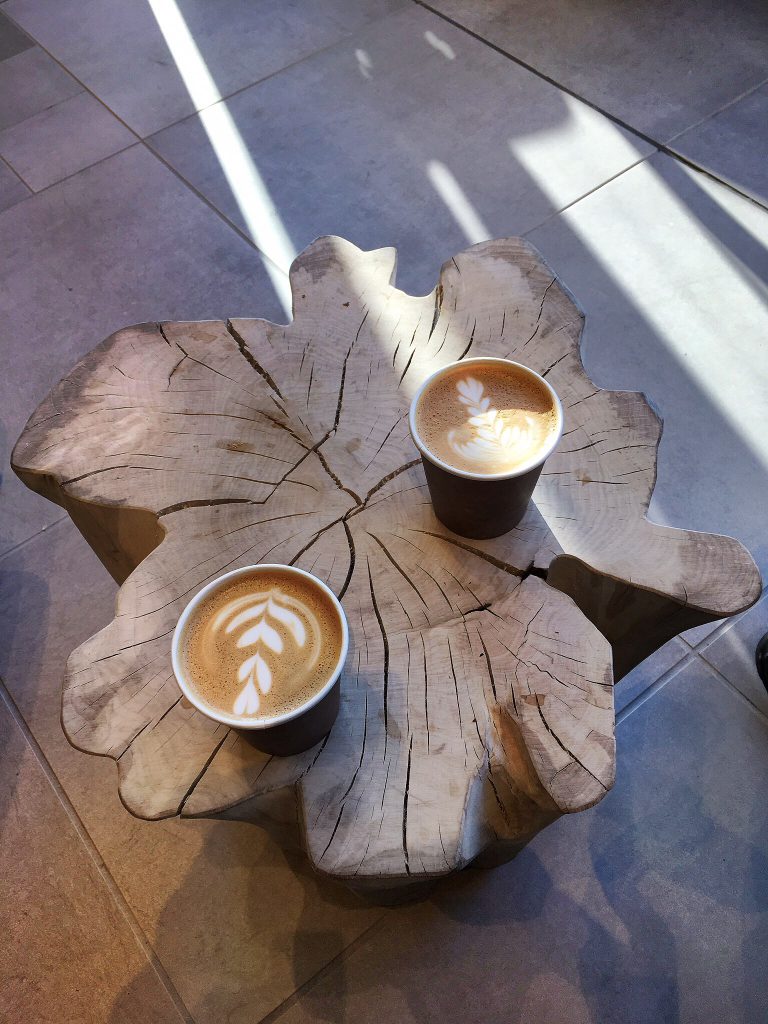 20 thoughts on “Old walls and Watermark”