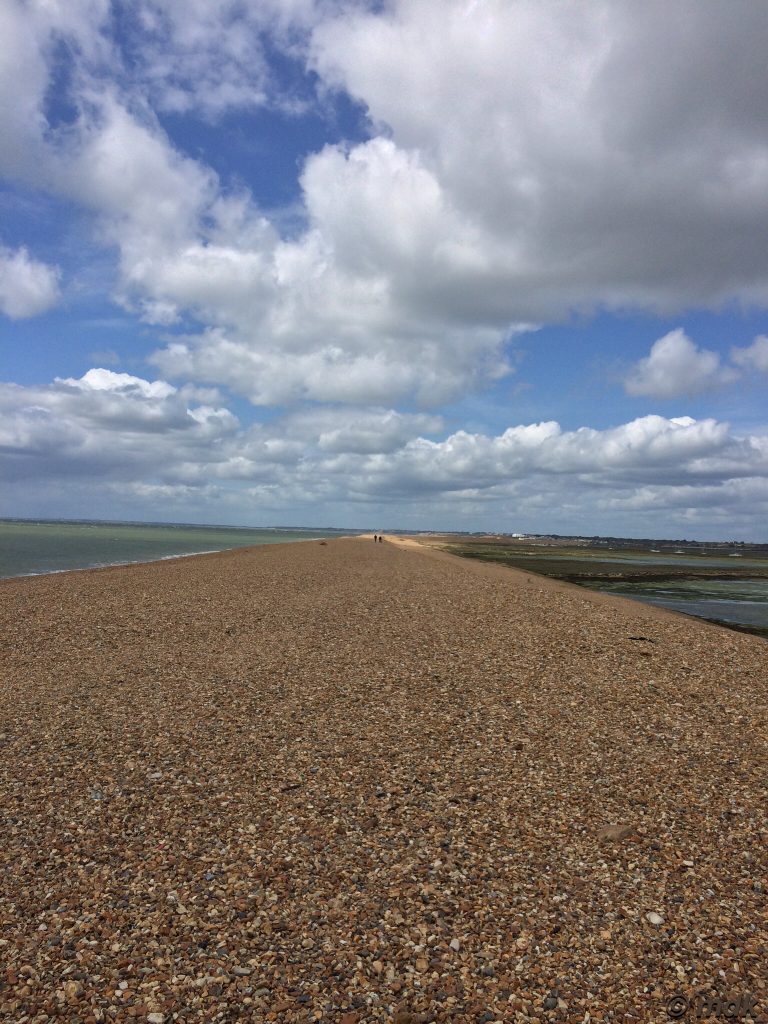 My May 2014 Milton on Sea Adventure wasn’t quite over. There was still the getting back to the other end of the spit to get through. As soon as I left the shelter of the castle I knew it was going to be an ordeal. The shingle stretched ahead of me seeming twice as long as it had on the walk out. The wind was so strong in my face every single step was an effort with very little reward in terms of distance covered. As I struggled forward Commando, waiting back at the car park for me, was on my mind.

In no time at all any little bit of energy I’d clawed back on my grassy walk round the castle away from the howling wind was gone. I peered down at the path Commando had taken and wondered if it was easier down there? I’d made my choice though and I didn’t fancy trying to slide down the steep bank. On I battled, my breath taken away, my limbs like lead. Time passed and I didn’t seem to be making any progress at all. 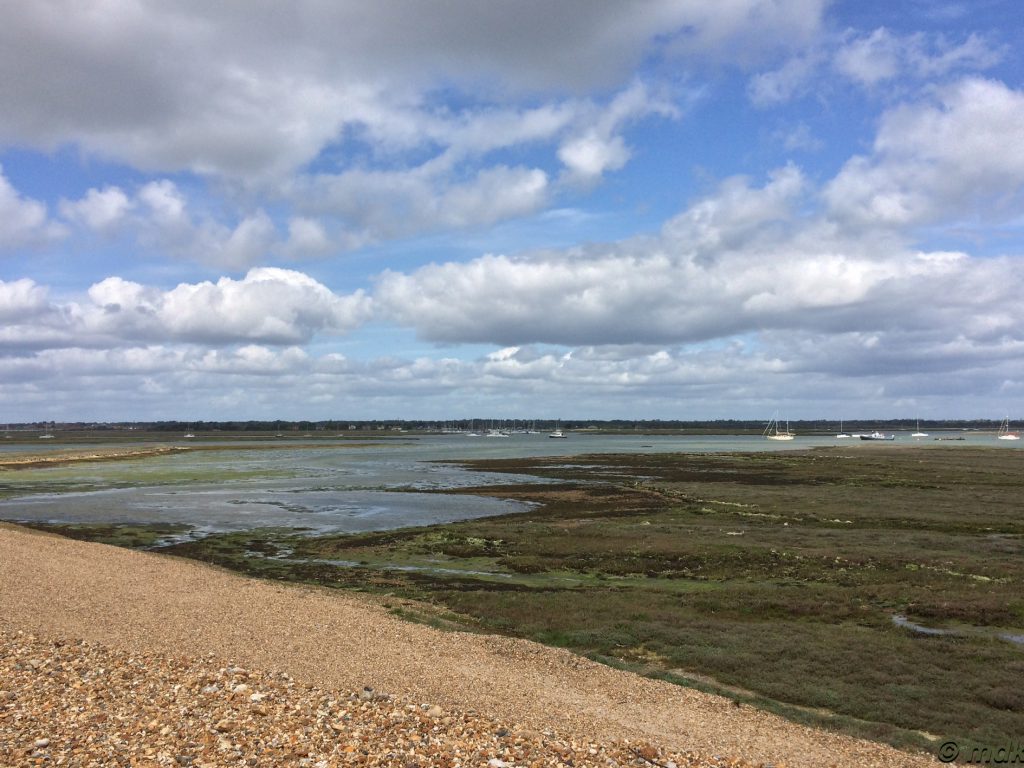 There were moments when I honestly thought I was going backwards. Once or twice I stopped to take a breather and a quick shot of the estuary beside me filled with little boats. They were the only measure of my forward movement because the long strip of shingle looked as long as ever, a never ending trial. I felt a little like Sysiphus pushing his boulder forever up a hill. 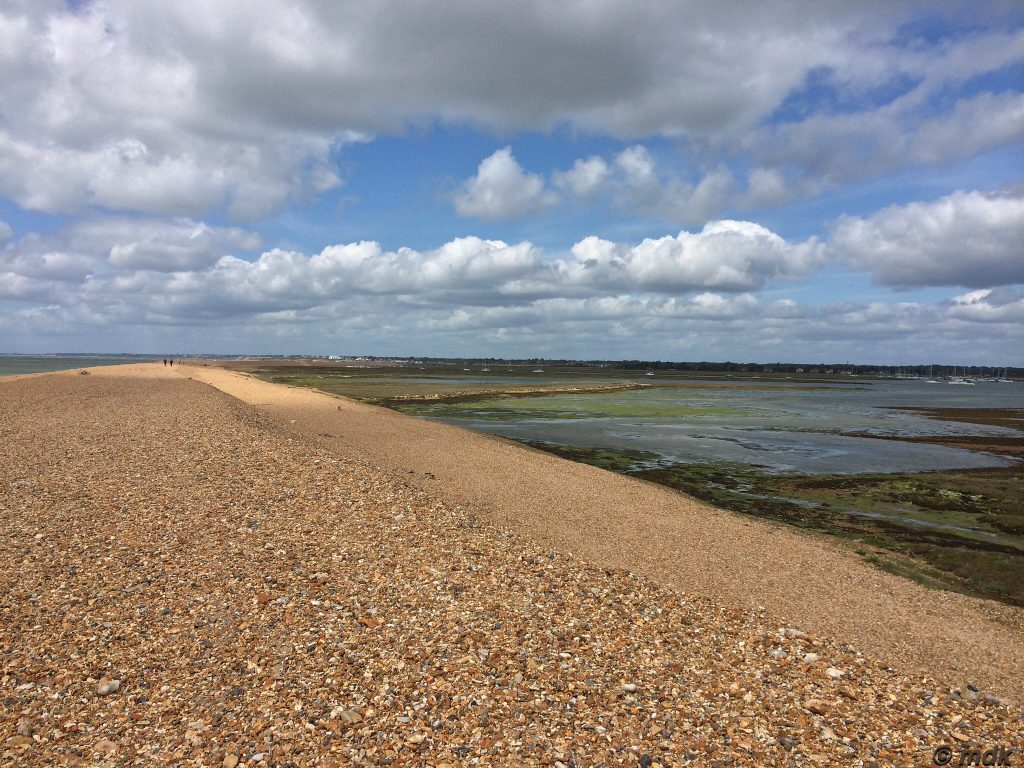 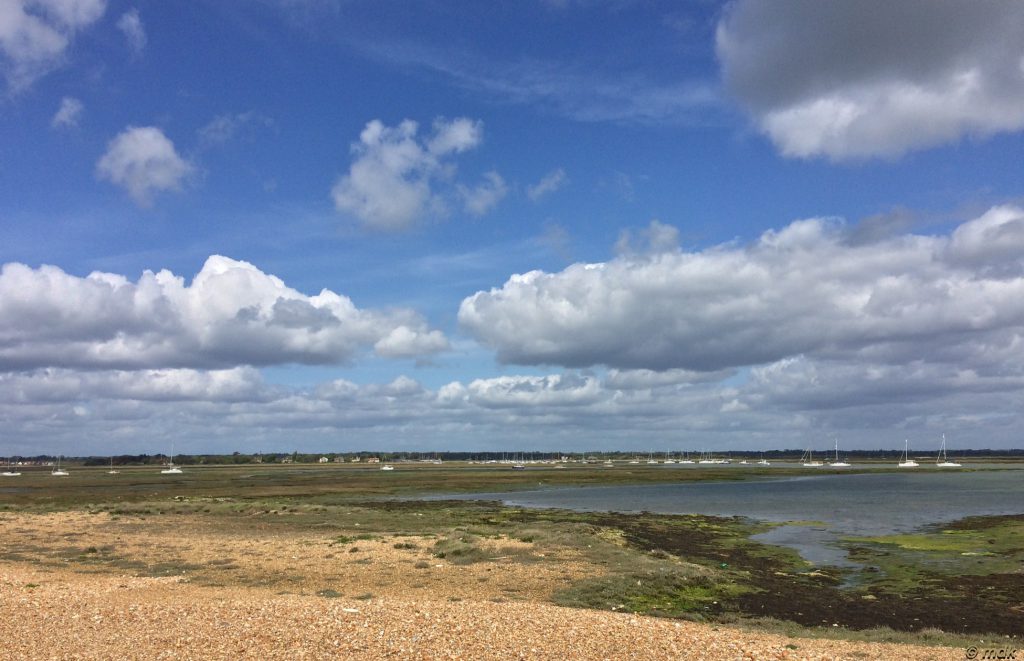 The tiredness was really beginning to get to me and even thoughts of the calories I must be burning couldn’t cheer me. The wind was making it hard to breathe and my eyes and nose were streaming from it. There was a point when I thought I’d never make it and I wondered what would happen if I collapsed or my heart gave out with the effort. How would anyone get to me? Would the costal rescue helicopters be able to pluck me off this blasted shingle spit or would I just be left there to mummify? Dark thoughts and quite silly now but, at the time, I really did feel quite desperate. Then I saw a minuscule speck in the distance coming towards me. It seemed to be wearing a black and fluorescent yellow jacket. Could it be Commando coming to rescue me? 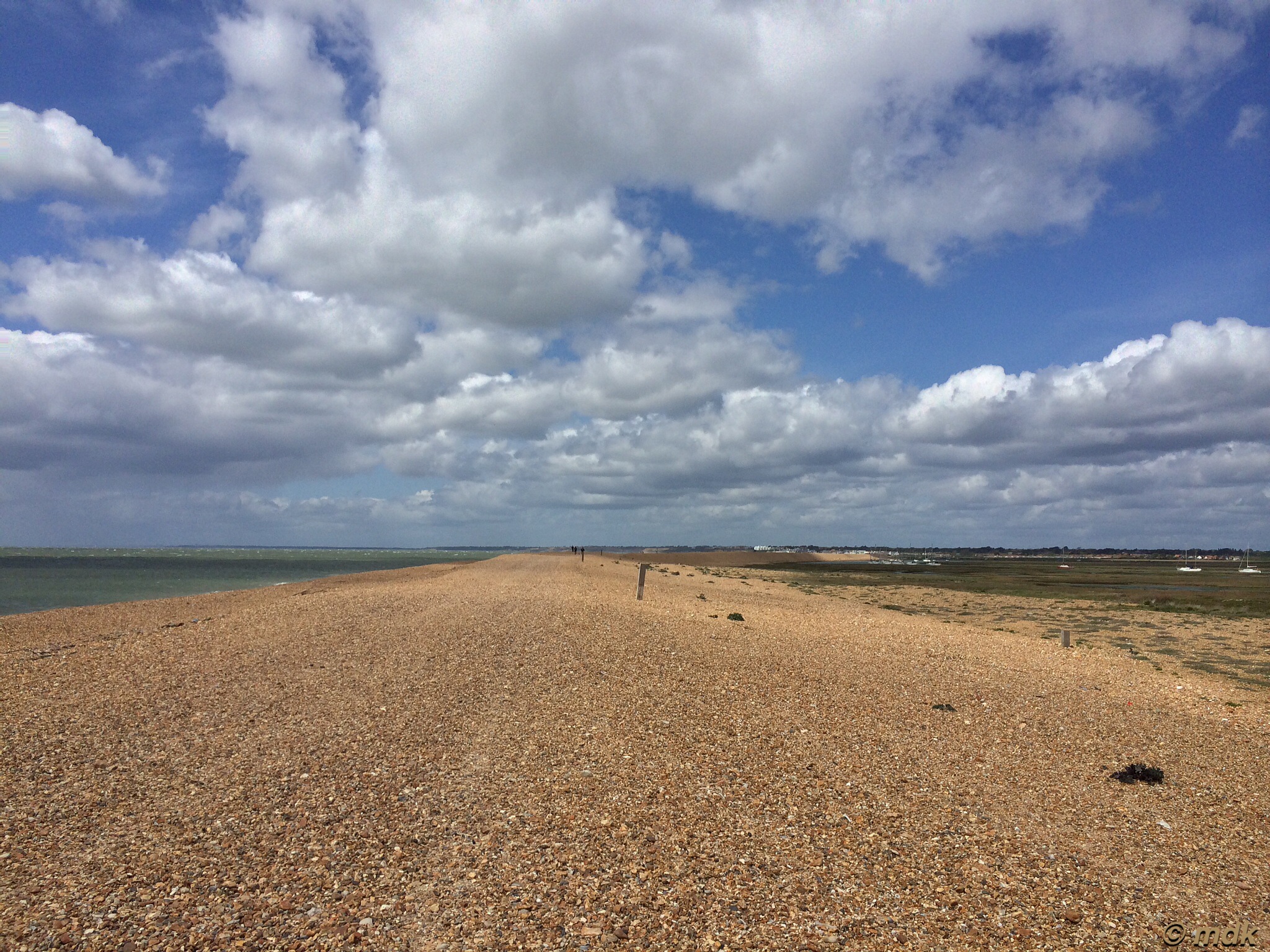 I kept struggling forward looking at the shingle and trying to find the firmest bits while peering at the distant figure slowly getting bigger. Was it a mirage? Was I hallucinating? Slowly but surely I became more and more sure it really was Commando and for a few moments I felt relieved until I realised I’d still have to walk back even if he was with me. When he finally reached me he kissed me.
“You didn’t seem to be making any progress at all,” he said, “I could see you were walking but I couldn’t see that you were moving forward.”

For a little while we lapsed into silence, both struggling against the wind. Then Commando stopped.
“It’s a little less windy down there’” he said pointing to the path at the bottom of the shingle bank.
That didn’t seem a particularly helpful thing to say seeing as we weren’t down there. Then he said, “come on, let’s go down the bank.”
“Can we get down?” I wondered but he was already taking my hand and, in seconds, we were slip sliding through the shingle to the bottom. Somehow I managed to stay on my feet although my shoes were full of stones and I had to stop at the bottom to empty them.

He was right, it was less windy down there and the shingle felt slightly firmer. Now we could talk without our words being blown away and I didn’t actually feel as if I was going to expire at any moment.
“I think the tide is further out than it was when I came along earlier,” Commando said.
“When I saw you I couldn’t see how you were going to get through, there hardly seemed to be a path.”
“It was mostly improvisation,” he agreed.
I told him a little about the castle and the lighthouse and soon we were coming to the bridge I’d seen from above, the one closest to the castle. It’s called Cut Bridge but that’s about all I know about it. 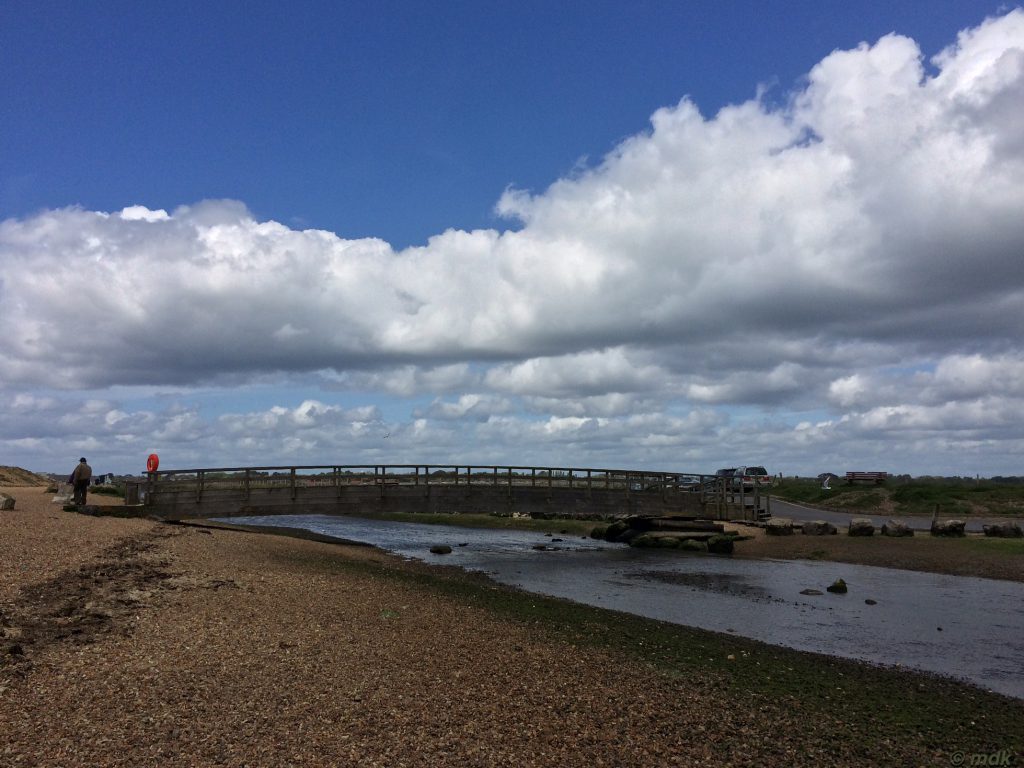 Commando had got a little ahead of me when I stopped to take a photo so I scurried, as much as anyone can on shingle, to catch up with him. The end of the path was in sight and I was surprised at how much faster we were moving down at the bottom of the bank. If I’d stayed at the top I’d probably still be there now.
“Do you think it’s a canal or a river?” I wondered when I caught him up
“It looks quite straight,” Commando agreed, so it could be a canal. 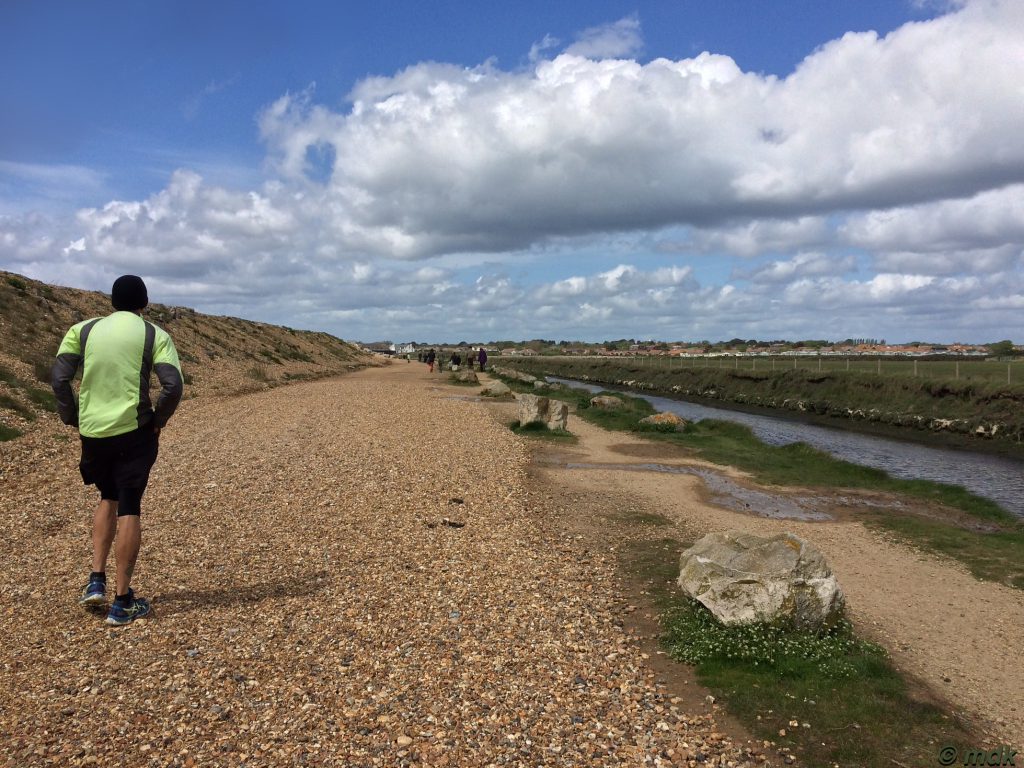 A few spots of rain began to fall about then and I realised how lucky I was to be at the bottom of the spit and not up on top. Then I saw the swans and of course I had to stop again for more photos. Swans have always been quite symbolic in my life. I met Commando at a pub called the White Swan and they always seem to pop up in one guise or another. Before too much longer the rain had stopped and we were at the other bridge, Sturt Bridge, and beyond it was Sturt pond. It seemed to be filled with swans much to my delight. 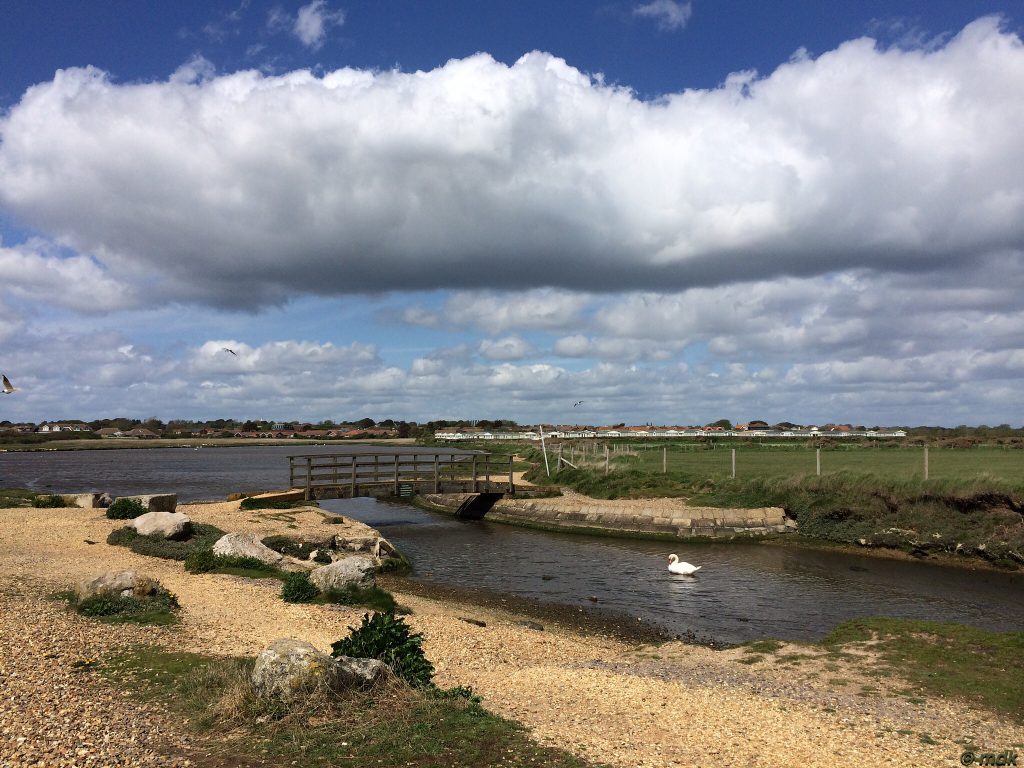 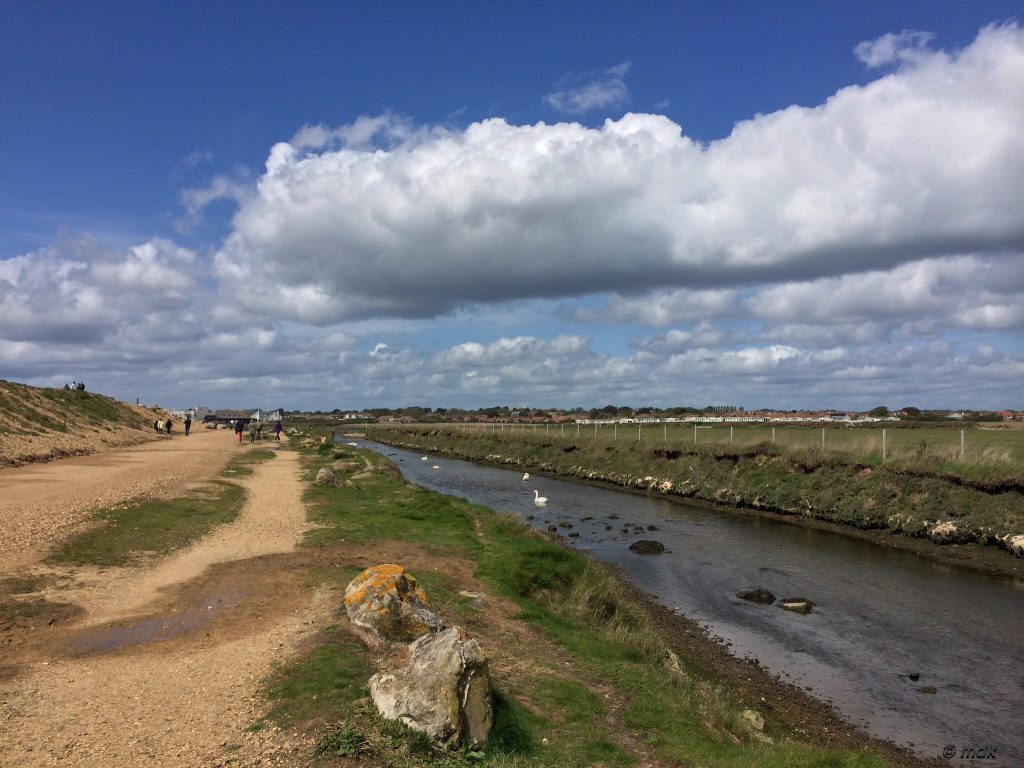 When we finally made it back to the cafe Commando said, “do you recognise this place?”
“I do,” I admitted, “but I can’t think why because I’ve never been here before.”
“It was on the news back in February when we had those storms,” he said and all at once I knew why it was so familiar. When the storms of February 14th hit, the cafe was full of people. The wind took stones from the spit and flung them at the cafe, smashing all the windows. It was so bad the army had to be called to rescue the diners. We’d watched reports on the local news and seen the story in the Echo. 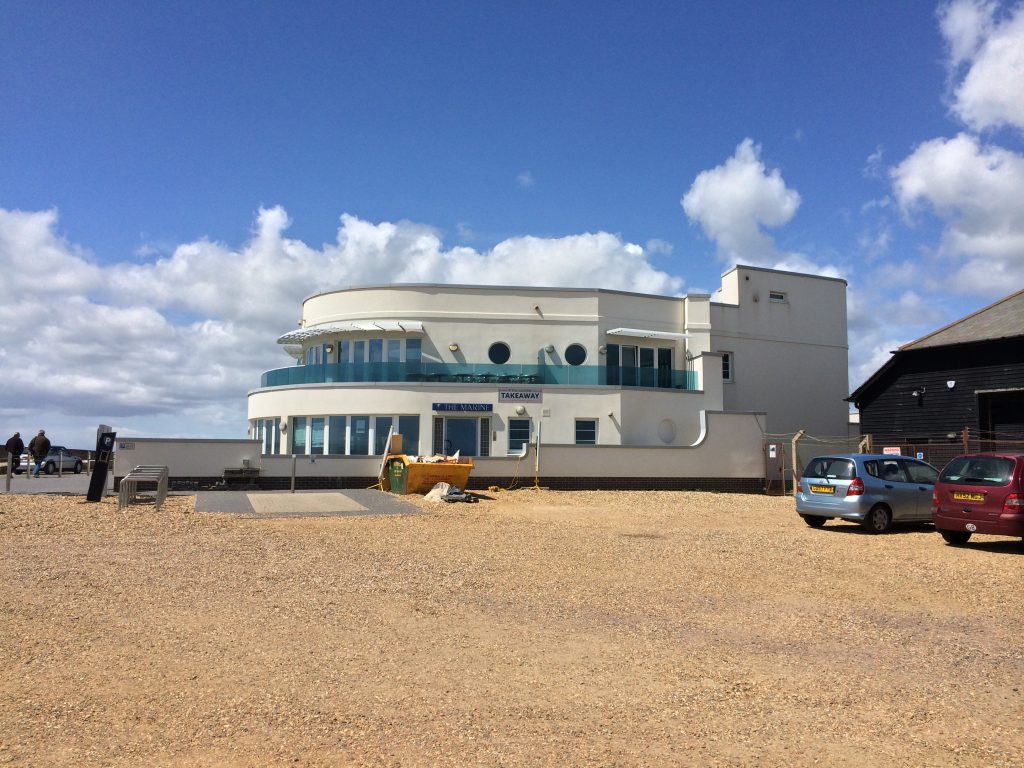 Of course, back at home I had to Google it and I found a very interesting website about the terrible damage the storms caused and the efforts to repair it. The storm on Valentines day 2014 was so bad that waves crashed over the top of the spit, washing away huge numbers of stones including those that smashed the cafe windows. It was left badly damaged. The storm also caused landslides further up the coast, the reason for the damaged footpath I’d seen. Some of the beach huts were smashed to matchwood. This could explain the gaps between the huts.

The top of the spit is actually all new gravel, dredged from a gravel pit. The website shows the work being carried out and I think I may have inadvertently snapped a couple of photos of one of the diggers when I was at the castle. Maybe that’s why the shingle is so loosely packed, it hasn’t had much time to settle after all. Even so, I wonder why they didn’t make a firmer path while they were at it? 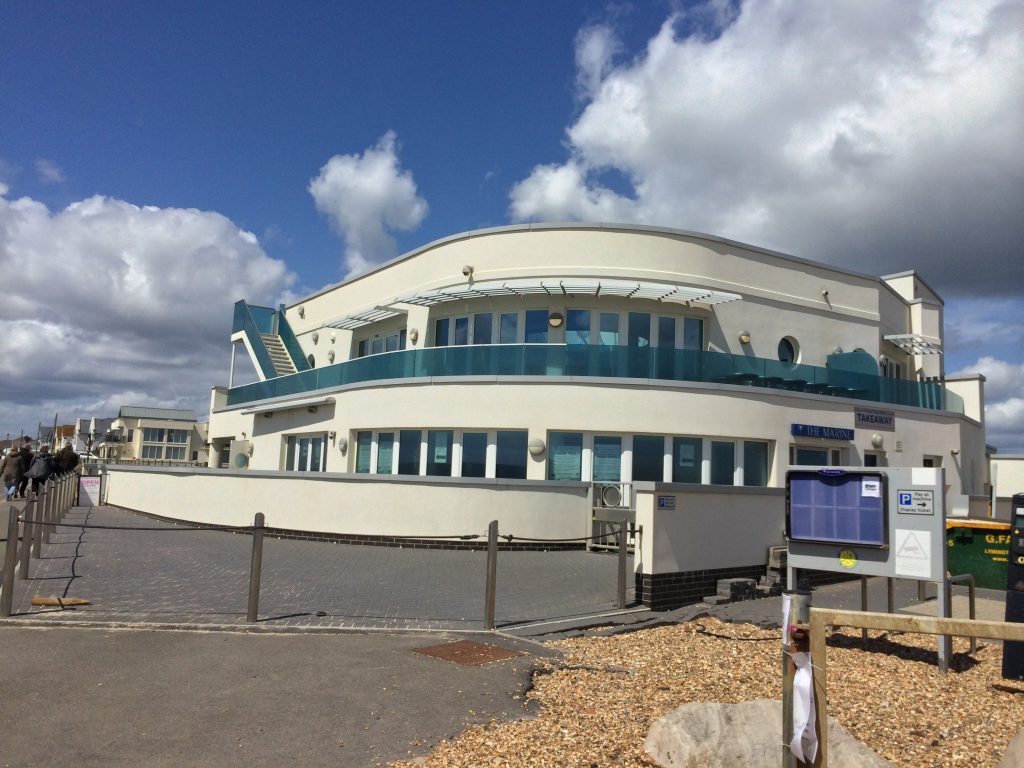 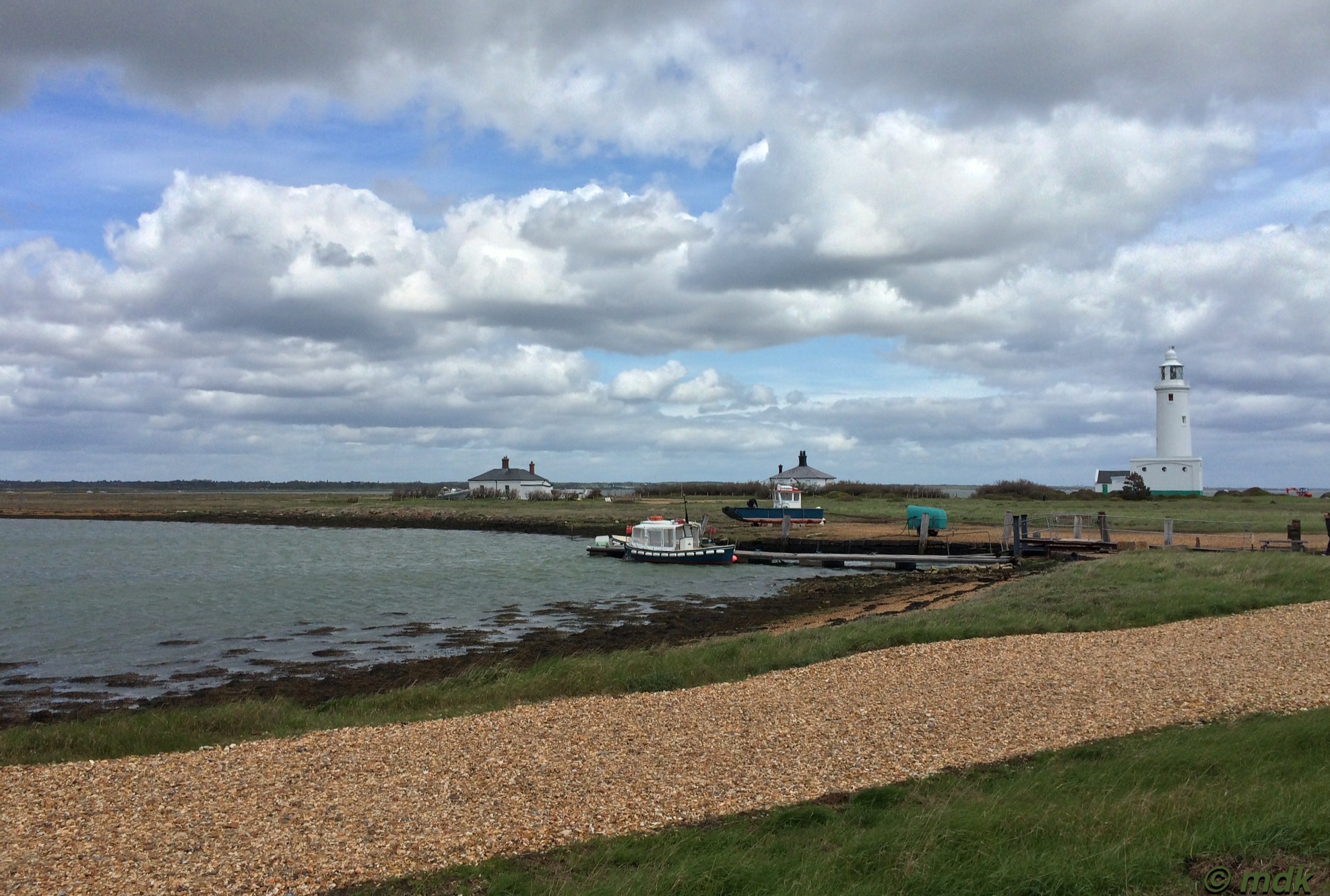 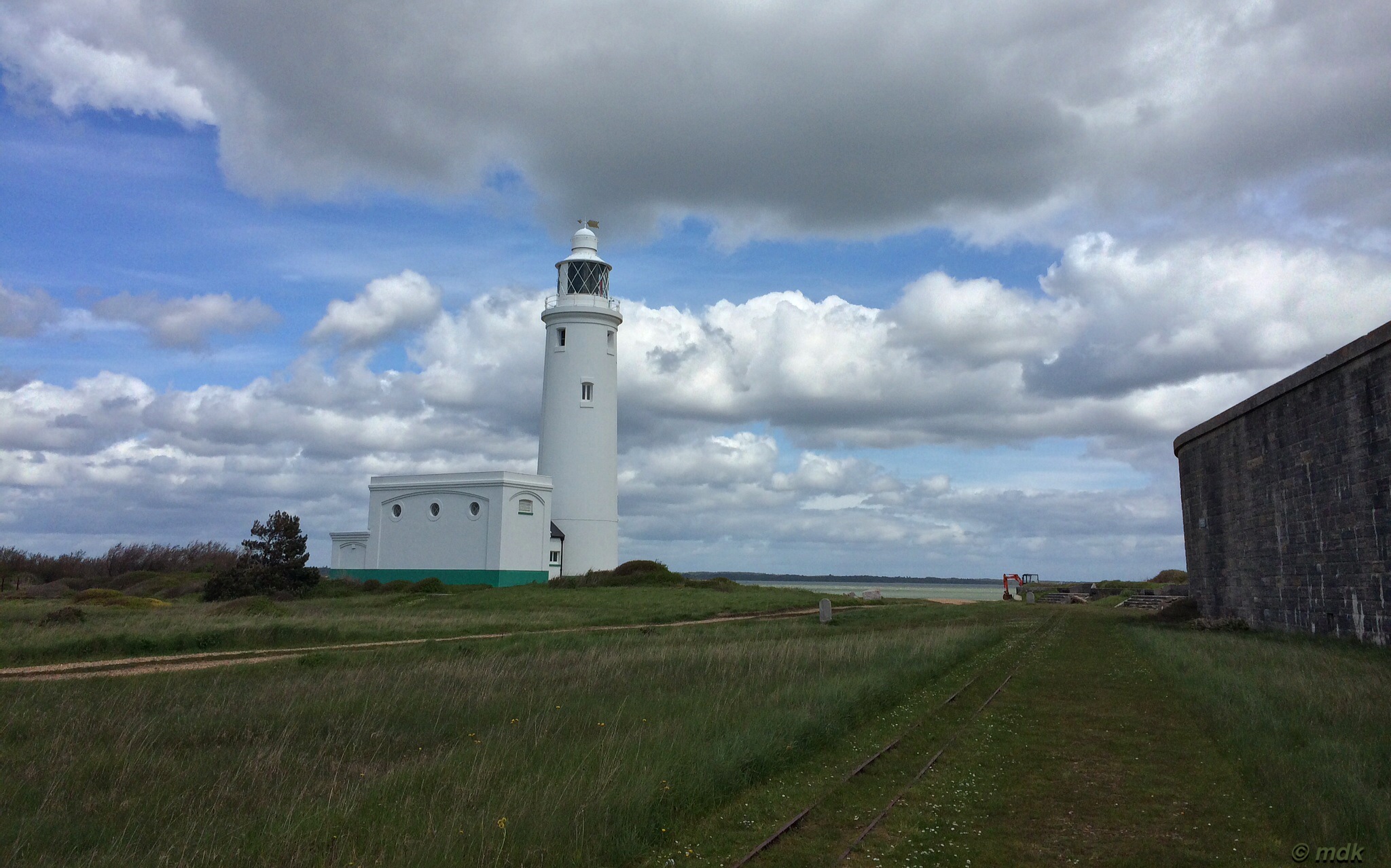 The spit is around two miles long, curved round by the way the sea deposited the original stones. Including the walk from the car park I walked almost five miles, four of them on the shingle, battling against the wind one way or another. While we were walking back Commando had wondered if the Spit had been rebuilt because he thought it was far higher than he remembered. He was right. I’m pretty sure I won’t be walking along it again in a hurry. 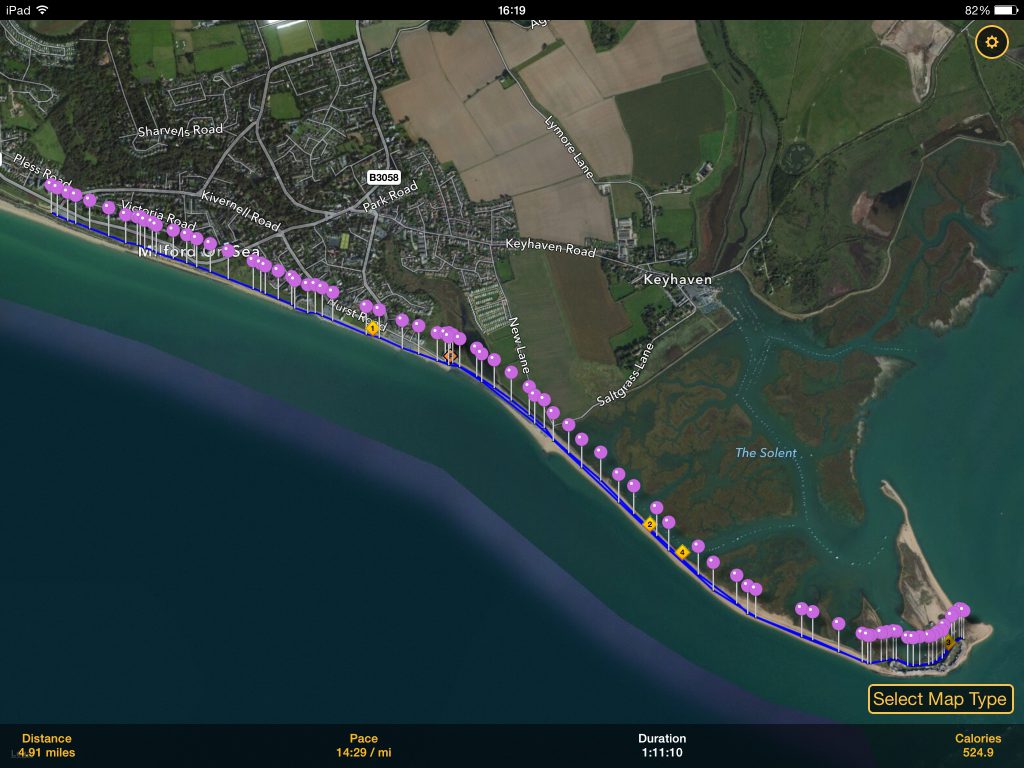