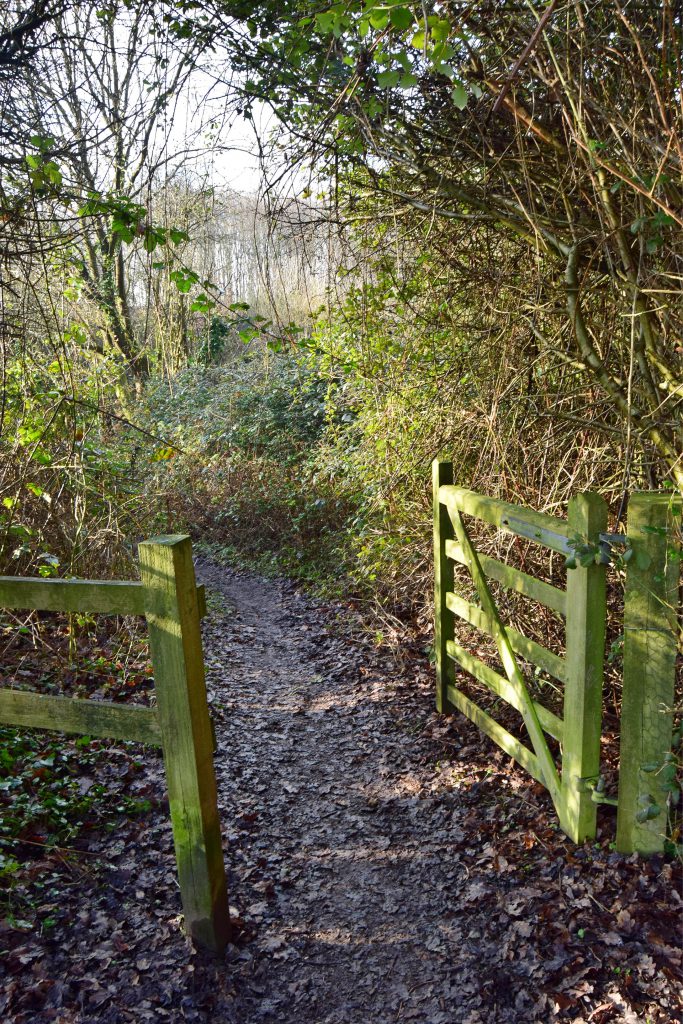 There was a great deal of dithering about which route to take home from the Quobb Lane Cemetery. With the decidedly changeable weather, neither of us fancied hunting for a probably non existent ack ack gun site, especially as it would mean heading back along Allington Lane with no footpaths. CJ didn’t fancy Church Hill, possibly because of the hill part of the equation. In the end we decided the path in front of us, running beside the cemetery, was probably the best choice. Where it would take us was anyone’s guess.

An unexplored path always feels like a treat, especially when it’s close to home, and we walked through the gate with a feeling of anticipation. The trail we found was firm with a thin mulch of decaying leaves. Thankfully, it wasn’t frozen either. We strolled along, past scrub and saplings, the gentle hum of the motorway slowly receding as we went. Soon we came to a small wooden bridge over a narrow rill. 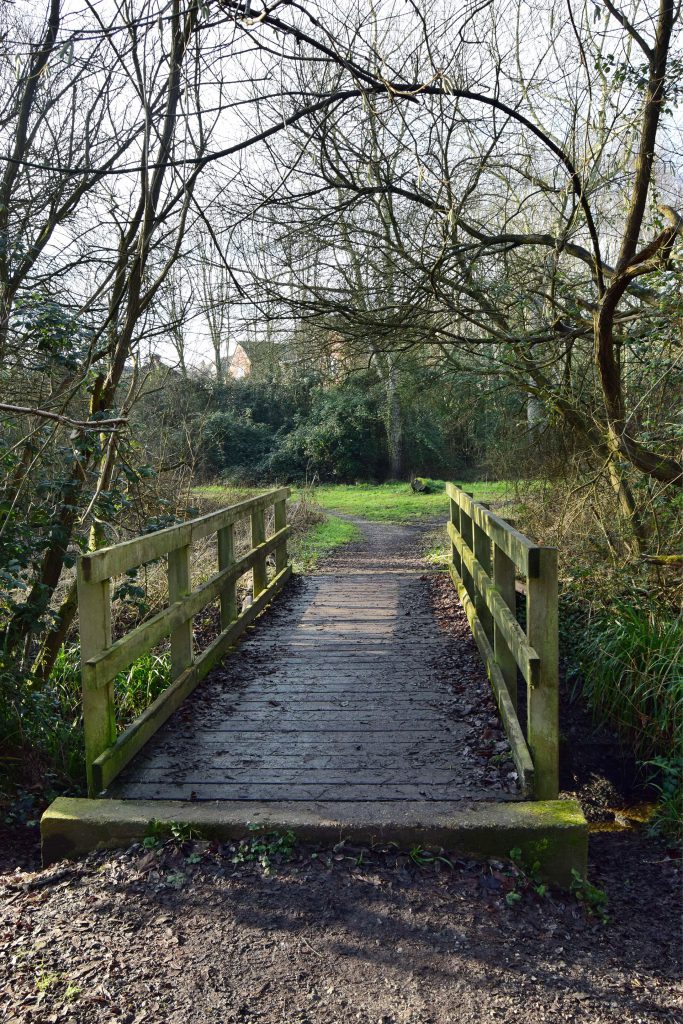 “I think this is probably the same little stream that runs through Hatch Grange,” I said.
“What’s it called?” CJ asked.
“I have no idea. It isn’t marked on the maps, at least not with a name. I think it’s just a tiny tributary of the Itchen.”
It really was tiny, in summer it’s probably dry, but CJ seemed disappointed I couldn’t give him a name. 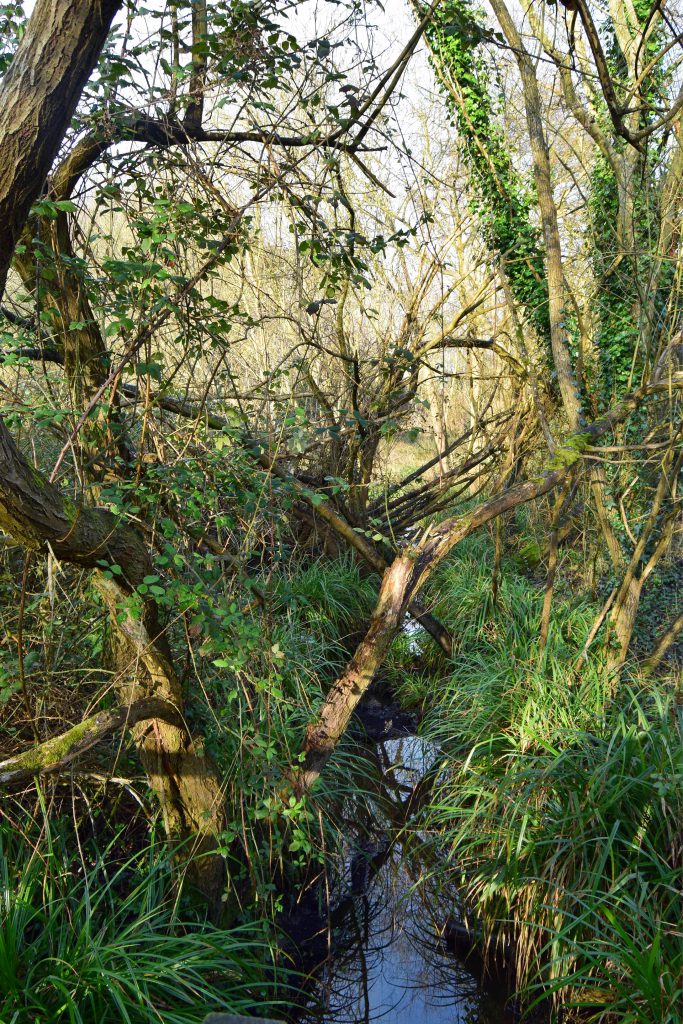 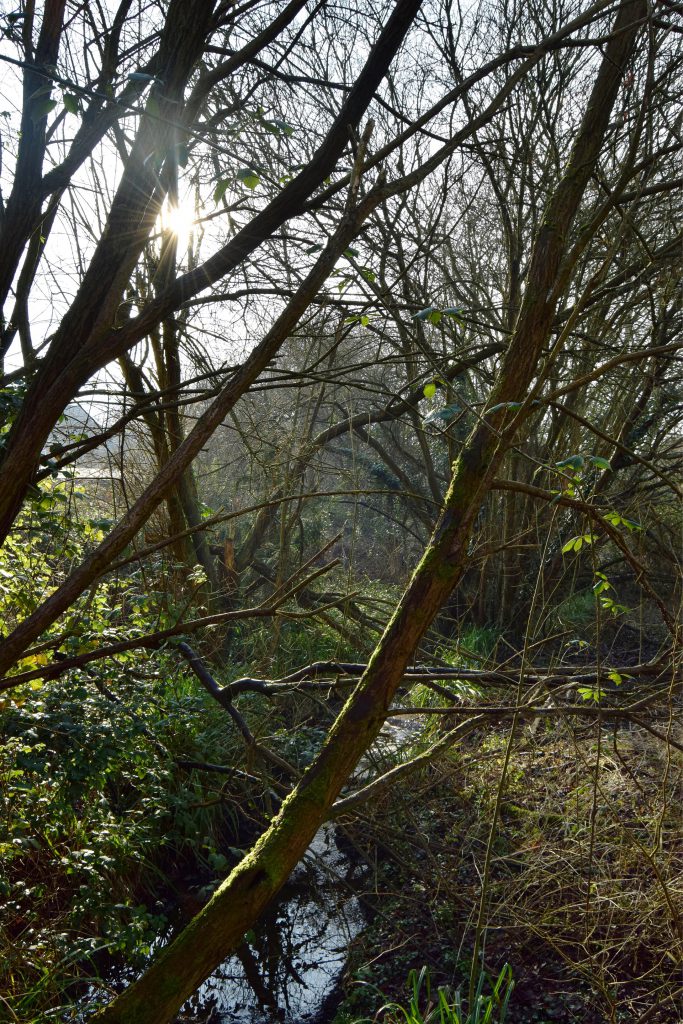 The ground was a little muddier on the other side of the bridge and the path divided. Through the leafless trees we could see the backs of houses to our left. We decided to follow the right hand path, fairly sure the left would lead us back to Barbe Baker Avenue onto one of the footpaths we’d passed on our way to the cemetery. 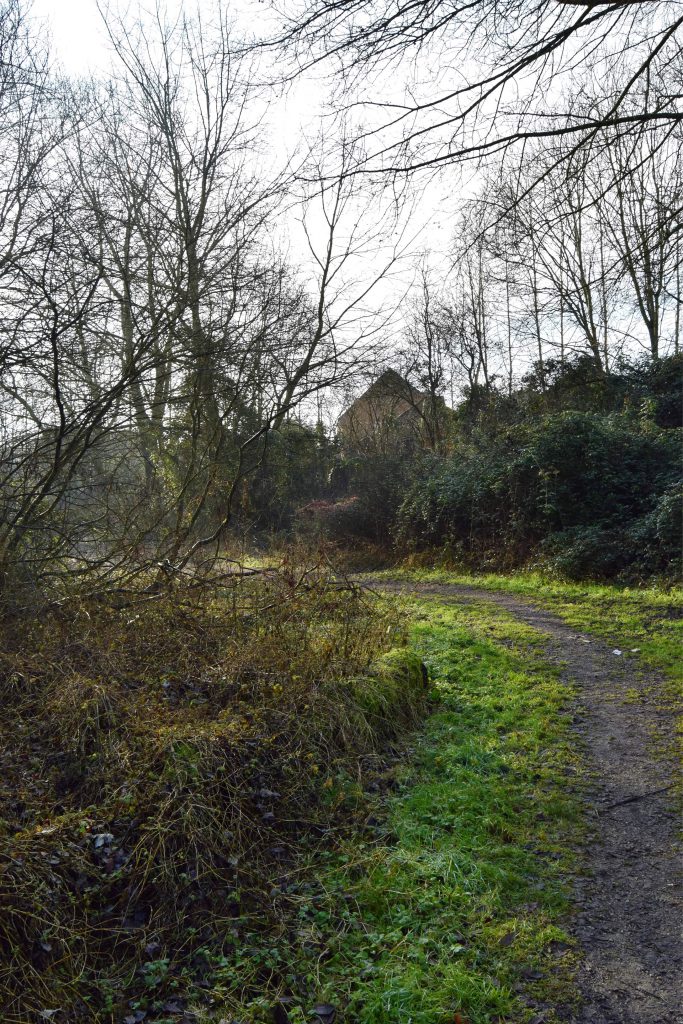 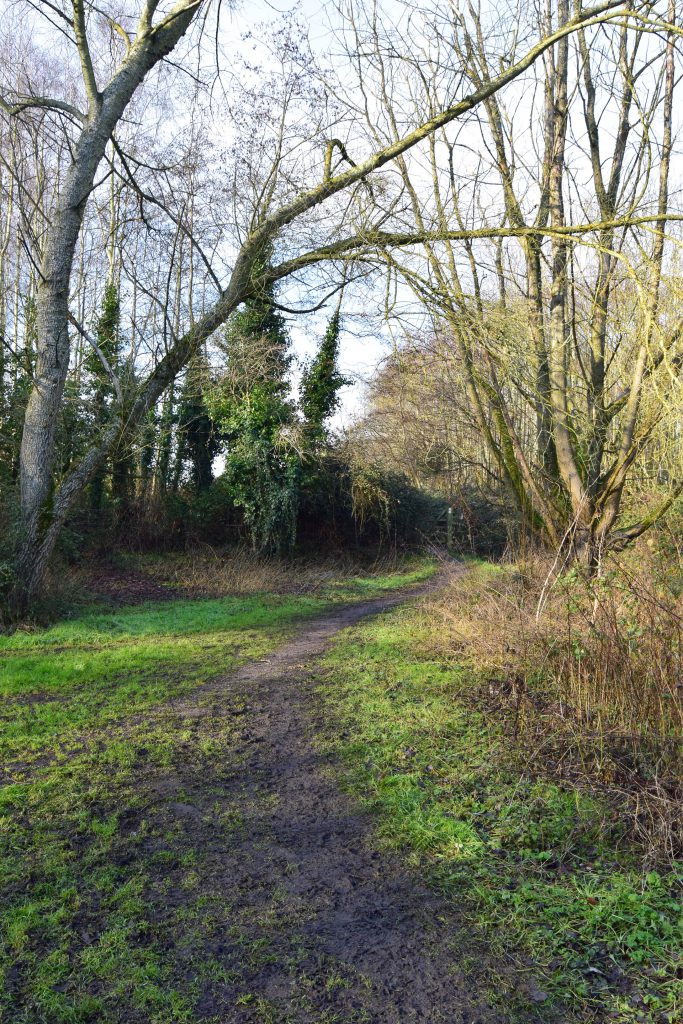 After a short while we came to another gate. Looking through it I had a good idea where we were. Once we’d passed through I was sure. We were on Hatch Farm, at the bottom of the hill I climbed in July with the words to The Sound of Music going round in my head. At least I was fairly sure we were, only now we were at the bottom of that hill on the far side of the meadow. 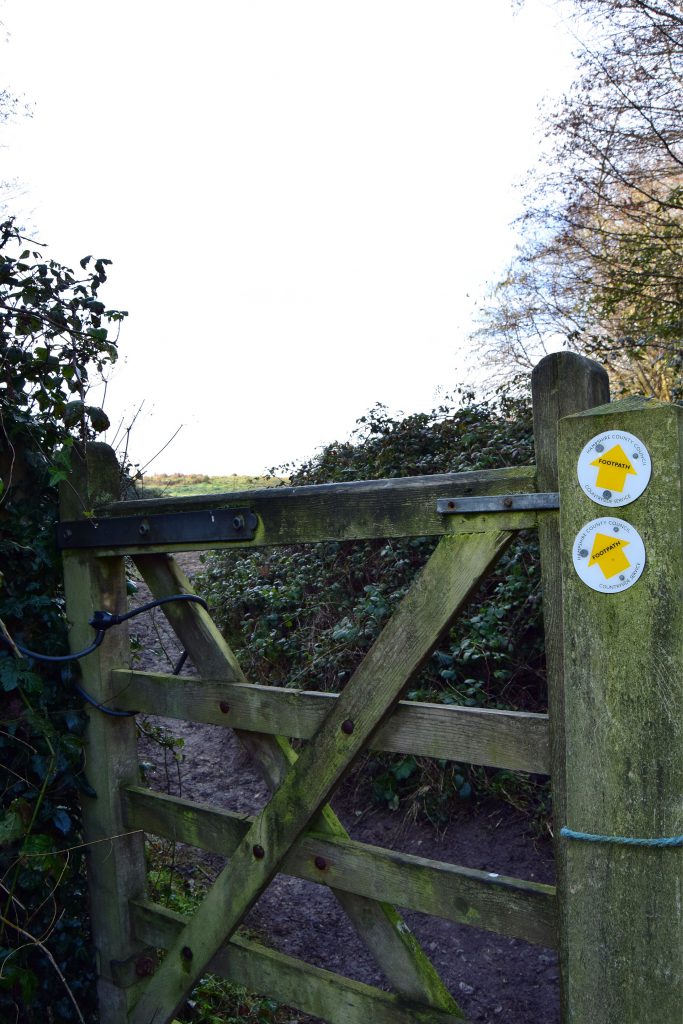 The trail through the grass was muddy but the mud was frozen solid, meaning we didn’t have to slip and slide our way across. There were mole hills everywhere. Of course, CJ had to go and investigate further, although I was certain he wouldn’t see any moles. 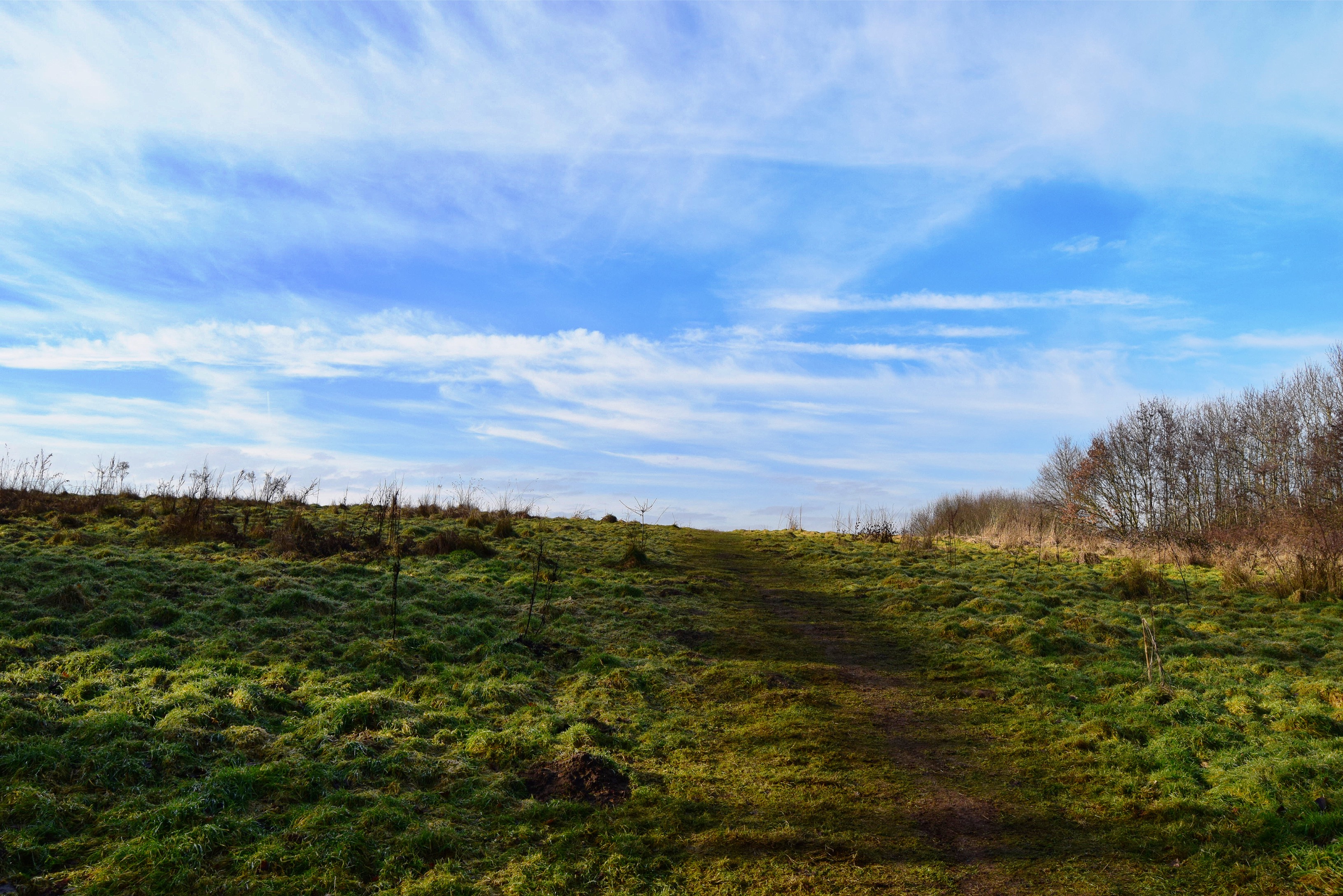 He tramped across the frozen grass and bent to inspect a hole he’d spotted.
“Mum, look a mole!” he said in a stage whisper.
Not believing him for a moment, I tiptoed across the grass and bent to look myself. At first I couldn’t see anything, but then I thought I could make out a tiny hand, or maybe it was a discarded plastic fork. Squinting a little and bending closer I spotted another little hand and then a pink nose, just poking out of the soil. It really was a mole! What had made him look is a mystery, but he does have a knack for finding odd things in unexpected places. 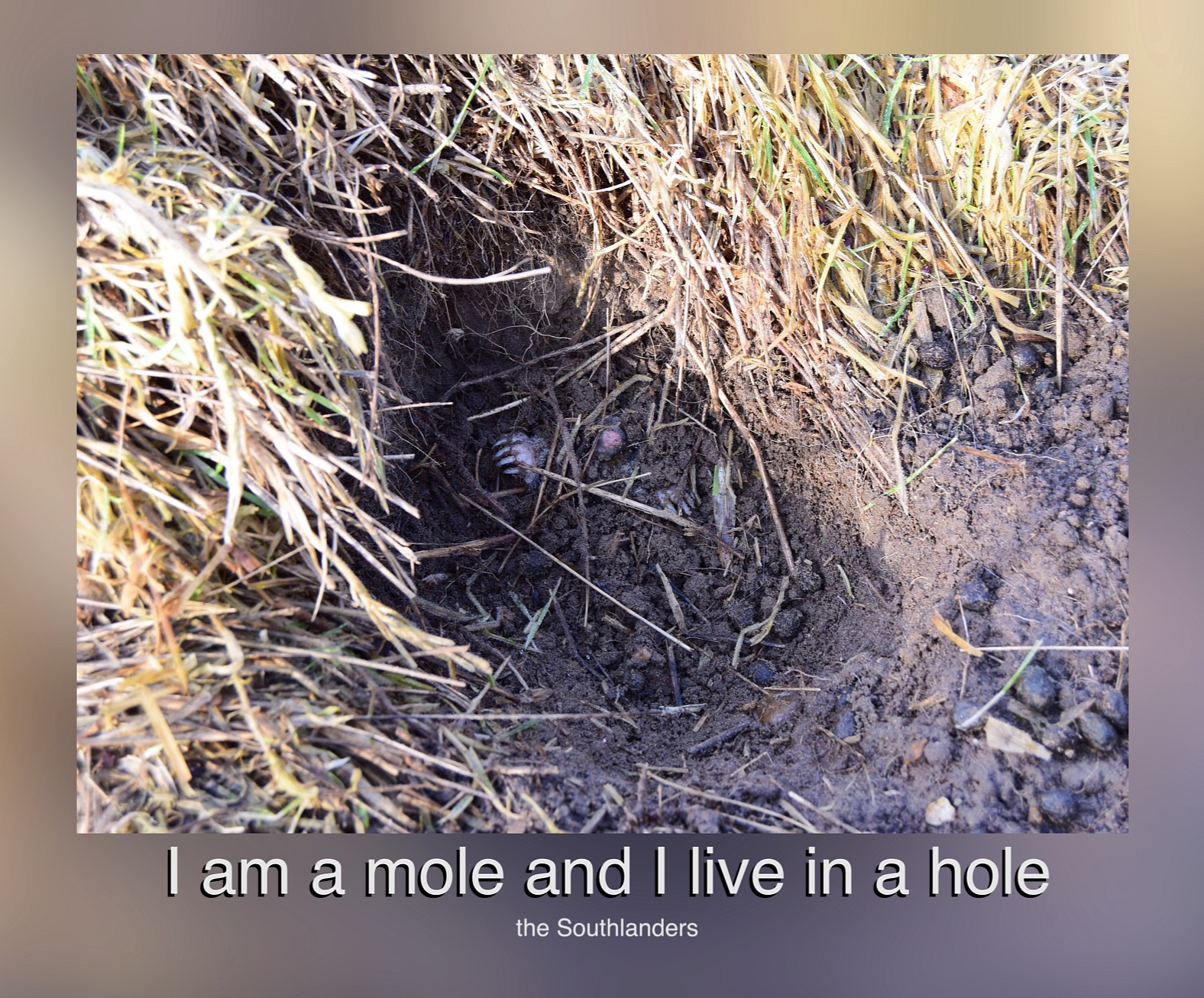 Once I’d taken some photos CJ picked up a small stick and, thinking the mole would run, perhaps out into the open, he gently poked it. Nothing happened. He poked a little harder. Still nothing. The poor mole was stone dead, by the looks of it frozen solid. Whether it was the cold that killed it or something sinister, we couldn’t tell but we walked away feeling sad that our first ever sight of a real live mole had turned out to be a real dead one. Maybe he just died of exhaustion from digging all those holes. 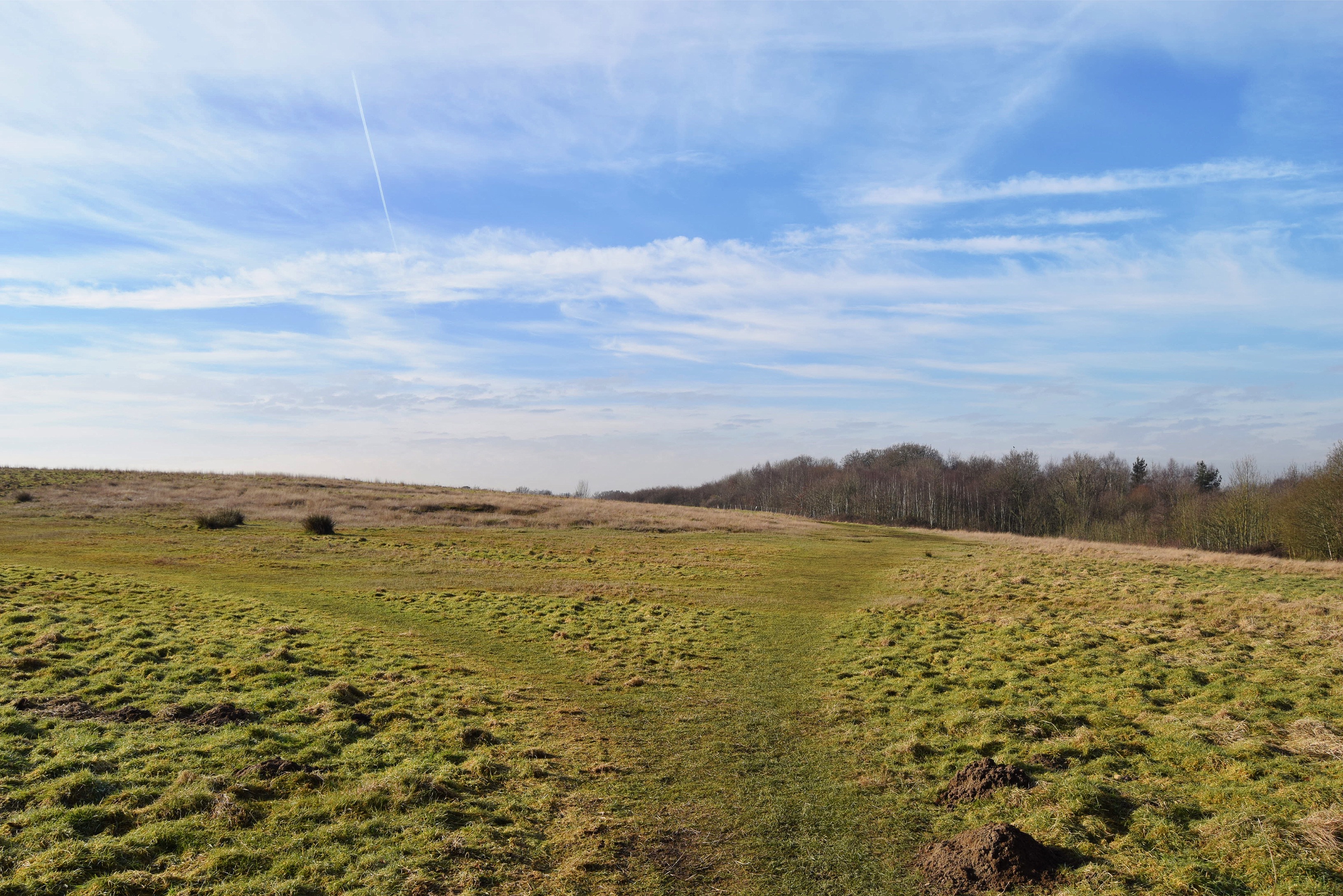 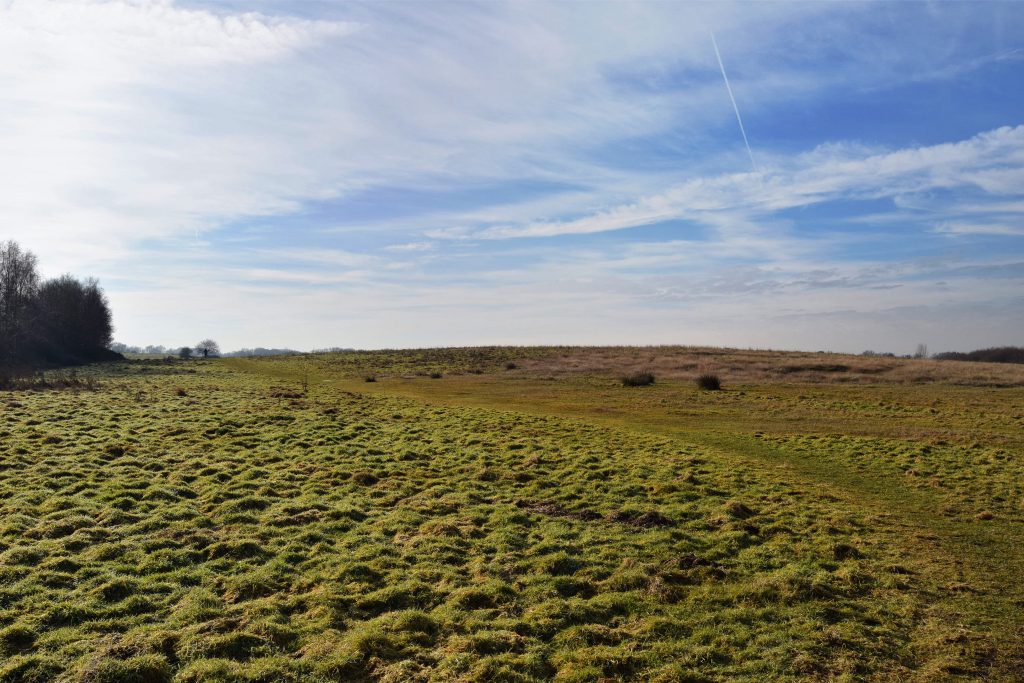 The trail we were on skirted the trees at the bottom of the hill and, on any other day, would probably have been too muddy to follow. Today though the mud was frozen solid and thick ice sat on top of what would normally have been large puddles. 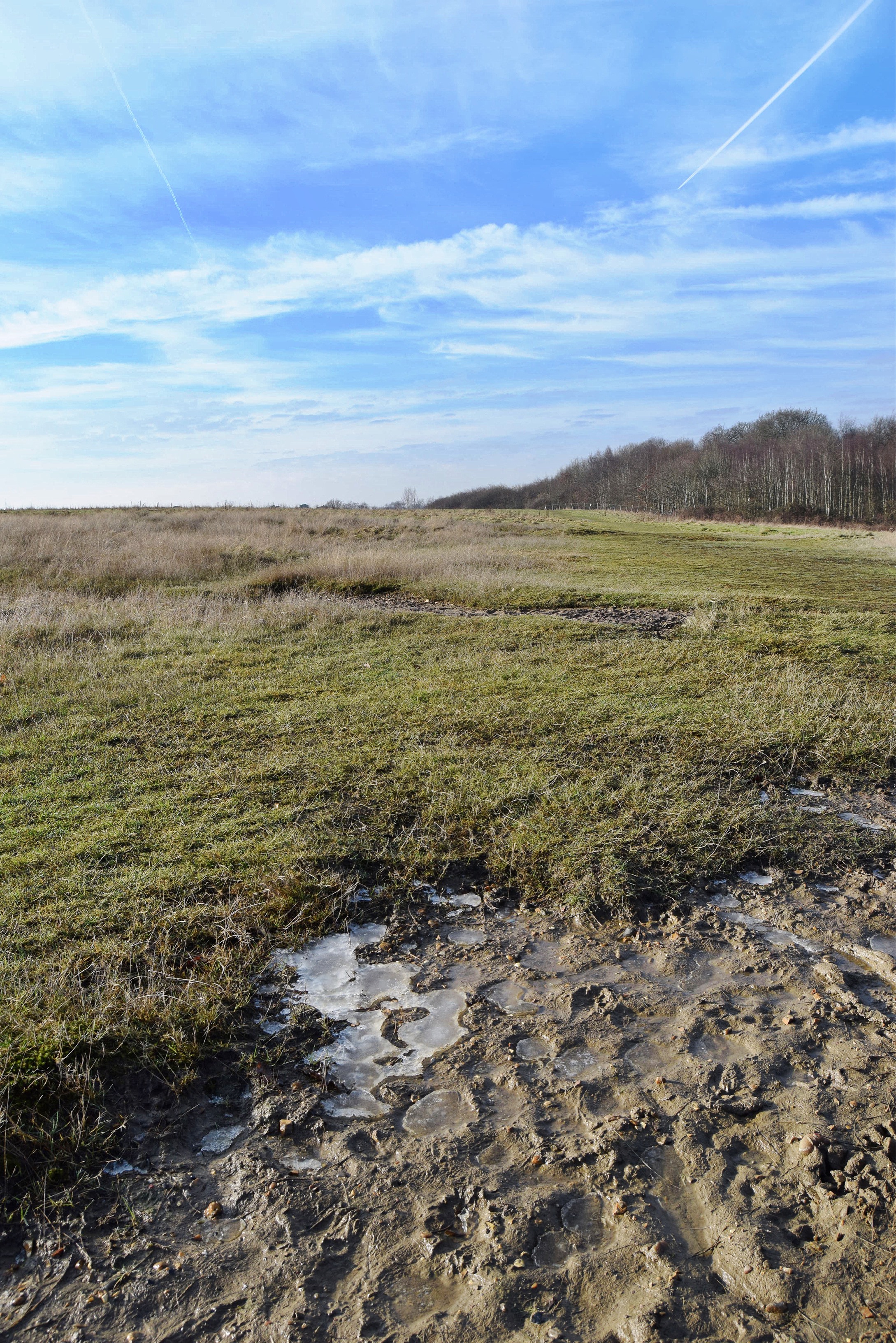 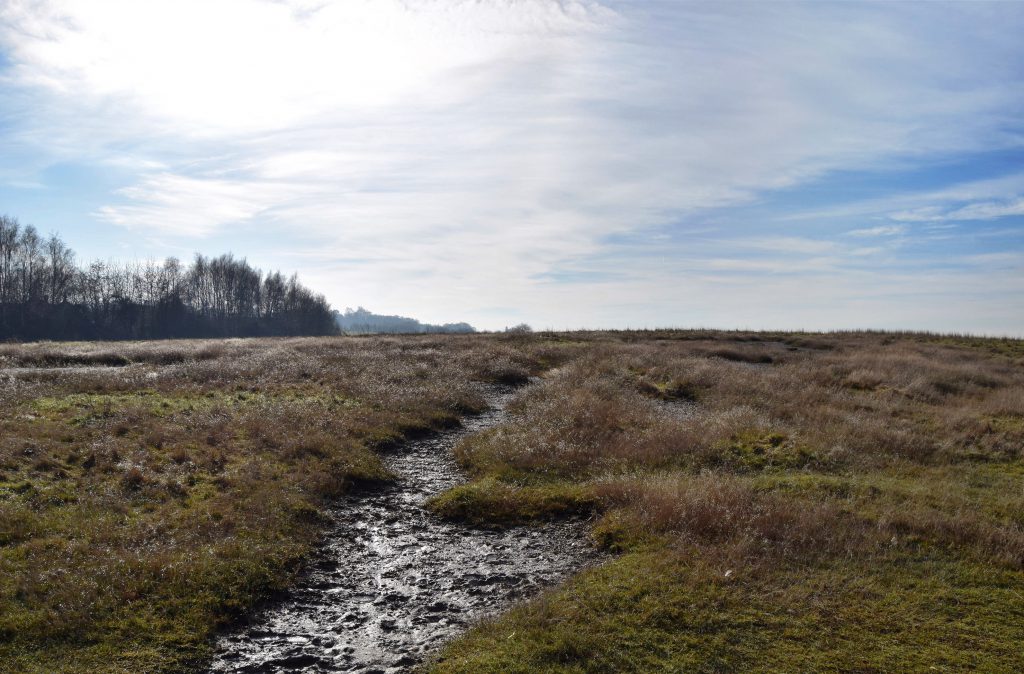 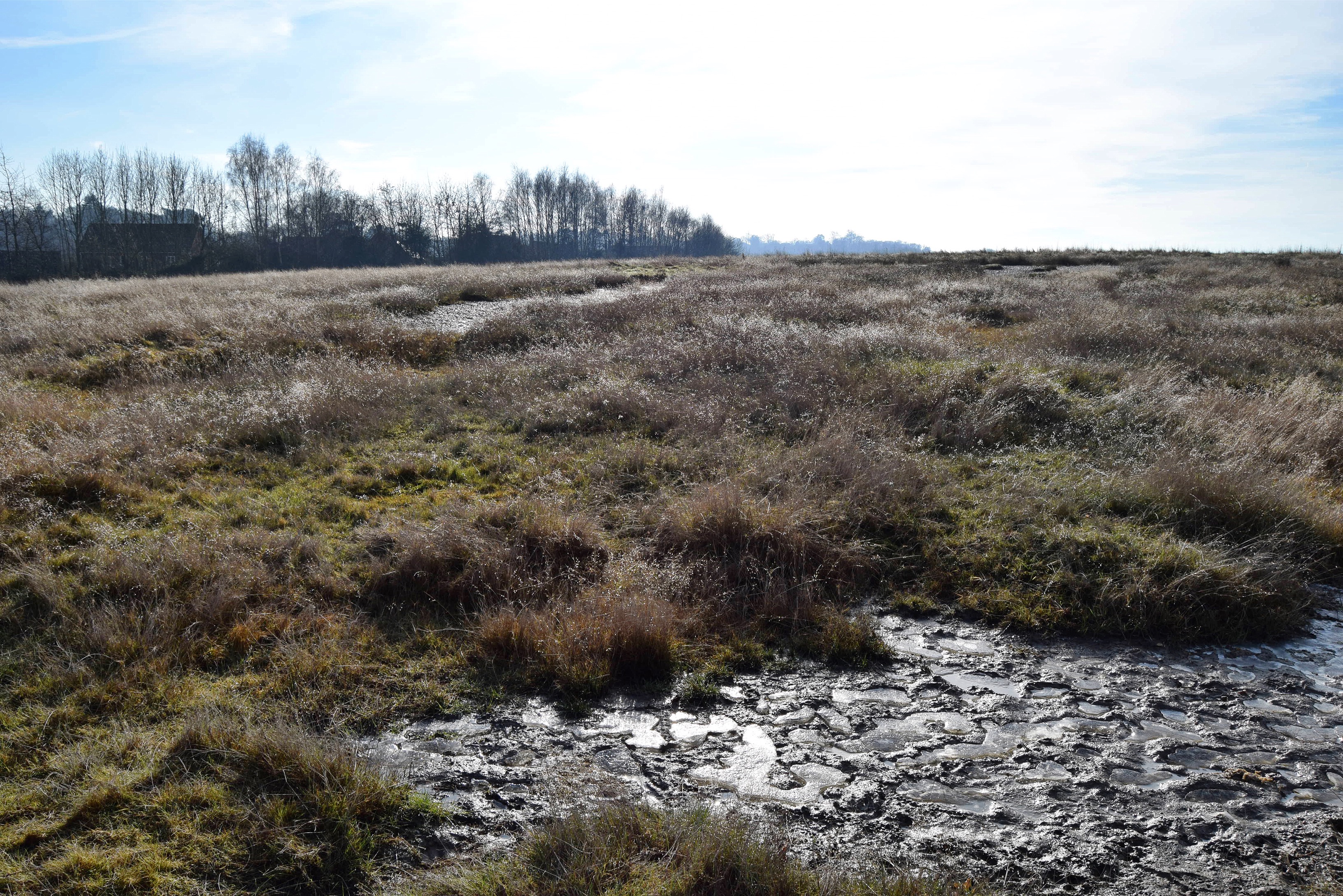 A large stretch of the path was coated with ice so thick I doubt it had melted since this cold snap began. We skirted the edges of it and crossed the mole hill speckled field. Once this was farmland and dairy cattle would once have grazed here. As West End village grew Quobb Farm and Hatch Farm were slowly eaten up and the Hatch Farm farmhouse was badly damaged by bombs in World War II. It was finally demolished in 1990 and, as far as I can see, there is no trace of it left. 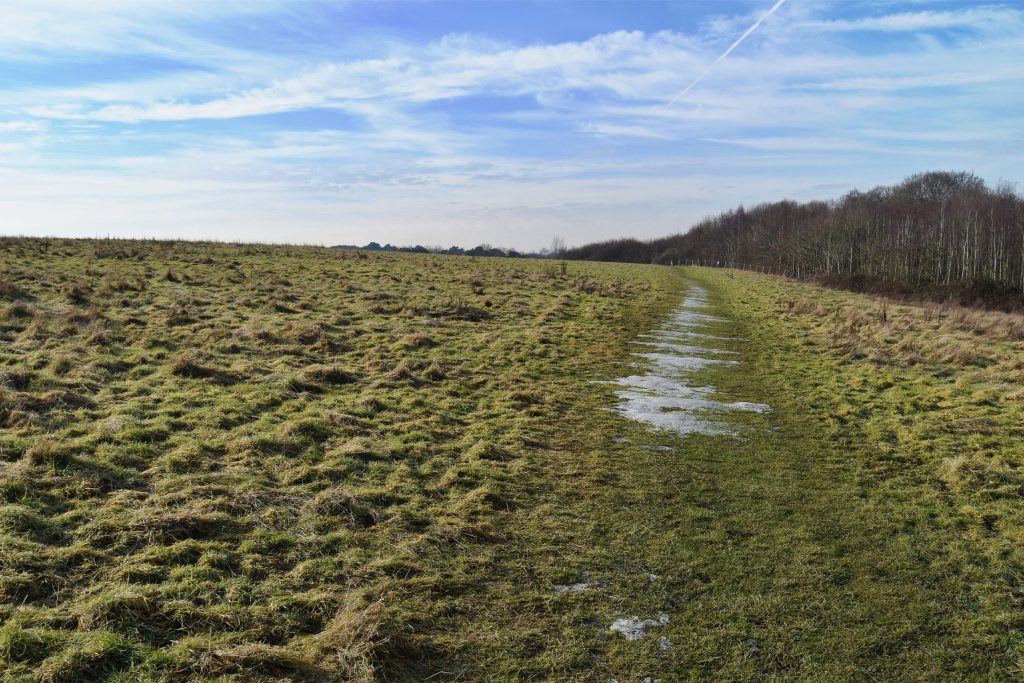 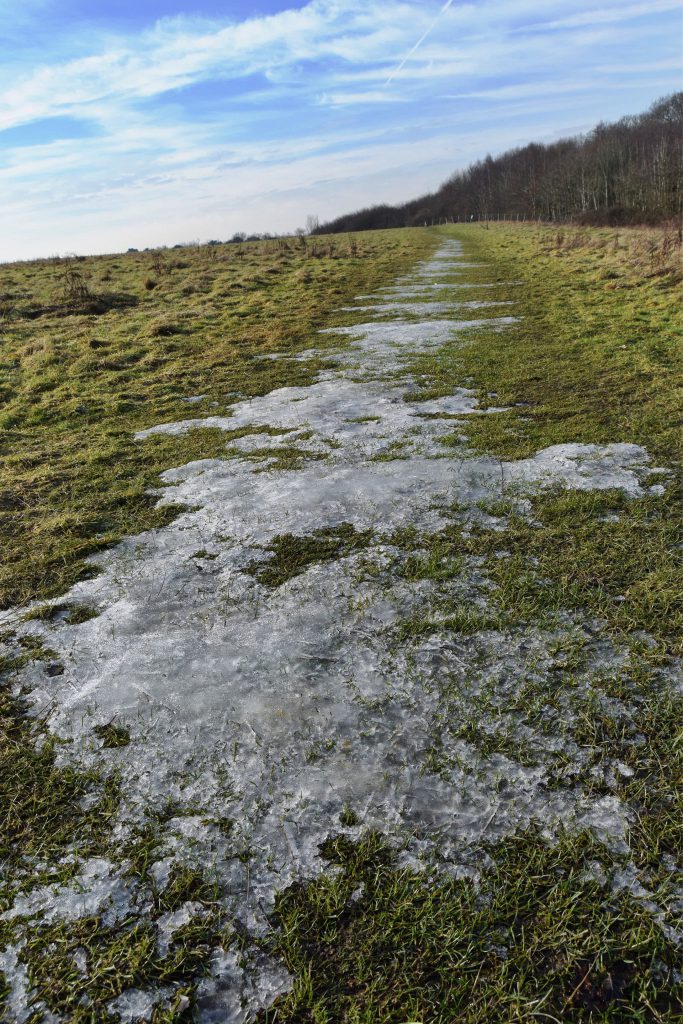 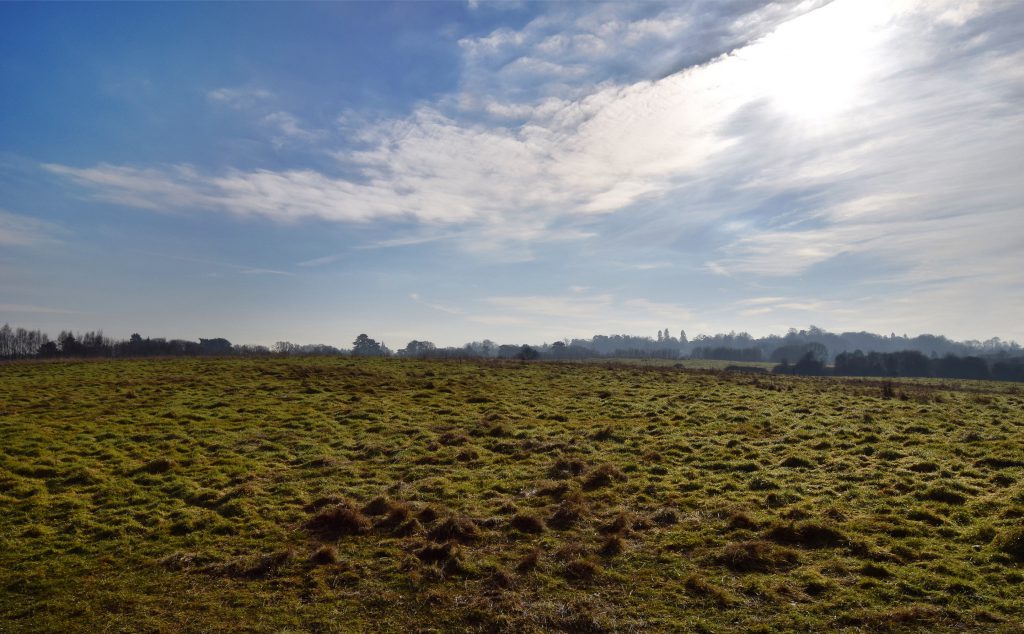 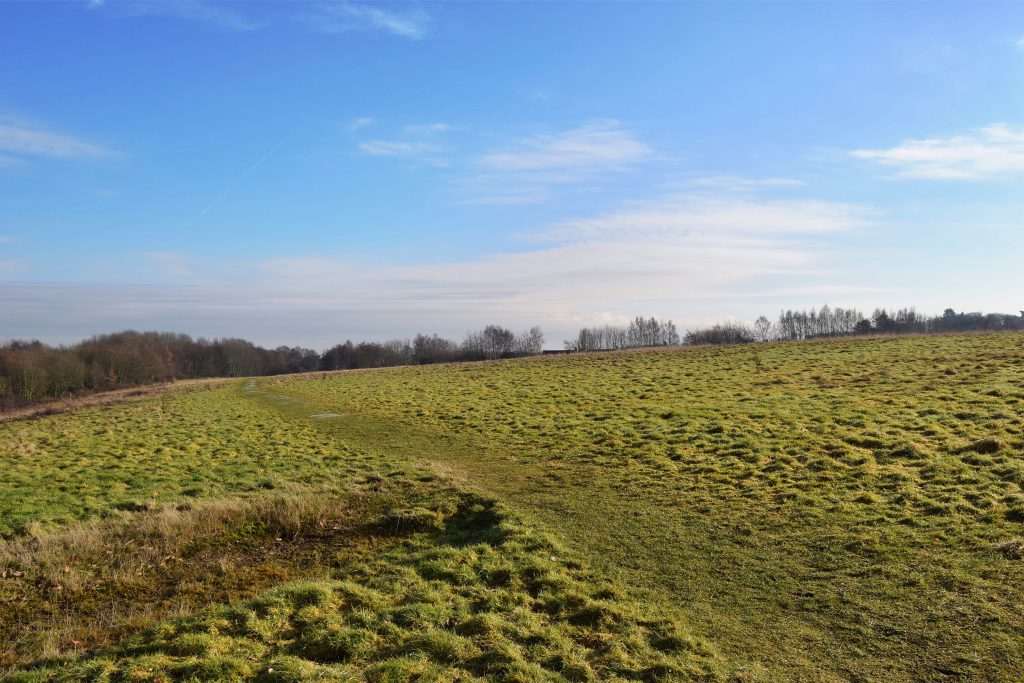 Sadly, if Eastleigh Borough Council have their way there will be no trace of this meadow or the footpath we walked on soon either. They have plans to build houses here, eating up about a third of the land and leaving just the hill, which I guess is too steep to build on easily. While I appreciate the need to new houses, I do wish they’d build on some of the brownfield sites rather than places like this. 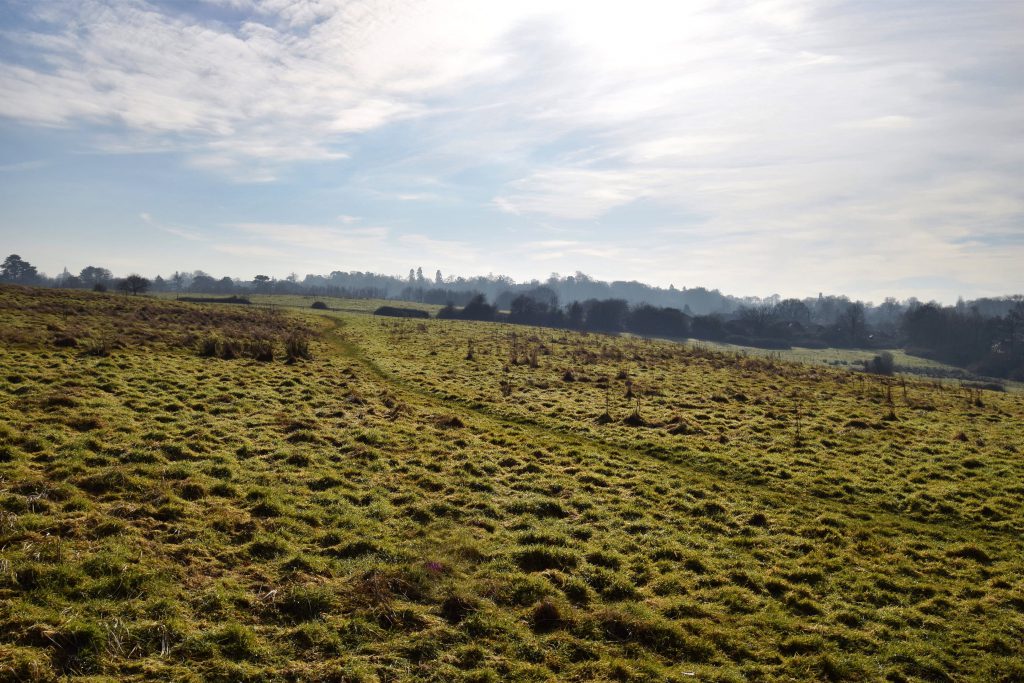 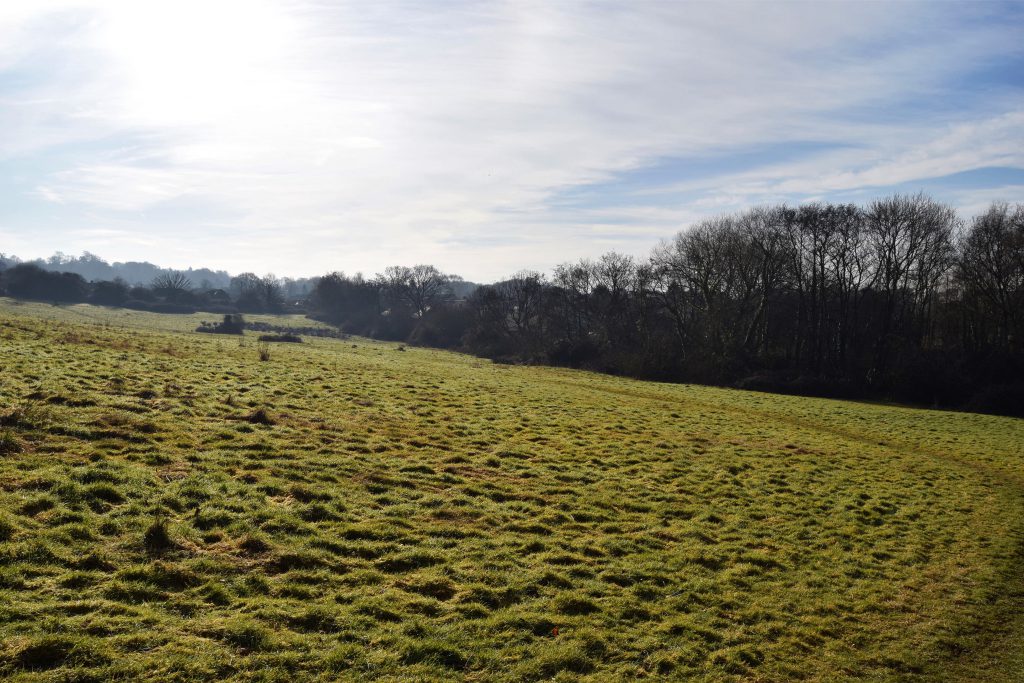 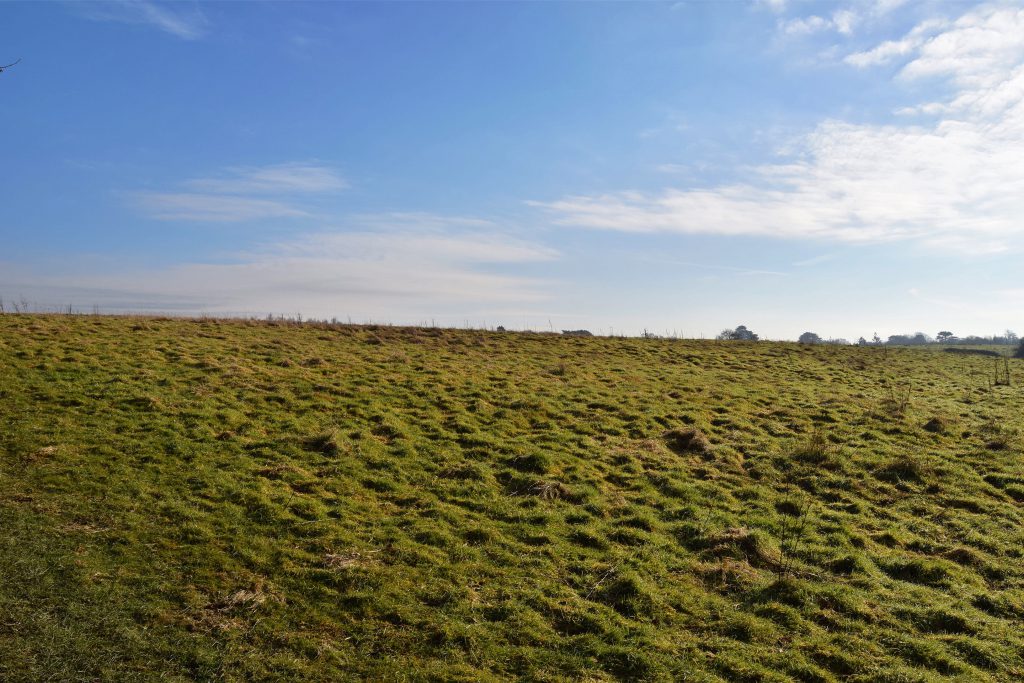 Little by little we reached the far side of the field and the footpath I discovered last July. This too is going to be a casualty of the house builders. It may not be the prettiest footpath in the history of the world but I, for one, will be sad to see it close. 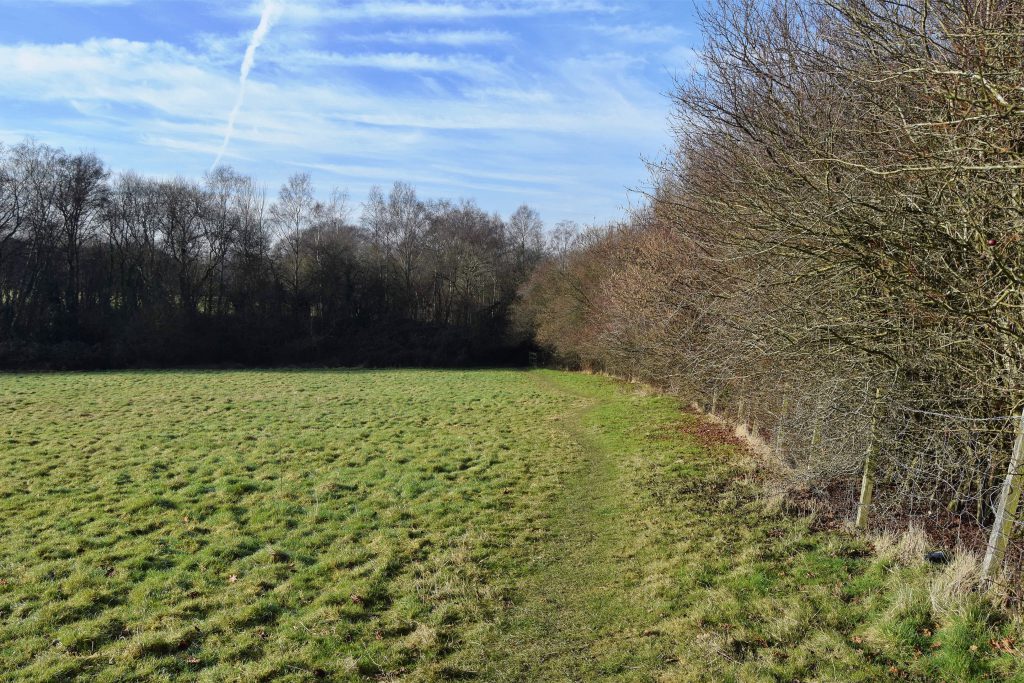 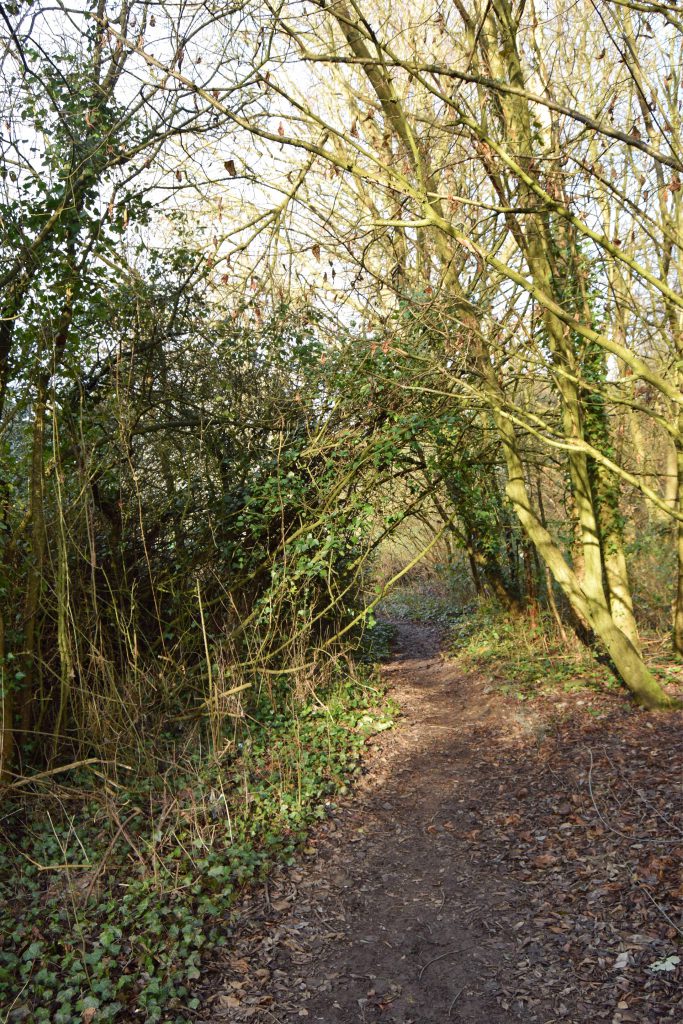 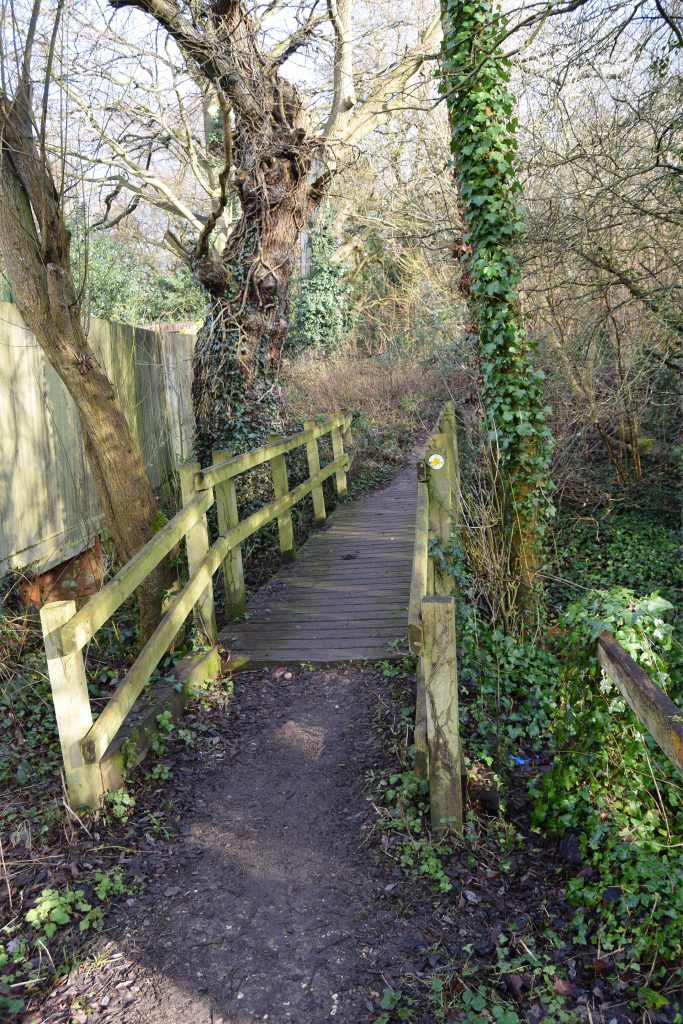 Before long we were back on the road, close to the beginning of Allington Lane.  now it was back to the traffic and modern, box like houses for the rest of our journey home. It seems a terrible shame that the meadow behind us will soon be more of the same. At this rate there will be nowhere left for the poor moles to dig their holes. 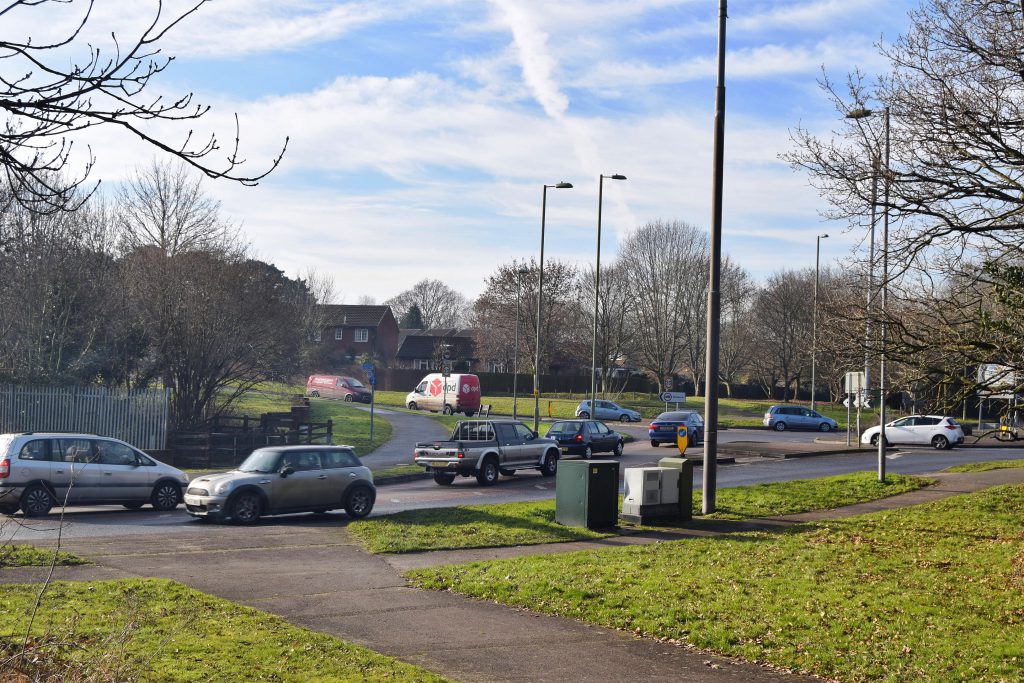 As we walked back home we passed All Hallows Church on Witts Hill. The church was built in the mid 1960’s and has been a landmark on the corner of the road almost all my life. Last time I passed this way it was boarded up and fenced off. Now it’s gone, leaving just a muddy, rubble strewn plot and a man with a digger. Perhaps the people of Midanbury aren’t all that religious, and any that are will have to find another church. It’s sad to see such a landmark disappear but I suppose it’s better that houses are built here, rather than on the green fields of the city. 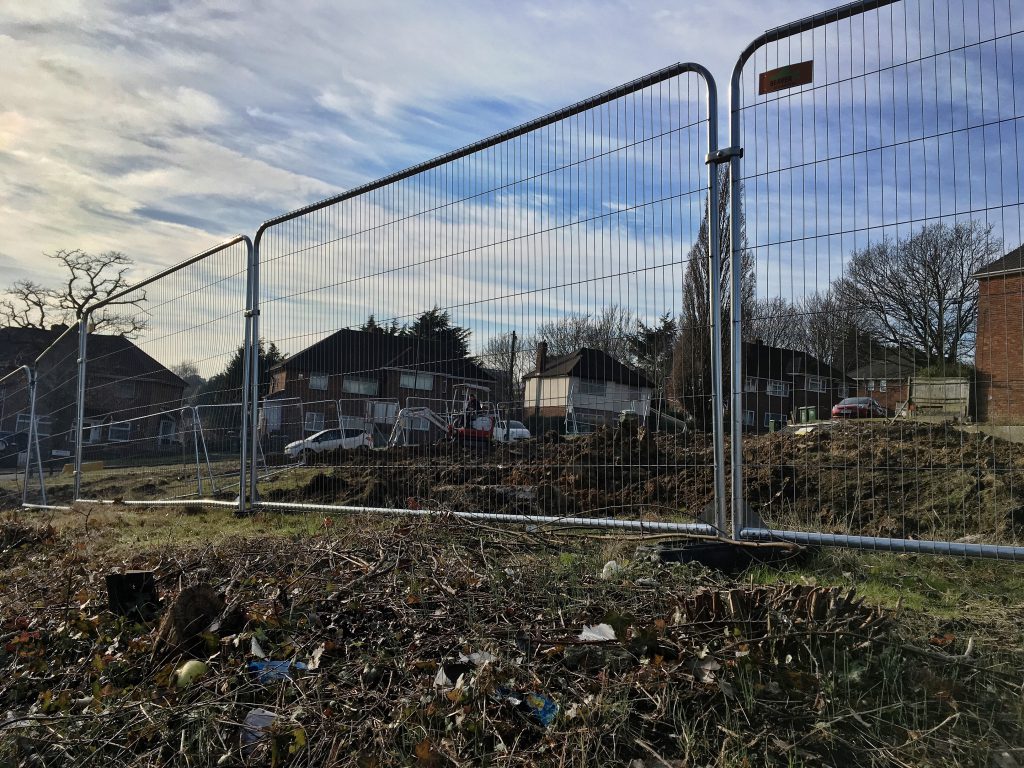 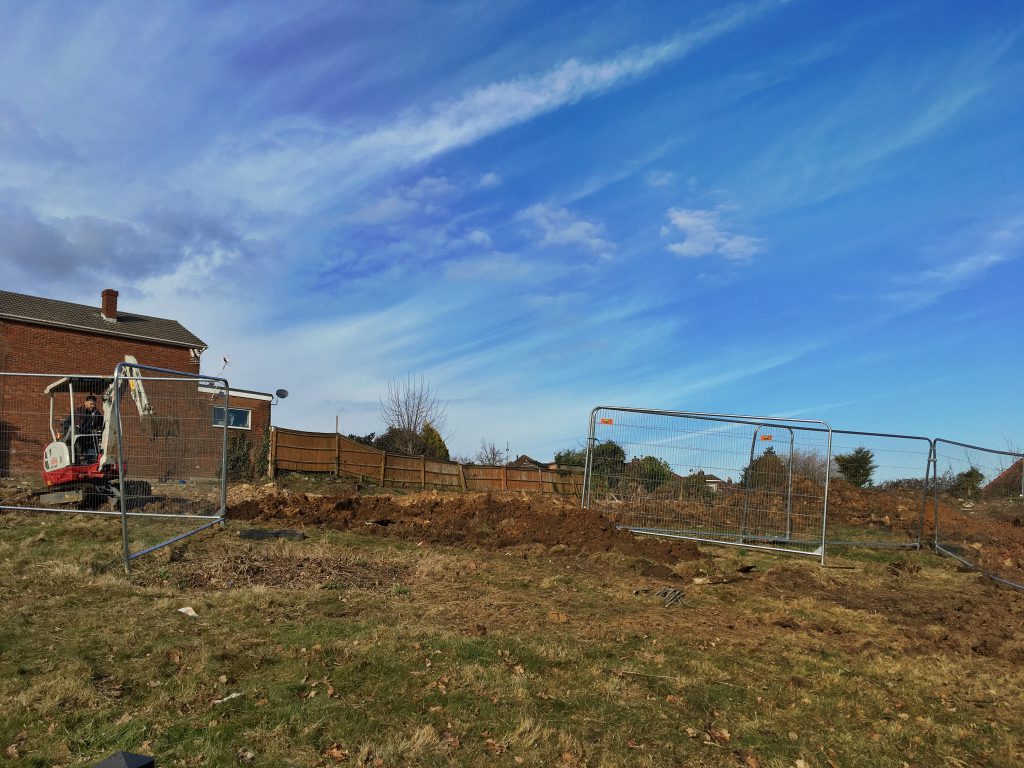 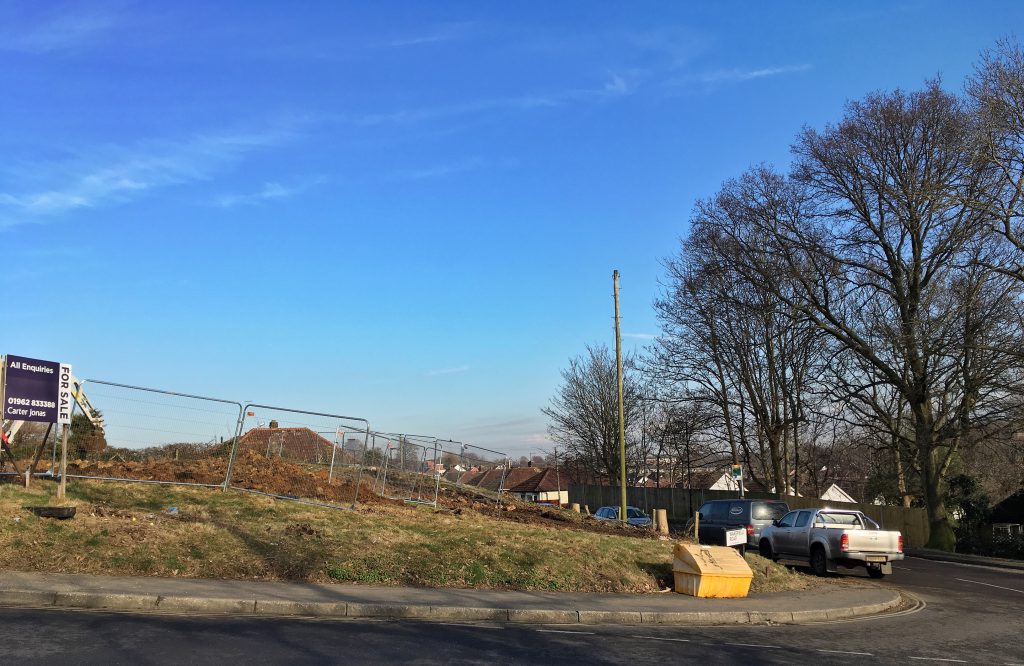