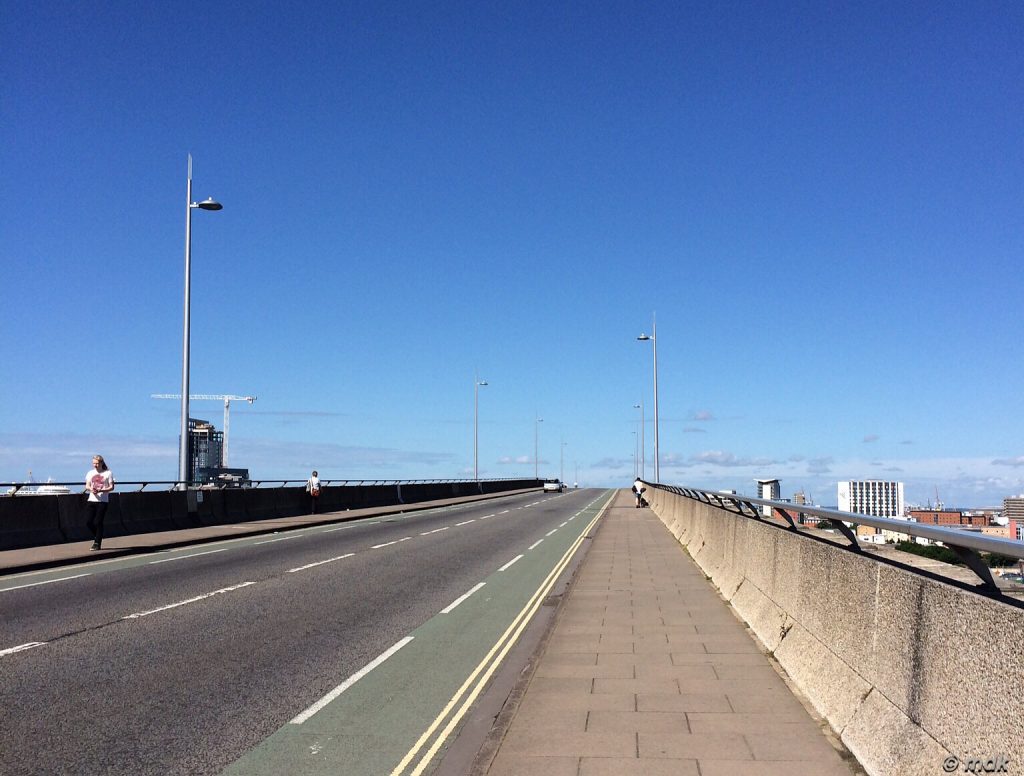 What I’d planned to do for my second weekend walk of June 2014 was check out the Hamble Rail Trail I stumbled upon last November but didn’t have time to explore. When I say planned, I mean thought about briefly without getting any concrete information or working out distances. In truth it was a vague whim rather than a real plan and it all fell apart as soon as I began trying to find out more. This may have been because I left it until breakfast time on the morning of the walk. For a start I couldn’t find a decent map of it and, as I found the start of it by accident, I wasn’t sure I’d be able to again. Then I worked out it would mean a lot more miles than I thought. The torrential rain of the previous couple of days didn’t exactly fill me with confidence either.

As my original, rather vague, plan for today’s walk looked like a no go due to wetness and distance, I resorted to plan B, although I was slightly hazy on the mileage. To be honest it was more than a little cobbled together so I think I’ll explain it as I go along, which is more or less how I planned it too. The first part of the plan was to check out the progress of the road works that have been bringing chaos to the centre of the city since I was working at Silver Helm. As these involve repairs to Central Bridge and a complete change to the road layout all along the front of the docks and Cruise terminal I started off up the Little Hill towards the New Bridge.

Despite the warm sticky weather, I made good time along Peartree Avenue and soon I was climbing the steps to the bridge. At least it was cooler at the top and I don’t think I’ve ever seen the walkers outnumbering the cars before either. I suppose that’ll be the combination of road works and Sunday. Down on the water it was all action with little boats buzzing about all over the show. Then I reached the other end of the bridge and got my first sight of the road works. Right now you must be thinking, ‘what’s so interesting about road works?’ Please bear with me though because you’d be surprised. 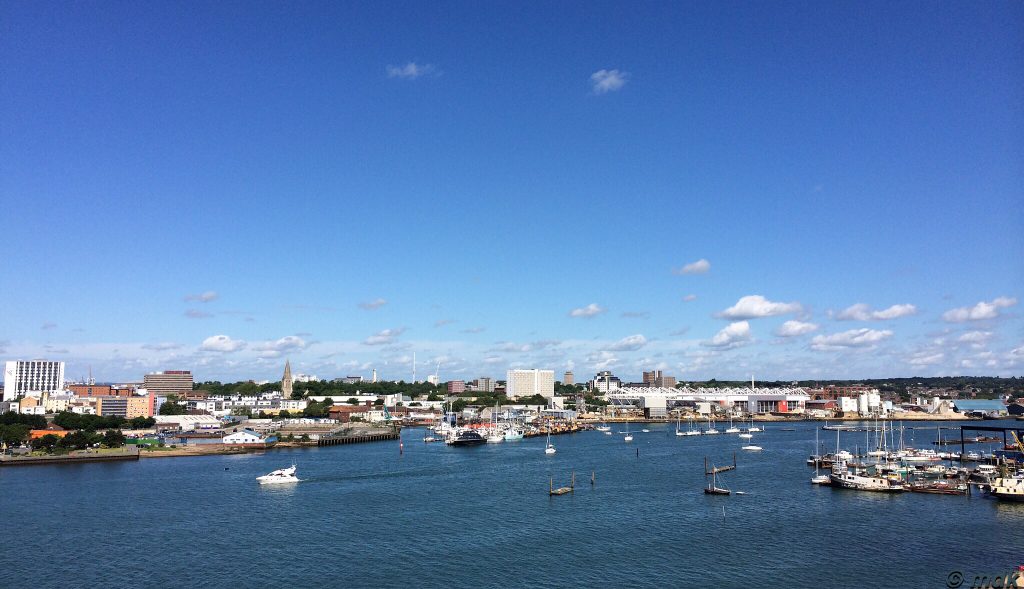 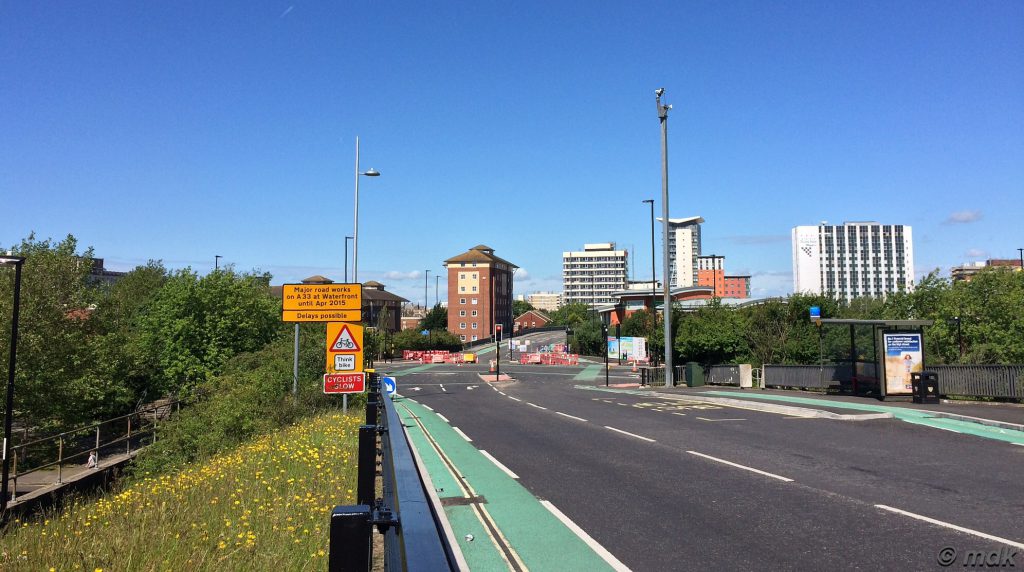 Southampton is a city filled with history and, even though it was badly bombed during World War Two, a fair bit of it is still standing, especially at the bottom end of town by the water. Central Bridge is part of that history. Built in 1882, it was designed by William Jacob, the chief engineer for the London South Western Railway Company and carried the road linking the old floating bridge over the railway line leading to the docks. Made of riveted iron box girders and piers it has beautiful cast iron balustrades and lamp standards. The approach in Terminus Terrace is over an attractive red brick viaduct, now used by some small businesses, I passed them every day when I worked at Silver Helm. Right now it is completely closed. 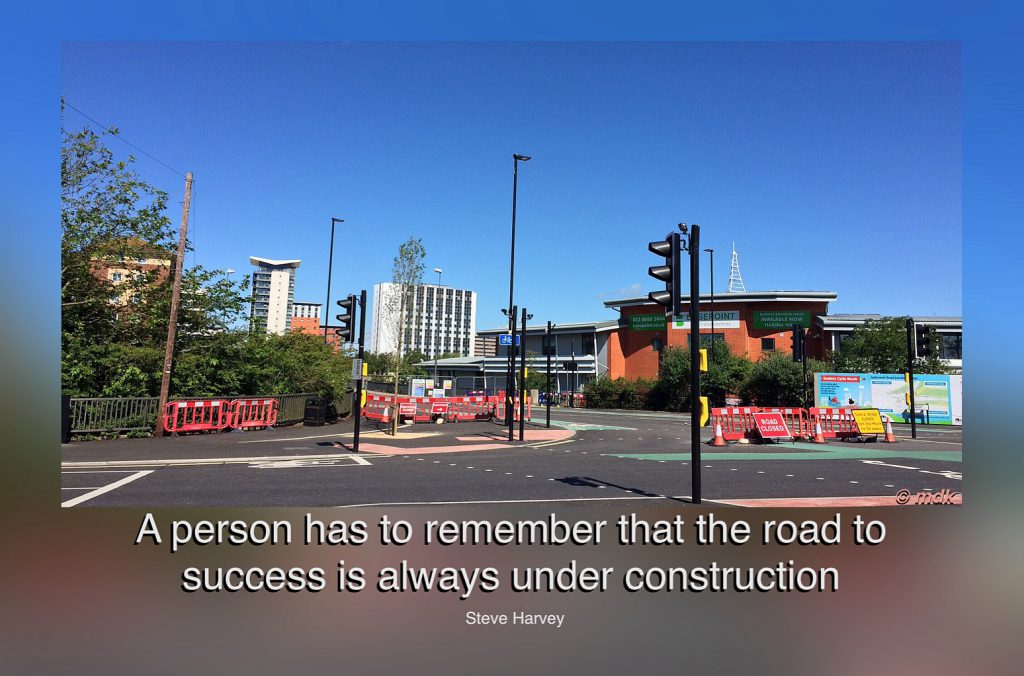 I’d hoped I might still be able to walk over but I couldn’t so I went through the underpass and came at it from below. Unfortunately my photo wasn’t the best but I promise I will come back once the repair work is finished. The work is fairly extensive by all accounts and involves replacing drainage and waterproofing so don’t hold your breath because it’s likely to go on until autumn. Meanwhile there are almost constant traffic jams on the New Bridge. Ok, so there weren’t any right at that moment. To be honest I was half disappointed by that, there’s nothing like a traffic jam to make a walker feel all smug.

Still, my unplanned detour did take me past the old railway goods shed, also a listed building. This wonderfully gothic brick edifice was built in the late 19th century as the railway rapidly grew in importance and may have been designed by Sir William Tite, although no one seems sure. Who ever designed it, it’s a thing of beauty. 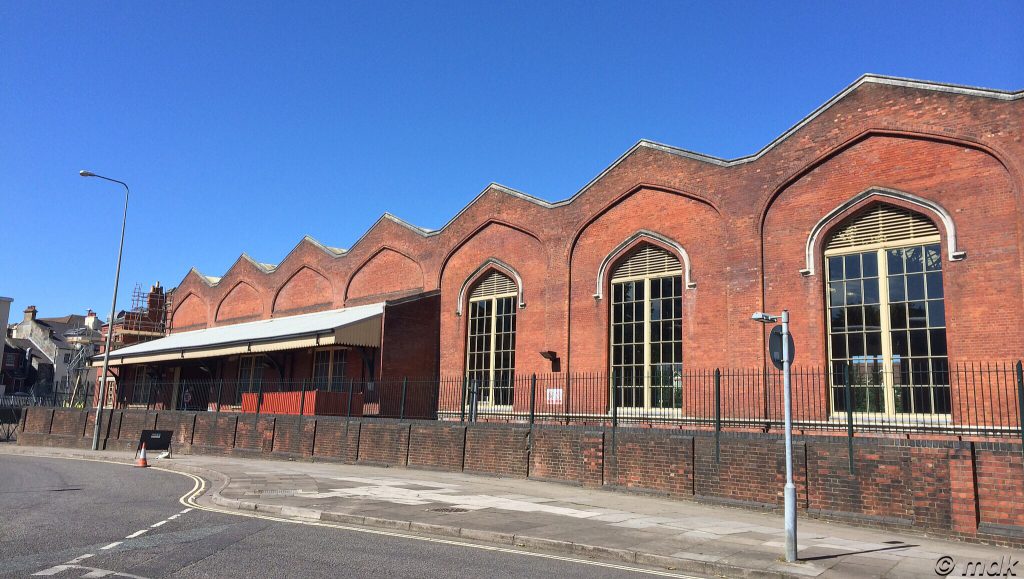 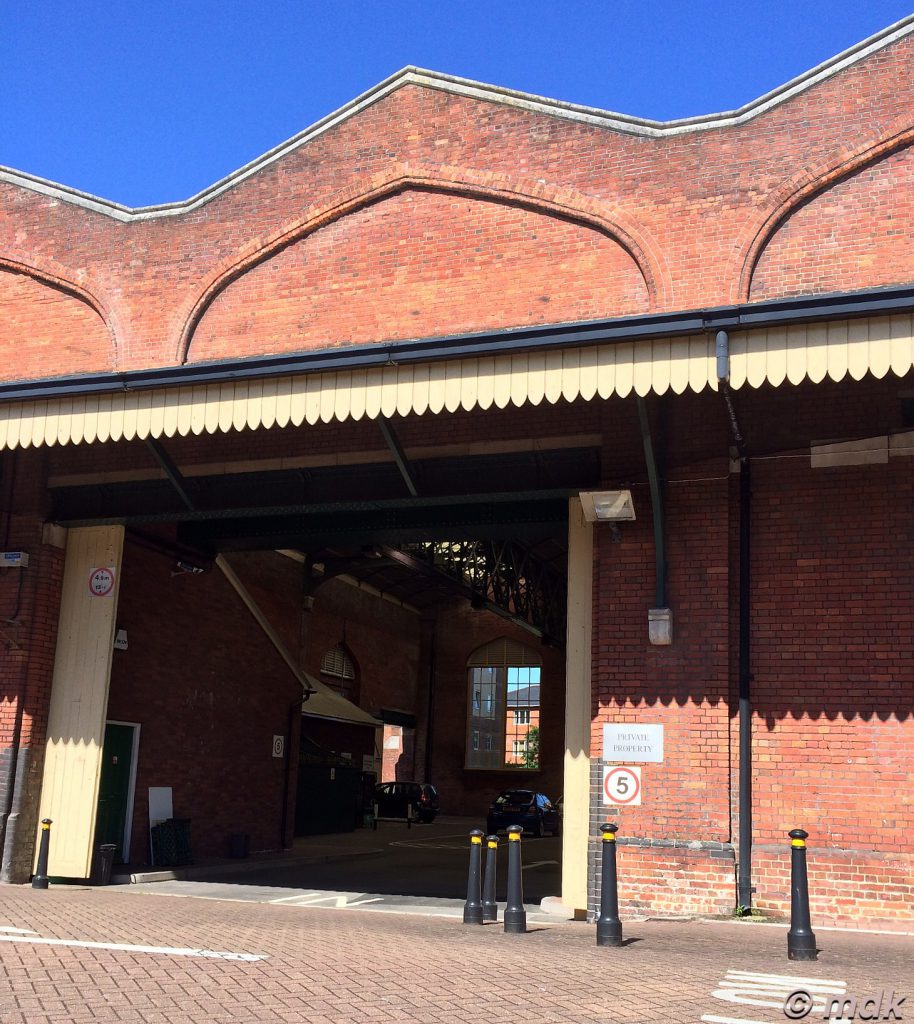 Around the corner on Canute Road, once the main route to the docks and the main railway station, the impressive Bank Building, built in 1896 for Grant and Maddisons Union Bank, is dwarfed by the new Ocean Village development. In fact the Ocean Village entrance sign has been plonked unceremoniously on the side of it. Towering above, yet another tall block of apartments is in the process of being built. Personally I prefer the red brick bank building with its Portland Stone columns but what do I know? 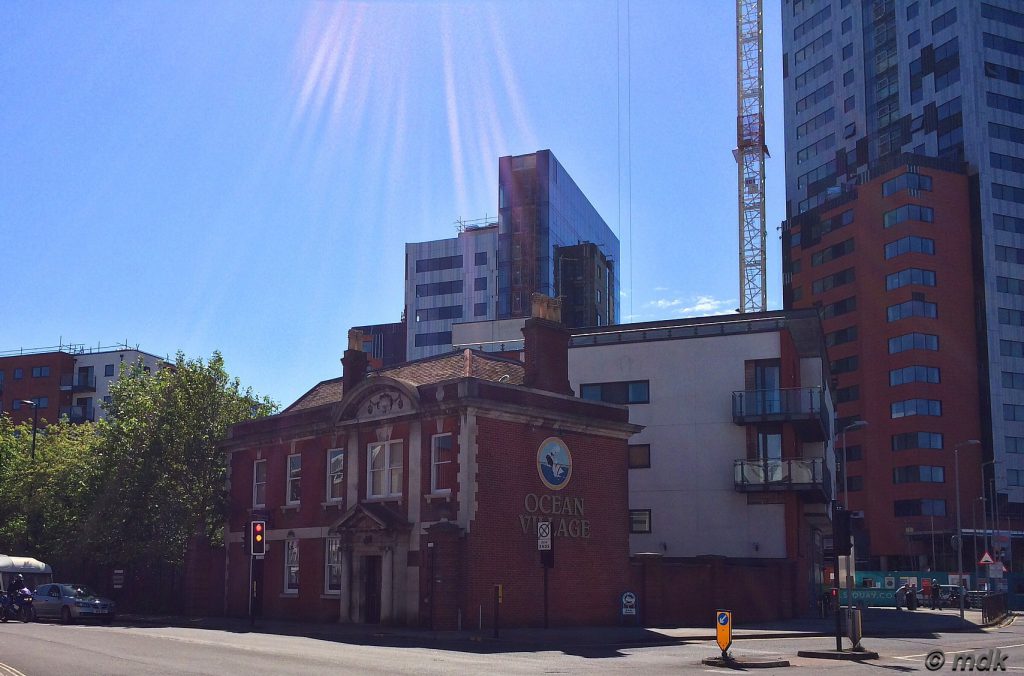 If I’d taken photos of every interesting building along here I’d still be out there walking now but some were so good they just couldn’t be ignored. One of them being Maritime Chambers, dating from 1899. The yellow bricks alone were worth stopping to take a photo even without the frieze on the pediment in the centre. The initials LSWR, stand for London and South West Railway so I’m guessing it was originally a railway building. During World War One it was used as an embarkation office and, after that, the shipping companies, including White Star, Cunard and Dart Container Line took over. Nowadays it is yet another apartment building. 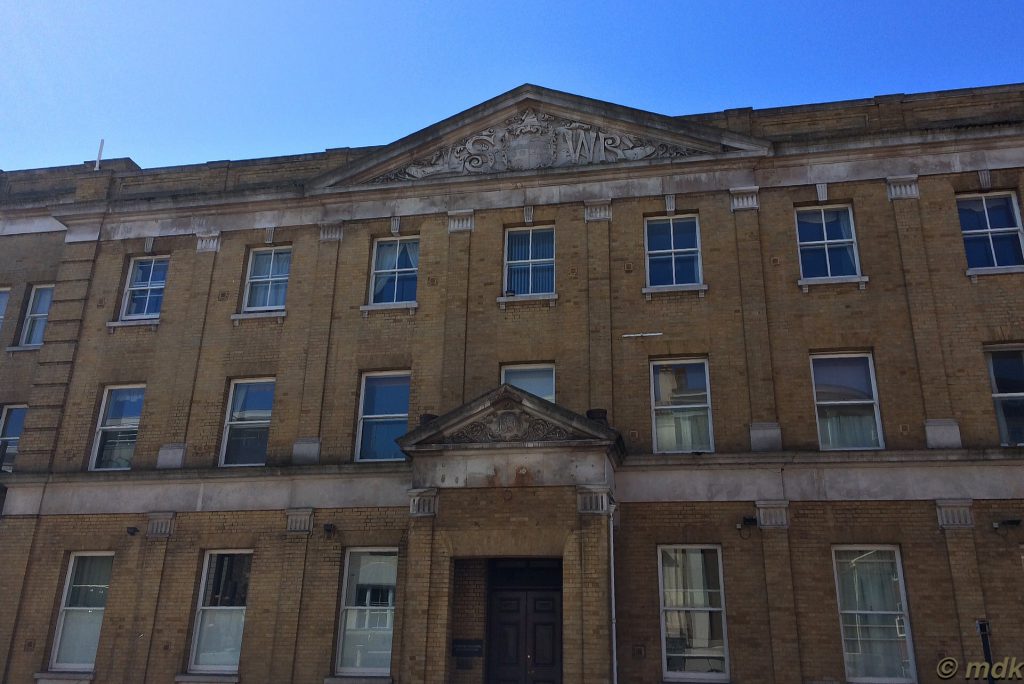 It wasn’t long before I reached the next lot of road works. These are even more disruptive as they extend along the whole of Platform Road, where the cruise and ferry terminals are, and cut off the main route from the docks to the Itchen Bridge. Until recently this was a one way system with traffic going towards the bridge looping round behind Queen’s Park and back onto Canute Road. It has always been congested, especially when a few big liners arrive at the same time, but the work to turn it into a two way road have caused gridlock for months. I was pleased to see traffic flowing in both directions but there doesn’t seem to be any end to the cones and barriers yet.

On the corner is one of my favourite buildings, South Western House, built in the 1860’s. It has a rather romantic history. Originally a hotel used by people en route to the big ocean liners, the first class Titanic passengers would have spent their last nights on dry land here. It’s a lovely and rather regal building with the white stone arches and painted frescoes. My first full time job was for British Rail in the Data Input Centre. The office was originally situated in South Western House but, sadly for me, moved to Central Station just before I started. What a place to work! These days it is rather plush apartments and a nightclub. I wonder if anyone ever thinks about those Titanic passengers as they’re dancing the night away? 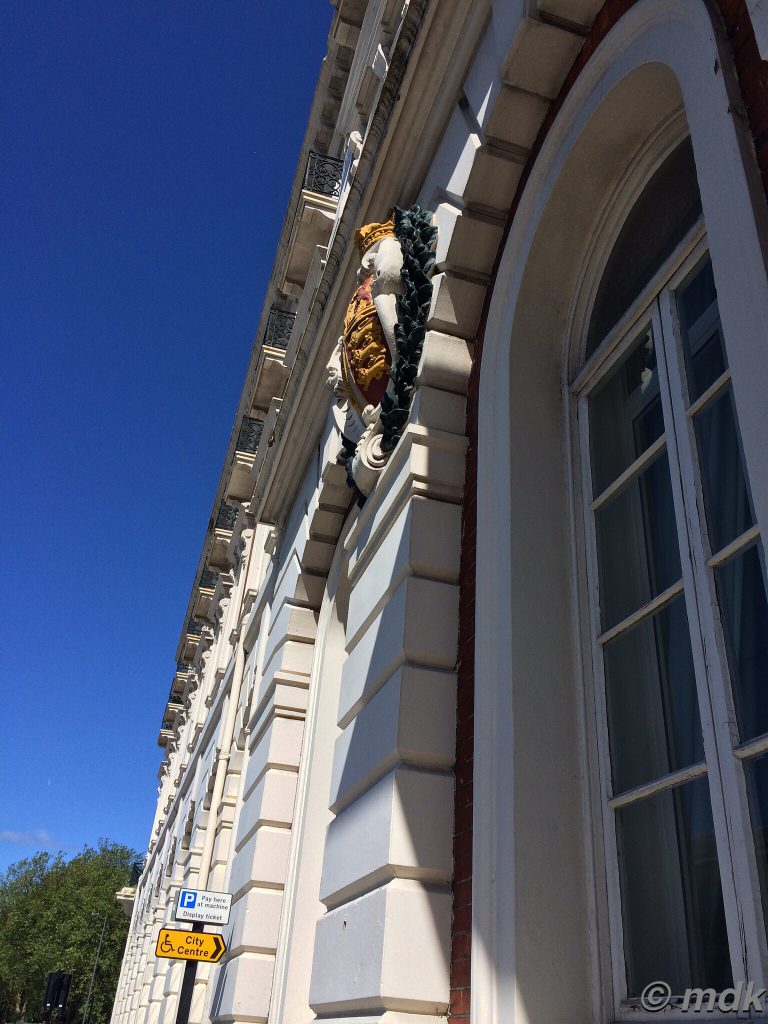 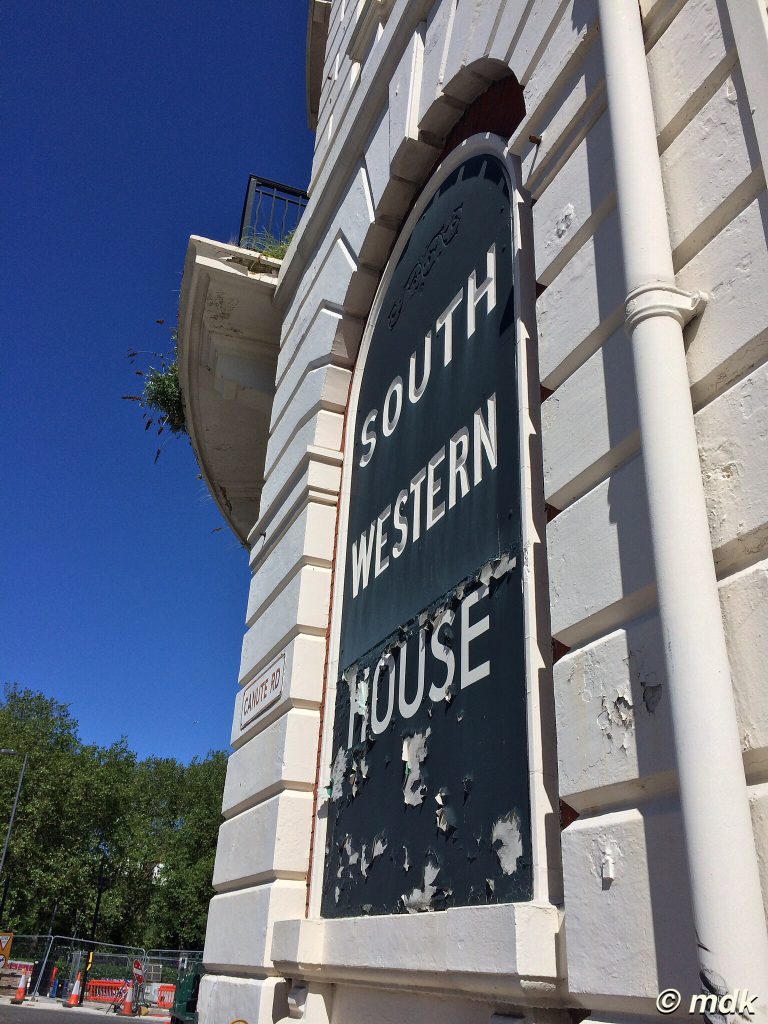 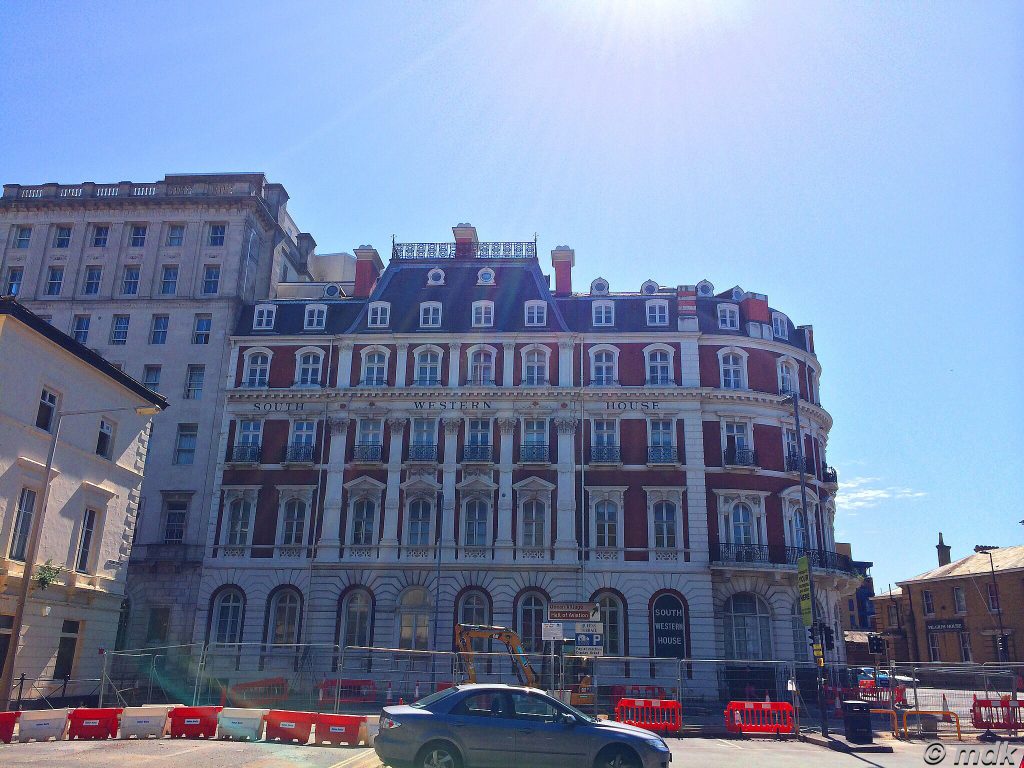 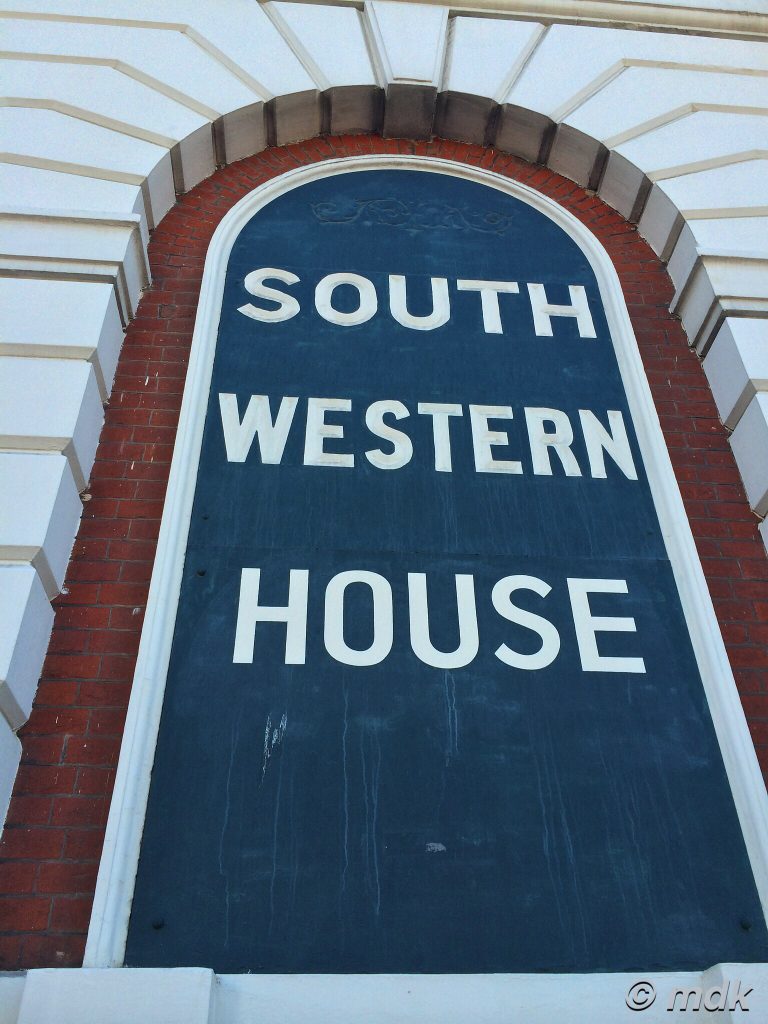 Across the road in Queens Park a huge pile of old kerb stones from Platform Road were piled up behind wire barriers. They looked like rubble from the old walls for a moment. I wonder what they’re going to do with them? Rather than walk through the park I cut back onto Platform road to take a closer look at the road works. The mound of earth in front of the old Post Office building seemed to make it look more imposing if anything. Built in 1902, it stands all alone to show its importance as a post office for the docks. In 1967 it was converted into a telephone exchange and, in the late 1990’s, became yet more luxury apartments. There is certainly no shortage of places for the rich to live on the waterside but I wonder if they appreciate the history of the places they buy? 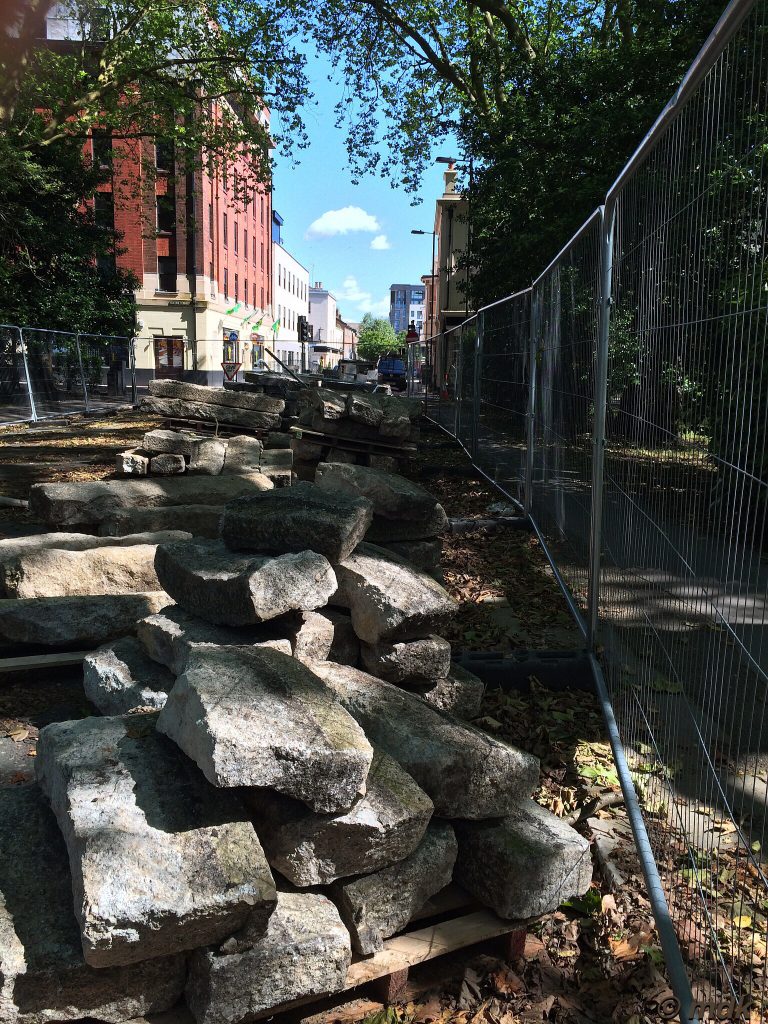 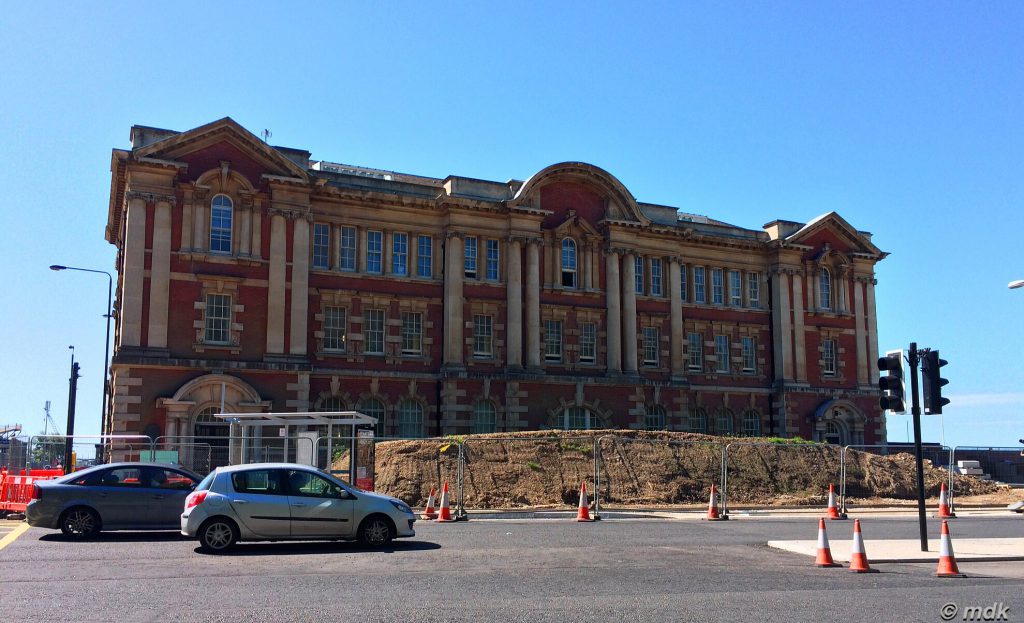 Close by, the entrance to Ocean Terminal has been improved by the road changes. Hopefully this will eventually put a stop to the traffic jams when several large liners come in at the same time. Last week nine came in at once and the city ground to a halt. People, including Commando, were stuck in it for hours, which can’t be the best introduction to the city even if it does provide a great view of the old walls. 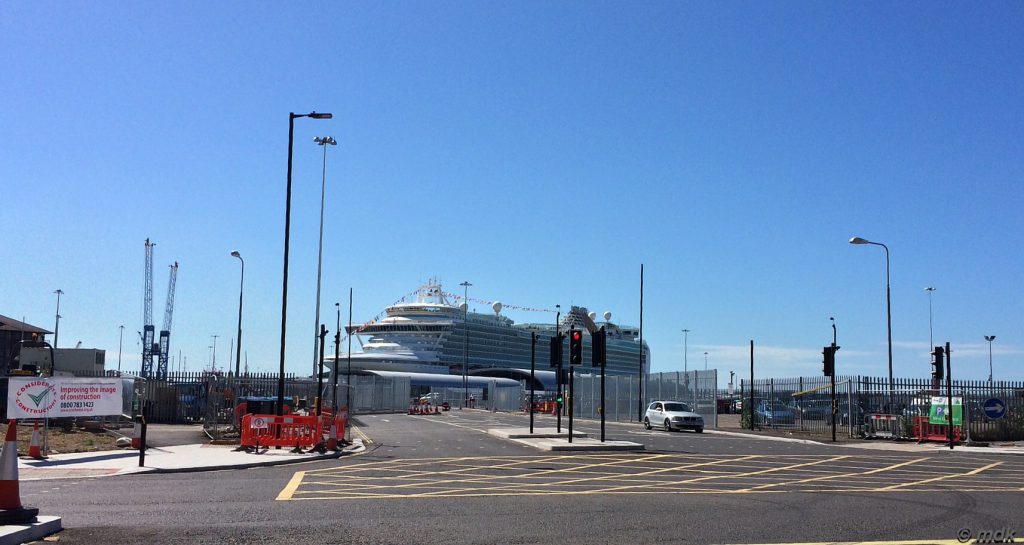 This is where the real history of the city starts. On the corner, almost opposite Ocean Terminal is God’s House Tower. This 13th century building was a gatehouse to the town and has served as the town gaol and a museum. These days it’s closed but you can still walk through the arch. Whoever decided this would be a good place to put a bottle bank deserves a good talking to though! 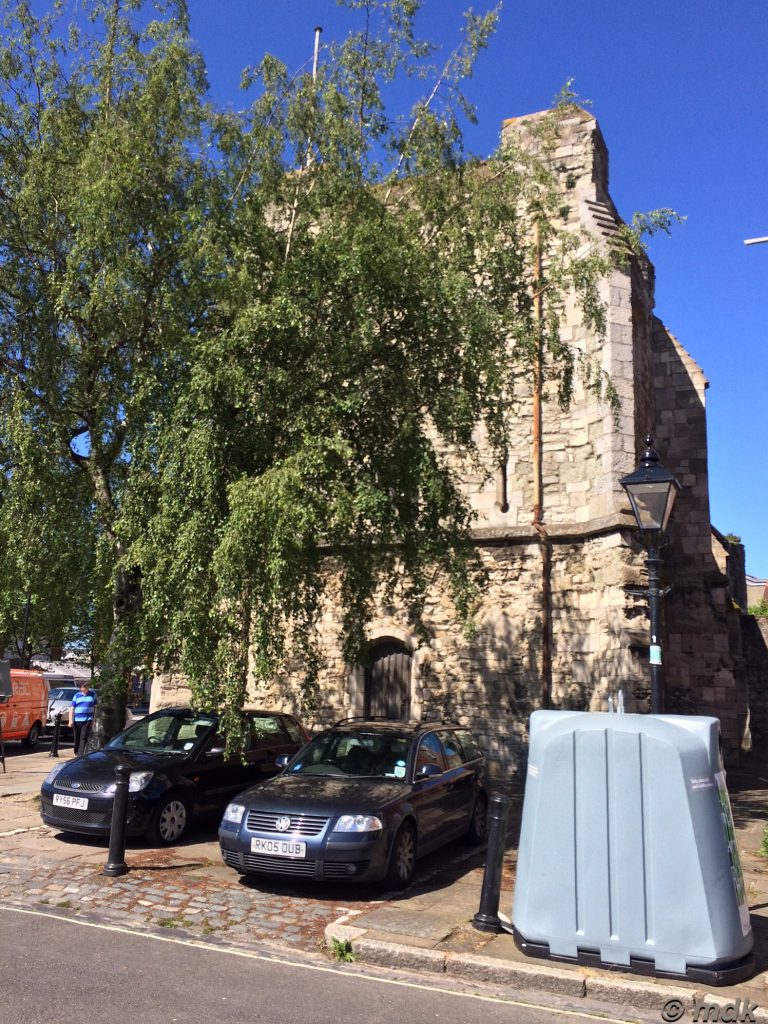 The old walls have featured here a few times but, at the risk of going on, I am going to tell you more but not until later.