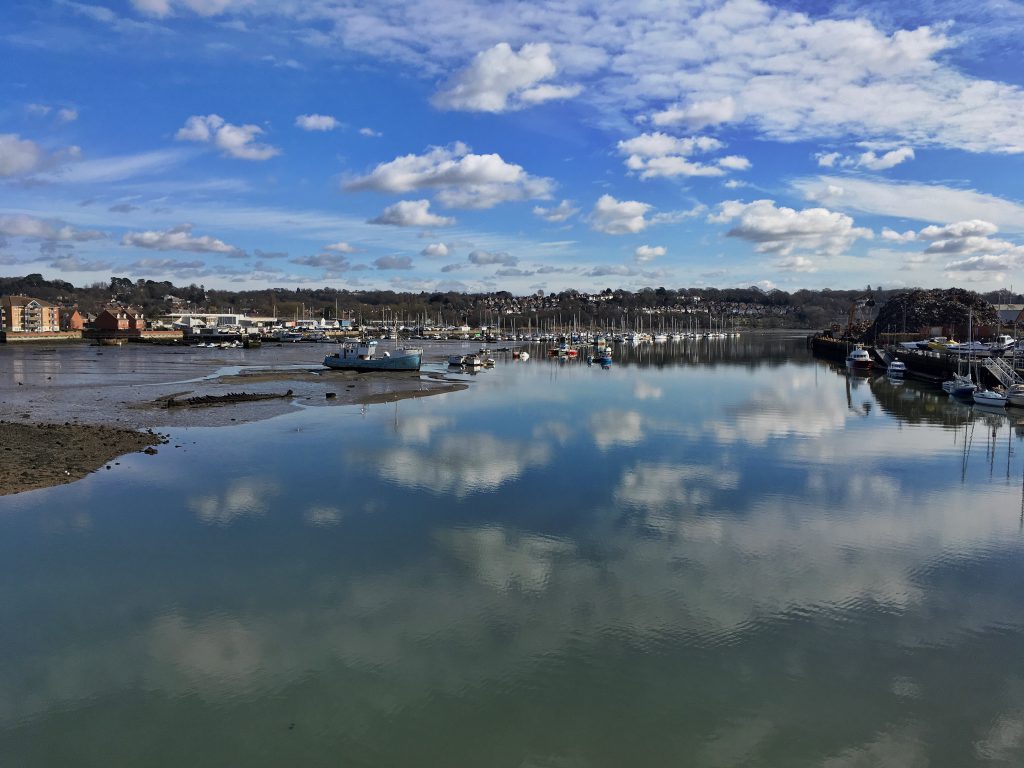 Today I had an errand to run. It involved a walk to the top end of town and, while I was there, I thought I’d have a wander round the parks. After my recent search for signs of spring at Millers Pond I was fairly sure they weren’t going to be exactly bursting with flowers but a walk in the parks is always a welcome thing, flowers or not. Besides, there were a few F.G.O. Stuart postcards from the area to recreate.

Armed with the fancy camera and photos of the postcards on my phone, CJ and I set out across Northam Bridge. It was a glorious day, a complete contrast to our last grey damp walk. The sun was shining, the sky was blue, speckled with a few cotton wool clouds. When we reached the river it looked as if they were floating in the still water too. By the time we’d reached the far side of the bridge my light coat had been ripped off and was in my bag. This time last week I needed the Arctic coat, a flappy eared hat, gloves and a scarf, now it was just leggings, a thin tunic and a cardigan. What a difference a week makes!

The crocuses on the corner of New Road and Above Bar have cast off their shyness and burst open, revealing their bright gold stamens. We paused for a moment to admire them and take a photo or two, the first crocus of spring is a thing to celebrate after all. 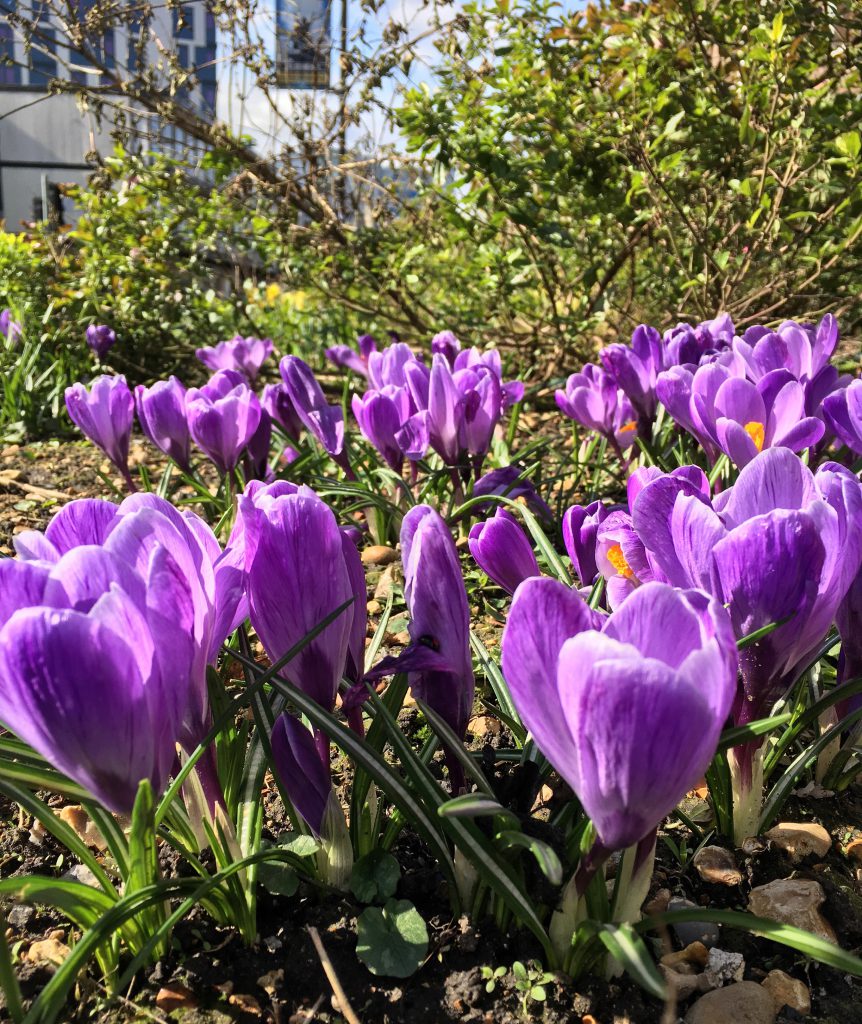 Once our errand was completed we headed straight for Andrews Park. With or without postcards, it was the perfect day for a walk in Southampton’s Central parks.  The five conjoined parks in the centre of the city cover almost fifty two acres. They began life as part of the town’s Lammas lands, medieval town fields cultivated for half of ever year then, from Lammas Day on 1 August, used for common grazing. Andrews Park, otherwise known as East Park, and Watts Park, or West Park, were East and West Magdalens, lands granted to the leper Hospital of St Mary Magdalene and known as Marlands. 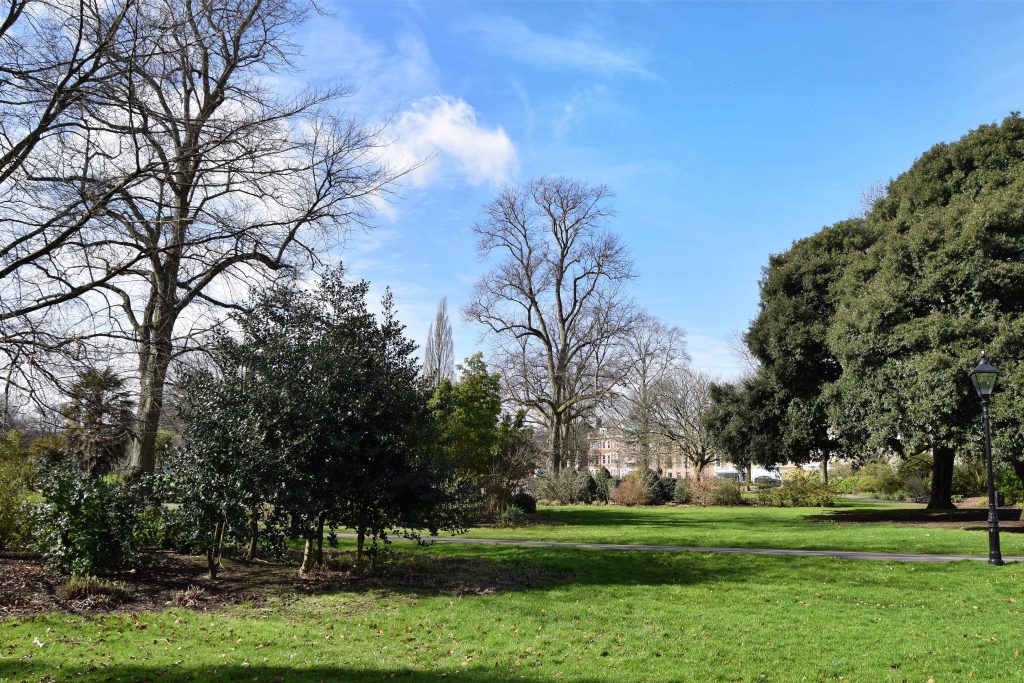 In the 1840’s and 1850’s the old Lammas lands were turned into parks. They were planted with trees and shrubs, possibly influenced by botanist and garden designer JC Loudon who was commissioned by the council to design the Old Cemetery on the Common. The layout remains essential unchanged to this day although the planting is different and some improvements have been made. In theory, this should have made it fairly easy to find the spots where F.G.O. Stuart took his photographs. In fact, with the help of Google and a fair bit of local knowledge, I knew roughly where the first postcard photograph was taken. We headed straight for the north west corner, close to the site of the old aviary. 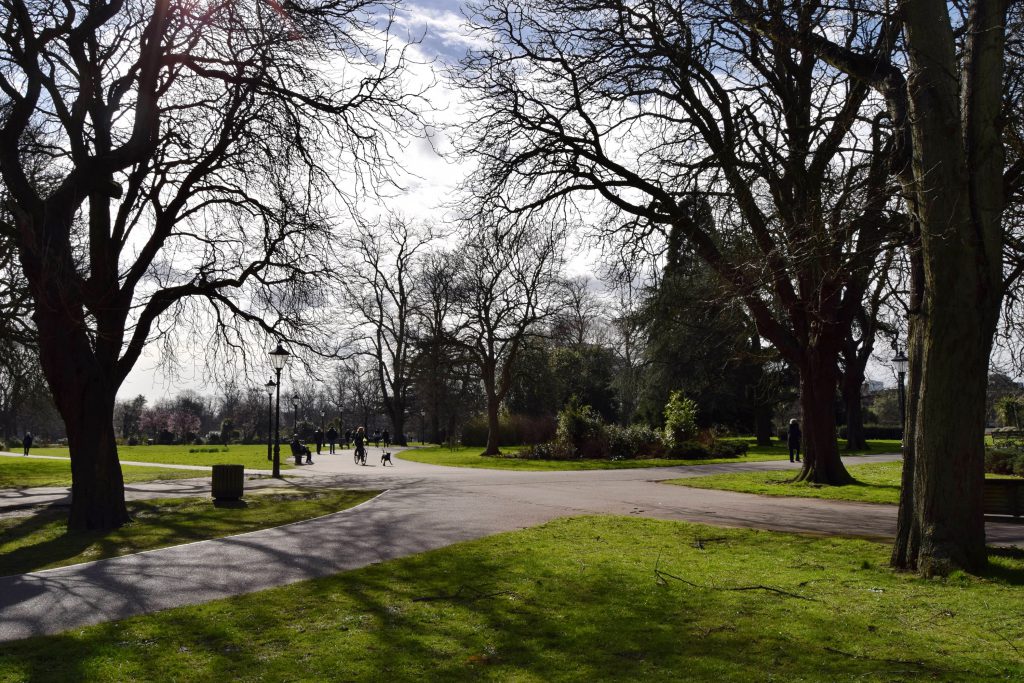 Daffodils were brightening the grass under a large tree beside the circular path and we stopped for a while to admire them before trying to get our bearings. The circular path was a feature in the first of our postcards for the day so we knew we were in the right area but, in the postcard, there seemed to be a lot less trees. As the parks would have been relatively newly planted in Stuart’s day this was not really a surprise, but it didn’t help us any. 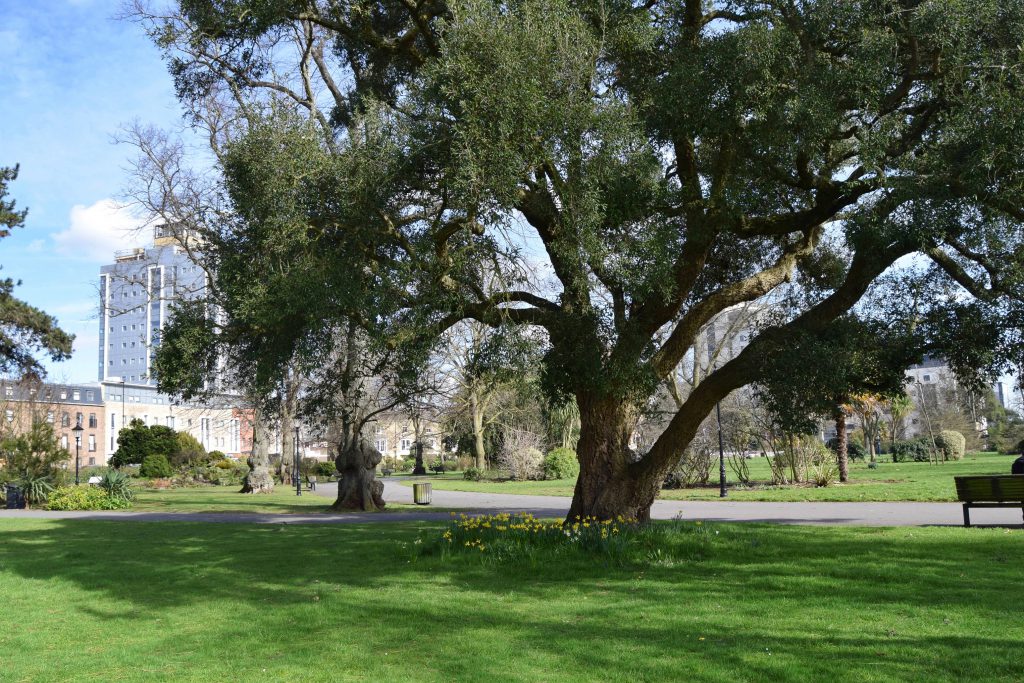 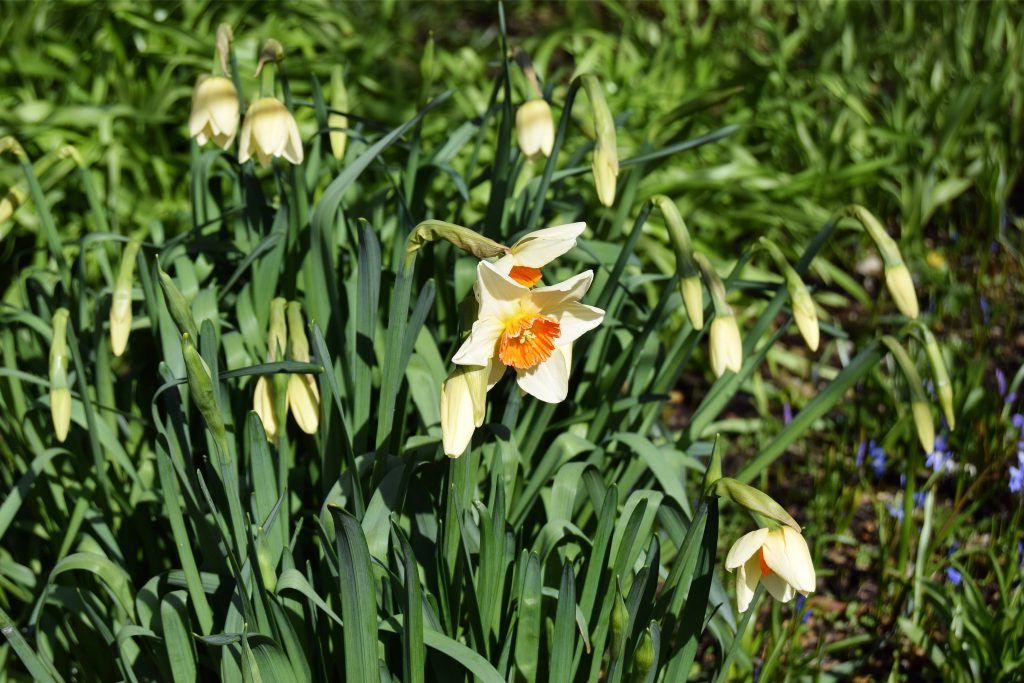 In the postcard a church spire is visible above the tree line on the far side of the park. Before we left home I’d done a little research and discovered this was the spire of St Andrew’s Presbyterian Church, founded in 1853. If the church had still been standing our job would have been simple. Unfortunately, by the 1970’s it was in need of expensive repairs and the congregation had dwindled away so it was demolished. The spot where it stood, on the corner of Brunswick Place and Dorset Street is now an office block. Sadly it is not as tall as the church spire was and was almost invisible behind the trees. We did our best, using the circular path as our guide. As before, it was obvious Stuart must have had some kind of platform to put his camera on. The best I could do was stand on the wall at the edge of the park. 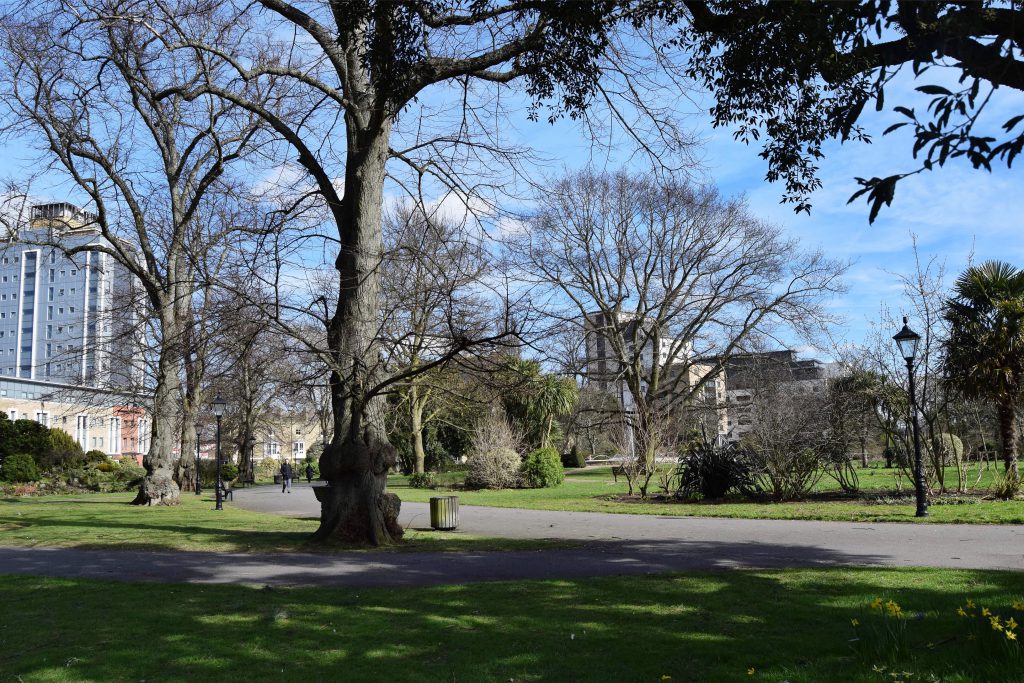 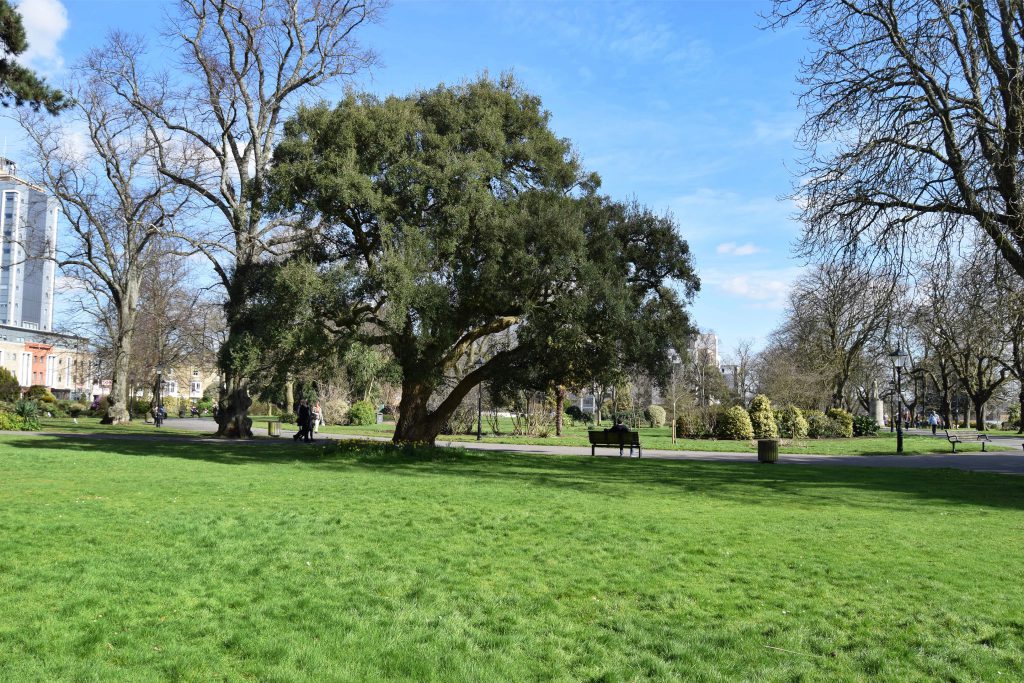 The photograph for the next postcard had been taken in the middle of the park and I was sure would be a little easier to recreate. We couldn’t leave without a quick visit to the lovely little 1930’s rock garden though. It wouldn’t be at it’s best this early in the season but I was sure there would be something blooming. 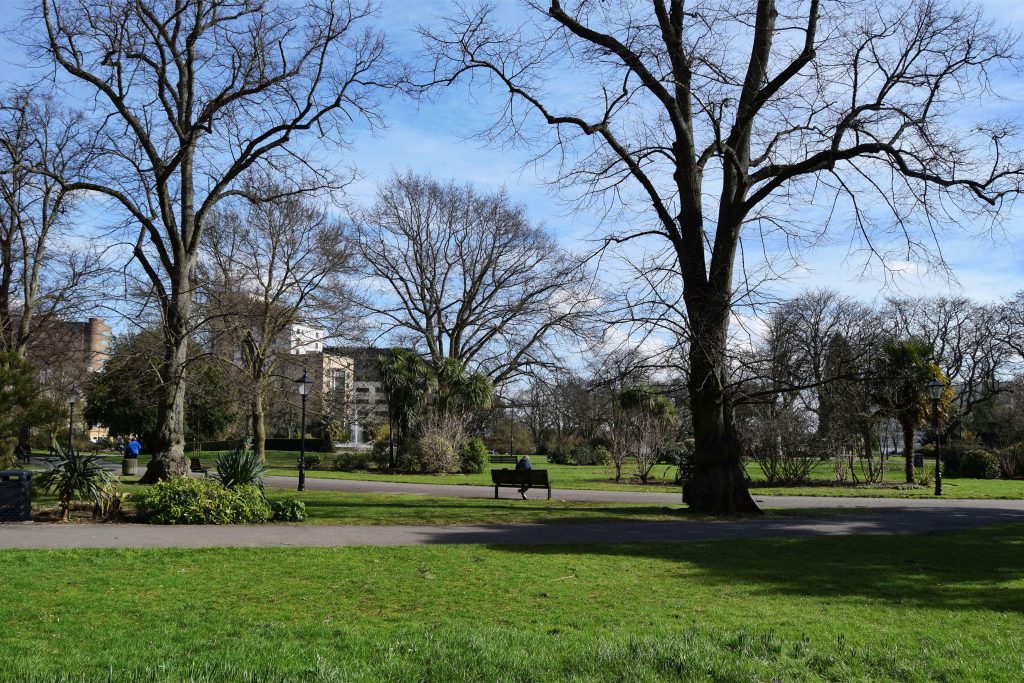 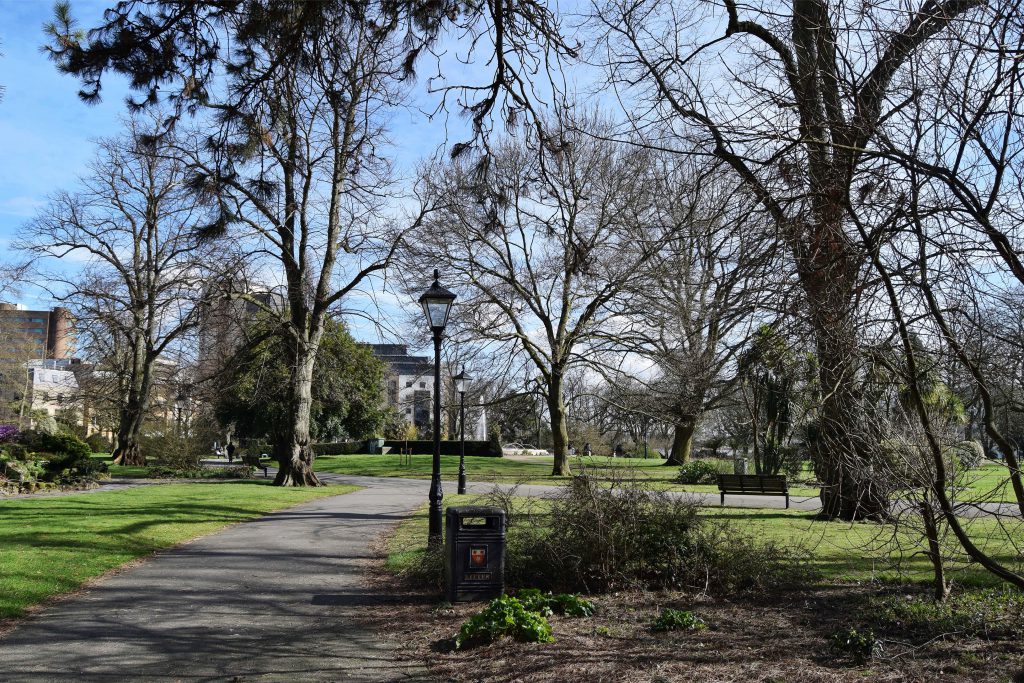 As it was, there was work going on in the garden and parts of it were cordoned off so we couldn’t walk along the winding path anyway. The detour was well worth it though. On the edge of the rockery the hellebores were flowering and, near the path where the barriers were, a small rhododendron was bursting with pink flowers. 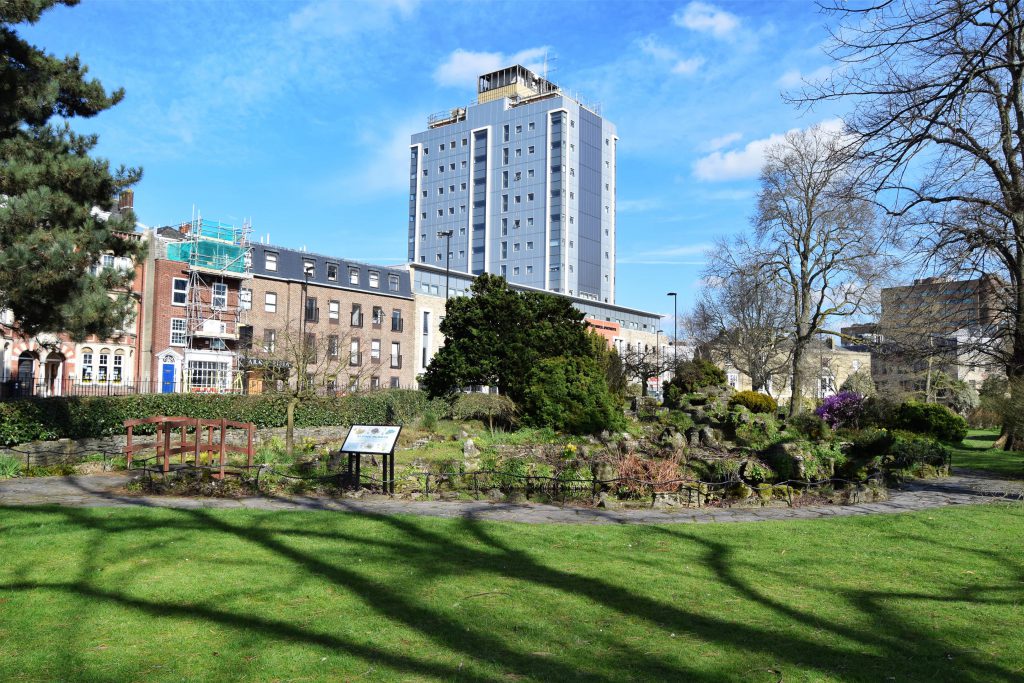 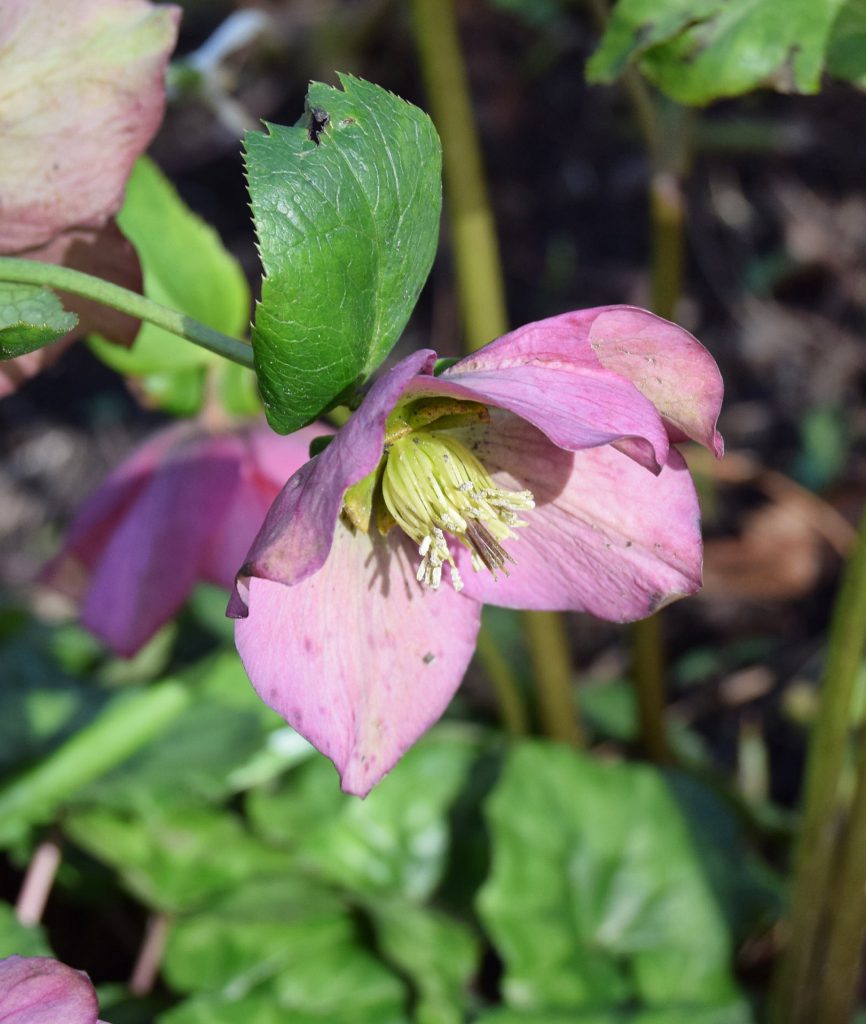 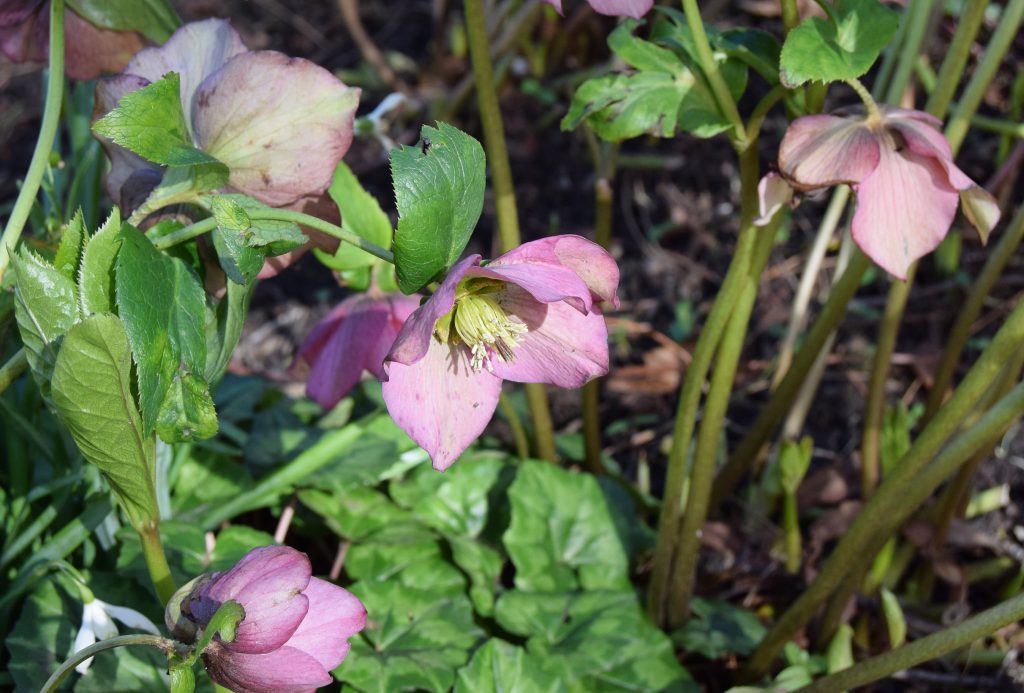 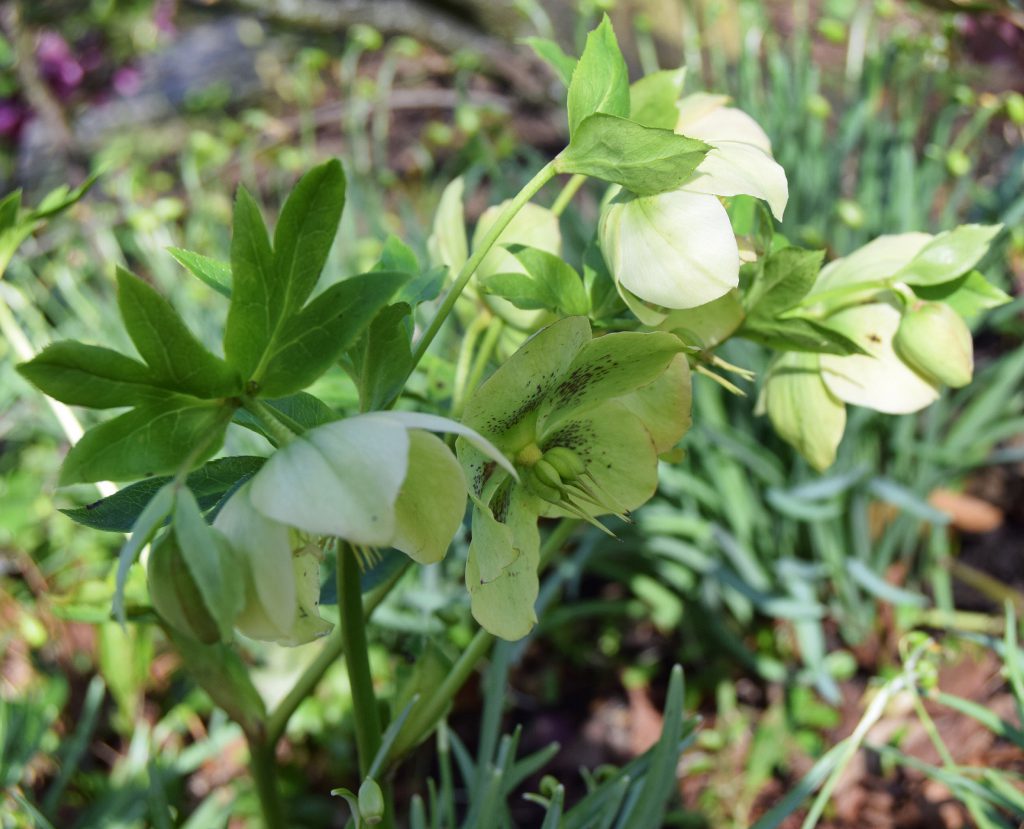 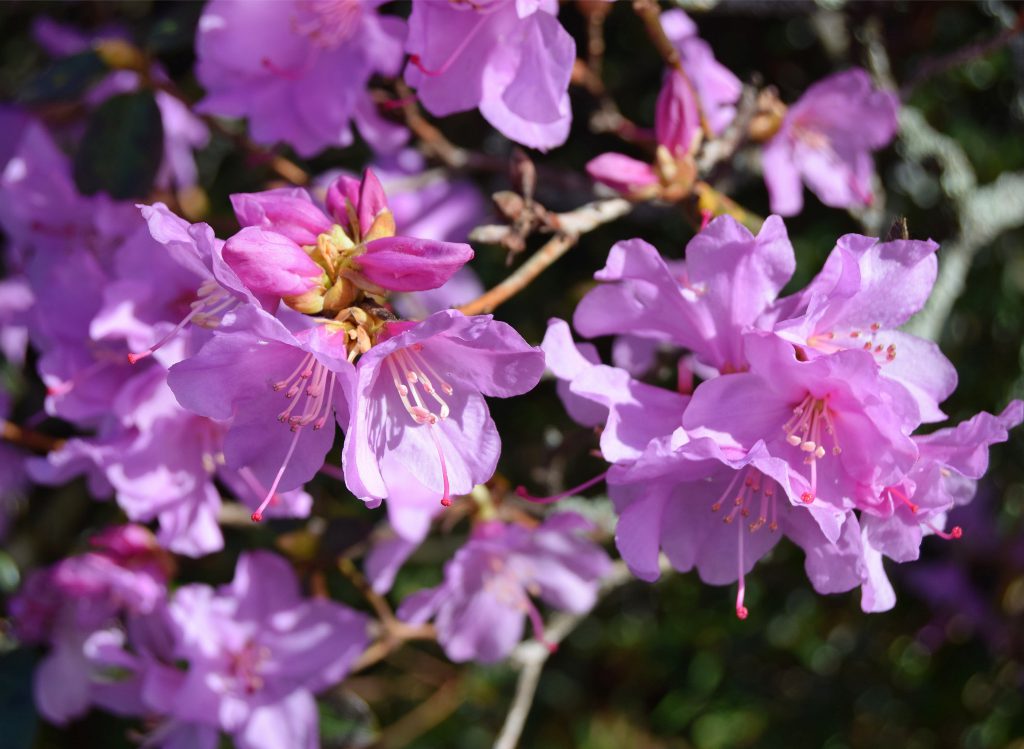 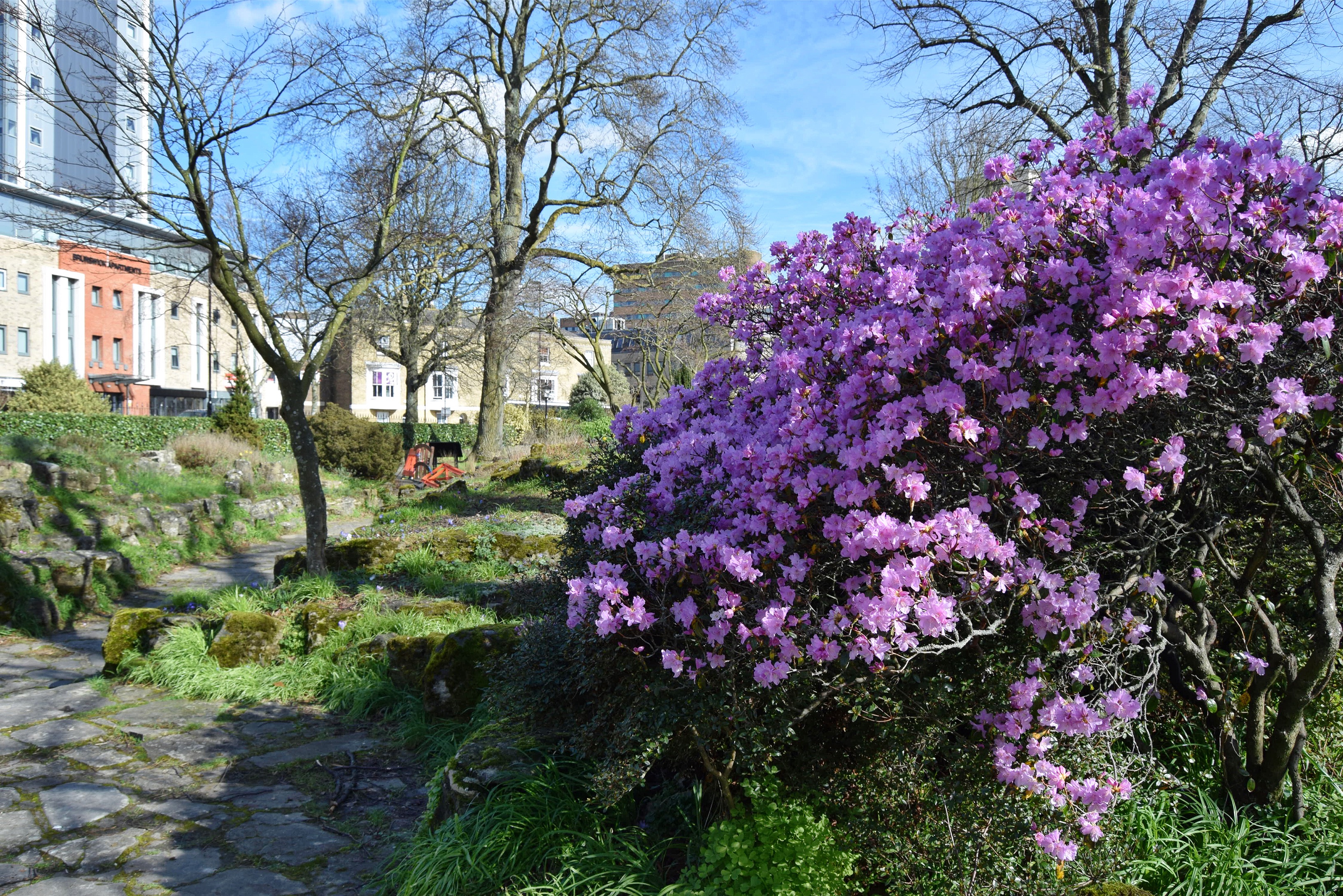 Another bonus to our detour was the Queen’s Peace Fountain, installed in 2001 as part of the Southampton Millennium Project, to celebrate fifty six years of peace under Queen Elizabeth’s reign. If there is anything better than tinkling jets of water on a warm spring day I’m not sure what it is. 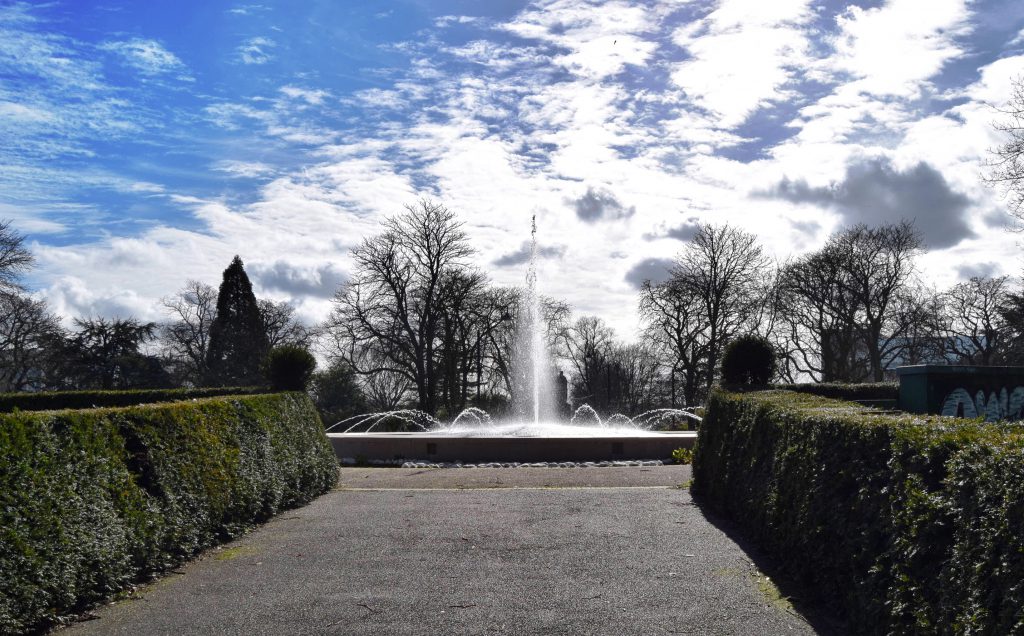 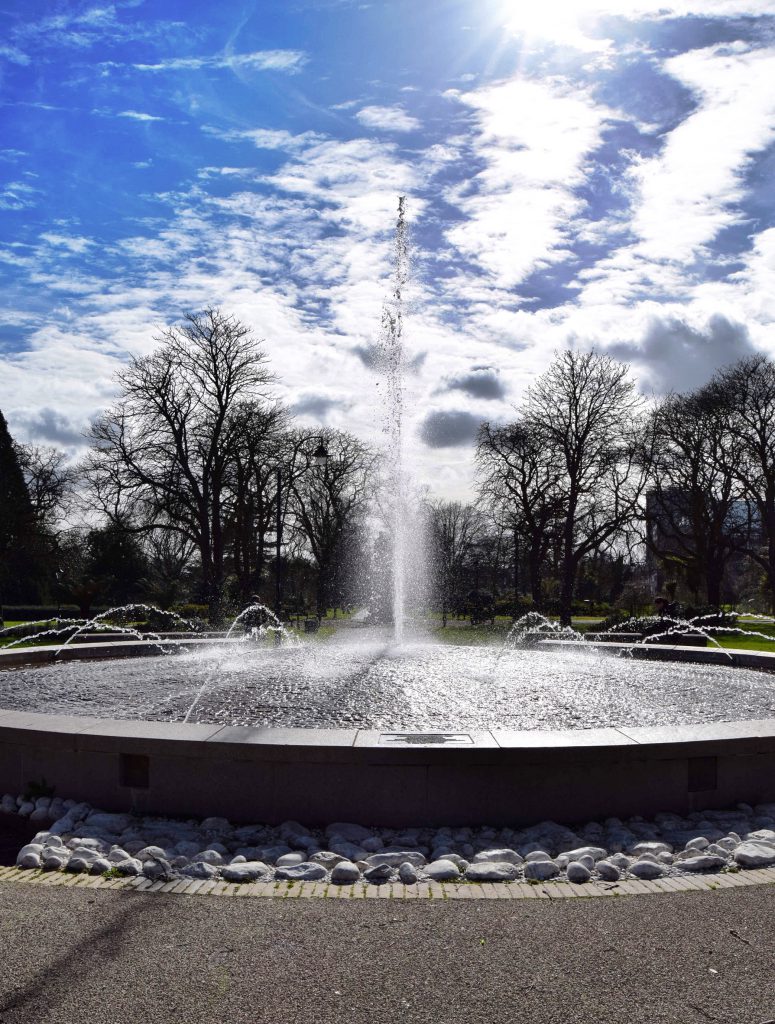 The fountain is directly in line with the subject of our next photograph, the statue of Richard Andrews, the man who gave his name to the park. Andrews was born at Bishop’s Sutton in 1798, the son of a wheelwright. His beginnings were humble. He worked as a farm hand and a sawyer at Itchenstoke. Later he was apprenticed to coachbuilder Mr Beaumont, as a hammer man. At twenty one, with his apprenticeship completed and a new wife to support, he came to Southampton in search of better employment prospects. He found work with coachbuilder William Jones and saved as much money as he could to start his own business. In 1832 he started a coach building business which soon gained an impressive reputation. 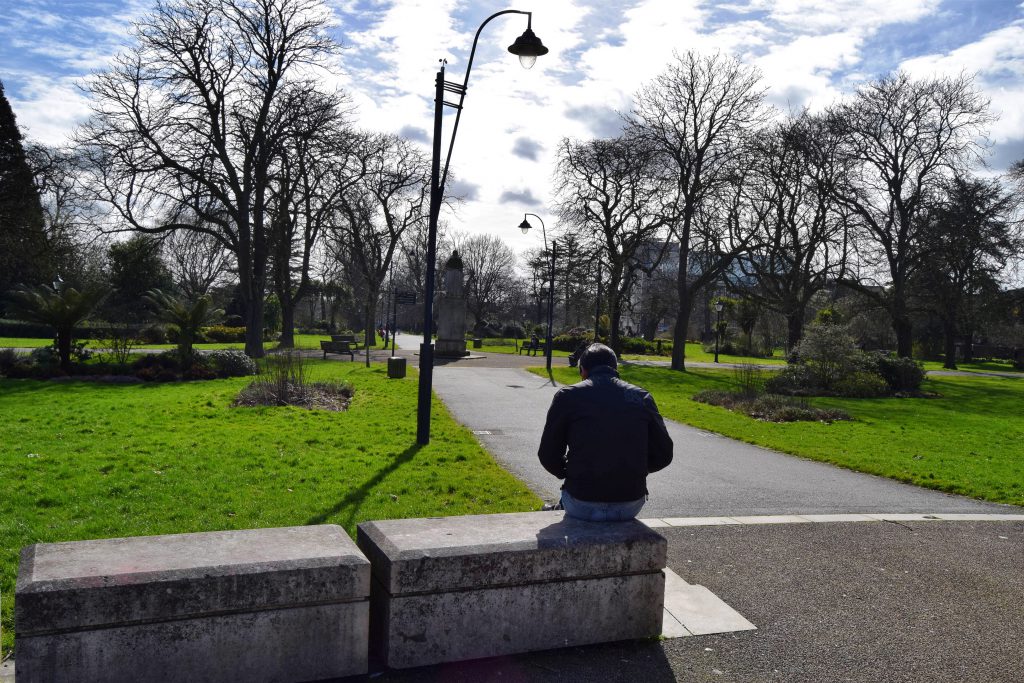 Despite refusing to align himself with the rich Tories of the town who threatened to ruin him if he went against them, his business went from strength to strength. Soon he was a rich man himself, employing more than two hundred men. His rags to riches story earned him the nickname Southampton’s Dick Whittington. By all accounts he was a kind and considerate employer and was also active as a local Liberal politician. Five times he was elected mayor of the town and he died in 1859 a rich and popular man. The very next year a statue was erected in his honour and four thousand people came to watch the first stone being laid. 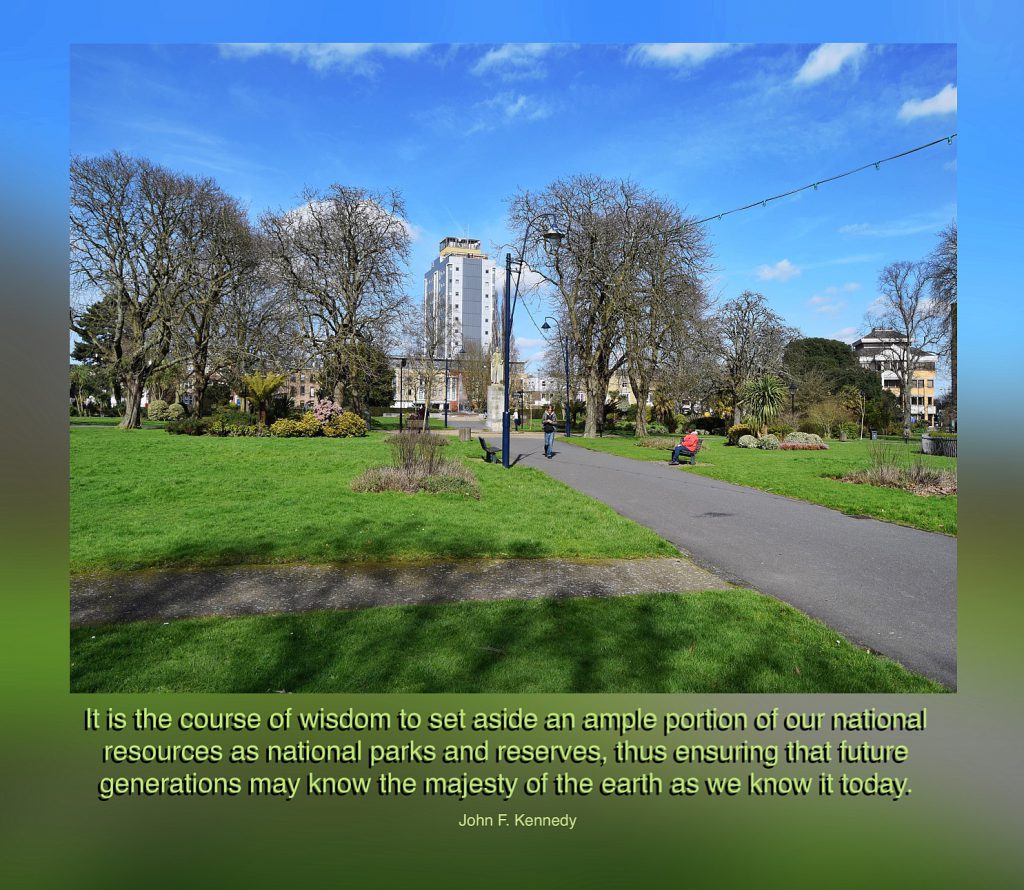 It took me a while to work out which direction Stuart had been facing when he took his postcard photo. The size of the phone screen made it difficult to see the statue clearly and the image itself is not as crisp as a modern day photograph. Eventually, by squinting at the statue itself and the phone screen I could tell the photograph had been taken from the front side of the statue so I set off along the main path to try to find the right angle. 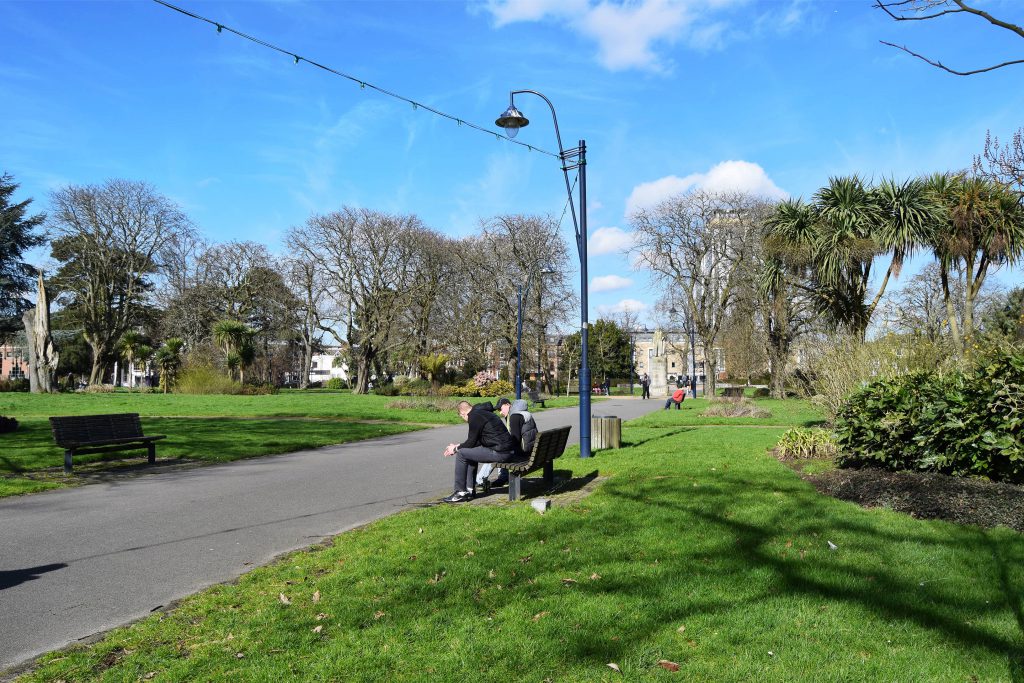 Once again it was obvious Stuart must have had some kind of platform to stand his camera on. The statue itself is not in exactly the same position either. When Stuart took his photograph it was relatively new and the pedestal it stood on was far more ornate than the replacement built in 1971. Even so, I think I did a fairly good job with my reconstruction. 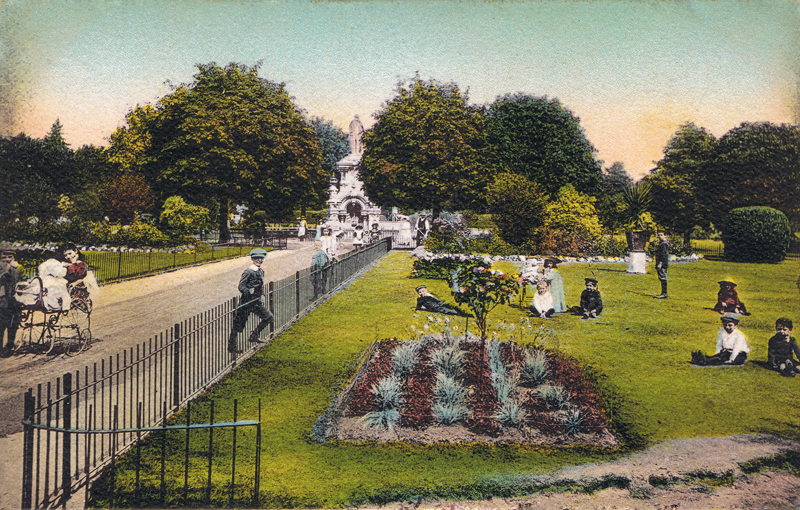 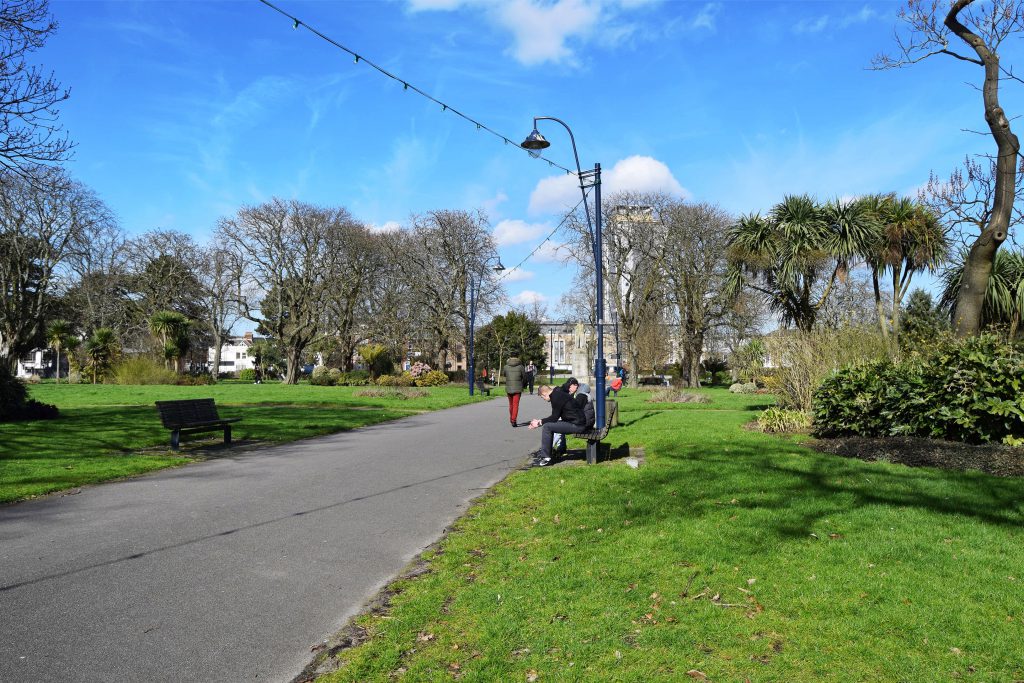 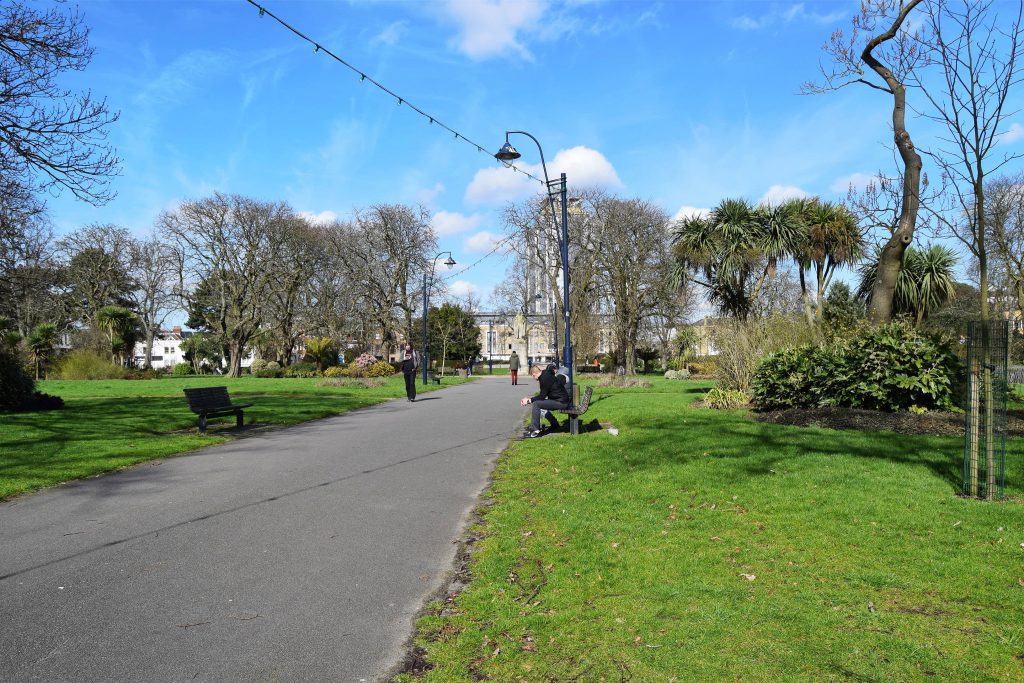 One thing that really stood out about these last photographs was how little the park has really changed. The details may be different, the railings have gone, the statue pedestal has been replaced and the flowerbeds have moved about but the essence of the park is the same, right down to the number of people wandering about using it. Thankfully, there is no danger of any drastic change in the future either. In October 2013 Southampton’s wonderful Central Parks were awarded Grade II listed status on the English Heritage Register of Parks and Gardens of special historic interest. This listing affords protection against any development in or outside the parks that would impact on them. The people of Southampton should be forever grateful for this.
Please see my copyright information before you copy or use any of the above words or pictures.

12 thoughts on “Postcards from Andrews Park”