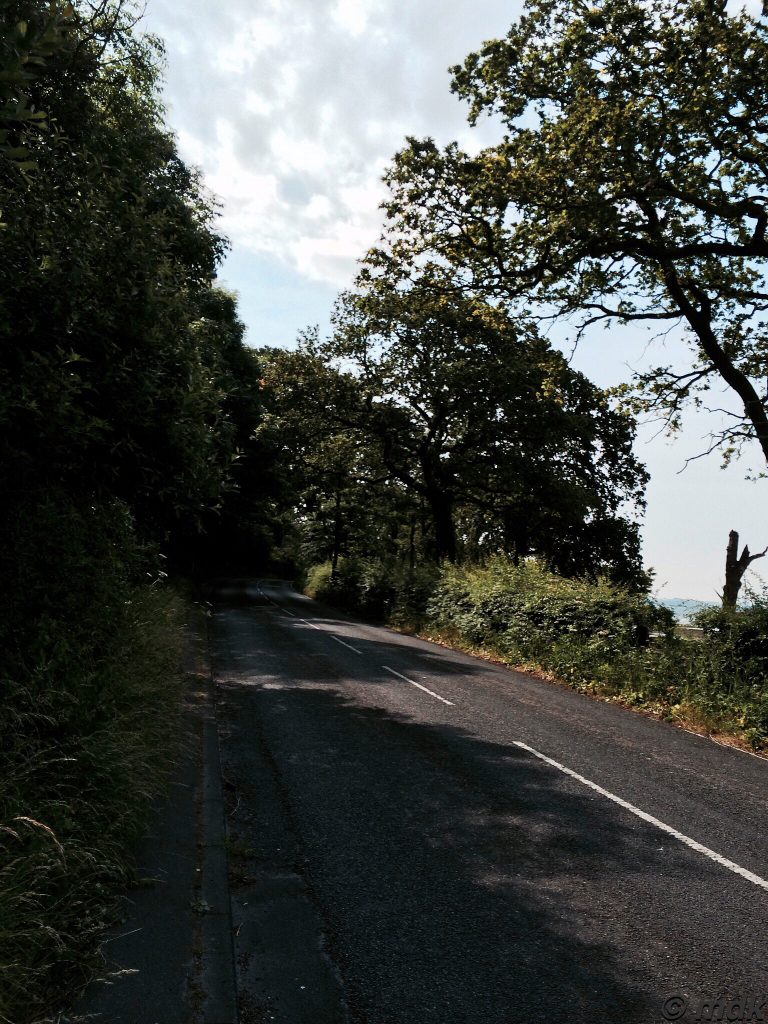 The plan for the midsummer Sunday walk in June 2014 was to head down to Netley and have a go at the Hamble Rail Trail. Earlier in the year I’d stumbled on part of it but, as I was lost at the time and a long way from home, I decided not to follow it. Ever since I’d been meaning to go back and explore it further. The main problem was I couldn’t find any decent maps that an expert in getting lost like me could rely on. Armed with what I could find, I set off to Weston Shore.

I set off for my rail trail adventure early. When I say early, it was after nine but, for a Sunday, that’s not bad going. Even then it was hot and the breeze blowing in from Southampton Water was welcome. All my walks seem to involve lots of small decisions, no matter how well I plan them and the first of these came when I reached the end of the promenade. Did I keep to the shore path as I usually do or walk the road route up Abbey Hill?

Because I’ve taken the shore path so many times recently, I decided to choose the latter. This turned out to be one of my better decisions, although, with the hill and the heat, it didn’t seem like that at first. The trees screening the road from the water also blocked the cool breeze and the higher I climbed the hotter I got. There’d been a half plan to snap some photos of Netley Abbey as I passed but, when I reached the boundary hedge it was obvious that thick summer growth meant there wasn’t even the slightest hint of it to be seen. 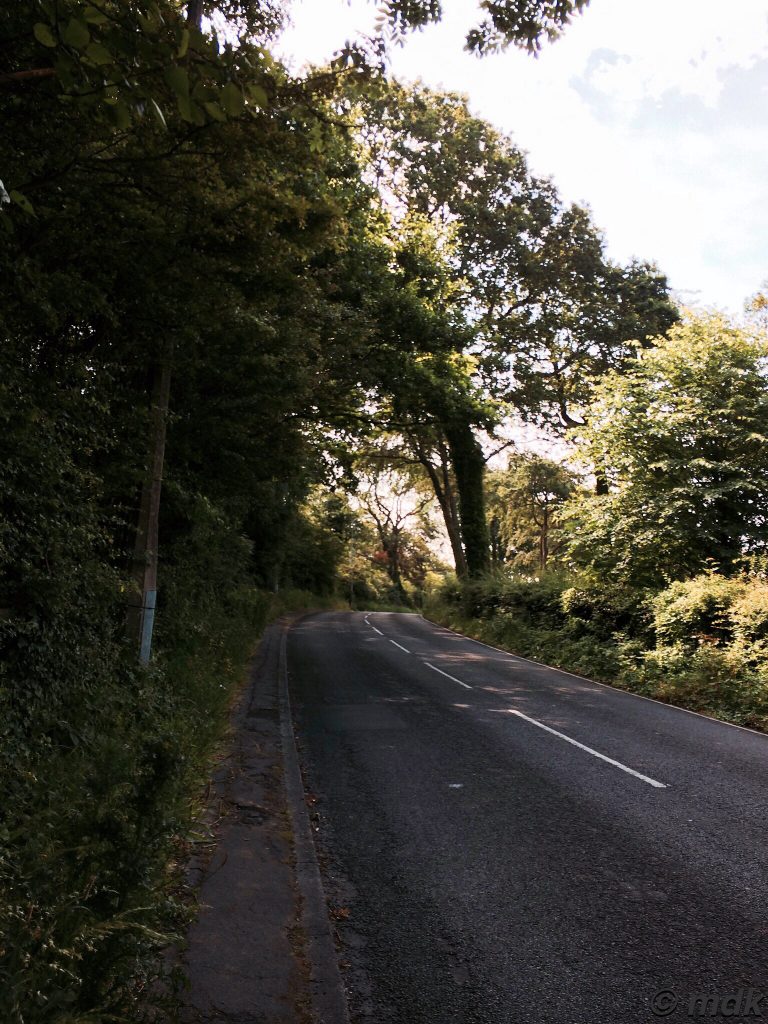 Just as I was cursing yet another poor decision, I reached the gate. It was open! Every time I’ve come this way the gate has been shut. From what I can make out the Abbey had become a bit of a magnet for mischievous youths and there were fears the crumbling walls would be damaged by their evening antics so it was closed to the public. Unbeknown to me the gates are open during the summer months, presumably only during daylight hours. Time for another decision then. Should I take the opportunity to go in, adding time to an already long walk, or risk the abbey being closed next time I come this way? 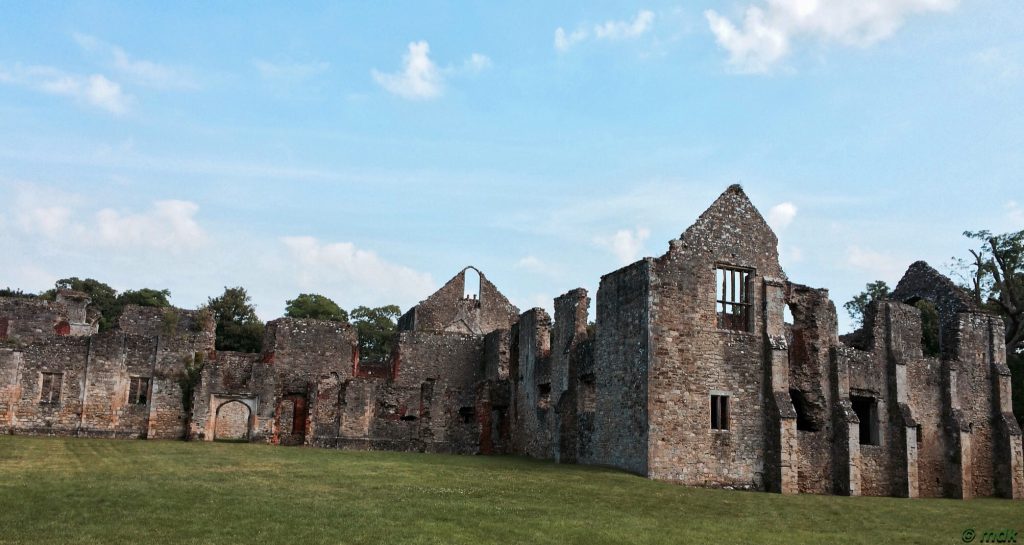 As there was absolutely no one else about I decided on the former. It really was too good an opportunity to miss. For those who don’t know, Netely Abbey is one of the best preserved Cistercian monasteries in Southern England. It was founded in 1239 by Peter des Roches, then the Bishop of Winchester. The bishop had a plan to build two abbeys which would be his memorial, one in Netley and one in La Clarté-Dieu, Saint-Paterne-Racan, France. He started buying land in 1236 but died in 1238, before the building was completed. His executors did finish the job but, when the first Cistercian Monks arrived from neighbouring Beaulieu Abbey, money was running out and little work had been done.

So I strolled across the grass, half expecting someone to come and ask me what I thought I was doing. Despite living so close to it, I’ve never actually visited the abbey before and, as with so many things, it wasn’t quite as I expected. For a start there were a lot of dark red bricks amongst the stonework. This seemed a little odd for a thirteenth century building even if they were obviously very old, but more of those later. Slightly puzzled I walked through the first arched doorway into what must once have been a large room with doors and windows leading off in all directions. 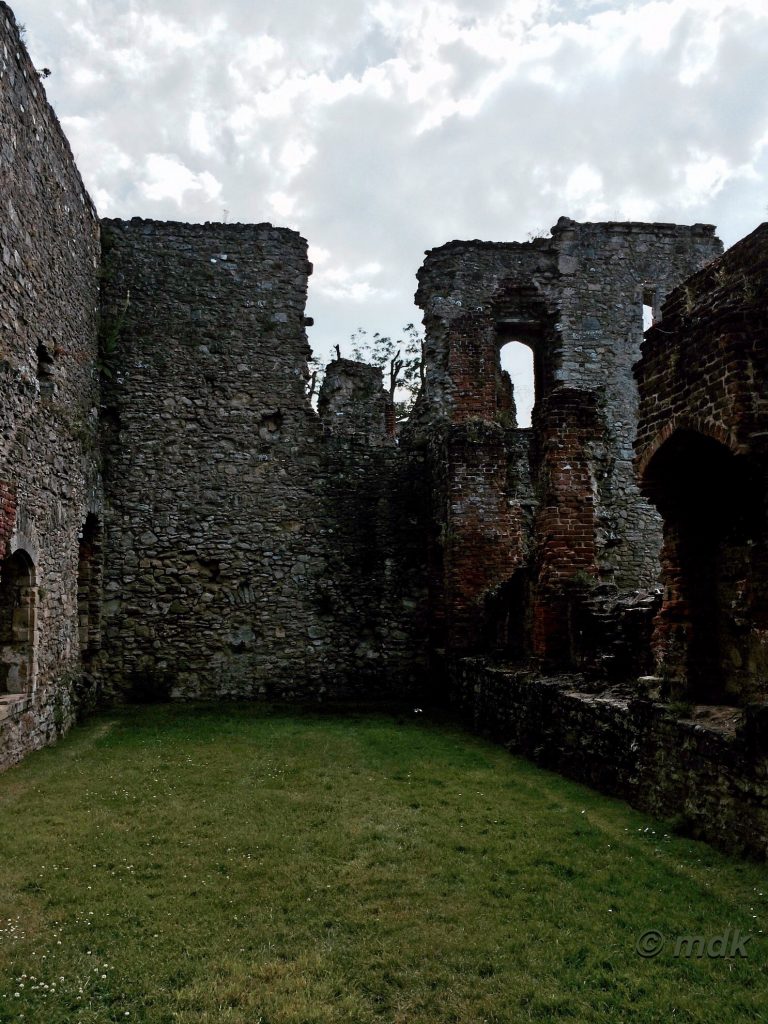 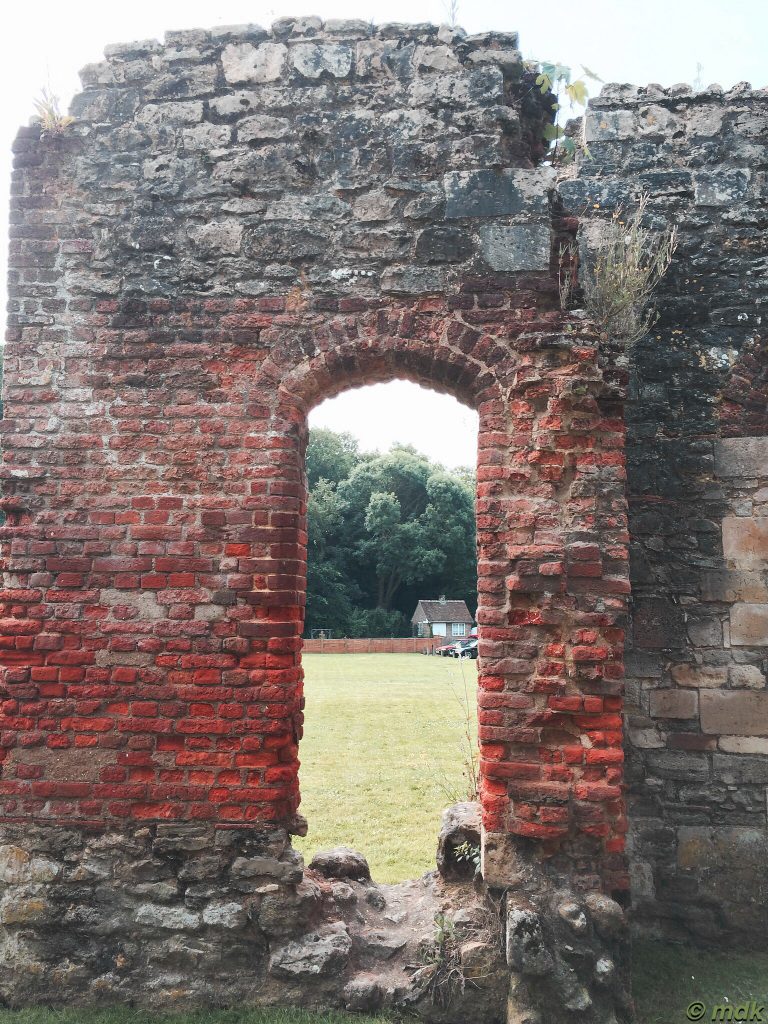 The abbey was finally finished when Henry III got involved and became the patron in 1251. Quite what the monks did in the years it took to complete is a mystery, I guess they must have got used to living in a building site. Presumably they weren’t as lost as I felt, the place was like a maze. What I could really have done with was a detailed map as I wandered around, not wanting to miss anything but not exactly sure where the windows and doors I saw led.

Through the next arch I found myself in a large grassy area. This was the cloister where the monks spent most of their time in silence, studying, copying books and painstakingly making beautiful illuminated manuscripts. There was the occasional sign giving me a clue what I was looking at. One told me the row of four small arches in front of me was a laver and had once contained sinks. This was where the monks washed. Three large arches led from the cloister into the chapter house. Here the monks listened to a daily reading of a chapter of the Rule of St Benedict while the abbot sat on a throne. At the end of their lives, monks were also buried in the chapter house. Once there was a second floor and, above the chapter house was the monk’s dormitory. Although it is long gone, you can still see where the roof abutted against the church today. 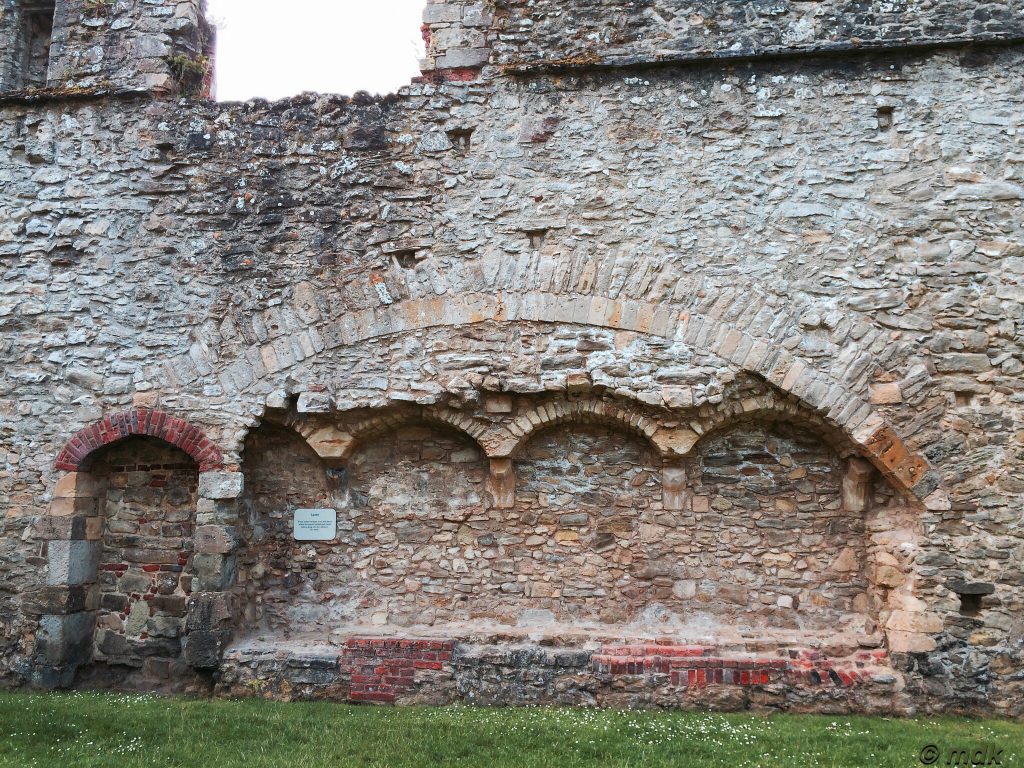 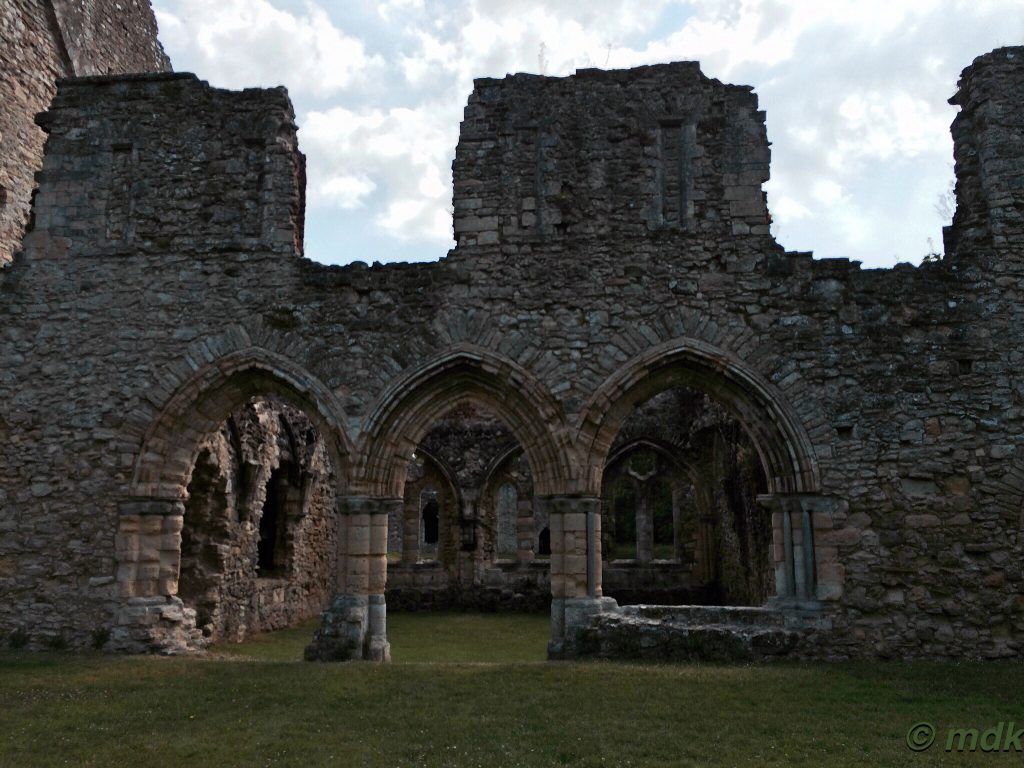 Another little door caught my interest and I wandered over to take a closer look. This was one of the few buildings that still had a roof and, as I stepped inside I gasped at the beautiful vaulted ceiling. A sign told me this was the sacristy and book store. Once it was separated into two rooms by a partition. In one half clothing and precious object were stored while the other half was used as a book store. 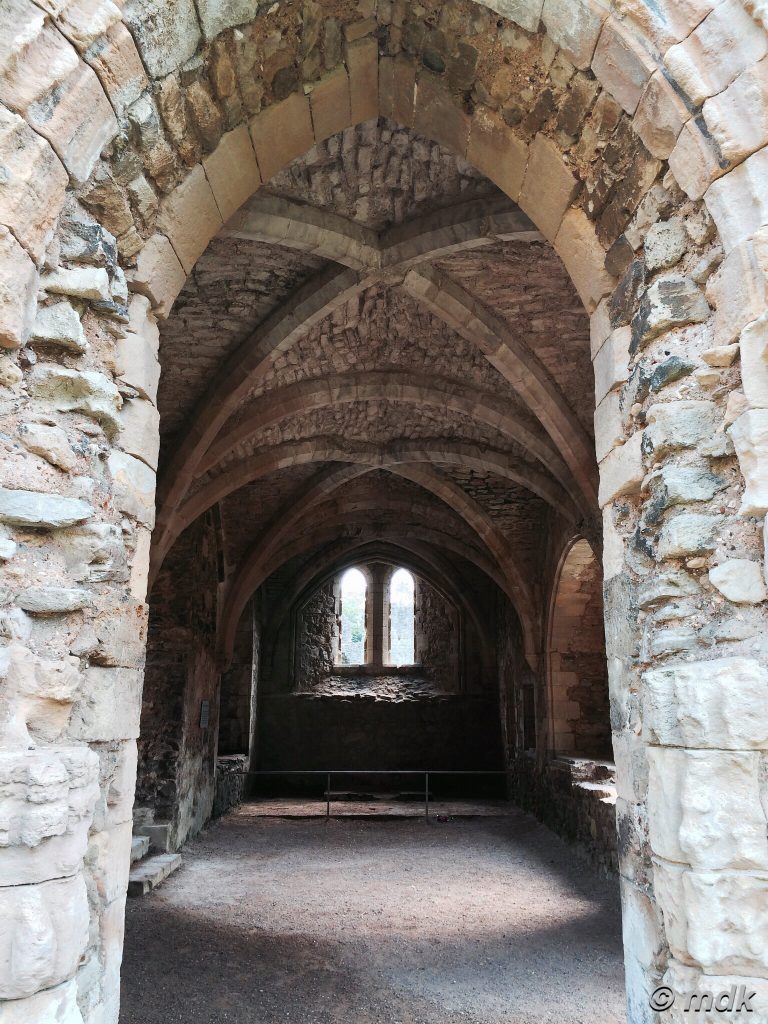 At the far end I could see trees through a small window but a metal pole, presumably a modern day addition to stop people walking on what remains of the decorative encaustic floor tiles, stopped me getting any closer. Decorative recesses in the walls made me wonder if this was where the books were stored. Disappointingly there was a fair bit of graffiti scratched into the stone although the dates on some told me this was not a modern day occurrence and some looked as if it might have been carved by the monks themselves. 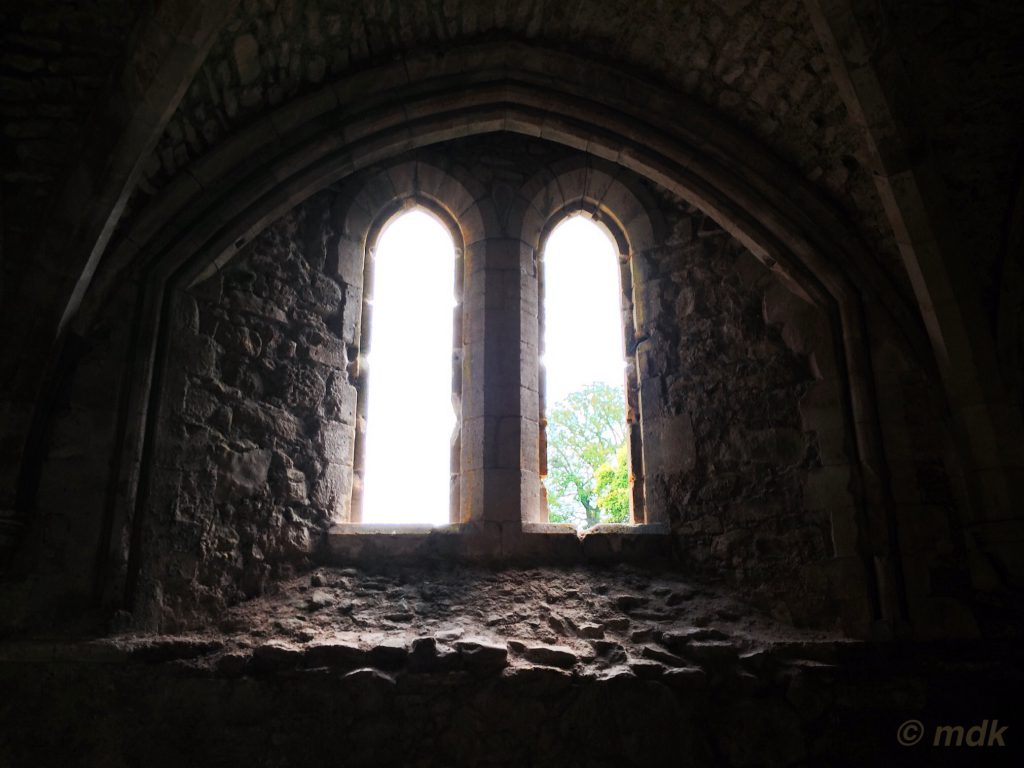 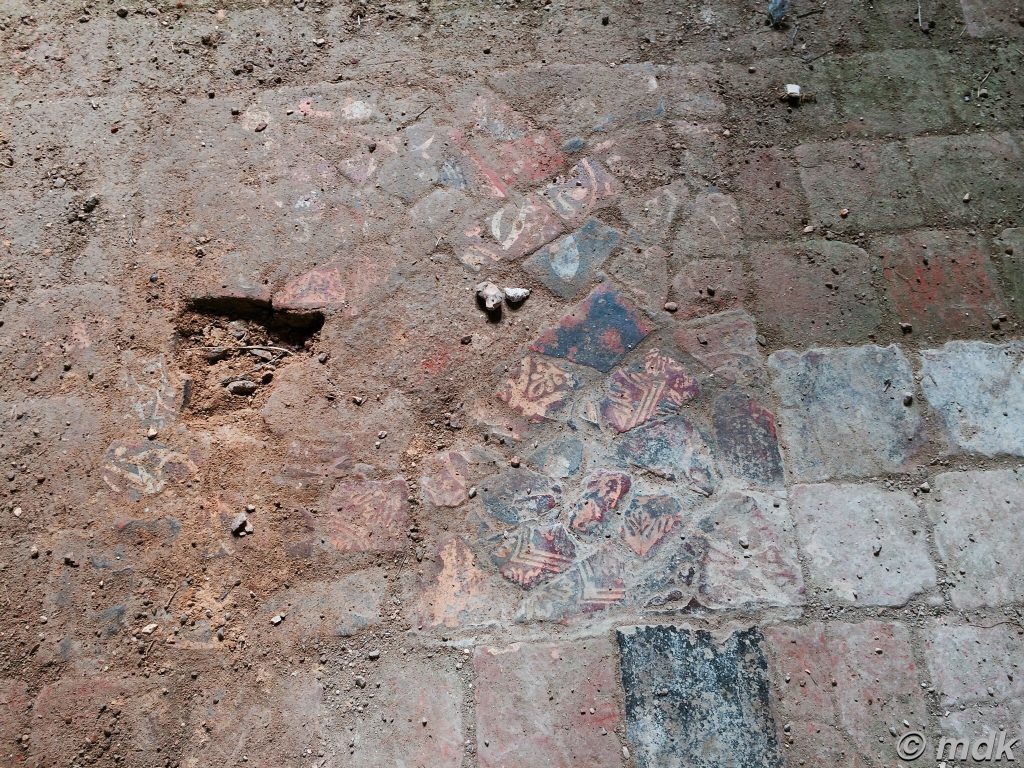 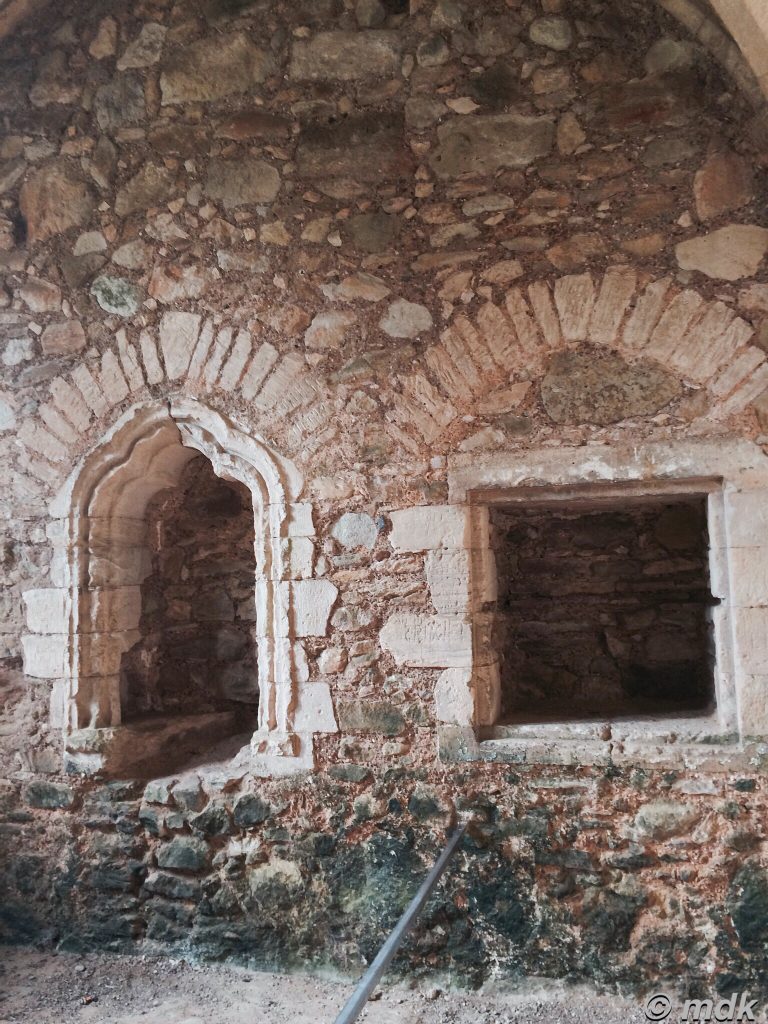 Next I had a look at the church. Cruciform and built in the gothic style a foundation stone was inscribed “H. DI. GRA REX ANGE” (Latin for Henry by the Grace of God King of the English). The only word I could still see was Ange, meaning English. In its day it must have been a sight to behold. Apparently it would have been plastered and painted in white and maroon with lines and geometric patterns. The many beautiful arched windows would have been filled with glass painted with biblical scenes and the floor multicoloured heraldic tiles. The central building housed a low bell tower, the arch of which still survives. I wonder what happened to the bells? These days the only decoration comes from the ferns, lichen and plants that have colonised many of the crevices. While I was looking at them I stumbled upon an odd little barred door. Peeping through I could see stairs and I think this may have been where the monks entered the church from their quarters above. For a moment I could almost imagine a stream of berobed figures slowly descending, hands clasped in prayer. Time was getting on so, reluctantly, I left the church. Even though I knew I should be making a move if I wanted any chance of making it to the rail trail I couldn’t help standing for a while looking back at the ruins. Legend has it that, in around 1700, Sir Berkeley Lucy came into possession of the abbey and decided to demolish it and sell the stones for building materials. He employed the services of local builder Mr Walter Taylor, asking him to start by demolishing the church.

Although Walter was happy to have the work he confided in a friend (the father of hymn writer Issac Watts) that he had a terrible dream that had him wondering if he’d done the right thing. In the dream he was pulling down one of the large arched windows and one of the stones fell from the arch and killed him. His friend told him this was surely a sign that he should walk away from the job. Unfortunately for Mr Taylor, he didn’t heed his friend’s advice and he’d hardly started when the arch of one of the windows did in fact fall. It fractured his skull and he died of the injury. Work on the demolition stopped. Knowing the story I found myself looking up at all the windows wondering which one had dealt the fatal blow. Really I should have been on my way but, as I turned from the church I noticed another building standing a little way off. Should I just have a little peek or leave it for another day?