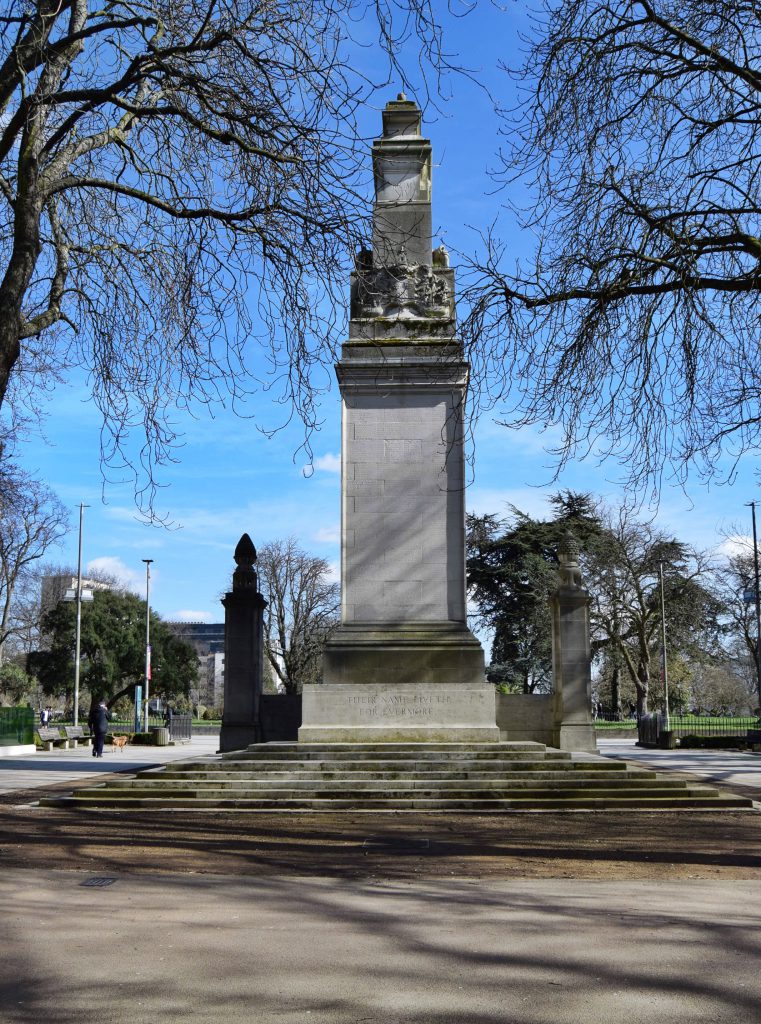 The day seemed to be getting warmer and warmer and, even though I’d taken my coat off and stuffed it in my bag near the start of our walk, I was overheating. After yomping into town, running an errand and wandering all over Andrews Park taking photographs, CJ and I were in need of a coffee. We both agreed to head for Artisan Coffee in Guildhall Square. Maybe we’d even have a cake.

We crossed the road by the Cenotaph,  constructed to Edwin Lutyens’ design on the edge of West Park in 1920. Of course, as most of F.G.O Stuart’s postcards were shot in the very early 1900’s, it didn’t feature in any, but two of his photographs were taken in the park, just behind the Cenotaph. We were so close it seemed silly not to go and at least have a look.

West Park is also known as Watts Park after the monument to Isaac Watts standing in the centre of a large flower bed behind the Cenotaph. To Sotonians, Isaac Watts needs no introduction. He is probably one of the city’s most famous sons. An author, educator, philosopher and writer of hymns, he was born in 1674 and lived in French Street. His hymn Our God, Our Help in Ages Past rings from the Civic Centre clock tower twice a day. 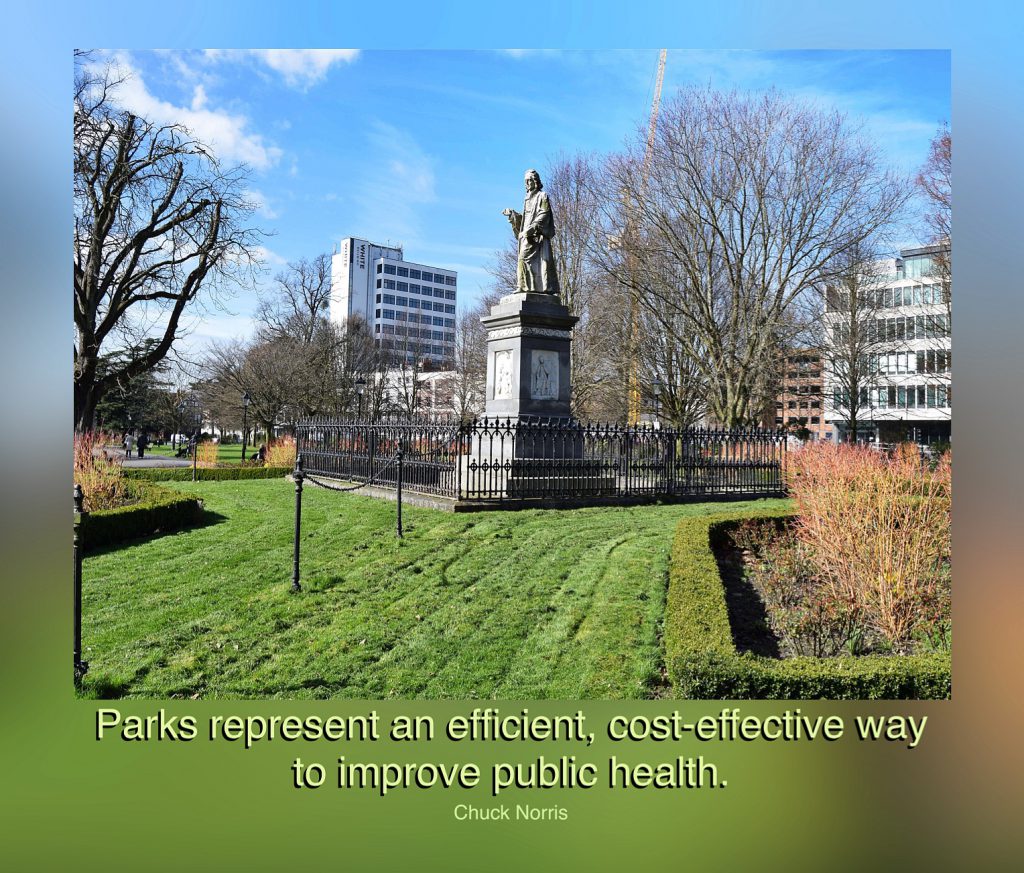 Watts’ beginnings, in French Street, were inauspicious to say the least. When he was born his father was in prison due to his Nonconformist views. Eventually he was freed but young Isaac admired his father’s courage in refusing to embrace the Church of England and grew up to be a Nonconformist himself. He was also something of a child prodigy, learning Latin at the age of four and going on to learn Greek, French and Hebrew. He refused offers by weathly neighbours to sponsor him for a place at Oxford or Cambridge and, instead, studied at a Nonconformist academy.

The first of F.G.O Stuart’s postcards shows Watts statue standing in the centre of the round flower bed that remains to this day. The beds here are still much as they were although the planting of box and colourful dogwood is more contemporary. It was a simple enough matter to find the spot where Stuart had stood to take his photograph but, even with CJ taking the camera and raising it above his head to take the second shot, we couldn’t get the same angle.
“I think we will have to start carrying a big box around with us if we want to capture the right perspective for these reconstructions,” I said.
“Maybe we could get a lightweight folding ladder,” he laughed.
“Only if you carry it,” I said. “I’d love to know what Stuart used? Short of climbing a tree I can’t see how he got so high an angle.” 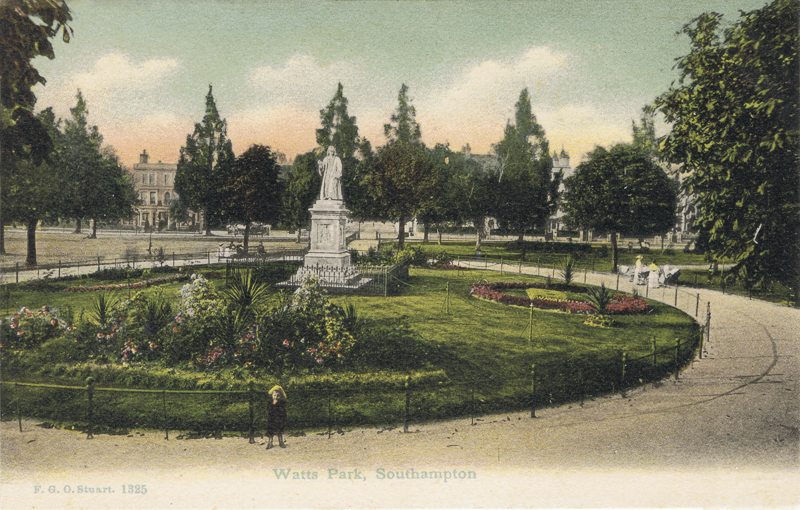 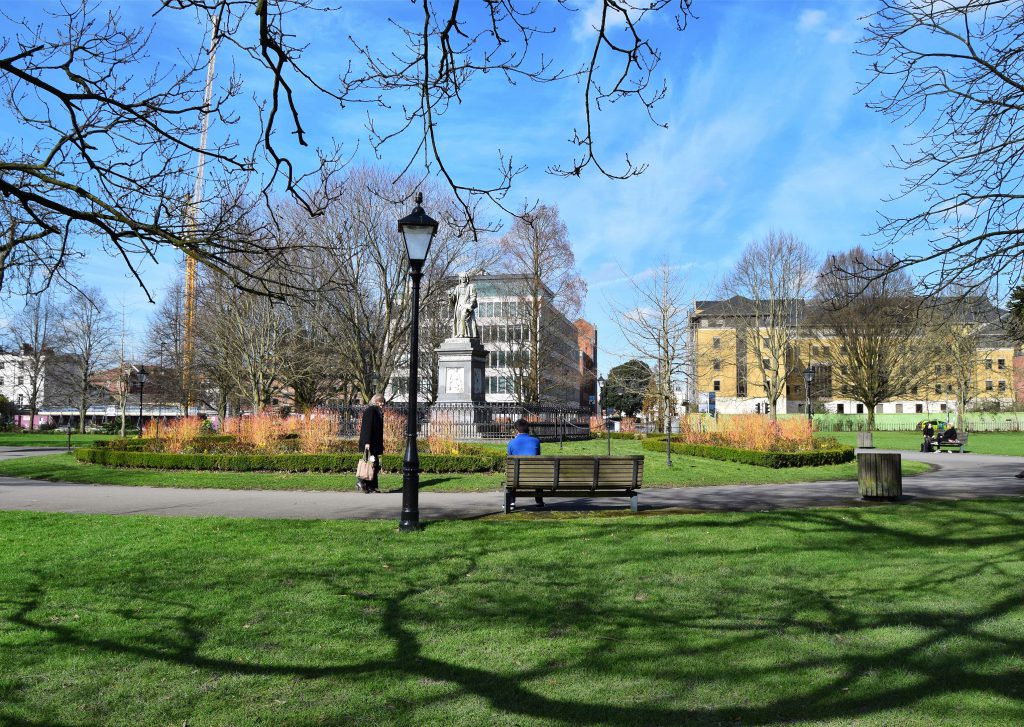 The biggest change between my photographs and Stuart’s were the buildings around the park. Stuart took his picture in summer when the leaves were in the trees but the wonderful buildings peeking from behind them have elegant pillars and porticoes. Today Cumberland Place is dominated by tall office blocks and very few of those classical buildings remain.

A second postcard of the same subject exists, this one a close up in black and white. This is almost certainly a much later photograph, probably taken after Stuart’s death in 1923. The family business passed to Stuart’s daughter, Flora, and her husband Charles Dowson and new photographs were added to the collection until the 1930’s. These later photographs were all in black and white or sepia, crisper than Stuart’s but not nearly as artistic. Who took them is a mystery. It may well have been Charles or even Flora. Even so, I decided to try to create my own version of this non Stuart, Stuart postcard. It is a fair recreation, especially when converted to black and white, but still the original seems to have been taken from a higher vantage point than I can manage. 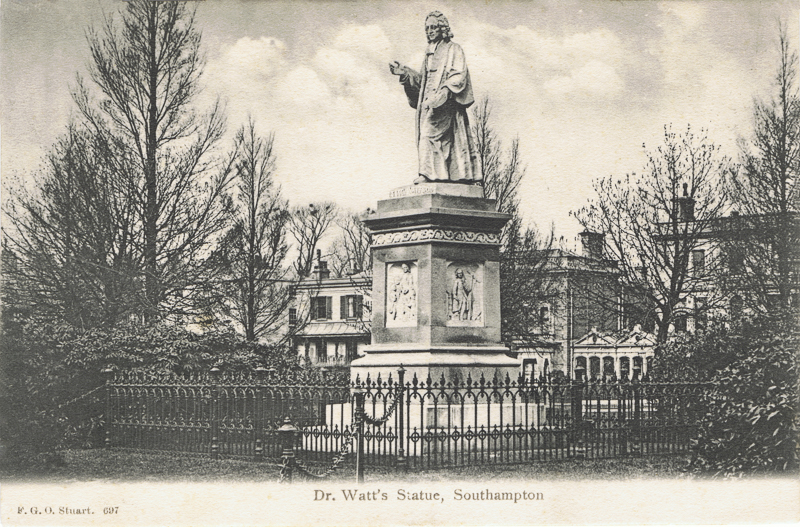 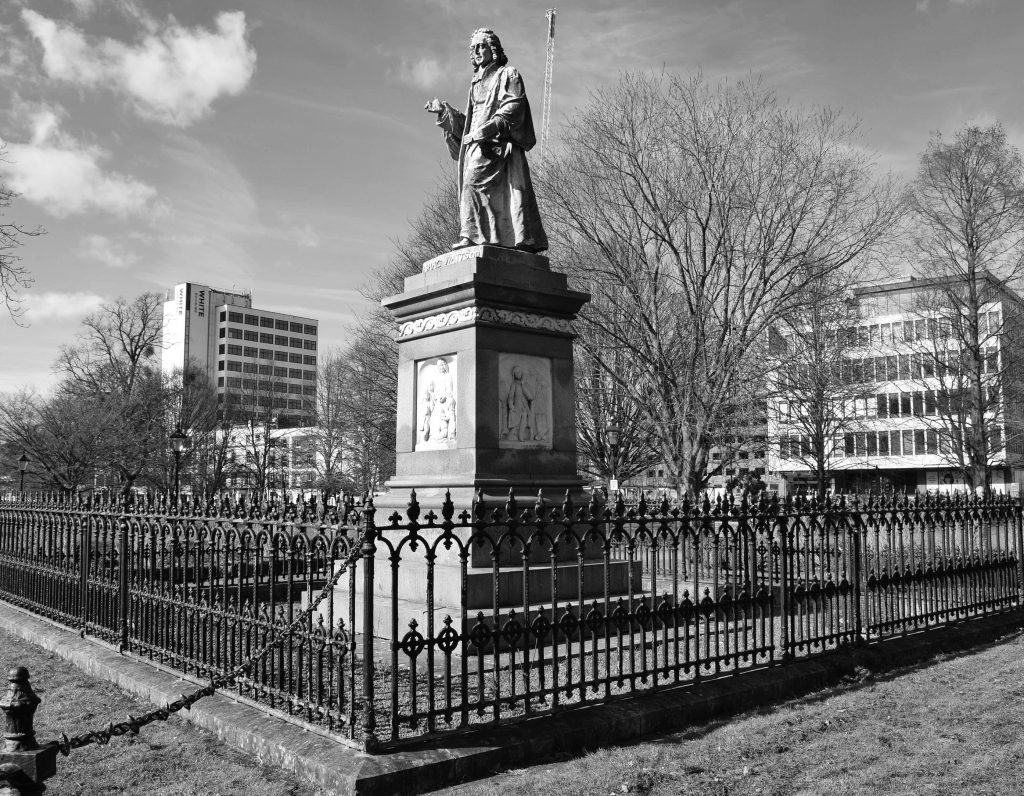 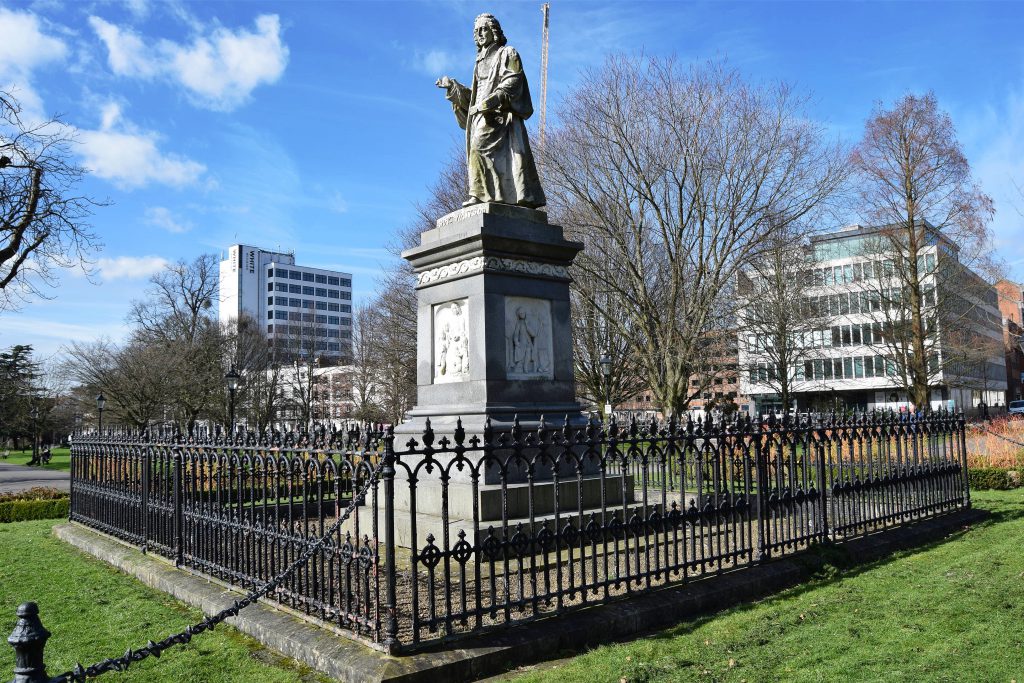 With both postcards recreated as best as we could manage, we said goodbye to the statue of Charles Watts, standing in the park in the voluminous robes he used to disguise his unusual looks. He may have had more than his share of brains but, physically, he was not blessed. He was short, just five foot, painfully thin and had a disproportionately large head. Lady Luck didn’t shine on him much either. Academically he may have been brilliant, he wrote dozens of theological treatises, essays on psychology, astronomy, and philosophy and a textbook on logic that served as a standard work for generations, but, in his late twenties, he began to suffer from a psychiatric illness. It would plague him for the rest of his days and it eventually caused him to resign from his post as pastor of Mark Lane Independent Chapel in London. Sir Thomas Abney, former mayor of London, invited him to convalesce at his estate in Stoke Newington. He spent the next thirty six years living there and died there in 1748, having never married.

Our next stop should have been Artisan Coffee but, to get there, we had to pass the site of one more Stuart postcard. Obviously, we stopped to take a photo or two. This final postcard of the day depicts Prospect Place, now Above Bar Street. The exact viewpoint was simple to find but the change in the buildings between then and now is drastic. In Stuart’s photograph a tram is going along the street so I was almost pleased to capture a bus, the modern day equivalent, in mine. I was not quite so pleased by the green barriers around the roadworks but, as CJ remarked, they make it a true representation of modern day Southampton. 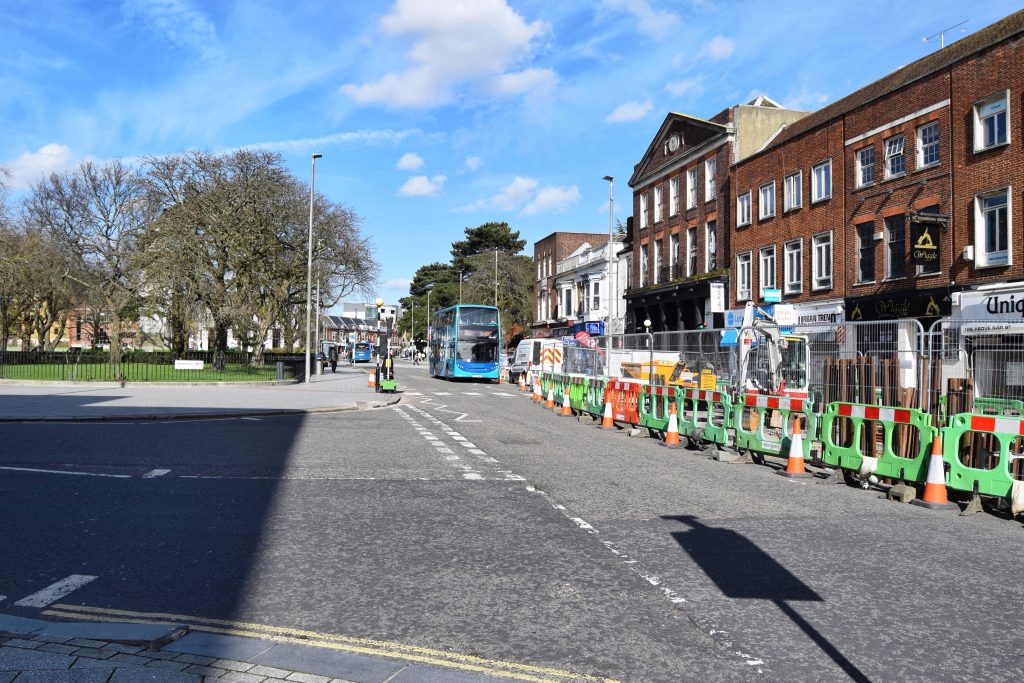 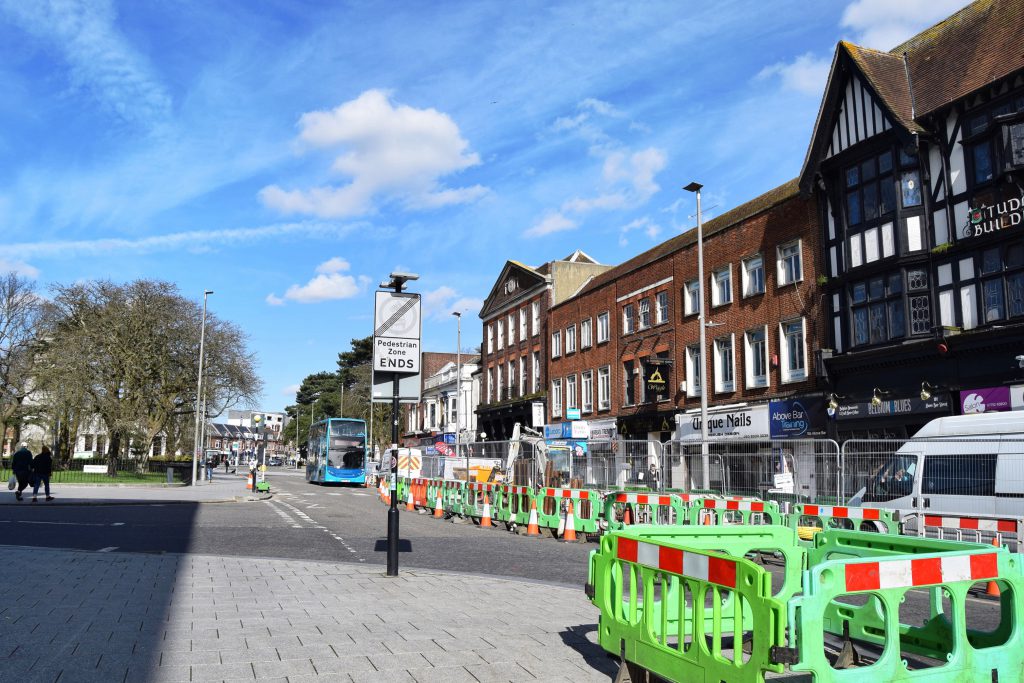 Finally, we got our much needed coffee and, to thank CJ for his patience, I bought cakes as well. It was such a beautiful day we’d planned on sitting at the tables outside the coffee shop but everyone else had the same idea and there was no room for us. 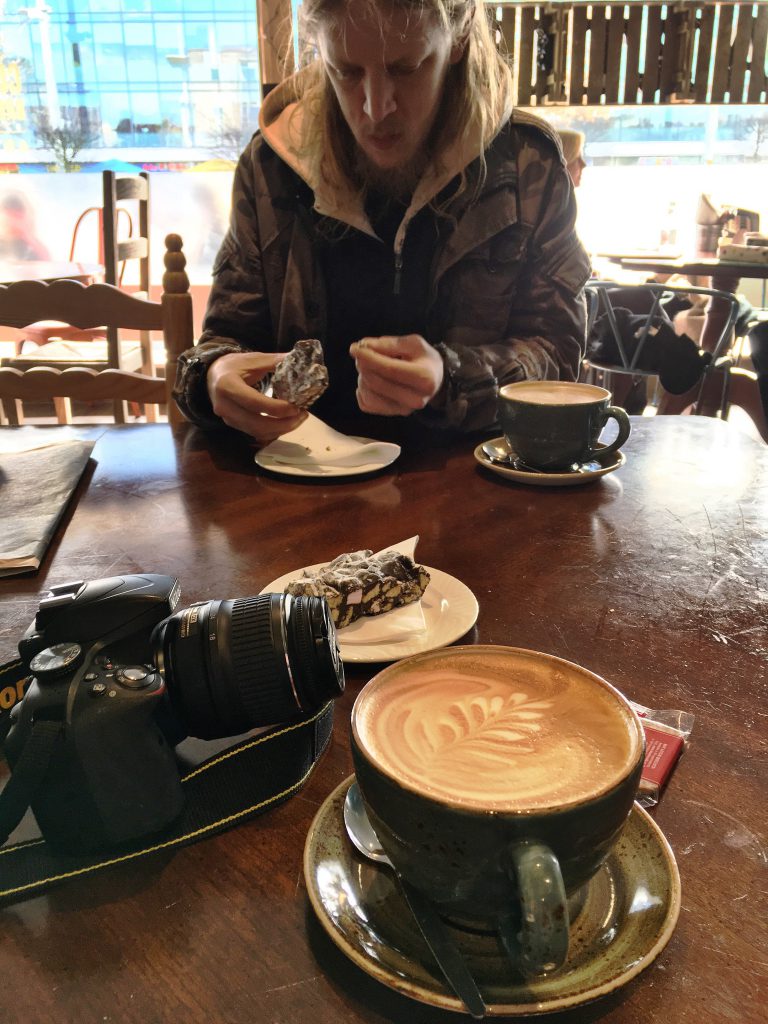 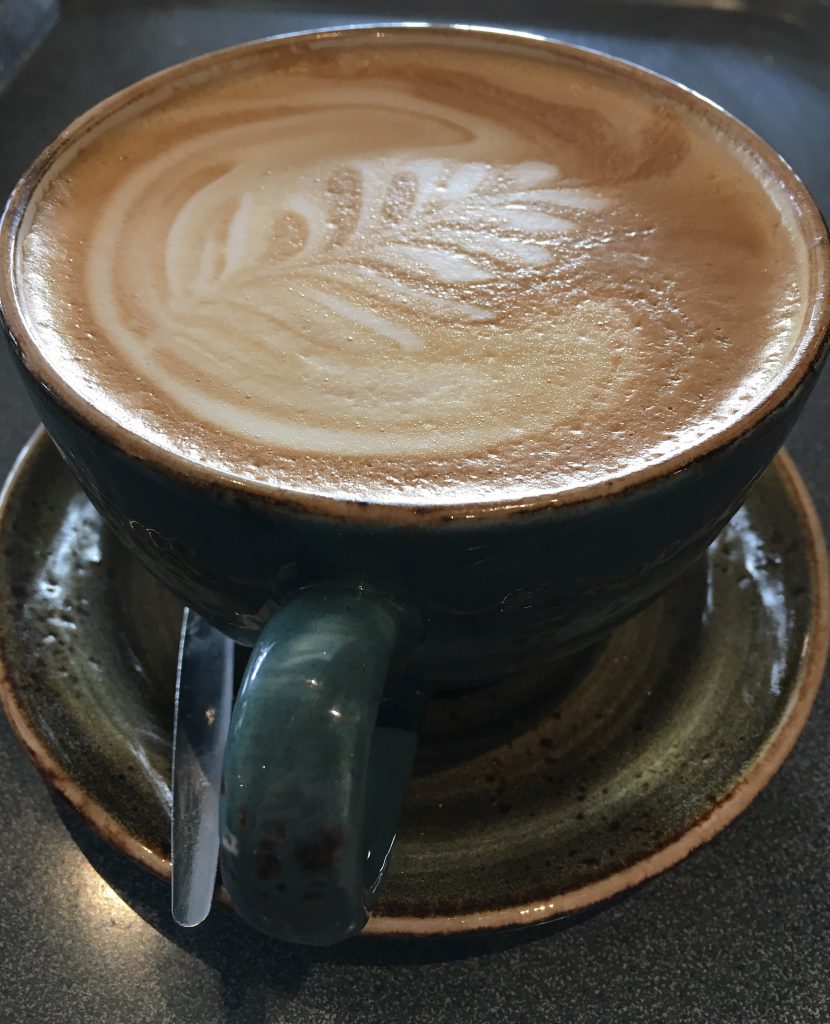 Once we’d had our coffee it was time for the walk home. There were no more postcards on our route but that doesn’t mean there were no more photographs. As we walked through the underpass at Six Dials I couldn’t help smiling at a ‘motivational’ piece of graffiti on a wall. The stencil work may not be quite Banksy, but it brightened my day. 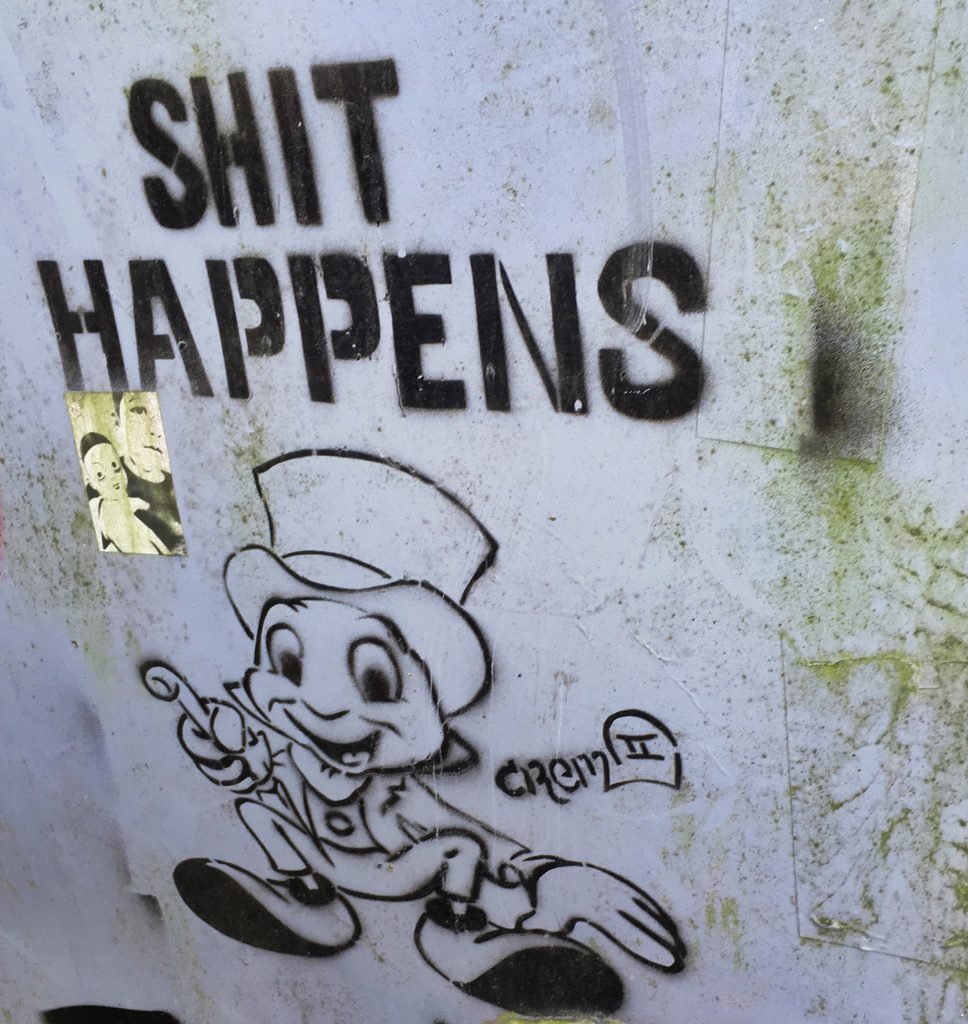 Then we noticed a distinctly nautical theme going on in the crumbling antique shops along Old Northam Road and a lovely wrought iron gate across the door of a closed shop. This may be one of the more run down areas of the city but there is certainly no shortage of interesting things to see there and I always enjoy walking through. 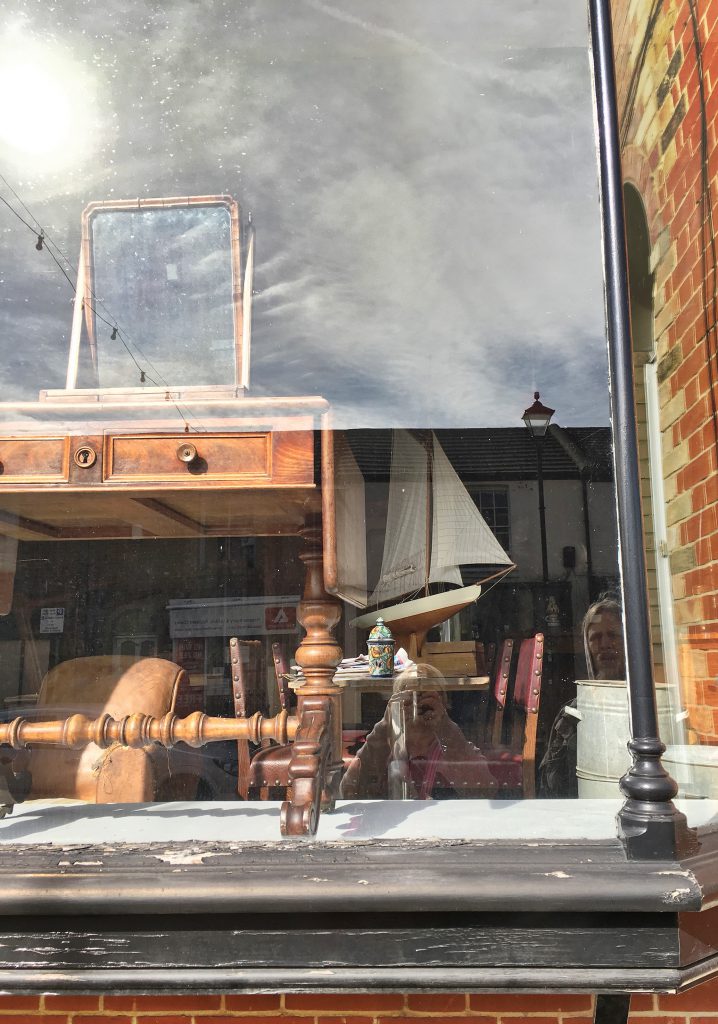 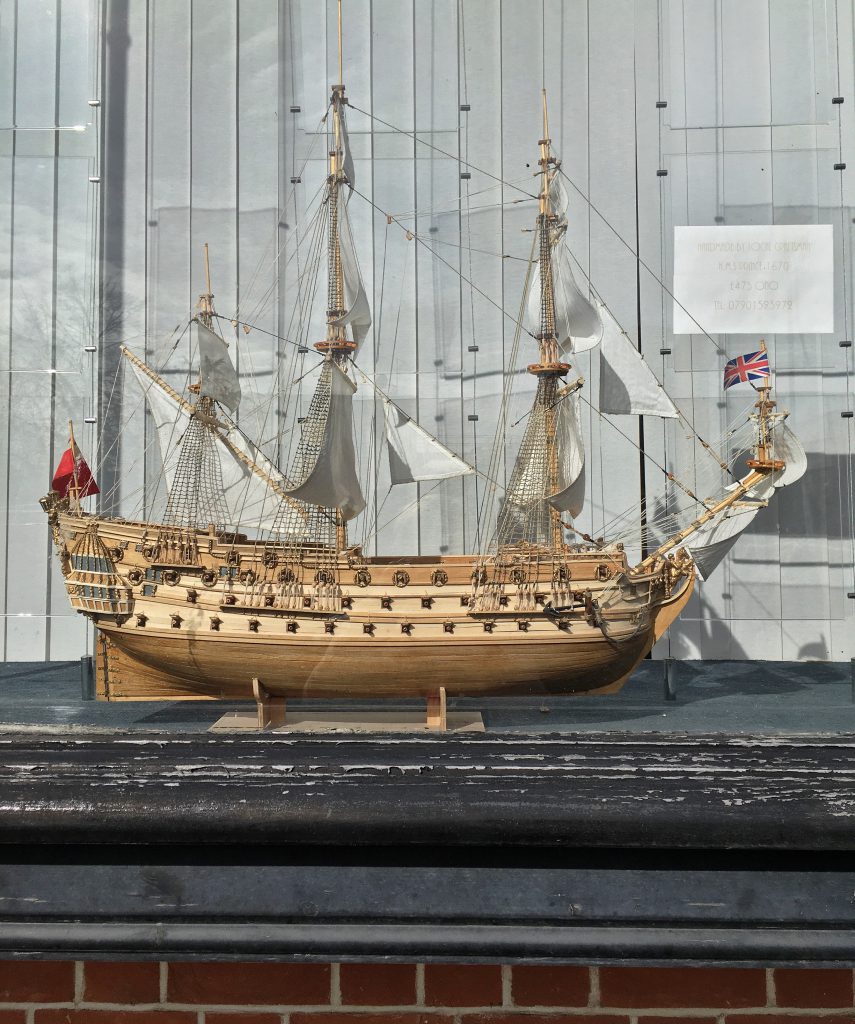 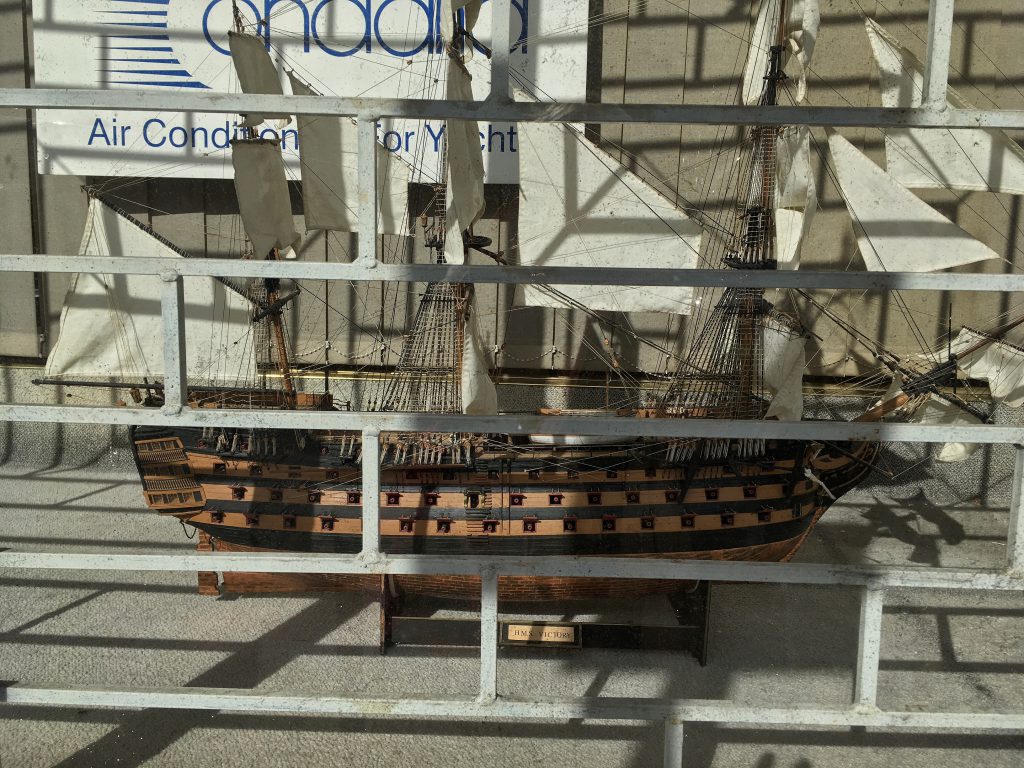 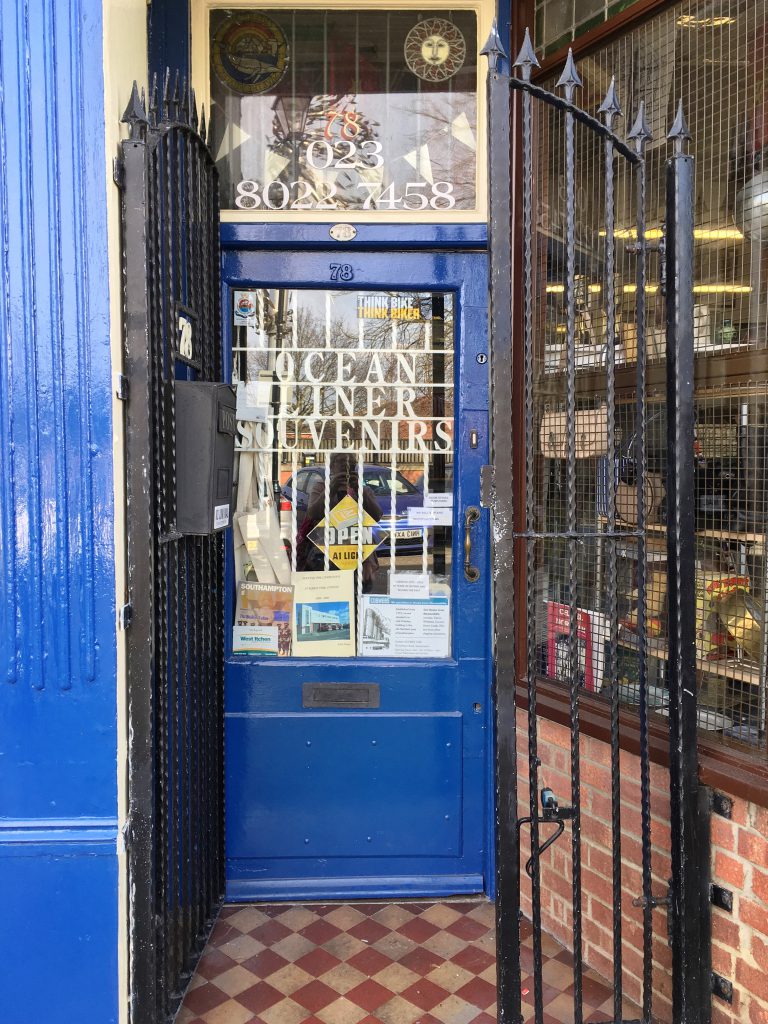 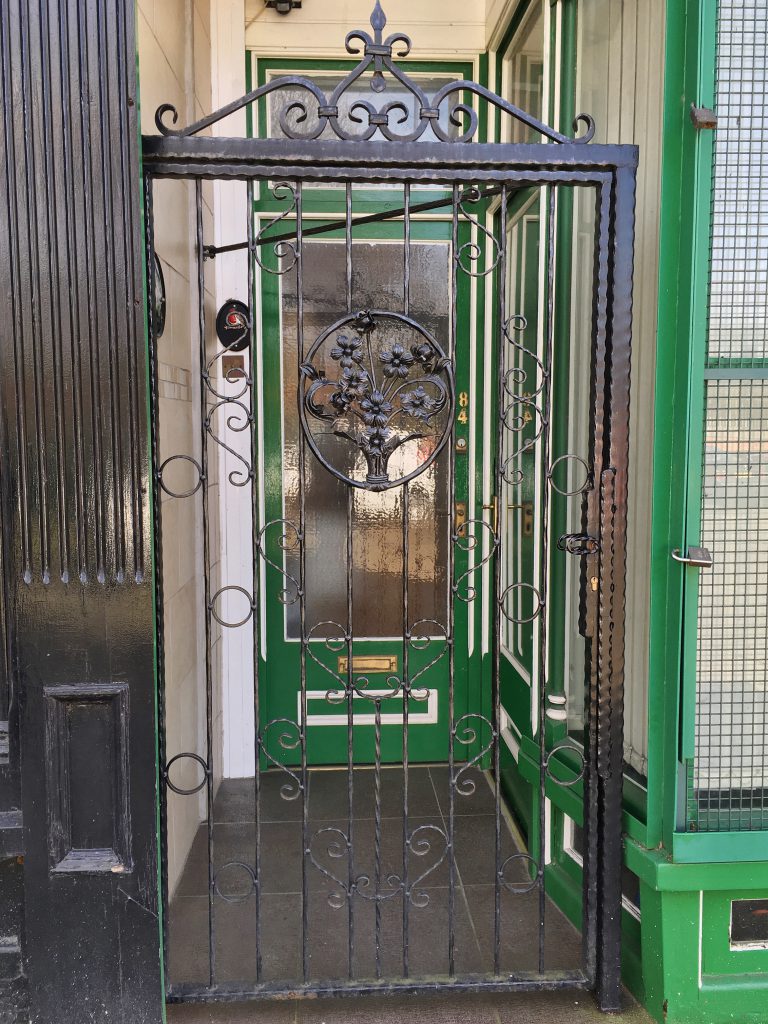 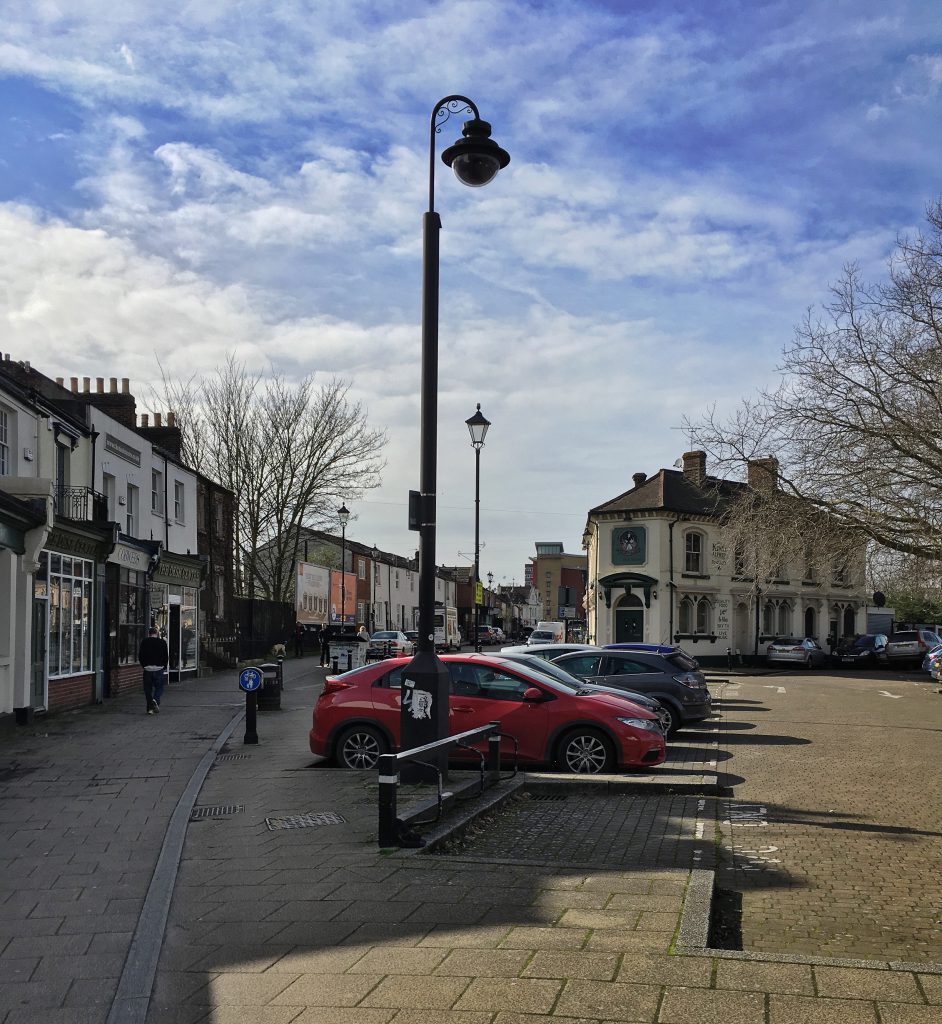 When we reached the painted shops a far less welcome sight greeted us. Someone had unceremoniously dumped a pile of rubbish on the corner, including old toys, clothes and, most worryingly, medicine bottles. Whether this increasingly common sight is connected with the council’s recent descision to charge at the local rubbish tips remains to be seen. It seems to me it is far cheaper for the council to let people dump their rubbish at the tip for free than to have to clear up all the fly tipping. Still, what do I know? 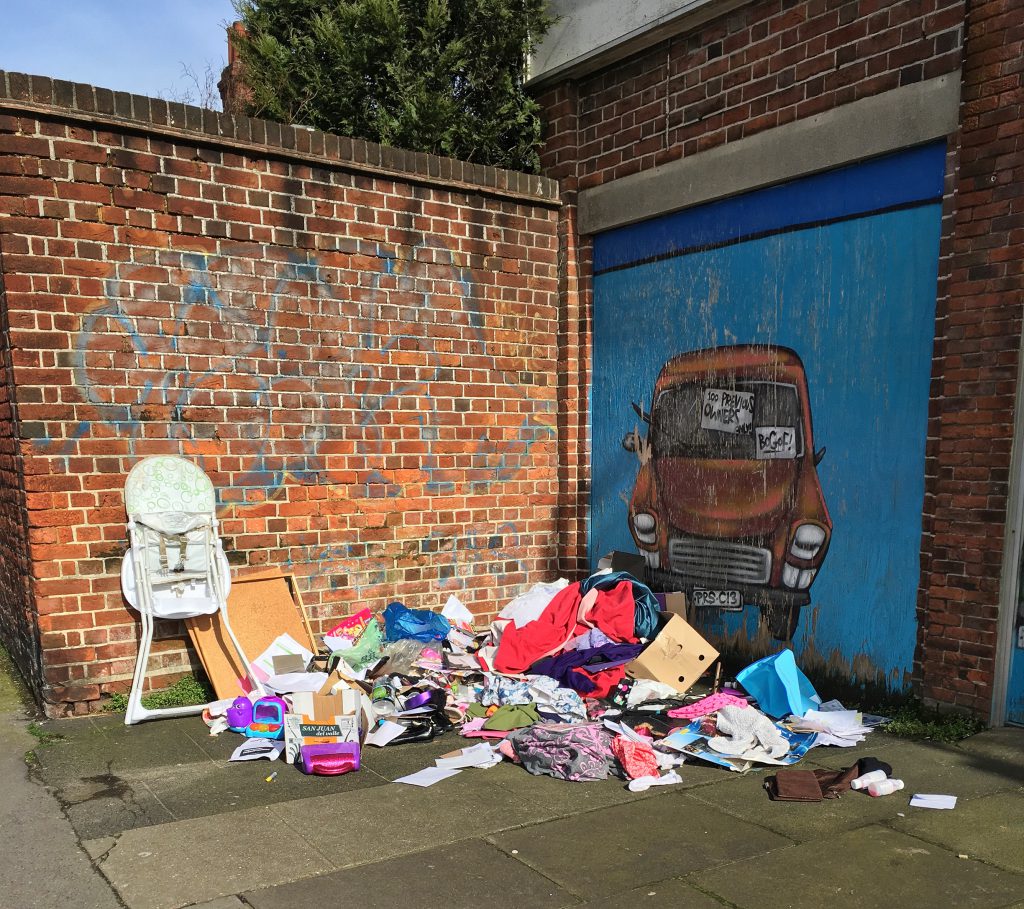 On the far side of Northam Bridge it was back to things nautical. Another new boat has appeared at the river’s edge alongside all the slowly decomposing hulks that already reside there. I’m not sure where all these boats come from or why people dump them, much like the fly tipped rubbish we saw earlier? It seems to me a boat is a very expensive item to just abandon though. Still, it will be something interesting to watch as I walk back and forth over the bridge. Crumbling boats have a certain charm to my mind. 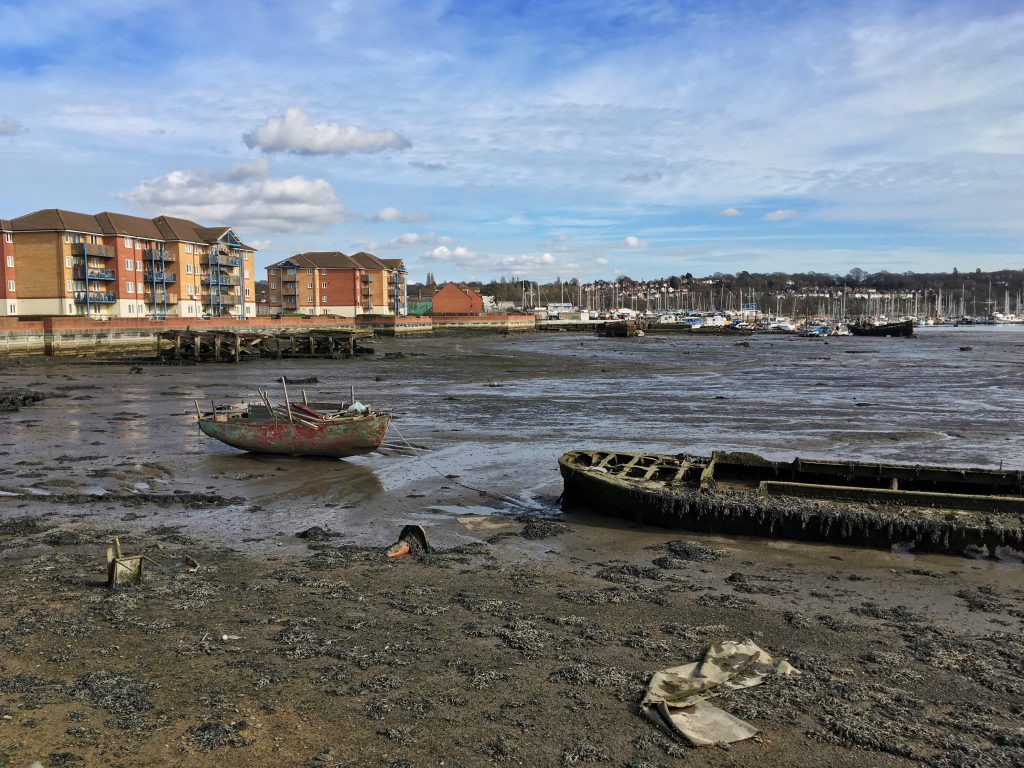 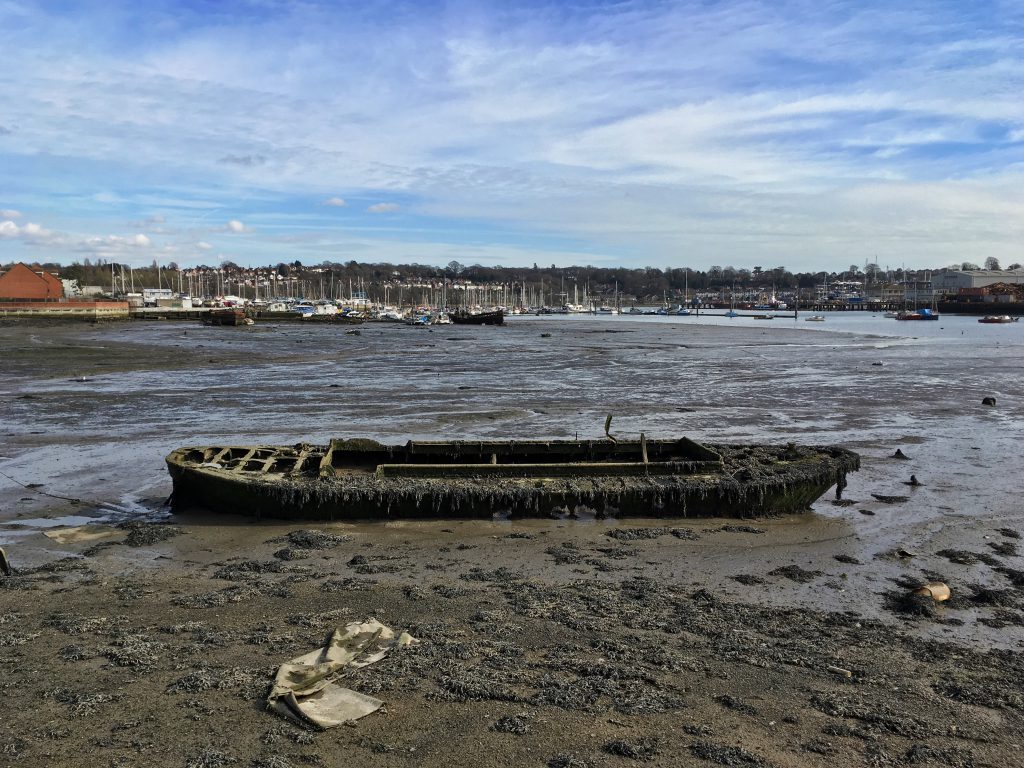 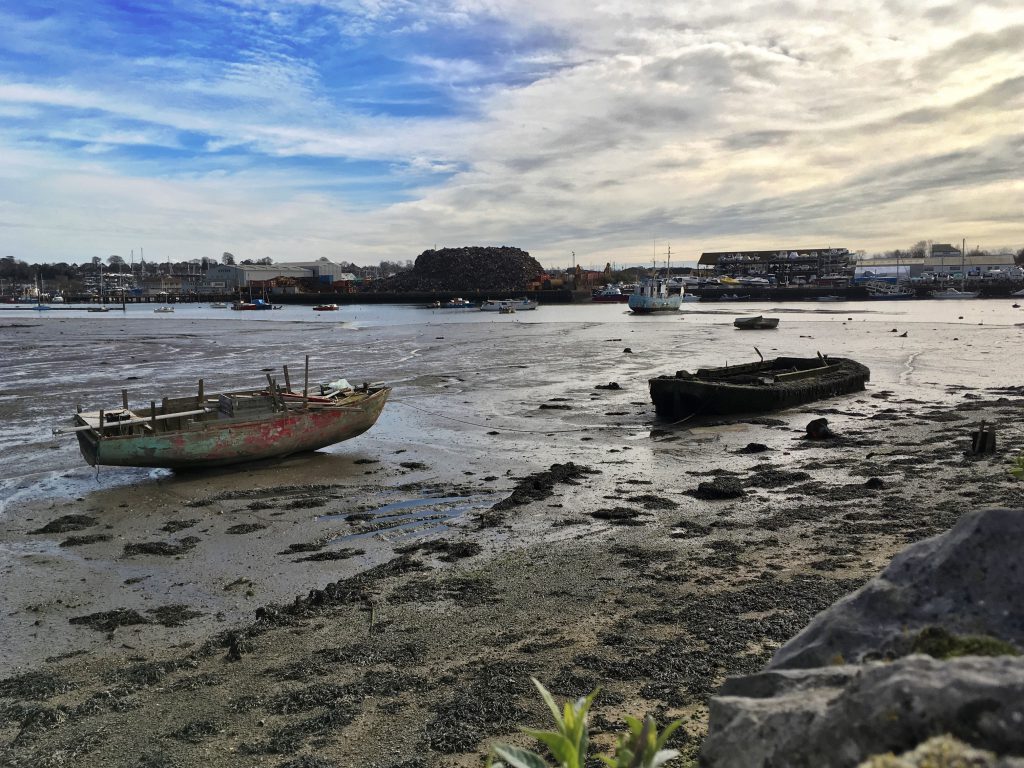 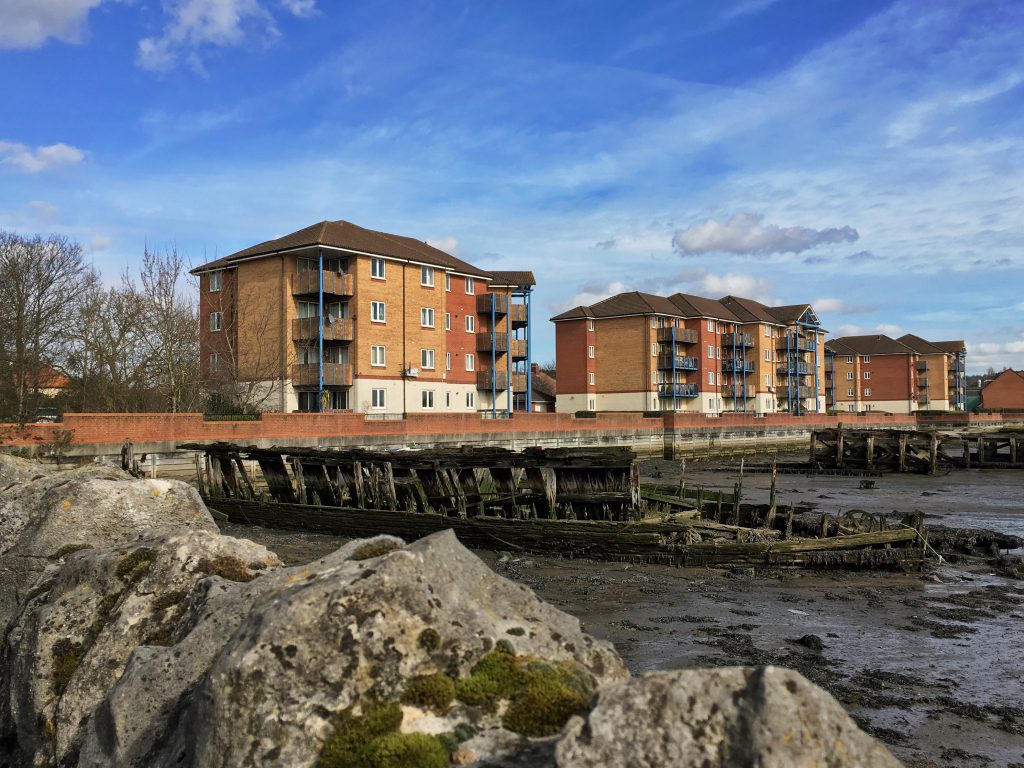 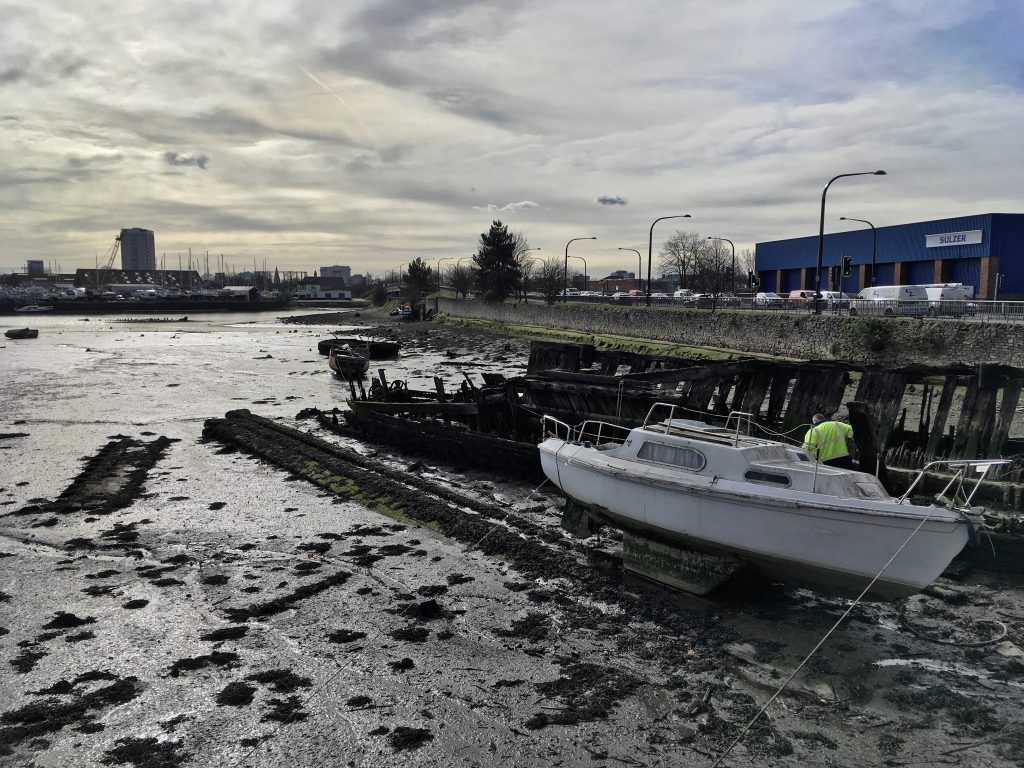 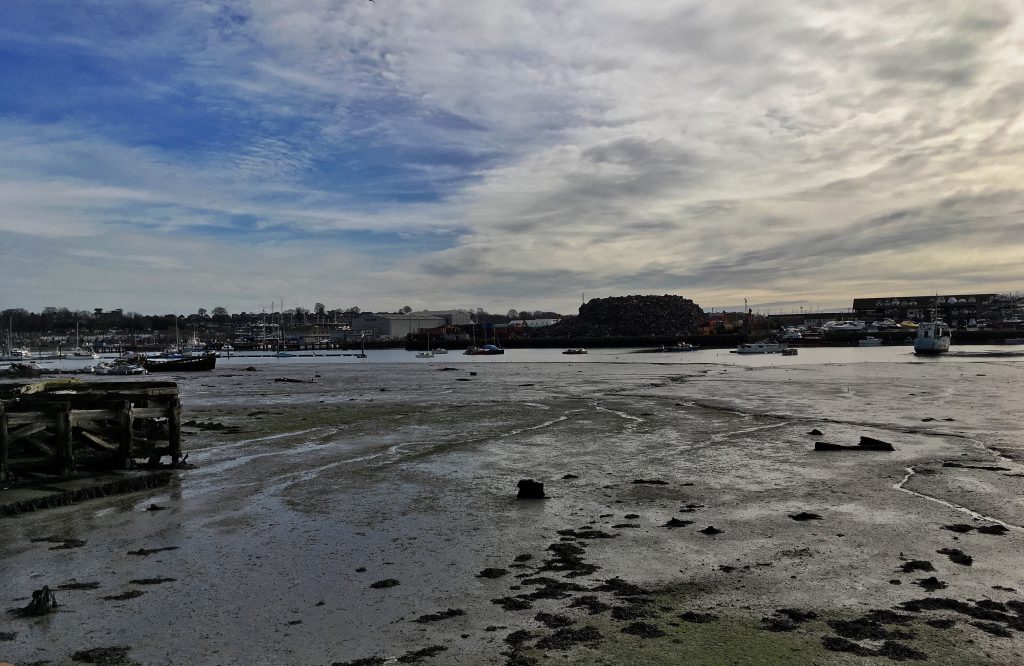 All in all we’d had a successful trip. Our errand went without a hitch and we managed to tick five more postcards off our list. As Stuart made somewhere in the region of two thousand five hundred postcards I suppose we are not going to run out of places to go any time soon. Still, maybe the next walk should be a postcard free affair? 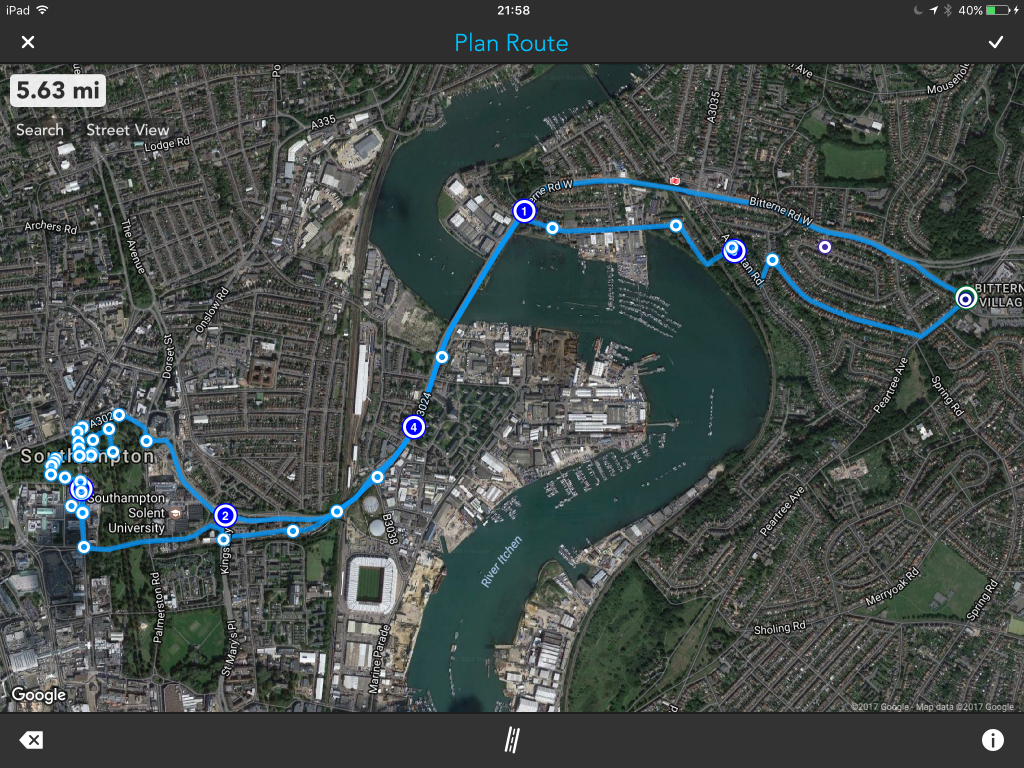 8 thoughts on “Postcards from Watts Park”