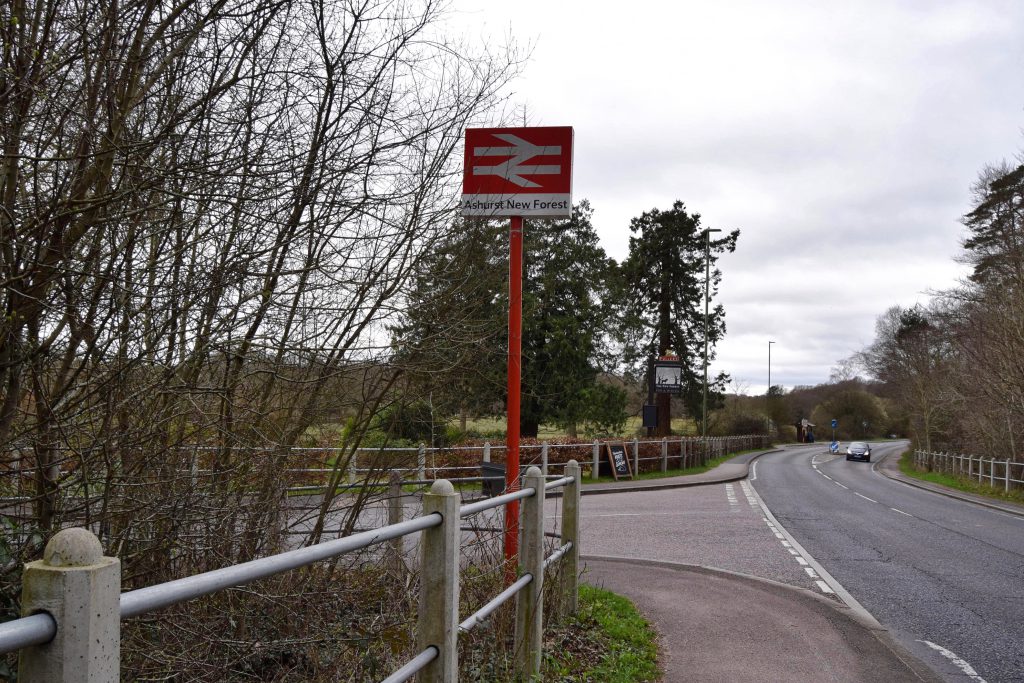 Thankfully, I didn’t have too far to hobble on my bashed up knee before we reached the New Forest Pub at Ashurst. This gave me a chance to nip off to the loo and examine said knee. It was bleeding, but not as much as I’d expected. More worryingly, it was already quite swollen and red. A little gentle prodding told me this was almost certainly bruising, by the looks of it under my kneecap, which, thankfully felt intact.

The rest of the group had settled in for a leisurely drink by this time but I knew sitting for too long wasn’t going to be a good idea. If my knee stiffened up too much I might never make it back to Totton. CJ and I had a quick Diet Coke, the price of which made my eyes water.
“Thank goodness I didn’t ask for rum in mine,” I said to CJ, “I’m not sure I’d have had enough money in my bank account to cover it.” 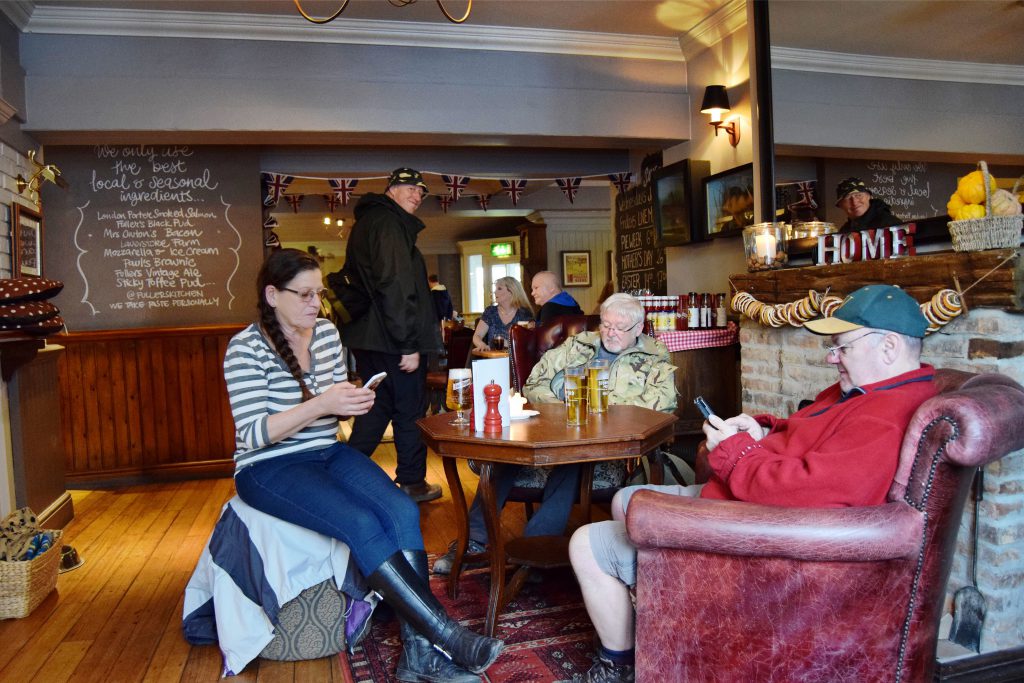 While we were drinking I phoned Commando to tell him where we were and let him know we might be longer than expected because of my fall. He’d finished his run and was watching the football on his phone in the car. He offered to come and get me but there was no way I was giving up on the walk. As long as I could put on foot in front of the other I’d keep going. As we were leaving Pete asked, “have you seen the air raid shelter outside?”
“I didn’t even know there was one,” I said.
“Instead of walking back to the road, keep going past the pub and the station. You can’t miss it. It looks a little like a garage and there are some steps up to the road behind it.”

This is a pub I’ve visited or walked past countless times so I was fairly sure the air raid shelter must be well hidden and was quite skeptical about finding it.  Usually ‘you can’t miss it’ means walking around for hours and never seeing whatever it is but, in this case, Pete was right. We walked past the pub and the railway station and, behind it we spotted a rectangular building smothered in ivy. It did look a bit like a garage and, with all the ivy, would have been easy to miss if we didn’t know it was there. 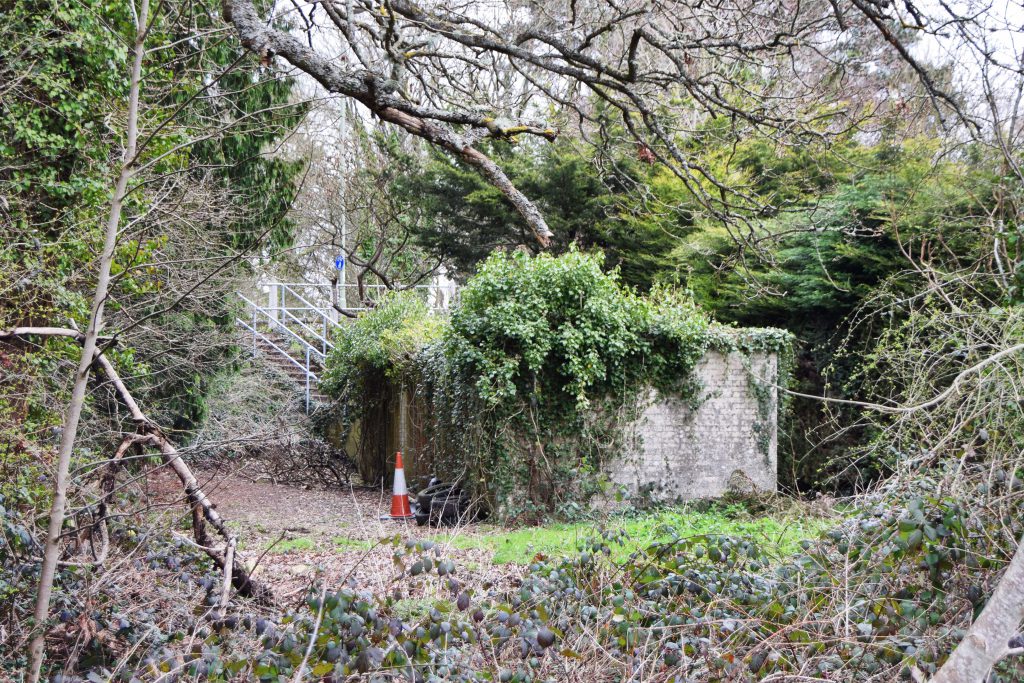 There are very few public air raid shelters left these days so CJ was quite excited to see it. He walked around looking for a way in and soon discovered the door was boarded up. On the side nearest the road, half concealed by the tumbling ivy, I discovered a small opening. Inside it was too black to see anything much but I poked the camera through and took a hopeful shot. It didn’t look like a pleasant place to spend any time but I suppose, when the bombs were falling, it would have been a welcome shelter. 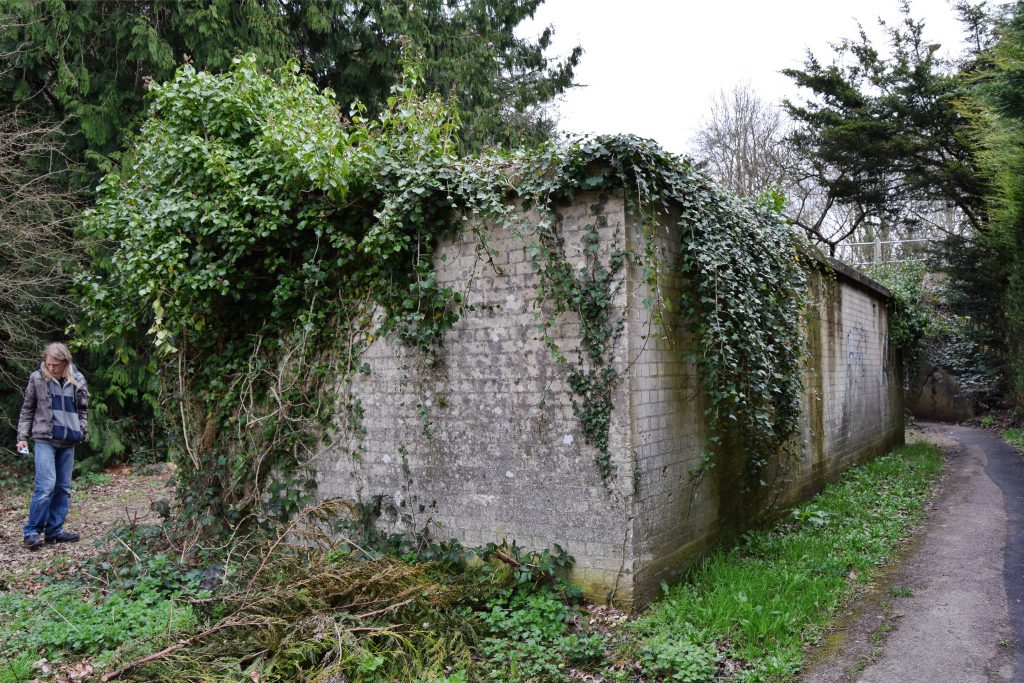 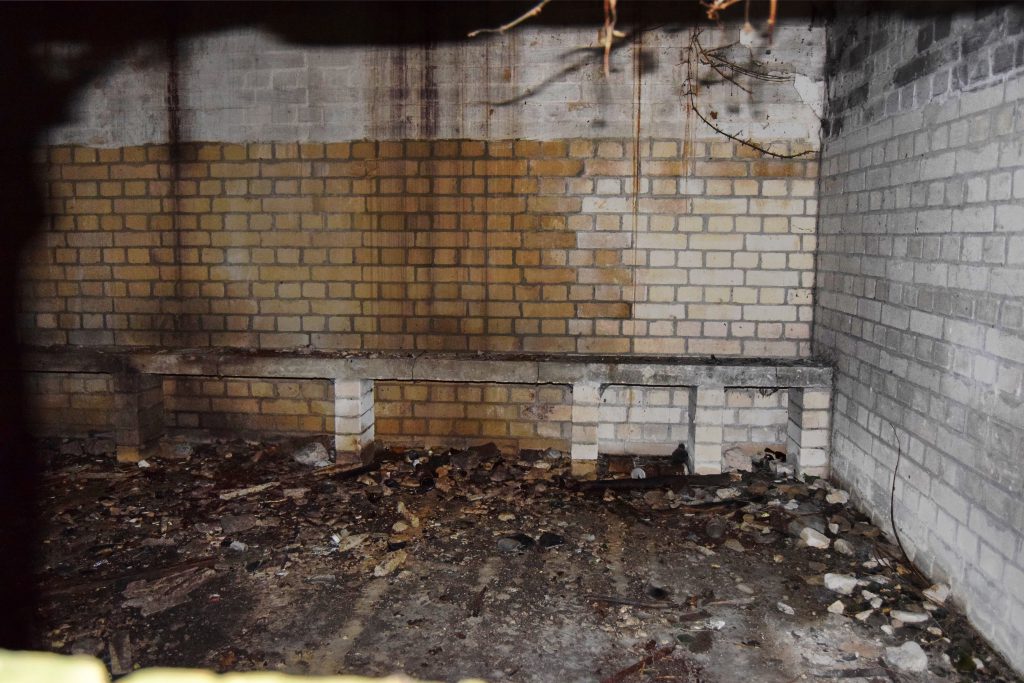 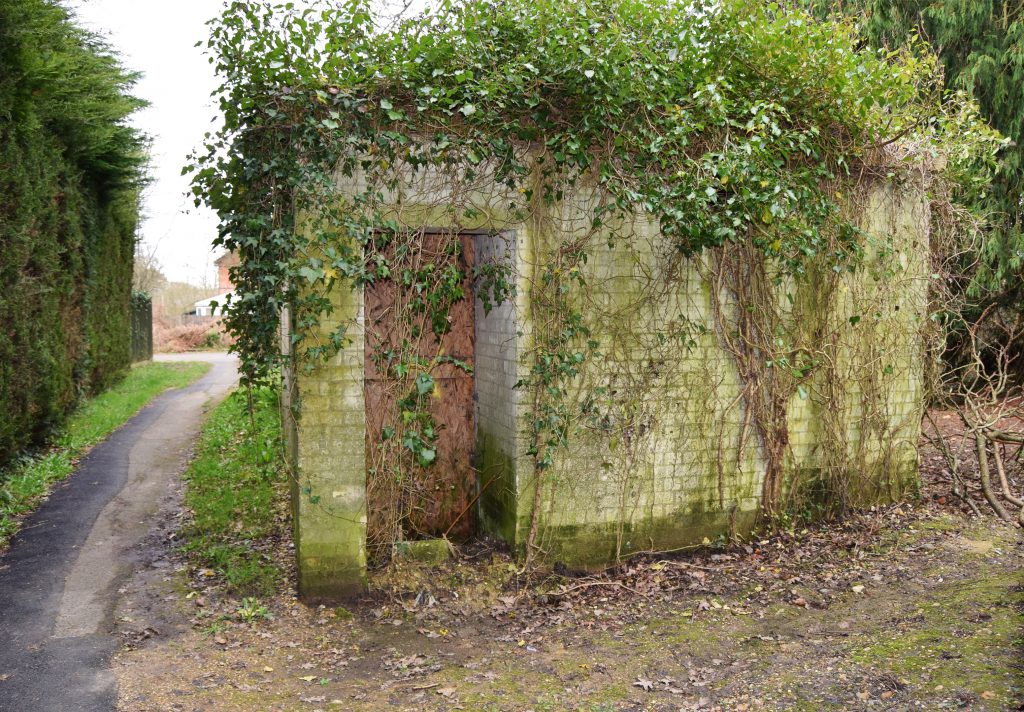 The steps up to the road were steep. For me, with my throbbing knee, they were quite a struggle but we made it to the top eventually. From the road both steps and shelter are almost completely hidden. If Pete hadn’t told us about them we’d never have seen them. 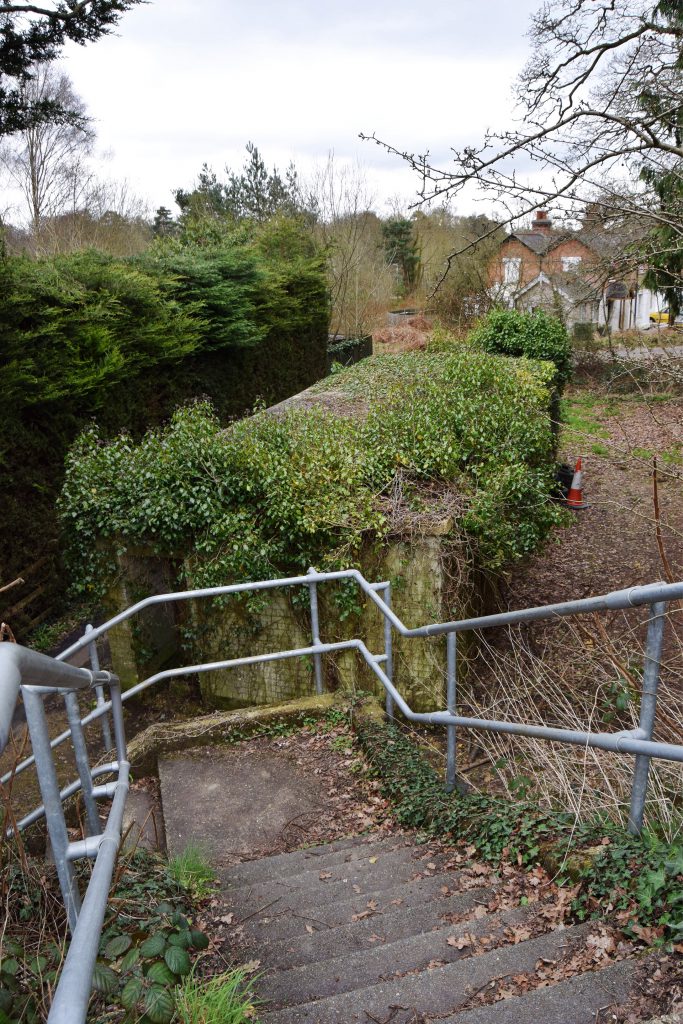 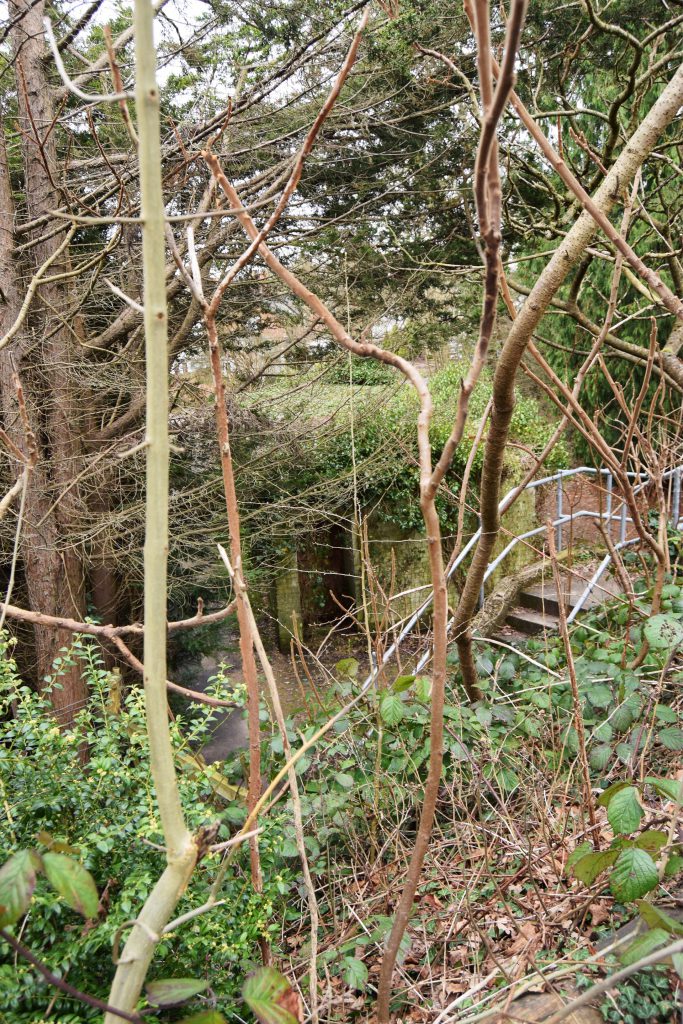 Moments later we crossed the railway bridge. Ashurst Station, nestled beside the line amongst all the trees, looked much as it must have when the air raid shelter was in use. On the other side of the bridge were two more pubs within a quarter mile, the Happy Cheese and the Forest Inn. Given how many pubs are closing in the city it seems odd to find three surviving cheek by jowl in the forest. Possibly the railway station and the campsite at Ashurst are the reason they stay in business. 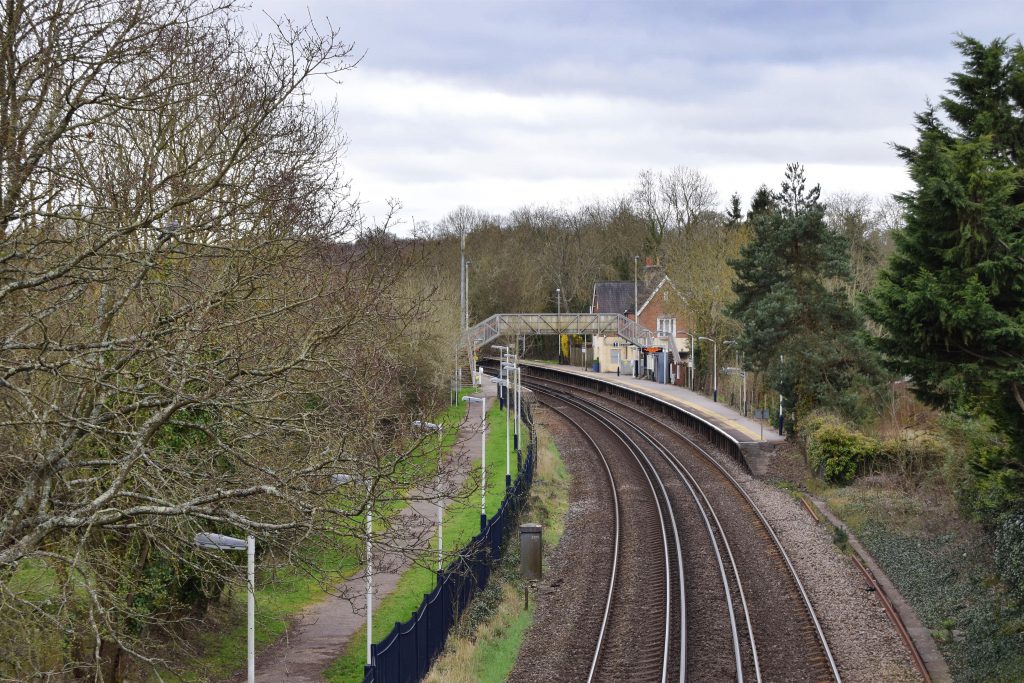 Between the second two pubs we passed Ashurst Hospital. Had my knee been worse this might have been useful, although, by the looks of it there is no accident and emergency department. The red brick chapel beside the hospital buildings looked as if it might have been worth a visit but my knee was hurting too much for any extra walking so we kept going towards Totton. 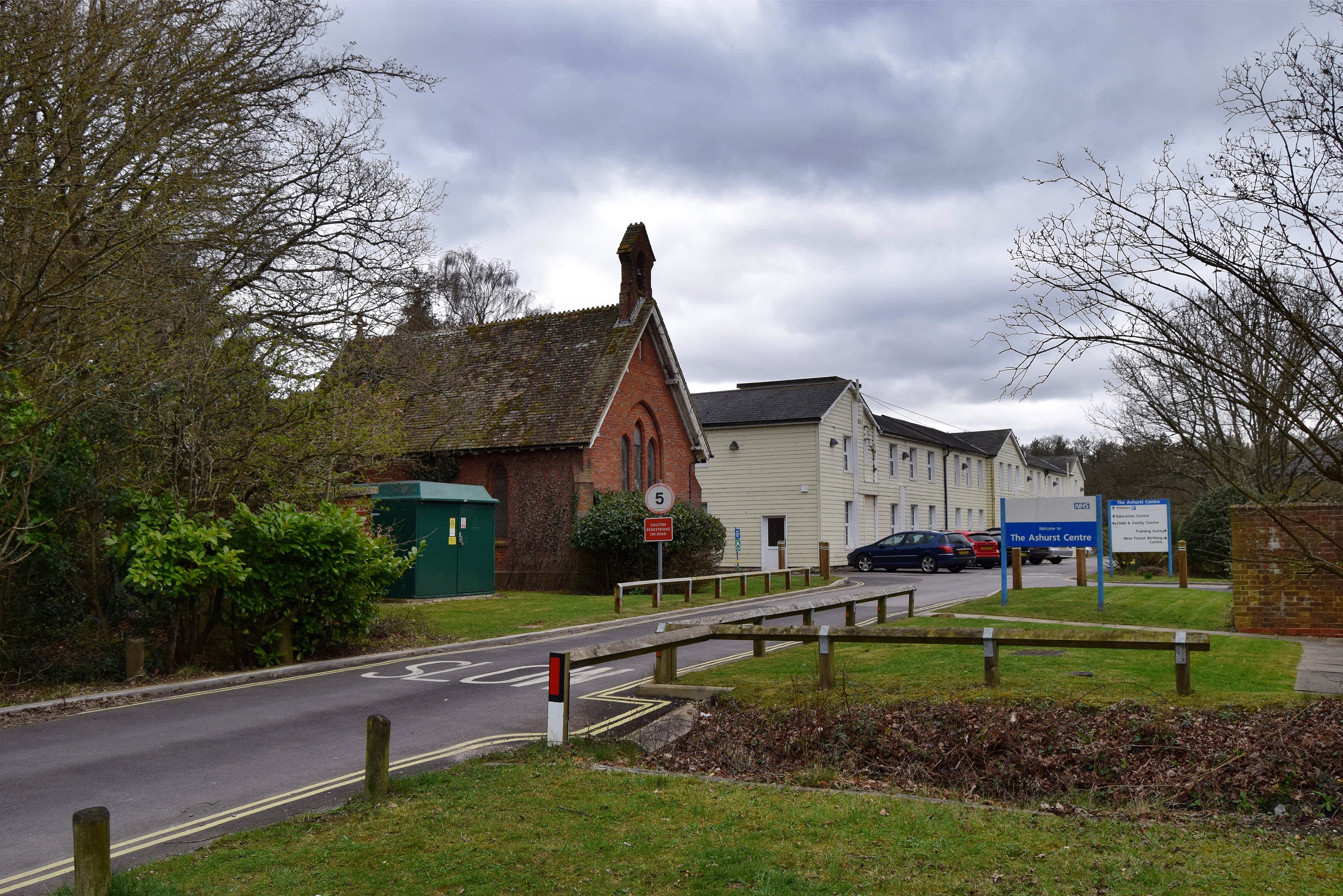 Our trail walking was now over for the day, which was probably for the best all things considered, and we were now on Lyndhurst Road passing through the village of Ashurst. The daffodil and primrose filled verges made up for the cars passing by and, once the village was behind us, we had fields to look out on. 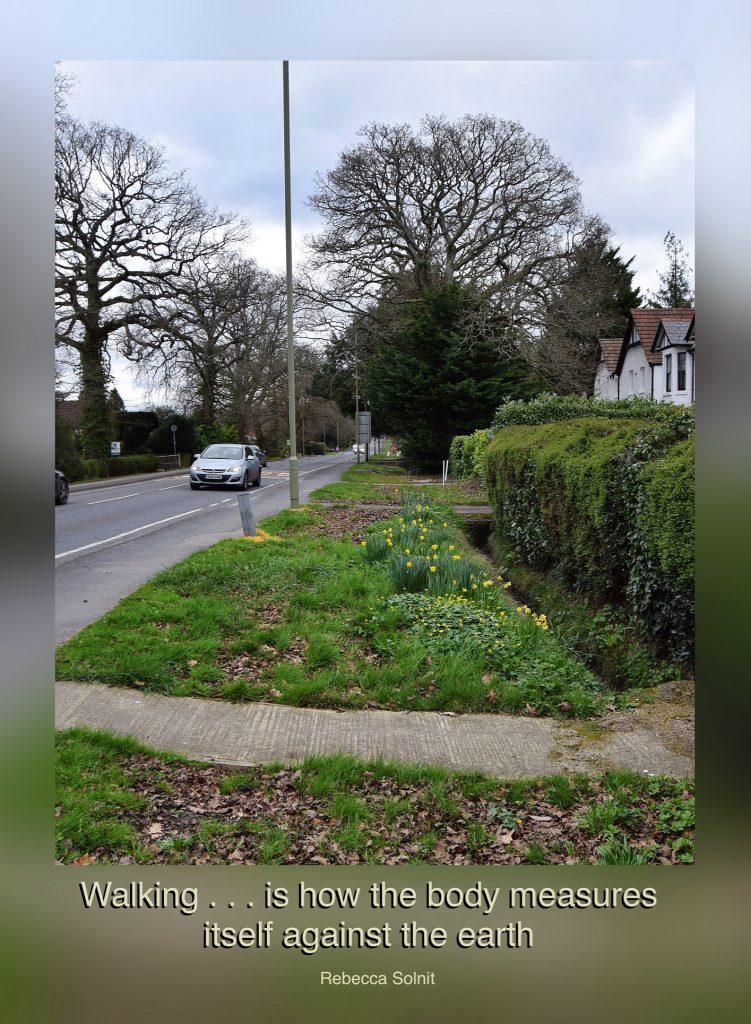 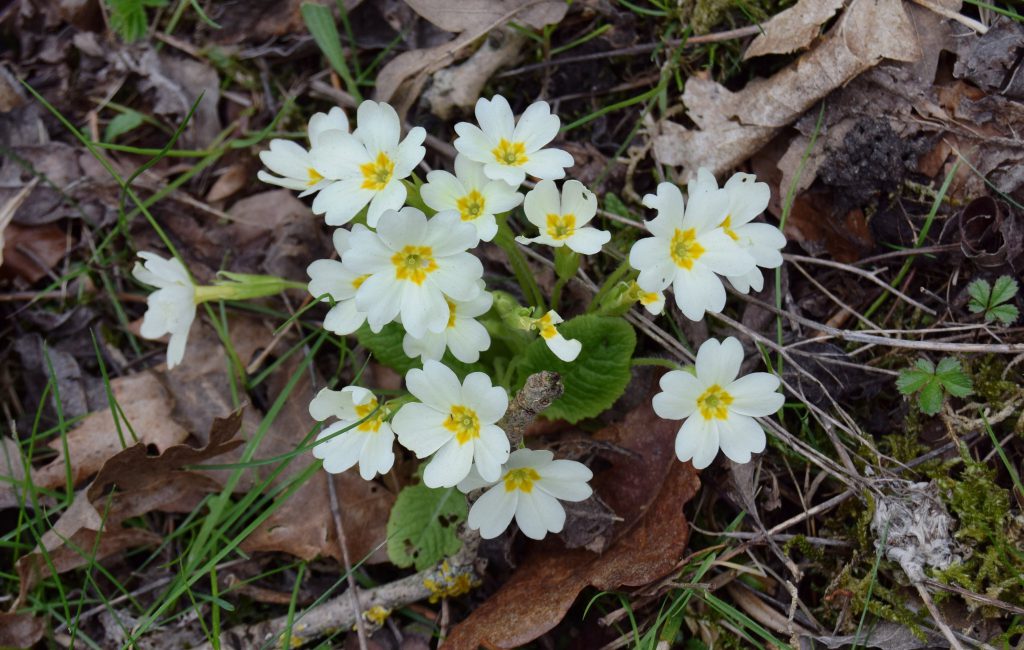 Earlier in our walk we saw a deer crossing the trail in front of us at Deerleap. The New Forest is filled with deer, it began life as a place for Kings and noblemen to hunt them so this is no real surprise. Seeing them is a rarity though because they are fairly shy and good at disappearing into the trees and humans are surprisingly loud even when they’re trying to be quiet. Today turned out to be a three deer day though. CJ was pining for ponies to whisper to and got quite excited when he saw some on the other side of one of the fields we passed. 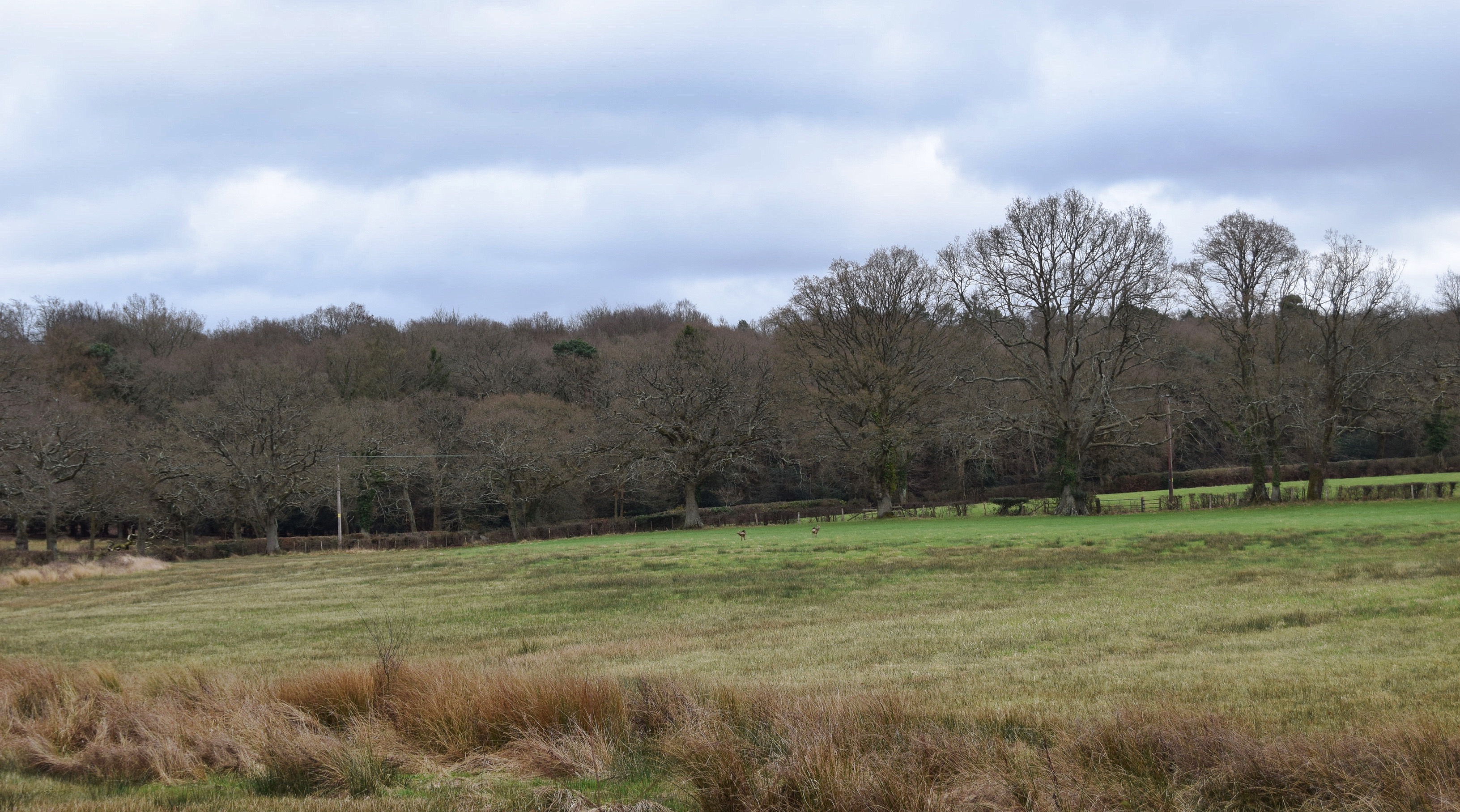 A closer look told us the ponies were actually a pair of deer. Of course they were on the other side of the field and even then they knew very well we were nearby and were watching us even closer than we were watching them. Photos were taken. They weren’t the best photos but good enough that you can see they really were deer. 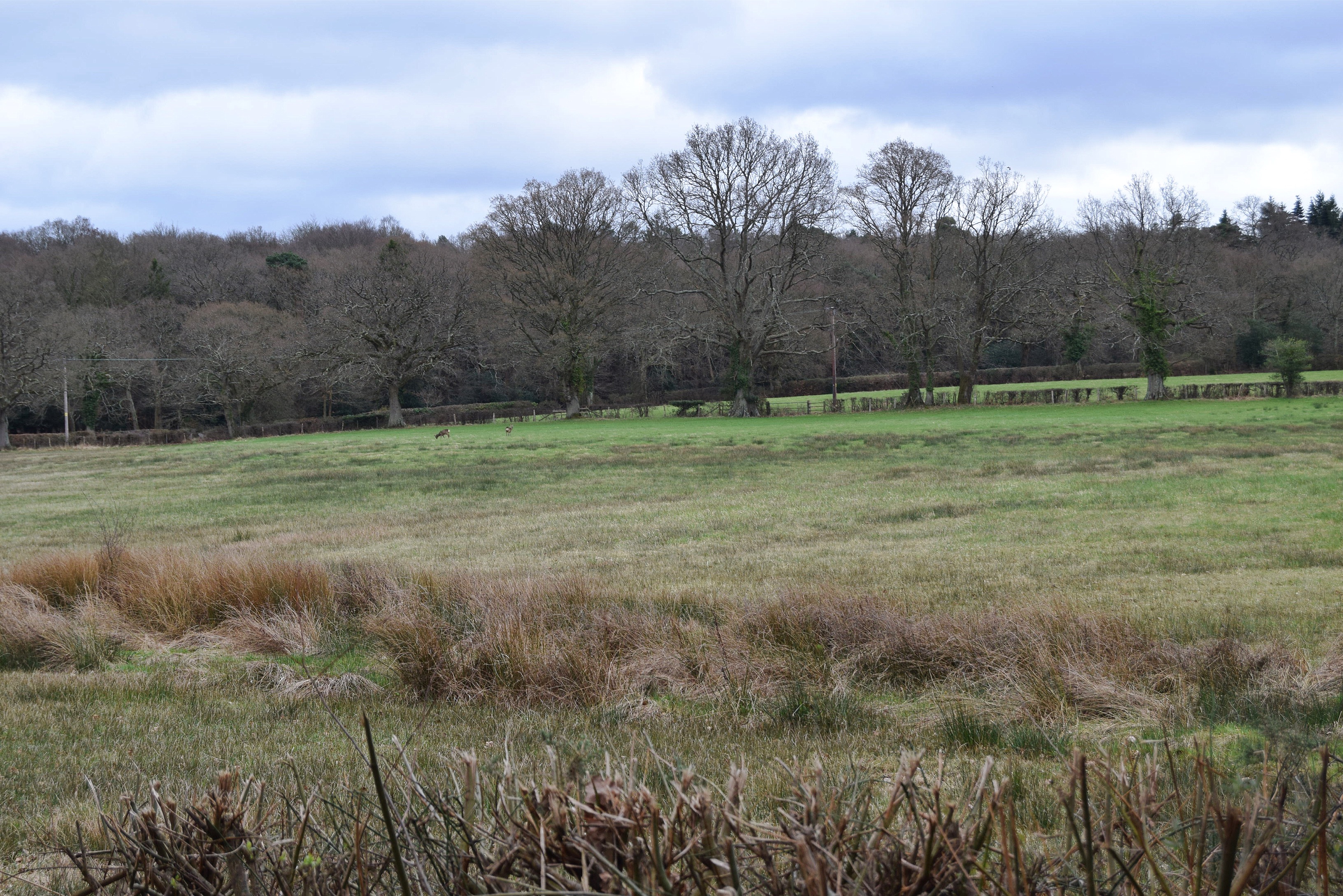 Not long after this, as we were approaching Colbury, we saw something else quite odd in a field. At first glance it looked like a man, leaning against a fence. There seemed to be something wrong with him. He was standing at a very peculiar angle. Maybe he was drunk? When we got nearer it was a shock to find he was headless! 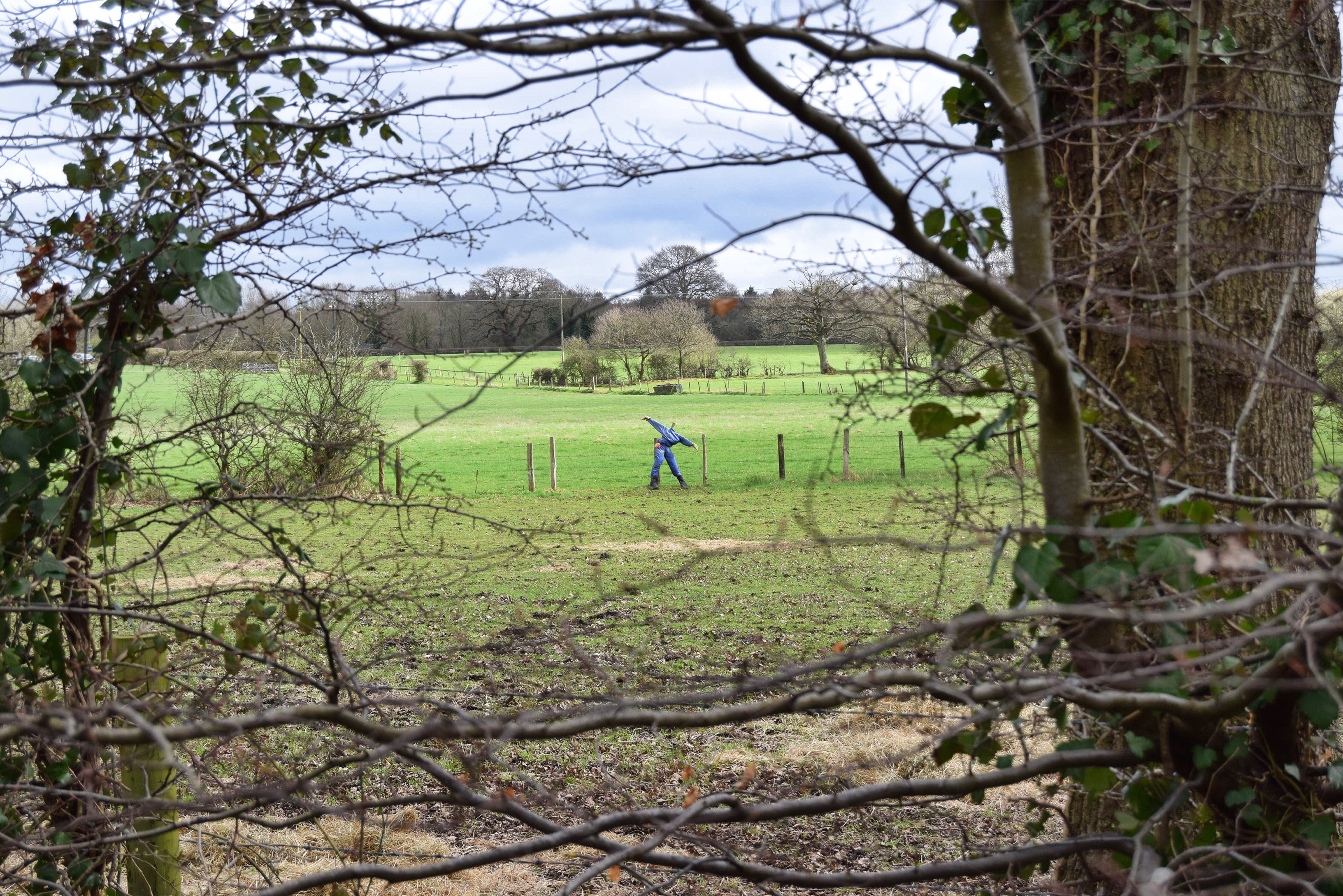 Just as I was thinking we might have stumbled upon the scene of a murder or a New Forest ghost CJ realised he was actually a scarecrow. Whether he once had a head and had lost it is a mystery but he seemed to be a doing a good job because we didn’t see a single crow. 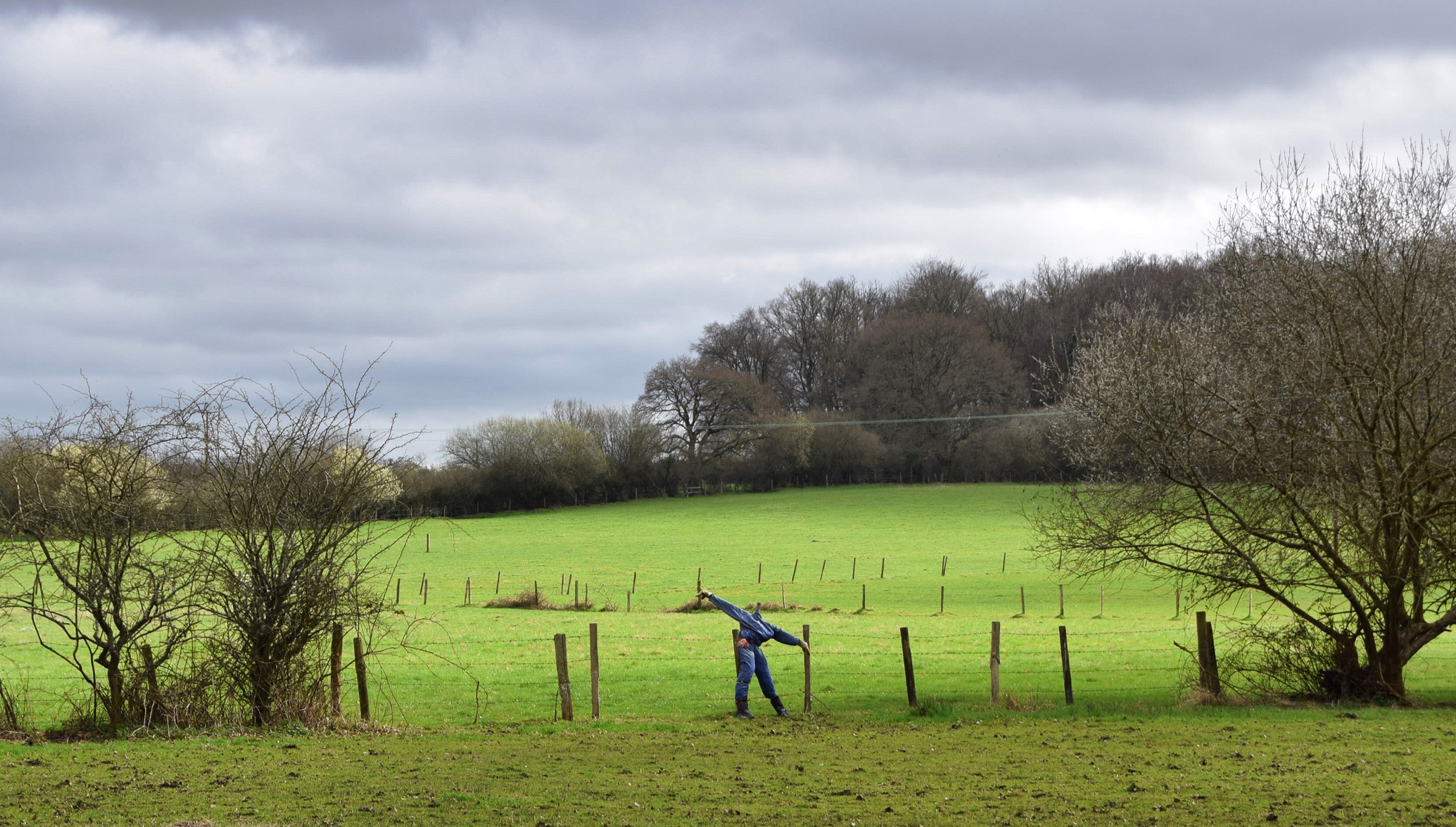 Much to CJ’s delight, there were ponies at the edge of the field, right beside the gate. Of course this meant a stop while he whispered to them but, at this stage I was glad of a chance to rest my knee anyway. 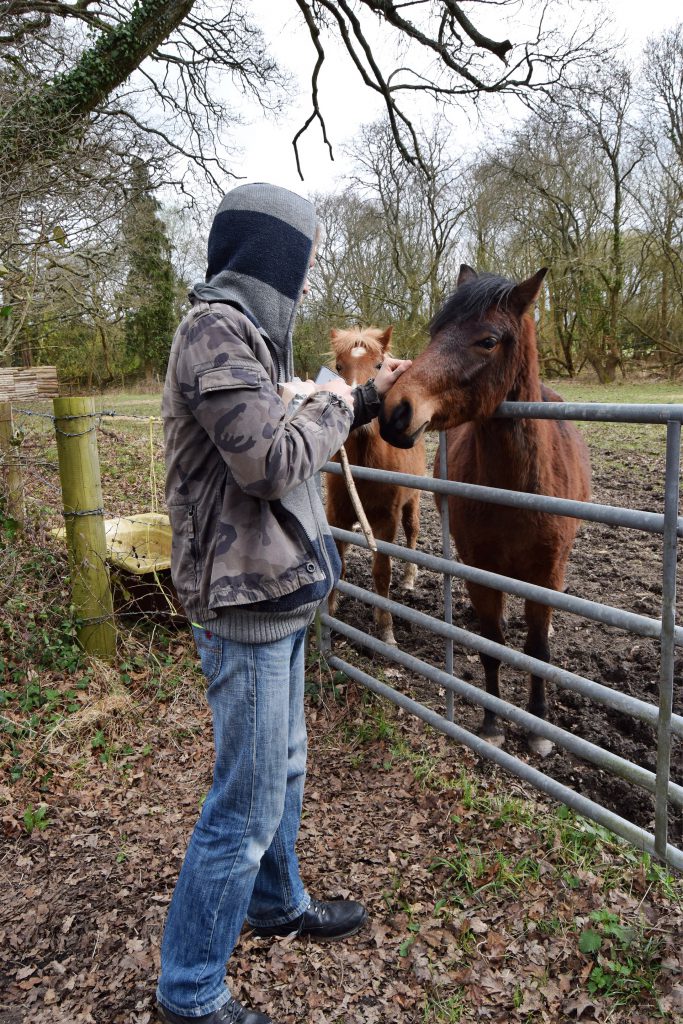 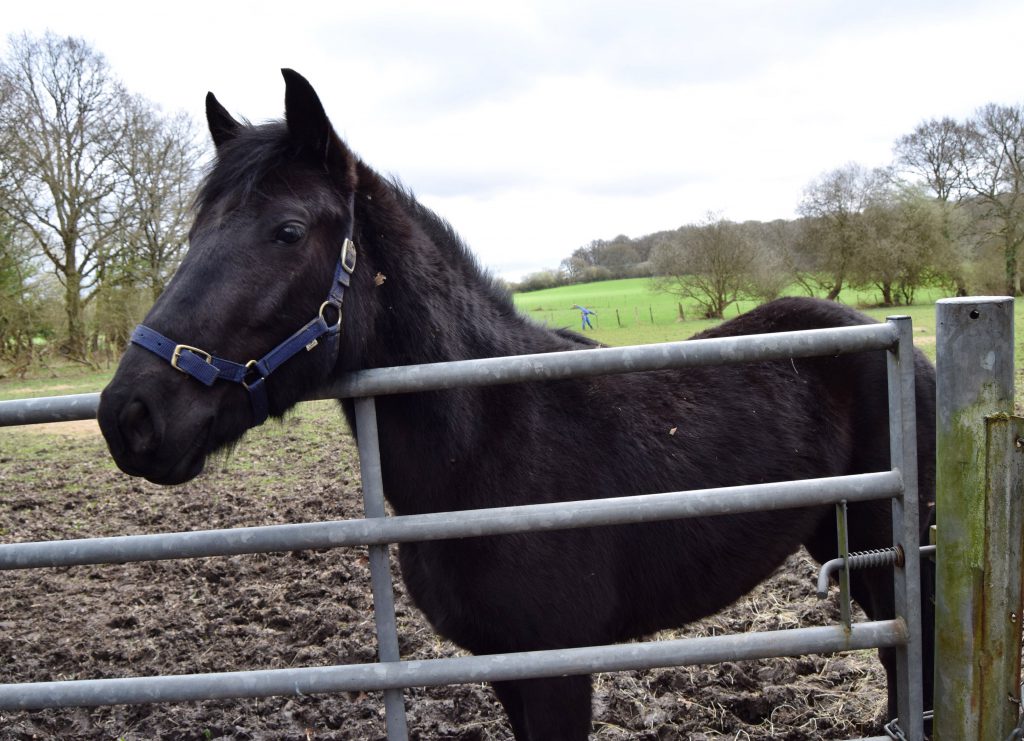 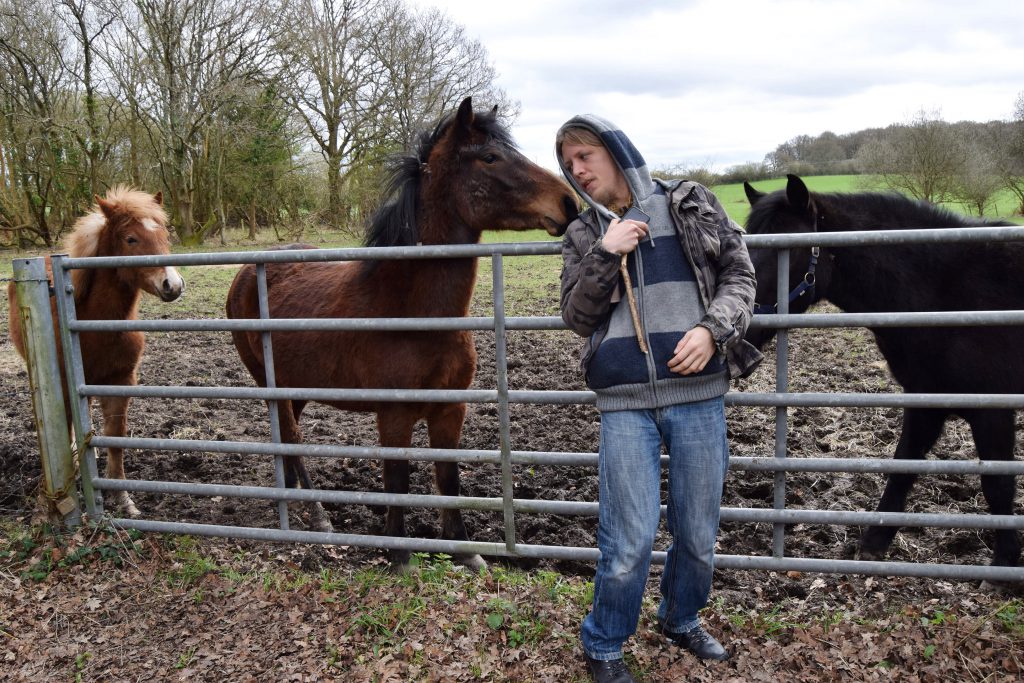 In the corner of the field was a little log hut. This is something I’ve seen before in passing and wondered about. Until now I’d thought it might be a shed of some kind but the horses were the final puzzle piece, telling me it was a small stable. What lucky horses to have such a nice home. 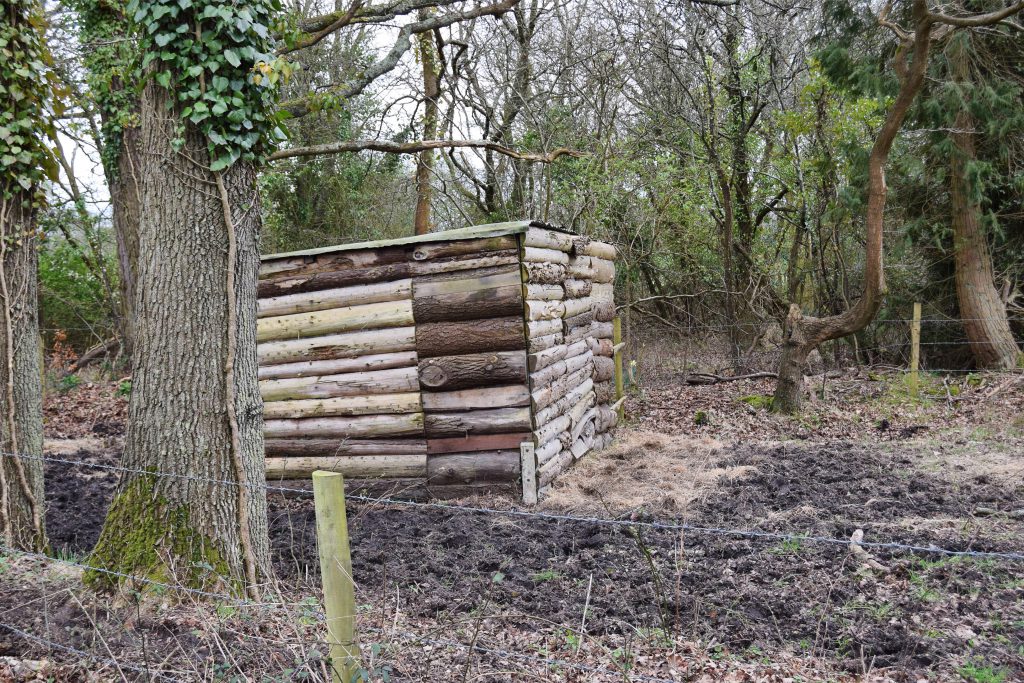 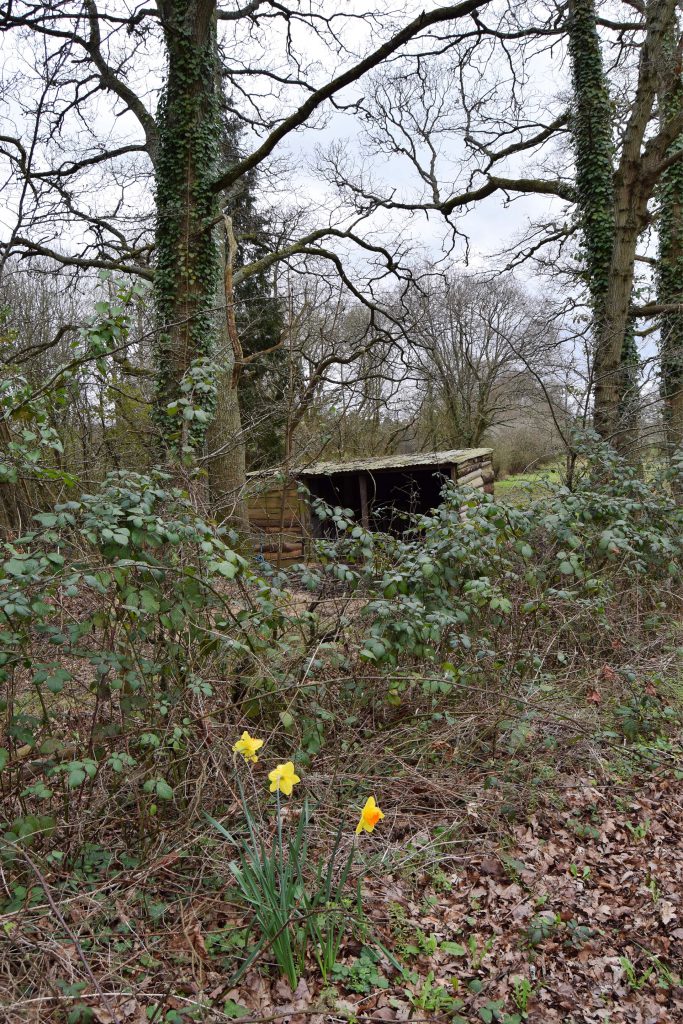 Eventually CJ finished talking to the horses and we were in our way. Pretty soon we were at the top of Hunters Hill, almost in sight of the finish line. In the far distance we could see the towers of Redbridge and Milbrook. Going down the hill made my knee grumble more than it already was and progress was slow with plenty of stopping. 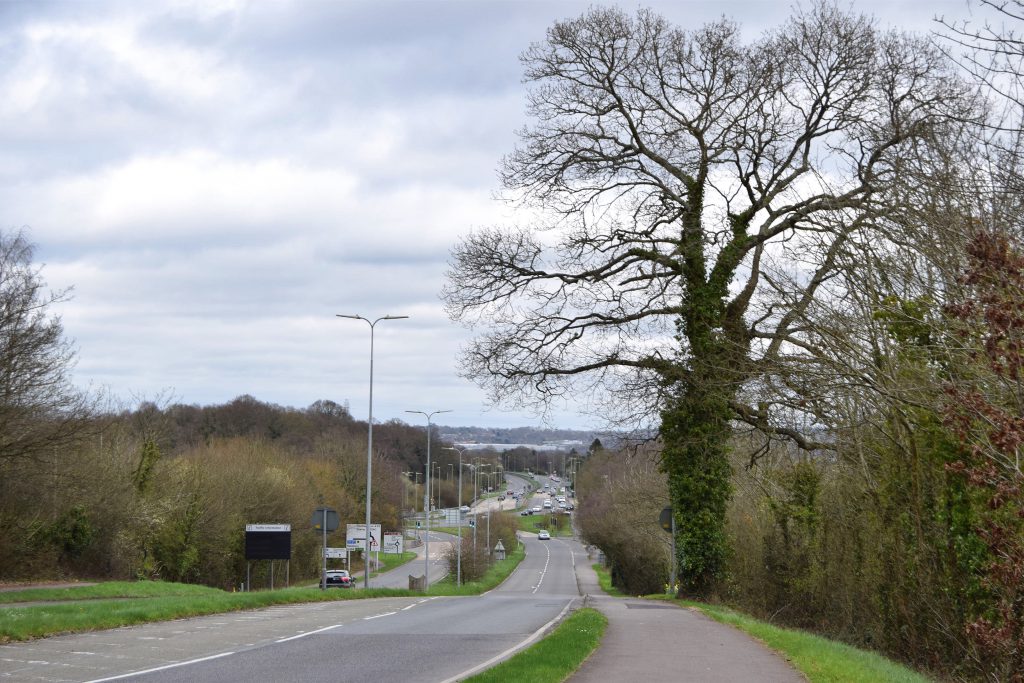 The pretty  New Forest road sign was a good excuse for a rest and, a little further on, we found some sheep in a field. CJ was amused to see one black sheep amongst them.
“The black sheep of the family,” he laughed.
“If our garden was bigger I wouldn’t mind keeping a sheep or two,” I said. “Think of all the wool. I could knit some wonderful jumpers.”
“Dad would probably never have to cut the grass again either,” CJ chuckled. 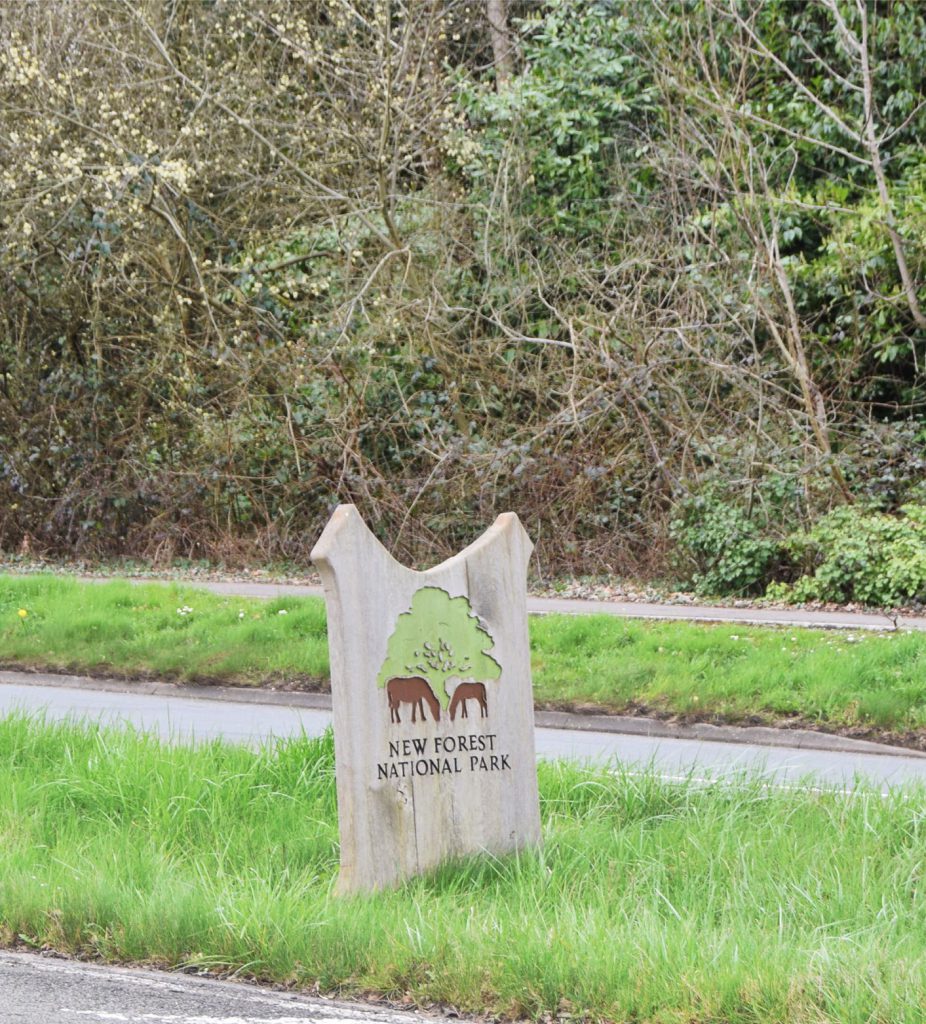 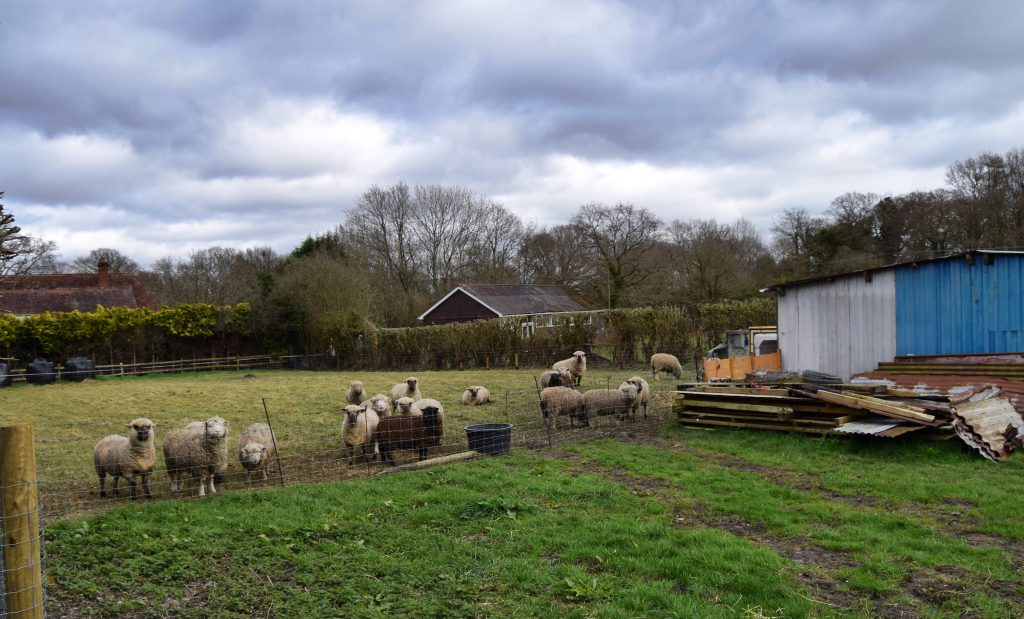 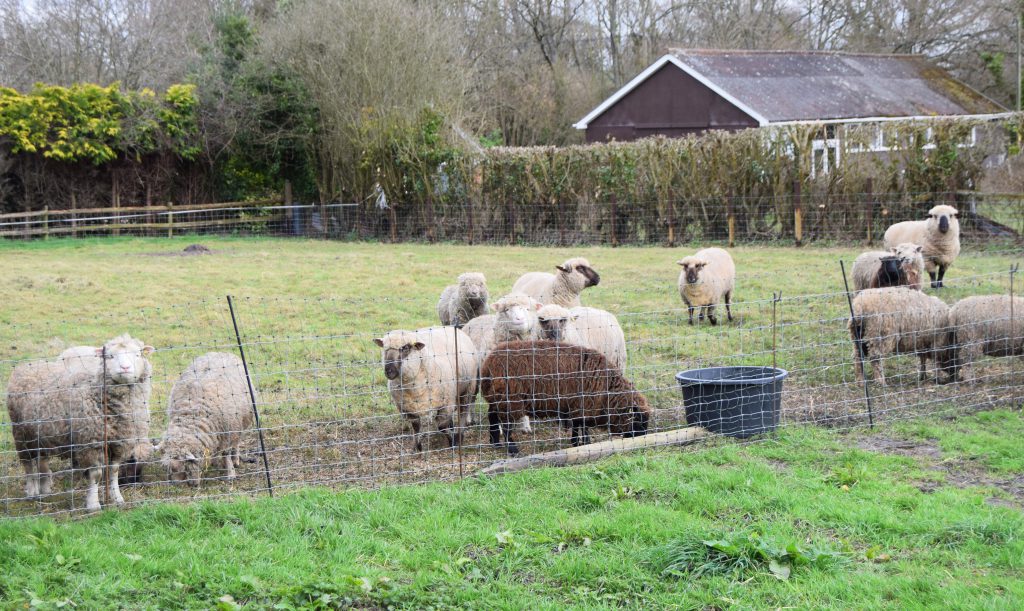 It was a relief to pass the Colbury Memorial Hall, built in memory of Colbury men who lost their lives in World War I. Now all we had to do was cross the motorway bridge and we were nearly back where we started. Then we were passing the thatched cottage I always admire. It would be a wonderful place to live if it wasn’t on such a busy road. 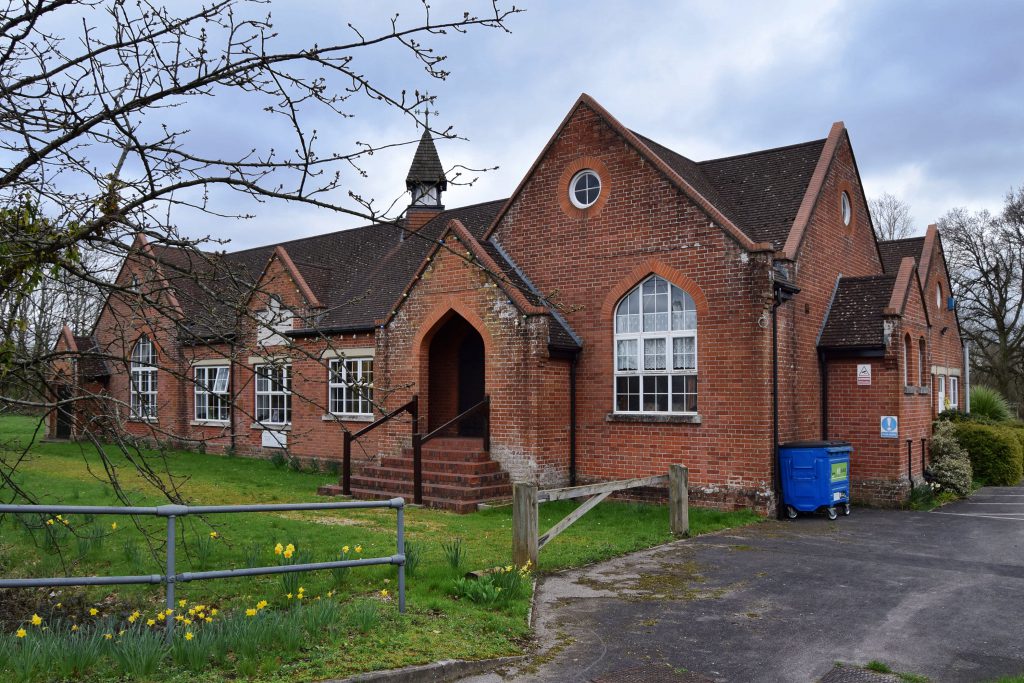 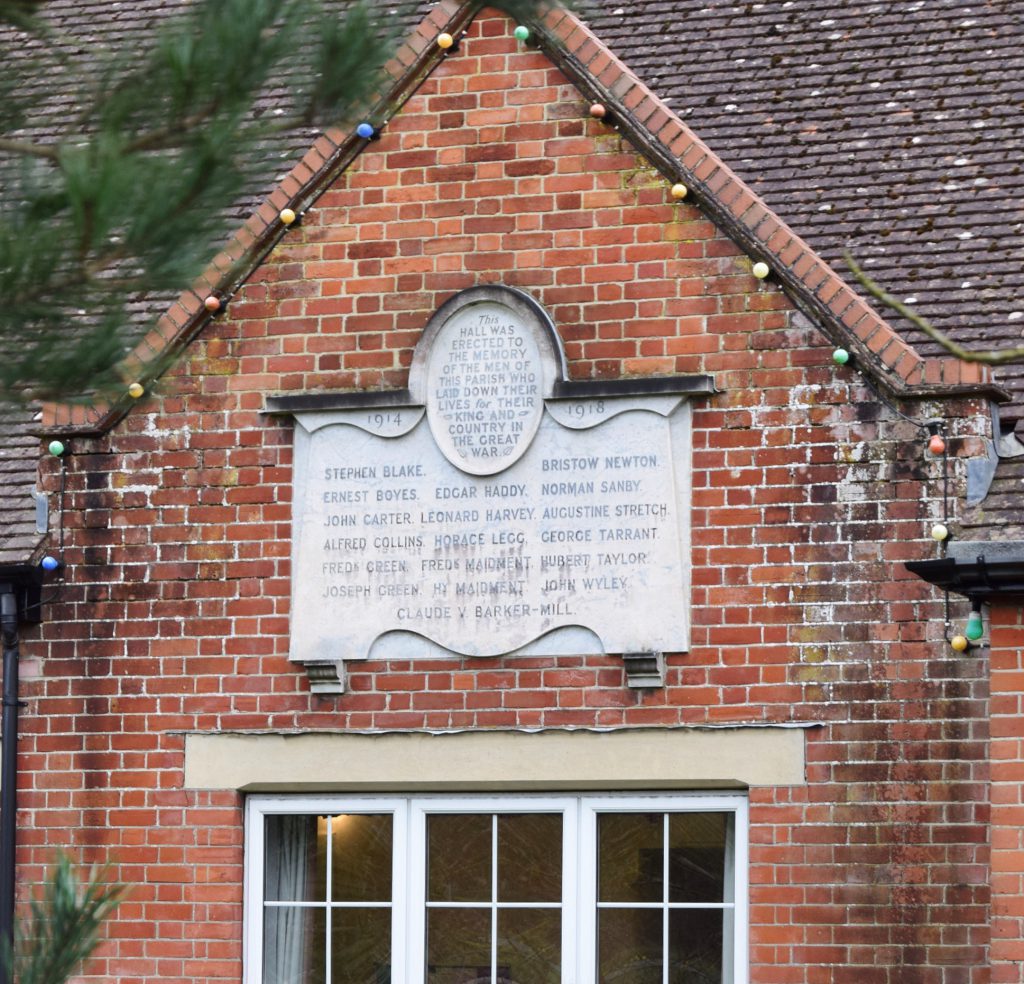 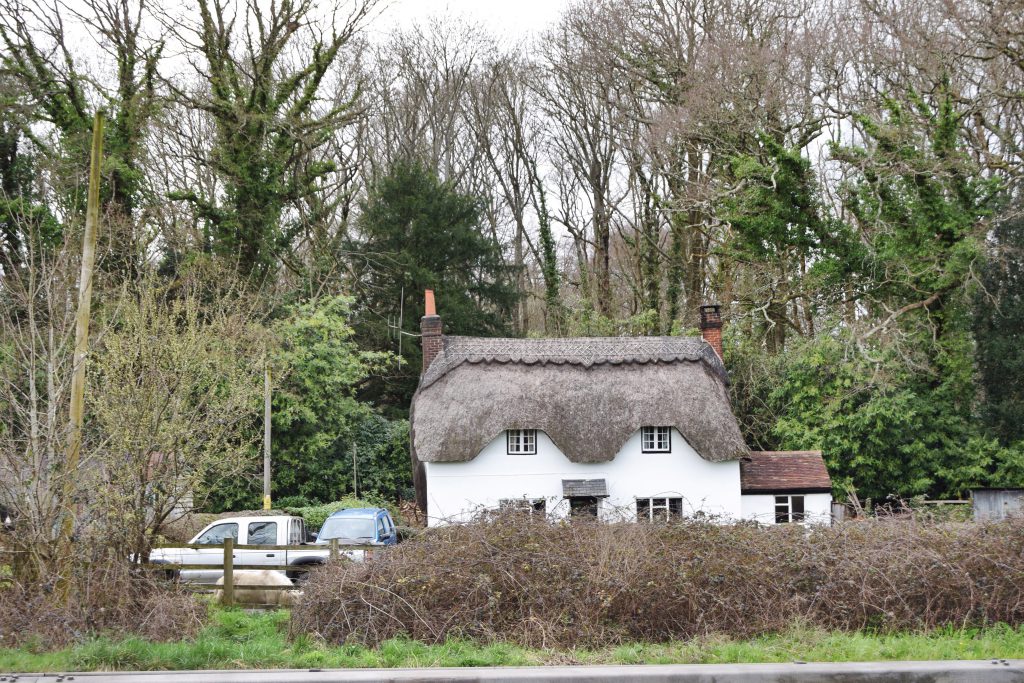 With a final bit of house envy we passed the row of diamond windowed cottages and were back at the pub. Commando was waiting in the car.
“I watched you walking down the hill,” he said. “I could see you were limping even from here. Do you need me to take you to A&E?”
“I’m pretty sure it’s only bruised,” I said, sinking gratefully, if a little painfully, into the seat of the car. 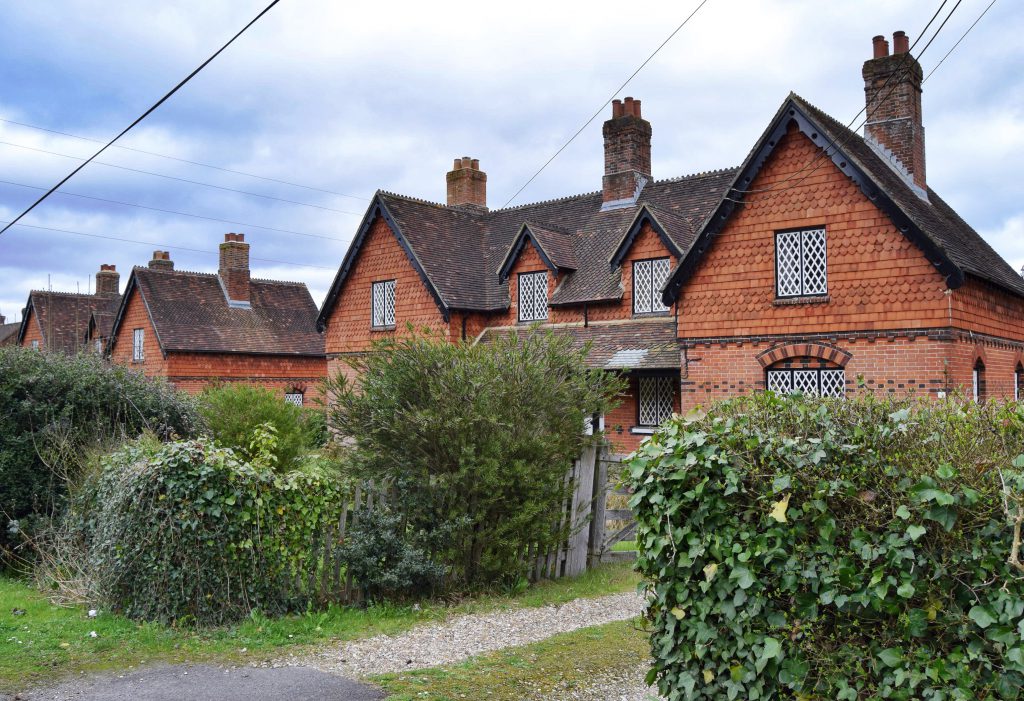 When I started out this morning I was disappointed we were only going to be walking ten miles. Those miles turned out to be far more eventful that CJ or as had expected and, on balance, it was a lovely walk. At the end, after my little tumble though, I was glad there weren’t five more miles to go.

9 thoughts on “Care For a Walk Ashurst to Totton, limping home”