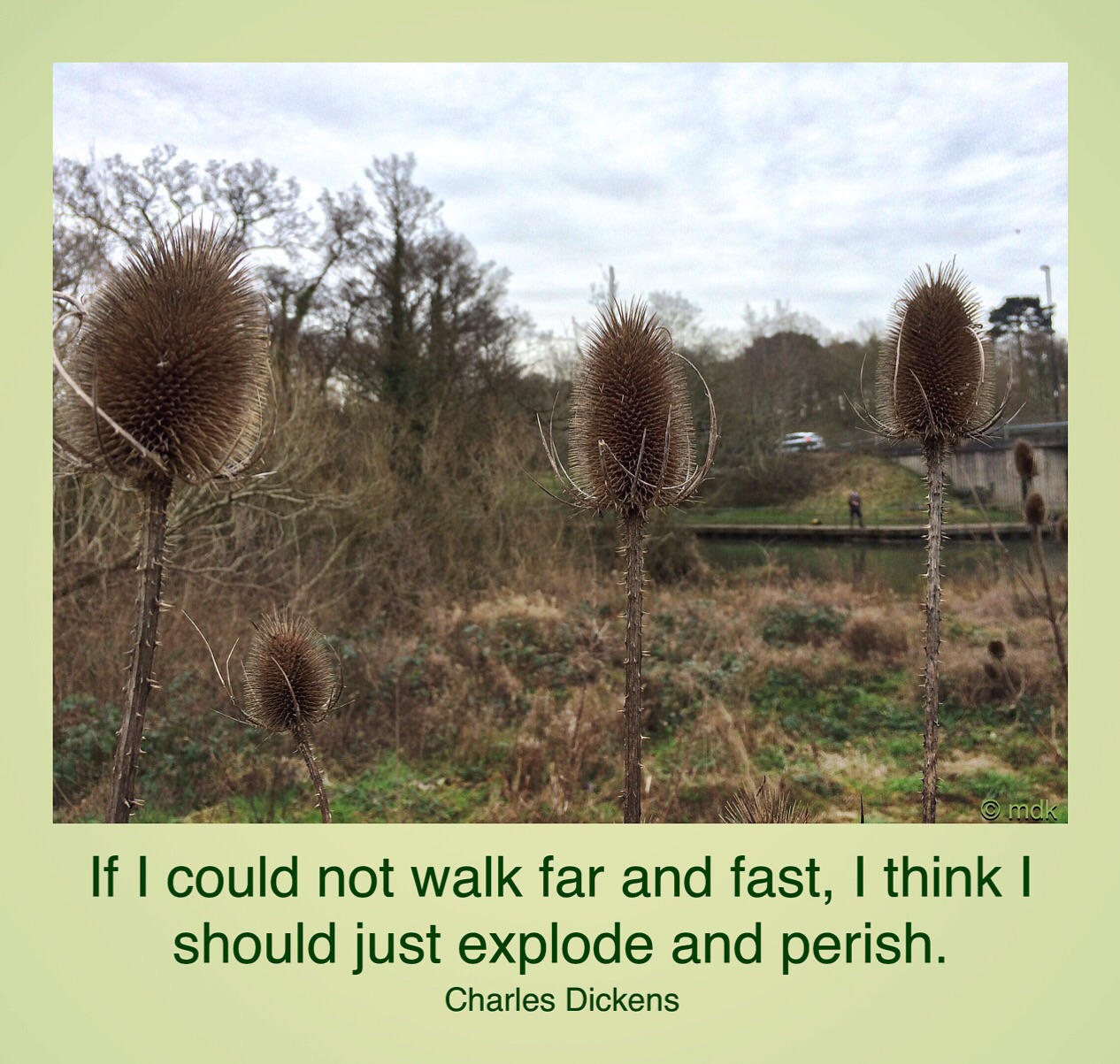 In the end I decided to carry on and walk down to the start of the Navigation to see how muddy it was. It would be handy to know in case I manage to go to Twford in the near future. A little forwarning is always handy and I could always take the road way back if need be but I’d rather not get half way along and have to turn back. Some fishermen looked up as I passed under the road bridge and I wondered how far along the Navigation I could get in the time available.

“You don’t have a lighter do you?” one asked. When I said I didn’t he explained. “We’ve both given up smoking and neither of us brought a lighter for our stove. We’ve been making like Bear Gryls for the last half hour with two sticks but we can’t light a fire.”
“Do you ever catch anything here?” I wondered, “only I always see people fishing but I’ve never seen any fish in the river.”
“Usually we catch lots,” he said, ” but they’re not biting today and we’re cold which is why we’re were trying to make a cup of tea.”

Off I trotted, leaving them to their frantic stick rubbing And feeling a little sorry for them.  With a quick stop to take a picture of some teasels (you know how much I like them), I started down the gravel path towards the Navigation. The fisherman I’d seen by the bridge was setting up on the other side of the river and I wondered if he’d have any more luck there as I walked away.

The grassy area beside the gravel path was covered in small mounds of earth, maybe a mole infestation. Either that or the fishermen have been digging for worms. If that is what moles do to the grass though I can understand why someone would be upset to have one under their lawn. They’d made a terrible mess.

The trail at the end of the gravel didn’t seem too muddy and I thought I might walk a little way along the Navigation, maybe to the motorway bridge. When I opened the gate and climbed onto the bridge crossing the tail of Mansbridge Lock it was soon clear this would not be a great plan. The lock, which is often dry enough to walk in, was filled with water. It isn’t the first time I’ve seen it like this but it usually points to a muddy walk.

On the other side of the bridge I got a good look at the path. It was muddy enough to make me turn back. This part of the Navigation is usually one of the least likely to flood or become impassable but, a little further on, it is muddy at the best of times. Maybe walking the Navigation back from Twyford wouldn’t have been the best of plans after all.

Turning back, a little disappointed that my walk would be ending sooner than I’d hoped, I had an idea. The trail divides just before the bridge over the lock tail and, coming back in the past, I’ve got a little confused and taken a wrong turning. I’ve always realised my mistake quickly and turned around so I’ve never found out where this other trail leads. In all probability it would be a dead end because it seems to head towards the motorway but I thought I’d check it out nonetheless.

From my previous mistakes I did know the trail divided again a little way along. Once, in my early Navigation walks, I’d even taken one of these paths and after a very short walk, ended up on Mansbridge Road. This time I was going to take the other fork and see where it took me. How lost could I get?

It seemed a pleasant path, tree lined and not too muddy. A little Robin played catch me if you can with me, a game he won, although I did get one very blurry photo where you could almost see there was a Robin if you knew exactly where to look. Ok so it was more a fuzzy red dot on the end of a branch but I did try. Then things opened onto a grassy area and I could see water ahead. 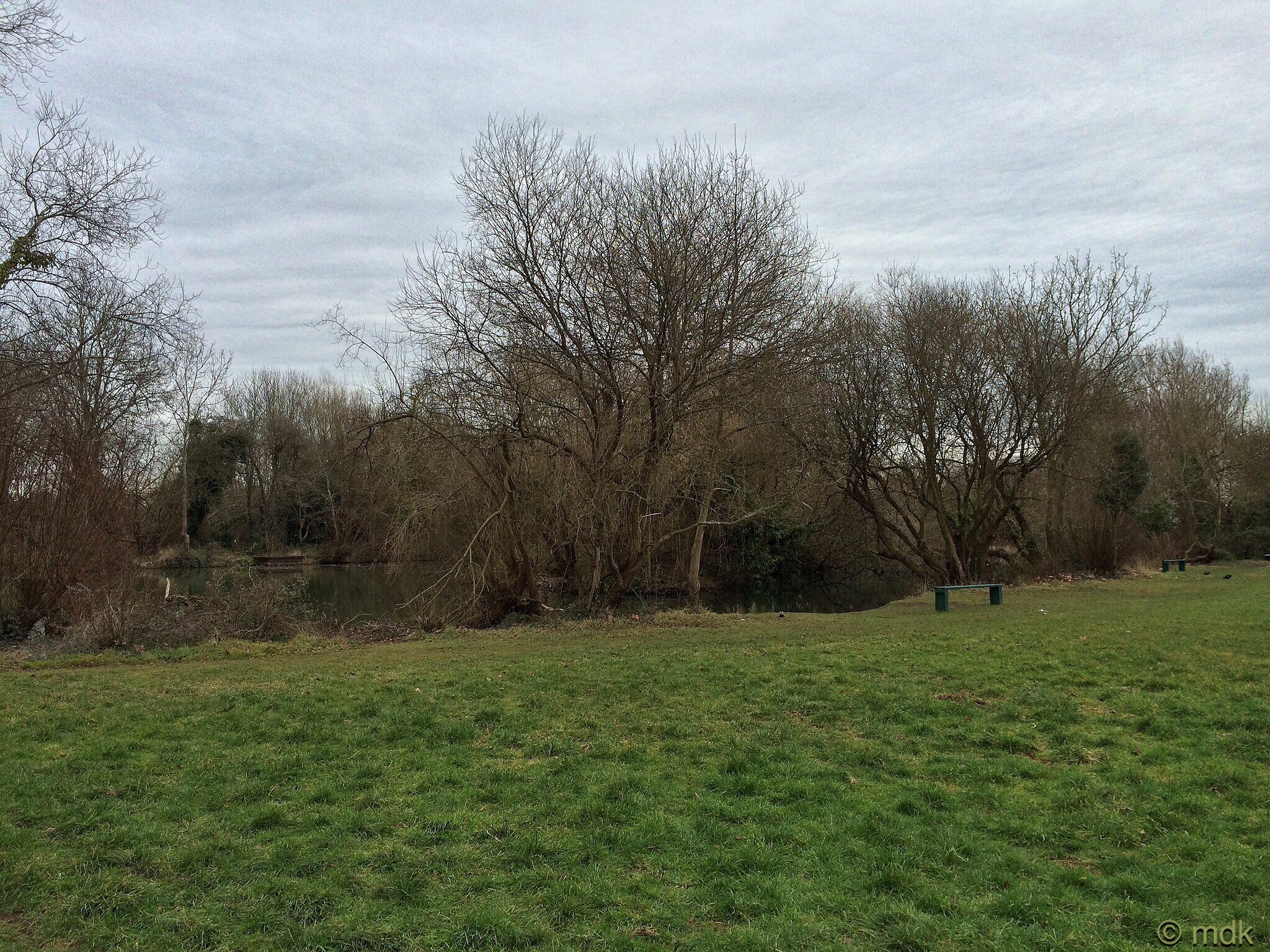 There were benches by the water and, as I got closer, I could see it was a small lake. Either that or there has been more rain than I thought. Slowly I followed the trail around the lake, wondering where I was going to end up. It wasn’t a long walk and soon I came to the point where the two paths meet. Then I was walking out onto Mansbridge Road again a little way up from the point where the Riverside path goes under the bridge.

Across the road I could see the fishermen on the bank, still frantically trying to make a fire. It may not have been much of a diversion but I’m glad I took the unexplored trail and found the little lake. In the summer it might be a nice place to stop off and sit to have a drink and a snack. Who knows there might be other paths there I haven’t noticed yet.

Later that evening, when I was half watching the local news, an item came on that made me think I might have had a very lucky escape by missing my walk around Twford. Apparently, there was an earthquake in Winchester on Tuesday. At first I thought I might have been hearing things because an earthquake is really the last thing you expect in Hampshire. In fact I wasn’t even aware we were on a fault line of any kind. Twyford is just outside Winchester though and, it may only have been a small eathquake, just 2.9, but I’m glad I wasn’t walking there when it happened. They say it could be felt as far away as Bournemouth but the earth certainly didn’t move for me.

13 thoughts on “A new trail and a lucky escape”