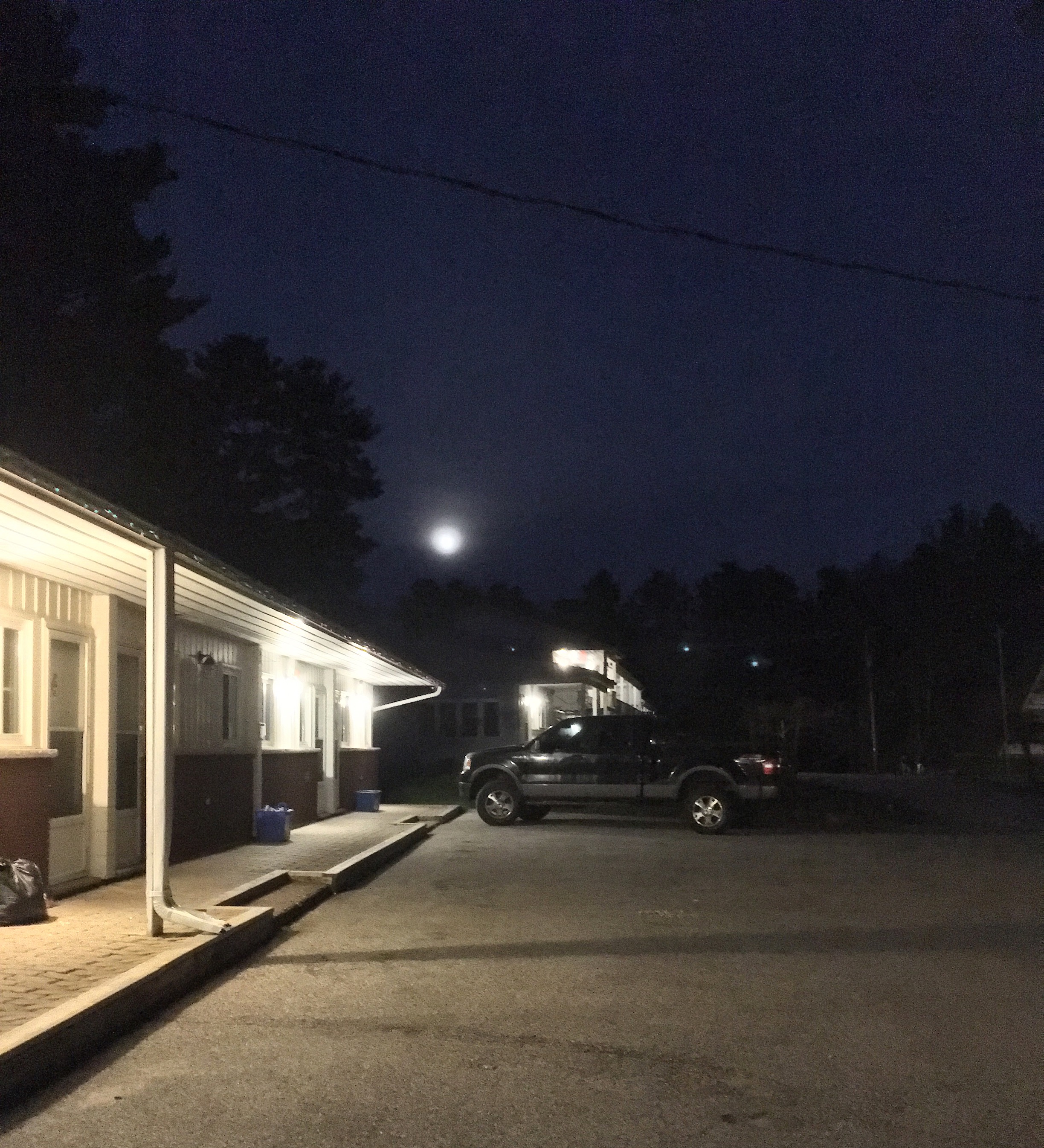 Today was mostly taken up with travelling. This morning Commando woke with swollen and painful hands and a feverish feeling. His leg was still hurting but with the help of the Tylenol, he was able to walk. It seemed to me to be the work of some kind of virus rather than anything to do with the trip in Stanley Park. He limped down to Starbucks for a breakfast of croissant and yogurt parfait. Later we took a taxi to the airport where we sat around waiting for our flight. All the while I was keeping a rather nervous eye on him. He hobbled onto the plane. Five hours later he hobbled back off again. Along the way we’d lost three hours to the time change but at least we hadn’t lost our luggage. We were back to the disoriented jet lag thing again though.

Next we had to collect the hire car. This was the part I’d been dreading and it turned out both better than expected and worse. We thought we’d be picking up the car at the airport but, due to a last minute change we found out about by phone while we were going through check in, we had to go to an off airport car hire place. In normal circumstances this wouldn’t have been much of a problem, although a little. Ore warming would have been nice. With a limping husband it added a lot of stress we could both have done without. There was a great deal of unwelcome walking up and down trying to find out where we were supposed to go, followed by a train journey, a long wait for the car company to pick us up and an even longer wait at the car hire offices. Finally we had a car. It wasn’t the car we ordered. It was a giant of a V8 monster I needed a step ladder to get into. It had all sorts of fancy doodads like a reversing camera. Commando quite liked it. Best of all he could drive it without using his bad leg.

The long drive to Gravenhurst was not without incident. The sat nav in the car kept trying to take us onto Highway 407, a toll road, and we ended up driving in circles trying to get onto Highway 400. Tempers were frayed. Due to the car hire change we were more than an hour later than we’d expected to be. It was getting dark. We were getting tired. Commando’s leg hurt. We were also beginning to get rather hungry.

Eventually we got onto Highway 400 and from there it was plain sailing. We knew the route from our previous visit. A couple of hours later we parked outside the Pinedale Motel. It was after half past ten but, in Vancouver time, it was still seven thirty, what time it was in the UK was anyone’s guess, my internal clock had given up trying to work it out. We may have reached our destination but our day wasn’t over. We still had to find somehwere to eat.

The obvious choice was Tim Hortons about a mile and a quarter away. On any other day we’d have walked, even though it was dark. With the Tylenol wearing off it didn’t seem like a good plan so we dumped our cases and got back in the car. It was quite a relief to see the place was still open when we parked up.

A shadowy figure, dressed in dark, baggy clothing with a hood pulled up, was standing outside the door as we walked across the car park. This was Gravenhurst though, a sleepy little place. We had no reason to be alarmed. When we got to the door this stranger opened it for us. When I looked up to say thank you I almost let out a scream of horror. The stranger was a young girl, probably still in her teens, she had a pretty face but it had the pallor of the grave and was covered in open sores. Her eyes were dark rimmed and dead. We scuttled inside wondering if it had somehow become Halloween while we’d been travelling.

Inside our accents provoked a few questions and soon we were chatting to the man at the till while we waited for our food.
“Is that girl outside alright?” Commando asked, once we’d established we were English, not Australian.
“She stands out there all the time,” he shrugged, “sometimes she comes in with her boyfriend. I think she has a drug problem but I’m pretty sure she’s harmless.”

We ate our food half looking at a leaflet I’d picked up at the counter about events coming up in Gravenhurst and talking about how this poor young girl had got into such a state in such a quiet, wholesome place. When we went back outside she was still standing by the door, looking at her feet.
“Would you like a coffee?” Commando asked.
“Really?” She looked up. Her poor ruined face a picture of surprise.
“Yes really,” Commando put a few dollars into her hand, just about enough for a coffee but no more. We didn’t want to encourage her drug habit.
“Thank you very much,” she folded the coins into her tiny hand.
We’d both half expected her to walk away and keep the money to put towards her next drug purchase. When we got to the car it was gratifying to see her standing at the counter inside.
“Oh well, I guess that’s good karma for me,” he said.

Getting back to the motel should have been easy. Last time we were here Maggie leant us her car and we’d made the journey lots of times. Darkness, tiredness, an unfamiliar car and driving on the wrong side of the road played a part in what actually happened though. We left the Tim Hortons car park, turned right onto Muskoka Road South and then, instead of turning left onto Bethune Drive, turned right onto the Highway 11 sliproad. We both realised straight away but it was too late to do anything about it.

So now we were on the Highway heading back towards Toronto with no idea how to get off it again. The next half hour is best forgotten. Commando kept driving, getting angrier and more desperate while I tried to look at the signs on the side roads as we sped past. With no idea where any of them led turning off wasn’t an option and, unlike English roads, there were no handy roundabouts, just a concrete barrier between us and the direction we wanted to be travelling.

After about thirteen kilometres I saw a sign I thought said turn off for Highway 11 North but, by the time I’d properly registered it, we’d already gone past. When I tried to tell Commando he snapped angrily, “we’ll be back in Toronto soon at this rate.”
Eventually, twenty two kilometres after we’d left Tim Hortons, I saw another sign for a turn off, this time in time to get onto it. Maybe if we both hadn’t been so tired and emotional we might have thought to use the sat nav and avoided a forty four kilometre detour.

Getting back to the Pinedale Motel was a relief to say the least. Well it was until Commando couldn’t find his phone. A frantic search ensued. Slowly it dawned on us that he must have left it in Tim Hortons. Accusations followed.
“I gave it to you to look after in Tim Hortons.”
“I’m sure I gave it back to you.”
“Obviously not. So much for good karma. That girl has probably sold it for drugs by now.”
“Well there was nothing on the table when we left apart from the pink leaflet I was reading. I remember looking.”

So, once again, we got into the giant car and drove off into the night. Back at Tim Hortons I stayed in the car watching Commando limp across the dark car park. When he disappeared inside I put my head in my hands and thought about the electronic boarding passes for our flight home on the lost phone. When I looked up again Commando was coming back through the darkness. It was too dark to see his face.

He got into the car, his face inscrutable.
“Did you find it?” I asked, not feeling very hopeful. The way our luck was going lately I was sure the answer was no.
He waved the phone in front of my face. “You are both the villain of the piece and the hero,” he said. “You put that stupid pink leaflet on top of my phone so I didn’t see it when we left. It also meant no one else saw it and took it though.”

It was well after midnight, Toronto time, when we finally laid down on the beds in the Pinedale Motel. It had been a long, long day. It hadn’t been the best of starts to our Toronto adventure for sure. As I drifted off to sleep I couldn’t get the poor young girl’s face out of my head.

8 thoughts on “Travel, Toronto and a comedy of errors”