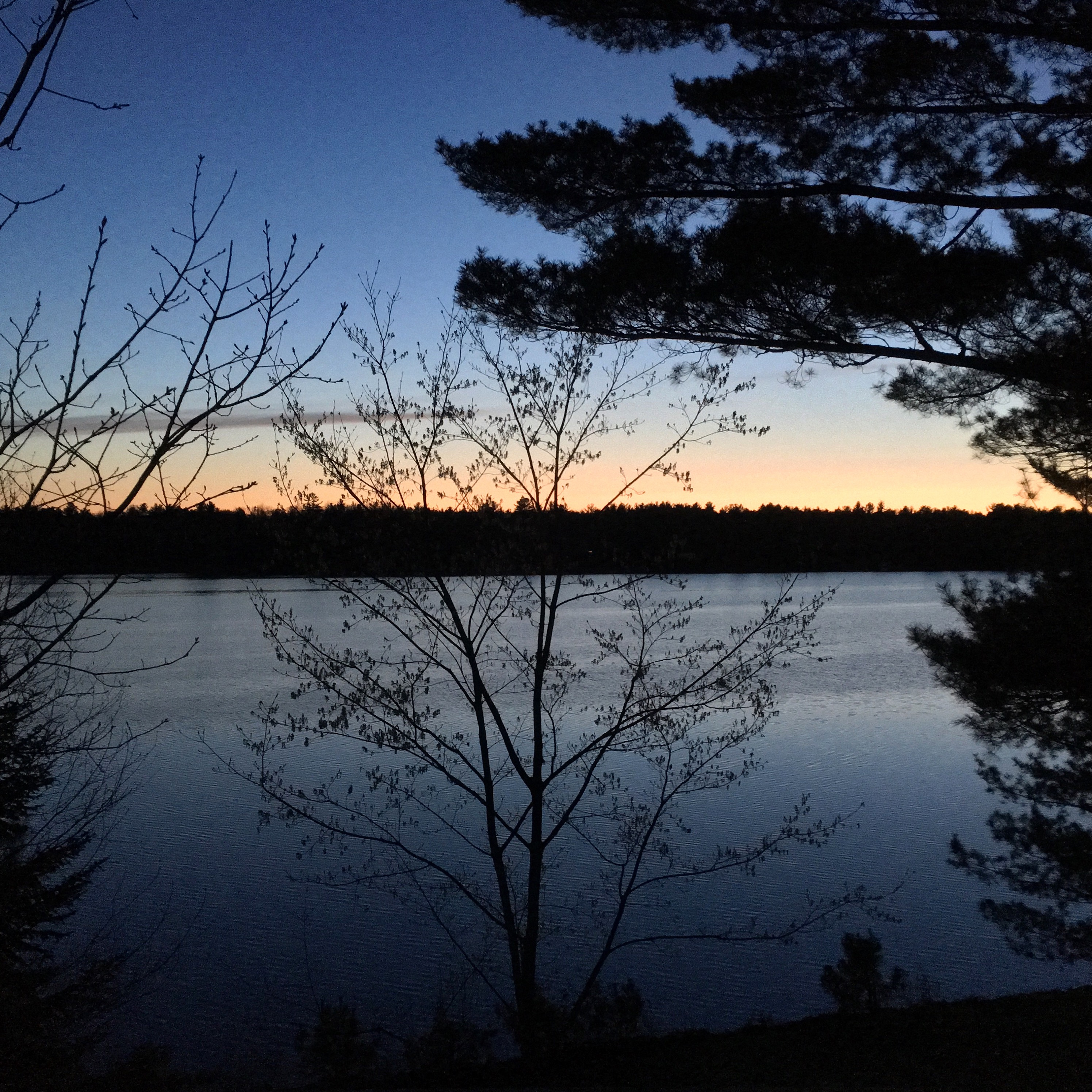 After a wonderful week in Vancouver we’d had a nightmare forty eight hours. When I woke at five fifteen this morning though, the view from my window chased the nightmare away immediately. A peachy glow lit the sky above the pines on the opposite side of Gull Lake, fading to a deep midnight blue. The trees outside our window were silhouetted against the glorious pre dawn sky and the lake gently rippled by the breeze. Commando was still sleeping but I sneaked out of bed and took a photo through the window then I lay watching the sun slowly rise. After a while I pulled on a jumper and crept out onto the balcony. Sometimes jet lag has its advantages and waking to watch the sun come up is up is one of them.

It was far cooler than Vancouver but the jumper and the woolen wrap I’d grabbed helped. There were Canada Geese on the grass below with fluffy little goslings. I leaned over the balcony watching them, annoyed I’d left my camera inside but loathe to open the door again in case I woke Commando. He needed all the sleep he could get. Eventually he woke up and joined me. We sat for some time enjoying the beautiful view and exorcising the horrors of yesterday.

Eventually the chill drove us back inside. The first item on the agenda, after getting clean and dressed, was breakfast. Commando’s hands were swollen again and his leg was still painful but a little better so we took the giant car to Tim Hortons. I half expected to see the strange girl still standing by the door but she was gone.
“She probably only comes out at night,” Commando said. “She didn’t look like she got a lot of sun.”

After a leisurely breakfast we drove under the gate with the sign ‘ Gravenhurst – Gateway to Muskoka Lakes’ and headed to Maggie and Alan’s house. We found them sitting in the front garden enjoying the sun. More chairs were found and we joined them. There was coffee, home made cake and a lot of chatting. Maggie gave me a tour of her lovely garden. 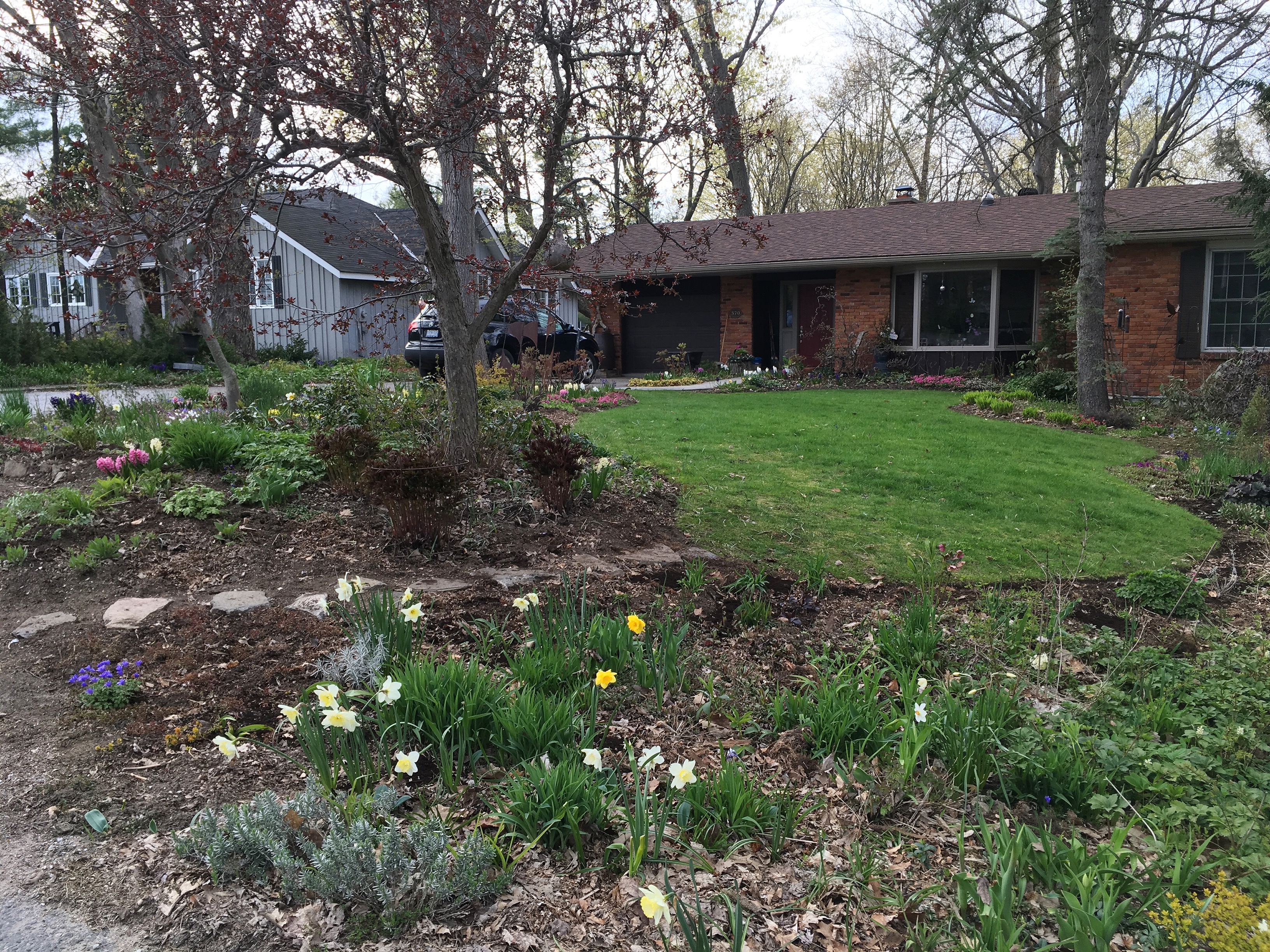 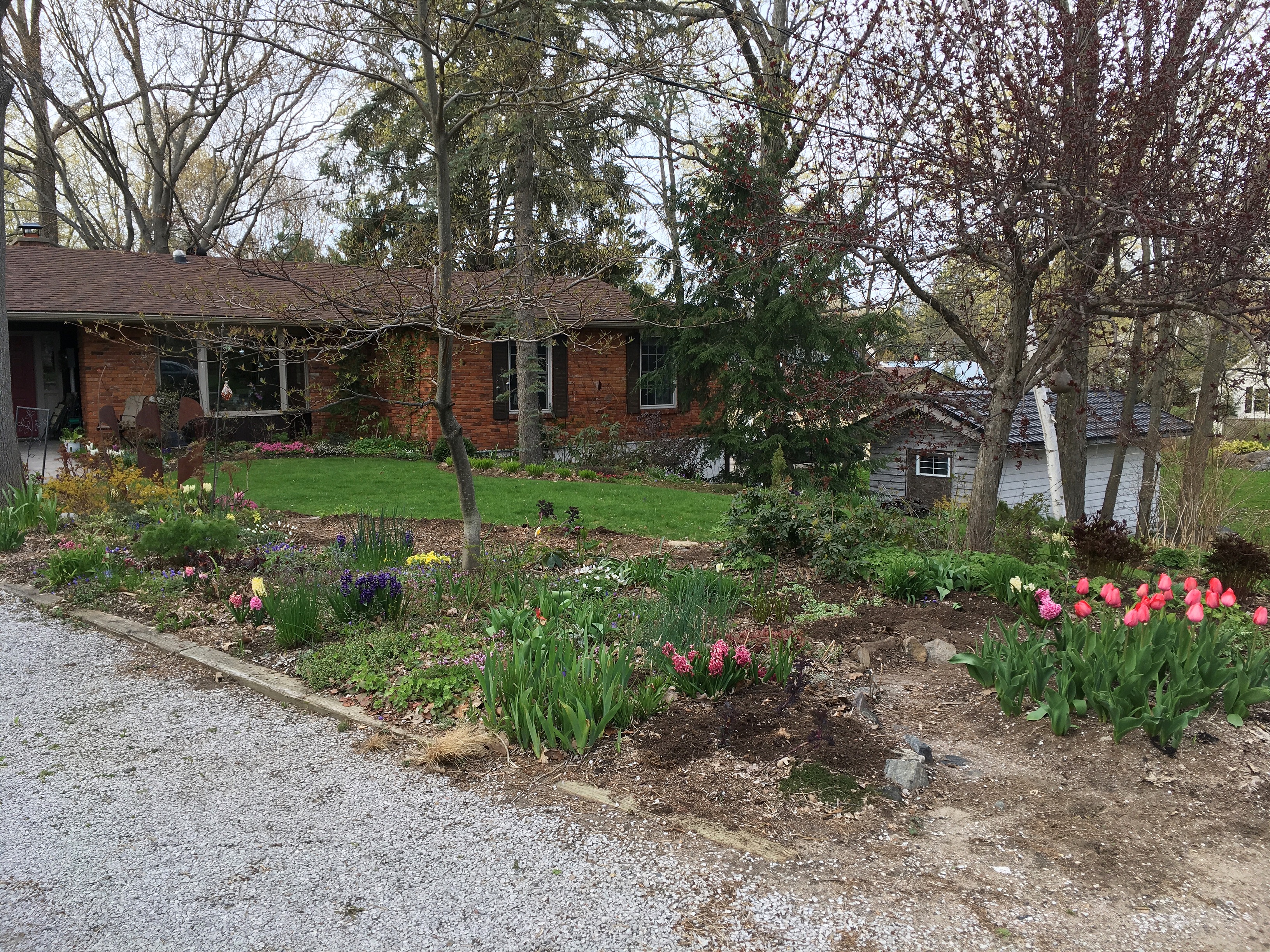 Originally our plans had been to go walking on some of the local trails but Commando’s leg meant this wasn’t the wisest of moves. Alan suggested a drive instead with a little stop off at Torrence Barrens Dark Sky Preserve to stretch our legs. When we were last here it was autumn and every tree seemed to be a glorious flame. As we drove through the Muskoka countryside it was soon apparent that spring was almost as colourful with the acid greens, yellows and reds of the new leaves just beginning to unfurl. I itched to take photographs but, of course, we were in a car, speeding past so I couldn’t.

The name Torrance Barrens counjors up a stark, barren Place. Almost five acres of smooth, undulating rock, scoured of soil by the emense glacier as it slowly ground across the land during the last ice age. This is the Canadian Shield, made up of volcanic rock formed two and a half billion years ago. The bedrock stretches from the Great Lakes to the Arctic Ocean and is mostly covered by a thin layer of soil. When we arrived, it was obviously anything but barren. The exposed rock still bore the scars of the jagged ice but it sparkled as if a billion stars were trapped beneath it. 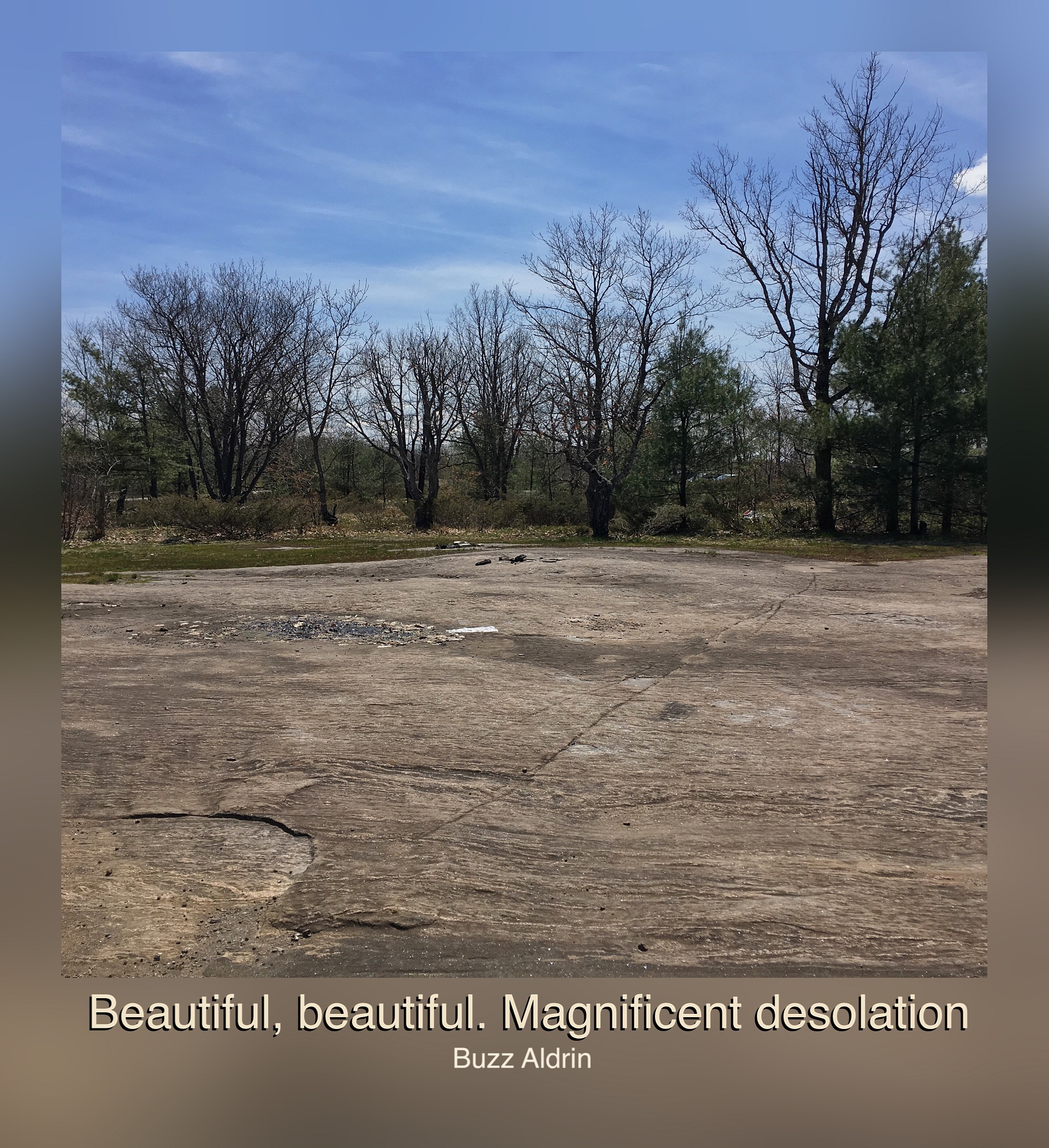 The giant glacier may have scraped away the soil but, over time, nature has reclaimed some of the rock. In water filled dips and remnants of soil in crevices little plants took hold, mostly moss, liverwort and lichen. As these grew larger, grasses and tiny shrubs took advantage, the detritus of fallen leaves gradually created more soil and, eventually, larger plants and small trees found a home. Looking around it was easy to see this process in action. Patches of moss and lichen clung to the rock wherever they could find a foothold. Larger areas held islands of shrubs and stunted trees amid mossy margins with tufts of grass. Glacial erratics provided shady spots where fallen leaves could gather and decompose, creating more precious soil. 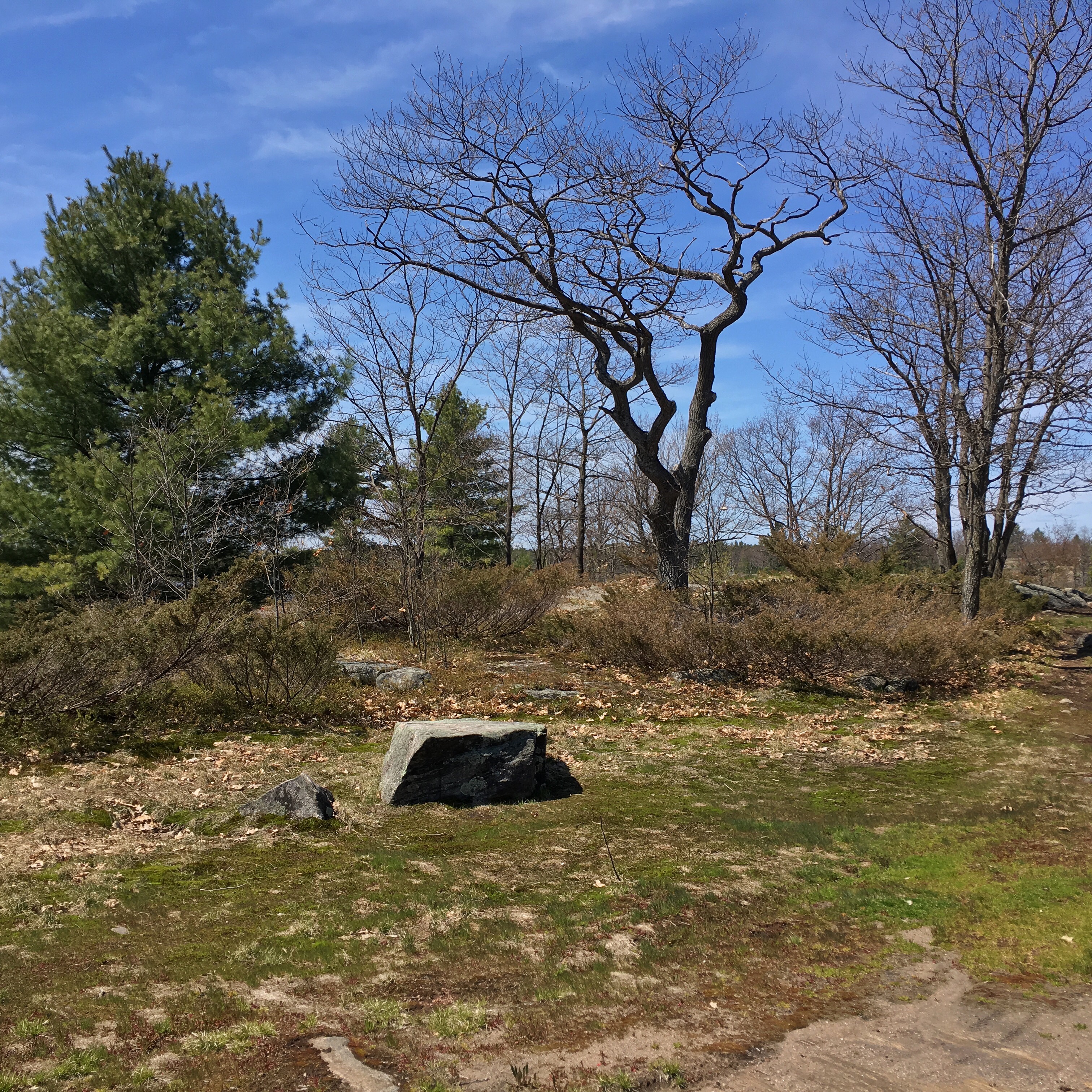 In hollows water has gathered to form small puddles, ponds and lakes with names like Mossy Lake, Highland Pond and Pine Lake. Almost five hundred species of flowering plants live in this supposedly barren landscape. The variety and diversity of flora is a habitat for around a hundred and fifty species of birds, mammals, reptiles and amphibians. Some of these are rare or endangered, like the Eastern Hognose Snake, the Eastern Massasauga Rattlesnake, the Southern Bog Lemming and the Five Lined Skink, Ontario’s only lizard. Something scuttled across our path as we strolled across the rock. It might have been a lizard but it was too quick to be sure. 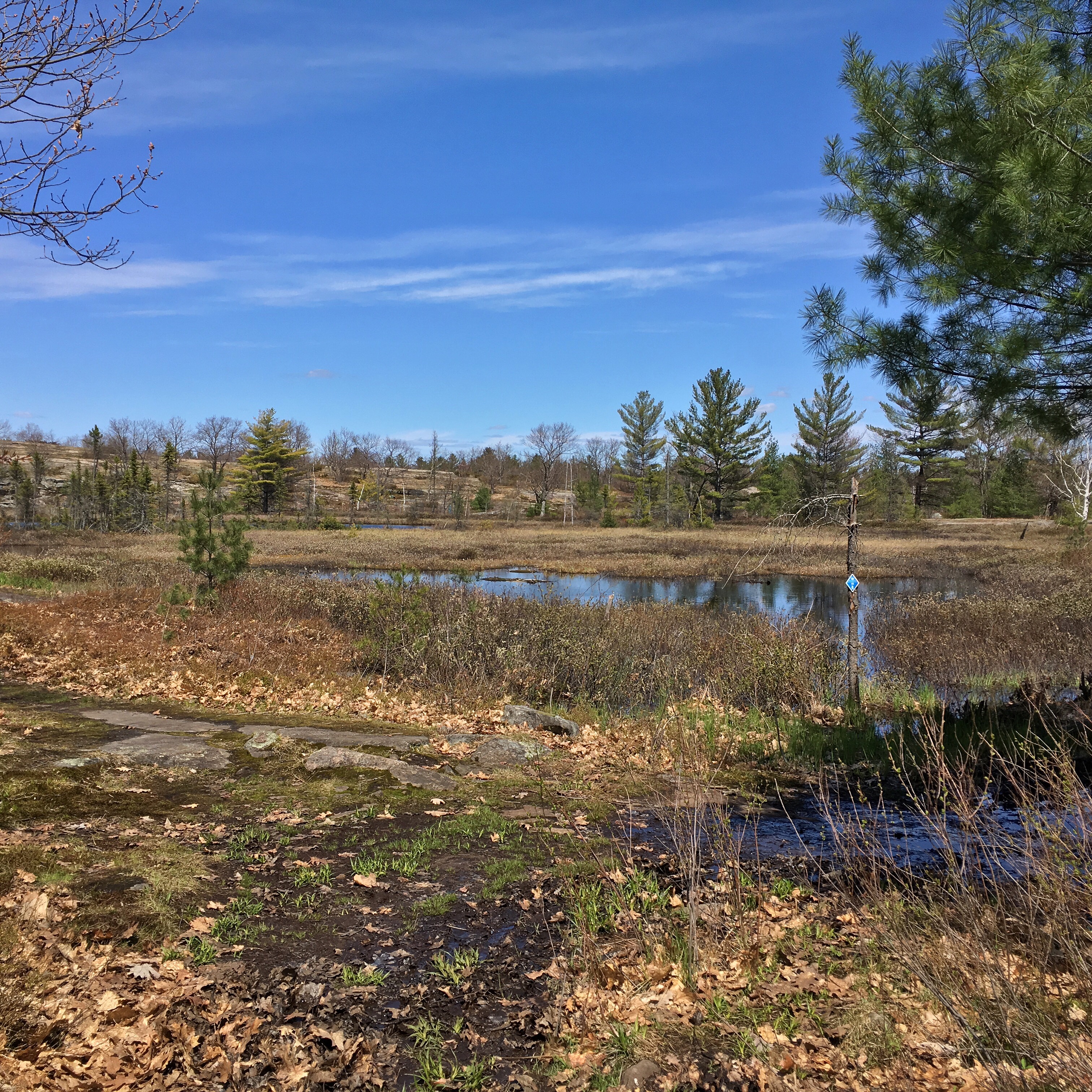 In the mid 1980’s The Ministry of Natural Resources proposed protecting the area and, in 1997 it became the Torrance Barrens Conservation Reserve. Pretty soon it was obvious it was more than just a nature reserve. The perfect combination of remoteness from urban light sources, low growing vegetation and no hills to obscure the view made this a wonderful place to view the night sky. What’s more, the hard granite surface and the open areas with three hundred and sixty degree views were ideal for telescopes and night photography. In 1999 the Ontario government designated it the world’s first Dark Sky Preserve. 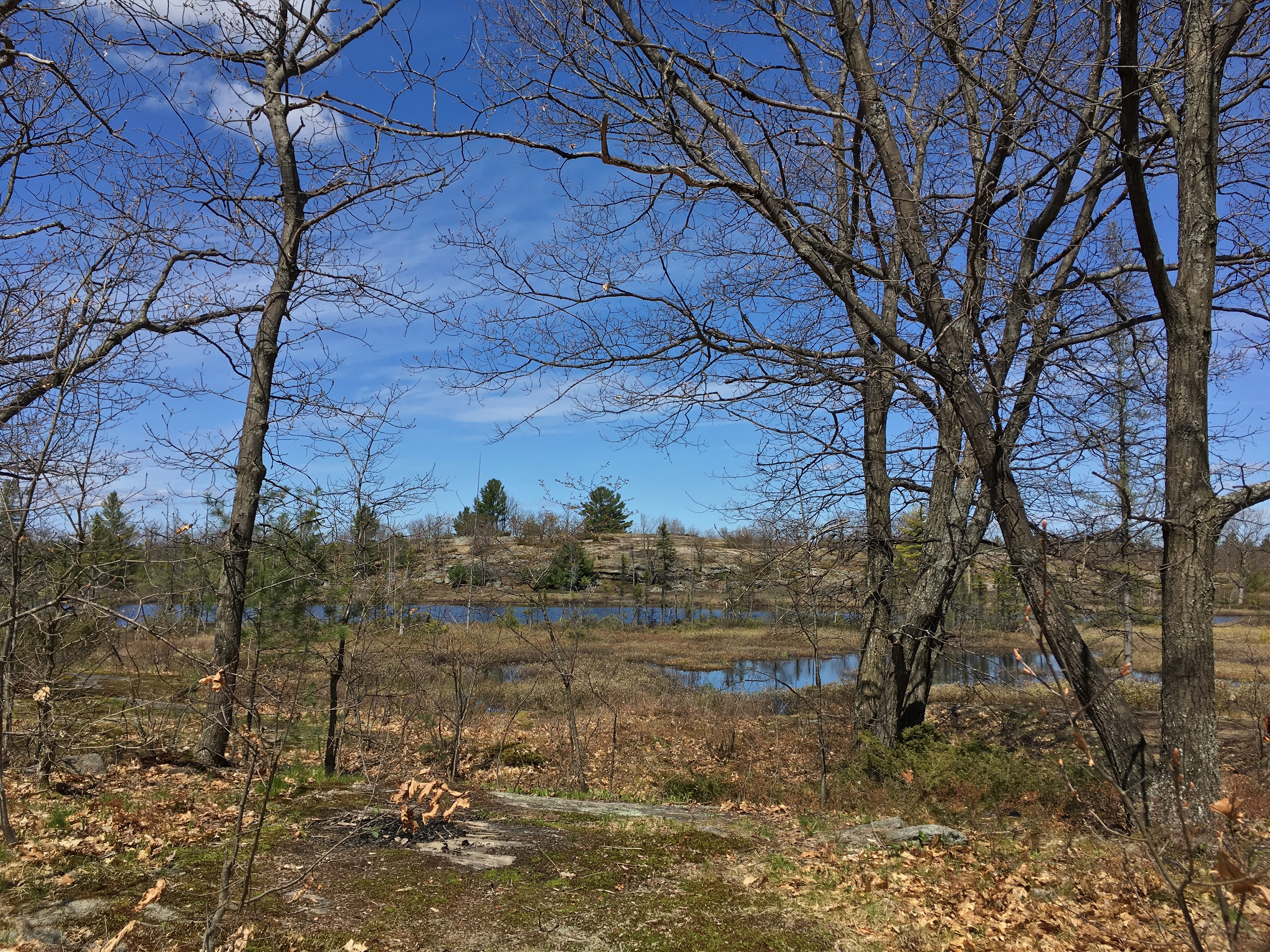 Of course it was spring so there was no chance of seeing the aurora borealis although it can sometimes be seen later in the year. It was also day time so we couldn’t see the stars, but they seemed to be there, trapped twinkling from beneath the rock we walked on. On a different day we might have walked some of the trails. There are three and they are well marked so even I probably wouldn’t have got lost. Unfortunately, Commando’s leg wasn’t really up to trail walking though. 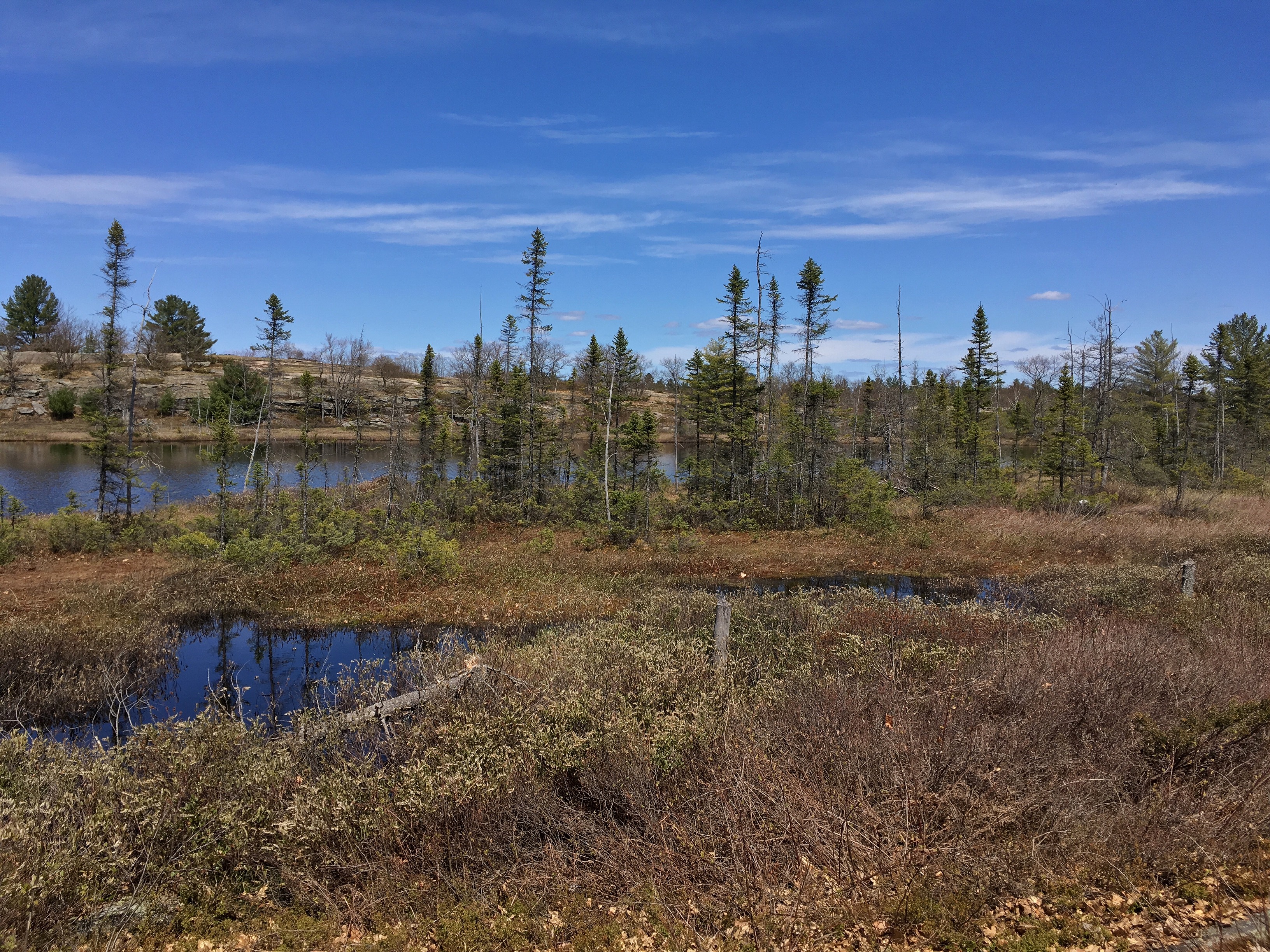 We wandered on the sparkling granite for a while drinking in the peace and beauty. Then we got back in the car and headed to Orillia where we bought a takeaway lunch from the Mariposa Market and sat in the parks by Lake Couchiching to eat. We took the scenic route back to Gravenhurst along winding roads littered with huge boulders the size of trucks and trees decked out in fresh spring colours. Through the window of the car we saw beaver dams, little houses half hidden amid the trees and wonderfully crumbling wooden shacks I longed to photograph.

We barely saw another car although, for a while, we did follow a huge truck that seemed to be weaving all over the road. There was quite some discussion about whether the driver was the worse for alcohol or lack of sleep. Thankfully he turned off after a while and we were back to being alone.

Back in Gravenhurst Commando and I took a walk to the local shops to pick up basic supplies for tomorrow’s breakfast. There are only so many Starbucks or Tim Horton’s breakfasts a person can bear after all. The sleepy little high street filled with shops, churches and a rather grand Opera House was familiar from our last visit. We took our time, partly from necessity due to Commando’s leg but also to enjoy the early evening sun. It may not have been the sort of day we envisioned when we planned our visit but it was certainly a lot better than I’d expected when we left Vancouver. 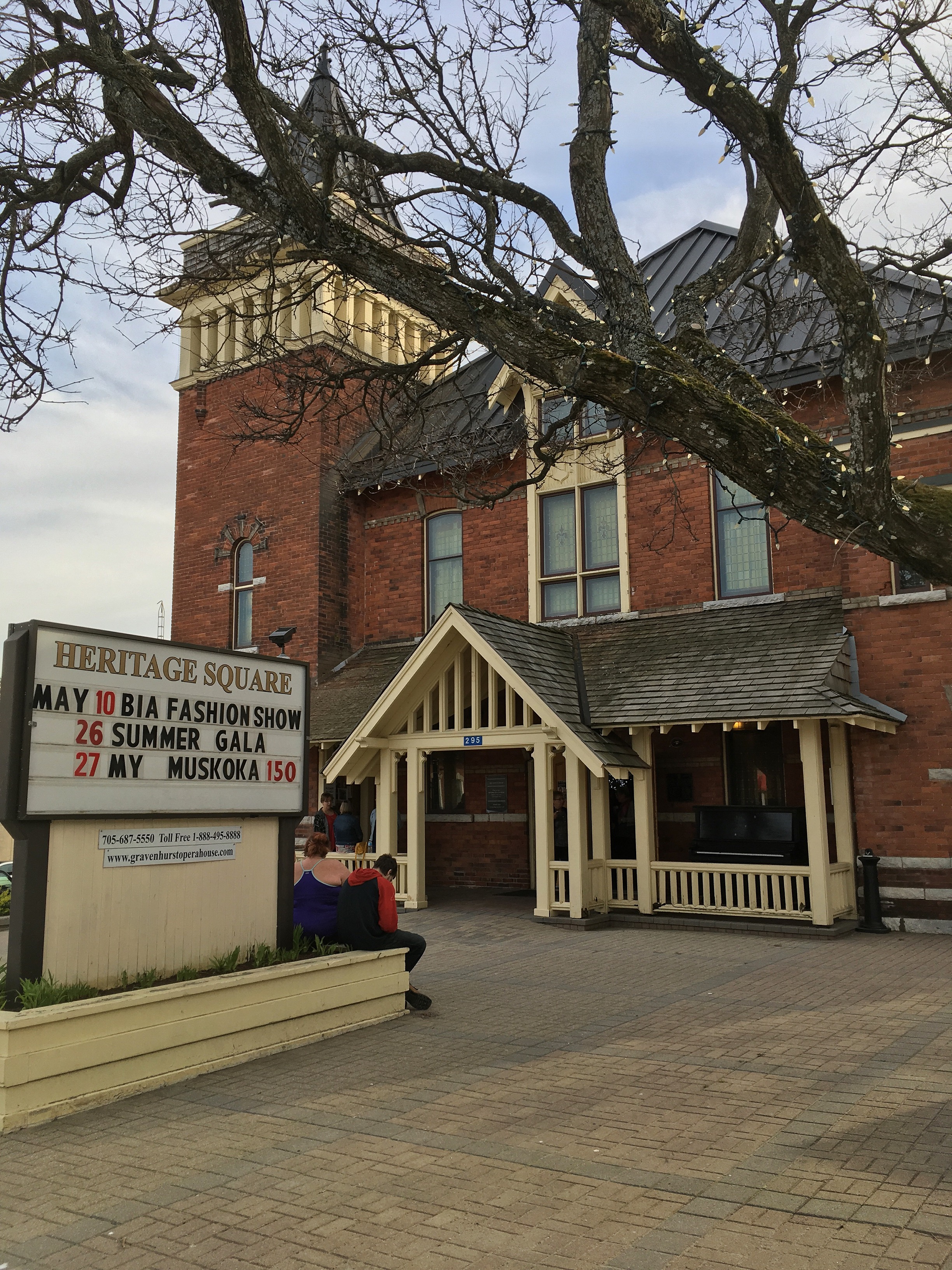 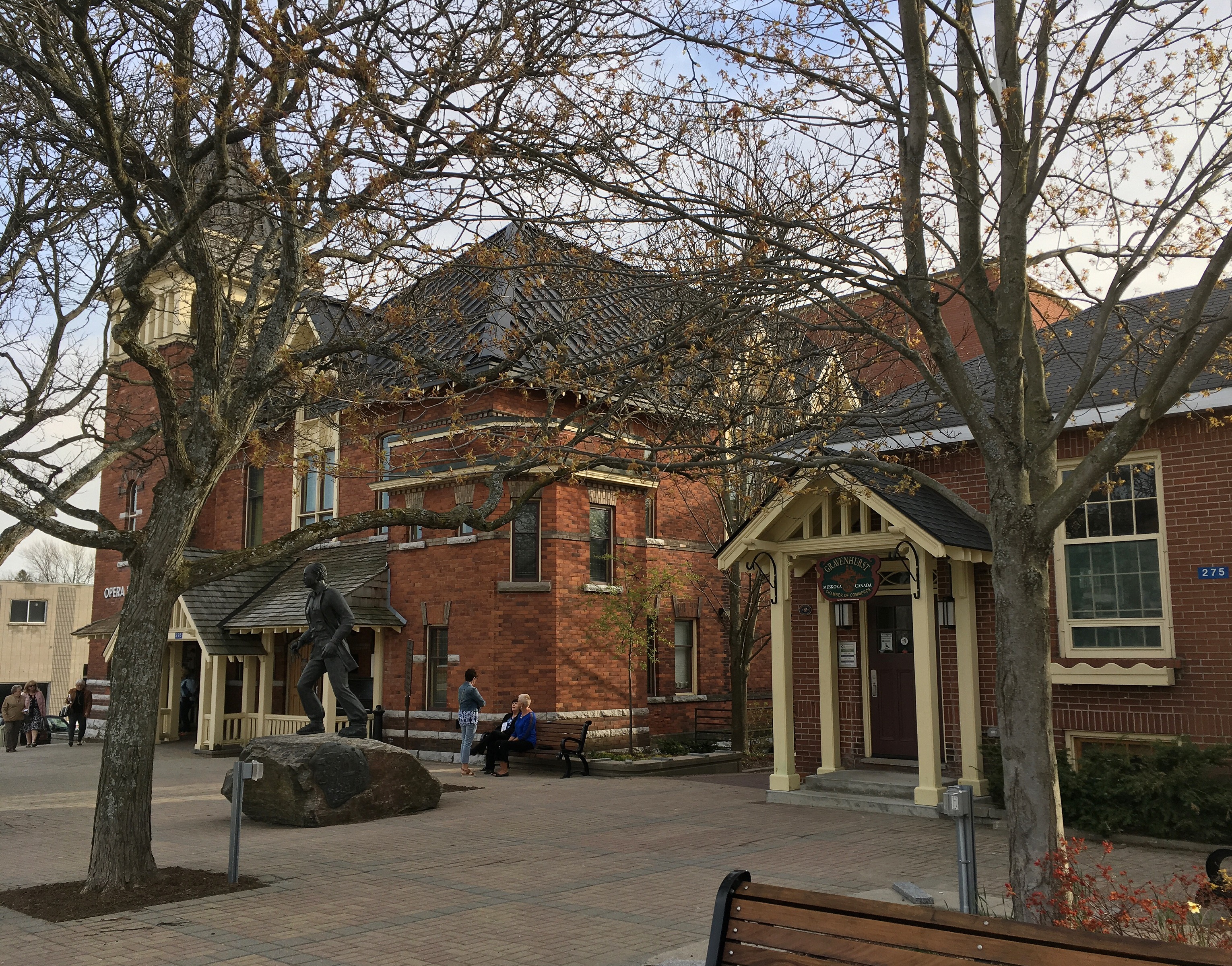 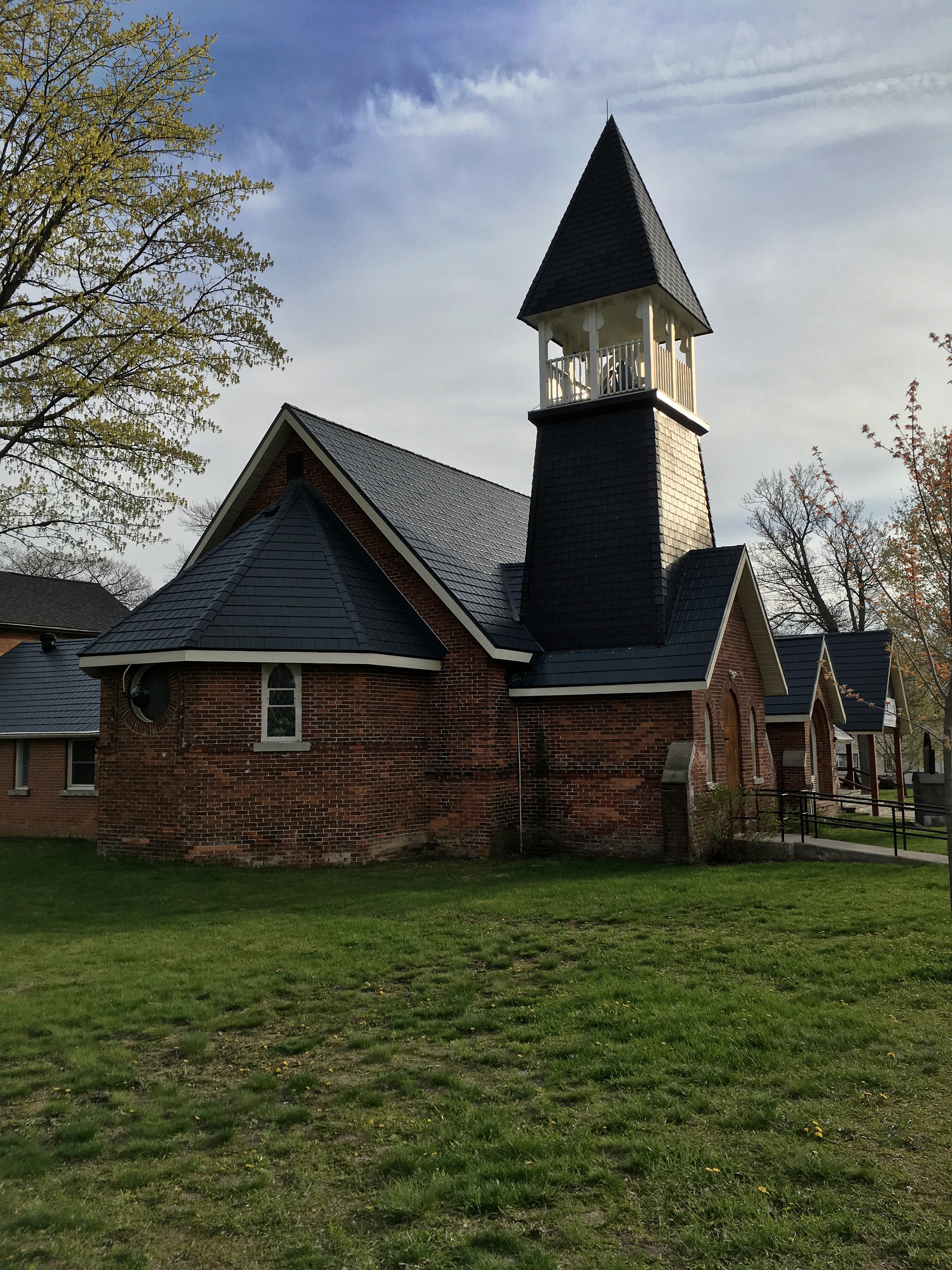 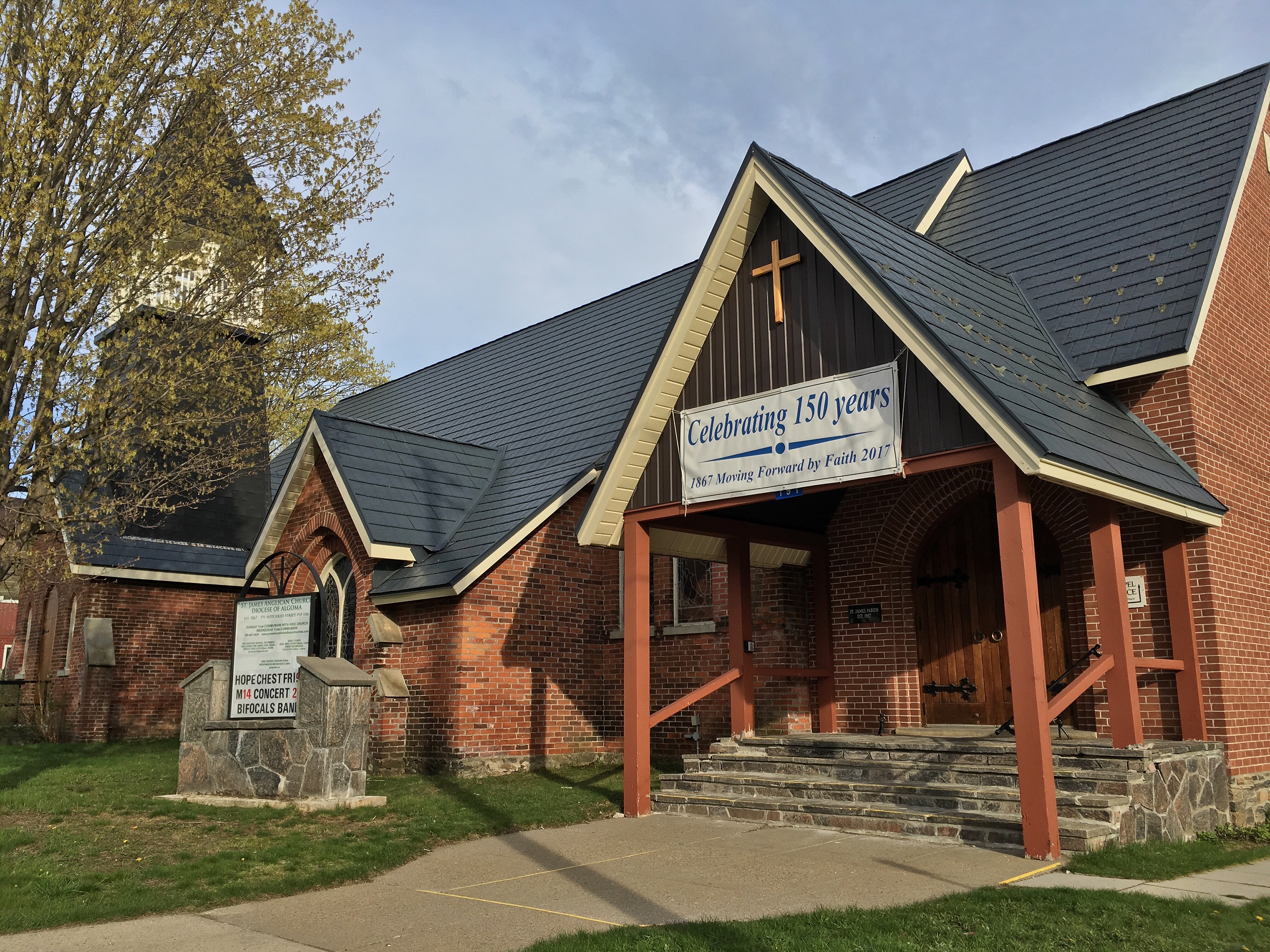 6 thoughts on “A little tour of Muskoka”