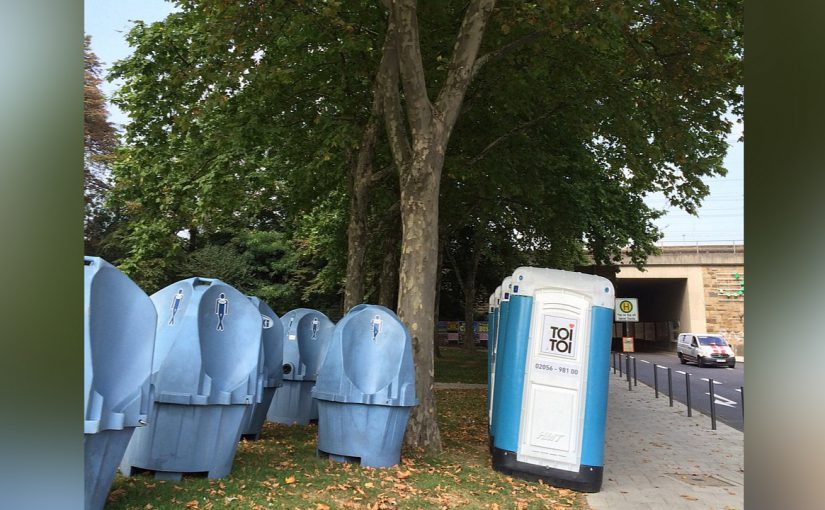 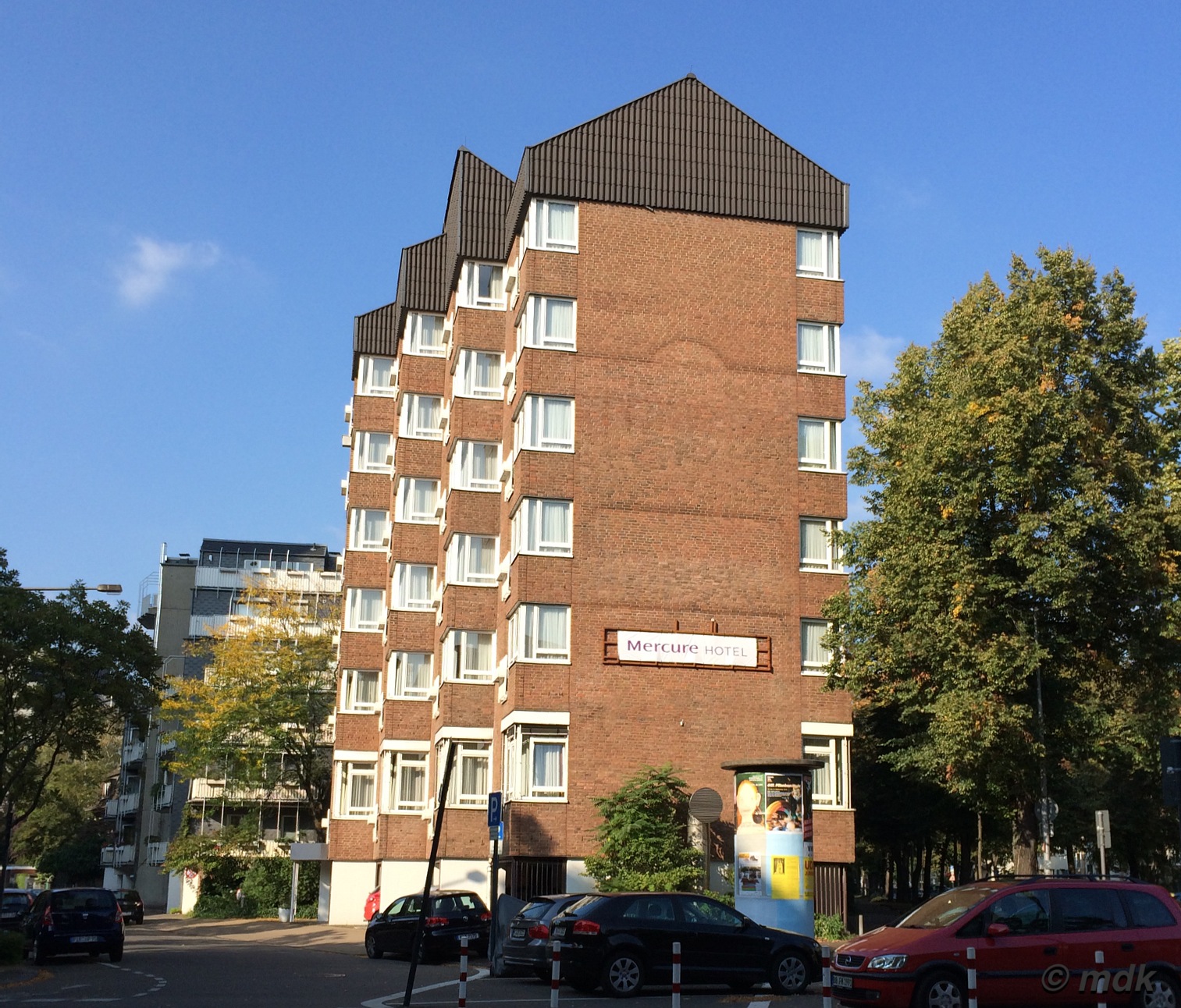 In September 2014 we were off to Cologne. Commando was going to run the Cologne Marathon and I was looking forward to exploring a city I hadn’t seen for thirty years or more. The sun was coming up as we boarded the plane, orange skies competing to outdo the orange Easyjet plane. Thankfully it was only an hour flight so it seemed as if we’d hardly taken off before we were landing.

Cologne airport, or Köln as it is correctly called, was not quite the well organised example of a German efficiency we’d expected but we got out eventually. A very expensive taxi took us to our hotel. It seems everything in Germany is way more expensive than expected. The hotel, The Park Inn, is part of the Mercure chain. It has the bonus of free wifi, which is nice. Strangely, rather than a chocolate on our pillow there was a packet of small jelly frogs. Maybe it’s a German thing?

Once we’d unpacked our stuff and sorted out the codes for the free wifi we went out in search of the Running EXPO where Commando had to pick up his chip and special running bag. The hotel reception man had been pretty helpful in that respect. He gave us a map (another one to go with the two we’d already bought in Southampton) and showed us exactly where to go. It was walking distance, about thirty minutes he said, so off we went.

It took a few minutes to get our bearings but before long we were fairly sure we were going towards the River Rhine which is where we were meant to be heading. There was a pretty little park and, soon after, we could see the river. The problem was there seemed to be lots of bridges and we weren’t exactly sure which one we were after. What we did know was it was near the cathedral so, once we spotted the spires in the distance, we headed towards it.

We found some steps that led right down beside the Rhine. There were hoards of school children walking in groups and so many cyclists it felt a little like a game of chicken. We could see trains going over the bridge so it seemed this might not be the right bridge after all. As we came closer though we could see steps leading up and a pedestrian walkway alongside the train rails. Cologne cathedral was right there behind the bridge. When I was last in Cologne the cathedral was ensconced in scaffolding. Sadly, it still is, although I doubt it is the same scaffolding thirty odd years on. The warm sun had Commando a little worried but I pointed out he still had two days before the race and the weather could change by then.

The bridge, it turns out, is Hohenzollernbrücke. Originally it was both a railway and road bridge, built between 1907 and 1911 after the old Cathedral Bridge, Dombrücke, was demolished because it was no longer able to cope with the volume of traffic. The new bridge was one of the most important bridges in the country during World War II and, as such, came under almost constant attack by allied bombers. It was damaged but still stood fast until 1945. When the allied troops began their assault on Cologne, the Germans themselves blew it up.

The post war reconstruction was, in typical German fashion, fast and efficient. By 8 May 1948 the bridge was open again. Two new tracks were added in the 1980’s and today one thousand two hundred trains cross its quarter mile span daily. It is, arguably, the most used bridge in the country and certainly one of the most important, connecting Köln Hauptbahnhof (Central station) and Köln Messe/Deutz stations.

The railings of the steps leading up to the bridge were almost completely entwined with some kind of climbing plant, possibly bindweed. Whether this was purposely allowed to grow or not I don’t know but I liked it. There was also a very clever metal ramp running up each side of the steps just wide enough for cyclists to wheel their bikes up. Unfortunately this made walking across the bridge a game of chicken as, in Germany, the cyclists seem to think they have right of way everywhere. Maybe they do?

At the top we turned to find almost the whole length of the wire fence between pedestrians and rails covered with love locks. Apparently, since 2008 when these things began to gain popularity, people have been attaching love padlocks to the fence. A Dutch band called Nits (maybe it doesn’t mean the same thing in Holland) even wrote a song ‘Love Locks’ about it. I’d heard of these love locks before but these were the first I’d seen. They made me wish I’d brought a padlock with me. 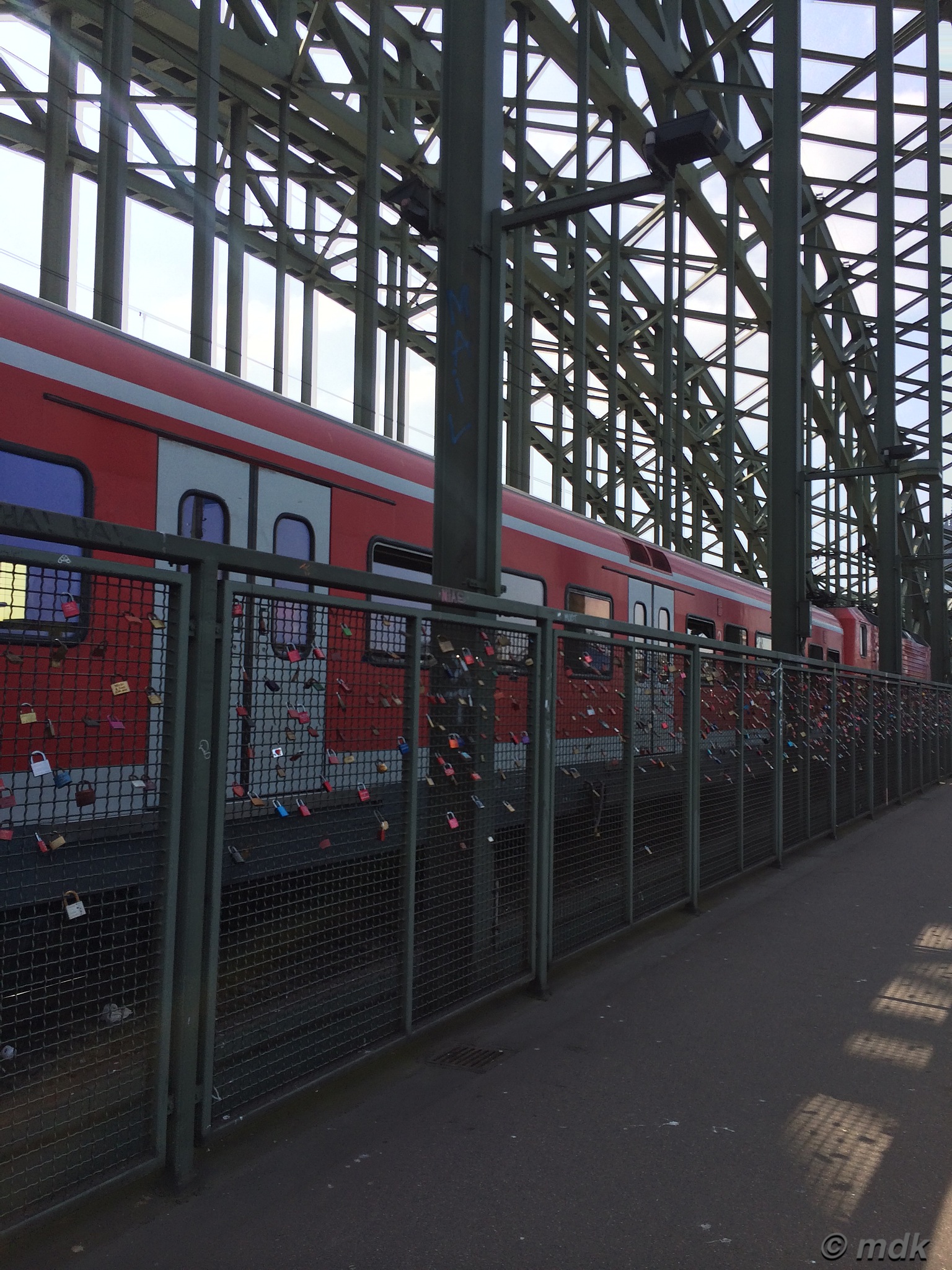 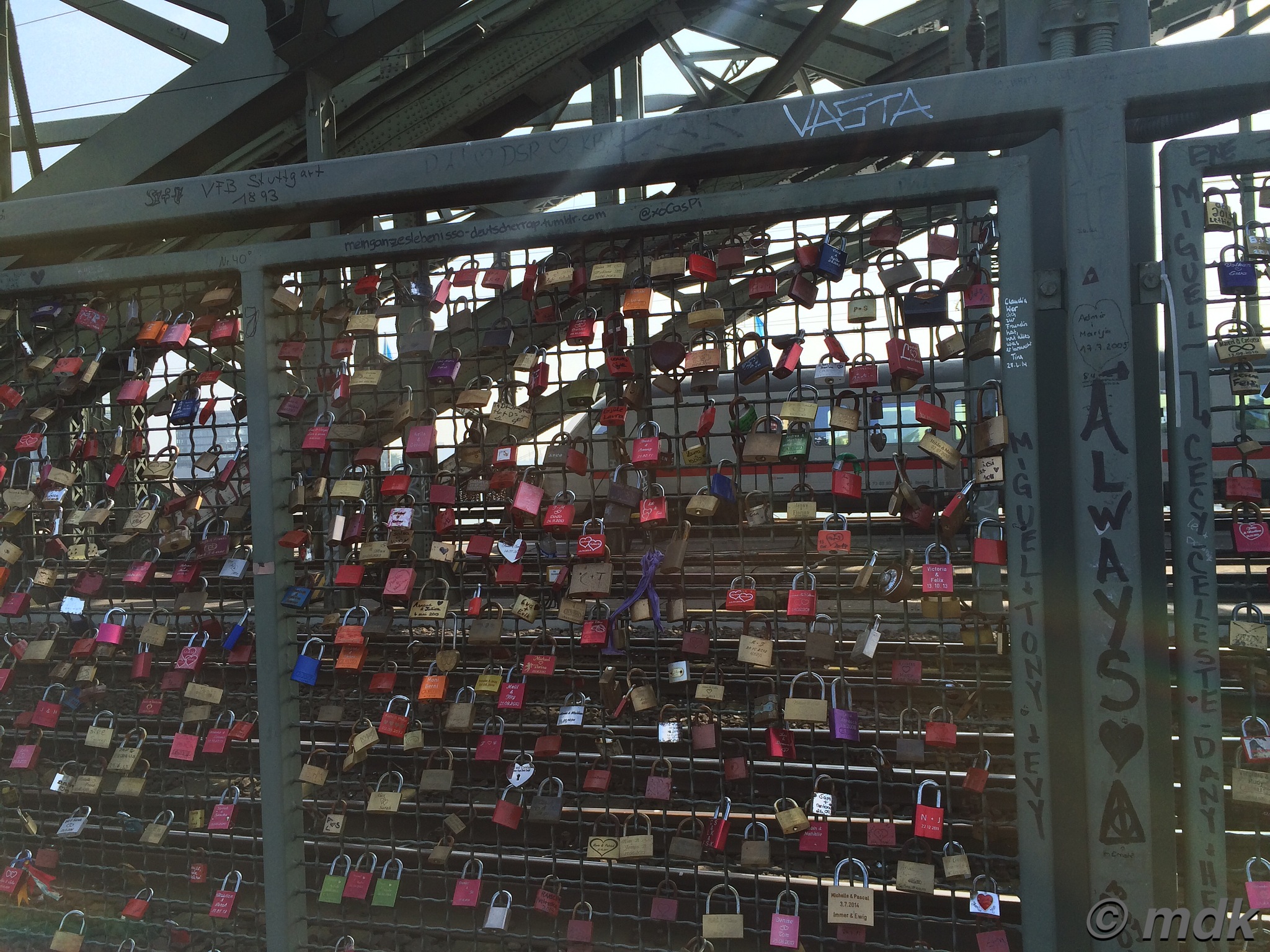 Half way across I stopped to take my customary picture looking down the river and spotted a quirky metal sculpture of a man balancing on one leg on one of the struts sticking out from the bridge. Who says the Germans don’t have a sense of humour? Below, one of the multitude of Rhine cruise boats was crossing the river. When we came to the other side of the bridge a copper statue of a man on a horse sat atop one of the stone pillars. It seems there are four horsemen on this bridge, all originally stood on the old Dombrücke and all represent past kings or emperors of Germany. 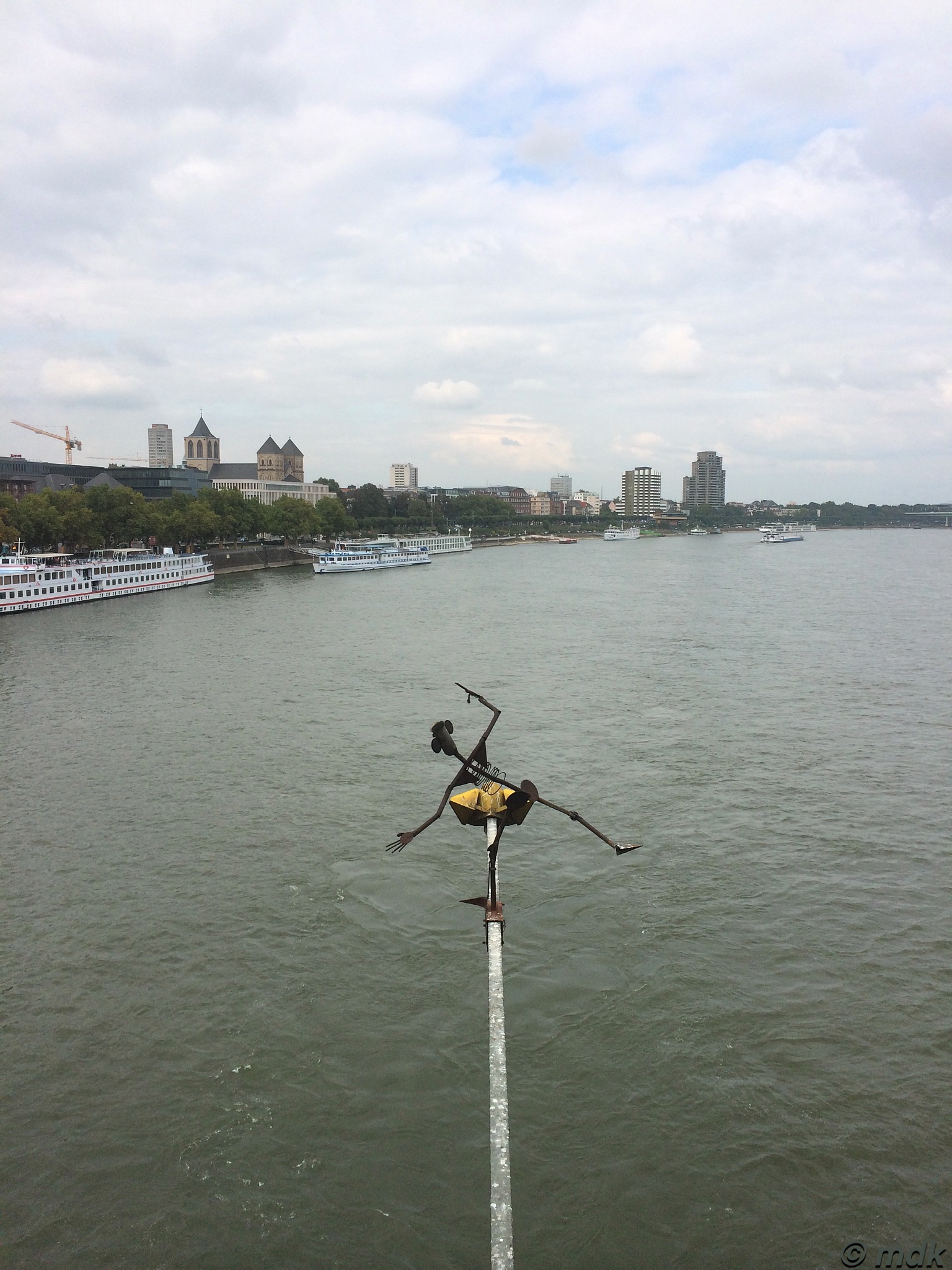 Now all we had to do was find the Lanxess Arena where the running expo was being held, pick up the bag and chip and find somewhere to have lunch. How hard could it be? Actually not all that hard with a little help from the map and the giant dome of the arena in the distance. Eventually we even found our way inside.

Getting the chip proved to be fairly easy, picking up the bag and race pack not so much. There was a massive queue right round the outside of the exhibition area. This was cunningly planned to make sure everyone had to walk slowly past all the exhibits. It took us a good thirty minutes to get to the front of the queue by which time I’d bought Commando a race T-shirt and me a clever device for carrying my phone and keys while I’m walking, not to mention a ton of leaflets about other events (all useless as they’re in German) and several samples of running snacks and drinks. We even got some free water bottles.

After a quick diversion through the middle of the arena to get Commando’s chip checked we grabbed some lunch in the cafe area. With carb loading in mind Commando had a huge bowl of pasta. The pasta seemed a bit much for me so I plumped for a bretzel, a kind of giant pretzel made of bread. 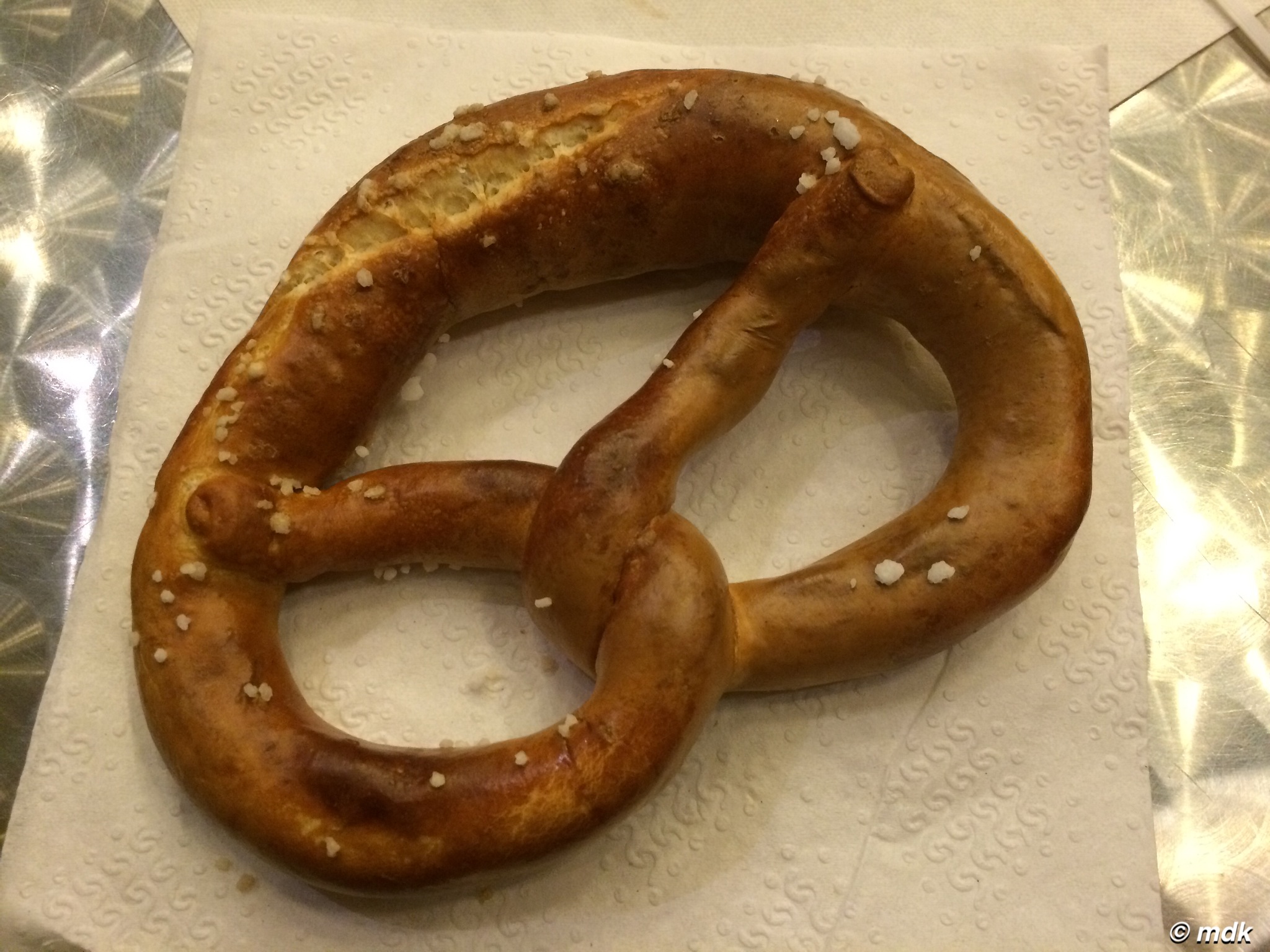 After that it was time to find our way back to the hotel. This turned out to be far less simple than it seemed, mainly because there are several entrances and exits to the arena and we came out on the opposite side to the one we’d entered. This, of course, left us confused and disoriented in a city we didn’t really know at all. We walked round and round the arena and there were several false starts where we walked down the road until we realised we were going the wrong way. Maybe we should have taken more notice of the landmarks on the way there.

Finally we started to recognise things and knew we were on the right track, probably… It wasn’t until we spotted Köln Messe Deutz station though that we really knew we were going the right way. I’d commented on the rather attractive dome of the building as we passed on our way to the Lanxess arena. This important junction serves a similar role to Clapham just outside Waterloo and connects to Köln Hauptbahnhof, the city’s main station, just across the bridge in much the same way. 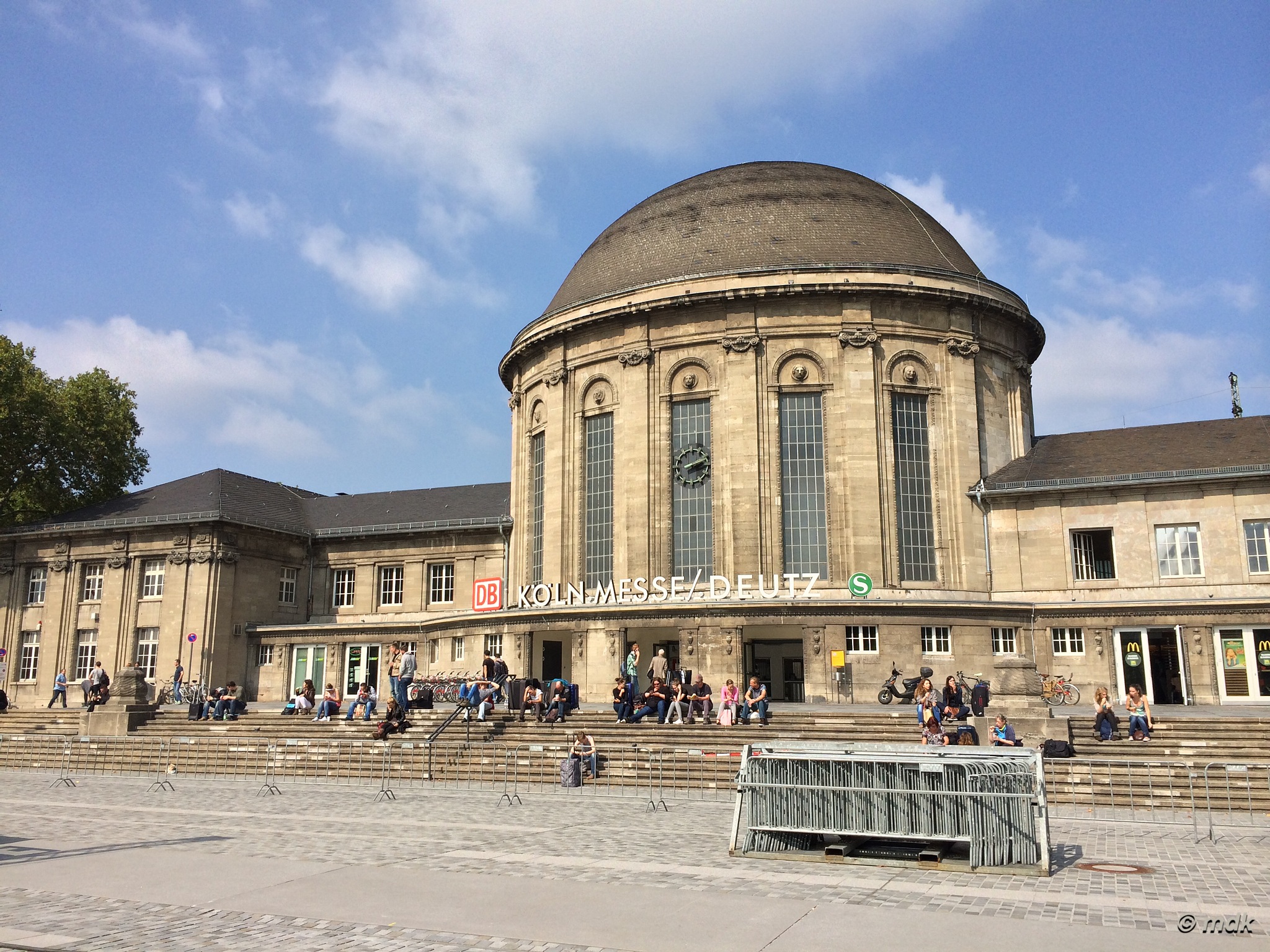 The station is named after the Cologne Trade Fair, Koelnmesse, which is directly north. The attractive building dates from around 1859 and the current incarnation of the station was opened in November 1913 having gradually incorporated four other stations belonging to competing railway companies. During World War II this was the station used to send the Jews living in Cologne to the concentration camps. The last view of their city would have been the beautiful dome as they passed through the doors into the station, probably unaware of what lay ahead. 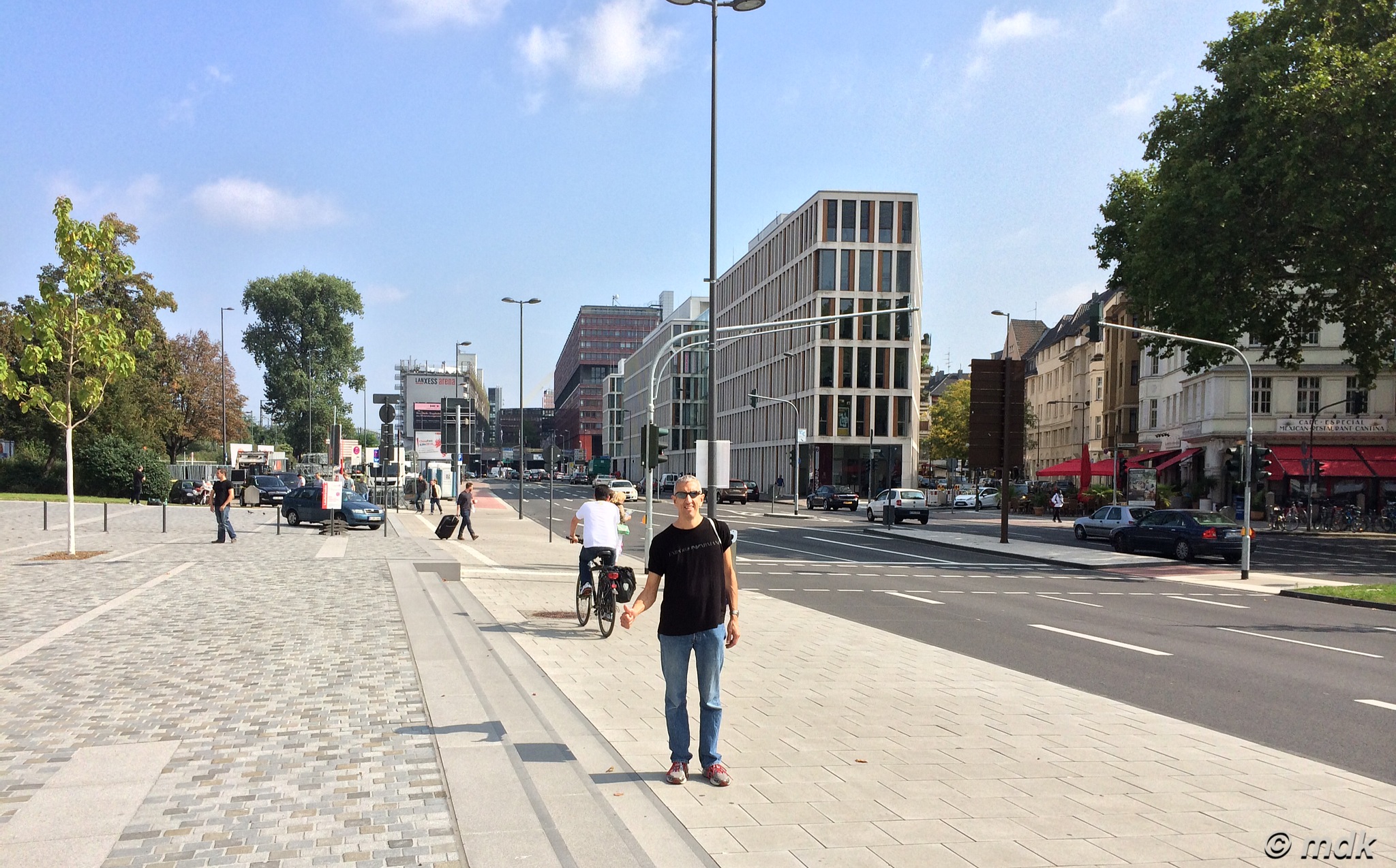 When we saw the rows of locked portable toilets, or toi toi’s, we knew we were home and dry, so to speak. We’d commented on them just after we walked under the bridge in the opposite direction and they were obviously there in preparation for Sunday’s marathon. It was a simple matter then to cross the bridge with trains whizzing past behind all the love locks, walk along the Rhine, through the park and back to our hotel. Mission accomplished…for now. 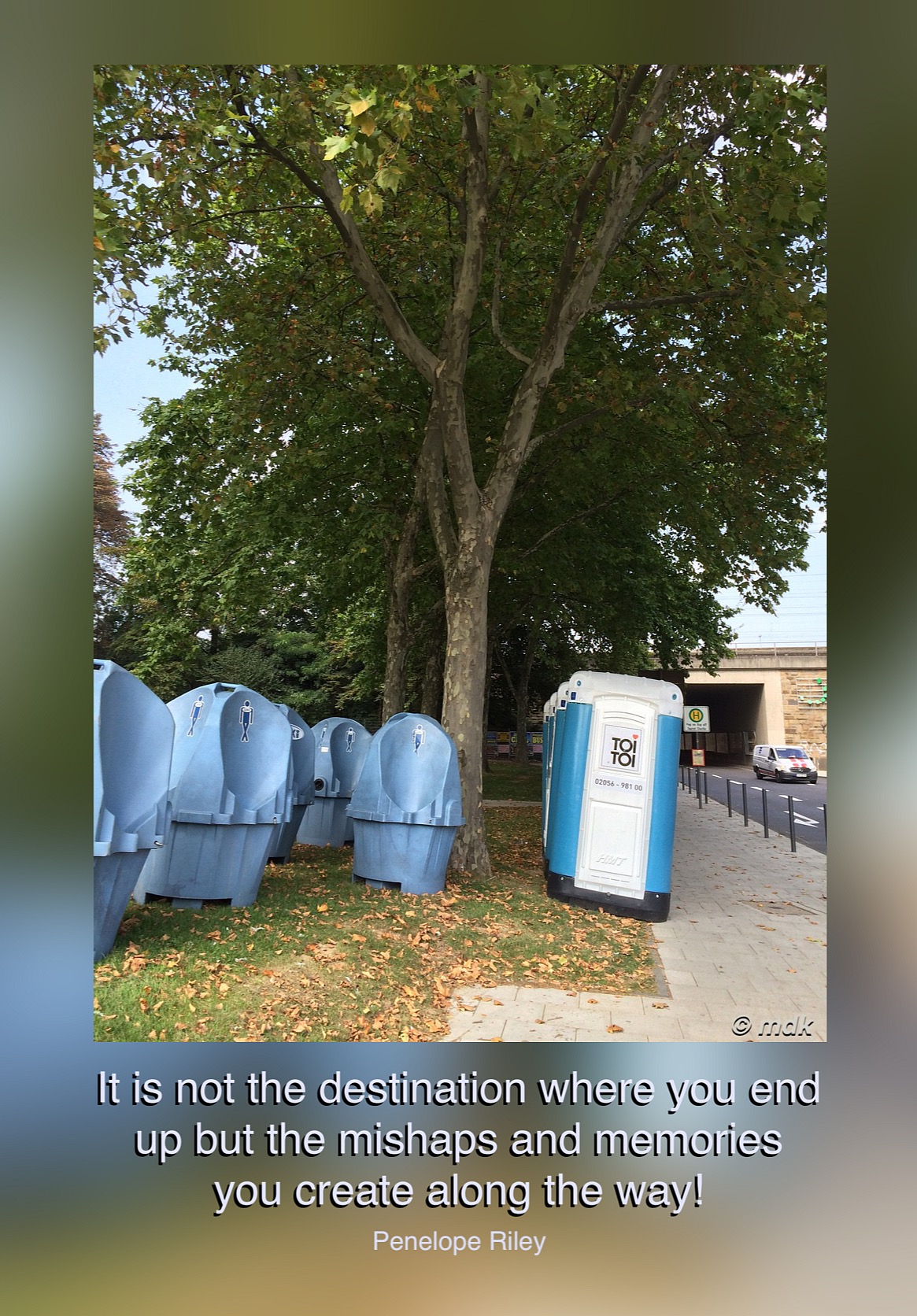