At Kiln Lane we left the towpath briefly to cross both the road and Brambridge Bridge. There was a second half lock here in the 1700’s, probably built to retain water levels for the Brambridge water mill. A little bridge crosses the site But you have to look very closely to see the remains of the lock. Today, with everything so overgrown and the runners hot on our heels there was no time for exploring the history of the canal.

Pretty soon we were passing the spot where the farmer with the gun stood on a rickety wooden bridge watching me so suspiciously some years ago. The bridge was still there but, thankfully, no gun toting farmer. His alpacas were in the fields, most looking newly shorn. I wondered what became of all the soft warm wool? It would be nice to knit a jumper from it. 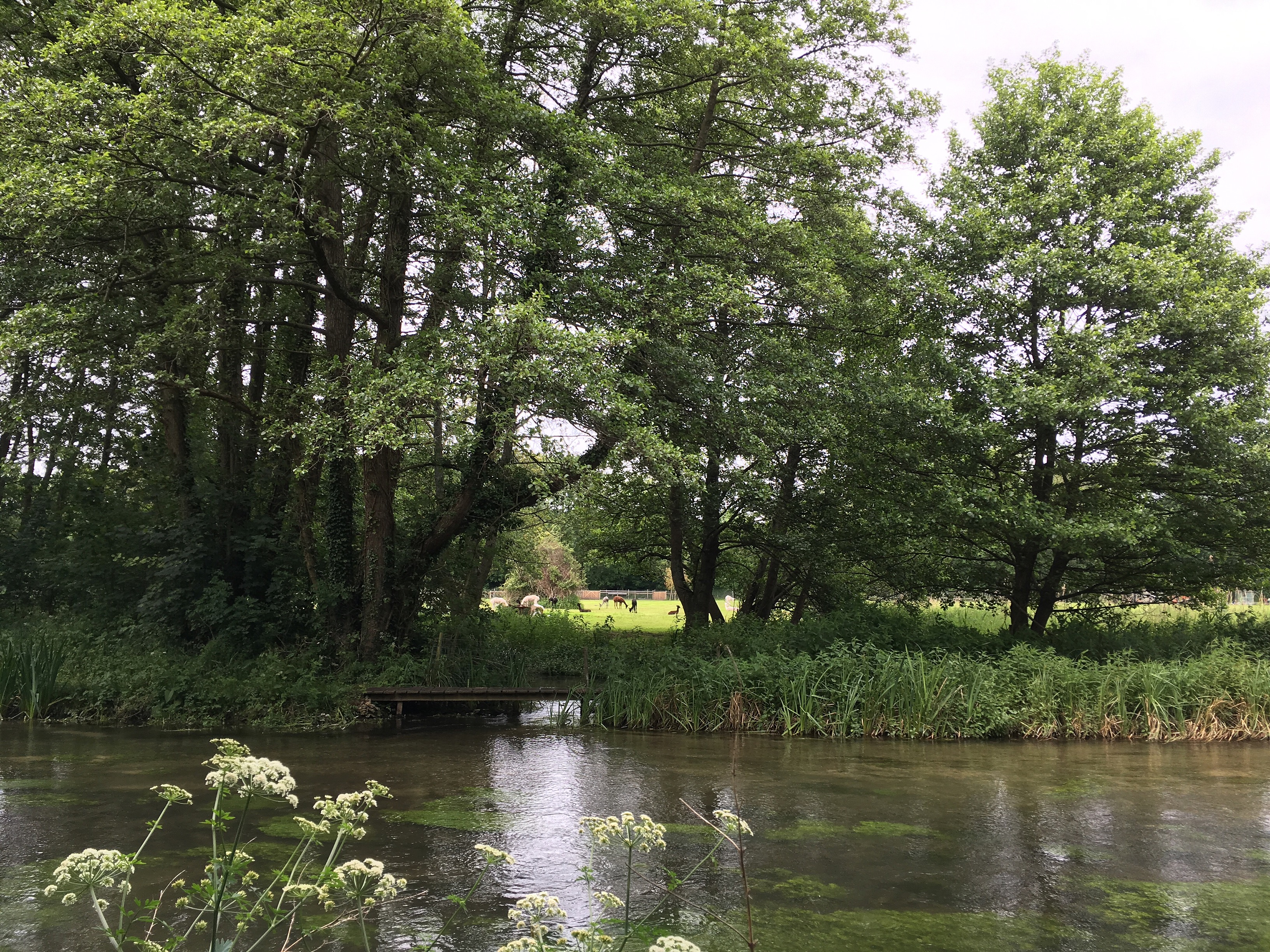 A little way along the towpath one alpaca stood out. Unlike his friends he still had a thick shaggy coat in a beautiful shade of reddish brown. Why he’d escaped the shearing was a mystery. Perhaps the farmer had that beautiful wool earmarked for something special?  Whatever the reason I couldn’t help thinking he must be very hot. For once the Allbrook path was dry and firm. We made good progress past the back of Highbridge Farm with just one quick drink stop under the shade of a tree.     Soon we’d crossed the road at the bottom of Allbrook Hill and looped under the two railway bridges behind the gardens of Twyford Road. The fallen tree that has half blocked the path for so long has been removed since I last came this way. This is probably just as well, as Commando and the taller runners would have had trouble ducking under it. Our next stop came close to Withymead Bridge. There were horses in the fields and CJ couldn’t resist a little horse whispering. By this time we were expecting the first runners to come careering past at any moment so the stop was short. With barely a pause we marched towards Bishopstoke, past the bower of willows to the next triangular marker. Just before Stoke Lock we left the trail briefly. Julie and Matt dashed off to the Tesco Express on Bishopstoke Road for more water. The rest of us took advantage of the picnic benches at The Hub for a rest and a snack. Typically, this was the point the first of the fast boys came dashing past. Luckily they went by so fast they didn’t see us resting instead of walking.

They were also too quick for me and my camera but, when the next fast boys appeared I was ready for them. John, Rob, Luis and Adam stopped for a chat and a photo. They were hot but in high spirits. From Commando’s face I could tell he wished he was running with them rather than walking with me. In normal circumstances this is exactly where he’d have been. At the moment though, life is anything but normal. The fast boys ran on and we followed at a more sedate pace. Across Bishopstoke Road we went through the kissing gate onto the final section of the Navigation. This was the bit I’d been worried about. Everything from Domum Road to Bishopstoke Lock had been more overgrown than I’d ever seen it. The towpath between Bishopstoke and Mansbridge is narrow and crowded by trees and plants at the best of times, with uneven, muddy paths, potholes, tree roots and a host of other obstacles. Negotiating it was going to be tough. At first it wasn’t too bad, although the nettles spilling onto the path slowed us down a little and I couldn’t help wondering how the runners had fared with their bare legs? Once we’d passed Conegar Lock and crossed the rickety wooden bridge the river was a little close for comfort. The banks are crumbling in places and festooned with roots and dips. They slowed us but we got through. So far no other runners had passed us but it was only a matter of time and this was not a good place for it. Once we’d passed under the makeshift looking railway bridge we were more or less on home territory. The airport was now behind the trees to our right, although we couldn’t see it. The towpath here dips up and down, each level change an indication of where the old locks once were. It was hard going, with nettles, brambles and branches across the path and lots of shouted warnings about roots and logs. We’d long since left the river behind and the old canal bed beside us was dry as a bone for the most part. Behind the trees to our left were the meadows of the Itchen Valley Country Park but the trees were so overgrown we could barely see them. It felt as if we were walking through a long, slightly spiky, green tunnel. A steep dip marked the site of Decoypond Lock. There was a little rain water in the lock chamber and the remains of the brickwork could easily be seen. Even so, it is hard to imagine what it must once have been like before nature took over. Not long after we’d passed the lock there was a shout of “runners coming through,” and we all did our best to flatten ourselves against the trees at the side of the canal. I was so busy cheering them on I forgot to take a photo until they’d run past. Moments later the trees thinned out momentarily and we caught a glimpse of the cows grazing on the Itchen Valley Country Park meadows. Then  the next runners appeared and it was time to squeeze to the side of the path and cheer again. This time there were rather a lot of them. Finally the last of the group went past and we could get moving again. Although we knew there were still more to come. By now we were close to the boring section of the Navigation. When the motorway was built the canal was blocked off at Mansbridge Lock and a long up and down diversion created for the trail. It is narrow and noisy, with the motorway just behind the trees. It seems a pity the motorway builders couldn’t have built a bridge and left the canal alone. It would have made for a slightly shorter and more pleasant walk and the possibility of reopening the old waterway at some point.

There is a bridge at the turning point of the diversion but it’s the River Itchen that flows beneath it not the canal. From the motorway bridge to Mansbridge the trail is hemmed in on both sides by fencing and overgrown trees. It isn’t the most pleasant of walks but ahead is Riverside Park and, around three miles on, home. Of course home was not where we were going so my ‘nearly there’ feeling was a little misplaced. After such a long, lonely walk, it seemed odd to be in a park filled with people. Close to Cobden Bridge two more runners came past, Lindy and Lindsay. We finished the Itchen Navigation together but parted company at the top of the slope. CJ, who doesn’t really drink and had no interest in going to the pub, left us there too and headed for home. A huge part of me would have liked to go with him.

The last few miles were tedious. After the greenery and isolation of the towpath I’m sure I wasn’t the only one who found the streets filled with cars and roads to cross a slog. When we reached the crossing on Portsmouth Road though, the cheers from the runners outside the pub opposite put the smiles back on our faces. Well, that and the thought of an ice cold drink and a seat. We had conquered Winchester to Woolston. As challenges go this was the perfect mixture of fun and hard work. For some it was the furthest they had ever walked or run and the terrain tested the mettle of even the distance runners. All day I’d been snapping photos, trying to capture the event. Now I could relax and savour the moment while the amazing Jane Grant took over camera duties. 7 thoughts on “Winchester to Woolston the tough miles”