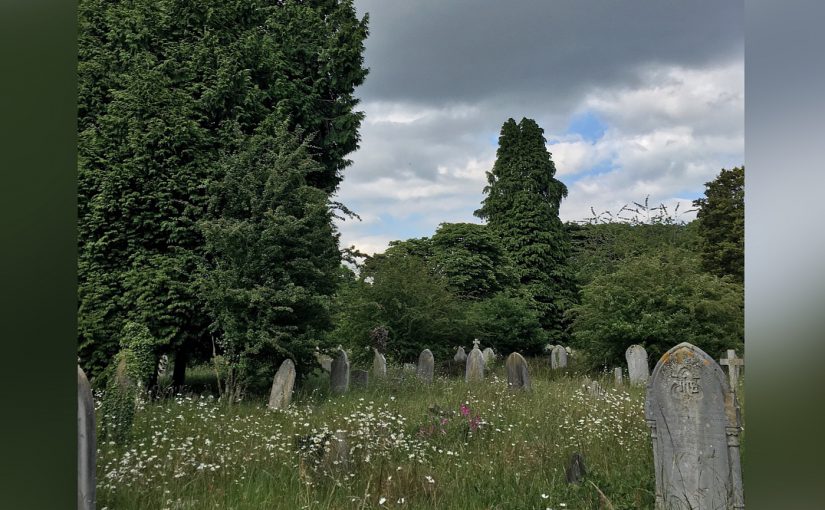 For Commando, one of the hardest things about being ill, apart from the uncertainty about what is wrong with him, has been not being able to run. The consultant Rheumatologist he saw last week didn’t give him a definitive diagnosis but he did give him a steroid injection and told him he could begin to run again as long as his legs were pain free. In fact, he said exercise was a good thing. On Saturday he ambled around parkrun. It was far slower than he’d have liked but it was a run. This evening he decided to go to the Common and have another run on his own. CJ and I went along for a walk as there have been precious few of those lately.

We parted company on Cemetery Road. Commando went off towards the main part of the Common and the parkrun route, CJ and I headed up the road towards the Old Cemetery gate. We’d meet back by the car in an hour. The day had been another of those sultry, humid affairs where everything feels like a huge effort. Now the sun was getting lower along with the temperature. This felt like a blessing. The Old Cemetery is huge, it covers twenty seven acres and has almost one hundred and seventeen thousand graves, Every time I visit I tell myself I need to be systematic but it always ends in random wandering. Usually I enter the cemetery through the gate near Cemetery Lake, mostly because it’s the nearest to the parkrun start and finish. Today I thought I’d head for the main gate, a little further along Cemetery Road, so we carried on past the path to the lake. Before we’d gone very far CJ spotted a small gate in the metal fence. It was too intriguing to ignore so we went through. The gravel path was narrow and overgrown but it soon opened out. The first Grave that caught our eye looked new, which is unusual here. There are only a handful of new burials each year in existing family plots. The stonework on this grave stood out because it was white and unweathered and there were fresh flowers in the urns. A closer look told us it dated from the 1950’s although the stone and the flowers suggested this might be a replacement for the original. Puzzling over this we walked on. To the untrained eye much of the cemetery looks neglected and overgrown. The grass is long with seedheads wafting in the breeze and there are nettles and brambles everywhere. In truth, by the 1980’s  much of the cemetery was allowed to grow wild. Some graves became so overgrown they all but diasappeared and others were damaged by ivy creeping into cracks and crevices. In 2003  the Friends of Southampton Old Cemetery was formed. Their aim was to prevent further damage and uncover the graves while preserving the vibrant wildlife habitat. Today Southampton City Council and the Friends of Southampton Old Cemetery try to maintain the delicate balance between nature and history. To encourage this diversity grass cutting and clearing is carried out on a rotational basis at different times of year in different areas. The cemetery is home to twenty six species of butterfly and a rich variety of plants and every season brings something new to see as you walk the shady, tree lined paths. Right now there are flowers beginning to appear on the brambles and the long, flowering grass is sprinkled with bright daisies. Here and there splashes of colour come from vetches, birdsfoot trefoil and the ubiquitous dandelions along with huge mounds of rhododendron. I like the slightly chaotic wildness. It has the feel of a meadow rather than a grave yard, a better place to slumber the centuries away than in regimented rows in manicured, sterile turf to my mind. Of course the graves were the main purpose of our little exploration, along with their stories. We paused in our walk now and then to read a name or a date where either was still visible. Some names stood out, like Sarah Saxon Foot, buried along with her husband Robert, who we guess was a sailor from the words ‘crossed the bar’ inscribed on their grave. They died at the beginning and end of World War I and their son, Robert John, followed in 1921. Sometimes the dates tell a story. This was the case with the Orchard family. William died in 1917 aged just thirty nine and was buried with his wife, Jesse, and eldest daughter, Eveline. William and Jesse were in their thirties when Eveline was born. Late in life to have a child in those days. Perhaps they married later than most did then and Eveline was a long awaited first child, or maybe she had older brothers? Either way there must have been more children for Eveline to be named as  eldest. Their happiness didn’t last long. William died when his daughter was still young and Eveline died tragically young too, at just seventeen. So poor Jessie not only lost her husband but also her eldest daughter. The next interesting grave we came to belonged to Isaac Rains Barnsley, a reverend of the Primitive Methodist Church. The church began in England in the early nineteenth century, under the influence of American evangelist Lorenzo Dow. The leaders, Hugh Bourne and William Clowes, were dismissed from the Wesleyan Church because they refused to stop holding open air meetings. They founded The Society of the Primitive Methodists based on the teachings of Wesley and the original Methodists and continued to hold open air meetings. Their members were mostly working class and they used women as ministers and preachers, a very unusual thing at the time. They also played an important part in the formation of the Trade Union movement.

Isaac was born in Derbyshire in 1840. His father, William, was a farmer and local preacher. Aged just ten Isaac began to preach himself and entered the ministry at fourteen. He travelled the country preaching and, in 1868, married Priscilla Watts, daughter of Rev William Watts, in Nottinghamshire. They had three children, Annie Maria, who became a teacher, Walter, who became a minister like his father, and Elizabeth, who married a solicitor. He died in Southampton in 1913. From the photograph I discovered  he looks like a serious but kindly man. 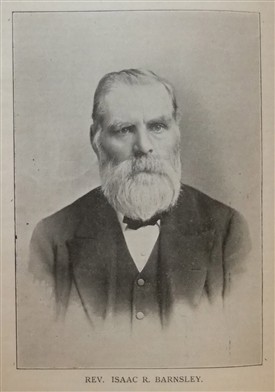 Death has no regard for fame, wealth or piety. Saints and sinners, rich and poor all meet the same end and, here in the Old Cemetery, the graves are scattered as randomly as death wields his scythe. As we strolled along the path we discovered elaborate tombs with porticoes and pillars beside simple wooden crosses, all connected by the grasses and wildflowers and scented by the delicate perfume of the dog roses. Some graves date back to the beginnings of the cemetery in 1846, their words long erased by lichen and weather. Some have fallen, others lean at odd angles. Here and there are war graves, their clean crisp stones and military insignia mark them out. One such belonged to Frederick Baker of the Army Service Corps Remount Depot, Shirehampton. There was little on the grave to show who he was or how he died but his service number revealed a little more.

He was the son of Charles and Mary Baker born in Freemantle, Southampton in 1882. He worked as a bricklayer for Mr Smith, a builder until he enlisted to fight in the war to end wars. He died in 1916, aged thirty six in Southampton General Hospital, no doubt from wounds inflicted in battle. He left a widow, Mary, a daughter, Nelly and the sum of two pounds seven shillings and eight pence. What a struggle their lives must have been. There are one hundred and twenty five Commonwealth War Graves in the Old Cemetery, all but fifteen from World War I. Nearby we discovered a clutch of Belgian servicemen along with a large memorial stone topped with a crucifix on a column. The crucifix had a kind of roof above it, turning it into a triangle. This is something I’ve never seen before and I wondered what it meant? There are foreign graves in the Military Cemetery at Netley too so,  not for the first time, I thought about how these twenty one Belgian soldiers had ended up buried so far from home. War is a messy business and the First World War was particularly gruesome. The Flanders fields ran red with blood, so many young men were cut down in their prime. When the stretcher bearers braved the battle to collect the injured I doubt they paid much attention to the uniforms of the men they rescued. The wounded, like Pappy, were taken first to field hospitals where they were treated in tents and then, if they survived, ‘down the line’ by horse and cart,  ambulance or hospital train. Where they ended up depended largely on the severity of their wounds and luck. Some found themselves in abandoned chateaux in France or other abandoned buildings which served as makeshift hospitals. Others went further still. Some, like Pappy and these young Belgian men, crossed the channel to hospitals in England. Netley Military Hospital was one of the largest.  Sadly not all of them survived. Below some of the graves we found small markers, written in French, ‘a notre grand pere…” It was good to think the families of these men, buried so far from home, had found them and perhaps visited from time to time. Their sacrifice may not have ended all wars but they should not be forgotten. By this time we were close to the gate I’d originally meant to enter. Before we went through there was one more interesting grave to see. Sheltering under trees in a storm is never a good idea although most of us still head for the trees when the rain begins to fall. The grave of Douglas R G Lane is a cautionary tale showing what can happen if you do. The summer of 1955 was hot and sultry, much like today. The hottest day of the year came on 14 July. Two young men, Douglas Lane and Anthony Willis, both eighteen and in their last year at Richard Taunton’s College, had been to Taunton’s swimming gala at the Lido in the centre of Southampton. They left early, cycling to Southampton Girls Grammar School to meet their fifteen year old friend Betty Bolton. The two lads were members of the Young People’s Fellowship at Winchester Road Congregational Church and were both Sunday School Teachers. Douglas was about to join the RAF and become a pilot, Anthony was soon off to Kings College Cambridge to study chemical engineering and Betty, the Sunday School pianist,  planned to go to university and become a teacher. None of these things were meant to be. As they cycled towards the Common  it began to rain. By the time they got to Hill Lane the storm was so severe they stopped to look for shelter. They entered the Common and, with thunder crashing and lightning flashing, they stood under a large oak tree trying to keep dry. The tree was struck by lightning. People rushed to try to revive the unconscious youngesters and they were rushed to hospital but all three died. Douglas is buried close to the spot he sheltered and his two friends are resting in Hollybrook Cemetery. What a fickle thing fate is.

6 thoughts on “Summer tales from the Old Cemetery”