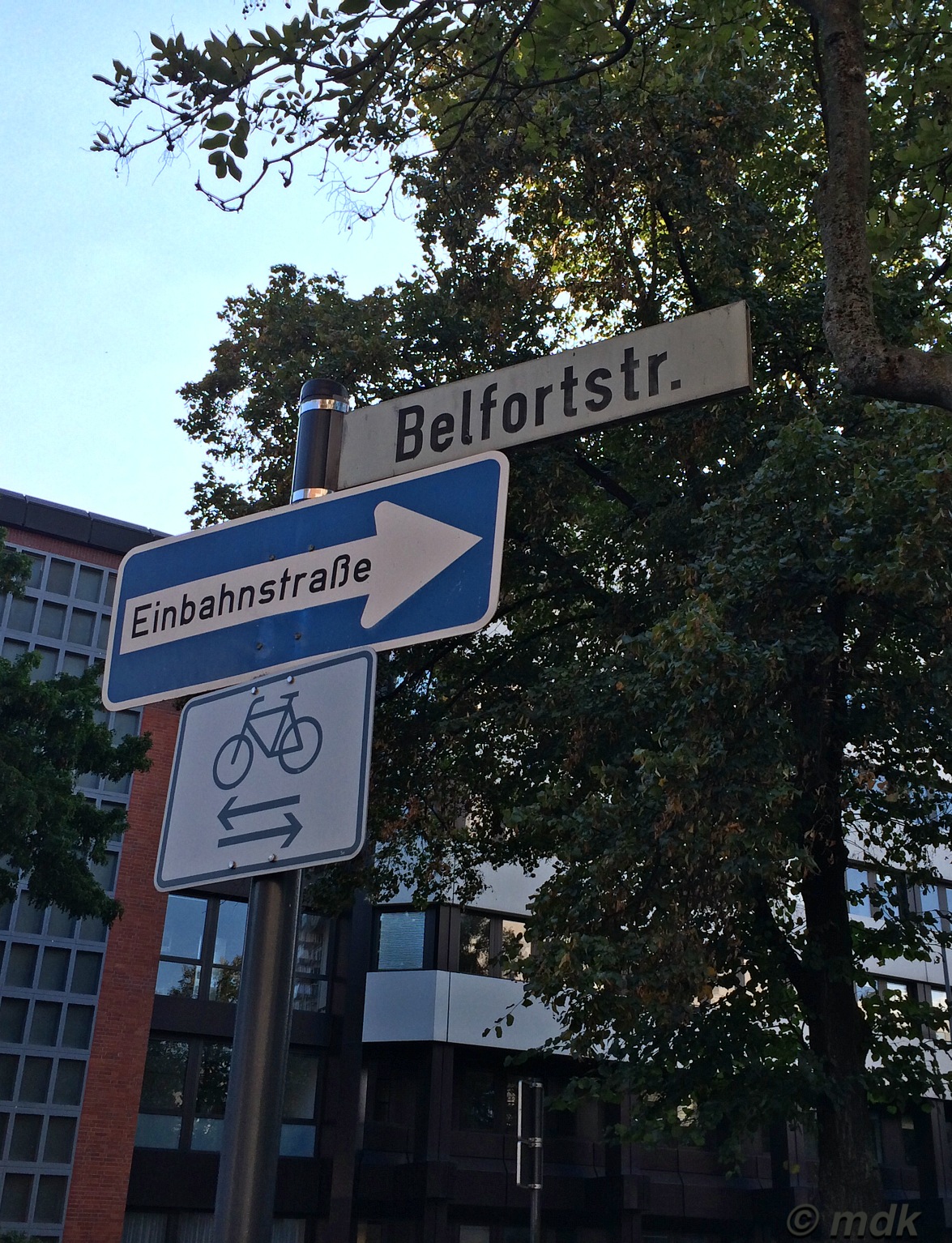 We’d made it to Cologne for the September 2014 marathon. We’d collected the race pack and, after a bit of chilling in our hotel, Commando went out for his last training run. This would take about half an hour and, while he was out, I decided to do a bit of exploring on my own. This was part reconnaissance and part mission to find somewhere that sold chocolate milk for his post marathon recovery drink. Surely somewhere in Cologne had to sell chocolate milk?

The starting point for my chocolate milk finding mission was the little park near our hotel, which is actually called Theodor-Heuss-Ring, named after Theodor Heuss a liberal politician and first president of the Federal Republic of Germany after World War II. My main objective, other than said chocolate milk, was not getting lost. With this in mind I took a picture of the road sign next to our hotel then circled the park we’d walked through earlier in the day. There were some nice little play areas and, as this was late afternoon, quite a few children were enjoying them. 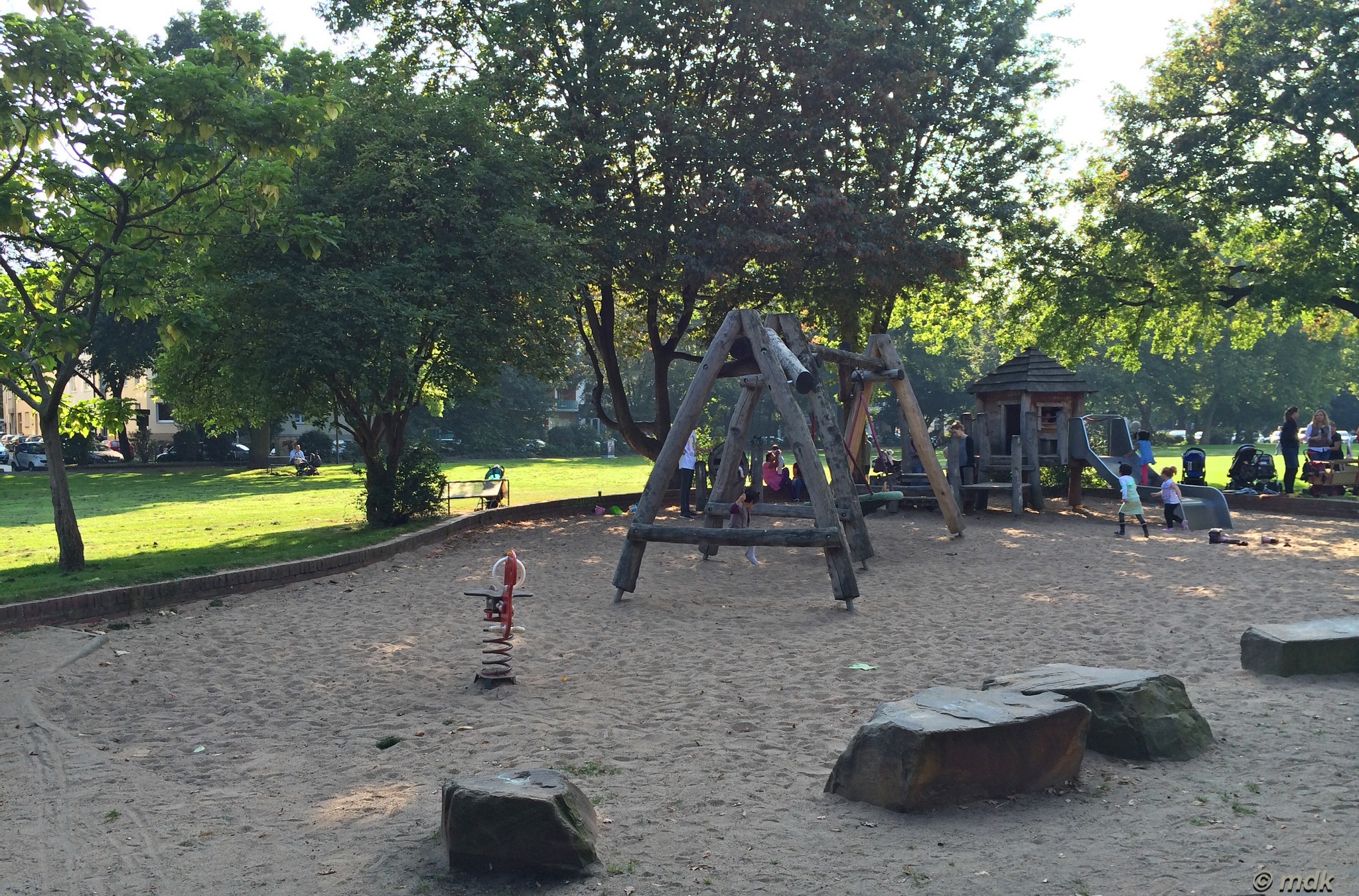 At the end of my loop I saw there was more park on the opposite side of the road so I headed towards it. This part of the park had a small artificial lake with ducks on it. Very pretty but not exactly helpful on the chocolate milk front. Passing the people lounging about on the grass with bottles of Kölsch after a busy day at work, I peered towards the road hopeful of seeing shops. There were some interesting looking buildings but they mostly looked like apartments. If I was going to find shops I was probably going to have to leave the park. 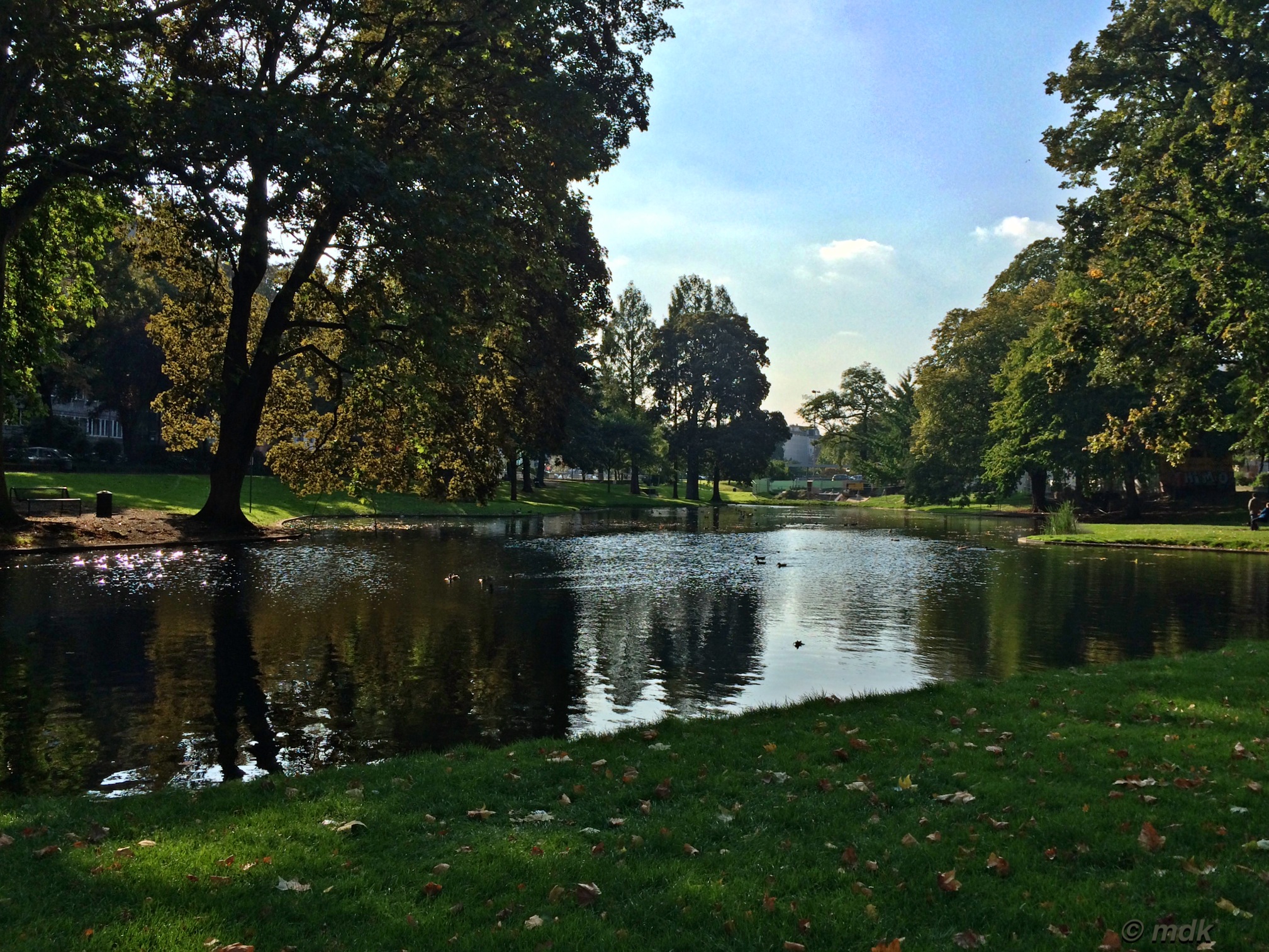 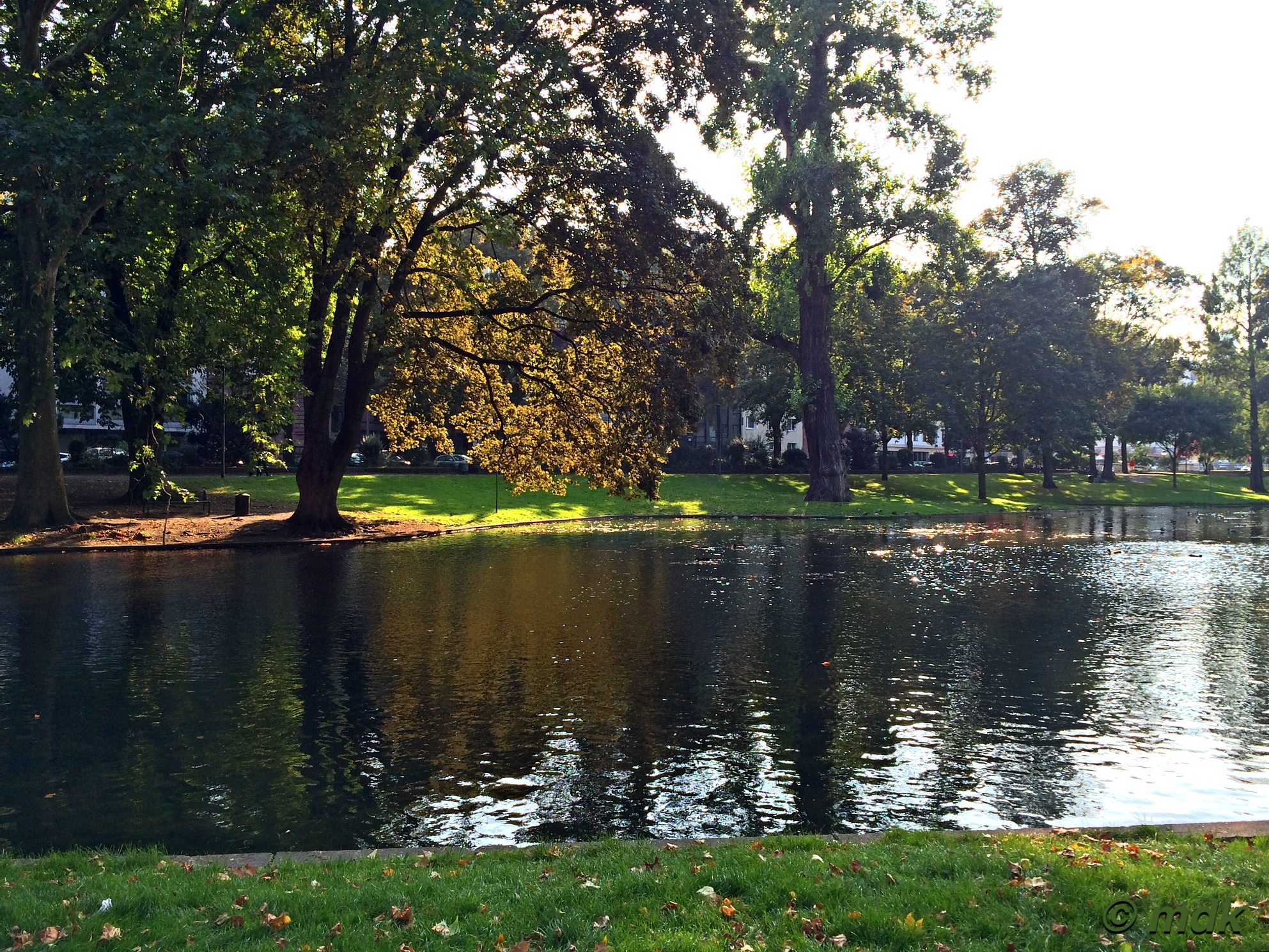 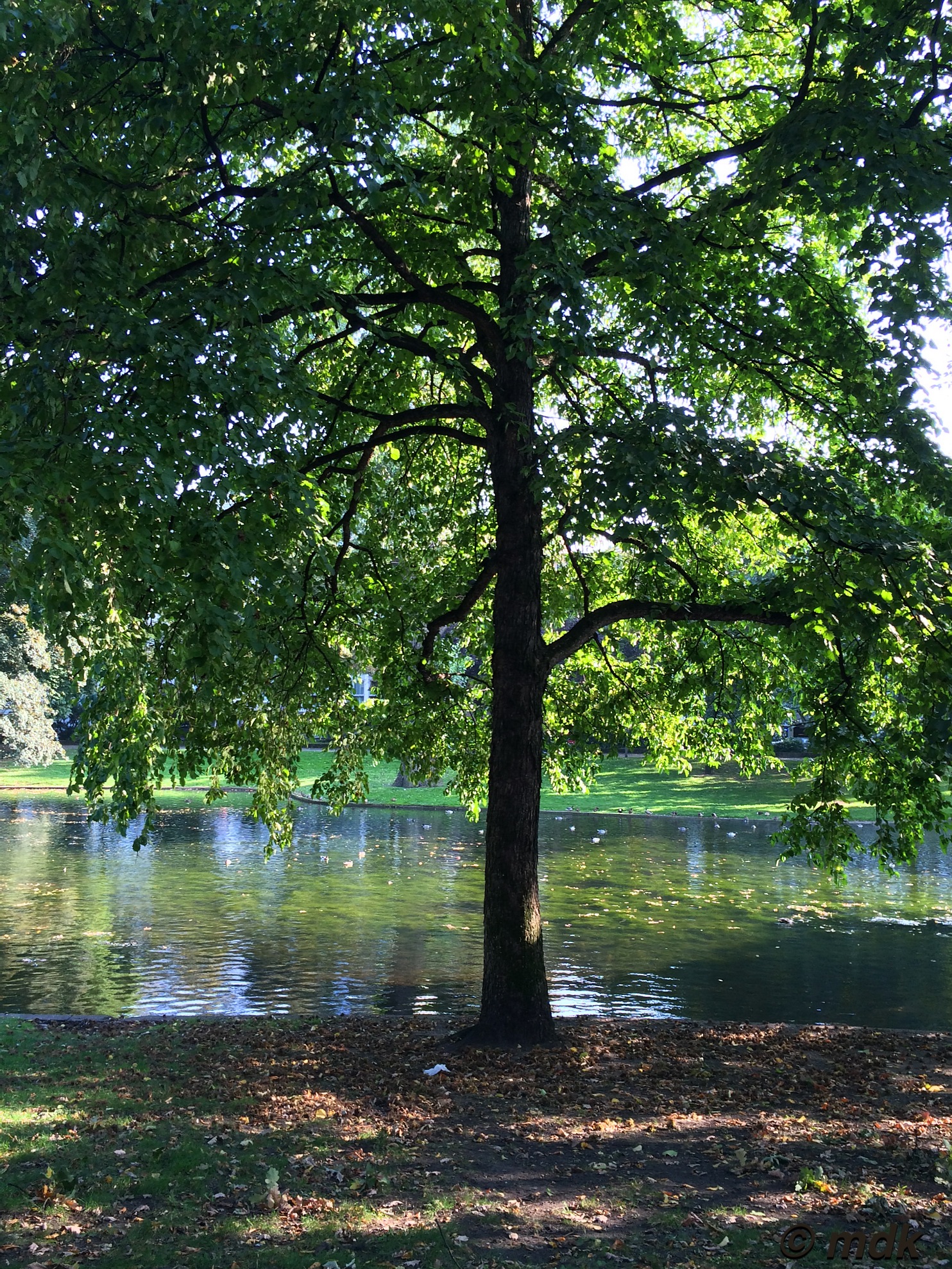 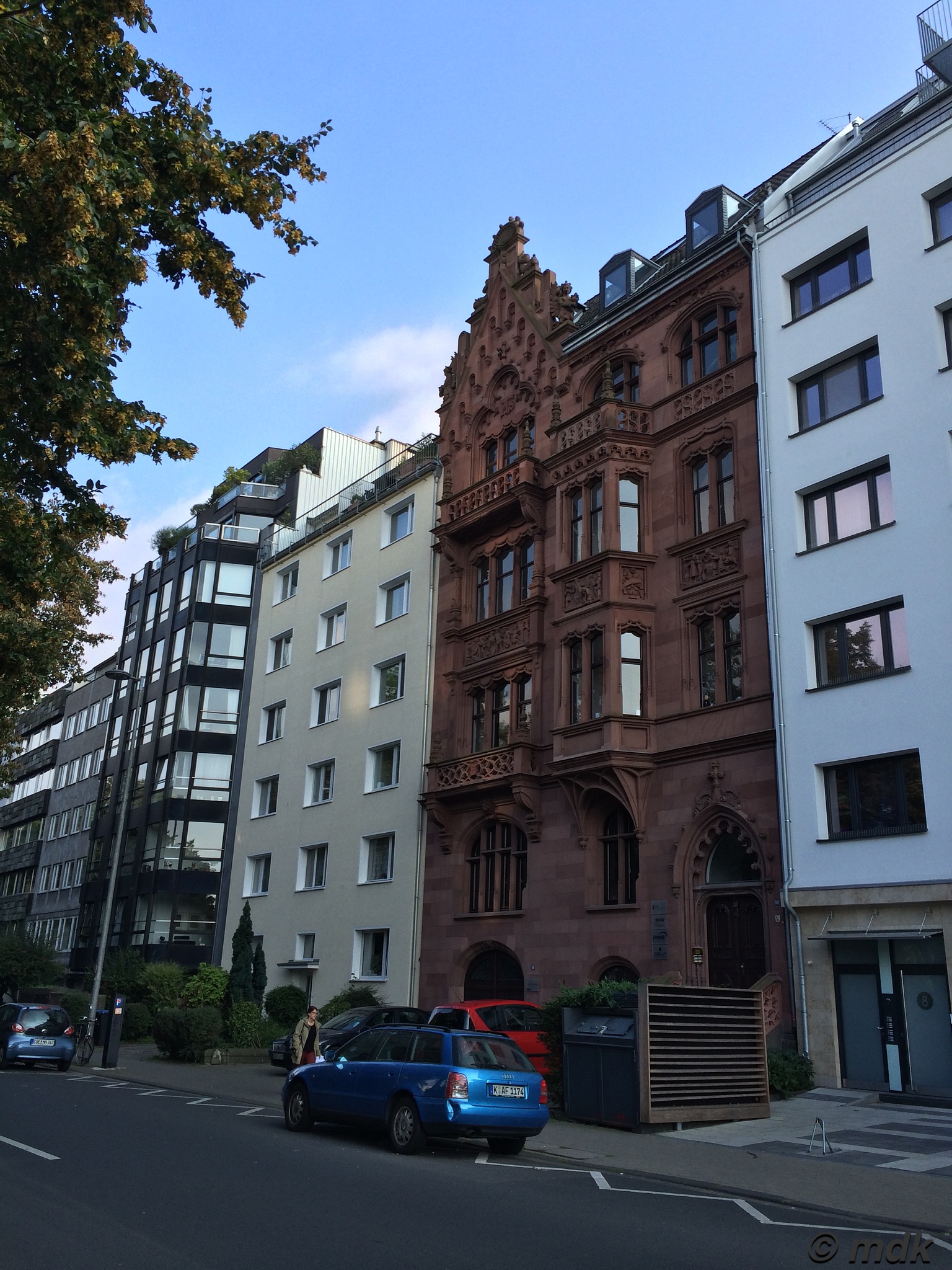 At the next road there was an underpass and what seemed, at first glance, to be even more park ahead. Actually this was Ebertplatz, a major underground station opened in 1974. Obviously this could be useful to know. Between what appear to be two entrances there is a small plaza. At this time of the evening it seemed to be filled with tramps. There was also a very curious sculpture. Quite what it was meant to be was beyond me although the graffiti artists seemed to like it. It is possible it was, in part, to disguise the metal tubes we’ve seen about that are probably vents to the underground. 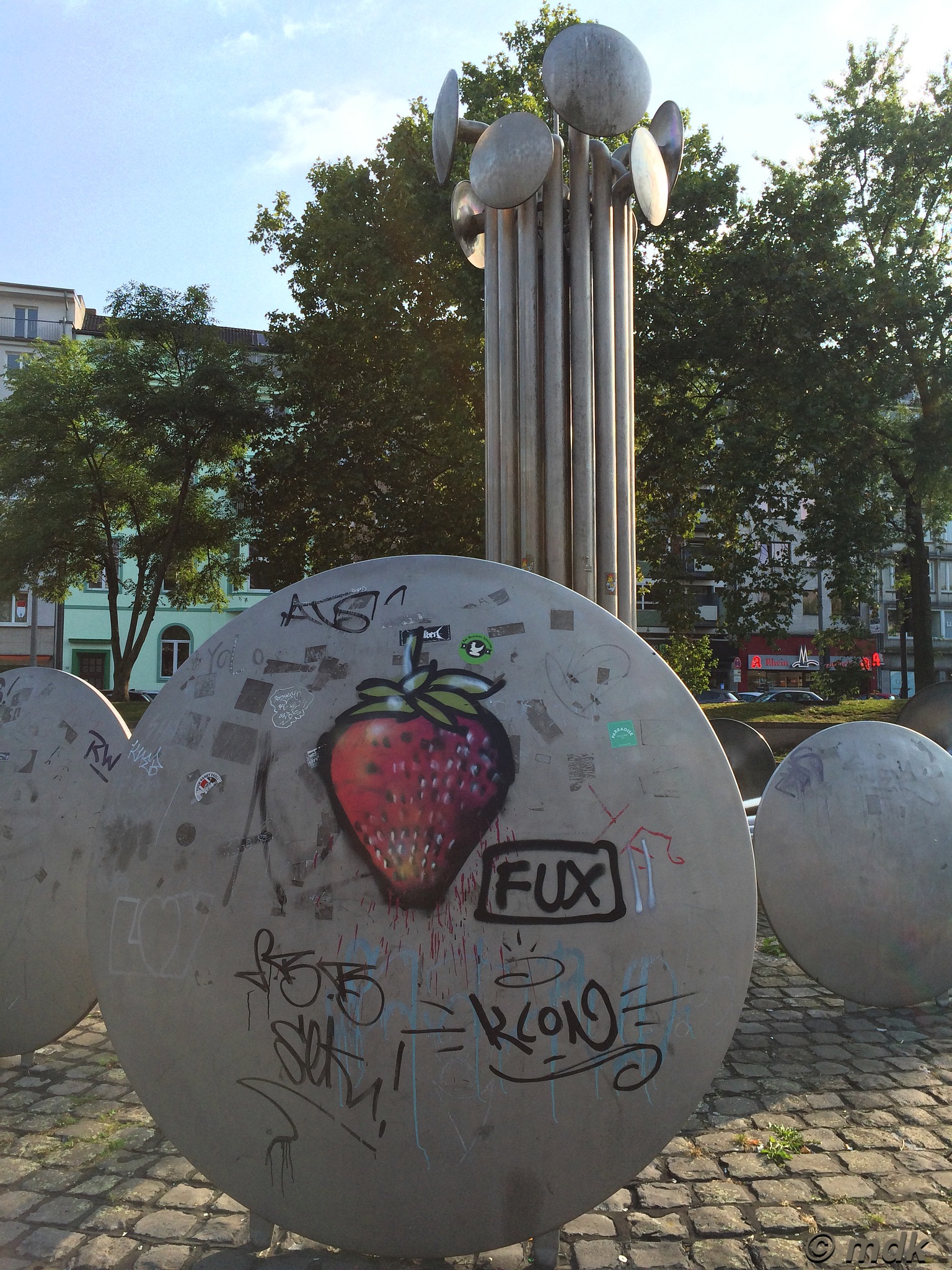 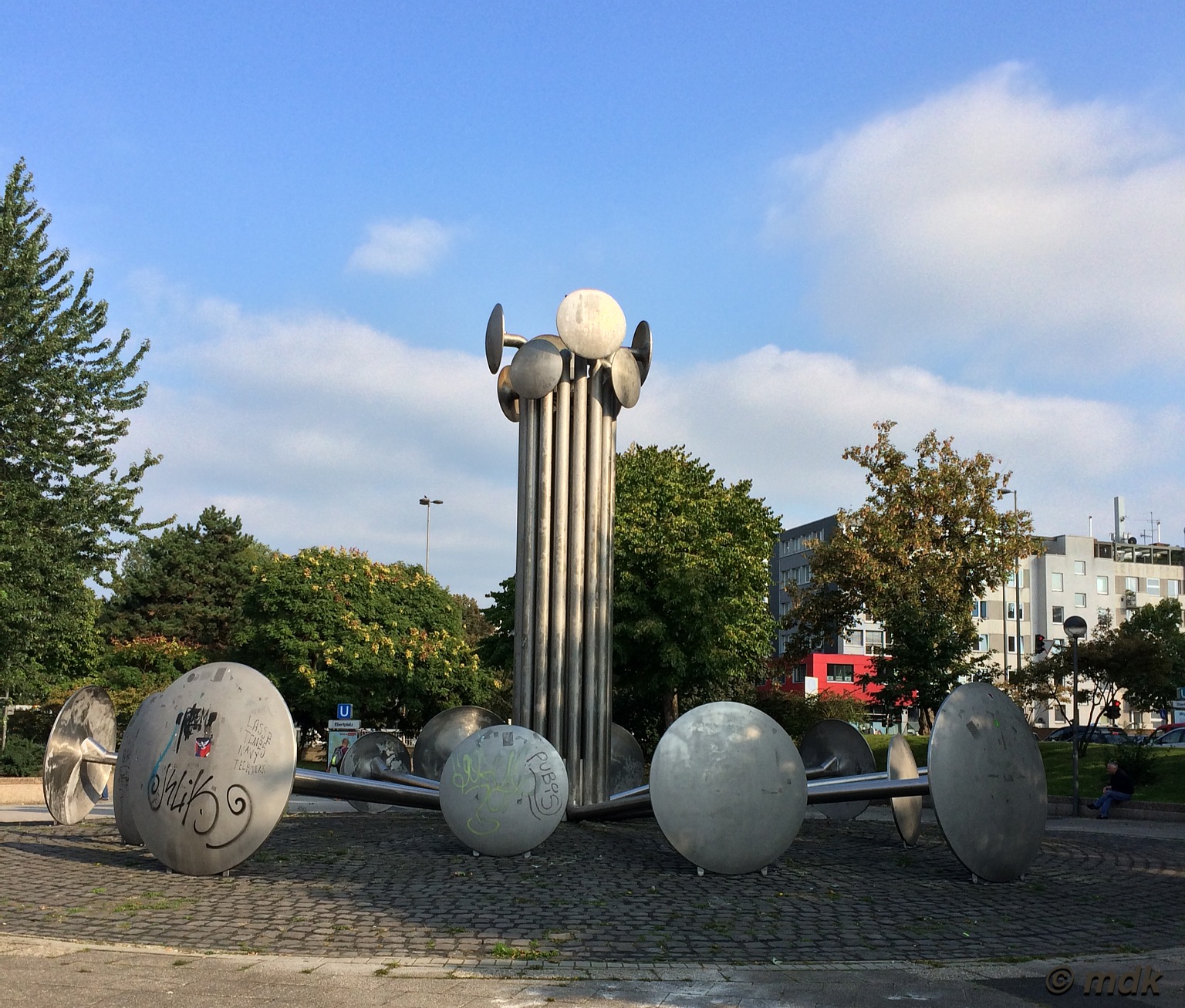 On the other side of the park there was another underpass, or maybe another part of the underground. Just as I was about to go and explore I looked to my left and saw something way more interesting. It looked like a gate, similar to Southampton’s Bargate. How could I resist? 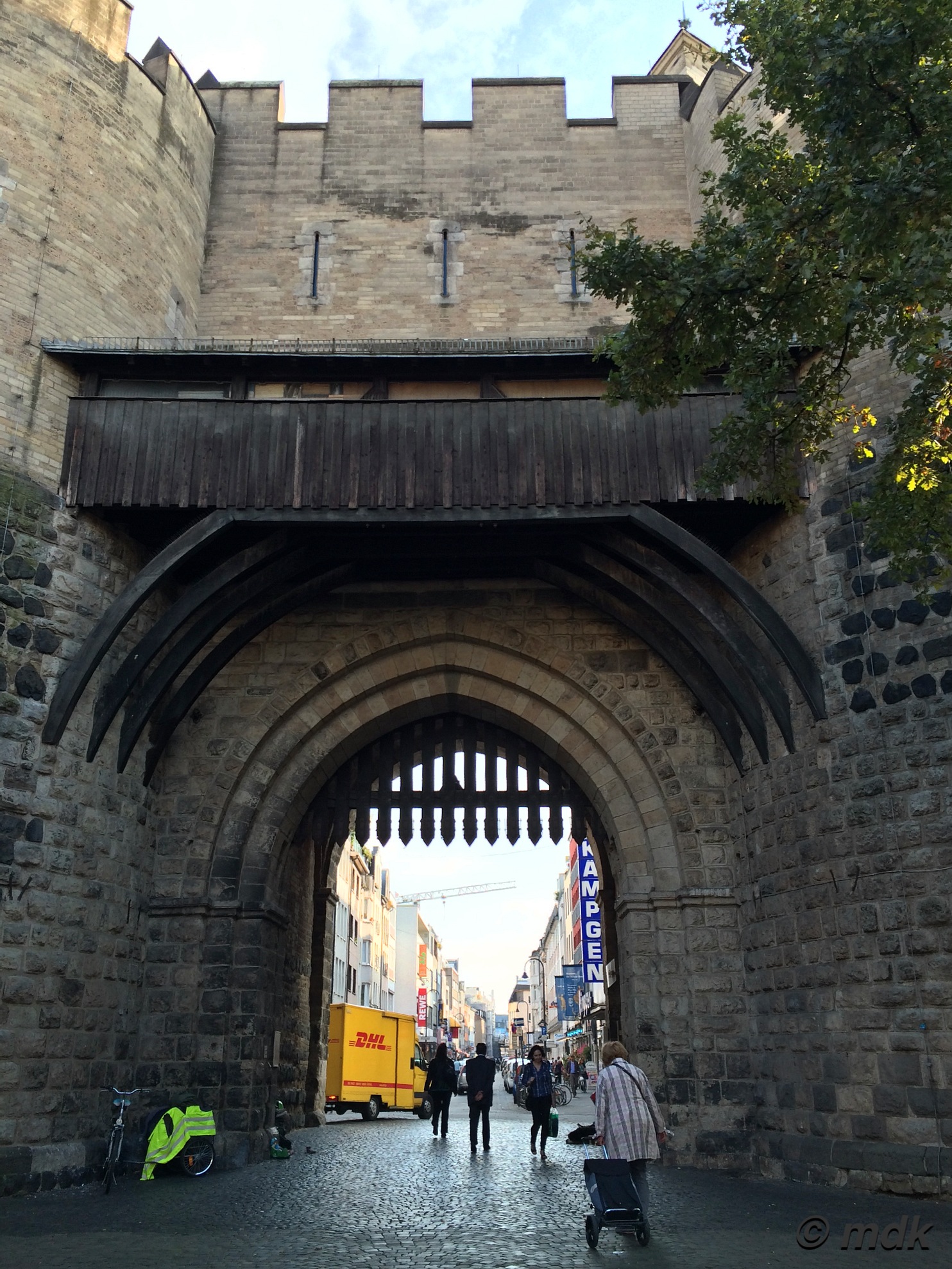 This, it turns out, is Eigelsteintorburg, one of four remaining gates of the medieval Cologne city walls. It really is Cologne’s version of the Bargate, or one of several anyway. This is the north gate and the name means eagle gate. It is thought there were originally twelve gates to the medieval city. This one was built during the third extension to the city, in around 1228. I was standing outside the old medieval city looking in and I could see shops. Time to walk under the portcullis and enter…

From the other side the gate was even more intriguing. It was obvious from the start that some rebuilding had gone on and when I looked into the history later it turns out most of the city walls were demolished in 1890 when city architect Joseph Stubben saw them as an obstacle to his new north south roads. Later he restored this gate replacing the windows above. It seems such a shame that so much history was destroyed just to build roads. 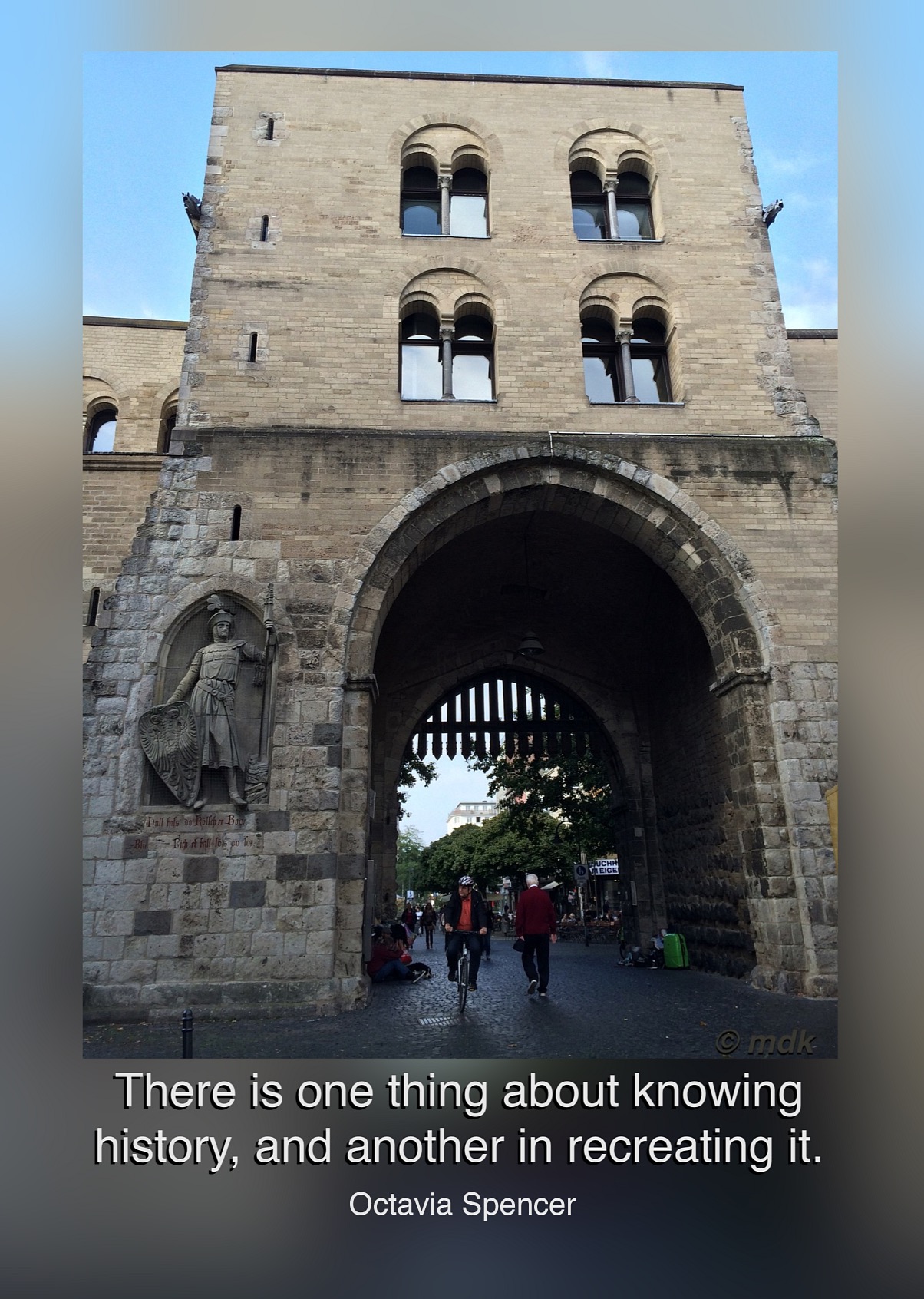 There is a relief sculpture called Kölsch Boor, which, apparently, represents the farmers of Cologne. Hanging from his left arm is a city key and he holds a flail. The shield in his right hand has the double headed eagle of Cologne on the front. The inscription beneath means, ‘hold on you Cologne farmer, the empire it falls and you get sweet or sour.’ The sculpture is actually a replica of the original which was badly weathered. 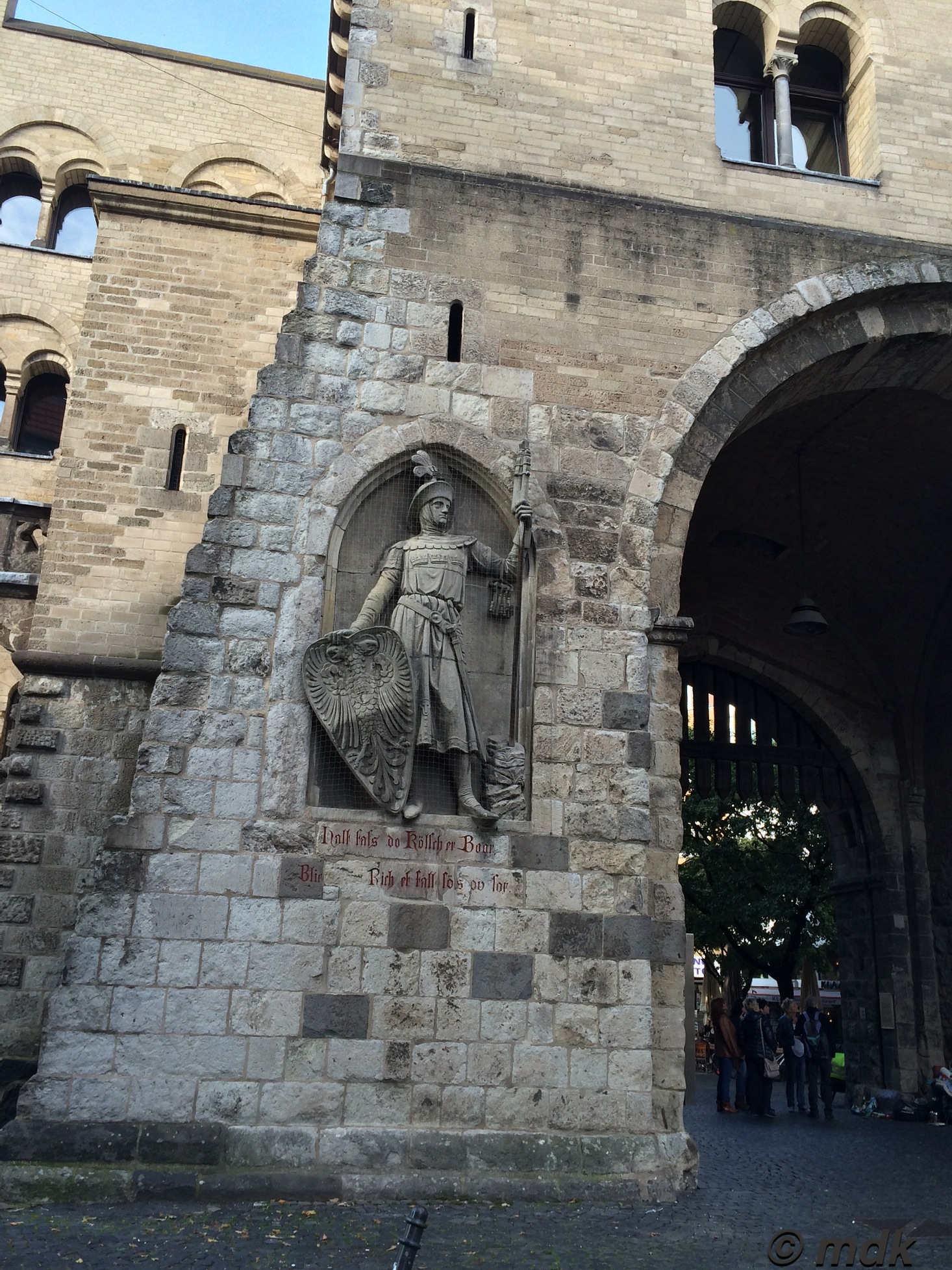 Like Bargate, this gate has undergone many incarnations, as a military prison, science museum and historic museum amongst other things. The niche on the right hand side of the gate is the most bizarre of all. High up half a boat is sticking out of it and an anchor rests on the ground below. This is a lifeboat from the wreck of the cruiser Cologne, sunk in World War I. Quite why it is there or what it means is beyond me. 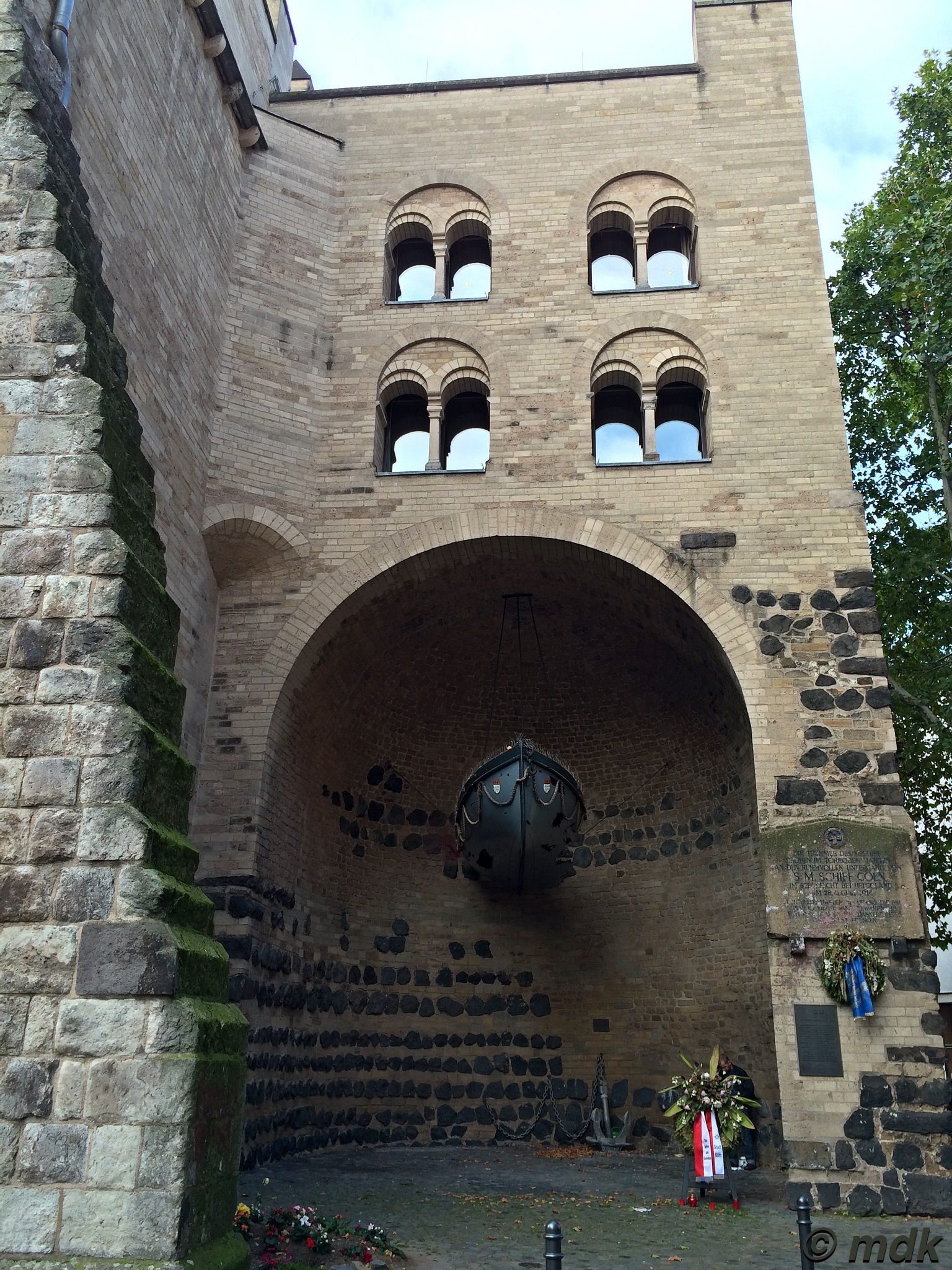 The Eigelsteintorburg survived the Second World War with just minor damage to the wooden gallery on the outside, or field side, of the gate. These days the rooms above can be rented for private functions. It also seems to be quite popular with beggars and tramps who flank either side as you walk through.

Once I’d stopped gawping at the gate and scratching my head about the boat I looked towards the shops. Thankfully there was a supermarket. Whether this is representative of all German supermarkets or not I’m not sure but it seemed to be stacked to the gills with lots of really healthy food. The choice of fruit and vegetables alone made me want to fill a basket. After a lot of wandering I found chocolate milk and tore myself away without buying any of the other temptingly healthy food. Mission accomplished. And I even made it back to the hotel without getting lost.

We rounded the day off with a stroll down to the waterfront in search of food. Commando said he’d seen lots of eating emporia while he was out running. Passing under the bridge there was a park with a curious water feature made up of dips in the cobbled paving and block like Islands of copper. The locals seemed to be using it as a foot bath and I may well follow suit after my Sunday walk. Beyond this we found such a choice of places to eat it took a while to decide. 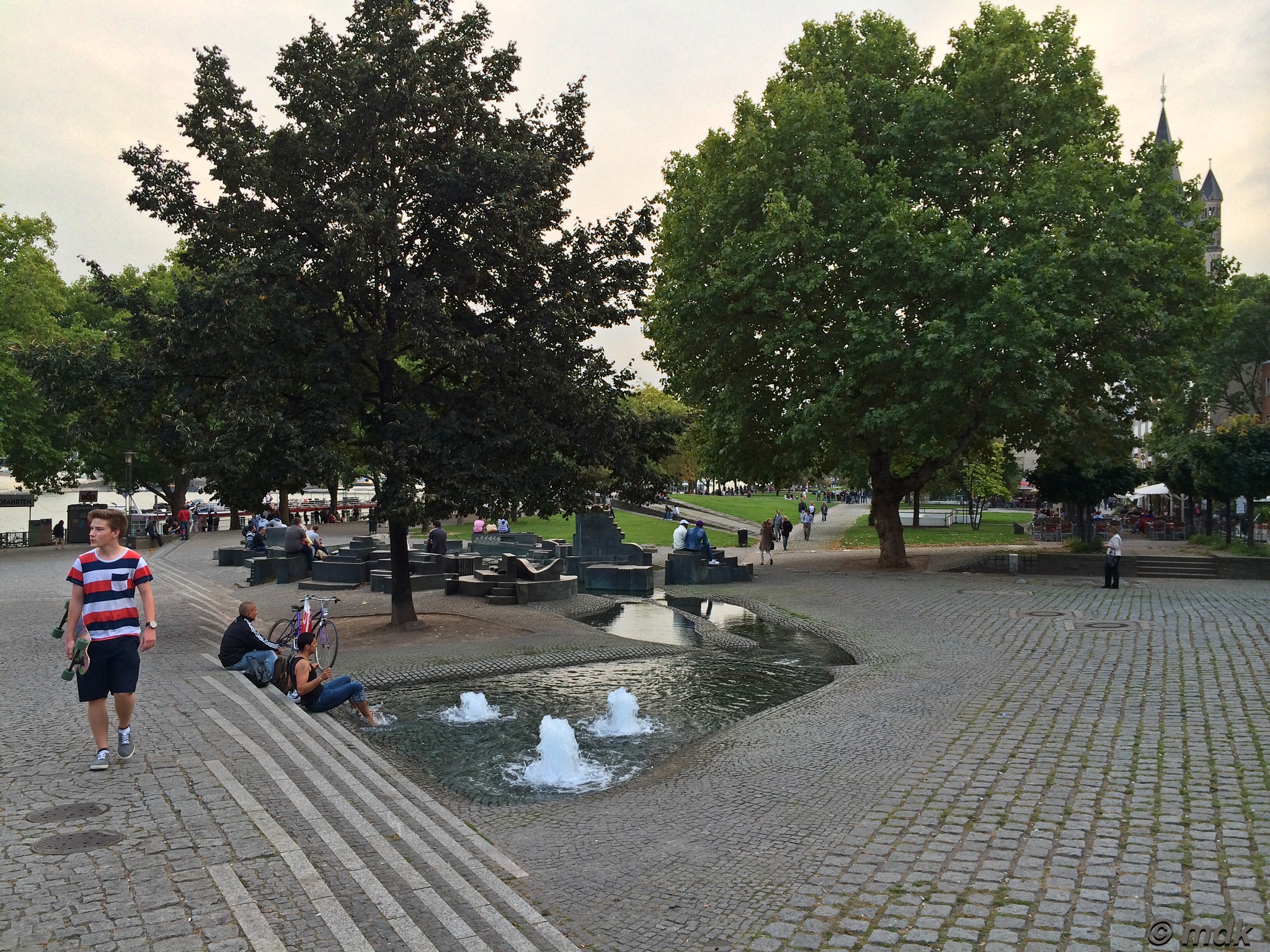 Commando settled on steak, I had pizza, which he finished off and, best of all, I had my first Kölsch in thirty four years. I’m not really a beer person. Let’s face it, I’m not even an alcohol person, but Kölsch is special. It’s the locally brewed lager, smooth tasting, cool and quite different to any other beer I’ve ever had. After a day that ended up with me walking around ten miles it was just what I needed. 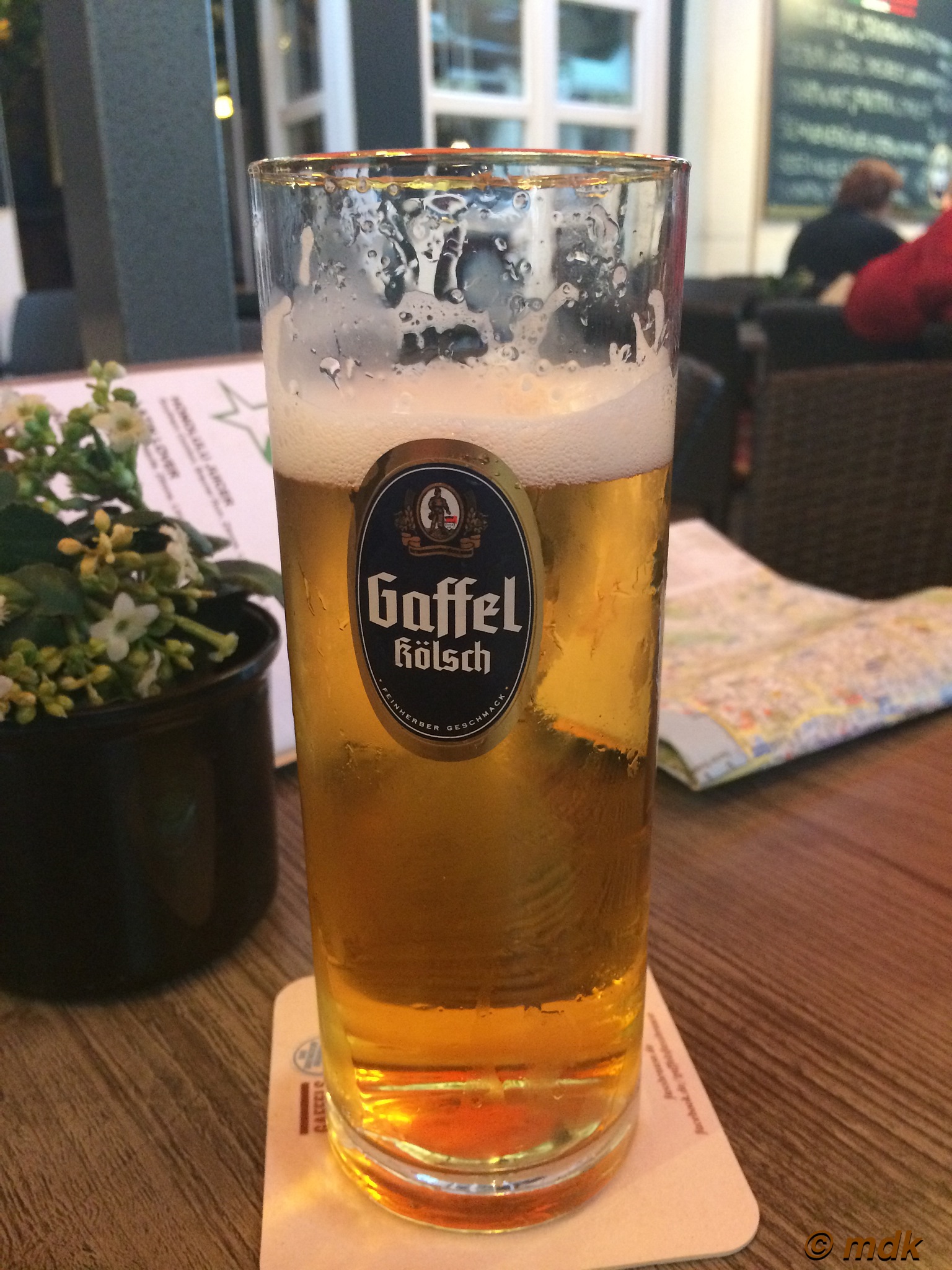 While we ate, a saxophone playing busker serenaded us and the sun slowly went down. The walk back rounded off a brilliant first day. The cathedral towered above us. The Hohenzollernbrücke was all lit up and, every time a train passed a shower of confetti like seagulls flew into the air. The blue arc of the opera house dominated everything, lighting our way along the river. 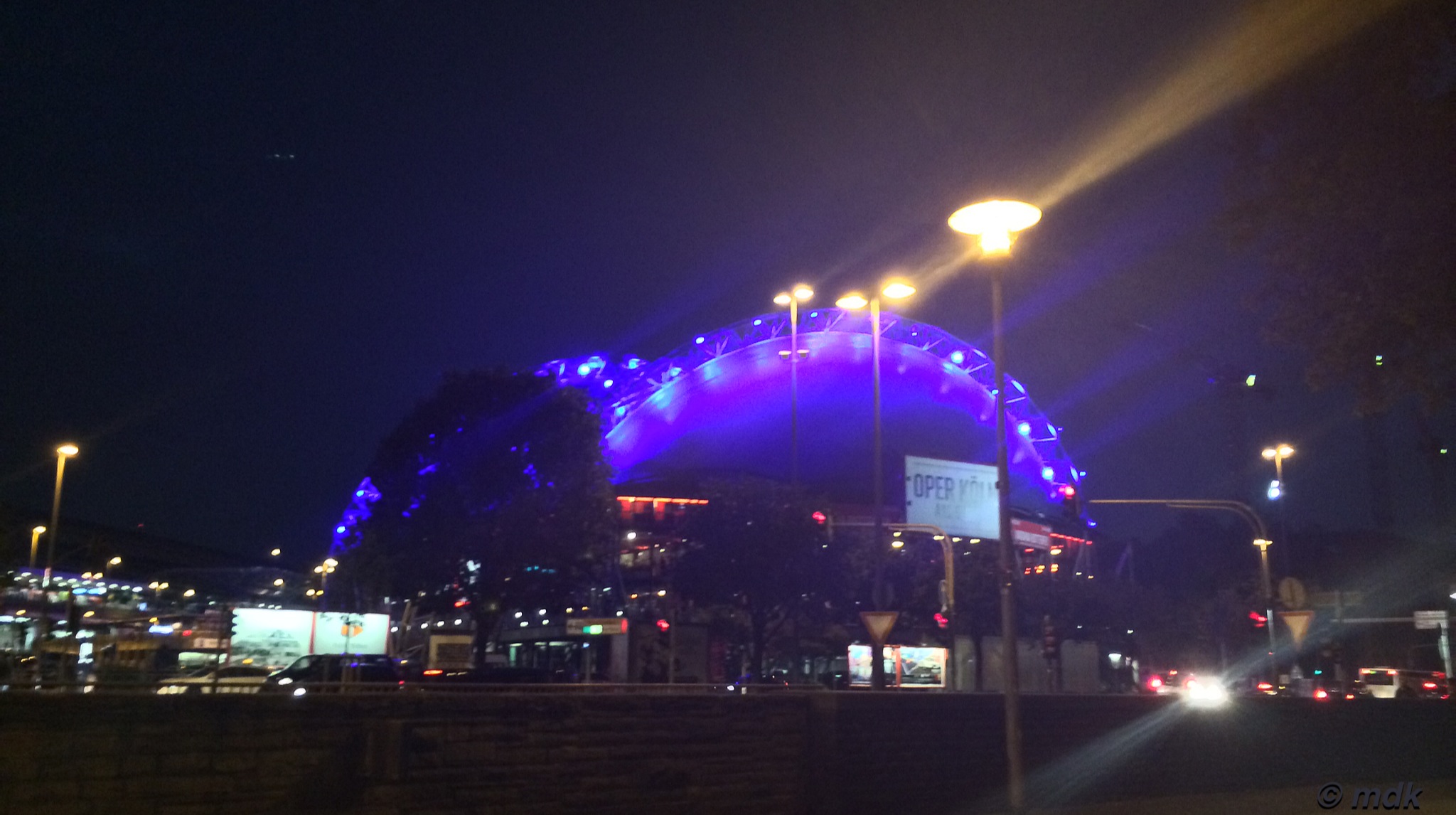 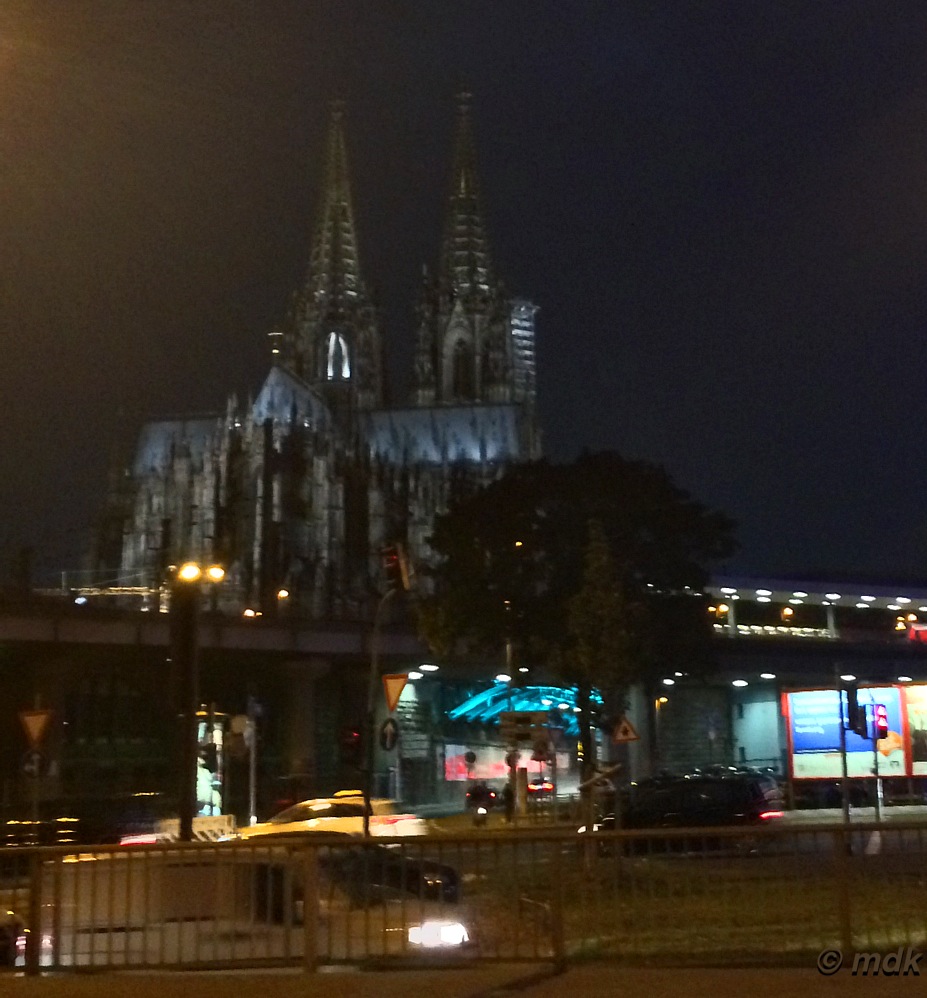 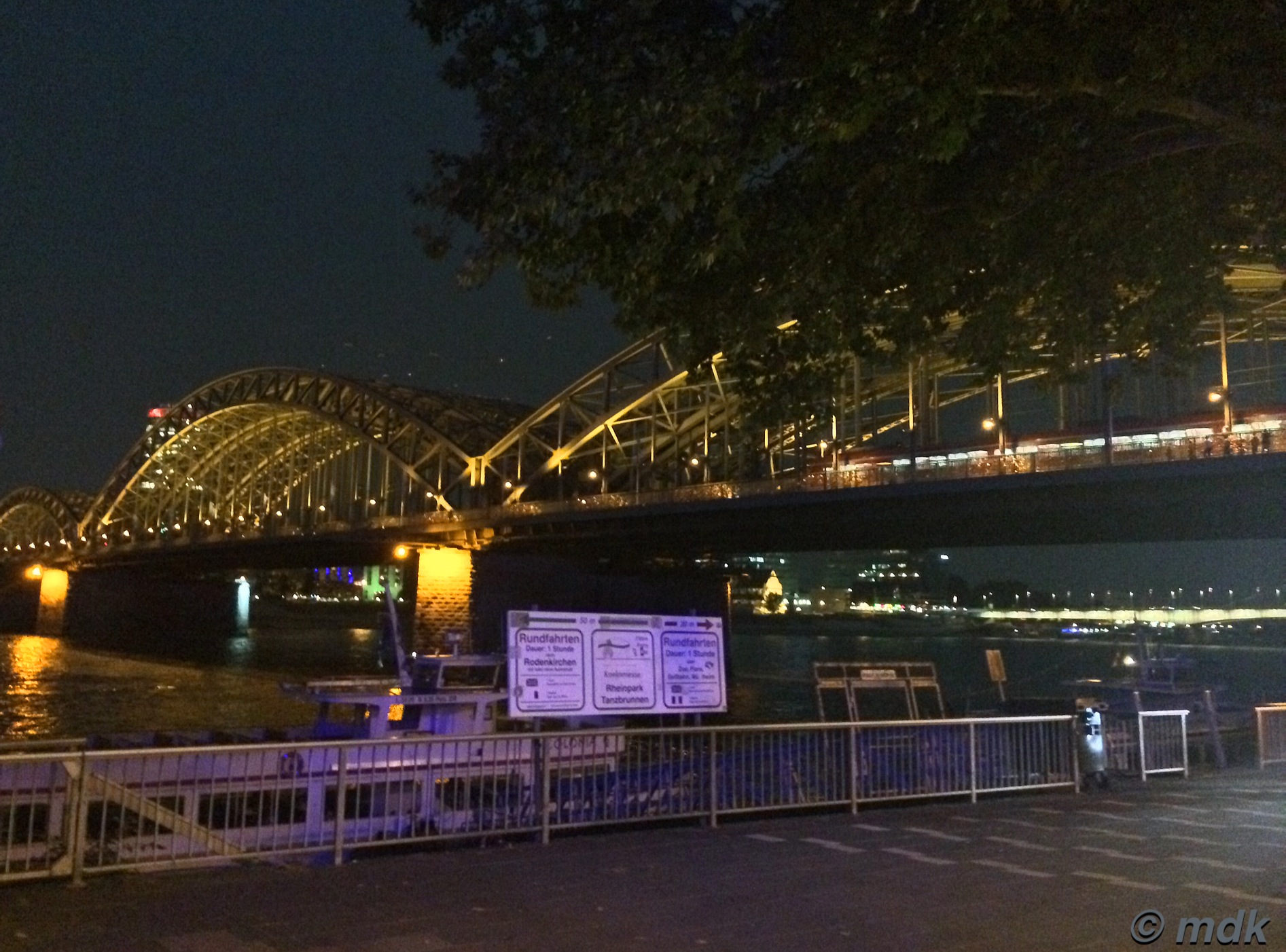 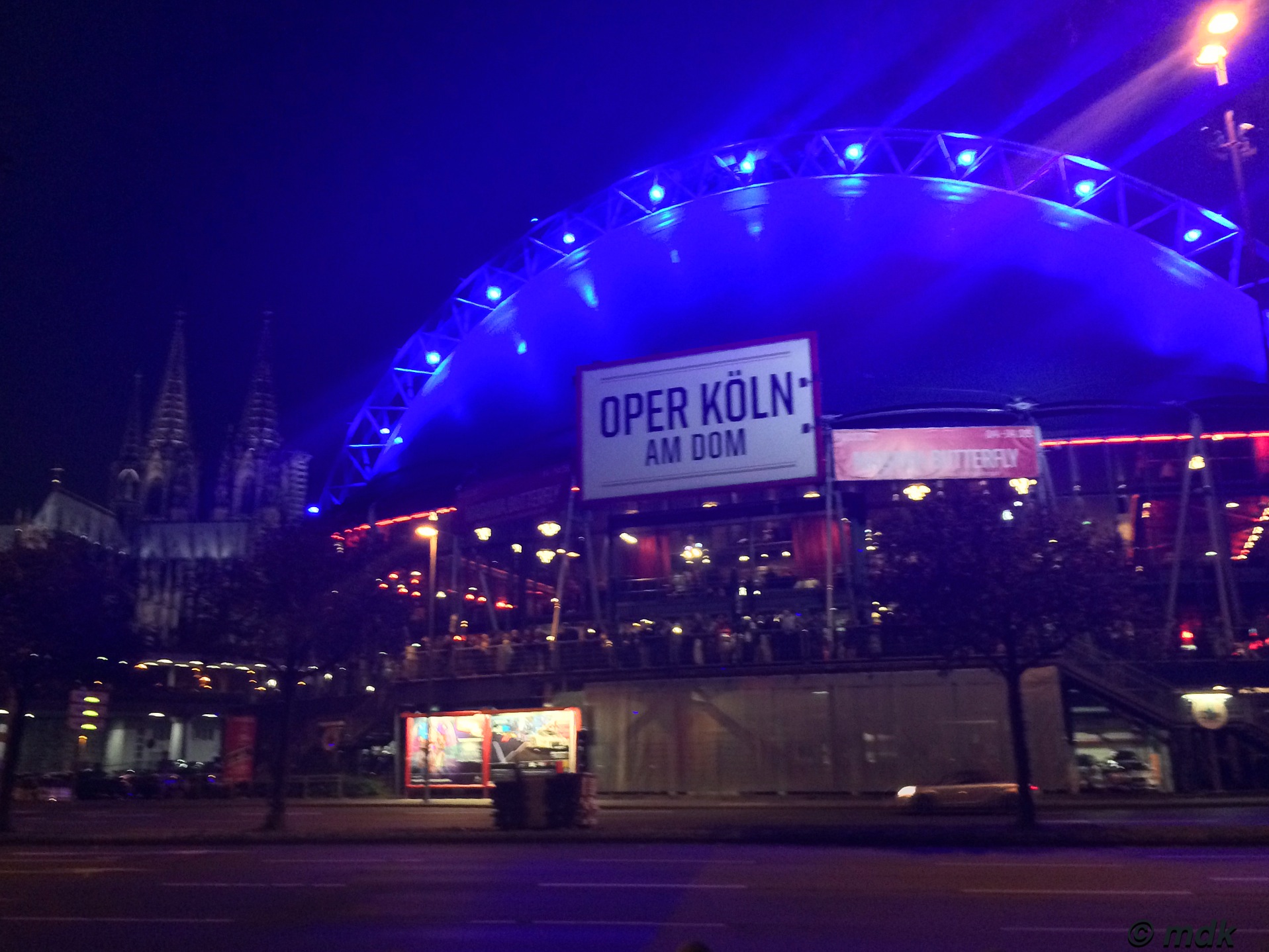