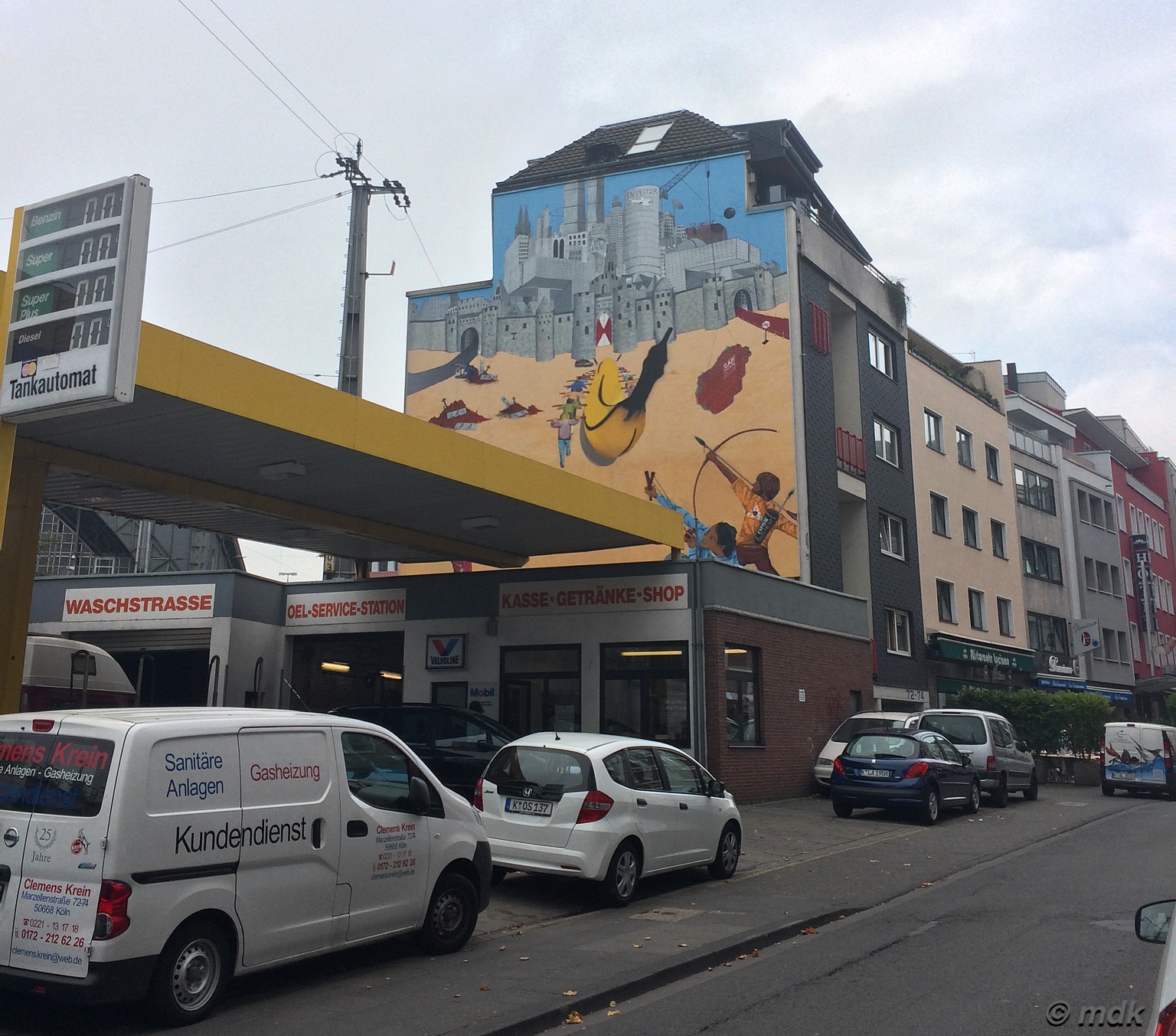 In September 2014 Marathon day minus one was mostly about sight seeing and relaxing. After all we were still slightly tired and jaded from a day of travel. We set off after a hearty breakfast of granola with lots of seeds nuts and cranberries. As ever, Commando ate far more than I but then he was carb loading. The last thing I need to do is load up on carbs. There was no real plan although Commando wanted to check out the finish line as he’d read it had been erected by the Cathedral the night before. For me it was more about a trip down memory lane.

There seemed to be more beggars than ever under the arch of Eigelsteintorburg and we decided to visit the supermarket on our way back. We wanted bottled water and didn’t want to lug it around with us all morning so we carried on up the shop filled street towards the cathedral. There was some interesting, if enigmatic, graffiti on a wall above a petrol station. Maybe you have to be German to understand the significance of people shooting arrows at a giant banana, which is also being used as a battering ram.

Just before we came to the cathedral we spotted the marathon finish line. Several other runners were having a look at it too. There wasn’t exactly a lot to see but at least we knew where it was. Moving on we stopped for a while amongst the throngs crowded outside the cathedral but the sun was in the wrong place for decent photos so we decided to wander around a bit, get our bearings and come back later for a proper visit. 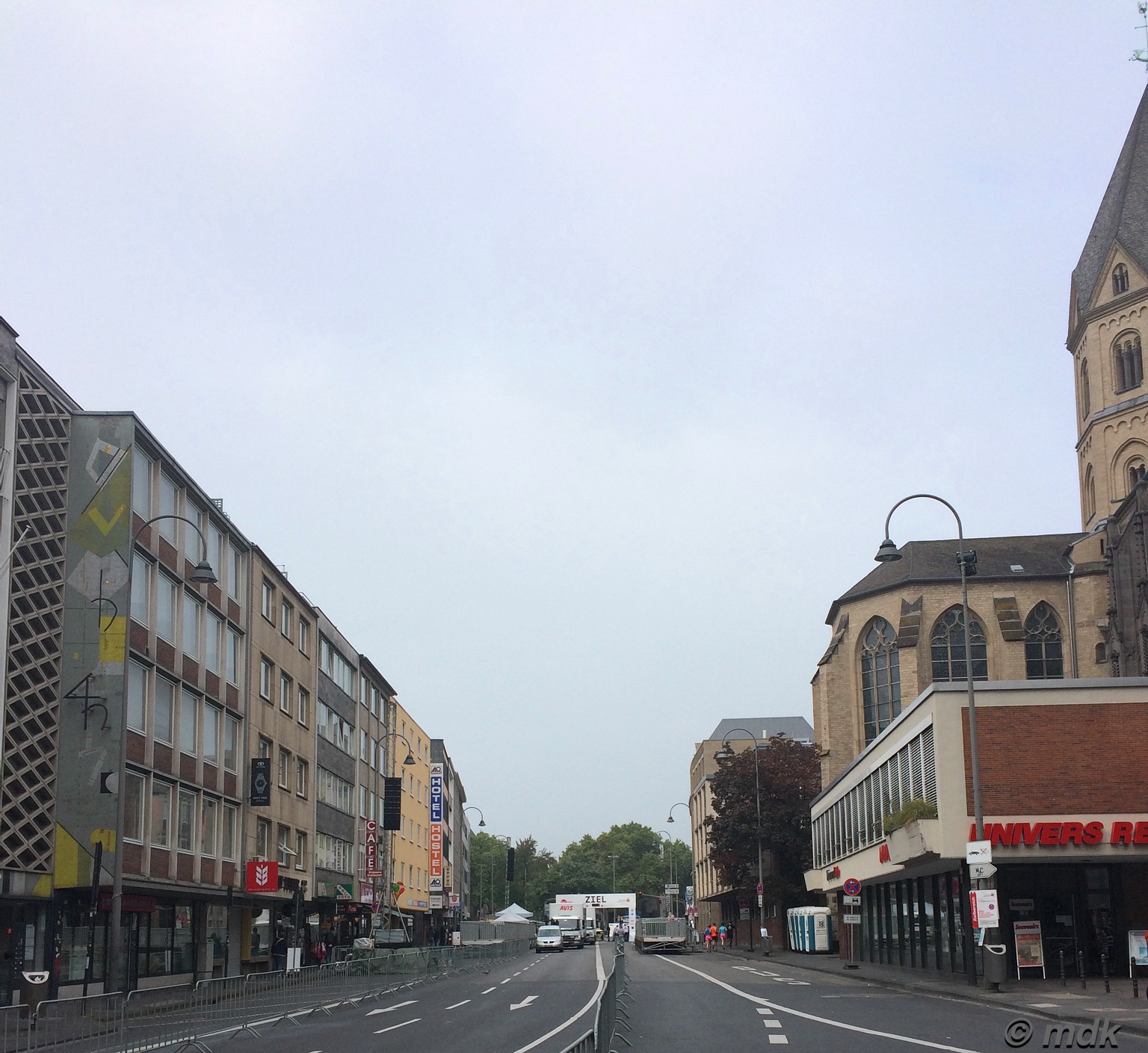 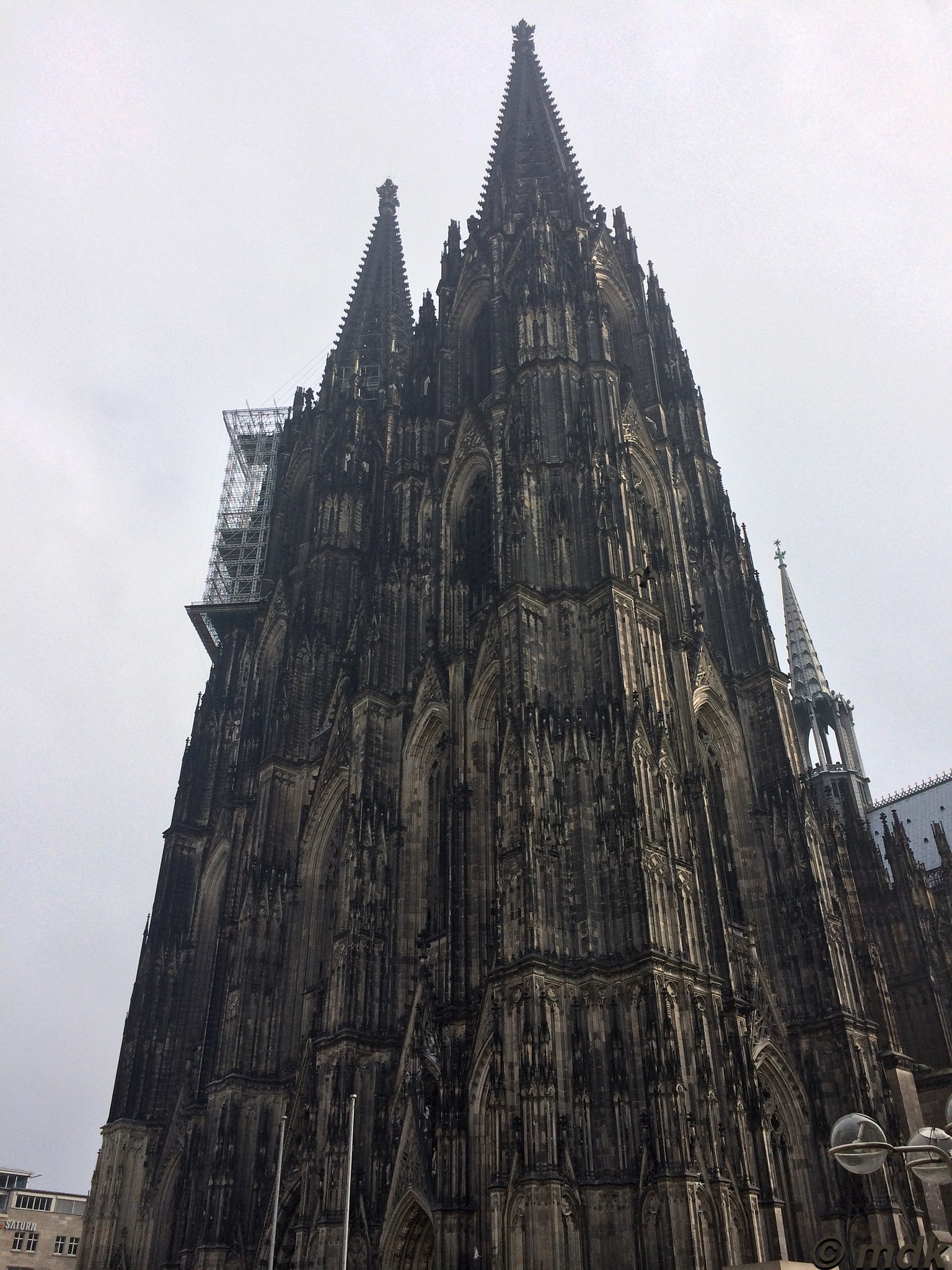 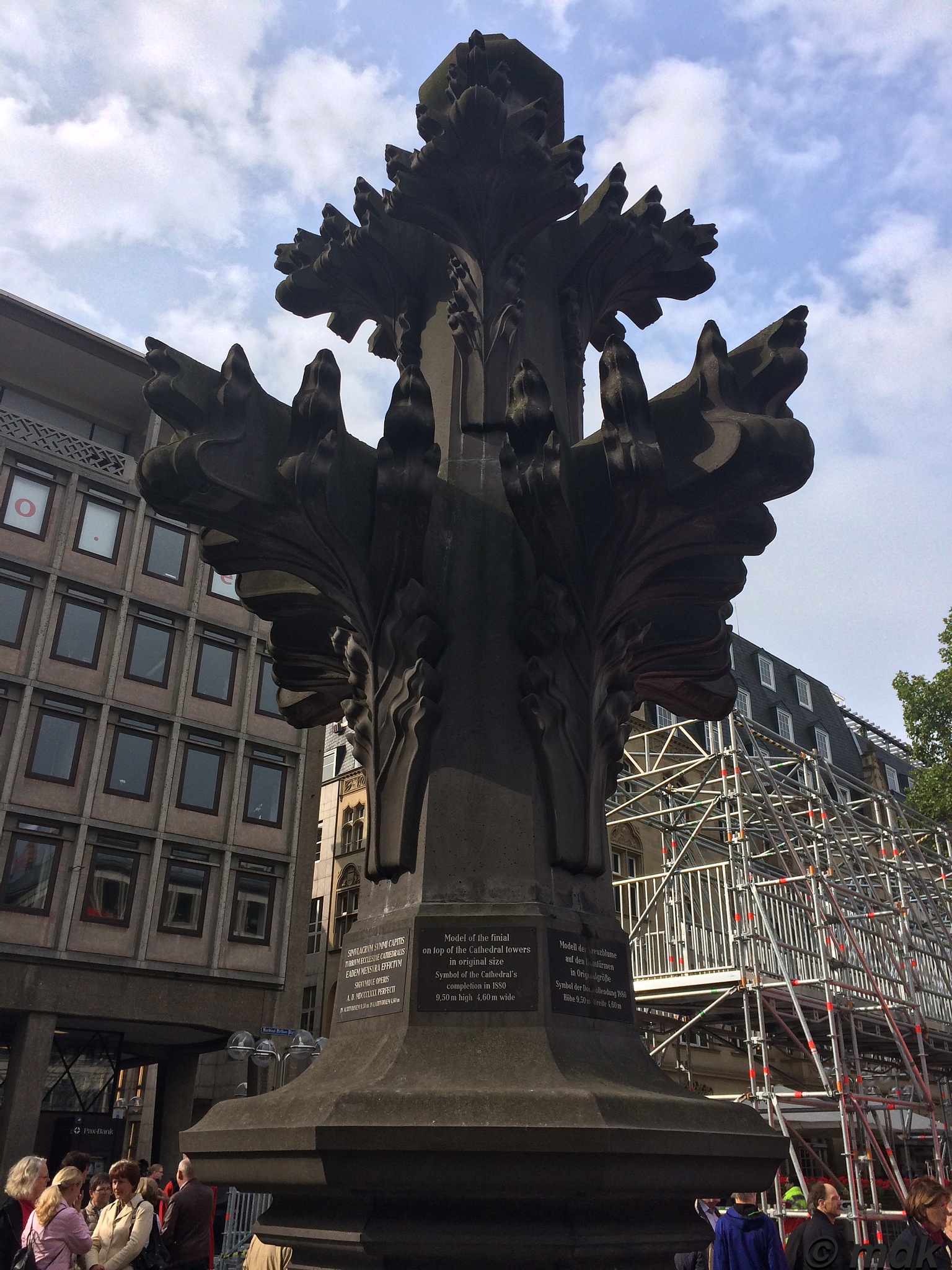 A little further down the road we spotted something else that is very symbolic of Cologne, the 4711 shop. On my first visit to Cologne I bought a small bottle as a souvenir, after all, this is the very thing that made the city so famous. Eau de Cologne is a spirit based, citrusy, perfume launched in Cologne in 1709 by Italian perfume maker Giovanni Maria Farina. The fragrance reminded him of an Italian spring morning, mountain daffodils and orange blossoms after the rain, or so he said, and he named the scent after his adopted city, Cologne. Little did he know how famous the name would become or that the city would be forever synonymous with perfumes of all kinds.

The original Cologne 4711, named after 4711 Glockengasse where it was first made, is still produced today and is one of the oldest perfumes in the world. The exact formula is still a closely guarded secret. At the time no one had ever made a perfume like it and it caused quite a stir. A single vial cost far more than the average man could afford and it was thought to ward off bubonic plague. Of course it wasn’t long before others made copies, calling them Eau de Cologne. The name Cologne fell into usage to mean any perfume and is still used today. 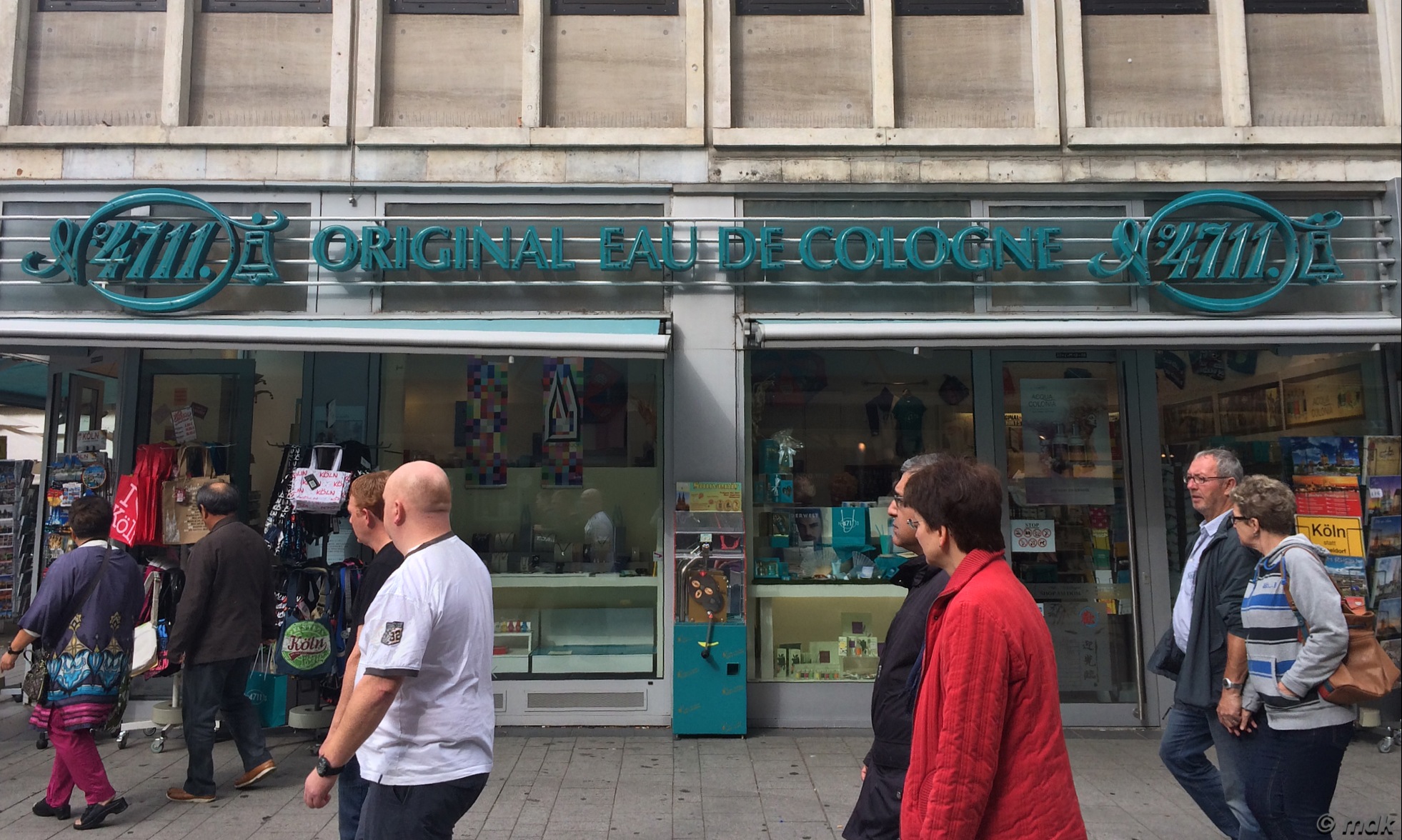 We didn’t stop to buy any cologne this time but, across the road we spotted a bakery with lots of different types of brezels and, the large donuts called Berliner Pfannkuchen or Berliners for short. Essentially these are just big jam doughnuts but they are a traditional delicacy and I sampled one on my first visit to Cologne. Of course, there was no way we could pass by without buying some, even though breakfast hadn’t been that long before and I’m not exactly a fan of sweet doughnuts. They were as delicious as I remembered but I’m sure they are smaller these days.

Back in 1980, my host, Bren, had told me the story of President John F Kennedy, who, when he gave his famous speech in West Berlin on June 26, 1963, underlining his support of the people of Berlin after the erection of the Berlin Wall, made a slight faux pas. When he said “Ich bin ein Berliner” his use of the indefinite article, ein, meant he was really saying I am a doughnut. Of course, no one misunderstood, and this was actually considered to be one of Kennedy’s finest speeches, but it is amusing to think of the president announcing to the world that he’s a jam doughnut. 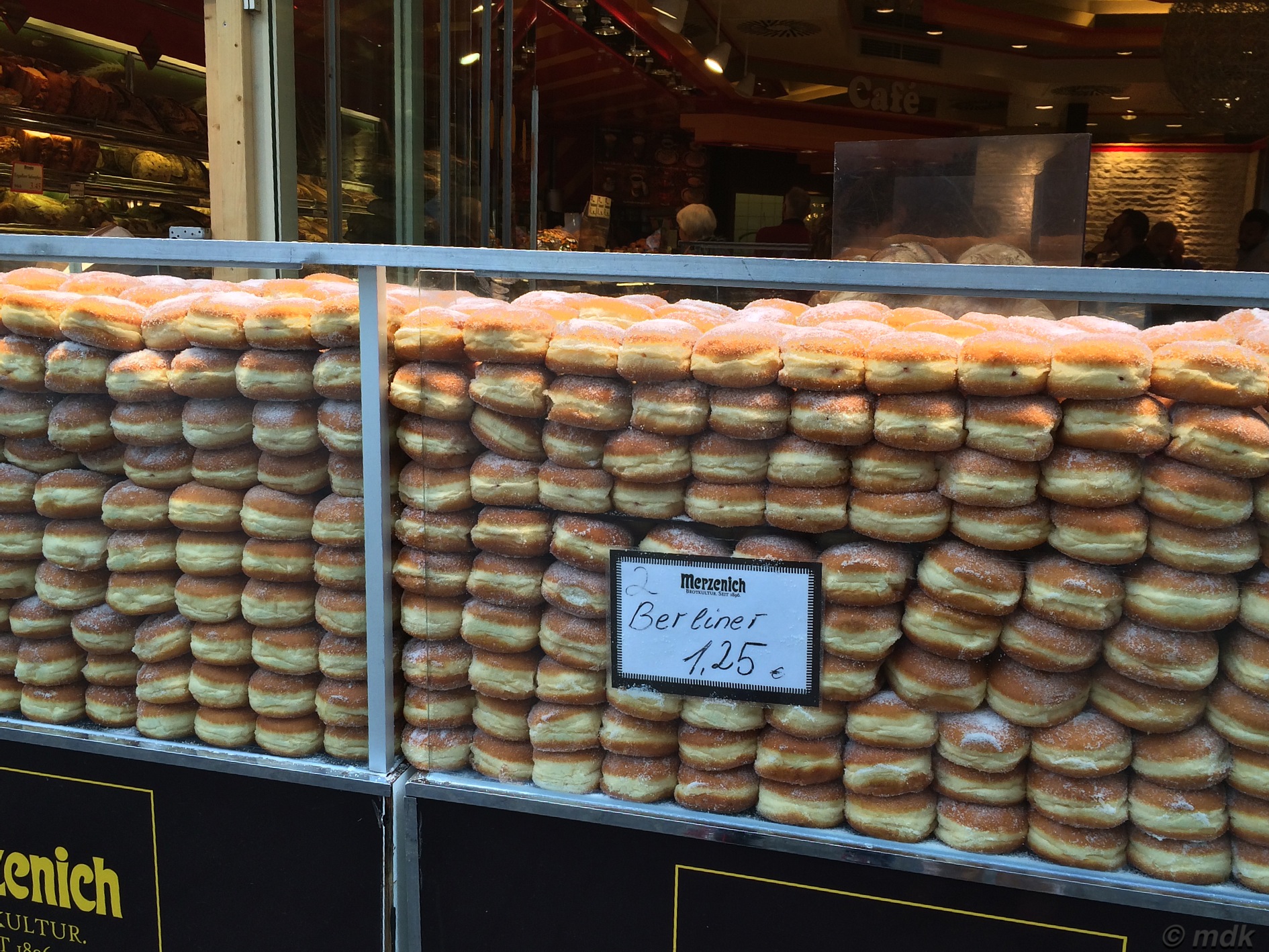 We strolled along eating our Berliners, window shopping and enjoying the sights and sounds of the city. Trams had to be watched out for and we stopped for a moment to listen to an orchestra set up in the middle of the street complete with rows of chairs for an appreciative audience. There was the usual mix of street artists and beggars, some with a rather original take on the begging game but most sitting, faces downcast, looking ashamed at their predicament. Perhaps this is the proscribed manner of begging in Germany. 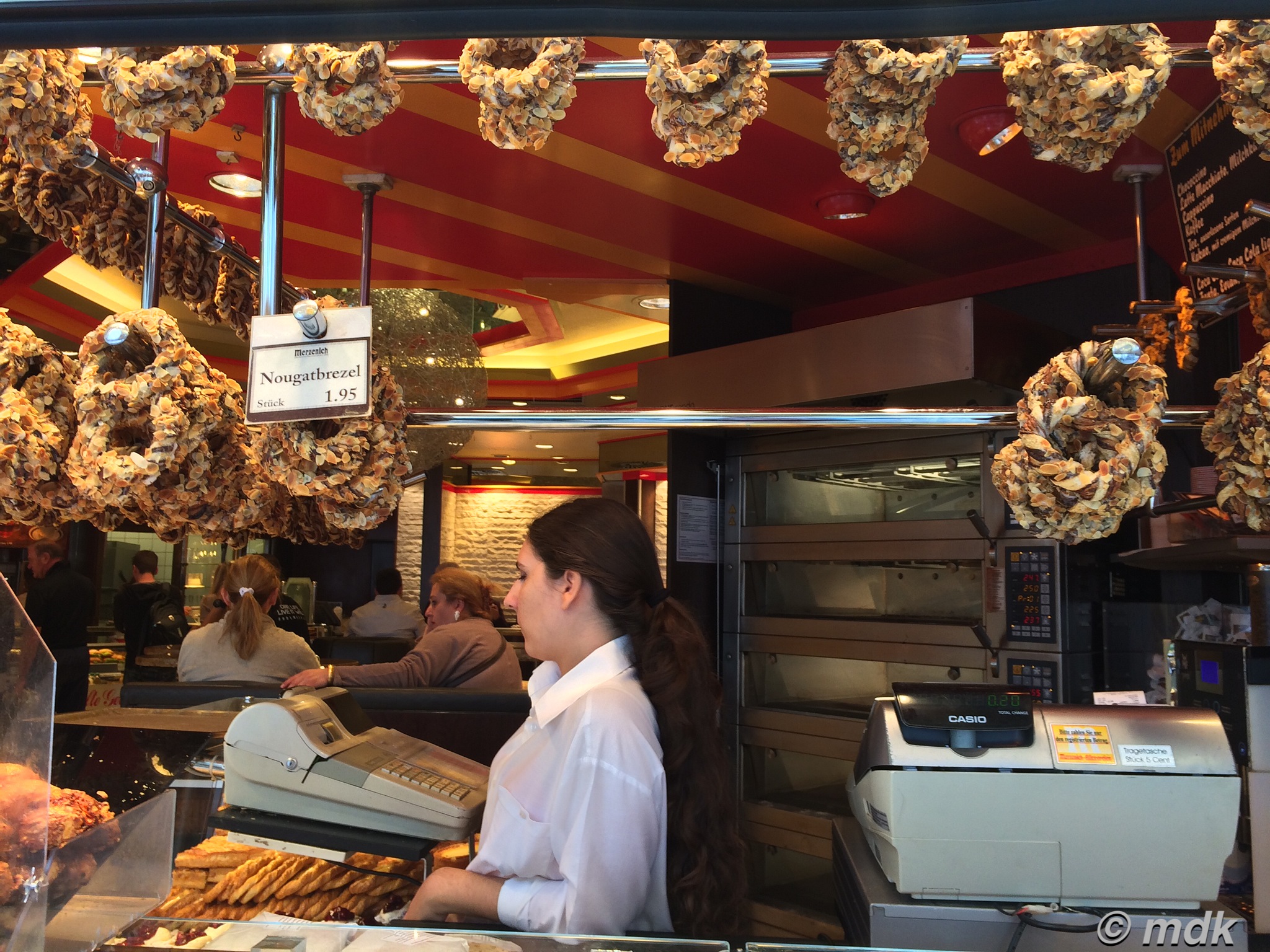 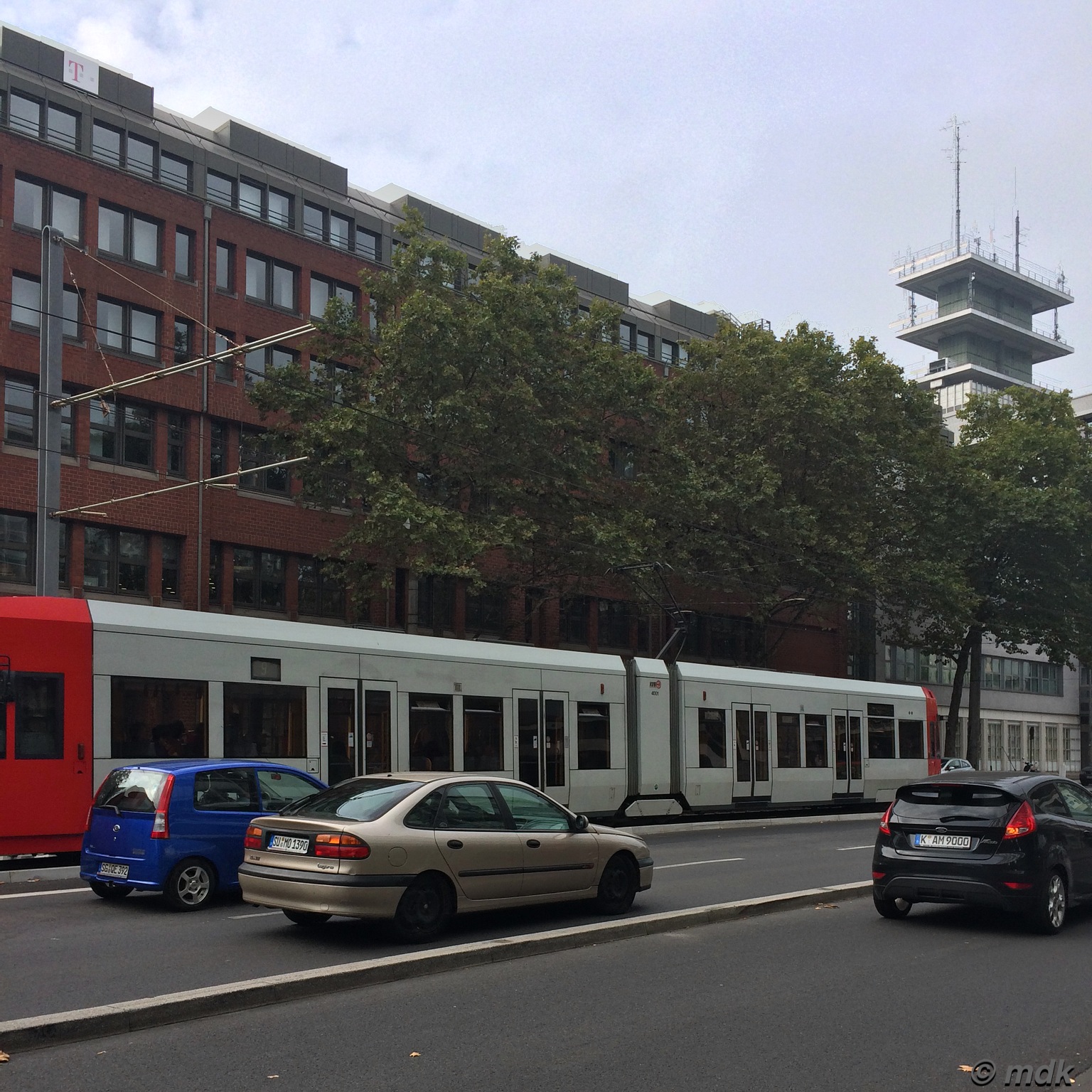 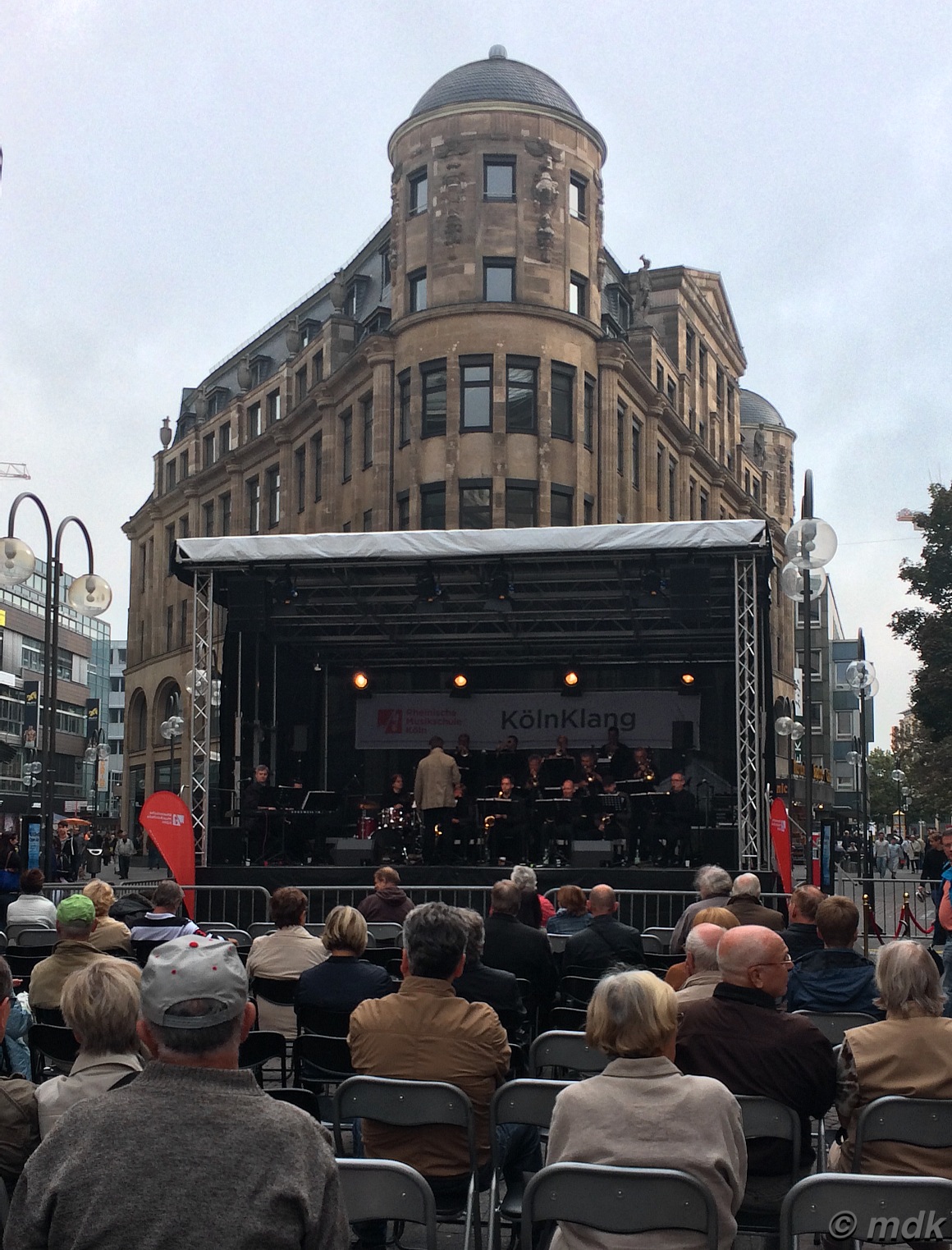 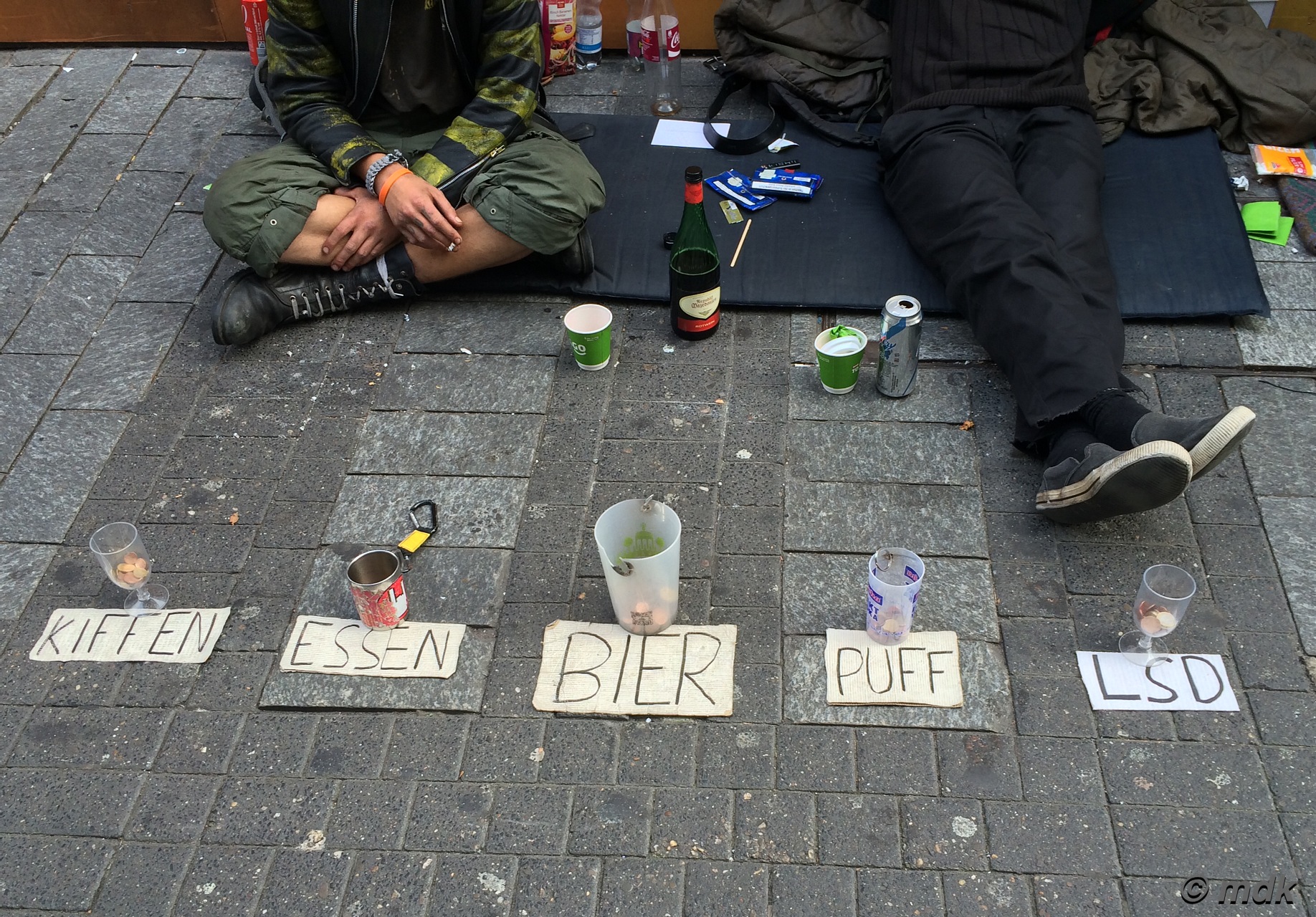 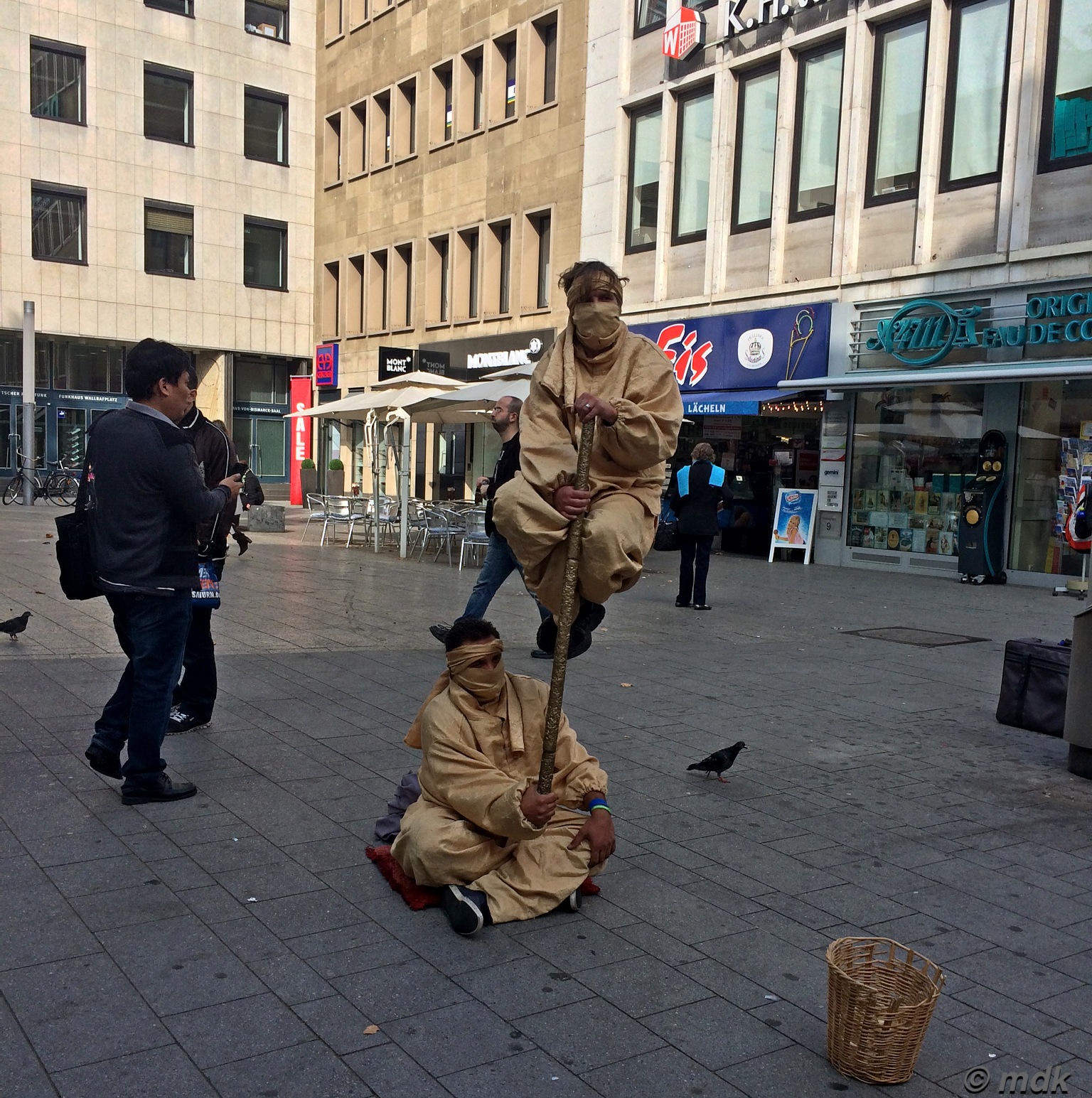 We did find a sports shop where Commando added to his collection of football scarves from the different countries we’ve visited. There was also a little shop selling love locks padlocks and I made a mental note just in case we had time for a romantic gesture before we went home. After that we made our way back to the cathedral hoping for better light.

The light was better but there were so many people about it made taking photos of the outside of the cathedral difficult. Instead we walked up to the ornately decorated doors and went inside. When I last visited Cologne cathedral one of my best childhood friends had died aged just nineteen. At school Bren, Liz and I had been inseparable and her death had hit Bren and I hard especially as it was just before Bren’s wedding to Johannes and a move to Cologne. Neither of us were particularly religious but the symbolism transcends all faiths and beliefs and we both lit a candle in memory of Liz.

When Bren and I visited the cathedral back in 1980 I remember it being empty and quiet, this time it was as crowded inside as out. The first thing I noticed were the votive candles, tea lights now rather than real candles, and my thoughts turned immediately to Liz. Back then I’d placed a handful of Deutschmarks in the donation box, this time it was Euros and the candle I lit was in memory of Commando Senior and April. I don’t mind admitting I shed a tear. 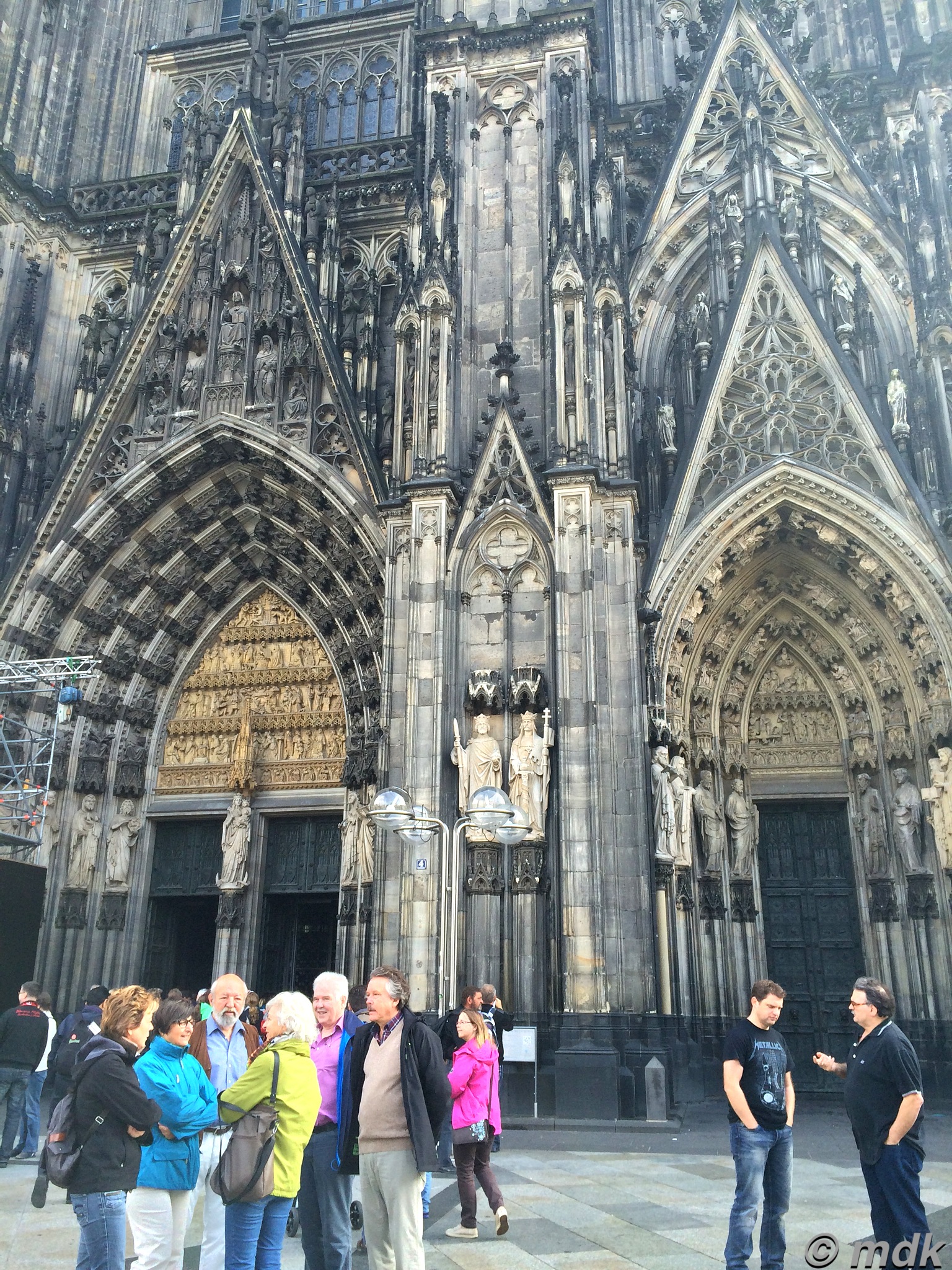 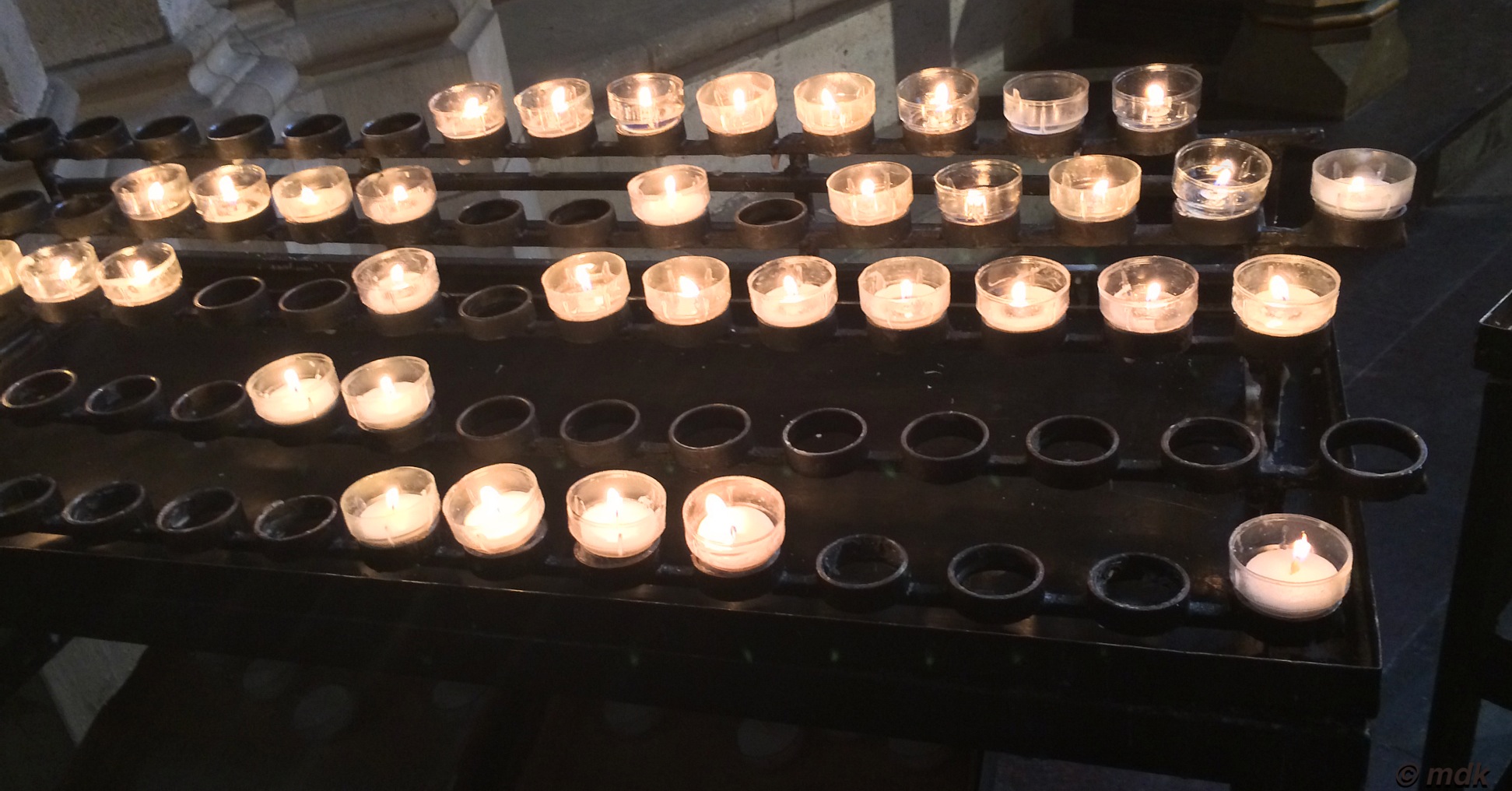 The other thing I remembered was the beautiful stained glass windows. For all my love of old churches I rarely go inside and I really should make more effort because the windows are some of the best features and Cologne cathedral has some of the best I’ve seen. We walked around admiring them along with the lovely vaulted ceilings and pieces of damaged masonry before descending into the crypt. 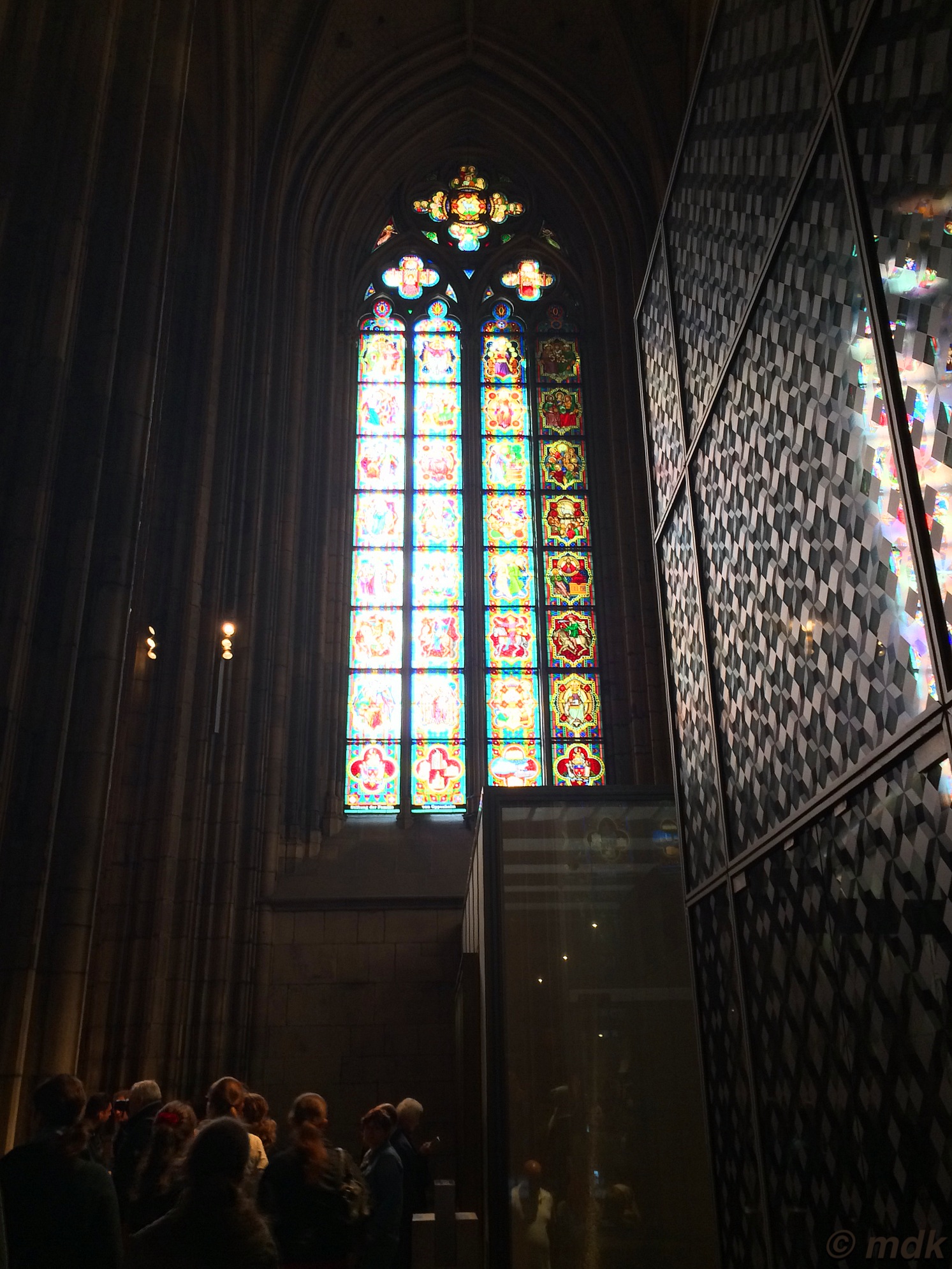 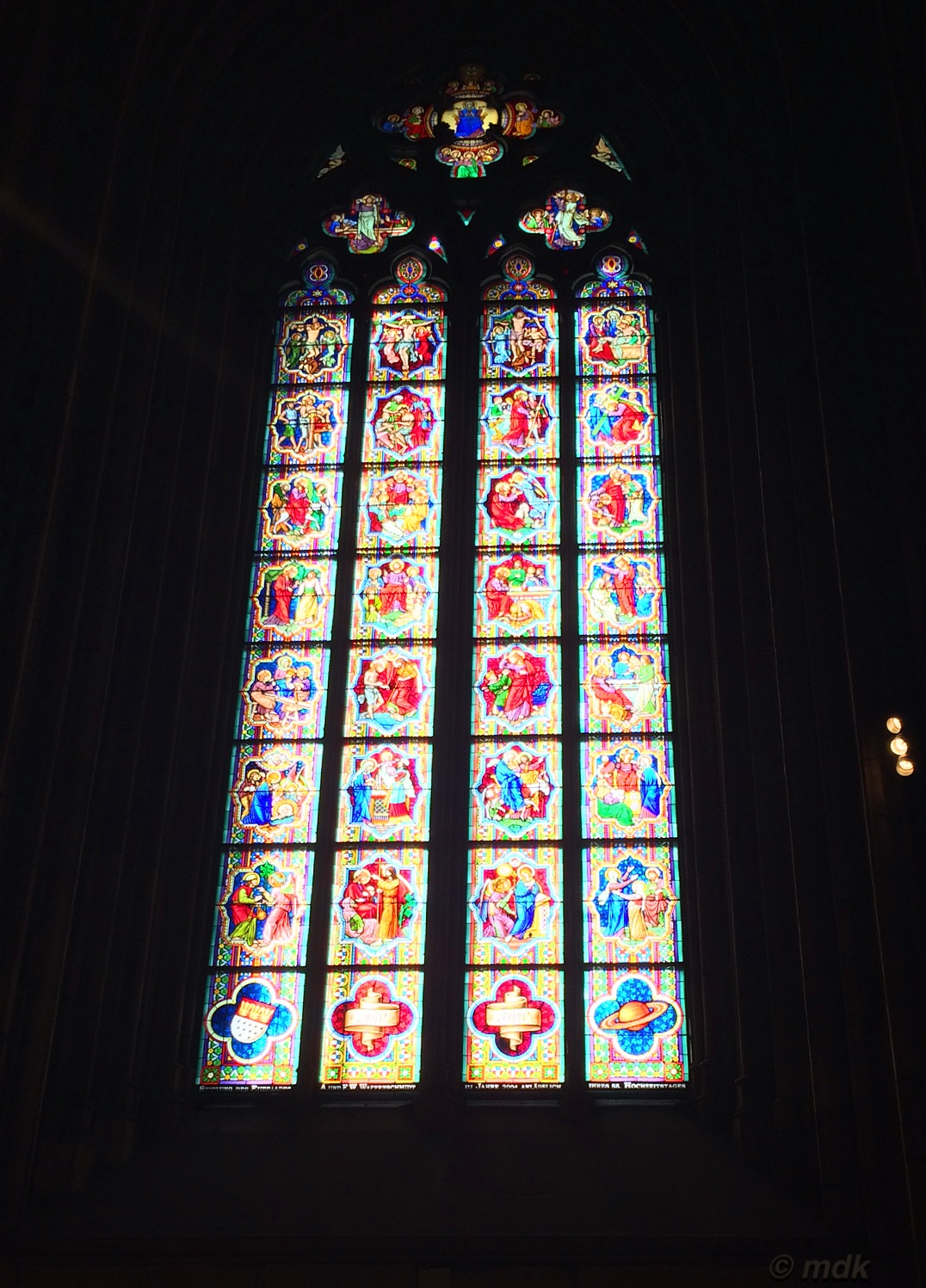 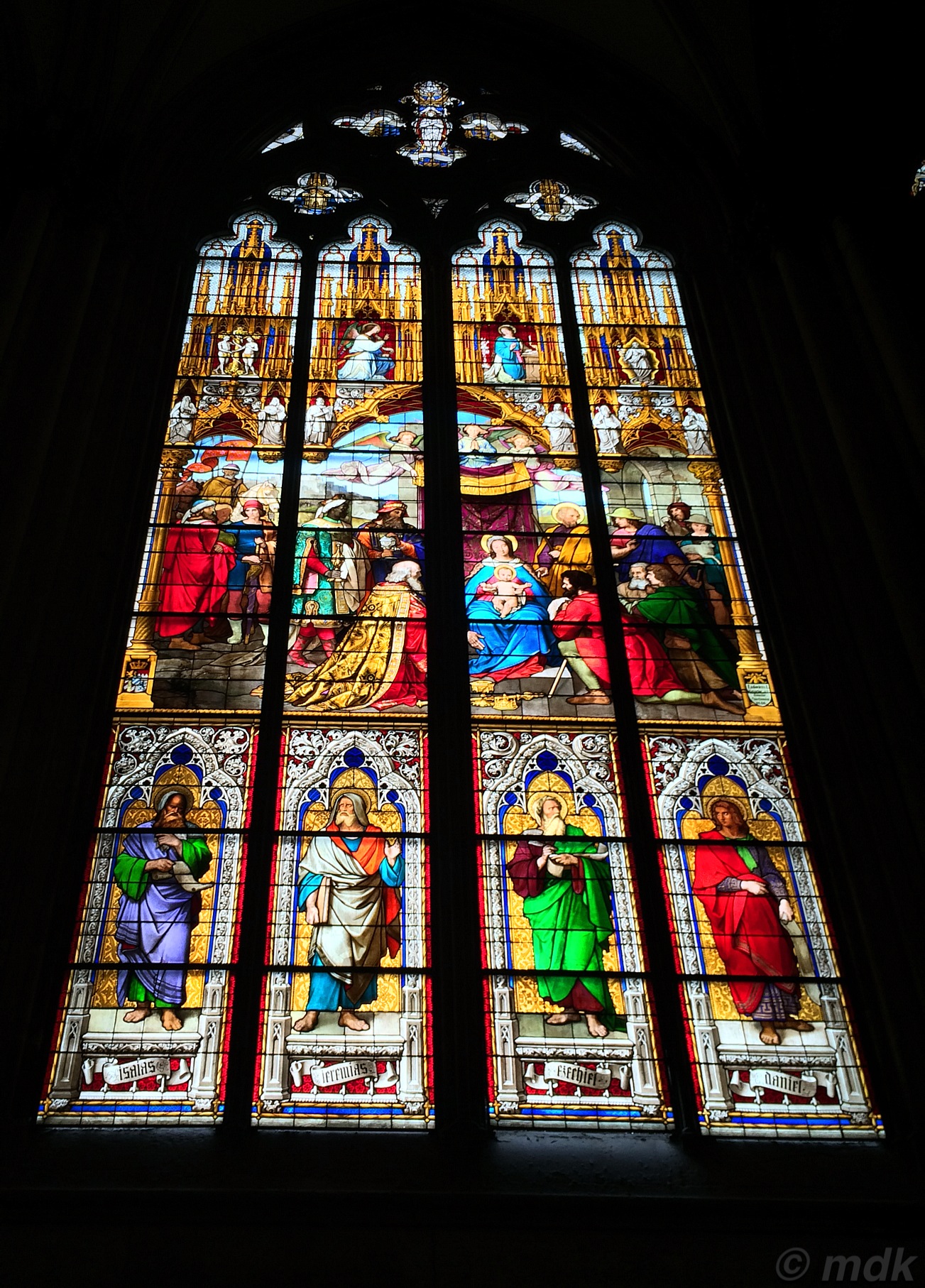 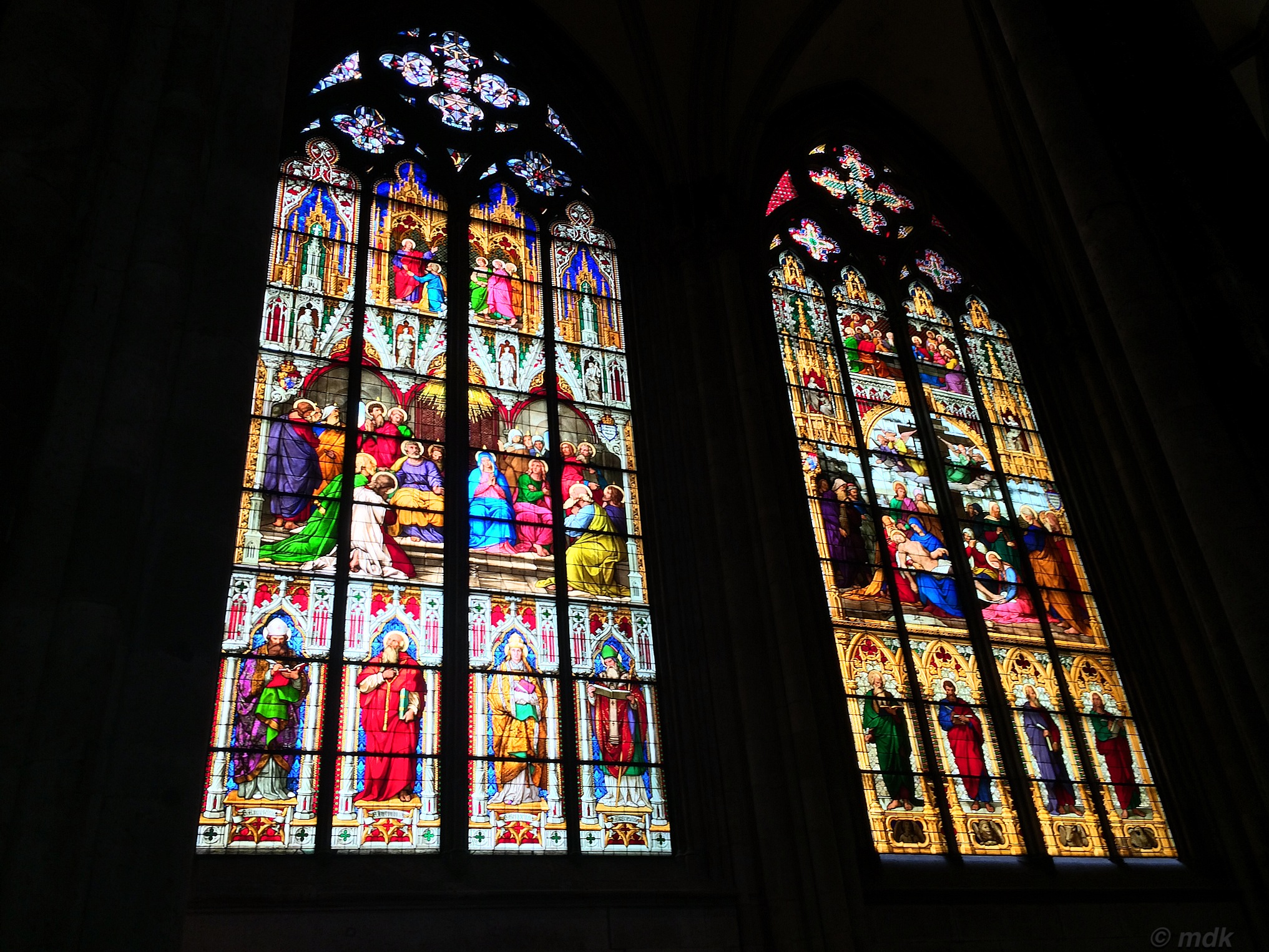 The light was not the best and the small space was crowded. Even so, I took photos of slightly macabre tombs, ornate gates and the brickwork of the old building. Cologne Cathedral or, Kölner Dom, is the seat of the Archbishop Cologne and Germany’s most visited landmark so I don’t know why I was surprised by the crowds. To me it is reminiscent of the Sagrada Família in Barcelona and there are certain parallels. 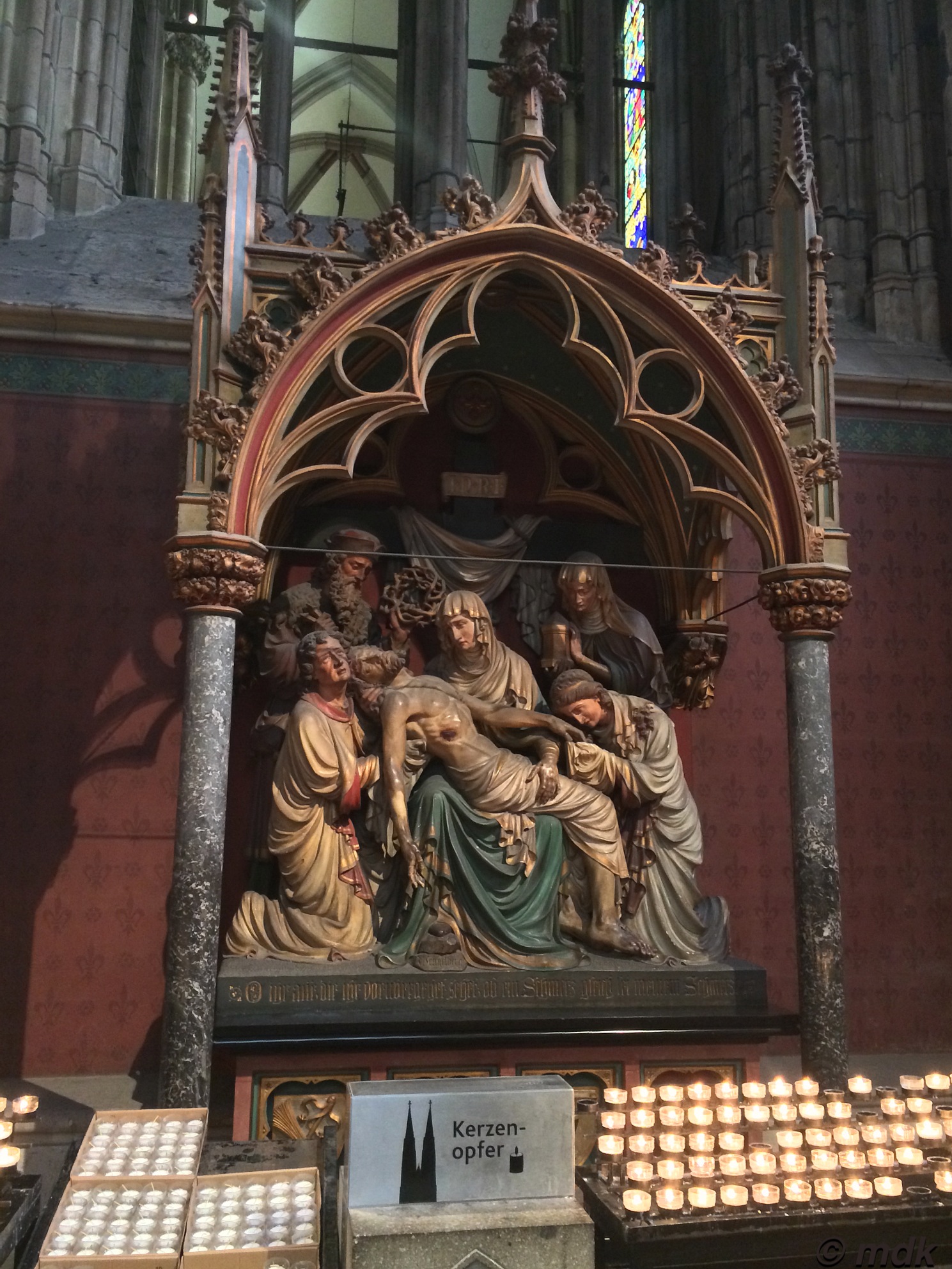 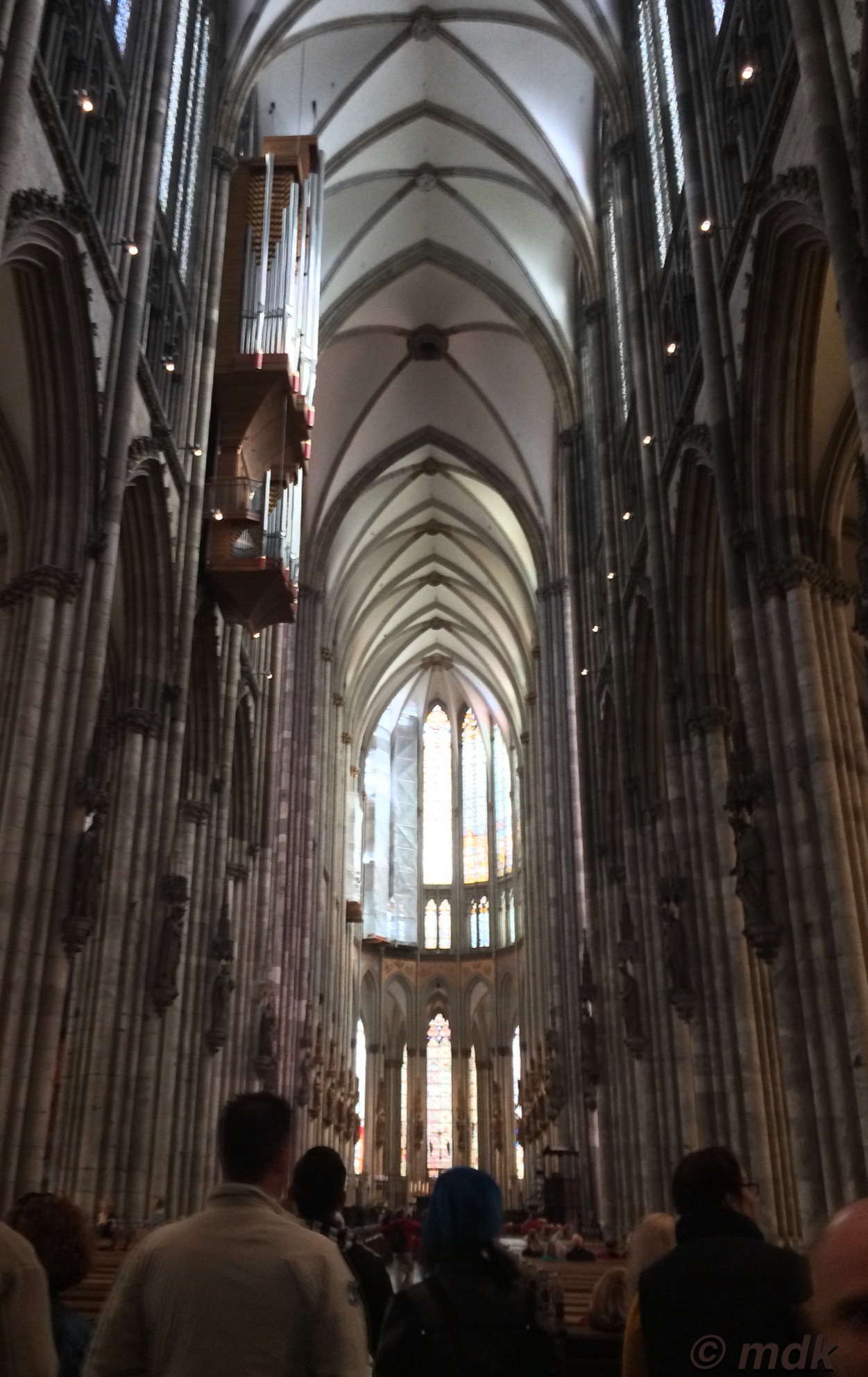 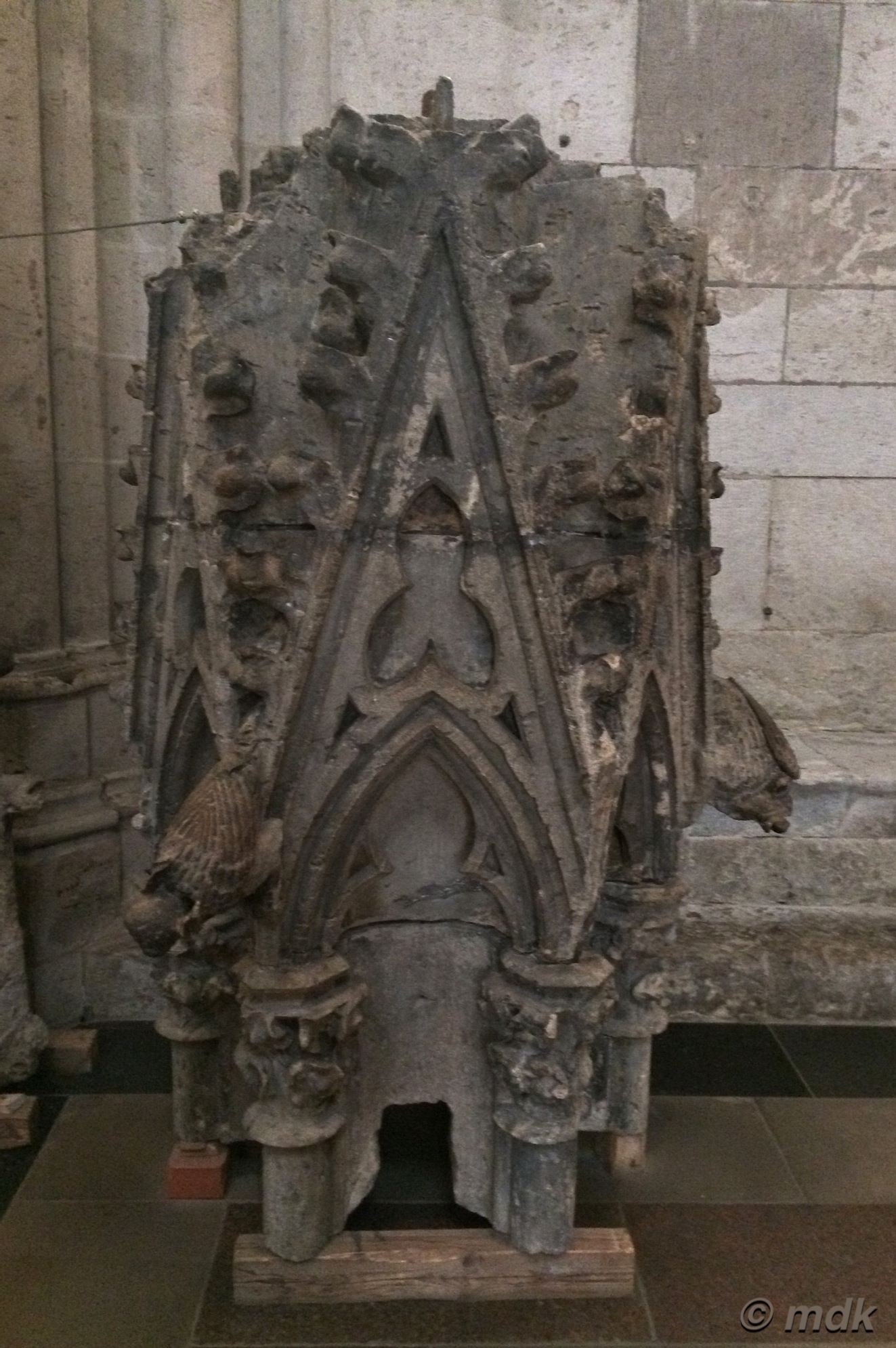 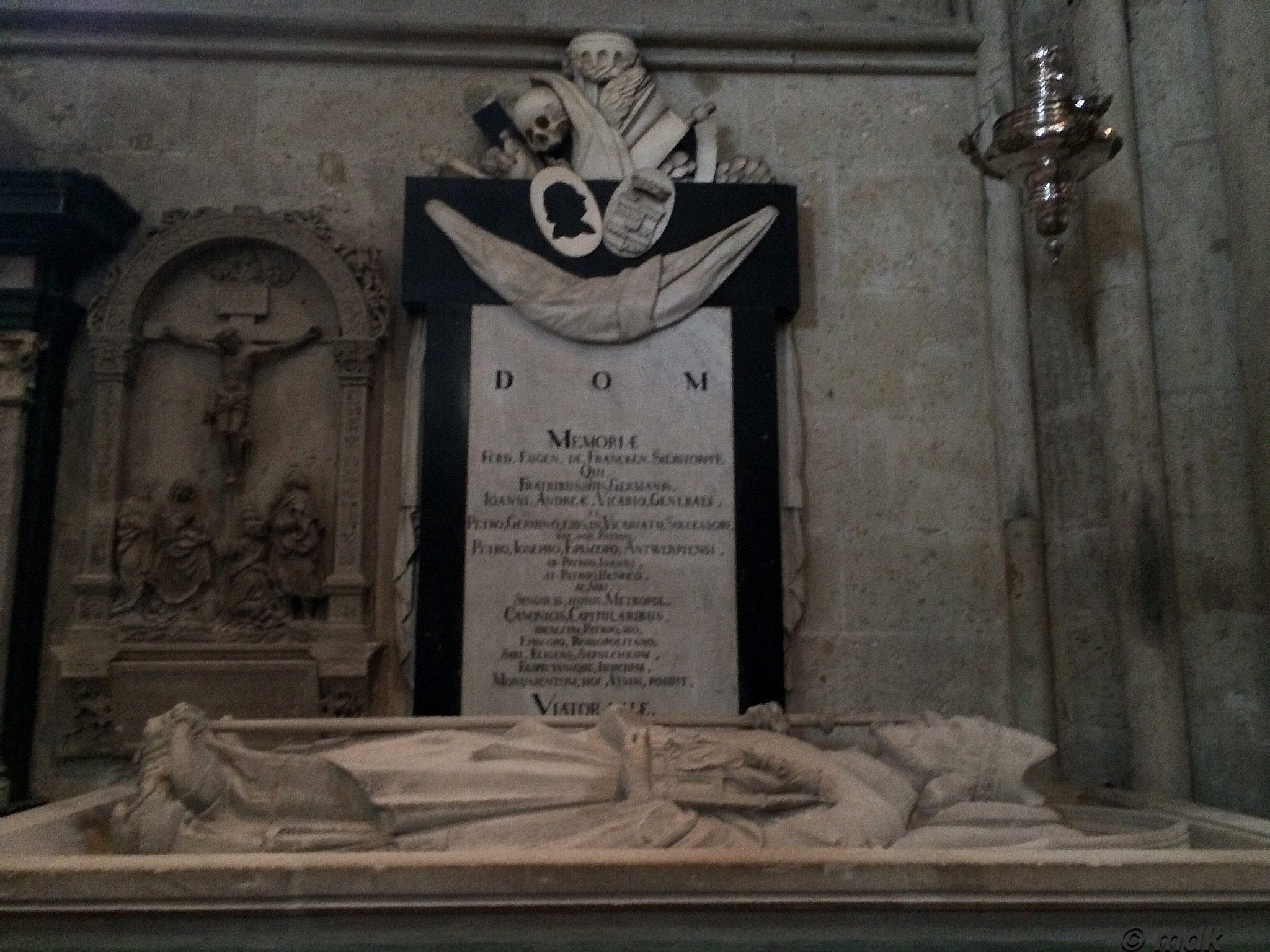 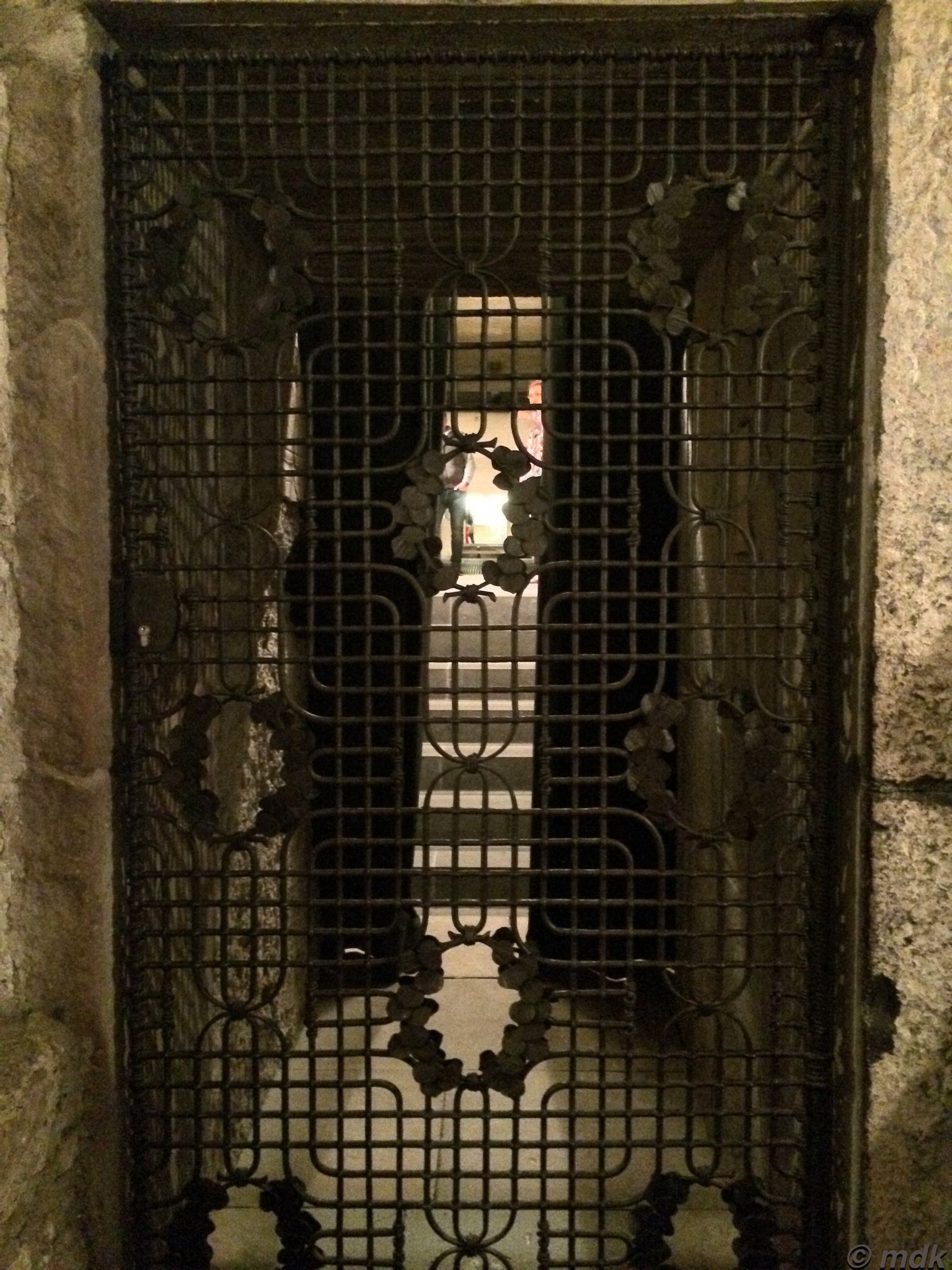 Building began in 1248 but was halted in 1473 when the cathedral was still incomplete. The south tower stopped at the belfry level and for four hundred years a huge crane dominated the skyline of the city. In the nineteenth century work began again and it was finally completed in August 1880 six hundred and thirty two years after the first stone was laid. Maybe one day Sagarda will also be finished.

This is the largest Gothic church in Northern Europe with the second tallest spires and, like Sagrada, it is a landmark that can be seen from all over the city. Unfortunately for Cologne, those spires were used by Allied bombers as a navigational landmark and the city of Cologne was flattened during World War II. The cathedral, being close to the central railway station and Hohenzollernbrücke, was hit fourteen times by Allied bombs but survived. In part it’s usefulness as a landmark may have saved it from destruction. By 1956 the war damage had been repaired but rain and pollution slowly eating away at the stones mean it is rarely free of scaffolding. 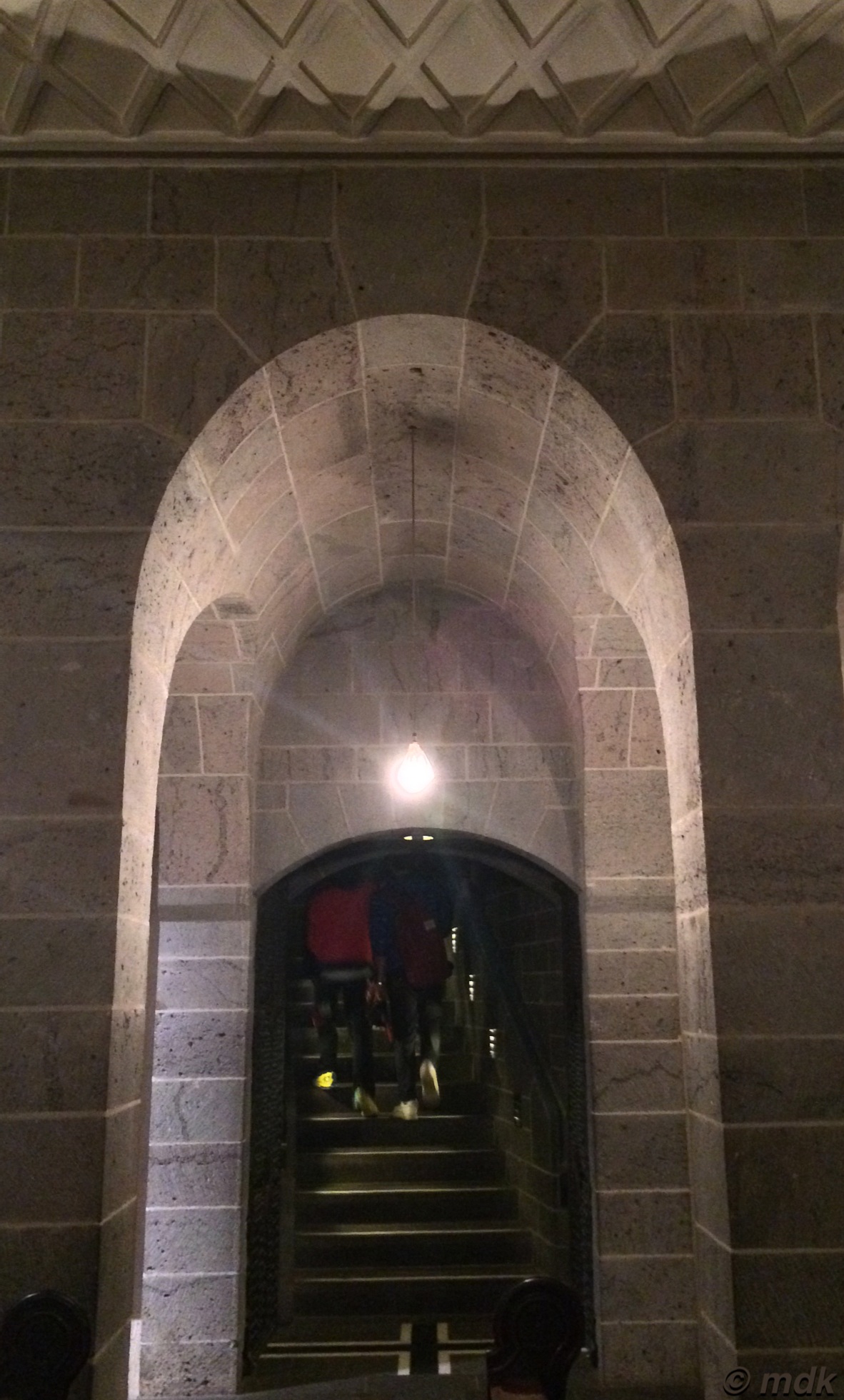 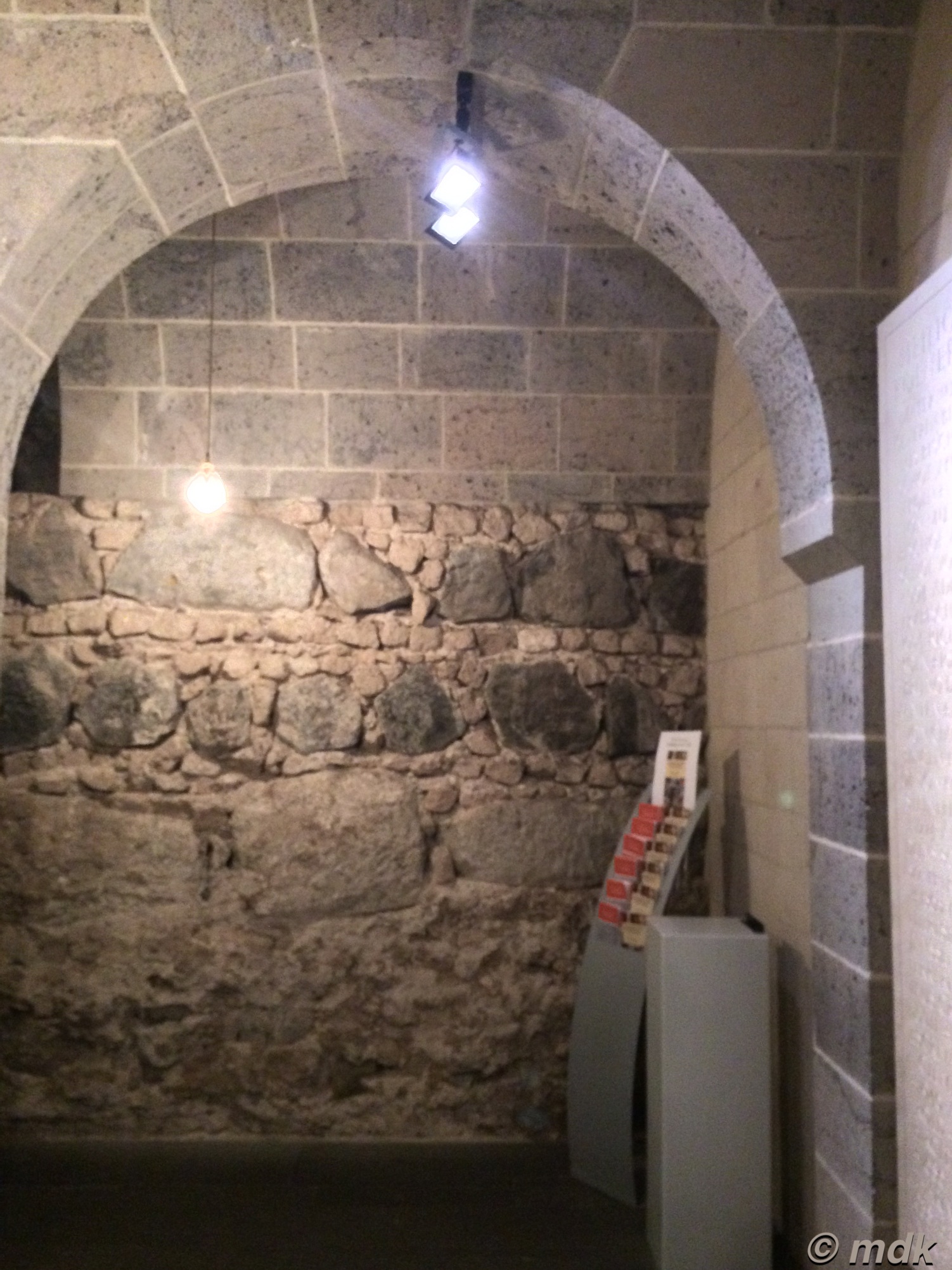 There are many beautiful works of art in the cathedral but time and crowds meant I didn’t take photos of many. In fact the shrine of the Three Kings, created by Nicholas Verdun in 1190 was so crowded I barely got close enough for more than a glimpse. It is believed to hold the remains of the Magi and is made of gilded bronze and silver and encrusted with gemstones. There may be some truth in the story of the Magi as, when the shrine was opened in 1864 bones and garments were found inside.

With more time and less crowds I could have spent a lot longer inside the cathedral but a service was about to commence and the priests were politely asking people to leave unless they were there to pray. Besides, Commando had a marathon to run the next day and needed to conserve his energy. With a last couple of photographs of the eagle lectern cast in Liége, Belgium in 1854 and one more stained glass window, this one depicting signs of the zodiac, we left. 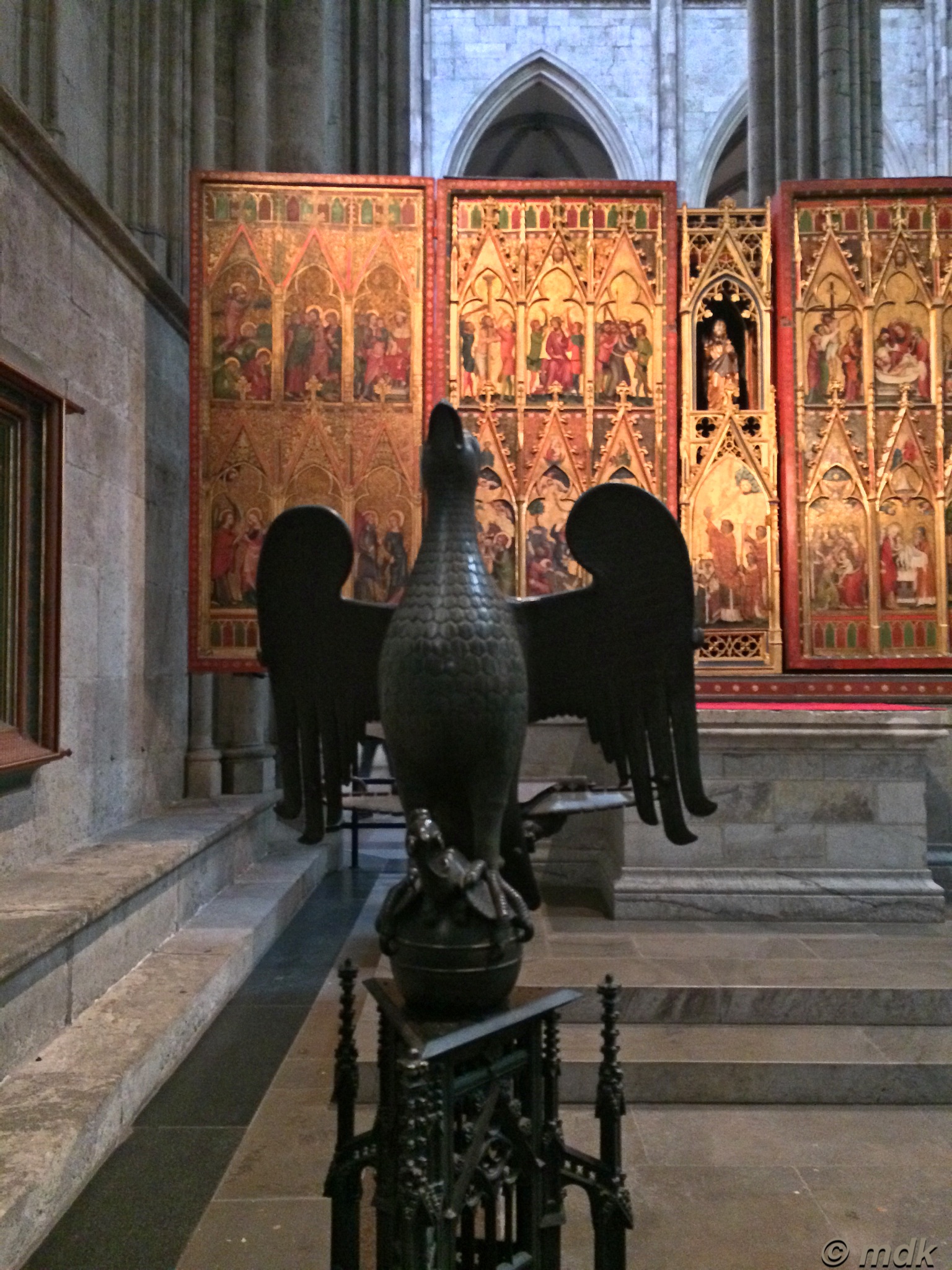 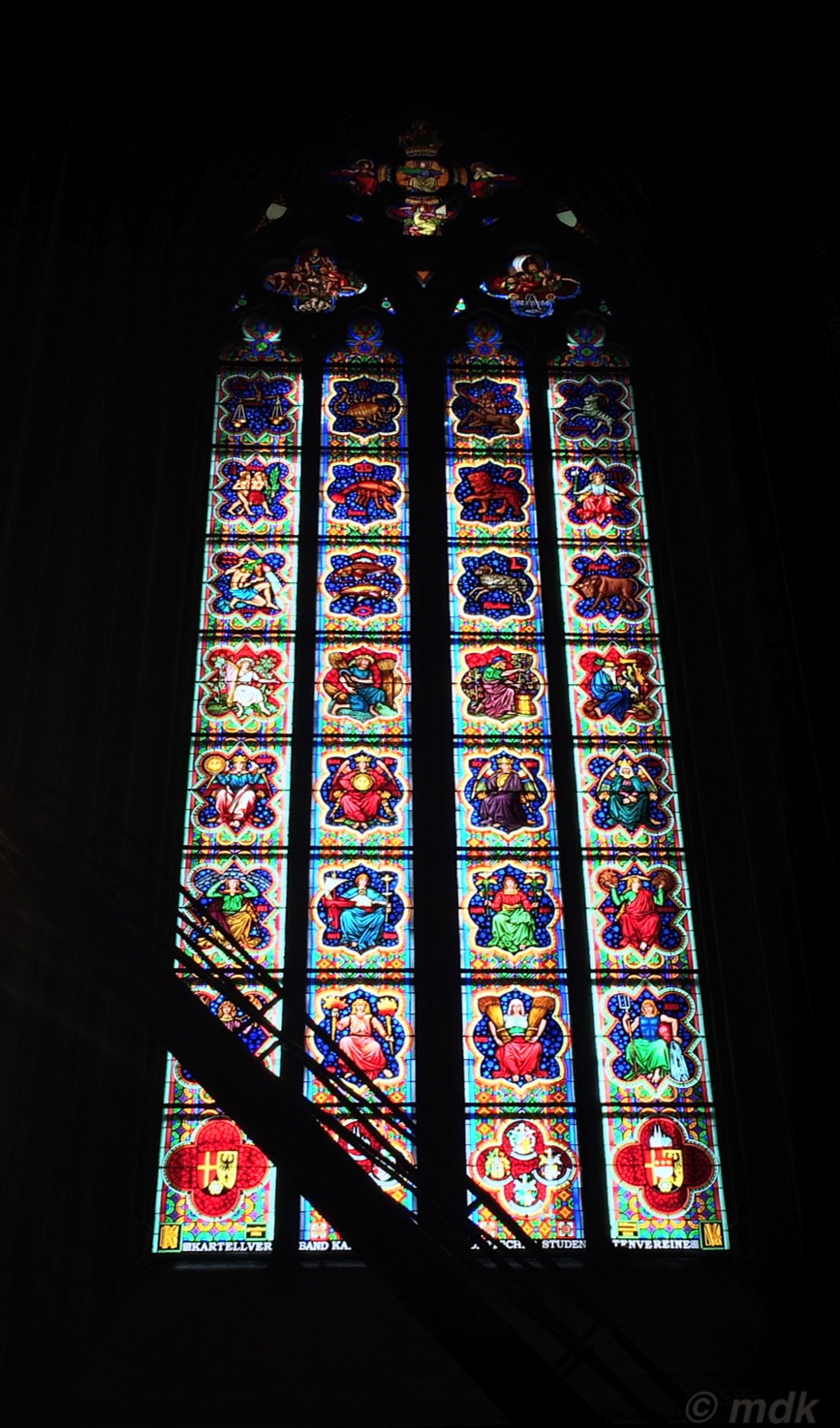 My visit was just a tiny snapshot of the beauty Cologne cathedral has to offer and pictures of the outside would have to wait for another day when the lighting was better and there were less people in the way. Hopefully Sunday would provide some better opportunities. 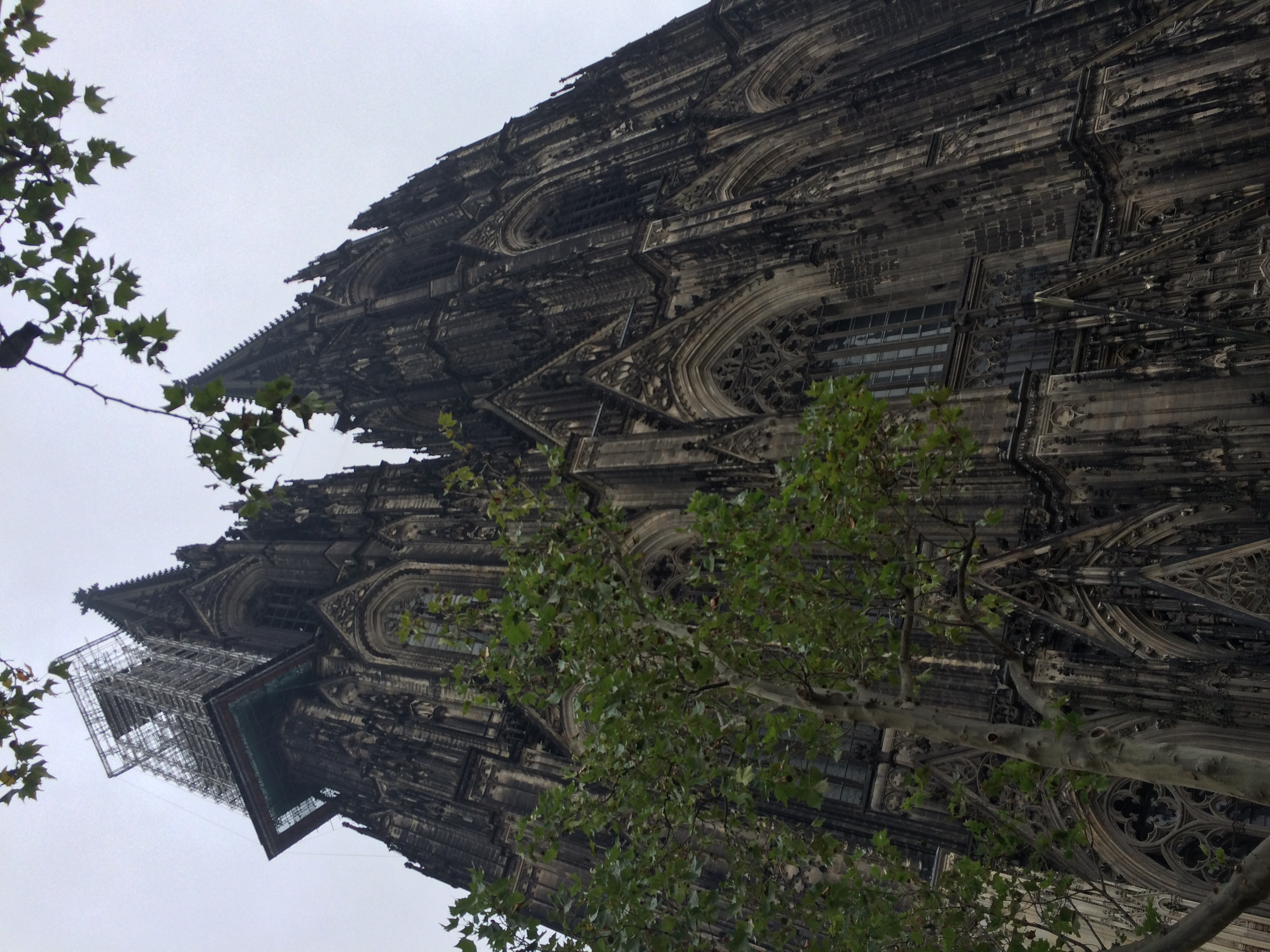 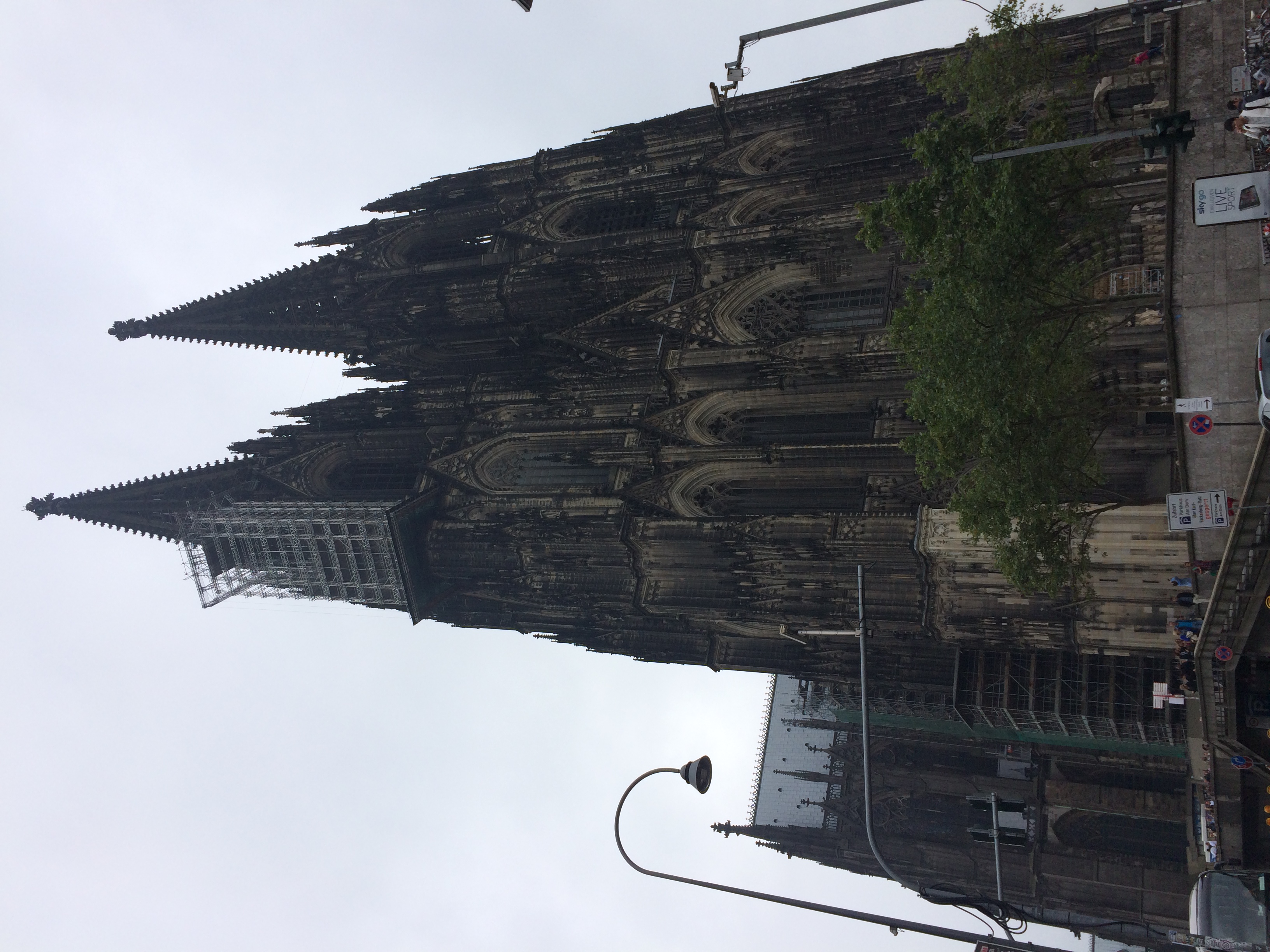