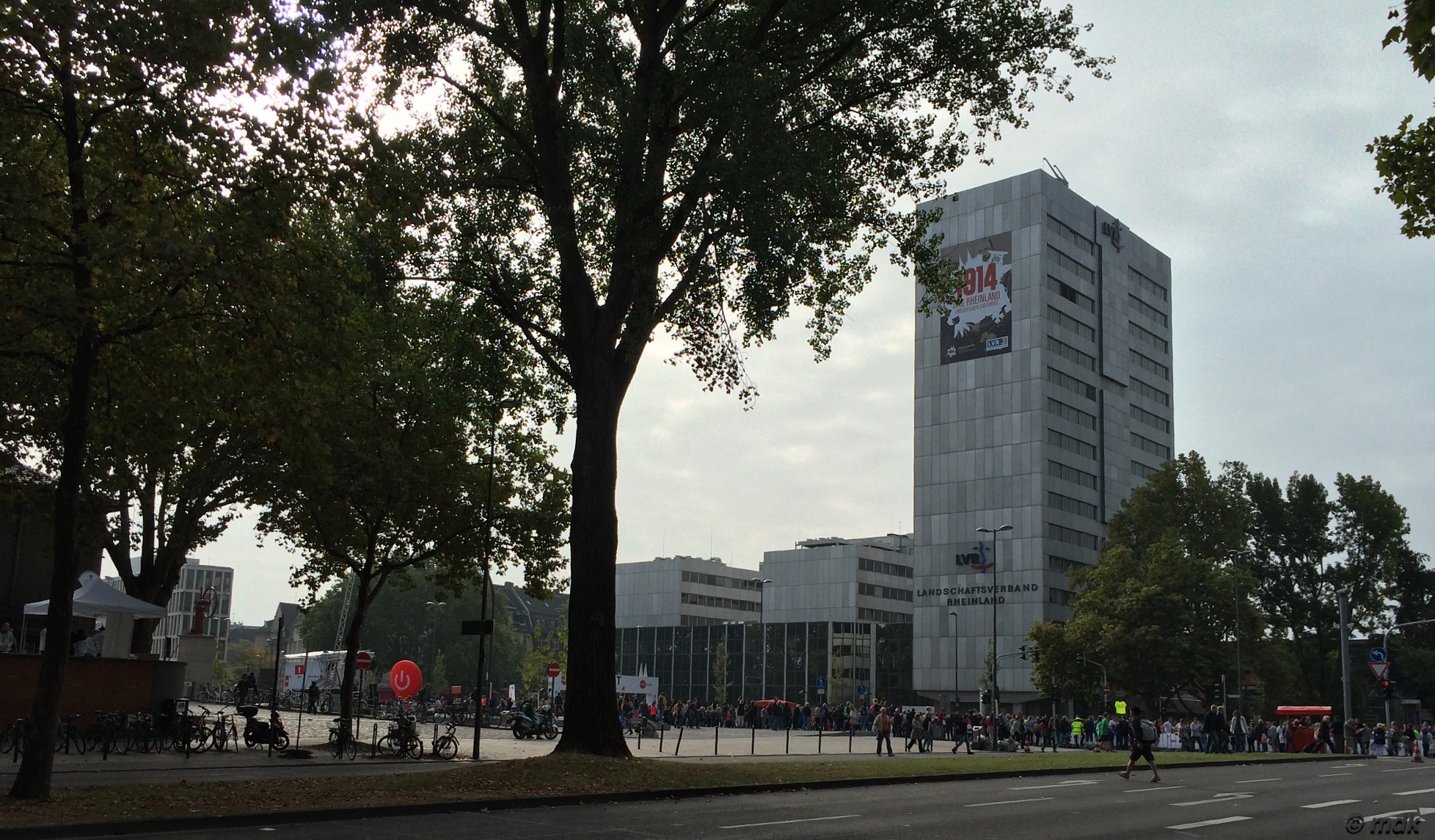 September 2014 and Commando had been lost somewhere amongst the crowd of runners at the start of the Cologne Marathon. Now I had around four hours to explore the city. Cologne is filled with tourist attractions, the cathedral, churches, museums, interesting buildings and river tours, almost too much choice for such a short stay. When I go sightseeing though I like to find more unusual places to explore and, given the lack of information available on the city walls, I thought this might be an interesting walk while Commando ran his marathon. The sun had come out and it was beginning to get warm, bad news for the runners. Just walking across the bridge had made me hot and thirsty. I was pretty sure I’d seen a Starbucks near the cathedral so I set off across the bridge to find it.

As it was still early and there weren’t too many people around I took the opportunity to get a picture of the outside of the cathedral with the morning sun lighting it up. Even on the shadowy side it made an imposing silhouette against the cloudy sky. Unfortunately, the photo was the only thing I got. There may not have been crowds outside the cathedral but there were in Starbucks so I walked away without a coffee. Surely there’d be another coffee shop on my walk? 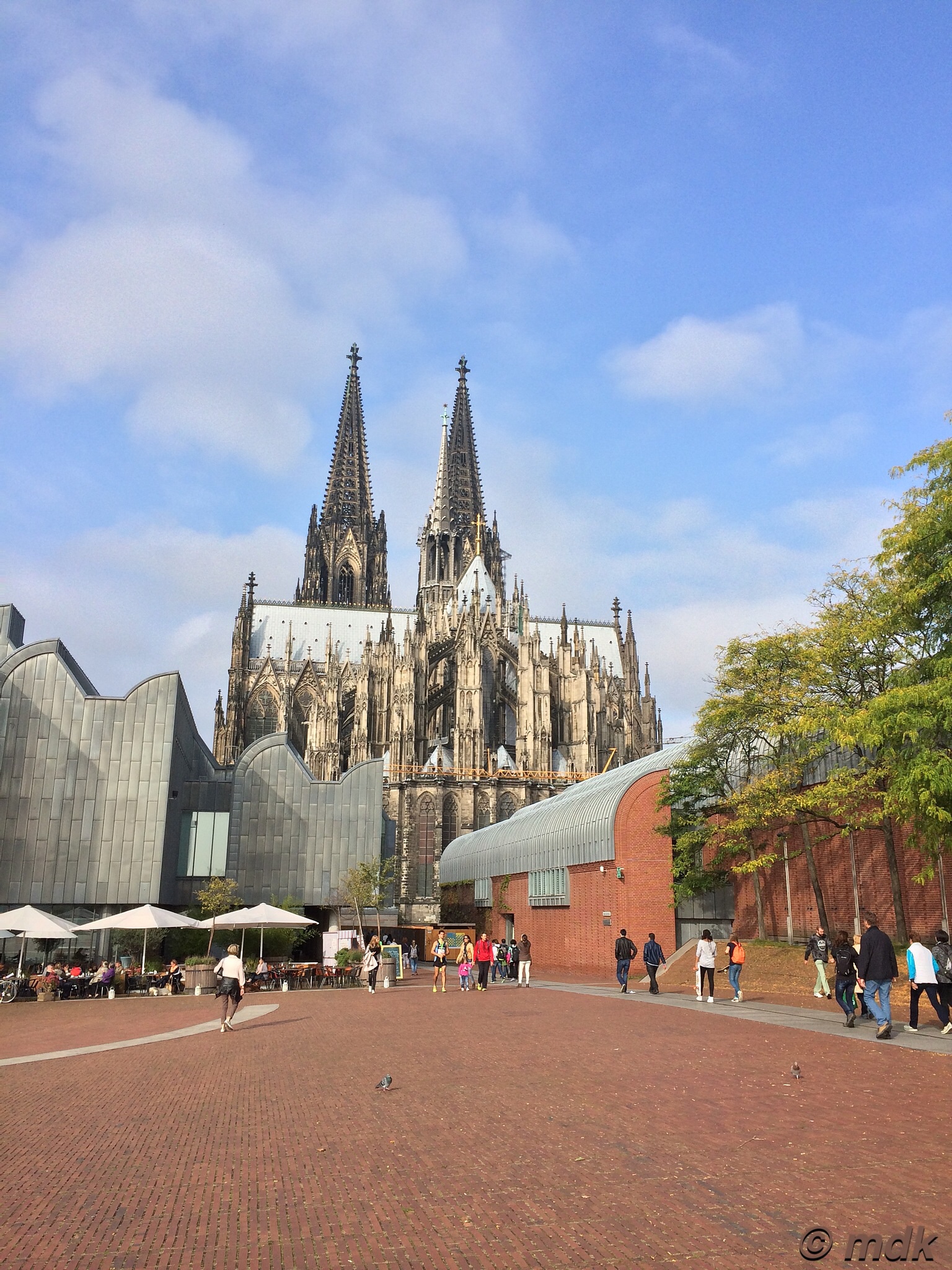 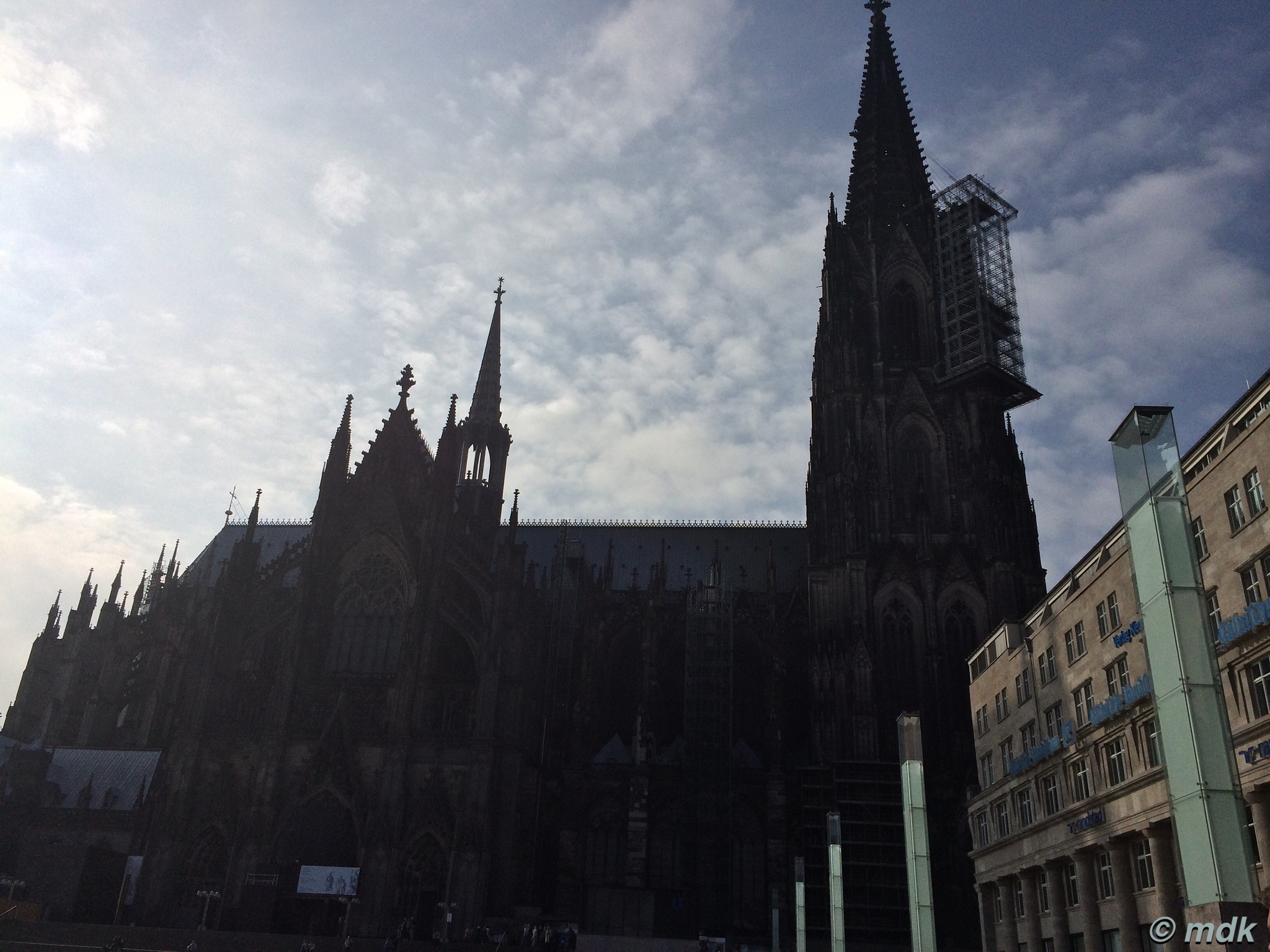 The first part of my walk of the walls started not far from the Theodor-Heuss-Ring just off of Konrad Adenauer Ufer, the road running along the Rhine. The street was called Thürmchen Wall and, right on the corner, there was a small tower. We’d seen it on our previous walks and it had piqued my interest. It had obviously been converted into a house and looked as if it was occupied. This tower is the Wegschnapp and, knowing the history, I’m not sure I’d want to live there. 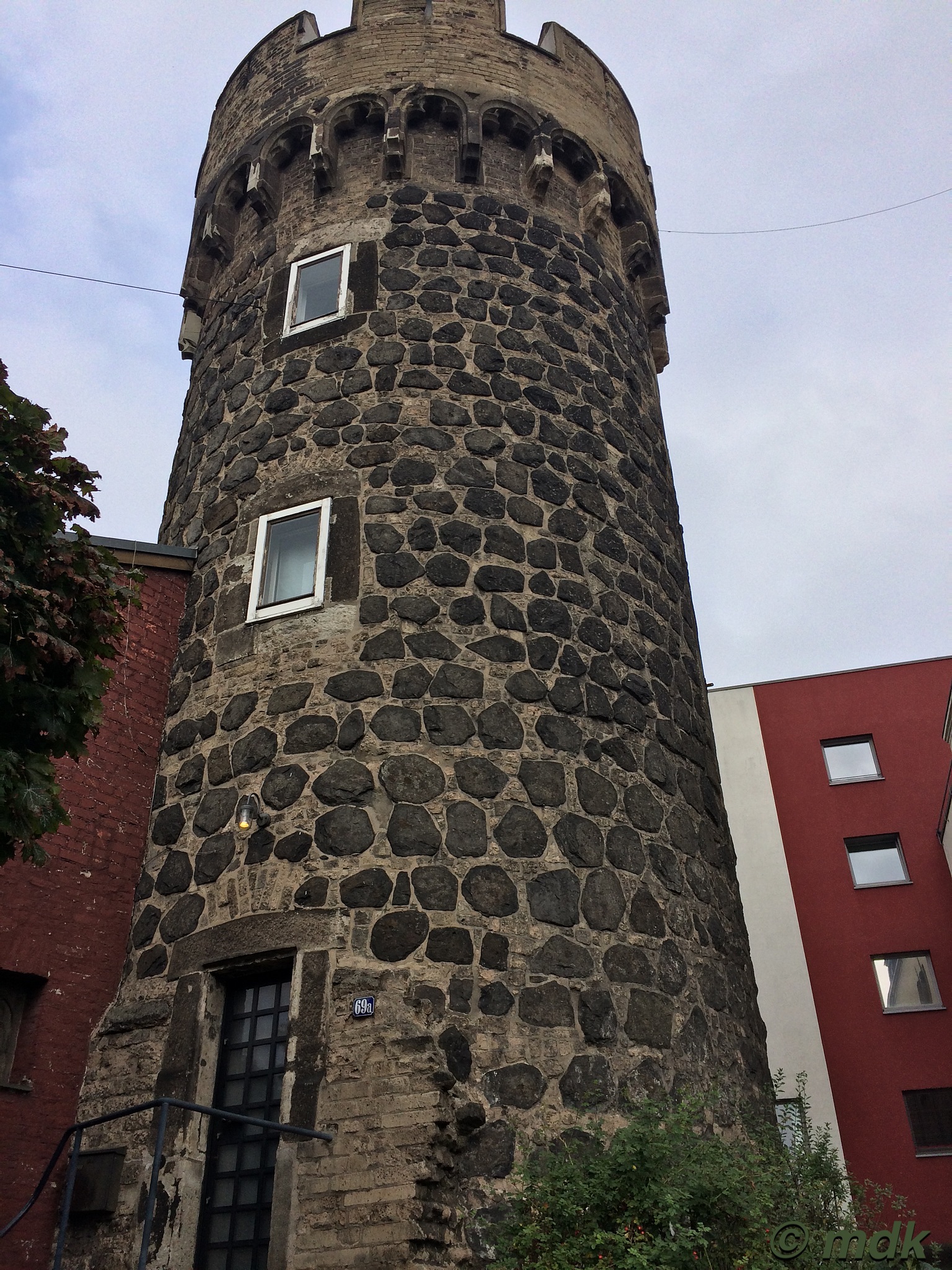 It was built in the fourteenth century as part of the Kunibertsturm city gate and was used as a prison tower. Legend has it that Prisoners were locked inside and left to starve for a week, maybe more. After this time fresh white bread was dangled above them. When they reached for the bread a trapdoor opened under their feet and they fell down a shaft with razor sharp blades into the Rhine below. The story goes that just one prisoner managed to escape because he was so thin he fell through the blades without touching them. Part of the gate collapsed in 1784 and everything but the tower was demolished in 1891. In the 1950’s it was converted into a house. I wonder if the current owners know about the trap door? 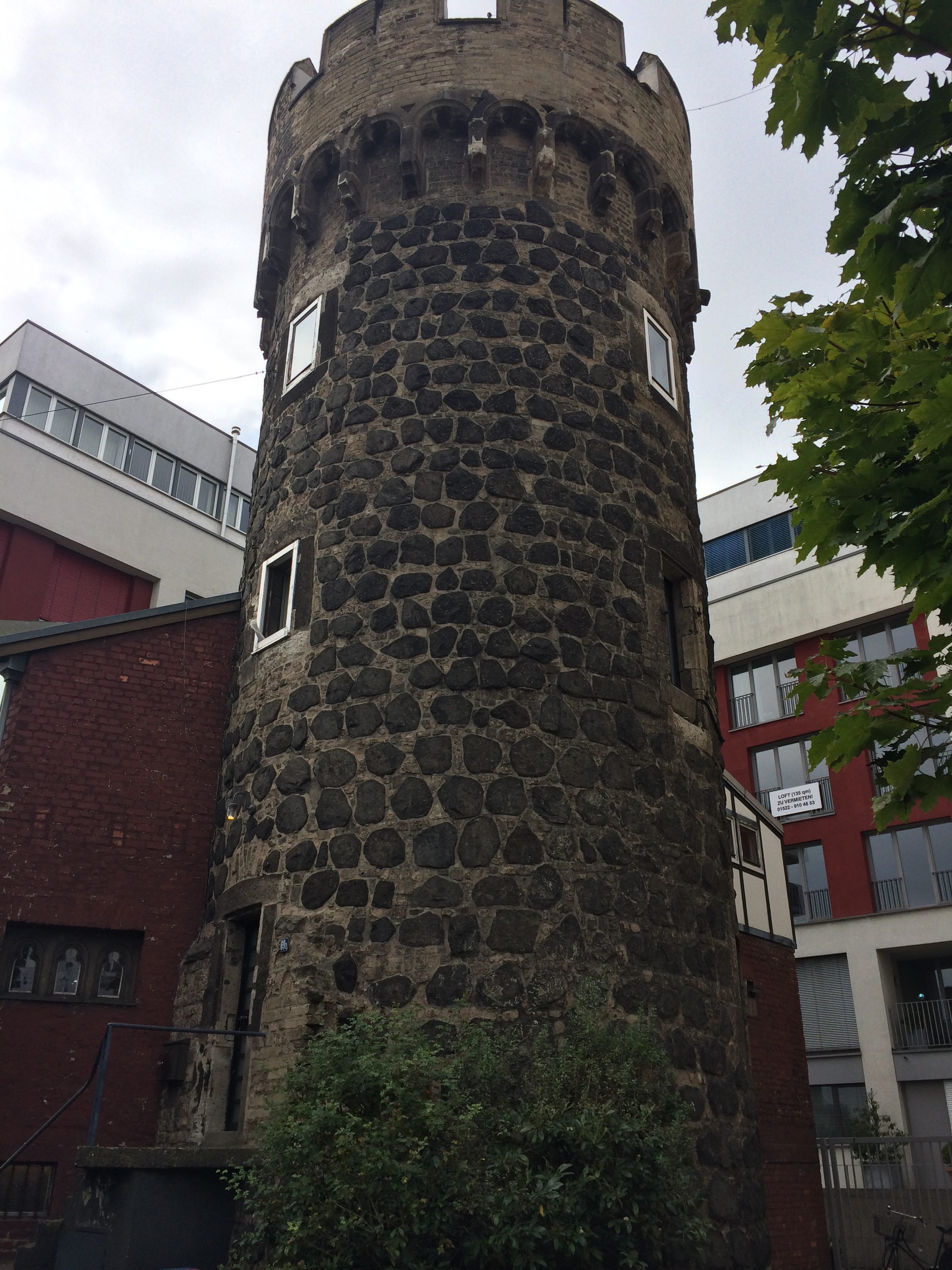 Just past the tower I found the street sign for Thürmchen Wall and turned onto it. With very little information on line I didn’t know what to expect but I suppose I was hoping for the odd bit of ruined wall amongst the houses much like the medieval walls of Southampton. All I found was a narrow street of haphazard tall buildings. There was one interesting front door but nothing at all medieval anywhere to be seen. 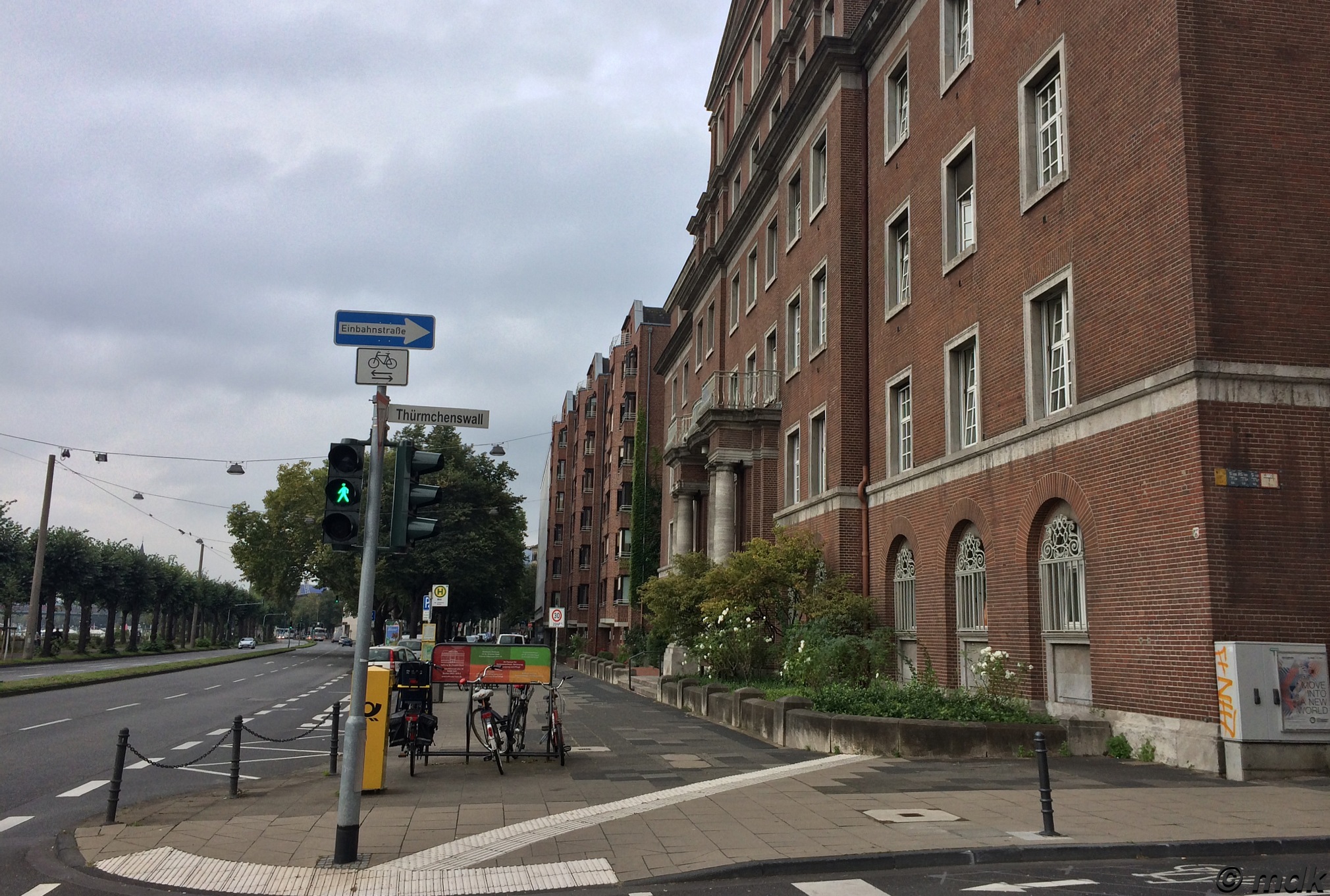 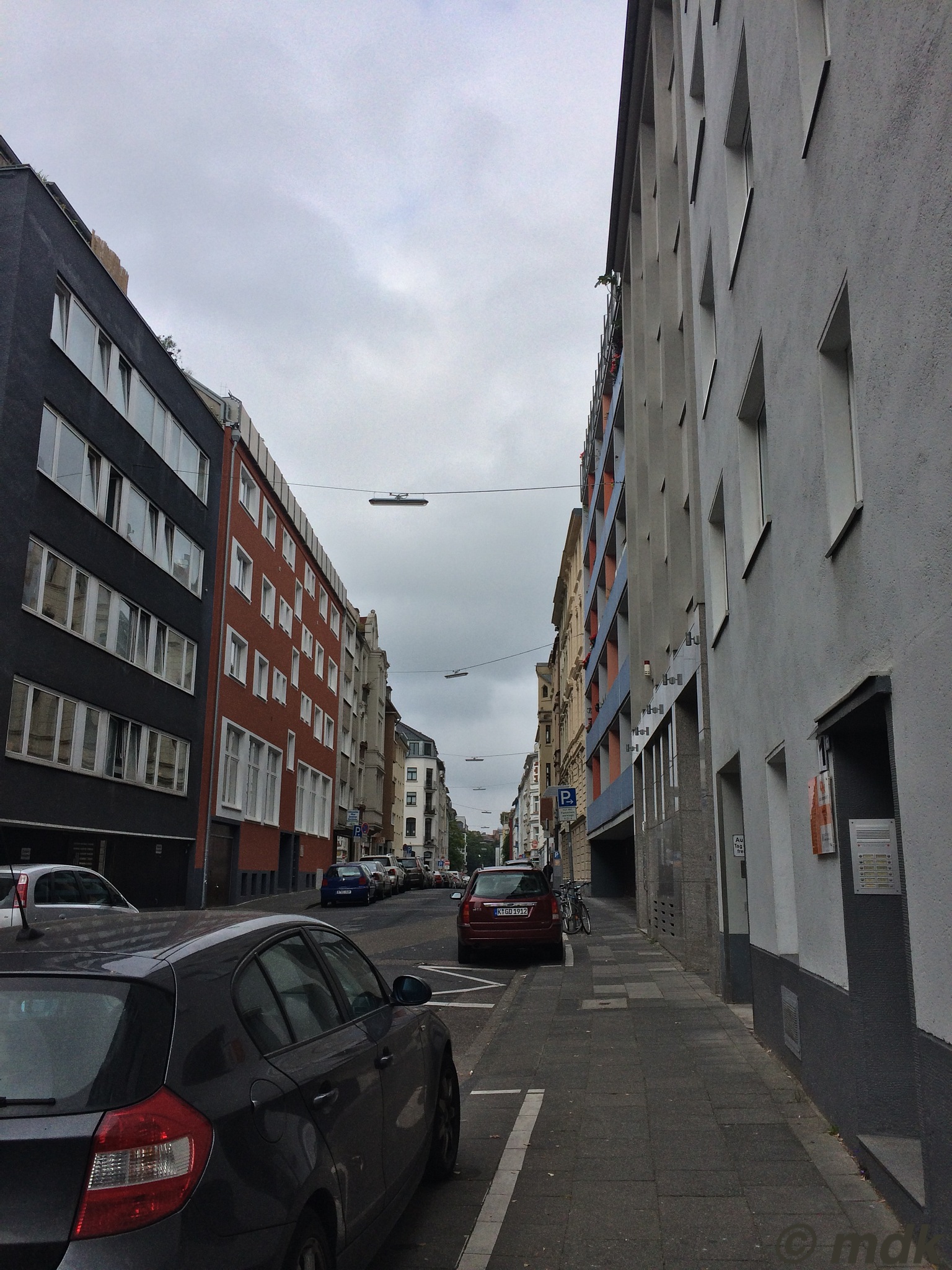 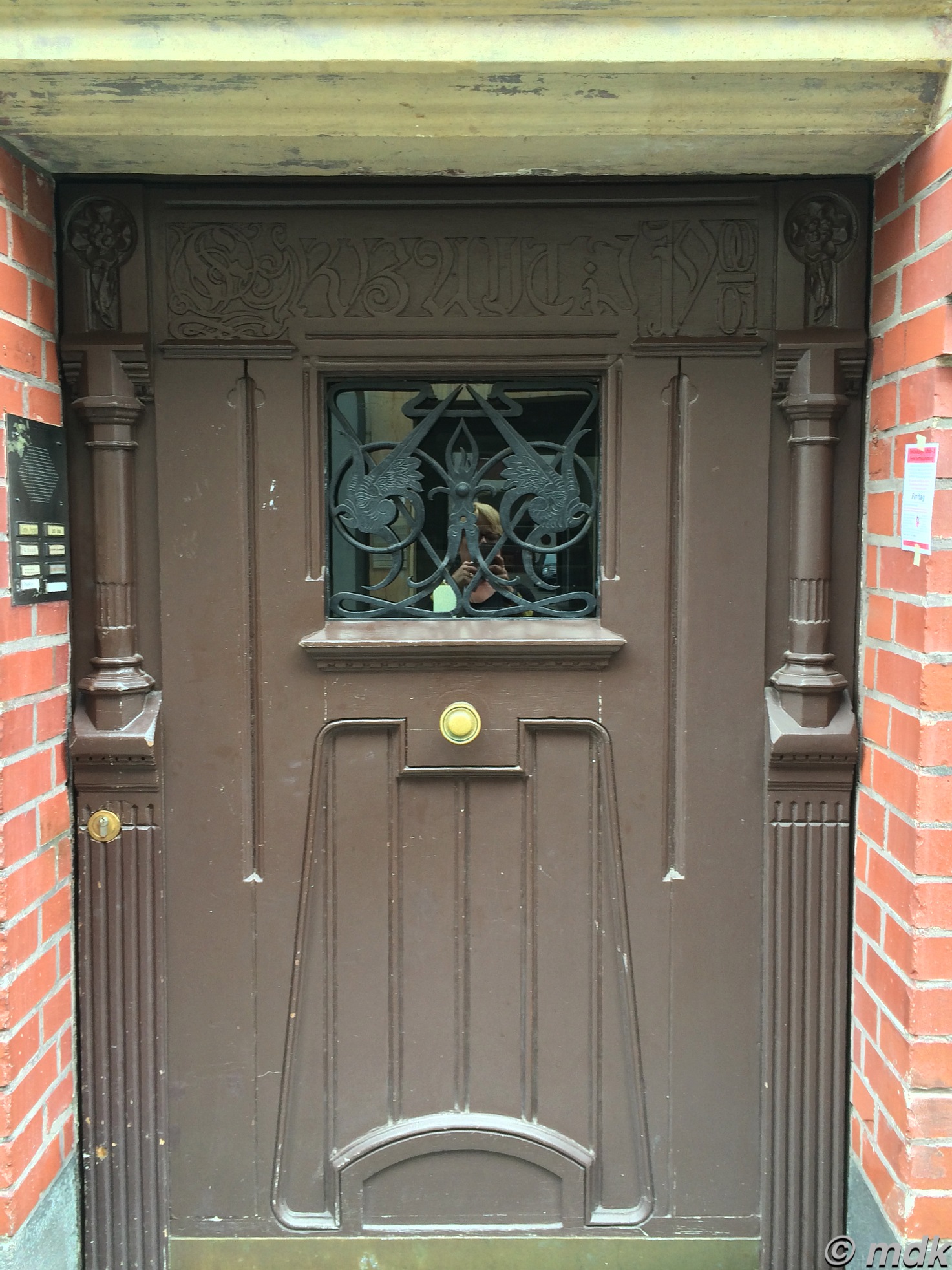 At the end of the street I came to the Eigelsteintor, the medieval gate that had started my quest. For once there were no beggars under the arch but a row of little motorbikes were lined up at the base of the left hand tower. The more I looked the more I realised a great deal of this tower is not exactly medieval, the old stones are there but it’s really a patchwork of these and modern bricks building a facsimile of the original. 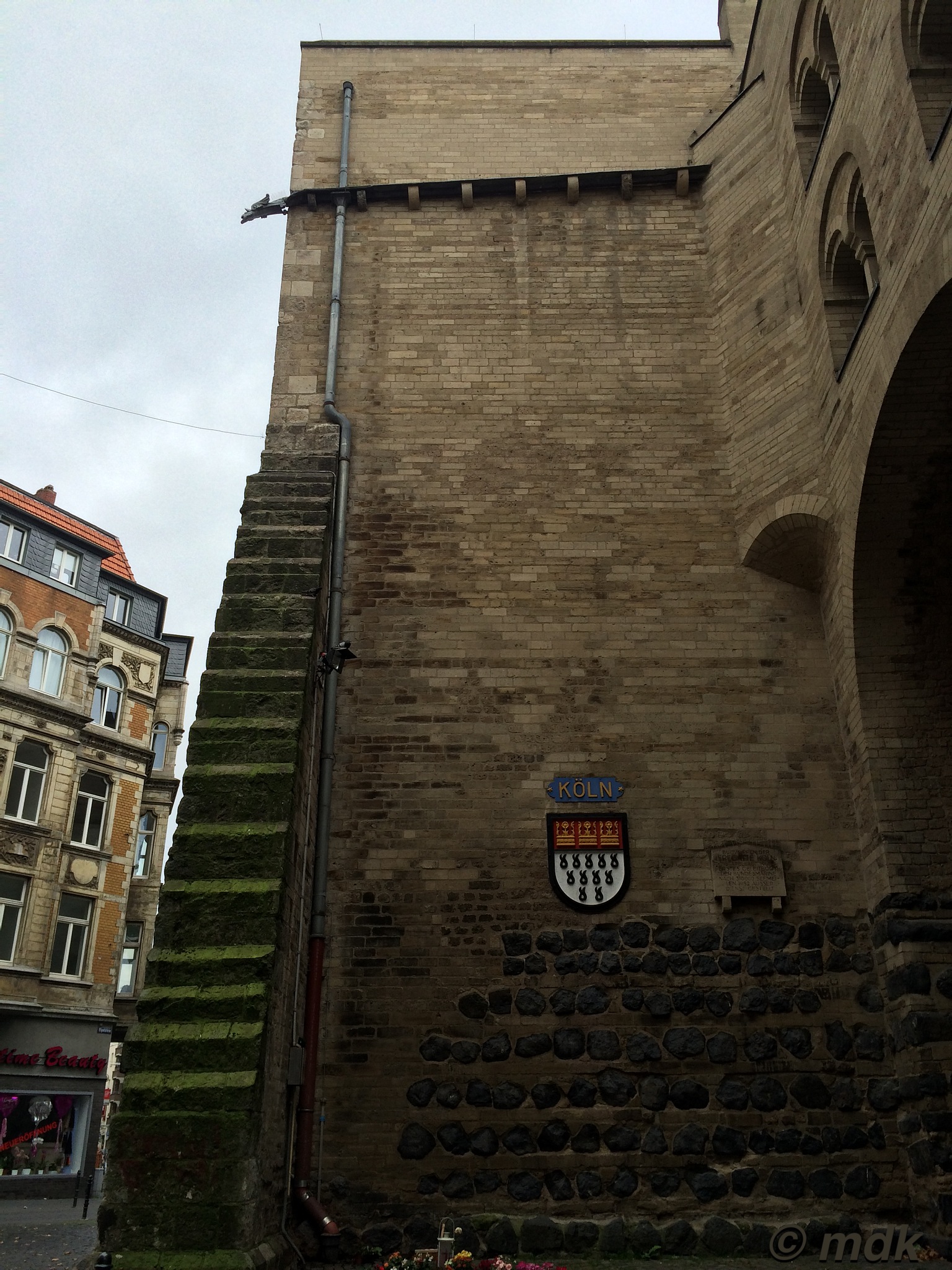 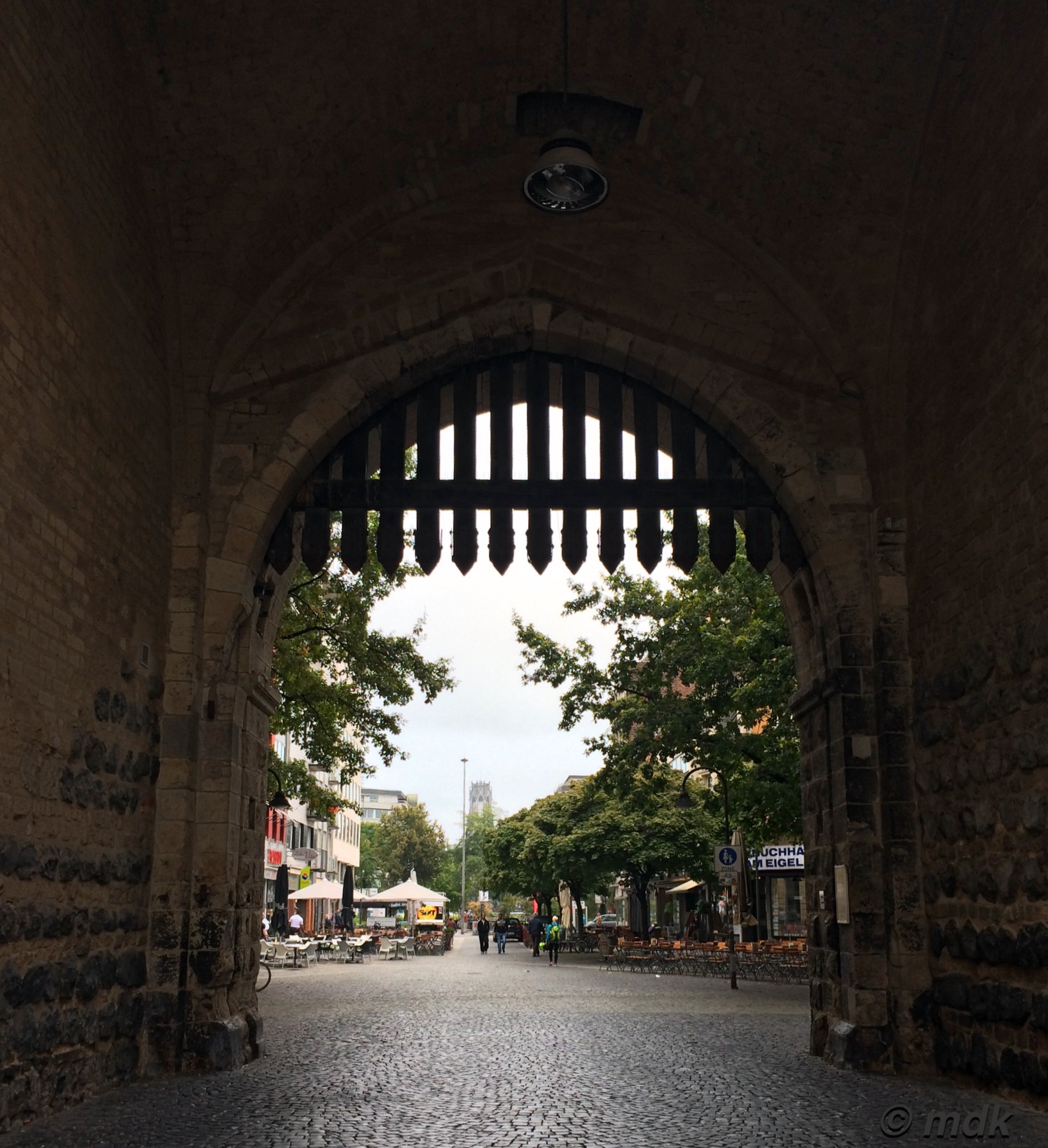 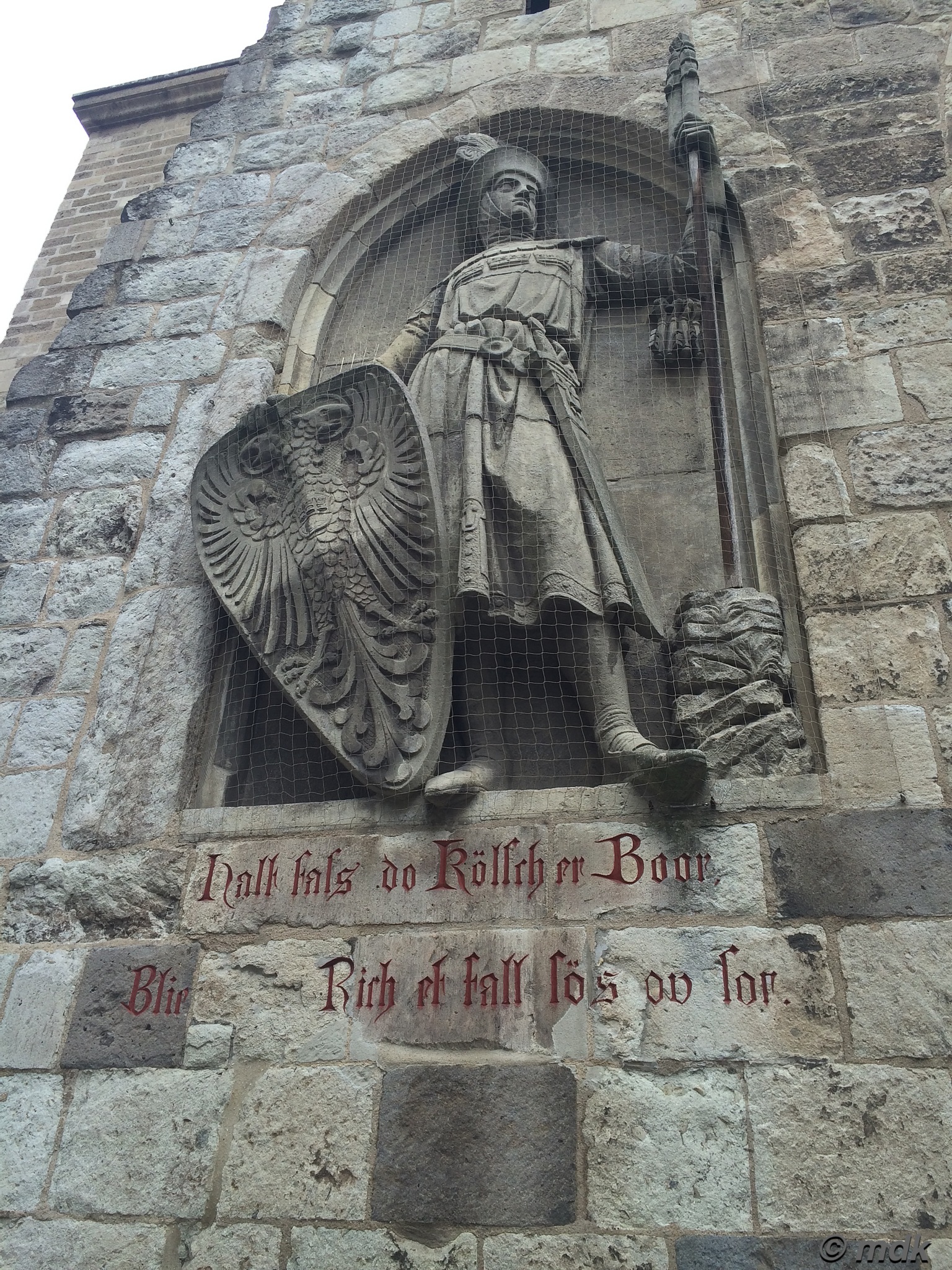 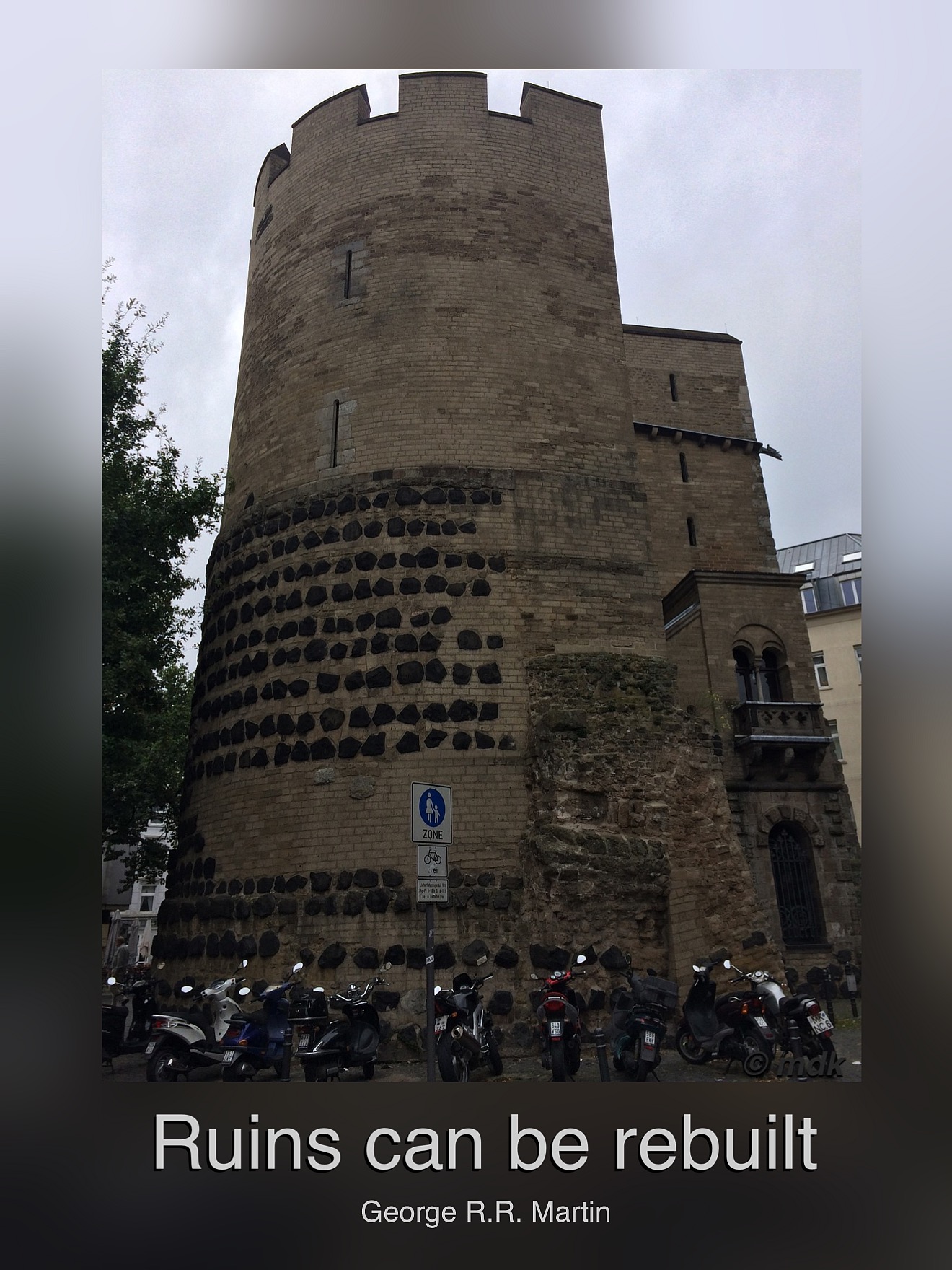 Now I had to find the next stretch of wall. The map told me this was Gereons Wall and fairly quickly I saw the street sign. Again I could find little information about Gereons Wall but I did find a little about St Gereon and there is a church in Cologne called St Gereon’s Basilica dedicated to him. According to legend he was a soldier of the Theban Legion who, along with about fifty others, was beheaded at Agaunum for refusing to sacrifice to pagan gods. He is one of the patron saints of migraines. 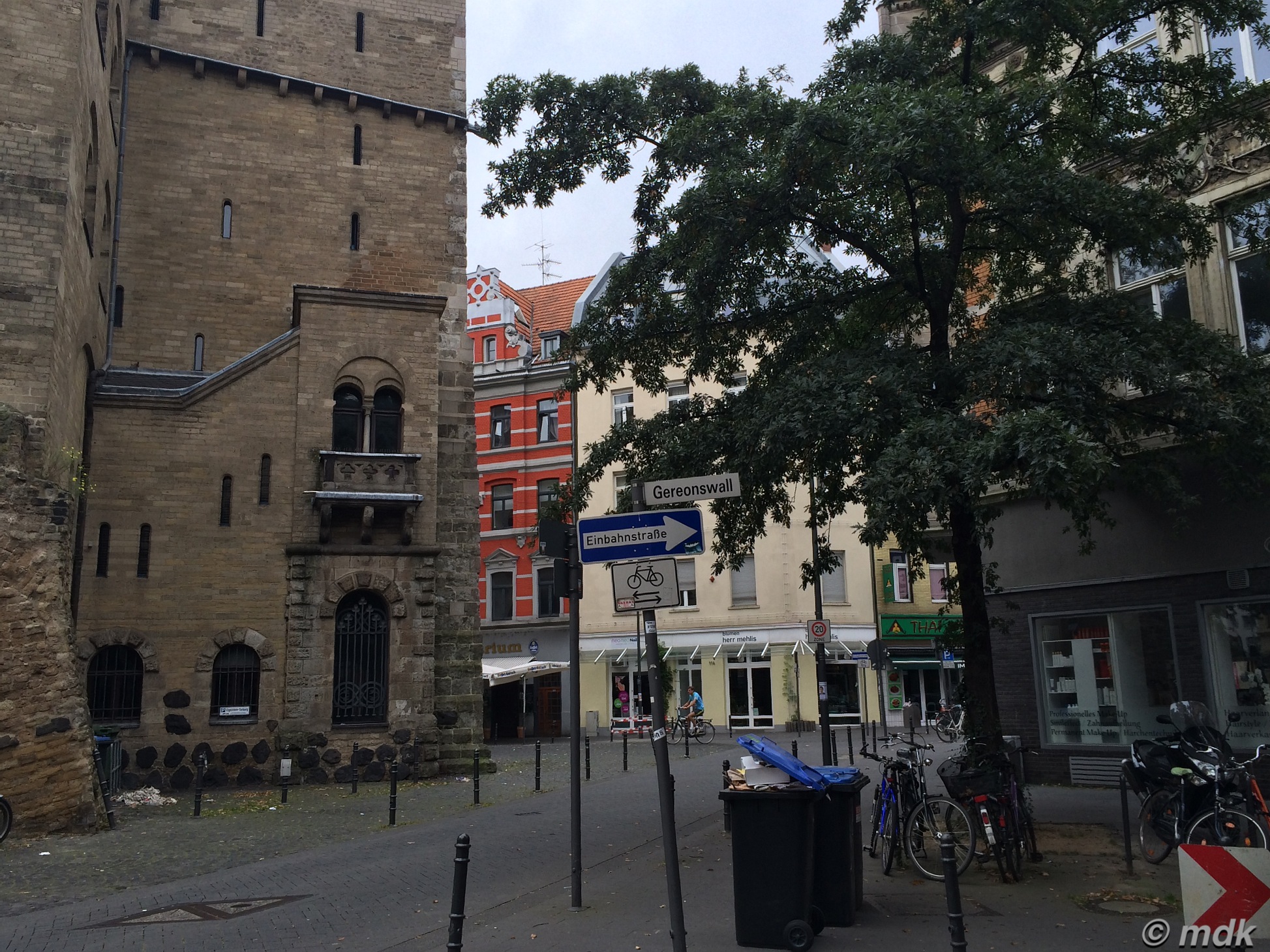 It was a narrow, rather down at heel, residential street, certainly no coffee shops in sight. Things got slightly better after I’d passed under a railway bridge and  spotted a nice little park. This was Klingelpützpark, a two acre landscaped park created on the site of Klingelpütz prison in the late 1960’s and early 1970’s. Shady steps leading up into the trees tempted me to leave Gereons Wall for a while and explore. Little did I know as I climbed the hill that the rubble of the notorious prison building was piled under the earth beneath my feet. The prison, built between 1836 and 1838 was used by the Nazis between 1933 and 1945. Prisoners were crammed in and the conditions were appalling, more than one thousand executions took place. At the bottom of the hill, my shoes wet from the dewy grass, I found a memorial stone on the path topped with a copper plaque. This was designed by Karl Burgeff. 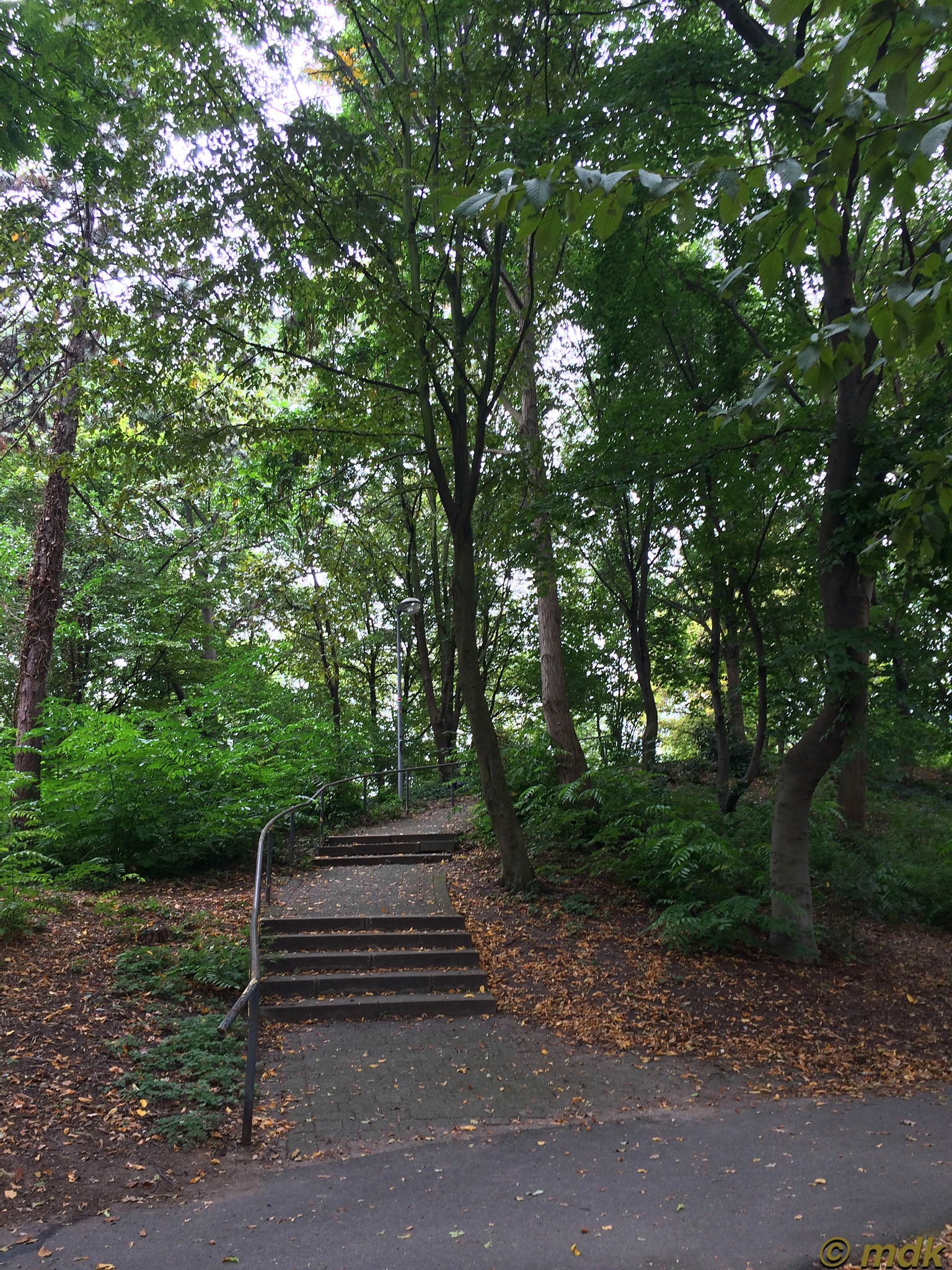 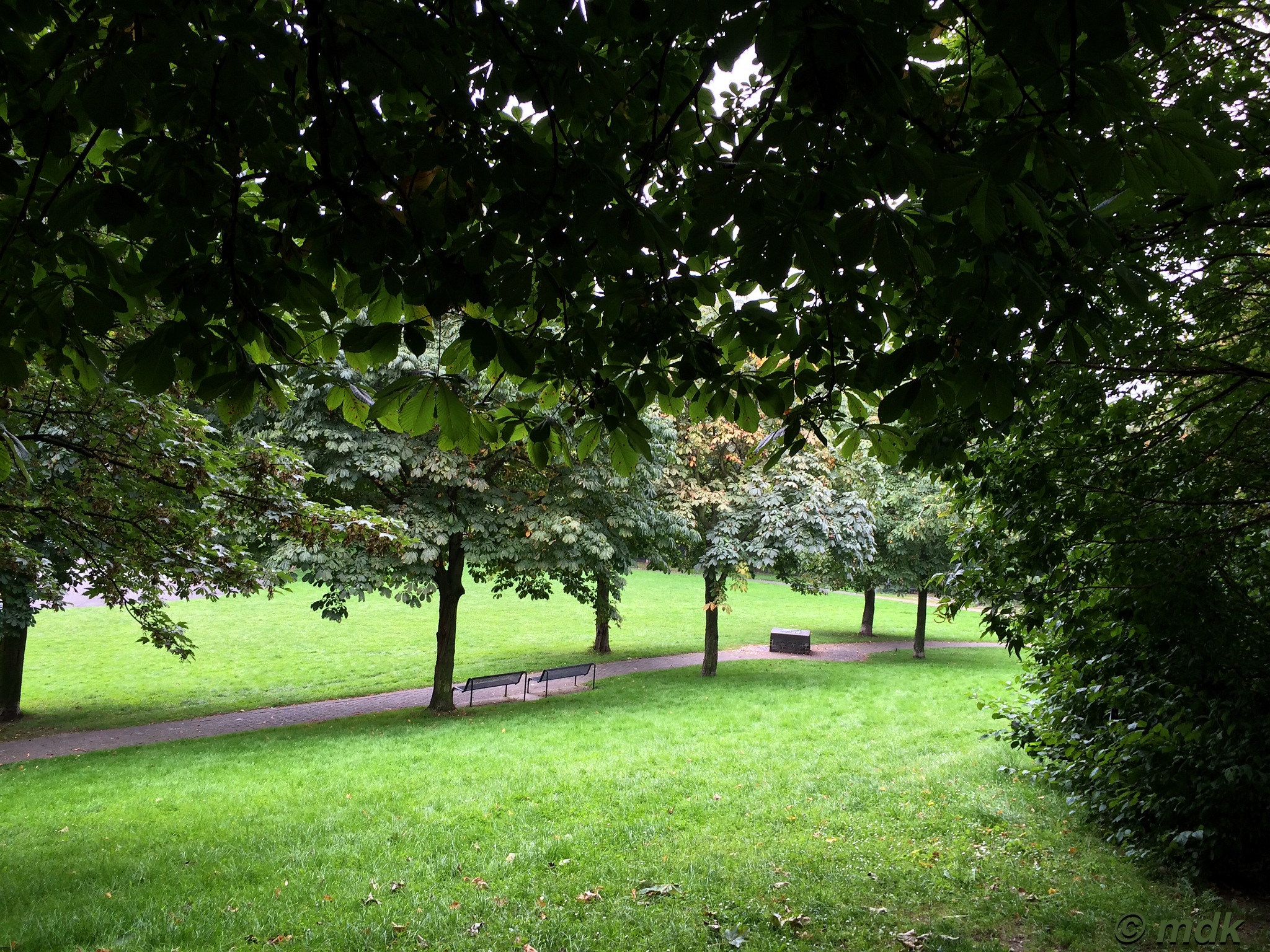 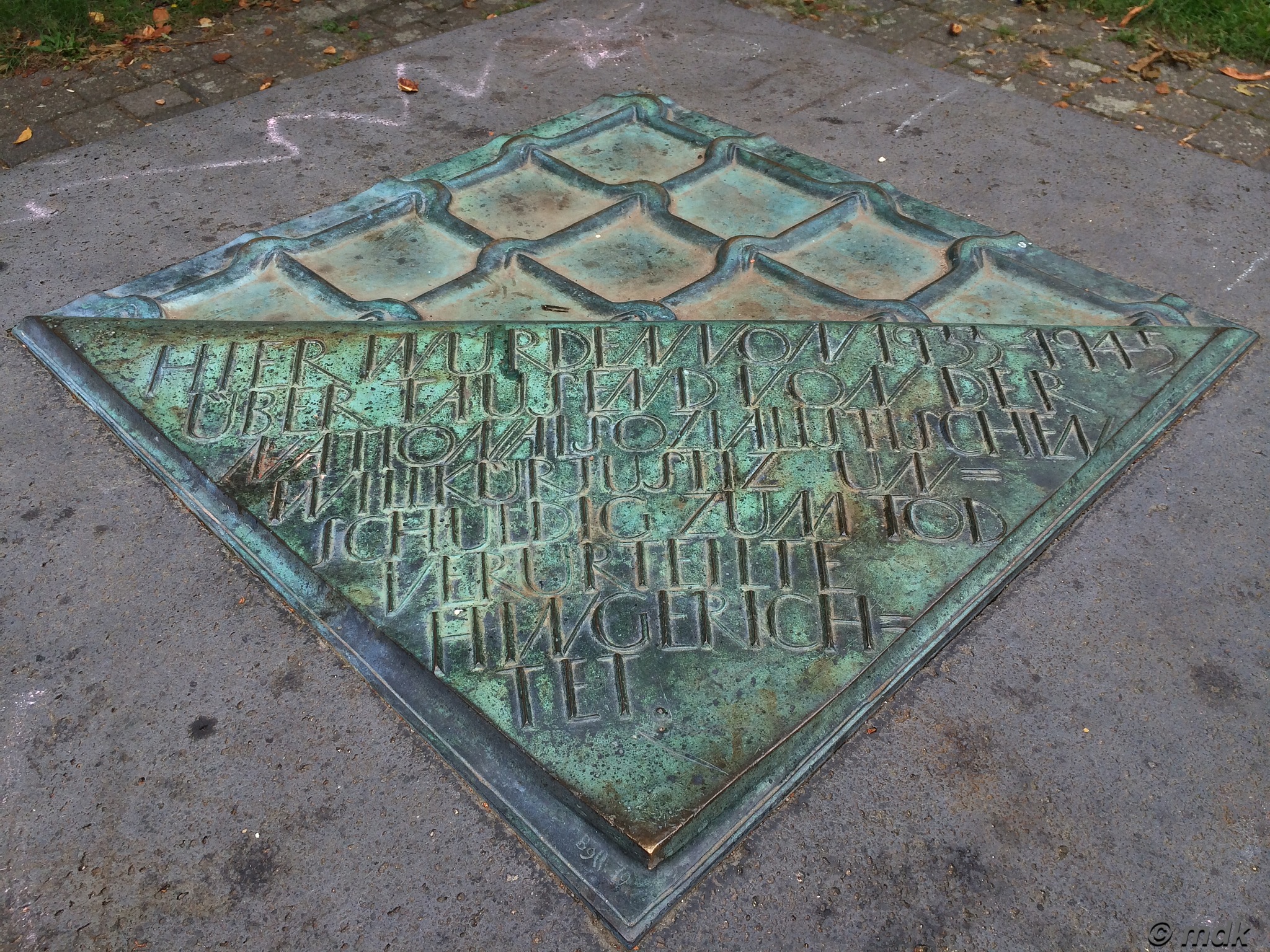 As I emerged back onto the street I was delighted to see my next segment of medieval walls. From the little I have been able to glean this is the Gereonmühlenturm, Gereon Mill Tower, dating from the mid fifteenth century. There is very little information about it which is a shame as such an interesting building, a round tower topped by a small pointed roof with tall arches below, deserves to be celebrated. Beside it a long red brick wall ran below a stretch of the old walls, a colonnade of low arches topped with crenellations that looked suspiciously modern to me. The map simply said Stadtmauer, meaning defensive walls. 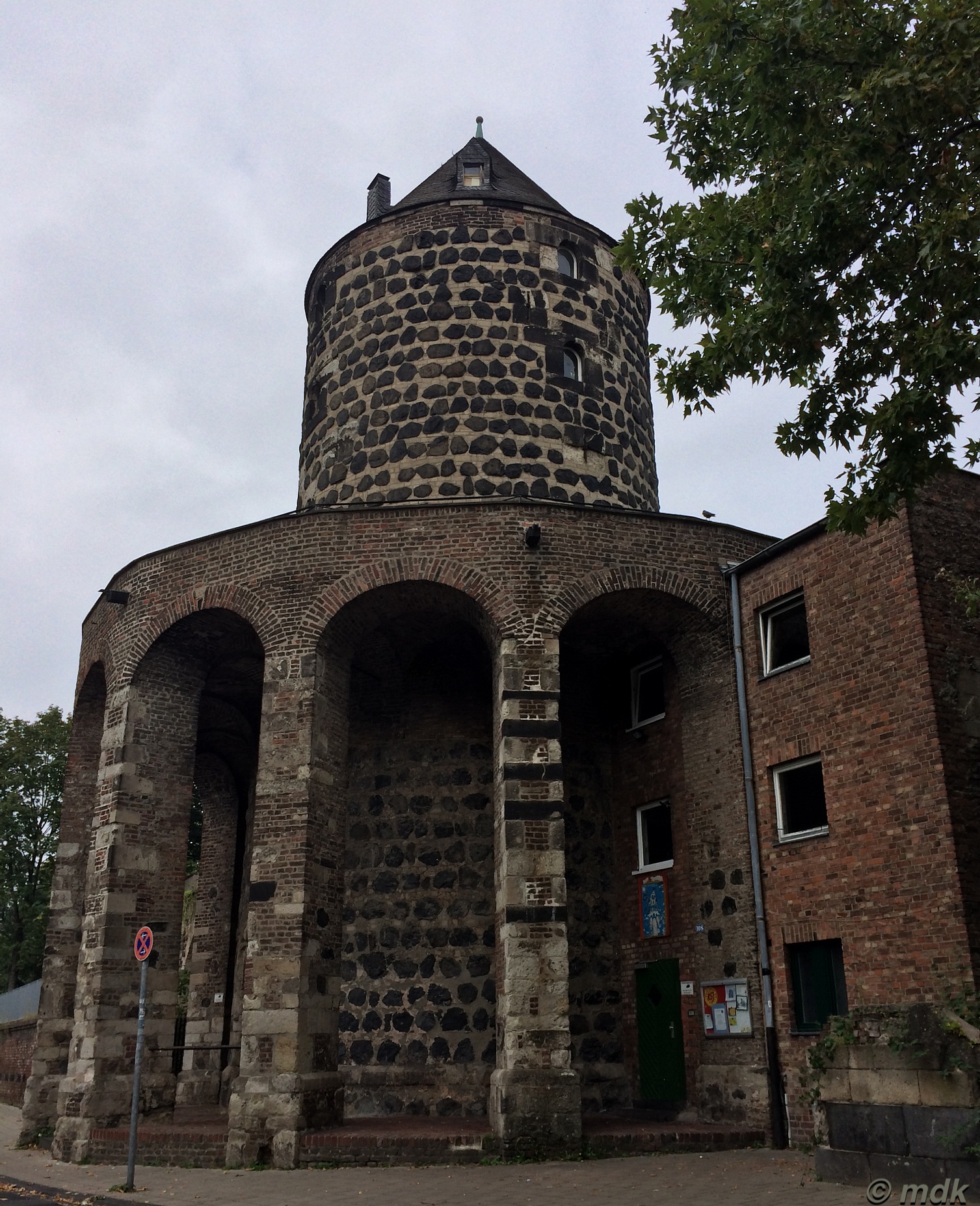 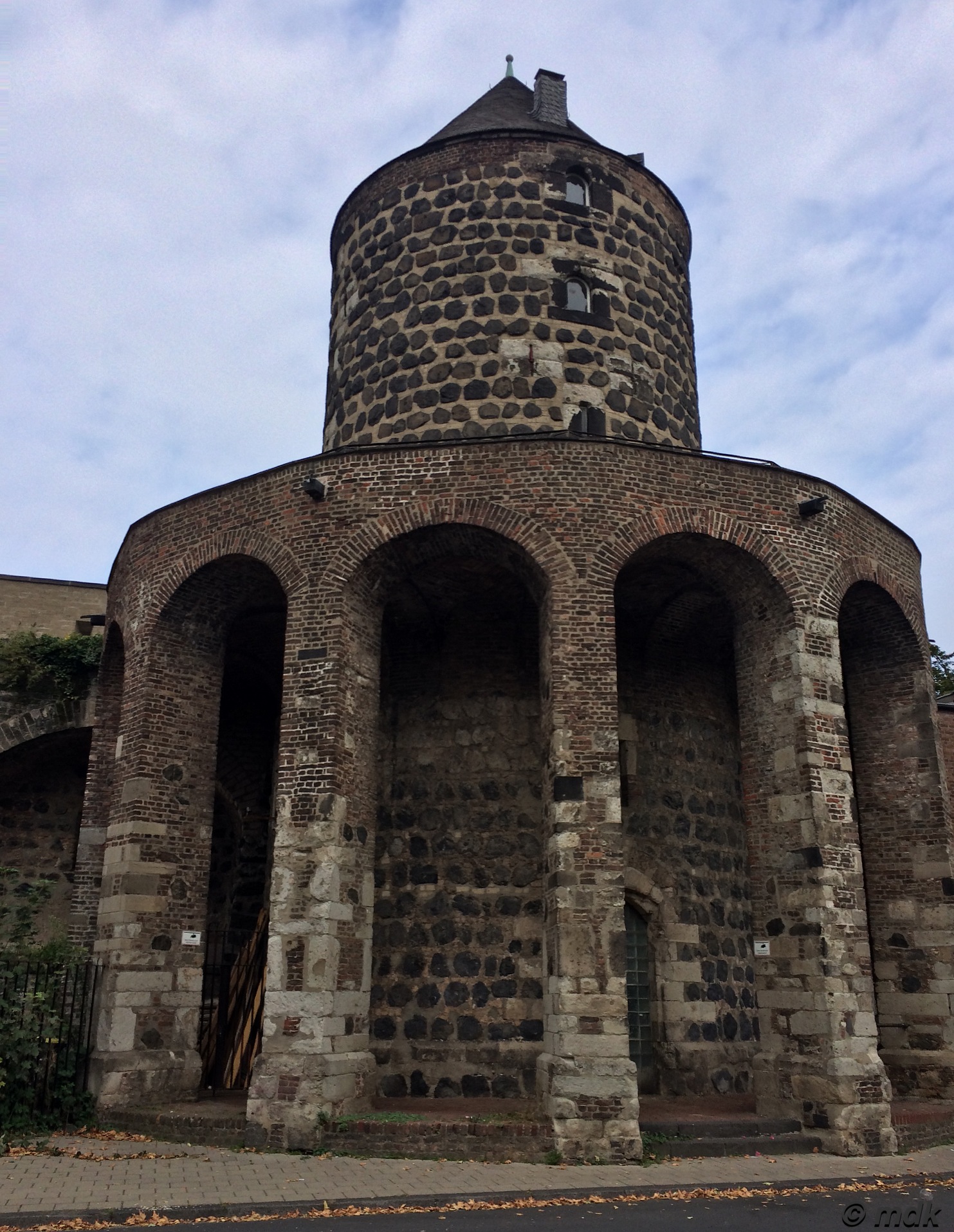 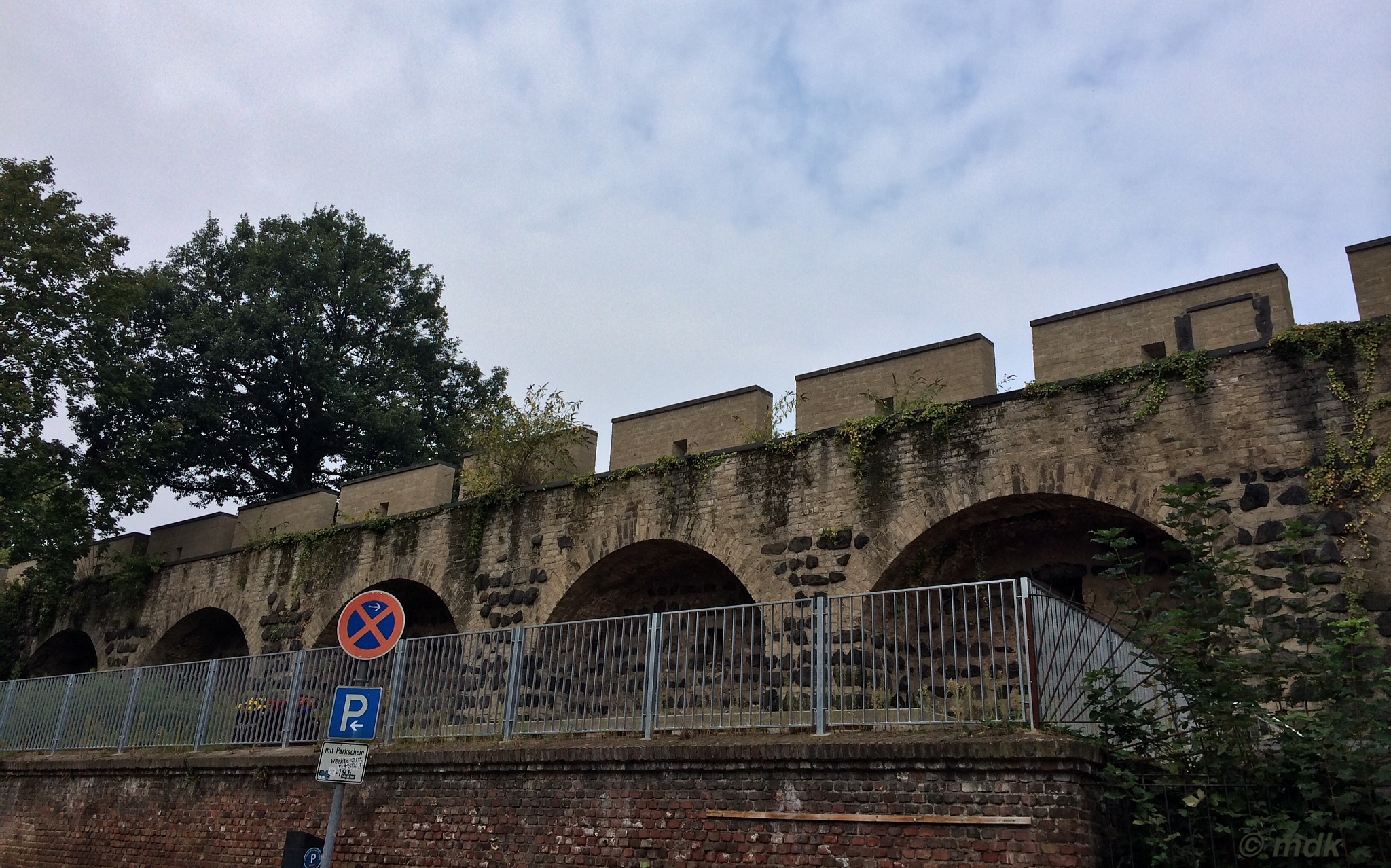 On the opposite side of the road a brightly coloured graffiti wall caught my eye. There is a school close by and I suspect the graffiti is connected to this. I wonder how many tourists ever walk this way? When I came to the end of the red brick wall I decided to walk around to the other side to see what the ruins looked like from there. 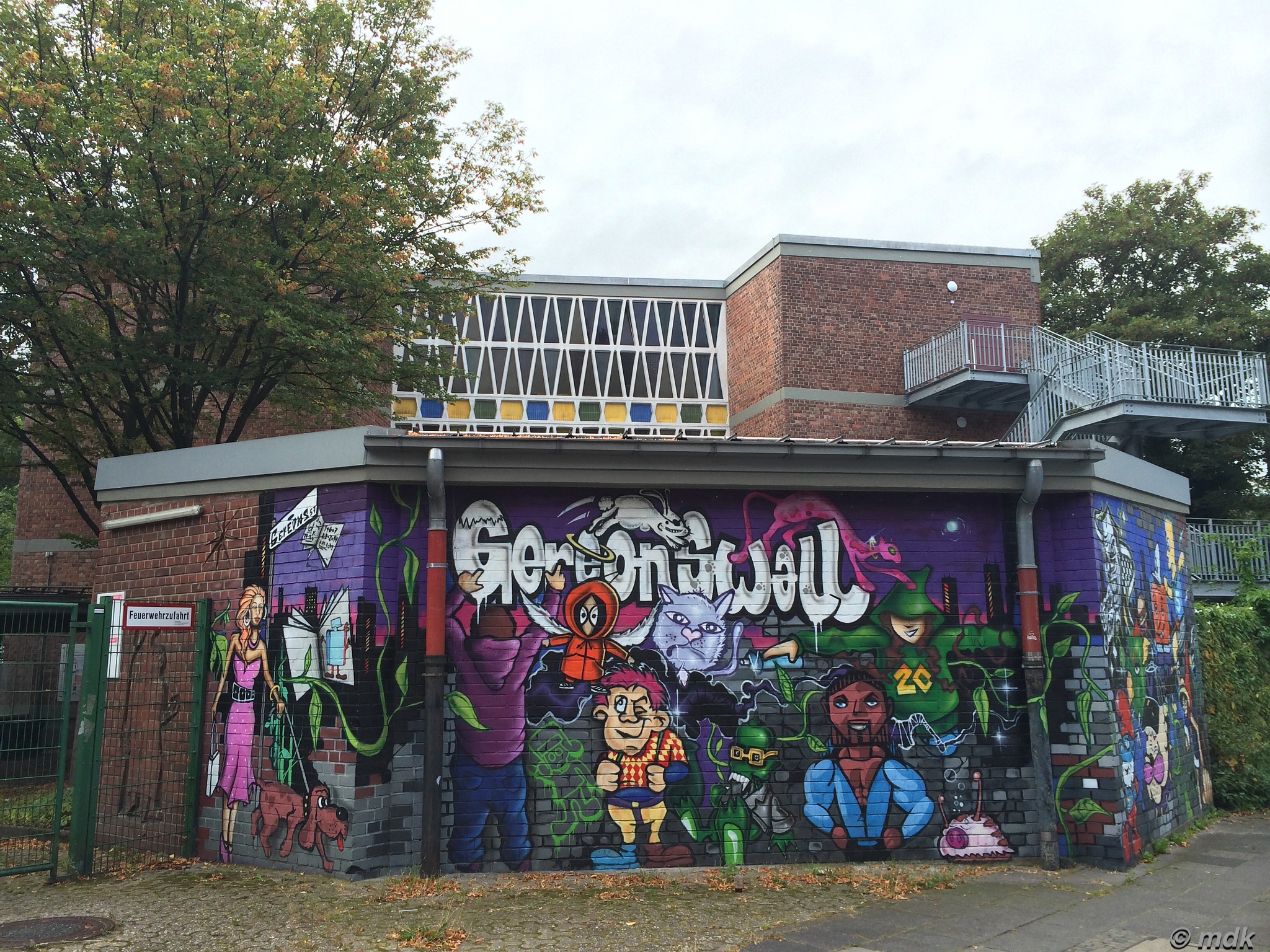 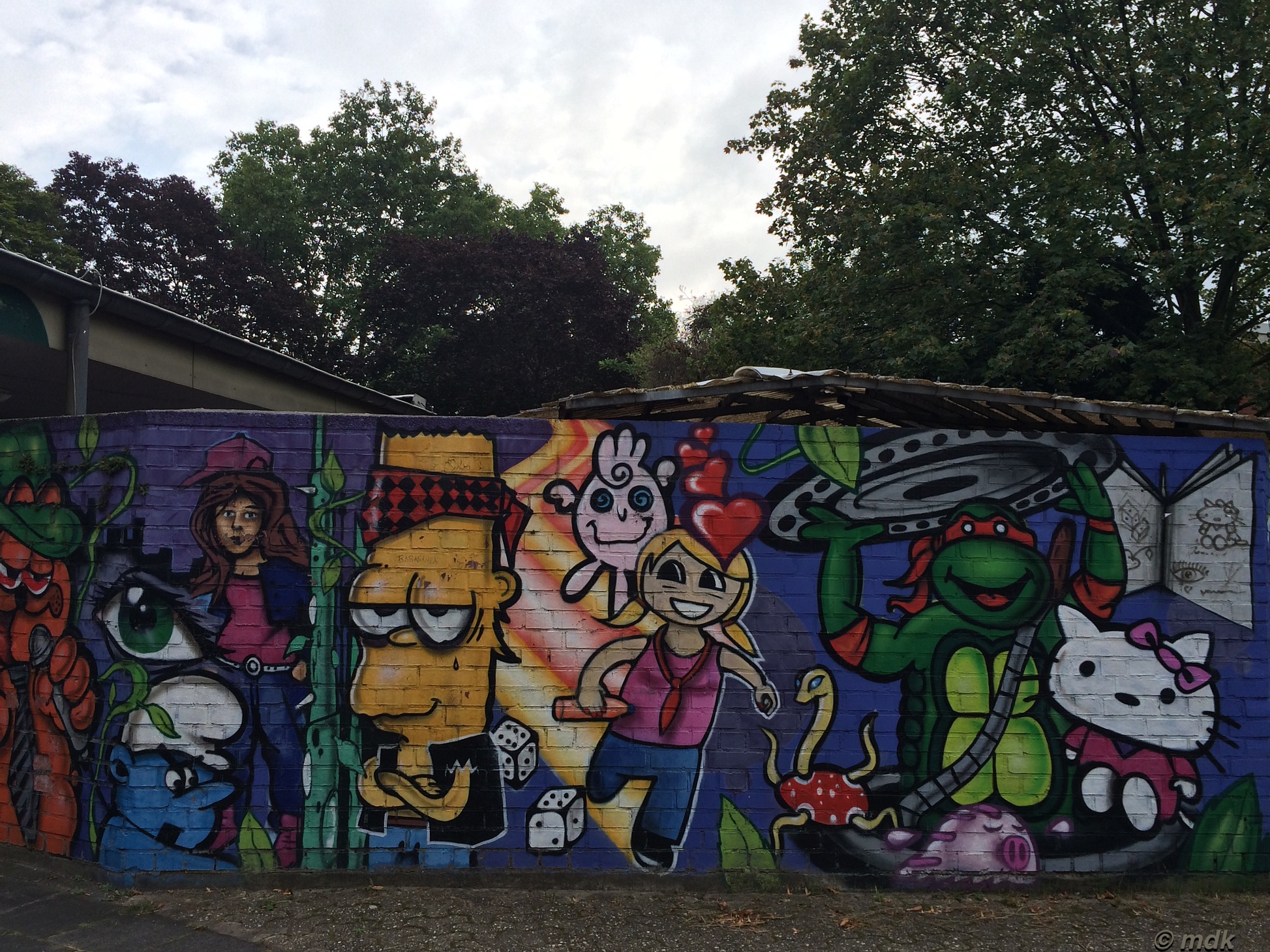 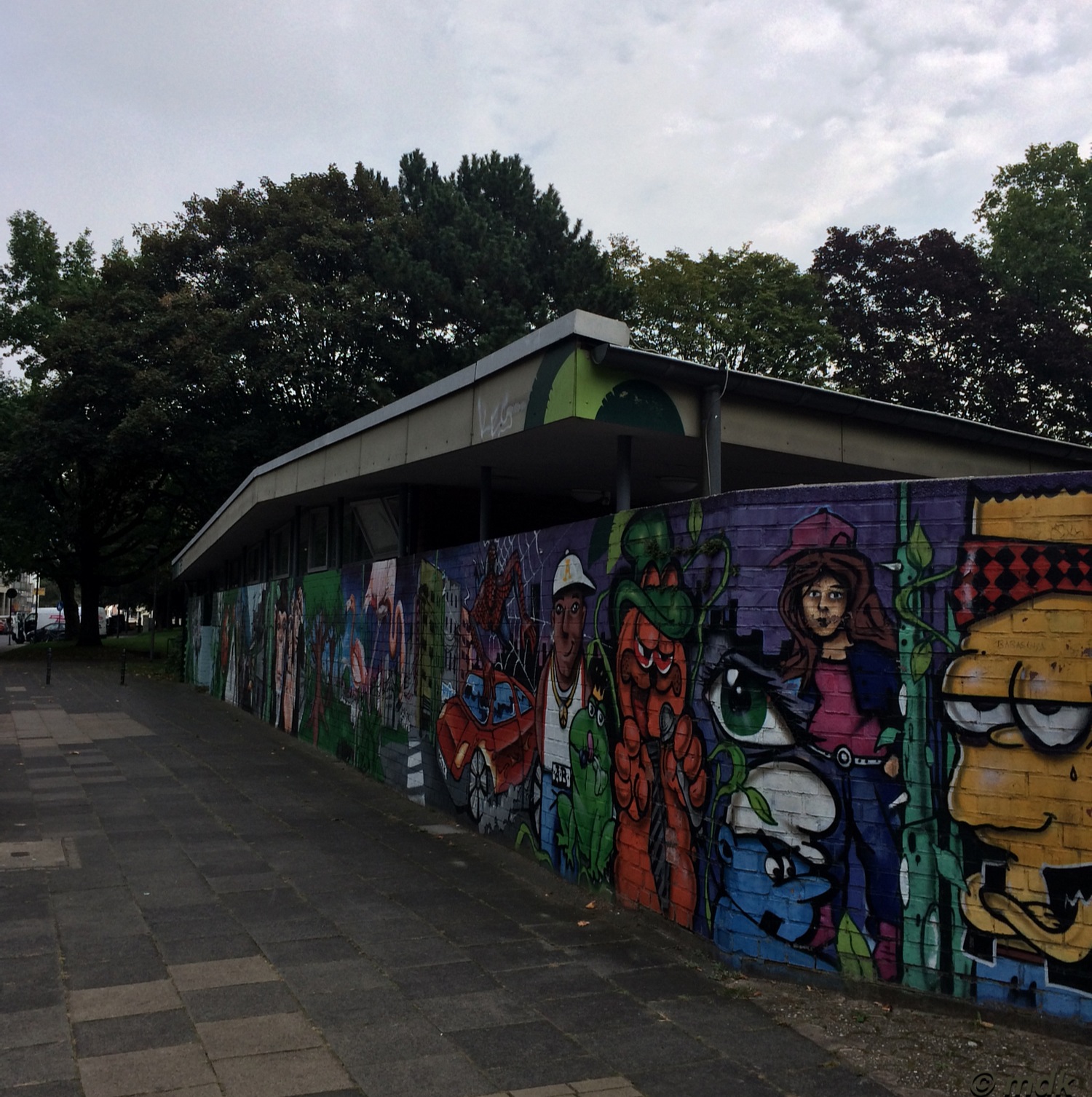 Around the corner red brick joined with ancient stone. There was a long stretch of wall with the mill at one end and a crenelated tower at the other. The wall had obviously been restored and I think I prefer the crumbling, weathered old stone of my home town but it was impressive nonetheless and gave an idea of what the originals must have looked like. 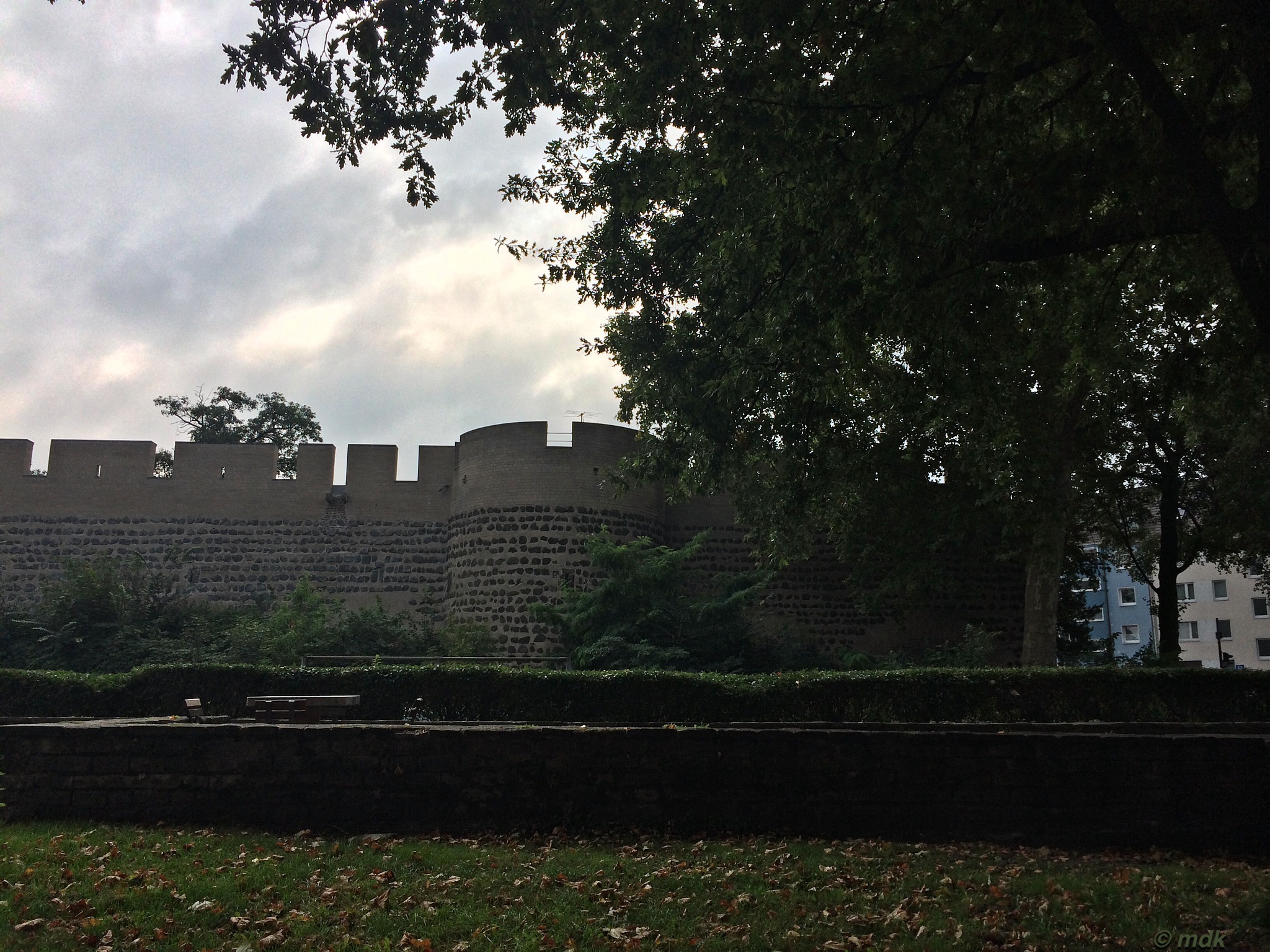 On the grassy area in front of the wall a bronze statue of a woman cradling a dead child was obviously a memorial. This is Hamsa Platz built in 1958 on the site where seven Gestapo victims, a woman and six men, were buried. Their bodies were found in the grounds of the Klingelpütz prison. The worn inscription on the nearby stone reads, ‘Here lie seven victims of the Gestapo. This time remember to Germany schandvollste period 1933-1945.’ Even though I didn’t know the story behind it at the time I found the statue very moving. 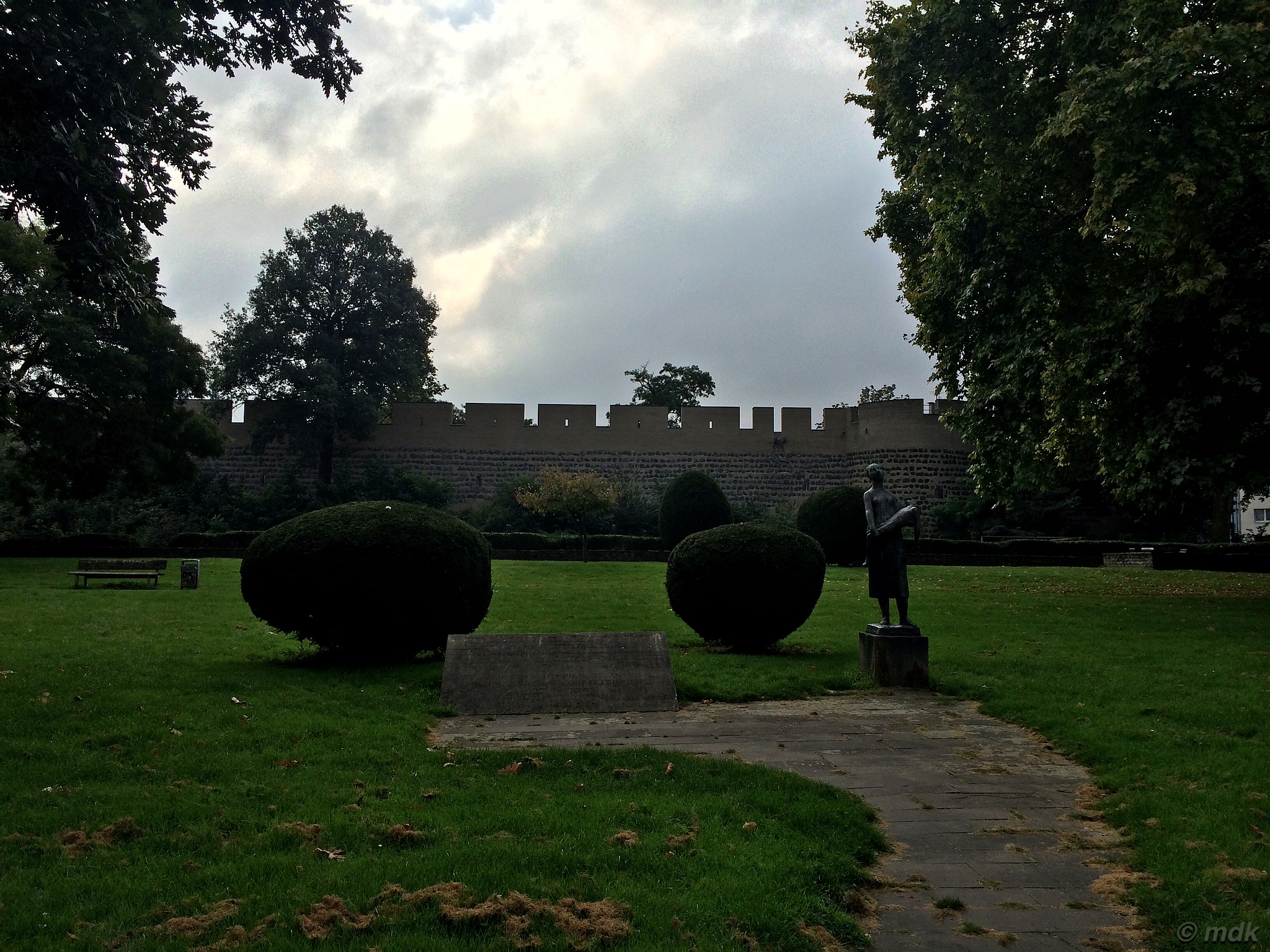 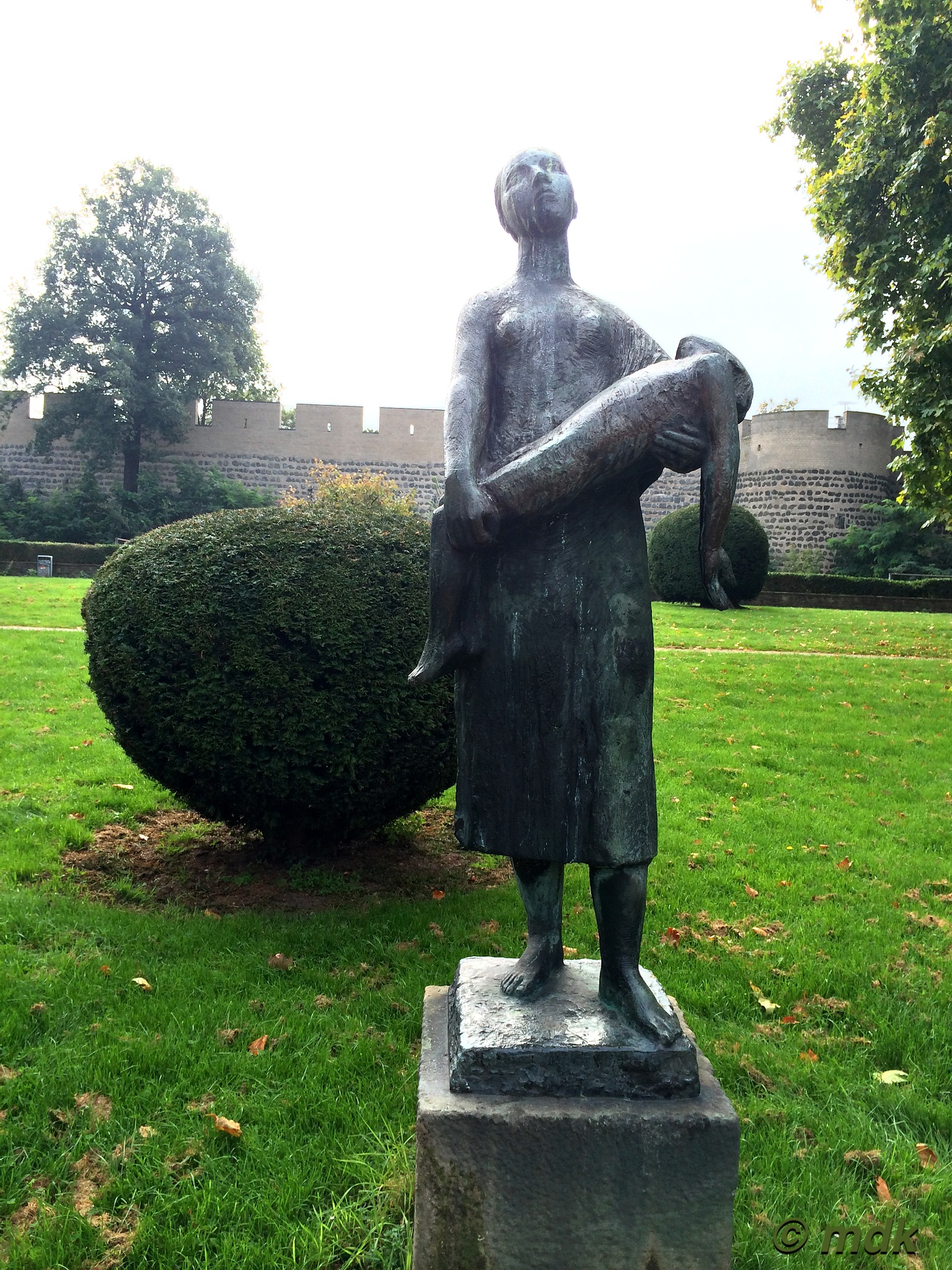 Across the road I could hear music and cheering, the noise of the marathon, and, momentarily, I considered going to have a look but I was pretty sure I wouldn’t see Commando. Returning to Gereons Wall I passed houses and small businesses, all closed on a Sunday morning. This was when things got tricky. From the map I could see there was a break before the next section of wall began. A corner and several badly signposted intersections made finding it confusing. I turned the map this way and that trying to get my bearings. Maybe this was the end of my quest? Perhaps I should go back and follow the marathon route instead?