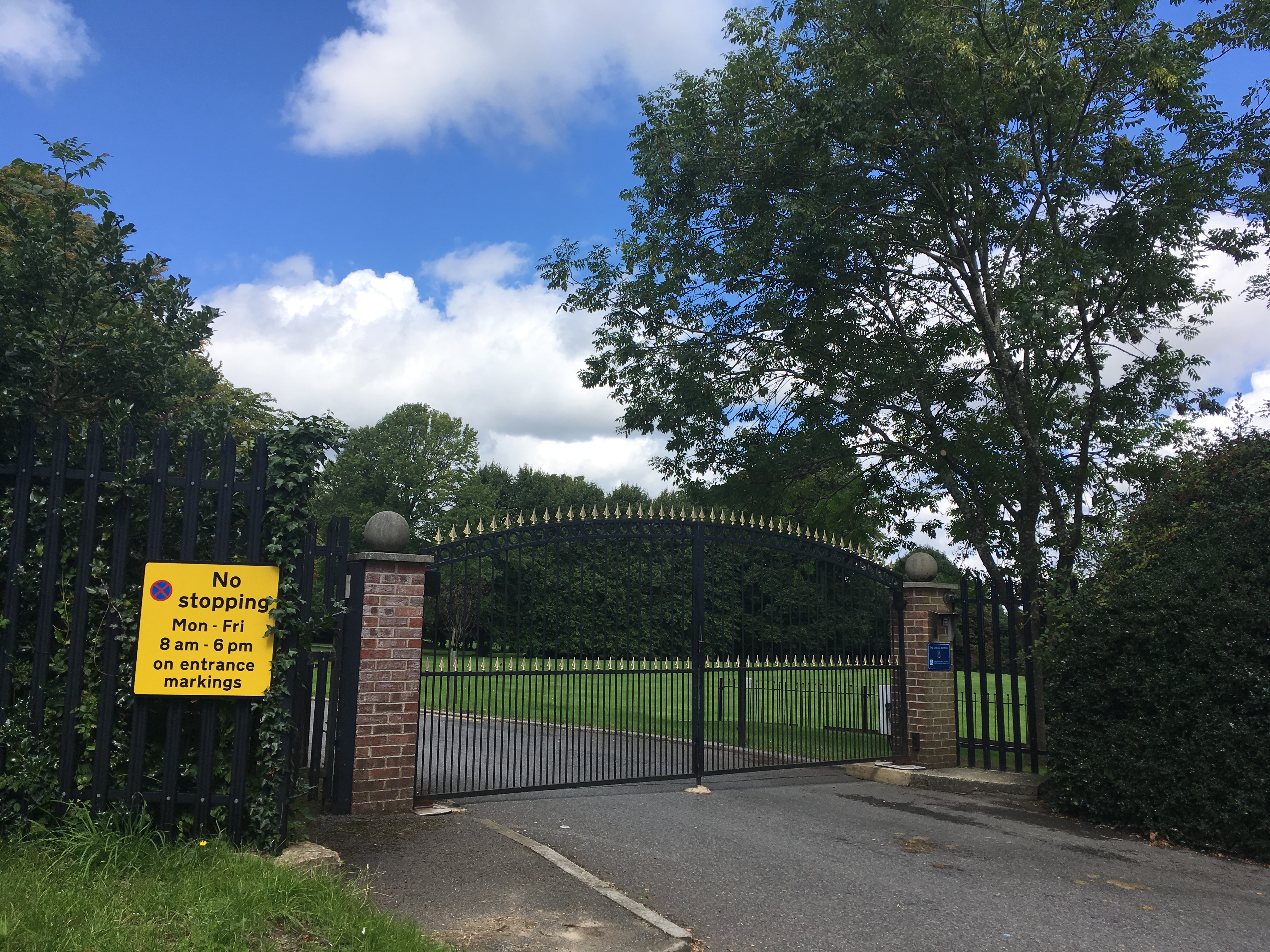 We’d found the hidden pond with relative ease. Now it was time to turn for home.
“Shall we carry on to Riverside Park or turn back and walk along Cutbush Lane to Mansbridge,” I asked CJ. “The Park would be the quickest way home but Mansbridge is prettier.”
“Mansbridge,” CJ said with a cheeky grin that told me he was thinking of a coffee stop in the Swan Garden Centre rather than distance or pretty walks.

So Cutbush Lane it was, past the Gregg School gates and along the leafy lane. Once upon a time this was not such an easy walk. Back in the days of my youthful meanders to and from the White Swan, Cutbush Lane was open to traffic and often used as a rat run. In those days walks along it often necessitated a dive into the bushes as a car, or more often, a motorbike came speeding past. Looking back it’s a wonder I lived  tell the tale. 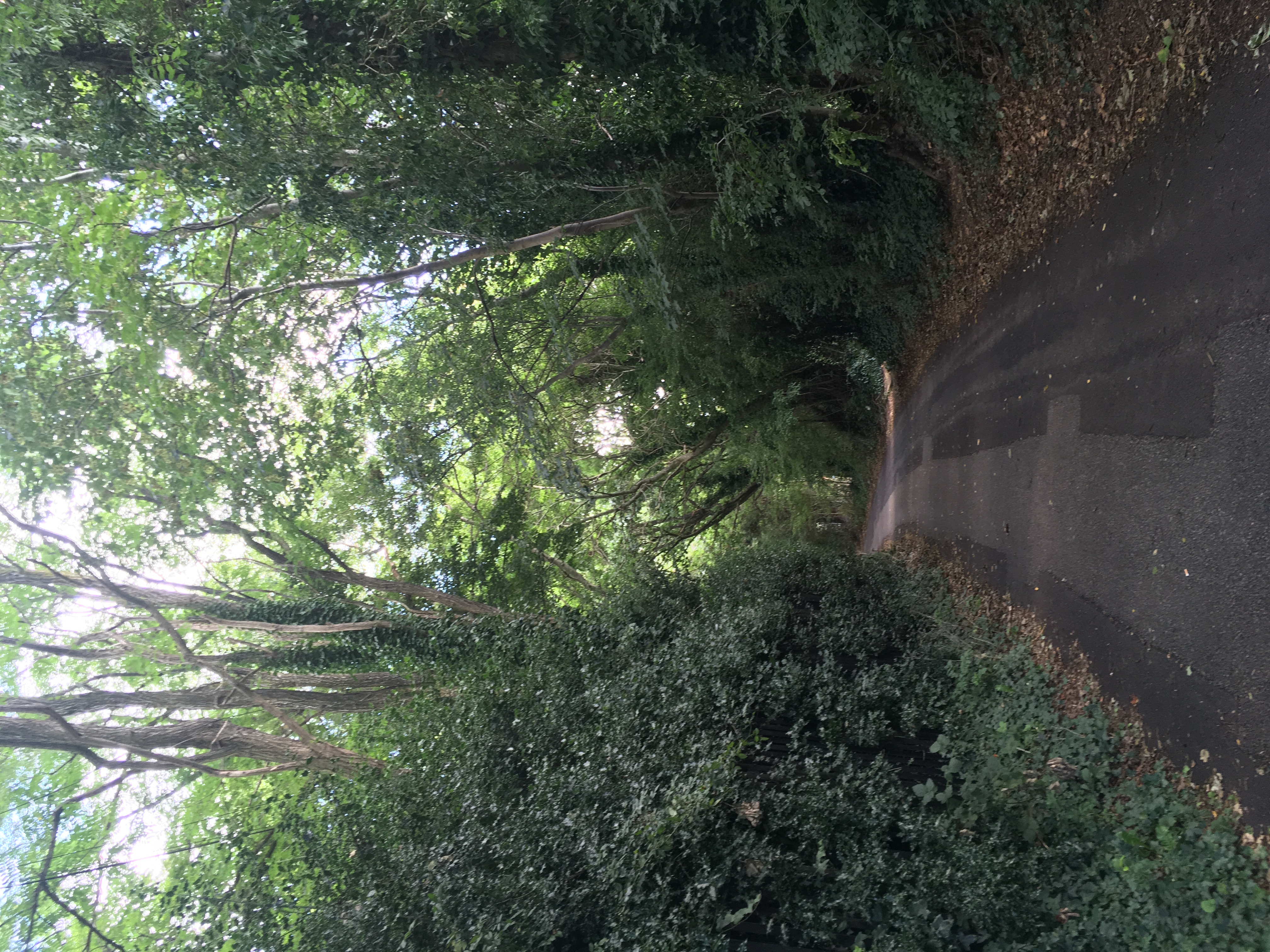 Shortly after we passed the playing fields leading to the River Walk, I spotted a sad looking yucca plant abandoned in the undergrowth along with its plastic pot. Who dumped the poor thing there and why is a mystery but I doubt it will survive. 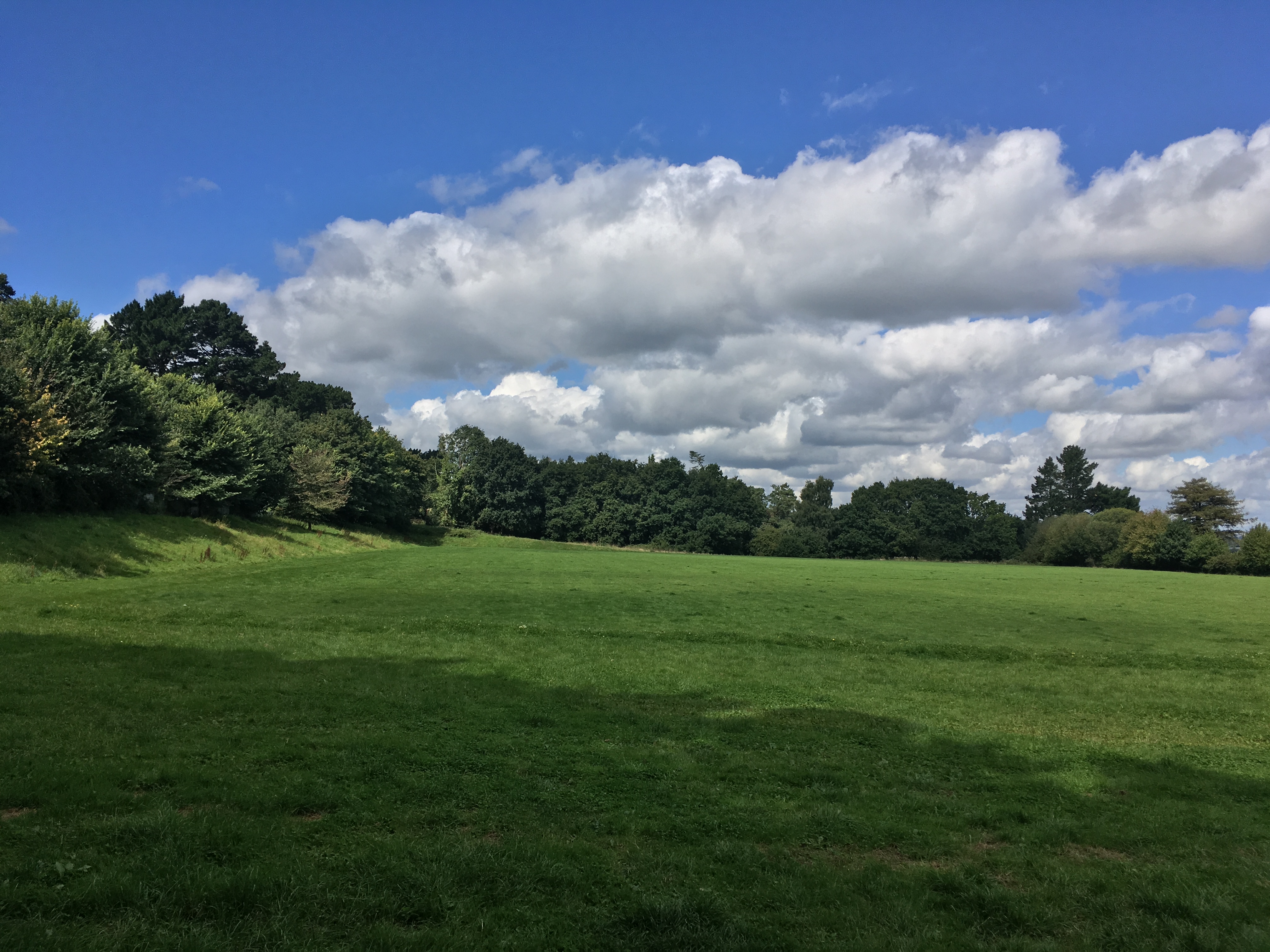 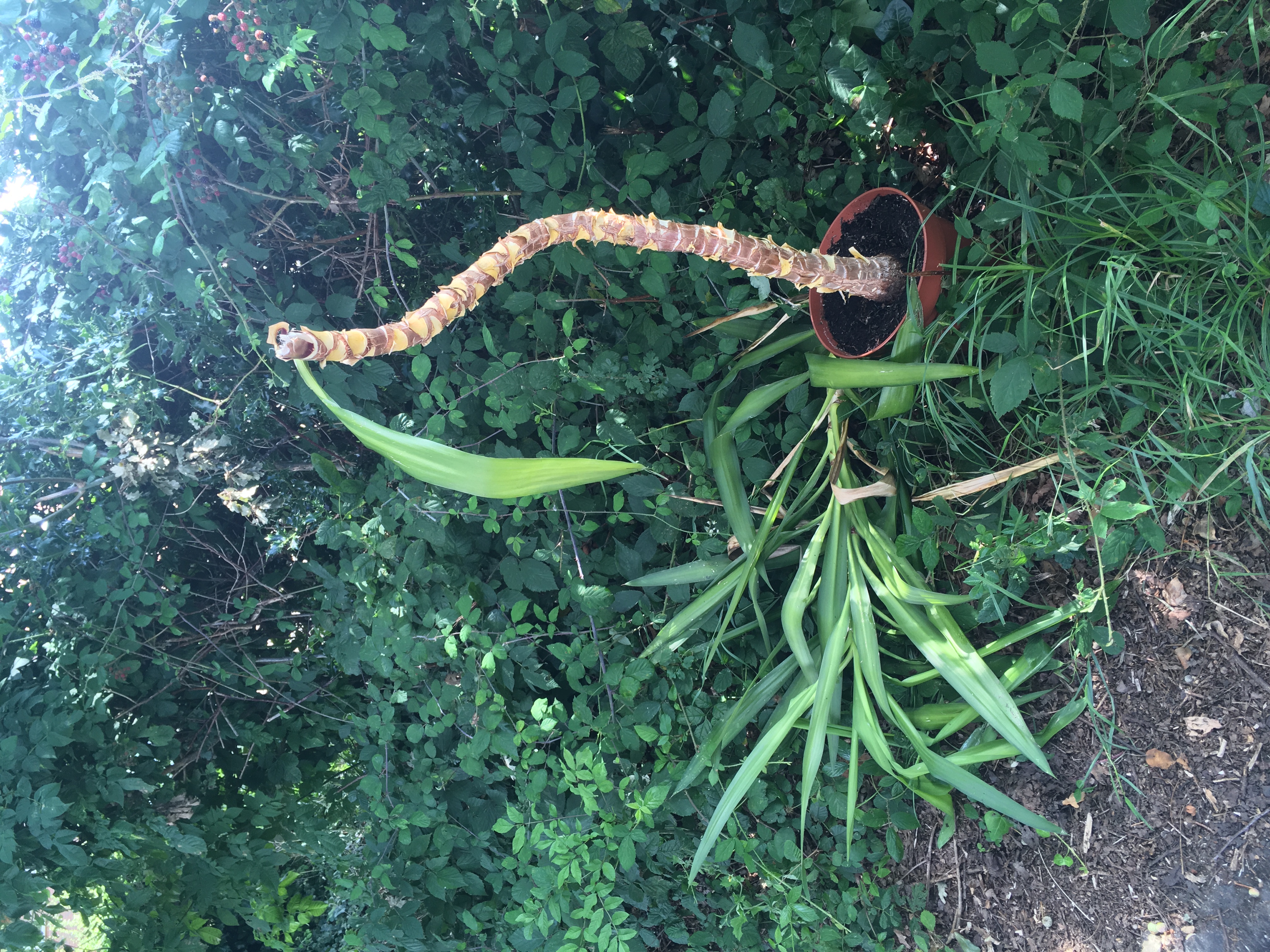 Fairly soon we could see the back of Rowan Cottage at the far end of the lane. Then it was on to Mansbridge Road and the garden centre for our coffee stop. As we drank CJ reminisced about all the times Grandma took him to the garden centre and how those visits always ended in the coffee shop with a cup of hot chocolate and an  extra jug of milk to turn it into two. 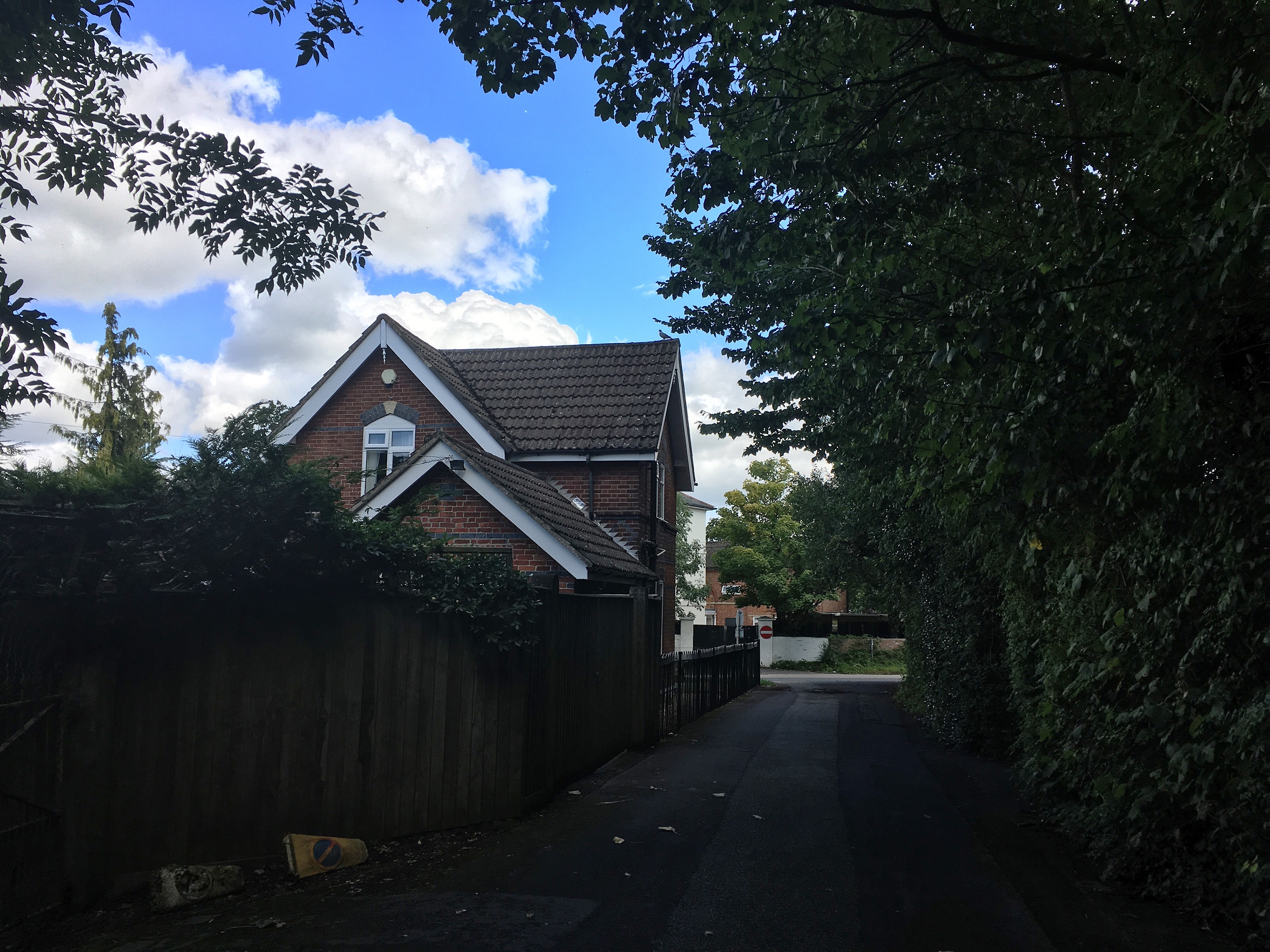 For once there was no stopping to look at plants but, on our way back to the road, we did stumble on some interesting fungi. What exactly they were I couldn’t say but they were large, bigger than my hand, and scattered on the grass close to the road. Their dark brown tops looked as if they’d been varnished and polished.  Something about them reminded me of little Yorkshire puddings that had risen unevenly and  been left in the oven a little too long. 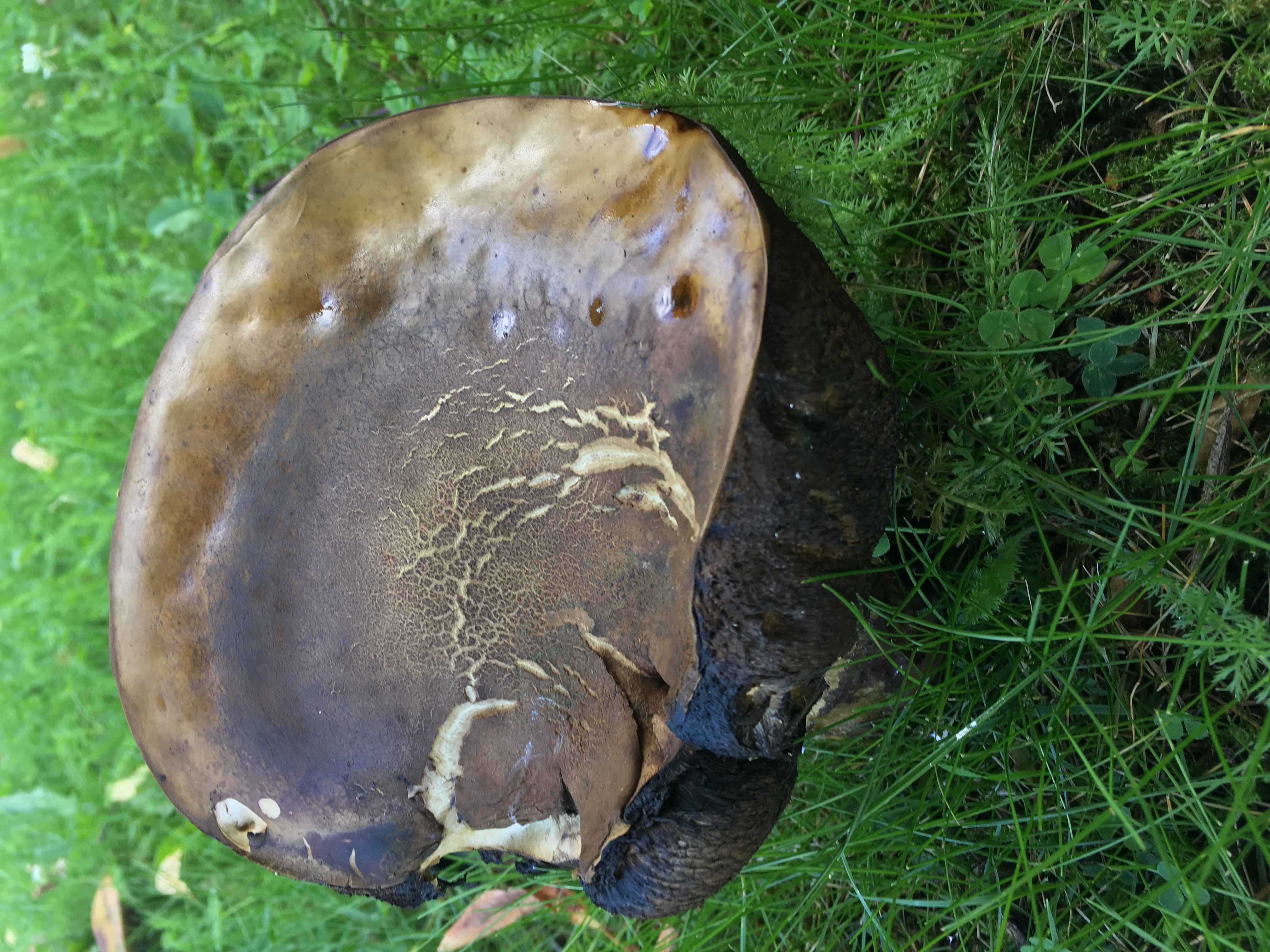 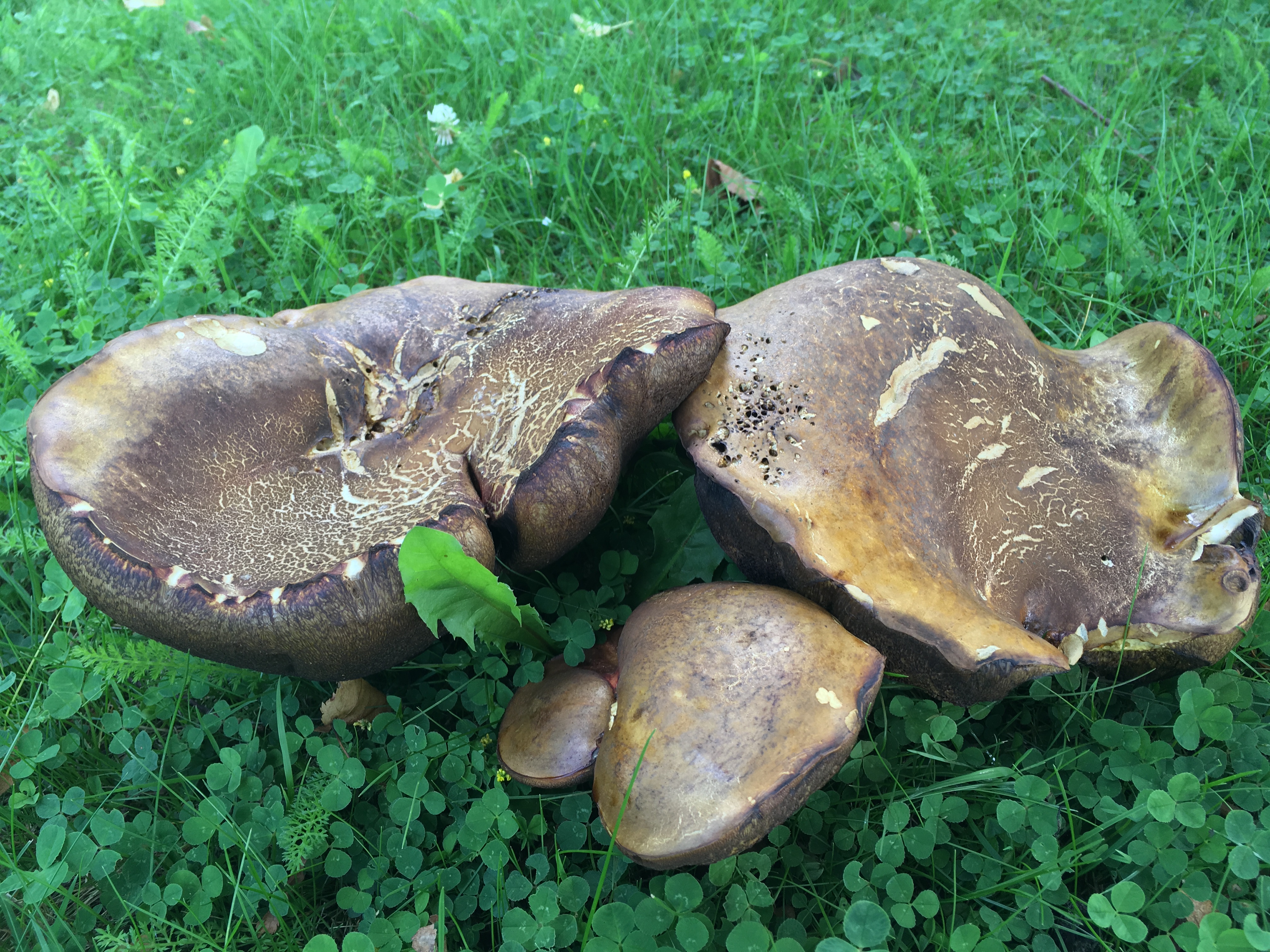 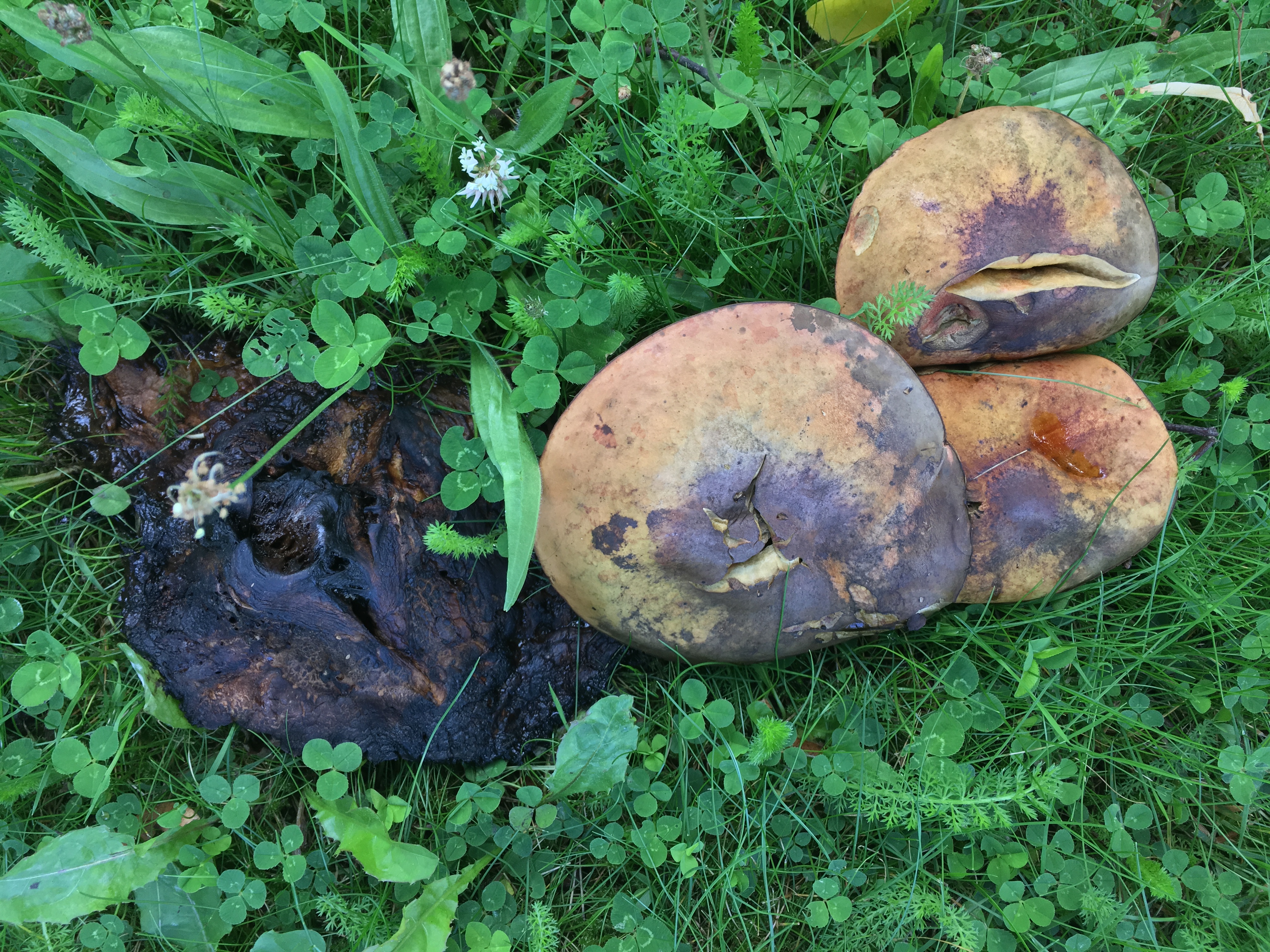 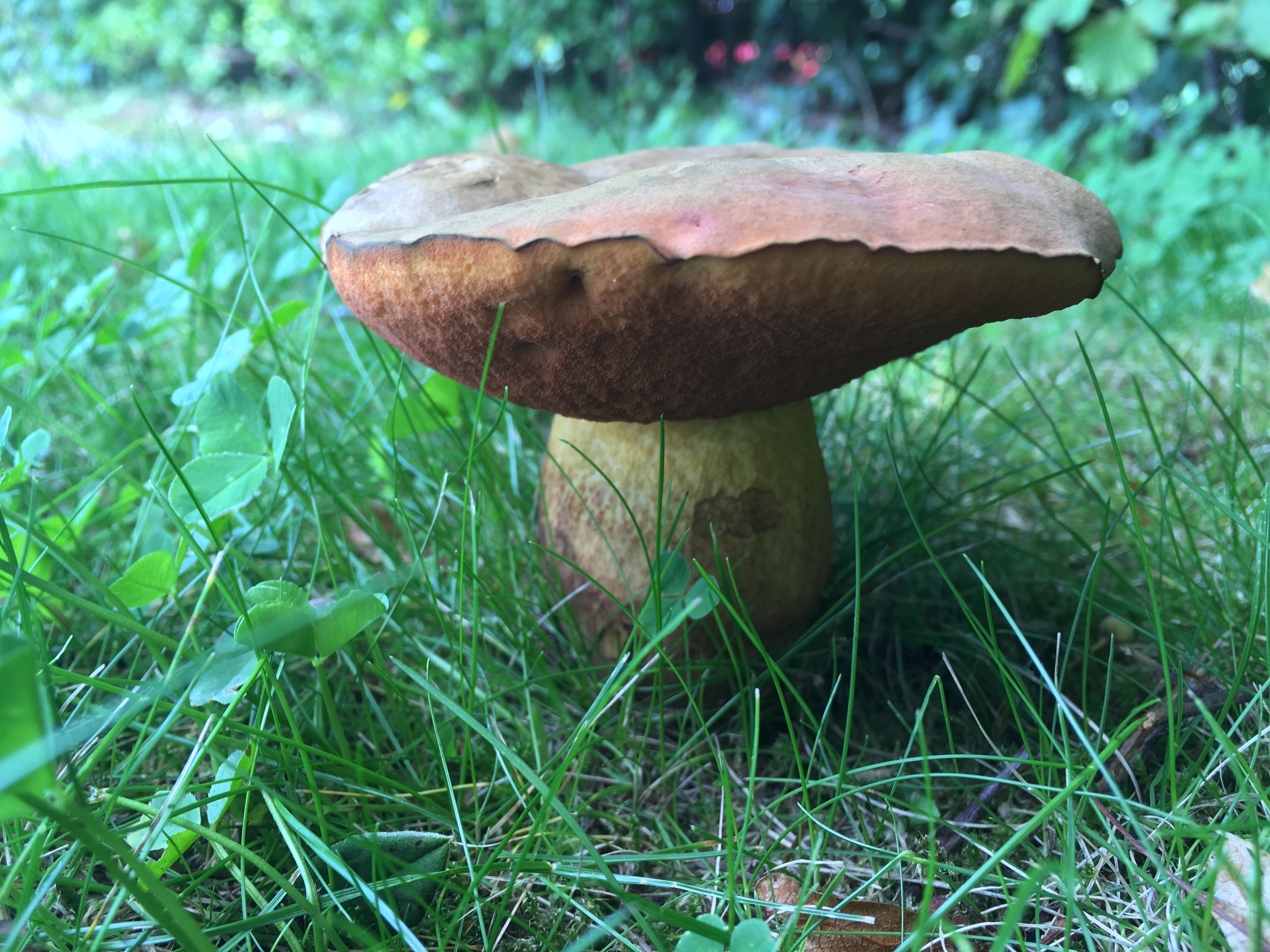 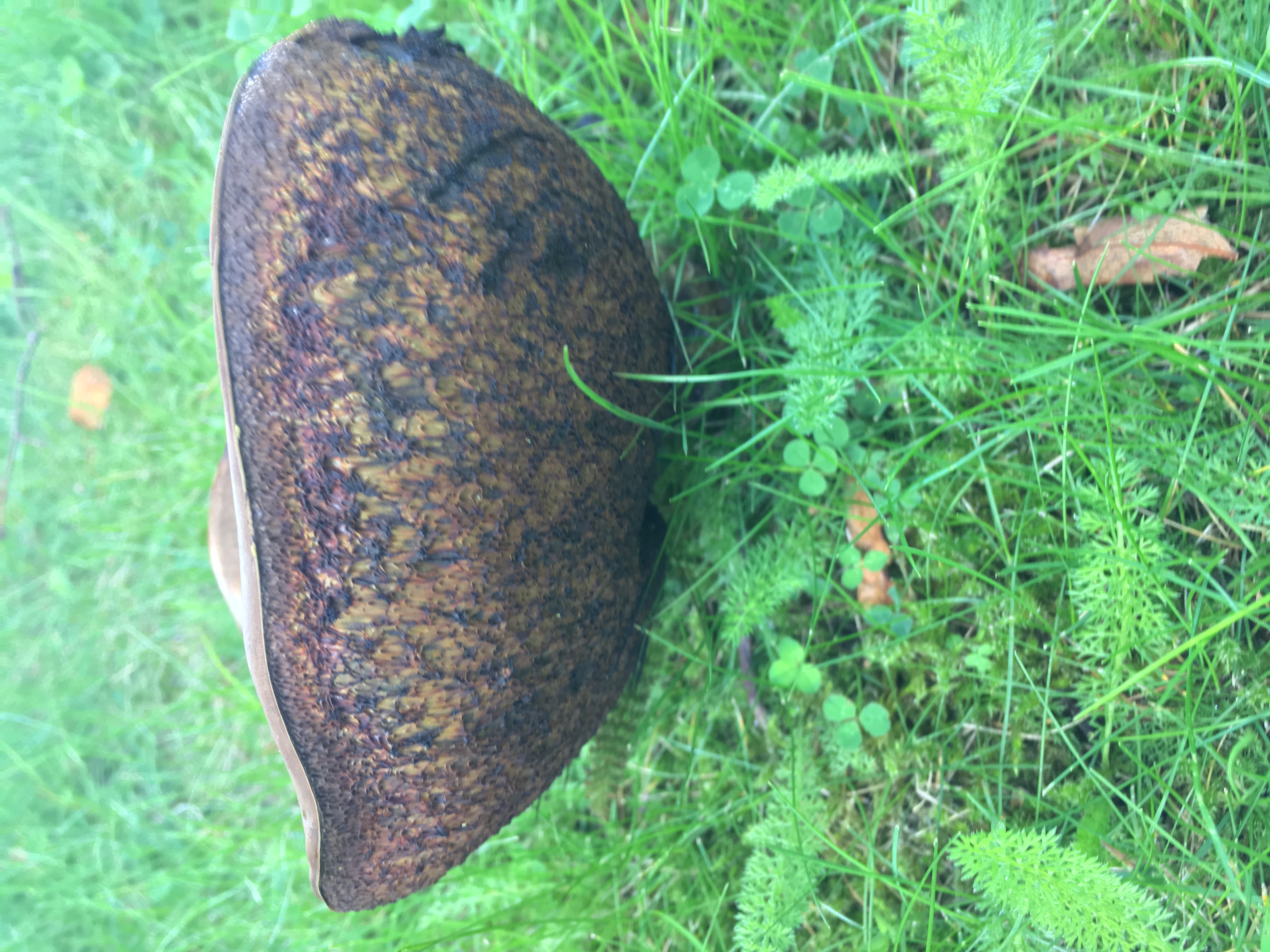 From the garden centre we turned down Gaters Hill, through the tunnel of trees towards our first sight of the river. In no time at all we were at Mansbridge where we bumped into Bob Painton putting up posters for his summer walk through Monks Brook Meadows. This was a walk I took with him a while back and would highly recommend. 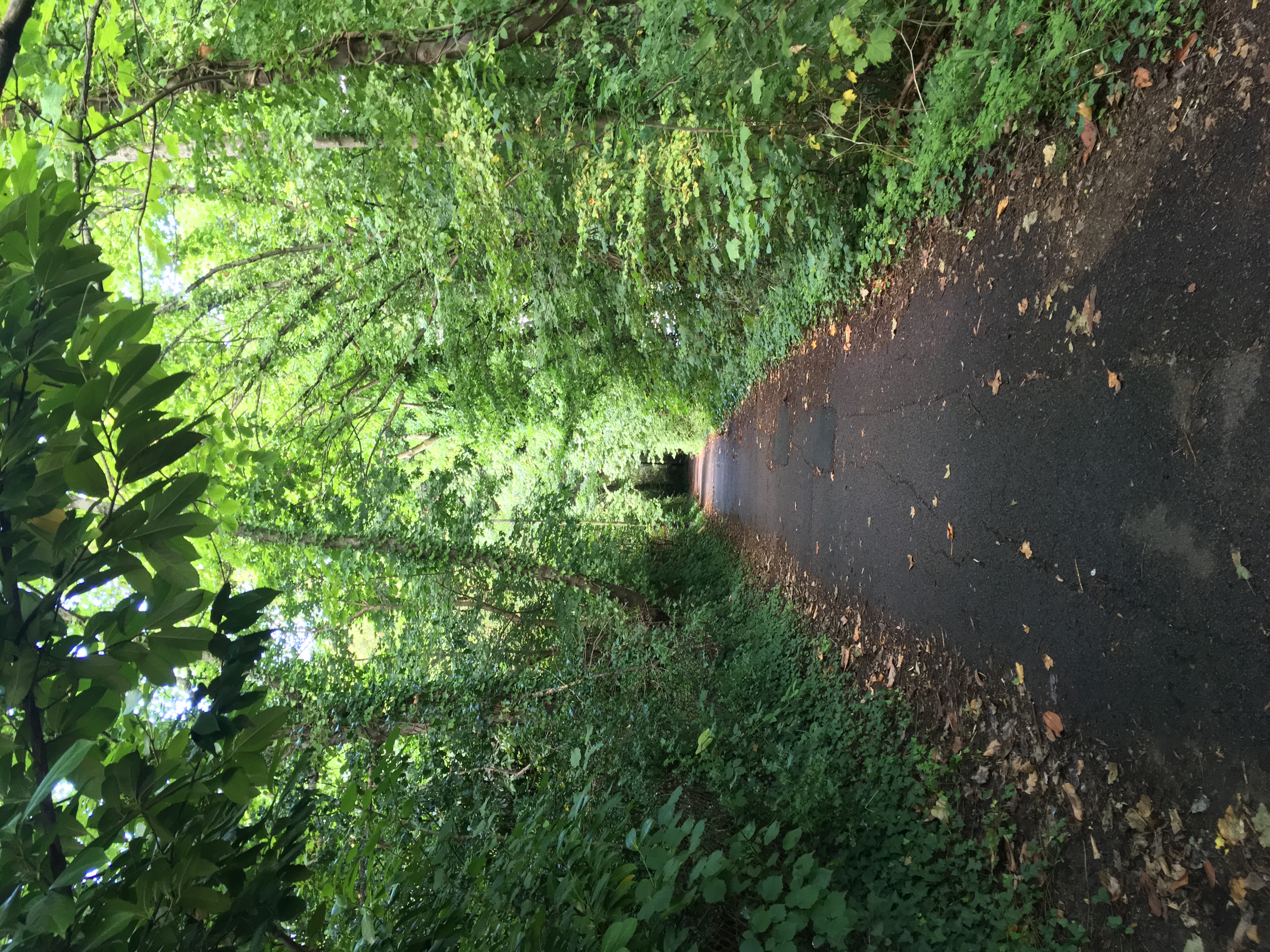 The old tree behind the bridge is still doing its best to regenerate but it doesn’t seem to be making much progress. Further along the bank more trees are trying hard to grow between cracks in the paving at the edge of the river. People on paddle boards were slowly making their way up river towards the bridge. It seemed to me walking was a far easier way to go and certainly drier. 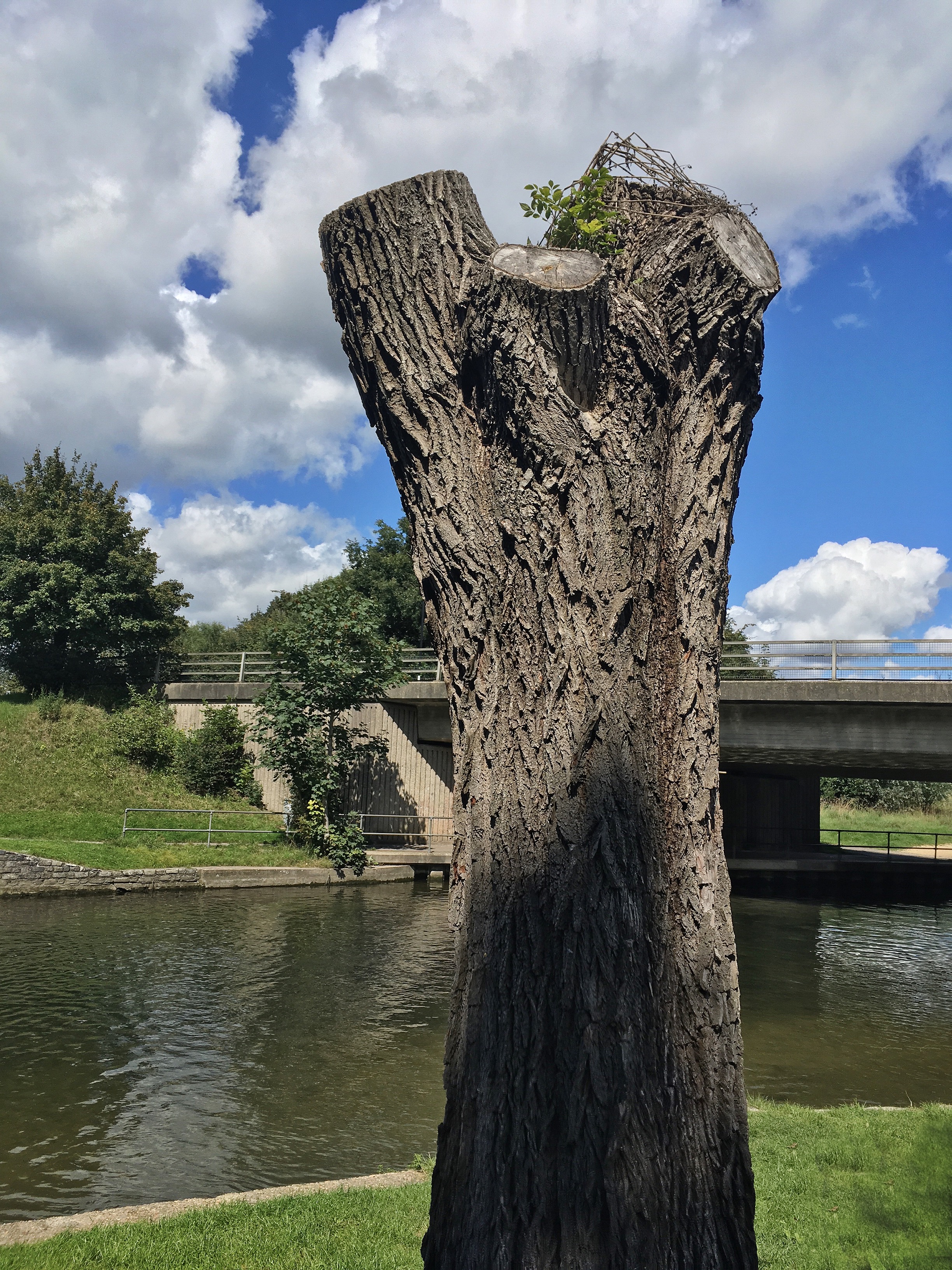 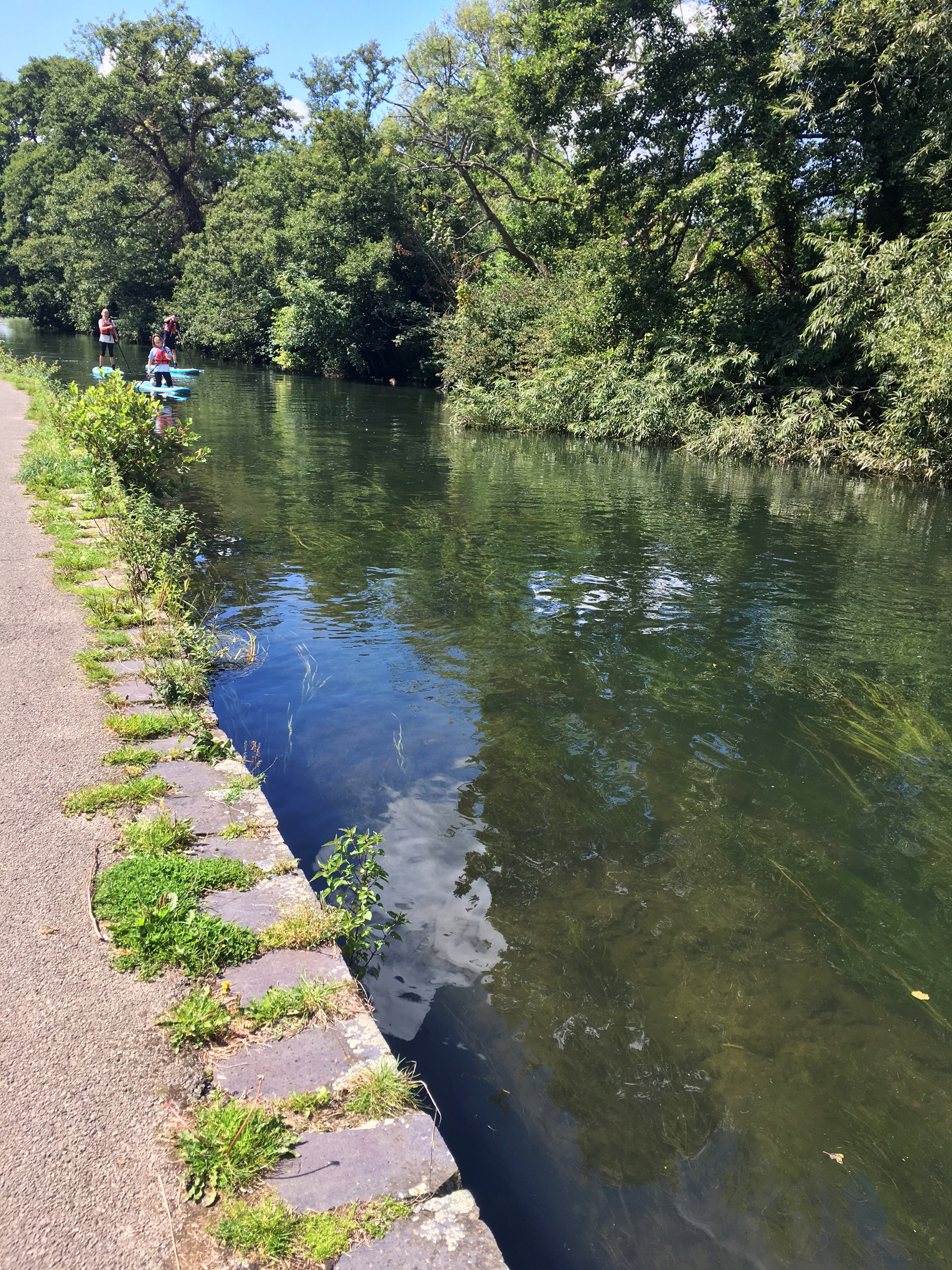 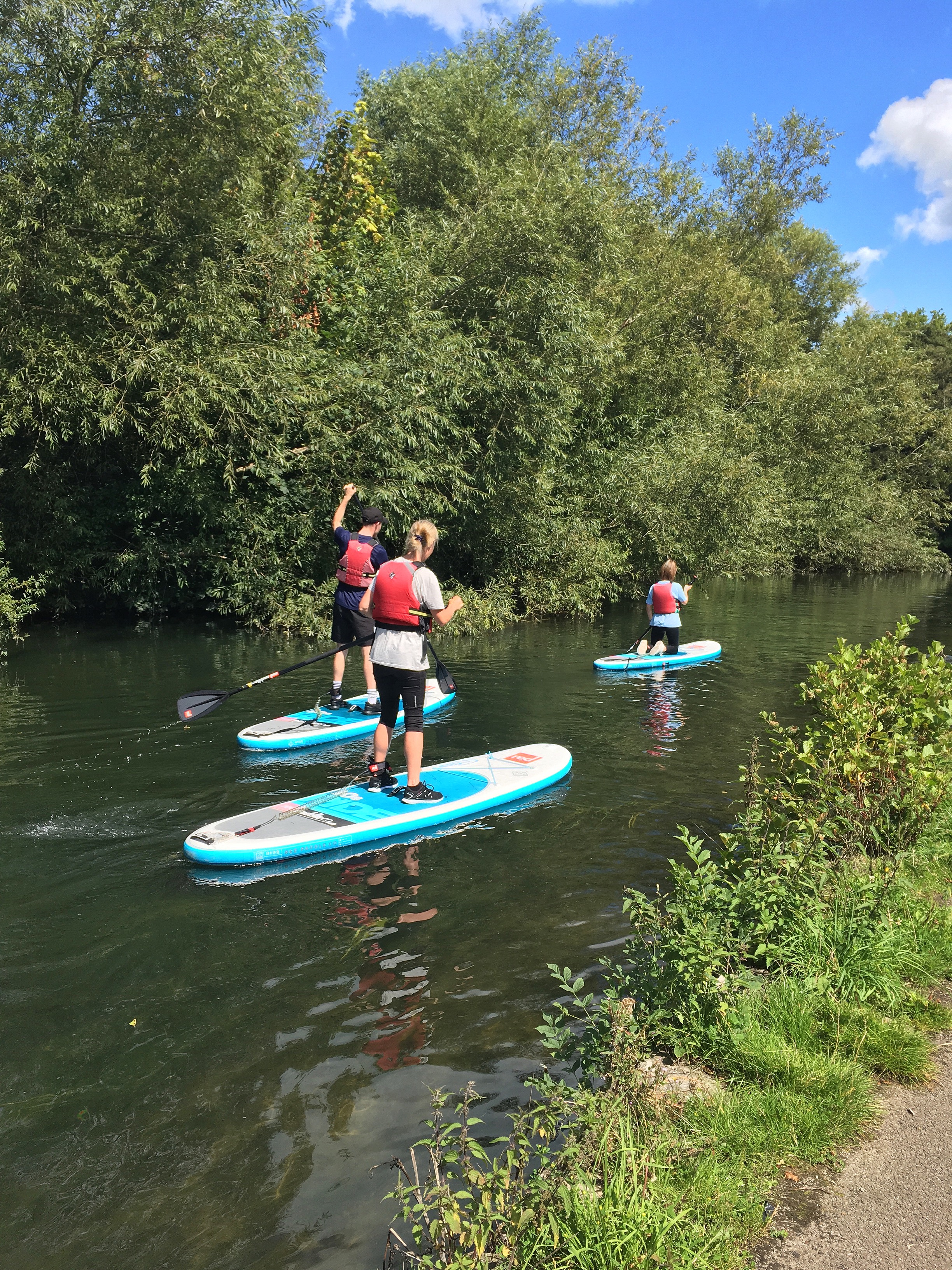 At the last bend before Woodmill we came upon two swans, our first of the day. Along with some duck companions, they were slowly ambling up stream, stopping every now and then to dive for food.
“I wonder if they are the orphaned cygnets from 2014?” I mused. “This was where they and their parents usually hung out.”
“Weren’t there three though?”
“There were. These two are a cob and  pen too so they’re probably mates, not siblings. Maybe one of them is an orphaned cygnet and the others have gone off elsewhere to find mates of their own. Perhaps next year there will be cygnets on this part of the river again.” 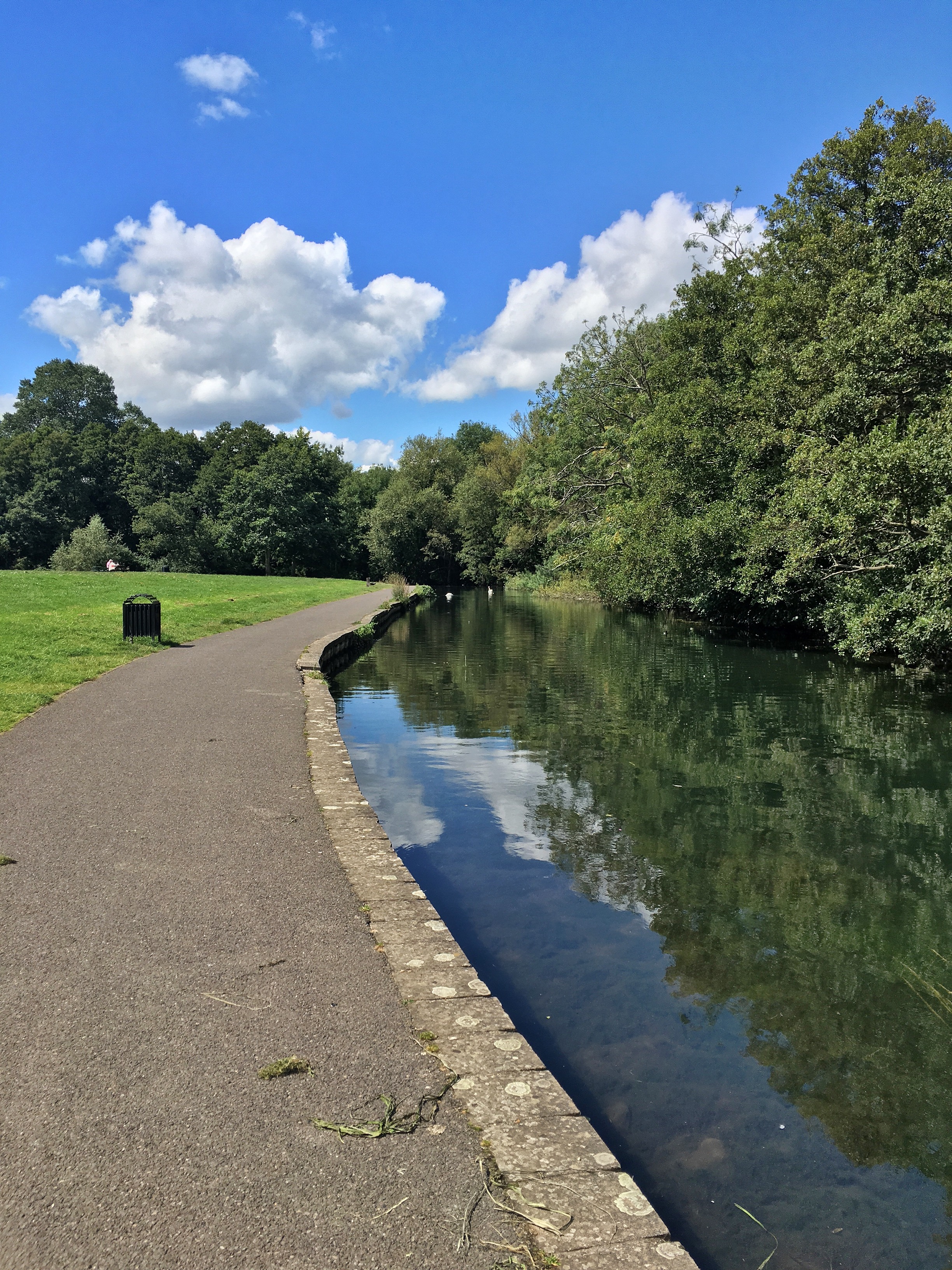 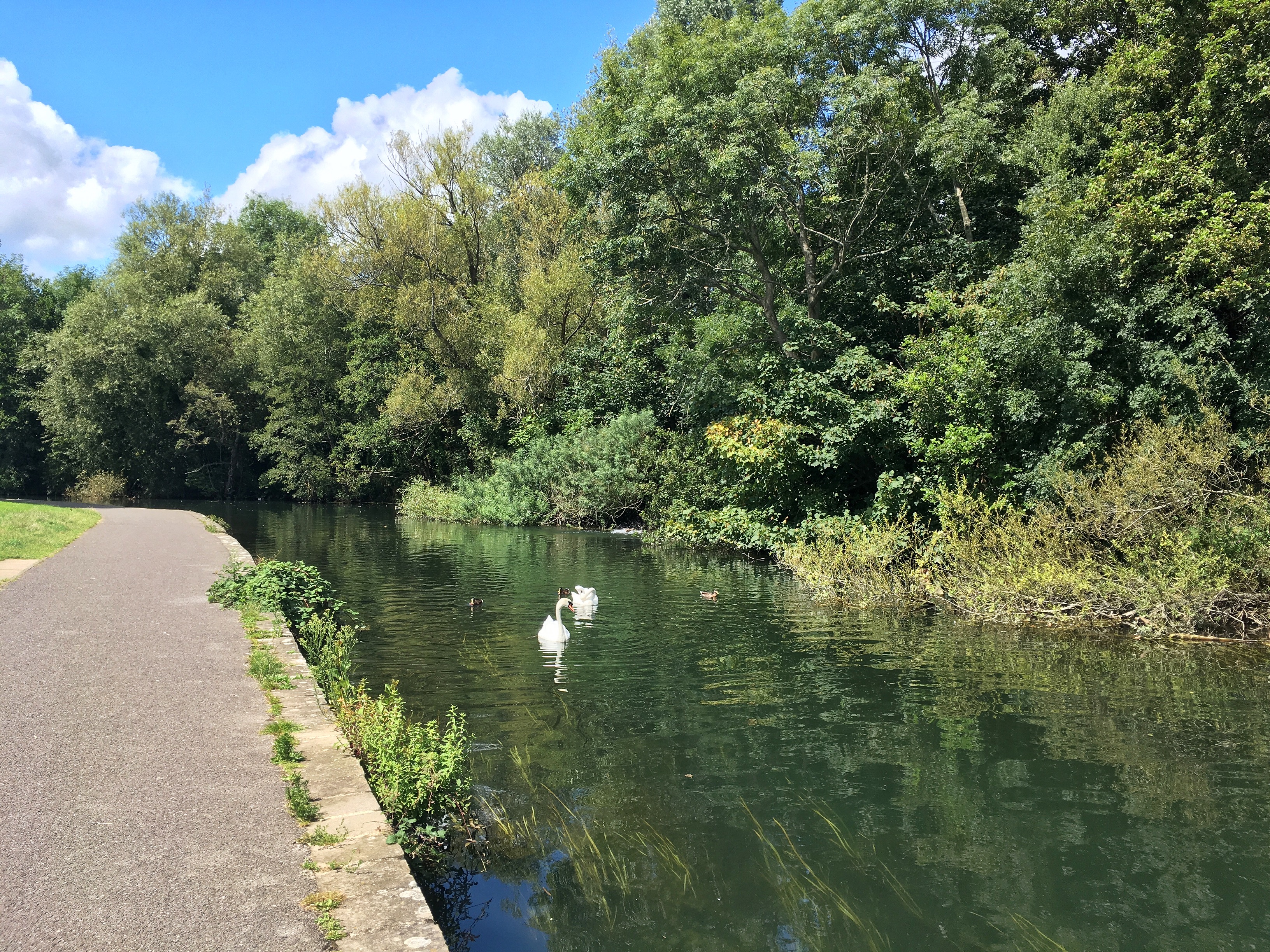 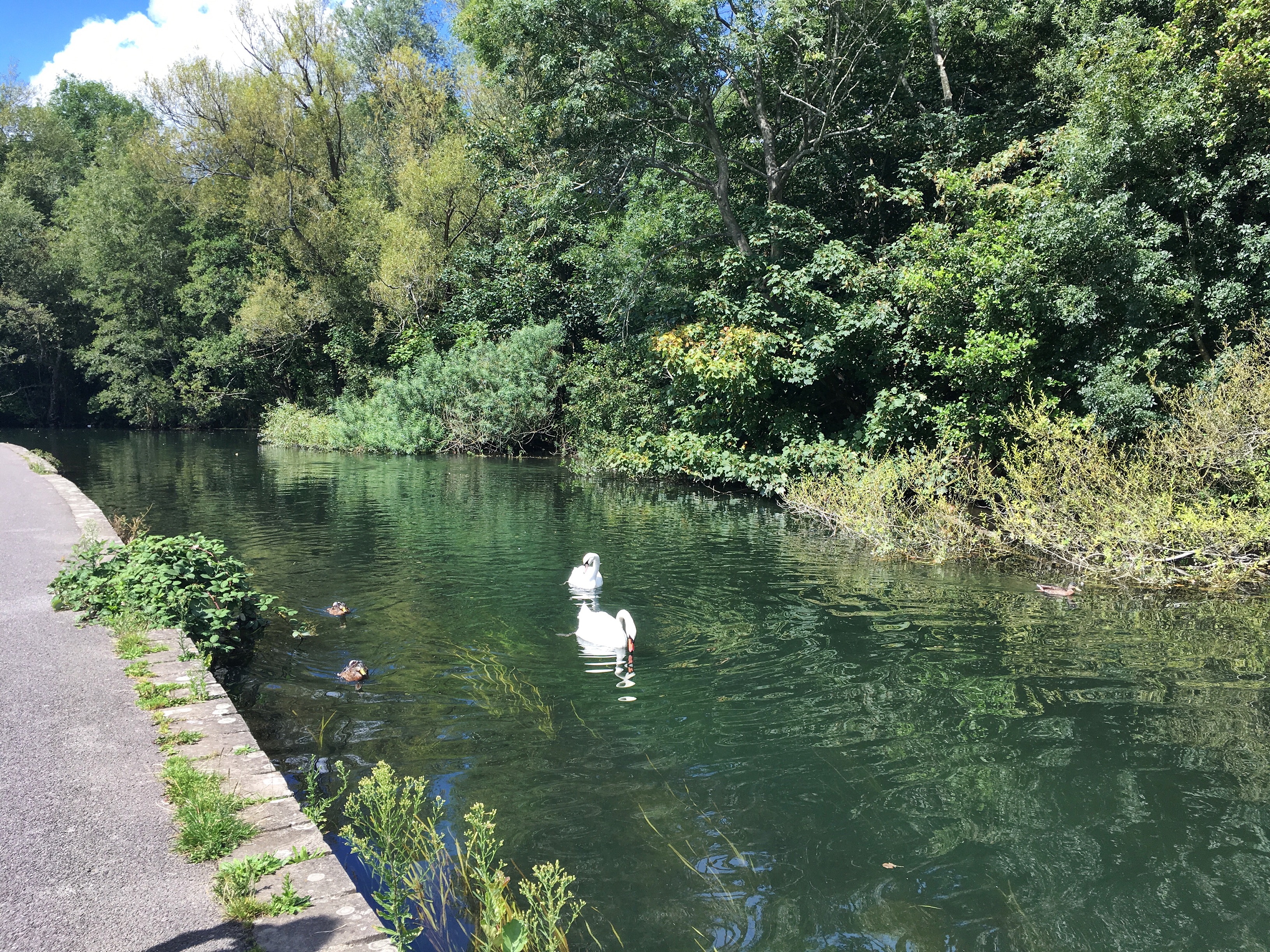 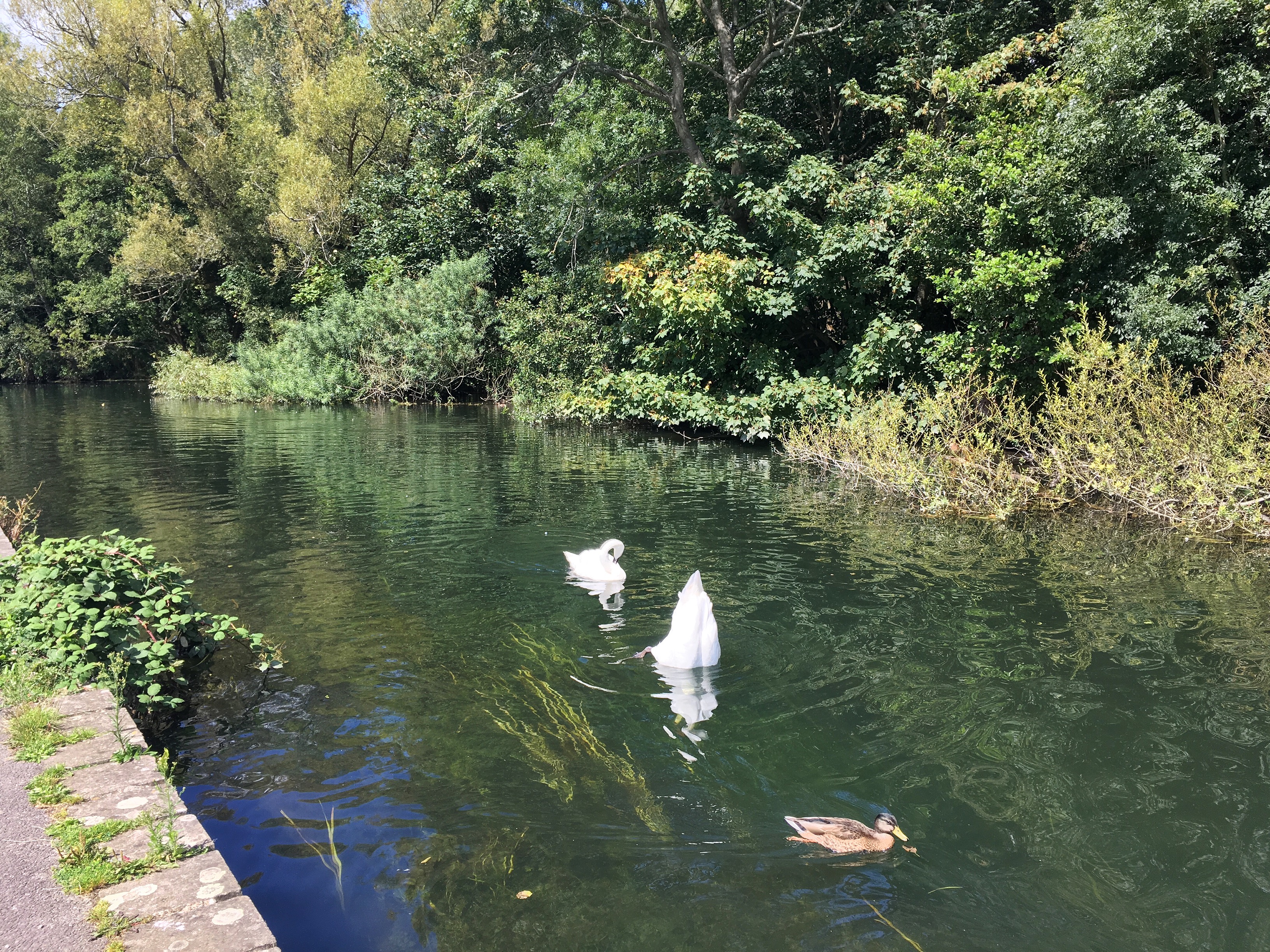 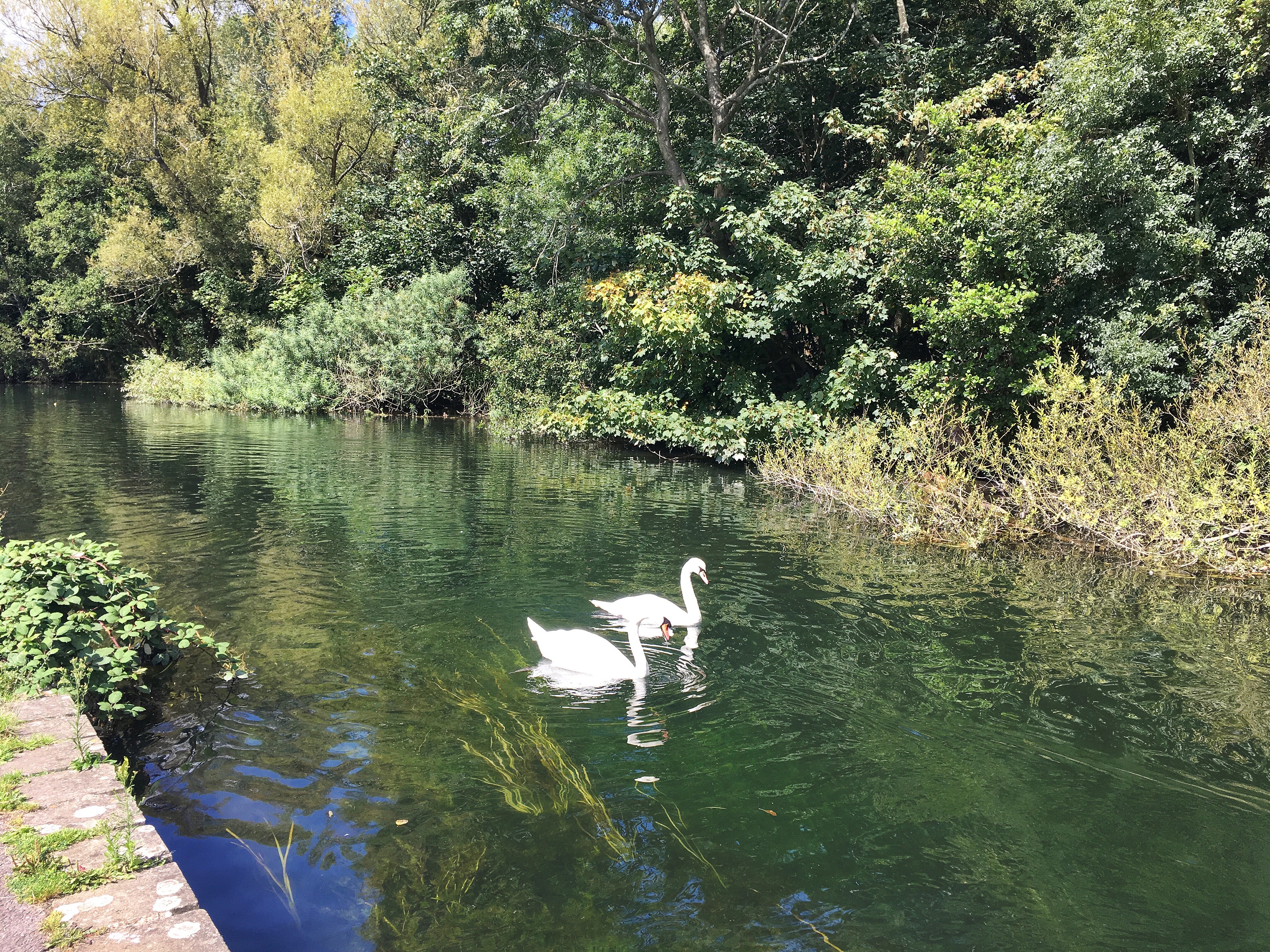 A little further on, a plane coming in to land reminded us how close we were to the airport.
“They always look as if they’re going to hit the trees,” CJ said as it roared past.
“There isn’t much margin for error but, as far as I know, none have ever ended up landing in the park yet.”
“Didn’t one crash on the motorway once though?”
“That was back in 1993, in a thunderstorm if I remember rightly. It was only a light aircraft though and no one was hurt, although it did hit car.” 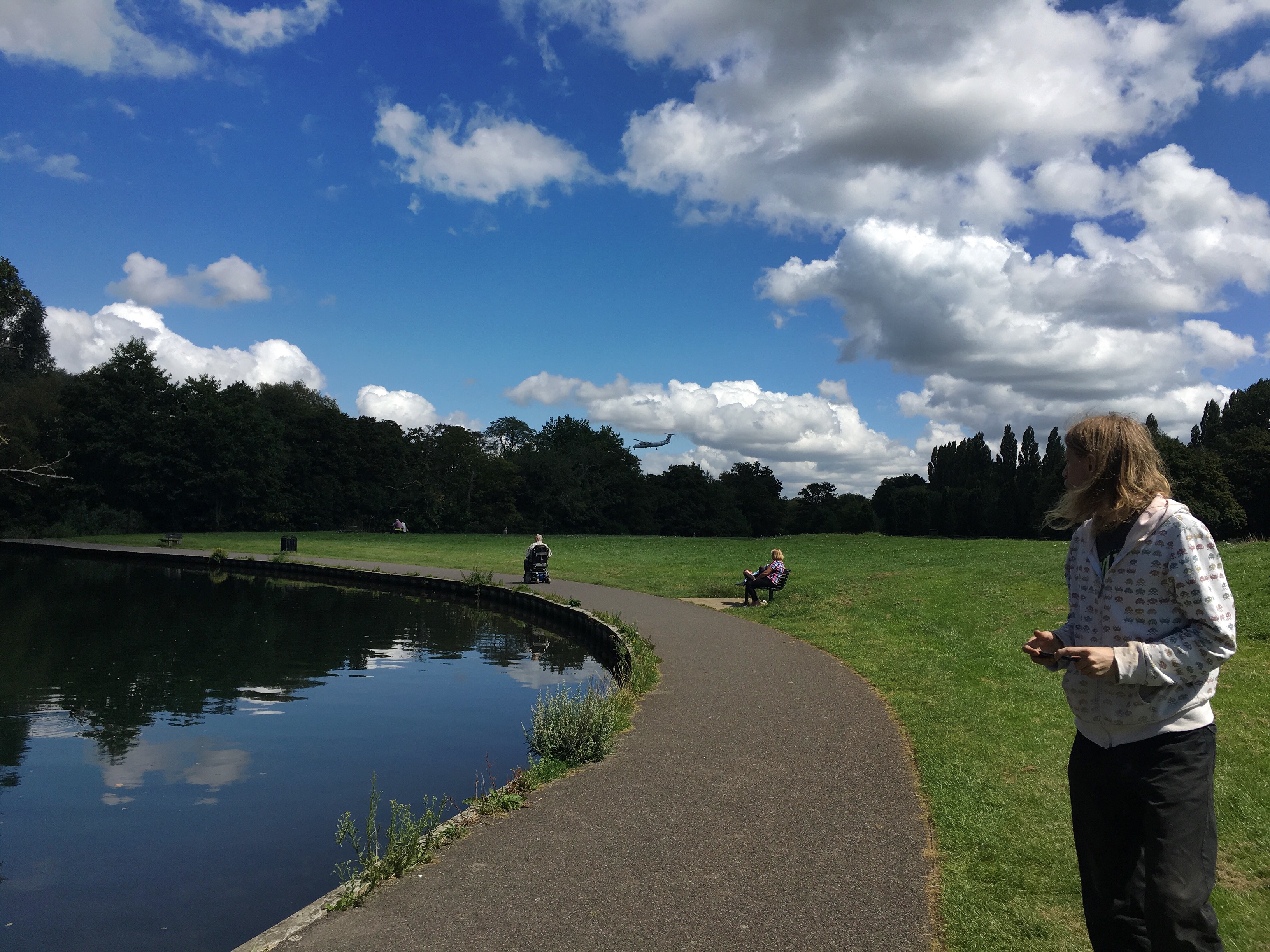 Close to Woodmill Lane we met up with the greylags. Fearless as ever, they swam close to the bank and looked at us distainfully when we didn’t produce any food for them. The banks here are overgrown and crowded with wild flowers. Once the noisy geese had passed I stopped for a quick photo of the knapweed flowers. A lone swan watched suspiciously from the shade of the trees on the opposite bank. 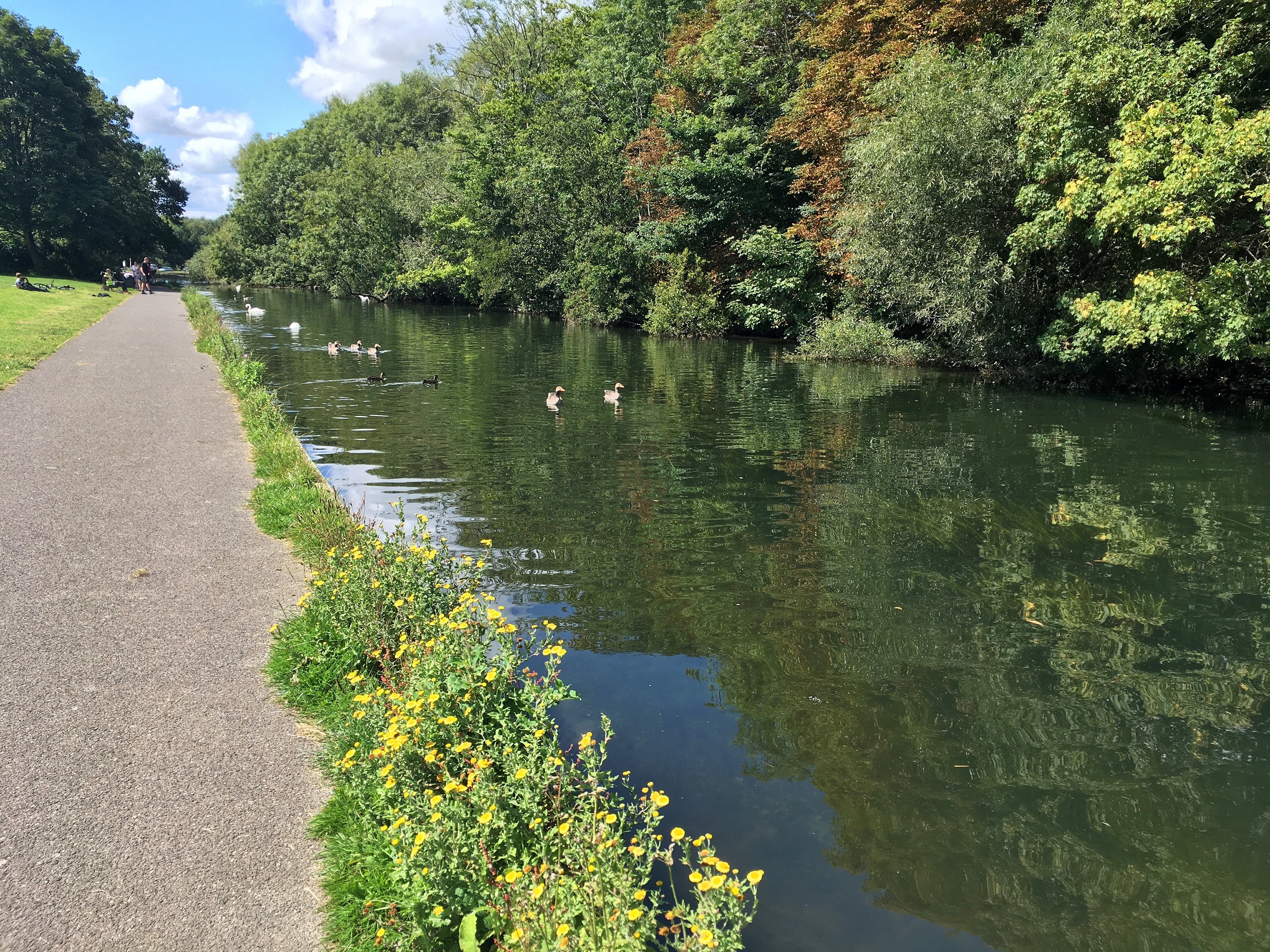 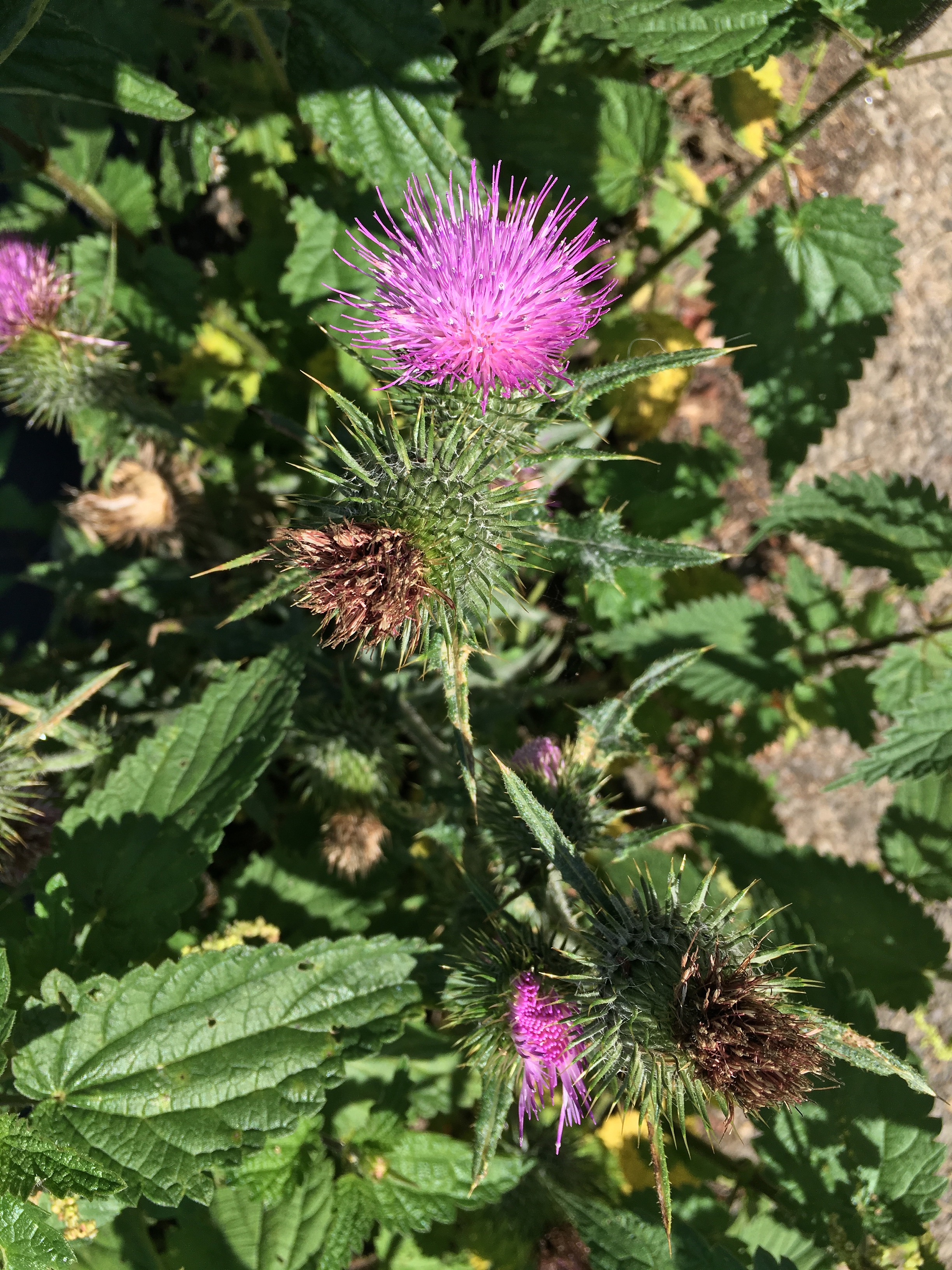 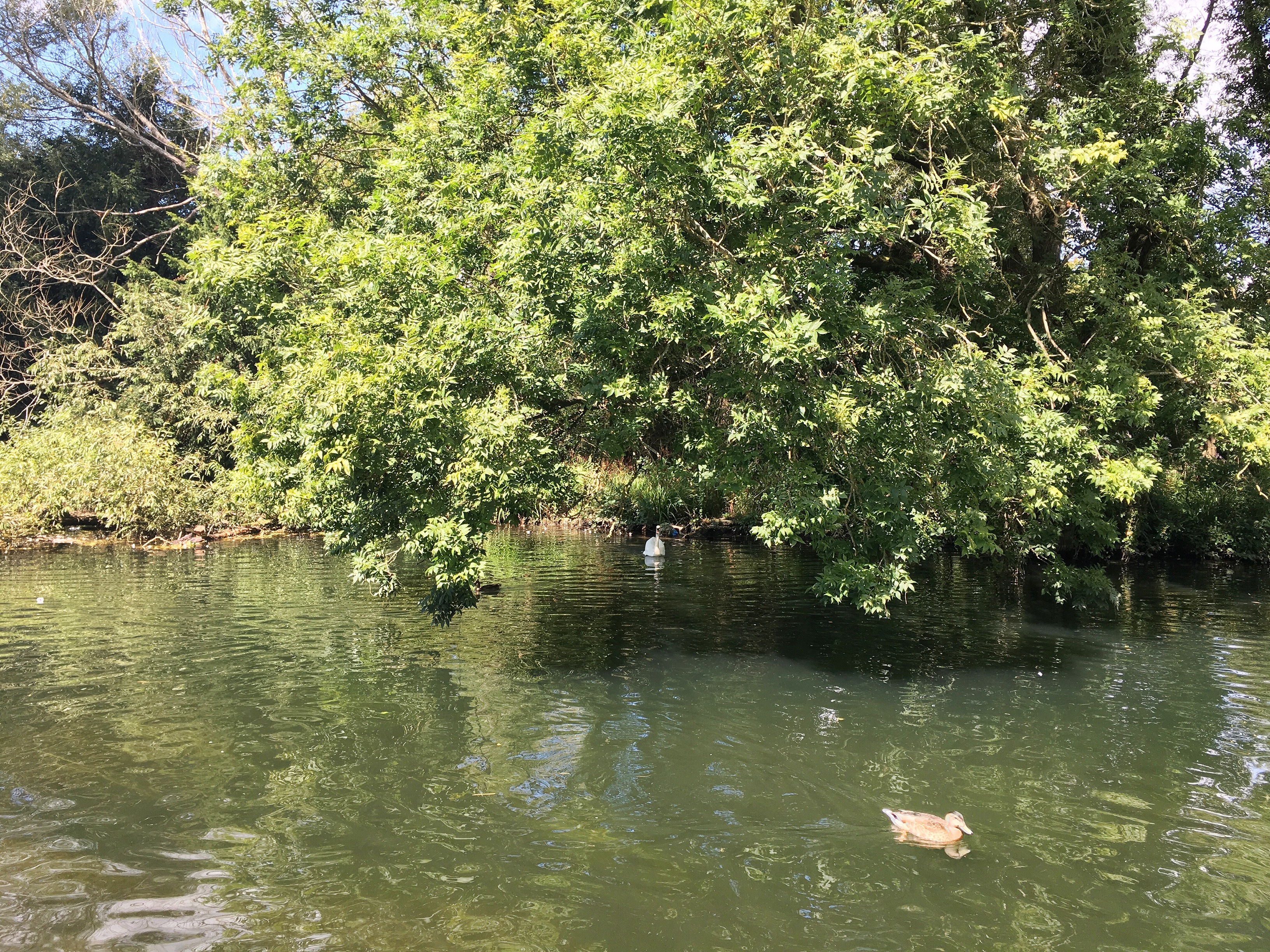 Close to the mill some people were crouched on the bank feeding the birds. Swans, geese and ducks surrounded them. We stopped for a while to watch and I noticed one of the swans looked a little the worse for wear. It had a balding patch on the back of its neck and, on closer inspection, the flight feathers on one wing were stripped. It looked very much like a minor case of angel wing, similar to the poor black cygnet further down stream. This incurable wing deformity is caused by poor diet, mainly feeding water birds white bread. People like feeding the birds but I wonder if they’d enjoy it so much if they knew it could cause this horrible deformity and probably shorten the birds life considerably? 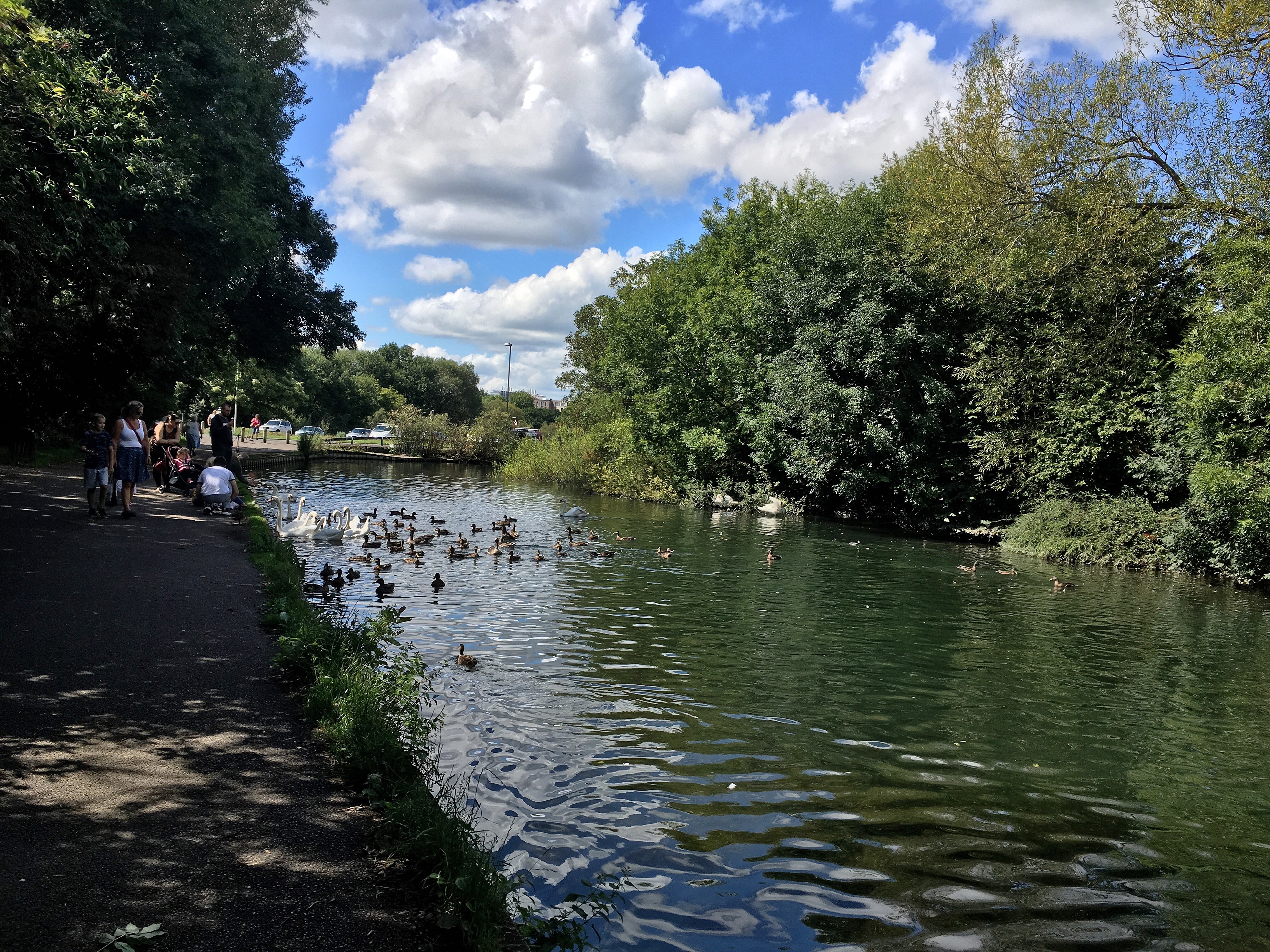 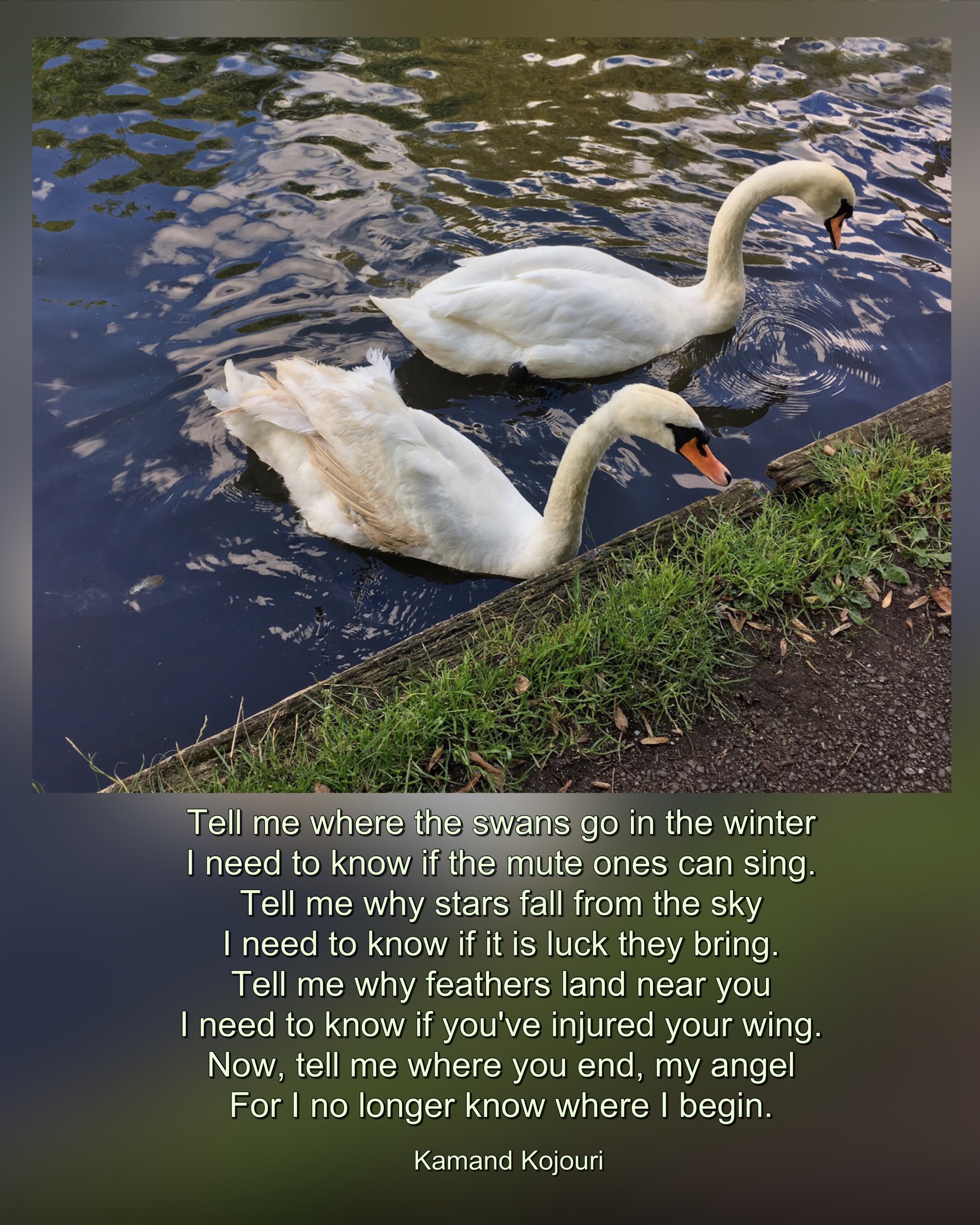 We walked on past Woodmill talking about the swans and the delicate balance of nature. Although the river is rich in food, people have always liked to come to feed the birds and the birds themselves seem to like being fed. Until recently this hasn’t proved to be much of a problem but, in the last year or so, I’ve seen two birds with angel wing. Perhaps more people have come to feed the swans since the black cygnets arrived or maybe the quality of the food being thrown has changed? Either way it’s a sad thing to see a beautiful bird deformed by kindness. When we reached the jetty we knew our walk was almost over. It hadn’t been a long walk but it had been interesting all the same. Now it was time to leave the swans and the river behind and get back to my painting. 4 thoughts on “To the river”