Most people like a little lie in on a Sunday morning, me included, but today, not long after eight o’clock, I was in Winchester. This was mostly because of the Winchester Half Marathon. Commando is pacing and I am tail walking, like I did last year. This morning there was a training session for the runners to get used to the route. There was no way I’d be taking part in that because I’d never keep up but, rather foolishly, I decided to go along anyway and have a walk. When the alarm went off at silly o’clock this morning it suddenly didn’t seem like such a good idea but Mitch was keen to come walking with me so I dragged myself out of bed.

Mitch, is Gerry and Teresa’s son. He’s barely nineteen but, for some unaccountable reason, he thought an early morning walk with me would be fun. He also likes a bit of history. My rather vague plan was to revisit the Keats Walk, at least part of it, and perhaps climb St Catherine’s Hill. First though, there was a stop off in Costa to set us up for the walk. Mitch is almost as fond of Costa hot chocolate as I am of their coffee.

In the end there was a bit of a wait because a tramp had left a sleeping bag and a needle on the doorstep and the staff couldn’t open up until they’d cleared it away. This is not the kind of thing you’d expect in Winchester but I have to say the sleeping bag looked almost brand new and the needle looked more like an epipen  than something a junkie would use. Obviously you get a better class of tramp on Winchester streets.

Eventually we set off towards the cathedral with me wittering on about consumptive Keats, his daily constitutionals, the tragedy of his unconsummated love for Fanny Brawne and his death at the age of twenty five. To his credit, Mitch seemed interested, although he may have just been being polite. Luckily for him, I managed to stop myself quoting any poetry, although wisps of it were whirling around my head like mist on the meadows as we strolled through the cathedral grounds. Both the grounds and the arches of Curle’s Passage were surprisingly quiet at such an early hour. The passage in particular seemed alive with history in the morning light. If a ghostly monk had appeared I’d hardly have been surprised. 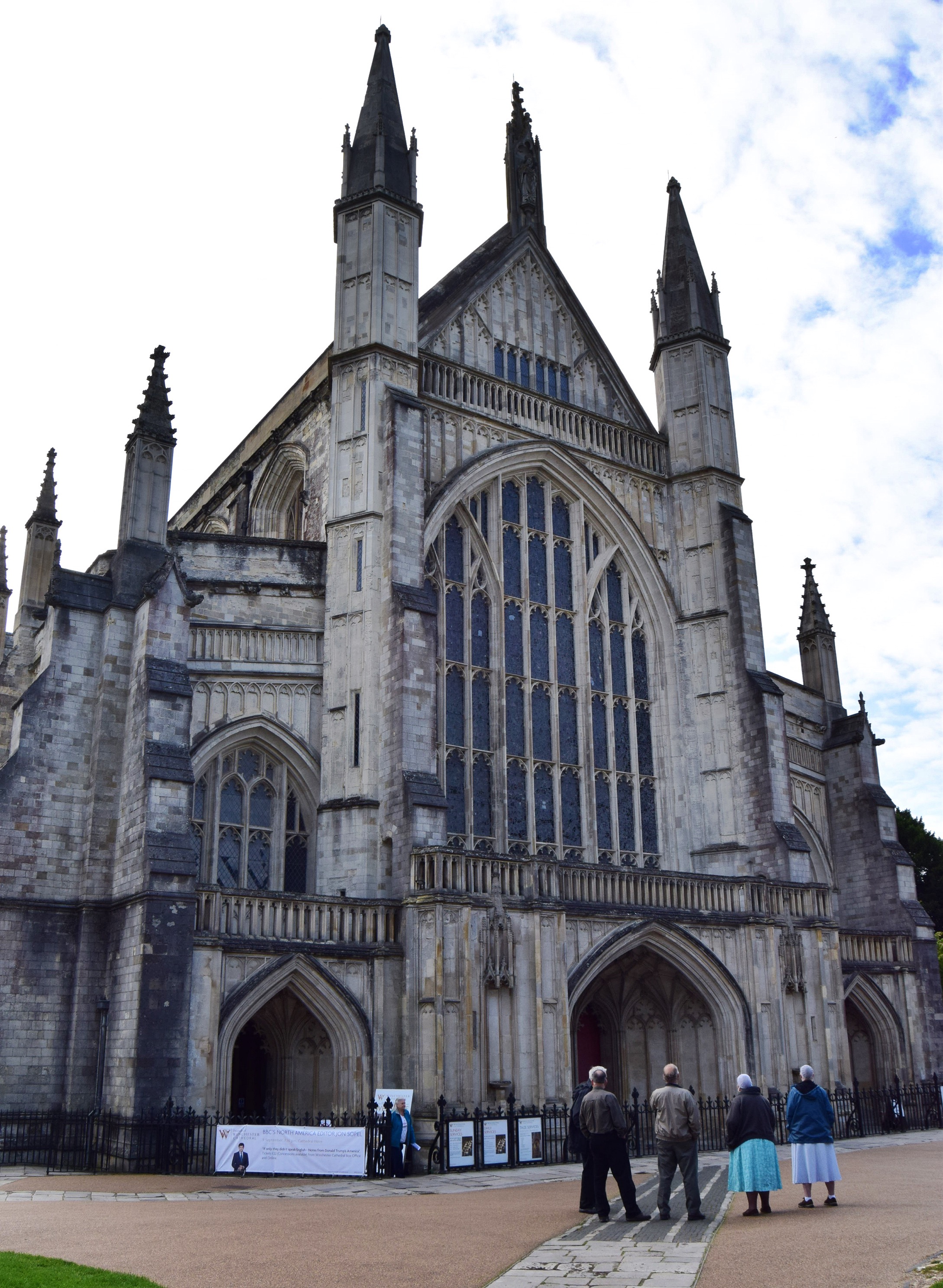 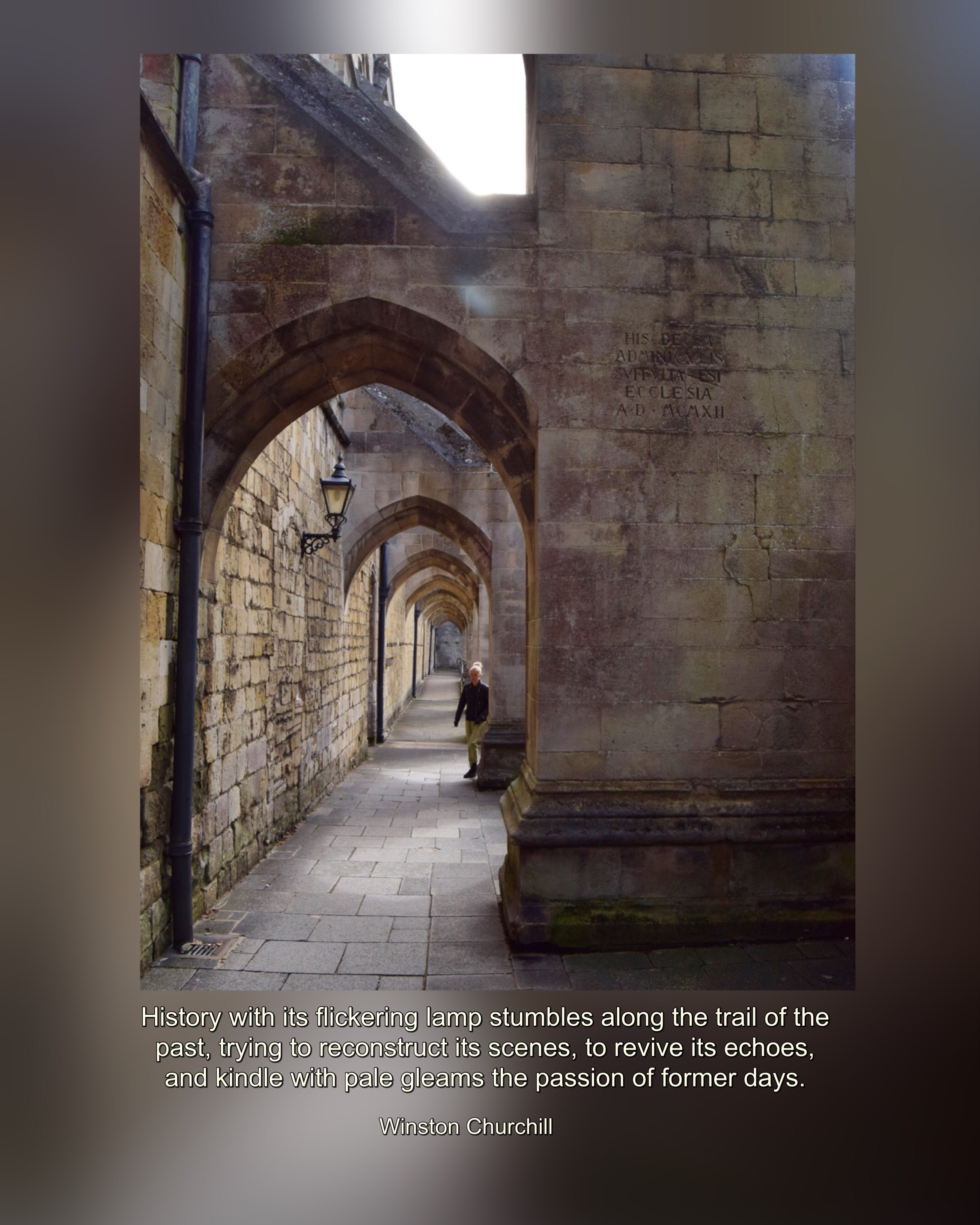 In cathedral close we stopped for a moment to admire the Pilgrim’s Hall, built in around 1308, once used as the priory guest house and now part of the Pilgrim’s School. The close, too, was deserted, the historic atmosphere spoiled only by the rows of parked cars. Even the charm of the lovely fifteenth century Cheyney Court, with its honey coloured wattle and daub walls, had modern day scaffolding around it. It seemed a shame because the light was perfect, but I took a photograph as best I could. This was once the bishop’s court house, now it’s a private home. Imagine living somewhere so beautiful!

We passed through Prior’s Gate, the main entrance to the Close. The whole archway was thick with wisteria but, of course, it was too late in the year for the wonderfully scented flowers. Then it was on through Kingsgate, built on the site of the Roman gates to the city and the entrance to the royal palace in the tenth century. This gate probably dates from the fourteenth century and has a book shop under the arch. This morning it was closed.

There was building work going on here too so we didn’t hang around. Mitch proved he really did know his history when he said, “I think Jane Austen lived here,” as we strolled down College Street towards the ochre painted building she lived and died in. Opposite, the monument to the author, seemed to be slowly disappearing under a cloud of ivy. 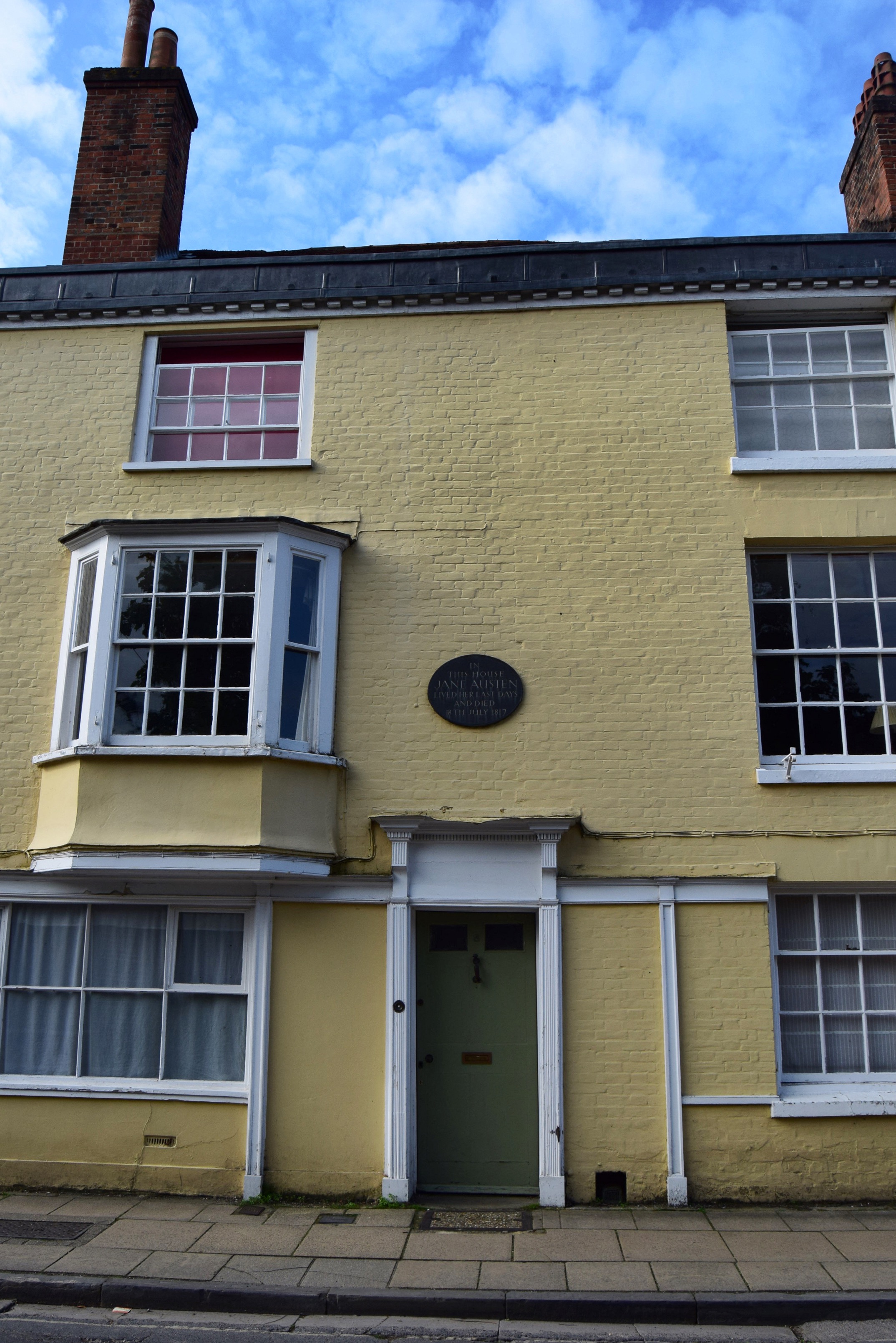 On past Winchester College, with a quick peek through the leaded windows, we went, heading for the river. In the late summer and early autumn of 1819, John Keats lodged in Winchester. No one knows exactly where he stayed but we’d been roughly following his daily walk, a walk that inspired one of his best known poems, To Autumn.

We stopped for a moment to look through the gates of the Bishop of Winchester’s current house. There was a temptation to turn left and head for Wolvesey Castle, the ruins of the palace the medieval bishops called home. It would certainly have appealed to Mitch’s love of history. Instead we turned right. Now we were leaving the historic city behind drawn, like Keats, by the beauty of the water meadows.

Soon the water was burbling beside us, the willows providing puddles of shade. Running to our right was the Lockburn Stream, a medieval culvert built by St Aethelwold, the bishop of Winchester from 962-984. The sparkling water was so clear you could have counted the stones on its bed. It wasn’t always as sweet and clean. It was built as a drainage system to serve the city and cathedral buildings and was, by all accounts, a stinking cesspit. In fact, Lockburn, means dirty water. When William of Wykeham planned the Winchester College building, he demanded the monastery build a grill over the stream where it entered his college grounds and employ a man to ‘catch the offending dung, carcasses and putrid entrails’ that were caught by it.

Looking at it now, it’s hard to imagine this sweet little stream served as Winchester’s main drain until the 1870’s. When Keats walked this way it would still have been used as a drain but, if he knew its dirty little secret or noticed the smell, he didn’t mention it in his letters to his brother and sister in law. Perhaps the world was a smellier place back then and such things went largely unnoticed?

Before long we had the Itchen flowing to our left and we walked on a gravel path between it and the Lockburn Stream. The banks were a mass of wildflowers and seedheads, splashes of purple loosestrife, Queen Anne’s lace and, disappointingly,  Himalayan Balsam. I pointed out the pretty pink flowers to Mitch and explained how the seedheads explode, sending seeds flying off for great distances. Pretty it may be, and beloved by the bees, but it’s an invasive menace. Soon, I suppose, all the other wildflowers will be crowded out and the banks here will be nothing but balsam.

The Itchen meandered across the watermeadow, sometimes right beside us, others distant enough to be hidden from sight, while our path stuck close to the stream as it headed for St Cross Hospital. We passed the tantalising bridge to the college playing fields and its locked gate seemed to taunt me. Was it there when Keats walked this way and, if so, did he long to cross it even though he knew there was nothing of real interest on the other side? Probably not. If there was a bridge it would be long rotted now and I doubt anyone else has my unreasonable urge to cross bridges for nothing more than the view from the middle.

The stream curves slightly to the left here and there are handy seats beneath the trees. We had no time for sitting though. With just over two hours before the runners would return we had to keep moving. Besides, we were coming to the end of the first part of our walk.

Not long after we passed the shady seats, we reached the end of the trail, at least this first part of it. We’d come to Garnier Road and the breathtakingly beautiful Meadow View Cottage with its flint clad walls. If we turned left here we’d soon come to St Catherine’s Hill and the Itchen Navigation. The thought of beautiful views and the interesting story of Plague Pits Valley was tempting despite the climb involved.  Then again, if we carried on in the poet’s footsteps, we’d come to St Cross Hospital. Time for a little dithering…

8 thoughts on “In poet’s footsteps”