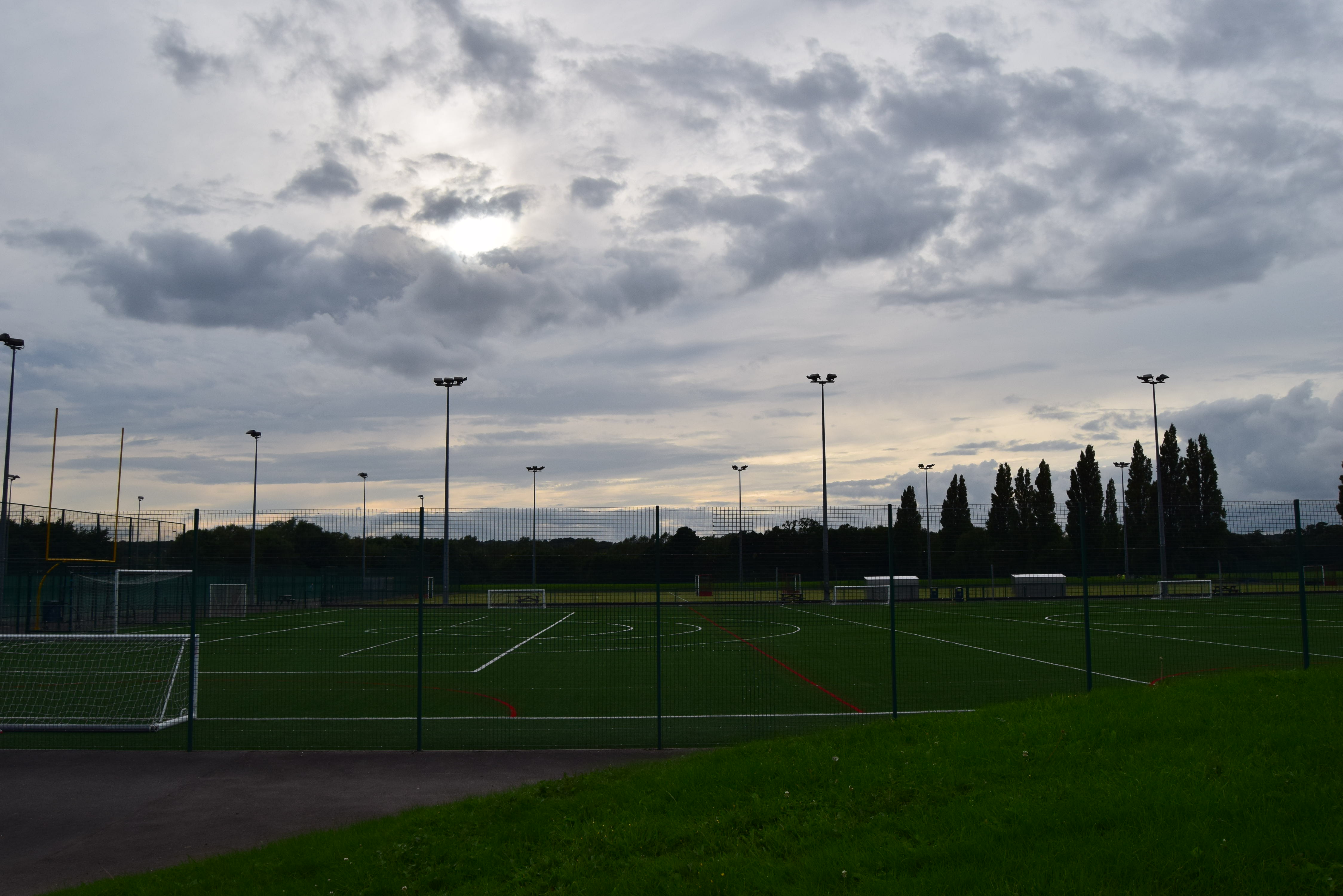 The final RR10 of the season was organised by Eastleigh running club. The original plan had been to hold it at Marwell, just like last year, but there was an issue with the venue and it ended up being postponed. In the end tonight’s race was held at a completely new venue, the University Sports Ground on Wide Lane. This is a place I’ve walked past many, many times, on my way to Winchester, Eastleigh, or just Lakeside which is actually the next set of fields along the road. Because it’s not open to the public though, I’ve never been inside.

The sun was hiding behind the clouds as we left the gravelly car park by the road and walked around the outside of the buildings looking for the start. For the runners this was probably a bonus but it left me wishing I’d put on another jumper before I left home. As we came around the corner we spotted Big Dave standing with a group of Eastleigh runners. Dave organises the pacers for events like the Southampton Marathon and the Winchester Half Marathon so we stopped for a chat.

Dave and the other assembled Eastleigh runners who were acting as marshals weren’t quite sure where the start was. This was a bit of a worry but, eventually, another Eastleigh runner came over and told us we needed to go through the underpass into another field. Walking along the packed gravel track I was trying to work out where we were in relation to the places I usually walk but I couldn’t quite get my bearings. 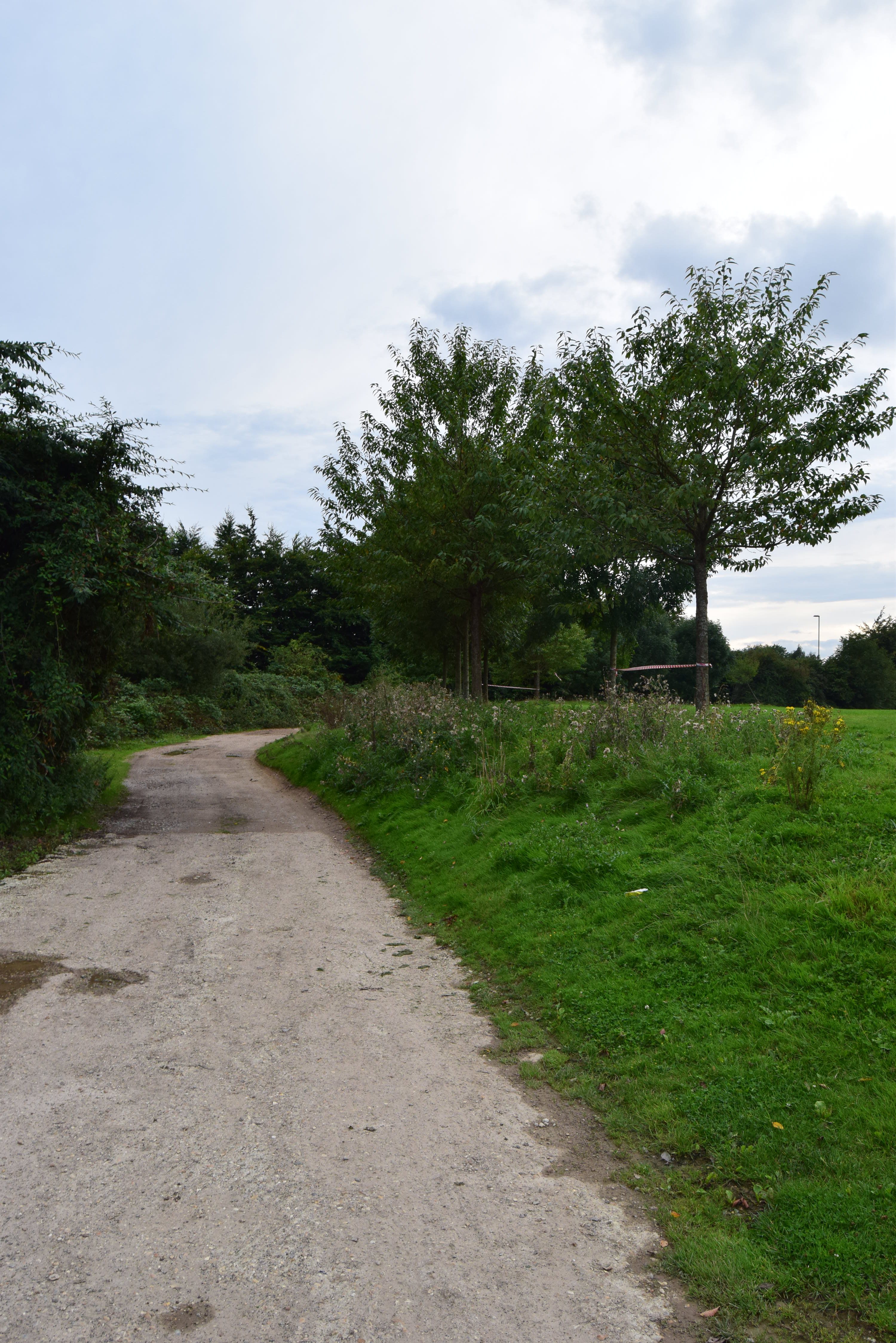 The second field was large and empty apart from a wooden shelter, some toilets and a few scattered goal posts. Obviously the university use it for football games. While everyone was standing around chatting and waiting for the tent and flag to arrive I looked around. In the far distance I could see what looked like the sliproad for the motorway. Beyond that would be Monks Brook Meadows I guessed. 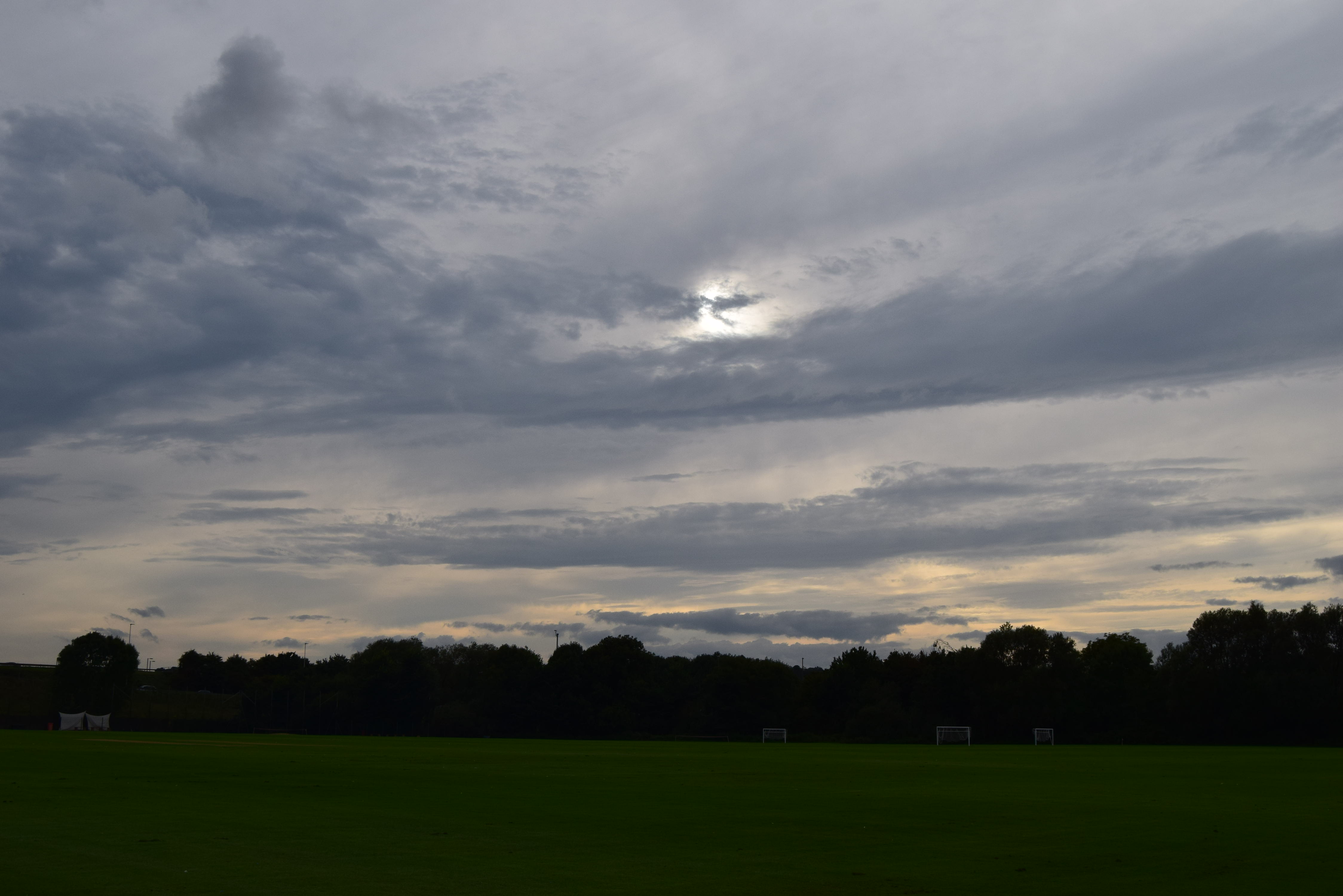 Then I noticed something white glinting between the trees a little to the left of the slip road. A bit of squinting and a few steps towards it and I realised this was the Spitfire on the roundabout by the airport. This was a reminder that we were in spitting distance of the spot where the first Spitfire took its test flight back in 1936.  Of course I had to walk across the field to see if I could get a photo. 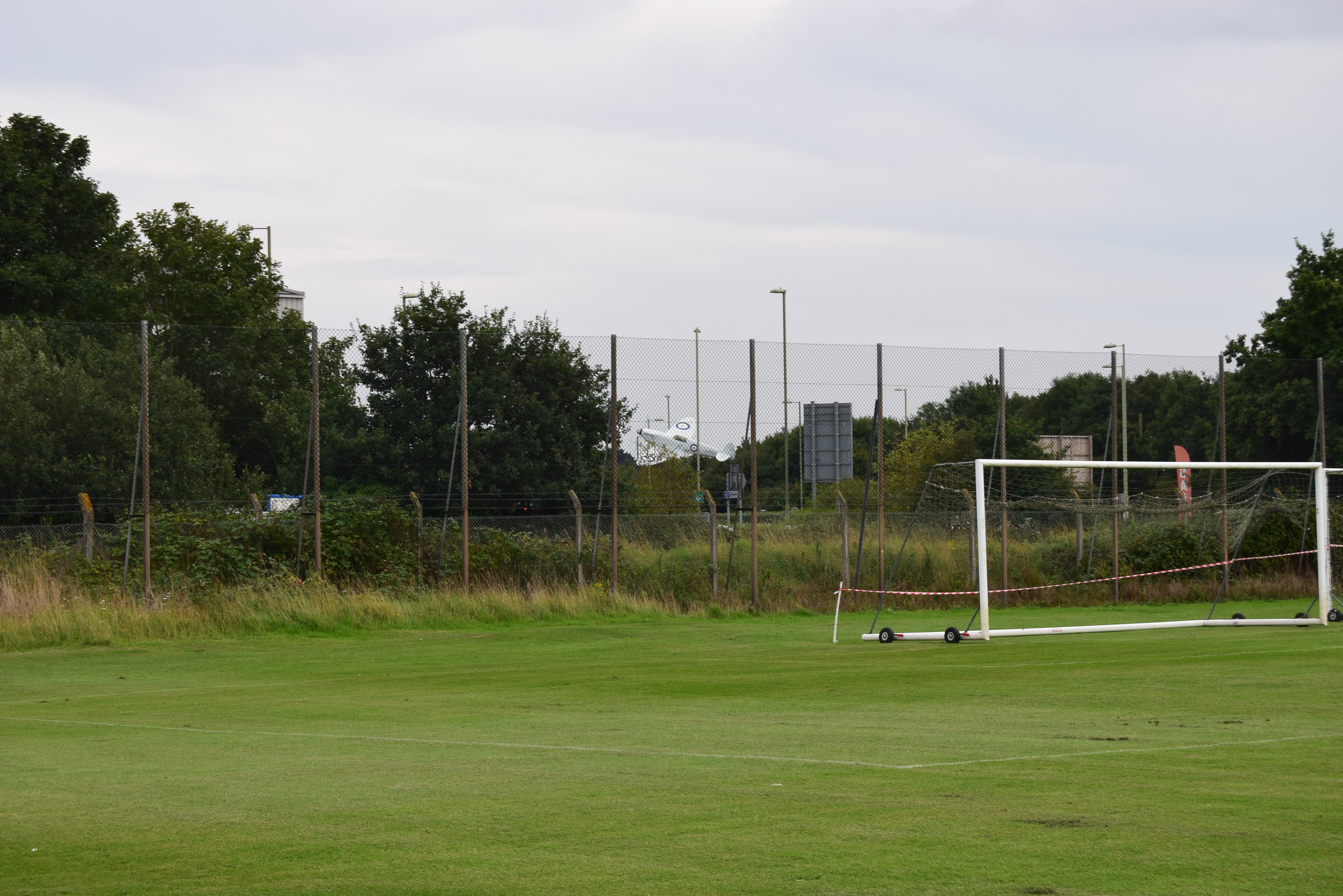 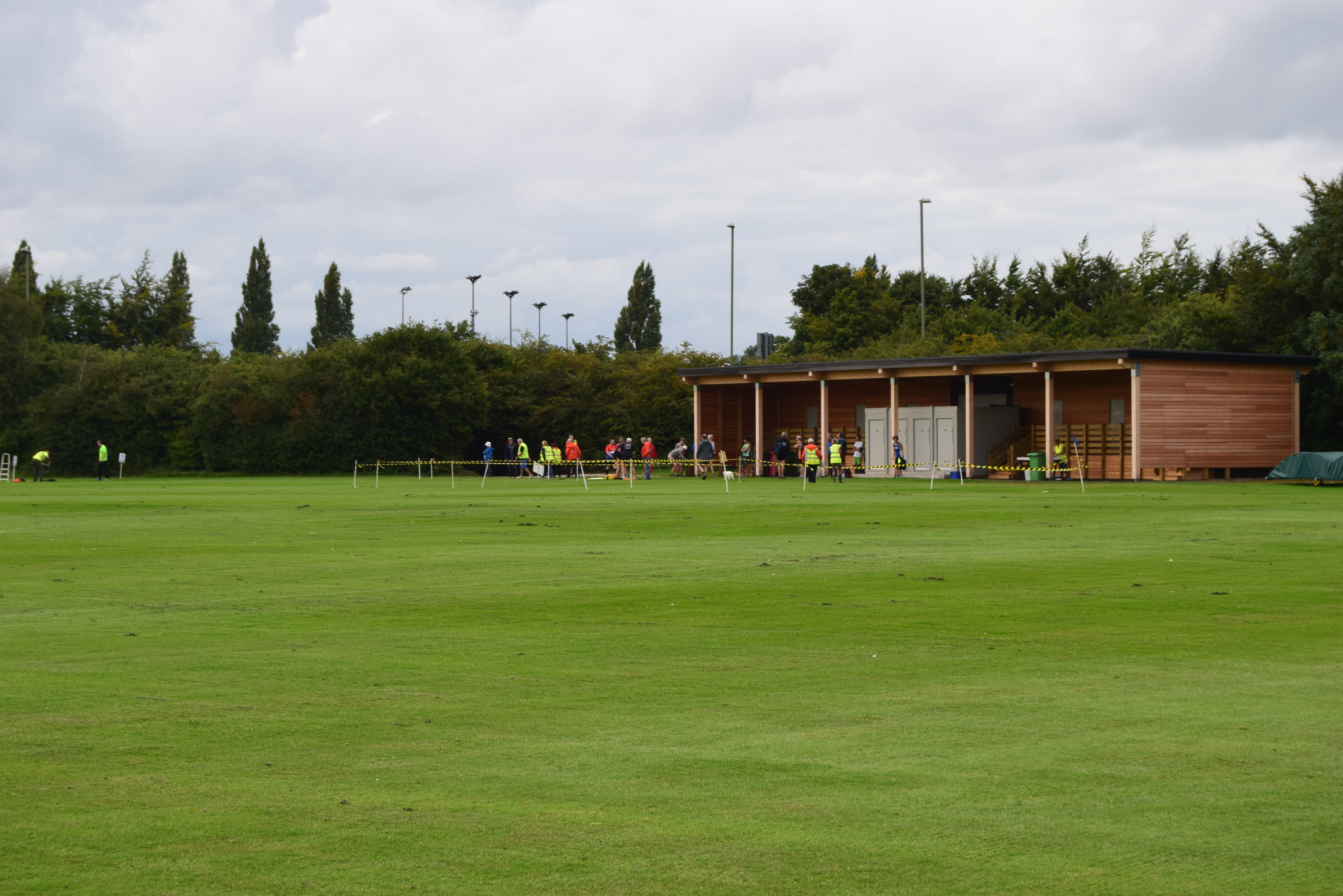 There seemed to be a lot of waiting around, perhaps an illusion because I was feeling the cold, but eventually, they were off. This was not going to be the usual cross country race, all muddy trails and random obstacles.  Instead it was laps of the field we were standing on and the field we had passed through to get there. Most of the runners felt it was a touch uninspiring but, on the plus side, it was flat which would likely mean good finish times. 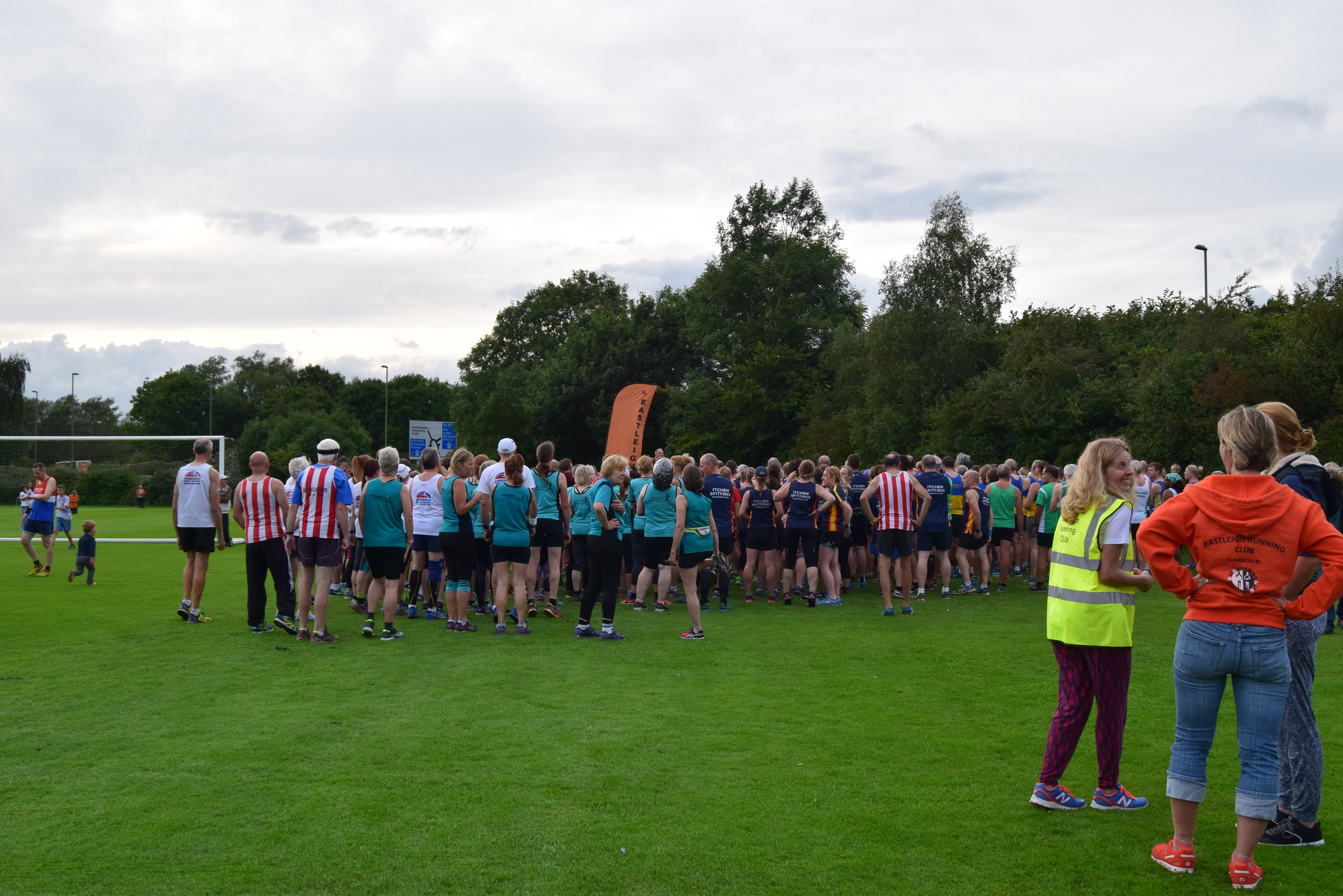 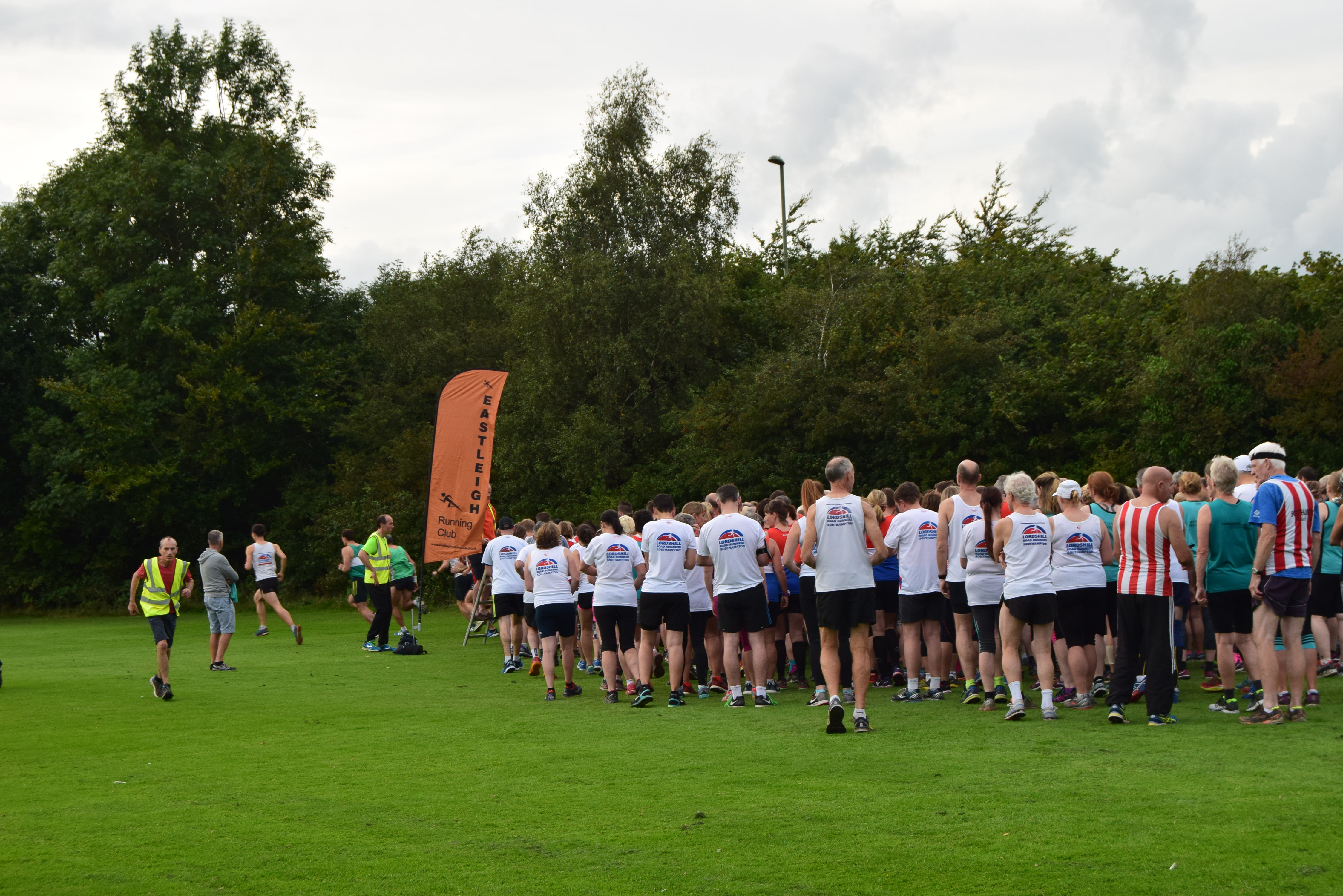 For spectators like me, the course was a bonus. For half of the race I could stand in one spot and watch everyone running round, something it’s not possible to do for any other RR10. When they began to come past at the end of the first lap I got the camera out and started snapping away.

Commando came by looking far more relaxed than I’ve seen him in any of the previous RR10’s. No doubt this was down to the total lack of hills, a stark contrast to the last race at Hursley which seemed to be nothing but hills. He was concentrating so hard on running he didn’t notice me though and, pretty soon he’d disappeared into the next field. 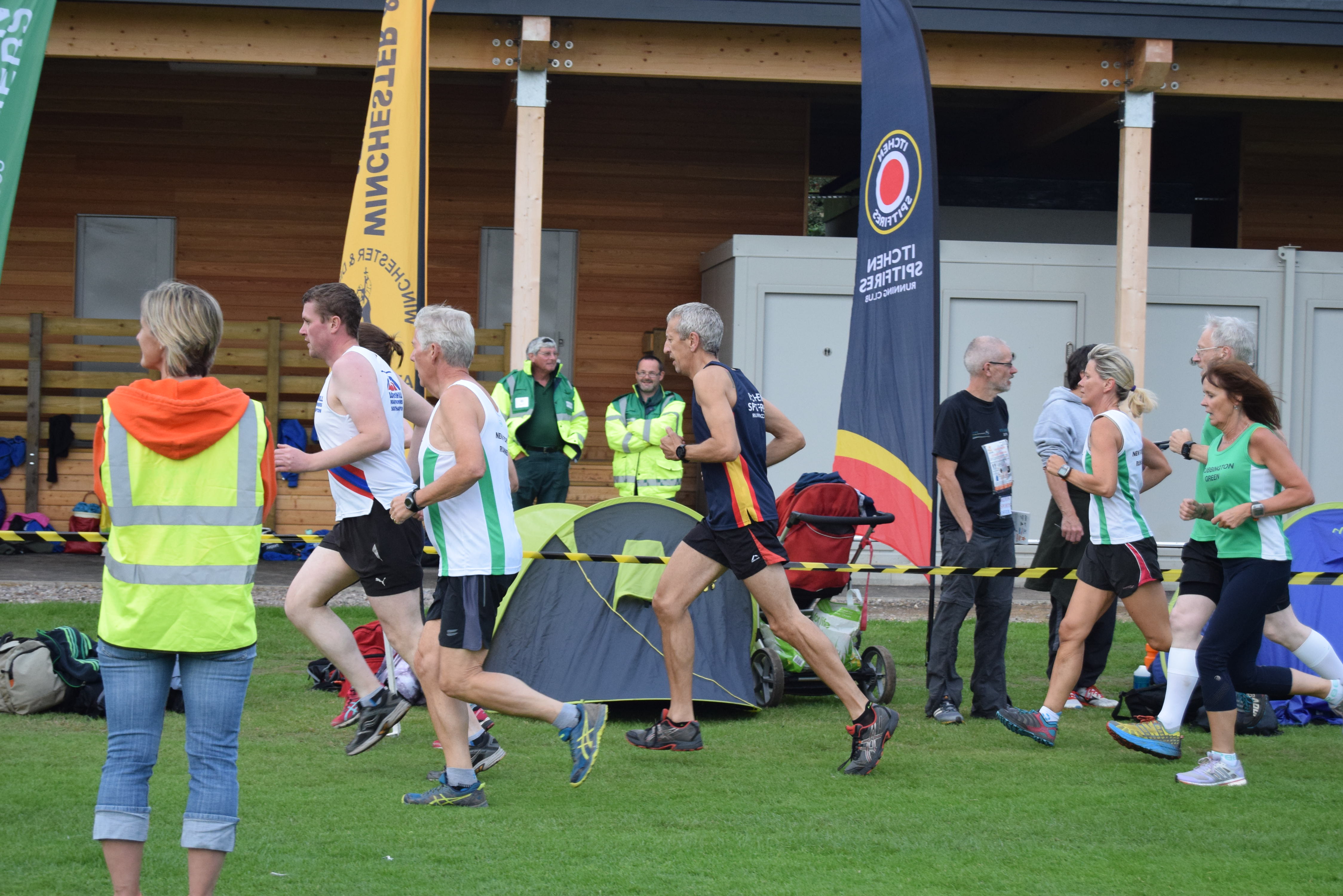 Once he’d gone I carried on with my photo taking until the last of the runners had zoomed past. Soon all the runners were in the next field and the cheer team were standing around chatting and waiting for them to reappear.
“How many laps are they doing?” I asked one of the other cheerers.
“Four of each field I think,” she said with a shrug.
This was the point when I realised I’d better stop taking photos until the last lap or I was going to end up with a ridiculous number to go through.

So, instead of taking more photos, I stood with all the other cheerers and cheered as the runners came past again and again. Every so often a plane took off or landed, reminding us how close to the airport we were. When it came to the final lap I got my camera back out and tried my best to capture everyone’s sprint finishes. Beside me, the other cheerer was shouting so loud I was fairly sure people in the centre of Eastleigh were wondering what was going on. 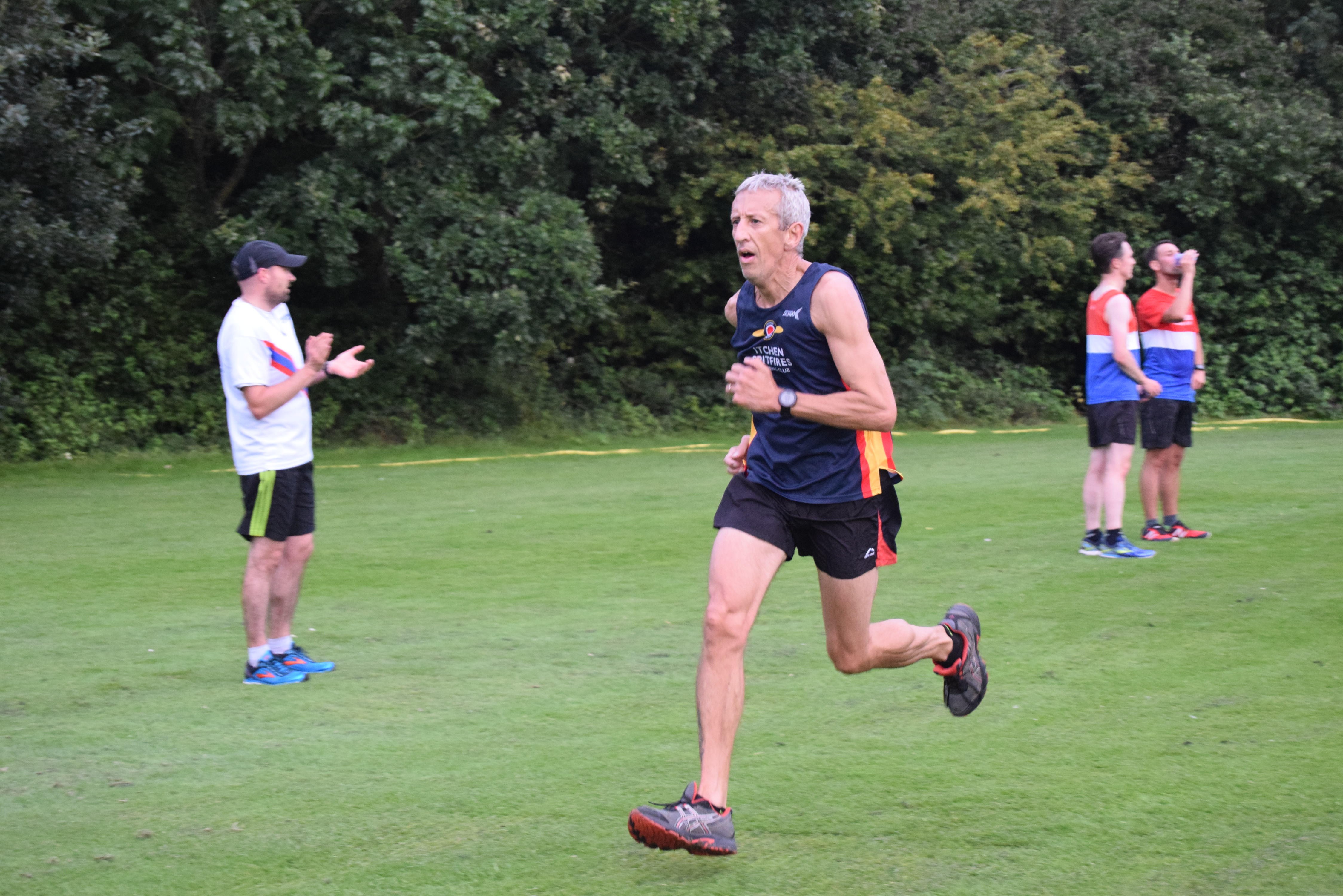 The volume of the cheering seemed to spur everyone on and there were some spectacular sprints and a lot of last minute places gained or lost in the final yards. Towards the end I thought my cheerleading friend was going to lose her voice, she was getting more and more croaky but somehow she still managed to be as loud as ever.

As the last runners were heading for the line and Paul and Kim were busily collecting the finish tickets Kylie arrived. She’s missed almost all the RR10’s this year as she’s been working on various cruise ships helping with a new computer system. Tonight she flew back for a brief stay in the UK. In fact her plane was one of the ones we saw coming in to land during the race. It was great to see her. Even better that she took all the finish tickets and scores away with her and saved me the job of going through them all when I got home. 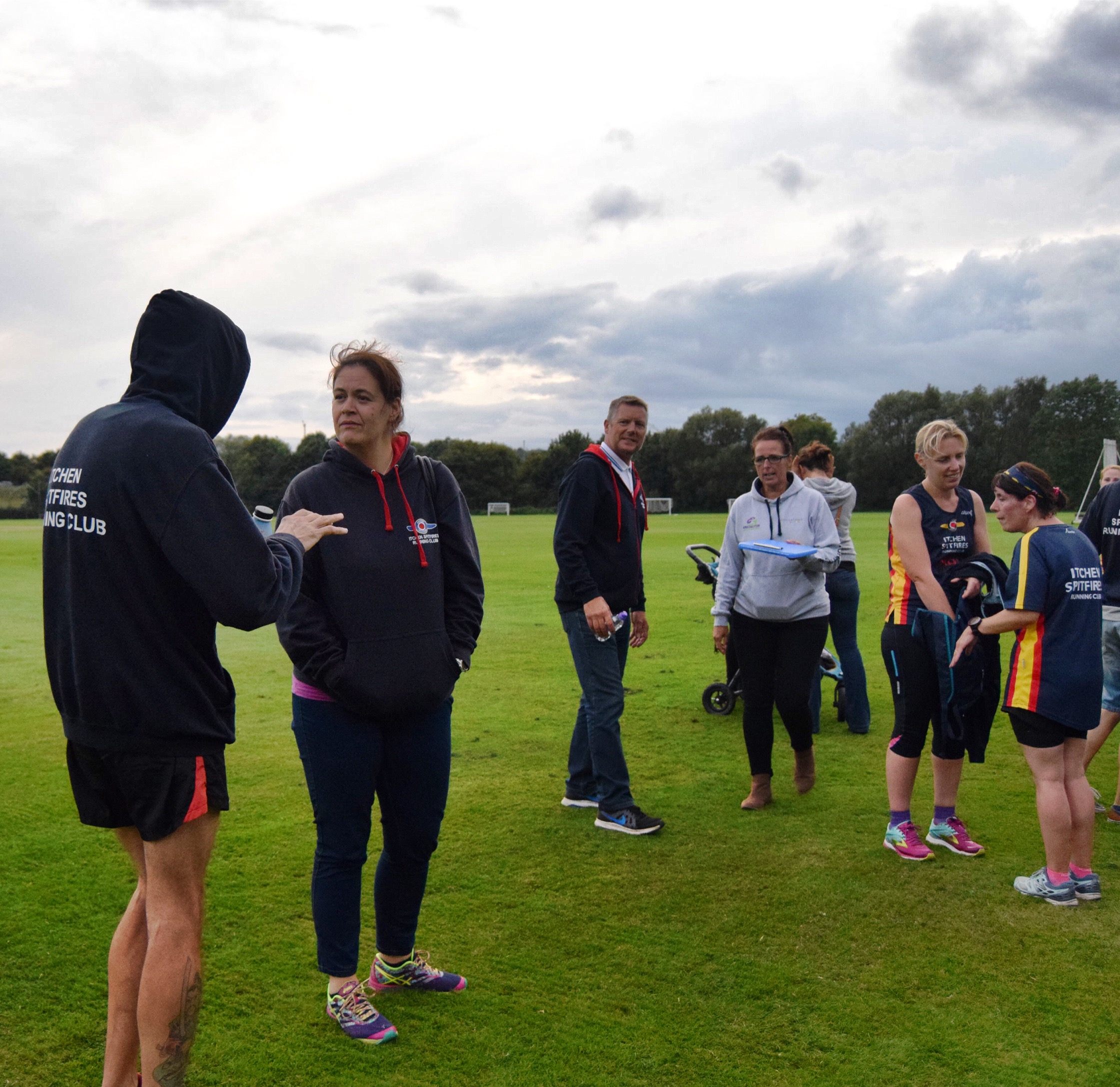 So the RR10’s are now officially over. Wednesday evenings will never be the same, at least not until next year. In the meantime, we have CC6 Sundays to look forward to soon.