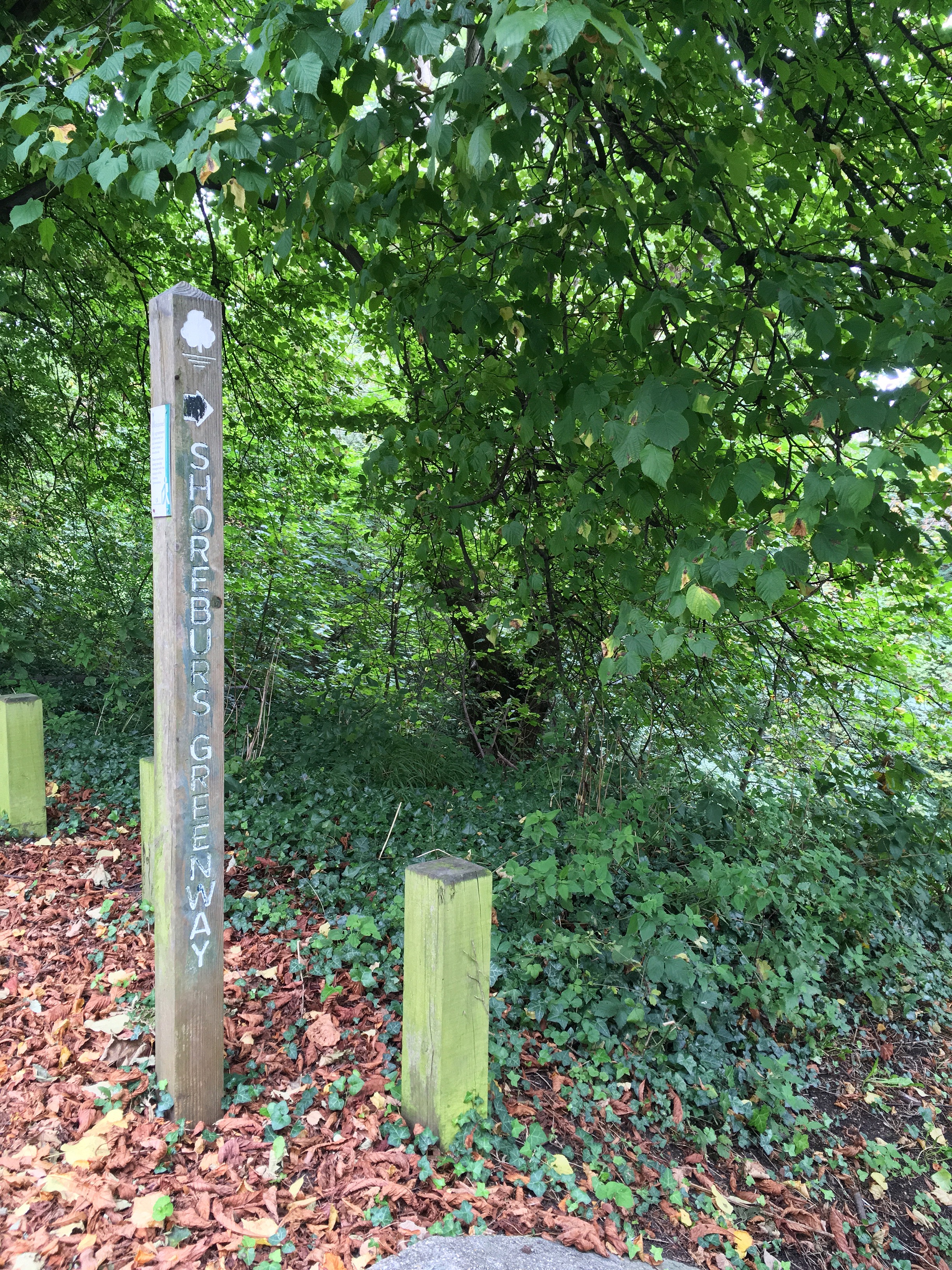 We left the sea and the tall flats behind and cut through the buildings to Archery Road. At this stage my plans were vague. Maybe we’d walk back towards Woolston and wind our way through the streets there. Maybe we’d head along Swift Road or Weston Lane towards Sholing and Millers Pond. Then again, we could walk through the woods, if they weren’t too muddy.

At the roundabout at the bottom of Weston Lane we made a snap descion and headed along Archery Road, still unsure where we’d go next. Soon we’d passed the houses and reached the edge of the ribbon of woodland that runs from the shore all the way to Bursledon Road. This is Shoreburs Greenway, a three and a half mile trail I’ve walked in full and in segments many times. The name, as far as I can tell is an amalgamation of Weston Shore and Bursledon Road.

Usually a woodland trail would be my first choice of route but this one is often very muddy, especially as it runs through the valley of Archery Woods. When I set out I’d been expecting to walk mostly on pavements and I was wearing my walking sandals, not my boots. CJ was far keener on the woods than the road and, when we looked down the steep steps at the start of the trail, it didn’t look too bad. Perhaps if we took the higher trail… 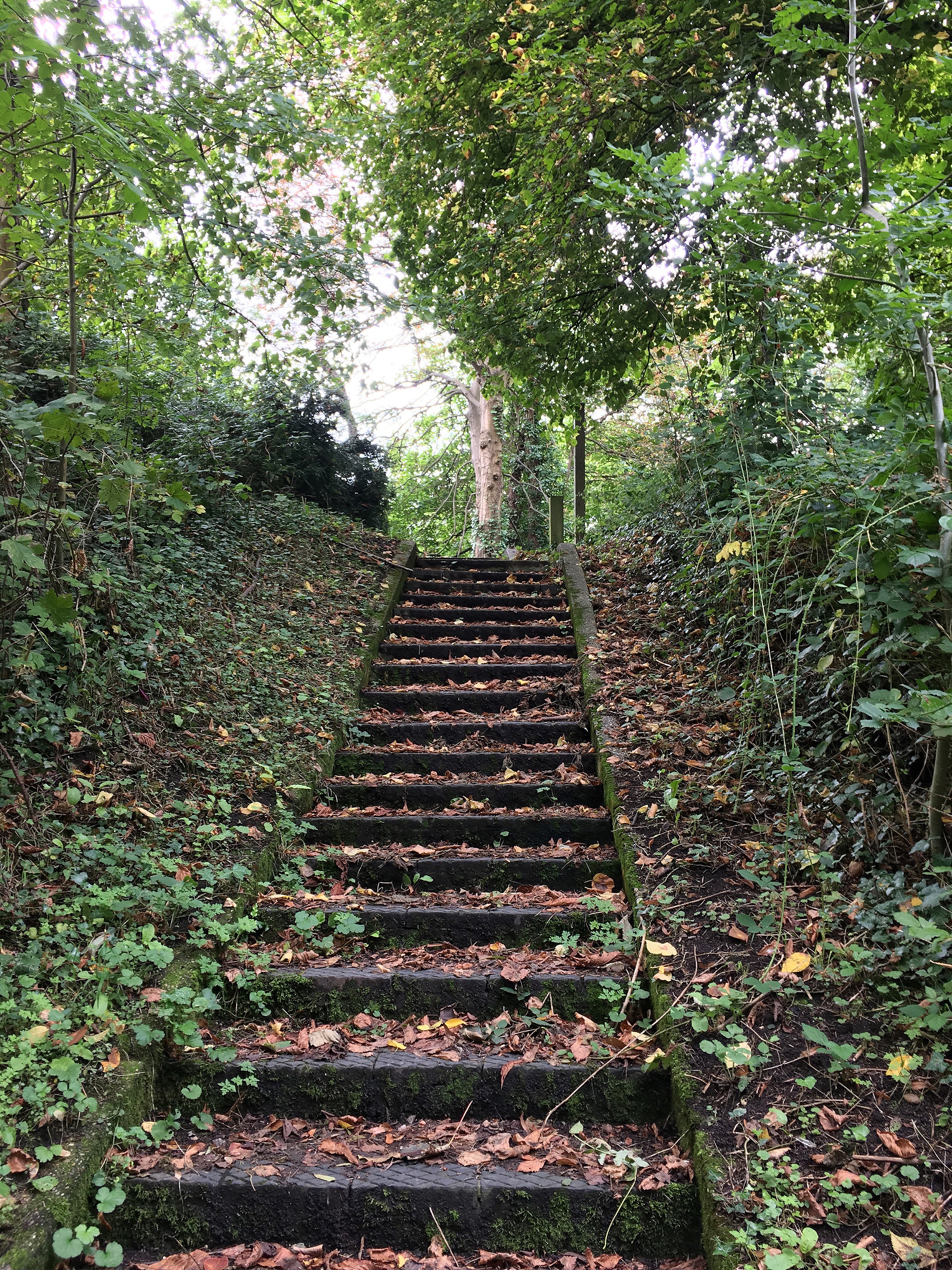 Once the Archery woods were part of the Weston Grove Estate, belonging to the Chamberlayne family. In the 1800’s various parts were sold off and two other estates were created, Barnfield and Mayfield. The names live on in street names today, although all the big houses have long gone. Whether these fields and woods were ever used for Archery is a mystery, but the name suggests they probably were. At first the path skirted the edge of the grassy field, although I was fairly sure it would lead us down to the boggy trail beside the stream by and by. On the margin of the field a massive broken oak branch, the size of a small tree, blocked our way. It had snapped but was caught amongst the other branches so hadn’t completely fallen. It was possible to get through but probably not wise to hang around too long beneath it. Even so, CJ stopped to take photos, Sooner or later gravity will win the battle and the branch will fall. It wouldn’t be a good thing to be underneath at the time. 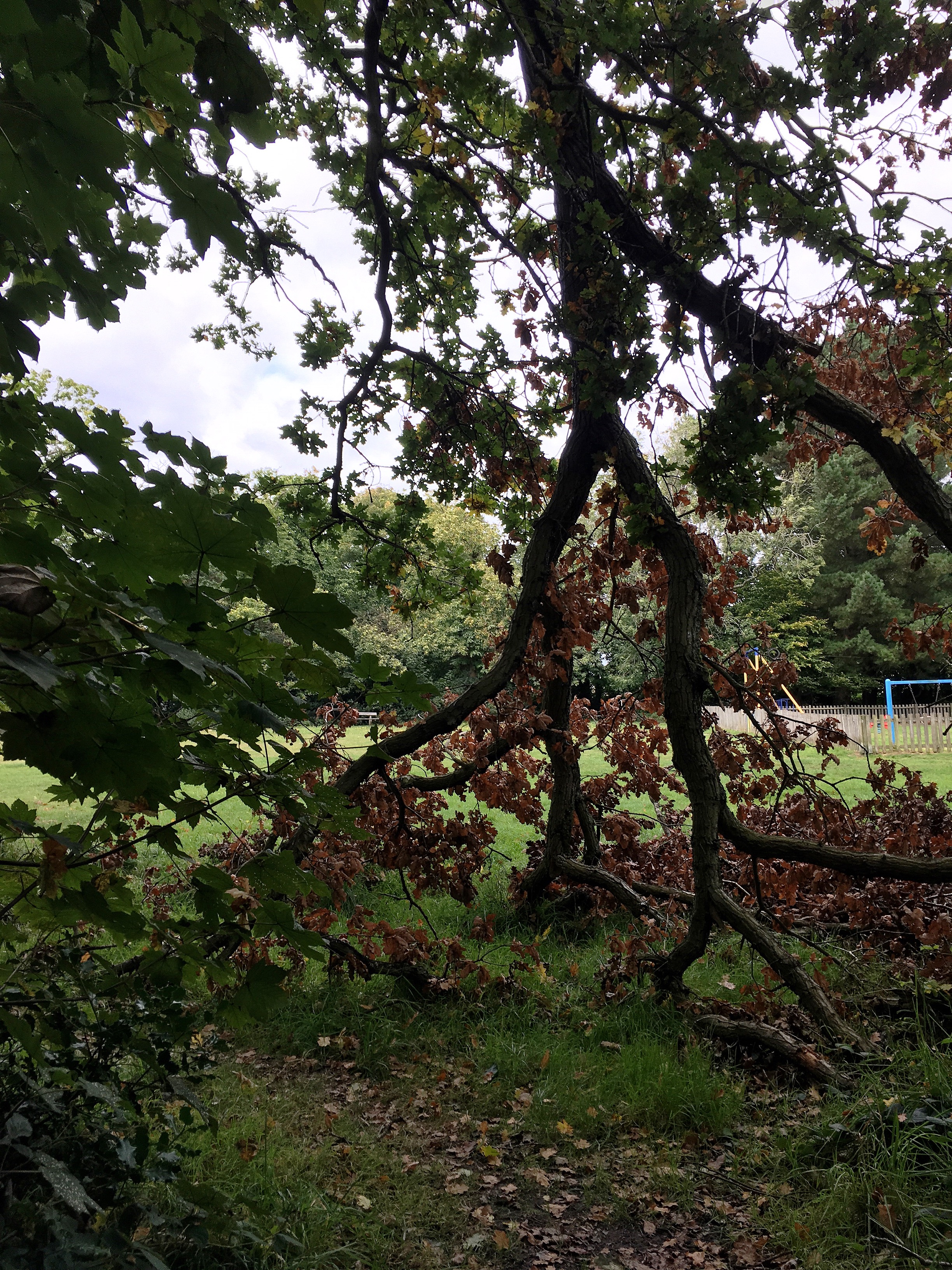 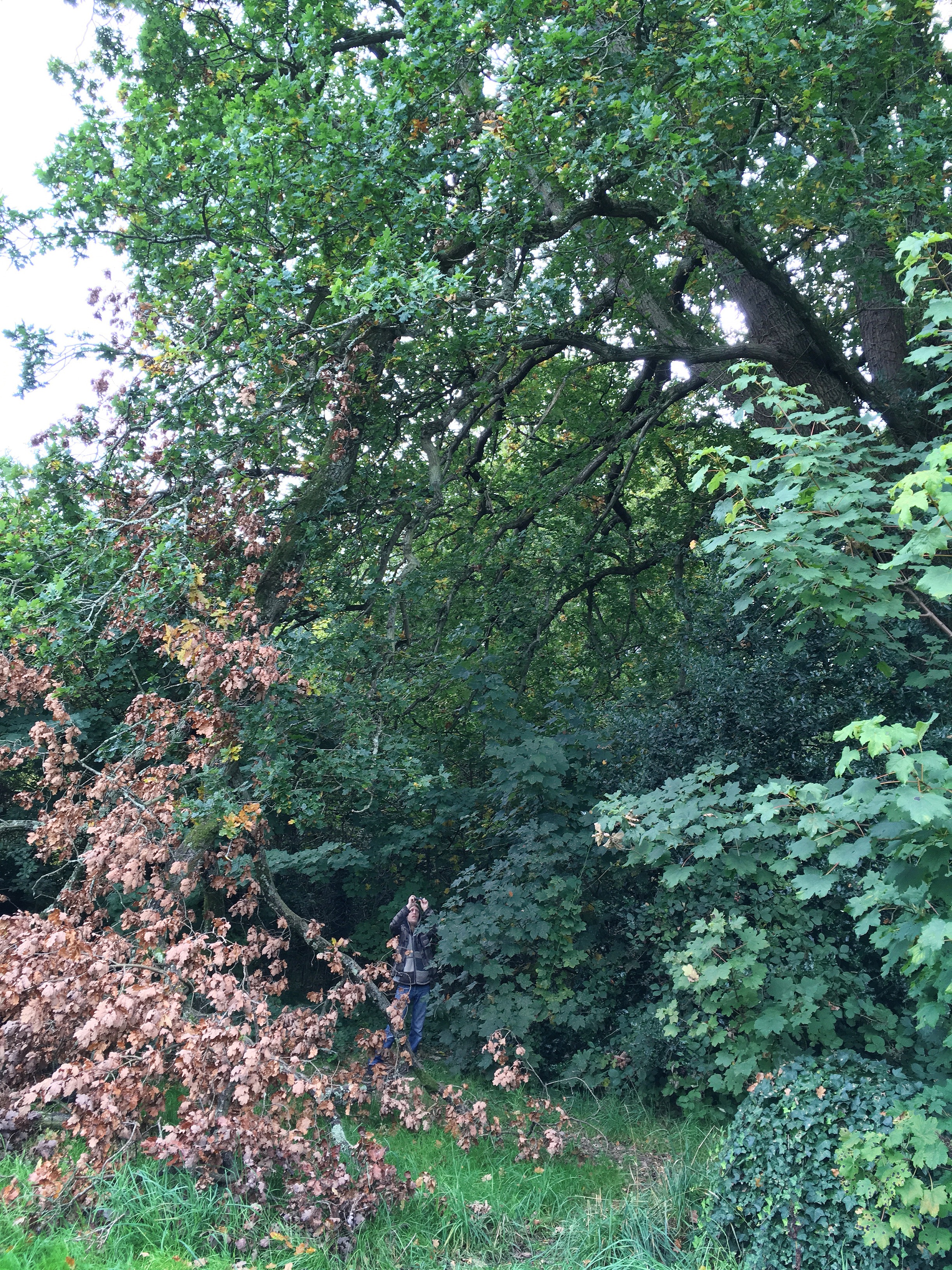 Usually, when I walk this route I wear stout boots and take the low path beside the unnamed stream running down from Millers Pond. The stream actually runs right through the greenway, although in places it is culverted and isn’t always visible from the trail. Here it marks the boundary between Weston and Woolston and the higher ground of the Hampshire Basin on the east of the city drains down into it and then into Southampton Water. It is always a muddy walk, even in mid summer. Once or twice I’ve walked parts of the trail we were on now, along the edge of the field. Being on higher ground it is firmer underfoot but I wasn’t entirely sure it ran all the way to the bridge that would take us up into Mayfield Park. There was only one way to find out and, if things got too bad, we could turn back or climb one of the side trails back to the road, probably… 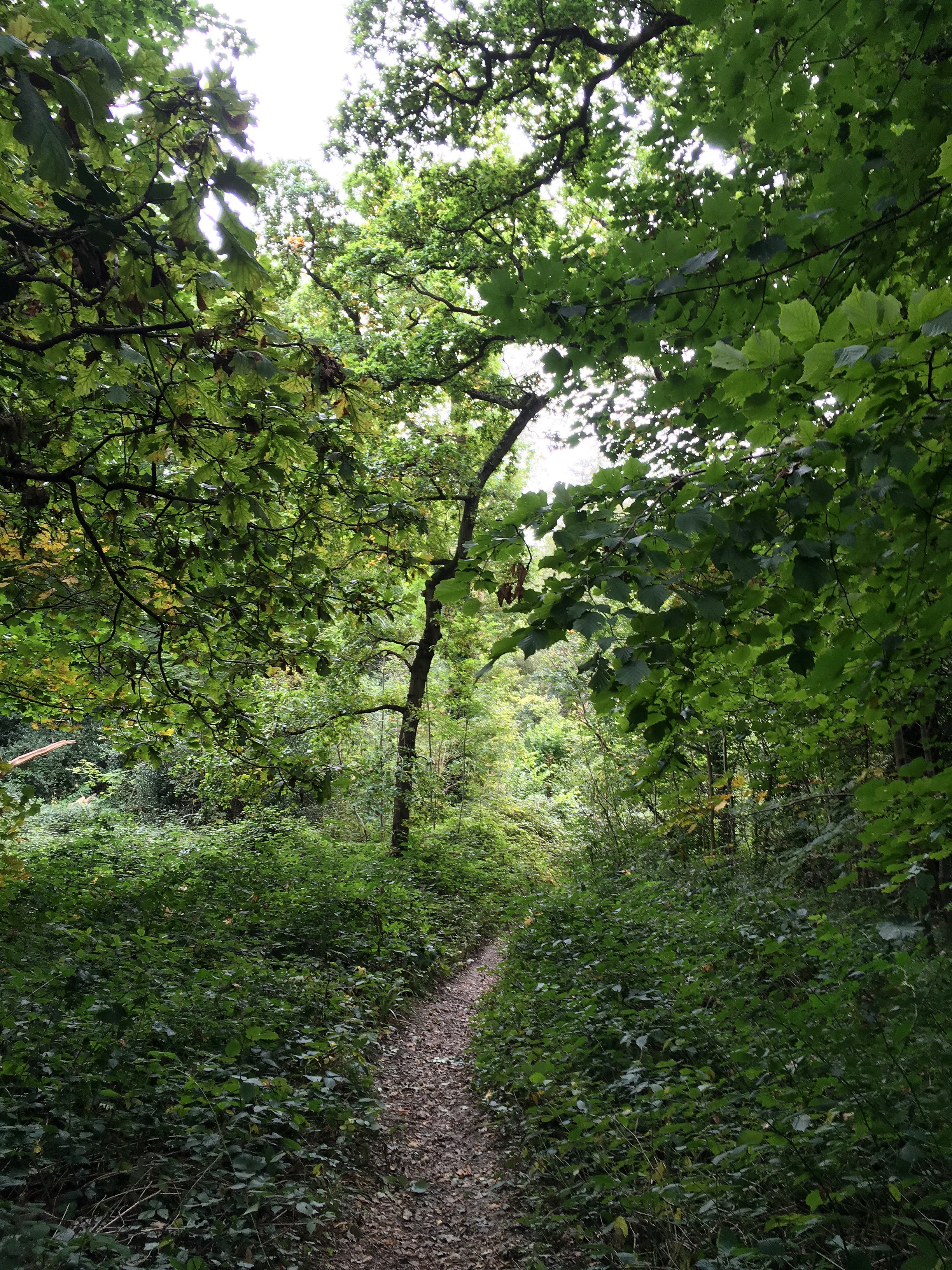 Our path soon began to lead us downwards, just as I’d thought it would. Ending up at the bottom of the valley seemed inevitable. Soon we came upon one of the long humps of concrete that emerge from the muddy earth here and there in this part of the wood. Possibly they’re drains, although I’ve never been sure of their exact purpose. One of the small rills that run down the steep bank all along here ran across our path, collecting as a puddle in a bowl it had worn before trickling over the edge and continuing downwards. Luckily the concrete made it easy enough to cross. 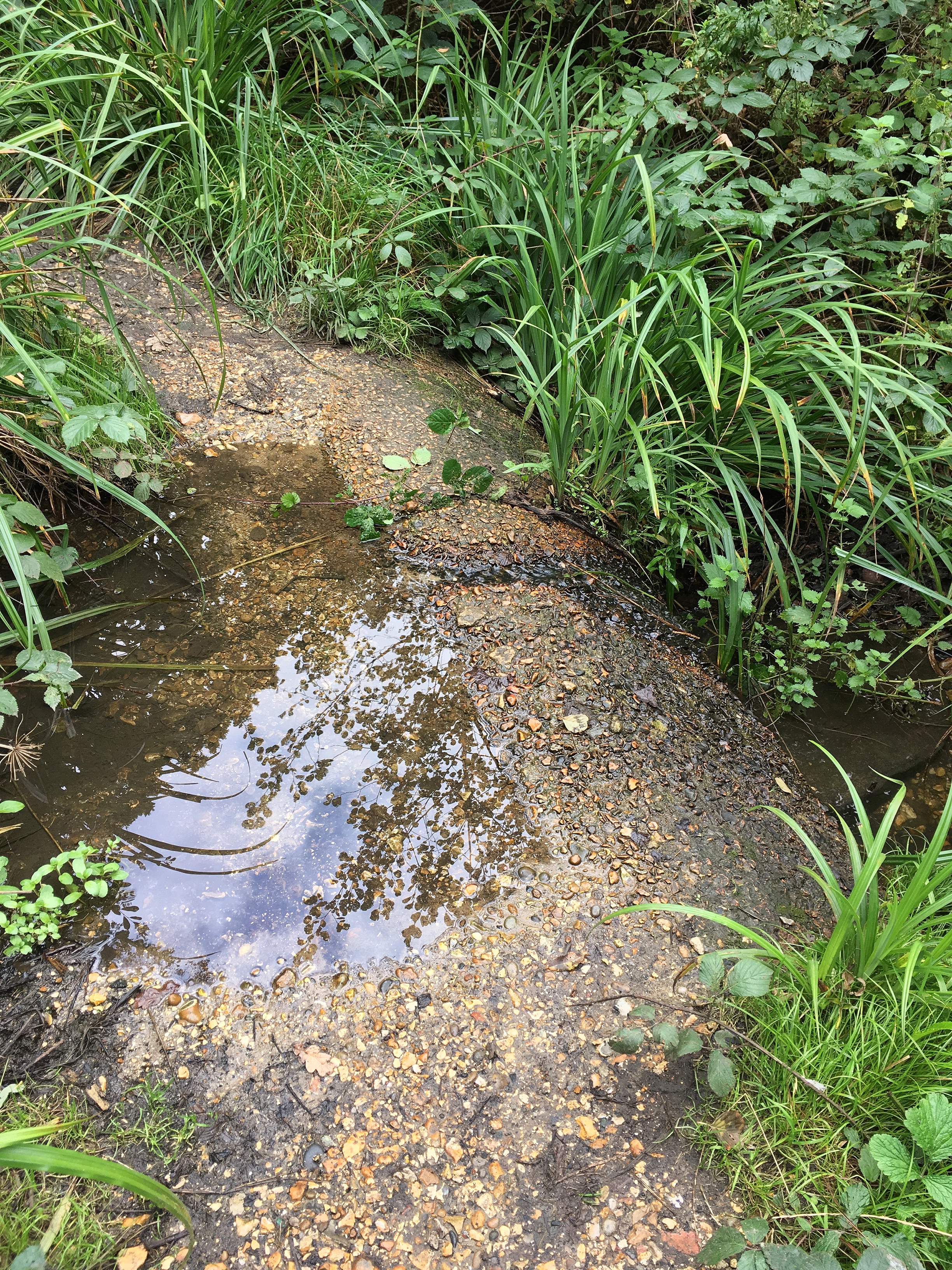 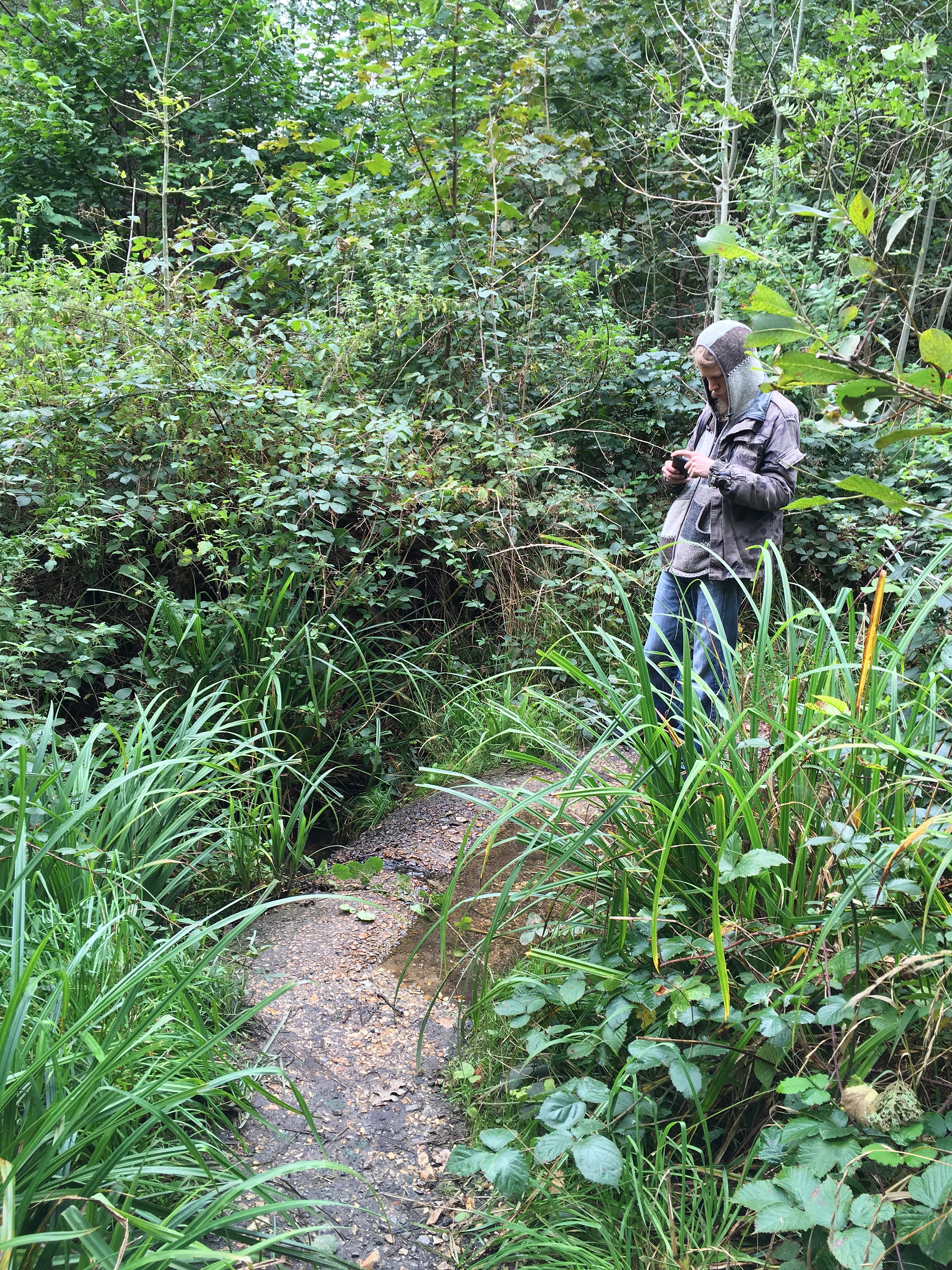 A little later we came to a fork in the trail marked by a large tree trunk with an arched rift at the bottom between the roots. Trees like this always make me smile, they look so much like hidden doorways I half imagine fairies living inside the tree. One path led upwards, the other down. A quick exploration of the upward route told me it curled back towards the field where we’d started. Tempting as it was to take it, we decided to keep pressing forwards. 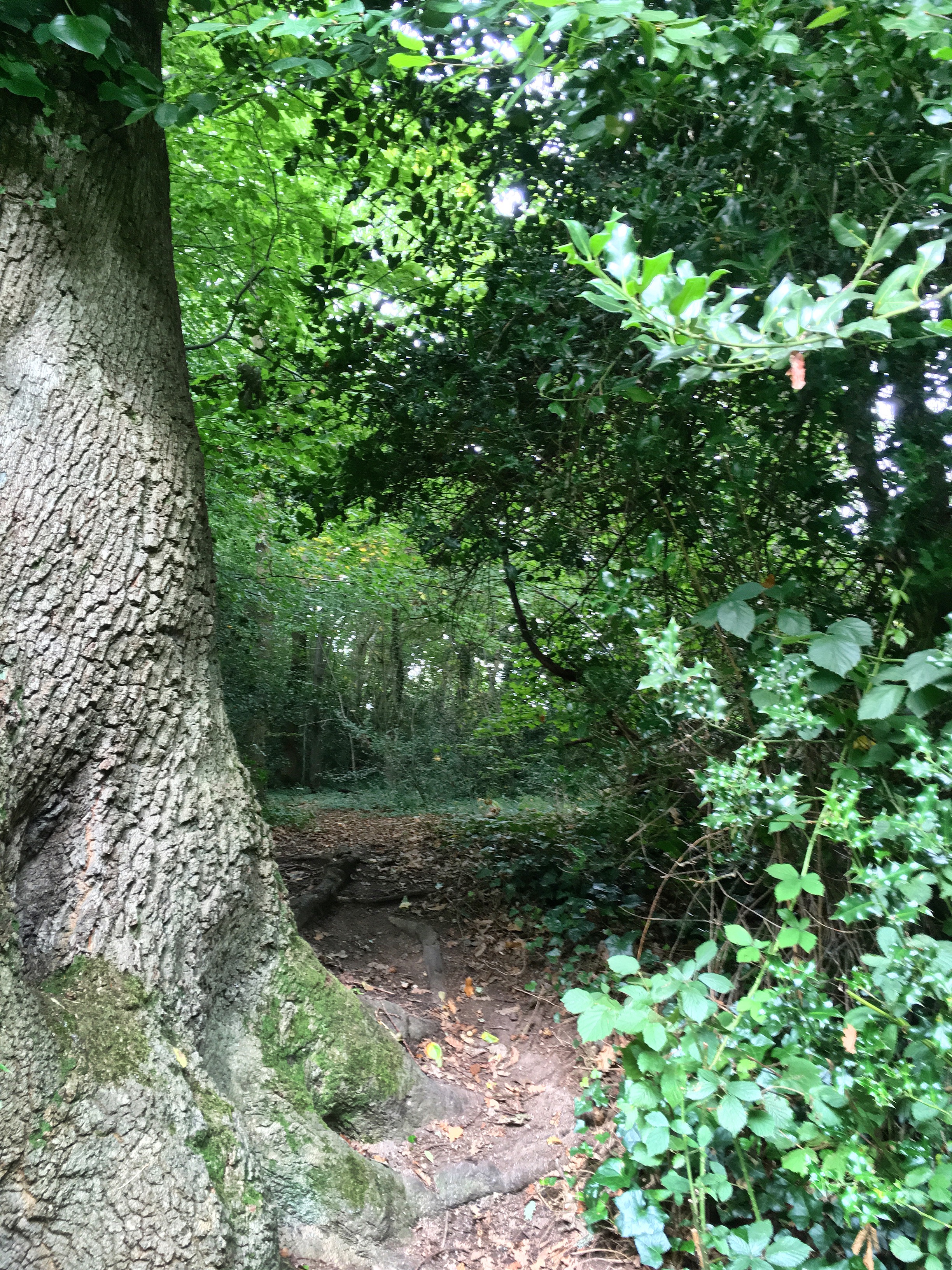 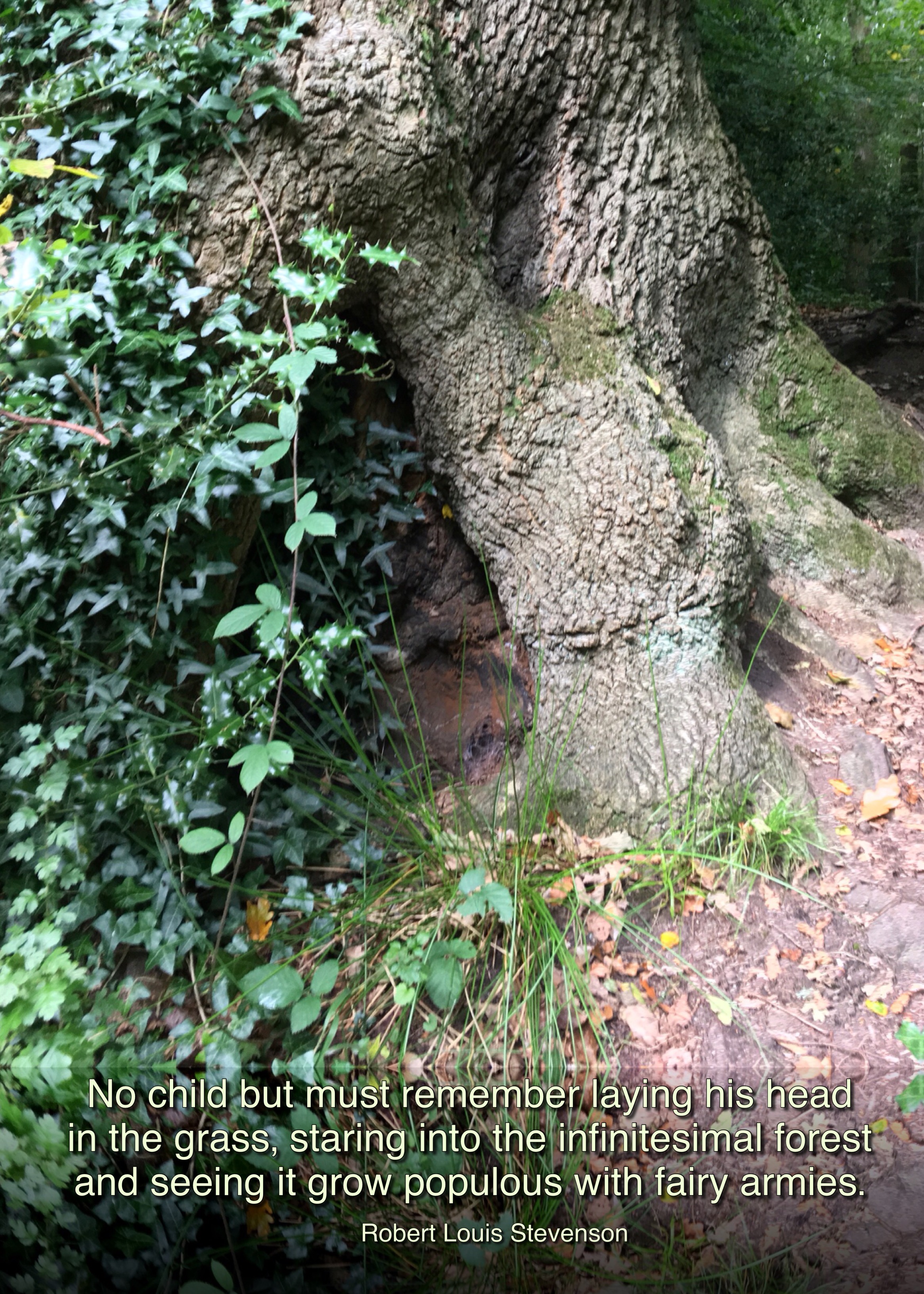 Although there are oaks, maples and even the odd pine here, this is mostly beech wood, one of the most extensive areas of beech wood in the city. The trees cast a deep shade so little grows beneath them. There are many fallen trees here too, probably because the boggy ground is hard for their roots to cling to. 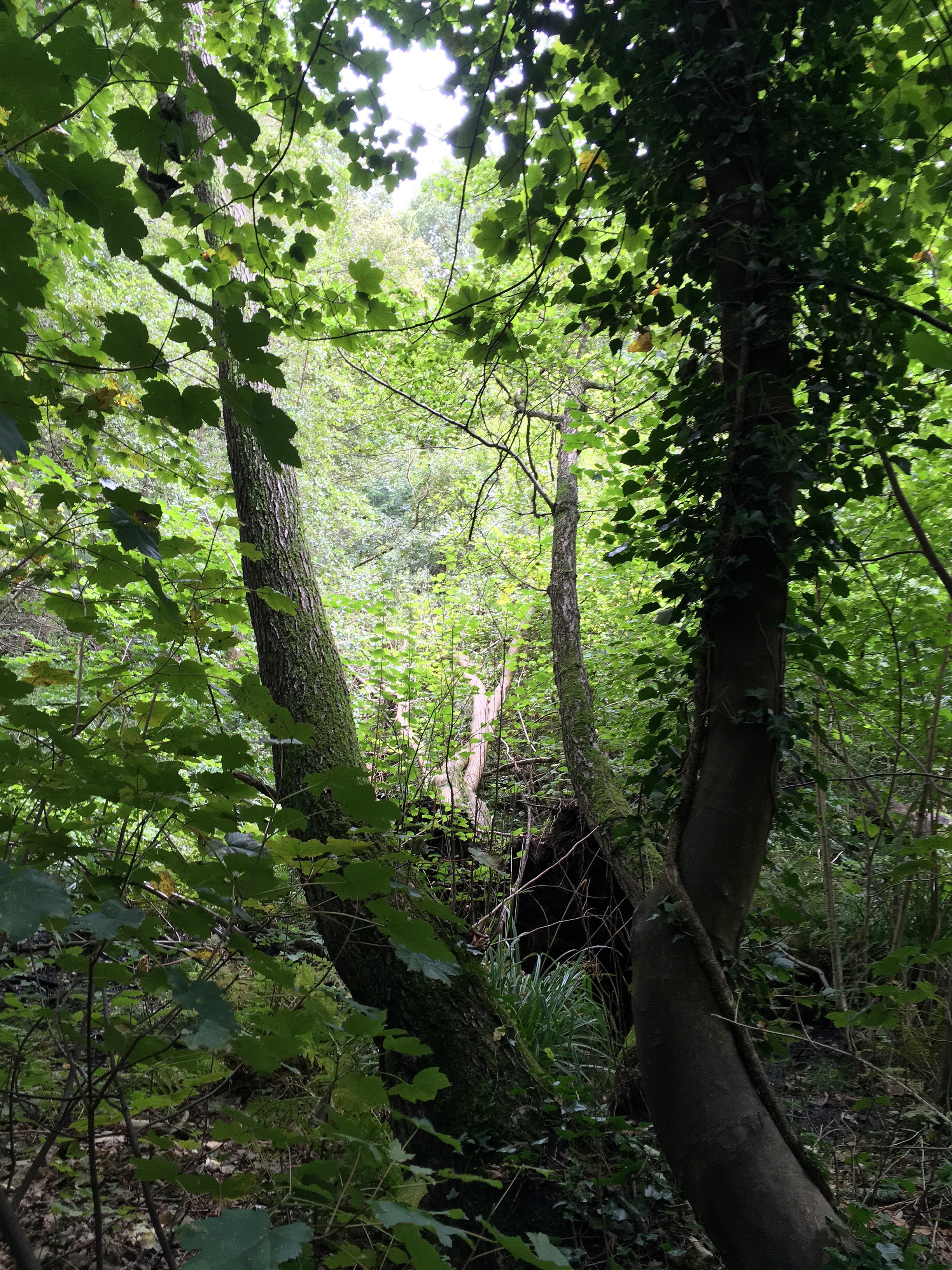 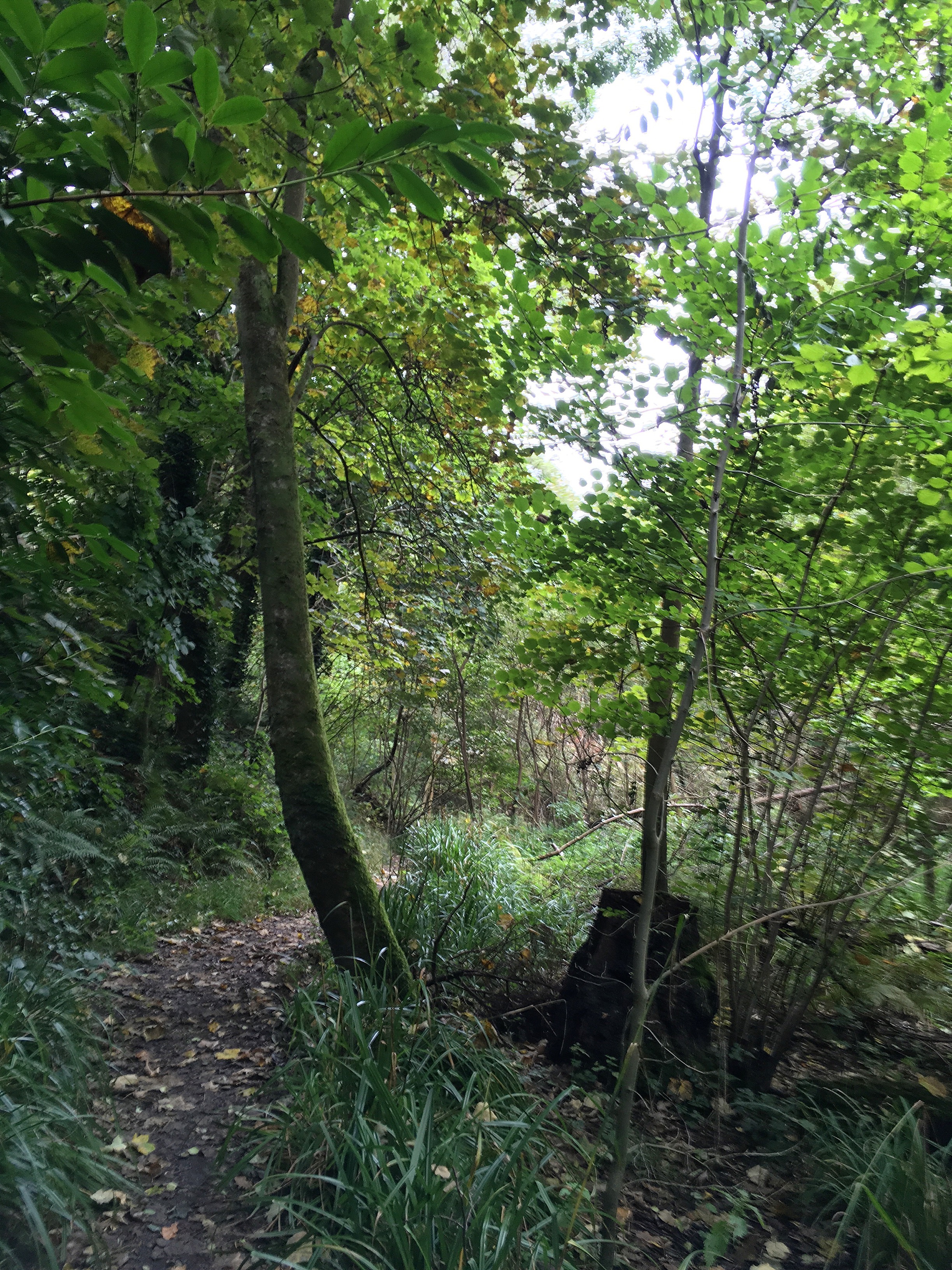 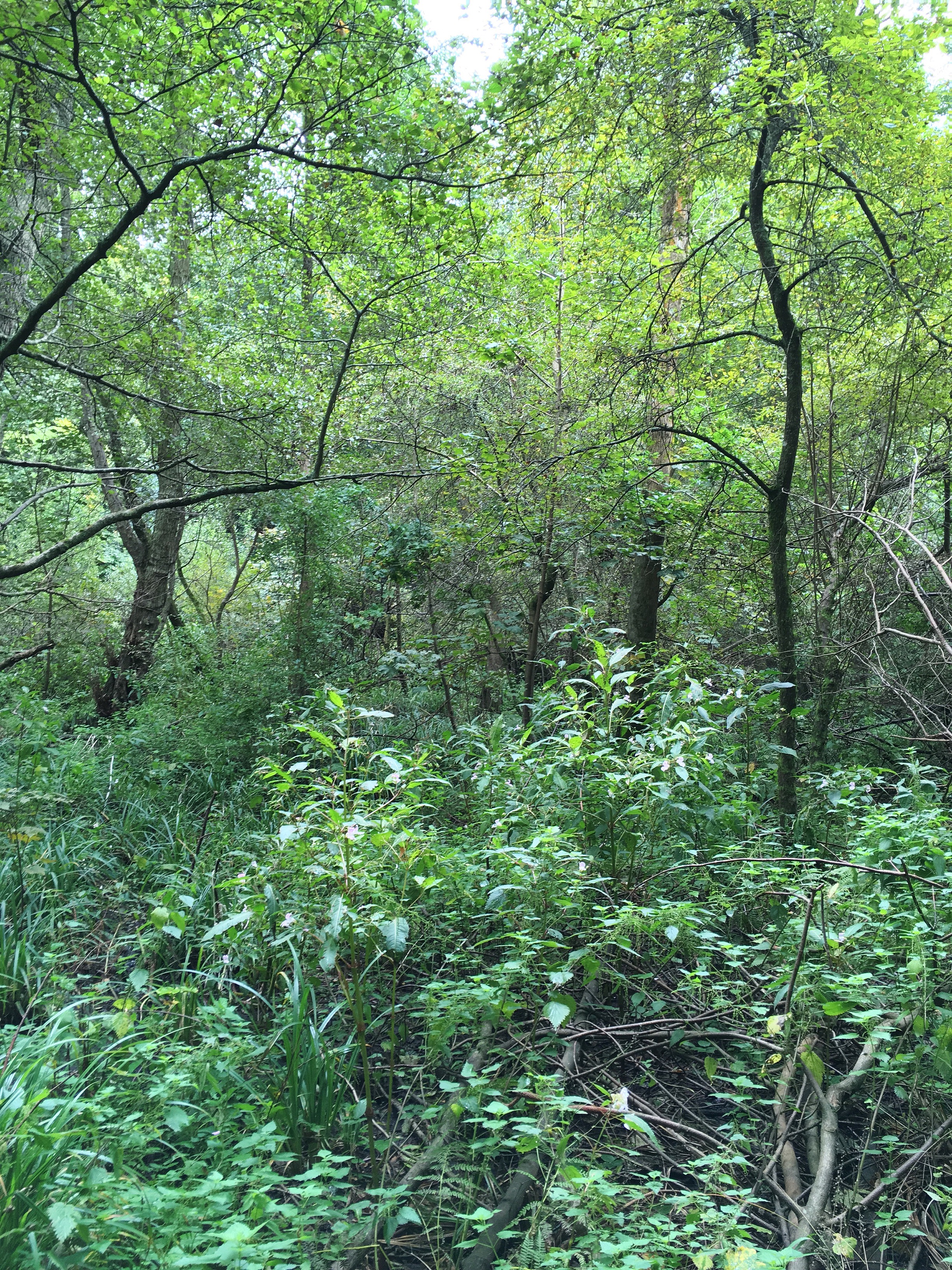 So far the trail was mostly firm and dry, if very overgrown in places, and my shoes were holding up well. We were going further and further down into the valley though and soon we came to a very familiar group of trees. Four maples have somehow grown in almost the same spot. As they’ve got larger their roots have entwined as if they’re holding hands. Much as I love the look of them, seeing them told me we were now on the trail at the bottom of the valley and things were about to get muddy. 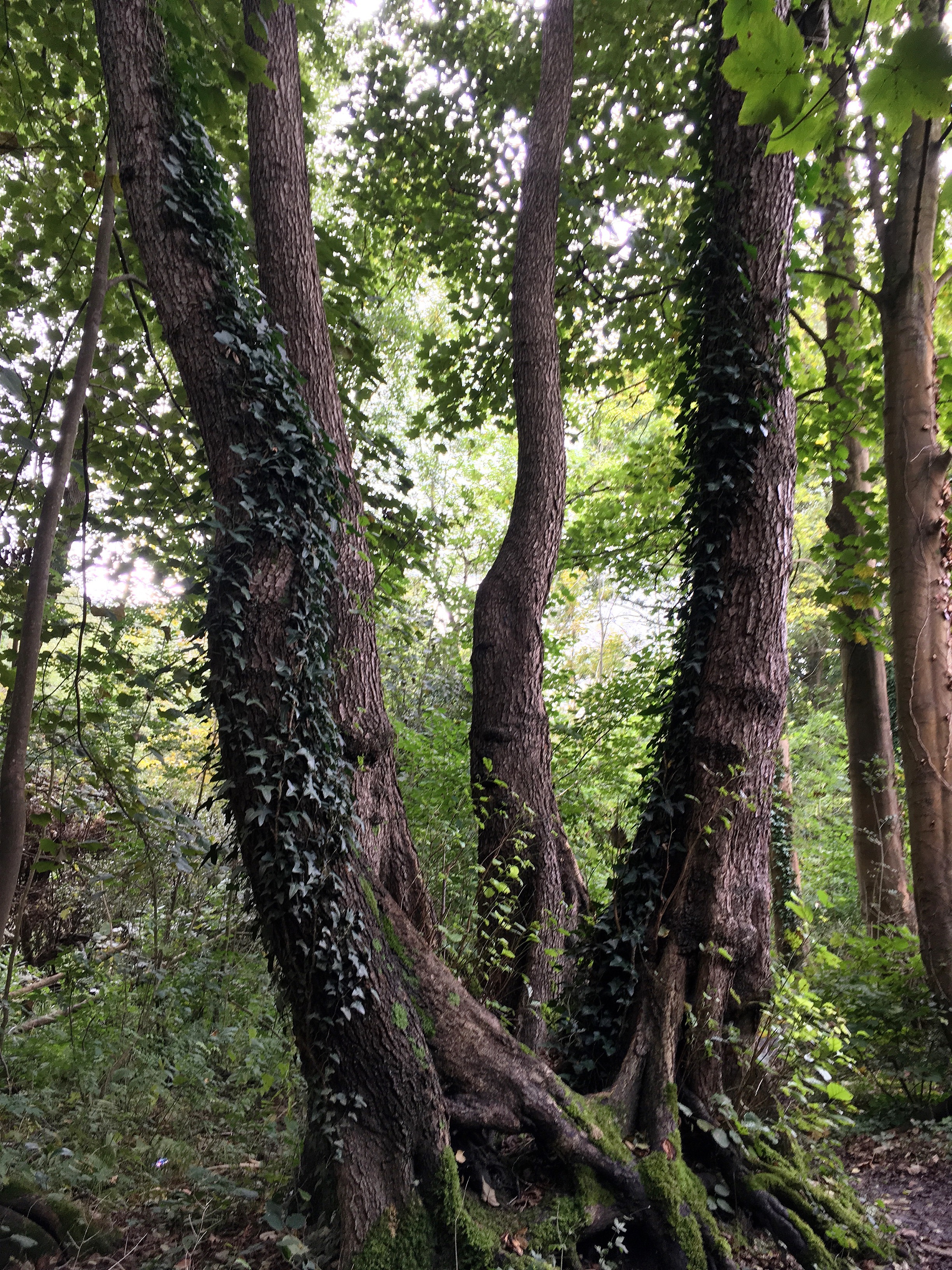 We could have turned back to the fairy door trail but we were reluctant to climb  up the steep bank only to end up more or less where we’d started. Besides, the path wasn’t too bad at this point and I knew there was another side trail leading to the road not too far ahead. Now we were walking beside the stream there was more to look at too. Himalayan balsam is everywhere, even here, and many of the fallen trees were decorated with fungi. 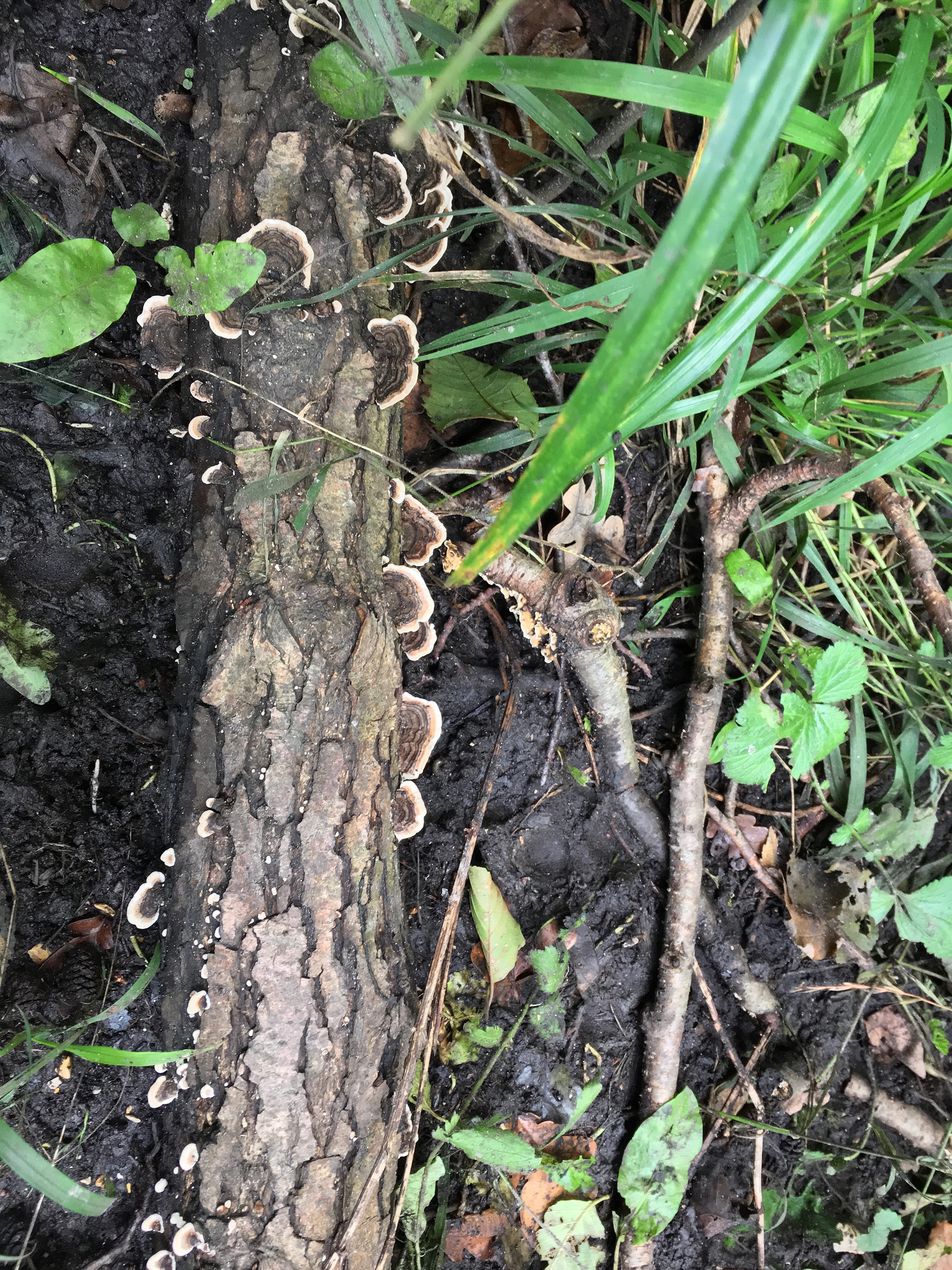 We hadn’t got far before we hit the first real mud of the walk. With my boots on, it would have been no problem and, even without them, it was easy enough to skirt around using tree roots and a few logs placed by some kind person. 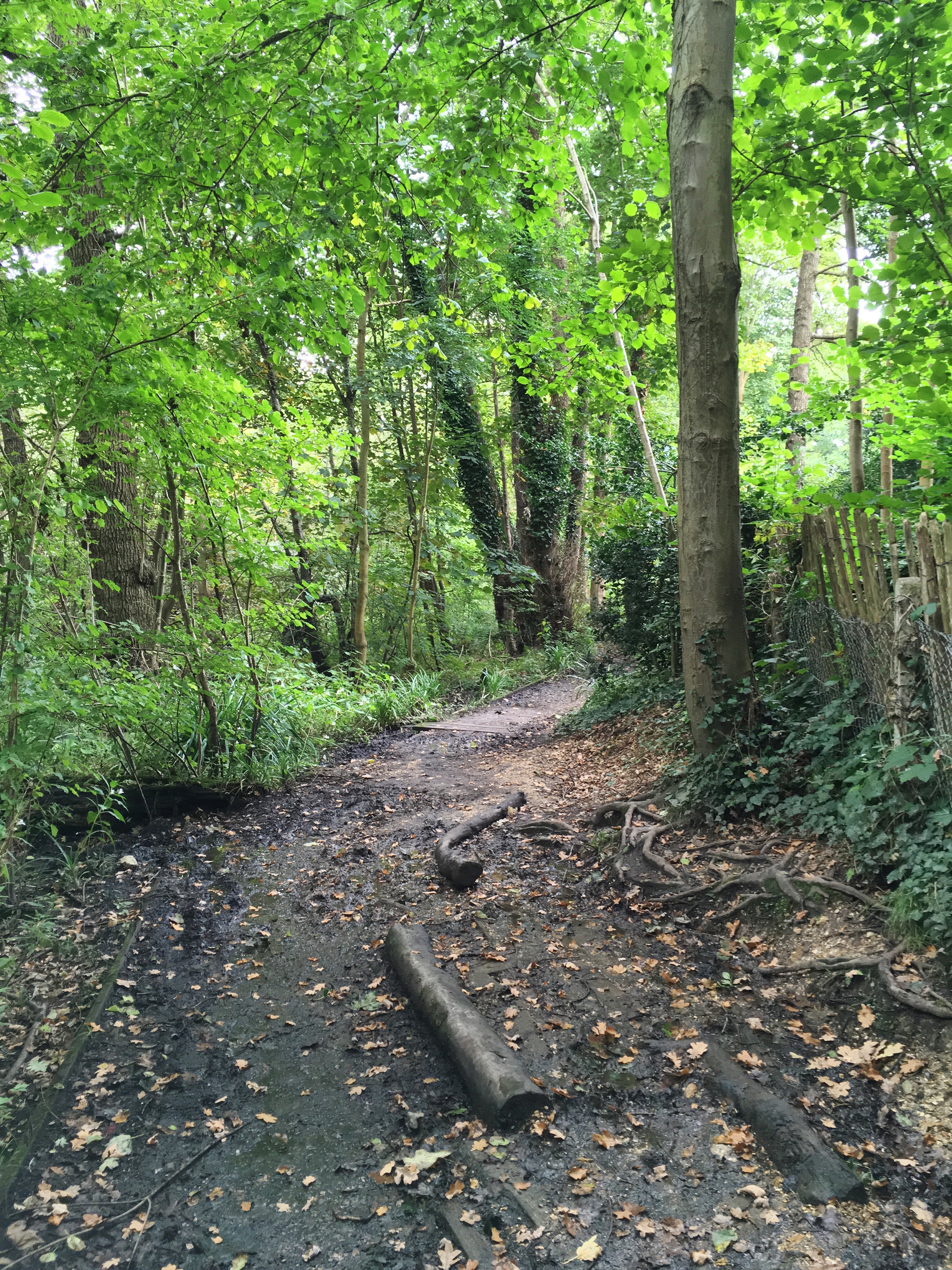 The next mud was worse. One of the rills flowing down the steep banks crossed the path and turned it into a quagmire. Luckily, more well placed logs helped us across and my shoes stayed more or less clean. 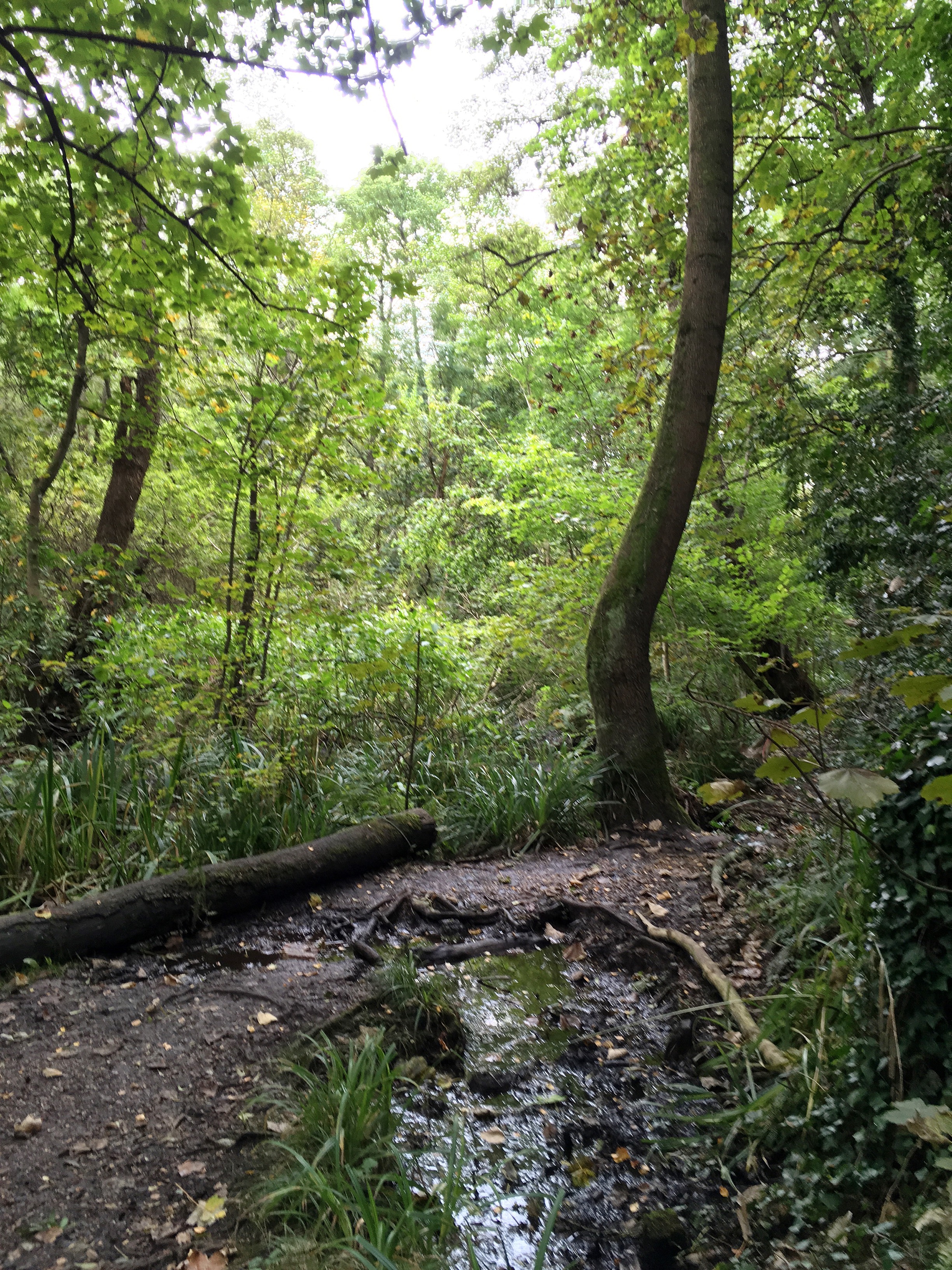 Now we were right on the bank of the stream. The beech leaves reflected beautifully in the still water and CJ couldn’t resist stopping to skim a few stones. Thinking of my shoes I stayed further back and watched. 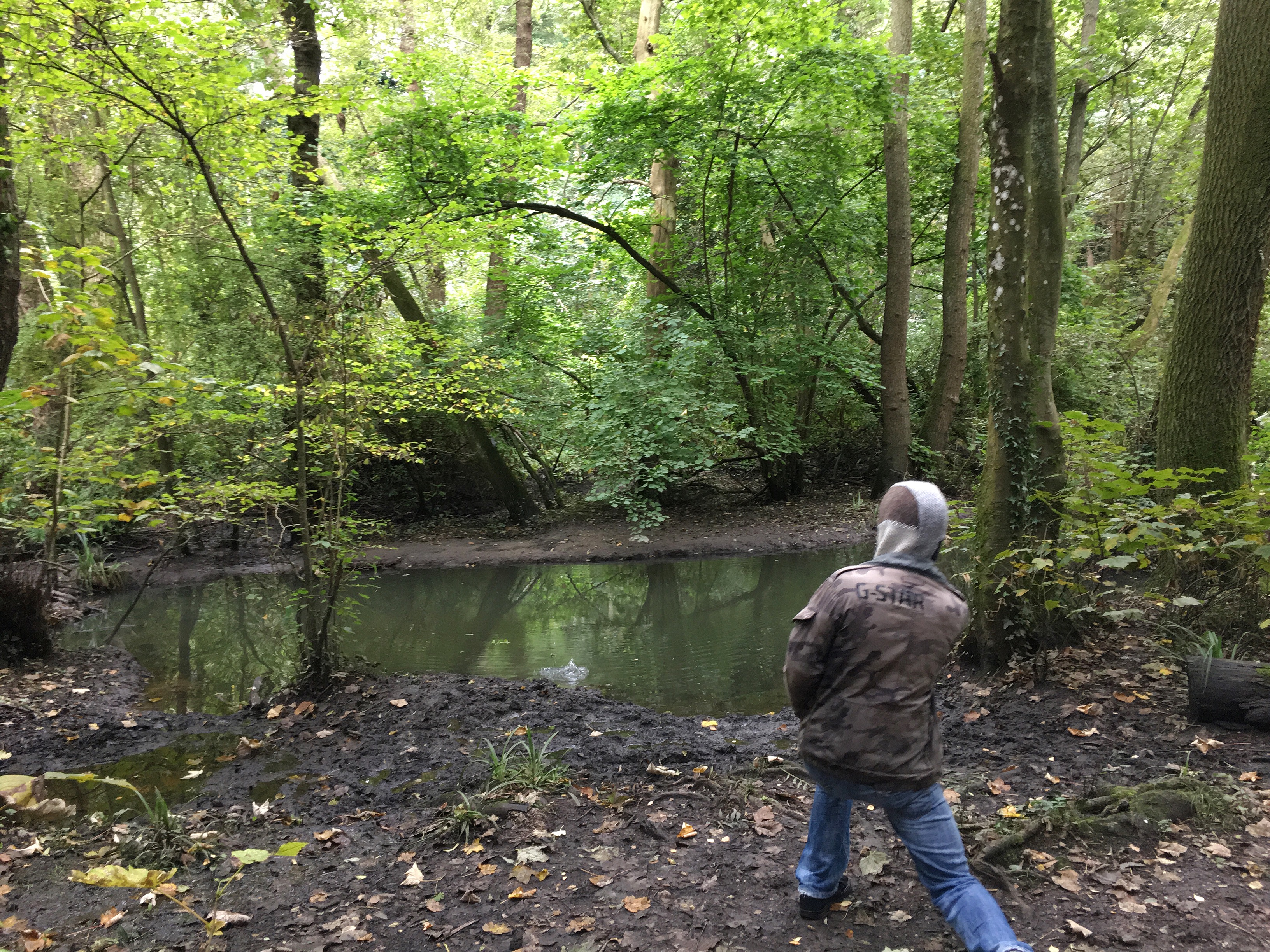 The trail here wanders along the banks of the stream sometimes right beside it, others higher up. It is littered with rotten logs and the logs are home to lots of interesting fungi. Sadly many of them are inaccessible as far as taking photographs goes but, with a bit of climbing, I did capture some. 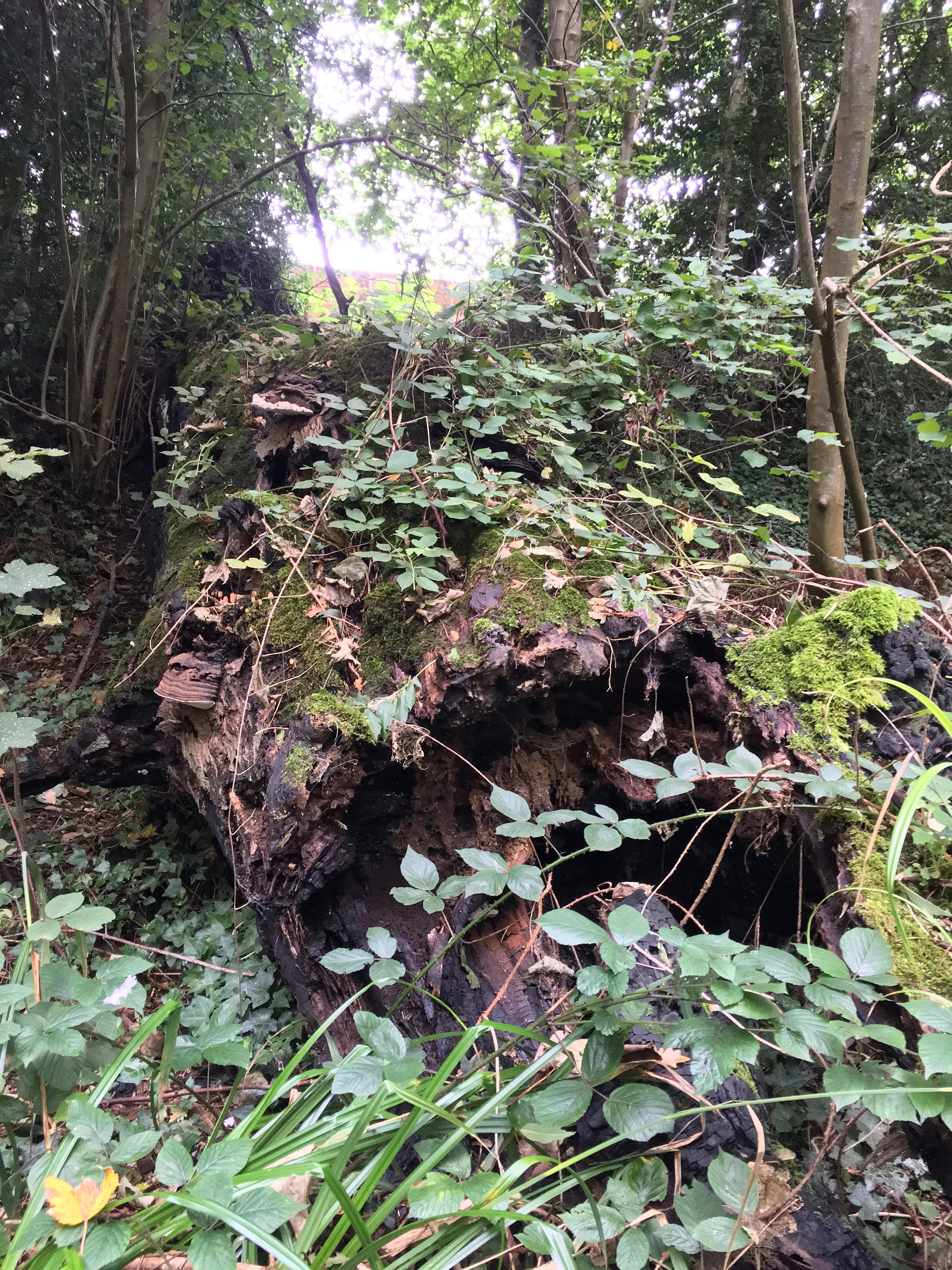 The canopy of leaves was so thick I couldn’t tell if the sky was still blue or not but I didn’t much care. This wood is littered with the bodies of fallen trees, slowly rotting and returning to the earth. Here and there patches of sunlight on the trail bear witness to where they once stood. The smell of their decay, the damp, loamy earth and the slightly eerie green light through the thick canopy added to the air of otherworld about this place and, despite the mud, it felt like a magical place to be walking. If I’d seen a fairy, a leprechaun or even a caterpillar sitting on a mushroom smoking a hookah I’d hardly have been surprised. 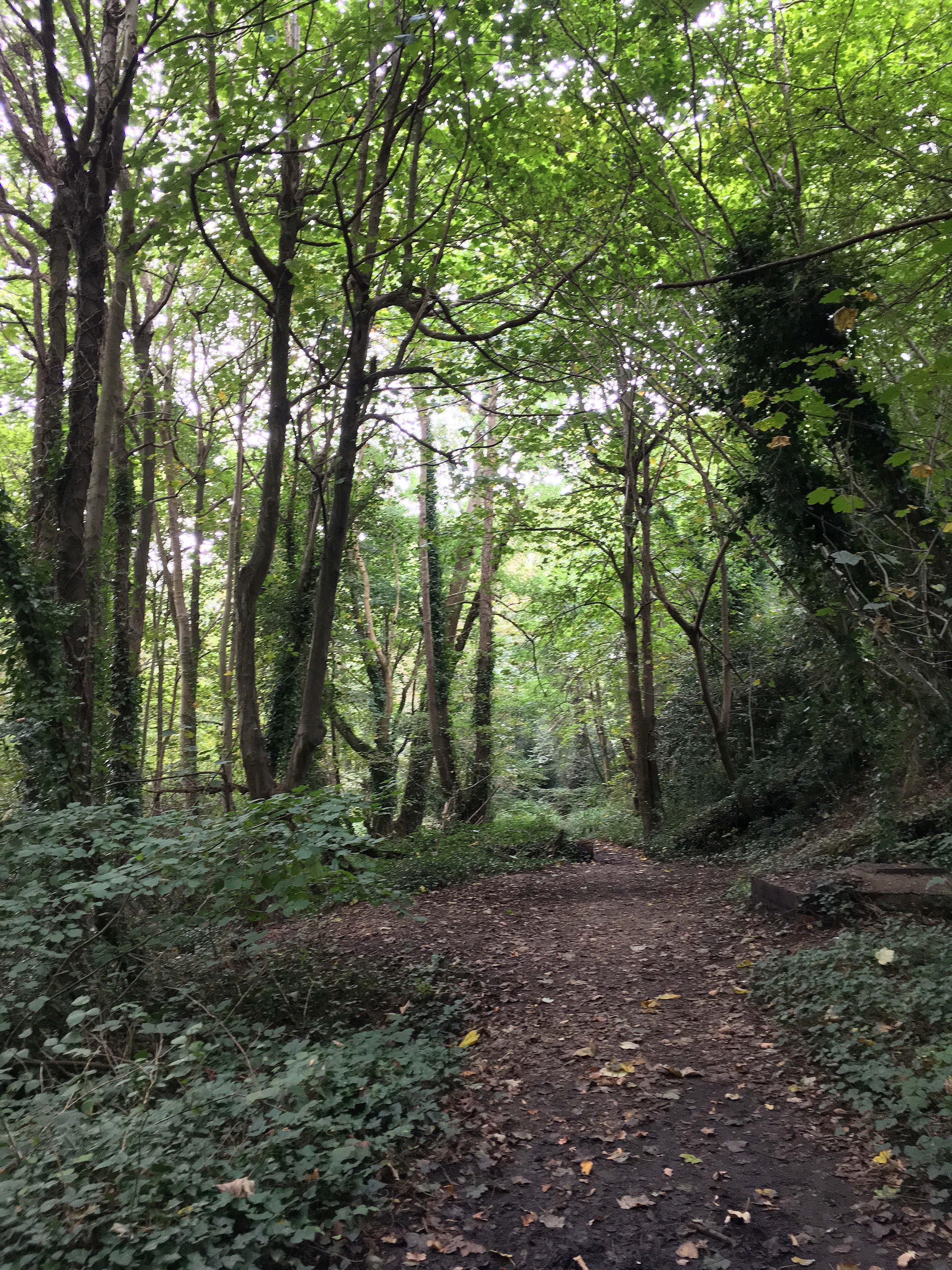 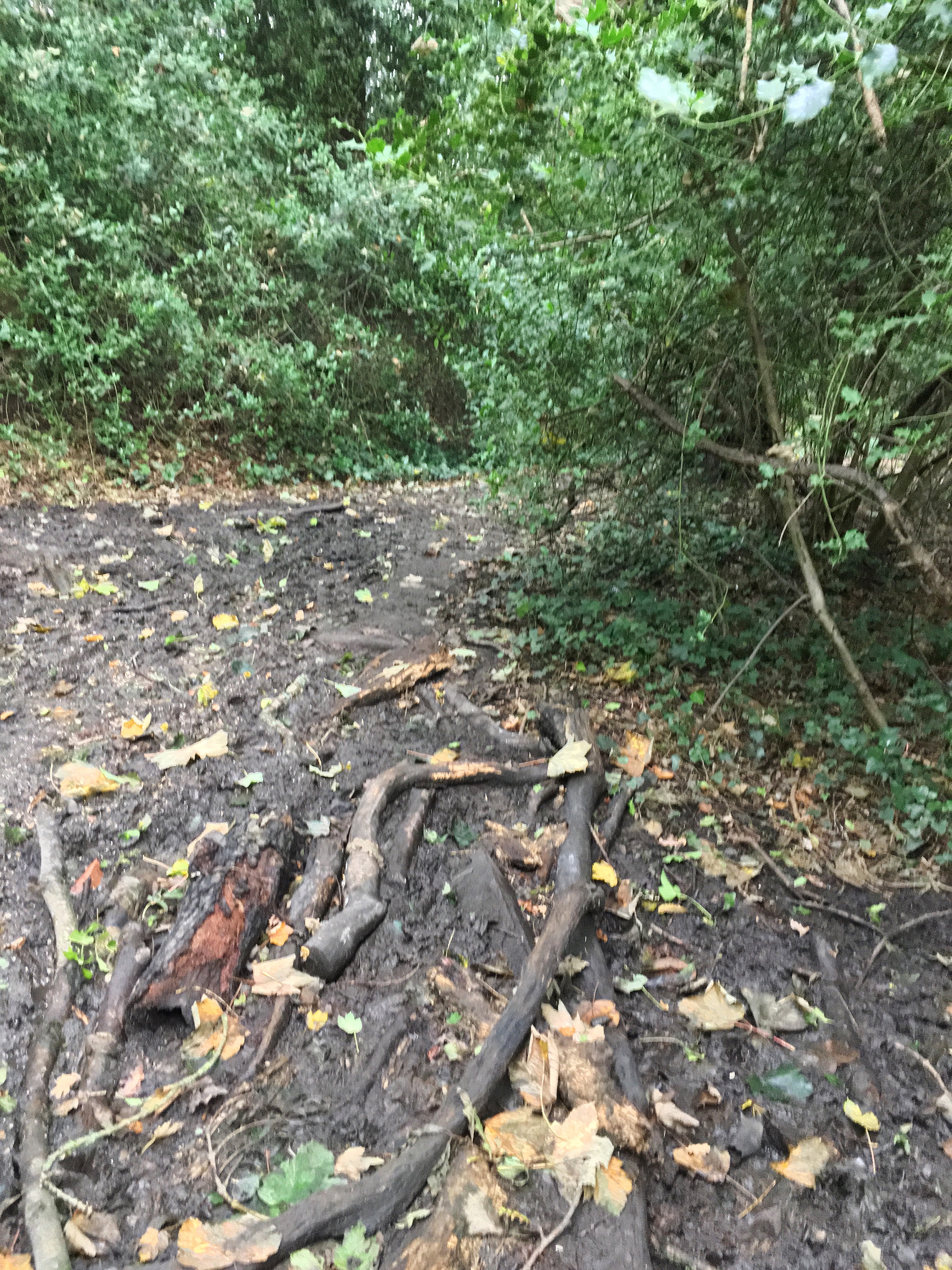 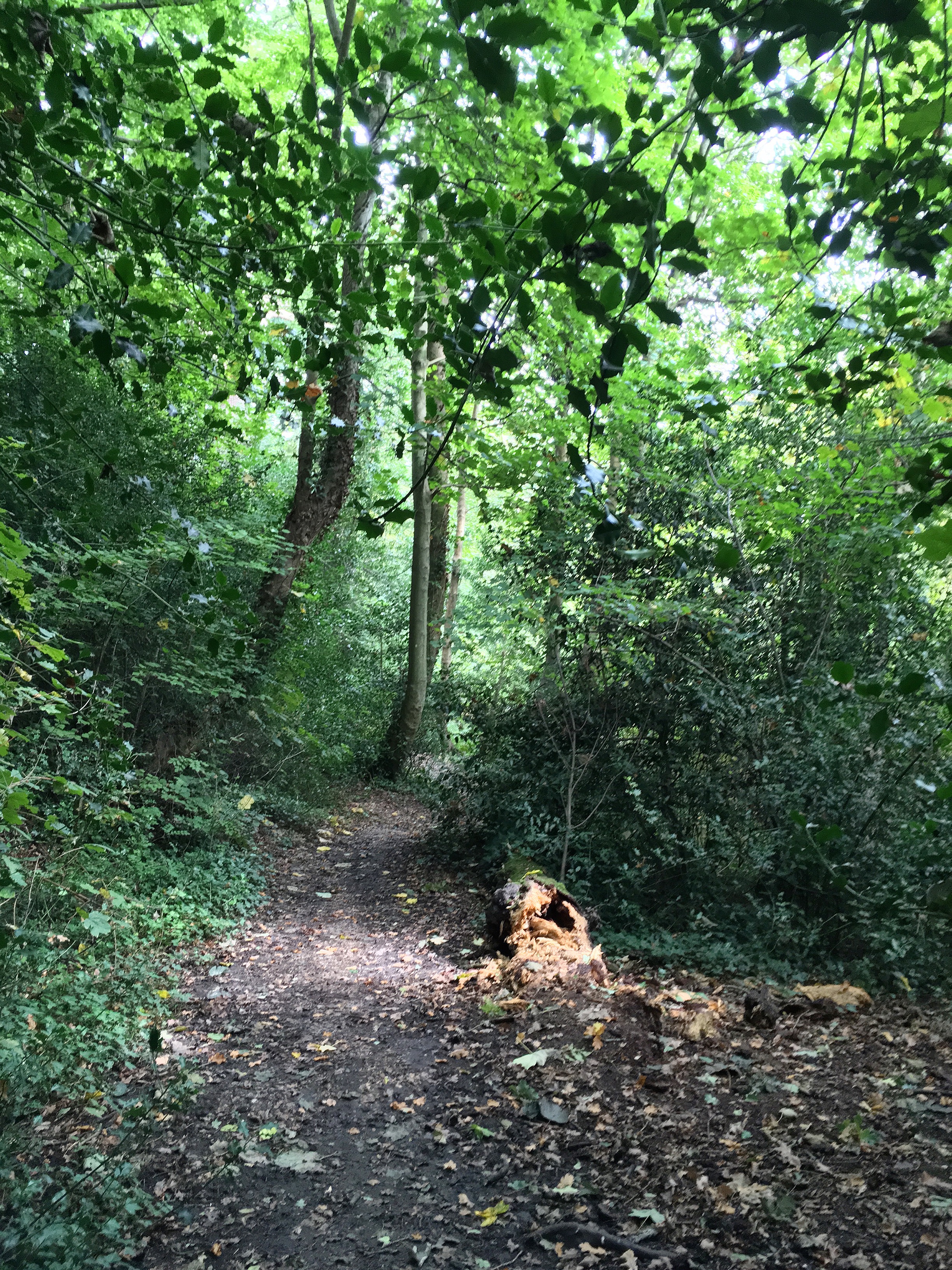 We walked on with one eye looking for interesting fungi and the other watching out for mud. Mostly the mud won but I did capture a small crop of turkey tails. Then we came to a patch of mud so big there was no skirting around it and no helpful logs. It was so gloopy and wet, going through wasn’t an option but turning back would have added miles to our walk. After a little dithering we managed to get across by holding onto trees and clambering over undergrowth. My poor shoes were no longer clean but, thankfully, my feet stayed dry. 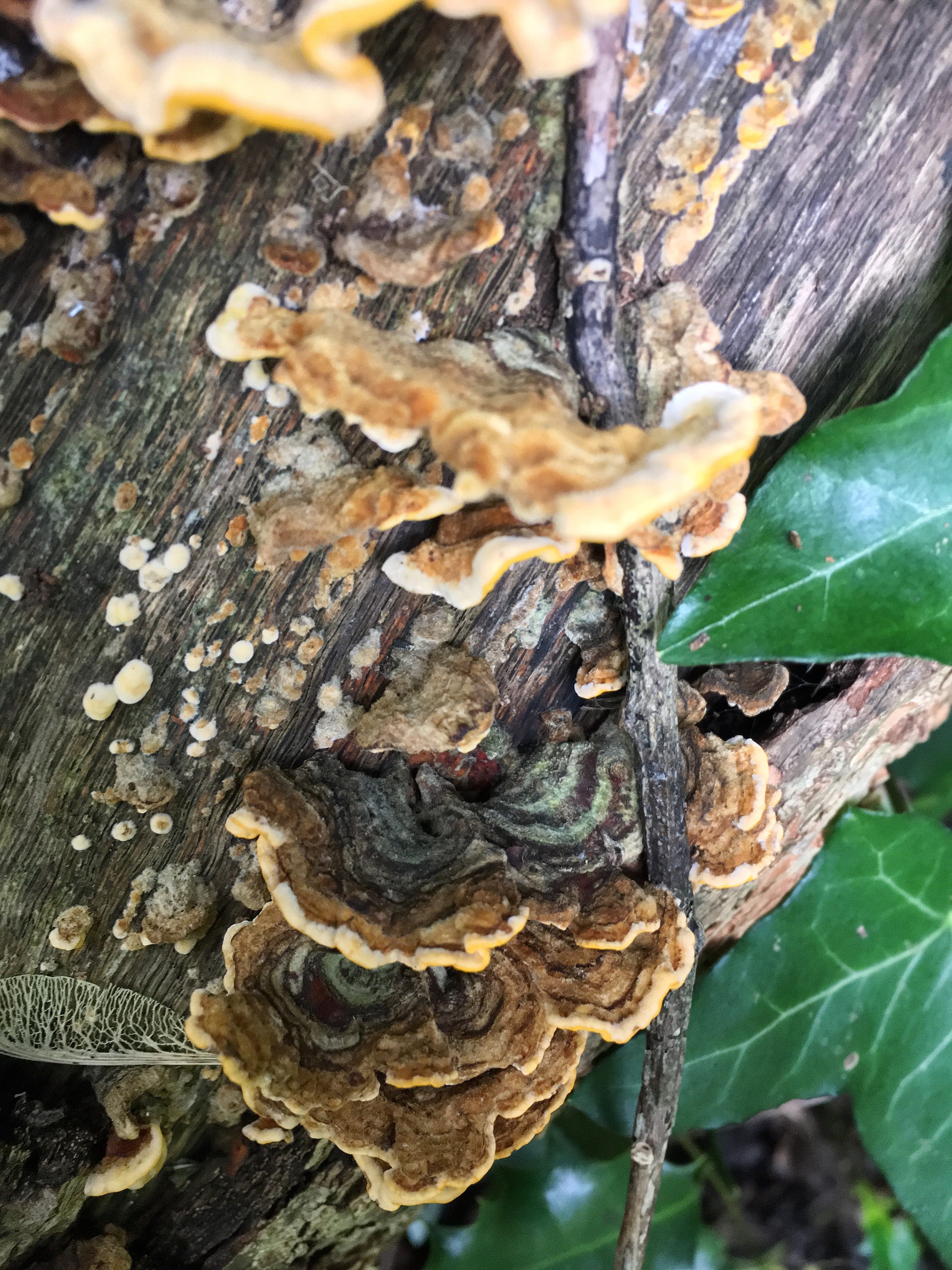 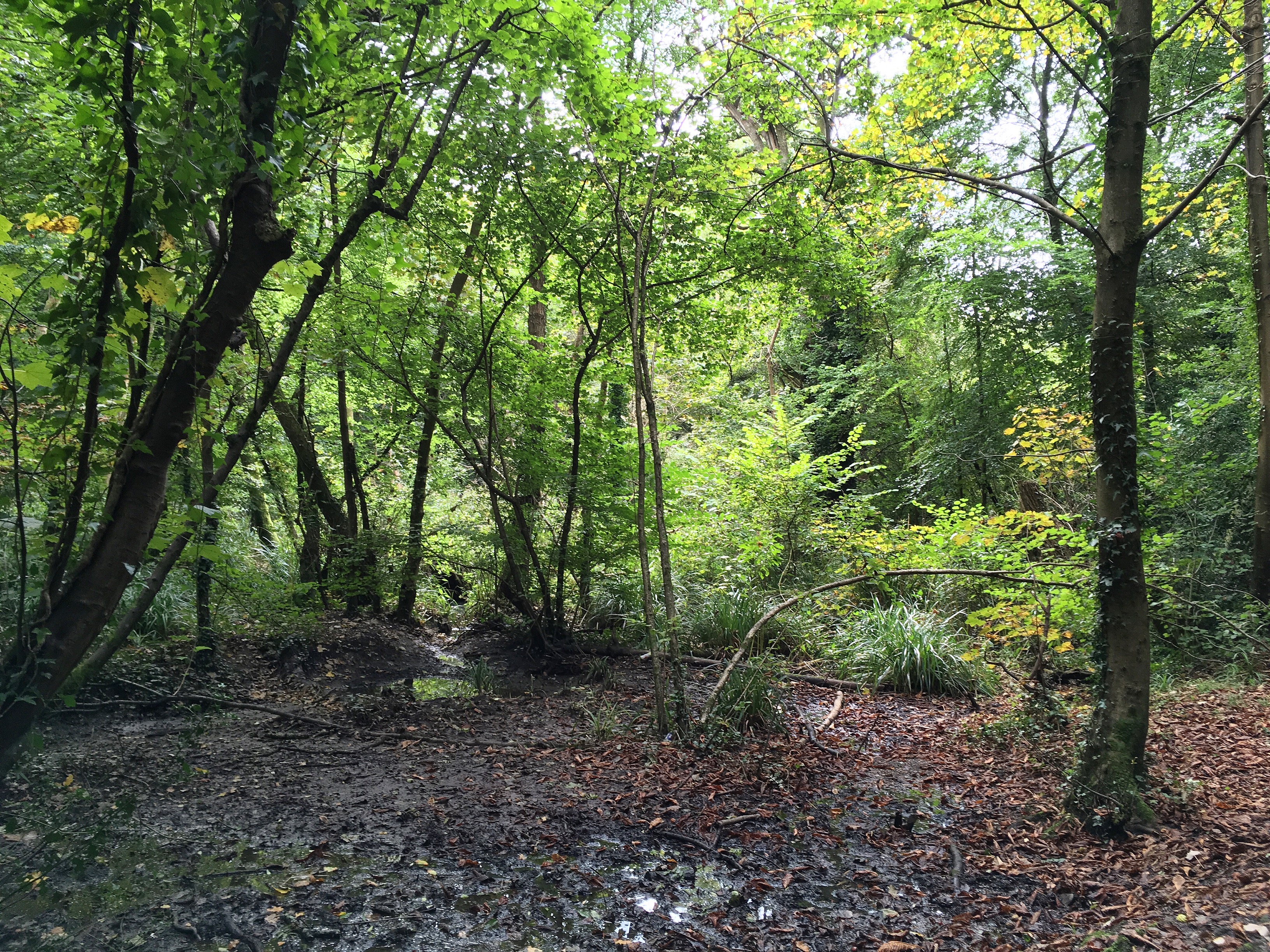 Further on some railway sleepers had been laid across one of the larger rills creating a little wooden bridge. Beside it was another fairy door, although maybe this one belonged to a troll, the guardian of the bridge? 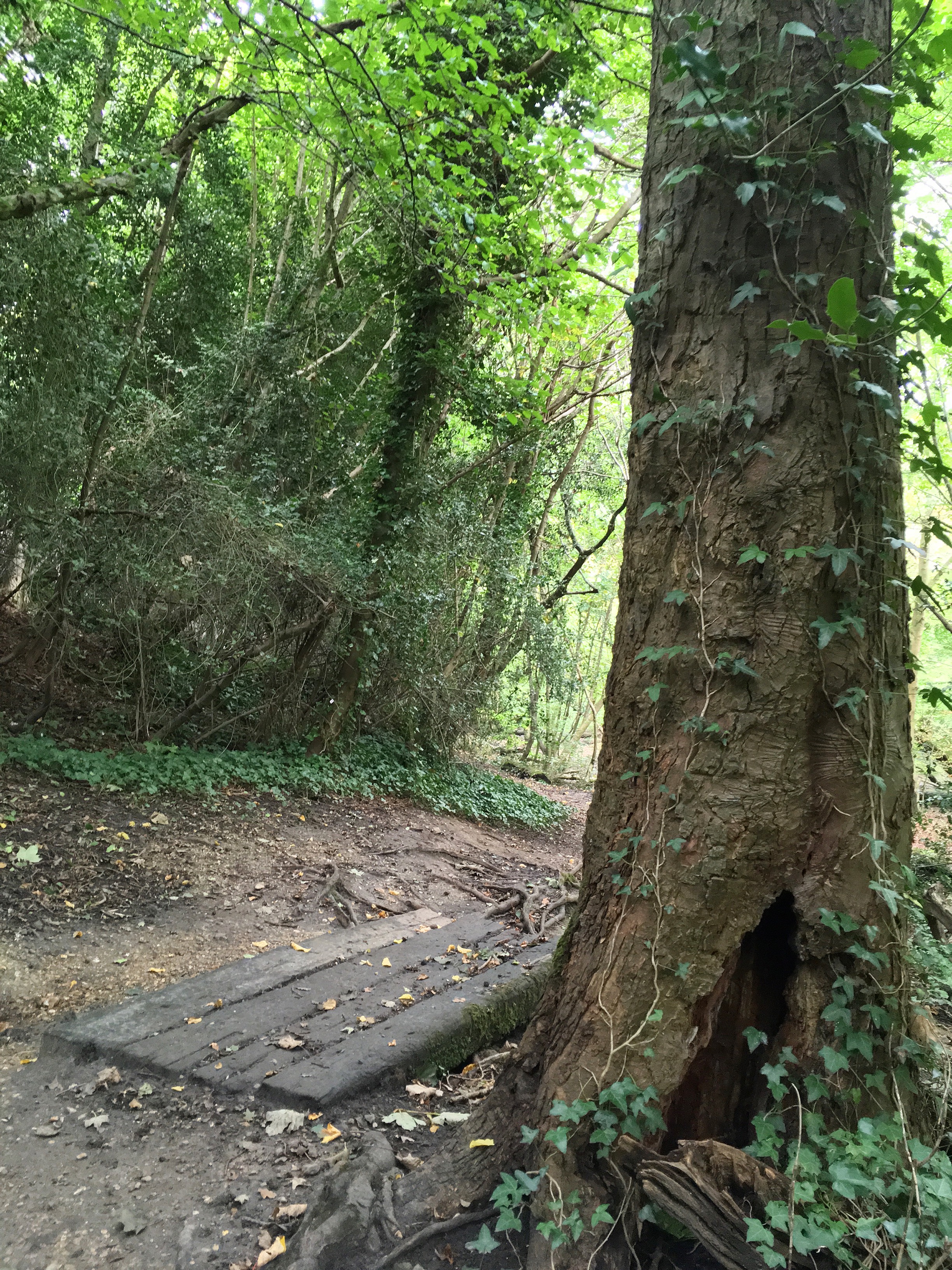 The stream here was flowing faster and had divided into two channels. The nearest to us was busily eating it’s way into the bank. One day it will have devoured the whole trail and, unless someone builds another bridge, there will be no way through. 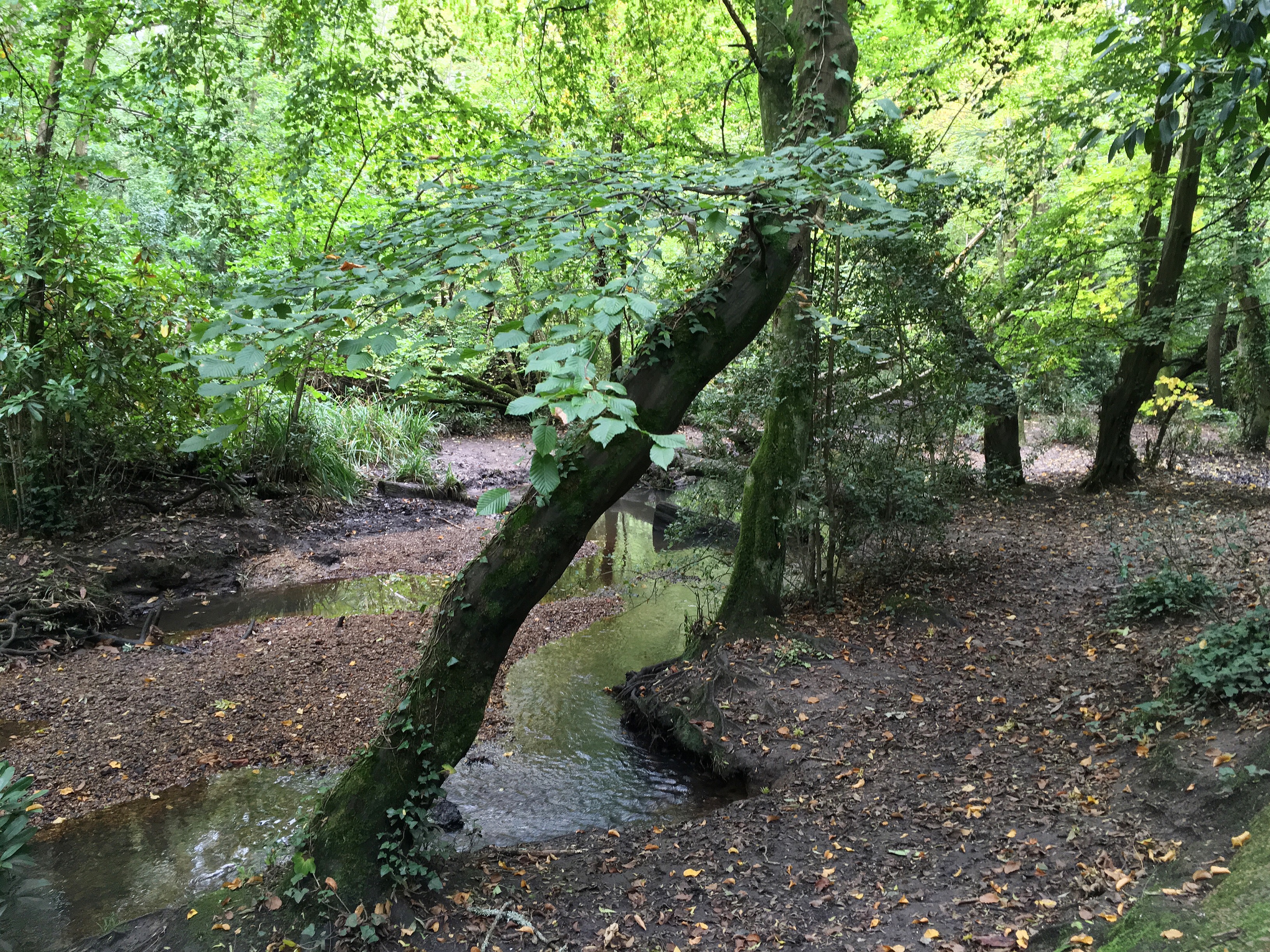 Soon we could see the current bridge ahead. On the other side was the butterfly walk and, ultimately Millers Pond. To our left a steep trail with wooden steps here and there climbed the bank. As Far as I could tell this would take us out onto Archery Grove. It was descision time again, did we take the steep root and avoid more mud or did we cross the bridge? 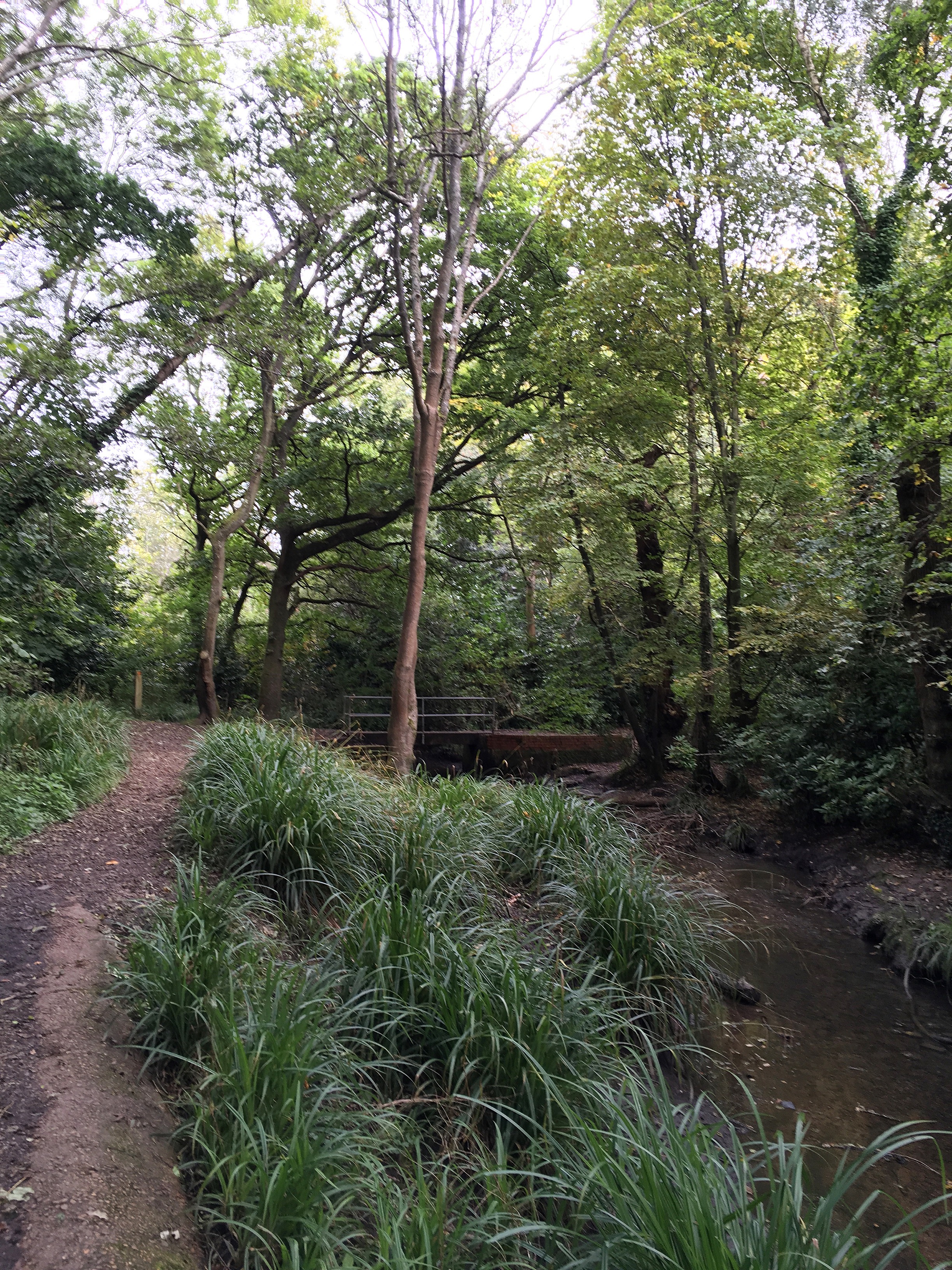 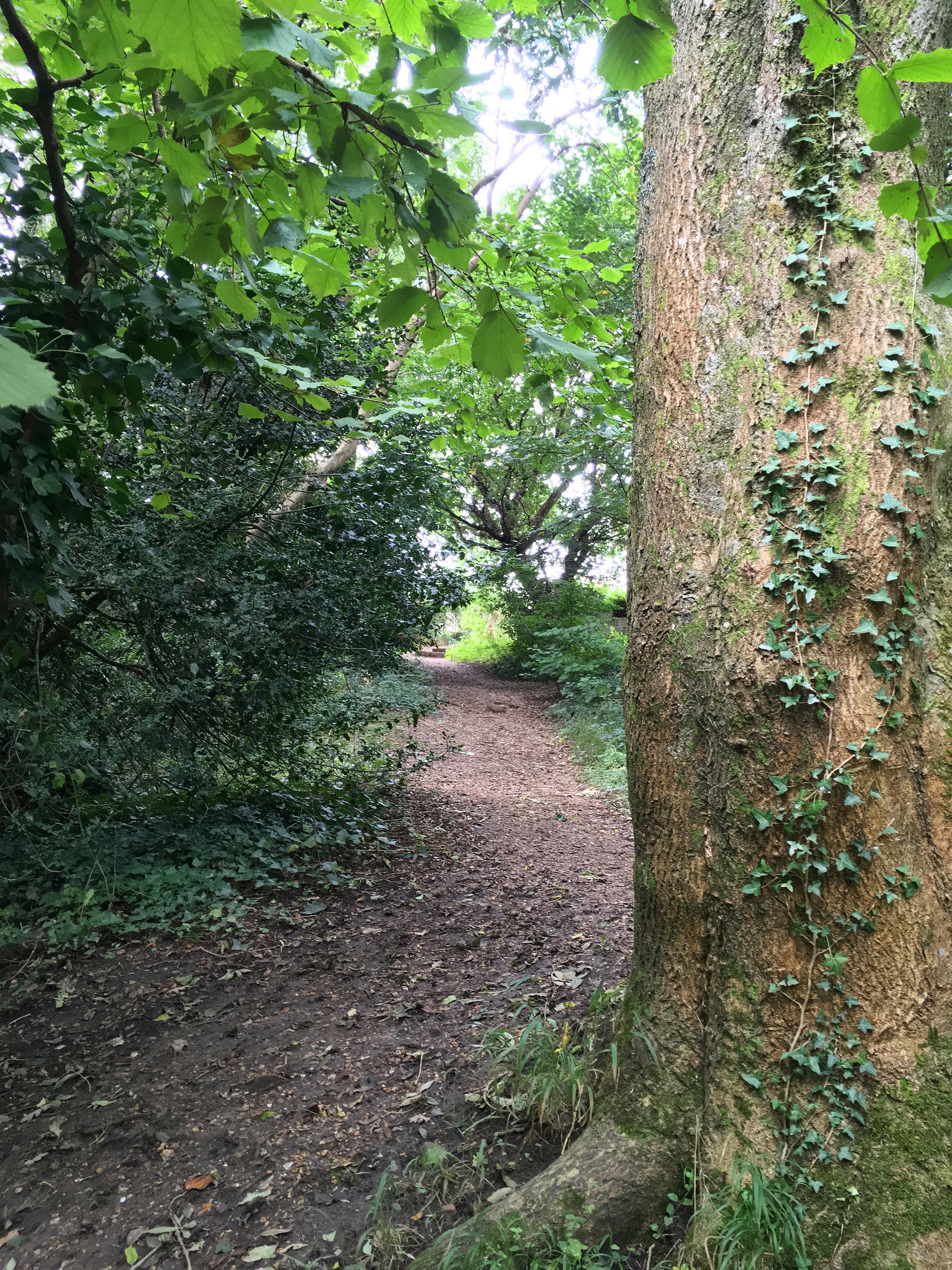 9 thoughts on “The fairies of Archery Woods”