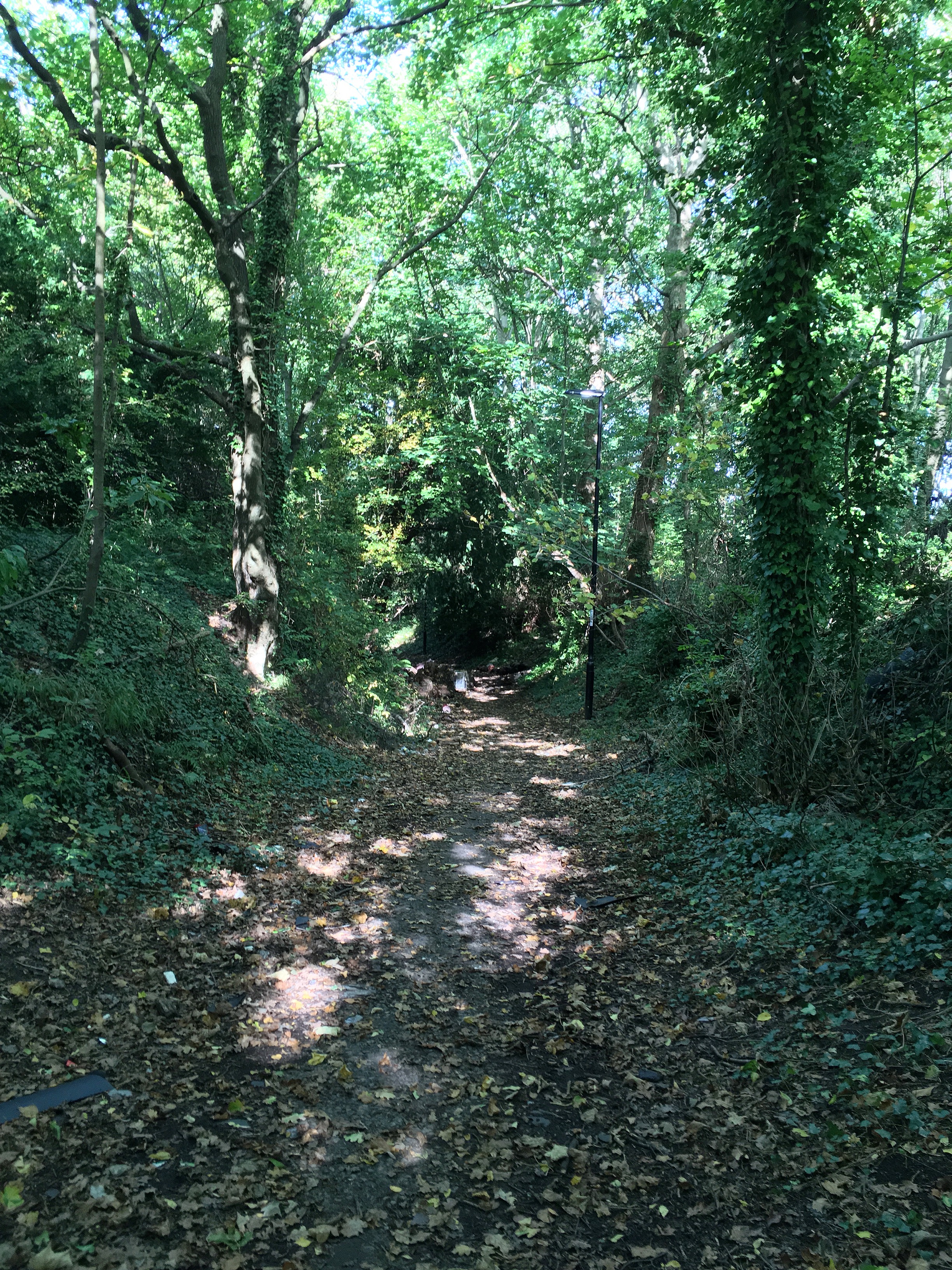 We left Chartwell Copse feeling rather excited to have discovered a new and interesting looking footpath. Walking towards the gate I was careful to keep my bearings so I’d know which way to turn to get to it. Hopefully it wouldn’t be too hard to find a way onto it and then we could explore and find out where it led.

As luck would have it we found another narrow cut way between the houses and,  at the other end, the new footpath was in front of us. We seemed to have come out on the middle of it so a choice had to be made, did we go left and upwards, or right and down? As the area we’d been looking down on from the cow feeder would be somewhere to our right, we chose down.
”We can always turn back and find out where the other end goes later,” I told CJ.
In hindsight, I probably should have stopped to look around at the road beside the footpath, or looked at Google Maps to get a better idea of where exactly we were. The excitement of discovery made me impatient to explore though so we plunged ahead.

The first thing we saw, once our eyes got used to the dim light on the overgrown and steep banked path, was a large fallen tree and a lot of debris. It looked as if the high bank to our left had collapsed taking a long dead tree and lots of junk with it. A shopping trolley and an old car seat was tangled among the more natural wreckage, whether it had slid down the bank or been dumped after the mini landslide it was impossible to tell. The tree trunk and several stumps were smothered in fungi so we stopped to take photos. The dappled light slanting through the canopy of trees and the fact we were in a gully, surrounded on both sides by steep banks gave the place a slightly eerie feel and I wondered for a moment if any of the other trees were in danger of falling? Interesting as the fungi were it didn’t seem like a sensible place to hang around too long. 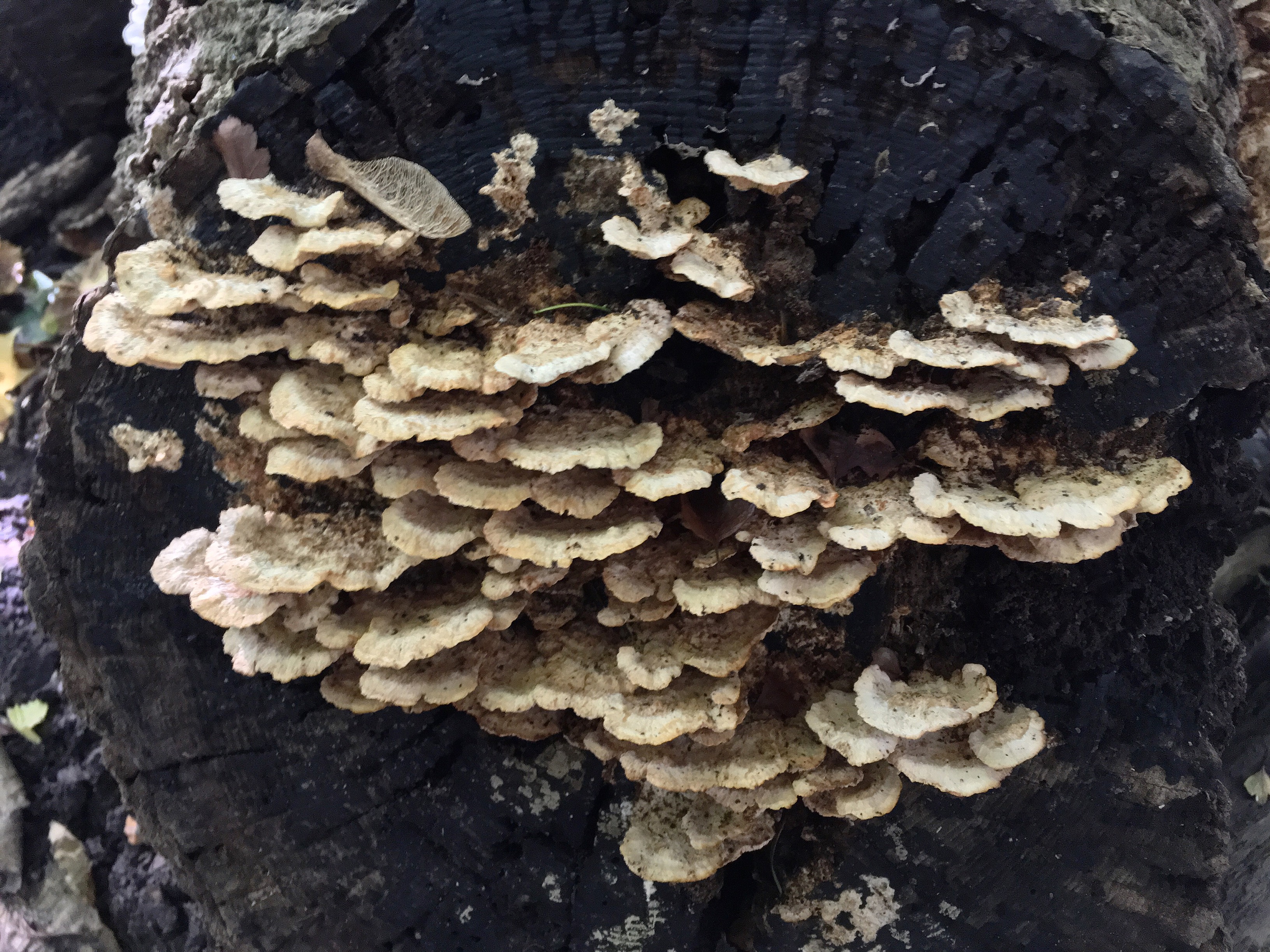 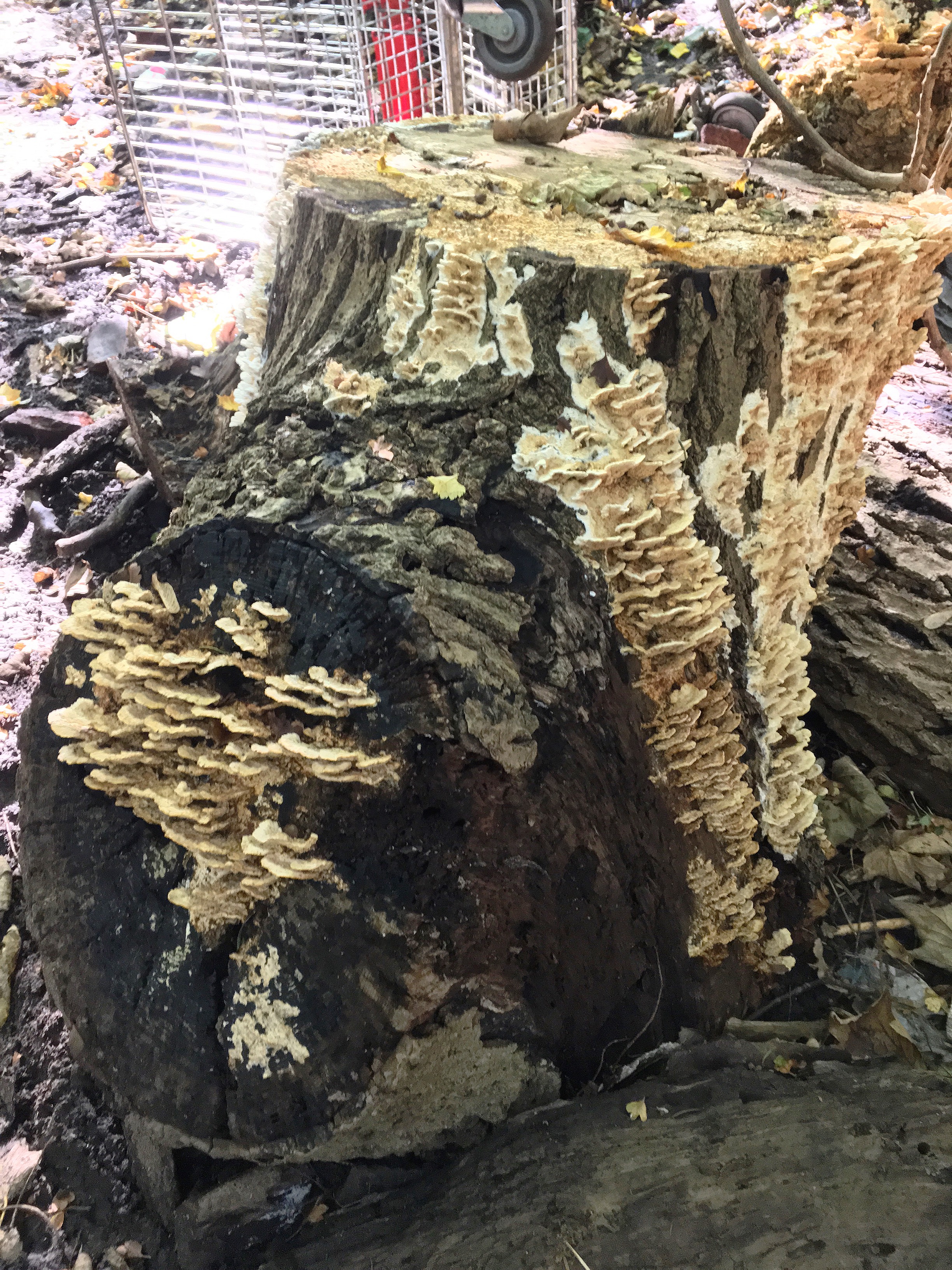 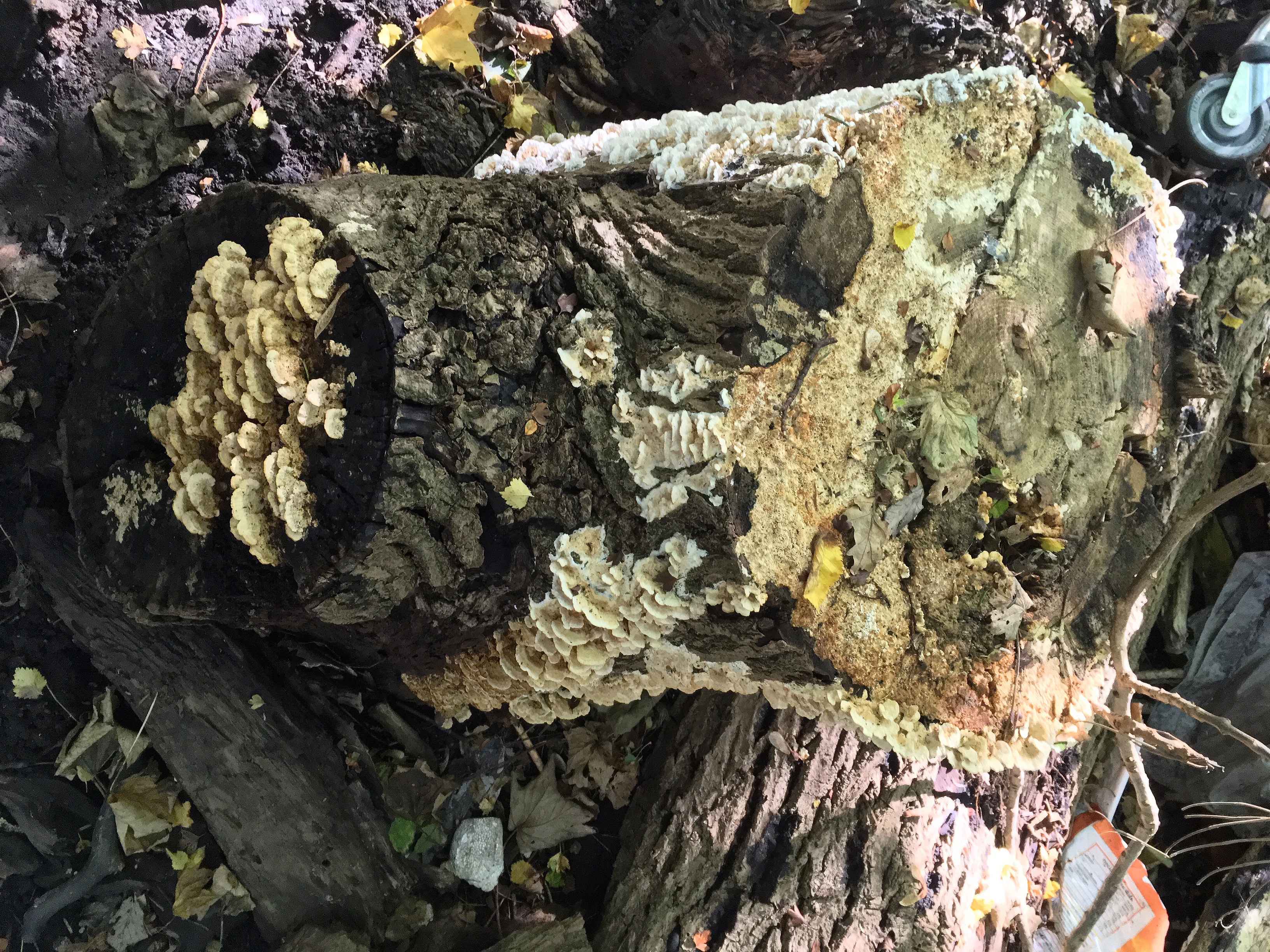 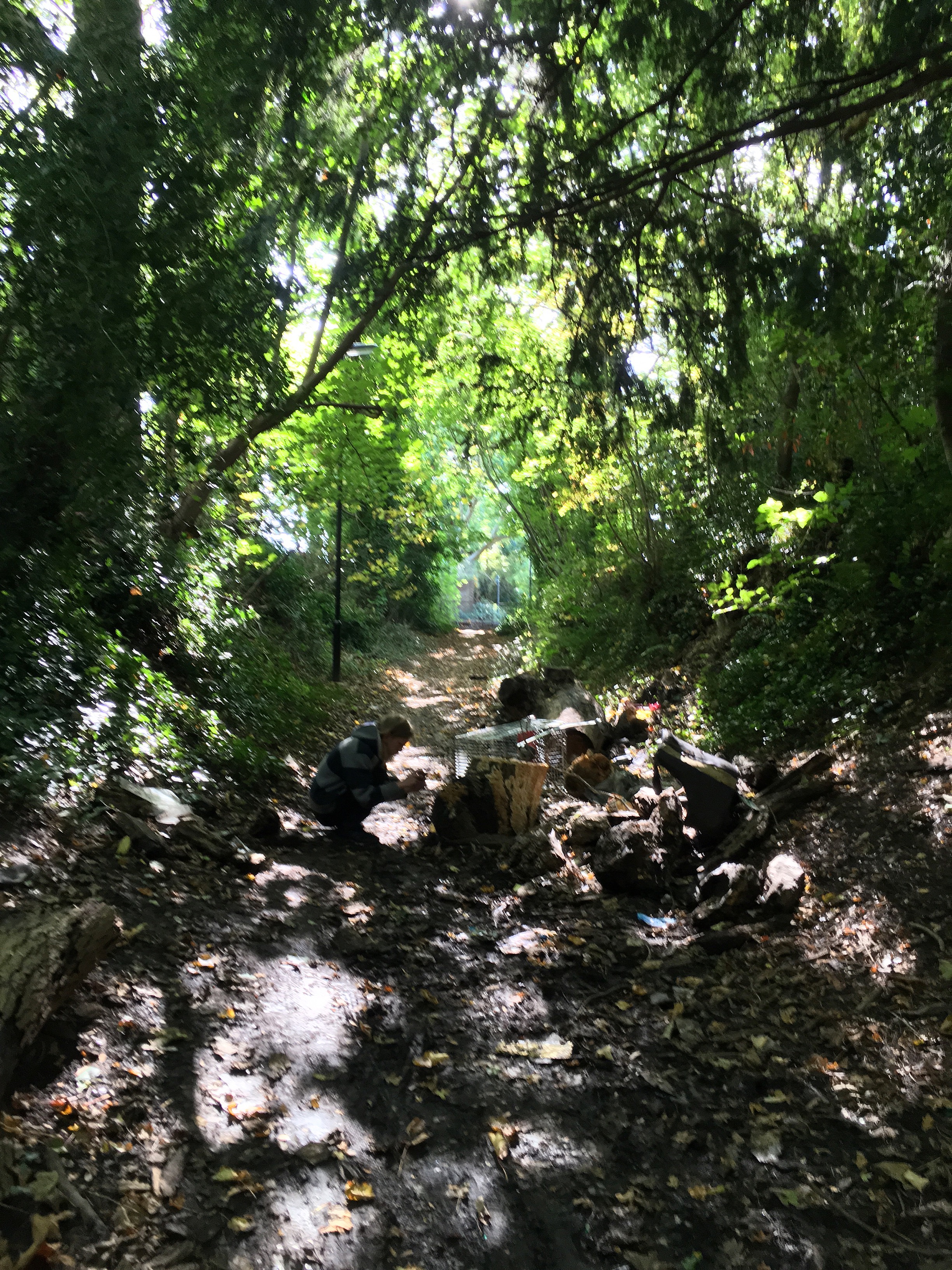 While CJ carried on taking picturesI walked on a little way, searching for the cow feeder, which I was sure must be nearby. It wasn’t long before I saw the concrete platform where we’d been standing looking down not long before. Something about it looked strangely familiar from this angle but I couldn’t quite place what. 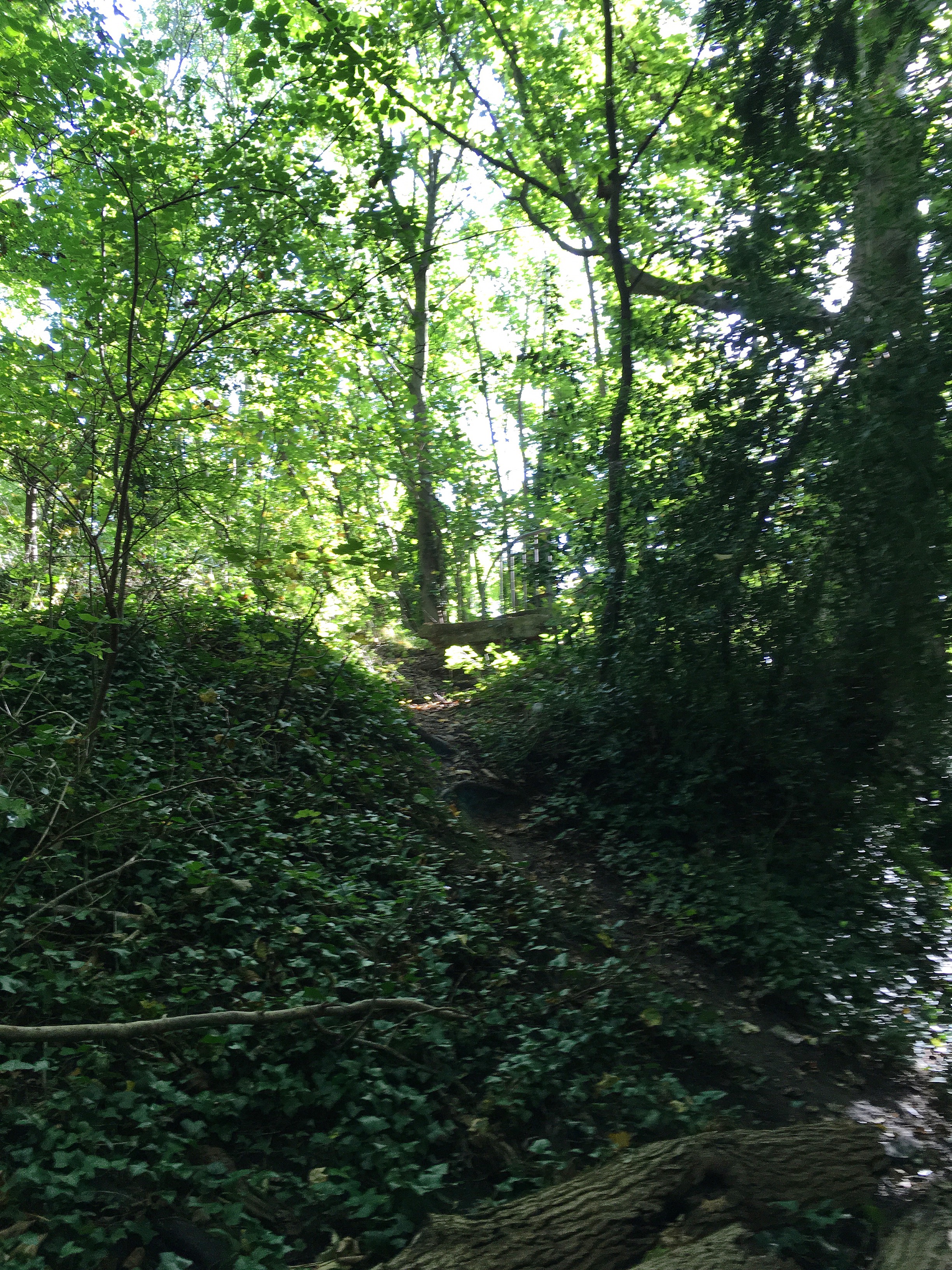 When I looked at the other side of the path everything suddenly made sense. In fact I felt more than a little silly. There was an old gnarled tree clinging to the eroded soil of the bank, just as the tree CJ was still crouched over must once have done. It was a miracle it hadn’t also fallen, the gap beneath its roots was large enough for me to sit in, like a small cave. This was a tree I knew very well. 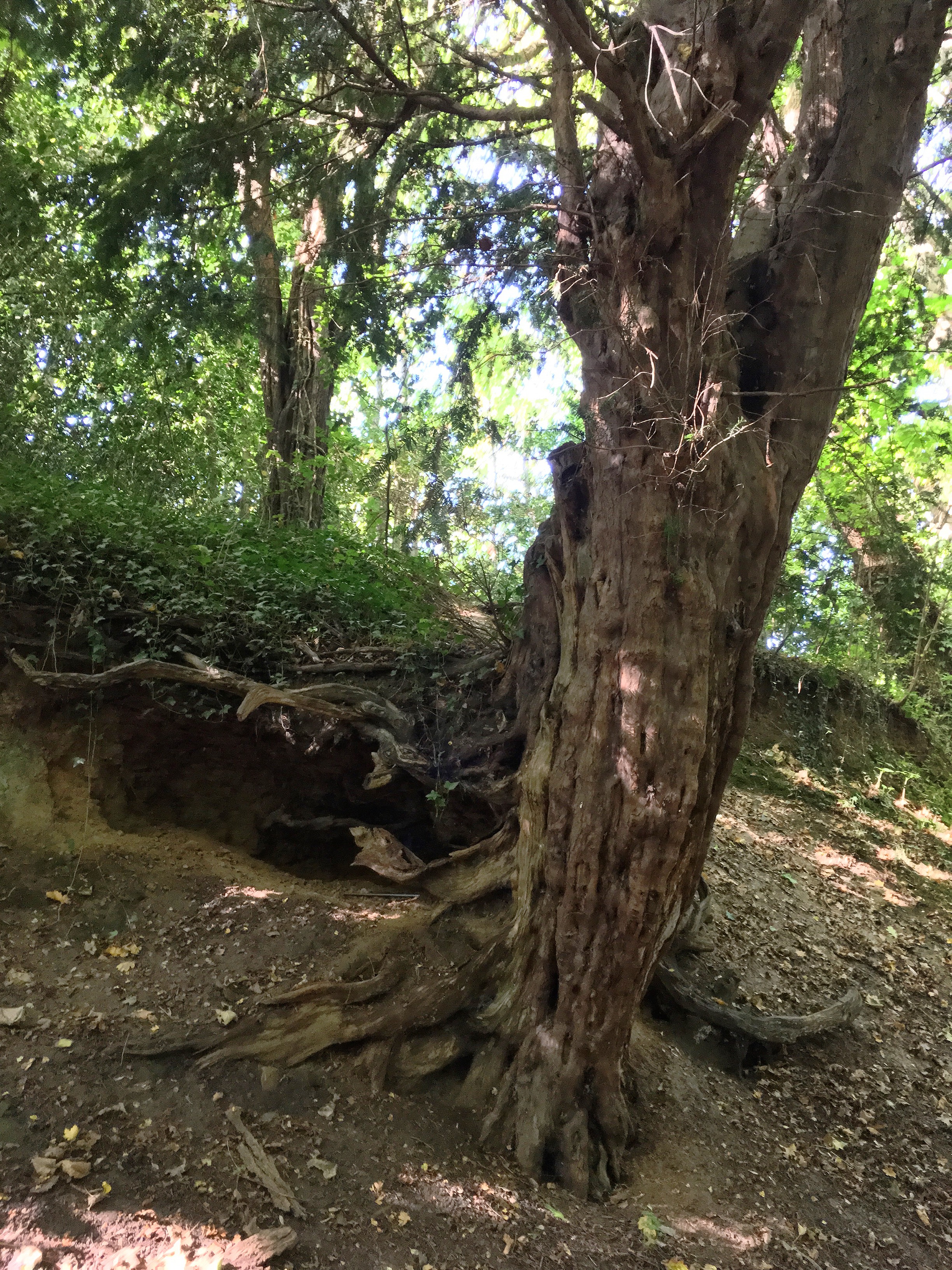 Somehow, with all the changes of direction, going from one cutway to the next and then wandering round and round in the copse, we’d completely lost track of where we were. The new and exciting sunken trail was actually just the top part of Cutbush Lane. In my defence, neither this section of the lane or Chartwell Copse are marked on the map so, while I knew they were both close to each other, I didn’t realise one more or less led to the other. The landslide had further confused things too and even CJ didn’t realise where we were until I pointed out the tree. Laughing at our own stupidity, we carried on to the bottom of the lane and turned towards Mansbridge. 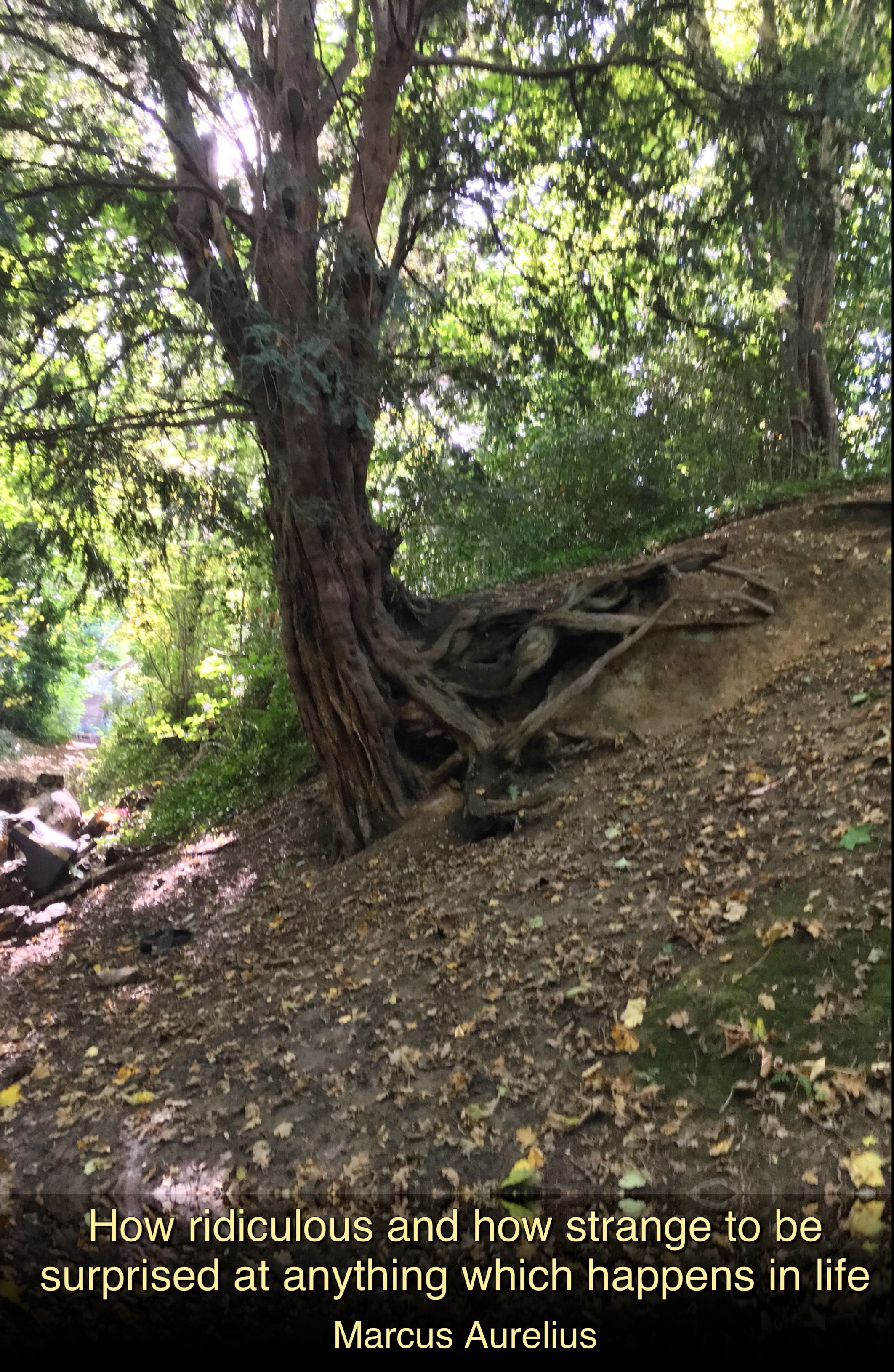 At least we now knew where we were going.
“Shall we head towards the river or towards West End and Hatch Grange?” I asked, as we walked past the playing fields, although I had a good idea what the answer would be.
“The river,” CJ grinned, thinking of the prospect of a coffee in The Swan Garden Centre. 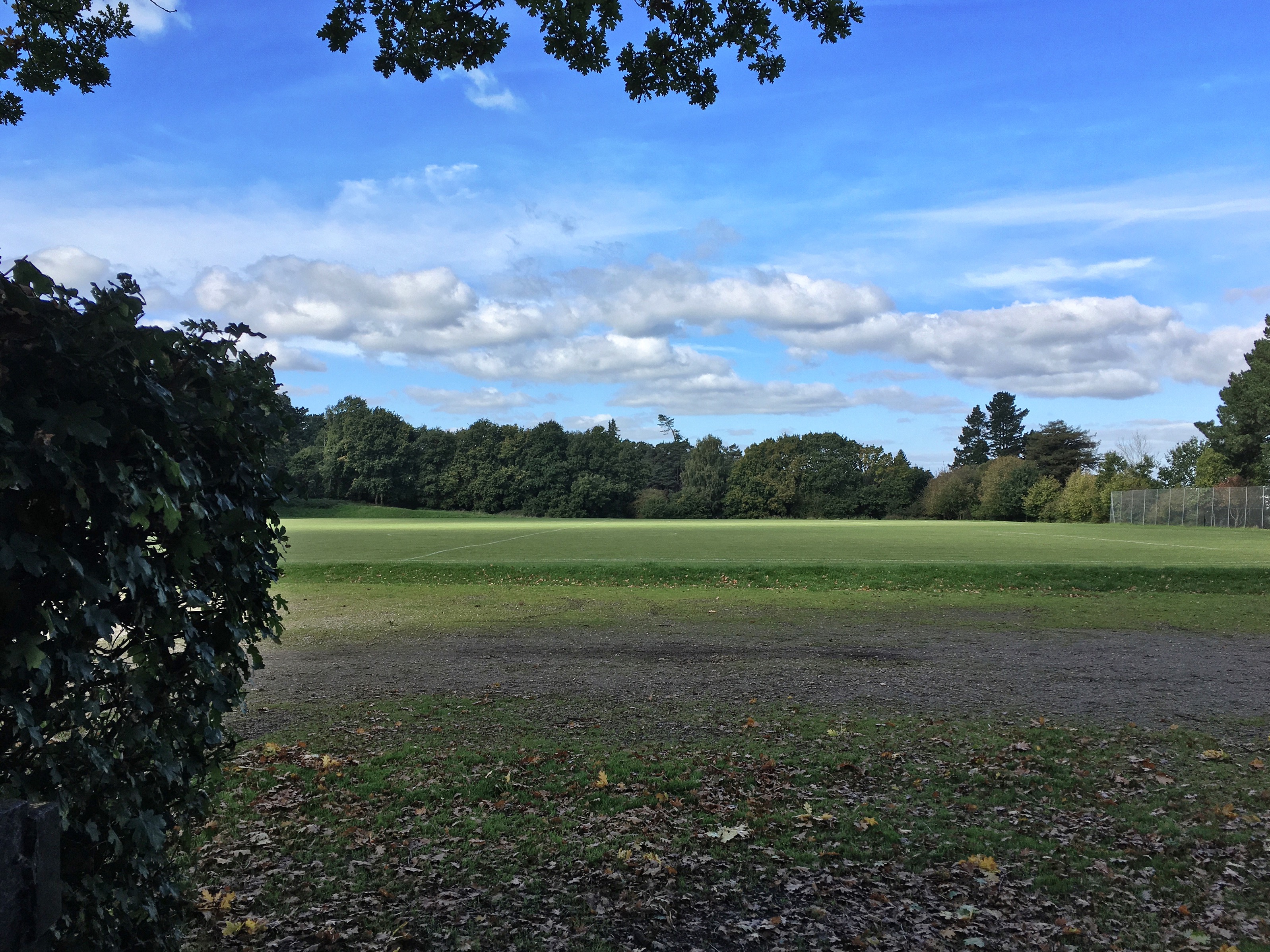 At the end of the lane we turned left and, after a quick stop to pick up takeaway coffee in the garden centre, we were on our way down Gaters Hill. As we walked we laughed about the new footpath that turned out to be not so new after all. 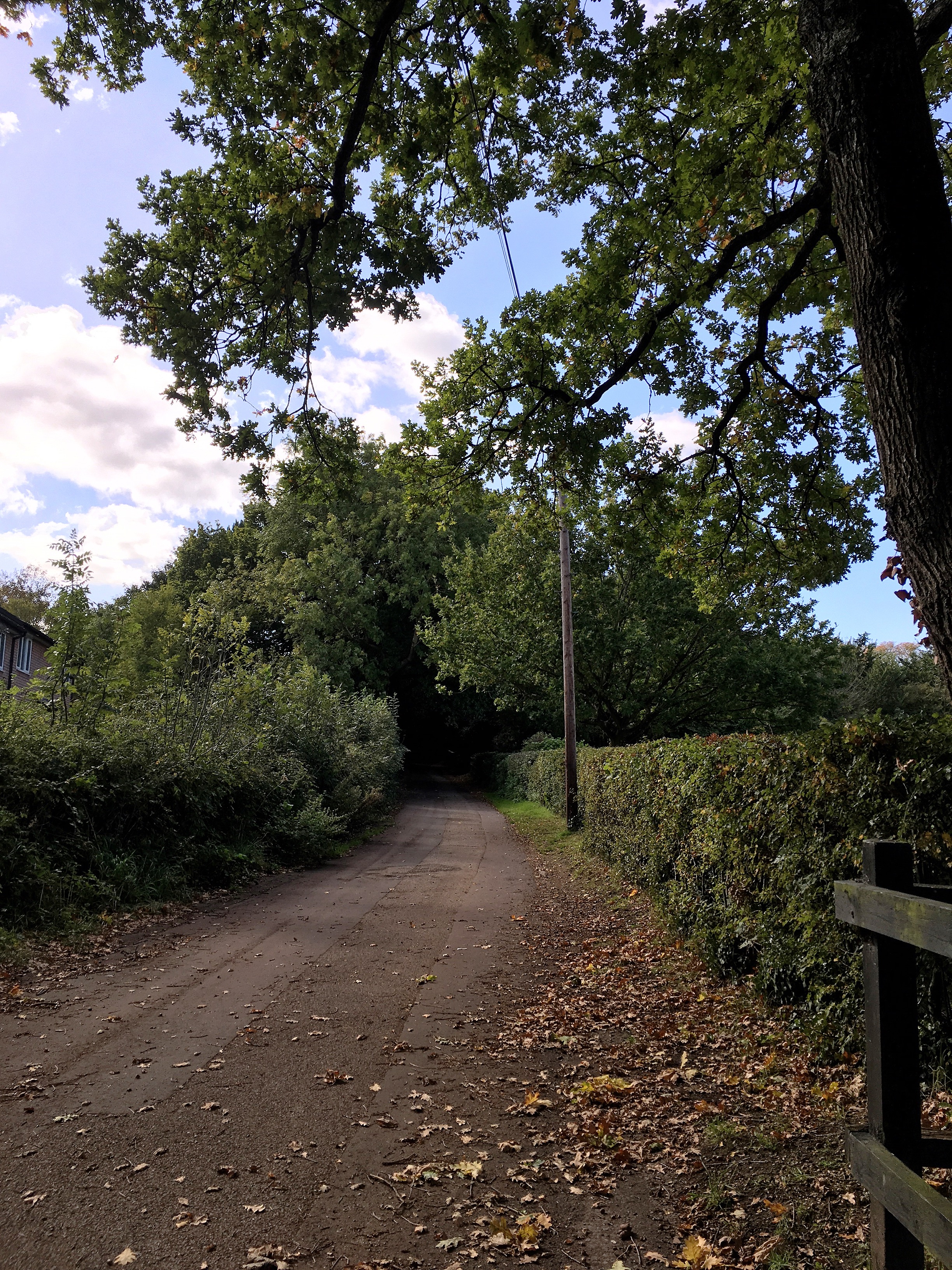 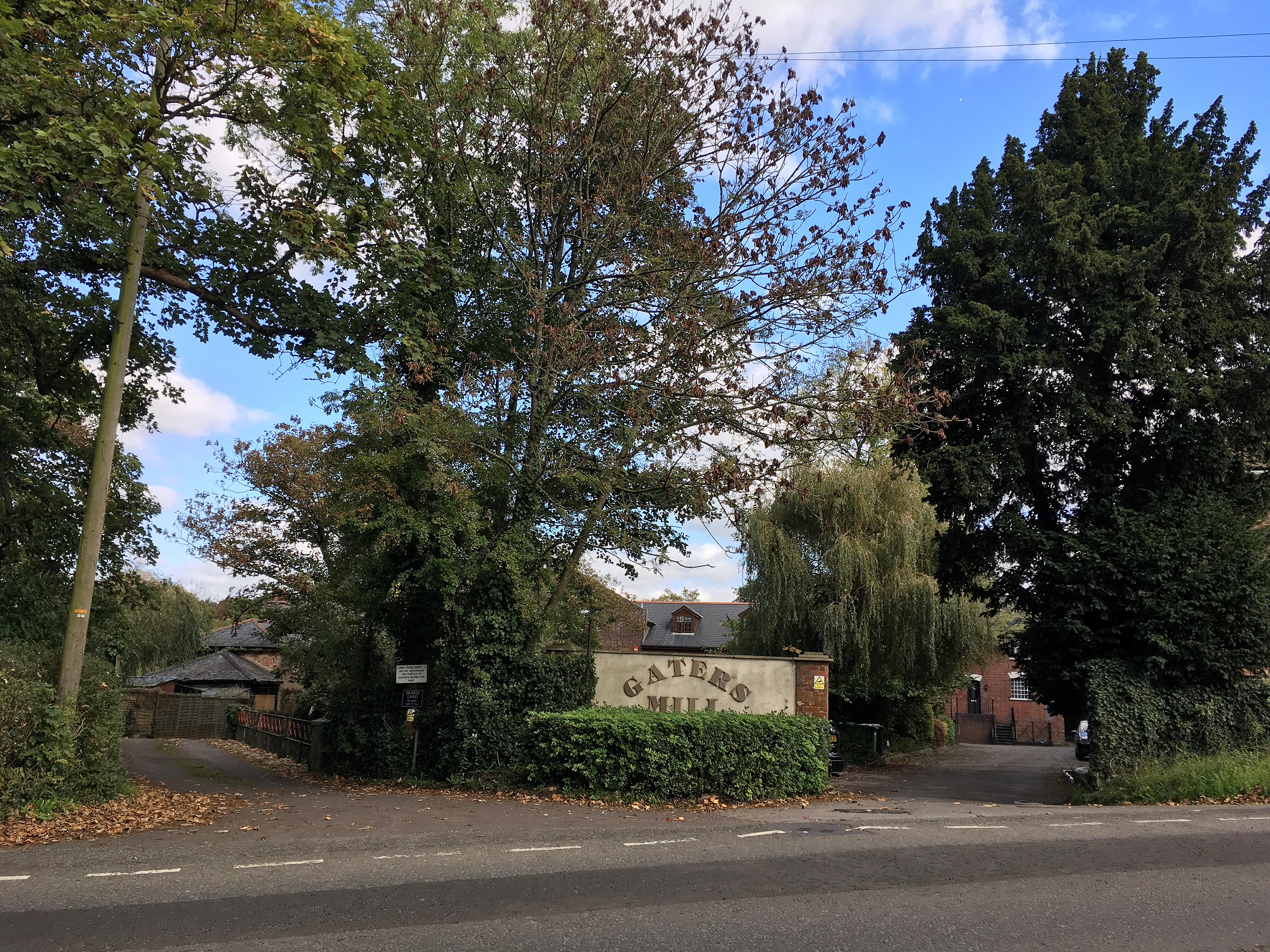 At the bottom of the hill Marhill Copse runs alongside the road. Usually when we walk this way we’re busy looking over at the river to our right. Today we looked towards the copse. On the face of it, it seems like it might be a nice place to walk but, as far as I can see, the whole area is boggy going on wet and I’ve never attempted to find a way in. The boggy copse covers a fairly wide area, bounded on one side by River Walk and stretching behind the playing fields on Cutbush Lane all the way along the road to Mansbridge. It has been called Marhill since at least 1333 and the name is thought to have come from the word marl, meaning earth dug out of the ground as fertiliser. Clay may have been dug there in medieval times to strengthen the banks of the river or to improve the land as the name suggests. 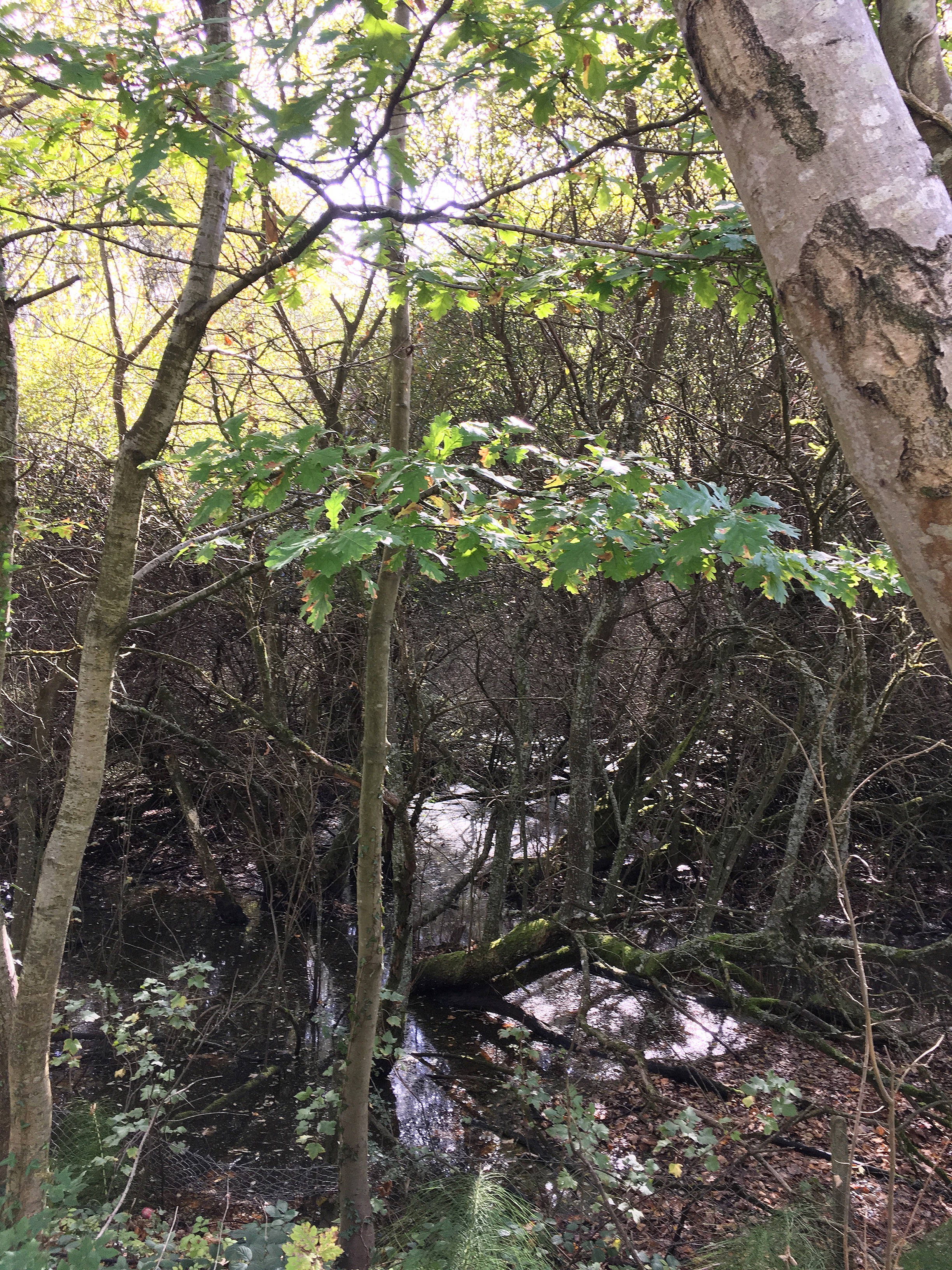 All along Mansbridge Road the copse is fenced so there’s no way in and. Even if there was, you’d need wellie boots at the very least, maybe even waders. When we reached the river though, we decided to have a look at the copse from the other side, where it runs along the perimeter of Riverside Park towards Woodmill. As I’d seen old maps showing paths I thought there might perhaps be a way in there somewhere. We walked to the end of the grassy area beside the bridge but all we found was an impenetrable bank of greenery, although we did get an unusual view of the bridge for our pains. 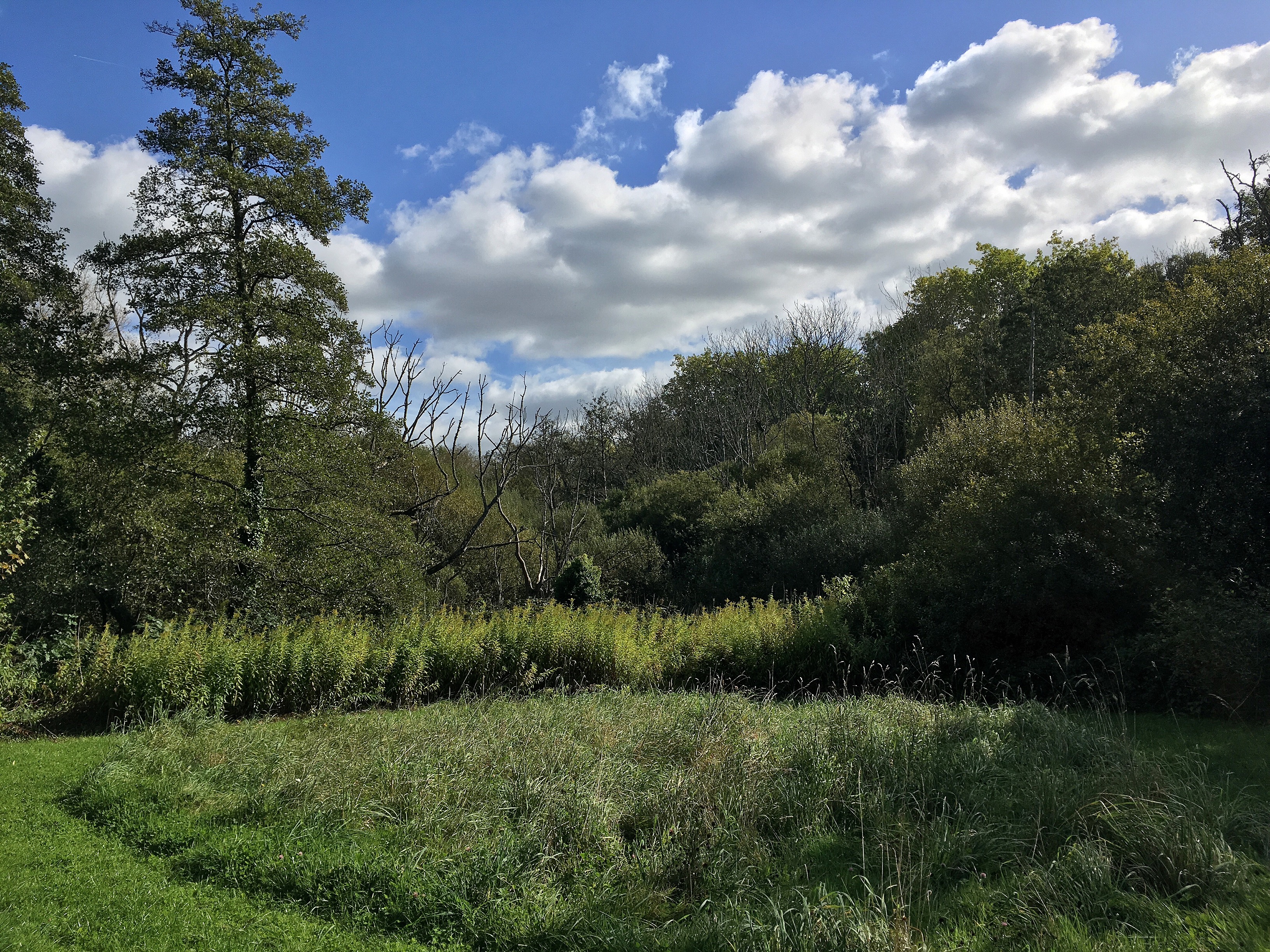 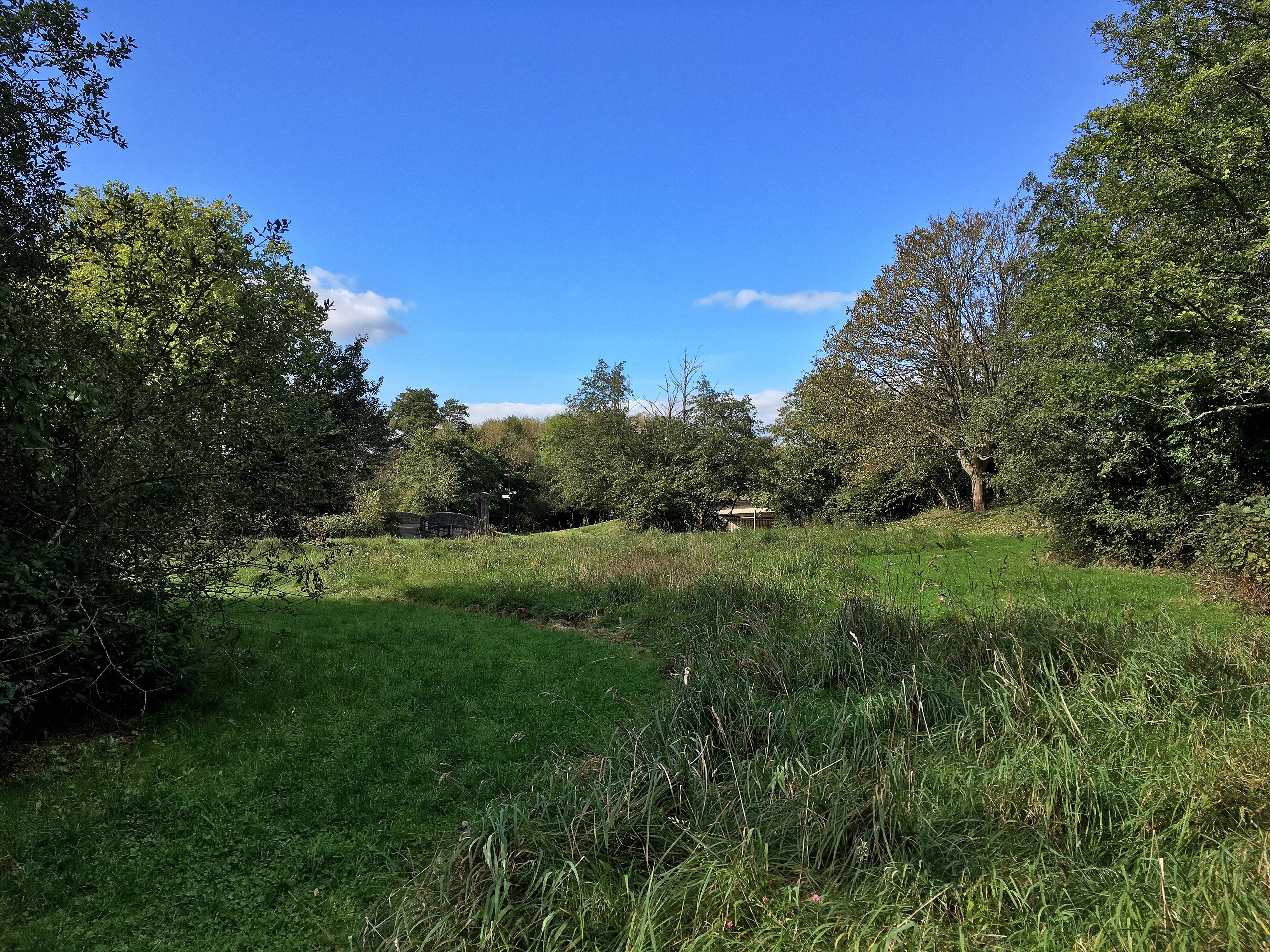 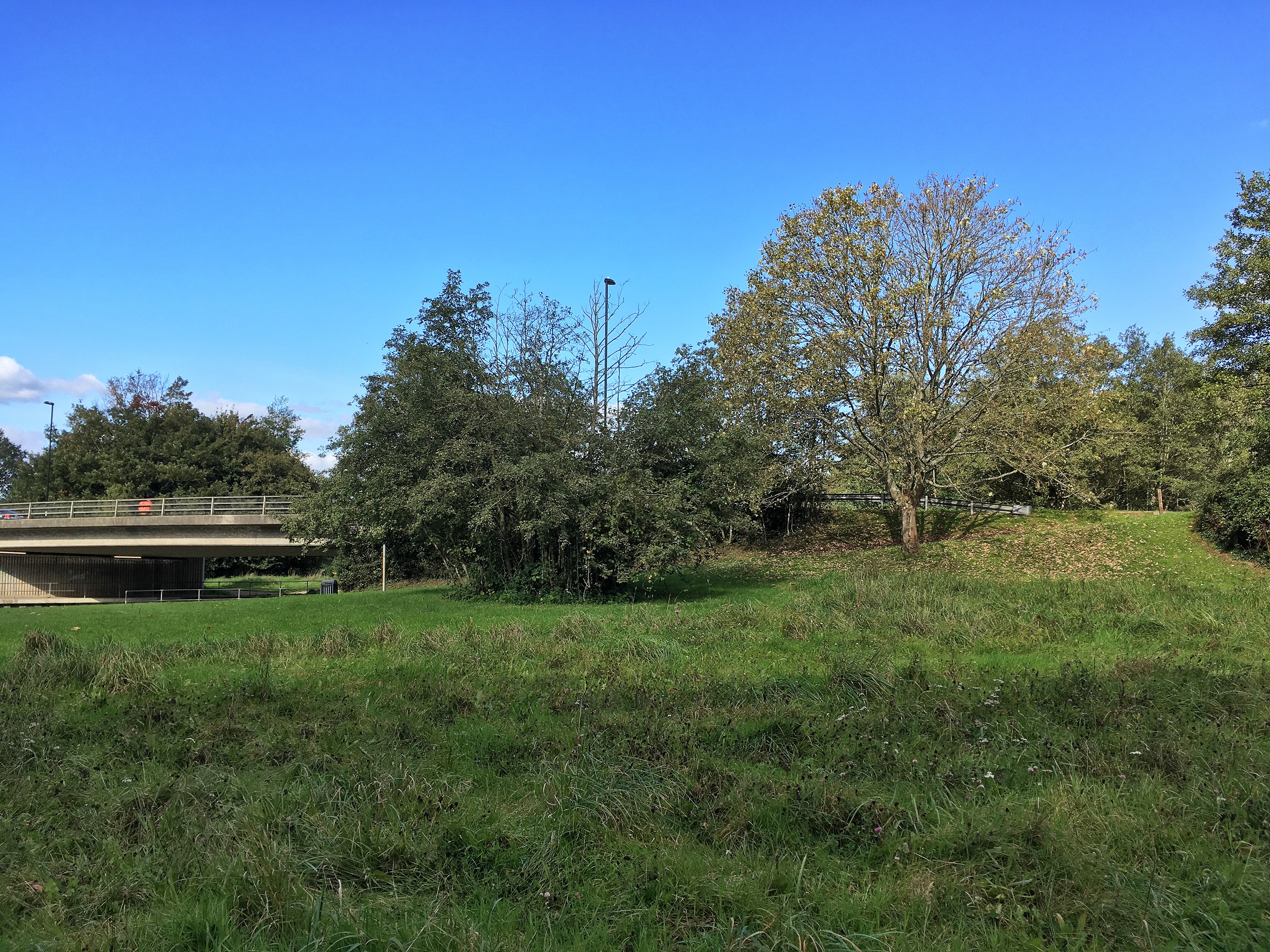 Walking back along the other side of the grass I noticed a gap of sorts between the trees and, with CJ behind me, pushed my way through. We didn’t get very far before we came to green, stagnant water. If there is a path here it’s well hidden and wetter than any I’d like to walk. Disappointed but not really surprised we headed back to the bridge and the usual path through the park. It was time to head for home. 4 thoughts on “A surprising discovery”