Given my cold and the need to keep fairly close to a box of tissues at all times, I didn’t think it would be wise to wander too far from home for my Sunday walk. After much umming and ahing and a little poring over maps I decided on Crosshouse. It fit in very well with last week’s walk and, if I got tired or ran out of tissues, I could wander up into town for a sit down. This meant I started off much the same as last week with a walk to the green and then across it. Still, even if you take the same walk every day there’s always something new to see and this was no exception.

Peering through the wire fence of the allotments I got a view across Chessel Bay that must make allotment owners here the envy of the gardening community. Through the morning mist I could see the stadium, the spire of St Mary’s and all the buildings and businesses huddled on the edge of the water. I wonder if there’s a waiting list somewhere I could put my name down on because I quite fancy myself sitting in a deck chair looking out at that view in the summer. A very lacy hydrangea flower left over from summer made me smile as I cut through towards the green and I carried on smiling and planning out my allotment as I sniffed my way along Sea Road heading for the New Bridge. Most of the planning involved the best place to put my deck chair rather than anything I might actually grow. As I wanted to cross the bridge this time rather than walk under it I took the route I used to take when I worked at Silver Helm. For a while it felt like a walk to work minus the thinking about turnaround dates and schedules that usually went with those. Walking through the houses and flats that have replaced the bombed out cottages of Itchen Ferry I noticed a sculpture in the little play park. Whether this is new or it’s been there all along and I’ve missed it is a mystery but it’s just like the ones I found in Holyrood on those far off lunch time wanderings. Of course I went for a closer look and found a ferryman holding an Itchen Ferry boat. Perhaps there are more all over the city.

From there I crossed the railway bridge and climbed the steps onto the bridge. There were encouraging signs of spring to make me smile, buds on the trees beside the steps that will be blossom soon. Looking over the side I could see the route I’d taken last Sunday. Seagulls flew around my head, close enough to reach out and touch as I looked over the remaining cottages of Itchen Ferry. Last week I thought the little green and cream houses were the only two left but I’m told the two narrow houses beside them are also survivors. Had I known where to look a little bit of wall right next to them is all that remains of the original village pub. Sadly, that will have to wait for another day when I’m on the ground not up high with the gulls. 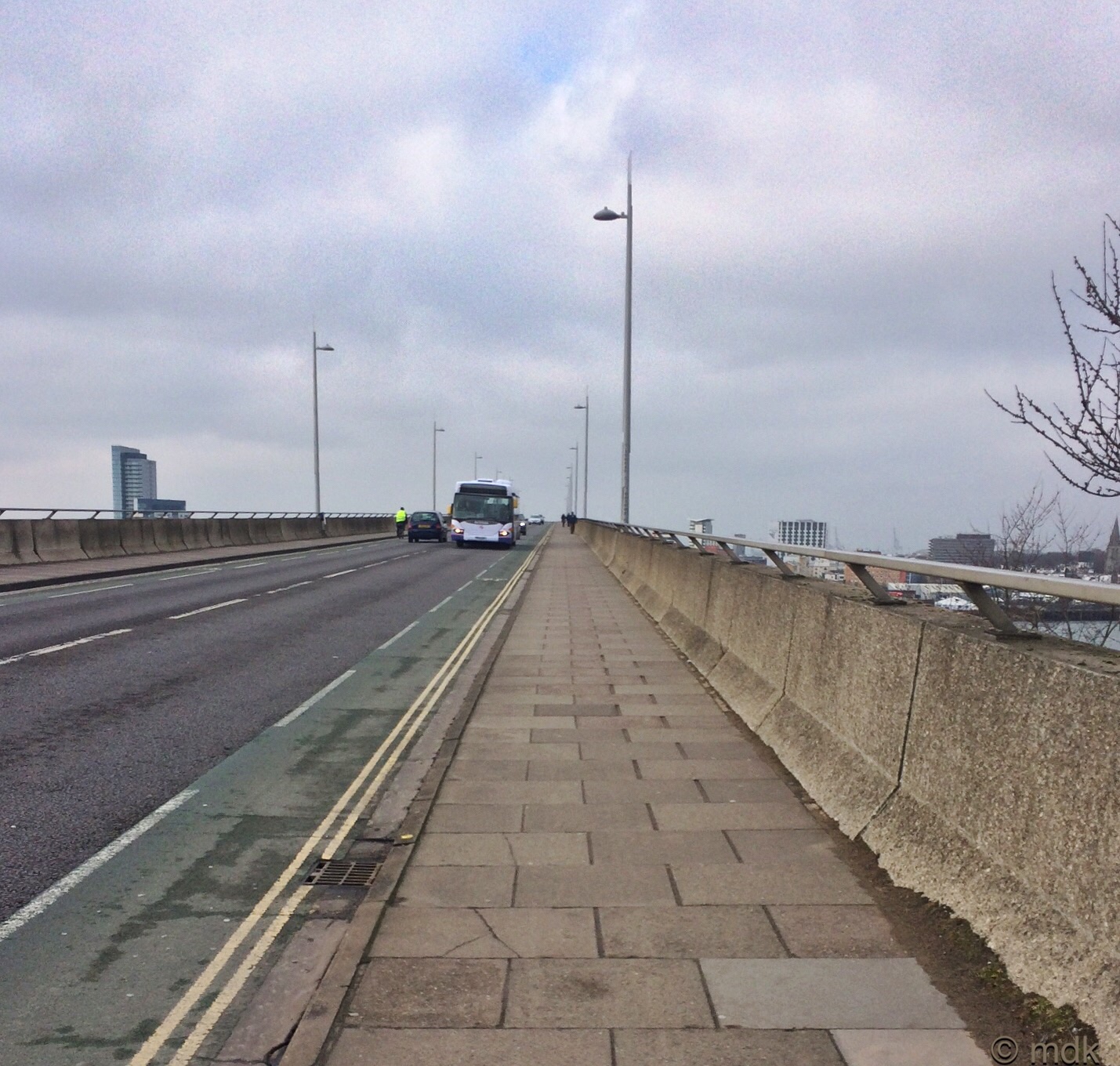 Far below the swans were tiny dots on the old Supermarine slipway. The span of river between the Itchen Ferry Village slipway and the one on the opposite bank seemed far smaller than I’d thought but I suppose, on a wet windy day on a choppy river, it must have felt like a million miles for those poor ferrymen. Before long I could make out the conical roof of Crosshouse on the far bank. This little stone building is something I’ve been meaning to visit for a long, long time. Quite why I’ve never got round to it until now is a mystery. Maybe it’s because it’s tucked away off the beaten track and I’m usually on the way somewhere else when I walk across the bridge. Seeing it from the bridge and getting to it on the ground are not the same thing and I’d fully expected to get lost but it was surprisingly easy to find. 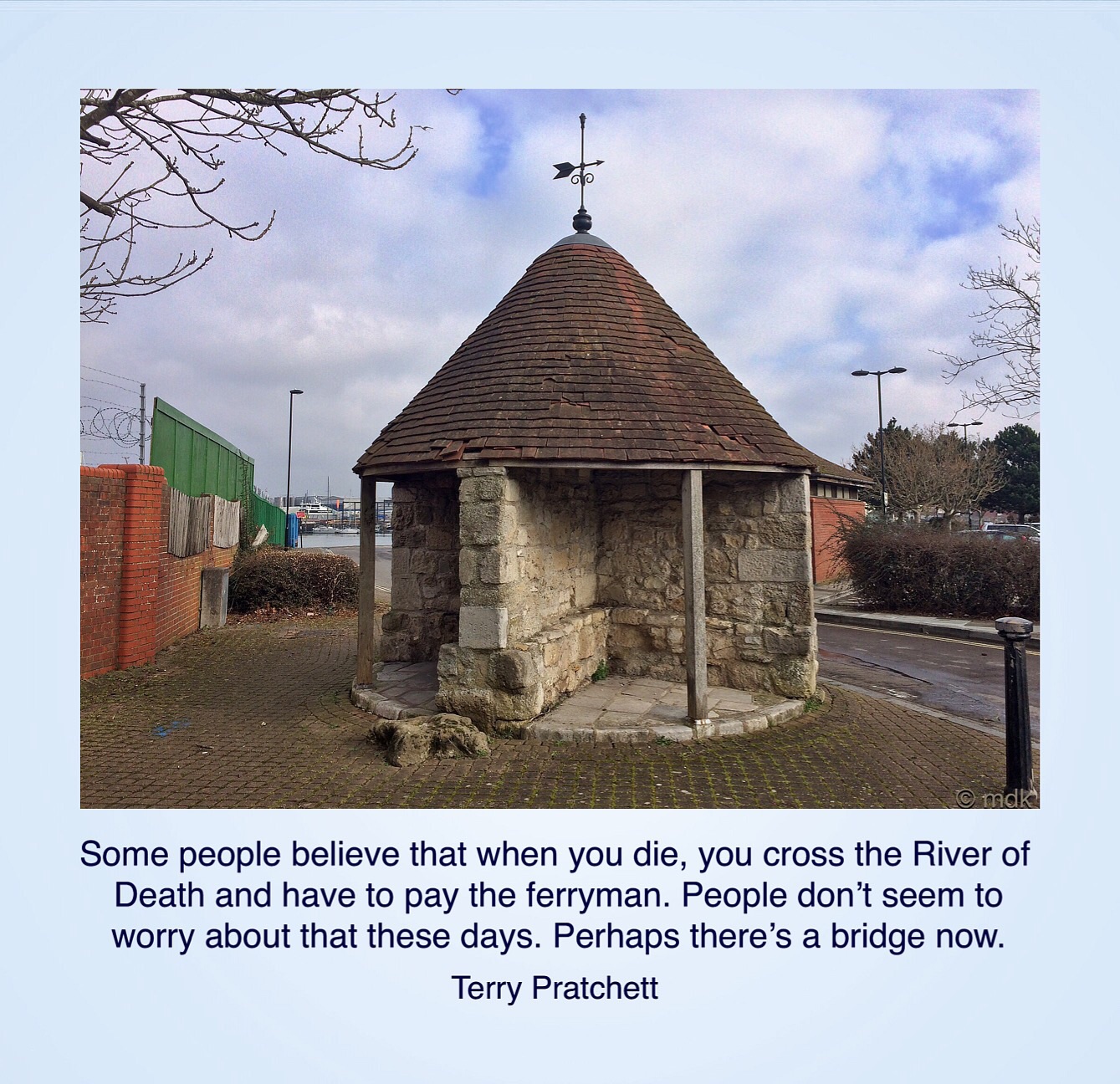 For such a tiny, unassuming building it certainly has a rich history. Dating from medieval times, it was used as a shelter for people waiting for the ferryboat to arrive and is said to have been built on the base of the old Itchenworth (Itchen  Ferry) boundary cross.  Beside the building is a curious, vaguely cross shaped lump of stone covered in moss and I can’t help wondering if this is actually the boundary cross. The little circular house is divided into quardrants by two crossing internal walls and has a narrow stone shelf that may or may not have had wooden seats on top. If not, it must have been uncomfortable perching on those uneven stones. Either way the shelter of the walls and the conical tiled roof would have been welcome on a wet, windy day. Amongst all the villagers from both sides of the river who waited at this spot there are some famous names. Not least of these is King Charles II, although I somehow doubt he had to use the shelter or had to spend any time waiting come to that. In 1662 Samuel Pepys used the ferry and Jane Austen was a regular customer for the Itchen ferrymen. In 1808 she wrote about it in a letter.

‘We had a little water party yesterday; I and my two nephews went from the Itchen Ferry up to Northam, where we landed, looked into the 74, and walked home, and it was so much enjoyed that I had intended to take them to Netley today….if we cannot get so far, however, we may perhaps go round from the ferry to the quay.

I had not proposed doing more than cross the Itchen yesterday, but it proved so pleasent, and so much to the satisfaction of all, that when we reached the middle of the stream we agreed to be rowed up the river; both boys rowed great part of the way’

Over the years there have, of necessity, been many repairs and one, made in 1634 is commemorated by a stone beautifully carved with the thirteenth century coat of arms, the date, what appears to be a barrel and the letters H and S intertwined. The stone also bears the initials P C after the Mayor of the time, Peter Clungeon. It struck me that I’d seen something a little like it before but, right then, I couldn’t think where. Above the cross shaped stone I’d noticed another stone with a date, 1988, obviously a far more recent repair, like the roof which is a modern reinstatement built using early illustrations as a guide.

This made me wonder if there there might be other inscriptions, graffiti even, from the people who’d stood around waiting. With this in mind I took a circuit of the building looking a little closer at the stones. There was evidence of a fair bit of damp in two of the quadrants, slimy looking algae in the inner corners and a rotting post on the side closest to the river. I imagine people chose where to sit depending on which way the wind was blowing at the time. Some of the stones had blue green staining, maybe due to copper deposits Deep inside. One in particular was specked with lichen but the light wasn’t good enough for a close up. The only other stone I found with words was high, close to the apex of the roof. At first I didn’t realise what they said and, when I did, the answer wasn’t as interesting as expected. This stone is most likely a relatively modern repair and the engraving is almost certainly an instruction on where it is to be put. 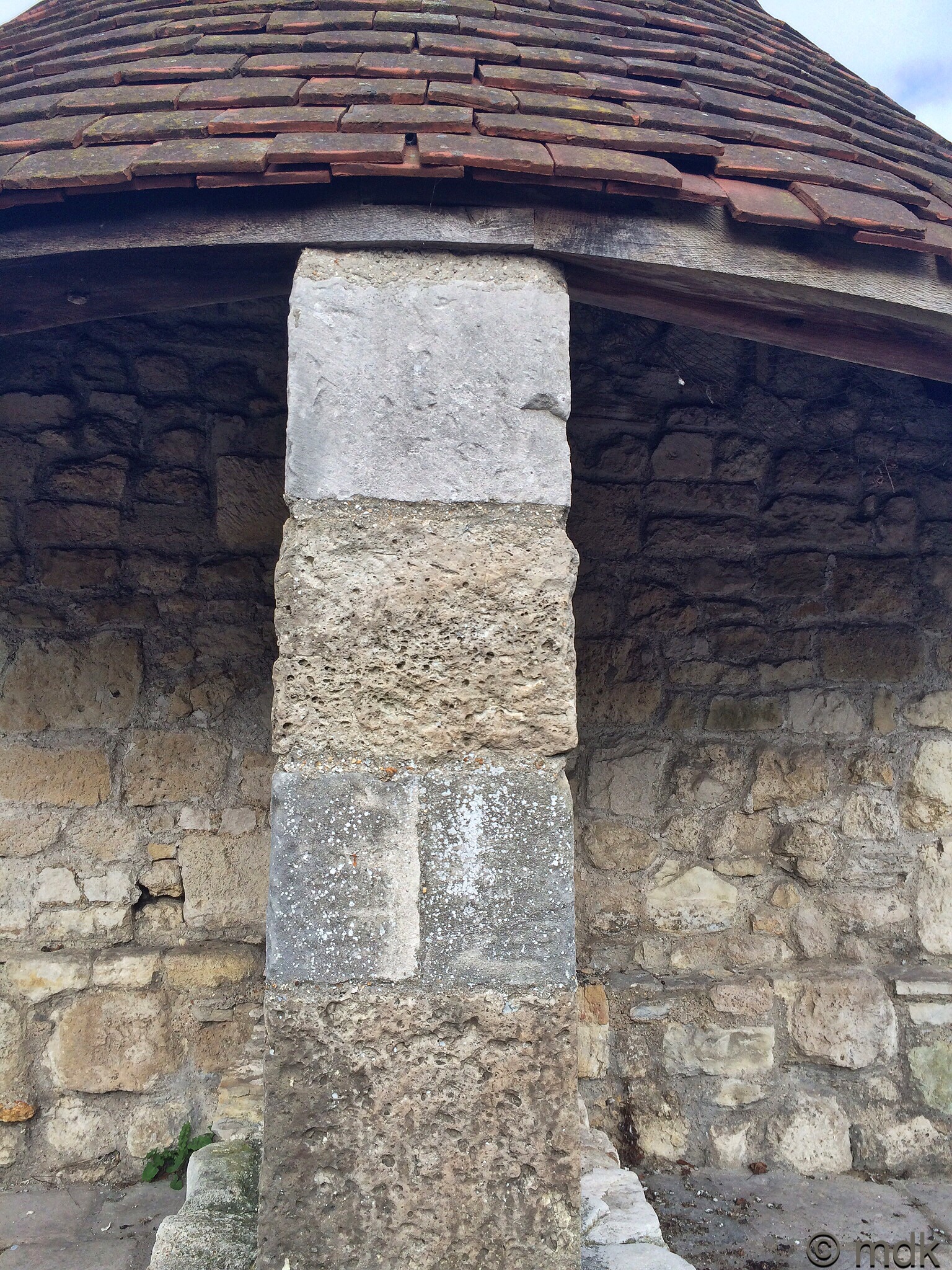 As I made my circuit I spotted a rectangular stone a few feet away on the city side of the building. A closer look reminded me where I’d seen the lettering on the repair stone before. It was an exact replica of a far more weathered stone I found along the shore, close to East Lodge. At the time I’d wondered what it was but had never been able to find any information.

This time I had more luck. A picture posted on the Southampton Heritage Facebook page pointed me in the right direction and a little more Googling told me these are modern day boundary stones placed by the council in 1988. Apparently there are twelve of them, carved in the council workshops and sited at significant points along the city boundary. The S and H stand for Southampton or Southampton and Hampshire, as for the barrel, it may be something to do with the barrels of the ancient docks. It might be fun hunting them all down.

Before I left I wandered down to the water looking for the Itchen Ferry slipway. It wasn’t hard to find and slip was the operative word on the slimy wet concrete. I began to walk down towards the water and then thought better of it and crossed over to the shingle. When I got there I realised this was actually another, far older, slipway, most likely used by the original Itchen Ferry. Sticking up from the centre line some rusty spikes of metal puzzled me, as did some large concrete blocks with a rusty metal pole on top. Maybe if I knew more about boats, I’d know what they were for. 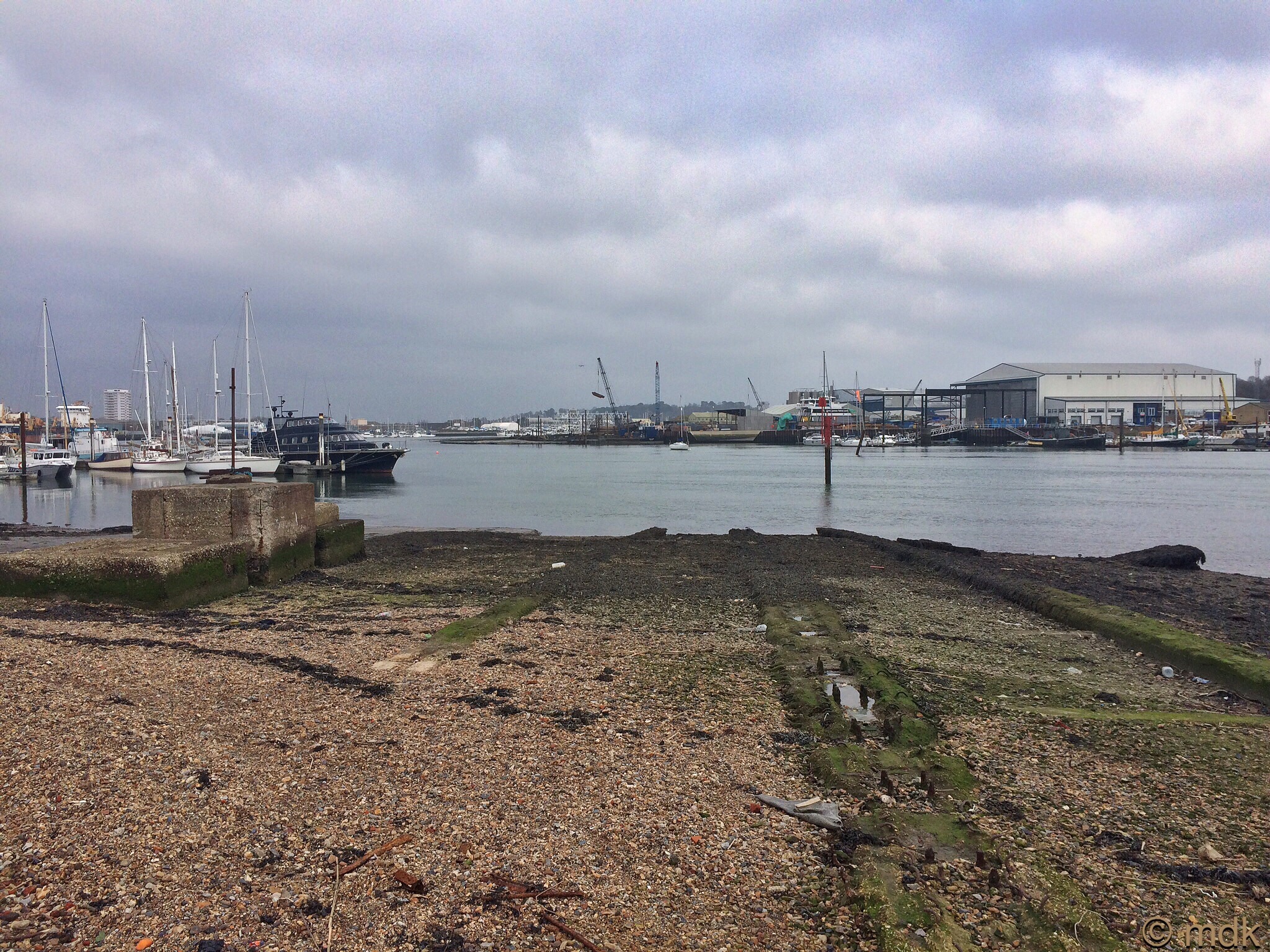 For a while I stood gazing out across the river at the remains of Itchen Ferry Village. There were rowers racing across the water and, to my right, the graceful curve of the Itchen Bridge silhouetted against a moody cloudscape. Originally I’d planned to walk along to the floating bridge slipway which I knew was nearby but I wasn’t sure exactly how to get to it and it looked like rain. Besides, I needed more tissues and a caffeine top up. There would be other days. 16 thoughts on “Crossing the river to Crosshouse”