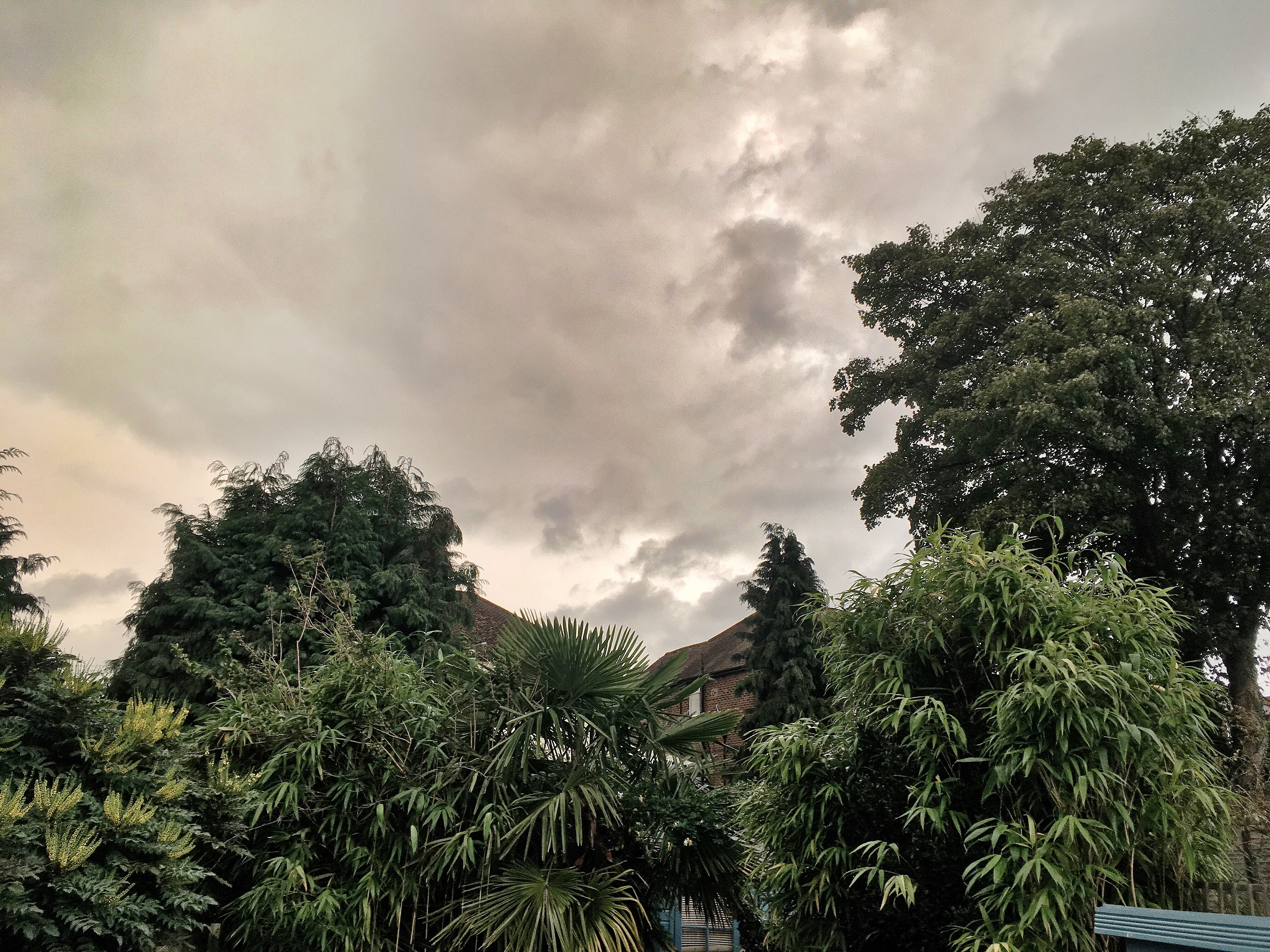 This morning was one of those dark brooding mornings when you need the light on and I was procrastinating, finding lots of little jobs in the house that didn’t really need doing to avoid going to the village. It wasn’t that I didn’t want to walk up the hill. What I was really avoiding was the imminent rain. Every time I glanced out of the window the sky looked so dark I was sure there was going to be a horrendous downpour pretty soon. When it came I didn’t particularly want to be out in it.

Eventually I couldn’t put it off any longer. It hadn’t yet rained but I was positive it was going to so I wrapped myself up in my arctic coat, the most waterproof thing I own, pulled on my boots, put a hat on my head and prepared to brave whatever Mother Nature chose to throw at me. When I got outside there was a mugginess to the air that made me regret the coat and the sky was like nothing I’ve ever seen before.  Now the dark clouds I’d seen through the window didn’t look like rain clouds at all. In fact it was the kind of sky that would once have had people sacrificing virgins.

The clouds were the most peculiar colour, pinkish brown with hints of green. I fished my phone out of my pocket and took a photo, knowing it could never truly capture the ominous sky hanging over the city. I’m not a particularly superstitious person but it made me feel uneasy. The quality of the light was so strange, dark but not stormy dark, and everything seemed to have a yellowish tinge to it, it felt like a portent of doom. For a few moments I felt like scurrying back inside and hiding.

Walking up the hill I wondered if something bad had happened I didn’t know about. It seemed a sky like that had to mean something. It looked like the backdrop to a post apocalyptic film. If the world was about to end, walking up to the village to pick up Commando’s prescription seemed fairly pointless but I kept plodding up the hill anyway, stopping now and then to take photos. 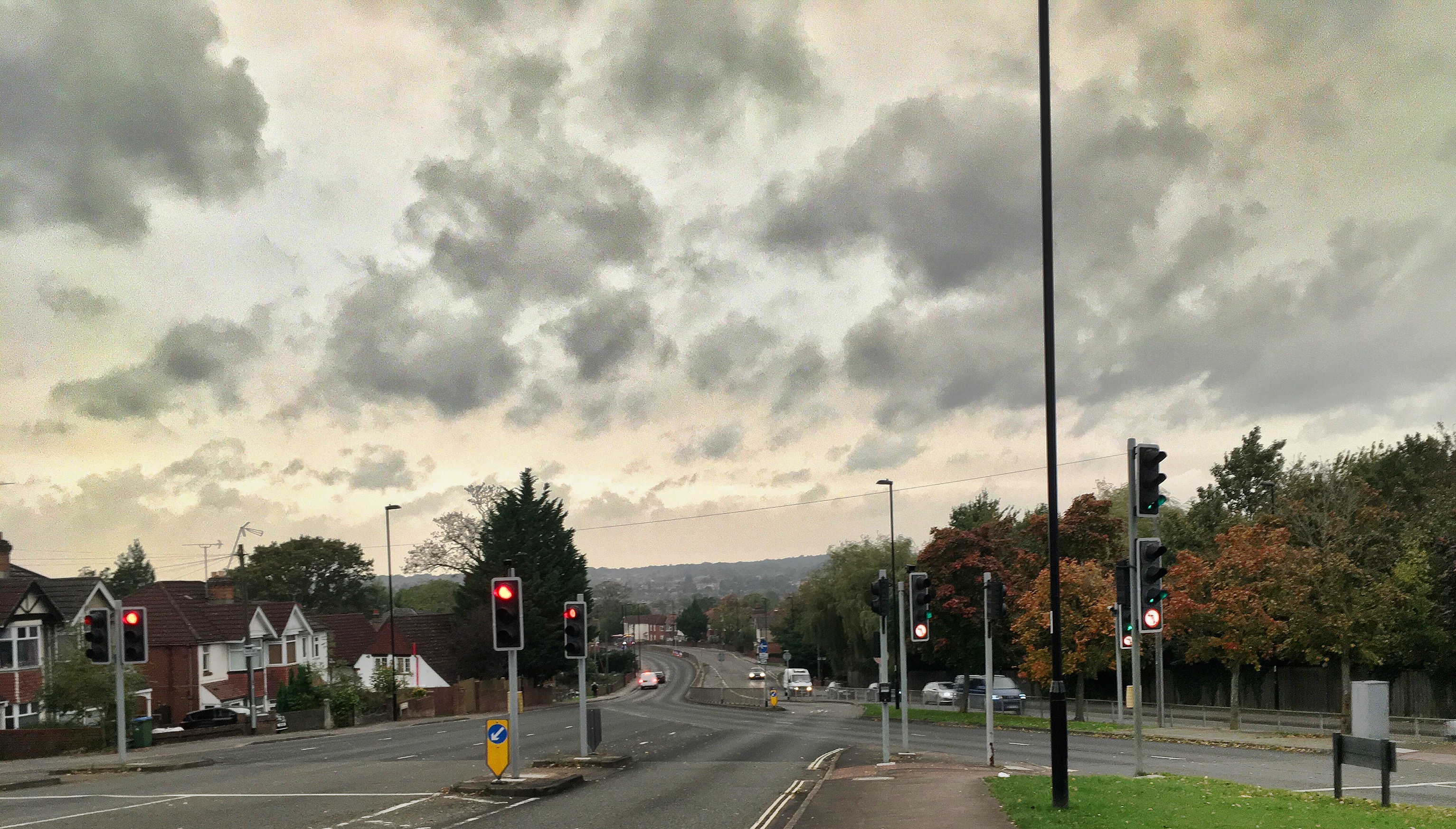 It was the middle of the day but the cars had their headlights on and it felt like dawn or dusk, minus the golden light. On I plodded, my imagination running wild. If the village had been filled with triffids or zombies or grey skinned aliens with big, glowing eyes I’m fairly sure I wouldn’t have been surprised.  As it was, all I found were the usual assortment of people wandering about with shopping bags. There seemed to be less of them than normal and everyone I passed was looking nervously at the sky. 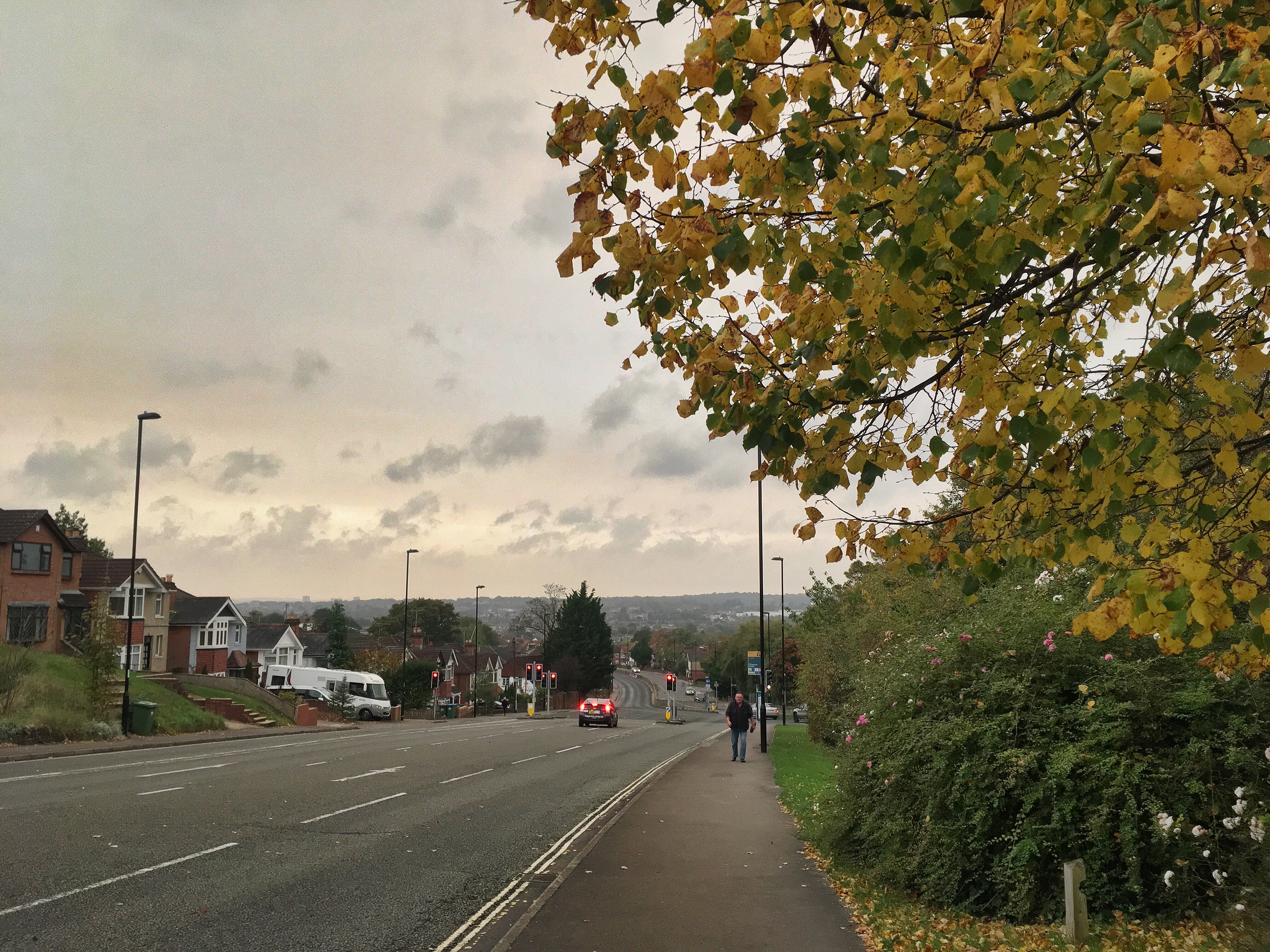 In the supermarket, when I paid for my milk and newspaper, the cashier asked me if the sky was still weird.
“It frightened me half to death on my way to work,” she said when I told her it was. “It looked like the end of the world was coming. The news has been full of Trump threatening the Koreans with Armageddon. You never know these days.”
The same thought had crossed my mind as I walked up the hill.  If there had been a four minute warning though, I’d missed it, probably because I refuse to watch the news on the grounds it’s all too scary. Frankly, I’d rather not know.

The streets were quiet as I headed up to the doctors, but not quiet enough to make me think people were cowering in fall out shelters. There were cars on the road and a few shoppers walking around staring heavenwards. Above the normal clouds, where it should have been blue, was a veil of pinkish brown. If the world was coming to end end the powers that be were keeping it all very low key. Maybe they didn’t want mass panic? 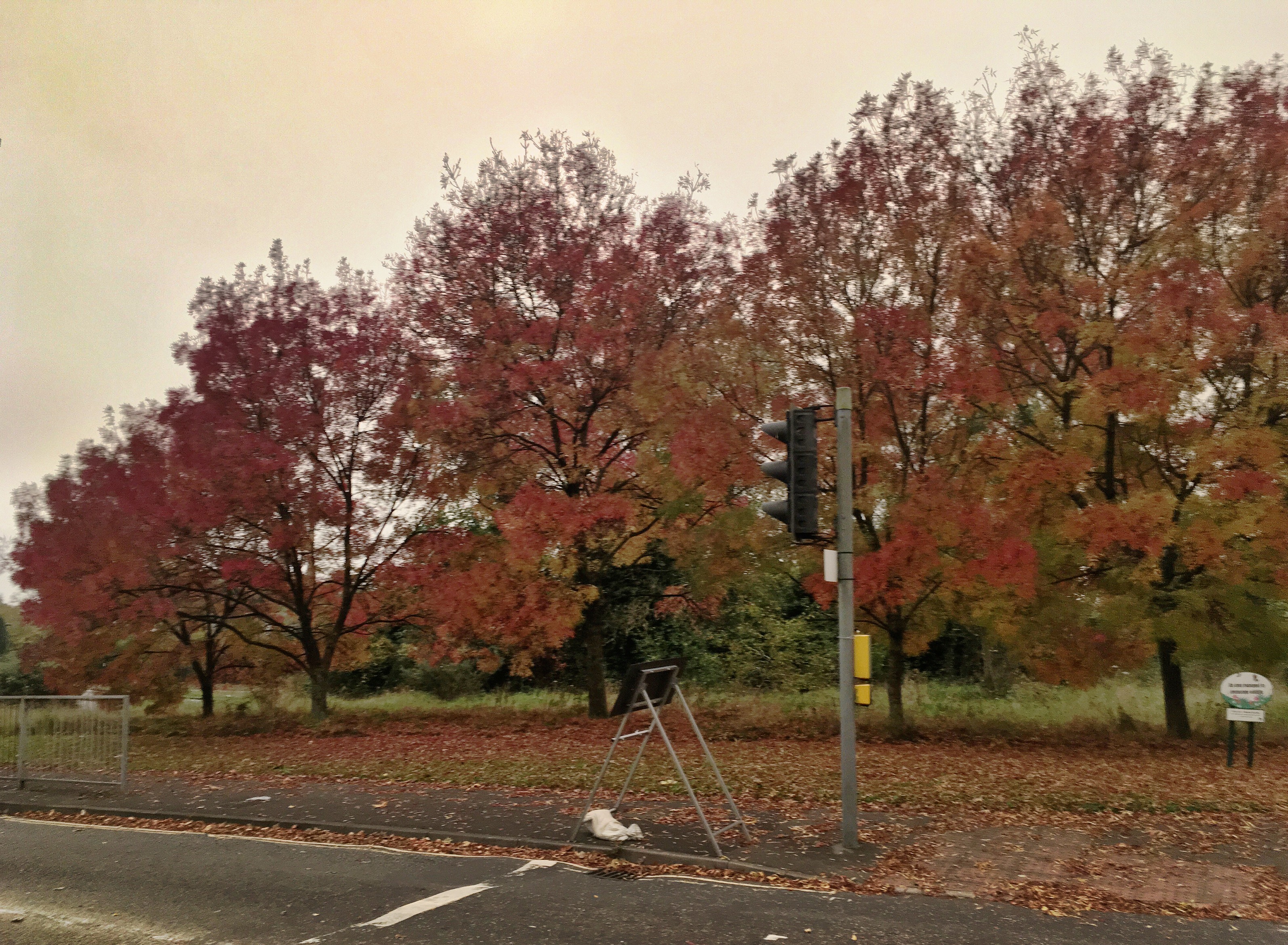 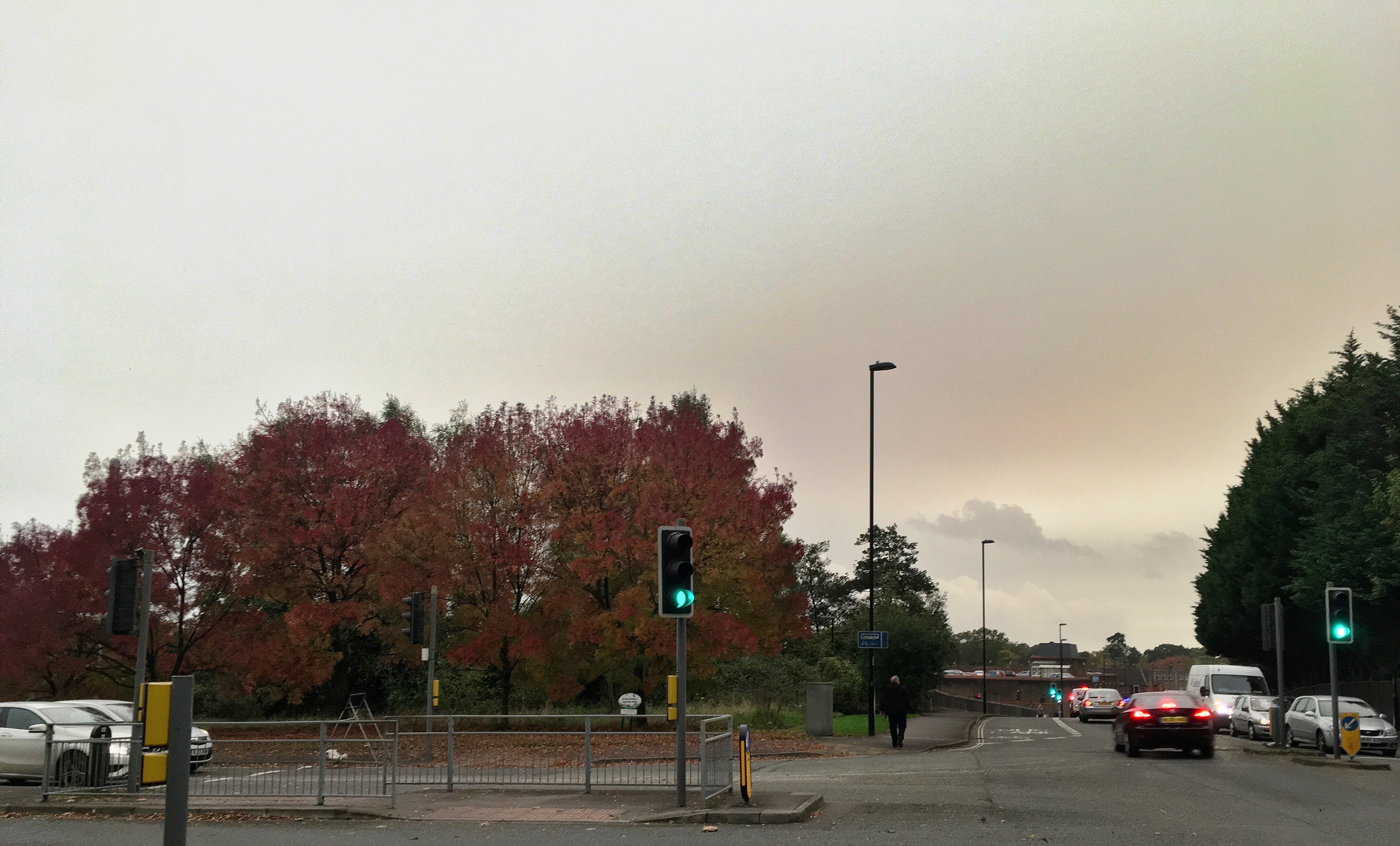 They were talking about it in the doctor’s too. From what I could hear the consensus there was that climate change was to blame. While I waited in the chemist shop for the prescription to be filled there were murmers about asteroids. Everyone seemed to have a theory but, whatever was causing the ominous sky, there was nothing I could do about it.

With my bag of shopping I crossed the road and began to head for home. Rather that go back the way I’d come, I thought I’d walk through Hum Hole. If the world really was going to end I might as well enjoy my last walk. It felt like early evening as I made my way down the hill towards the footpath. Whatever the cause of the sepia coloured clouds, they were doing a good job of blotting out the sun. 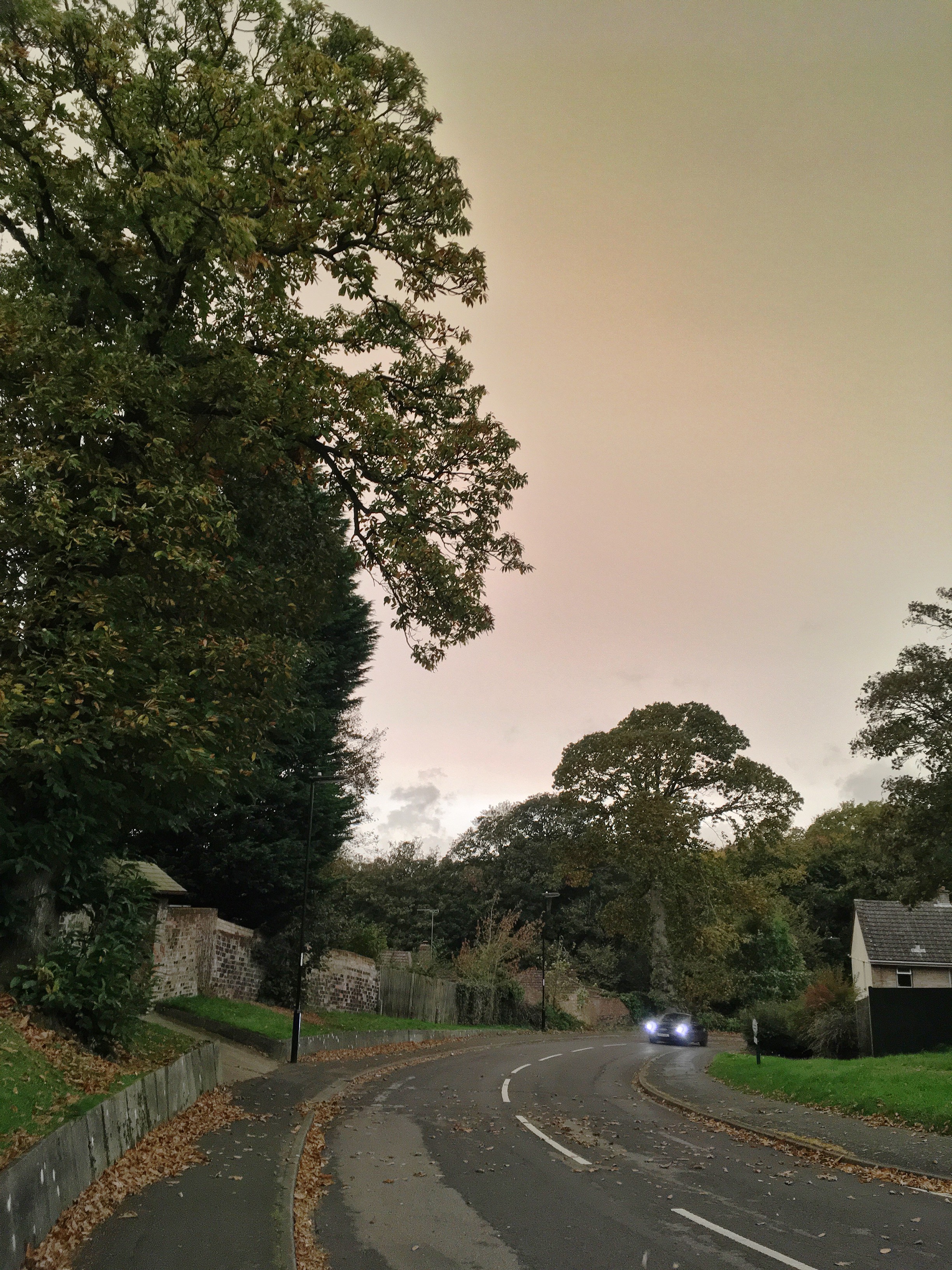 By the tall sycamore tree I turned off the road and headed into the wood. It was far darker than I’d expected and, for a moment or two I wondered if I should have stuck to the road but I kept going forwards anyway. 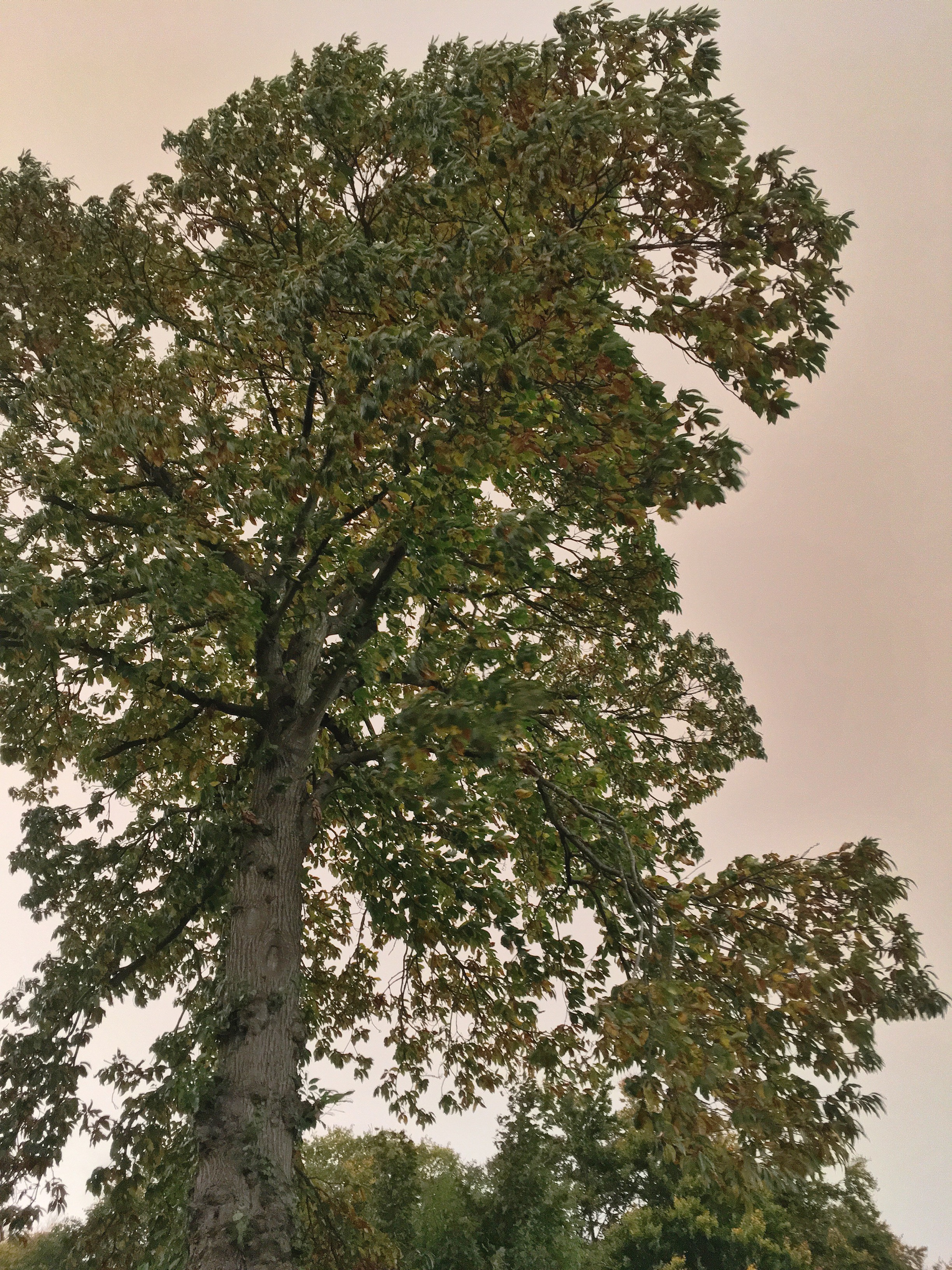 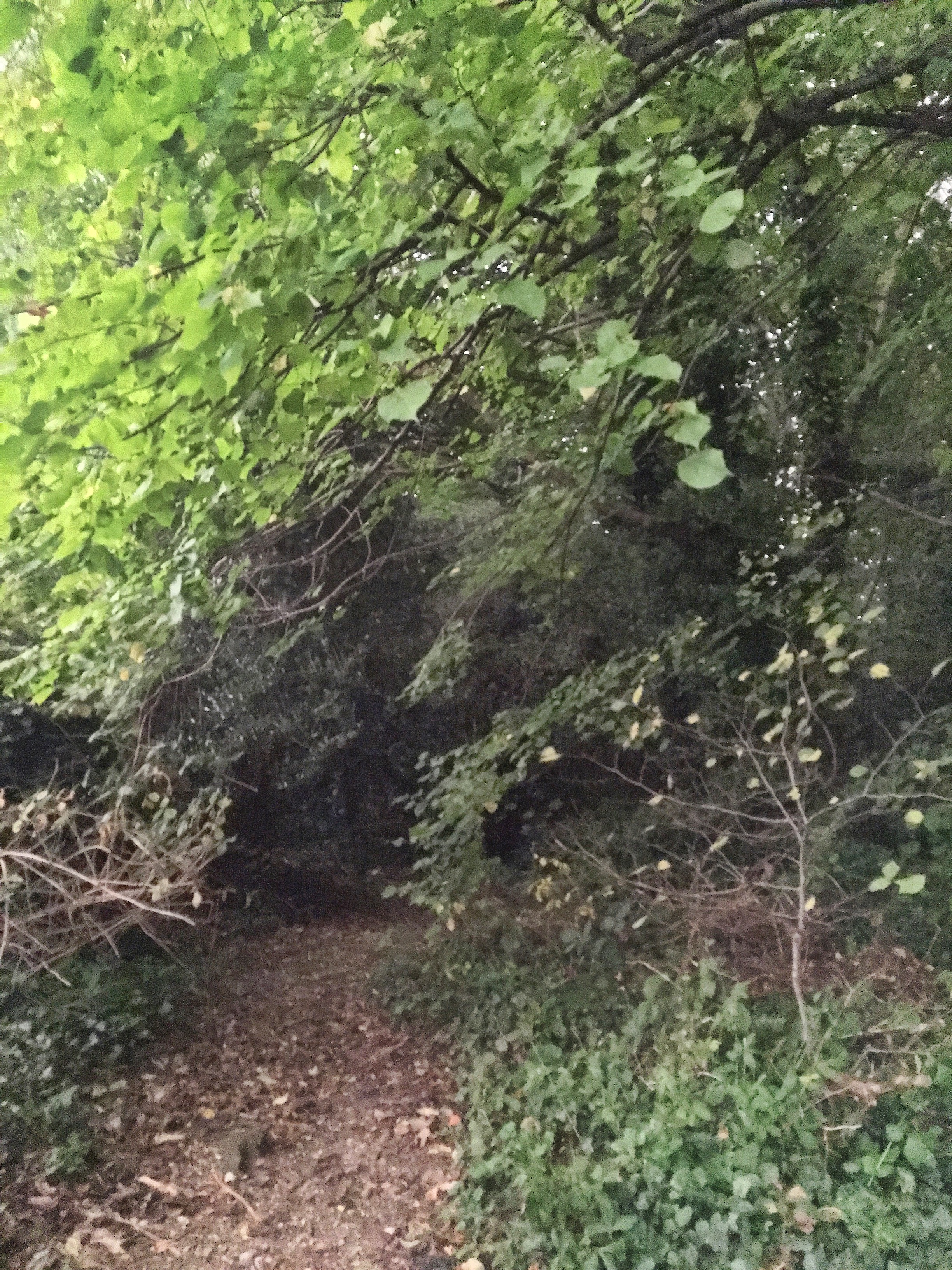 The woodland trail was eerily quiet. No birds were singing and the only sounds were my breath and my feet crunching on the fallen leaves. Now I couldn’t see the sky at all but the semi darkness and the peculiar colour of what light there was made it a spooky walk. 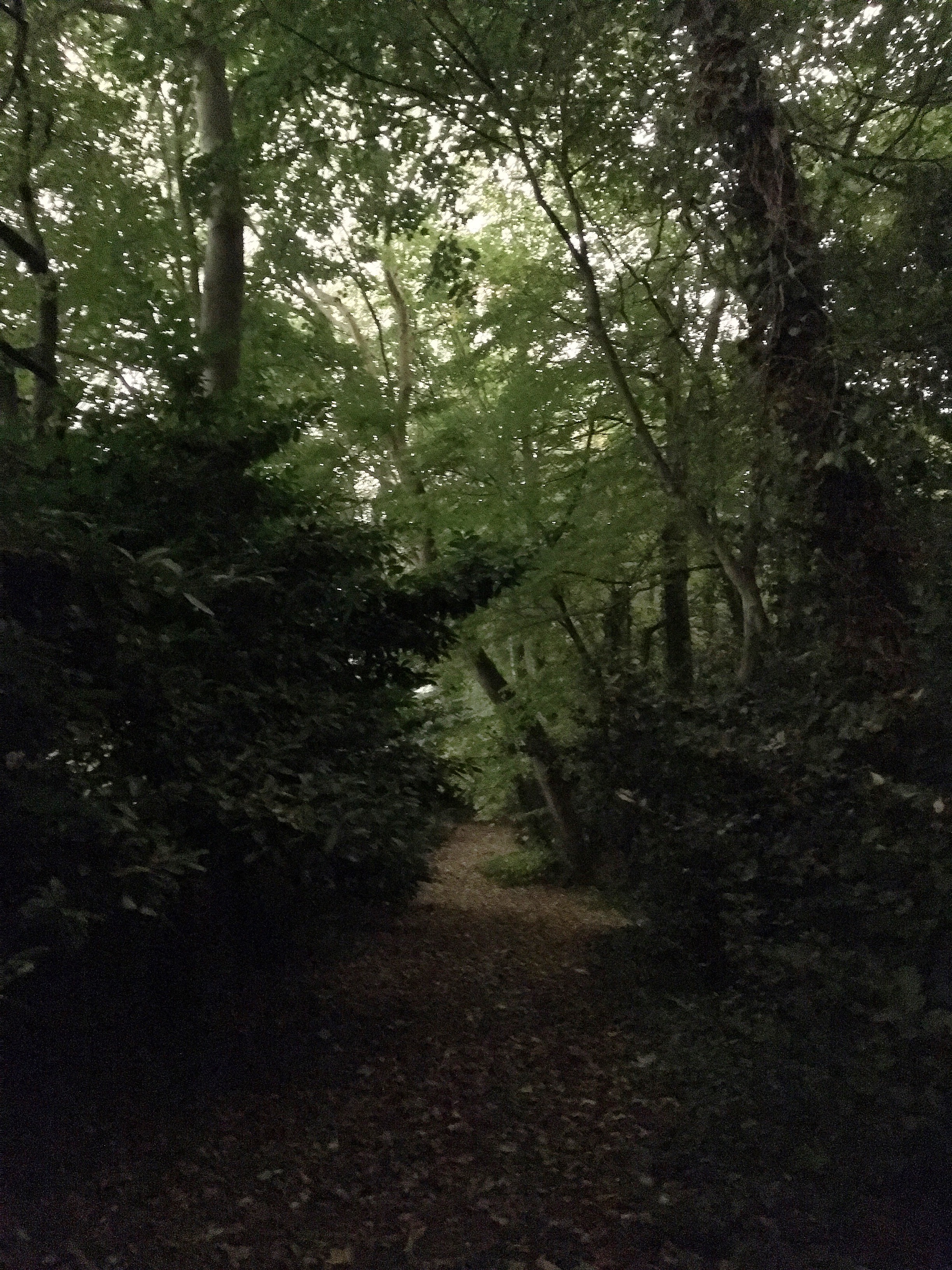 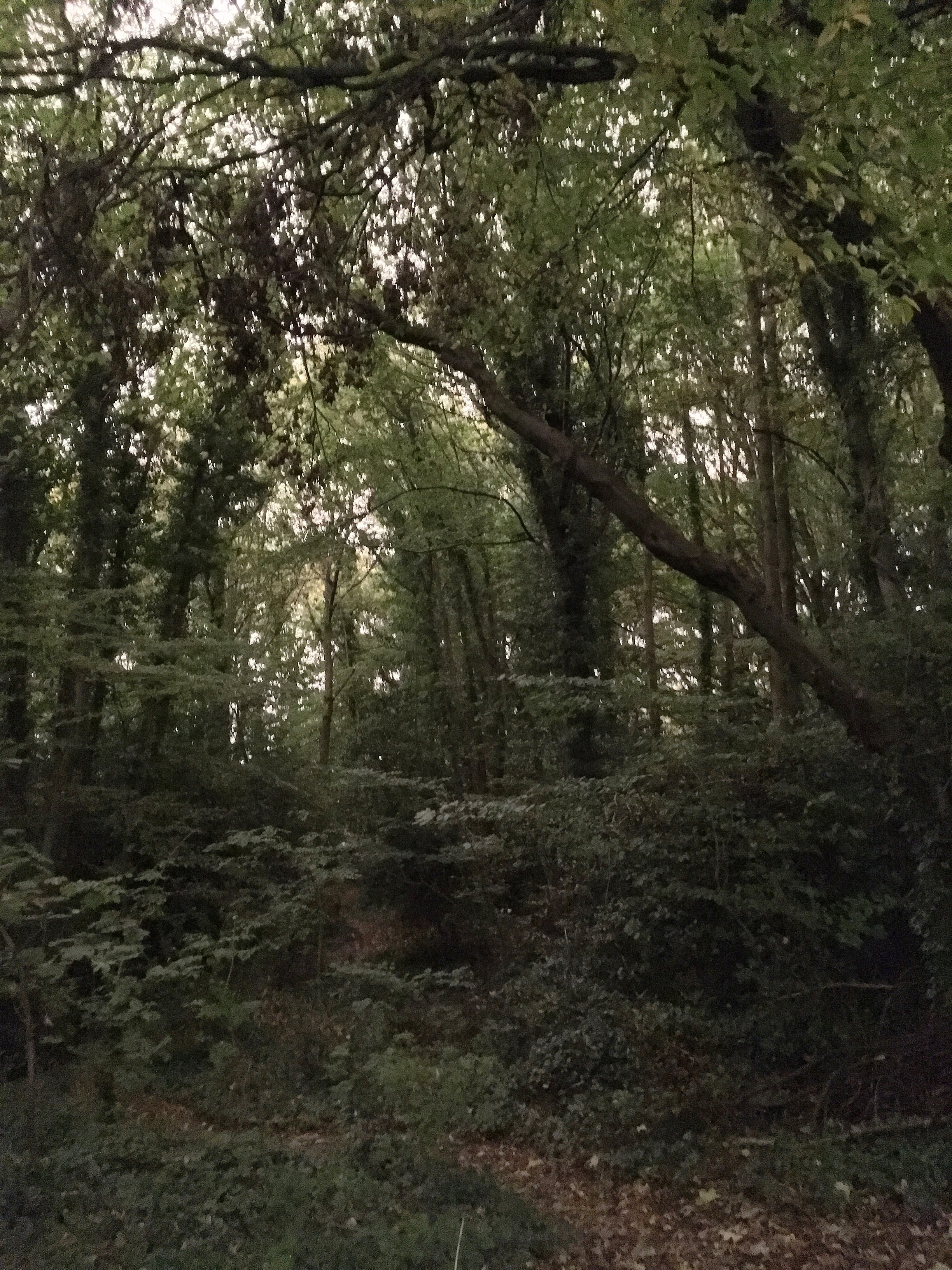 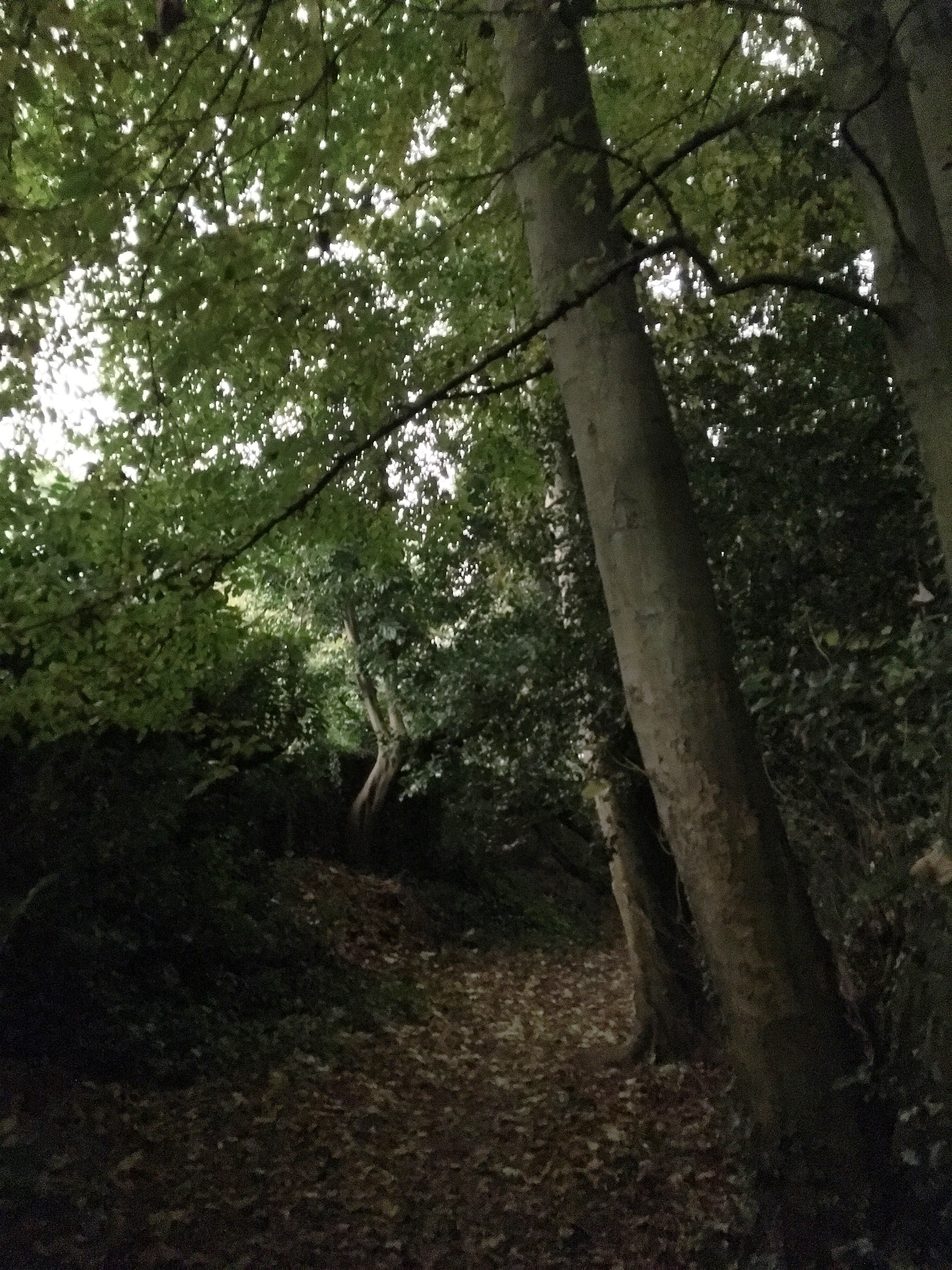 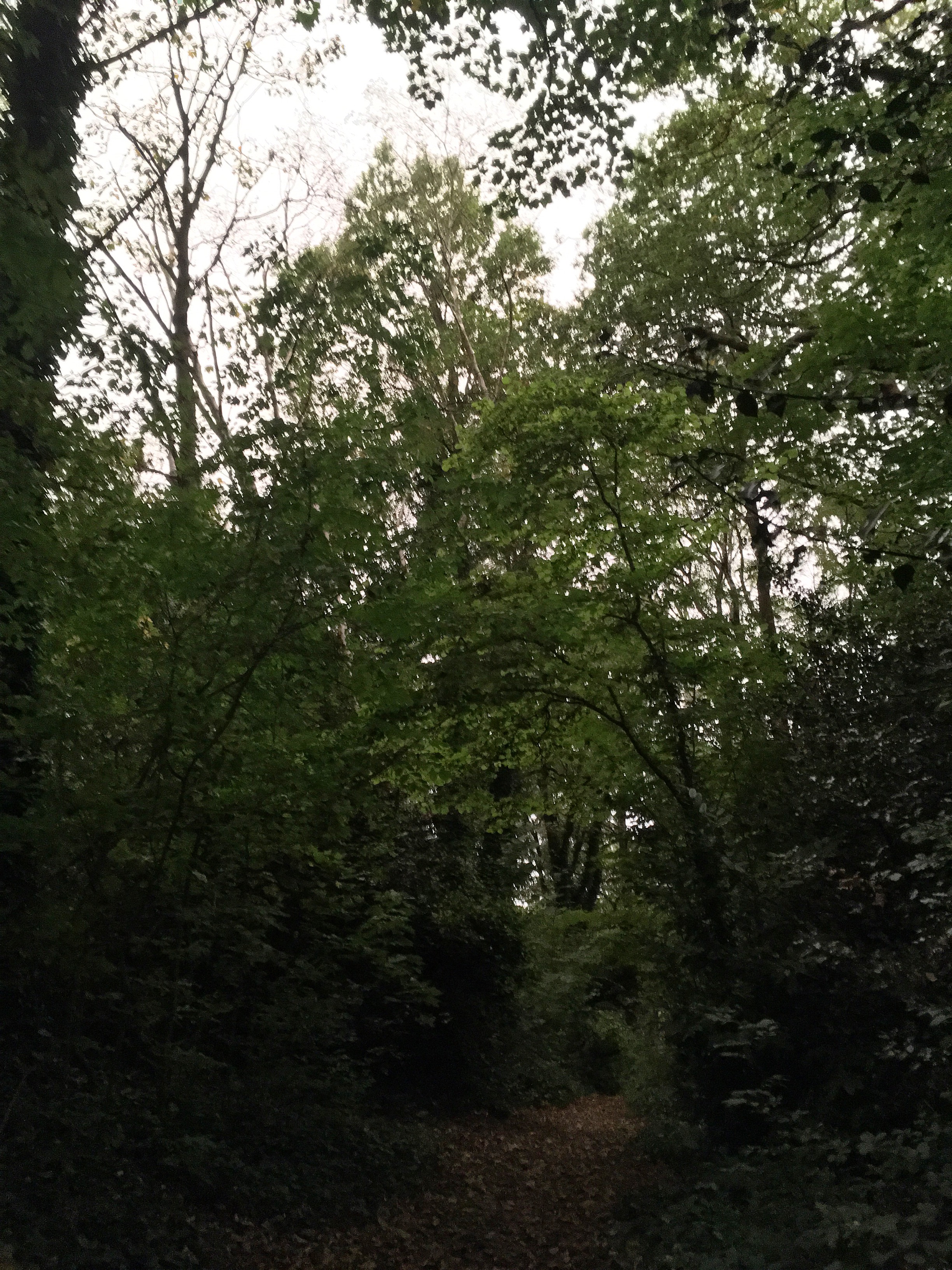 When I came to the edge of the glade in the centre of the wood it got a little lighter but the sky above was still the most unusual colour. With one eye on the sky I walked along the circular path and down into the dip that gives the area its name. 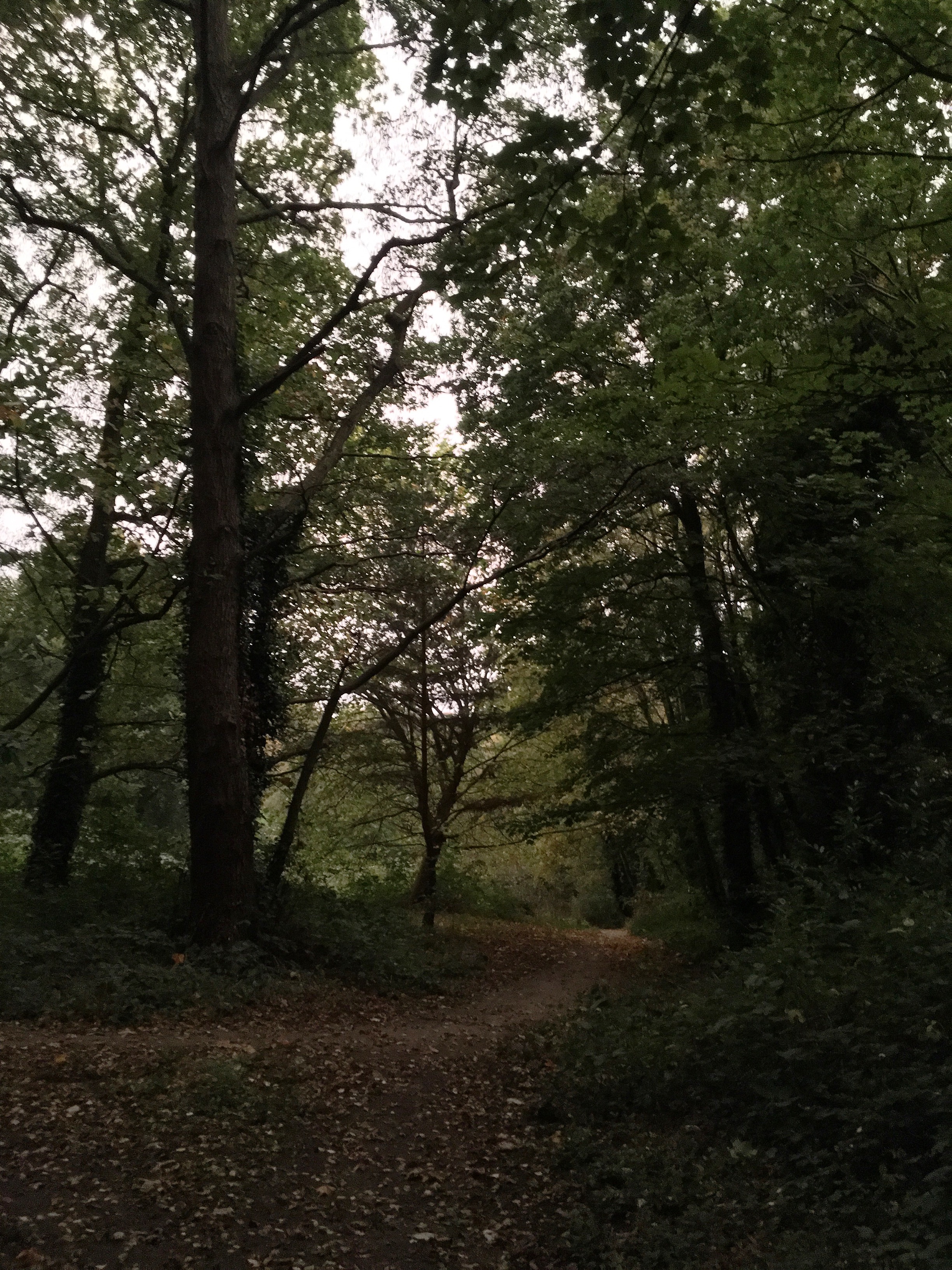 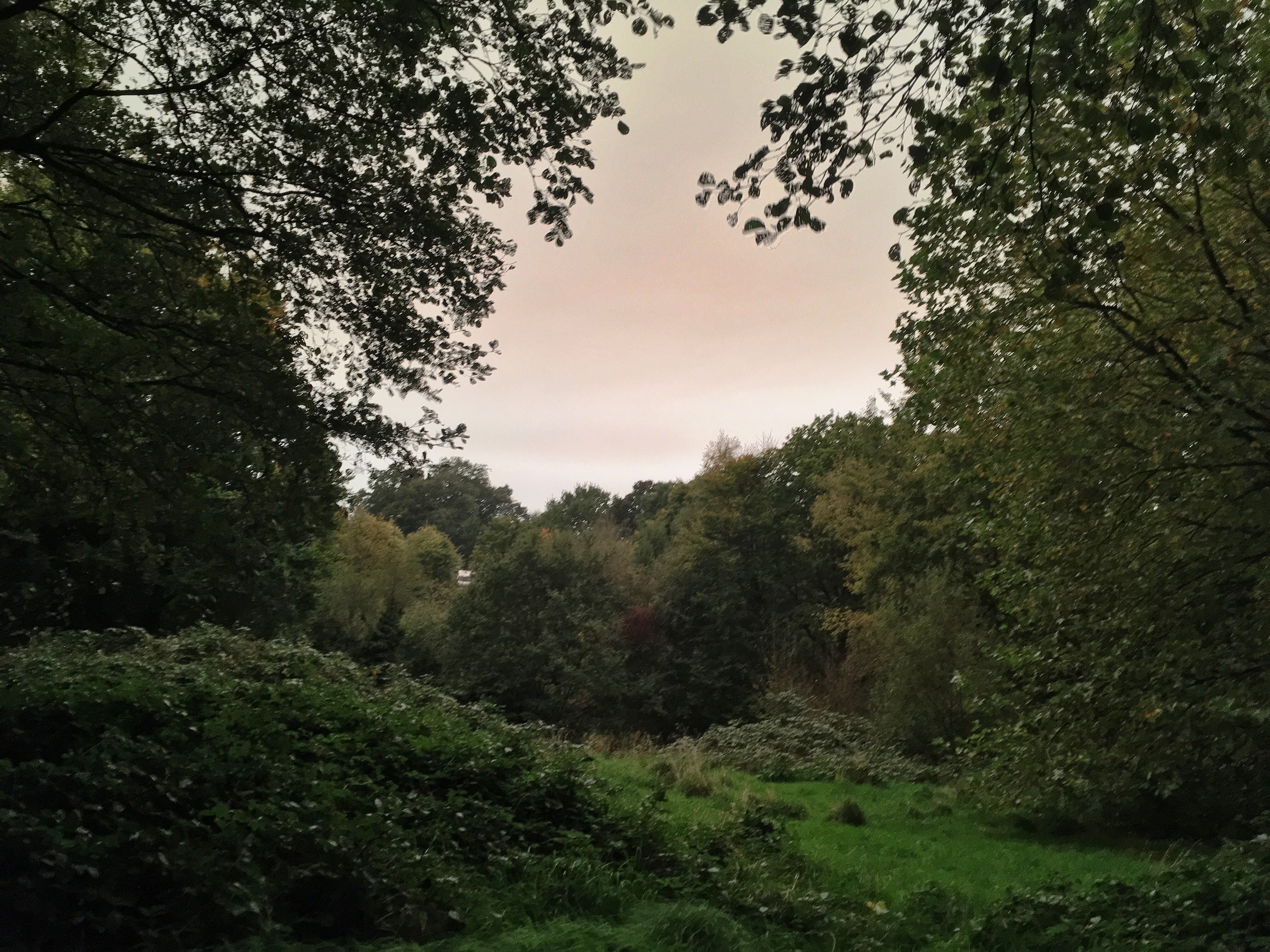 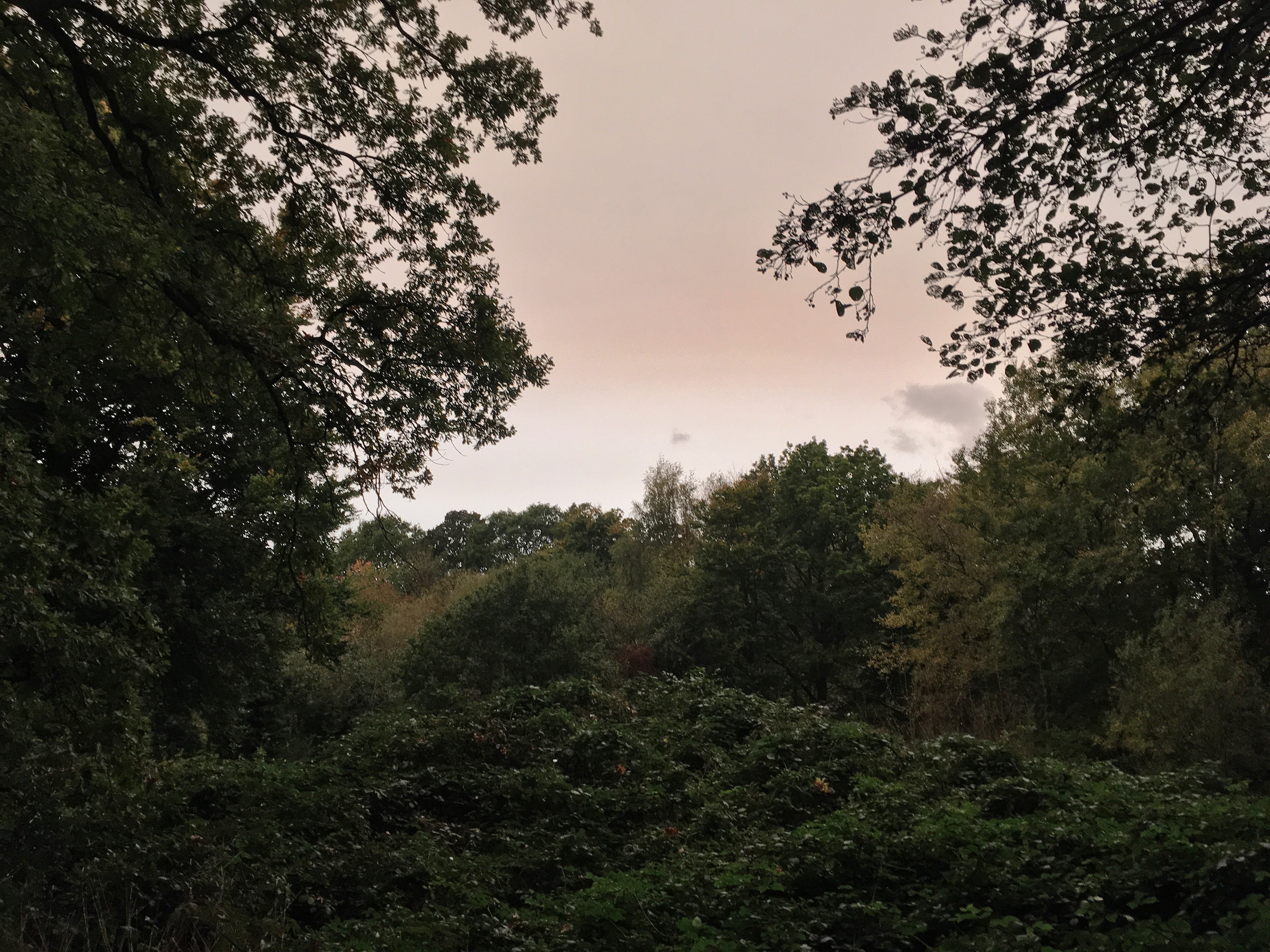 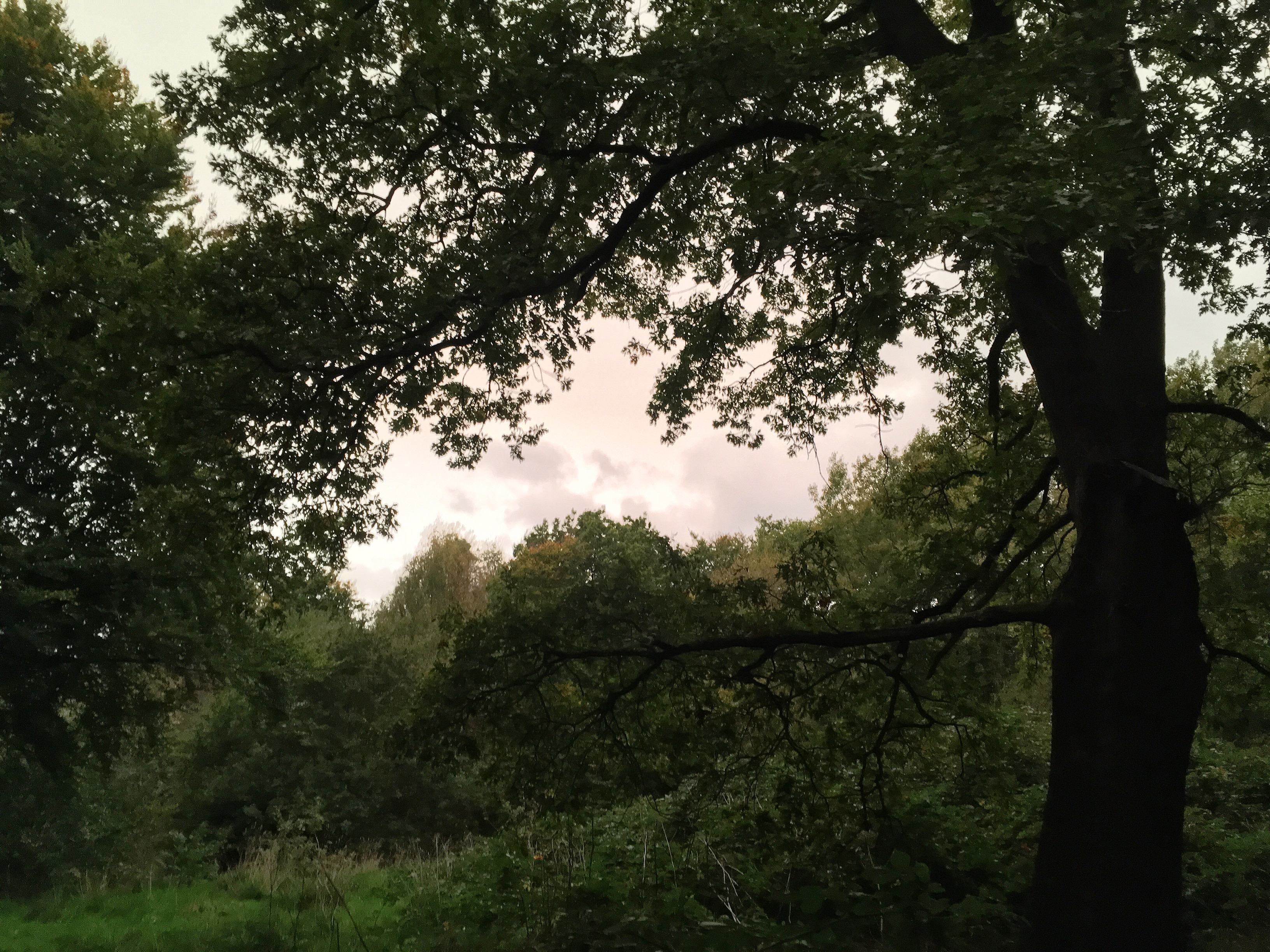 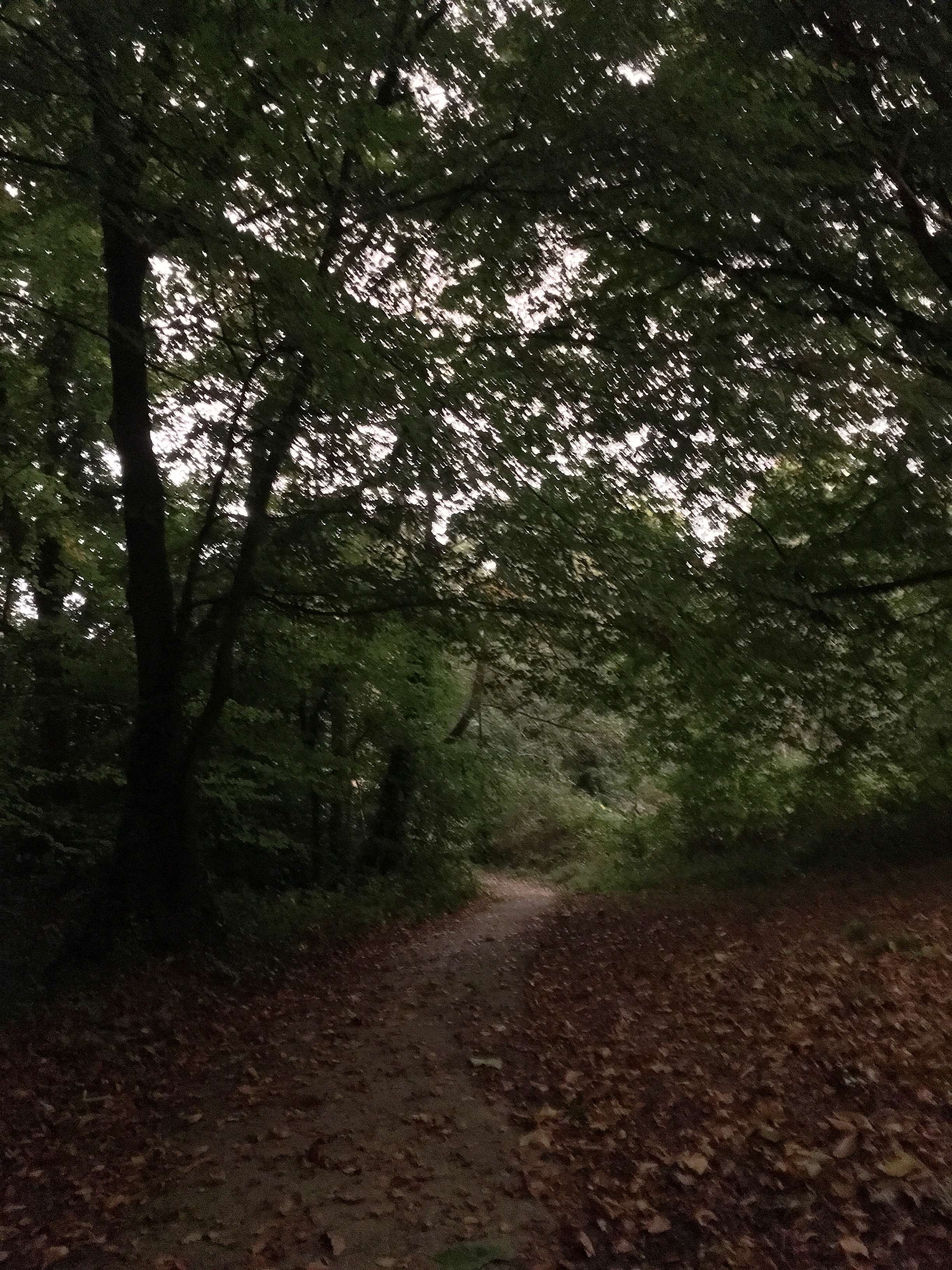 The low light levels meant the photos I took weren’t the best quality but, whatever was causing this strange phenomenon, I wanted to capture as much of it as I could. The rational part of my brain knew there was probably a simple, non sinister explanation. Even so, it made me realise how easily primitive fears can be awakened when nature begins to behave strangely. 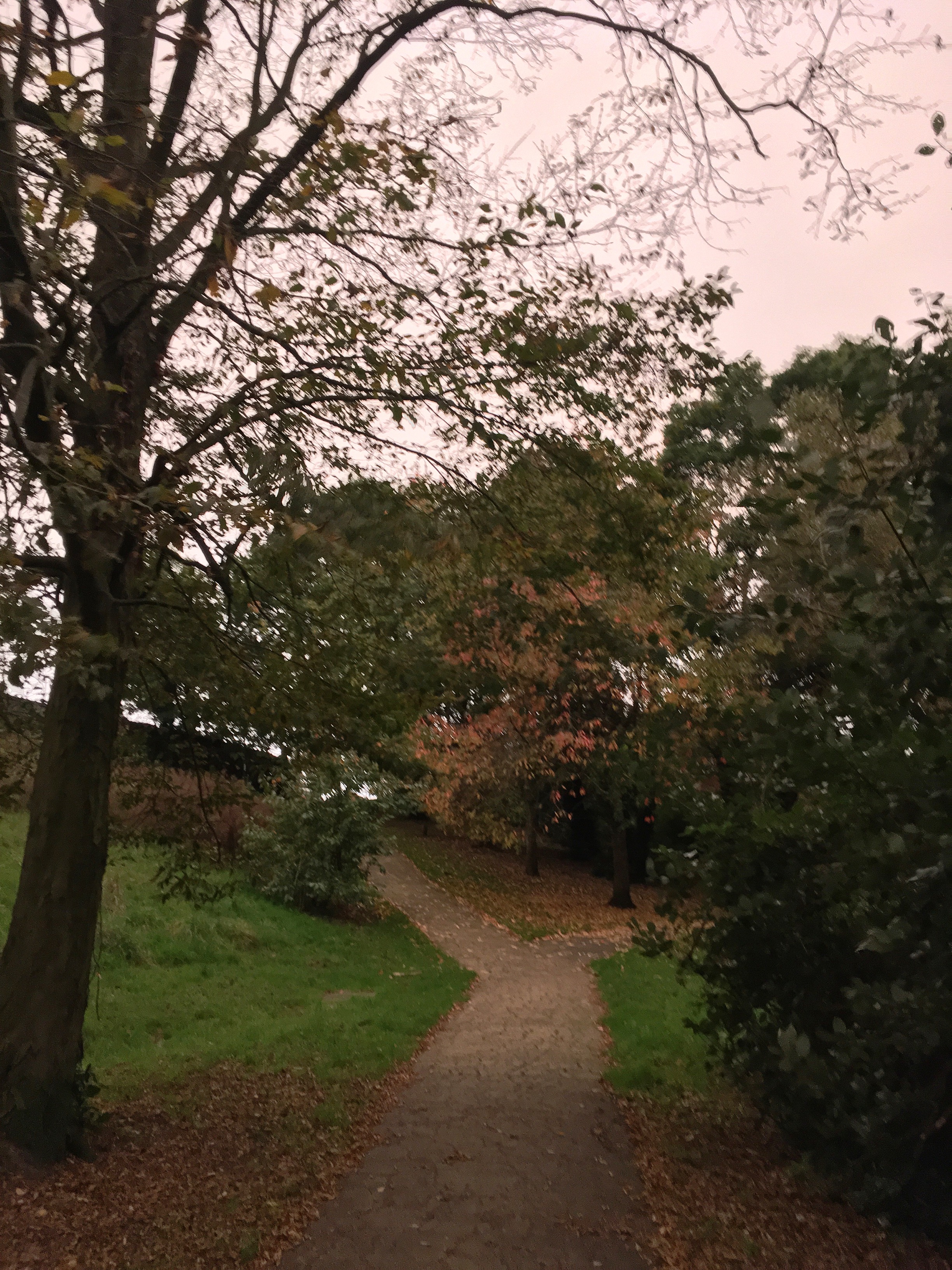 The final part of my walk home was along the Main Road and, as I turned this way and that, looking at the sky, it seemed to me the colour of it changed depending which direction I was facing. Whatever the cause, it seemed to be an oddly coloured cloud of some kind, very high in the sky. 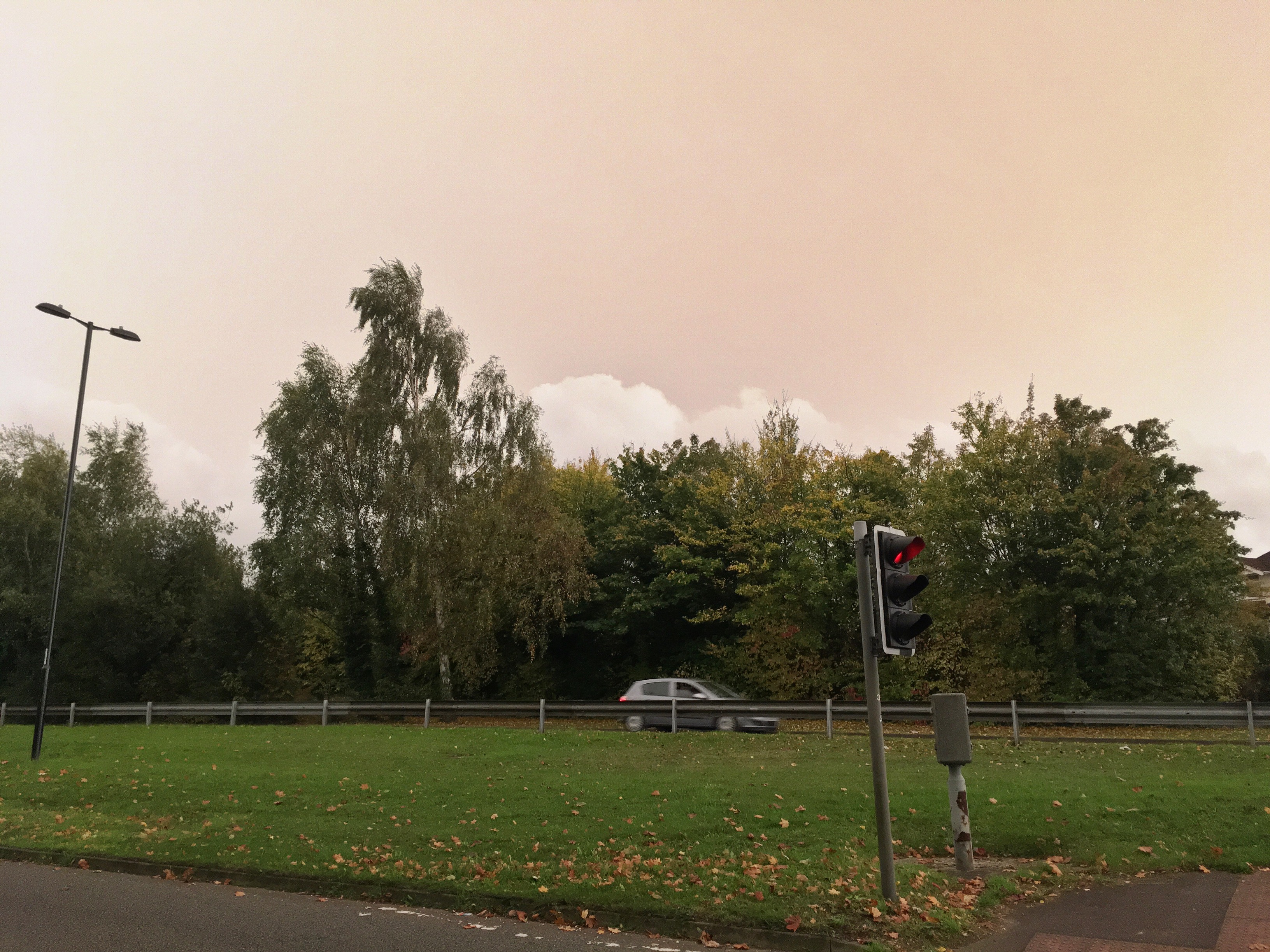 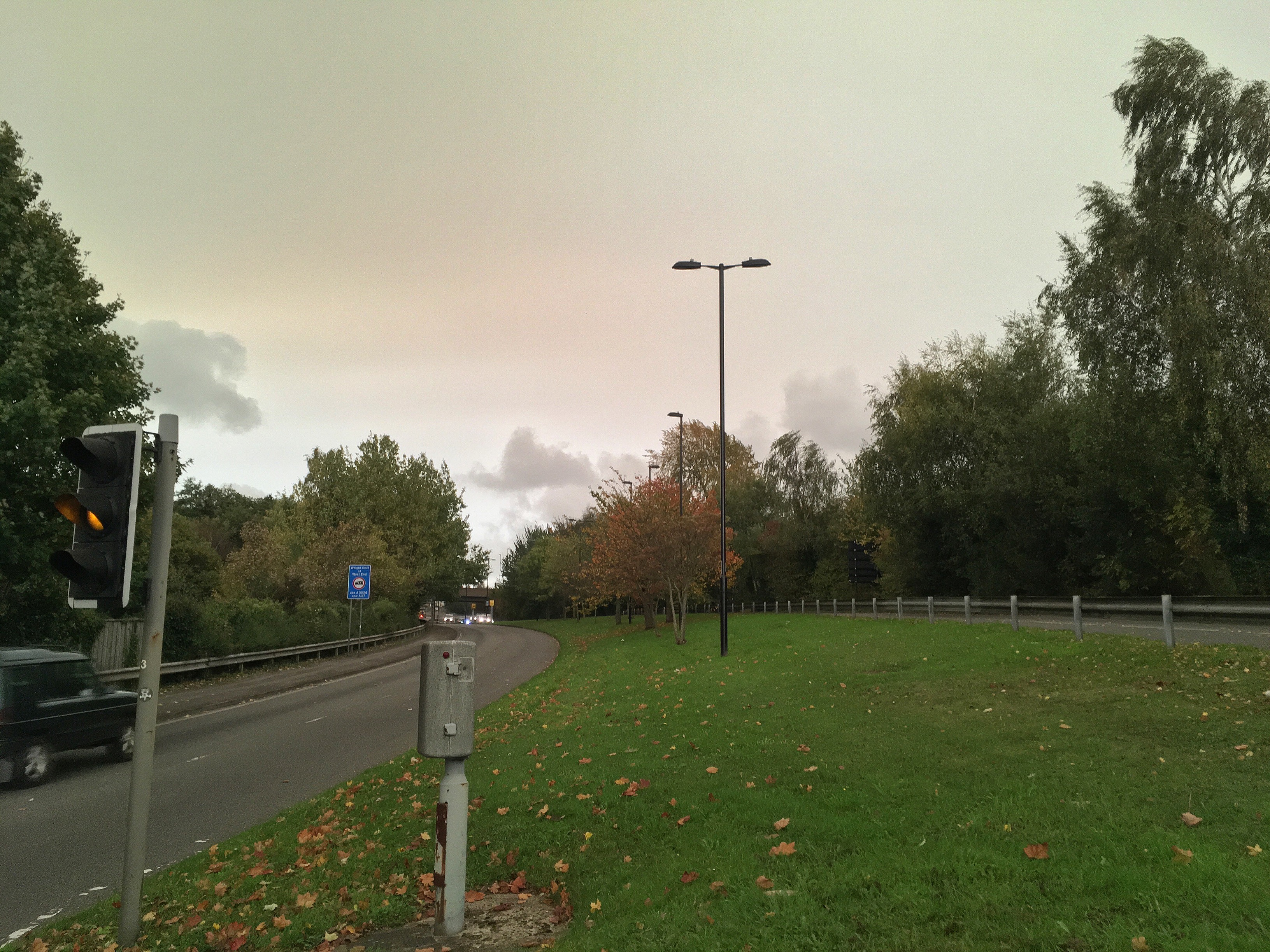 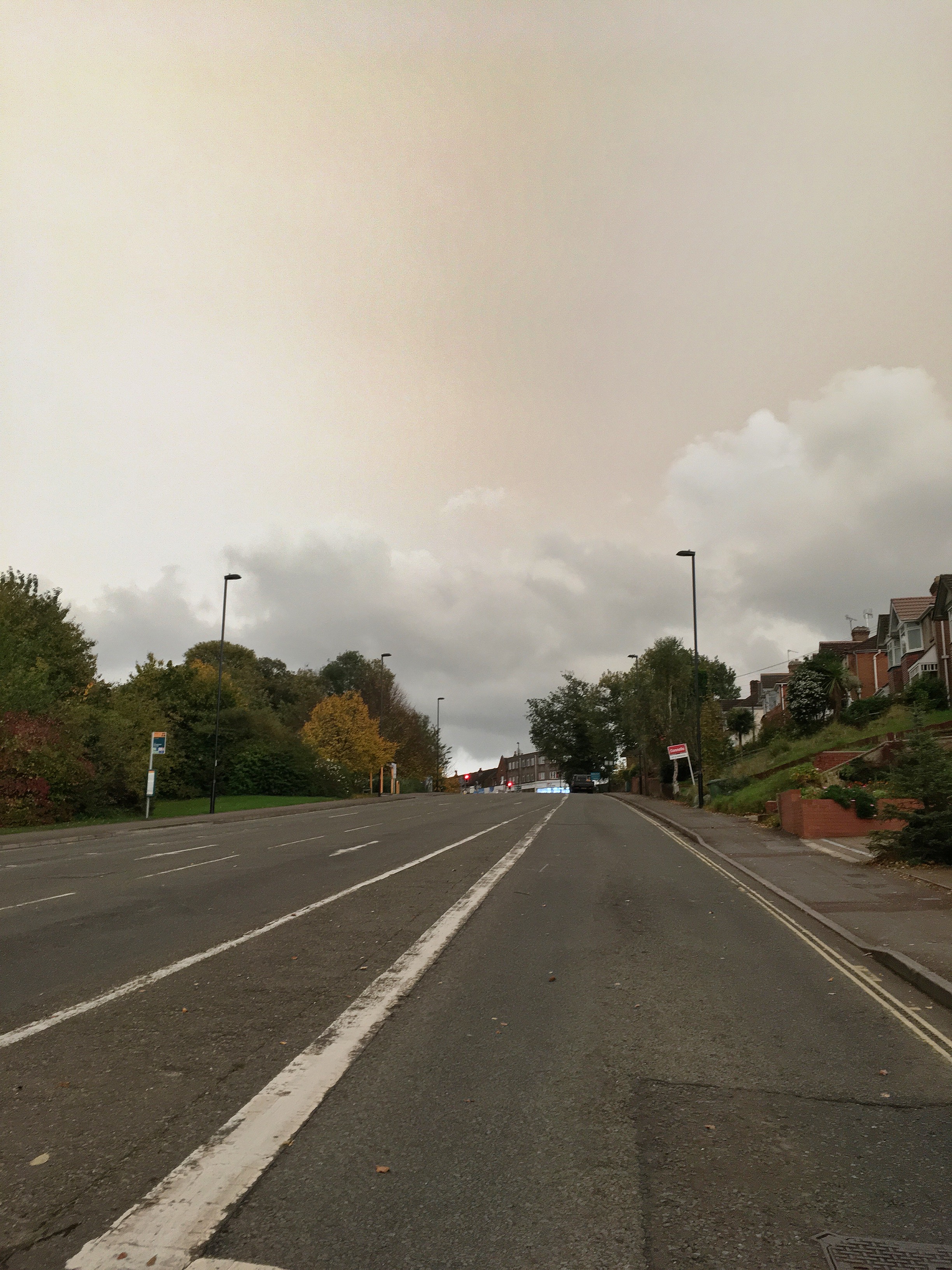 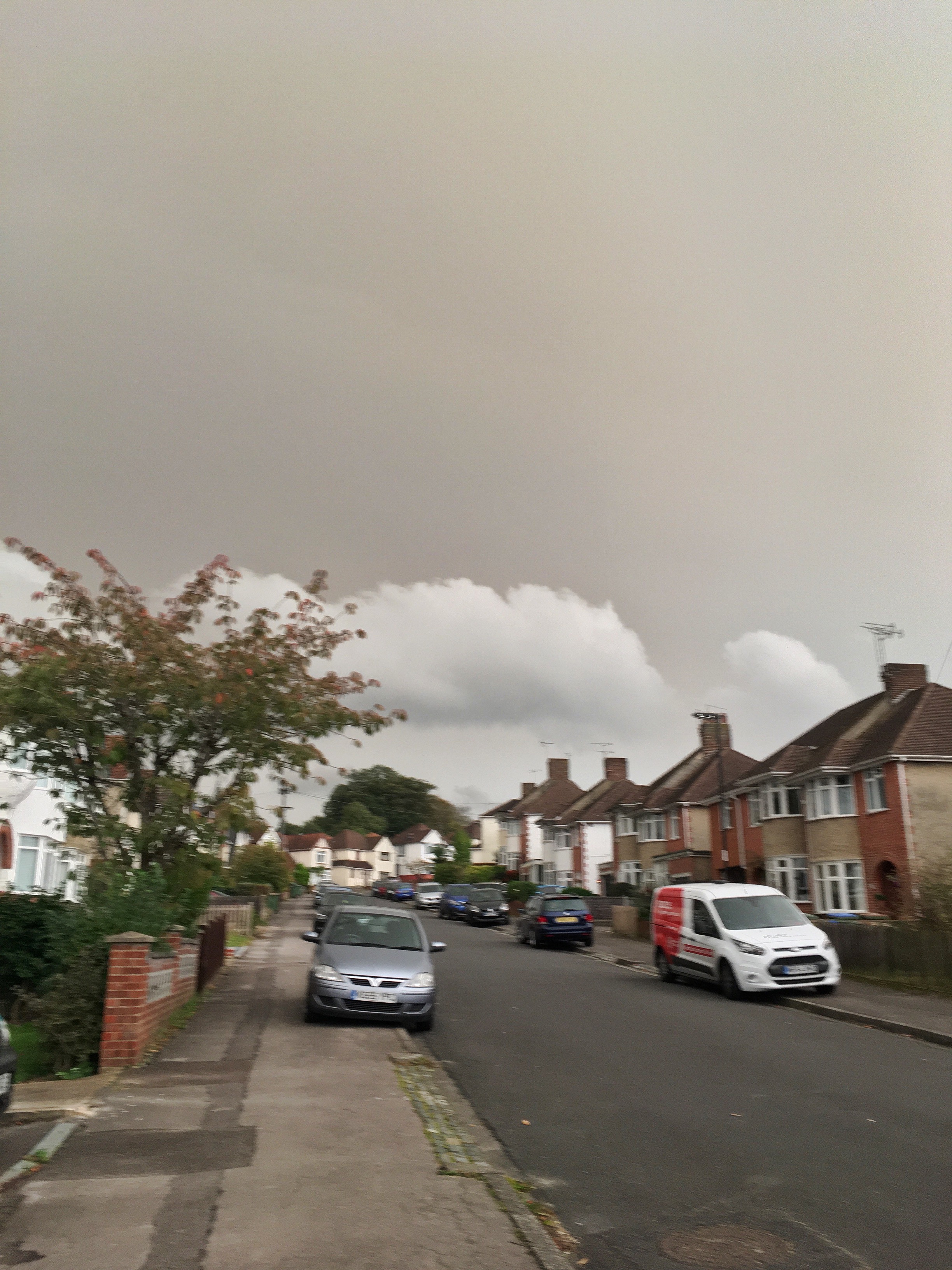 When I got back home, CJ was in the garden staring at the sky. While I’d been out he’d been Googling, trying to find out what was going on.
“It’s to do with Hurricane Ophelia,” he told me. “It picked up dust from the Sahara and smoke from the forest fires in Portugal as it passed over. The weird colours are all down to the length of the light waves. The dust particles in the air are making the shorter wave blue light scatter, making the sky look reddish pink and the light seem yellowy.”
It was good to have a logical explanation, even if it was all a bit too technical for me. At least nothing sinister was going on but knowing this it didn’t make the sky or the light any less strange. 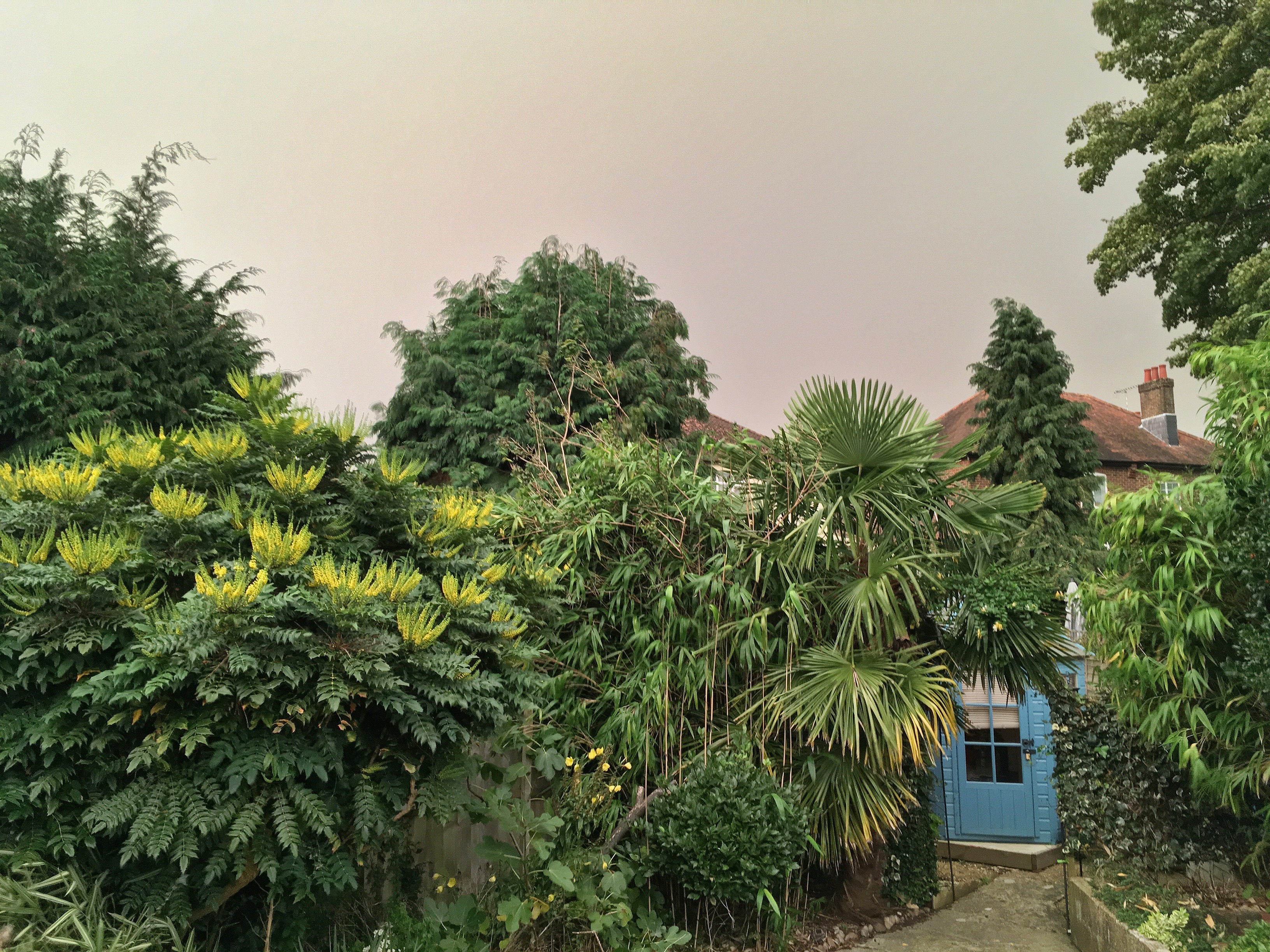 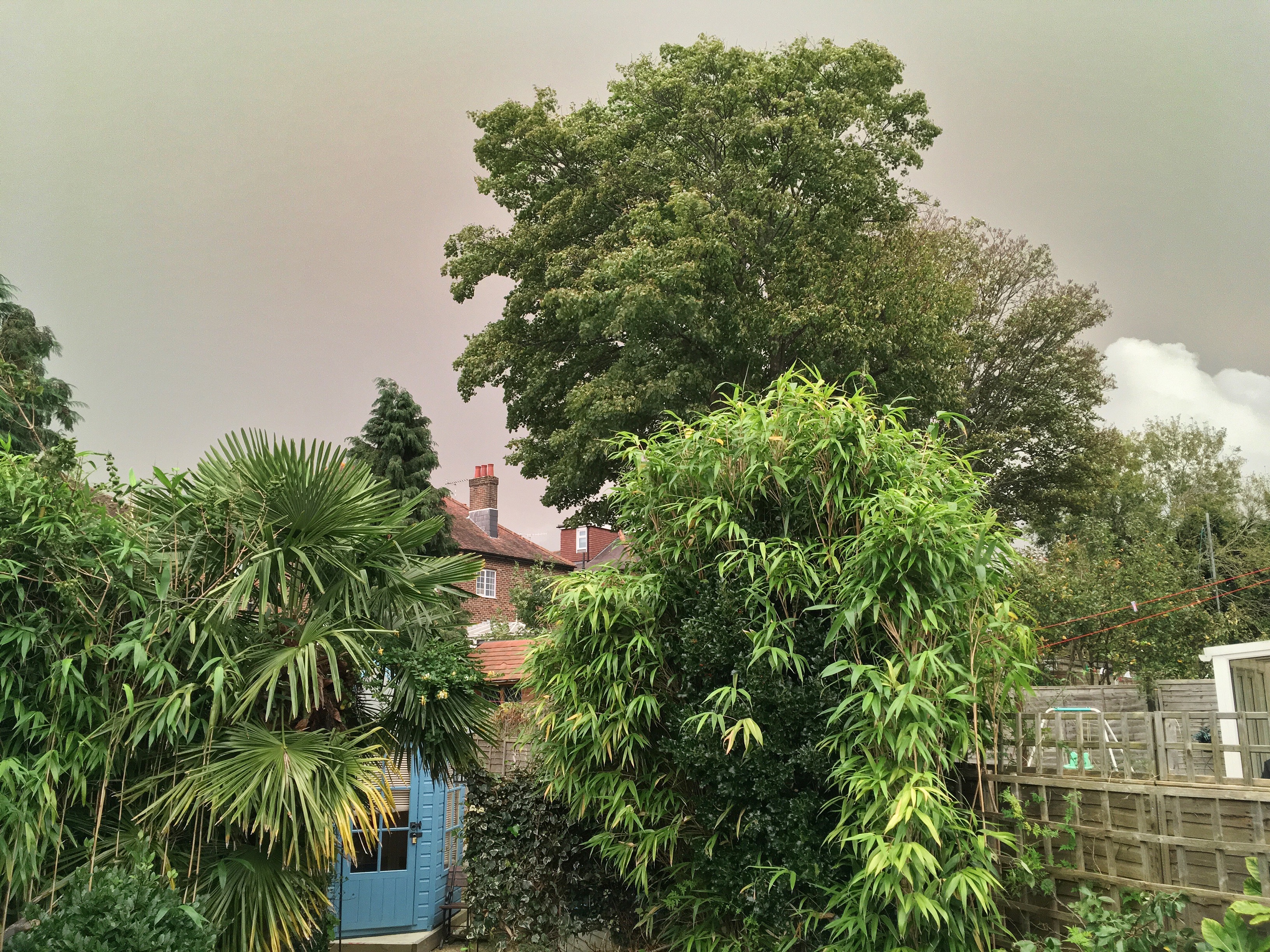 A couple of hours later CJ called me outside again. All day the sun had been hiding behind the layer of smoky, sandy cloud. Now it had finally broken through, more or less, but it didn’t look like the sun at all. It was the orange of sunset but still high in the sky. Somewhere someone was probably looking around for a virgin to sacrifice. 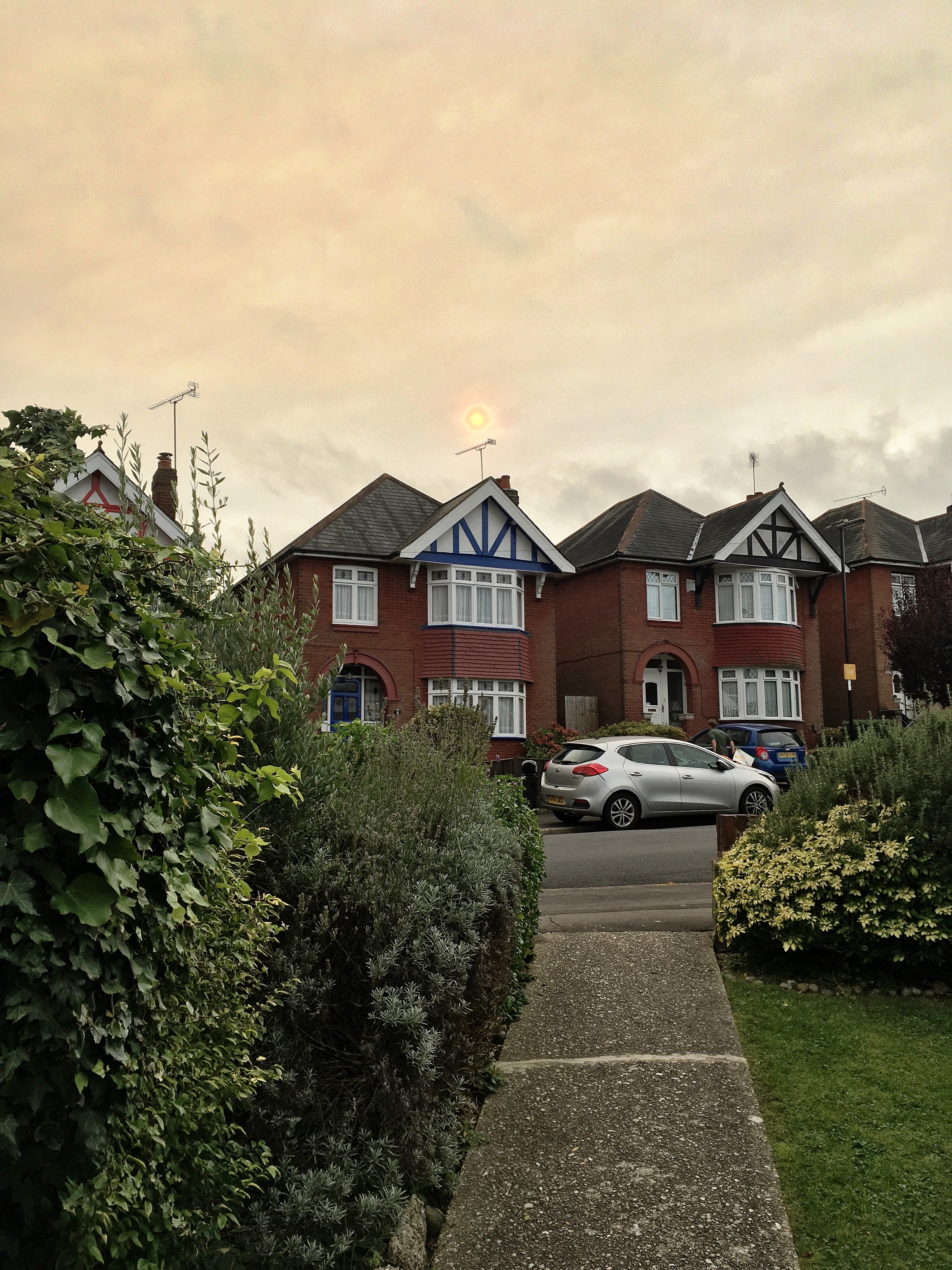 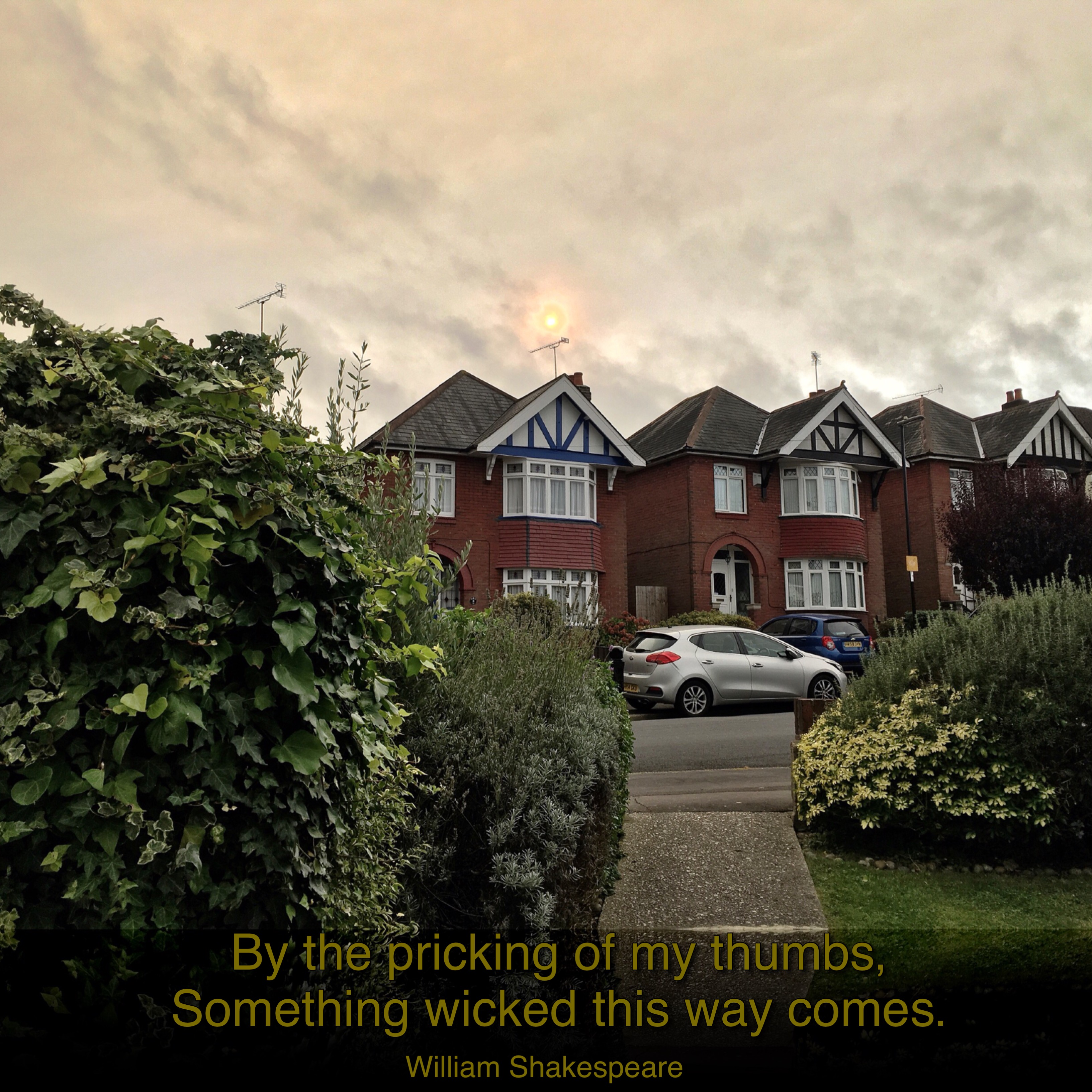 10 thoughts on “Portent of doom”