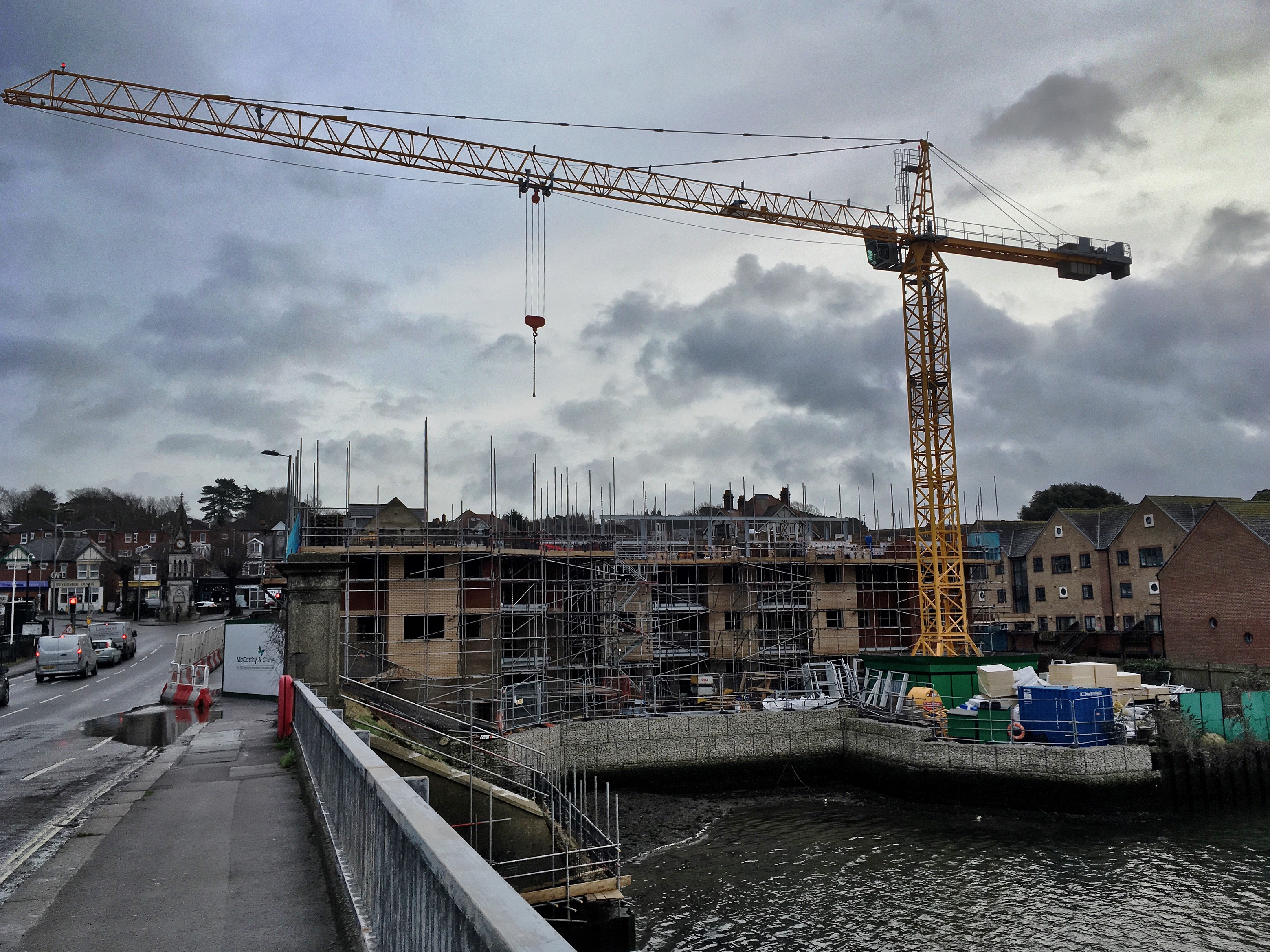 The first proper walk of 2018, if you don’t count lots of dashing about shopping or wandering around the Old Cemetery in the mud, was a version of Commando’s two bridge challenge. Frankly, at under four miles, it wasn’t much of a challenge but it was the first ‘just for the sake of walking’ walk of the year and there were swans, mud and some climbing that probably wouldn’t have seemed half as bad if I’d had breakfast before I went out.

As usual, there wasn’t much of a plan, just a need to get out and walk that didn’t involve bags of shopping. It was one of those dull mornings, all moody looking clouds with a strong possibility of rain so I didn’t want to stray too far from home or shelter. My feet took me to Cobden Bridge while my mind was elsewhere and I suddenly realised I was on my old walk to the bus mines. There was a mini flood to negotiate as I passed the building work near the Triangle but my boots held up and no cars splashed me.

It was sad to see that the building work has completely hidden the Ekco Radio ghost sign since I last walked this way. I’m glad I took plenty of photographs of it while I could. Down on the river a man was replacing the boards on one of the jettys. It looked like cold work and I couldn’t help wondering how long the wood would last? For a while I stood at the top of the steps to nowhere and watched. The river looked cold and univiting. The sky didn’t look much better either, looming over the jumble of houseboats. In summer they seem like a wonderful place to live. Right now, with the wind whistling and the rain falling I’m glad of a solid brick house. 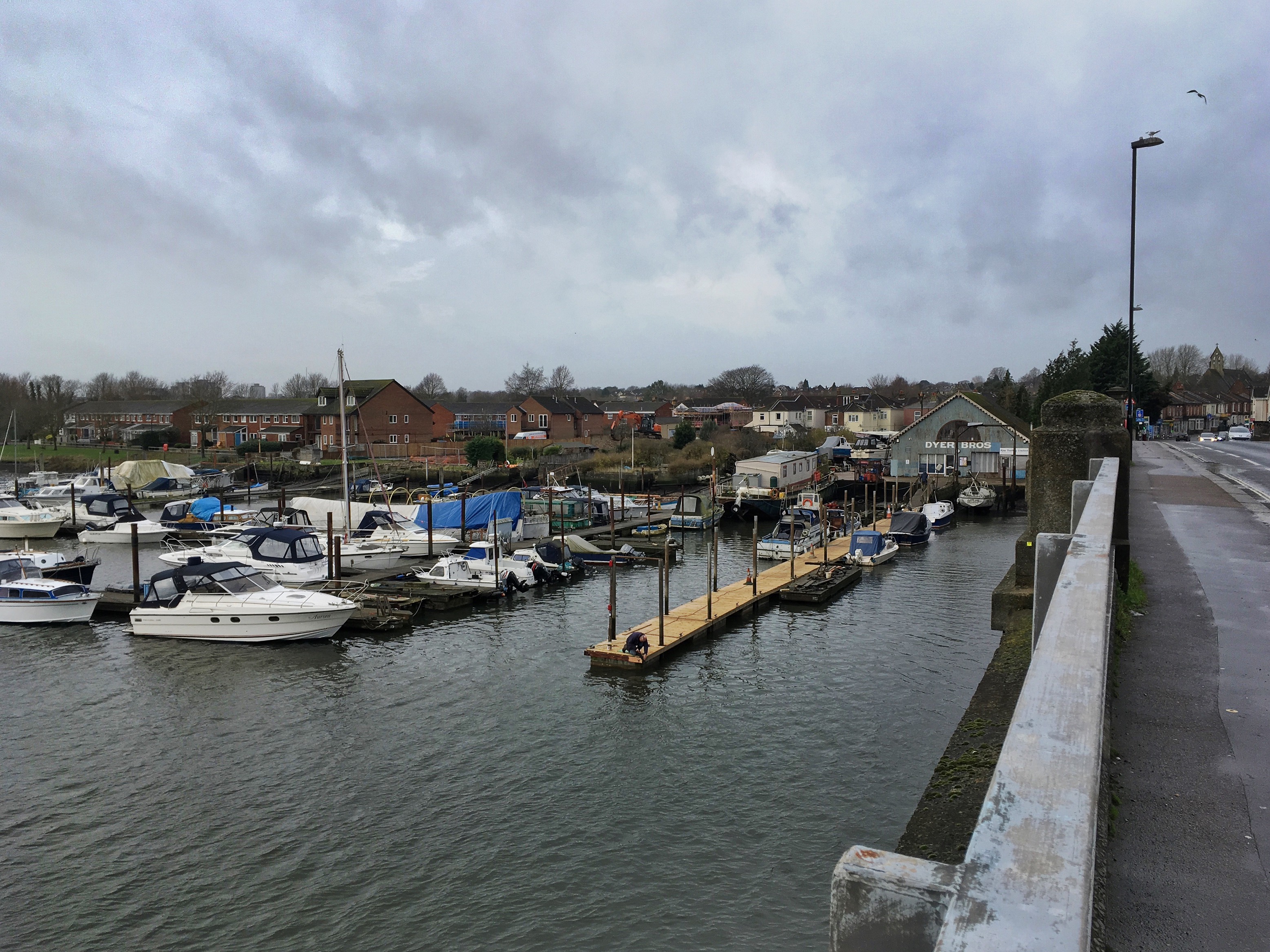 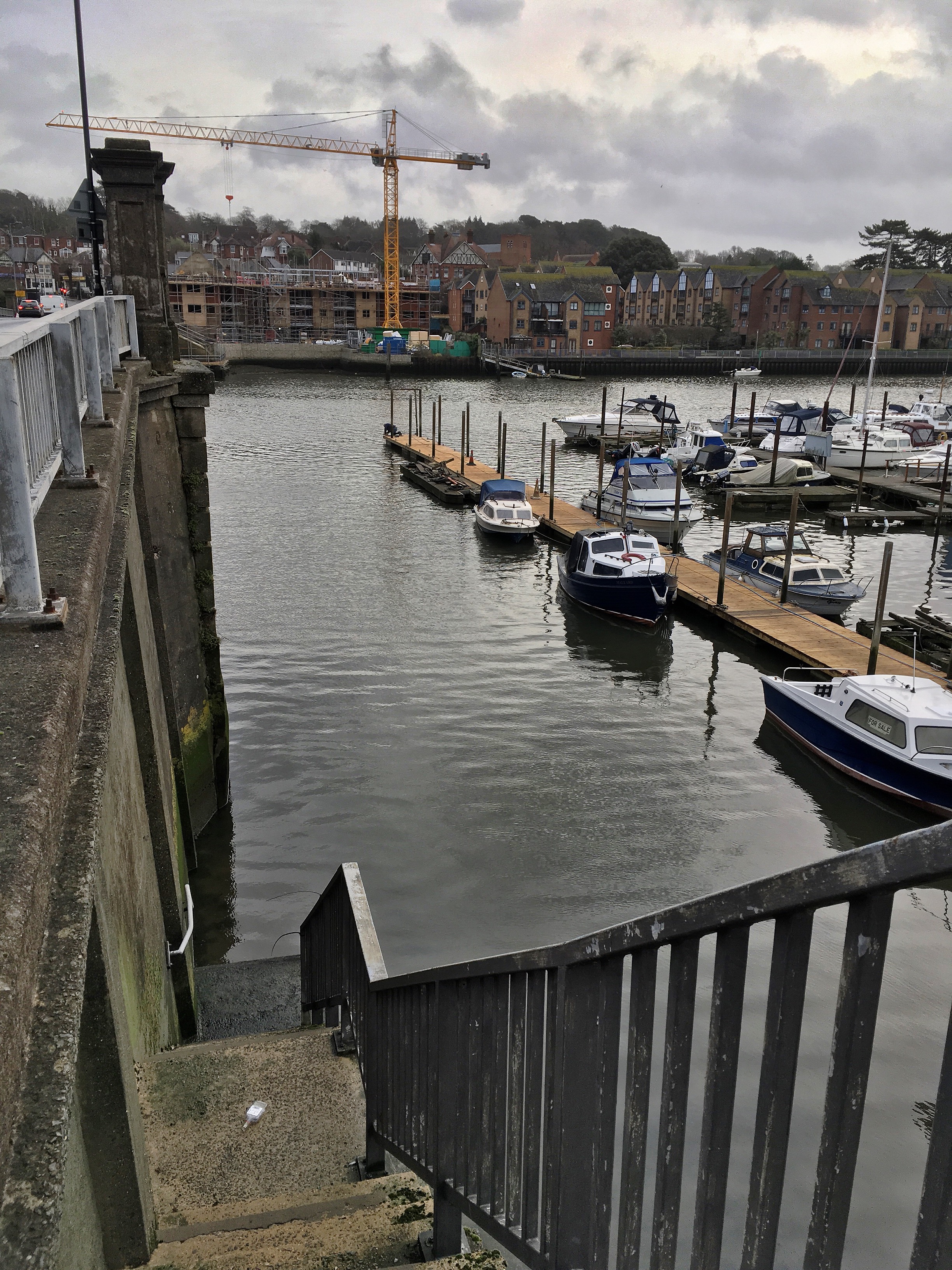 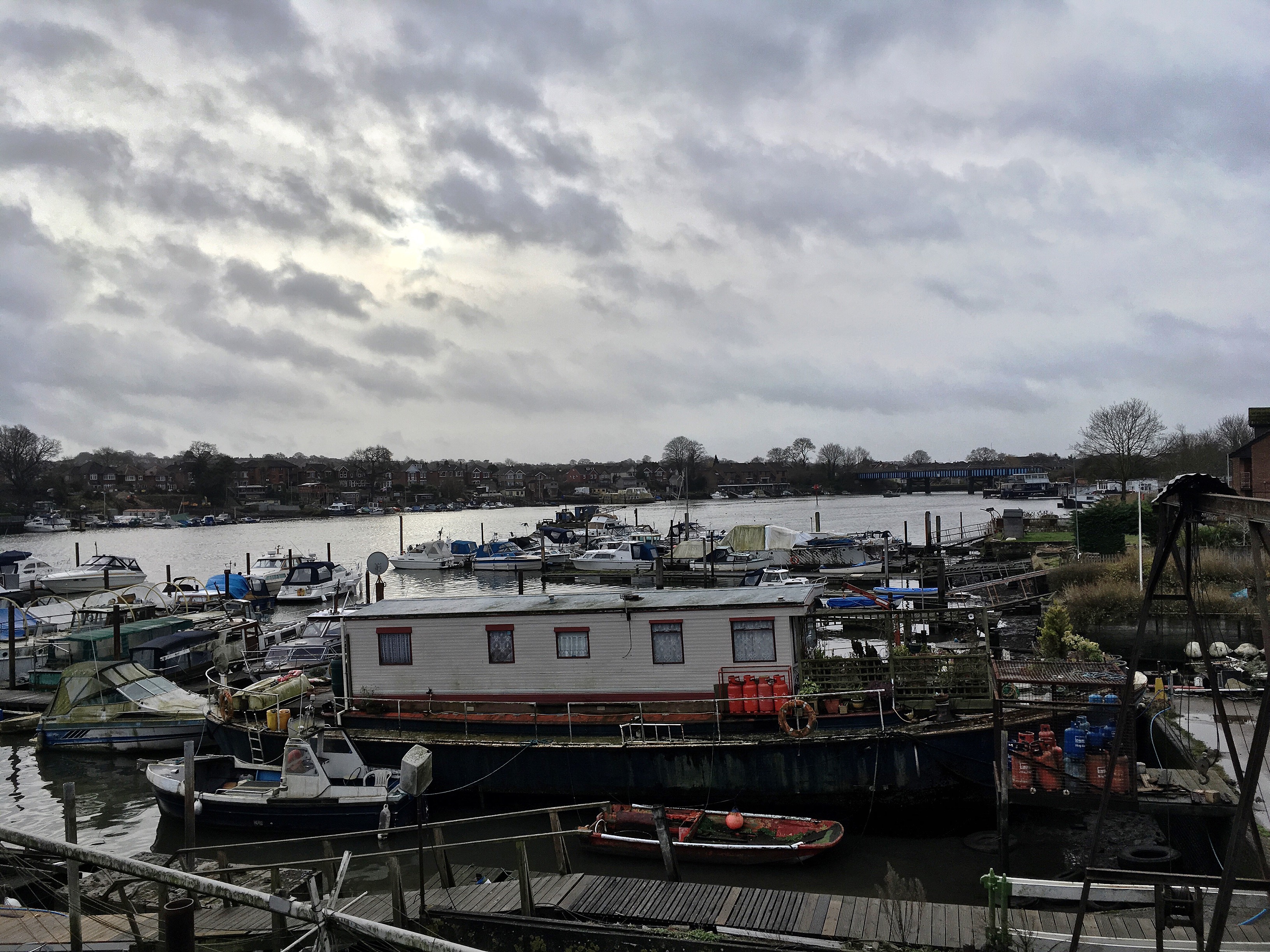 By the time I reached Priory Road I’d decided two Bridges was about as much as I could cope with so I turned off and headed towards Horseshoe Bridge, thinking of all the mornings I walked this way to work. At least today there wasn’t a headset and a lot of angry bus users waiting for me.

Some time ago I discovered a phenomenon I named jamais remarqué. It’s a little like deja vu but in reverse, when you suddenly notice something you’ve never spotted before in a very familiar place. This morning it happened to me as I walked down Priory Road. One minute I was strolling along smiling at all the familiar things, the railway bridge, the phone box shed, the stone urn in a front garden, the next I was looking at an incongruously large building amongst all the terraced houses.

The building looked like an austere church and a stone plaque below the pediment told me it hadn’t just materialised since I last came this way. It said St Denys Methodist Church School Hall, built in 1935. A sign above the doors told me it was now the New Testament Church of God and there was a luncheon club. It was a little early for lunch but the thought made my tummy rumble. Stupidly, I’d come out without having breakfast and the two miles I’d walked so far had used up what little energy I’d got from my cup of hot chocolate. A rummage in my bag looking for snacks proved fruitless. 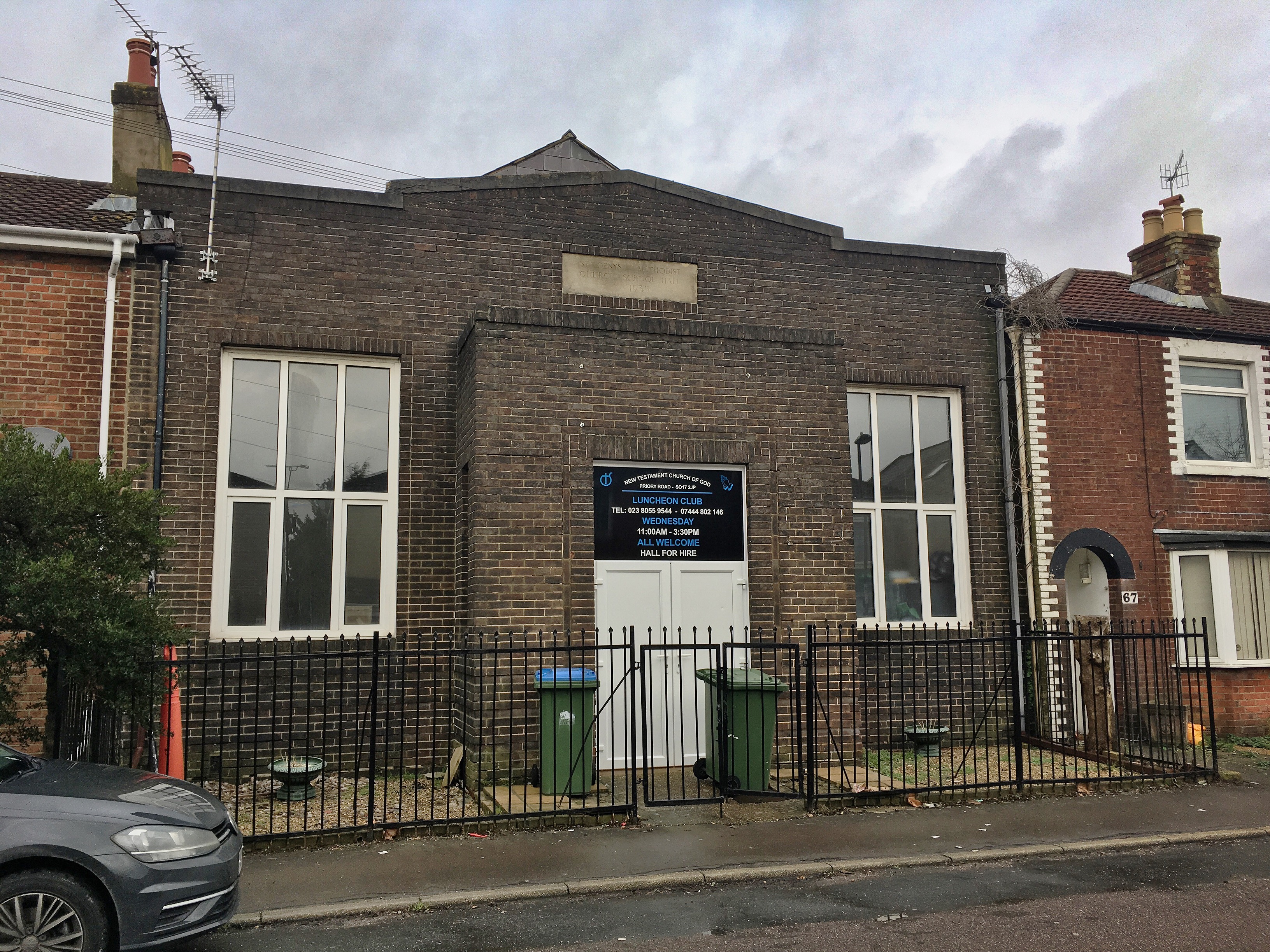 On I went, wishing I’d chosen to walk somewhere with shops where I could buy a snack and wondering about the history of the church school hall. Later Googling told me the hall backs onto a real church. If I’d walked around into Ivy Road I’d have seen it. Apparently, in the 1800’s Methodists used to meet in a house in Priory Road. In around 1860 they built a permanent church there and, in 1935, a Sunday School was added. The church closed in 1969 but it seems it has been taken over by the New Testament Church of God. Sadly, the new congregation has grown too large for the small church and the building is up for sale. It will probably be knocked down and turned into flats which is a shame. Obviously I need to go back and have a look at the front before that happens.

Still wondering how I’d never noticed the hall before, I reached the slipway by the Millennium Flats and turned off to walk along the river. On my walks to and from work I often saw swans here but there were none today. There were hardly any boats moored up behind the flats either but a few ducks were bickering and quacking  loudly. 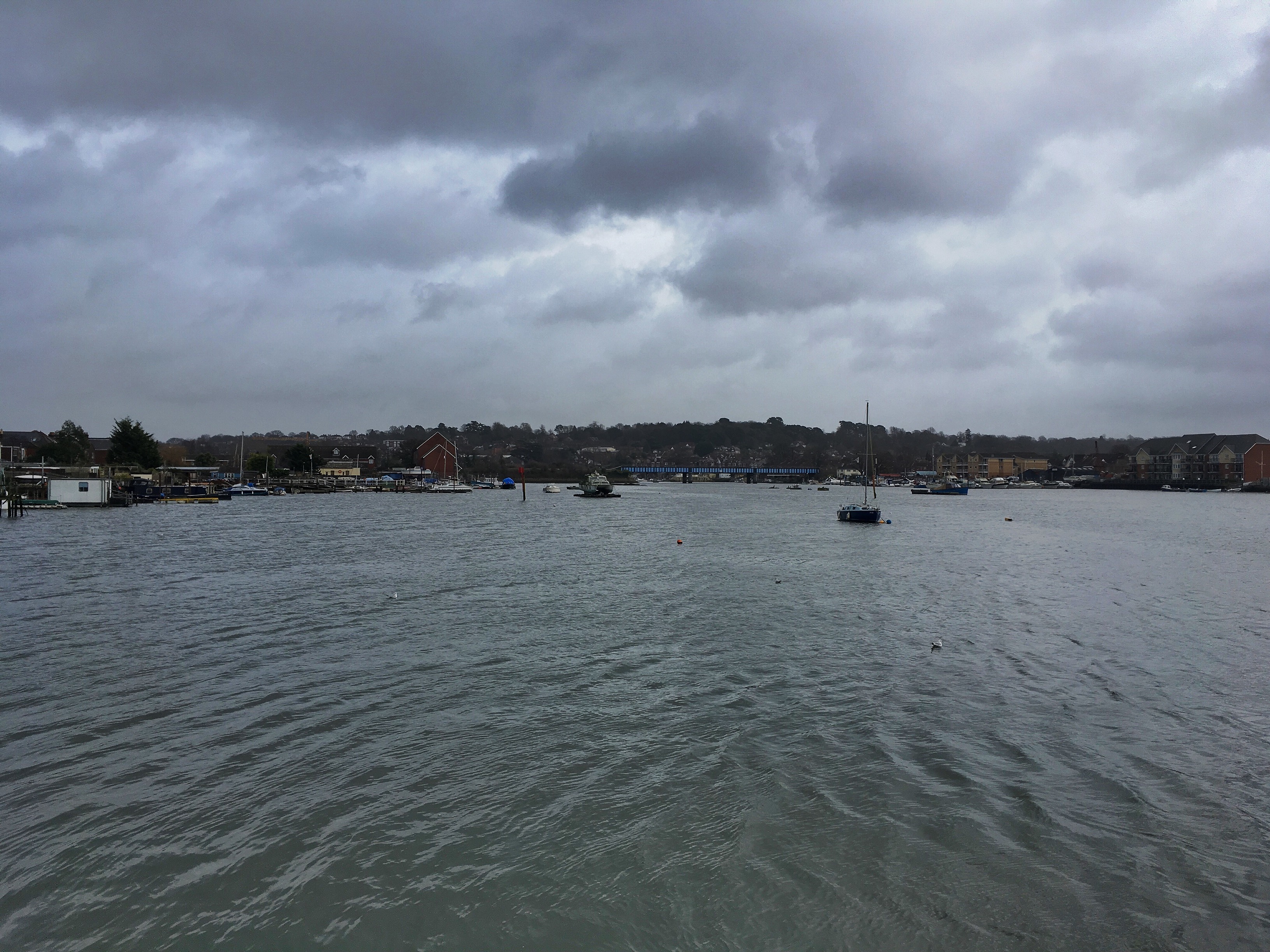 Climbing the steps onto Horseshoe Bridge, my legs told me I really should have eaten before I came out. They felt like lead and each step was an effort. At the top I stopped to rest for a moment and look over the fence at the stubbly area where all the trees and shrubs were cleared. The sky seemed threatening and I wondered if there would be rain to add to my lack of energy. 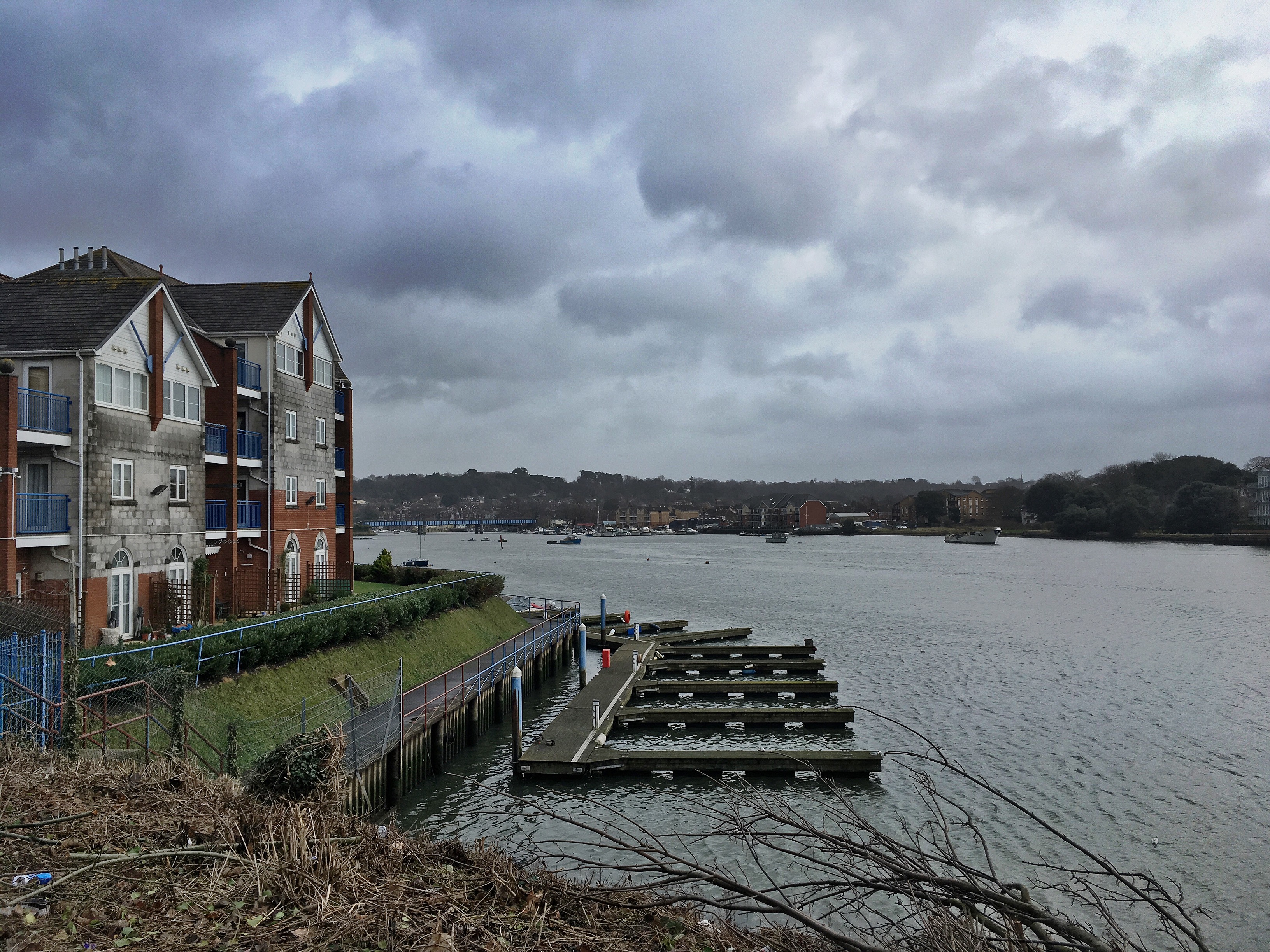 Pretty soon I was on the Boardwalk and, with no wildflowers to look at an no trains rumbling past my mind was wandering again. Many years ago, when CJ first started school, I worked in an office overlooking this shore line. Back then there was no Boardwalk and, when the tide was high like this morning, no way to walk this route. The office is still there on the corner by the big stones, but the business has relocated. My desk was by the window on the ground floor and it was probably one of the best views I’ve ever had while working. 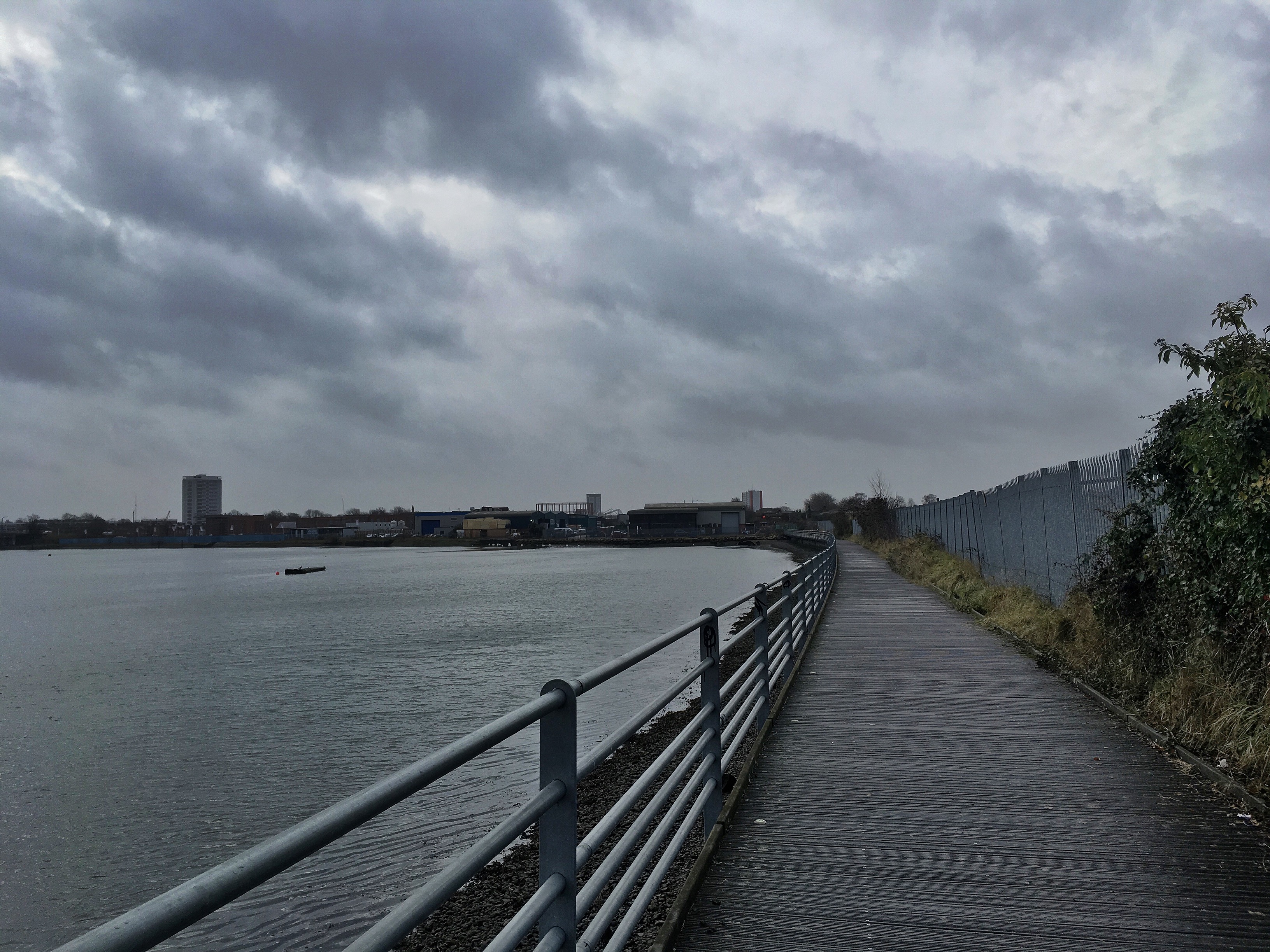 A young hippy couple lived on a houseboat on the river just outside the window. They had a golden Labrador who liked to swim back and forth when they rowed their little boat to and from the shore. It must have been cold and damp in winter but they seemed happy enough. When the weather was really bad Big John, the owner of the business, used to take them food parcels. They couple and their dog are long gone but there’s a rusting wreck on the corner that may, or may not be the the remains of their boat. Seeing it always makes me smile and wonder what became of them? 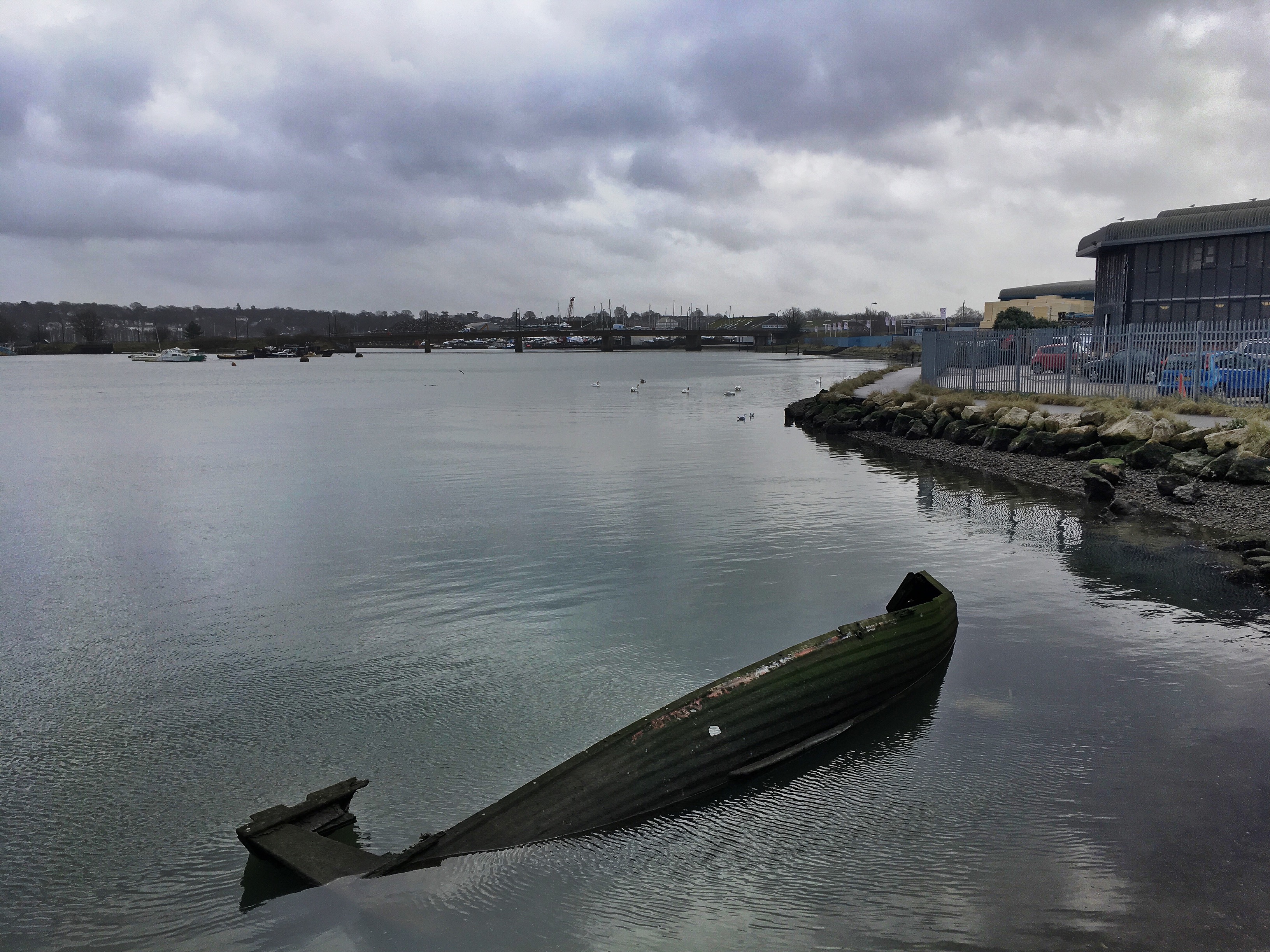 As I turned the corner by the big stones where Commando, CJ and Bard used to play football while they waited for me to finish work, I saw my first swans of the year. The people who work in the offices now often throw them food so they looked at me expectantly as I passed. Of course I had nothing, not even a snack for myself. 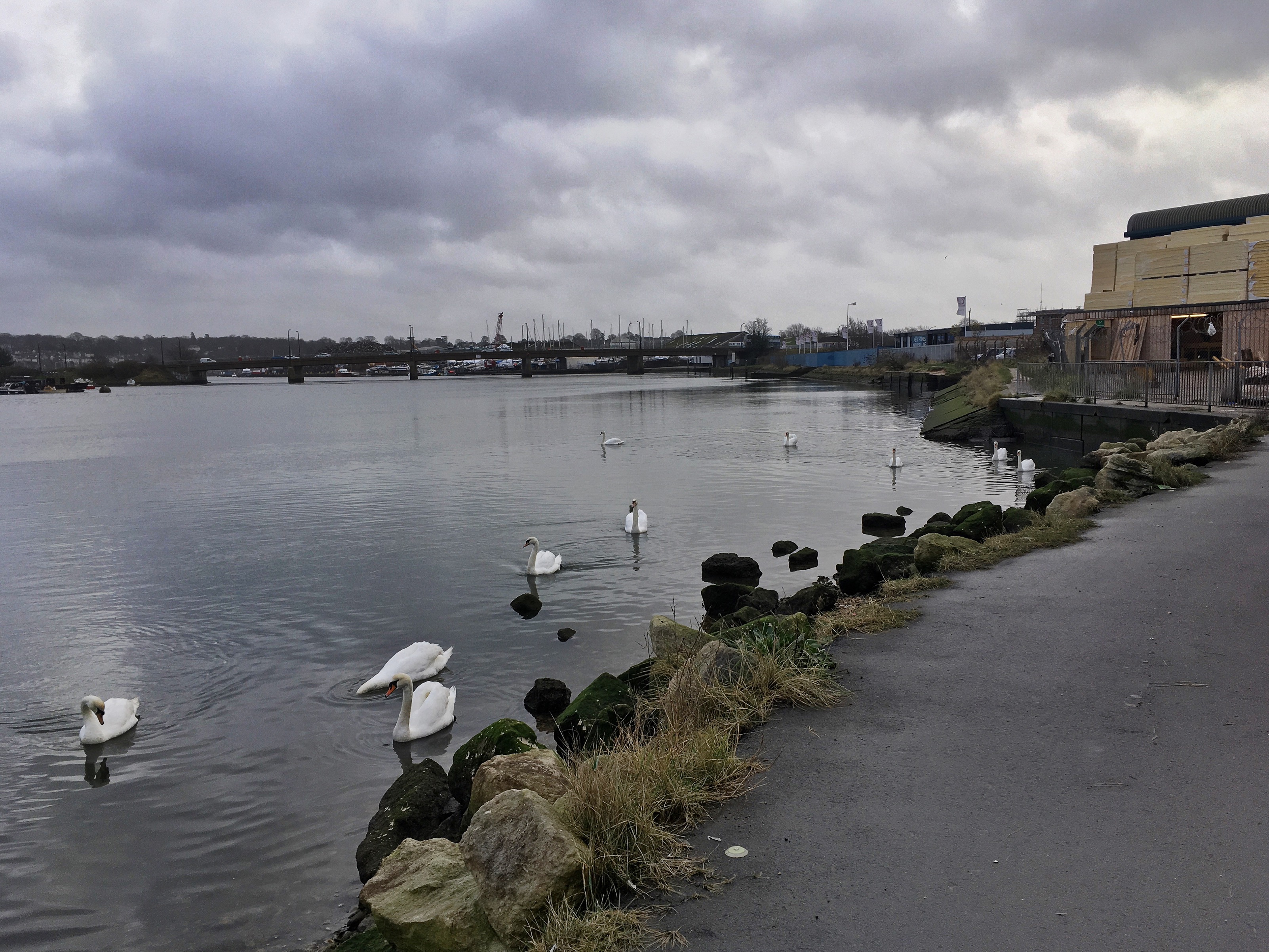 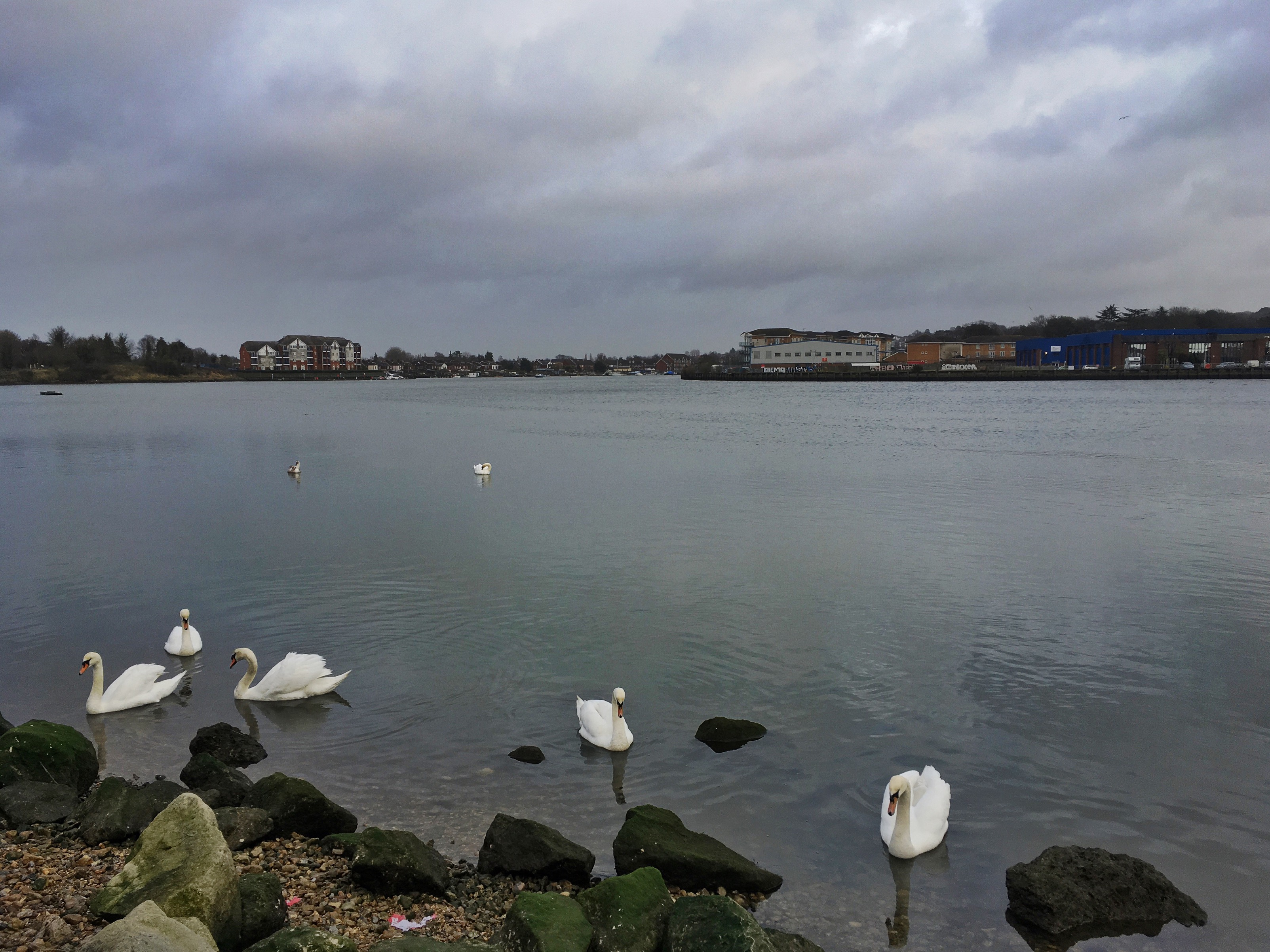 If my mind hadn’t been clouded by hunger and I’d been thinking straight I’d have turned off here and walked through the industrial estate to the road. As it was I carried on along the footpath towards the second bridge of the morning. The big blue hoardings the builders have put up meant I couldn’t see the progress on the new apartments where the demolished TV studio once stood and the path got progressively muddier as I walked. By the time I reached the big stakes where the Log Pond used to be there were huge puddles right across the path. Keeping close to the hoardings so I didn’t end up in the river, I slipped and slid my way through them. 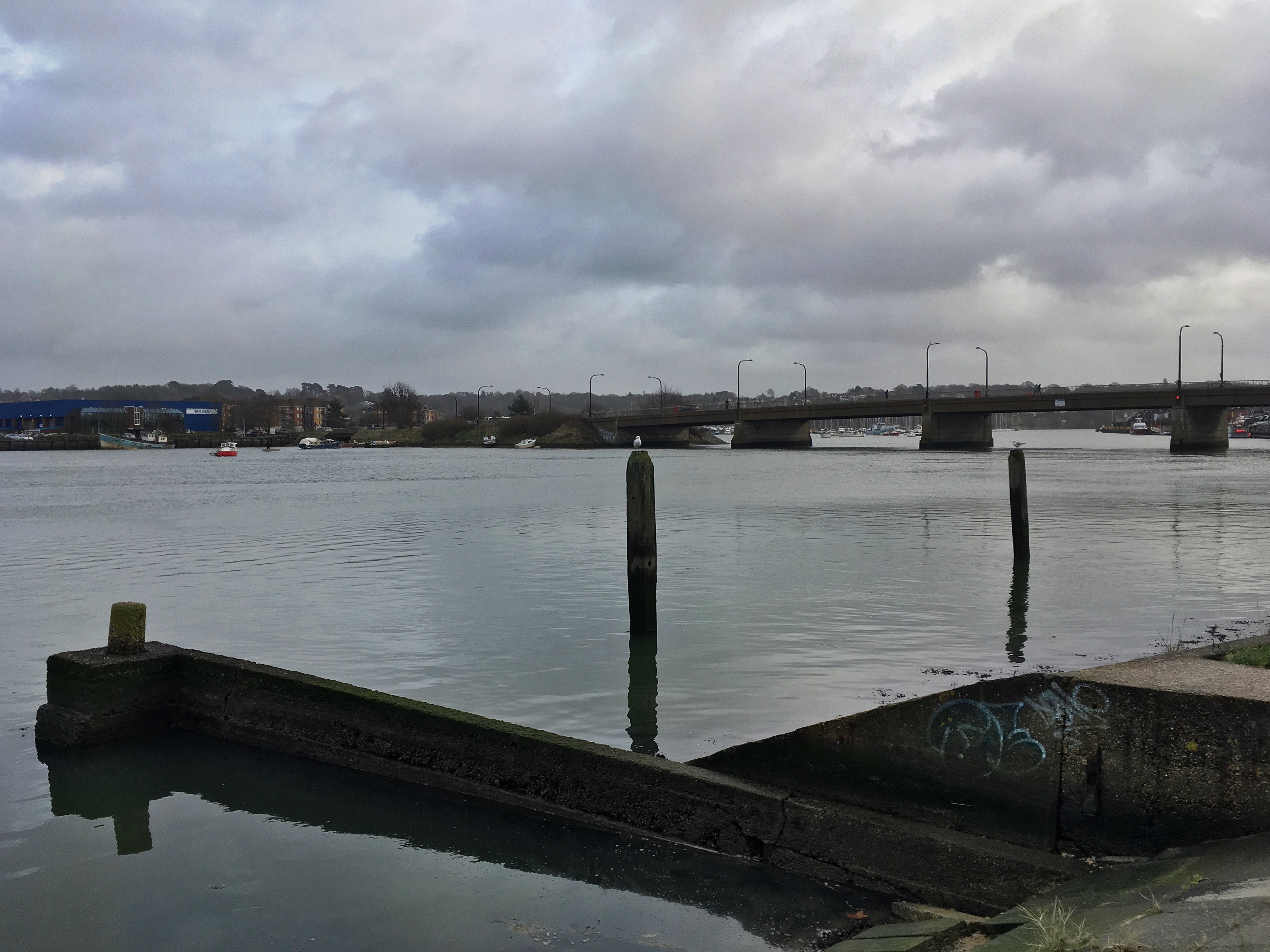 By the time I’d climbed the steps onto the bridge I was exhausted. Although I’d only walked about two and a half miles the lack of breakfast and snacks was really taking a toll. At least from the bridge I could see the new apartments and the workmen on the scaffolding. For a while I stood and watched them work, willing a little more energy into my tired legs. Whoever buys the apartments will have some wonderful riverside views.

Once I’d crossed the river I walked down the steps onto the embankment. This was, as far as I can tell, part of the original bridge. Now it provides a little respite from the steady stream of traffic heading for town. The western riverbank is filled with businesses, Coalporters Rowing Club, a dry berth for small boats and a huge scrap yard. Once this was the wharf at the beginning of the Itchen Navigation, although you never know to look at it now. 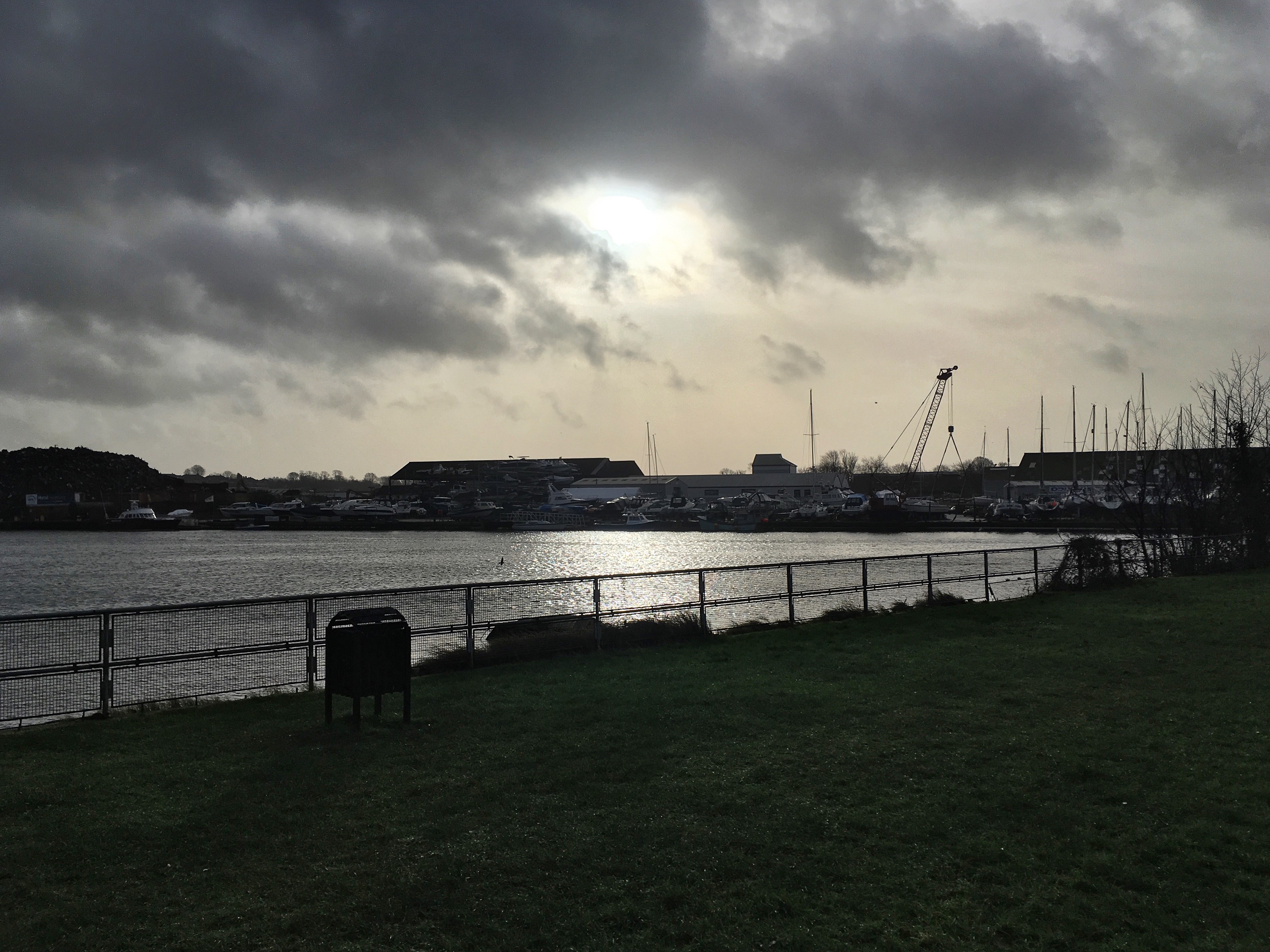 A couple more boats have been added to the ever growing number of slowly rotting hulks on the river here. Whether they’ve actually been abandoned or someone is living on them is hard to tell. The sun was trying to break through the dark cloud but rain still looked imminent and the wind was beginning to get bothersome so I didn’t hang around. 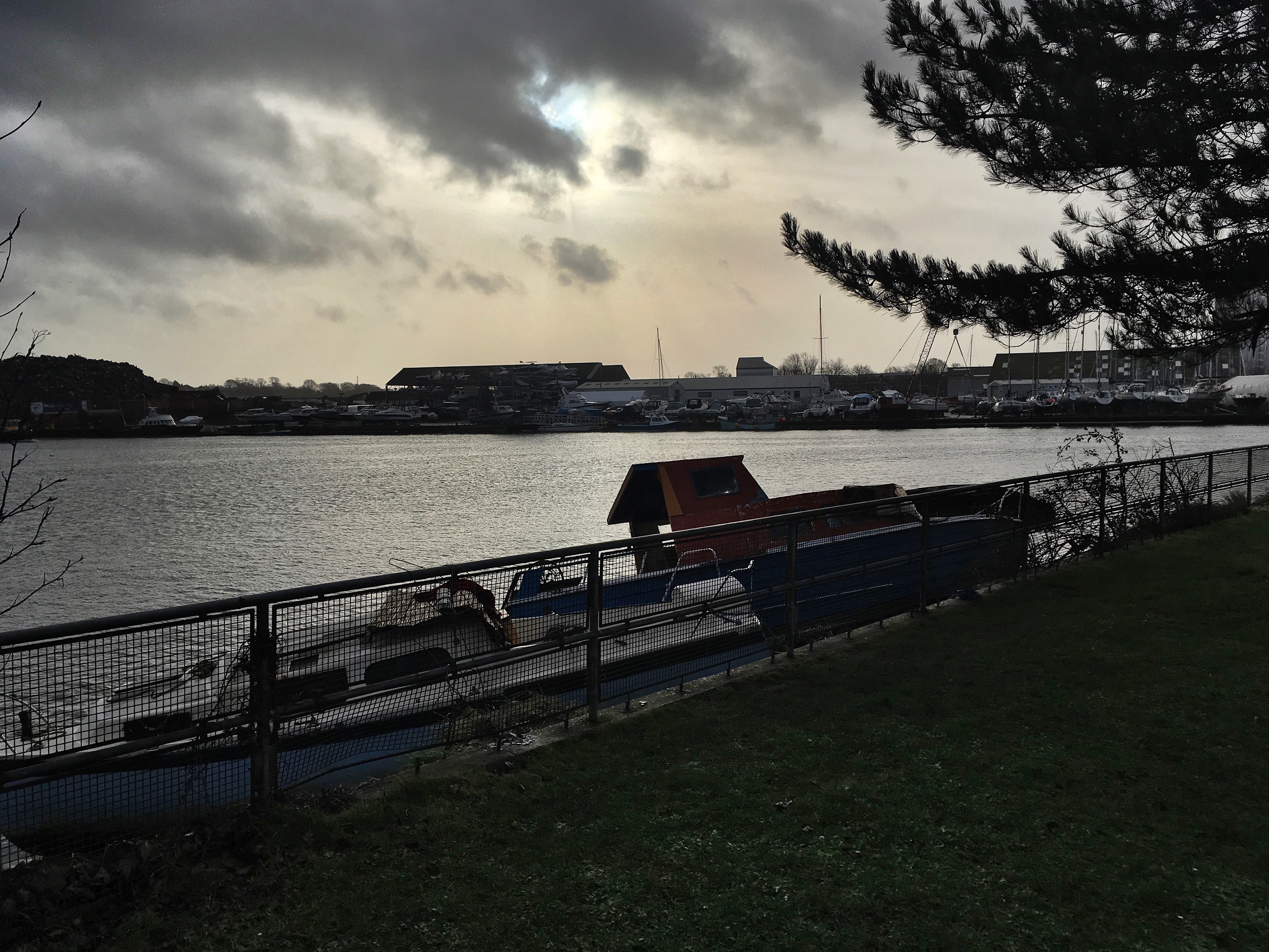 A tiny sliver of blue sky opened up as I made my way to Quayside Road and the sun illuminated the lichen on the bark of one of the whitebeam trees. The brightness was shortlived though and the sun soon disappeared behind the clouds again. 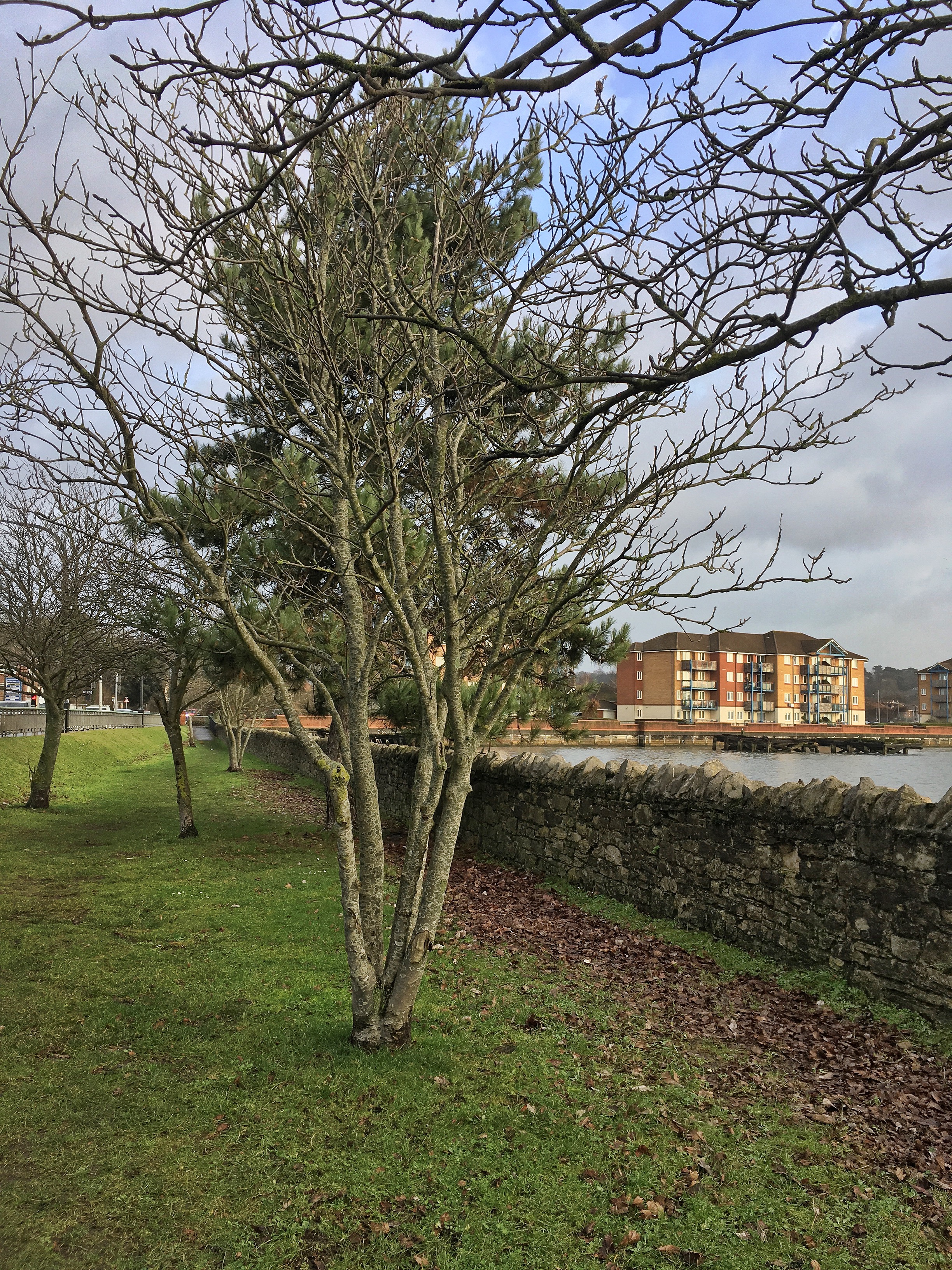 On the corner I stopped to look at the sad remains of the skeleton ship. The dark water lapped at its rotting ribs, slowly eating them away. As far as I can tell this was once a ship used for transporting coal around the docks. It’s been decomposing beside the bridge all my life and it will be sad when it finally disappears for good. 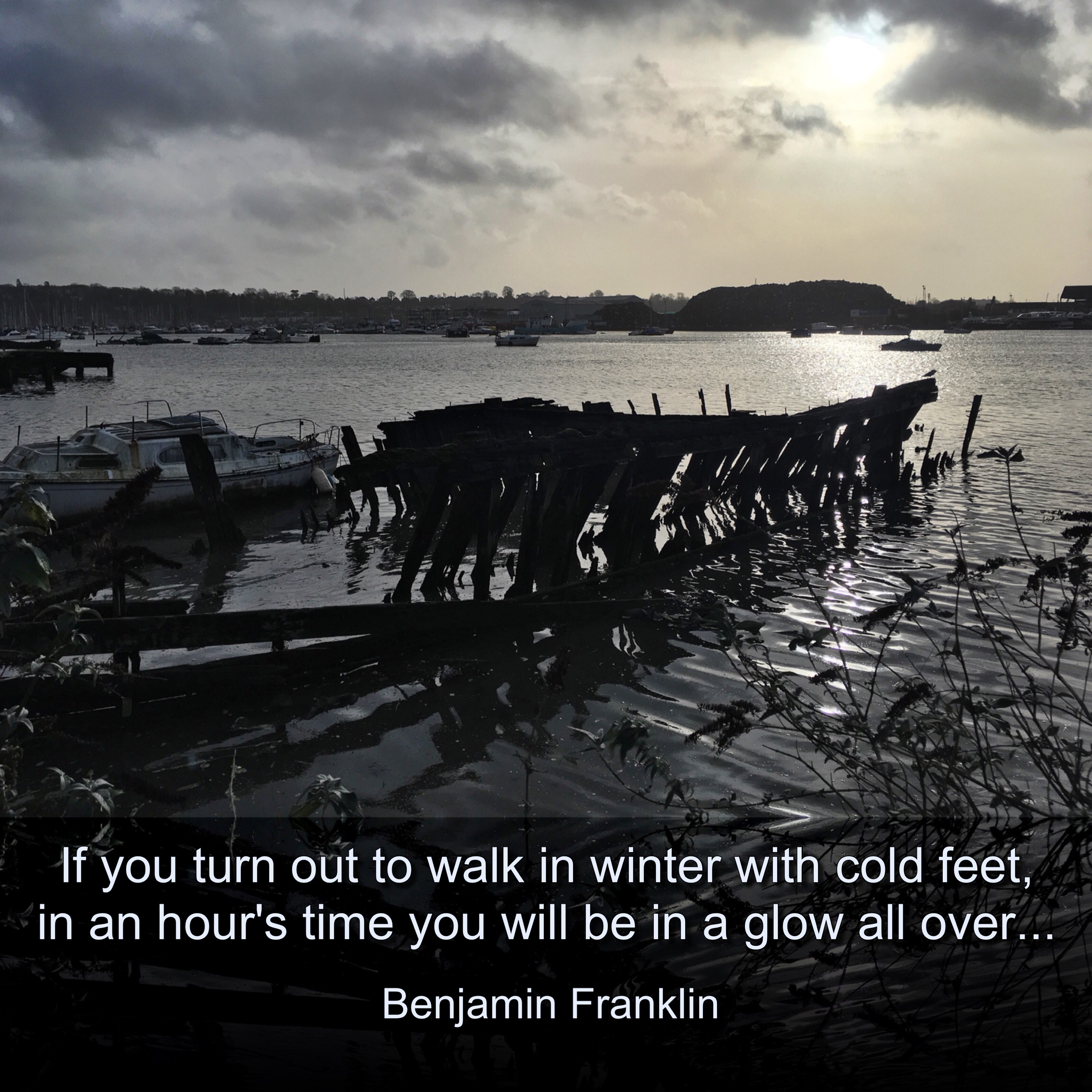 On tired legs I headed for Chessel Bay. There was one last climb before home. To steel myself for it I paused to rest and watch the swans on the water of the bay.  As first proper walks of the year go, it was a short one, not quite four miles, but the lack of breakfast made it seem more like a marathon. Next time I will learn the lesson and eat before I walk, or at least make sure I have some snacks in my bag. 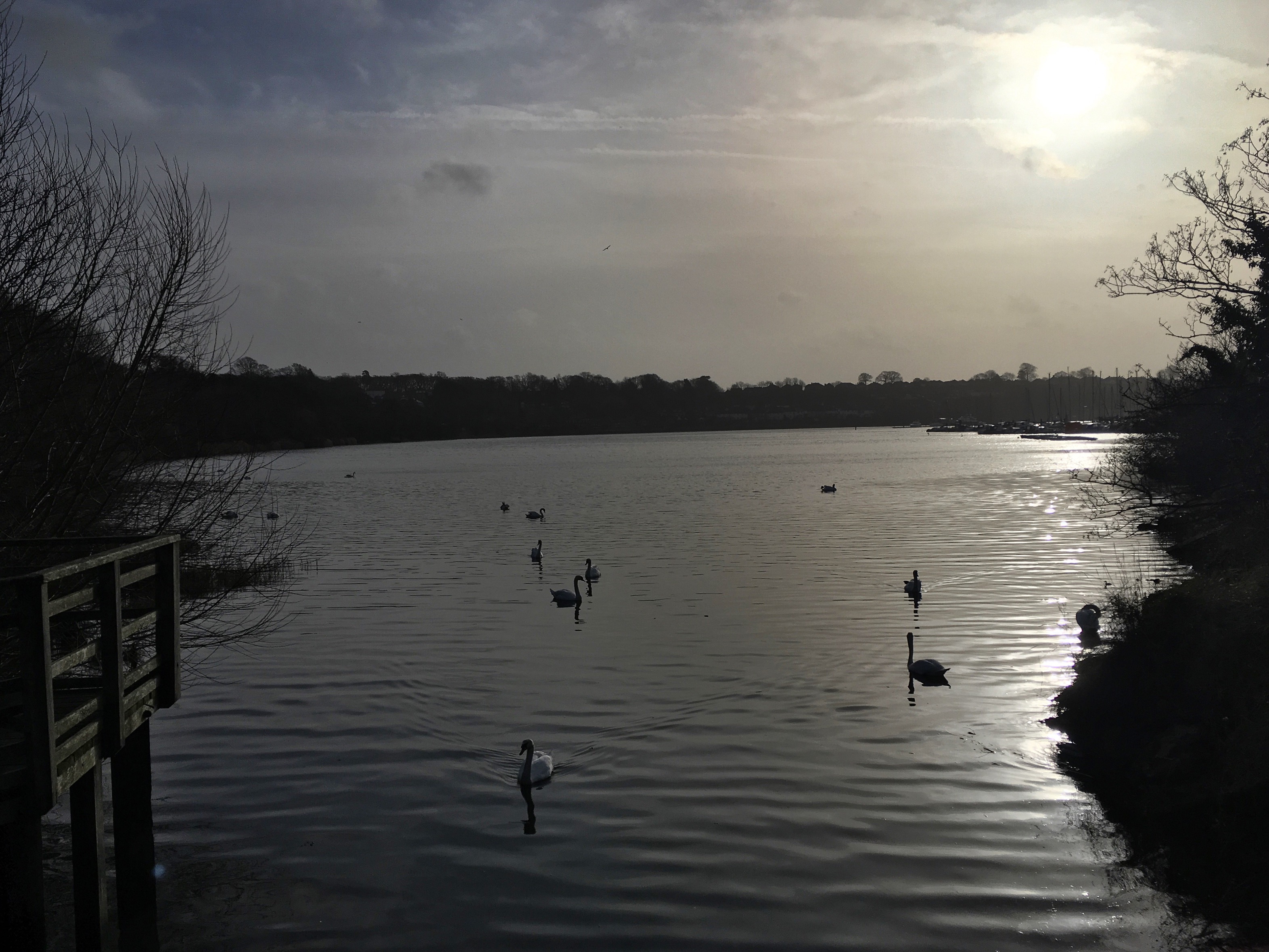