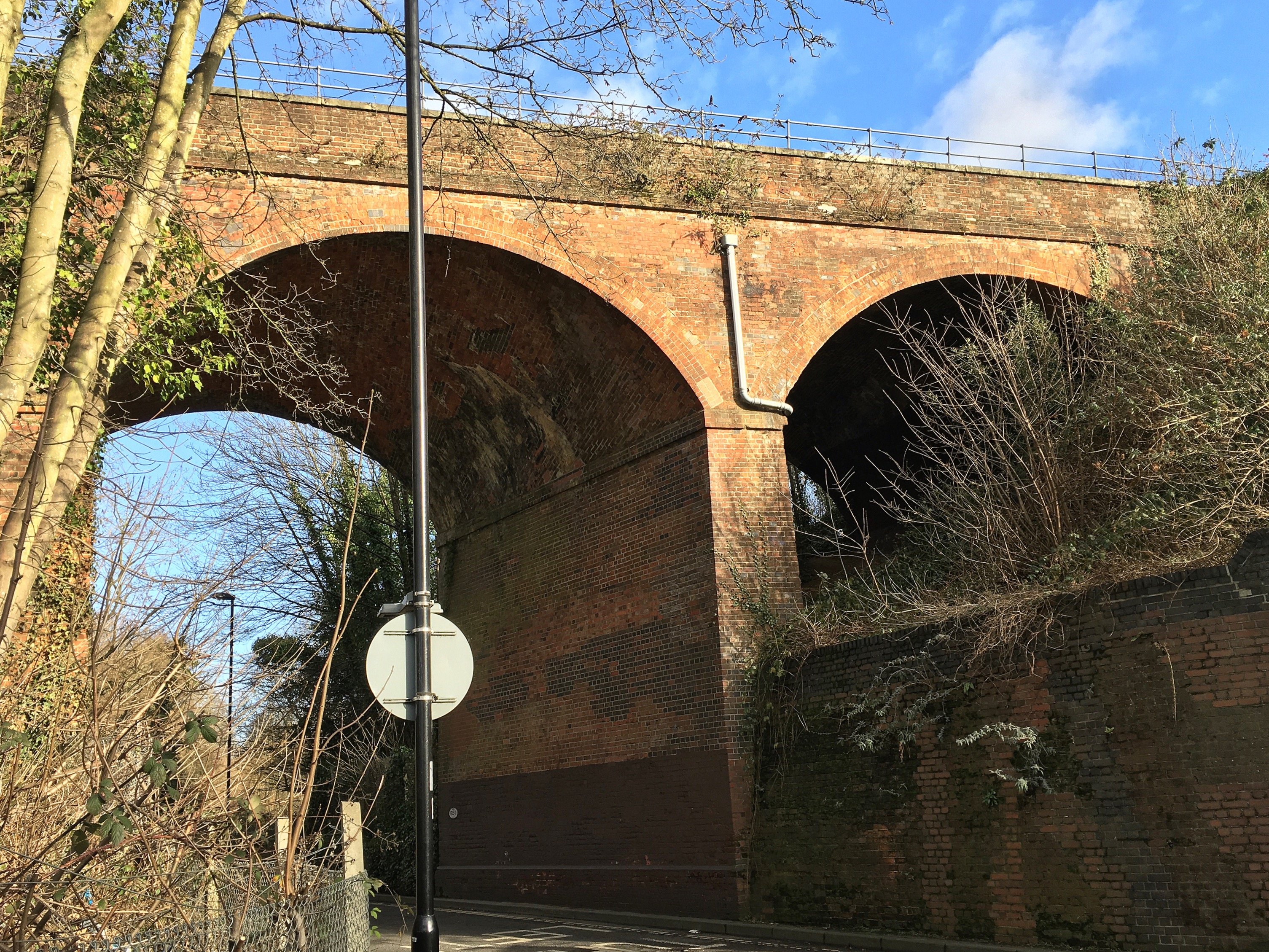 All my life I’ve lived near the sea. The lapping of the waves and the sound of fog horns is something I can’t imagine being without. Having said that, Southampton is hardly a seaside town. The little bit of seashore we have, less than a mile of shingle bordered by tall flats and a large council estate, could not be called a resort by any stretch of the imagination. Even so, it’s nice to walk along the shore and, today, the sea was calling me, despite the high winds I knew would make walking difficult.

Back in the tenth century Weston was a small fishing village outside the town of Southampton. The area between Woolston, Sholing and Netley was mostly woodland and marsh. By the early fourteenth century though, the Chamberlayne family owned most of the land that is now modern day Weston. They built a grand estate, Weston Grove, on the east bank of the Itchen close to the border with Woolston, with enviable views over Southampton Water. In the early nineteenth century part of this estate was sold off and two other large estates were created. Like most of the grand estates of the time, all three have been lost but, for my walk today, I’d thought I’d explore the little that is left of them.

As I wanted my walk to end at Weston Shore, CJ and I set off along Spring Road. Later we would realise this was a mistake but, for the time being, we were blissfully unaware of what lay ahead. When we passed under the railway arch beside Millers Pond we left Sholing and entered Weston. Back in the 1700’s the pond was a reservoir supplying Walter Taylor’s wood working mill on the other side of what is now Portsmouth Road. Weston mill was built on land purchased from Thomas Lee Dummer, Lord of Woolston, to make ships blocks but the water flow was so poor the works were moved to Woodmill and Weston Mill was abandoned.

The meagre stream running through Shoreburs Greenway through the pond is culverted under the road here and emerges on the edge of Mayfield Park at the bottom of Wright’s Hill. The Hill is named after Col. Robert Wright, who was either bequeathed the land by William Chamberlayne or bought the land from his son Thomas in around 1854. Whatever the exact circumstances surrounding his acquisition of the land, Wright, who originally lived in Oak Bank in Itchen Ferry, built Mayfield House, the centrepiece of the Mayfield Estate, on the site of the abandoned mill.

Last time we came this way we were walking in the opposite direction and, after negotiating a muddy and difficult walk, discovered the gate onto Portsmouth Road was padlocked. Luckily, someone had broken a hole in the fence so we didn’t have to retrace our steps but we never did discover why the gate was locked. When we finally got across the road today we discovered the Lock was still in place, although, with the fence down, this seems fairly academic. 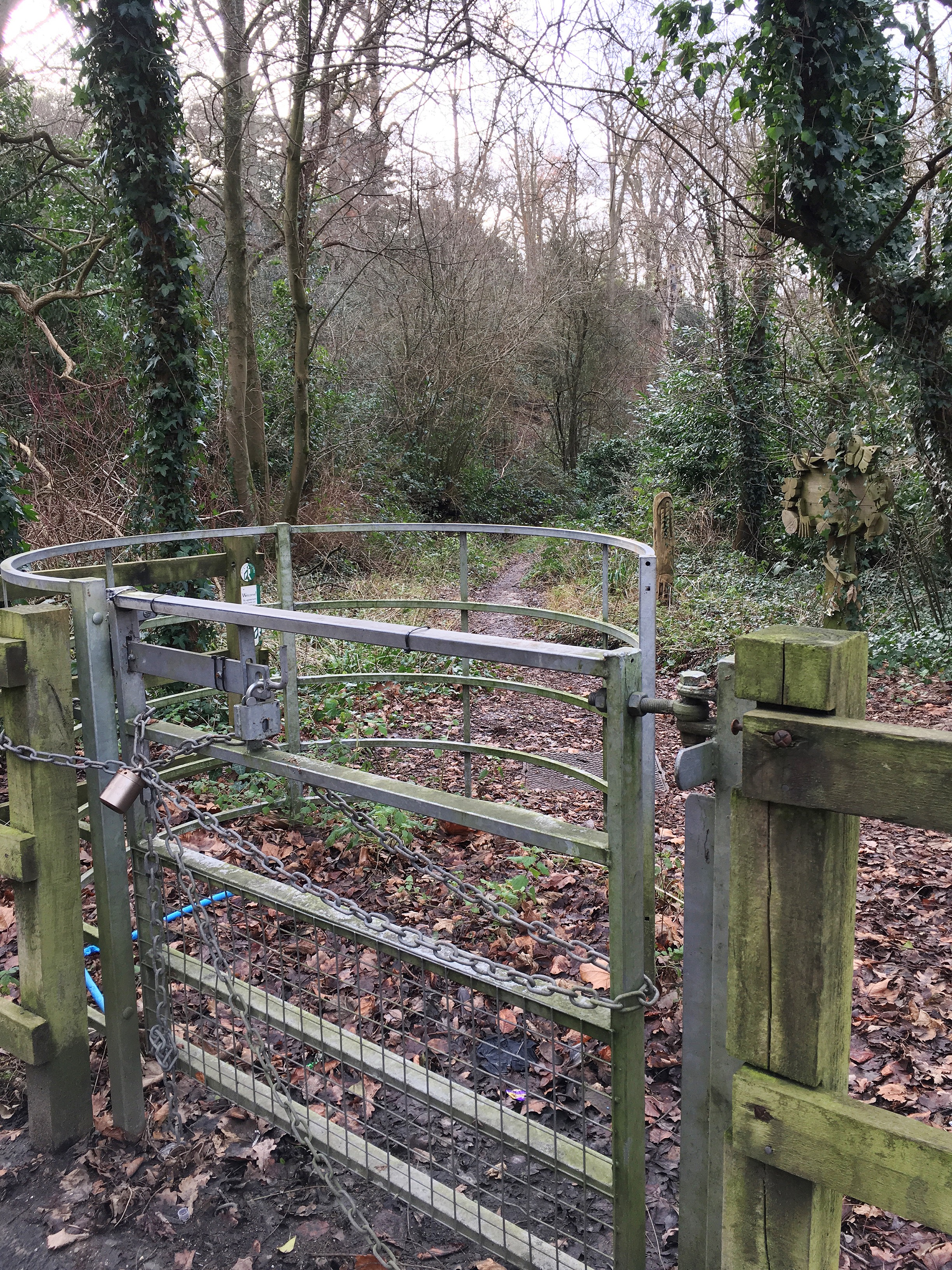 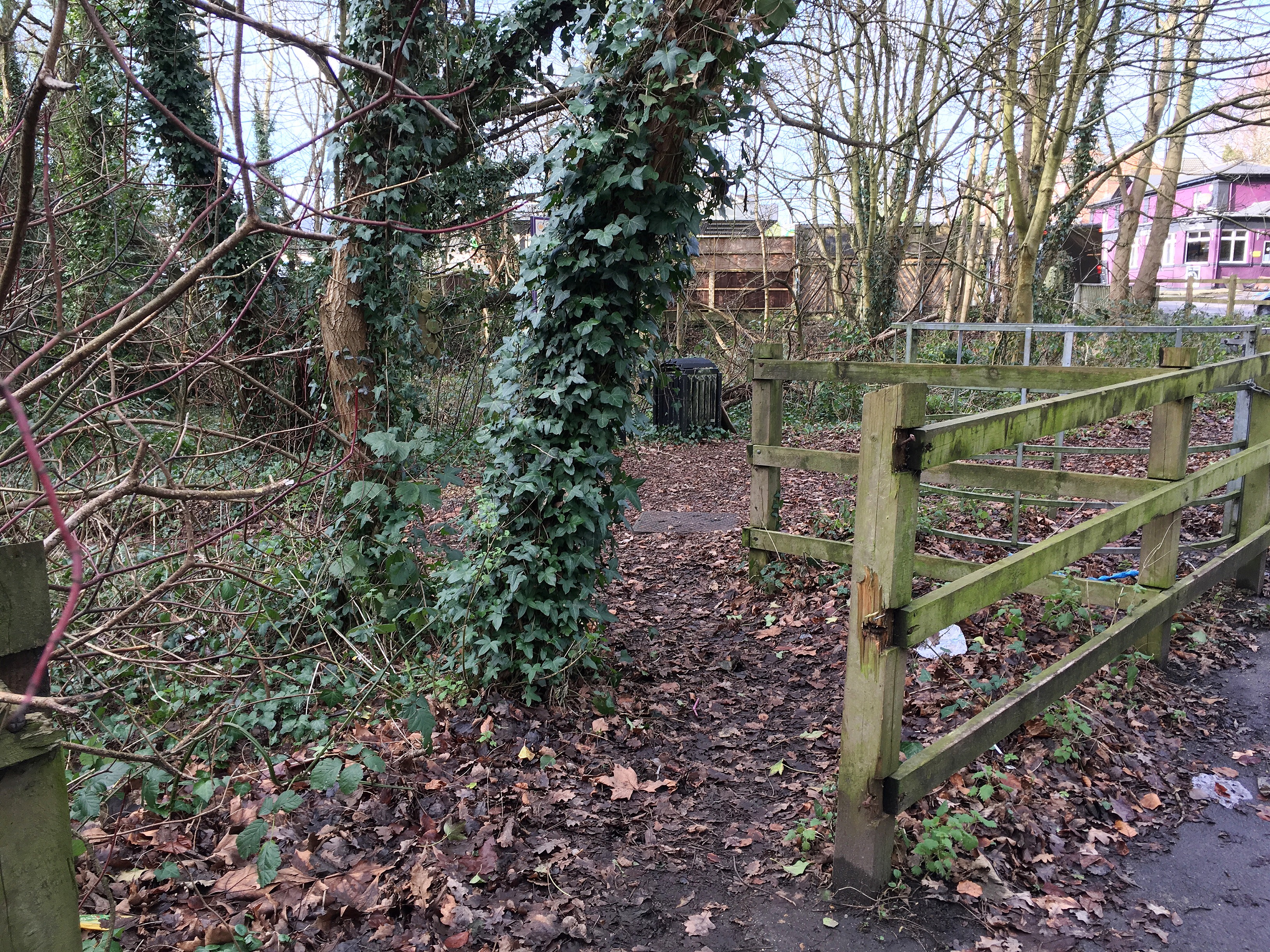 Normally we’d take the butterfly trail to the shore but our walk today was about the lost estates of Weston so we turned left and headed up Wright’s Hill. With our last walk in mind and all the recent rain, the trail through the wooded valley would probably have been impassable anyway but we did take the steep trail up the hill rather than the paved road route. 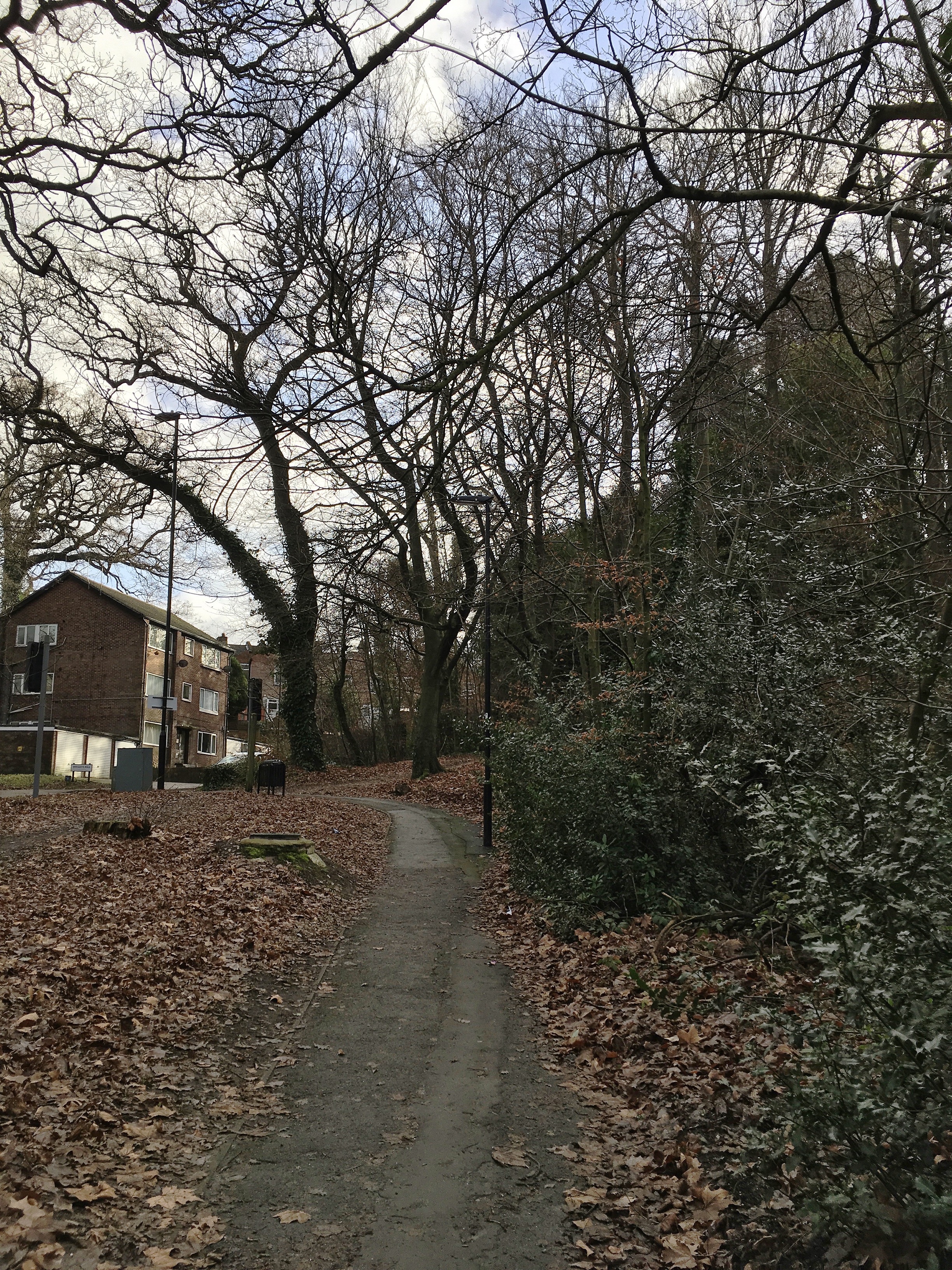 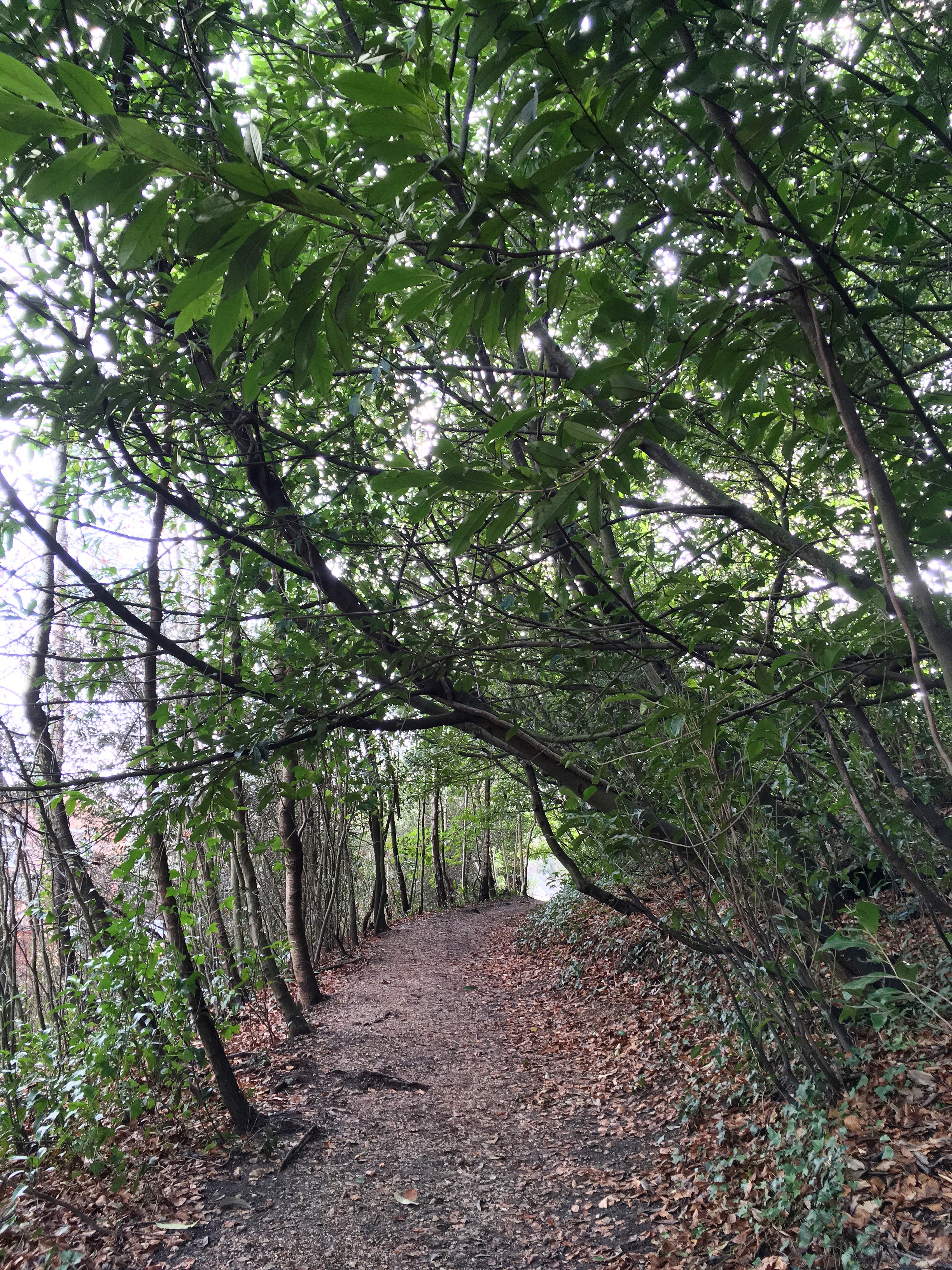 At the top of the trail we came to one of the few remnants of the Mayfield Estate, the old stable block, now used as a council depot. The stable, with its lovely cupola and clock, was built at around the same time as Mayfield House and is a listed building. It was here we turned off into the park. 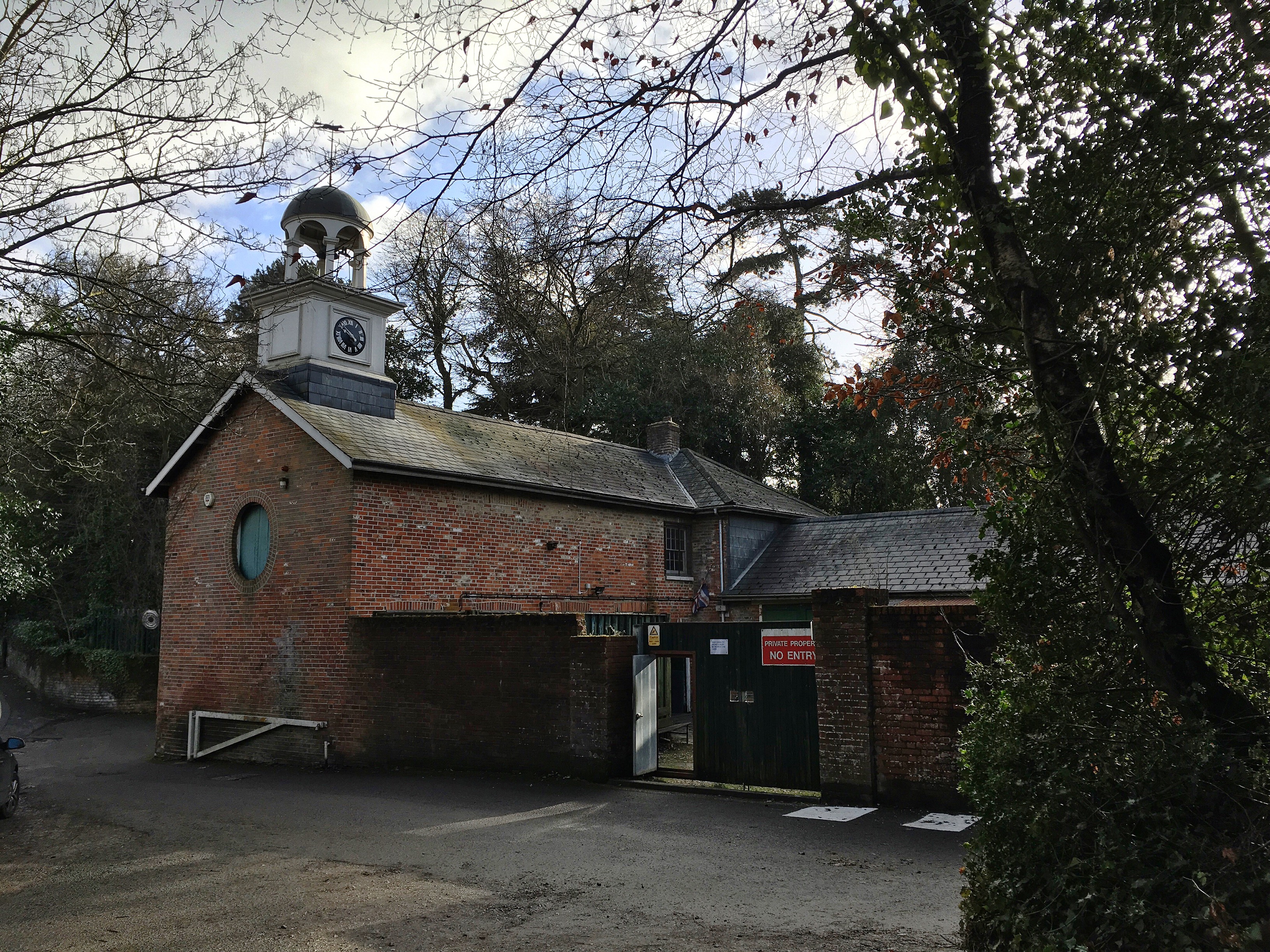 There is nothing at all left of the house now, although, as the few remaining photos of it show, it was one of the grandest in the area. Sadly, Robert Wright never lived to see it completed. In 1889, Granville Augustus William Waldegrave, the third Lord Radstock, bought the house. He had worked as a missionary in Czarist Russia and was portrayed by Tolstoy in Anna Karenina as Sir John. 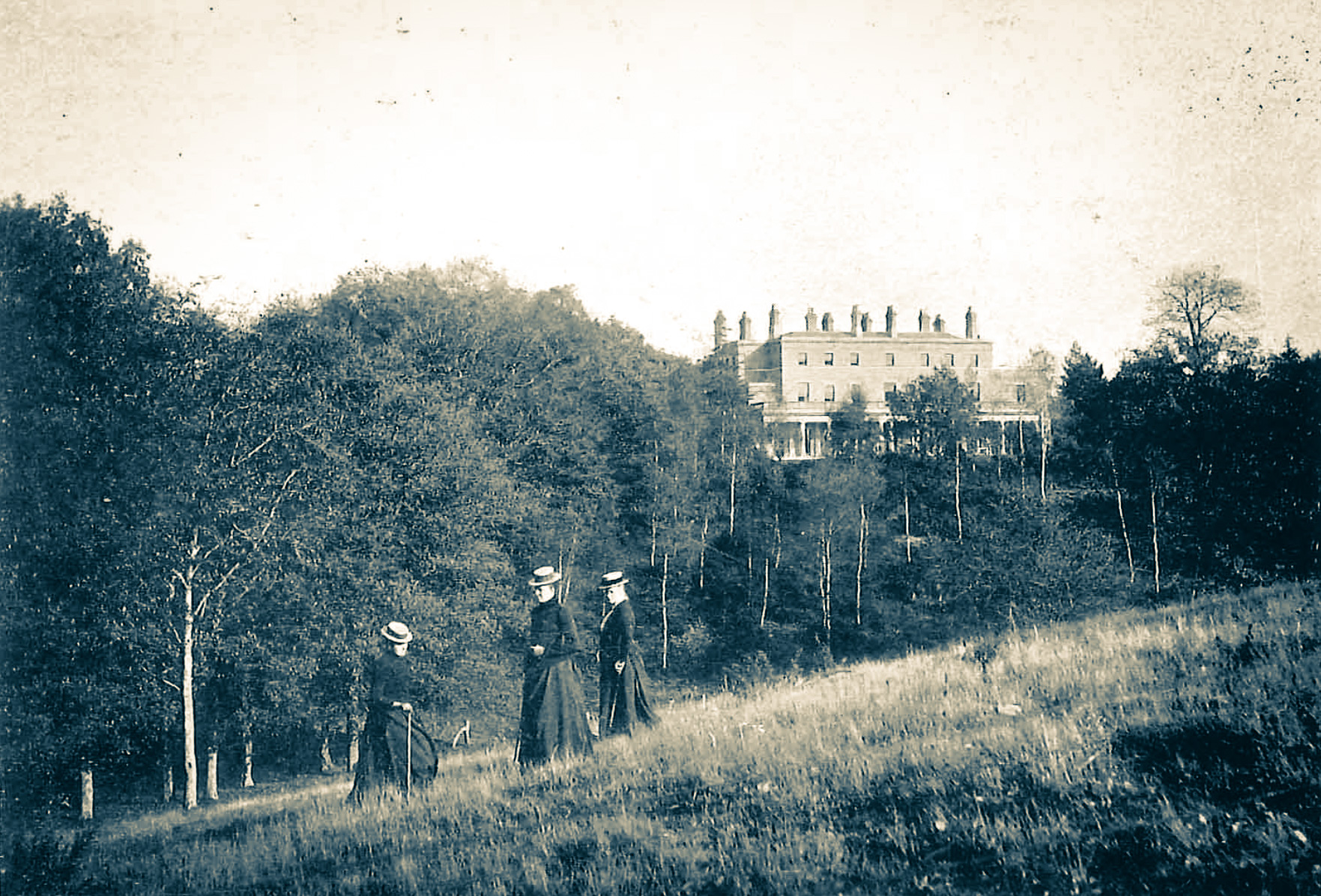 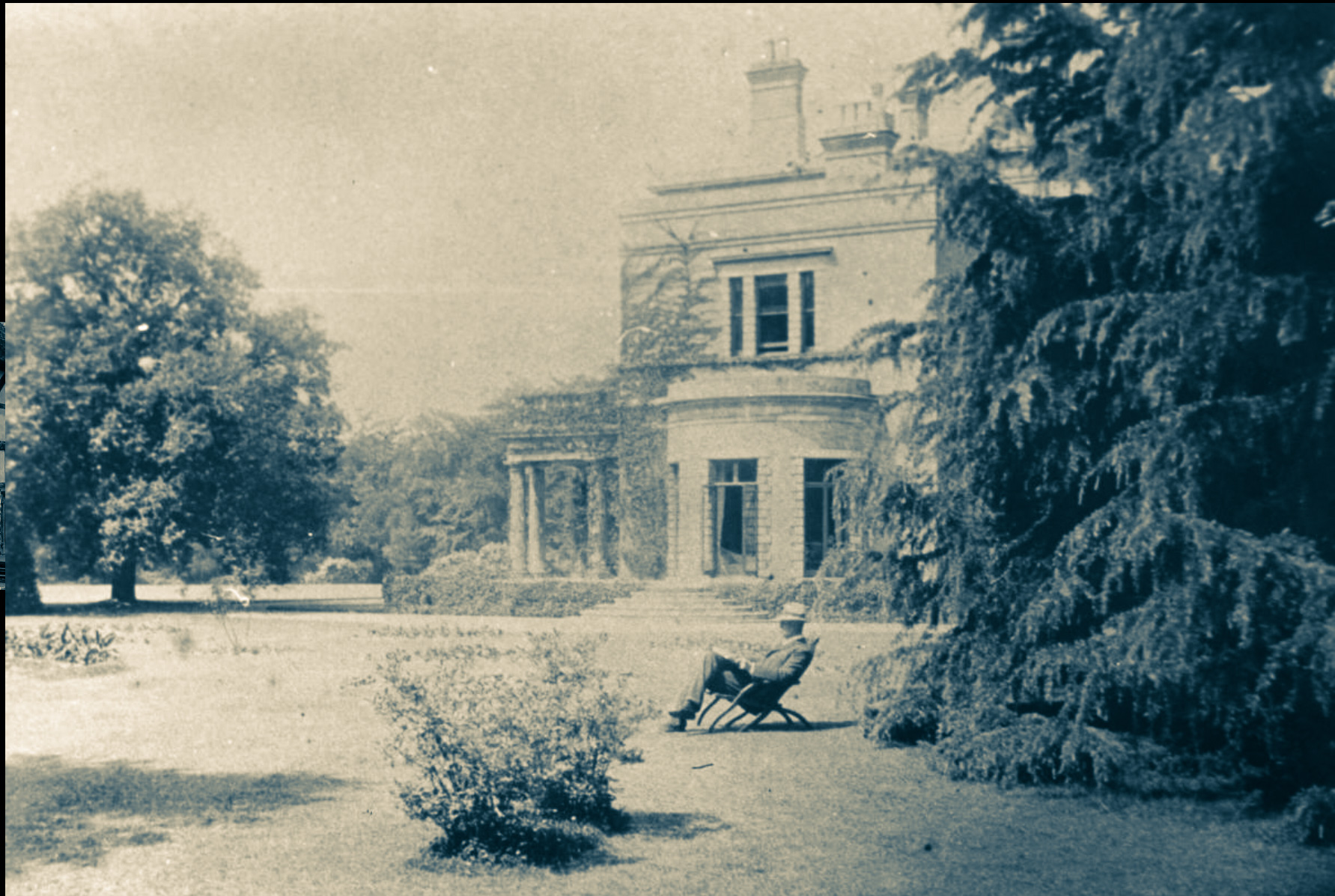 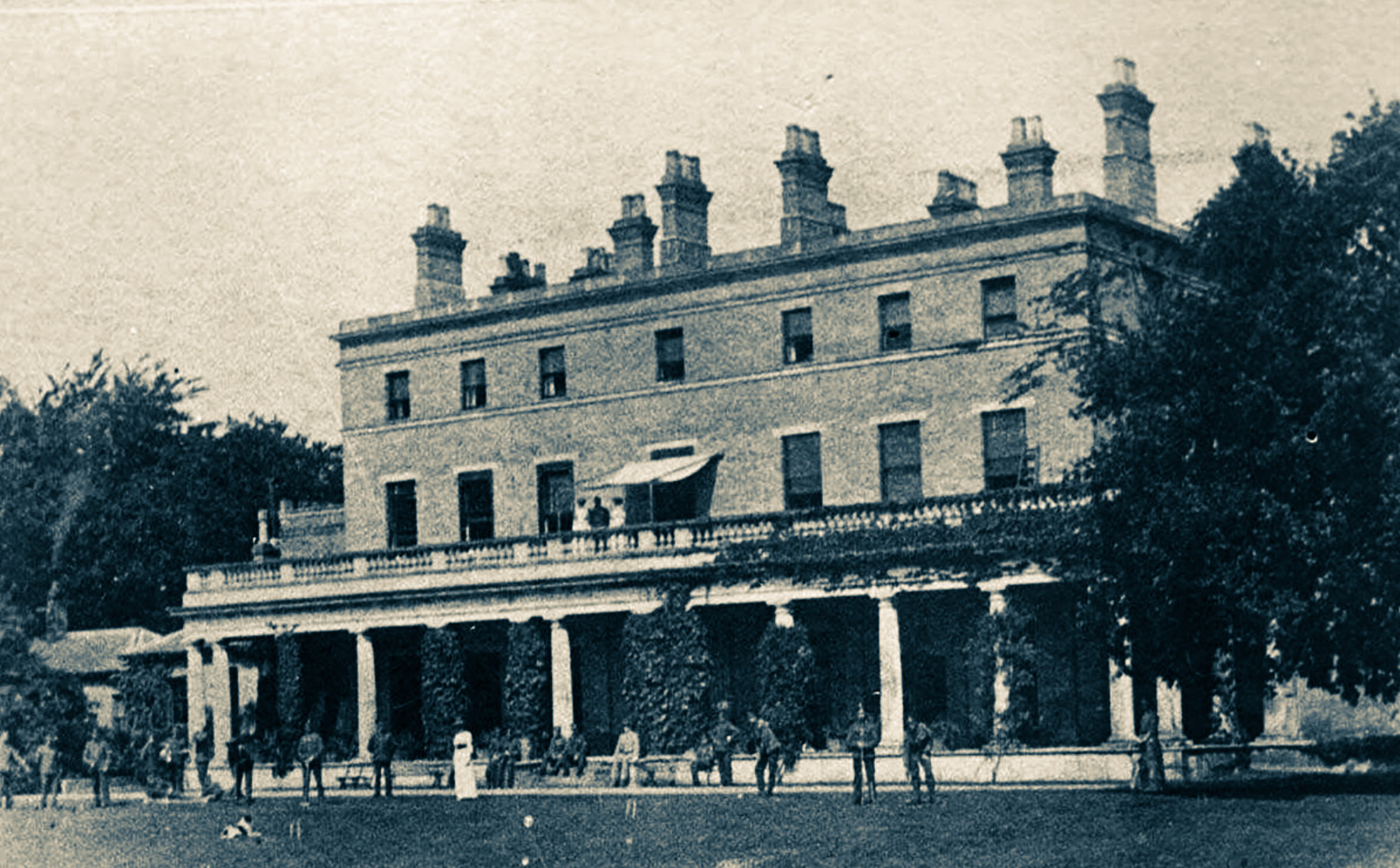 On Lord Radstock’s death, in 1913, his title and the house passed to Granville George Waldegrave. During World War I the House was used as an annexe to the Royal Victoria Military Hospital. After the war though, so many young men had been lost it was hard to find enough labour to maintain the estate. When the fourth Lord Radstock died, in 1937, his seventy year old brother, Montague Waldegrave inherited the title but the estate was sold to Southampton Council for £23,500. Due to a covenant in the fourth Barron’s will, the land had to be kept as an open space. Thanks to him we are able to walk through the beautiful park with its winding woodland trails, hidden gardens and large open grassy spaces. 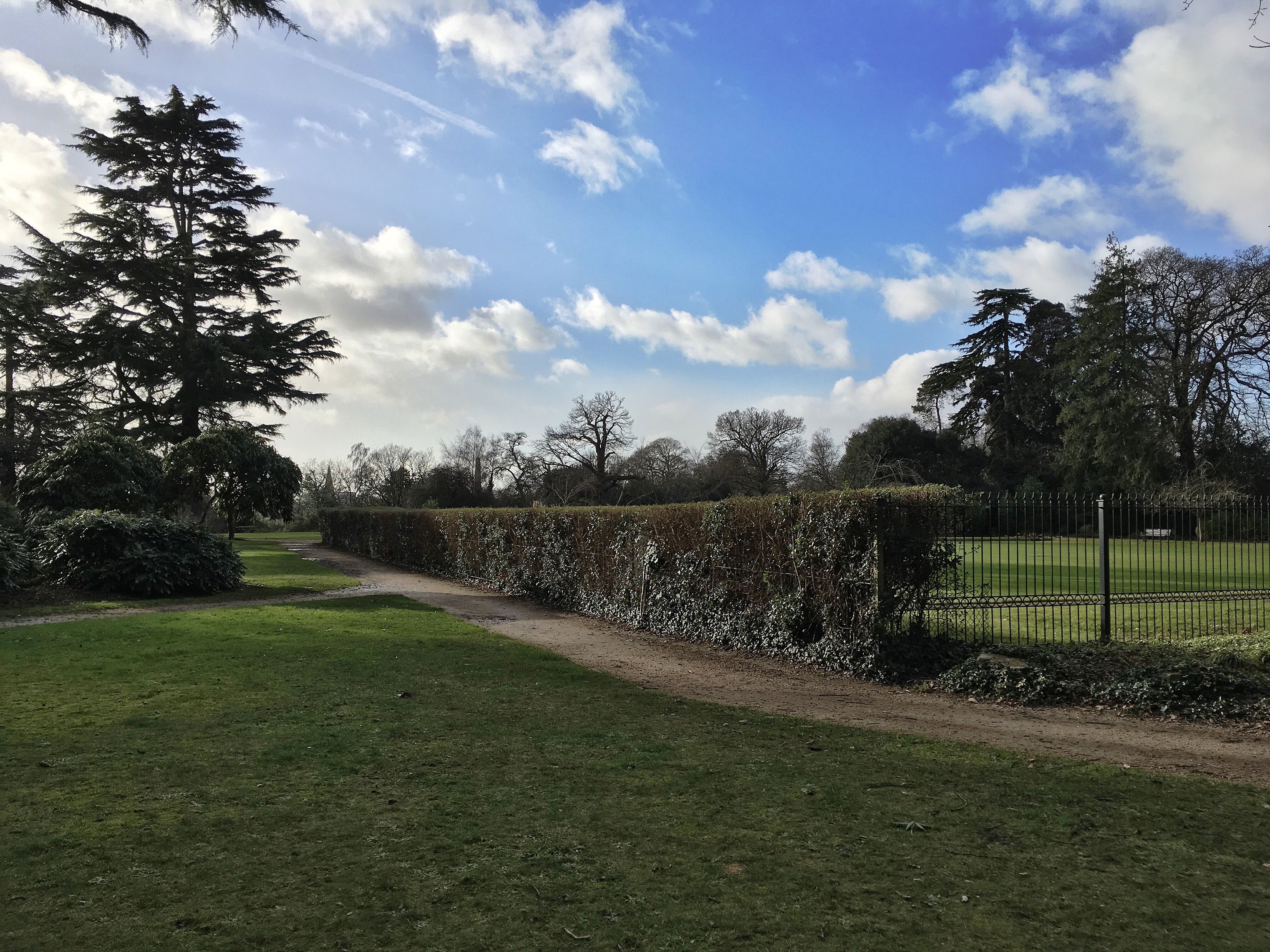 As we passed the neatly clipped lawns of the bowling club, close to the site of Mayfield House, it was tempting to walk behind the Mayfield Nursery and explore the lovely hidden garden there. At this time of year it’s doubtful there would be much to see though and there was still another remnant of the estate to see before we headed for the shore. We were now walking on the drive that once led to Mayfield House and, as we approached the gates we came to the Lodge House, built in around 1860 as a gatehouse. Today it is a private residence, although it is within the perimeter of the park. 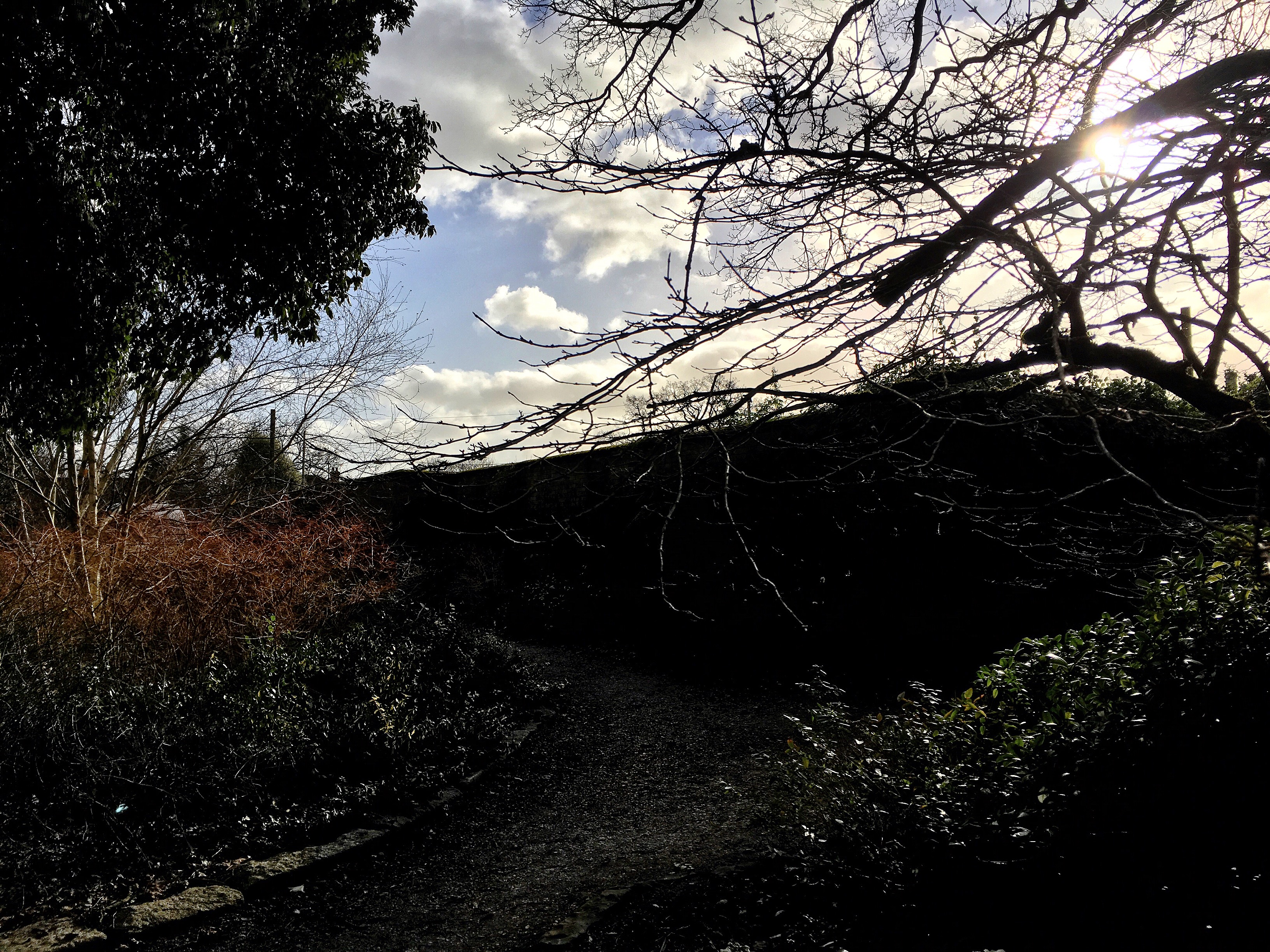 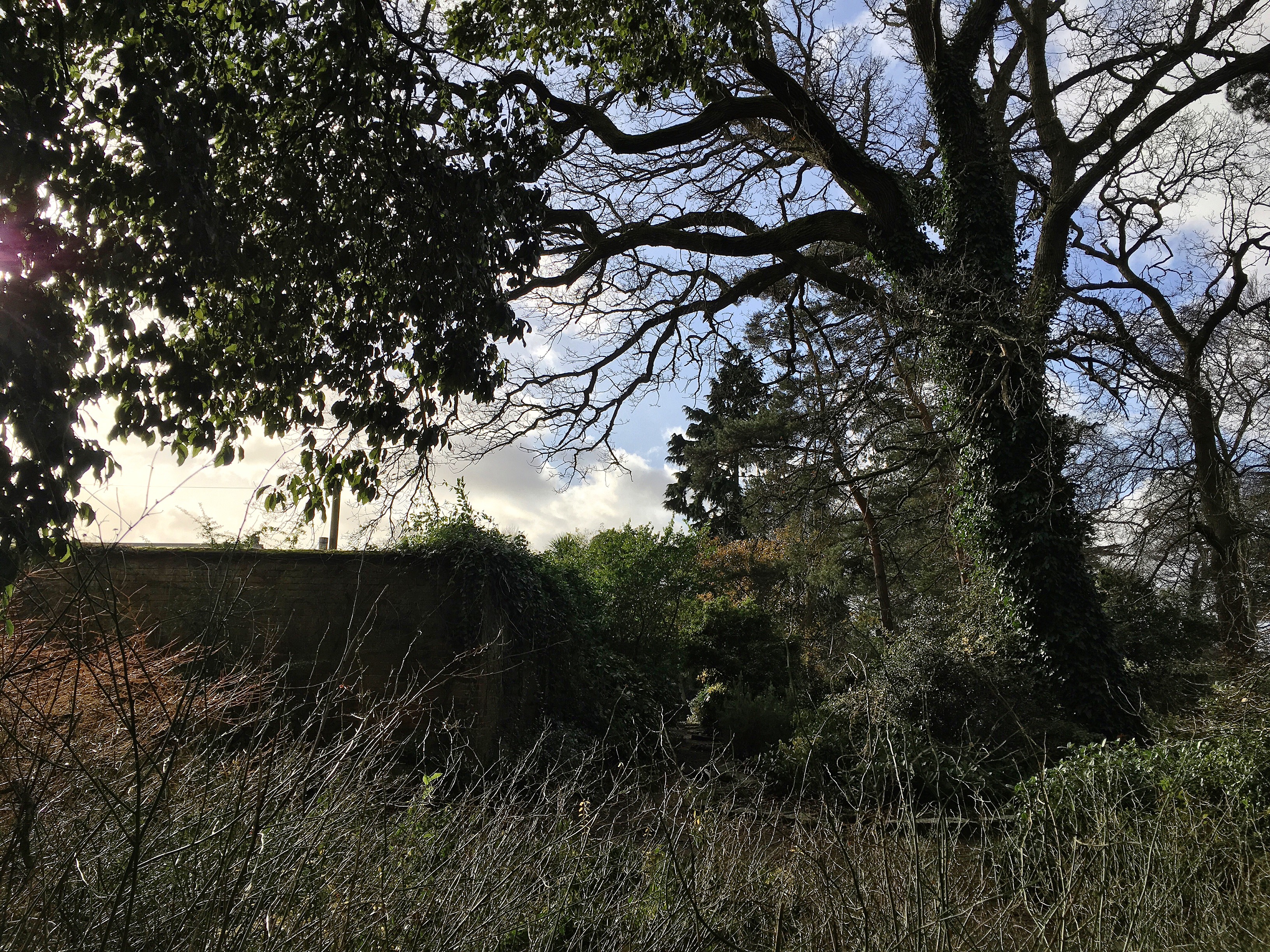 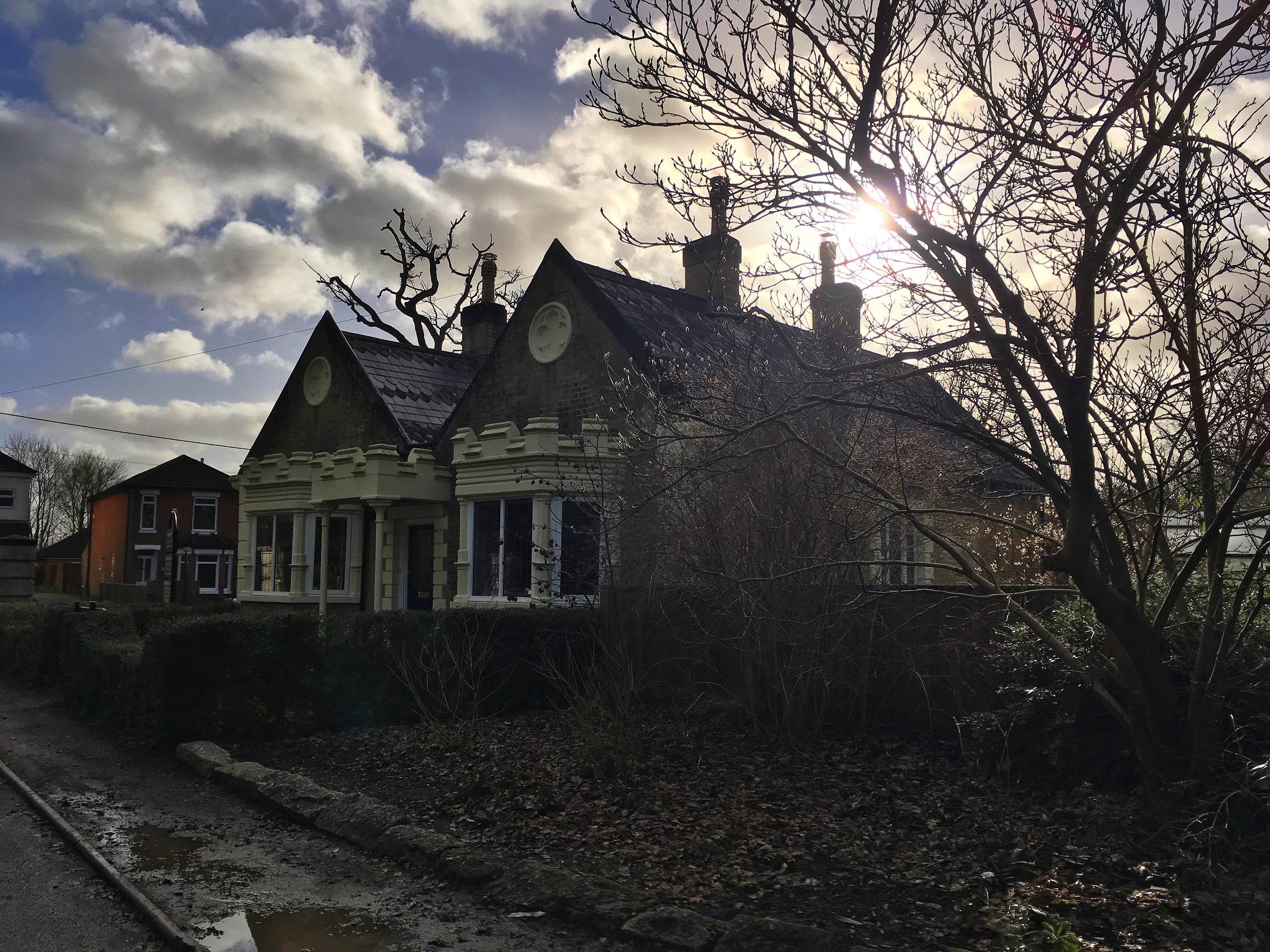 The lovely double fronted cottage with its, ochre bricks, bay windows and porch topped by crenelated stonework always gives me a major case of house envy. Imagine living in such a wonderful house on the edge of such a lovely park! Luckily, like the stable block, it is a listed building so it’s protected from the developers. 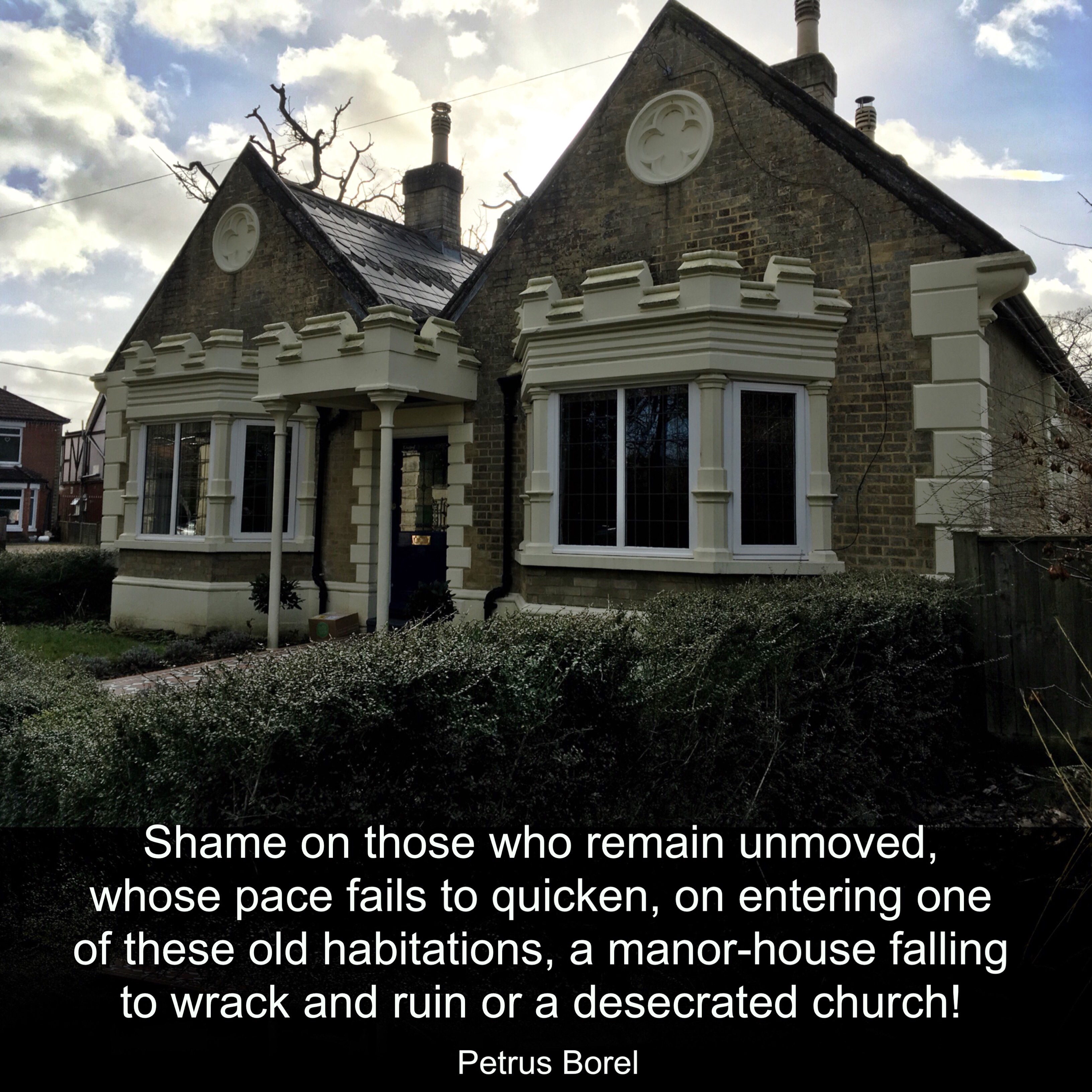 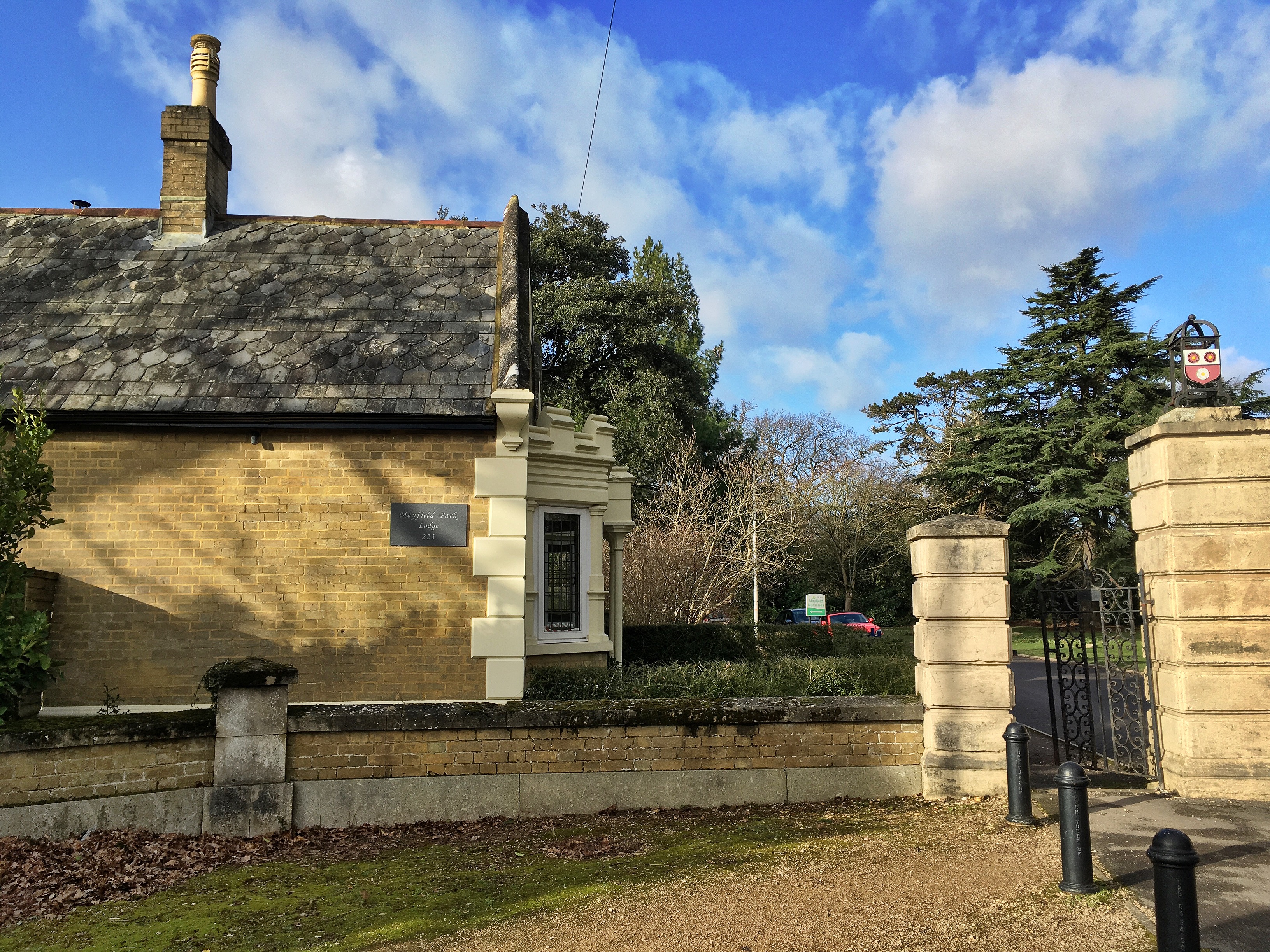 Sadly, the big house didn’t fare as well as its outbuildings. The council originally planned to use it as a museum but the beginning of World War II put paid to their plans. In 1944 the grounds were used to assemble troops and equipment for D-Day.  During the war the house was damaged by bombing and, when the war ended, it was used as accommodation for homeless families. There were forty rooms, twenty three of them bedrooms. Despite its original grandeur, it wasn’t really suitable for this kind of housing though and there were many complaints from the families. Eventually they were moved to new council houses, many in Milbrook and the house was left to crumble. Soon it was nothing but a ruin. All the windows were broken and parts of it had collapsed. Finally, in 1956, it was demolished. A sad end to a wonderful old house. 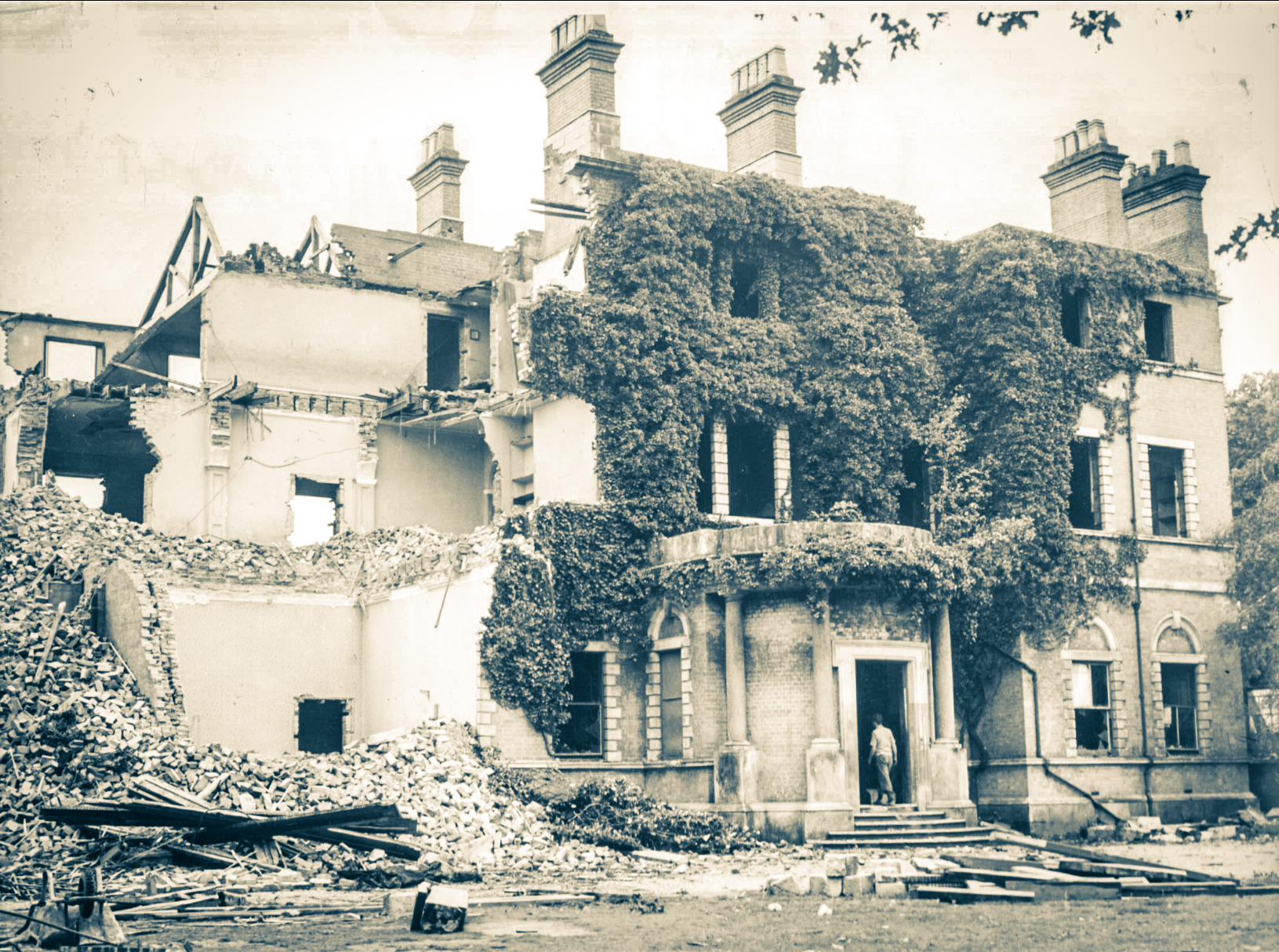 We walked through the gates and onto Weston Lane. There was one more piece of the Mayfield Estate for us to see. Above the wooded valley with its trickling stream and butterfly trail is a large expanse of flat grassland, part of the park opened in 1938. In the 1970’s my sister, Alex, lived close to the edge of this and, when I stayed with her in the long summer holidays, I would sometimes take my nephews there. On the far side, nearest the Lodge and Bowling Club, there was a small play area with a tall slide. The slide, I remember, was metal, and on hot days it would burn bare legs.

Mother always warned us to stay on the grassy hill and not to venture down the steep banks into the dangerous woods. These days I spend most of my time doing the opposite. The winding trails seem far more interesting than the flat grass. Today though, I wanted to see the Obelisk, built by William Chamberlayne in 1910 when the land was still his. Originally, the tall column of Portland stone was a memorial to Whig politician Charles James Fox and was called the Fox Memorial.  After Col Wright bought the land, his son, a captain in the 4th Dragoon Guards, dedicated the memorial to his two favourite horses and they are rumoured to be buried beneath it. He had their names engraved in the Obelisk but, later, Lord Radstock had them removed and added his own inscription, “The earth is the Lord’s and the fullness thereof – Psalms 24.1.”

When CJ and I reached the Weston Lane entrance to the park I’d planned to walk across to the Obelisk and take a photo or two. What we found though, surprised me so much, I totally forgot. Since last summer, when I last ventured onto the top of the park, a new play area has sprung up. It is dominated by a climbing frame in the shape of a Spitfire and I was so enchanted by it, all thoughts of the Obelisk flew out of my head. 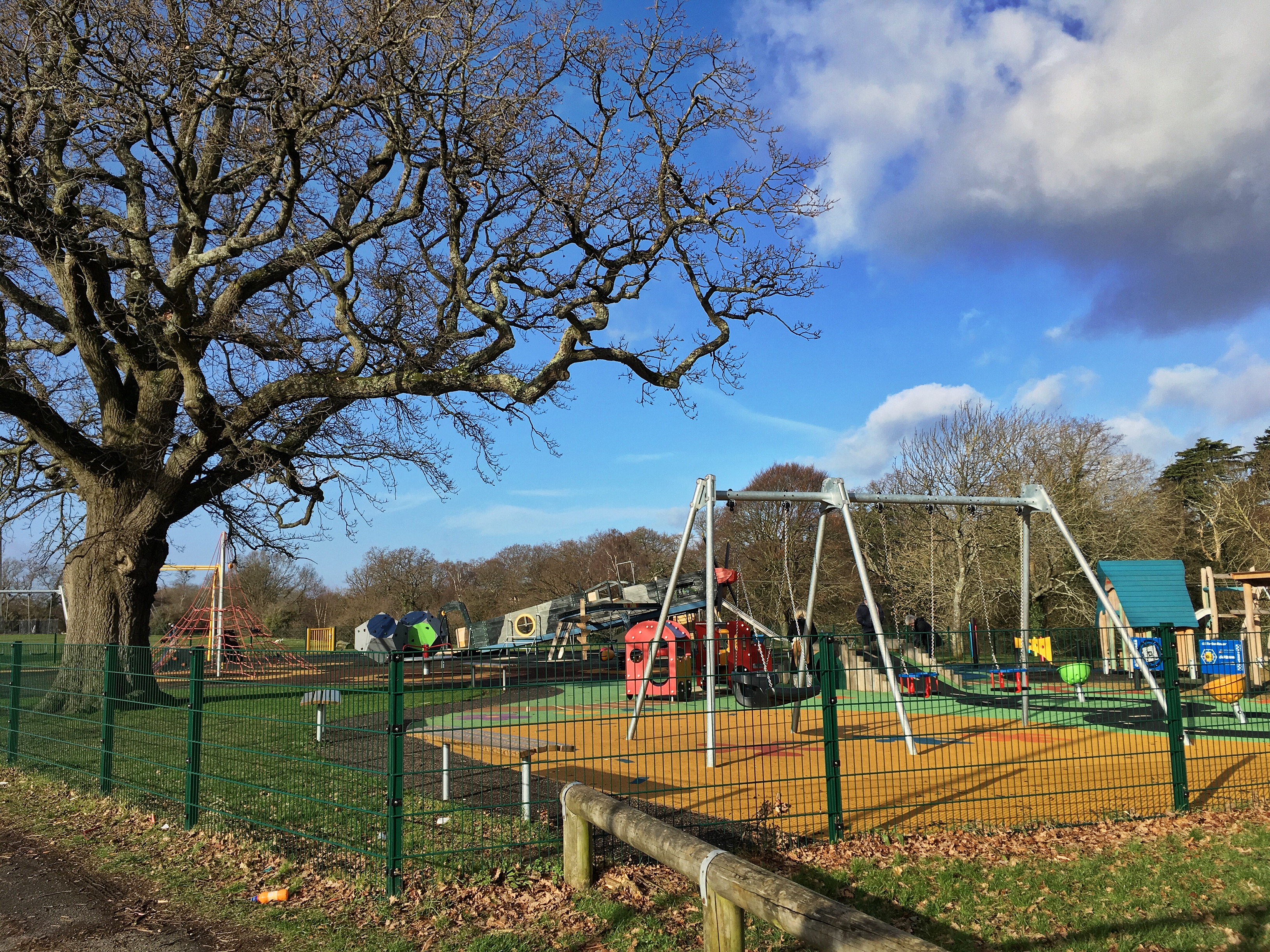 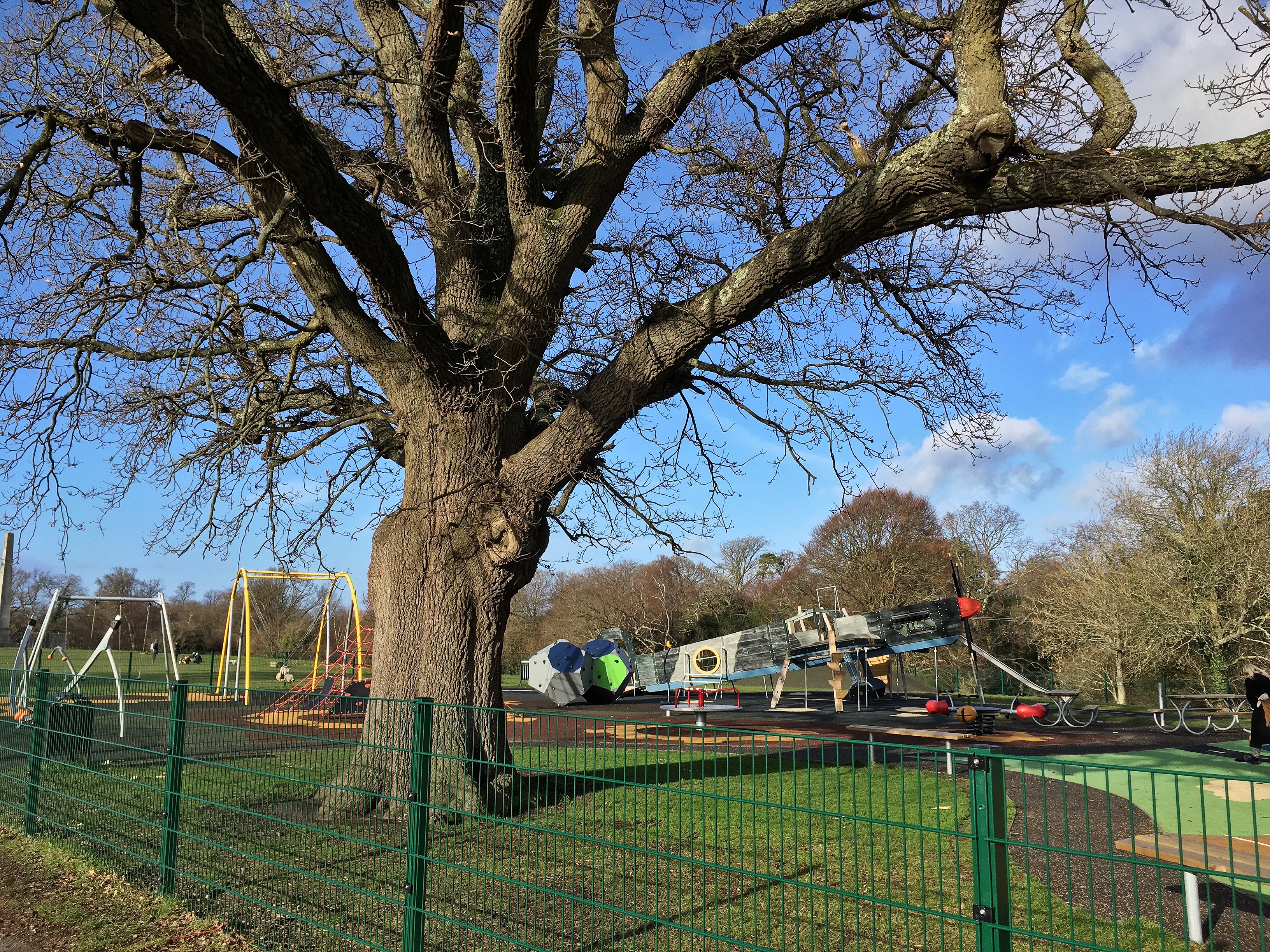 The photos I’d planned of the grassy field and the Obelisk were never taken, although you can just see the Obelisk behind the swings in one of the pictures I did take. As I rarely walk on the field, photographs of it and the monument are few and far between so I’m quite cross with myself for getting so easily distracted. The only picture I could find was taken on a rare snowy day in February 2015. It will have to suffice. 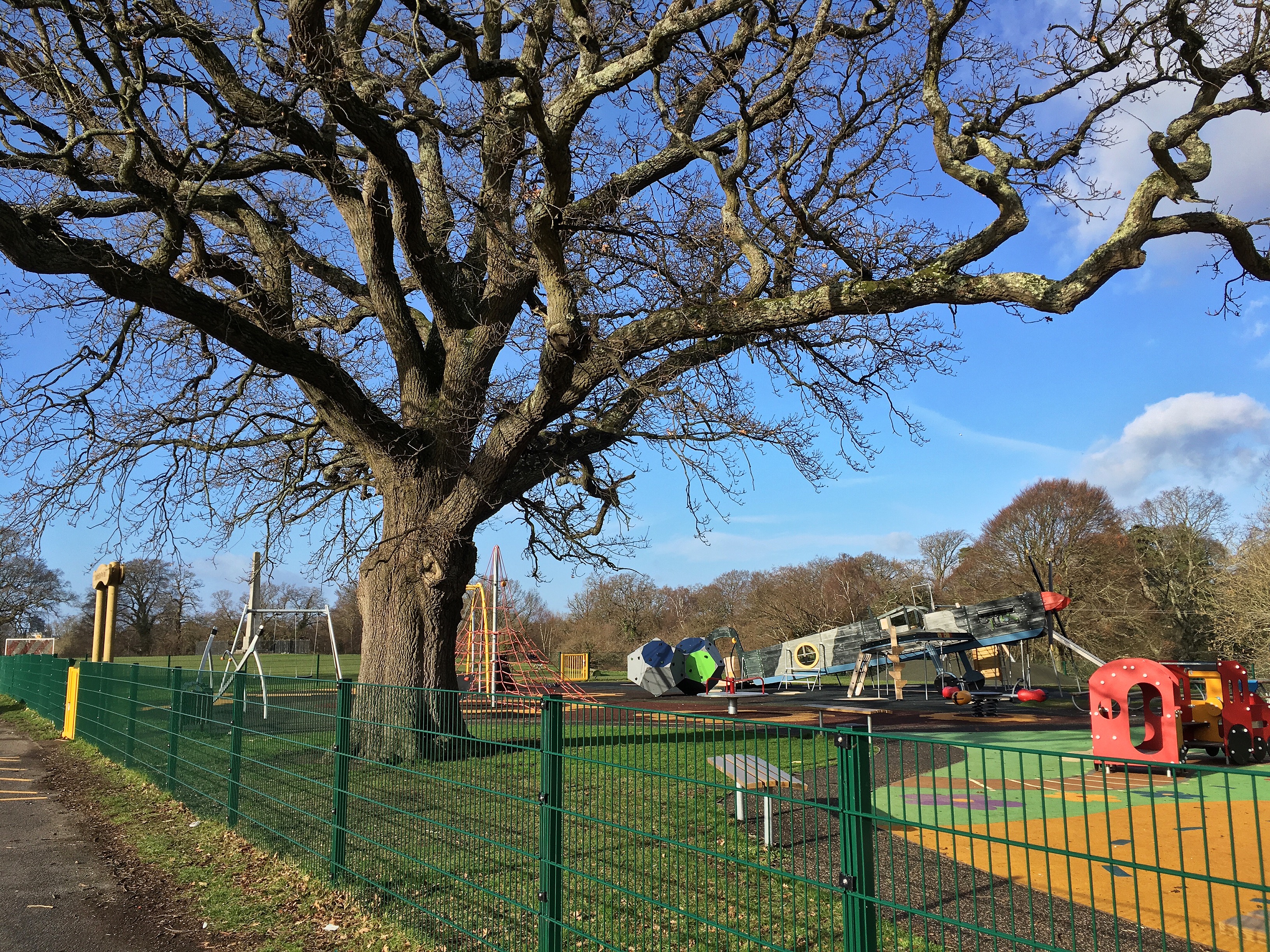 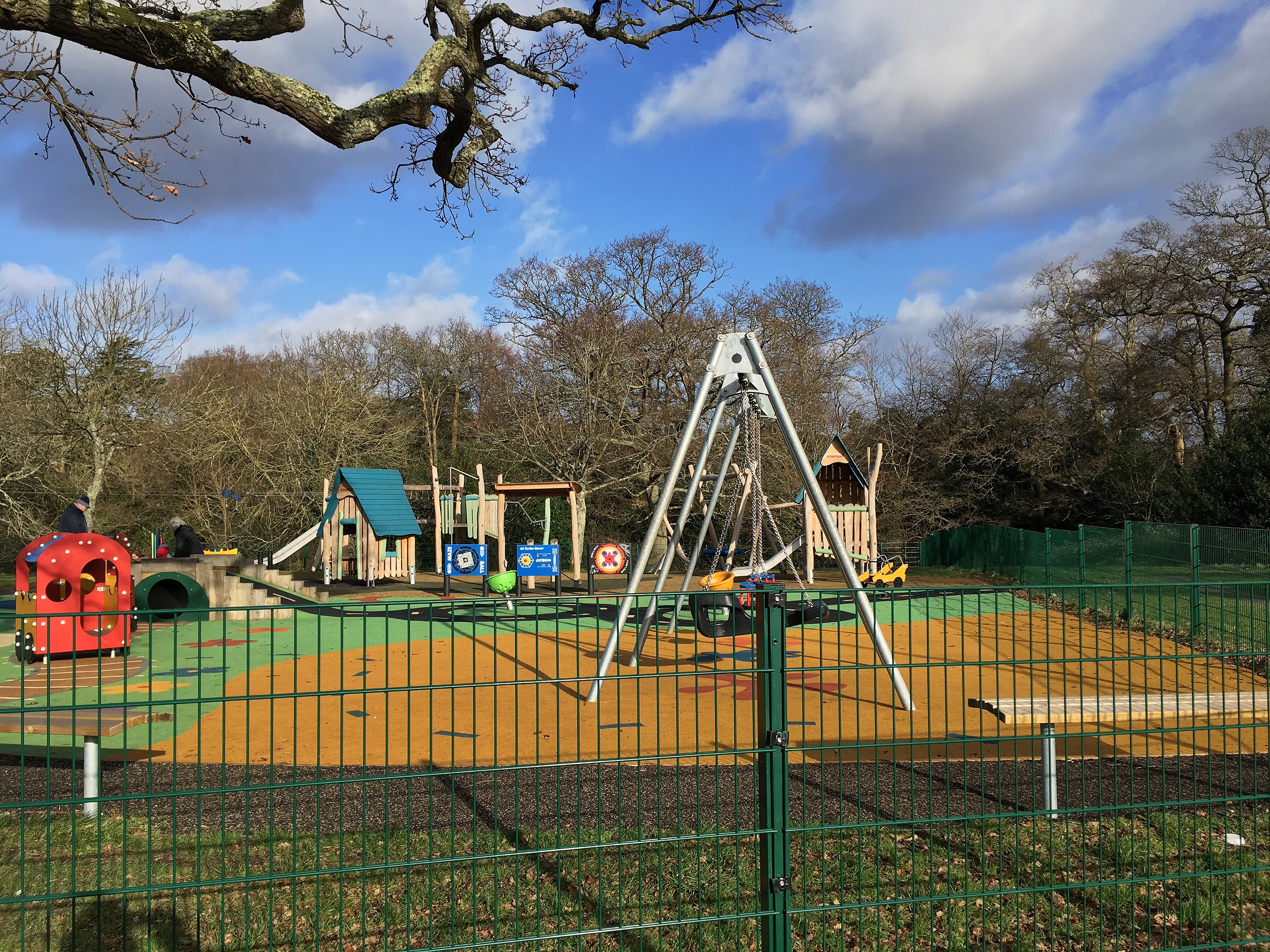 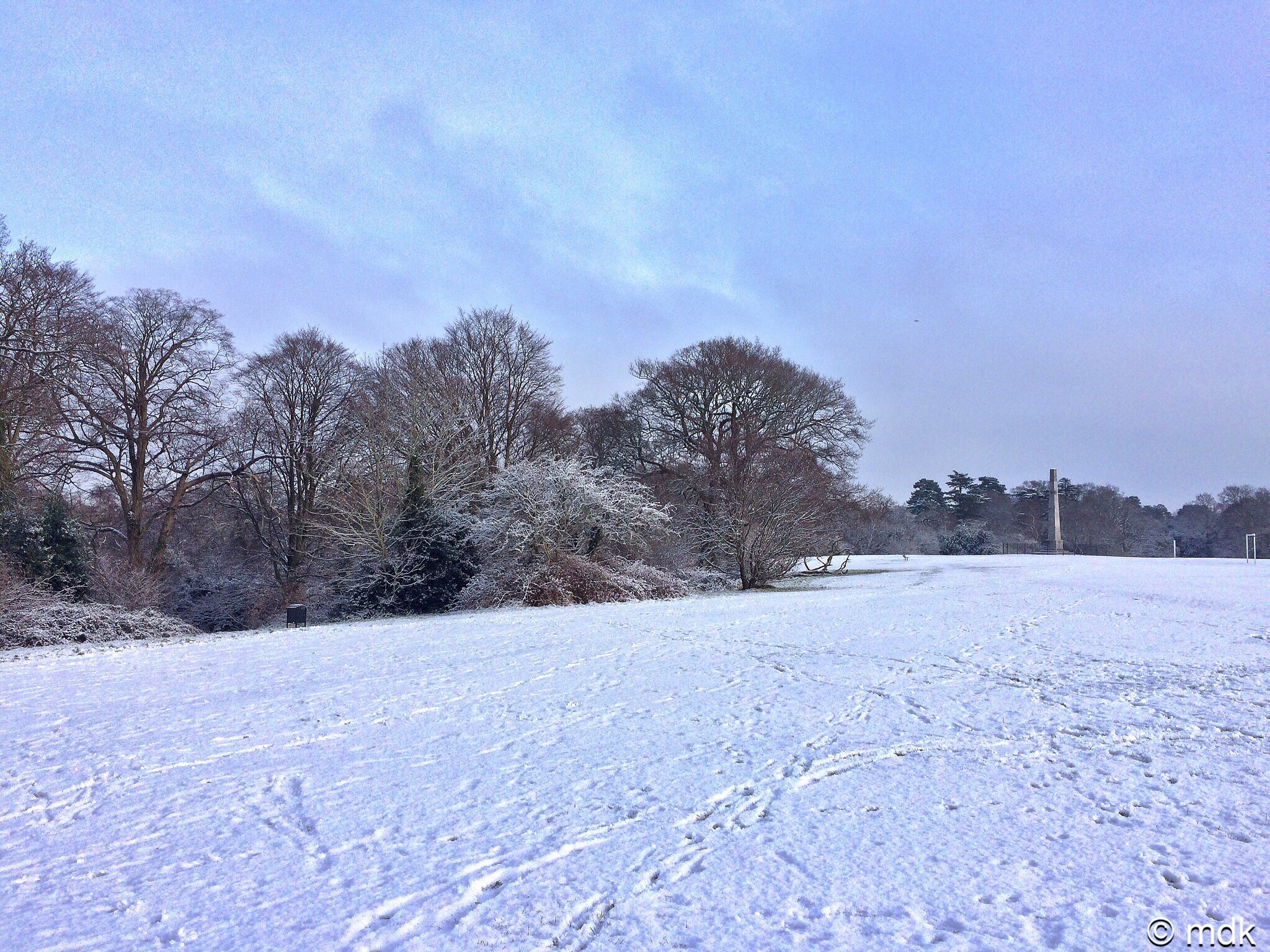 Now we’d seen all there was to see of the lost Mayfield Estate and it was time to move on. There were two more lost estates to explore and we were headed down Weston Lane to find them.

16 thoughts on “The lost estates of Weston, Mayfield”