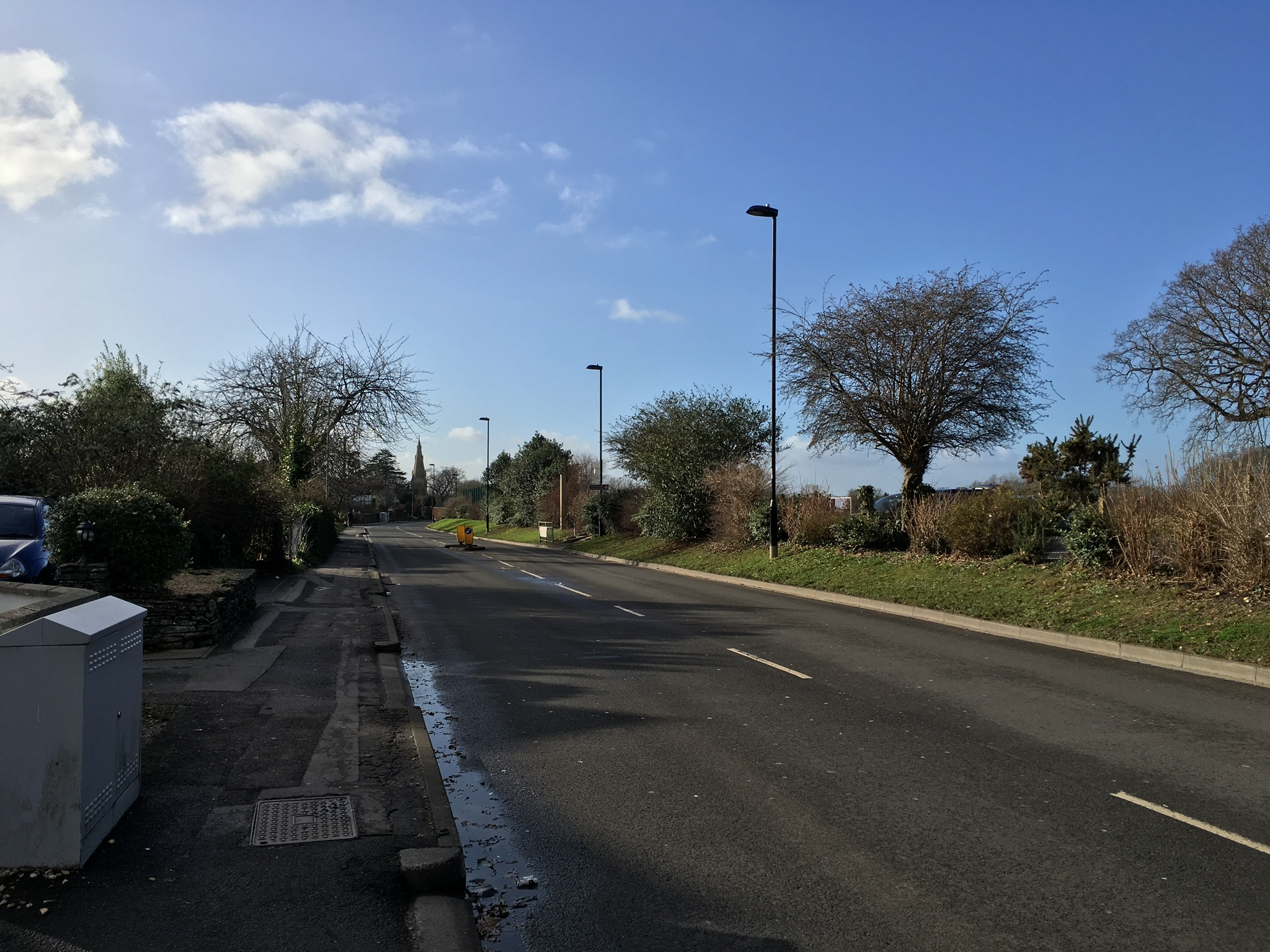 Walking down Weston Lane it was hard to believe the land around us as far as our eyes could see once belonged to one family. In fact, the Chamberlayne family  had owned all the land as far as Netley, including the abbey, since the early 1400’s and had another estate, Cranbury Park in Hursley. In those days Weston Lane was nothing but a narrow wooded lane bisecting the Weston Grove Estate and leading to the tiny fishing village of Weston. We tried, but failed, to imagine it as it was.

The Chamberlayne family descended from Count John De Tankerville who came to England from Normandy with William the Conqueror. The De Tankervilles, named for their castle at Tancarville near Le Harvre, were hereditary chamberlains to the dukes of Normandy. After John came to England he became chamberlain to King Henry I and, when his son, Richard, became Chamberlain to King Stephen, the family changed their name to Chamberlayne.

In the very early 1800’s, when Southampton MP William Chamberlayne built Weston Grove House he also built two arched bridges over the lane. One, not far from his Obelisk, connected the carriageroad to the house, the other, near the bottom of the lane, presumably gave access to the shore. These bridges became known as the Weston Arches and, when I was researching this walk (sometimes I do actually research things before I go on a walk believe it or not), I discovered two F.G.O. Stuart postcards of the arches.

Sadly both arches were demolished when Weston Lane was widened to accommodate increased traffic. The upper arch came down in 1931 and the lower arch was pulled down in 1948. Today no trace of either remains so all I had to go on was their position on the maps I found. All this made recreating the postcards near to impossible but, when I came to the spot where I believe the upper arch was, close to the entrance to the school turned leisure centre named after Chamberlayne, I stood on a traffic Island in the middle of the road and took a photo anyway. 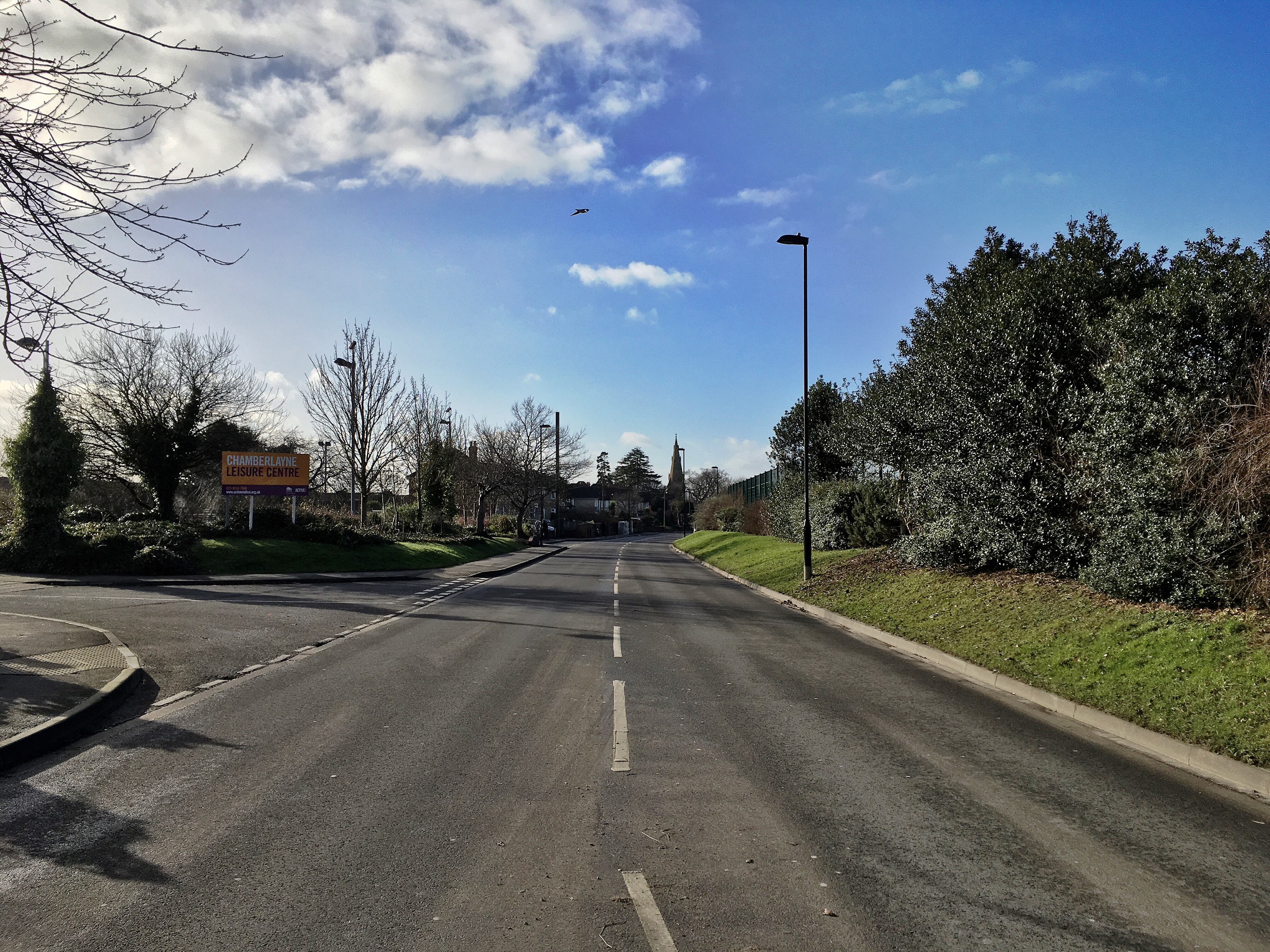 Looking at the old Postcard it’s hard to equate the modern road with the old, leafy lane. In those days though the village of Weston was nothing but a few thatched cottages scattered near the coast. There wasn’t even a church until 1865 when Thomas Chamberlayne donated the land for Holy Trinity Church to be built. Until then the Chamberlaynes had had to go all the way to Jesus Chapel on Peartree Green to worship, so the donation of the land may not have been quite as ultrusistic as it sounds. 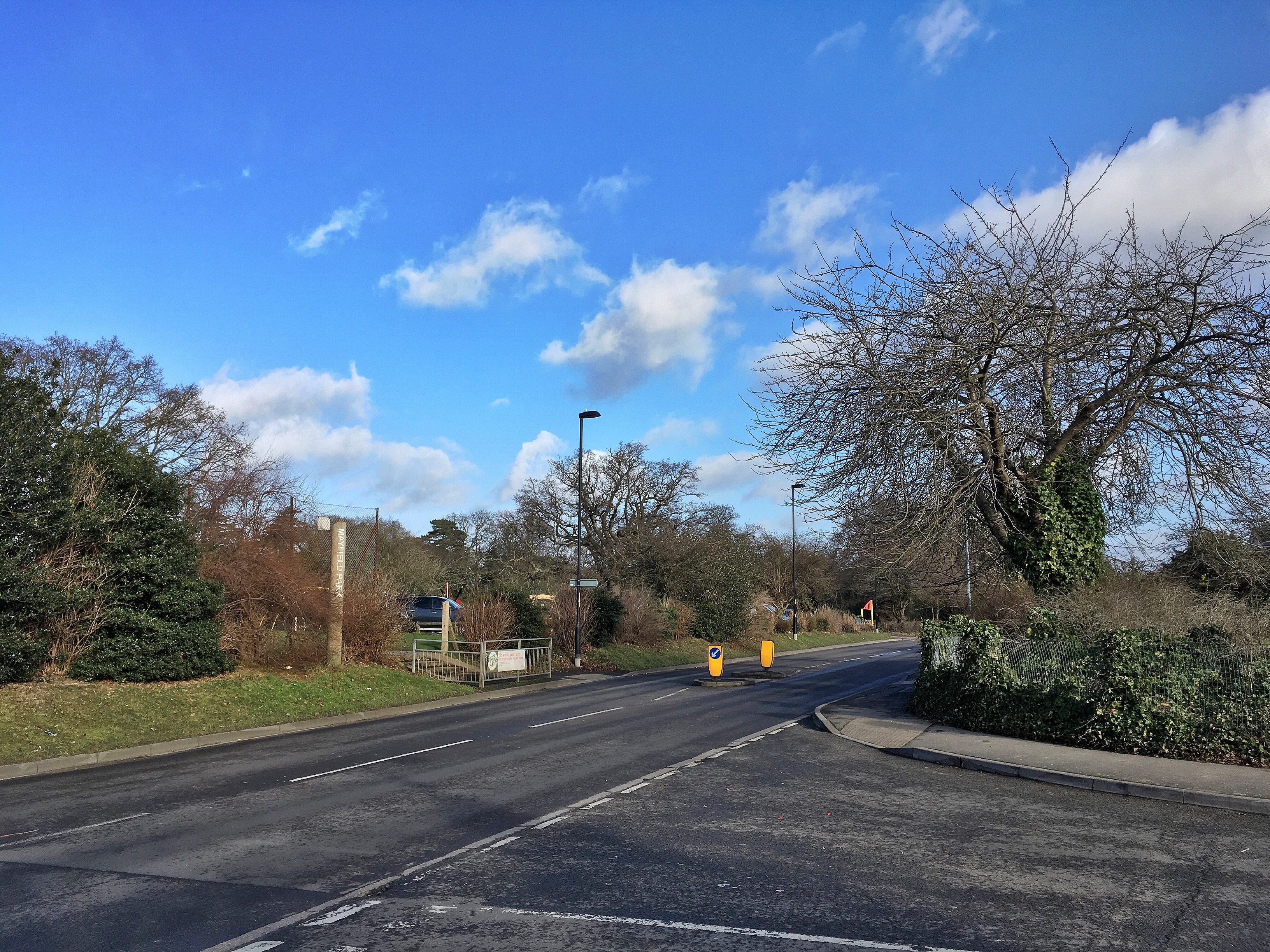 Now we’d passed the place where the upper arch once stood the church was right in front of us. Chamberlayne may have donated the land but the pretty little stone church was built by architect Alfred Bedborough entirely at the expense of the Reverend William Preston Hulton, its first vicar. The church was a replica of St Matthew’s in Landscove, Devon, designed by John Loughborough whilst Hulton was vicar of nearby Staverton. 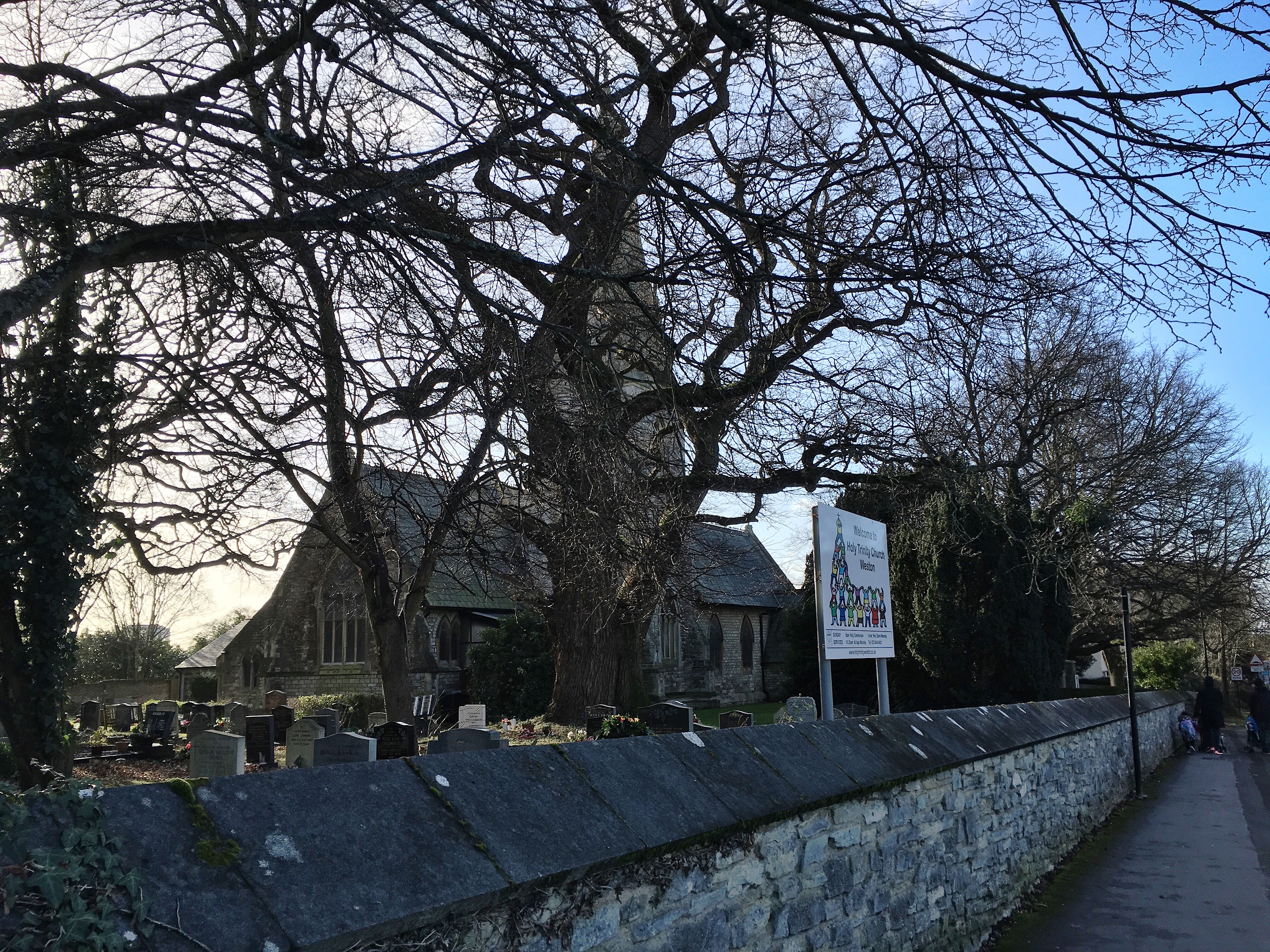 Granville Augustus William Waldegrave, the third Lord Radstock and owner of Mayfield House, was buried in the churchyard in 1913. If the church doors hadn’t been closed we might have gone inside then taken a wander in the graveyard to look for his grave. As it was those things will have to wait for another day. 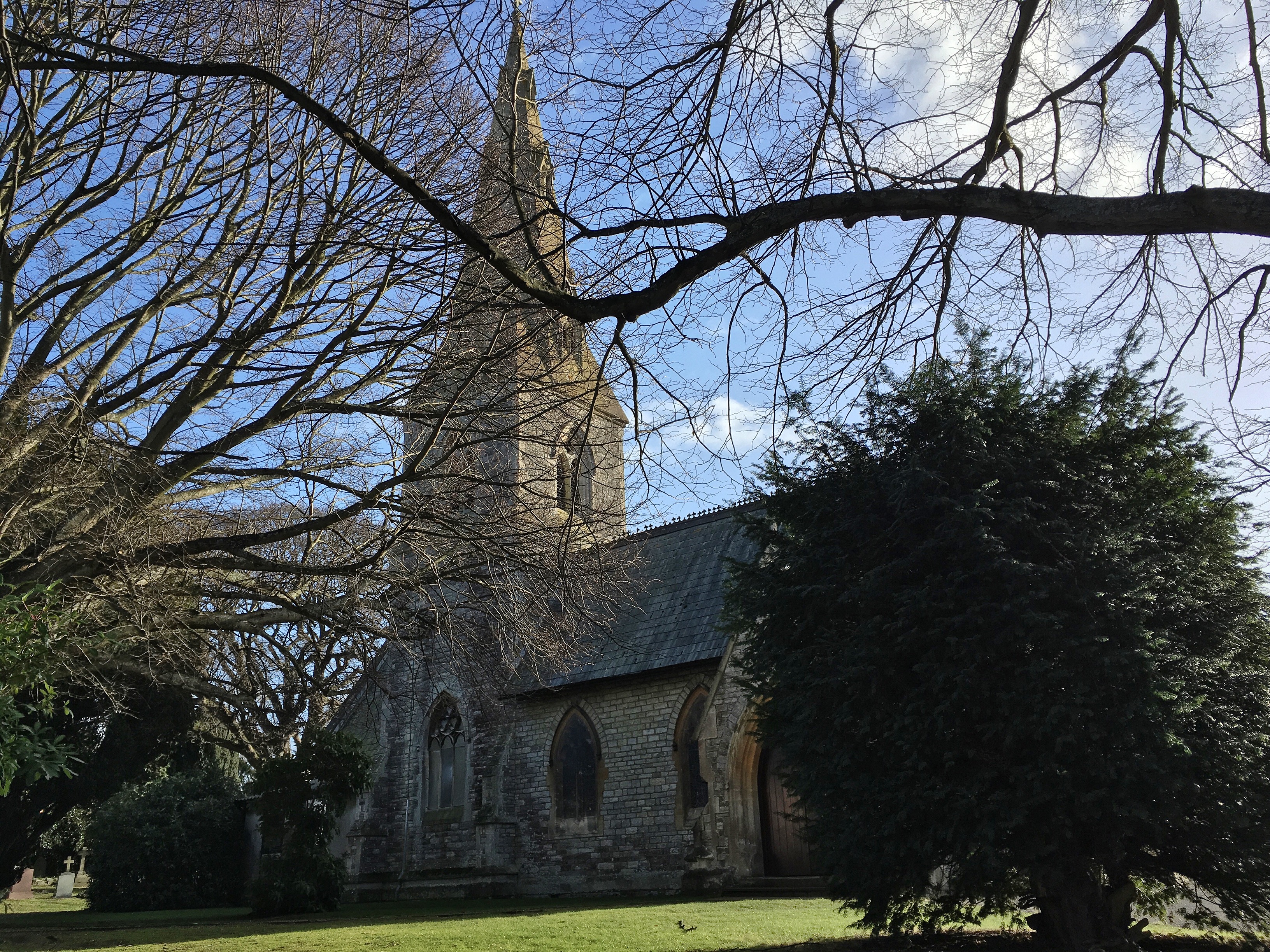 William Preston Hulton was born in 1806, in Watlington, Oxfordshire. In 1852, he inherited the Barnfield Estate, between Mayfield and Weston Grove, from his aunt. When it was split from Weston Grove and how she came by it is a mystery. The estate included Barnfield House, built for the Hulton family in the gothic style in the early 1800’s.  Once we’d passed the church we were looking right at the remains of it.

Although the beautiful gardens that once surrounded Barnfield House have been lost, the house itself is still there, almost opposite the church. Once it was a comfortable family mansion built of red brick covered with plaster. The Hulton family lived there for over a hundred years and were active in the local community. Long after Reverend  Halton’s death in 1870, Mrs Hulton invited all the women of Woolston to a party there to celebrate Queen Victoria’s Diamond Jubilee. A band played for them and each guest was given a book, Queen Victoria And Her People. In 1850, she also planted a second pear tree on Peartree Green, beside the tree that gave the area its name. When Mrs Halton died is unclear but, at some time shortly after 1920, when Weston officially became part of Southampton, Barnfield House was converted into flats. The grand house has been much altered and is barely recognisable. It is now called Barnfield Court or Barnfield Flats. As we passed I did my best to take photographs of it. 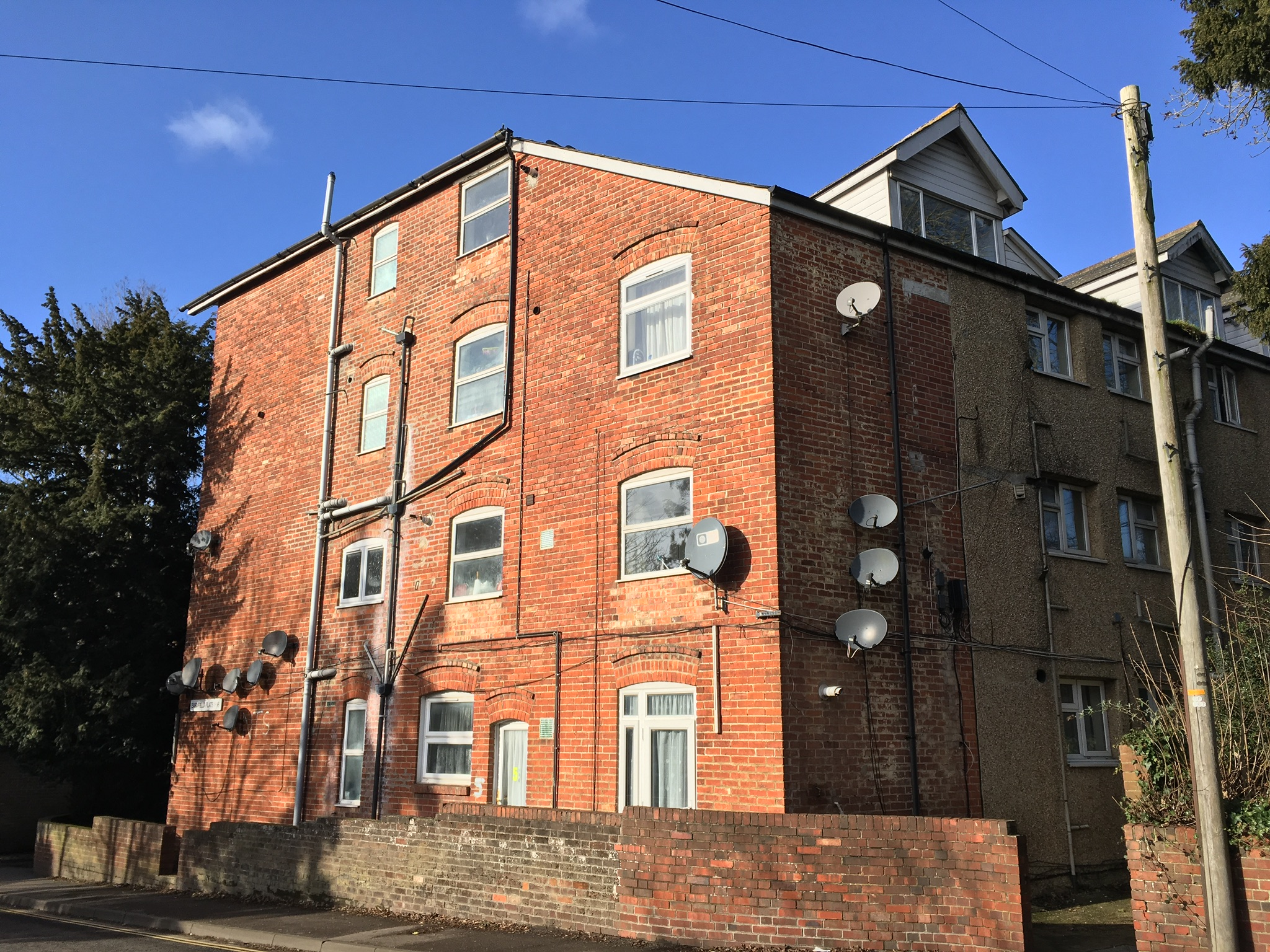 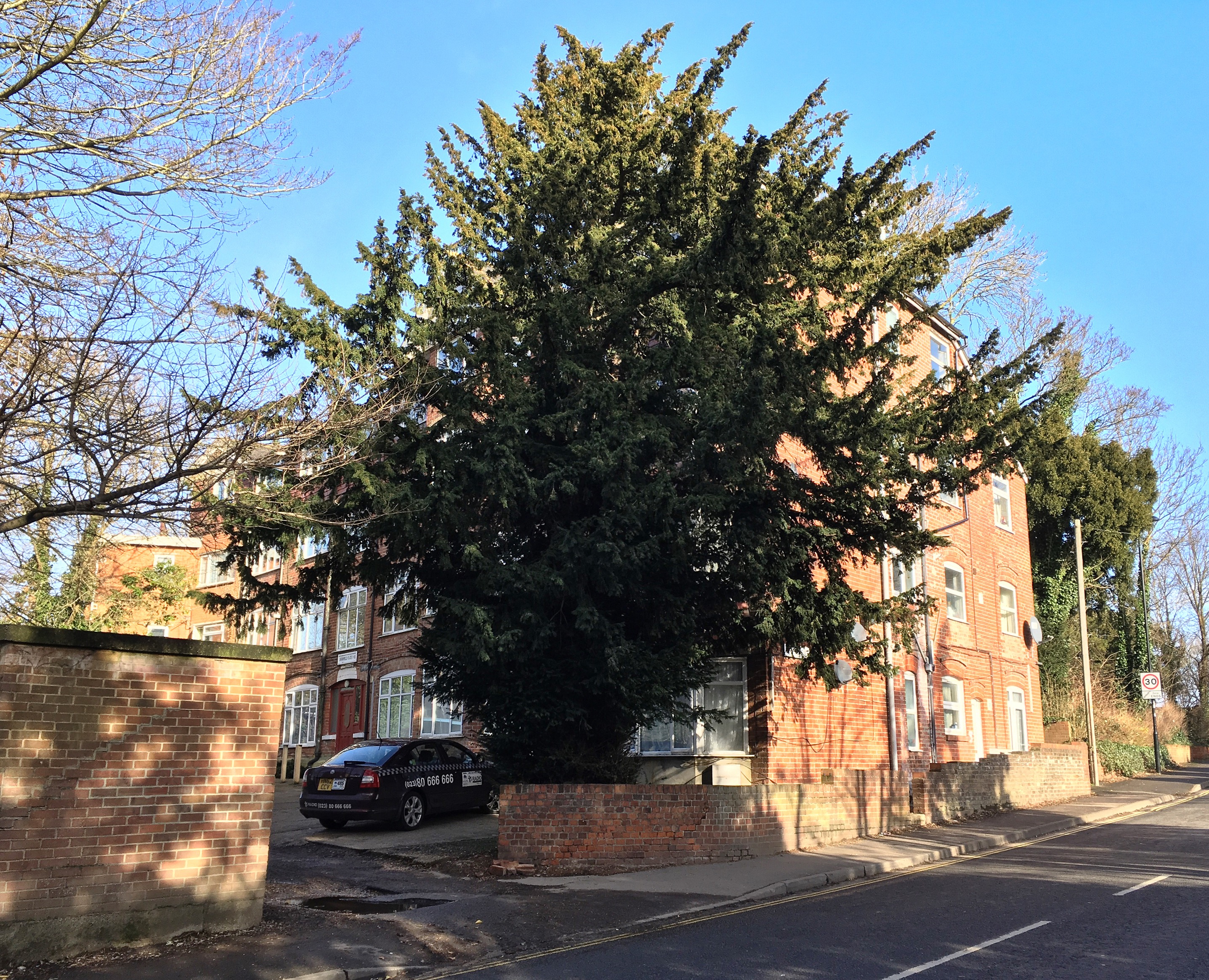 The people who live in Barnfield Court today are probably unaware they are living in the remains of one of Weston’s lost estate houses. By 1948 the lovely gardens surrounding Barnfield House had become a victim of the post war need for new housing. The modern day Barnfield Estate is a small council estate, built by apprentices but the road names are a reminder of its previous life. 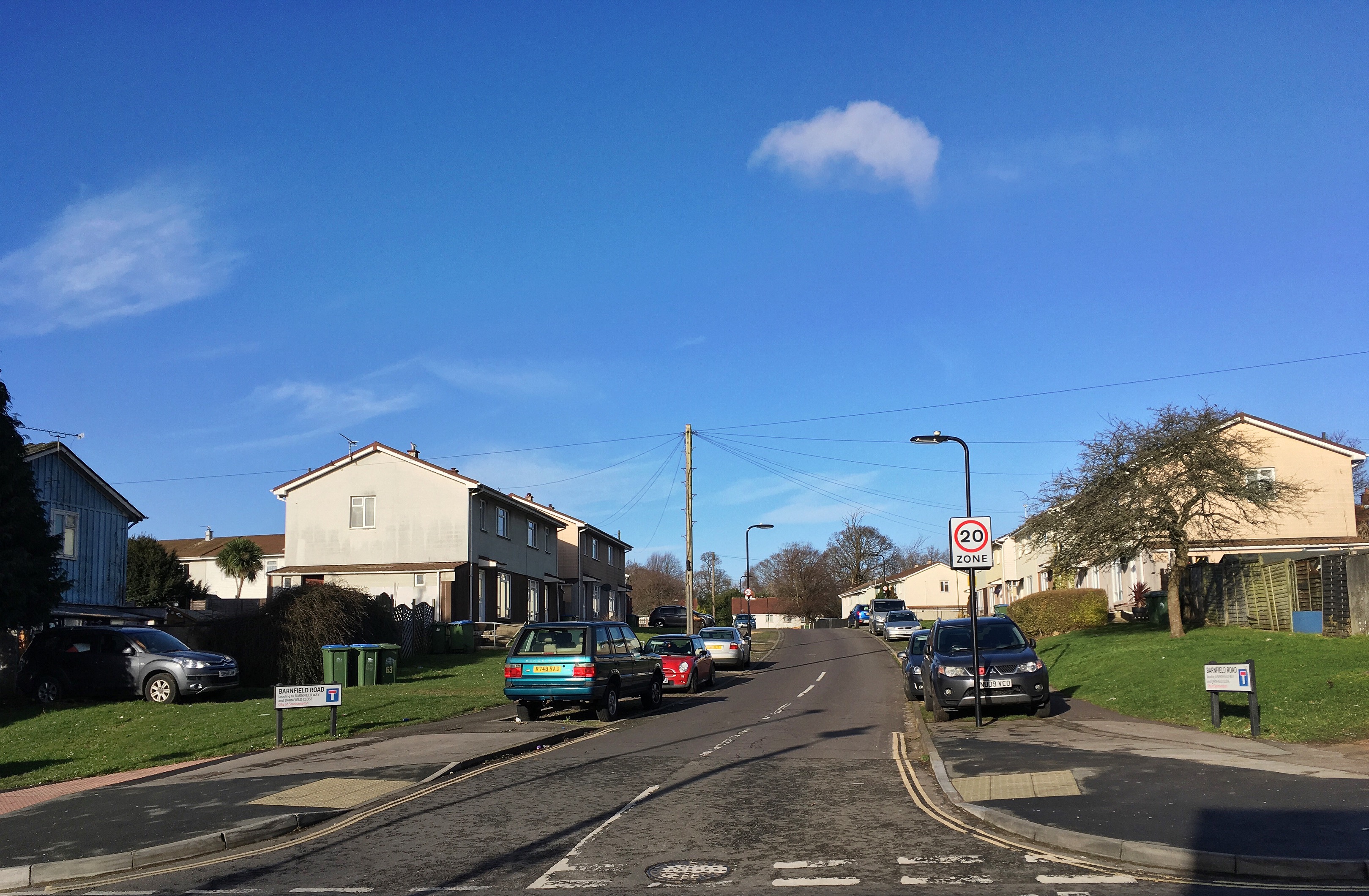 This was an area I knew well from my childhood. My nephews and I would often walk through the Barnfield Estate and use the cutway between the houses to get to Mayfield Park. Nothing much seems to have changed there since then but the same can’t be said for the parade of shops where we bought our sweets and comics. The shops and the flats above them have disappeared, replaced by fancy new ones that seem to have sprung up overnight. 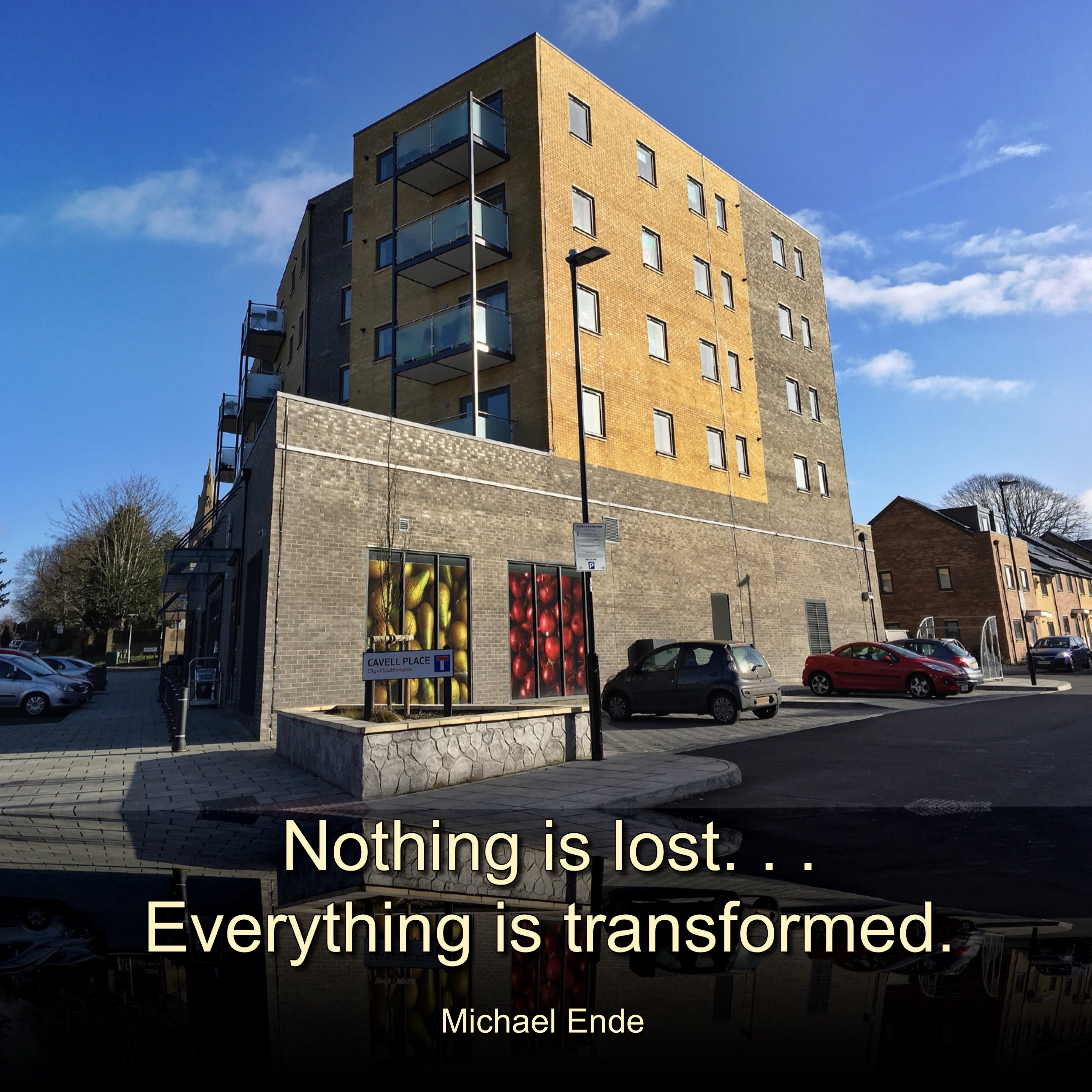 There used to be a funny little library on the slope leading to Barnfield Close. That too has gone, replaced by new houses. Now the library is across the road in the new shopping complex. At least the people of Weston still have somewhere to read. 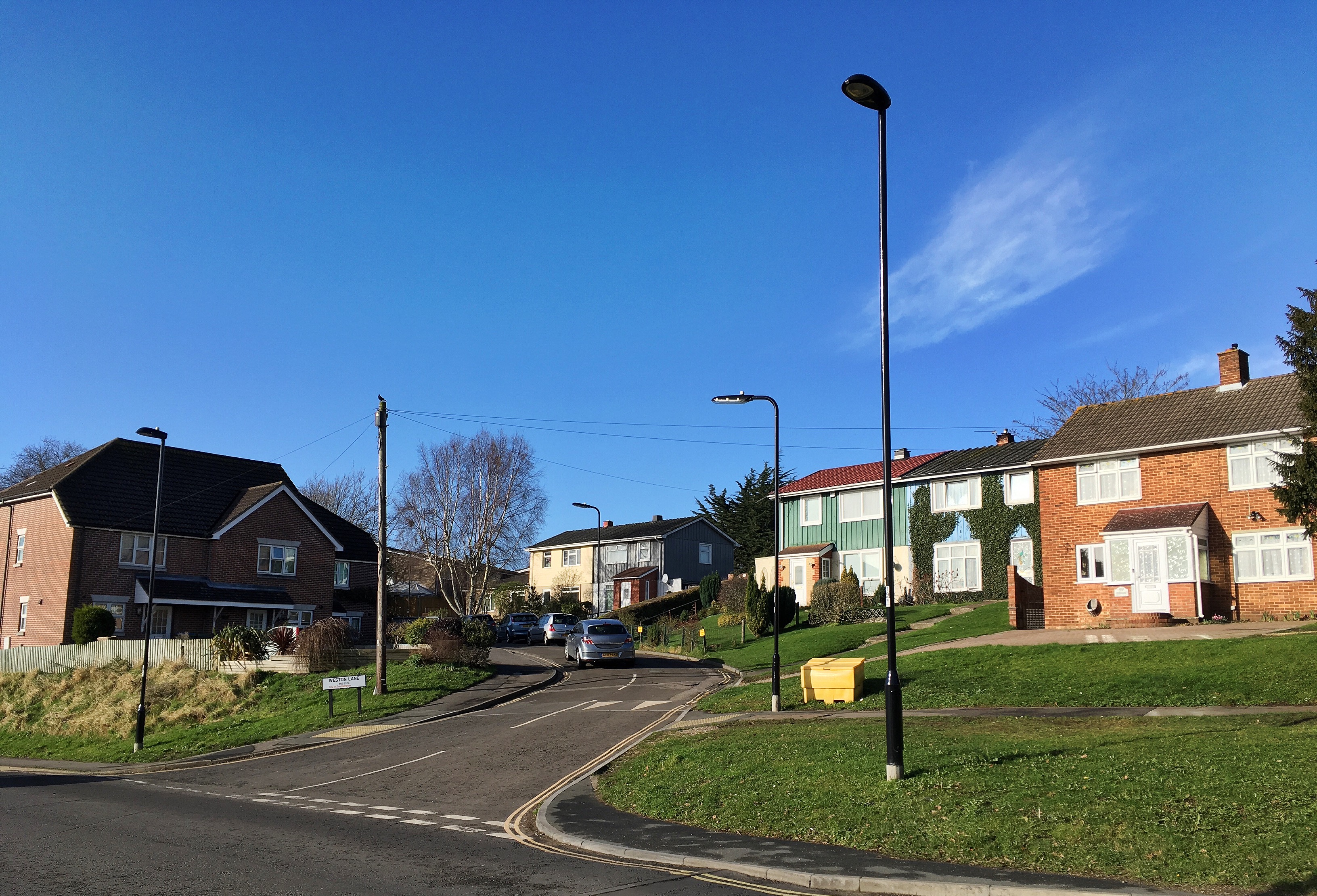 The lower Weston Arch was close to the Sun public house, which can be seen in Stuart’s Postcard. This should have made the spot easy to find but the pub, like so many, is nothing but a memory now. Using what little memory I have, I tried my best to find the right spot to recreate the postcard. As so little remains from those far off days it’s hard to say how successful I was. 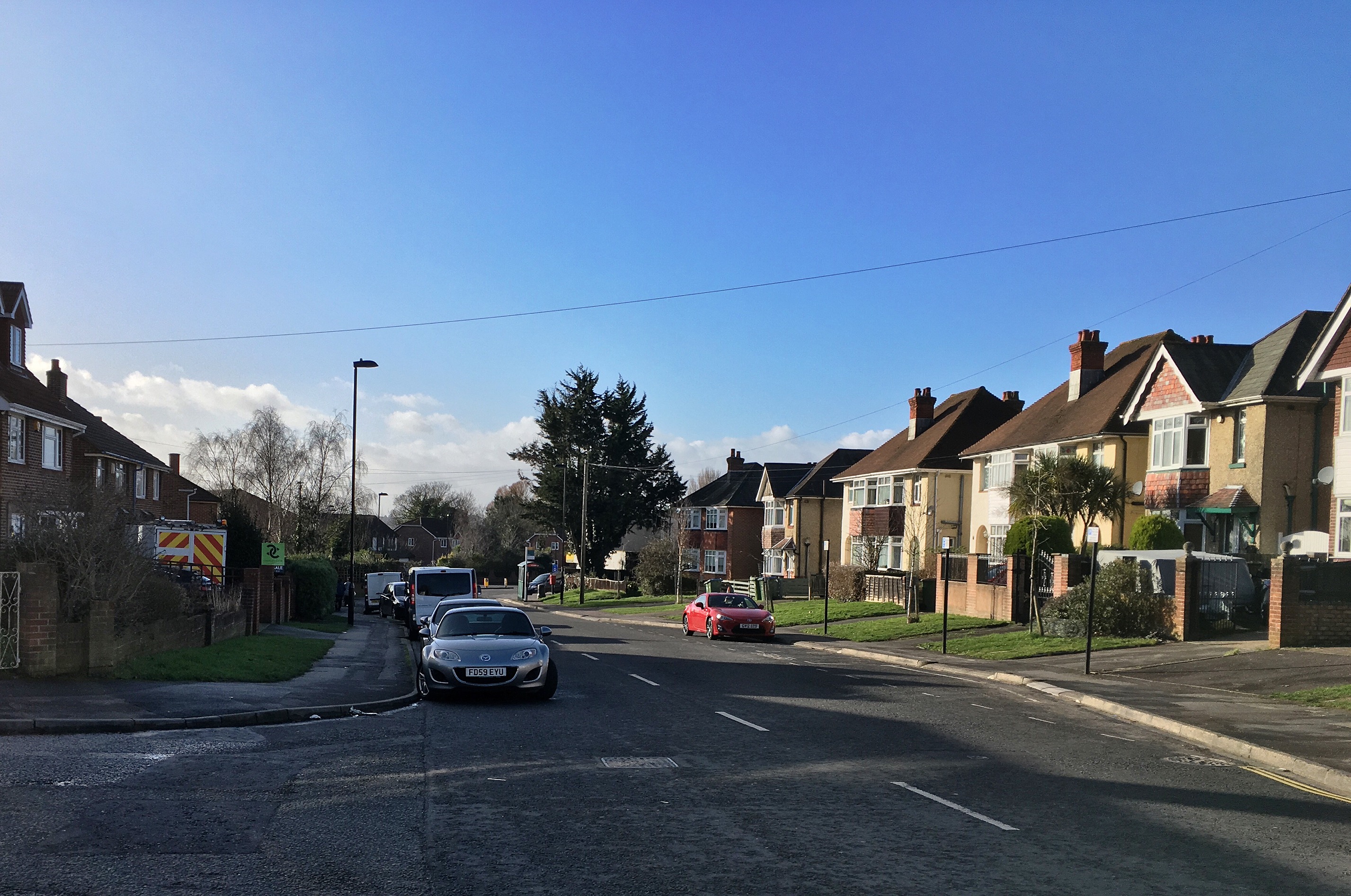 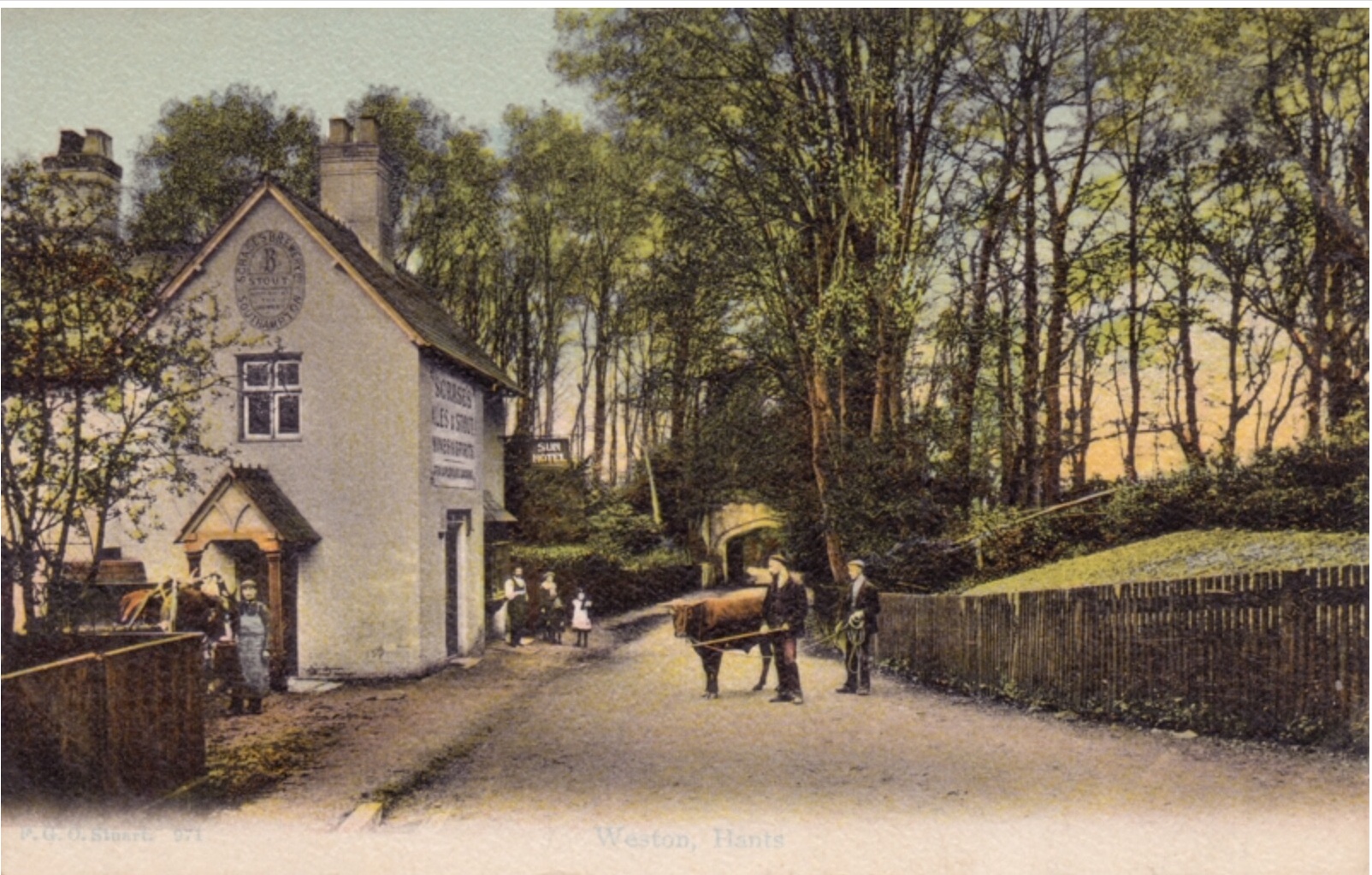 With two of the four postcards I’d found ticked off my list and two of the three lost estates explored, it was time to head for the shore and wrap up my tour of Weston with Weston Grove.

8 thoughts on “The lost estates of Weston, Barnfield”