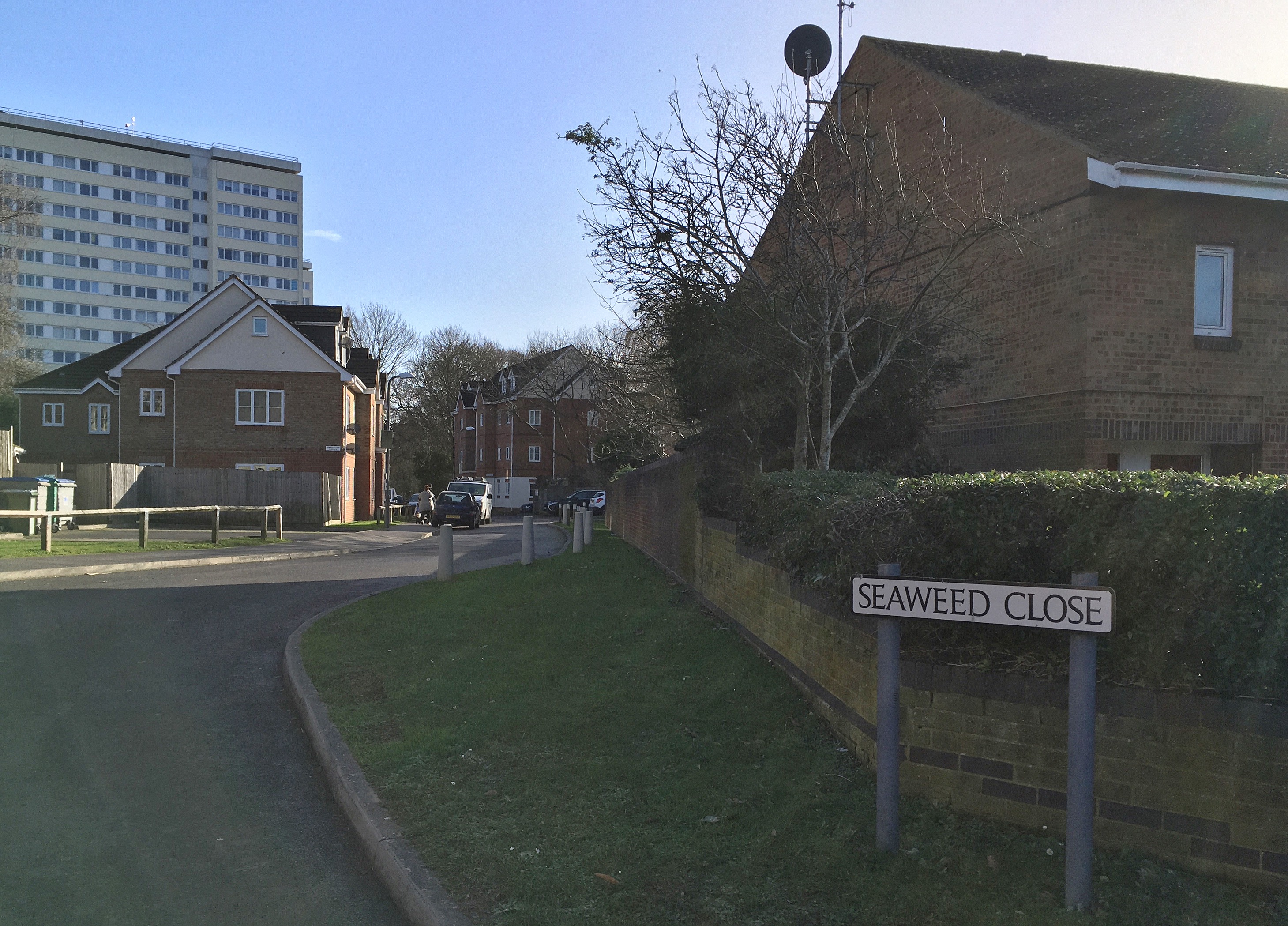 We’d walked from the top of Weston Lane to the bottom and the closer we got to the shore the more the wind buffeted us. We were now walking on what would once have been part of the Weston Grove Estate. Of course, the whole of Weston once belonged to the Chamberlayne family. The exact history is unclear but in 1424, Alice, the wife of Ralph Chamberlayne, inherited an estate on the east bank of the River Itchen. By the late 1700’s all the land between Itchen Ferry and Hamble belonged to William Chamberlayne, in part inherited from his father’s friend and client, Thomas Dummer.Things have changed beyond recognition since the Chamberlayne family owned this land. What was once the domain of one family is now home to thousands of people and the word Estate has a whole different meaning.

Even in my lifetime there have been many changes. In the 1970’s and 80’s there used to be a pub at the bottom corner of the lane called the Seaweed Inn. It was named for the Seaweed hut that once stood on the foreshore, although it was not really near the spot. Being built in the late 60’s or early 70’s and and overshadowed by the tall flats of International Way, it was never a pretty pub. Mother went in there once or twice I seem to remember and I visited it once when I was in my late teens. The name seemed so romantic that the reality was a little disappointing, at least to me. The one thing I remember about it were the toilets, with signs saying Sheweed and Heweed. The pub is long gone now and all that remains is a road name as a reminder.

The sky may have been a beautiful shade of blue but blue skies in January generally mean cold. Stopping was not really an option. The wind more or less blew us ast the spot where the pub once stood and along the footpath behind the tall flats. The cold of it seemed to eat into our bones. 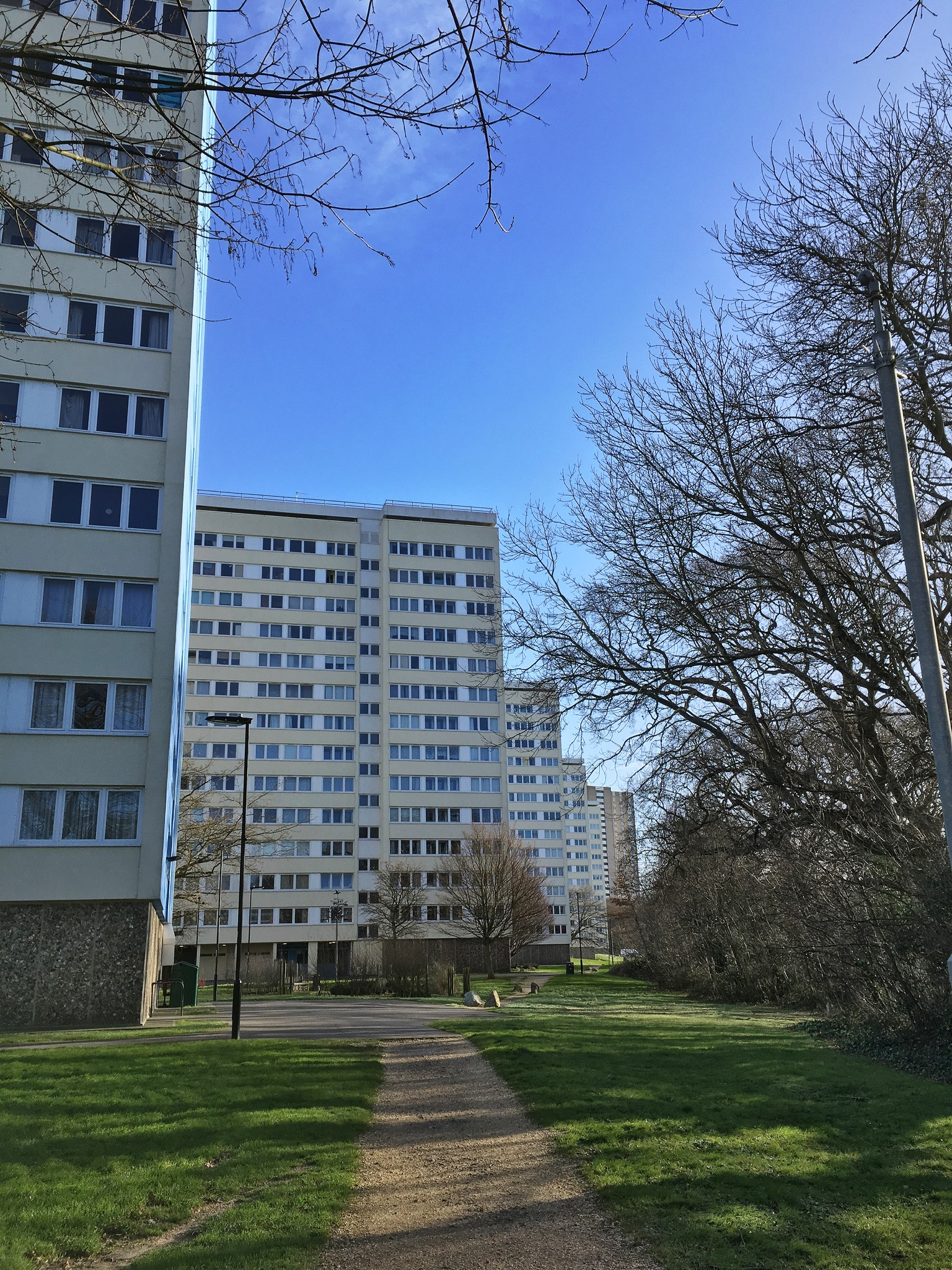 There are six tower blocks on International Way, looking out over Weston Shore. They were built in the 1960’s to cope with the post war baby boom. Five of the blocks, Havre Tower, Rotterdam Tower, Copenhagen Tower, Oslo Tower, and Hampton Tower, were painted in shades of sky blue a few years back but the sixth and tallest block, Canberra Towers, was left out and stands, slightly apart from the rest, looking neglected and, to me, a little sad. High rise living is not for me but the views over Southampton Water must be some of the best in the city. 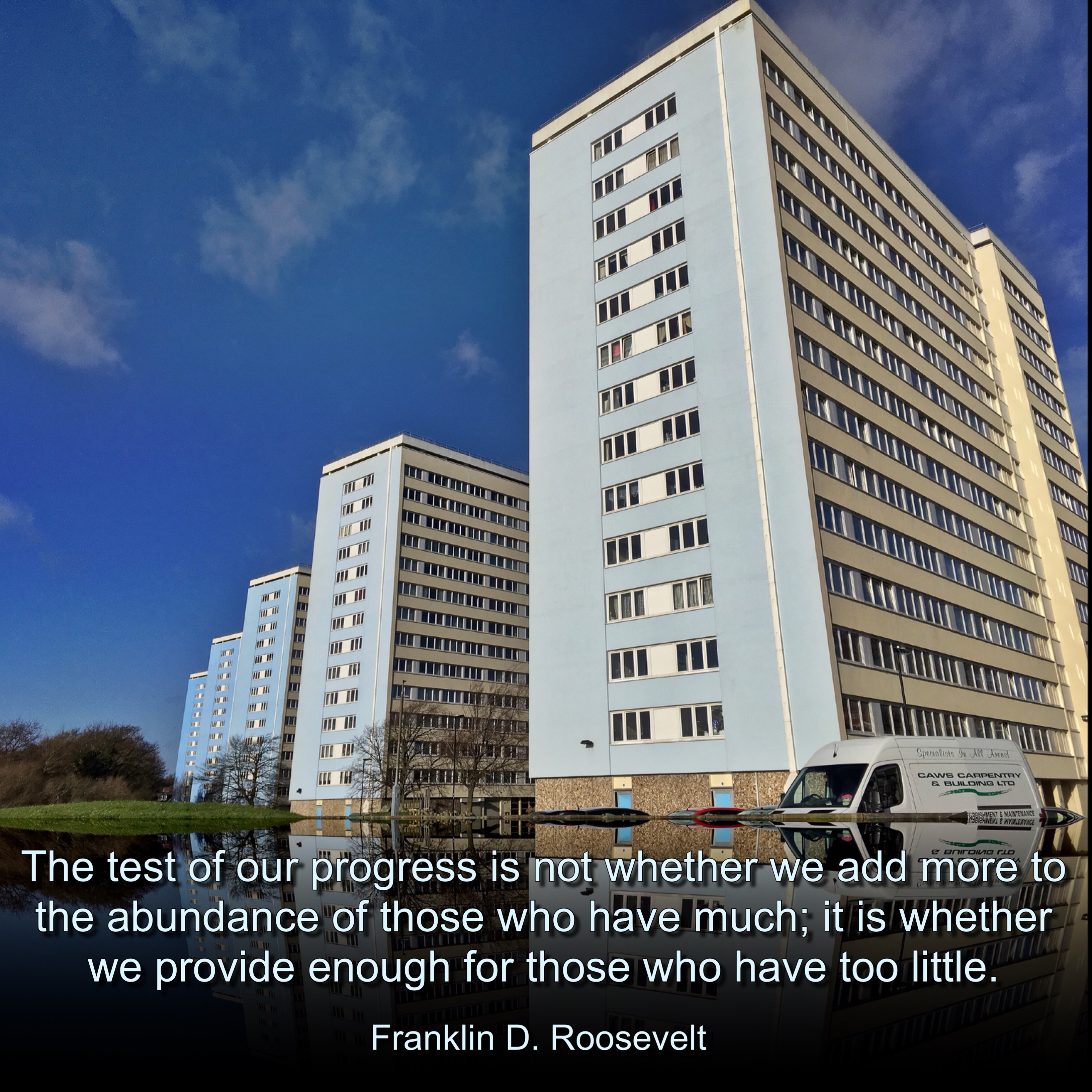 There was no respite from the icy wind as we left the flats behind and headed along the path towards the shore. Now we could see the sea for the first time and the spires of Fawley in the distance but staying upright was a hard task. The wind plucked and pushed us from above and the mud below our feet was slippery. We picked our way as best we could and were thankful to make it to the road without falling. 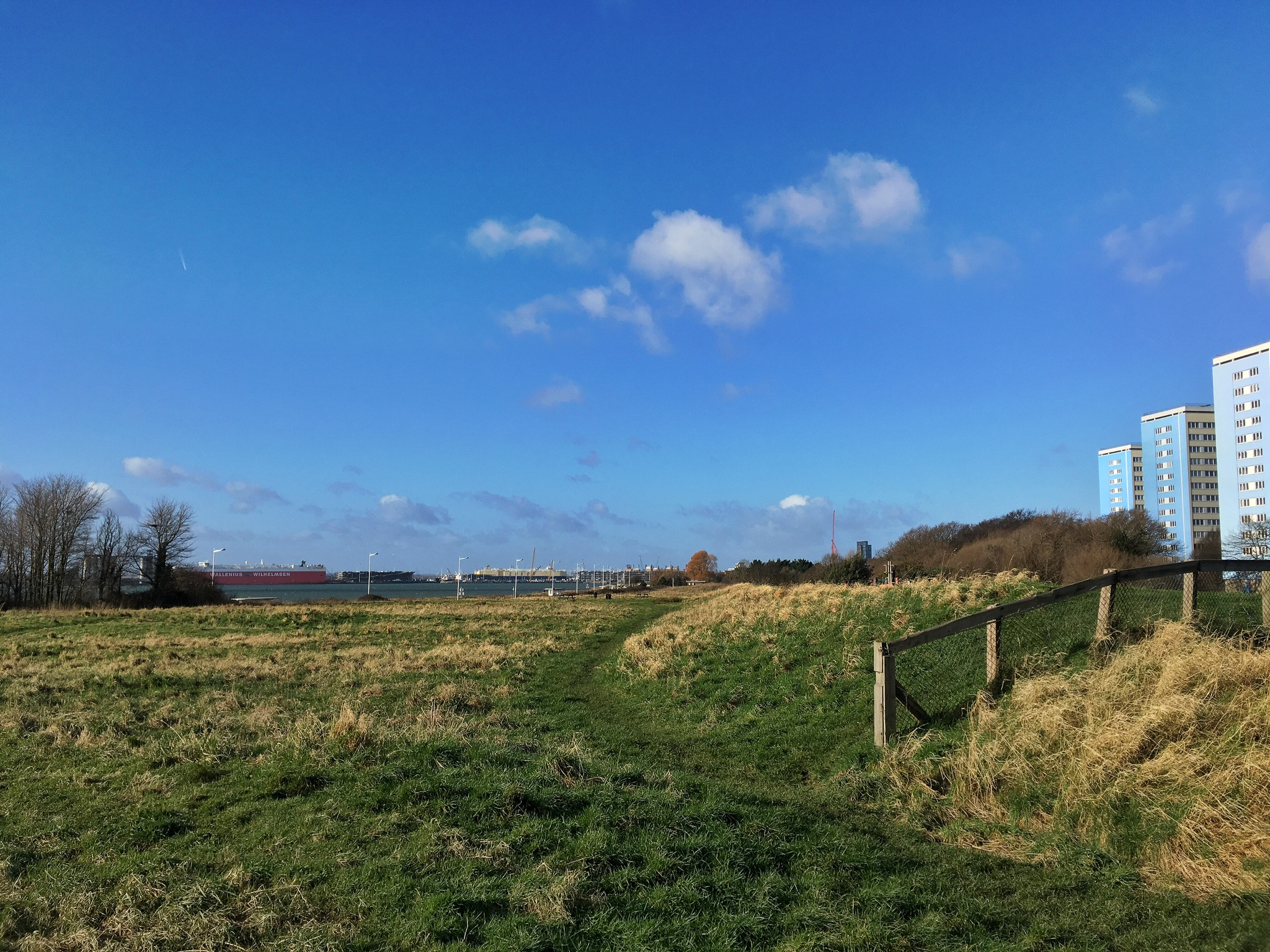 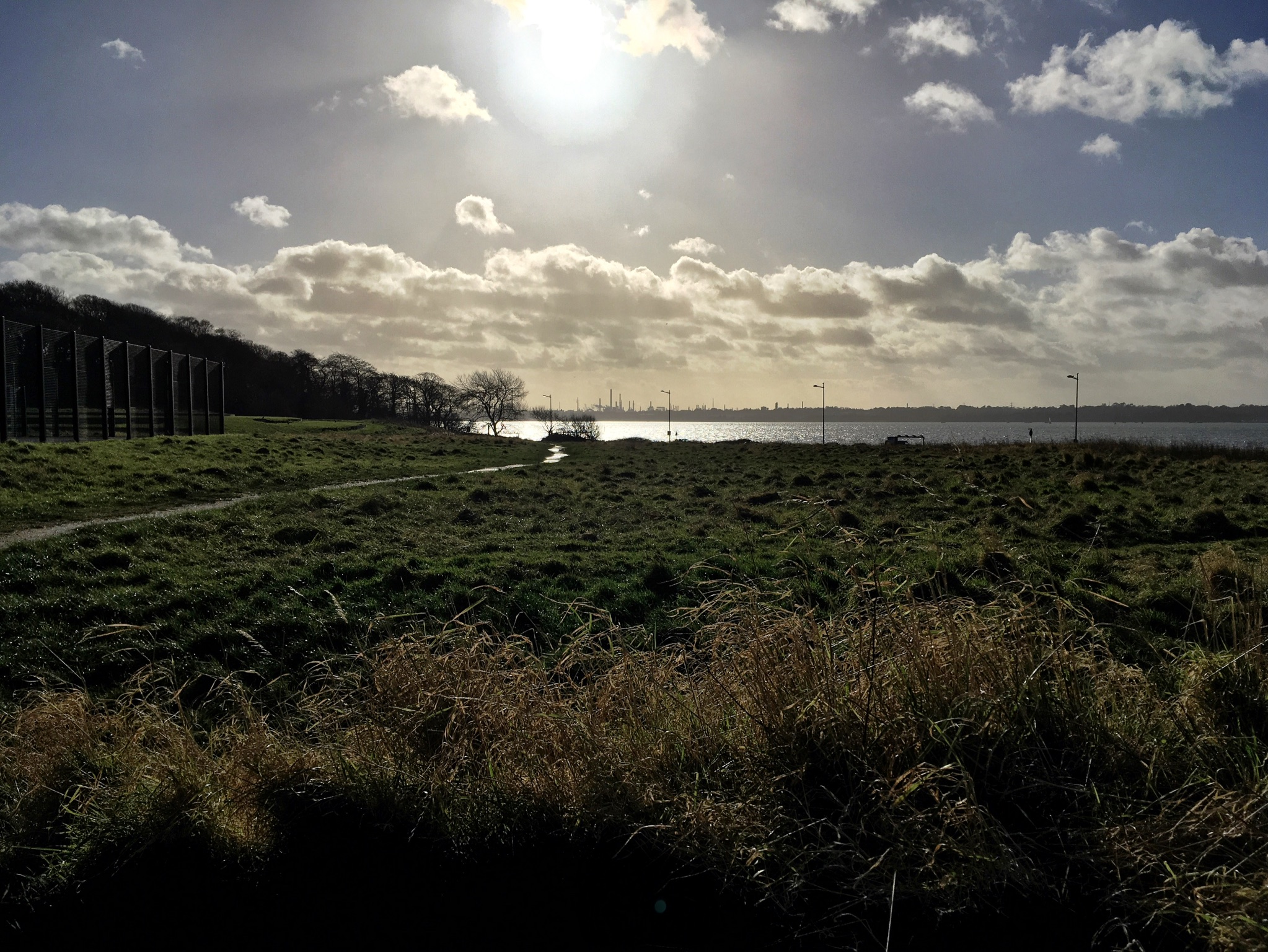 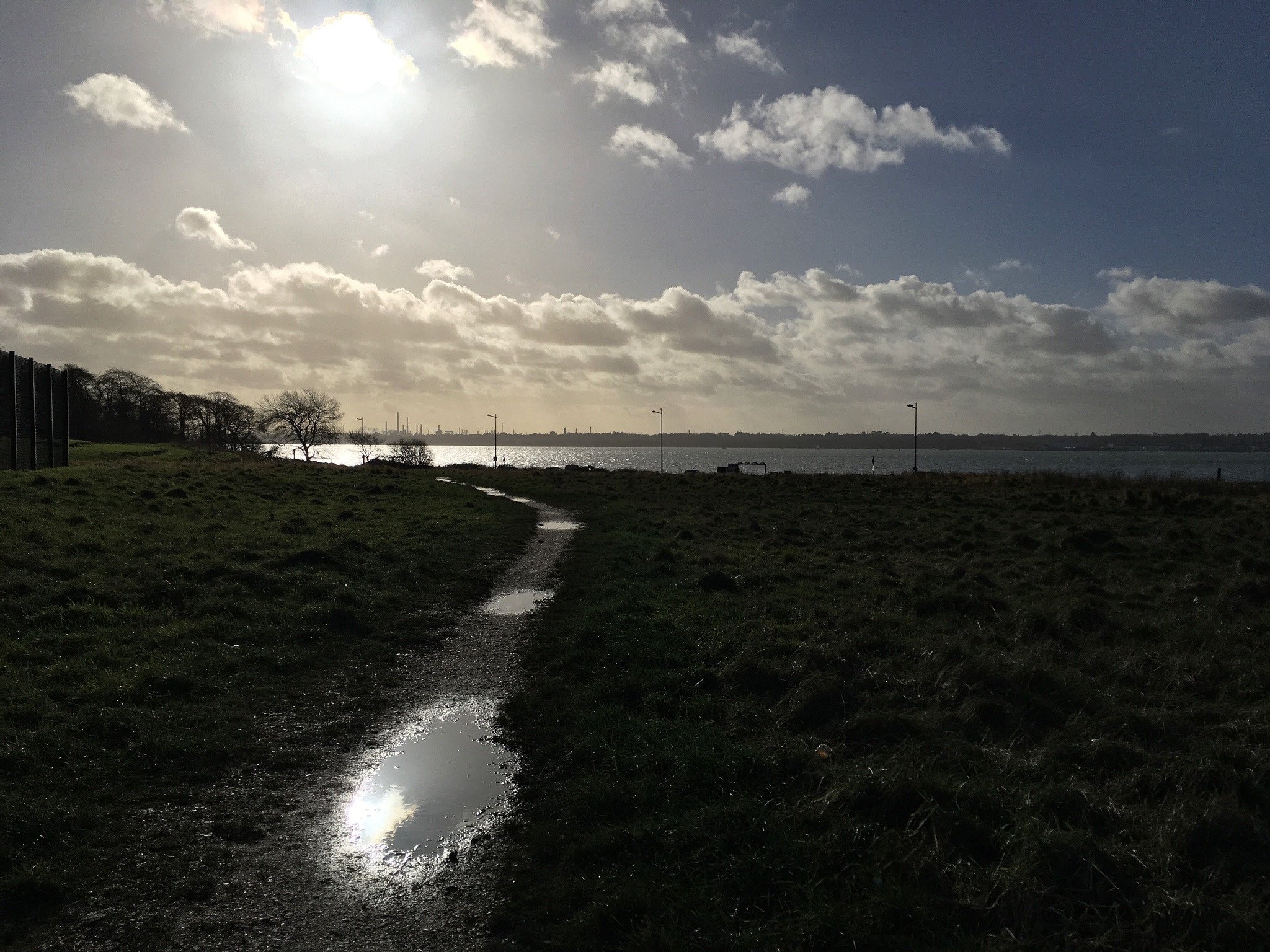 Once we got to the car park we both agreed a reward was in order. It may have been a little chilly for ice cream but it was all that was on offer and we were hungry after a long, cold walk. At first we sat on my favourite bench to eat but the wind was so vicious we abandoned that plan and walked a little further to a bench with some meagre shelter. Even then it was an uncomfortable rest. As we ate we talked vaguely about walking to Netley Abbey, Hamble and the boundary of the old Chamberlayne Estate. The cold was the deciding factor. Our hands and faces were numb and knowing the Abbey would be closed and we’d only be able to peer through the gate made it all seem pointless anyway. 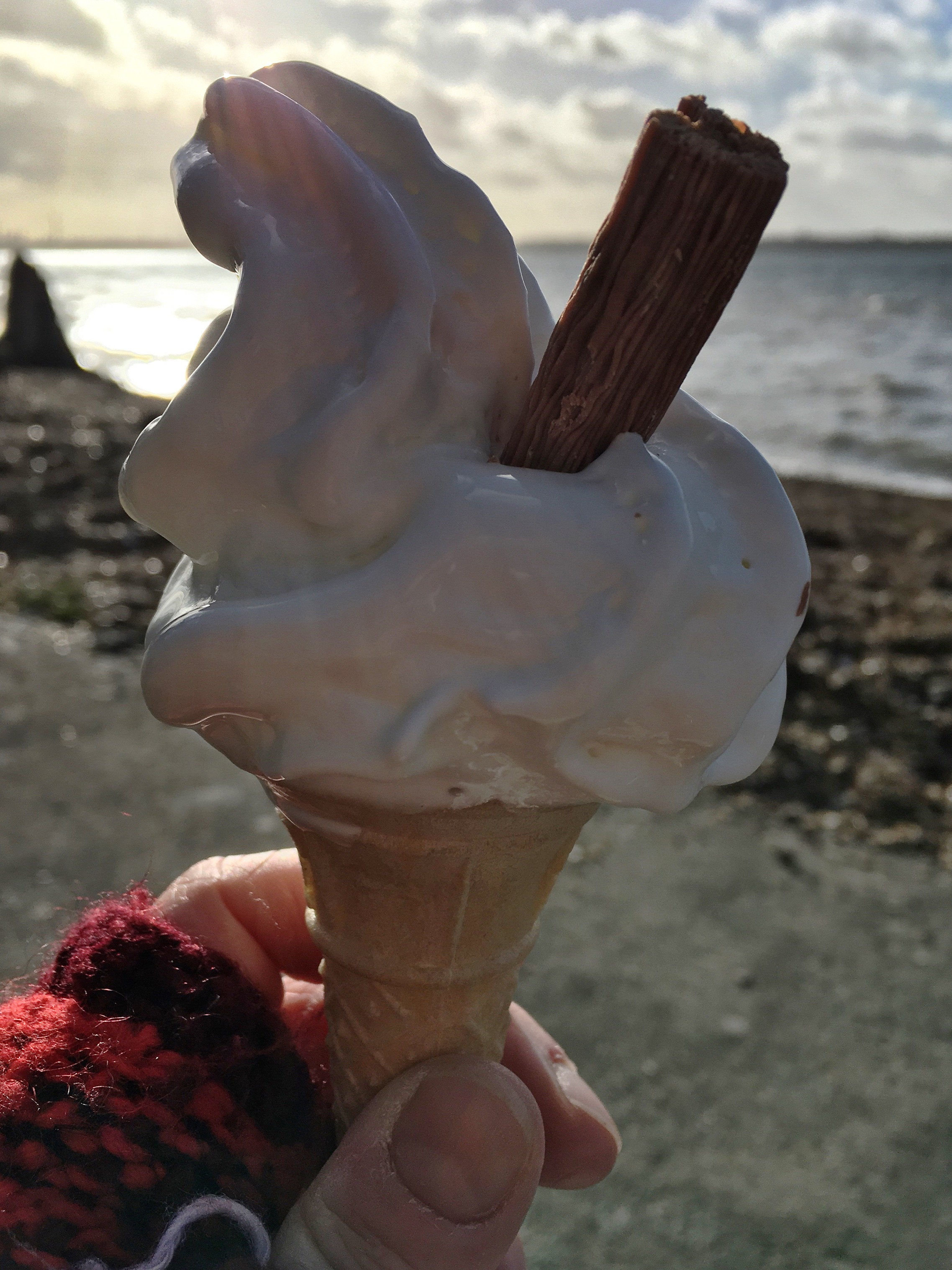 With our ice creams devoured we began the long treck along the shore towards home. Once we’d passed the fallen tree we were on the open shore. This was when the wisdom of beginning our walk at the top of Weston Lane came into question. Now the wind was blowing in our faces and battling against it was energy sapping. It took our breath away and made every step an effort.
“We should have walked the other way,” CJ grumbled. He certainly had a point but it wasn’t very helpful at this stage. 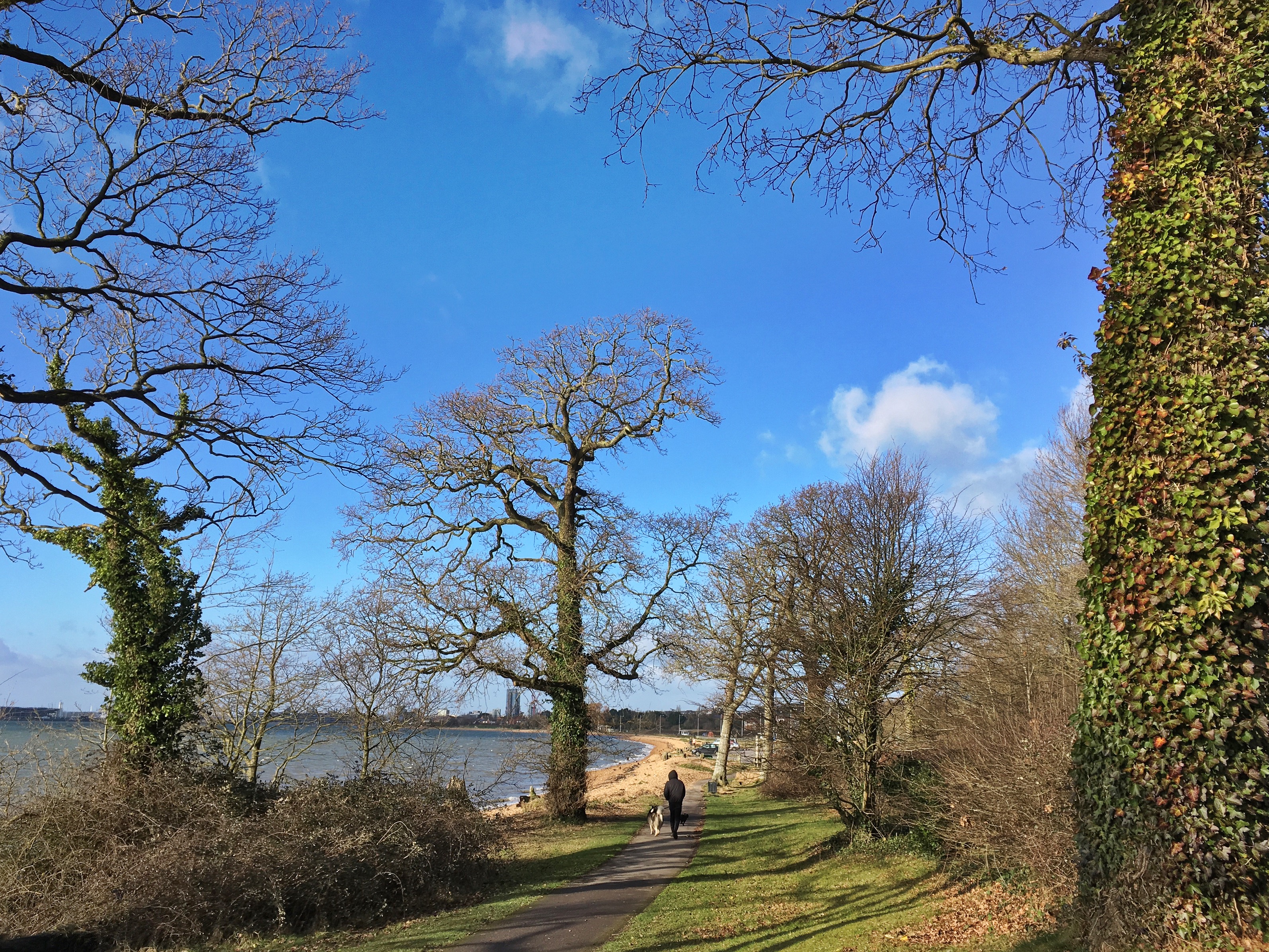 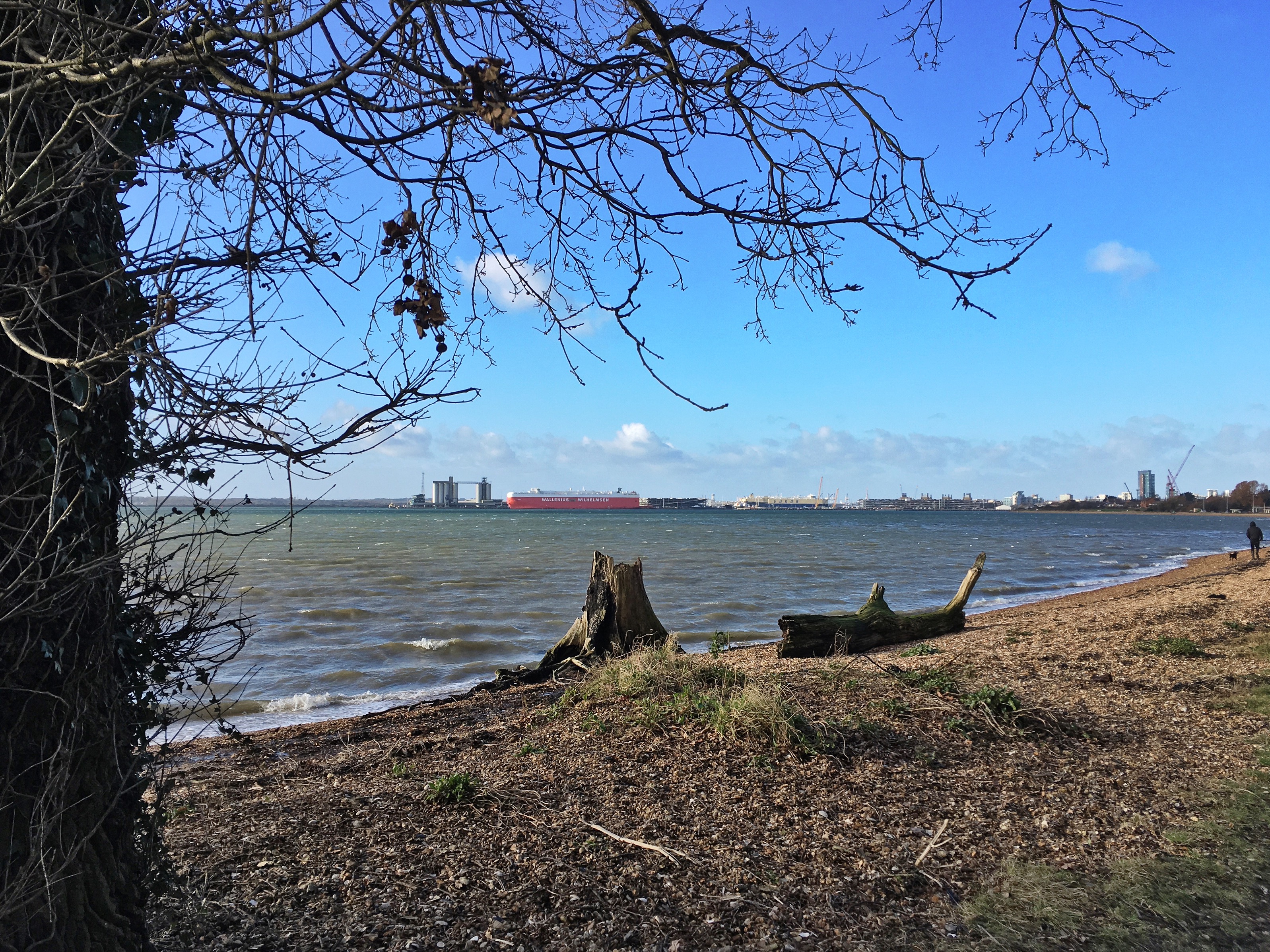 In the shadow of the flats the litter picking hero was at work. A little way along the shore we came across his strange litter collecting contraption. He does a sterling job of keeping the shore clean but I can’t help thinking it would be nicer if people just took their litter home with them or put it in one of the bins along the promenade. 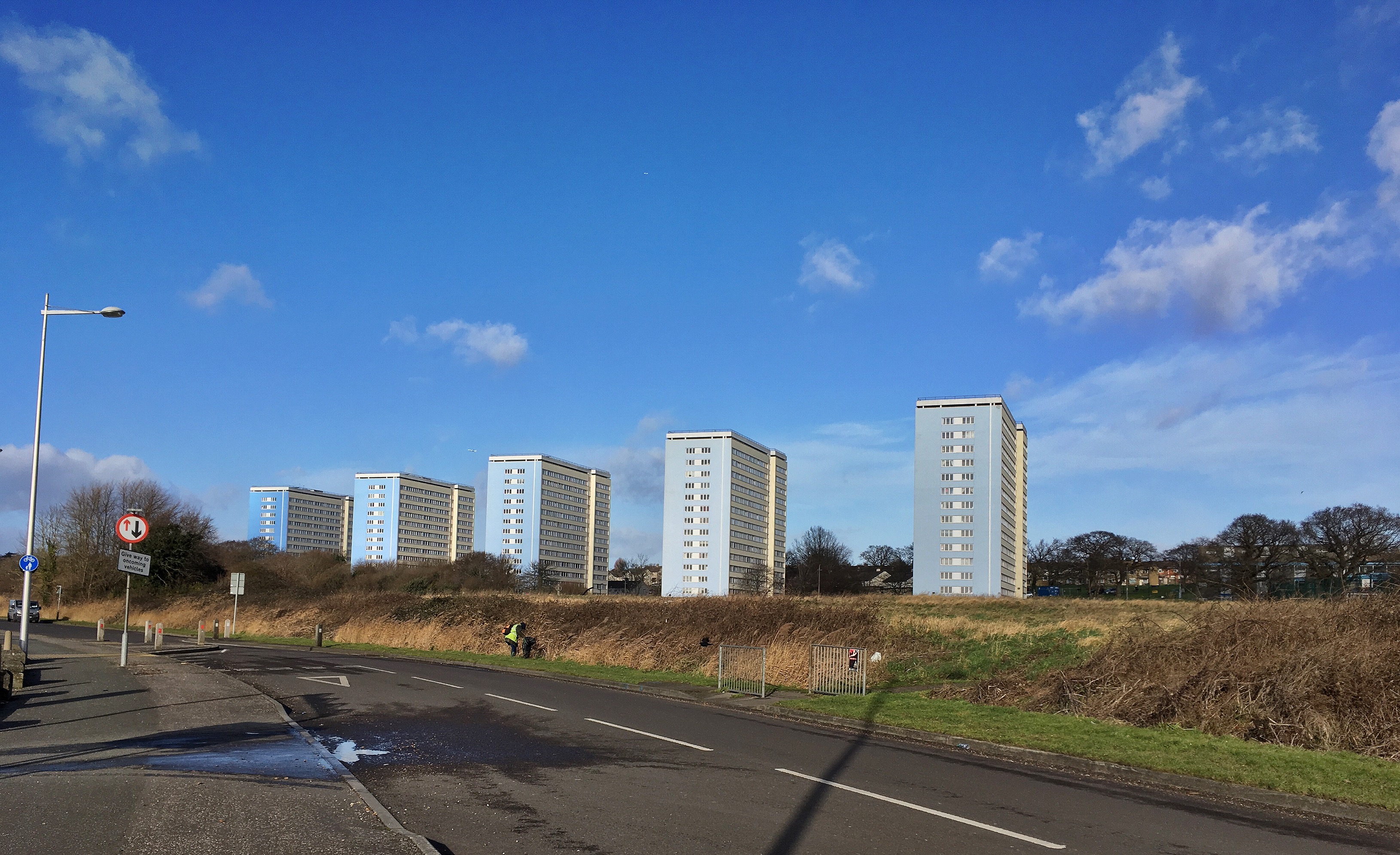 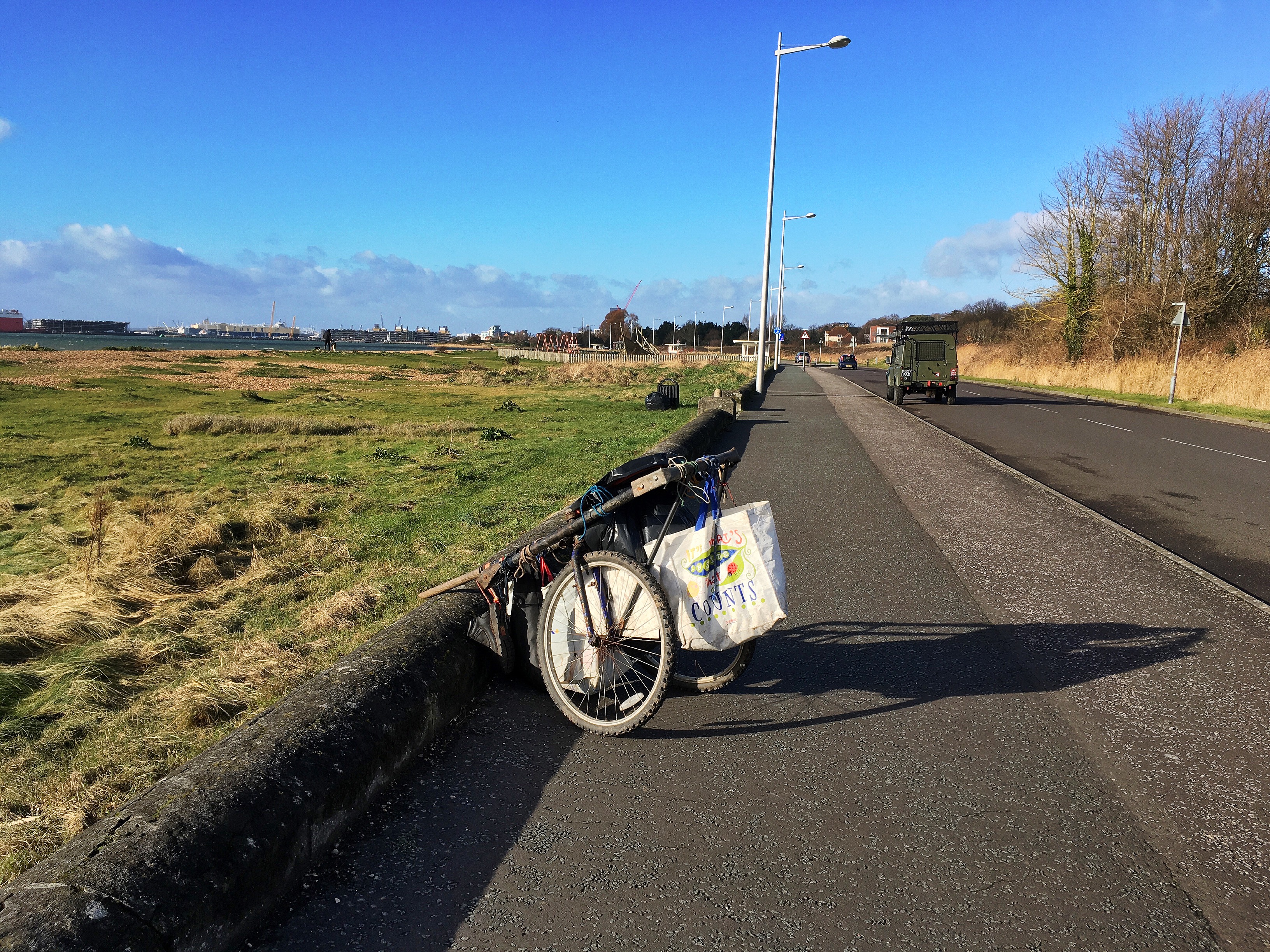 In Victorian times visiting the seaside became fashionable. It was thought that sea air and sea bathing were good for health and many areas of British shore line were developed into seaside resorts with promenades, piers, pleasure palaces, Punch and Judy and donkey rides. Weston never quite went that far but, in the 1930’s, there was some half hearted attempt at development. A promenade of sorts was created and some beautiful Art Deco beach shelters were erected. Both remain to this day, the former as a pavement with a low and slightly crumbling wall I remember walking along as a child. Despite restoration, the beach shelters have seen better days. Sadly, the vandals can’t seem to leave them alone and the plexiglass that was added has mostly gone. Even if they no longer provide any kind of shelter from the biting wind, I love the shape of them. 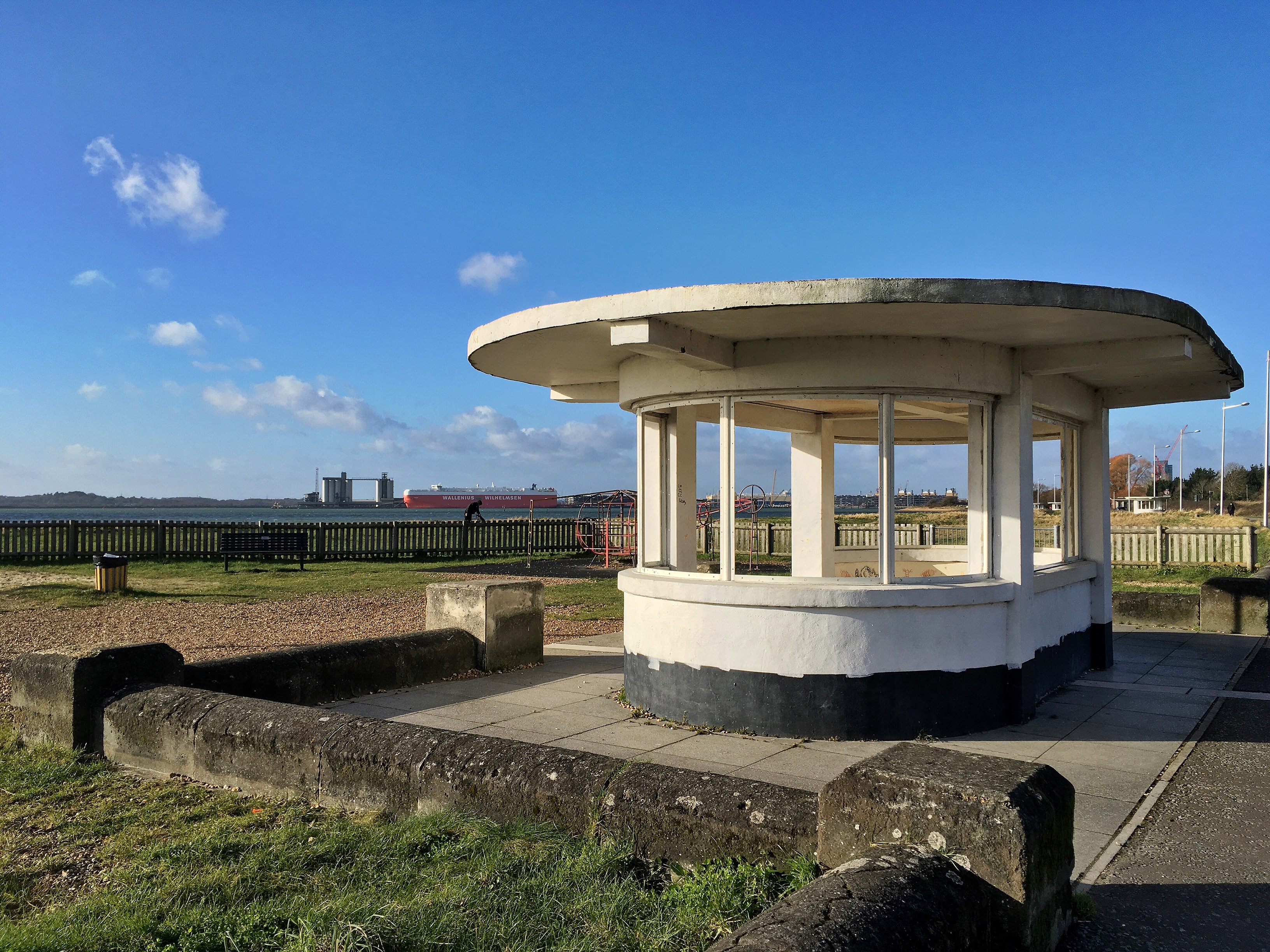 As we struggled against the wind I noticed a young woman on the beach with a litter picker and a bag. Whether she was working alone or helping the litter picking hero was unclear but it was good to see the beach being cleaned nonetheless. 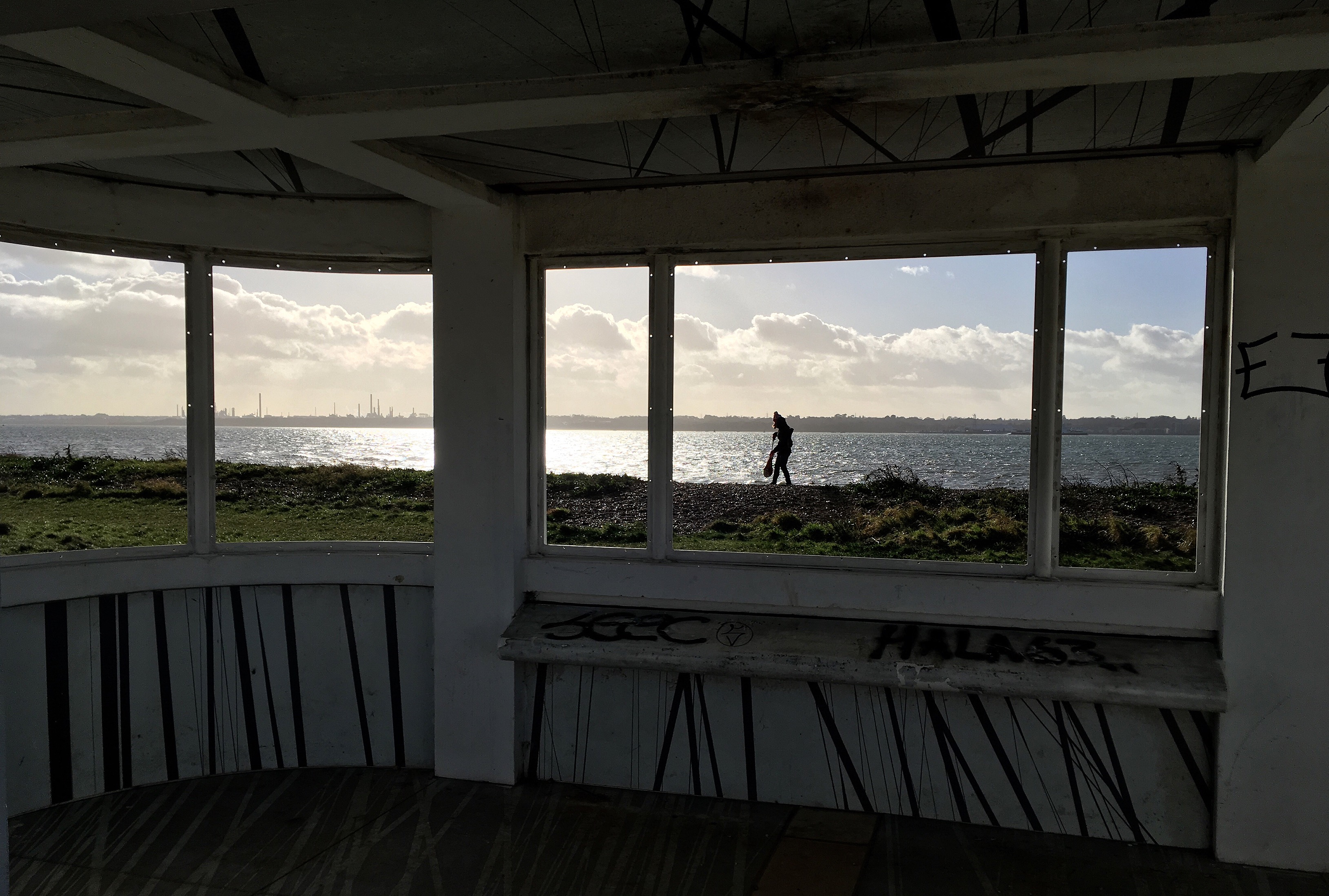 Although this land belonged to the Chamberlaynes, there was a small fishing community living near the shore and little fishing boats going in and out with the tides. On the foreshore, near the end of Weston Lane there used to be a hut used to store fishermen’s equipment and provide shelter. It was a makeshift thing, constructed of driftwood with a roof made of seaweed. Exactly when it was built is a mystery but it is shown on maps from the late 1700’s and remained until 1967, when it was finally demolished. Although I must have seen it as a child, I don’t really remember it at all but F.G.O. Stuart featured it in two of his postcards. When we reached the spot where it used to be, at least as far as I could tell, we stopped to take a photo. As recreations go, it wasn’t my best effort but at least I tried. 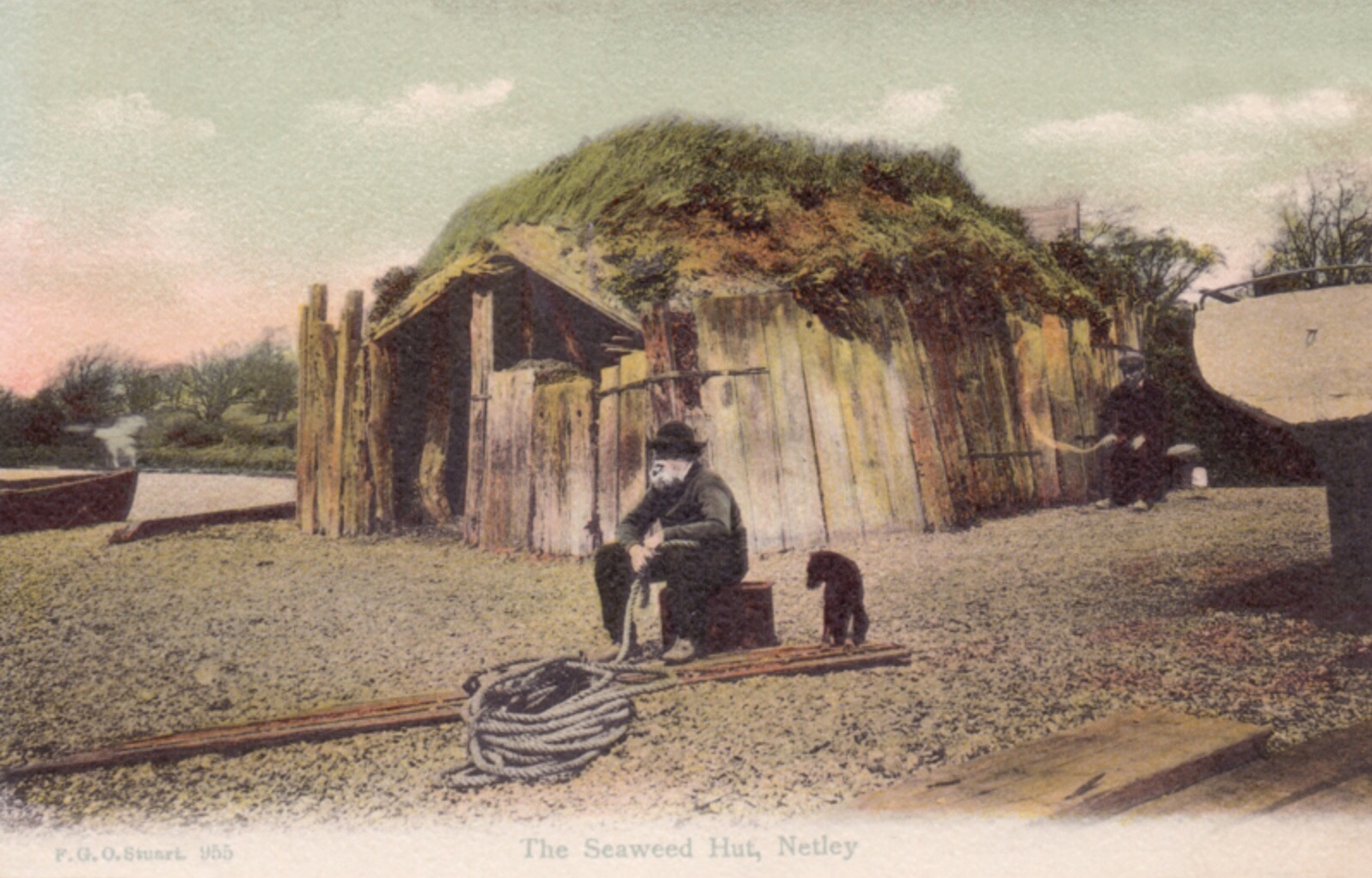 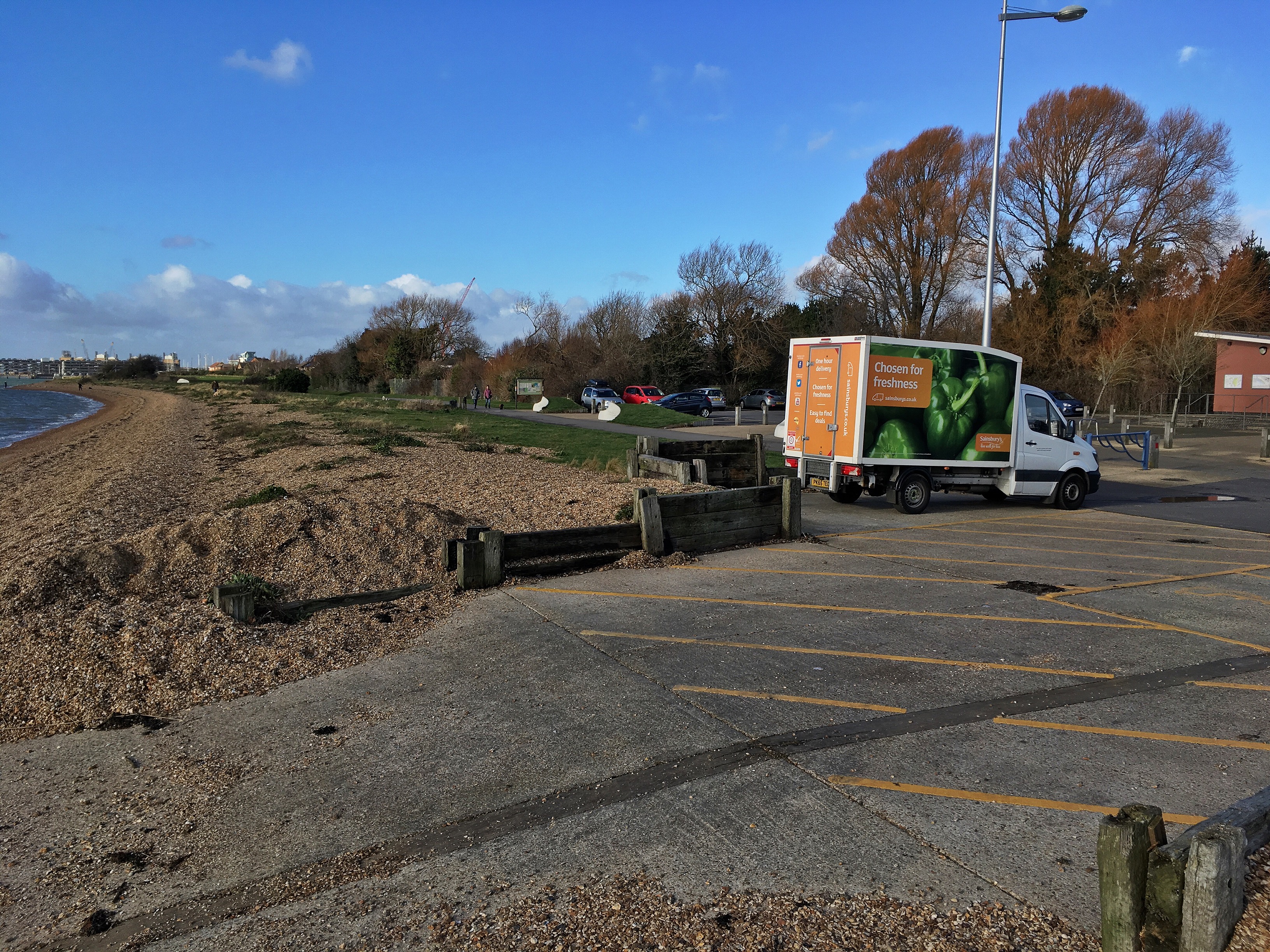 The second postcard was a little easier. It was taken just beyond the hut and looked back along the shore towards Netely. After a couple of attempts I came up with a passable recreation. Of course, there were no tall flats back then, or any beach shelters but the green finger of Netely and Victoria Country Park is still recognisable. 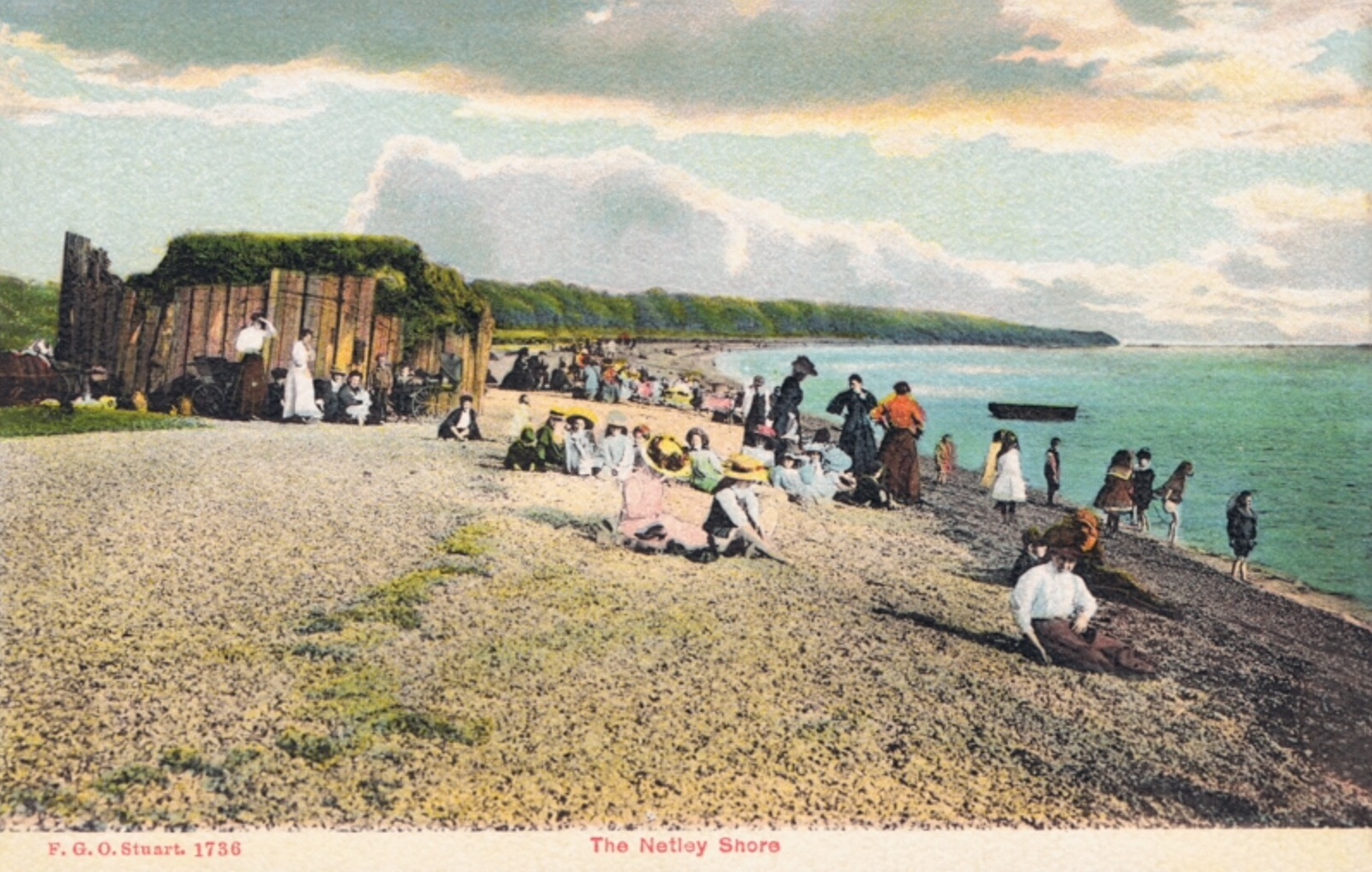 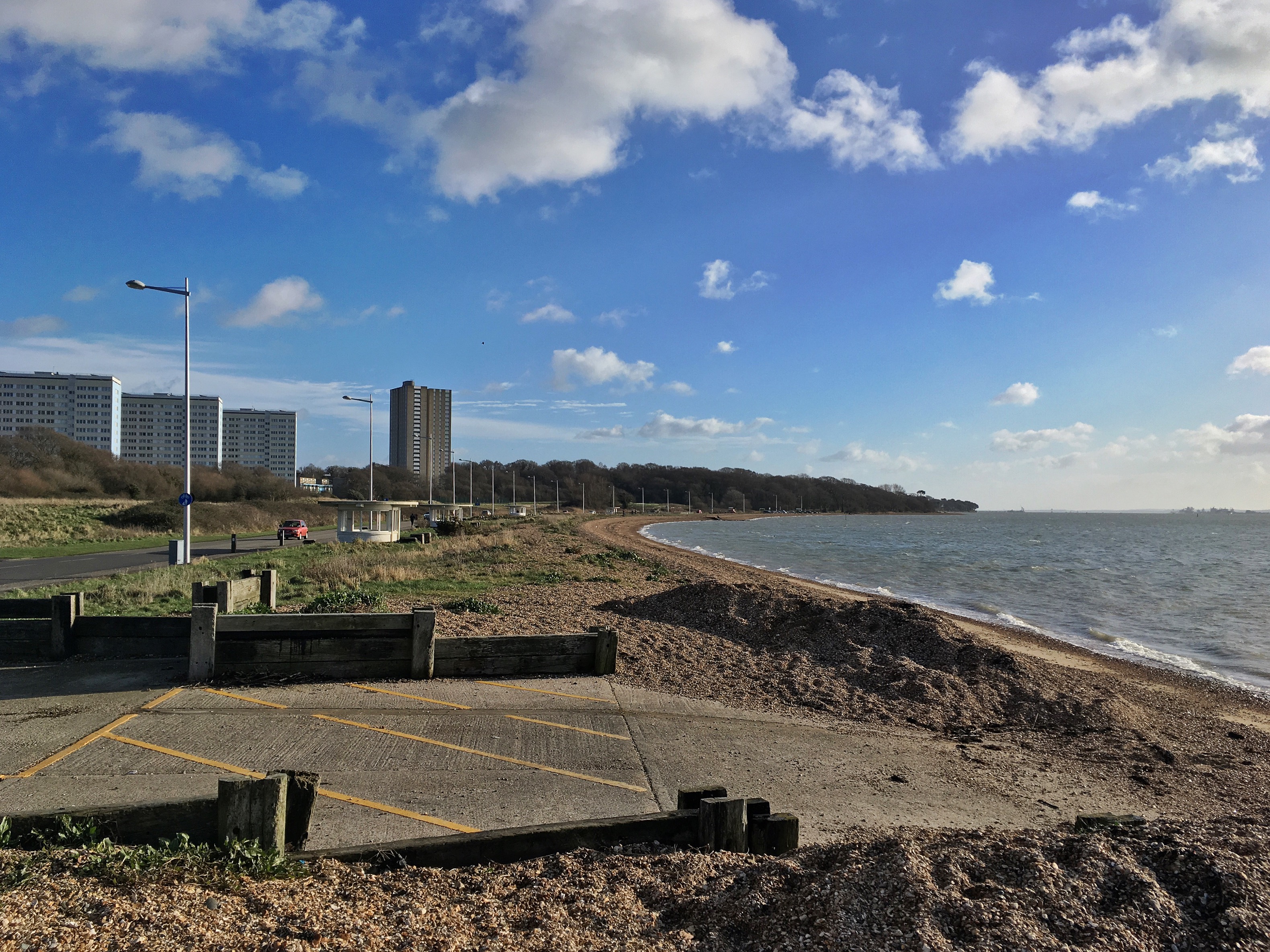 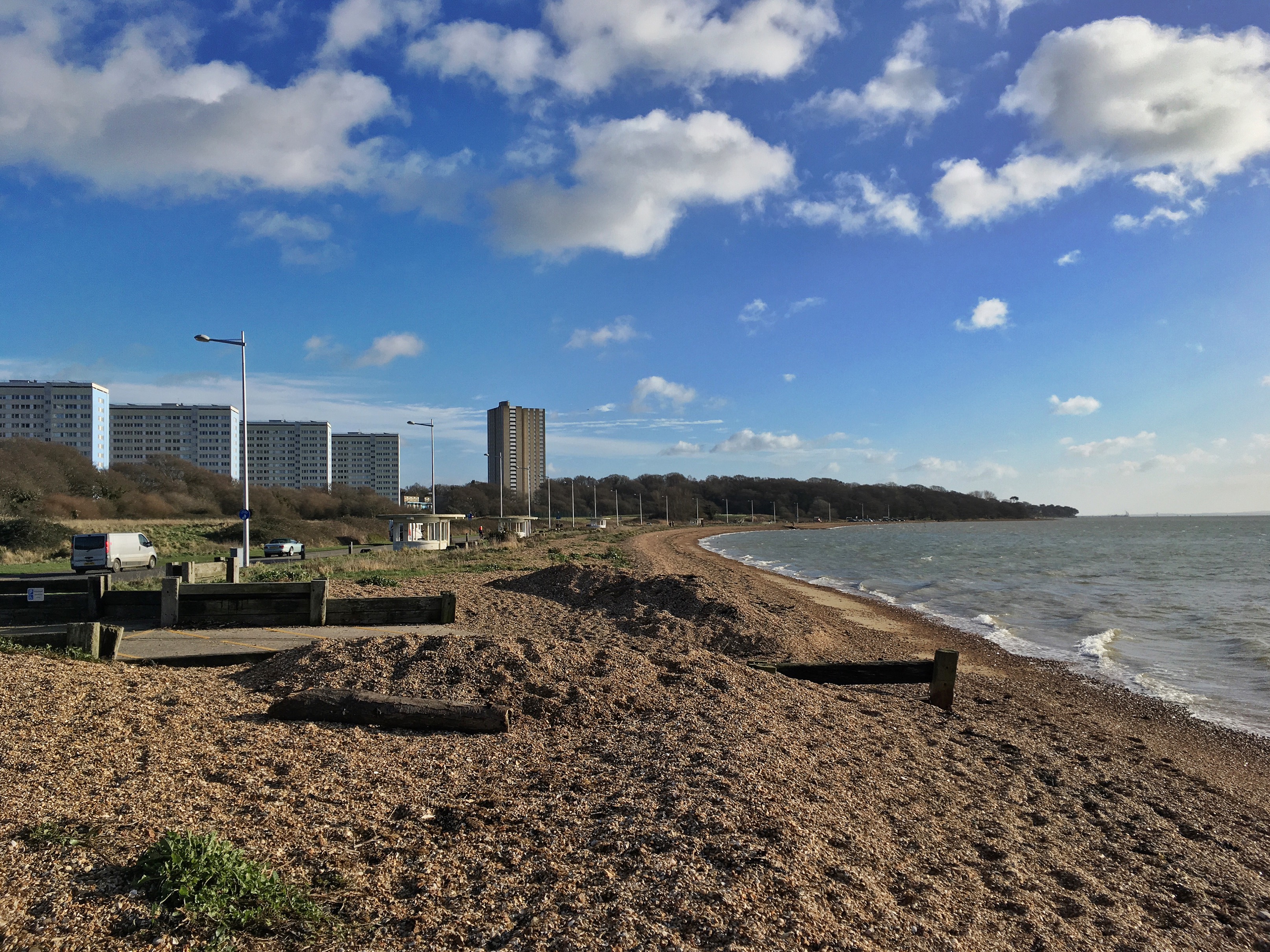 We were now getting close to Weston Grove House, or would have been if it was still there. In 1799, William Chamberlayne’s son, also William, inherited the Chamberlayne land and built Weston Grove House. William was an MP for Southampton from 1818 until his death in 1829 and chairman of the gas company that provided the town with its first gas lamps. He never married and his estate, including the house, passed to his sister Charlotte and then to his nephew Thomas Chamberlayne. It was Thomas who sold off part of the land to Robert Wright to build Mayfield House. From him Weston Grove passed to his eldest son, Denzil and from him to Tankerville Chamberlayne in 1876. Today the house is nothing but a memory and a name on old maps, but, in its day it was beautiful.

To those who like water scenes (as nineteen twentieths of people do) it is the prettiest spot, I believe, in all England. Mr. Chamberlayne built the house about twenty years ago. He has been bringing the place to greater and greater perfection from that time to this. All round about the house
is in the neatest possible order … the views from this place are the most beautiful that can be imagined. You see up the water and down the water, to Redbridge one way and out to Spithead the other way. Through the trees, to the right, you see the spires of Southampton, and you have only to walk a mile, over a beautiful lawn and through a not less beautiful wood, to find, in a little dell, surrounded with lofty woods, the venerable ruins of Netley Abbey, which make part of Mr. Chamberlayne’s estate. Tankerville also became a Southampton MP but this didn’t protect his land from compulsory purchase. In 1909 he was forced to sell one hundred and eighty nine acres of the land between his lovely house and the sea to the London and South Western Railway to build a gigantic dry dock. Tankerville had a history of willingly donating land to good causes, like the recreation ground donated to the villagers of Netely, another recreation ground in Newport on the Isle of Wight, land to build St Boniface Church in Chandlers Ford and Netley Abbey and its grounds, given to the Ministery of Works in 1922. This land was different though. As Cobbett had written, the views from Weston Grove House were a good part of its charm and any building on the land would put paid to them. 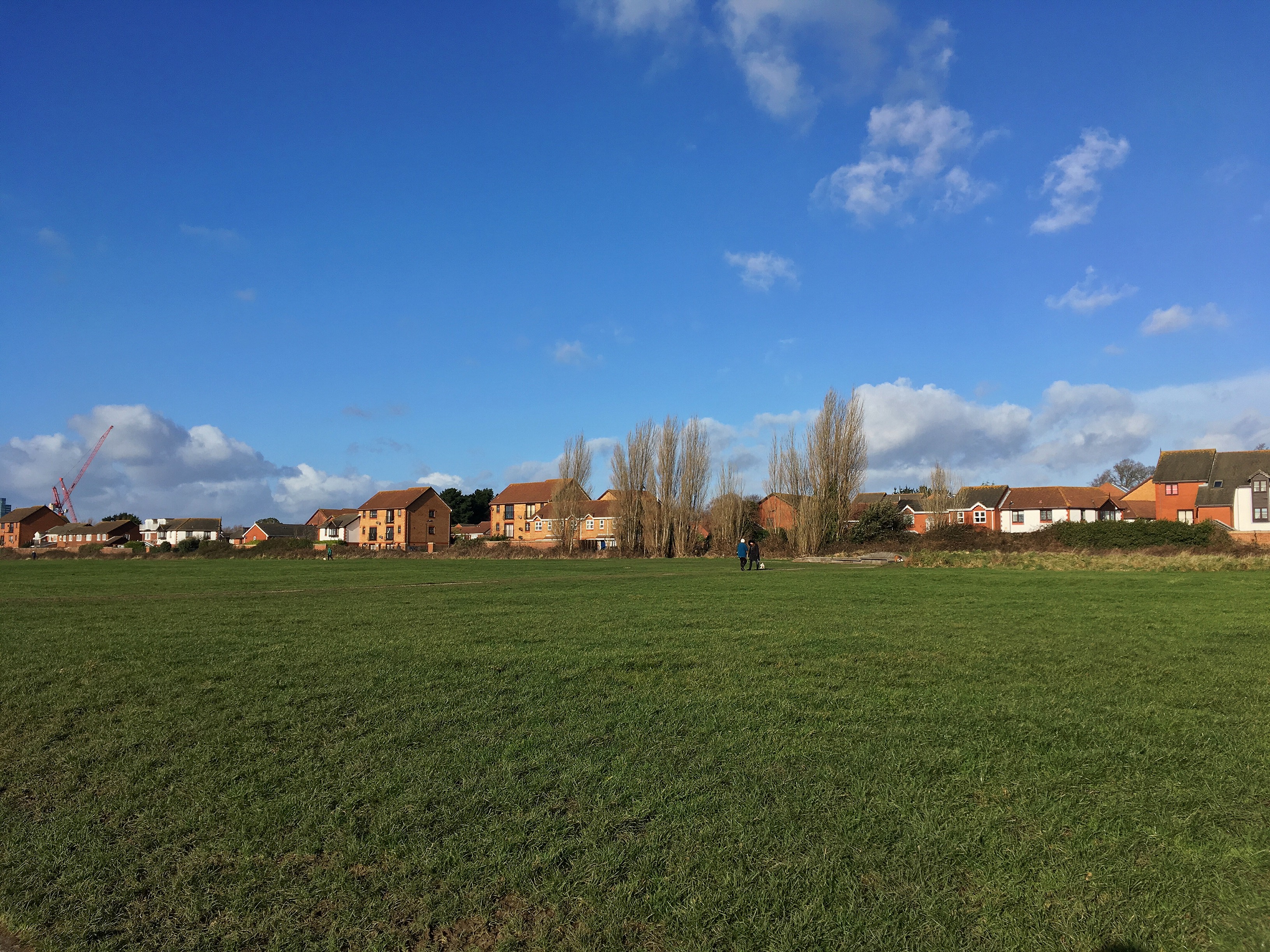 The forced sale of his land coincided with Tankerville s retirement from politics and, perhaps because of the prospect of losing the view, he moved to the family home at Cranbury Park, near Hursley. As it turned out the dry dock never materialised but, in 1917, the Ministry of Munitions bought the land and built the Rolling Mills Factory to produce brass strip for shell cases. Tankerville Chamberlayne died in 1924. His land passed to his son, also called Tankerville and then to his daughter, Penelope Mary Alexandera who married Major Nigel Donald Peter Macdonald and changed her name to Chamberlayne-Macdonald. The Rolling Mills eventually became a Royal Naval Stores, finally closing in 1987. By then, Weston Grove House was long gone, demolished in 1940, and most of the estate lands had become the Weston Council Estate. These days the Rolling Mills site is a lovely, if blowy, green area with benches where people can rest and enjoy the sea views taken from Chamberlayne. 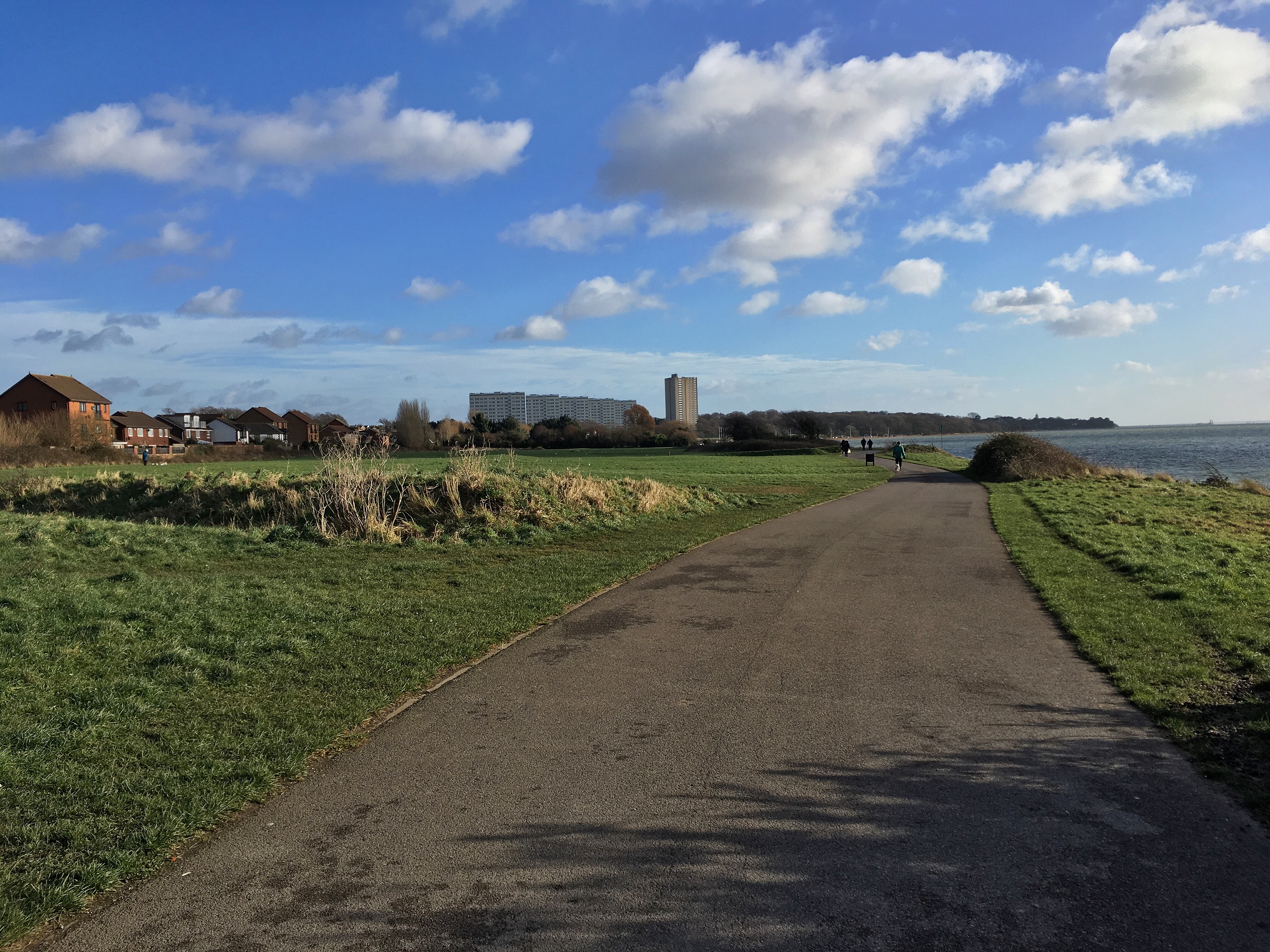 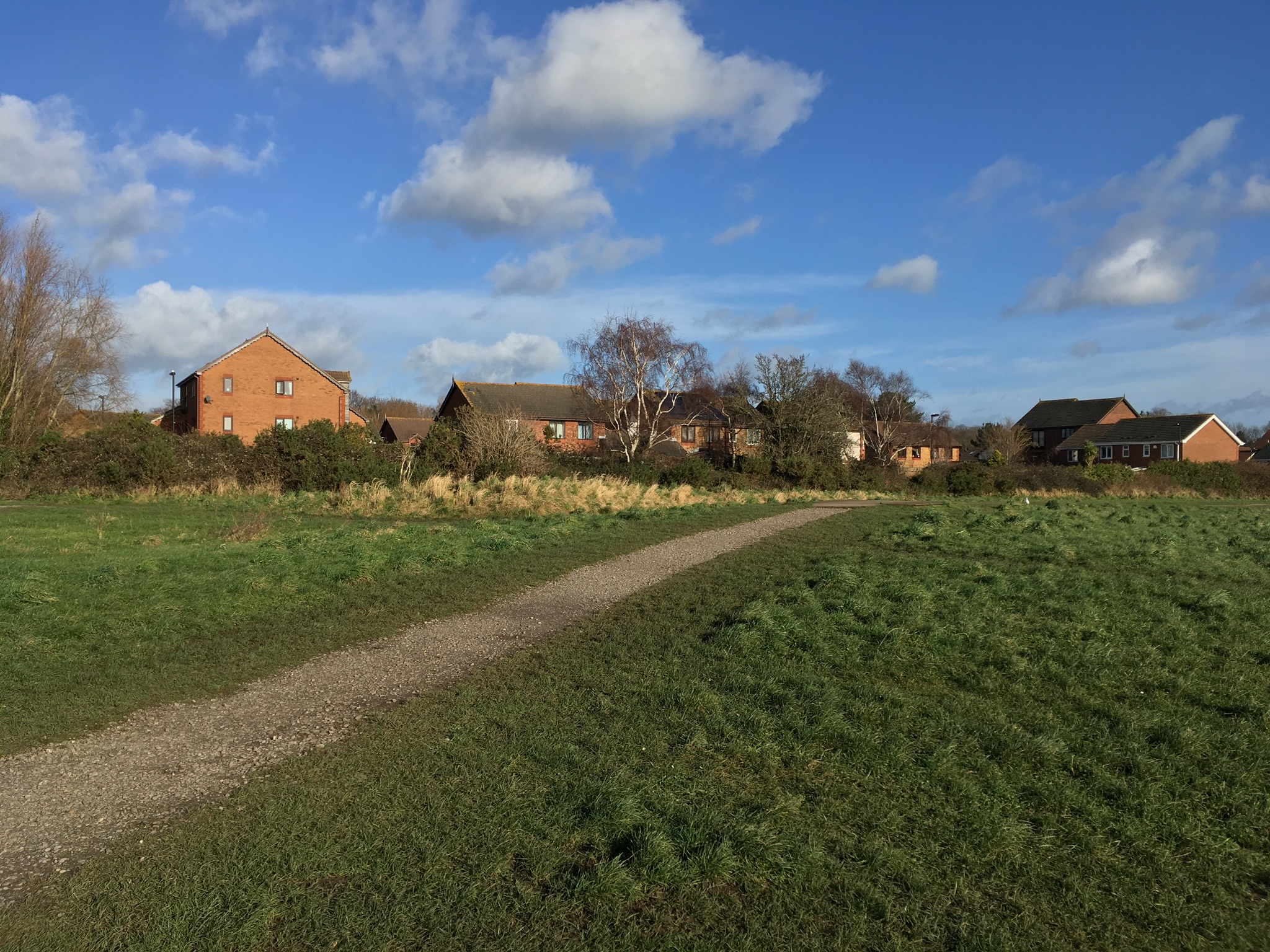 We were glad to come to the end of the blustery shore, pass the clanking masts of the sailing club and get to the relative shelter of the buildings and shops of Woolston. The wind was still in our faces, making walking hard but home wasn’t too far away. As we walked towards it we talked about the family that shaped the face of so much of this city. The estate may be nothing but a memory but the Chamberlayne name and legacy lives on in the name Weston, road names like Chamberlayne Road, Tankerville Road, Weston Grove Road, Obelisk Road and the Chamberlayne Leisure Centre.