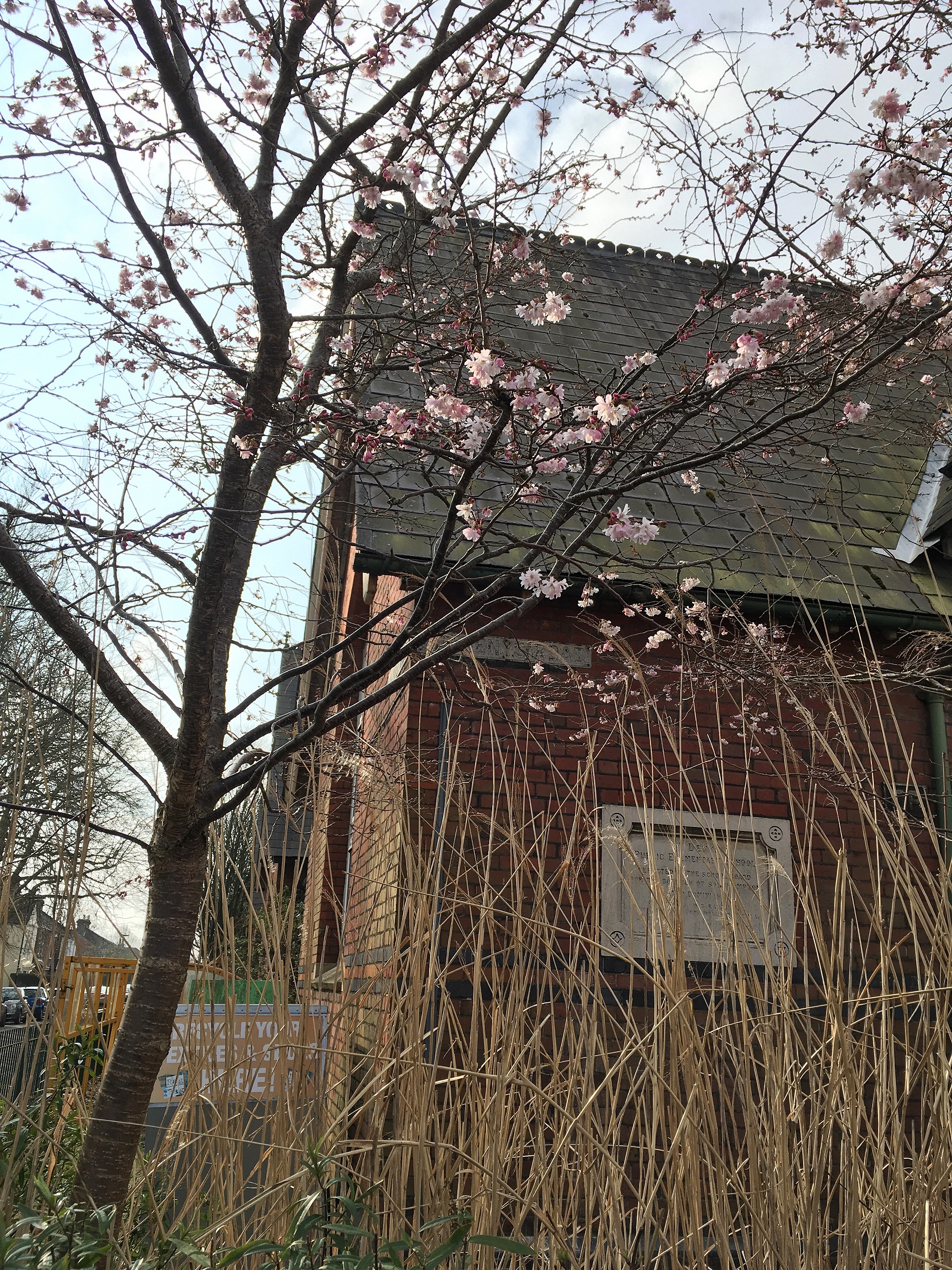 The River Itchen meanders through the centre of Southampton dividing it roughly into two halves, west and east of the river. Almost all my life I’ve lived on the east side, so much of the west side of town is something of a mystery to me. Today CJ and I thought we’d explore a small part of it. There was a plan, albeit a fairly vague one, centred around an unusual church we’d seen from a bus some time ago.

We crossed the river at Cobden Bridge and, still in fairly familiar territory, headed through St Denys. Our route seemed to have been sprinkled with flowers to remind us spring is just around the corner. There was blossom on a tree outside St Denys School, daffodils and primroses beside a fence on Highfield Lane and pale pink camellia and viburnum flowers as we turned towards the Common. 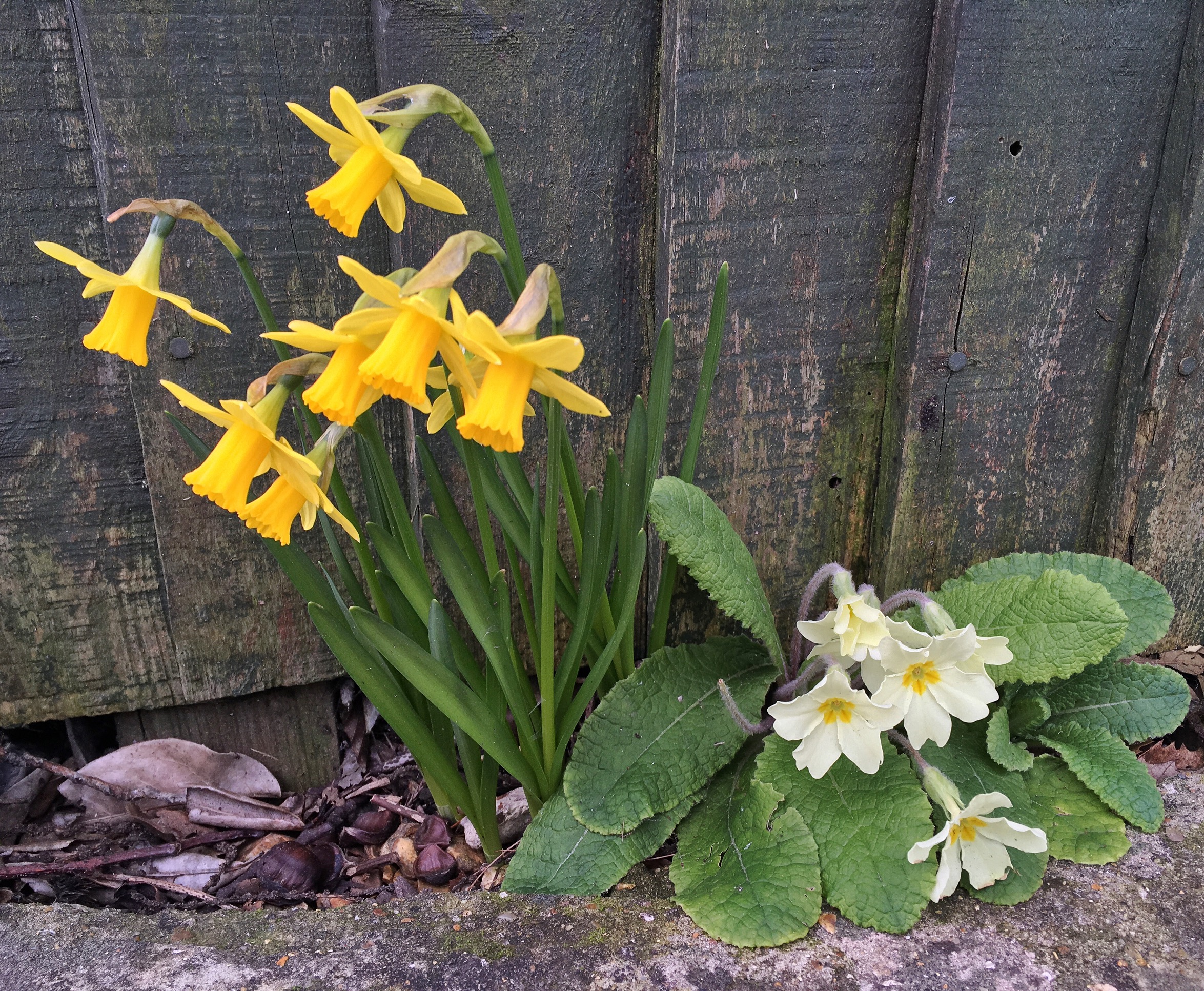 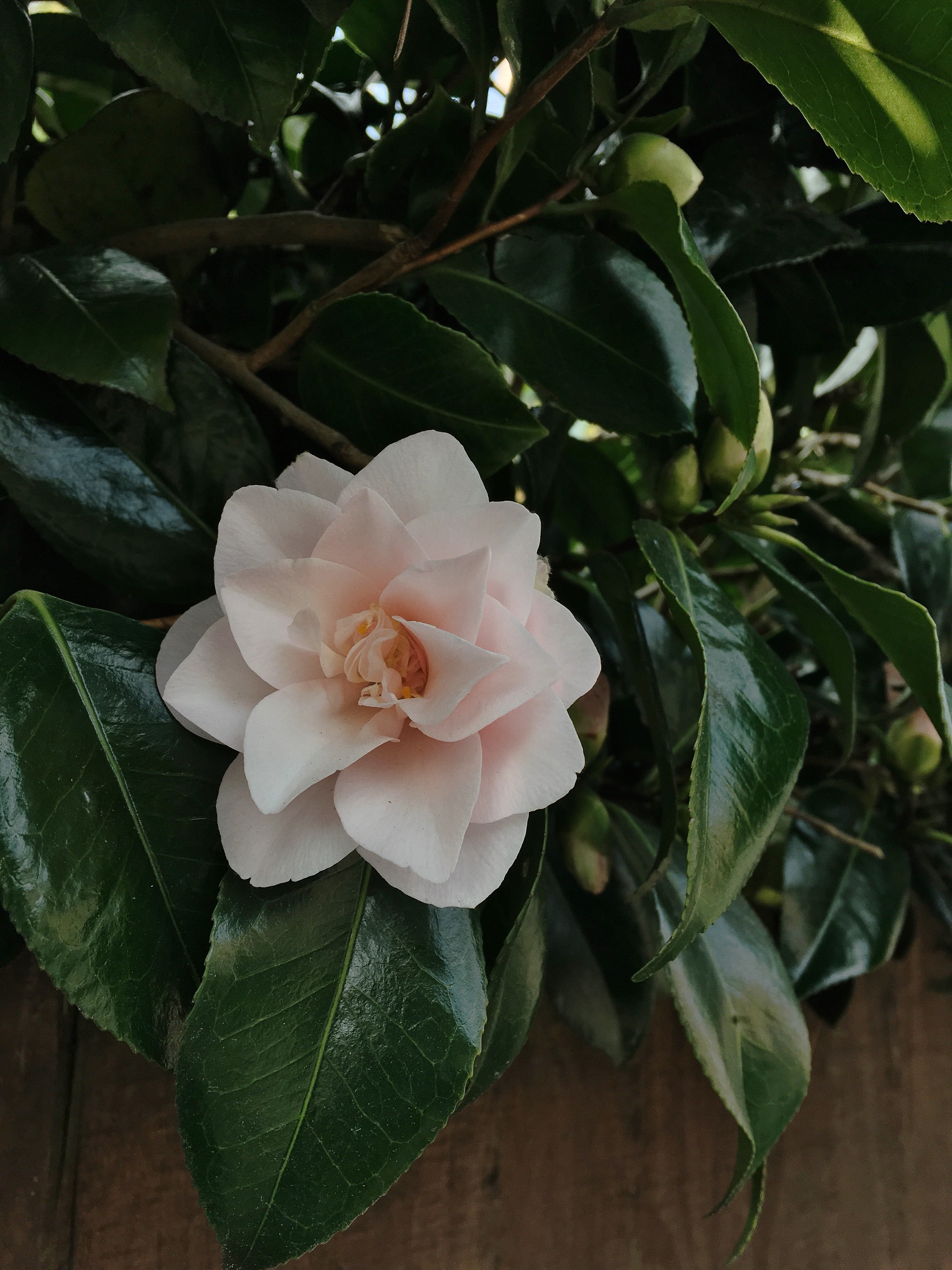 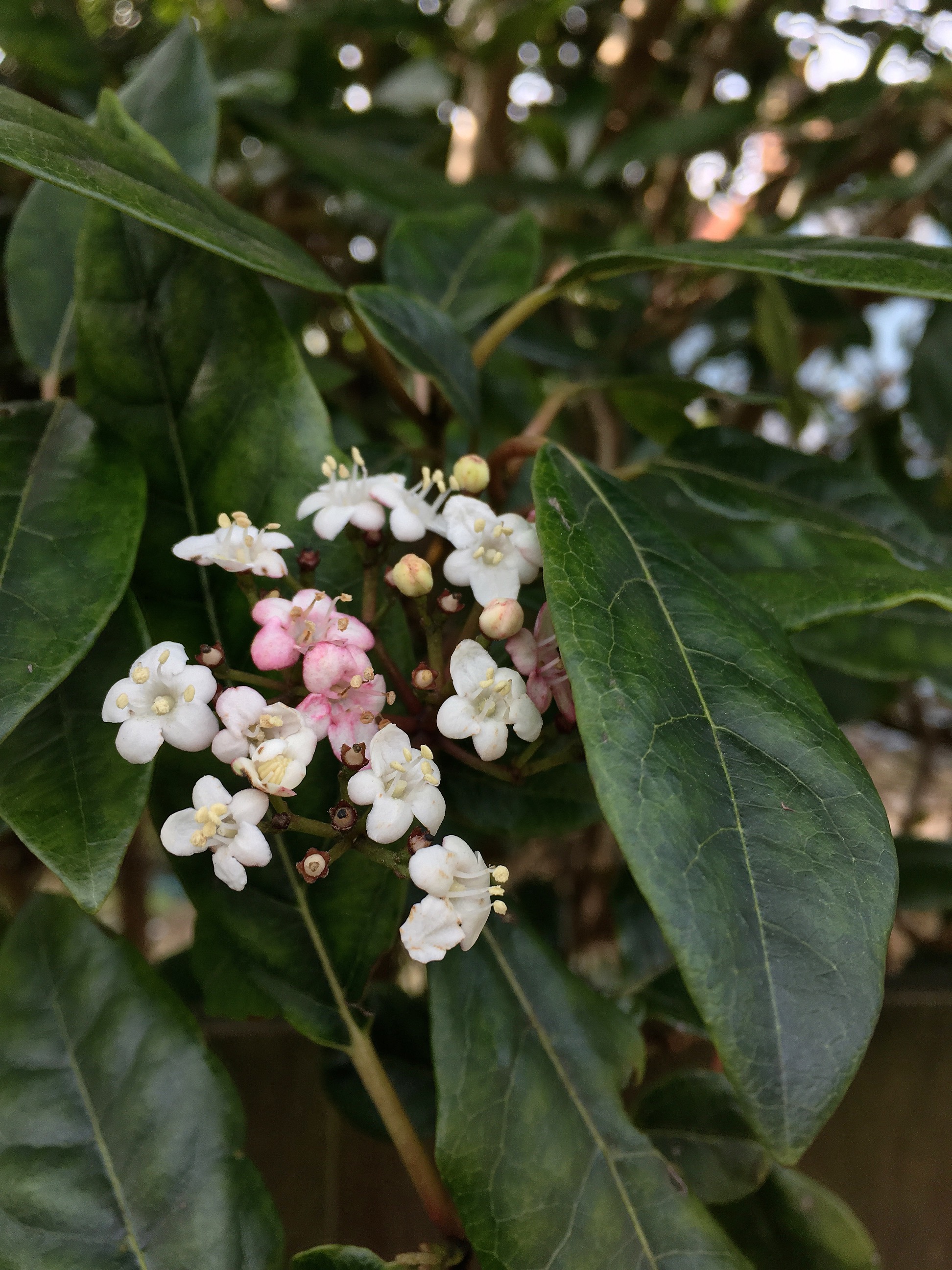 The smell of fresh paint was strong as we strolled down the slope into the Beyond Graffiti Tunnel. For a moment I thought we might get a glimpse of an artist at work but the tunnel was empty. There was plenty of new art to see though, starting with some wonderfully colourful abstract squiggles that seemed to dance in the sunlight by the tunnel entrance. 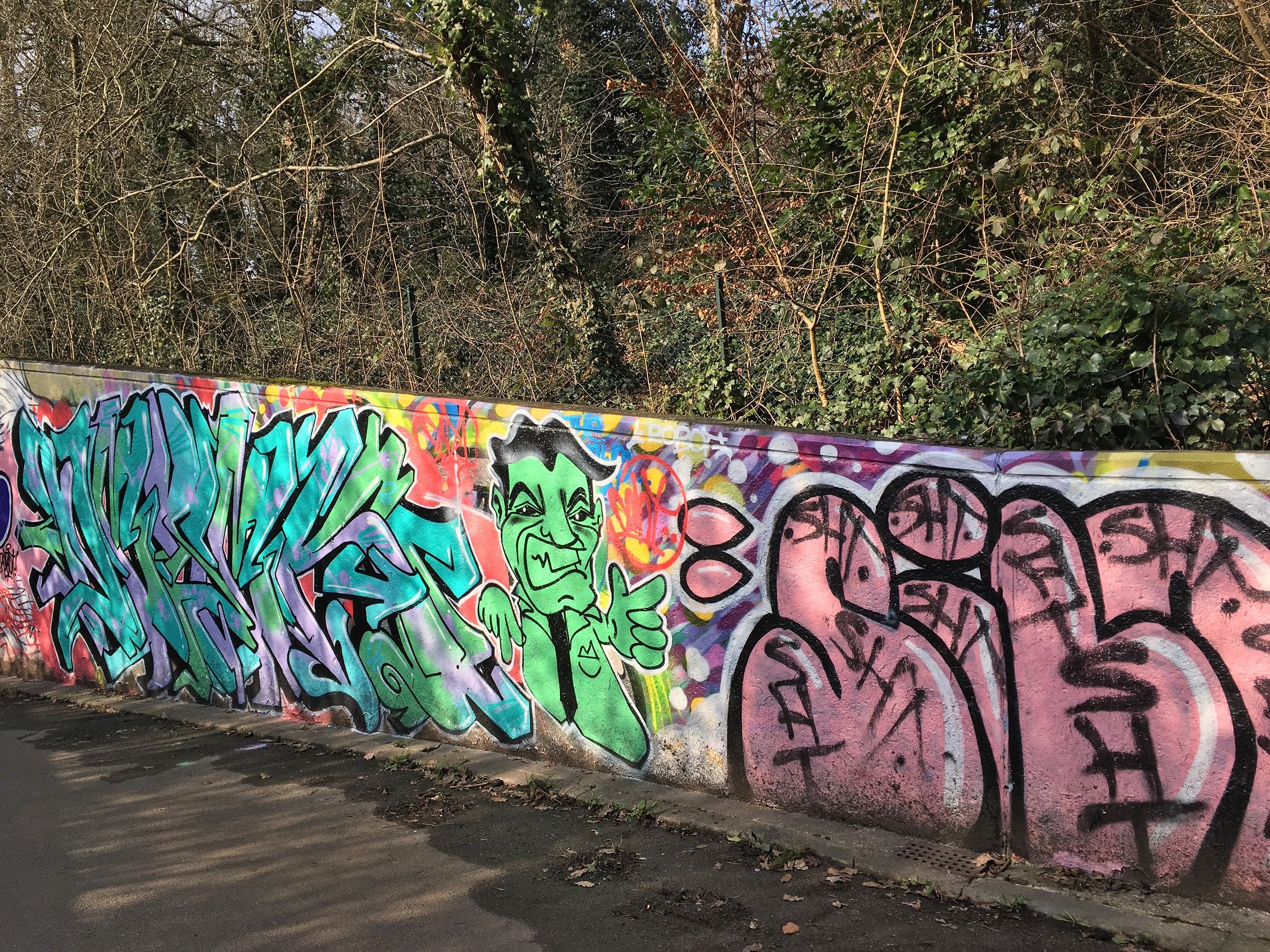 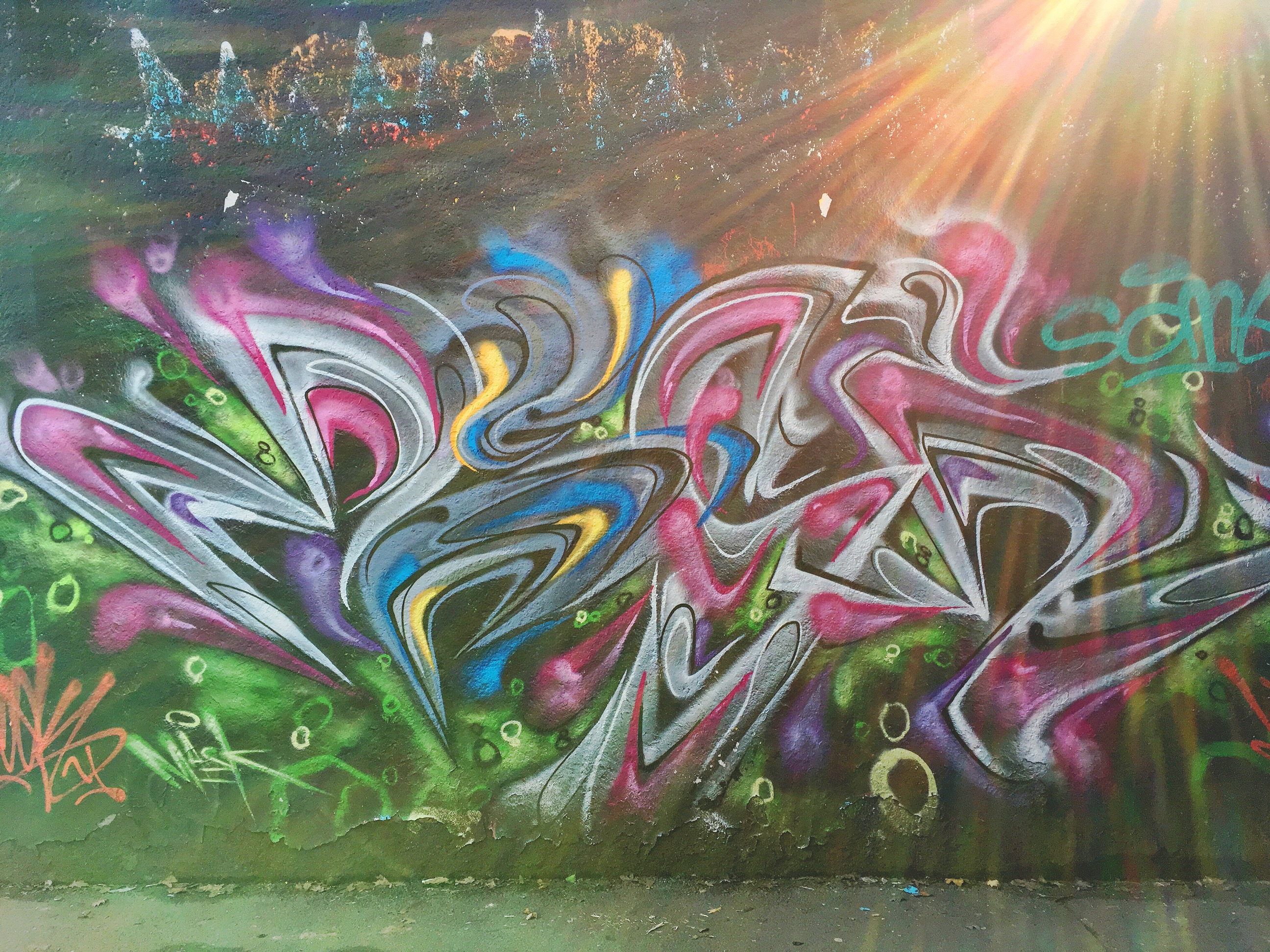 Further on things slowly began to get less ambiguous. It wasn’t long before we realised a theme was developing, an Egyptian theme complete with a pharaoh, pyramids and even a sphinx. One whole side of the tunnel seemed to be an effort to bring a taste of Cairo to Southampton, sadly, without the desert heat. 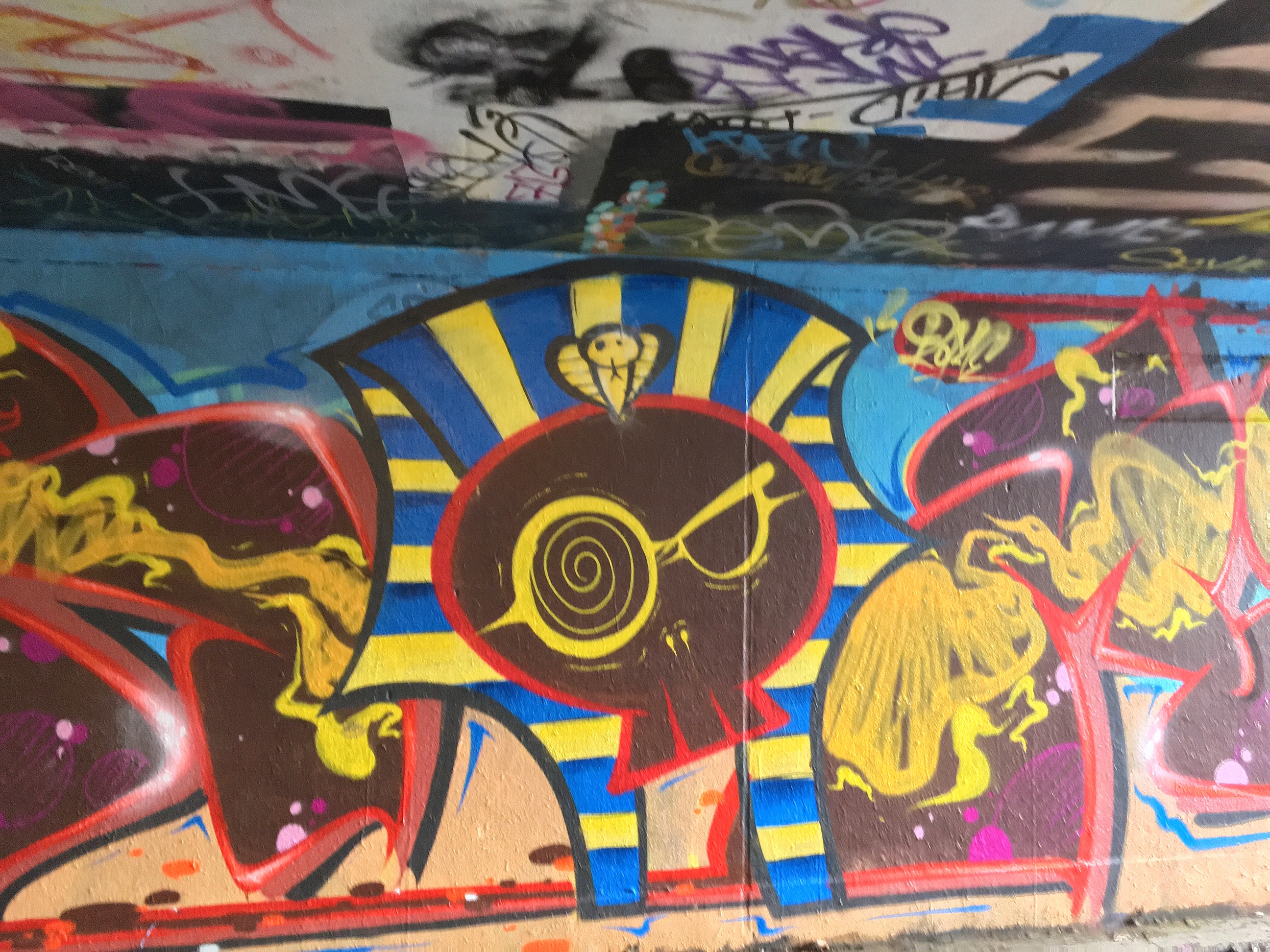 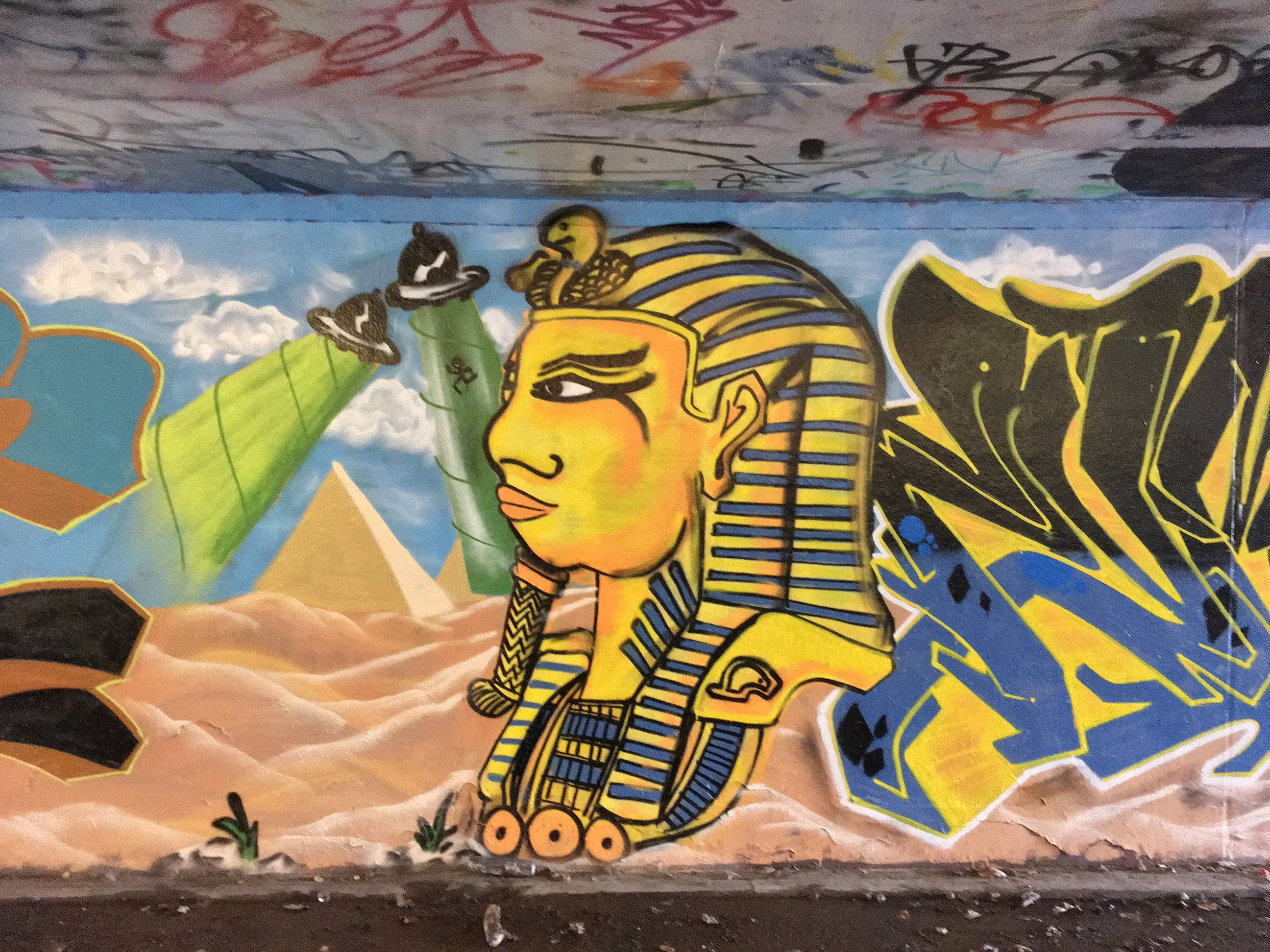 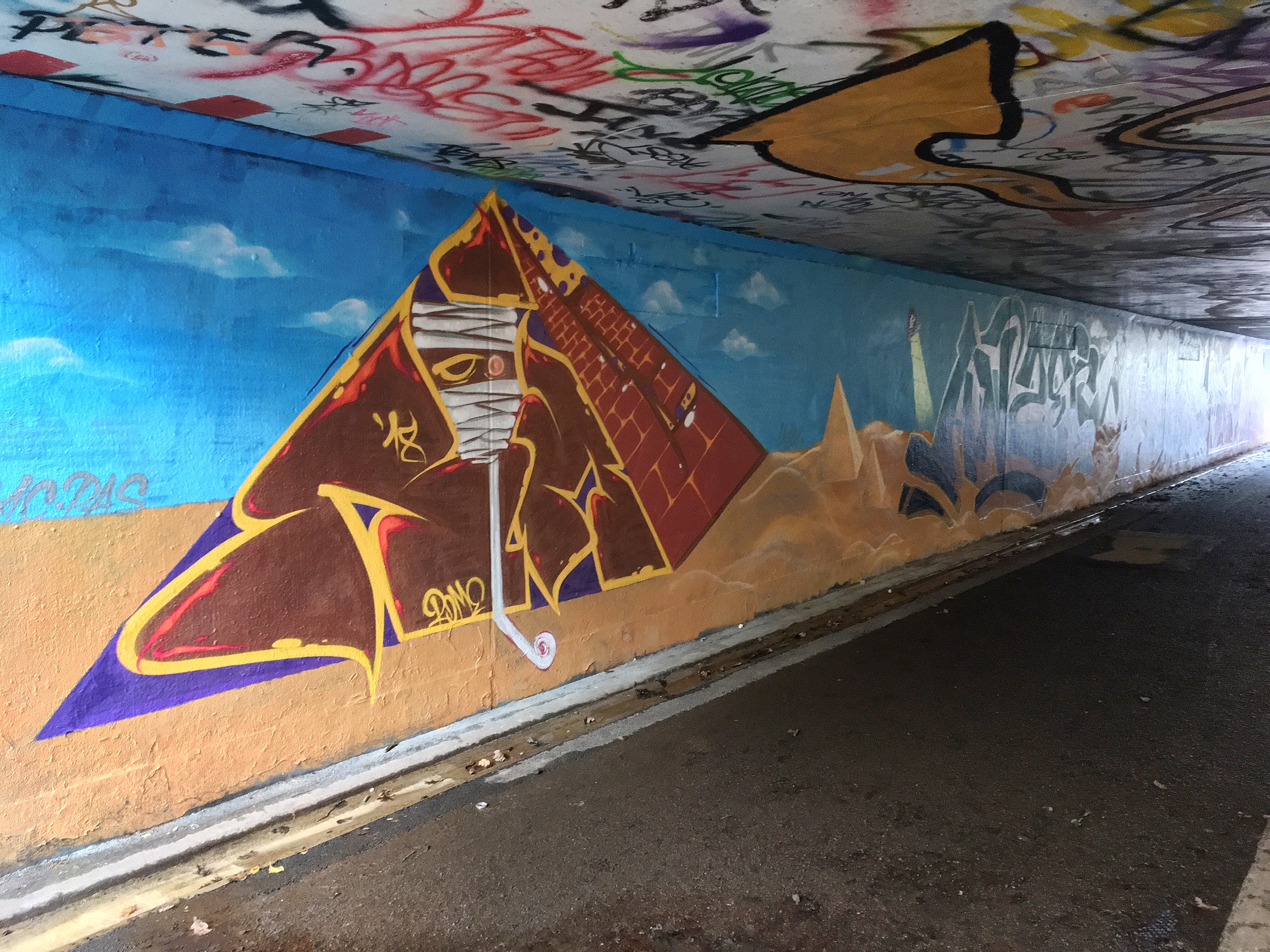 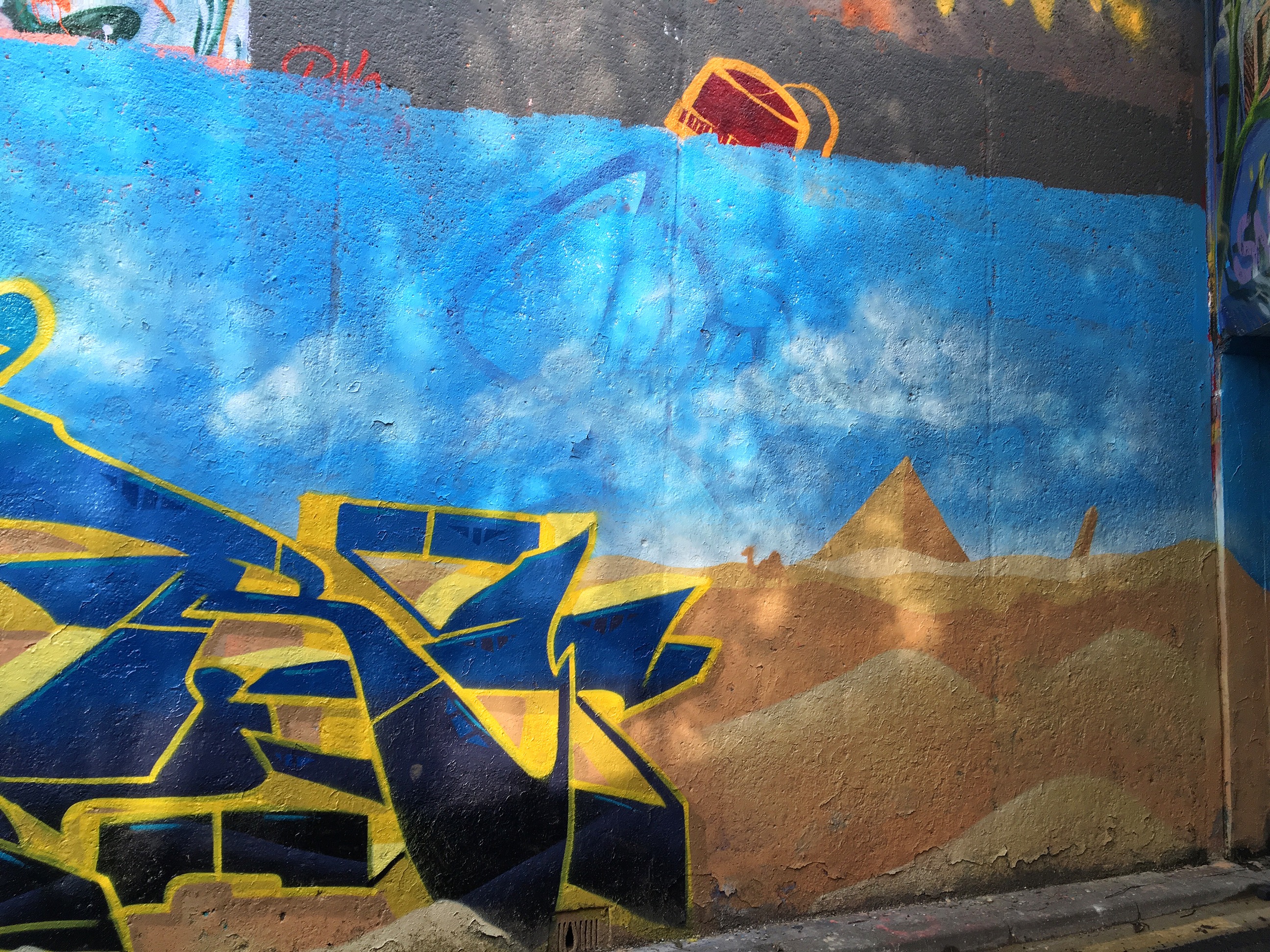 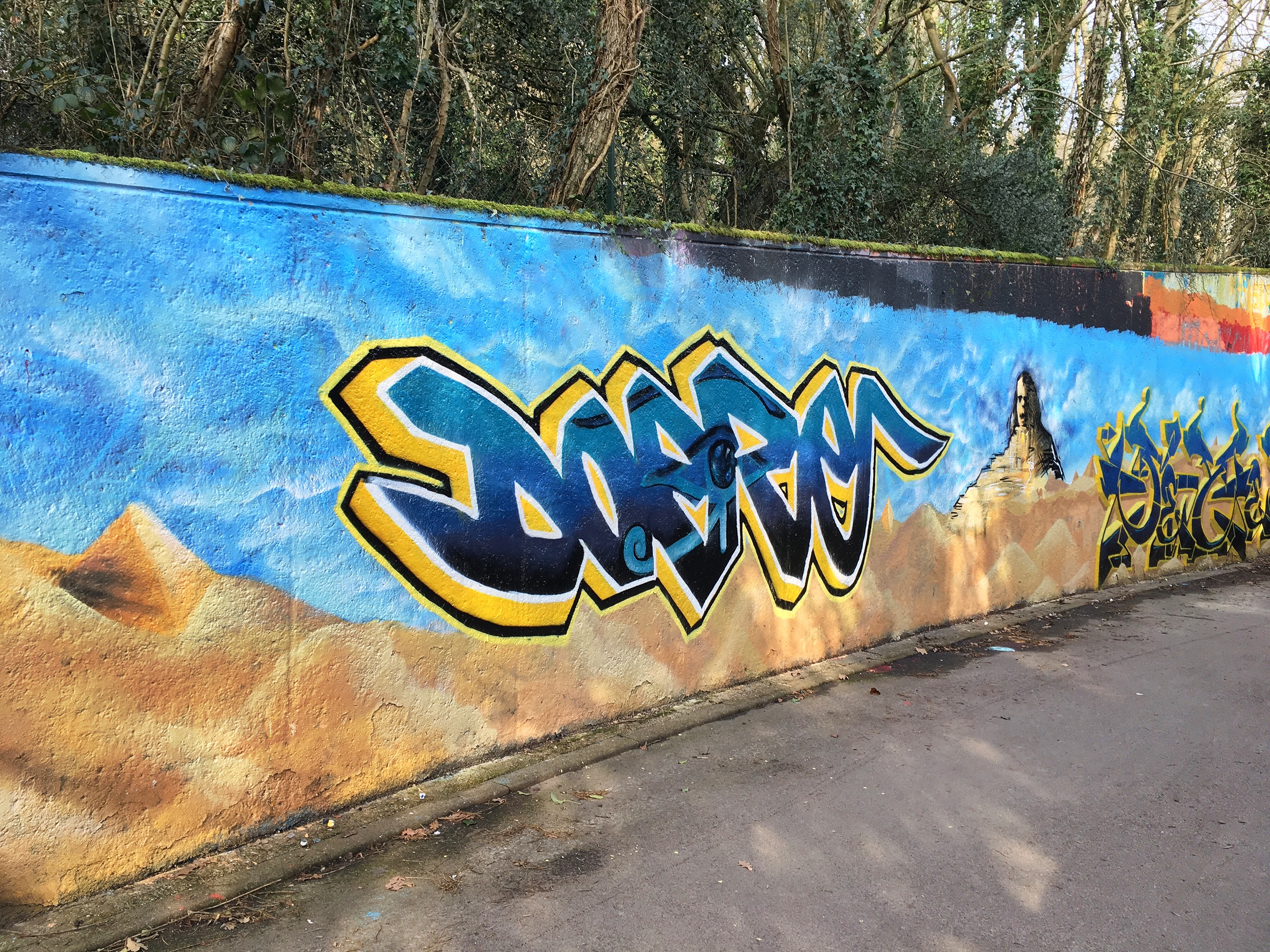 The Common seemed eerily quiet to me as we made our way towards The Bellemoor. Perhaps it’s because I’m more used to the hustle and bustle of a Saturday morning when it’s filled with parkrunners. Once we’d crossed the road and passed the pub we were deep in the wilds of the west side and in fairly unfamiliar territory. 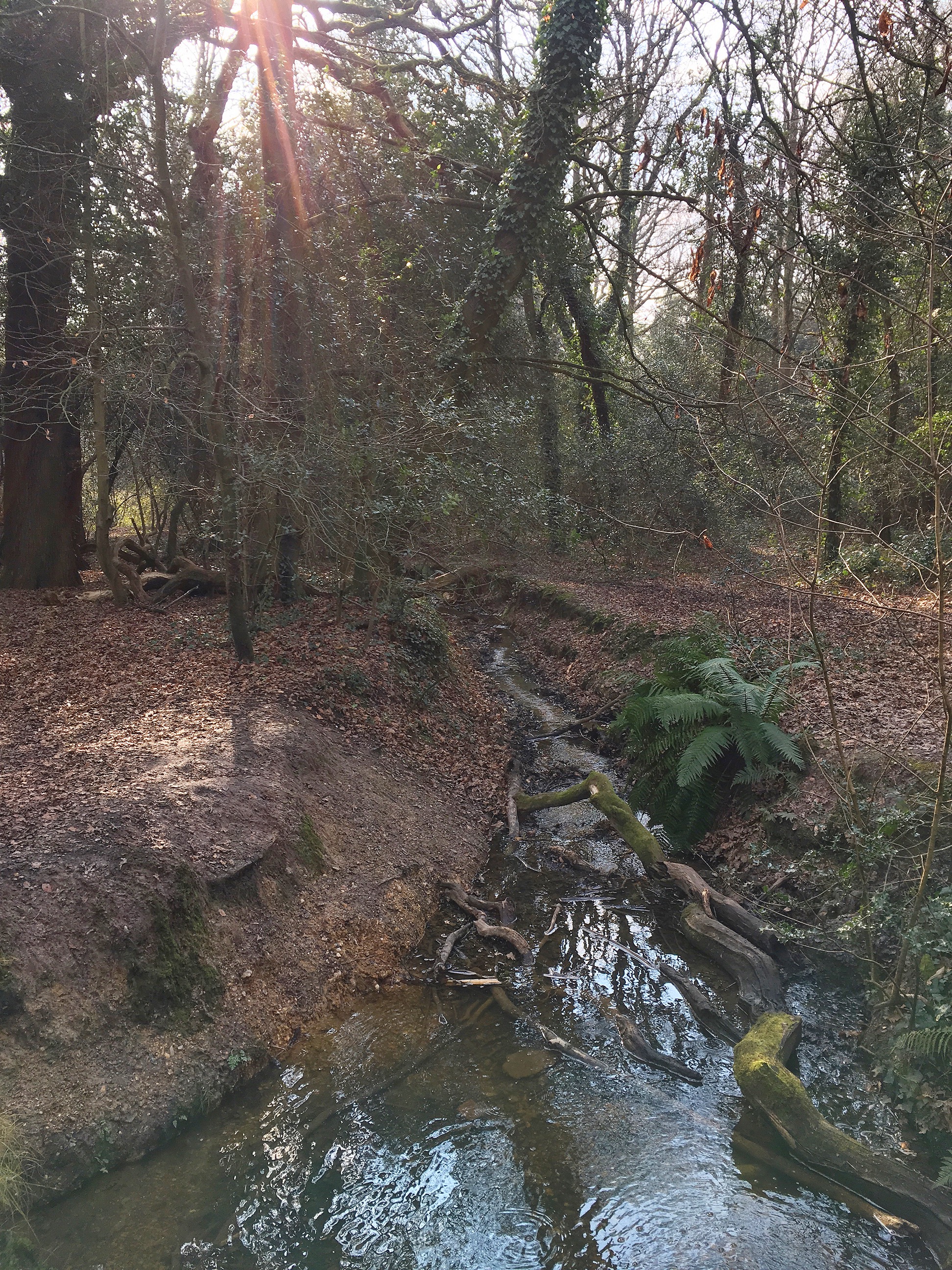 Bellemoor Road led us to St James Road, just as I knew it would. We passed St James Church. It wasn’t the church we’d come to see but we were both slightly disappointed to find it closed. We’d have liked a quick look inside. We walked this way once before when we visited Hollybrook Cemetery. The pretty church had impressed us then, so much so I got a little distracted and we took a wrong turn, much to CJ’s disgust. This time I was determined not to go wrong. There was a quick photograph of the church and a couple of the little park opposite as we passed it by. 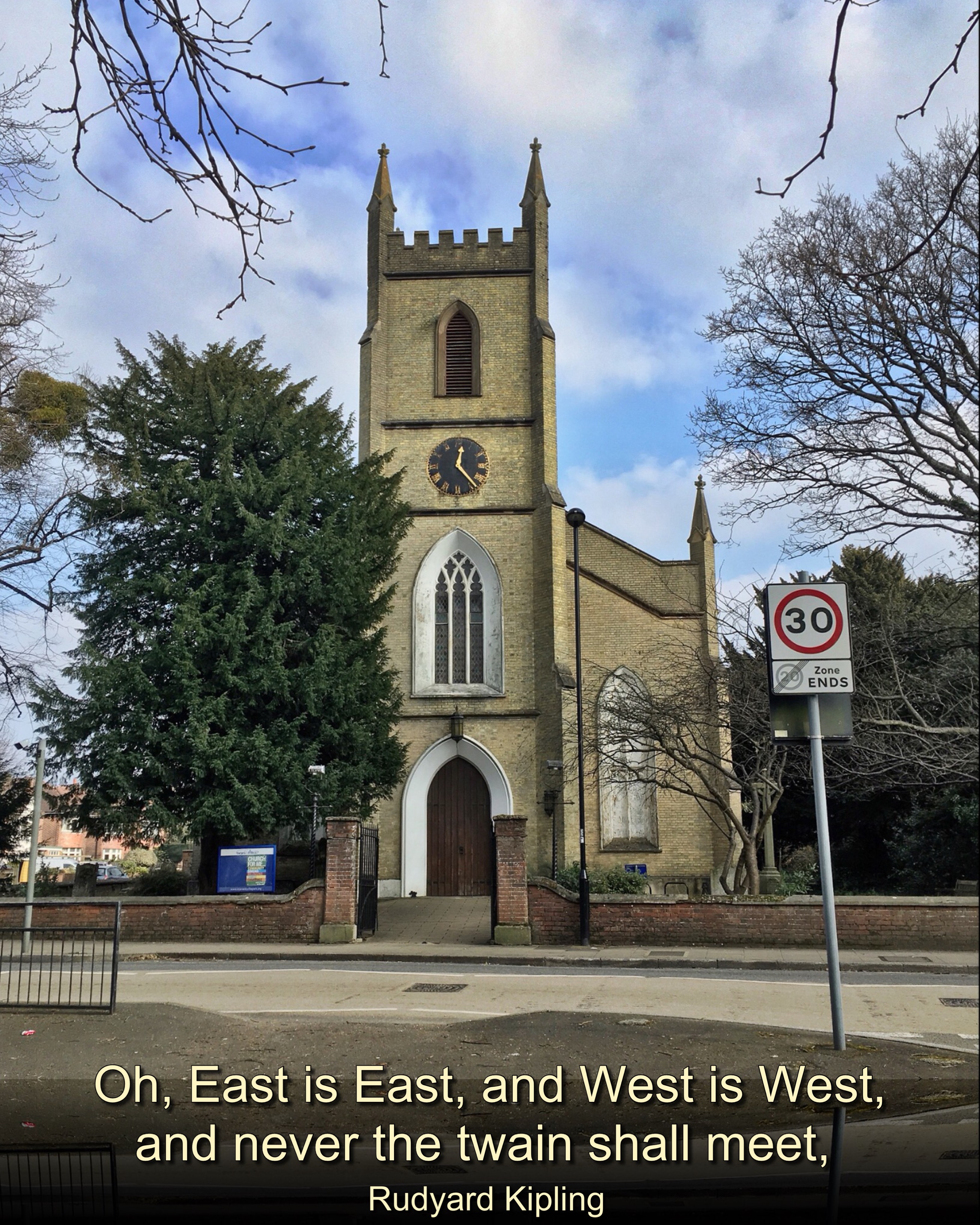 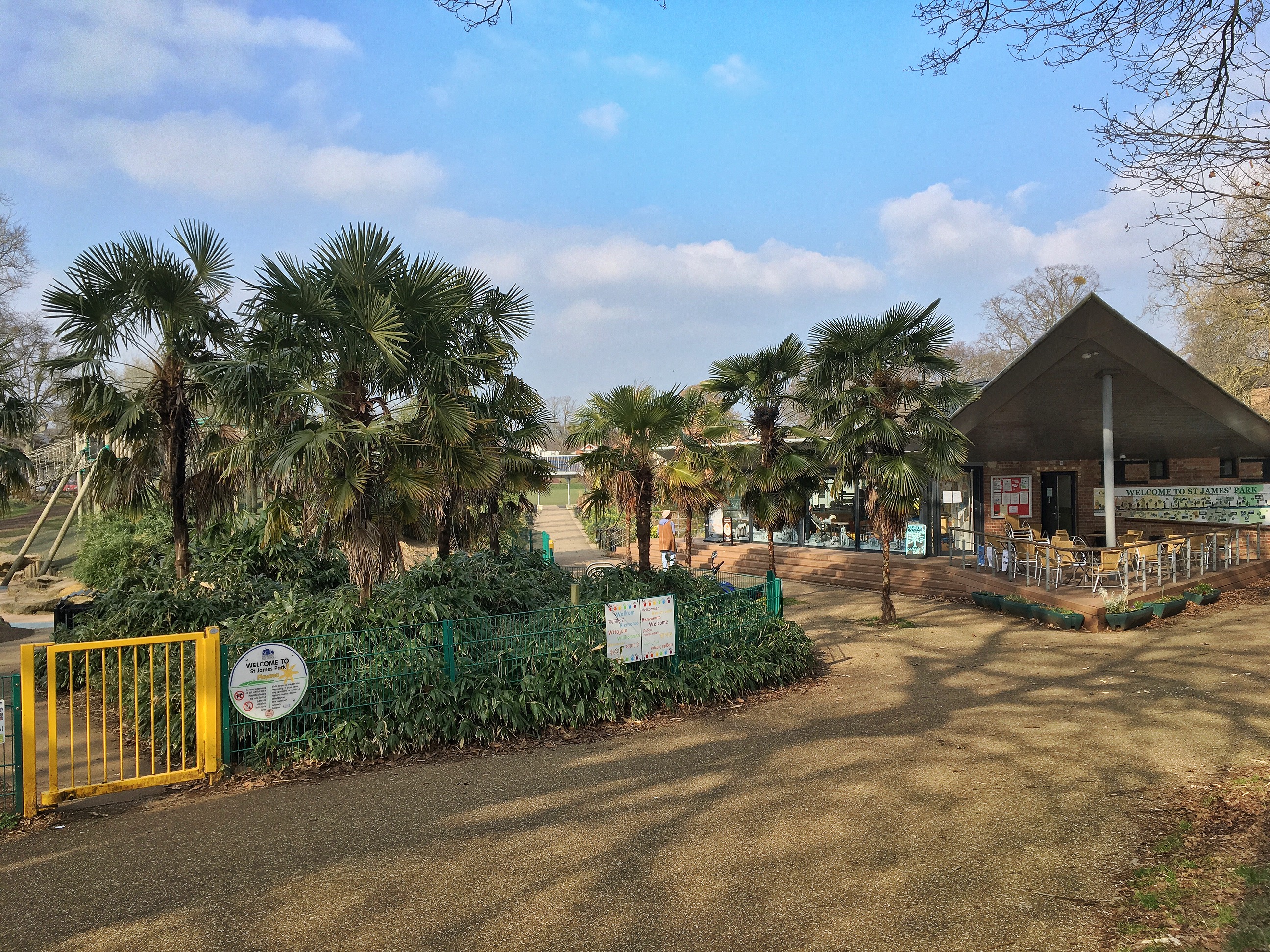 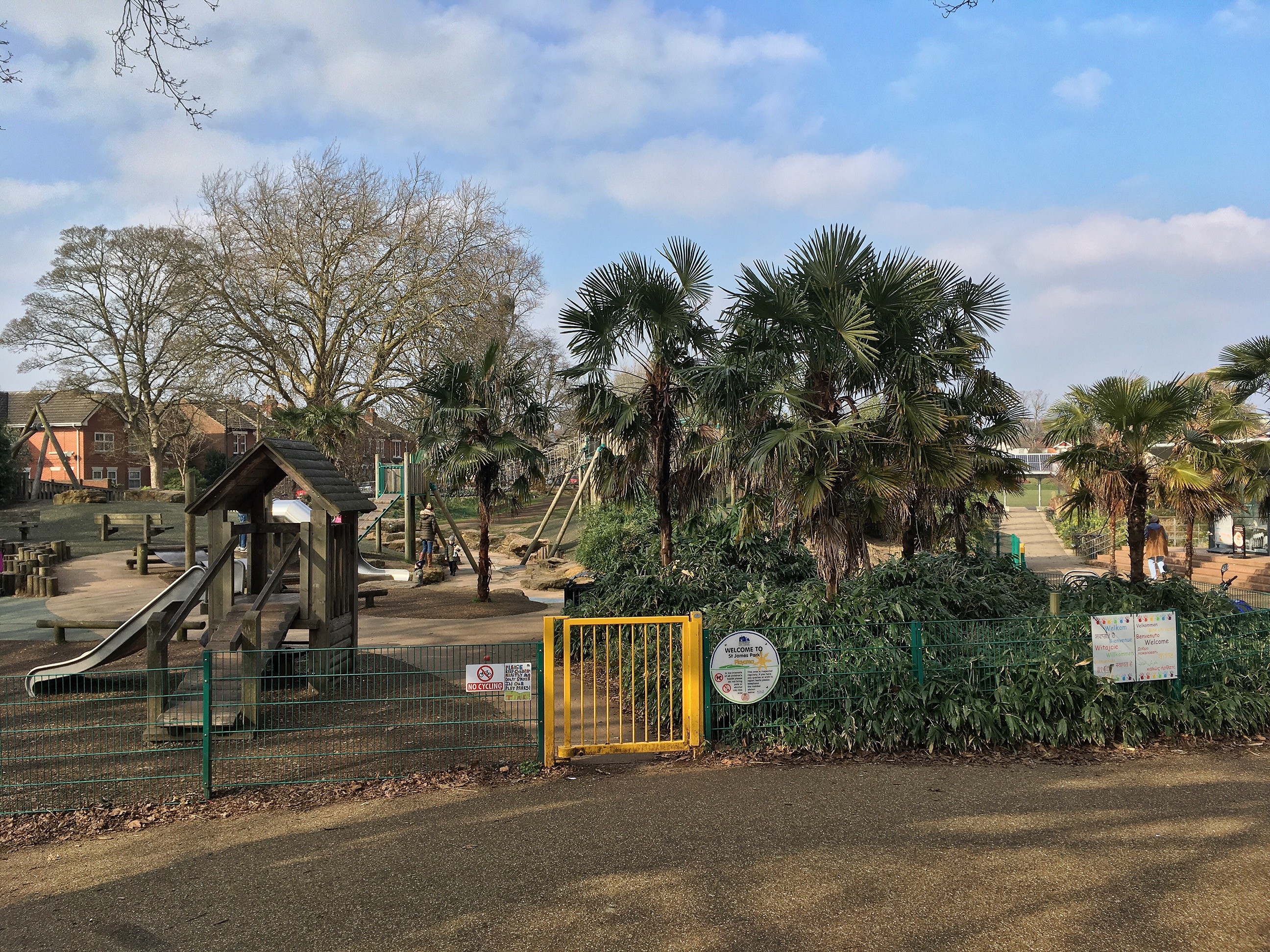 Church Street led us to the centre of Shirley, the largest suburban shopping area in the west of the city. It wasn’t always a bustling placed filled with shops and cars though. The name Shirley comes from Old English scir, meaning bright, and Leah, meaning cleared land in a wood. Once upon a time this would all have been woodland. Later there was a manor, a mill and a village. The lord of Shirley, Nicholas de Sirlie owned the rights to Southampton Common. In 1228 he surrendered those rights in return for a small payment and an agreement that the burgesses of Southampton gave up their rights over the land that would later become Shirley Common. This was the traditional grazing land of the manor of Shirley, also known as Whithedswood Common after Robert Whitehead, the fifteenth century owner of the manor.

Shirley Common covered all the land between Hill Lane and Shirley High Street and included Shirley Warren. In the early nineteenth century this common land was enclosed by Act of Parliament and, in the 1830’s, several villas were built on it. Little by little the open spaces were filled with new streets and houses, occupied by the merchants and tradesmen from the town centre.

At the top of Church Street we passed the Shirley Telephone Exchange. The  battered old door was interesting enough for me to stop and take a photo, although I’m not sure the building is still in use. Outside there was a working telephone box, a rarity in these days of mobile phones. 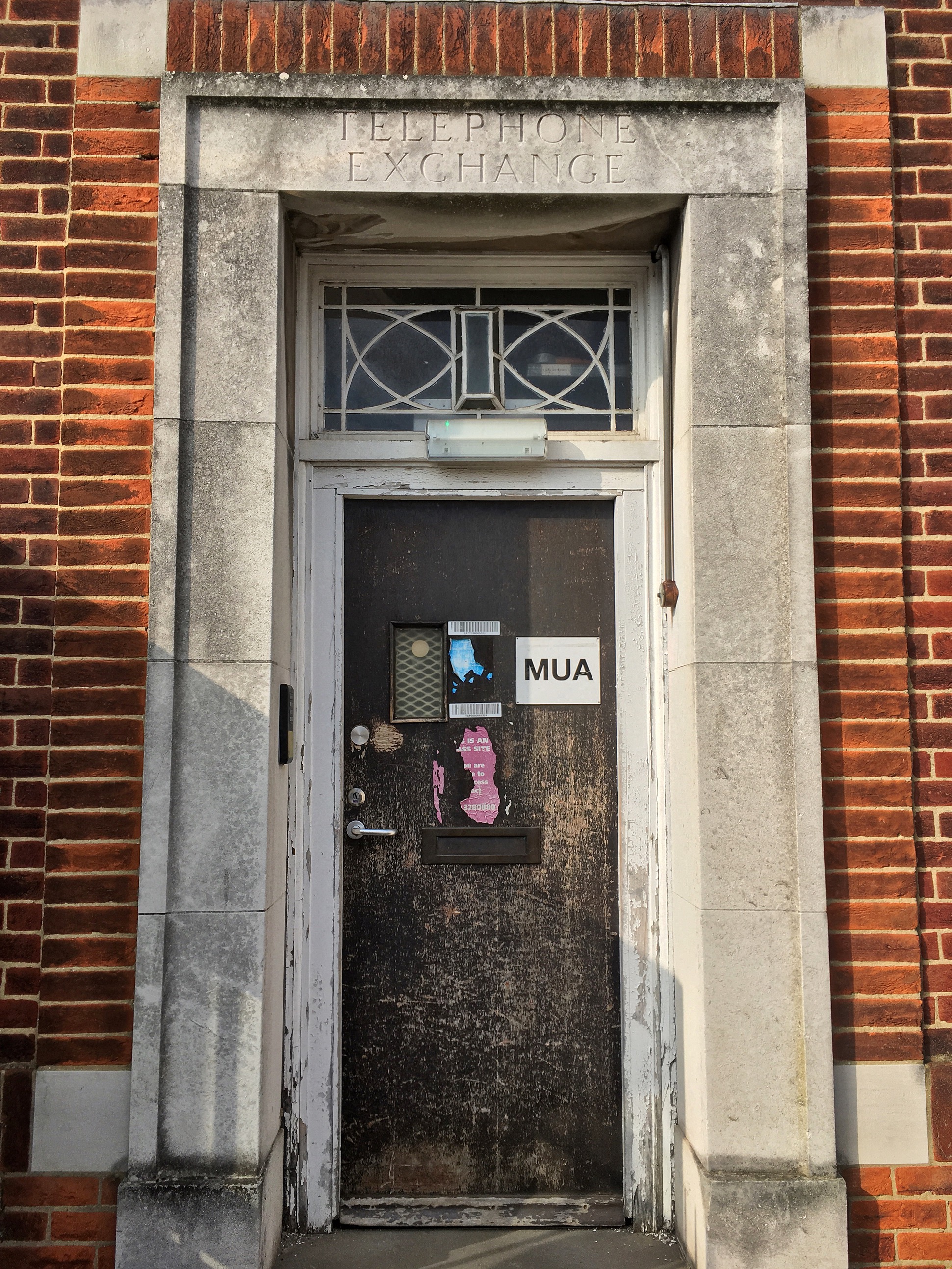 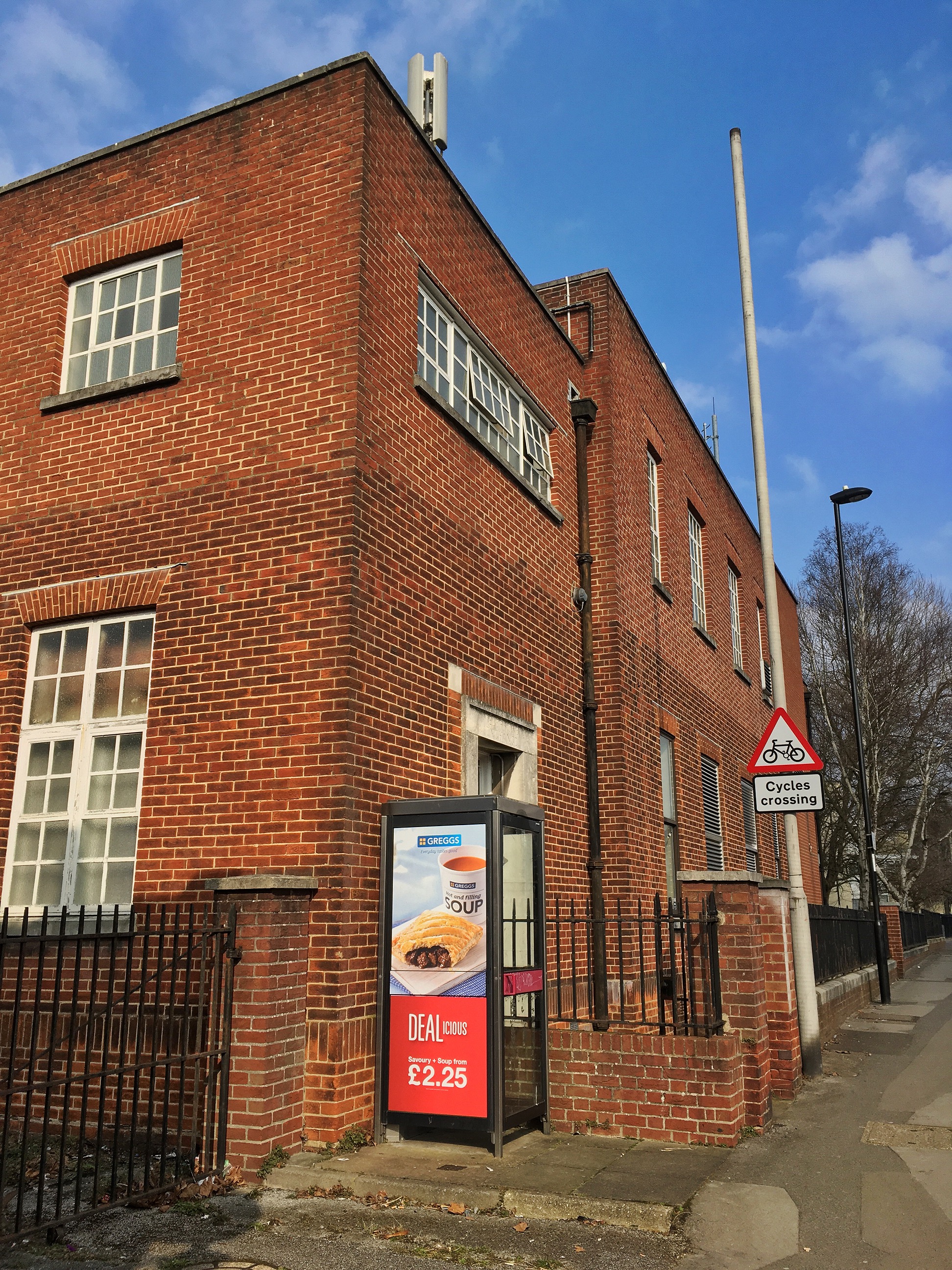 A little further on was Shirely Baptist Church. Built in 1914, it’s a realatively modern red brick church designed to replace the mid nineteenth century  original when the congregation outgrew it. For a while the old church stood beside the new and was used as the church hall but it was replaced by a purpose built hall in 1981. This was not the church we’d come to see but we stopped to admire it anyway. 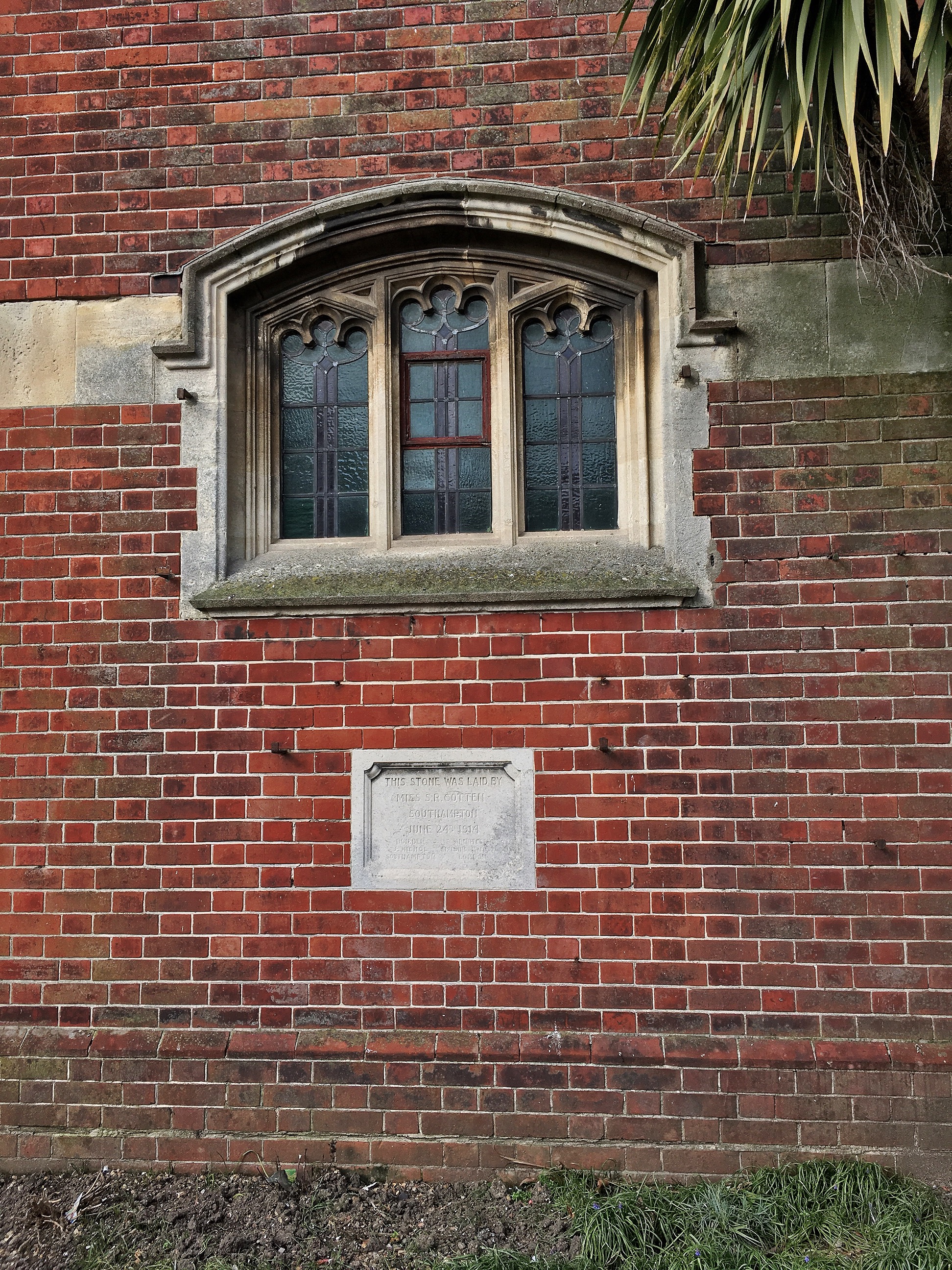 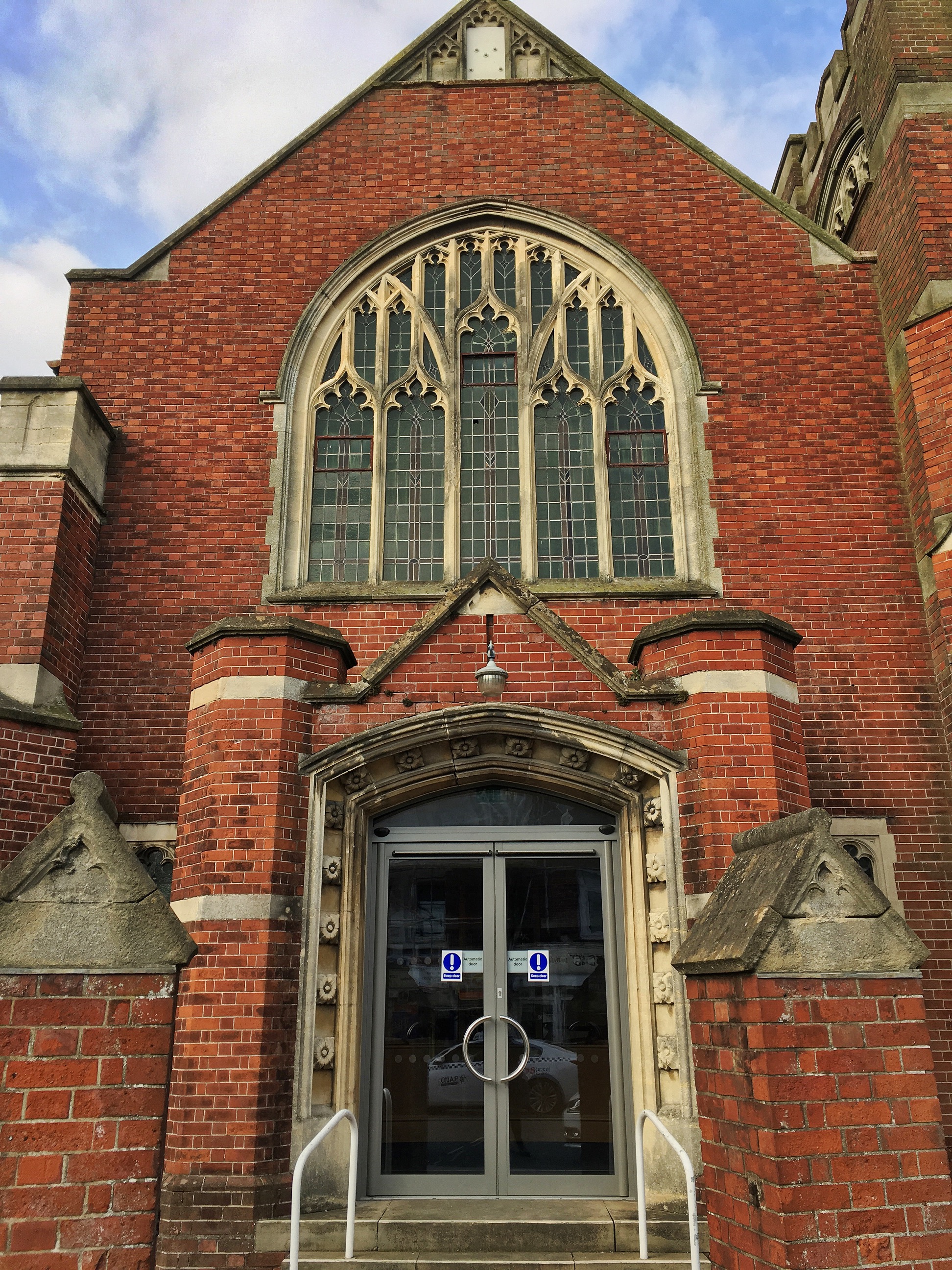 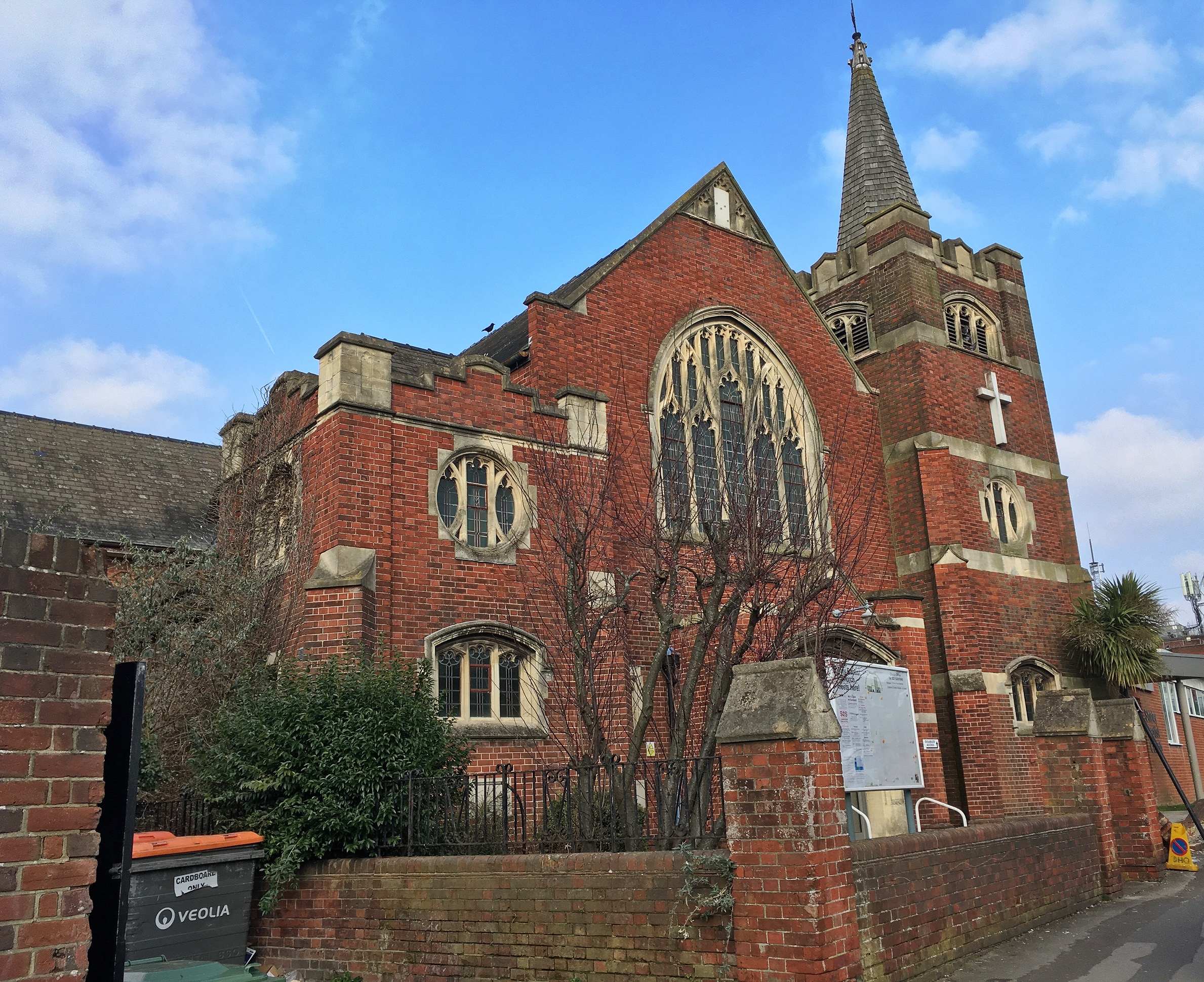 When we finally reached the top of Church Street we turned right, even though the church we had come to see was to our left. For once this was not down to me taking a wrong turning though. The reasons for the right turn were twofold. For one there was a Costa directly to our right and we both felt in need of a coffee after our chilly walk. Secondly there was an interesting drinking fountain in the shopping precinct a little further on. We decided to have our coffee after we’d found the fountain.

As it happened, the Jubilee Memorial Drinking Fountain wasn’t hard to find but, from a photographic point of view it was fairly obvious we’d come on the wrong day. Today was obviously market day and the little precinct was filled to overflowing with people and stalls. The fountain itself was propping up some of the electrical wires for the latter. 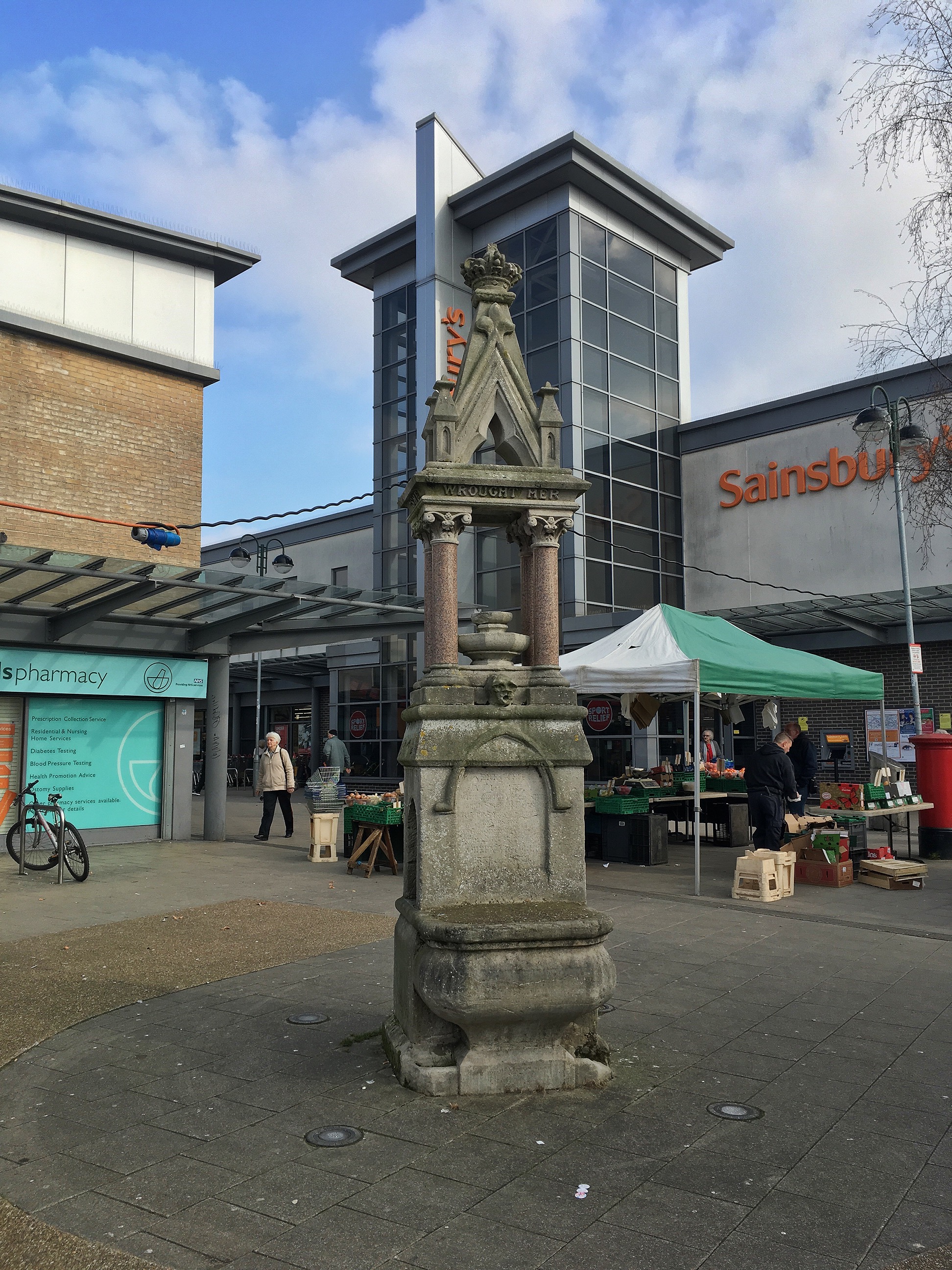 The idea for the drinking fountain came about as a result of fundraising for  Queen Victoria’s Godlen Jubilee celebrations in 1887, the same year my grandfather was born. The people of Shirley raised far more money than they needed and had to find something to do with it. Eventually someone came up with the idea of a drinking fountain. All agreed it was a fine idea, what they couldn’t agree on was where to put it. There was a long and bitter argument over which side of Shirley Hight Street to erect the fountain. Petitions were raised and angry debate raged for almost two years. Finally, in April 1889, the fountain was placed on the west side of the high street near the Salisbury Arms. 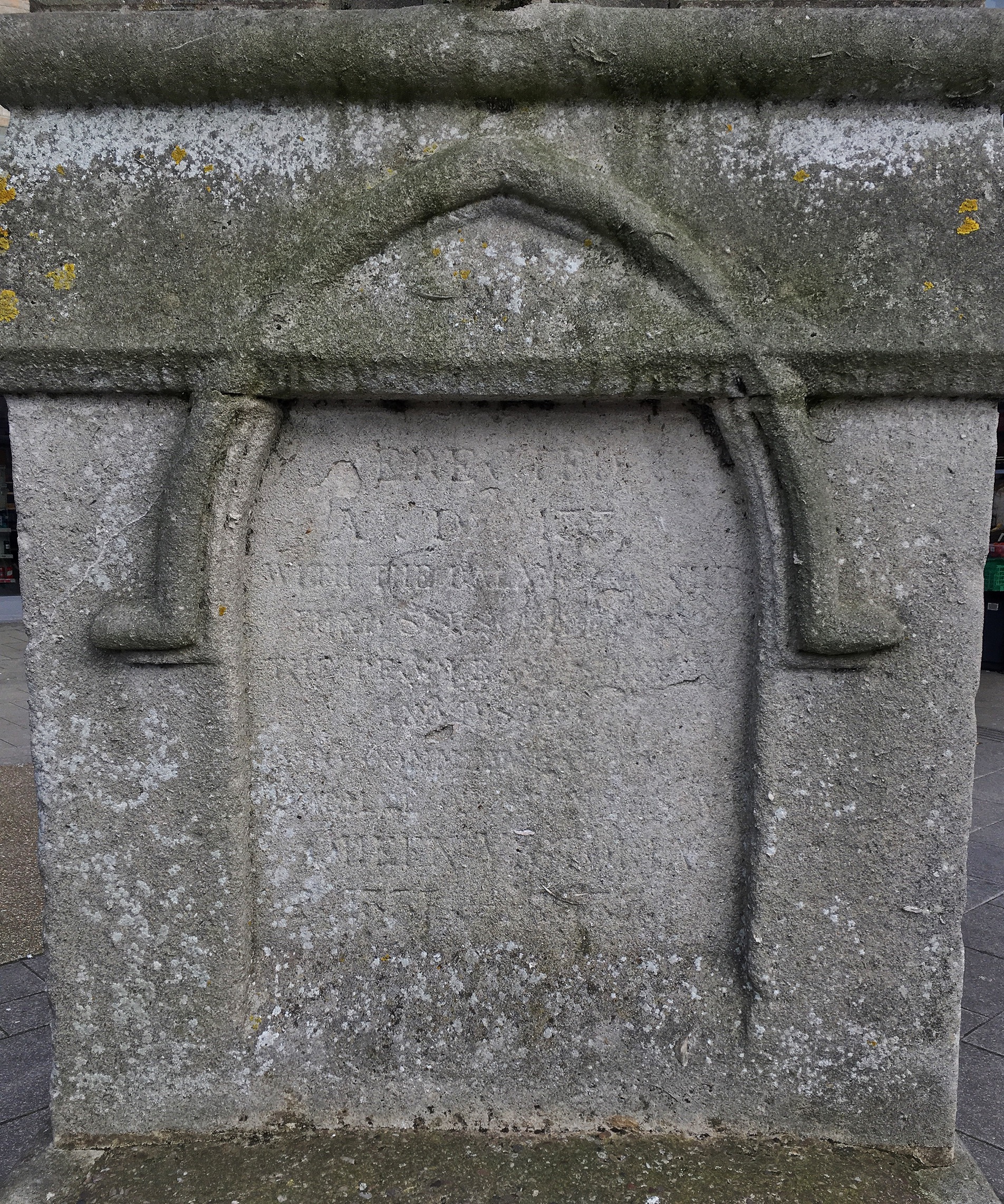 The gothic style, rectangular fountain had a trough for dogs and a basin for horses and cattle. For the people of Shirley there was a push valve to send water gushing from a lions head into a basin. The lions head and the basin survive, although the water no longer flows and the basin is filled with litter. The inscriptions on the sides of the Portland stone pedestal have faded and the decorative fountain in the centre no longer works but the granite columns are still in good condition, as is the spire topped by a crown to represent the queen. 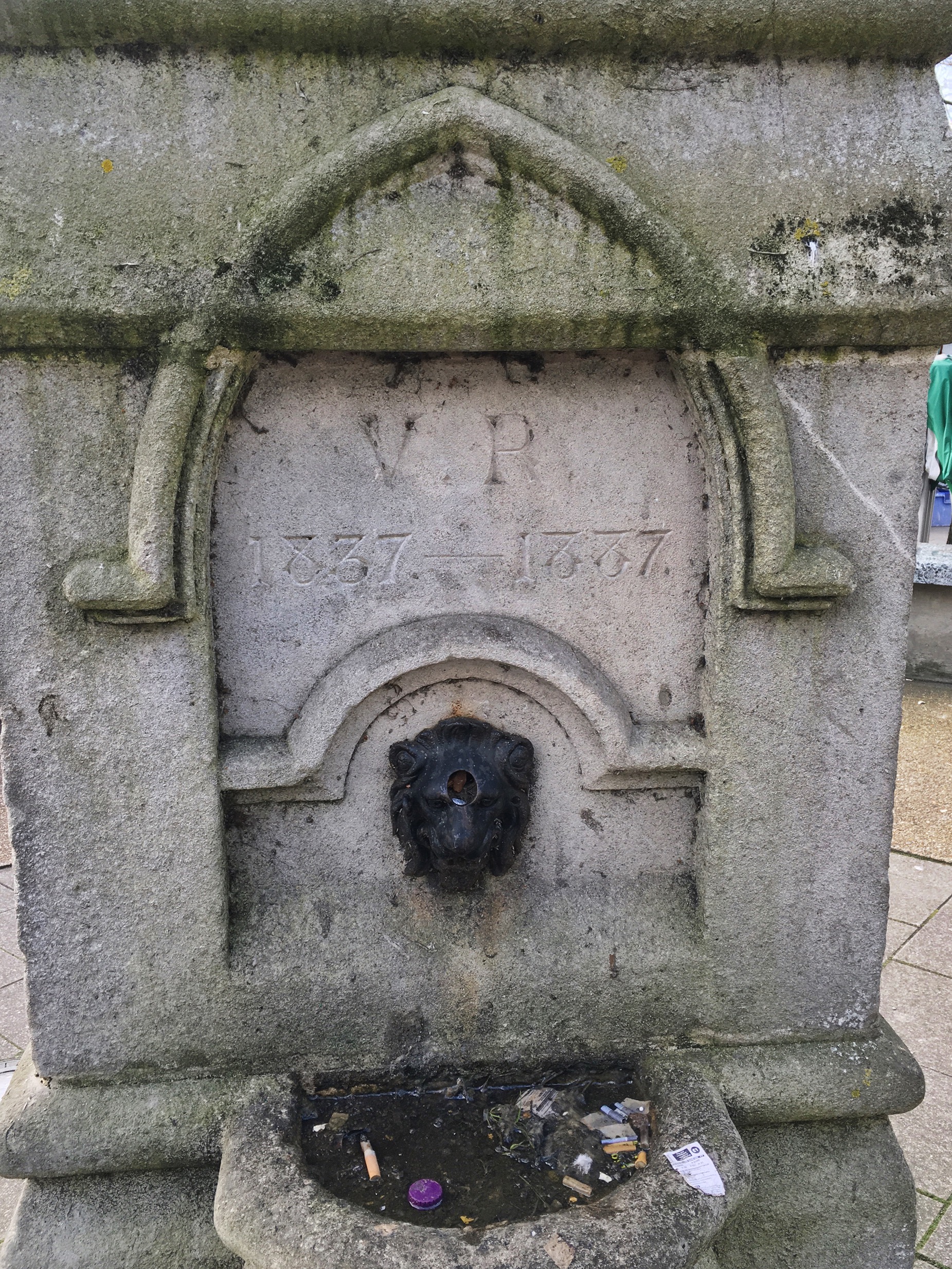 Unfortunately, the arguments over where the fountain should be sited didn’t end with its installation. In 1911 the tram line was extended and the fountain was in the way. It had to be moved. Unsurprisingly, no one could agree where it should go. The debate about repositioning it was as bitter as it had been about its original placement, with the added argument over who should pay for it. Agreement wasn’t reached until 1923 when the fountain was moved to the east side of the High Street on the corner of Romsey Road. 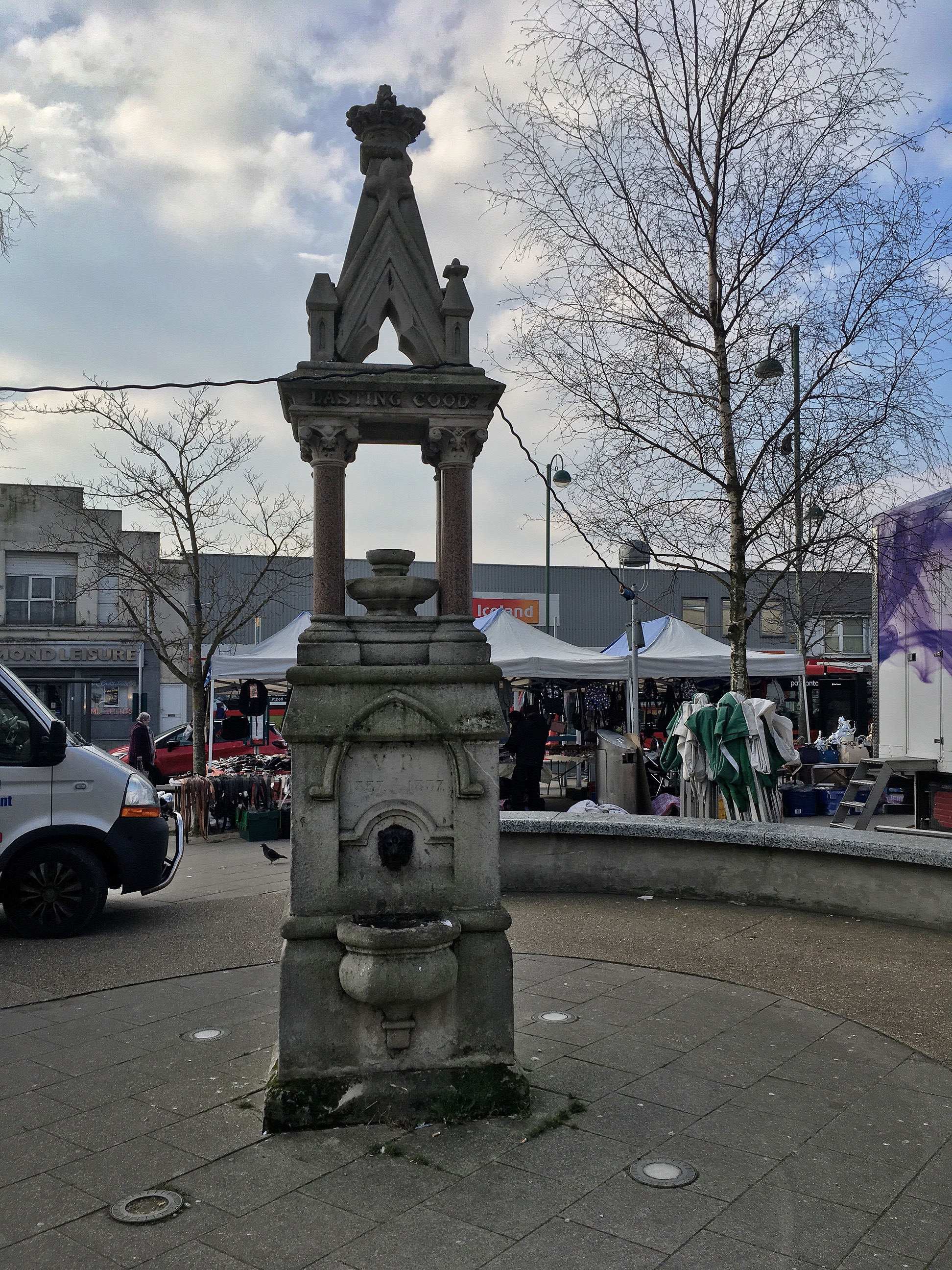 This did not turn out to be the final move for the fountain. By the early 1970’s the trams that had caused the last move were long gone but motor traffic in Shirley was getting more and more congested. On several occasions the poor fountain was hit by cars and it was obvious it needed to be moved again. This time there weren’t too many arguments. The damage from the accidents was repaired and the fountain was quietly moved to the shopping precinct where it now stands.

For a fountain that had been so surrounded by controversy it seems to have been largely forgotten today. As I walked back and forth doing my best to take photographs of it, shoppers were passing by without so much as a glance. Even we didn’t stay too long, we had a church to visit if we were lucky and it was open and the cold and the lure of the coffee was too much for us so we headed back towards Costa. 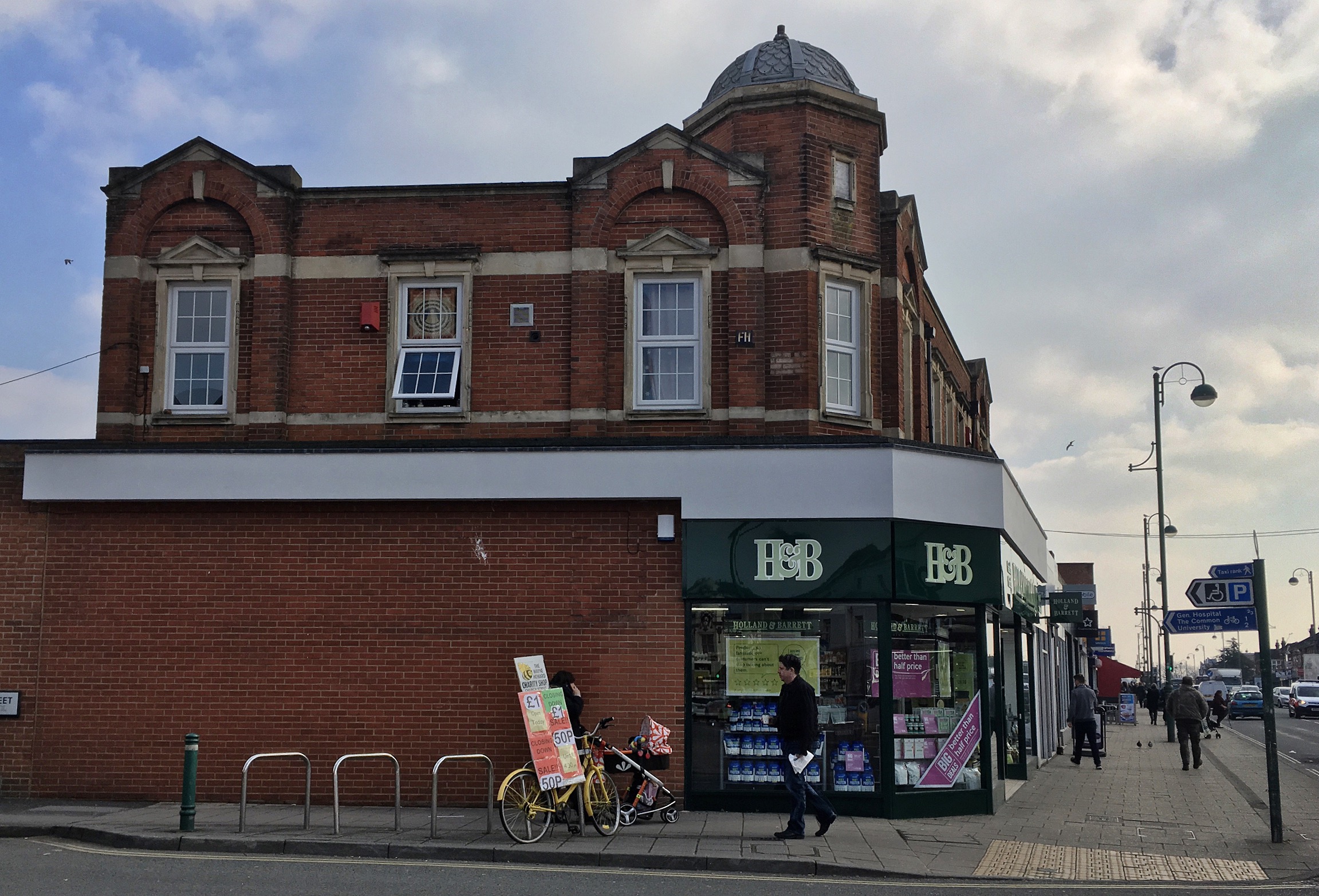 2 thoughts on “West Side wanderings”