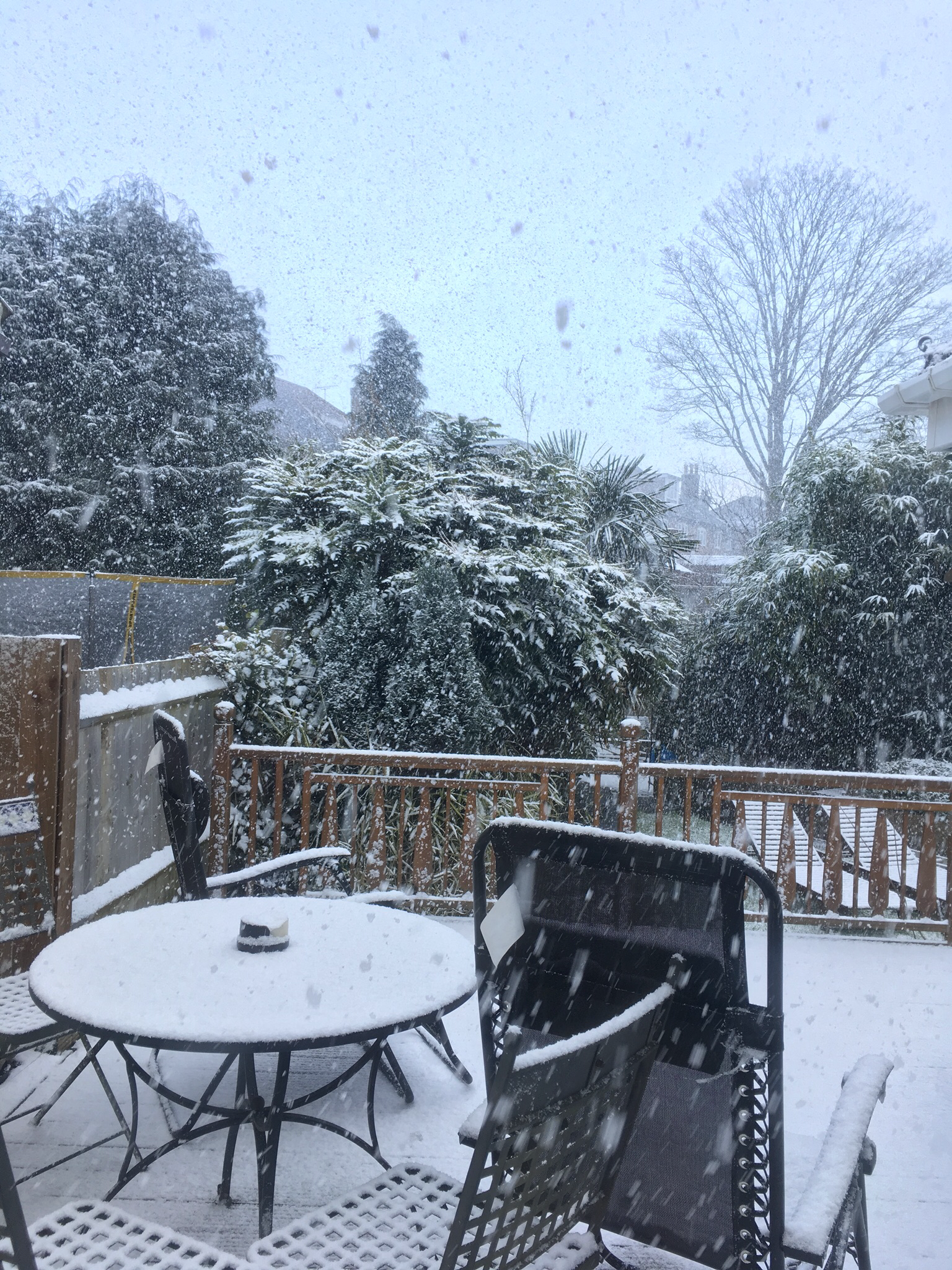 Just when it felt like spring was yawning, stretching and preparing to throw off the winter covers, the weatherman said a big snow storm was blowing in from Russia. I frantically searched the house for my yaktrax and thought about where I could go walking in it. Ok, maybe I have issues, but we don’t get snow very often here on the south coast. My inner cyclic said it would probably come to nothing. The Met Office are fond of making snow mountains out of a few flakes.

On Tuesday afternoon it seemed the weatherman was right. The sky got dark and the snow fell in earnest. I sat with my face pressed against the French window watching the flakes swirl around my garden. In a few moments the decking was covered. Then, just as quickly as it started, it stopped. In no time at all the snow had melted away as if it was never there. I hadn’t even had the chance to put my yaktrax on never mind go outside in it. By Wednesday normal service was resumed and, if it hadn’t been for a couple of photos on my phone, I’d have thought I dreamed the snow.

As it happened, we hadn’t seen the last of the beast from the east. More snow fell overnight on Wednesday and, today, I woke to a thin blanket of white covering my garden. It wasn’t deep and I doubted it would last long but CJ and I wrapped up in our warm things and went out to make the most of it while it was there. We hoped we’d be able to get into town and see the parks and the old walls before it melted.

It wasn’t the deepest snow, barely enough to cover the grass and certainly not enough to build a snowman, but there was a thin, sparkly coating on the pavements, just enough to justify the yaktrax. We marched off towards town with our fingertips and noses tingling and all the joy of two naughty schoolchildren skipping school. 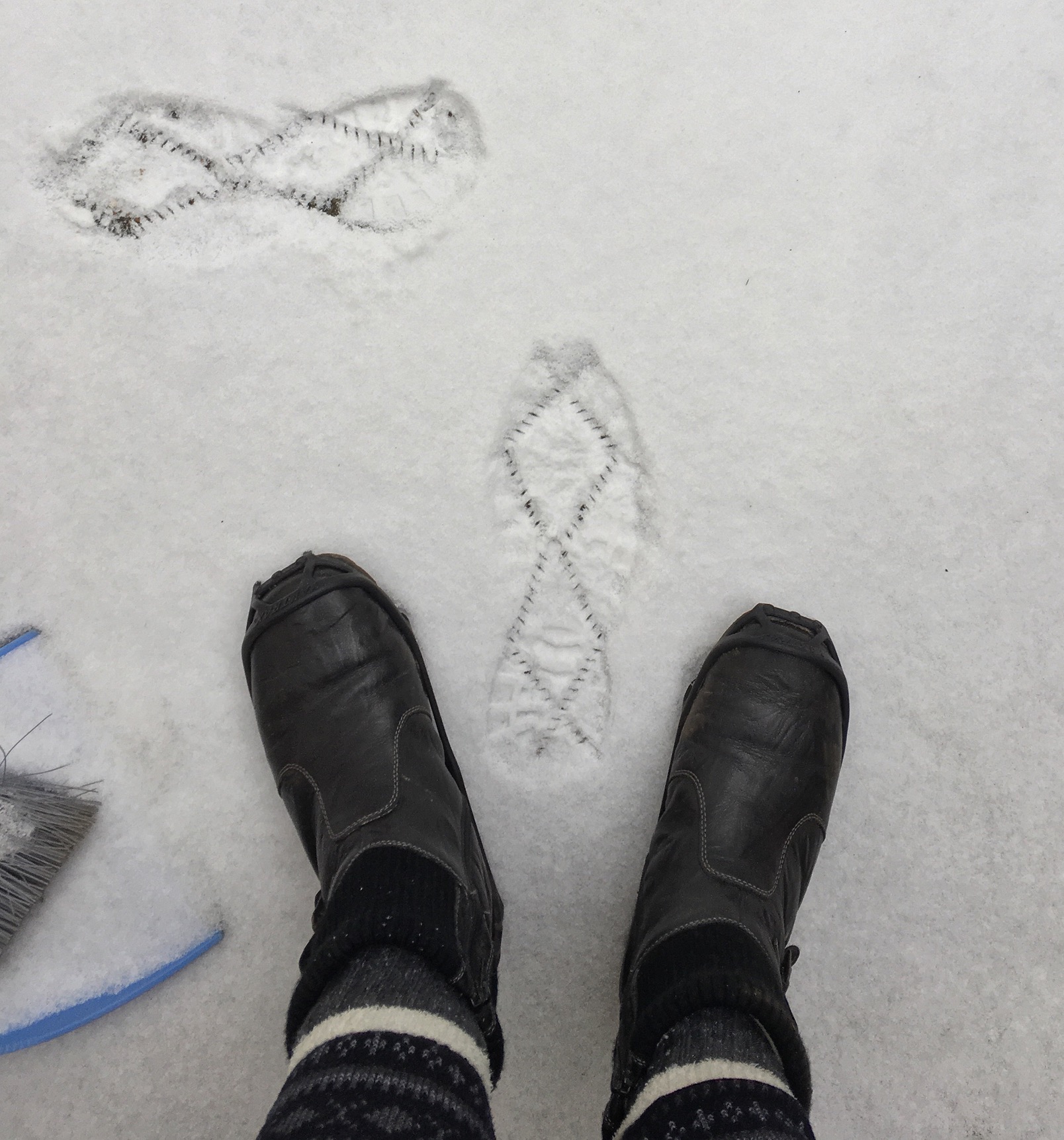 The real children were out in force. All the local schools were closed and they were enjoying their snow day with home made sledges and snowball fights. Walking along the river path little flakes of snow fluttered all around us. For a moment or two we thought it was snowing again. Then we realised it was just flakes being blown off the tree branches by the icy wind.

It may not ha e been snowing but it was bitterly cold down by the river. The chill nipped at every bit of exposed flesh and even the skeleton ship had a light dusting of snow on its rotting boards. We put our heads down and marched across the bridge as quickly as we could, consoling ourselves that we were warmer than the pair of poor swans swimming forlornly on the river.

It was a relief when we reached the shelter of the buildings of Princes Street, although the speed of some of the cars passing us was a little unnerving. The main roads had been gritted but there were patches of ice here and there and the pavements were still covered with patchy snow and icy puddles.

We stopped on the corner of Elm Street to snap a quick photo of American Wharf with a light coating of snow. The oldest part of the building is a steam mill and bake house built by Aaron Moody and Christopher Potter to make biscuits for the Royal Navy during the American War of Independence. During the Napoleonic Wars in first decade of the nineteenth century it was extended to the north and west to add another bake house and a grain store. Since 2011, there have been plans to restore the site and turn it into offices and apartments but, so far, all that seems to have happened is the boarding up of the windows. 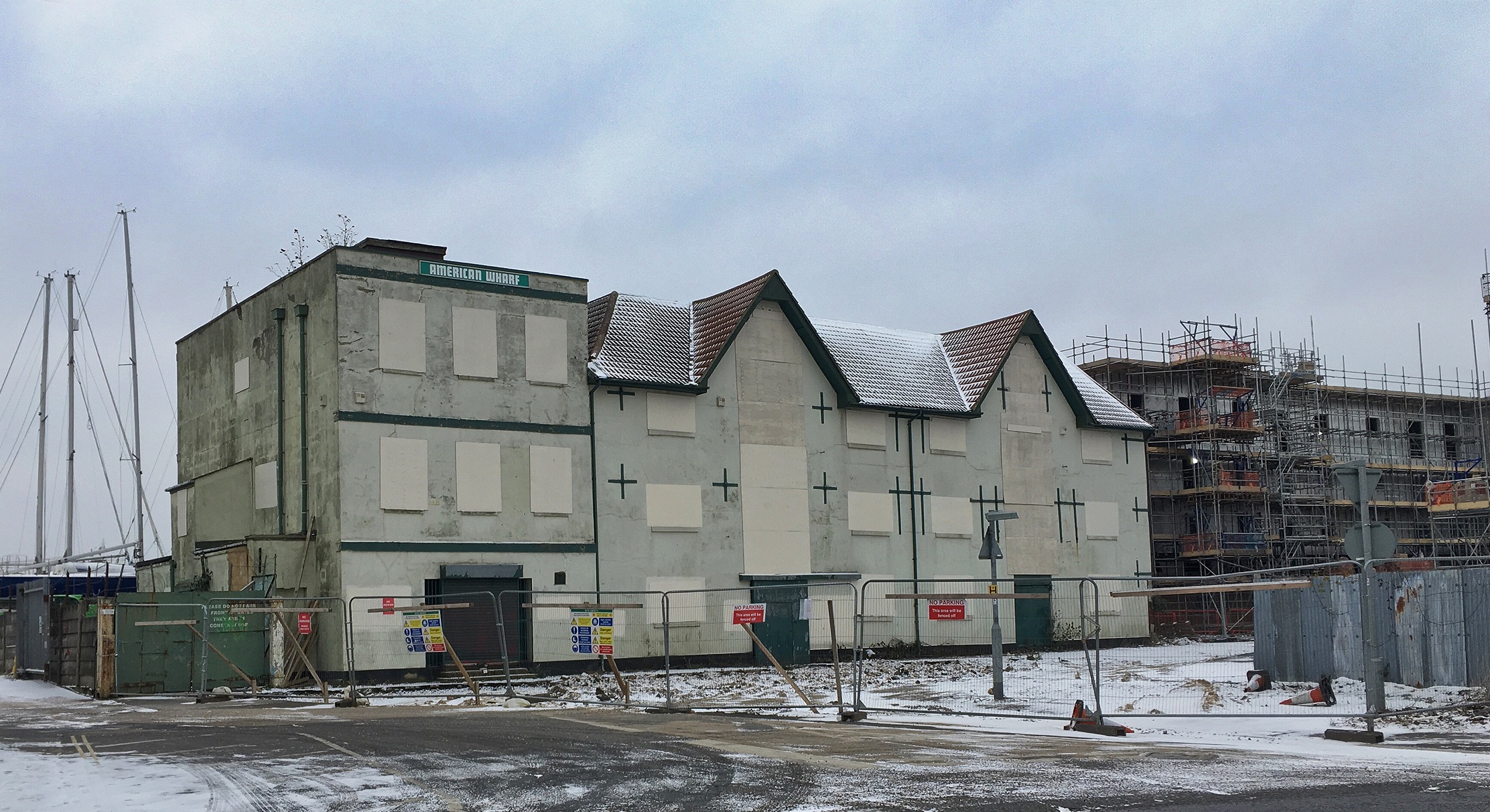 As we passed St Mary’s Stadium a few real flakes began to fall around us, giving us hope that we might get to the centre of the city before everything melted. We marched on towards the church where Southampton Football Club began as a church football team back in 1885, hoping find the mother church of Southampton covered with snow. 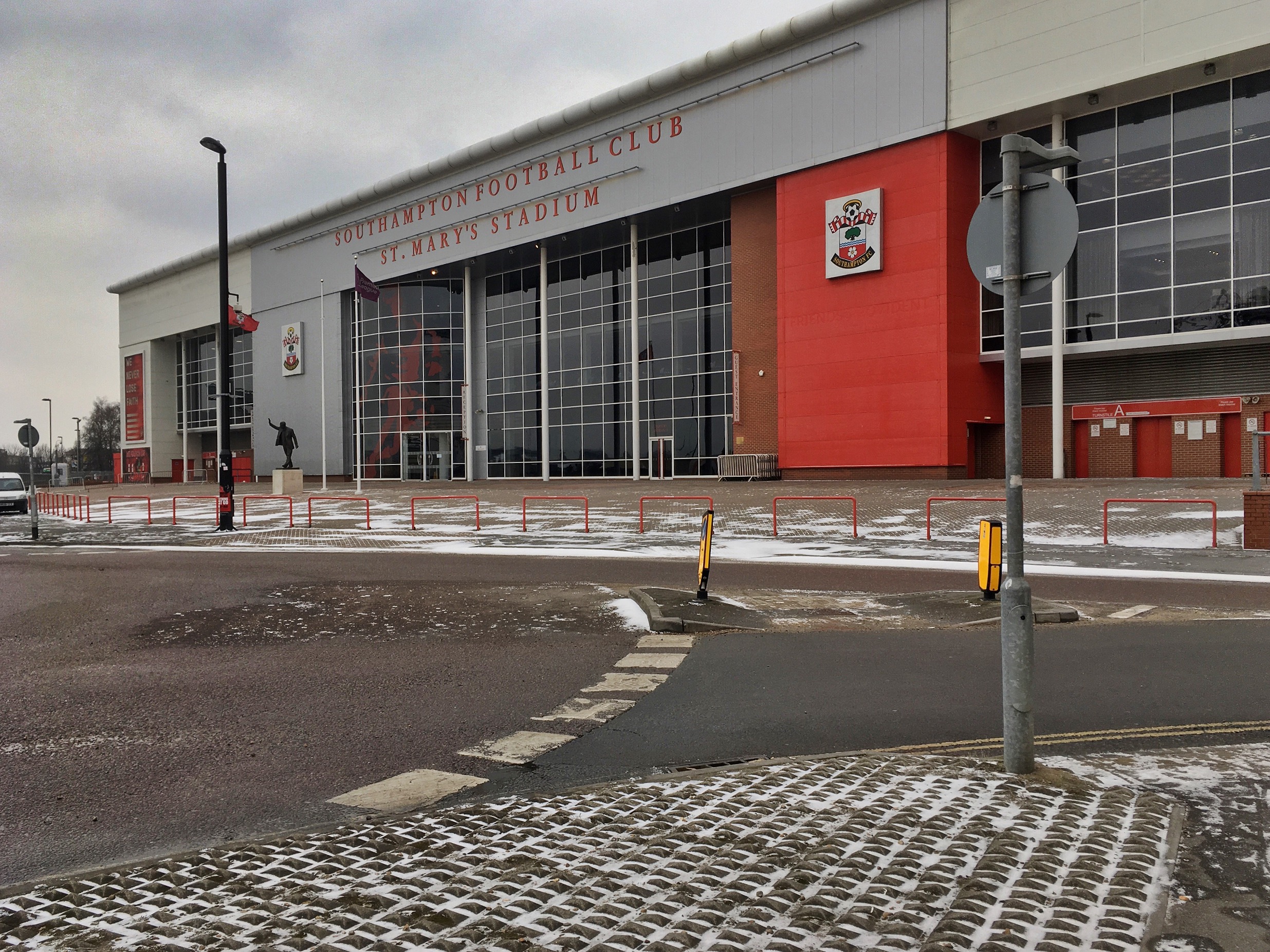 There has been a church on this spot since the first Saxon settlement in the seventh century so I suppose it has seen its share of snow. Disappointingly, today there was barely enough on the ground to hide the green of the grass and just the merest hint had settled on the church roof. The paths through the church grounds were lightly dusted and little drifts had been blown against the side of the building. The snowflakes were getting fatter and more frequent as we left the church and headed towards the parks.

Those fat flakes were blown into our faces by the wind howling along Harrison’s Cut. Once there was a large house and garden beside this cutway. It took up the whole corner of the street and belonged to John Butler Harrison, one of the town’s leading men. Harrison was a burgess, bailiff, sheriff, collector of customs and one of the first harbour commissioners. In 1794 and 1811 he was mayor. His wife Elizabeth Matilda Austen of Chawton, was related to Jane Austen. When Harrison died, in 1850, his property was sold and became the workhouse school. The workhouse guardians tried to get the cutway closed to the public but failed. These days the passageway is surrounded by  student halls and it is usually filled with students. Today CJ and I had it all to ourselves.

The students may have all been enjoying a snow day but the parks were far from empty. With the snow swirling all around us, we walked through Hoglands Park. The bare trees and the icy ground made it feel like midwinter rather than March and it was hard to believe we were in these parks just over a week ago in bright sunshine looking for spring flowers.

As the name suggests, Hoglands Park probably began life as a pasture used for pigs. In medieval times it was arable land, divided into acre strips and farmed. The land was turned into a public sports field in the mid 1800’s. Unsurprisingly, the cricket pitches and skatepark were empty today but the pavilion, painted by local street artists was a bright spot amid all the white. Sadly the paint of the murals is peeling these days.

Getting across the road to Palmerston Park wasn’t as easy as expected. There is a zebra crossing on either side of the crossroads. Luckily we didn’t take it for granted that cars would stop. As we stood waiting a car skidded across both crossings on the icy road. Thankfully the person waiting at the other crossing was as wary as us and no one was hurt.

As we walked along the sparkling paths and passed the bandstand, topped with a thin layer of snow CJ was all for going to the nearest coffee shop to get warm while I was torn between wanting to explore the snowy parks and wanting to see the snow on the medieval walls. Even with the snow falling there was no guarantee how long it would last and, going on past experience, it might be gone before we had the chance to see both.