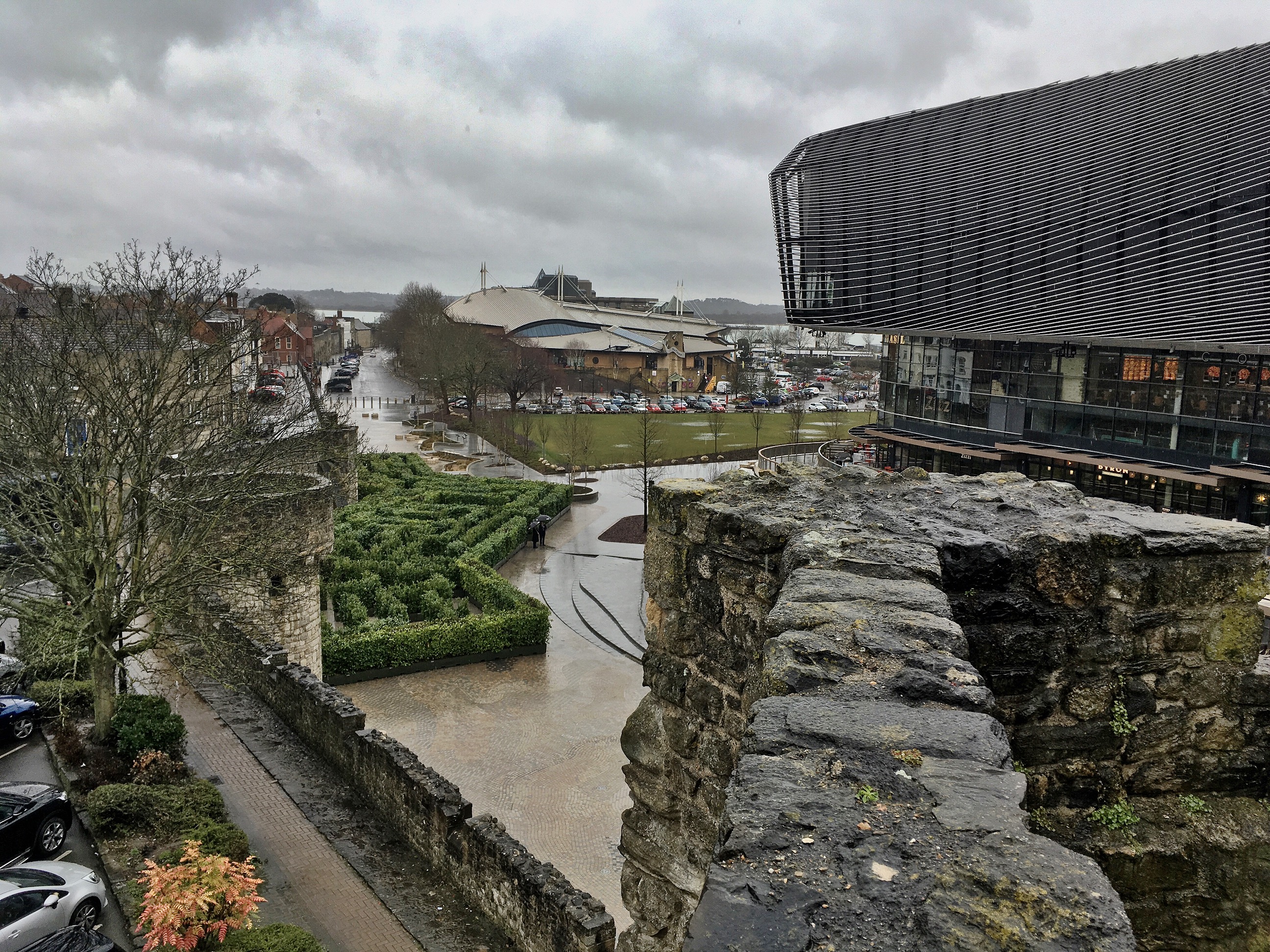 After the snow came the rain. It seemed as if the sky was constantly dropping something on us. Everything was wet. Everything was muddy. Walking was a chore, to be got over with as soon as possible with the least amount of getting wet. Easter was fast approaching but nothing felt very springlike. Miles were travelled as I went about my daily business but my phone stayed firmly in my pocket and my camera stayed at home. Then I read about something I couldn’t bear to miss, rain or no rain.

Given my propensity for getting lost, walking through a nine thousand square foot maze made from a  two and a half metre high laurel hedge may not have been the best of plans. When that maze was beneath the medieval town walls in the new Watermark Plaza though  how could I resist? The maze was the latest in a series of temporary attractions in the plaza and, even with the distinct possibility of getting lost, it was one I didn’t want to miss.

Of course, it was raining. It has been raining almost continually since the snow melted. Getting hopelessly lost in a maze in the rain didn’t exactly sound like fun but, if  CJ and I waited for a sunny day, there was a good chance the maze would have been dismantled and we’d have missed it. Besides, I had things to do in town so I figured I might as well at least have a look at it while I was there. 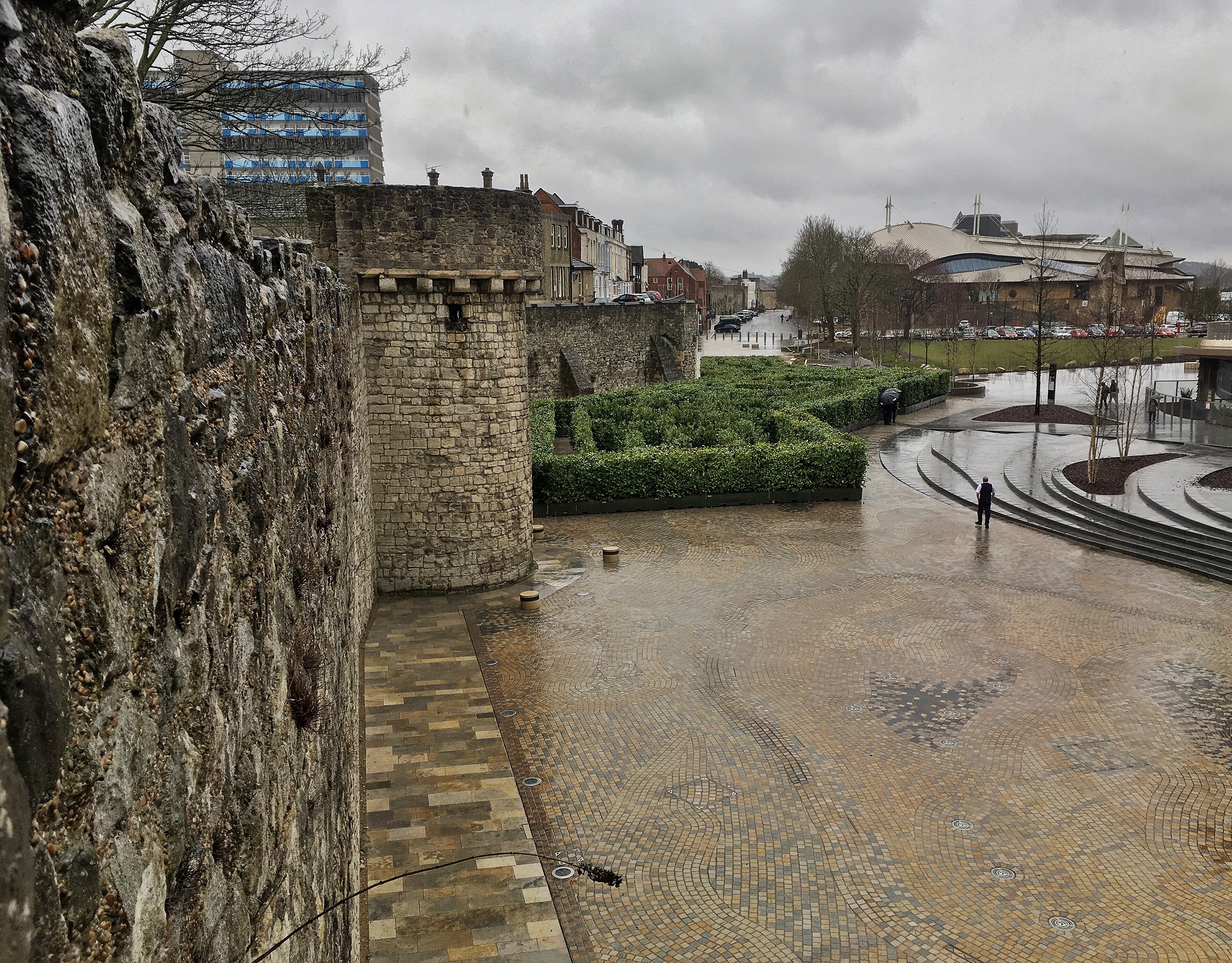 We got our first glimpse of the laurel hedge from the battlements between Arundel and Catchcold towers. From above it didn’t look too big and scary but it did seem strange to see so much greenery below the old walls. It was also completely empty, probably because of the weather. 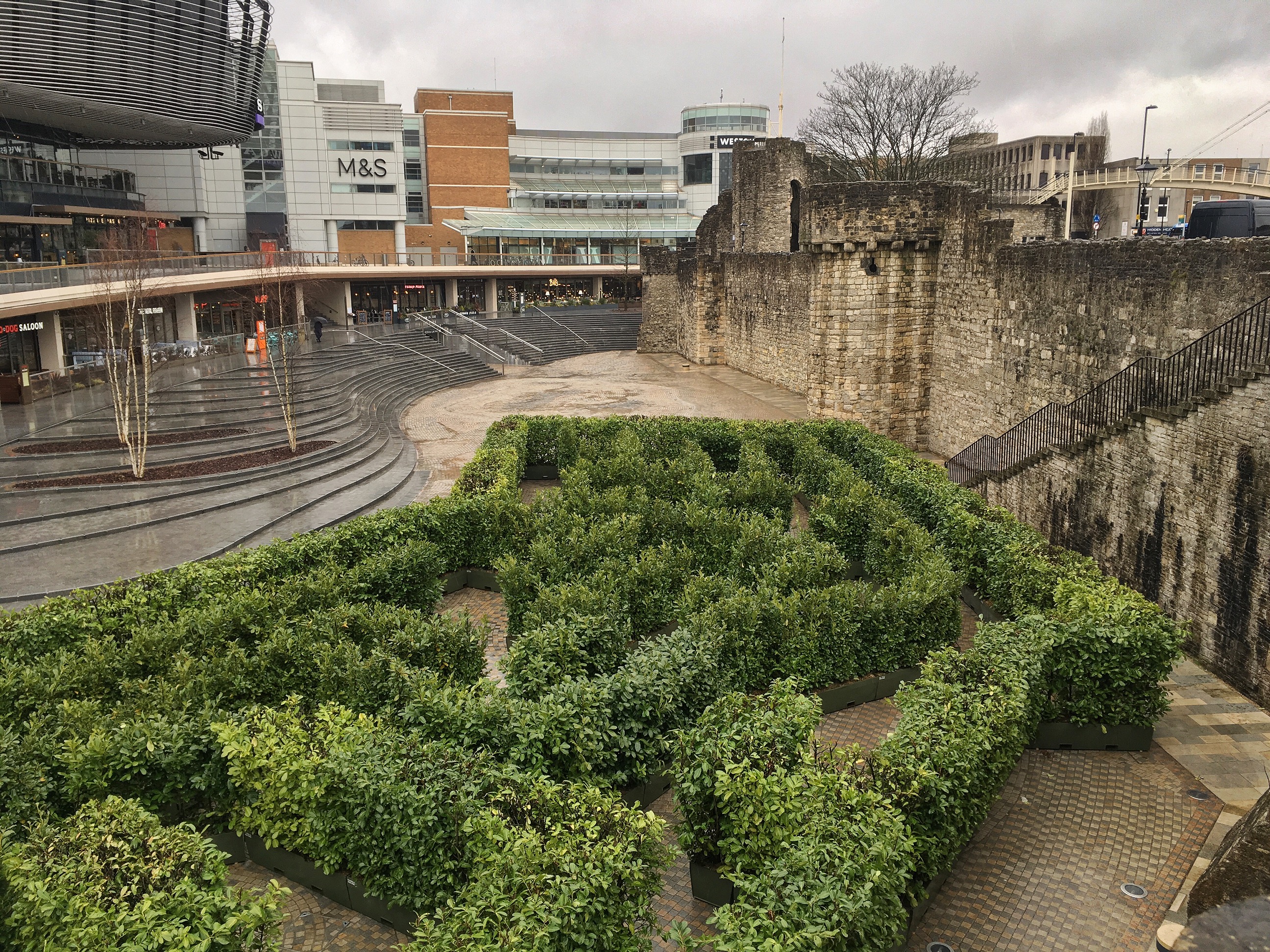 At this stage I was still not sure entering the maze was a good idea but CJ said he knew how mazes worked and was positive he’d easily be able to crack this one.
“I guess, if we can’t find our way out, someone will notice we are missing eventually and send a search party,” I said.
We spent quite some time peering over the wall familiarising ourselves with the layout. At least, with the rain pouring down, there would be no one to witness us making fools of ourselves. 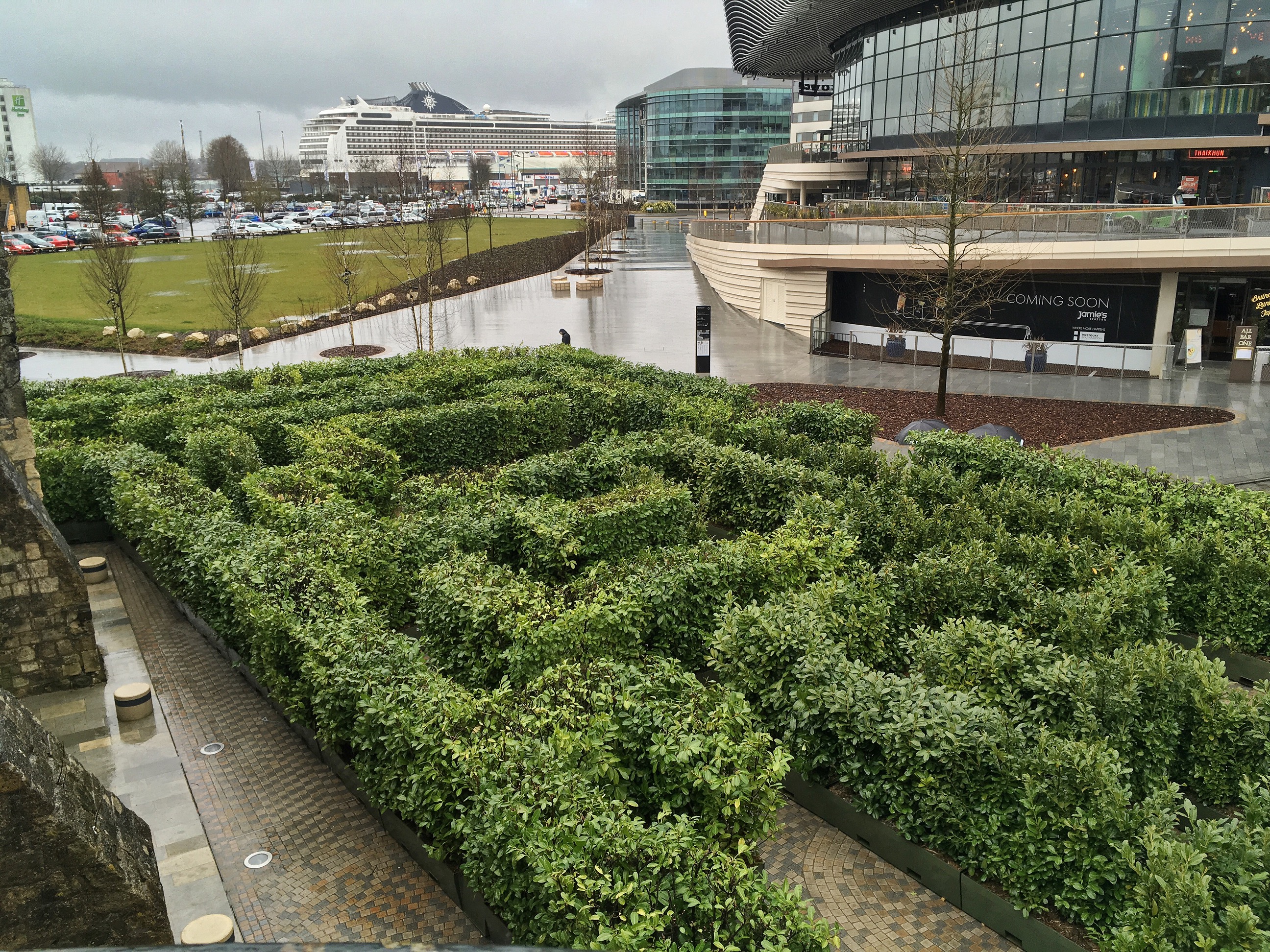 At the bottom of the forty steps the hedge looked far taller than it had from above. CJ, who’d been convinced he’d be able to see over it, suddenly he got a lot less smug. From here we couldn’t even see where the entrance was. We weren’t even inside yet and we were already lost. 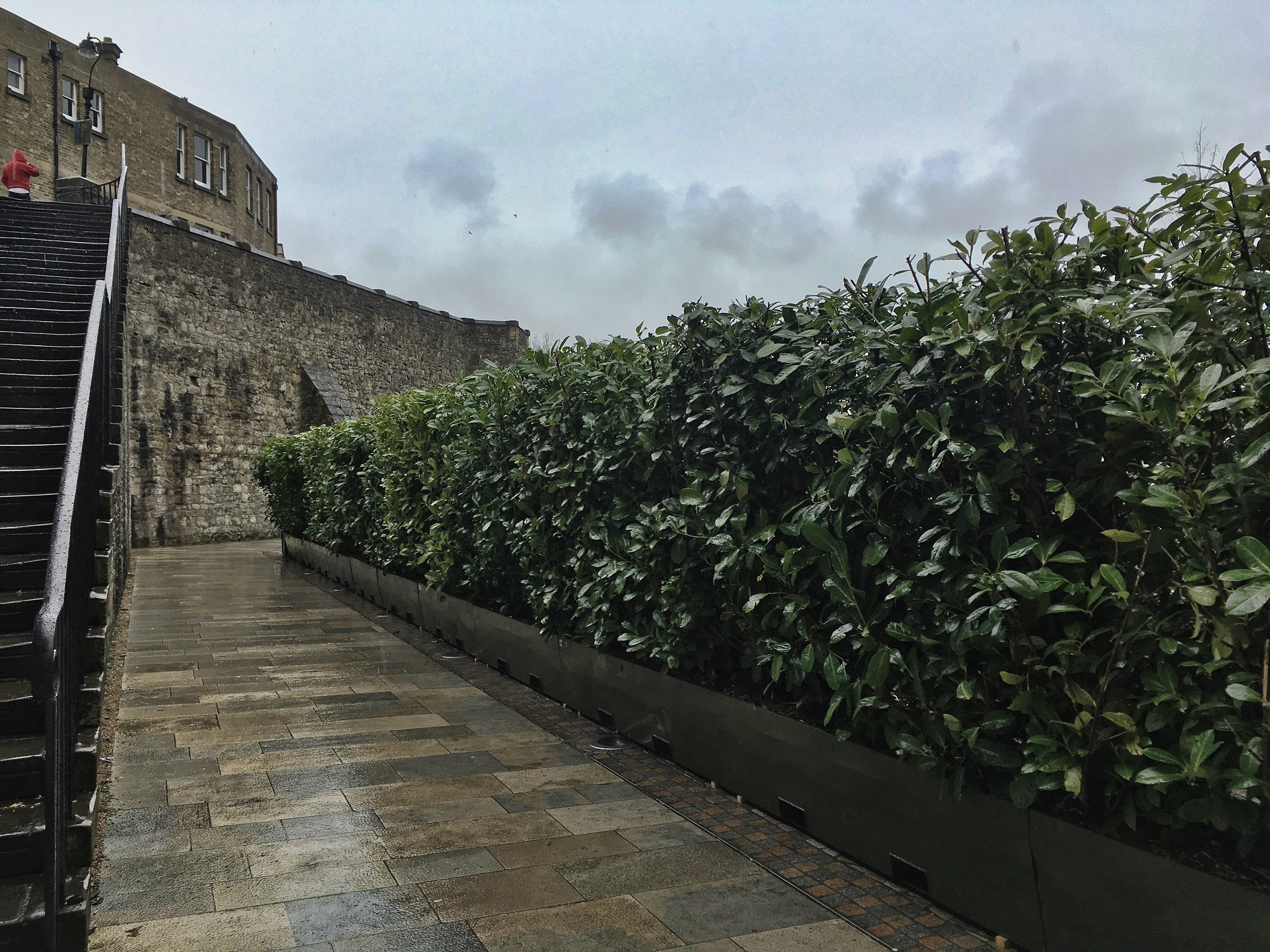 After a certain amount of humming and hahing, we headed right, along the line of the hedge until we reached the corner nearest to Arundel Tower. It wasn’t until we rounded the next corner that we saw the entrance, complete with a rather wet looking, umbrella toting, attendant. He clicked a counter twice as we entered the maze. This was reassuring. At least someone would know how many people went in and, presumably, how many came back out again. 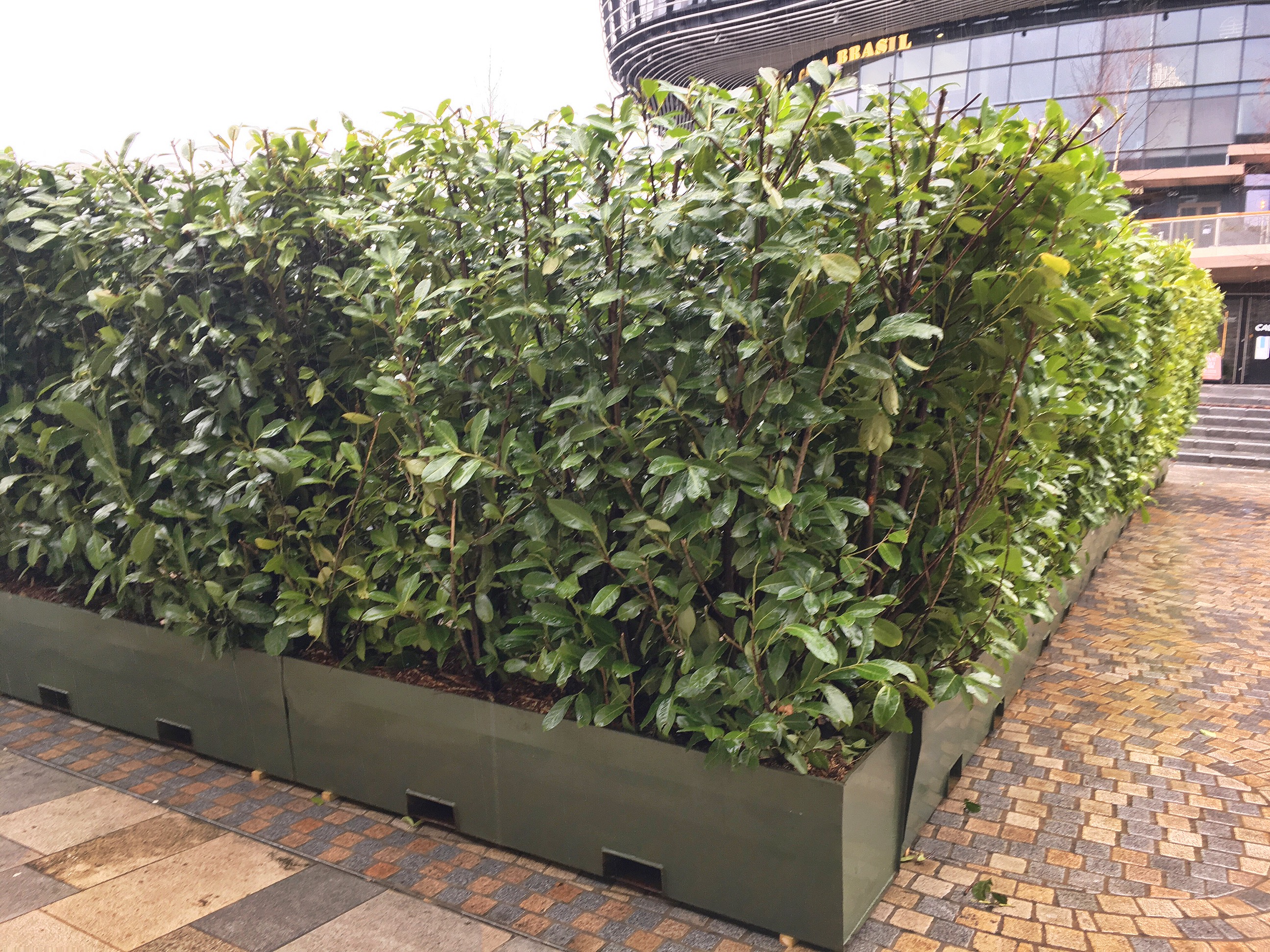 Inside, things were not quite as claustrophobic as I’d feared when I’d been looking down from the battlements. The hedges were tall but the paths were wider than they’d looked and the medieval walls loomed above us, giving a sense of direction.
“The trick is to follow the right hand wall,” CJ said as we set off. 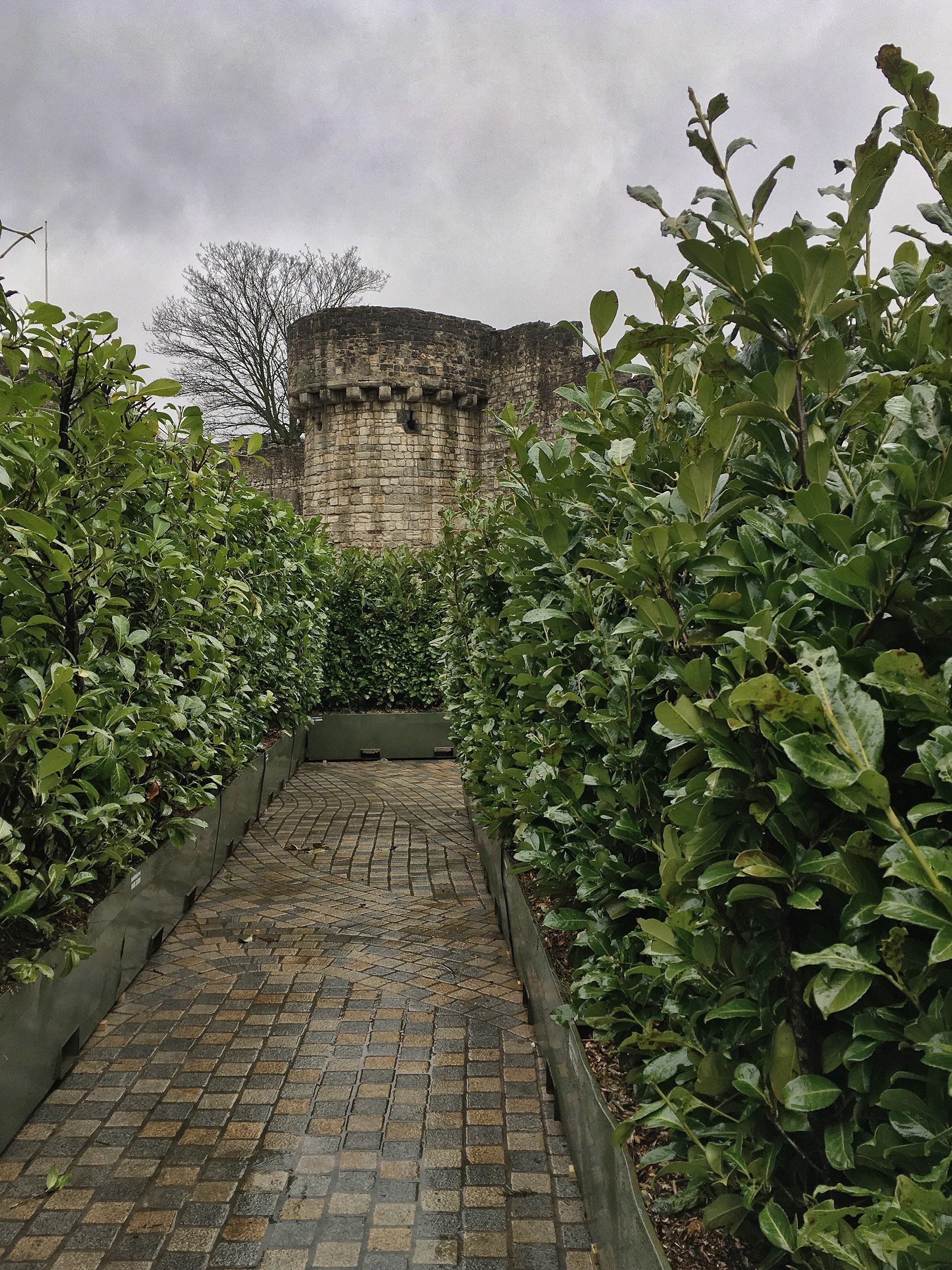 While I wasn’t entirely convinced CJ’s method would work, I didn’t have any better plans so I let him lead and enjoyed the strange views of the walls rather than worrying about getting out again. A few twists and turns later and we were looking along Western Esplanade towards the sea, or we would have been if we could have seen through the hedge. 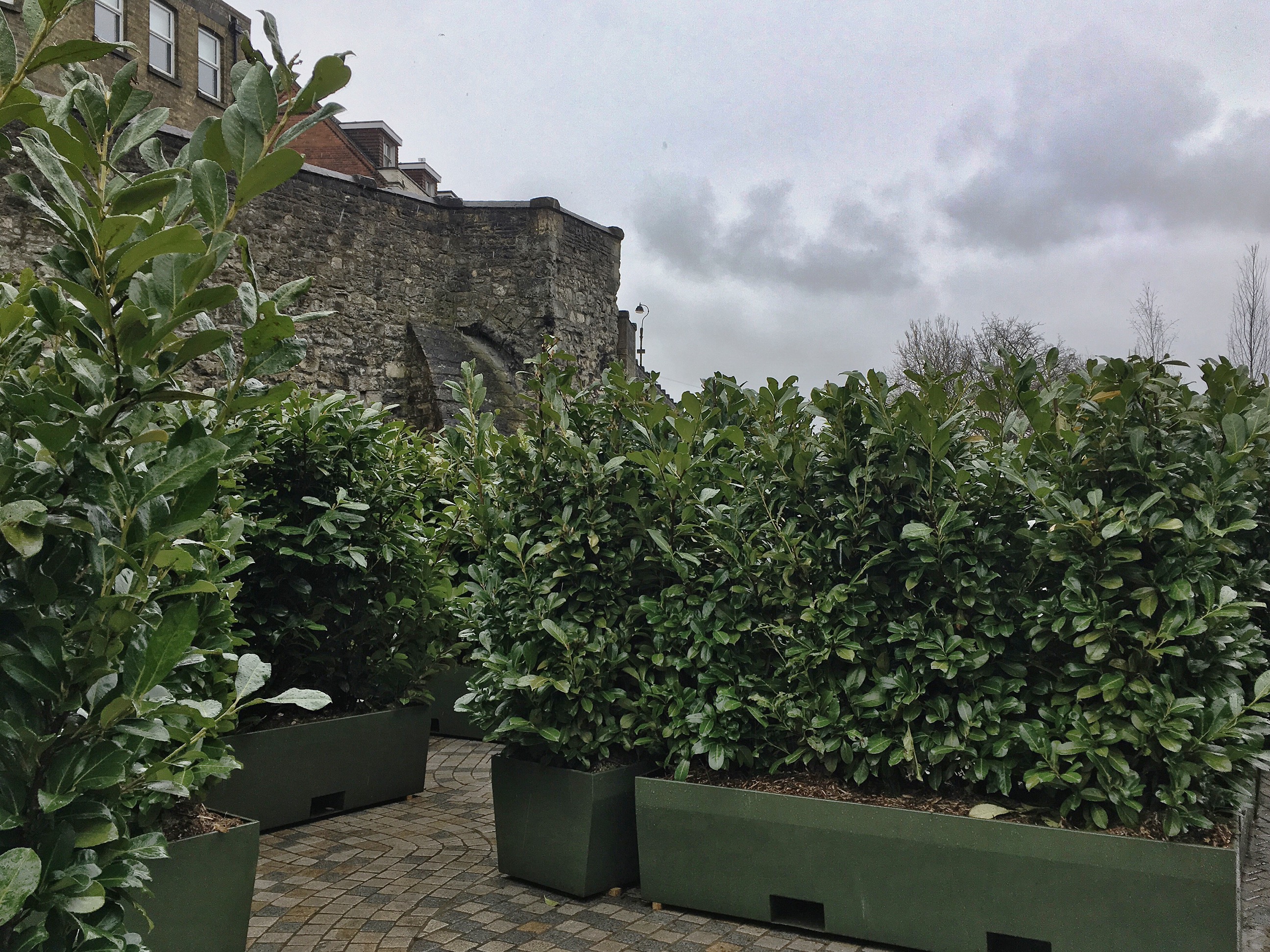 Round and round we went. The forty steps and Catchcold Tower reappeared above the hedge. Then we were walking towards the Watermark building for a while before another turn or two took us back in the direction of the sea. CJ may have been convinced he knew what he was doing but I wasn’t so sure. In fact I began to wonder if I should have brought some breadcrumbs to drop or maybe a very large ball of yarn. 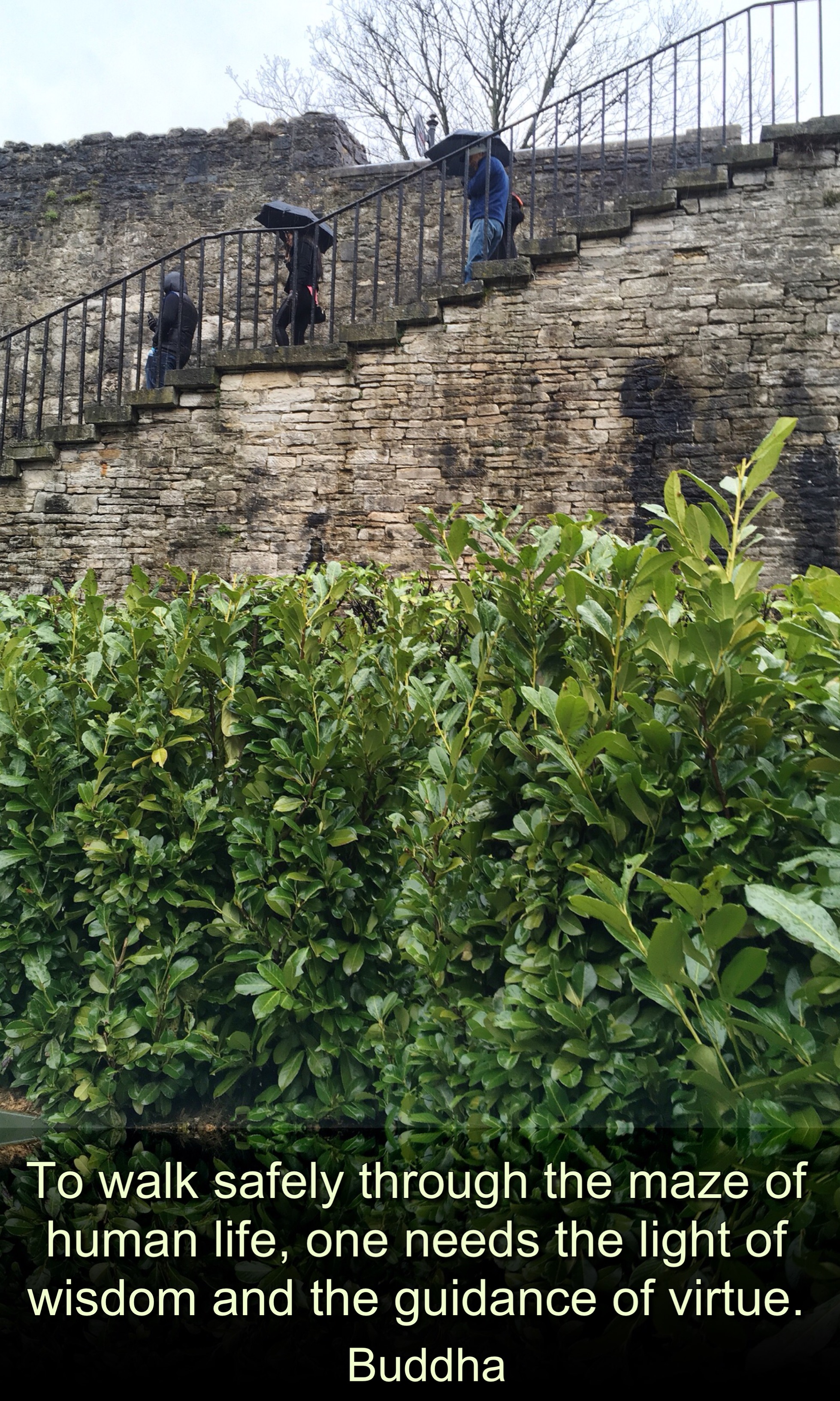 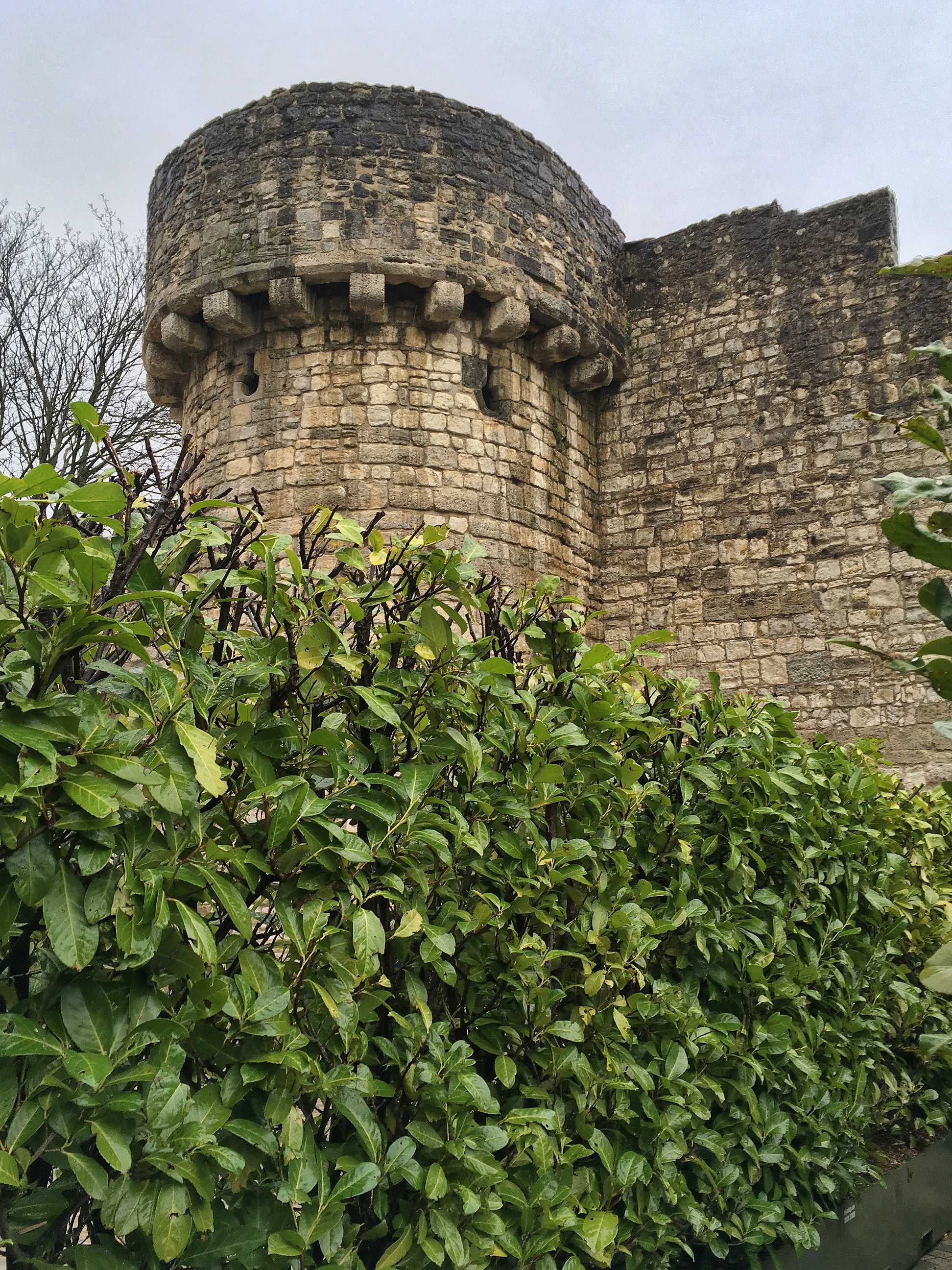 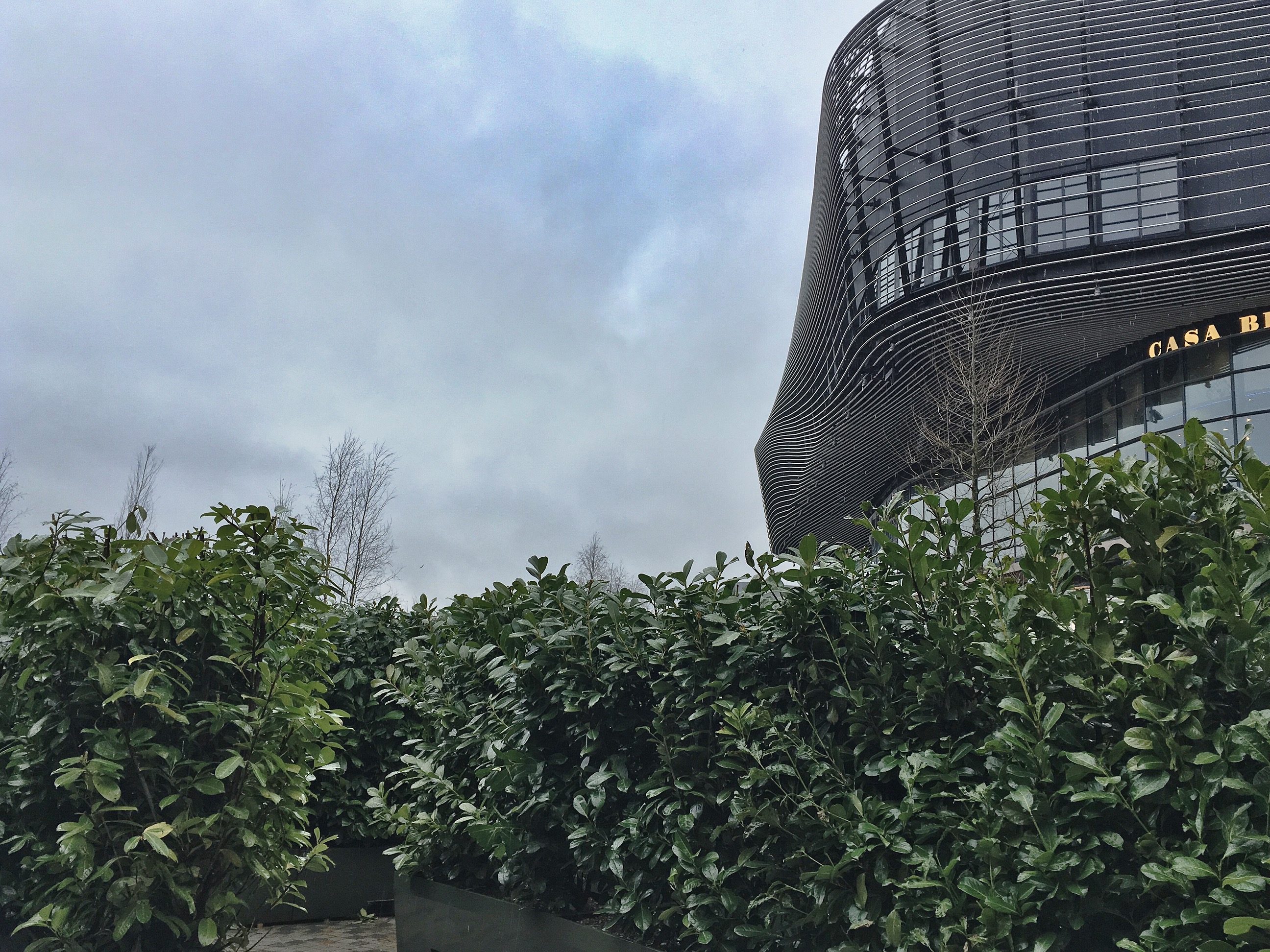 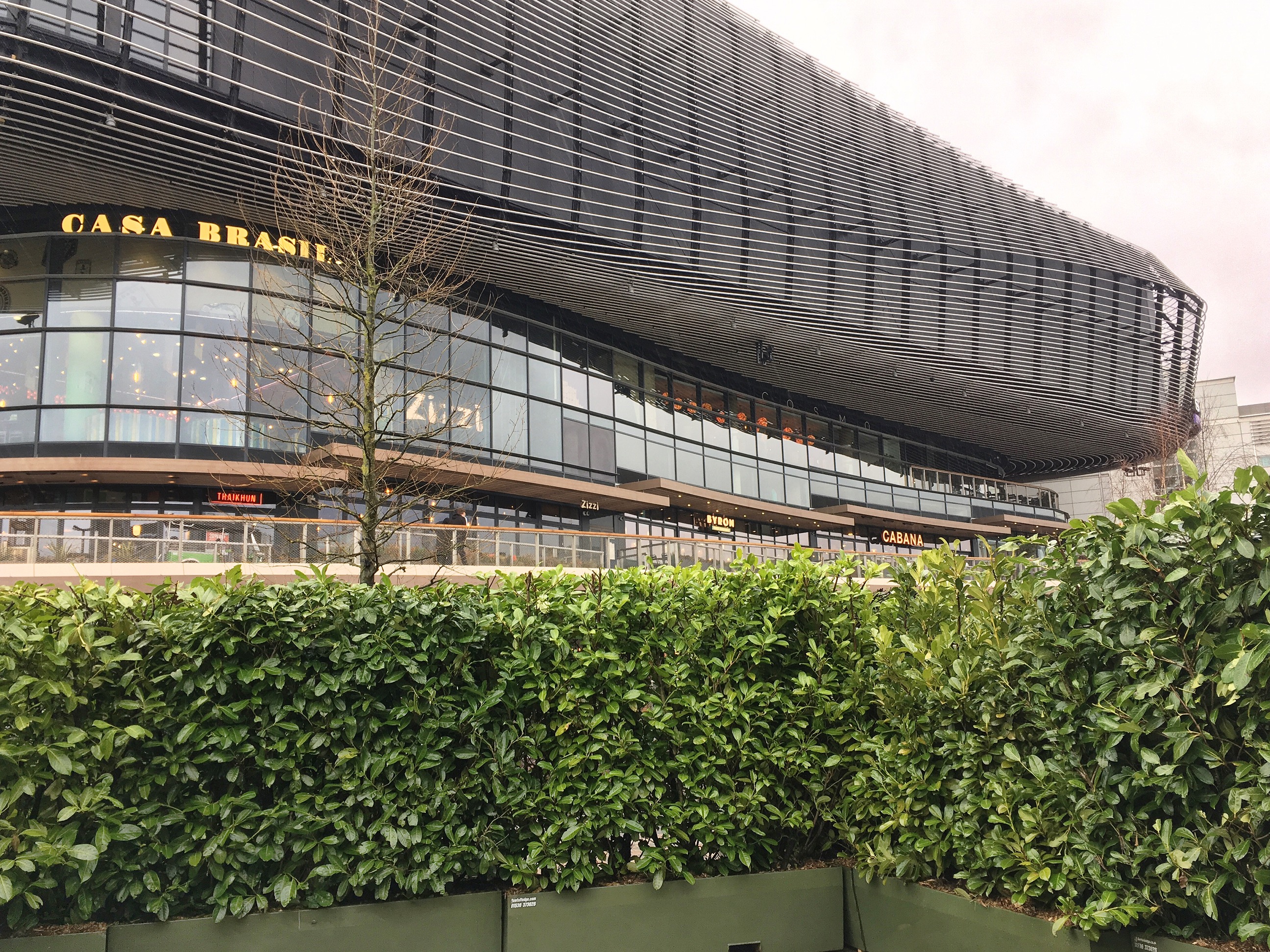 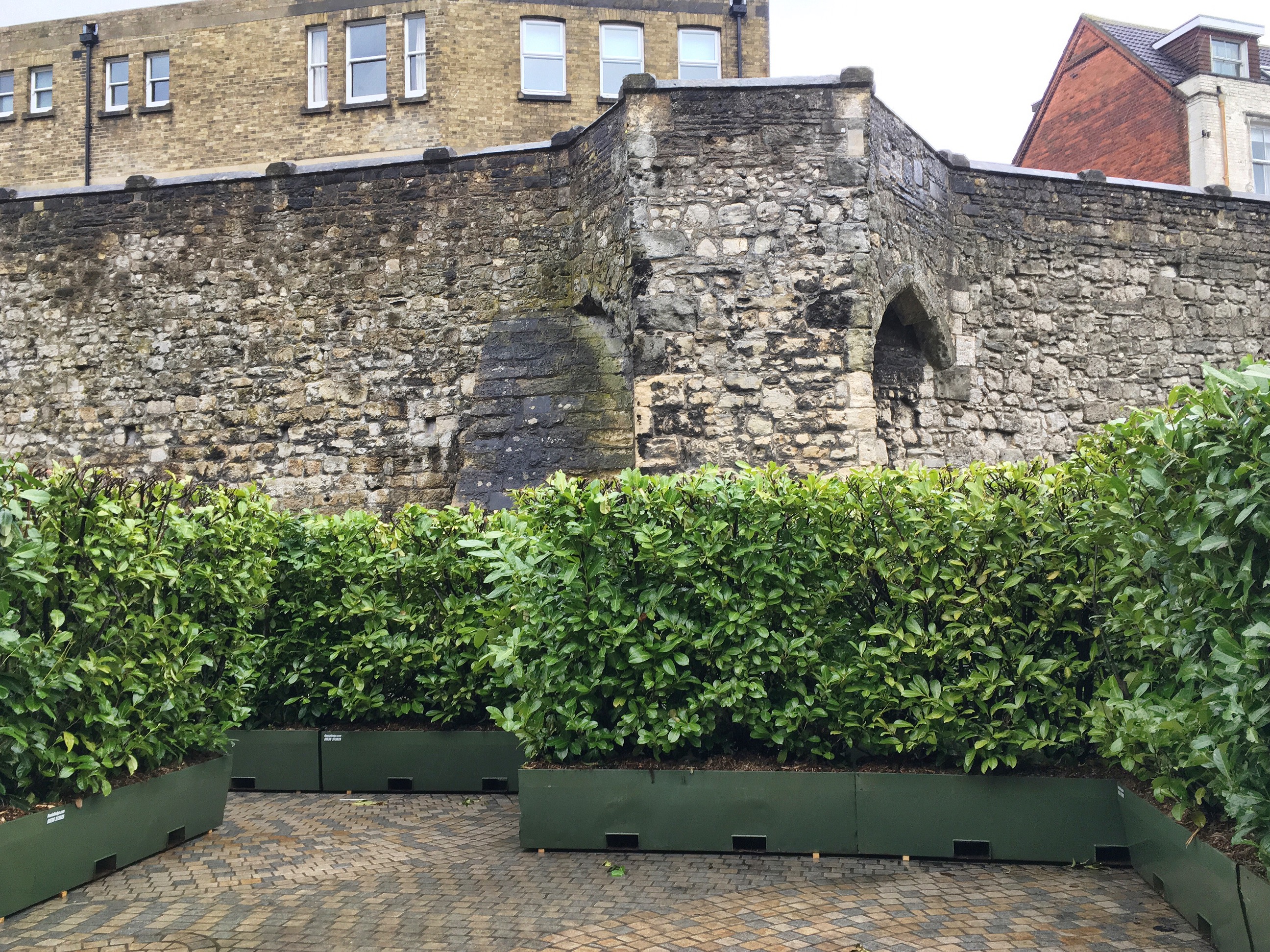 Right when I had convinced myself the hedge I was looking at was the exact same piece I’d already passed three times , the exit came into view. CJ had been right all along. We had defeated the maze in less than ten minutes, although it had felt like far longer at the time. We thanked the poor attendant as we left and headed off across the wet plaza. 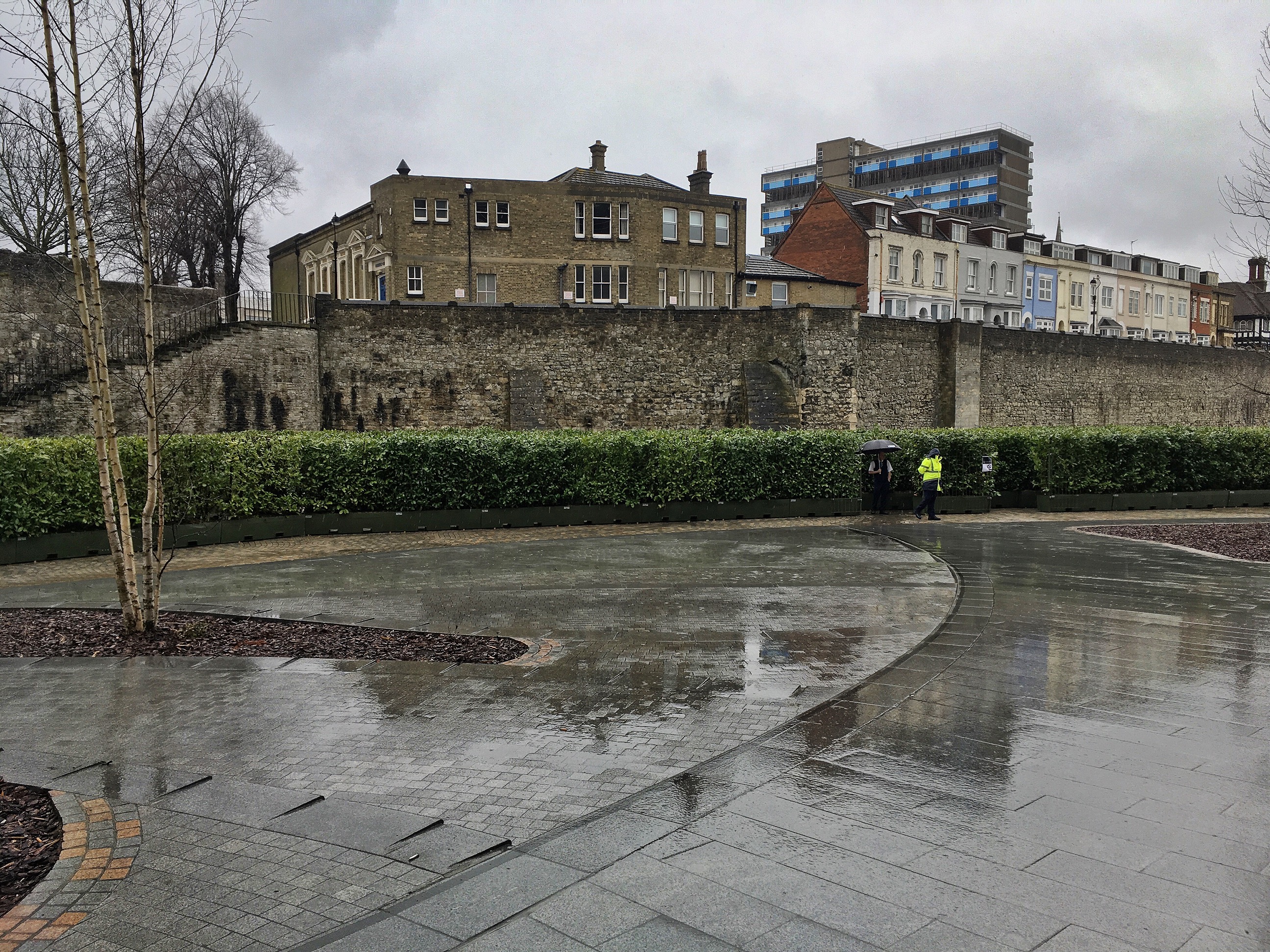 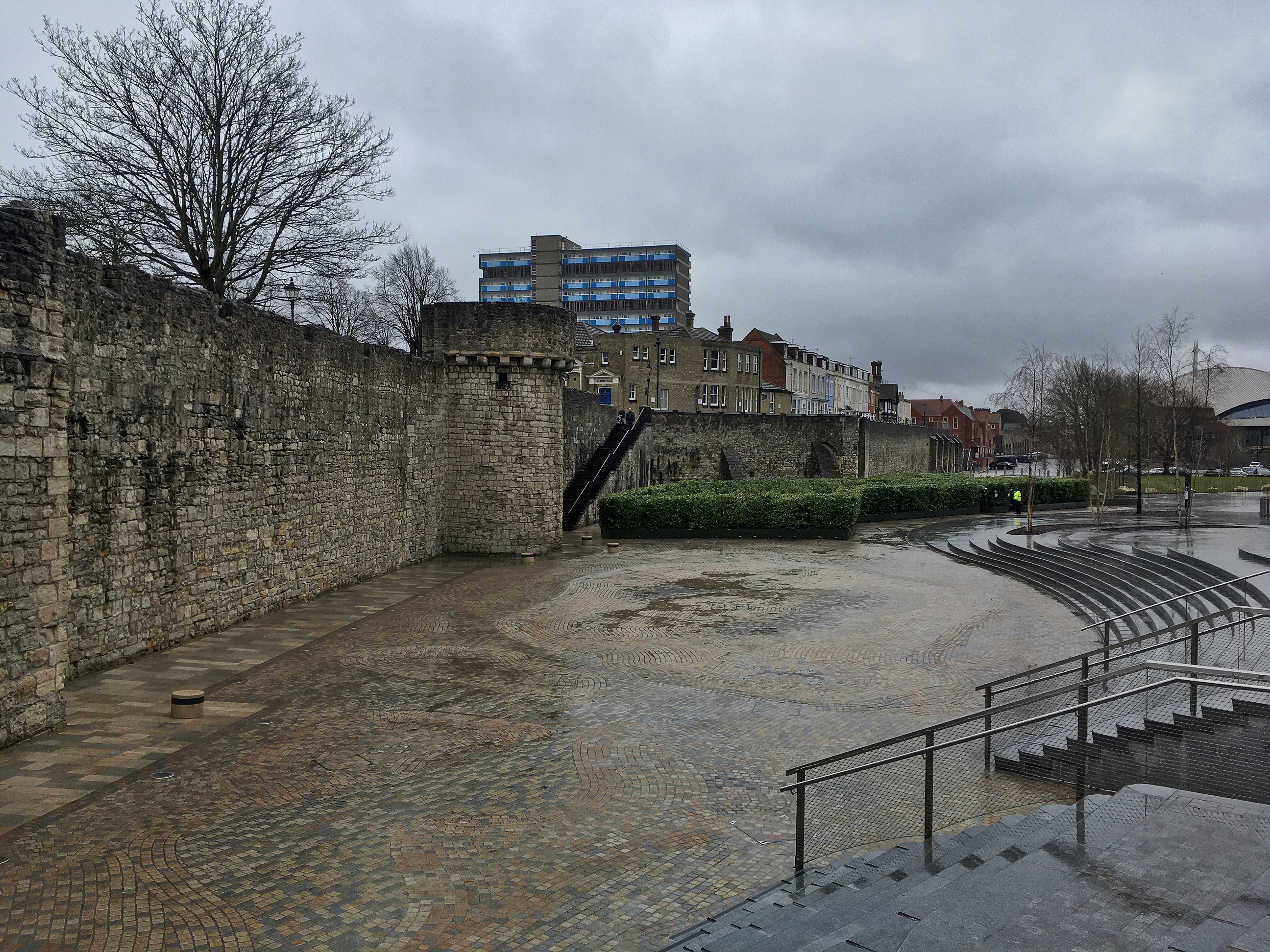 There was a prize of ice cream for completing the maze but, much as we both love ice cream, it really wasn’t the weather for it. Besides, I still had an errand to run at the top end of town, which meant we could visit the Artisan coffee shop as an alternative reward. 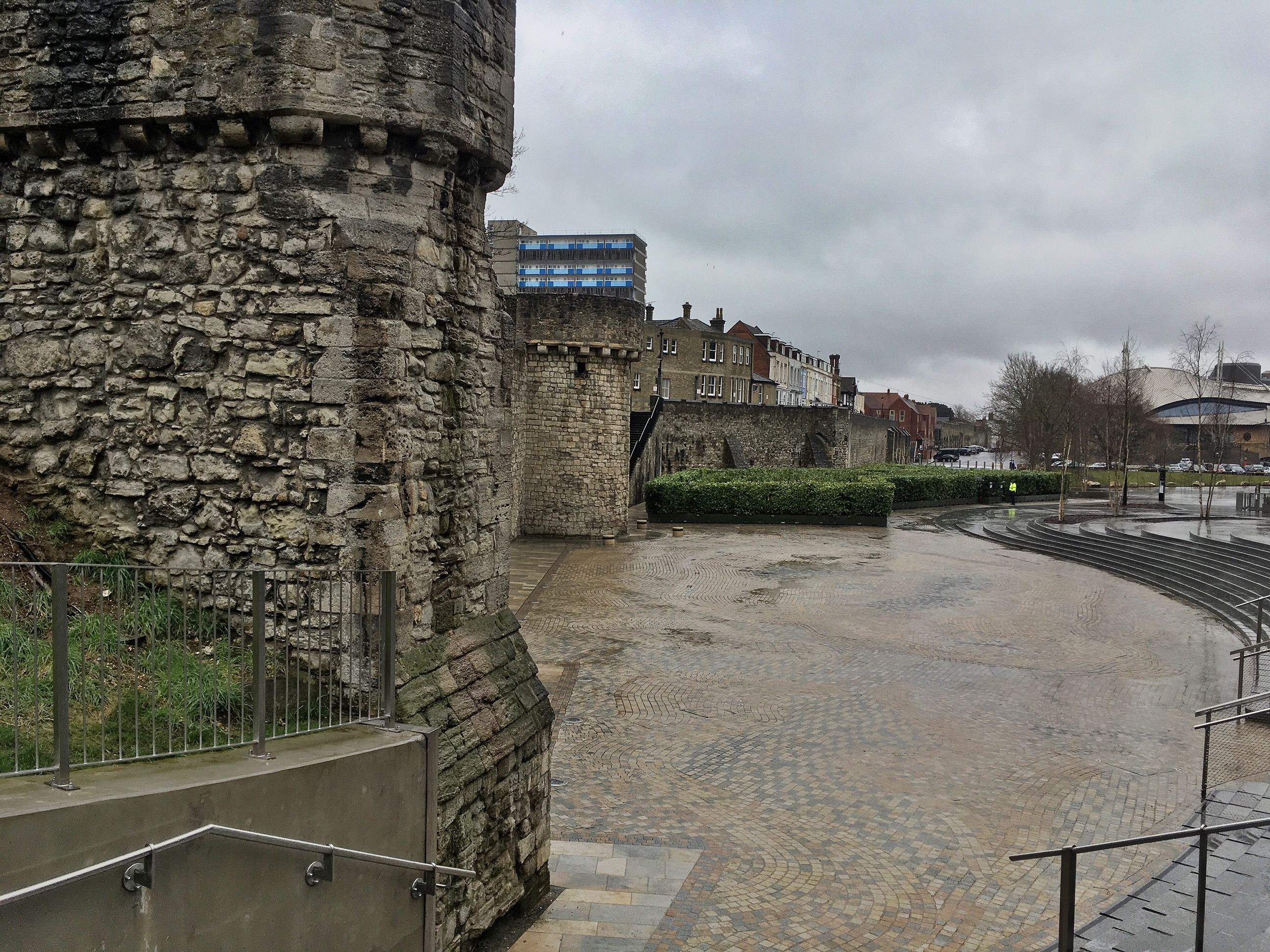 After a very enjoyable coffee and cake in the Artisan cafe, complete with some music from the 60’s that took me briefly back in time, it was time to head for home. We hadn’t got very far before an unusually colourful police car stopped us in our tracks. This, I later discovered, was the first Lesbian and Gay Liasion Officer’s car, designed by artist Kev Munday. The rain may not have stopped all morning but conquering the maze, a good cup of coffee and a brightly coloured police car certainly brightened a miserable morning. Now, if it would only stop raining… 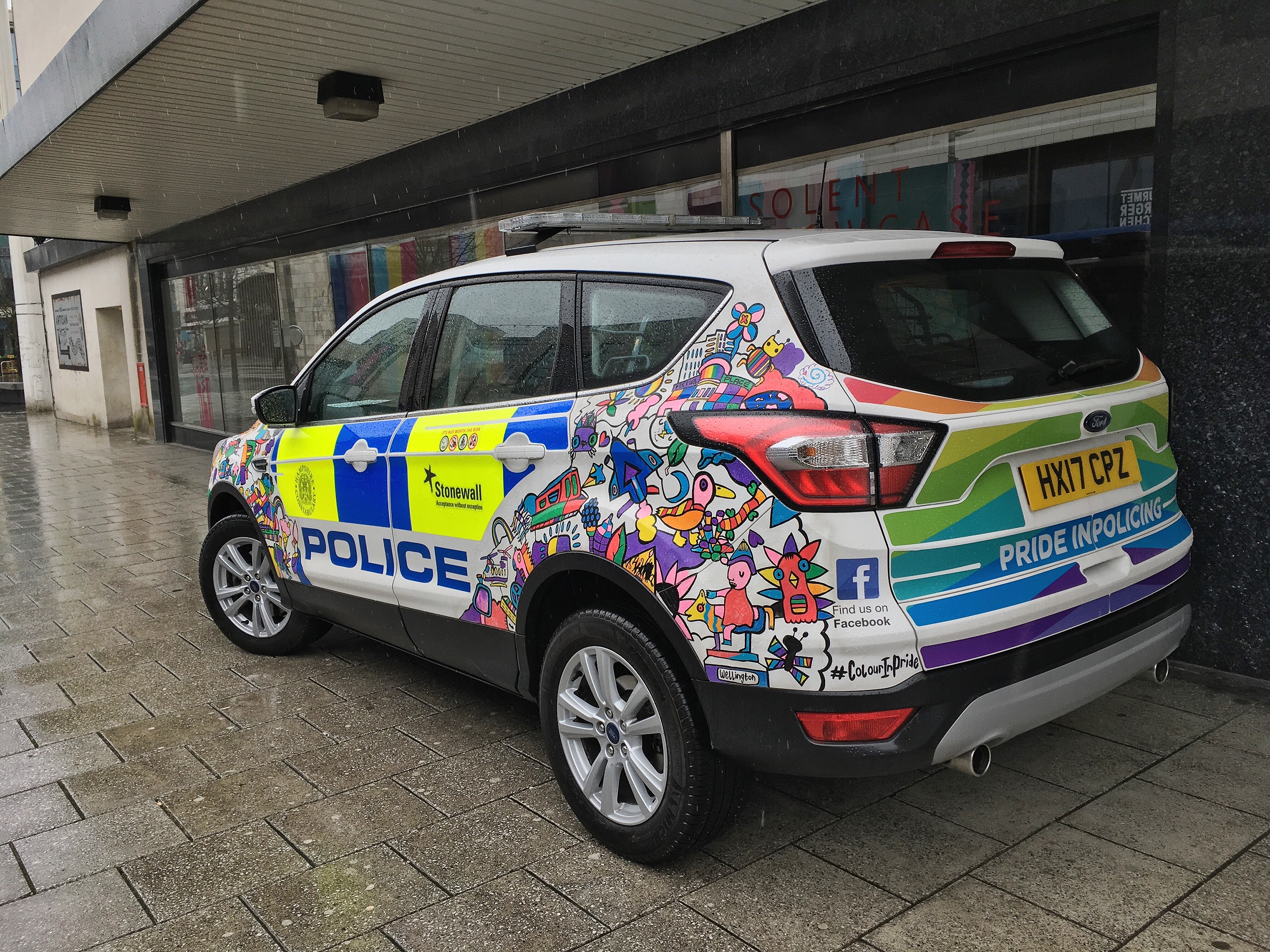 2 thoughts on “An amazing perspective on the old walls”