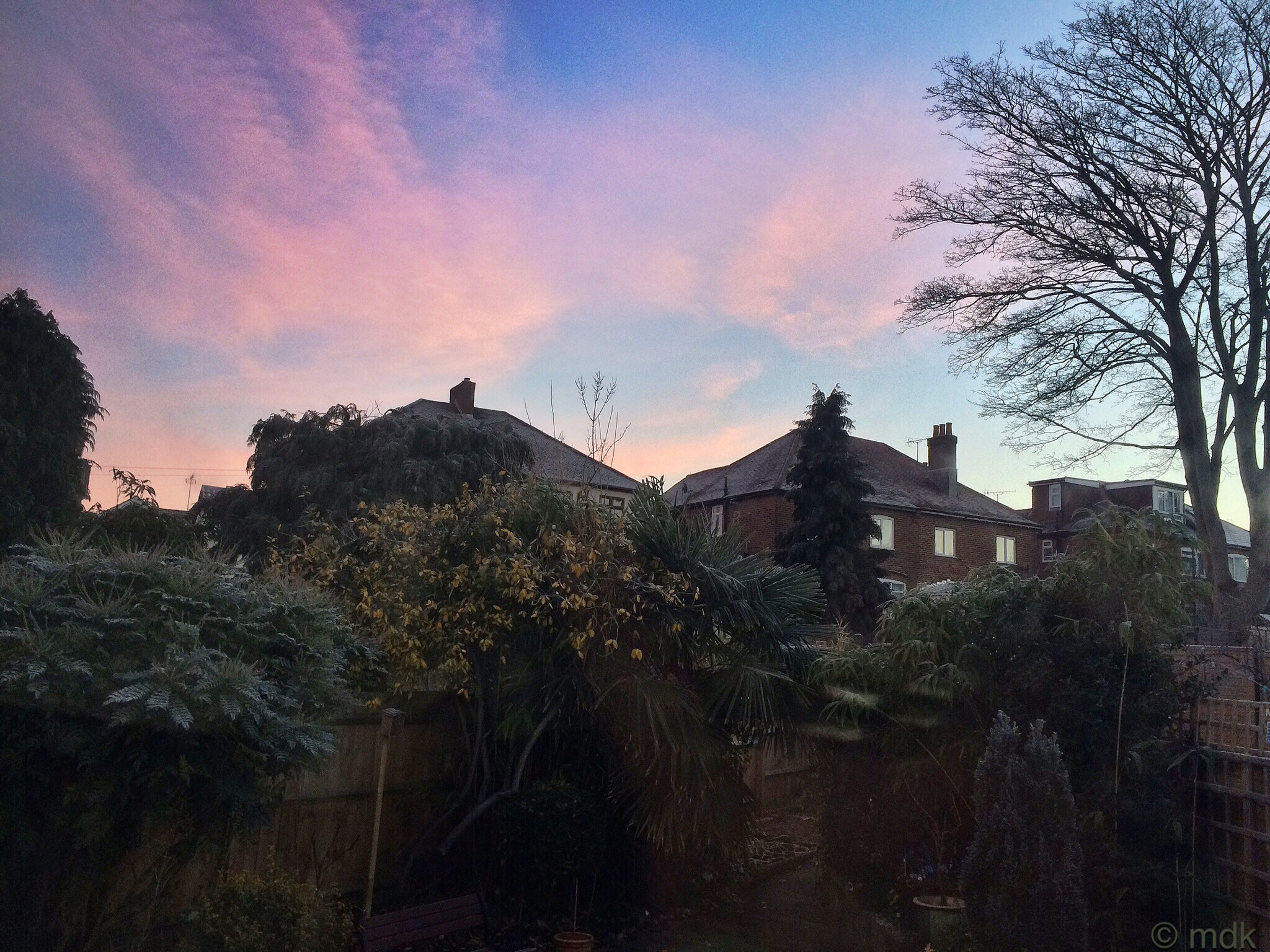 As I was leaving work on Saturday afternoon the sky darkened. Something very strange began falling from the brooding clouds, a cross between snow and hail, fat fluffy balls that went splat as they hit the ground or me. Thankfully Commando was waiting for me in the car because pretty soon the roads were white with these odd balls of snow and ice and they were gathering under the windscreen wipers. Apparently this was graupel, snowflakes that become rounded pellets when they mix with supercooled water droplets which freeze to them in a process called accretion. When I looked out of the window on Sunday morning they were still there, frozen to the decking and the deck rails under an arc of icy pink clouds. 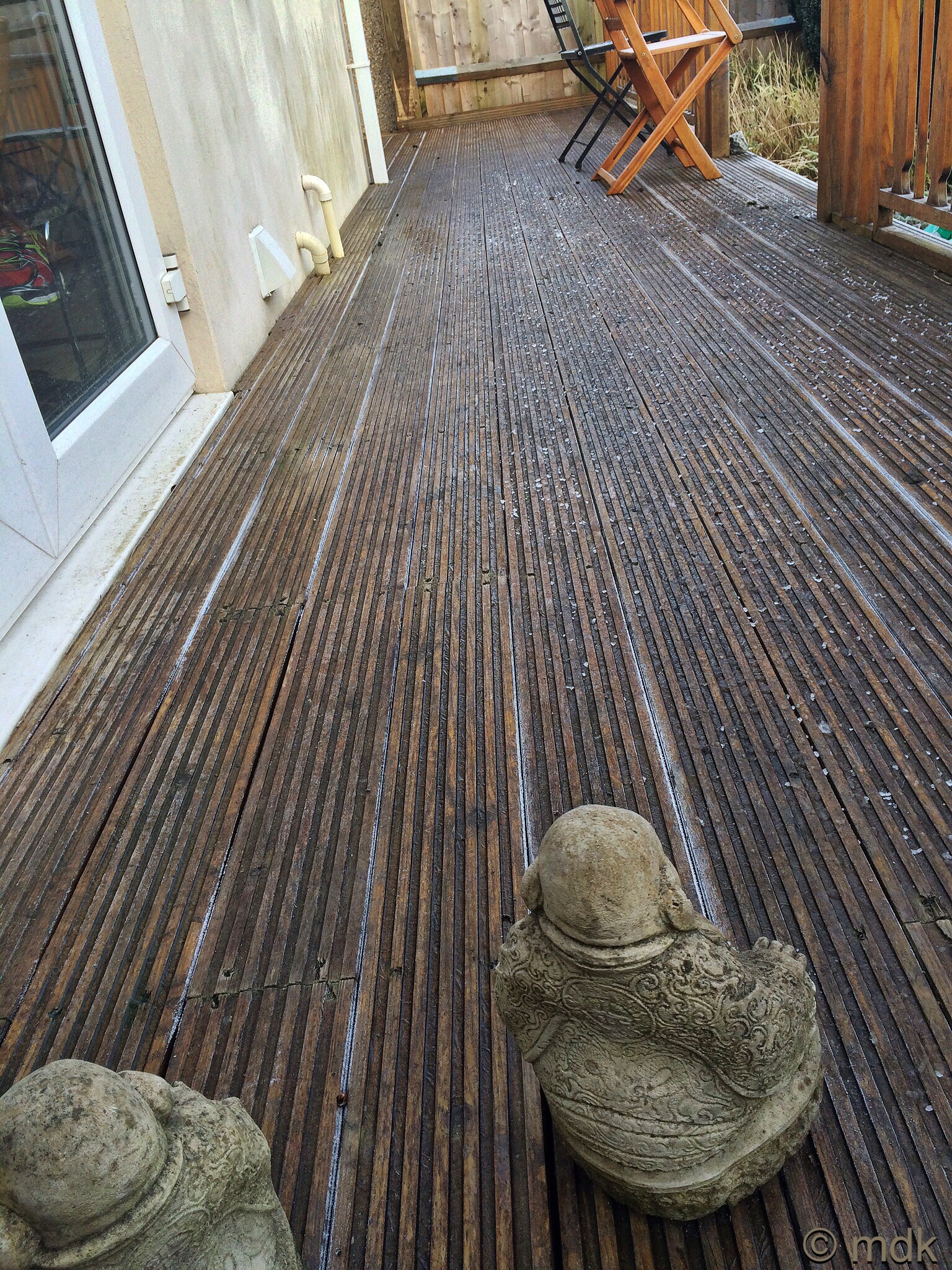 The reason I was up early enough on a Sunday morning to see the pink dawn clouds and the frozen graupel was the Muddy Beach Run, otherwise known as the Portsmouth Coastal Half Marathon. Commando was running it and, of course, I was going along as support crew and chief cheerleader. After a swift breakfast I set about taking some photos of the strange icy growths on the deck rails while Commando warmed up the car and cleared said  ice fur off the windscreen. The graupel balls had become weird spiky crystals and the deck rails were covered with feathery growths along with a forest of needle like columns sticking up in odd directions resembling my hair just after I get out of bed. 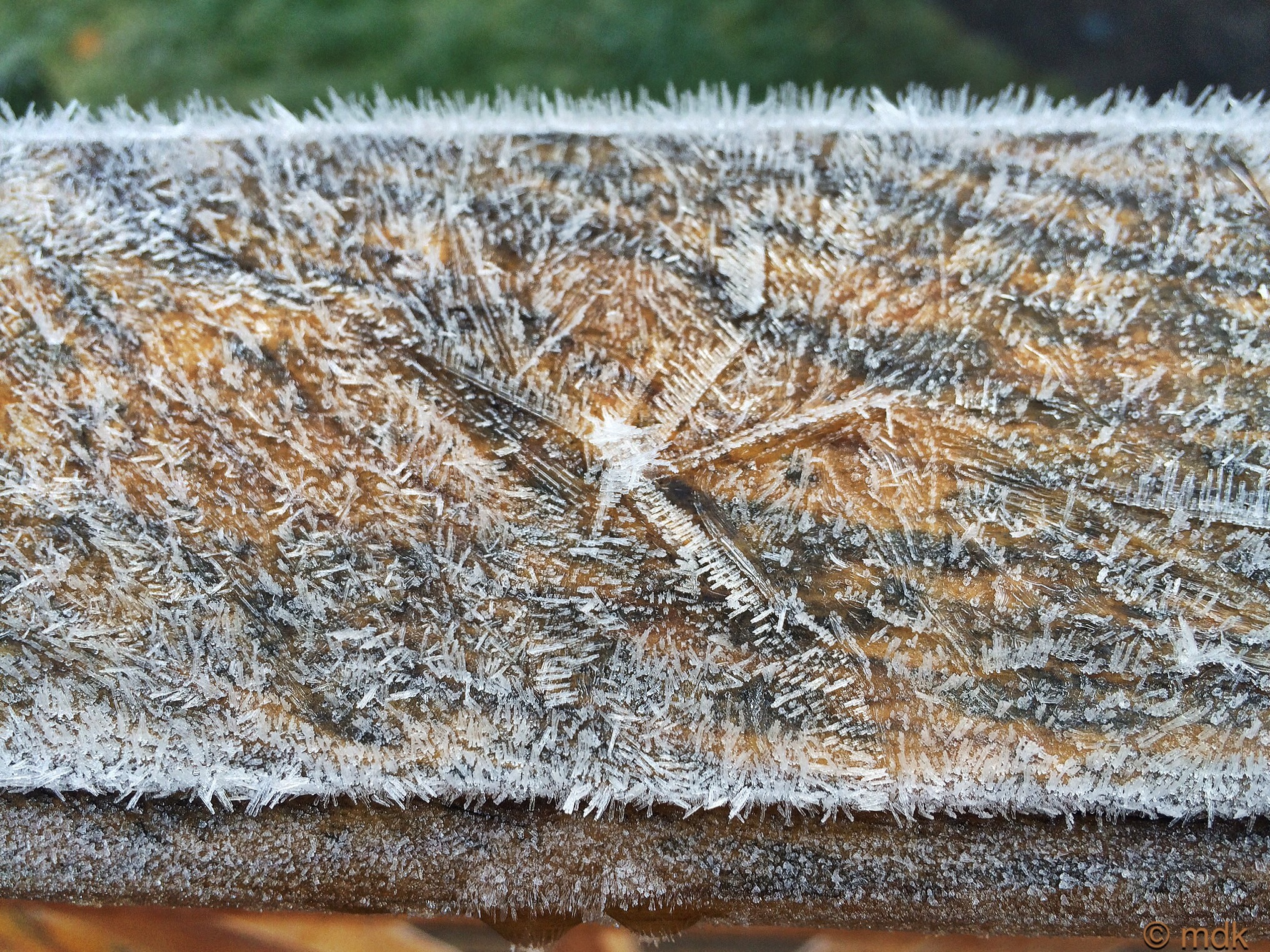 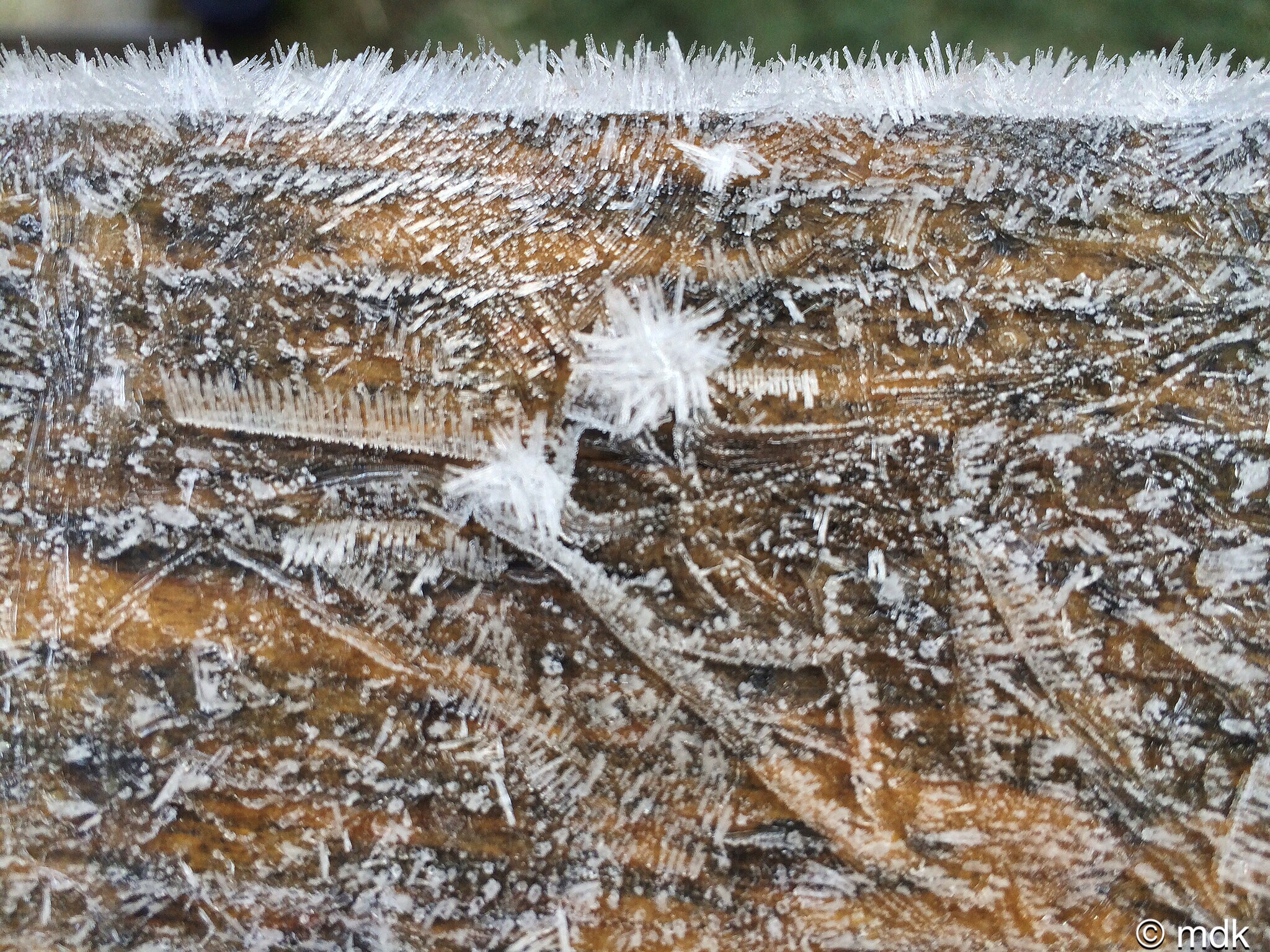 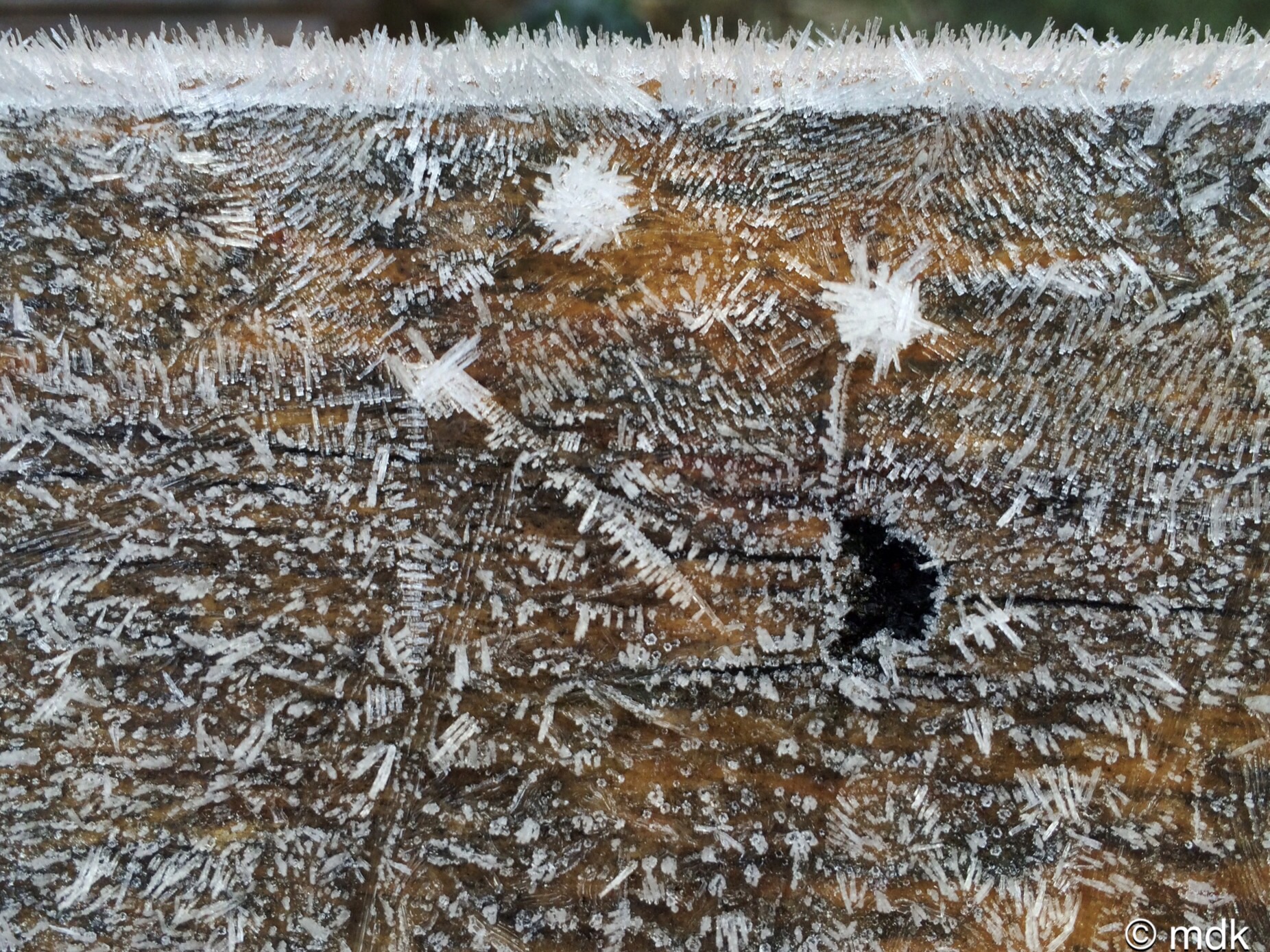 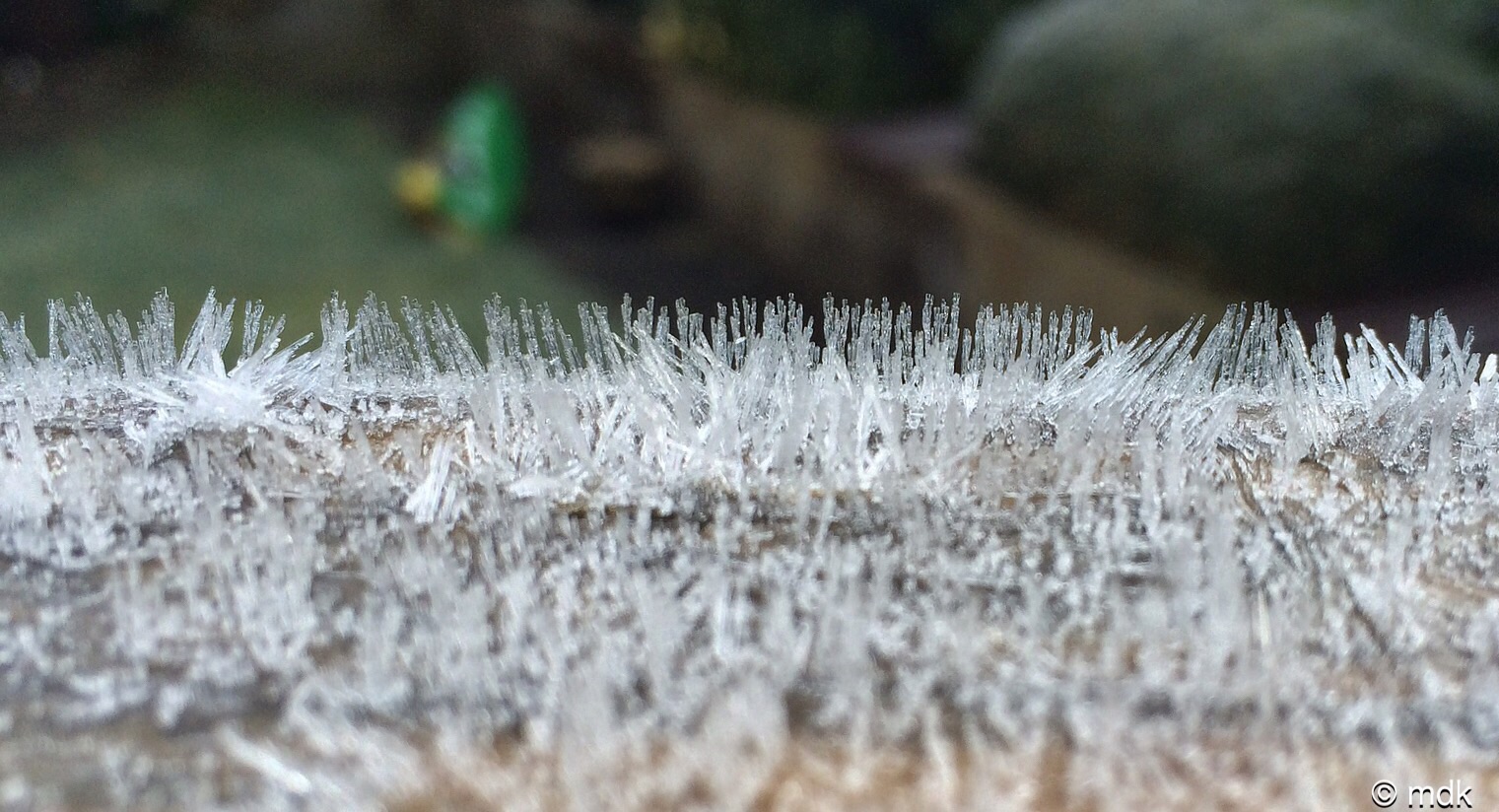 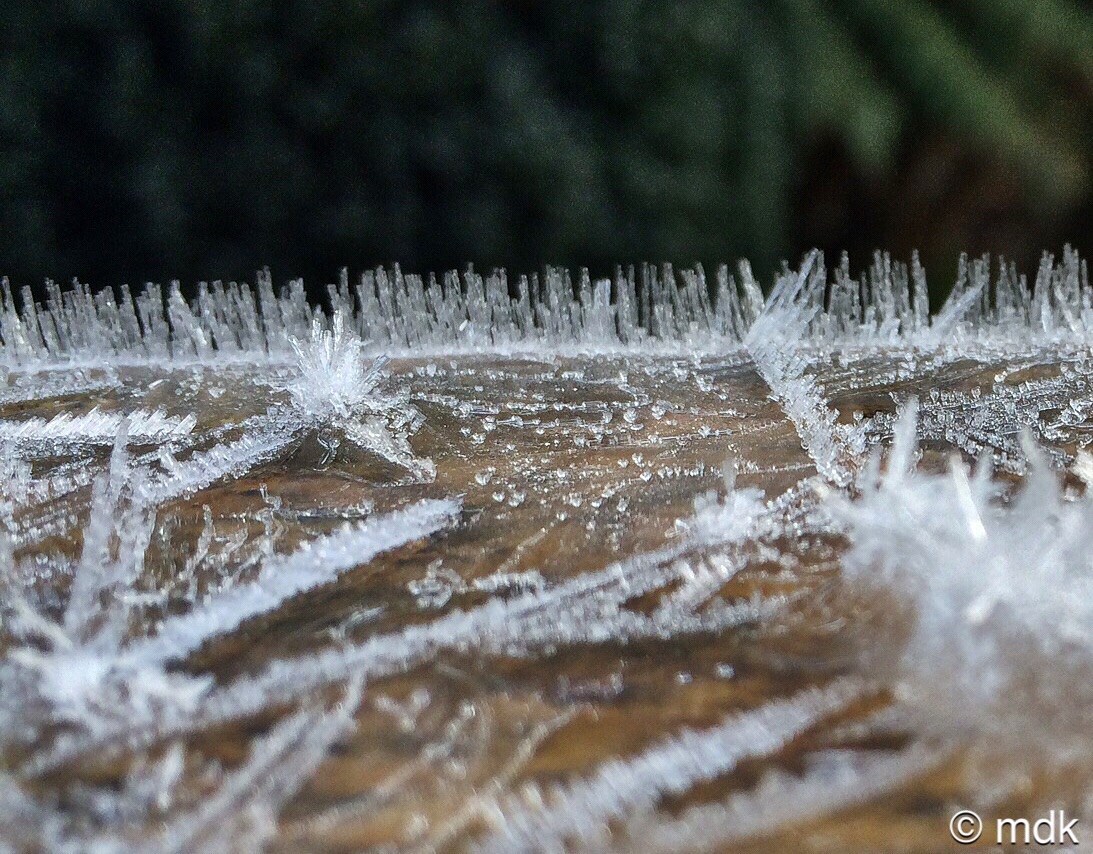 Remembering the freezing cold winds of last year’s Muddy Beach Run, I was wrapped up in a multitude of layers as I left my icy garden. A covering of frozen graupel made the car look as if it had a punk hair do and morning mist swirled in the light of the low sun. On the motorway clumps of icy stuff fell in powdery explosions from the roofs of cars, ours included, but at least the roads were clear, unlike the little hill where our ABS had been the only thing standing between us and a nasty skid. 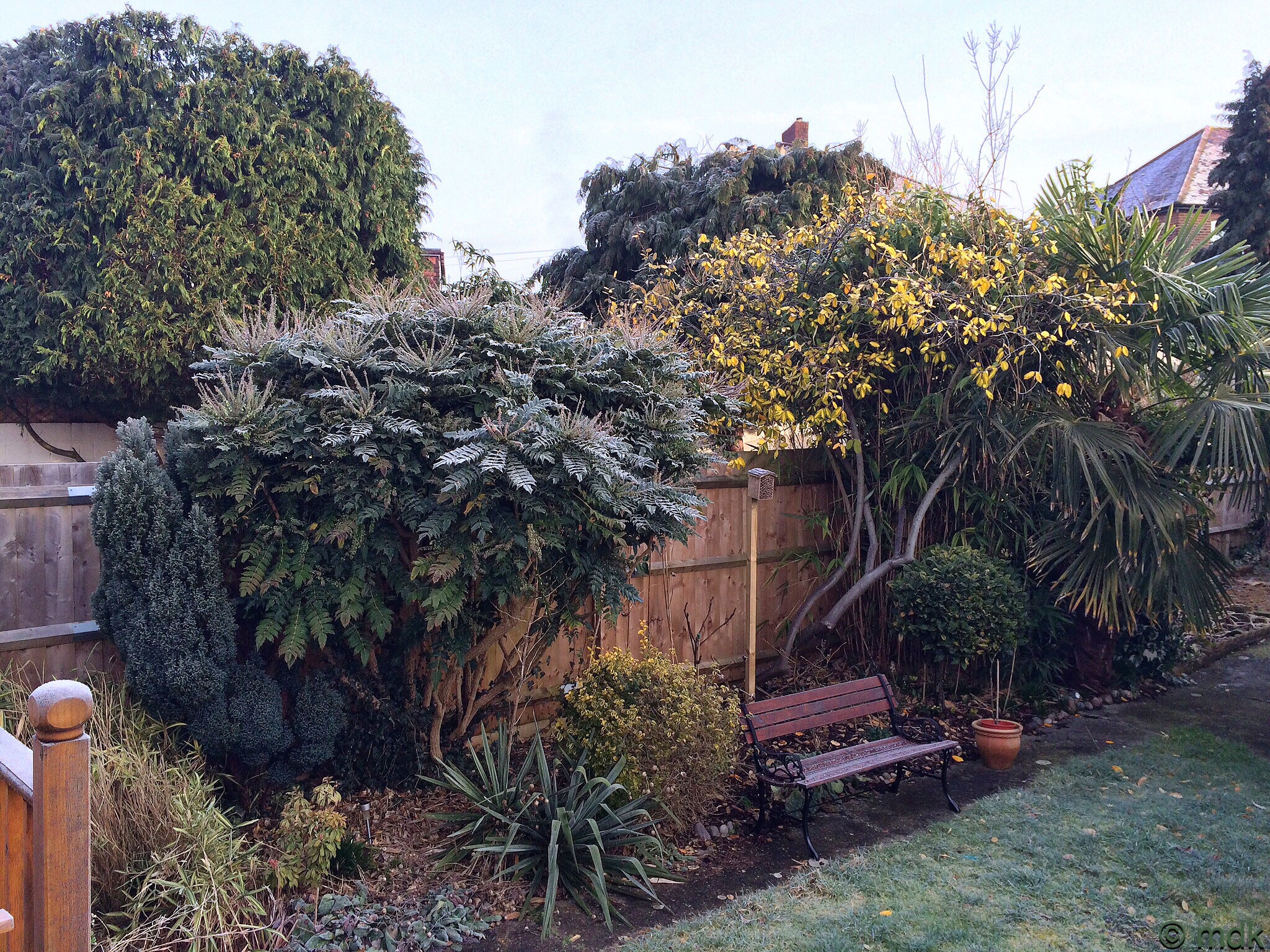 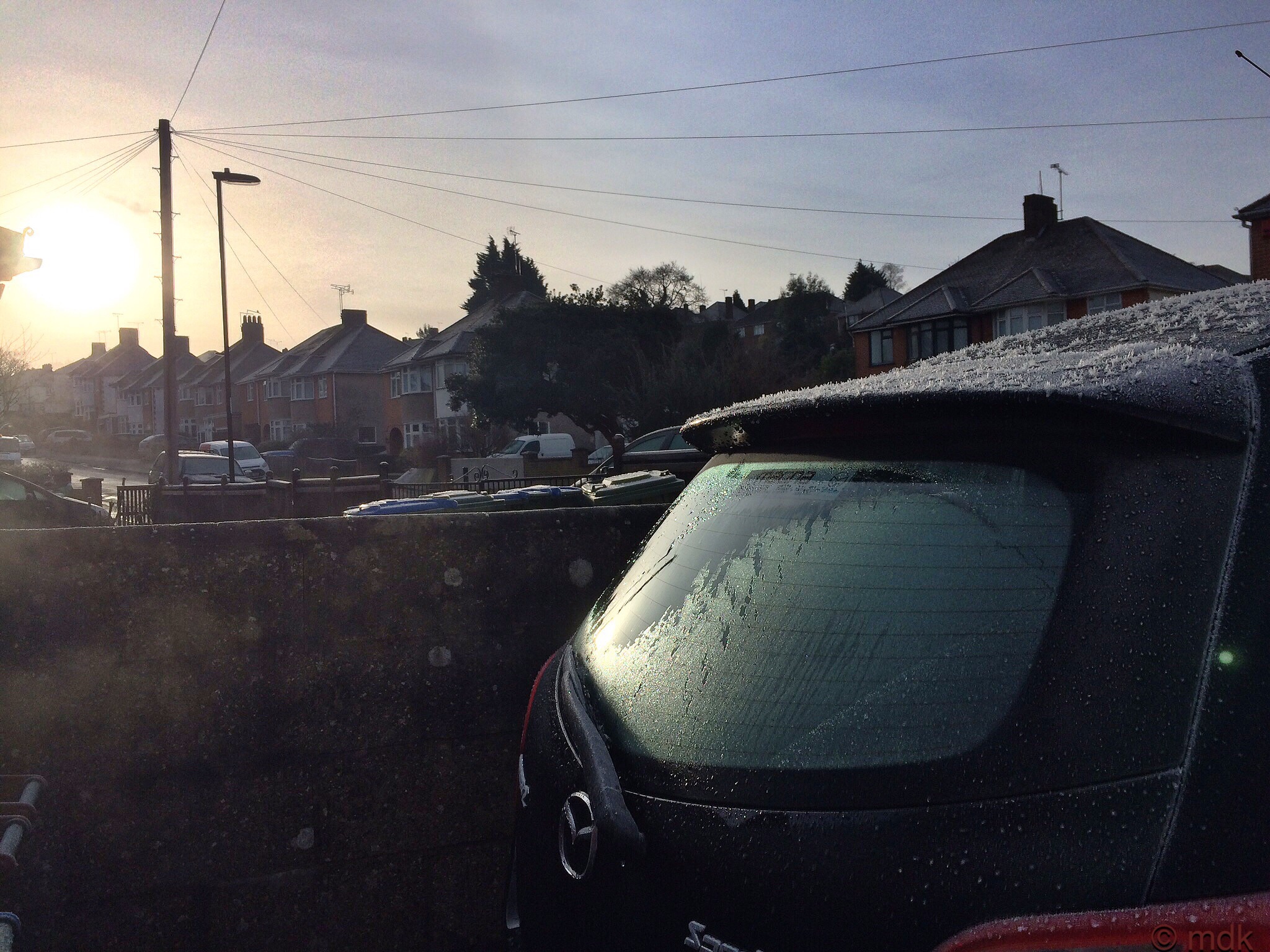 We parked up in the D-Day Museum car park by Southsea castle and, while Commando sorted out his running shoes and water bottles, I had a closer look at the strange holes that run around the old brick wall there. Whether these are some kind of gun port or spy holes I’m not sure but the salty sea air has pockmarked the bricks and eaten away the limestone inserts at the top and bottom of each. Being early, we had the car park more or less to ourselves. 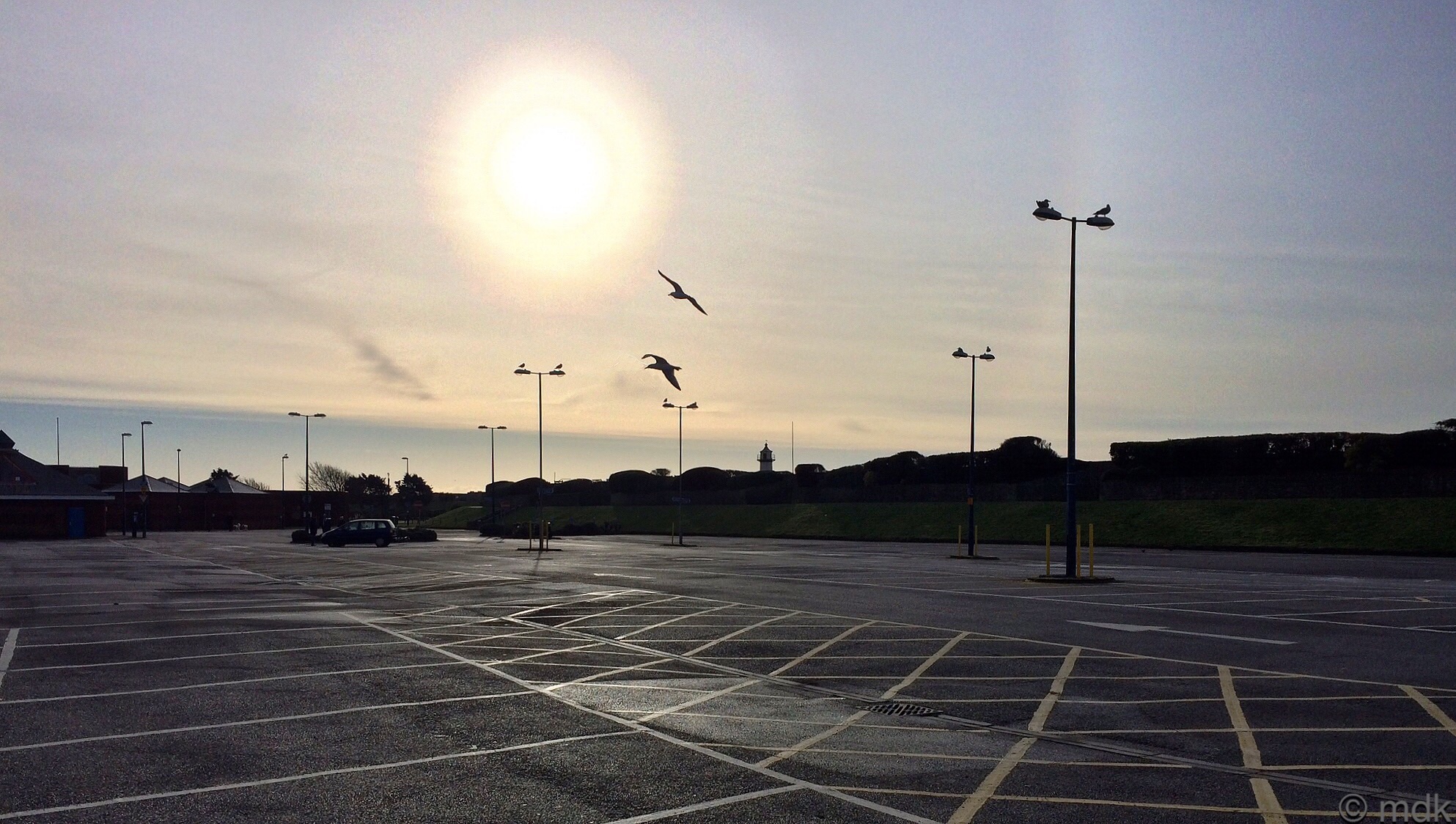 Seagulls soared overhead and the castle lighthouse was sillhouetted against the sky. Although The sun was doing its best to burn through the low cloud there were still pockets of ice around. As we made our way to the bag drop at The Pyramids I managed to find one particularly large iced over puddle and, in slow motion, slid onto one knee with my arms outstretched trying to keep my balance. Somehow I stayed upright. Commando said it was the most graceful slipping up he’d ever seen, like a ballerina taking her final bow. Personally I was glad the only other witness to my embarassment was a man standing at a bus stop and he was holding a white stick. That’ll teach me to concentrate more on where I’m putting my feet rather than trying to walk and take photos of the tanks and statue outside the museum at the same time. 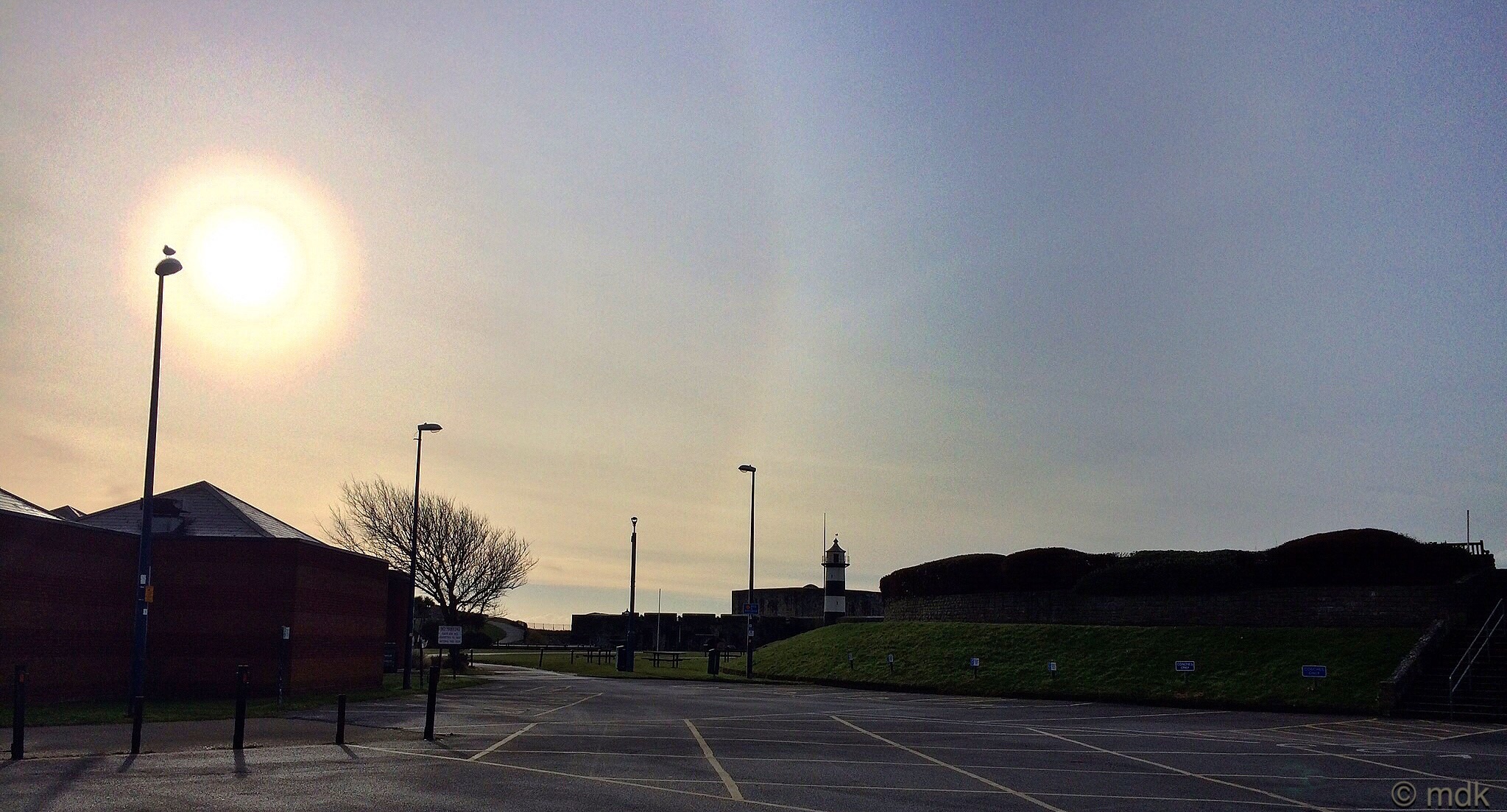 As Commando sorted through his bag in preparation for stowing it he realised he’d forgotten his post race chocolate milk.
“Do you think you could keep an eye out for some when you’re walking?” he asked.
“There’s bound to be somewhere selling drinks,” I said, feeling far less hopeful than I sounded. From past experience Southsea in February is a fairly bleak place and the few cafes along the sea front were closed last year. Still, I had two hours and my planned walk was only five miles so I figured I might have time to dash up to the little precinct where I’d found shops and the only Costa coffee emporium in town last time. Once the bag was stowed we sat for a while making the most of the warmth and breathing in the pervasive smell of wintergreen all around us. Commando grumped and hid his face as I tried to take a pre race photo of him but I sneaked one anyway.

All too soon we had to go out into the cold again. Commando lined up with all the other runners and I told him to watch out for ice and gave him a kiss for luck. Hopefully I didn’t also pass on my cold. With eight weeks left before the London Marathon it’s the last thing he needs.
“At least it isn’t as windy as last year,” he said, squinting into the morning sun. “Hopefully I can knock a few seconds off my PB.”
“Just take it easy and enjoy it,” I told him. “No heroics so close to London, you don’t want any injuries.”
Then, with no warning at all, they were off and I watched him disappear into the bobbing crowd. 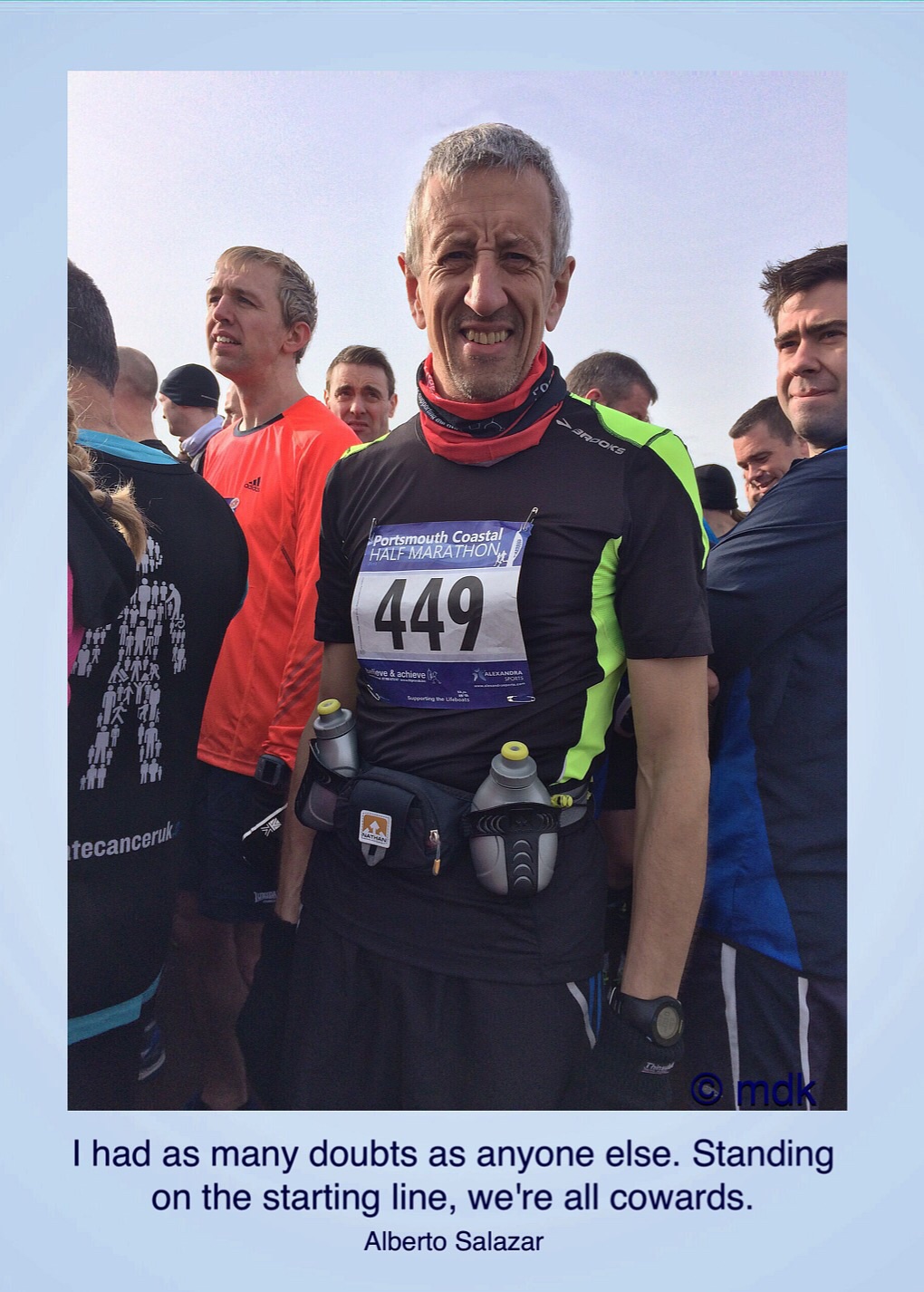 It’s a funny business being a runner’s wife. There are cold early starts to get to races, all the build up and nerves and then, when the race begins, they disappear into the distance and all you can do is wait and worry. Moving away from the start line I knew I had roughly two hours until he’d finish, although I like to be back at the finish line well before that to get a good place to watch for him. As the sea front was a mass of runners I started my own journey with a stroll through the Rock Gardens beside the Pyramids.

These beautiful little gardens with twisting crazy paved paths are a welcome escape from the sea breeze. It’s hard to believe this was once just gorse covered foreshore, often flooded and probably quite boggy. In the early 1920’s, under a government scheme to provide jobs for the unemployed, local, mainly unskilled, men were employed to build an informal garden. Rock and boulders were transported from Cumberland for the job and the area was planted with evergreen shrubs, alpines and herbaceous plants that could withstand the salt spray. Wattle fencing was errected to protect the young plants from the fierce costal winds and the little garden thrived. 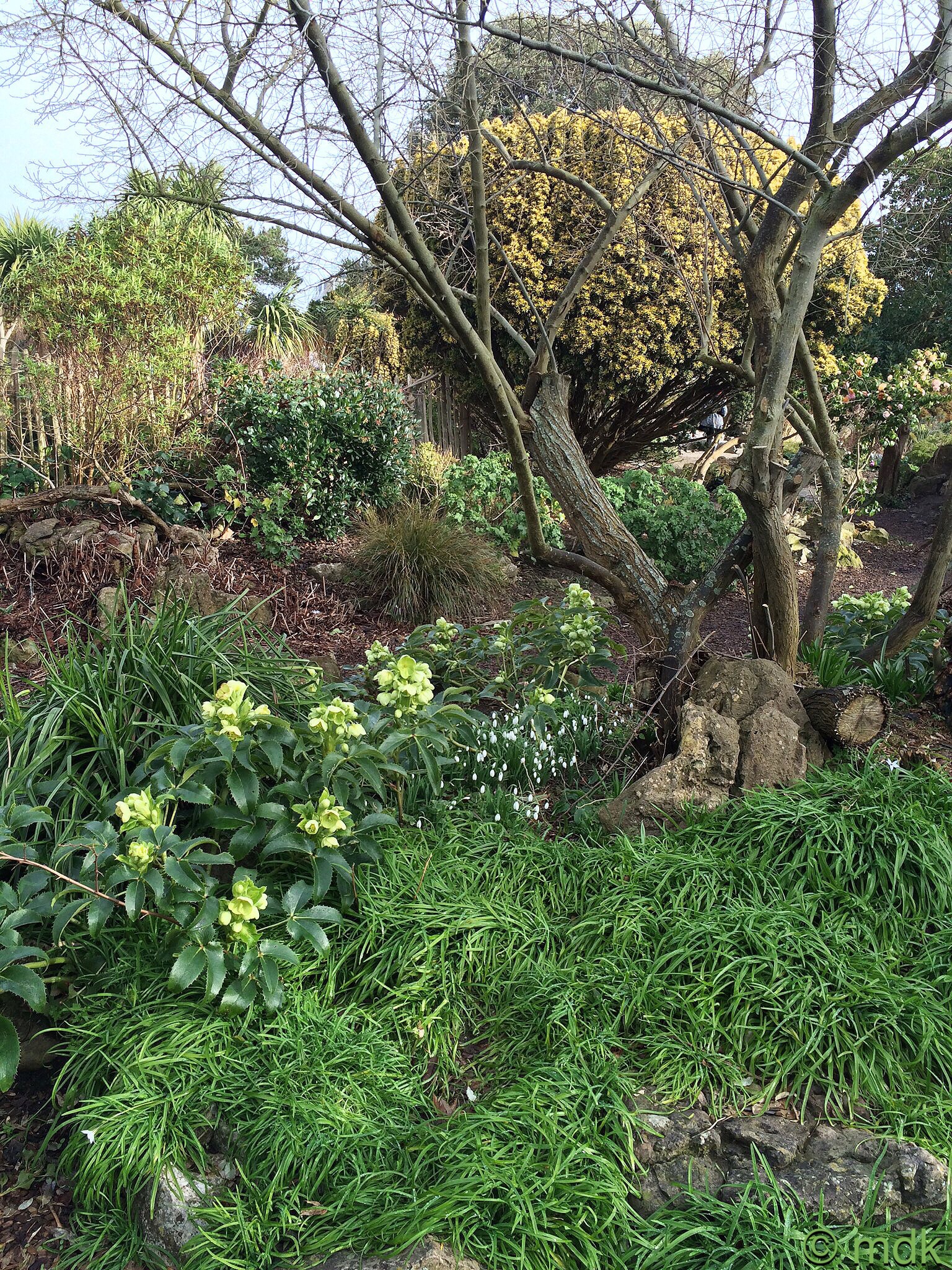 After the terrible bombing of the blitz the Rock Gardens were one of the first places to be renovated and the entire area was replanted with marine tolerant evergreens and alpines. Lighting was added in the 1950’s and the paths have recently been reconstructed, although in such a sympathetic way you’d never know they were new. Today there is one full time gardener and a team of volunteers, the Friends of the Rock Gardens, who do a wonderful job of keeping things looking lovely. Despite the cold, a few flowers were doing their best to brighten up the place. Some, like the green hellebores and vivid pink bergenia, I recognised, others I didn’t, but all were a welcome sight. There were even a few jelly ear fungi on a log and some prickly looking cacti in a quiet corner. 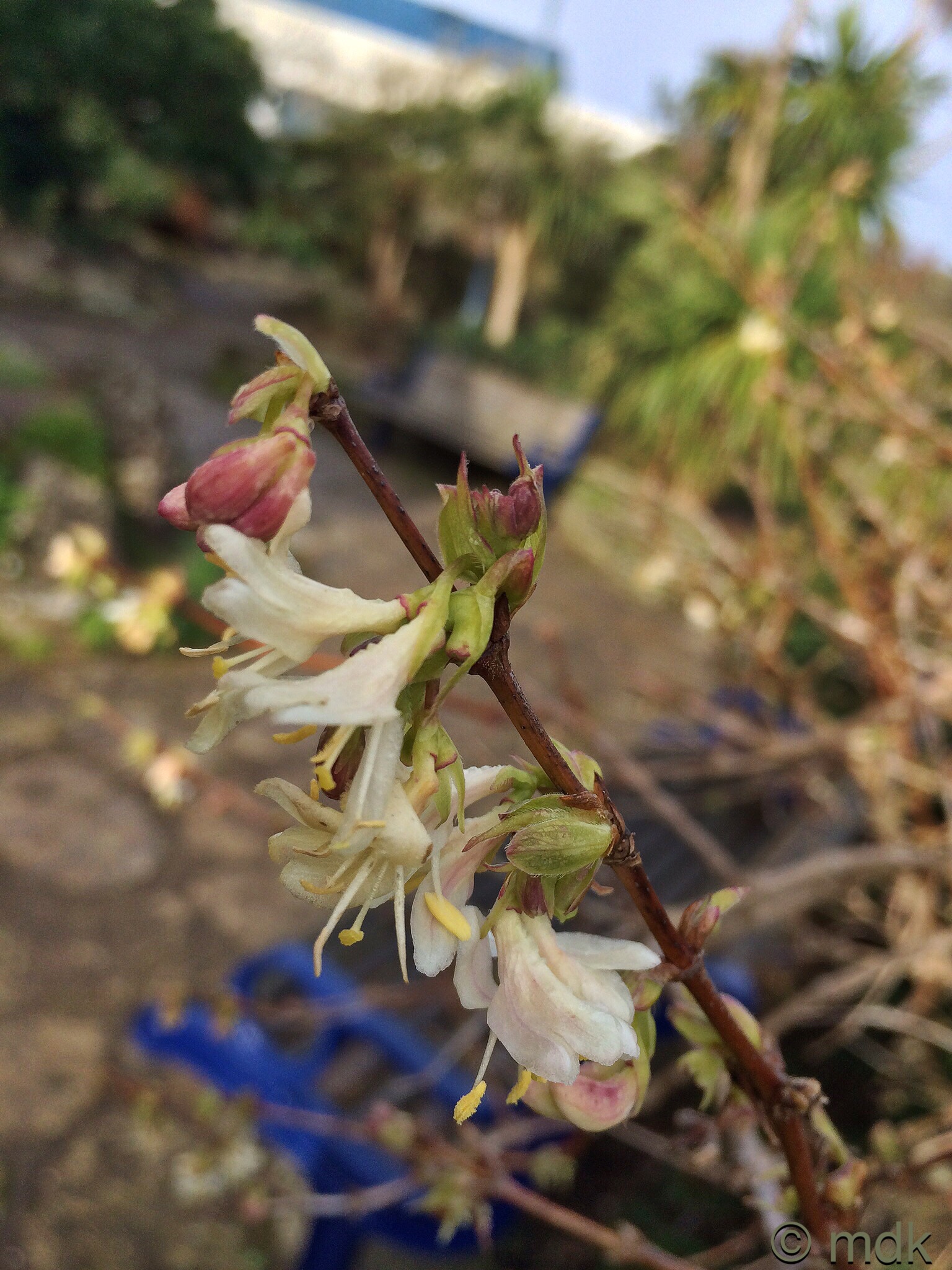 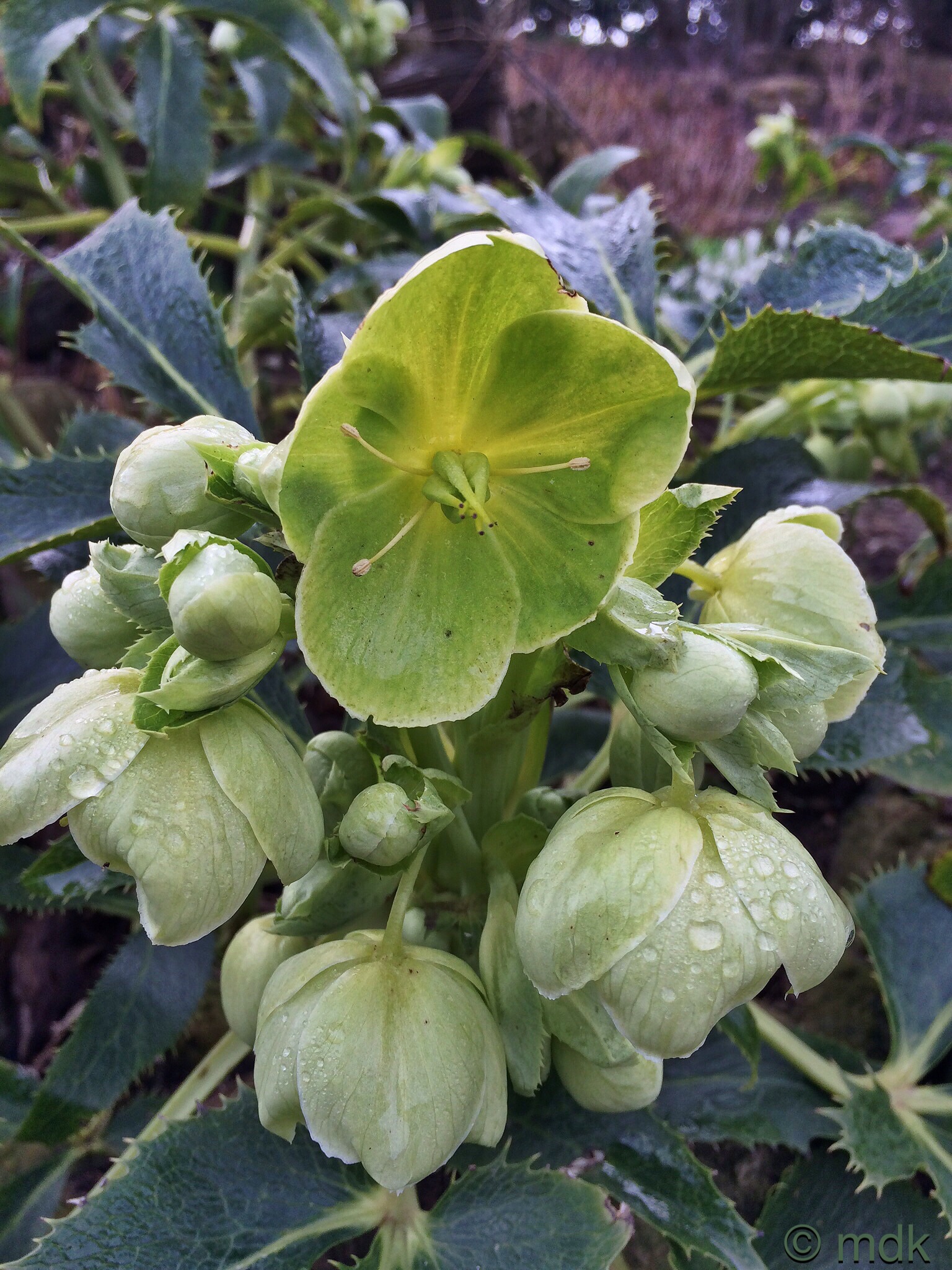 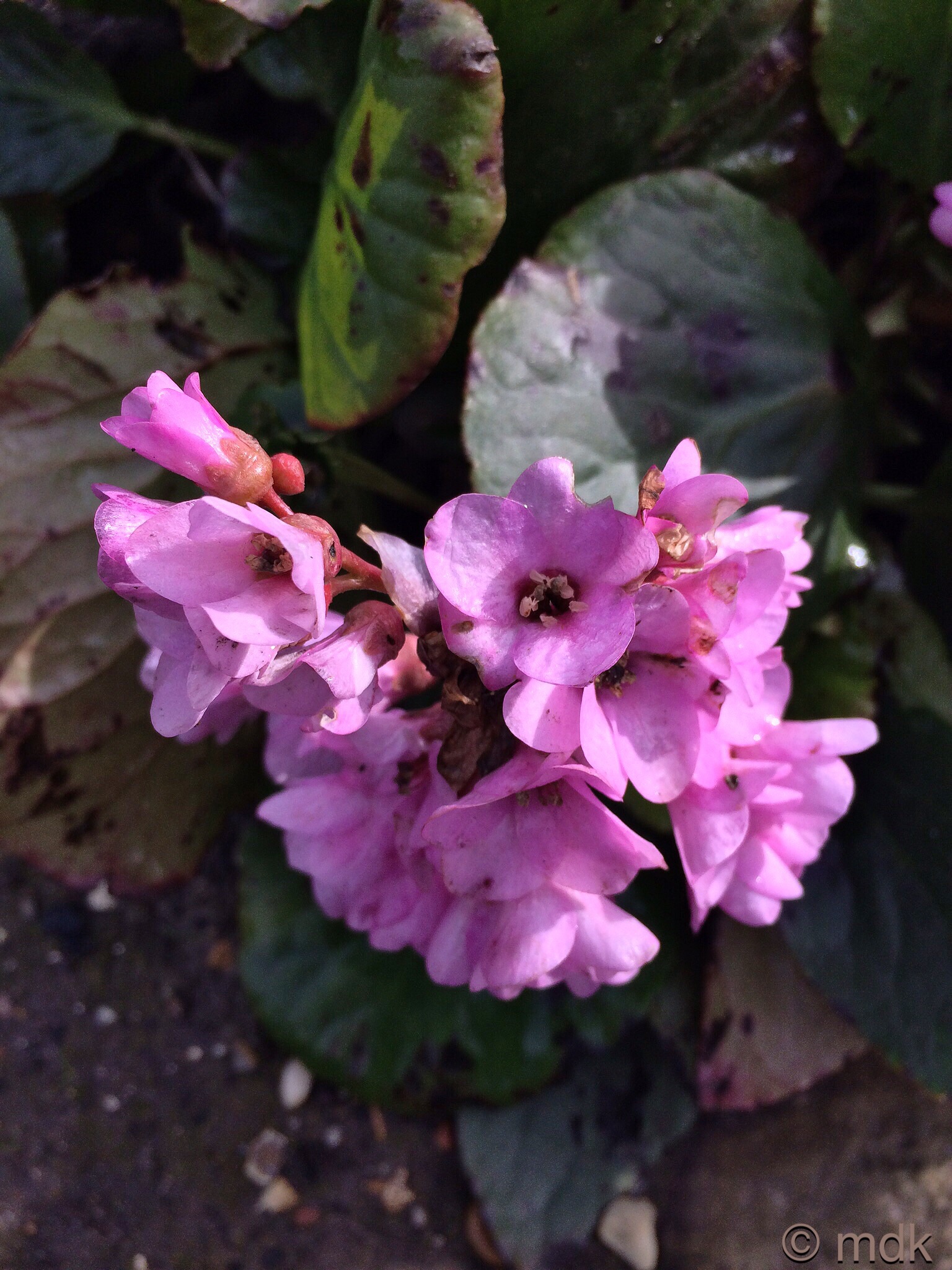 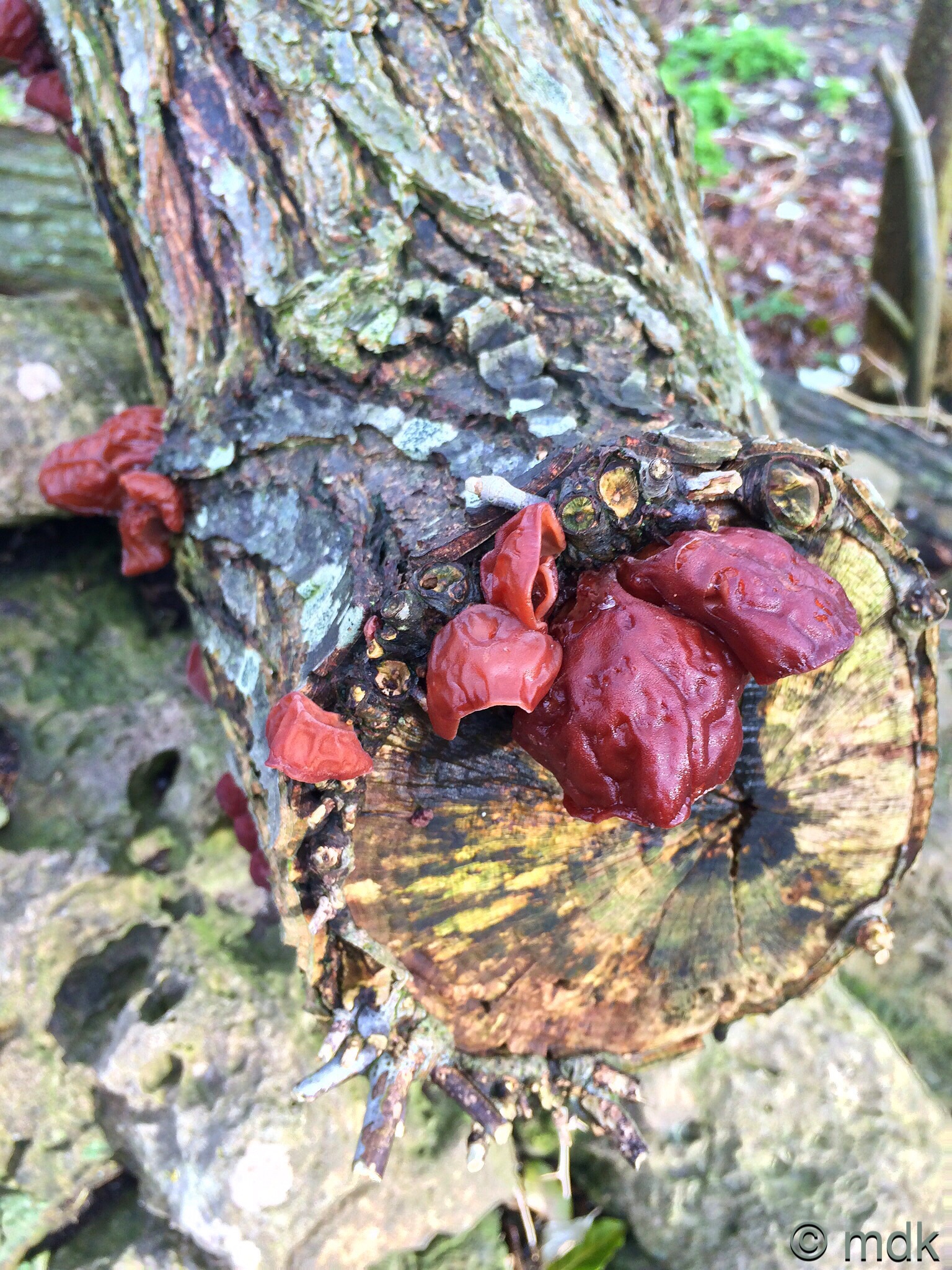 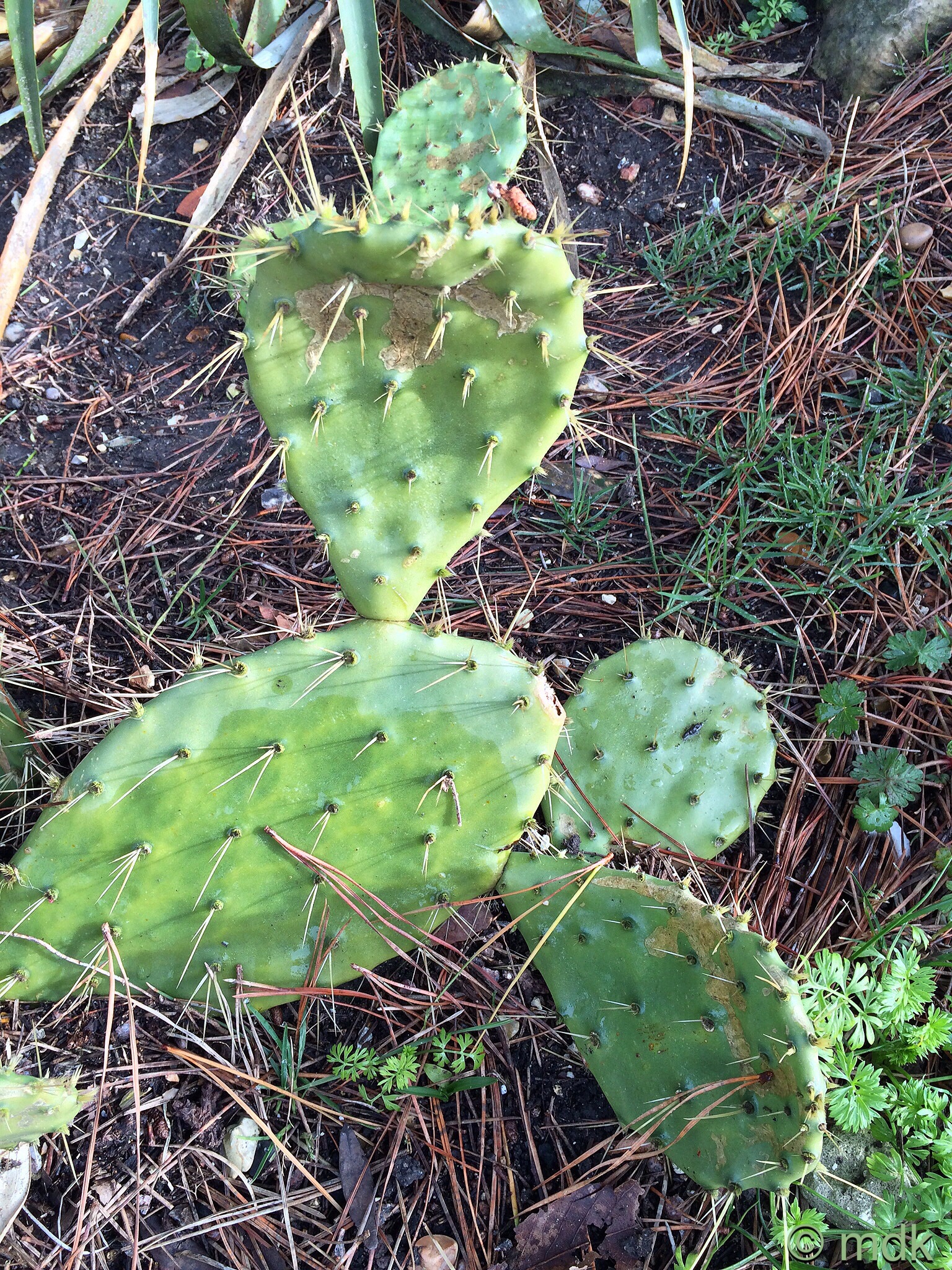 With so many little paths to explore, I could have happily stayed right there poking about until Commando came back but I thought I ought to get on with some walking. Rather reluctantly, I left the rock garden behind and made my way back to the promenade.  The runners had gone and the sun was coming out so I marched off towards the pier wondering if there’d be anywhere to get a coffee. Southsea is an odd kind of place that doesn’t seem to have changed much since the 1950’s. This isn’t necessarily a bad thing and I like the funny little yellow painted beach shelters with their wrought iron decorations and the pretty lamp posts with old fashioned lamps. It does mean it’s a bit short on the usual coffee shops and the like though. 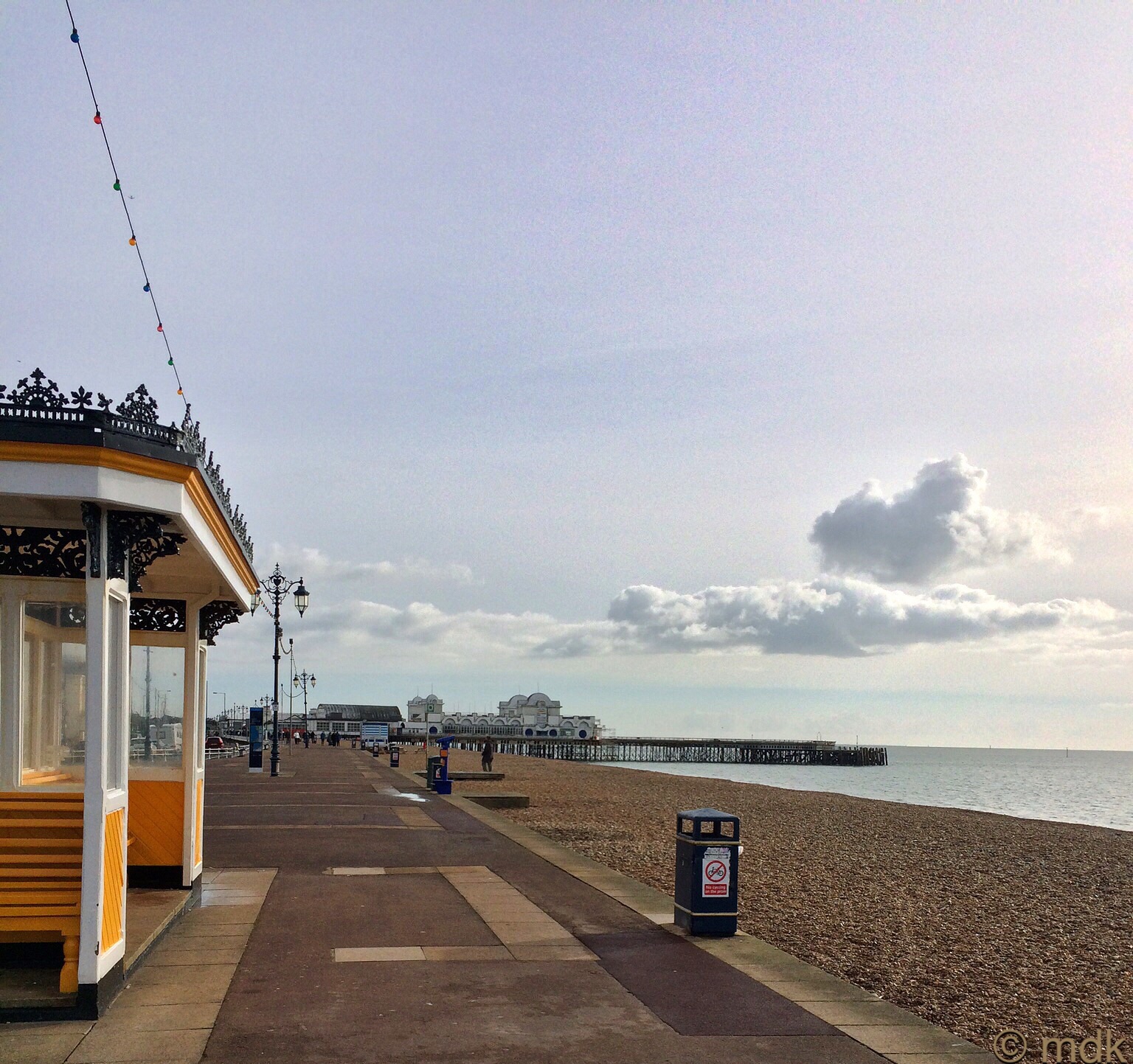 Out at sea the round, squat sea forts stand guard, much as the remains of the round, squat castle stands on the shore. There was no time to explore the castle, built by Henry VIII To defend this southernmost point of Portsmouth, and no way to get to the forts. These three Palmerston forts were built of concrete and granite between 1865 and 1880 making Portsmouth one of the most strongly defended places in the world. These days they’re not used for defence purposes and one, Spitbank Fort, has been converted into a luxury hotel. 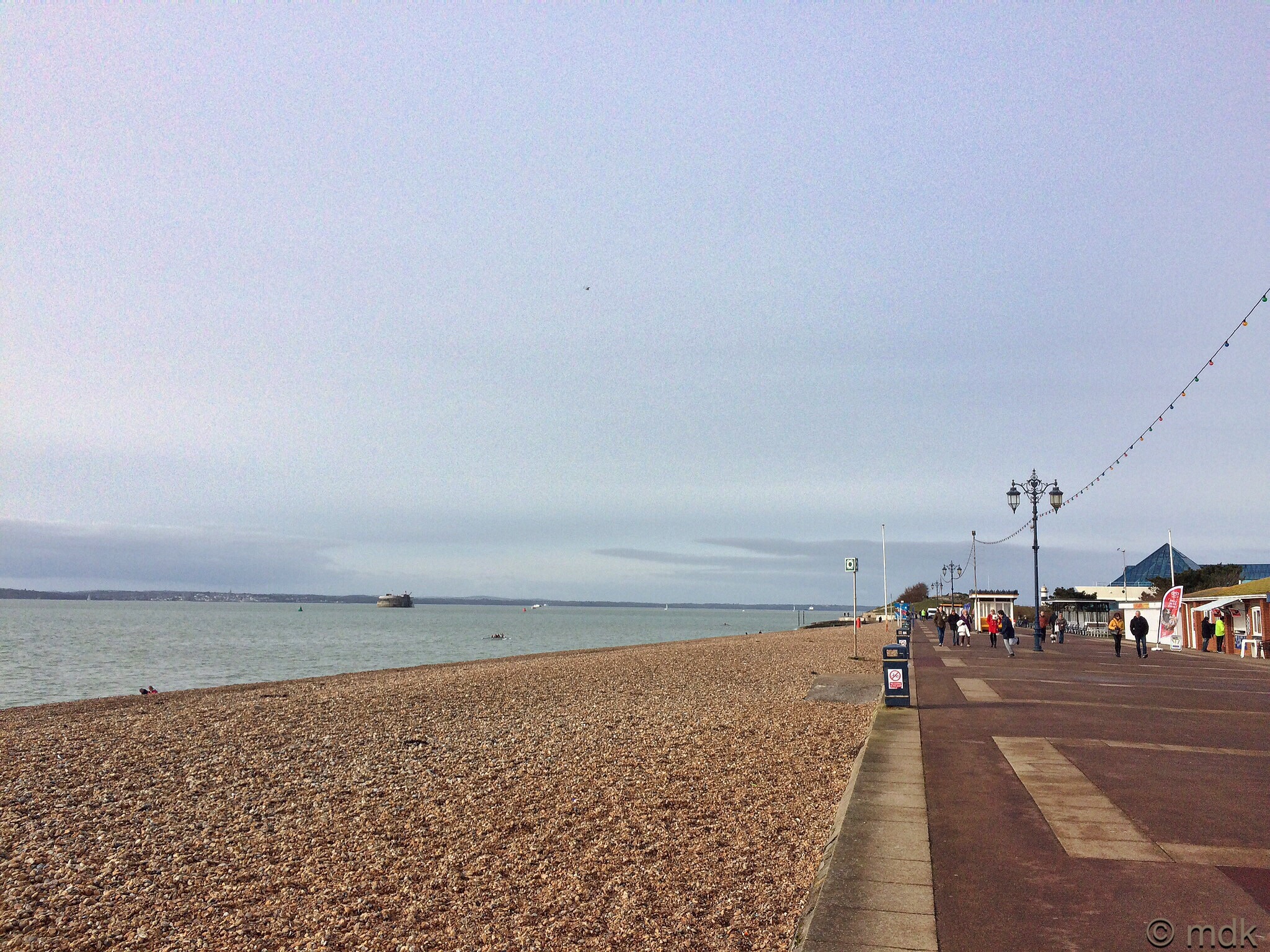 Before long I was approaching the domes and arches of South Parade Pier. There are two piers in Southsea but this is the only one that is actually a pier. Clarence Pier, at the other end of the promenade, was destroyed during the blitz and when it was rebuilt the pier part was omitted, leaving it a pier in name only. South Parade Pier was built in 1879, shortly after the original Clarence Pier, as  a ferry terminal for the Isle of Wight. Unfortunately, it was destroyed by fire during the filming of the Who’s rock opera, Tommy. It was rebuilt but these days stands empty and boarded up. Quite what the future holds for it remains to be seen but it would be a shame if it was lost forever.

Amongst all the red danger signs and warnings to keep off the pier a few signs for the original attractions can still be seen. Once this would have been crowded with people, noise, music and the smells of food and I’m pretty sure there would have been somewhere to get coffee. As it was, I walked past with a smile at the race Marshall, there to ensure there were no snarl ups where the pavement narrows for the entrance to the pier. 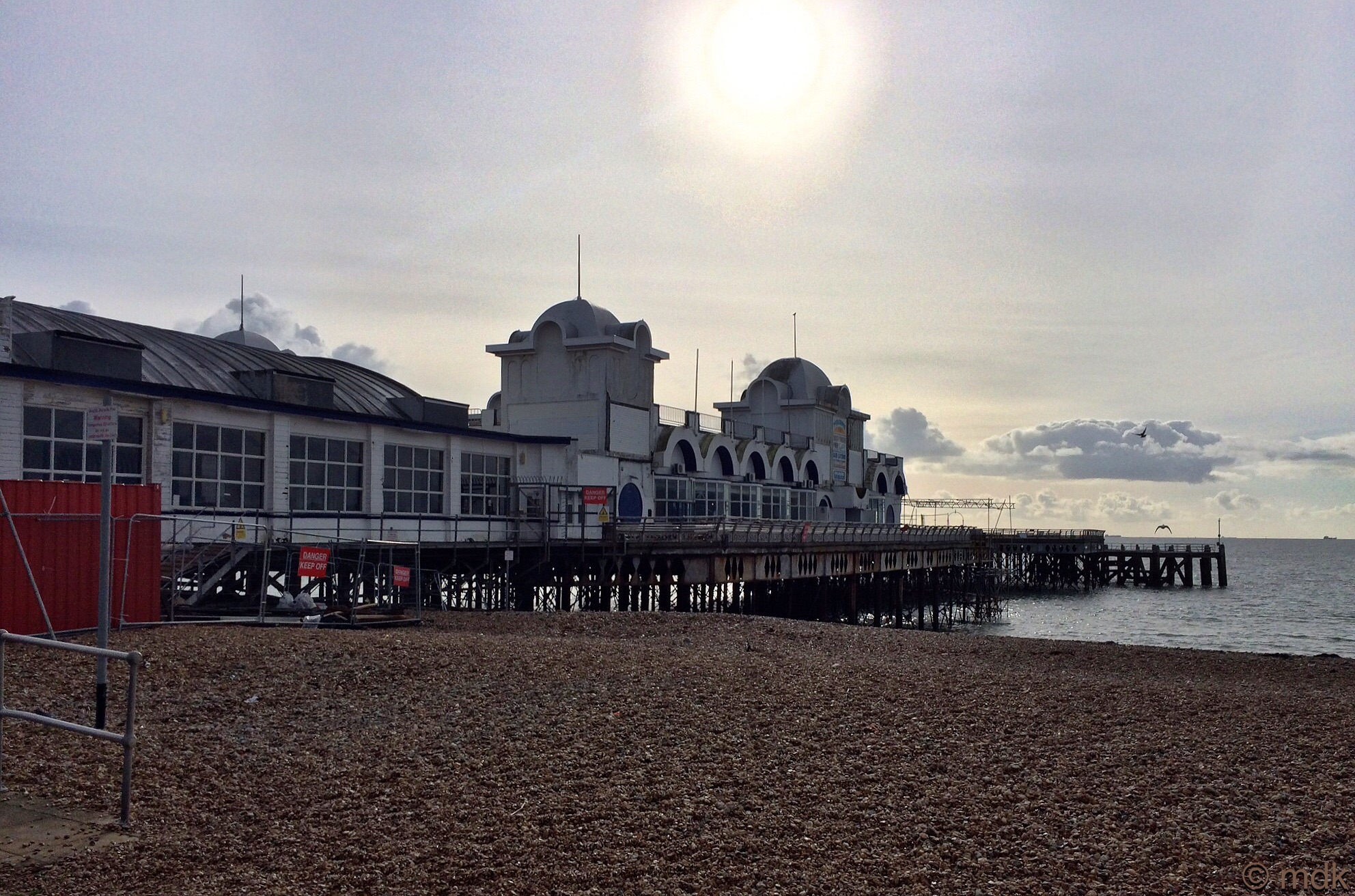 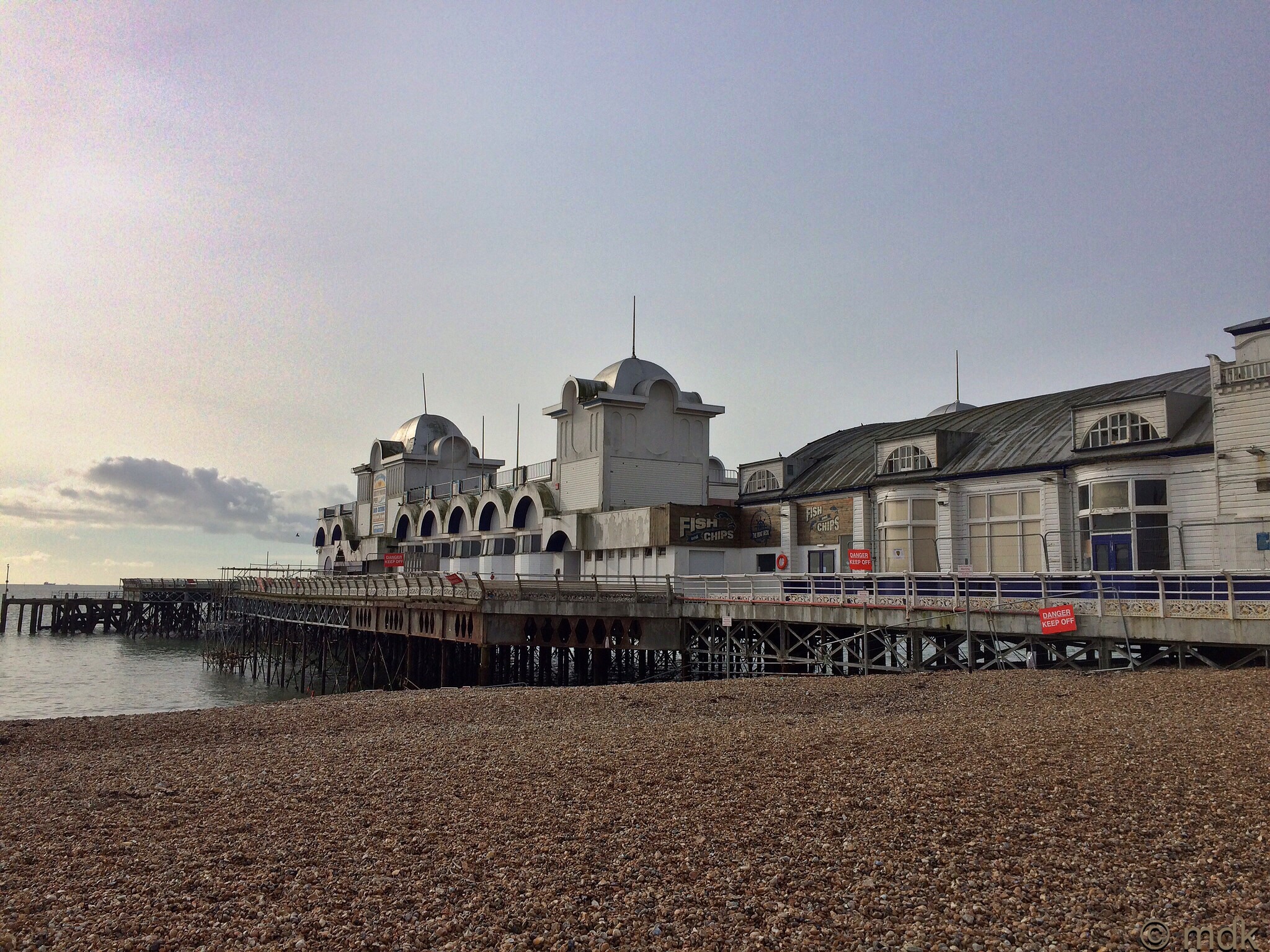 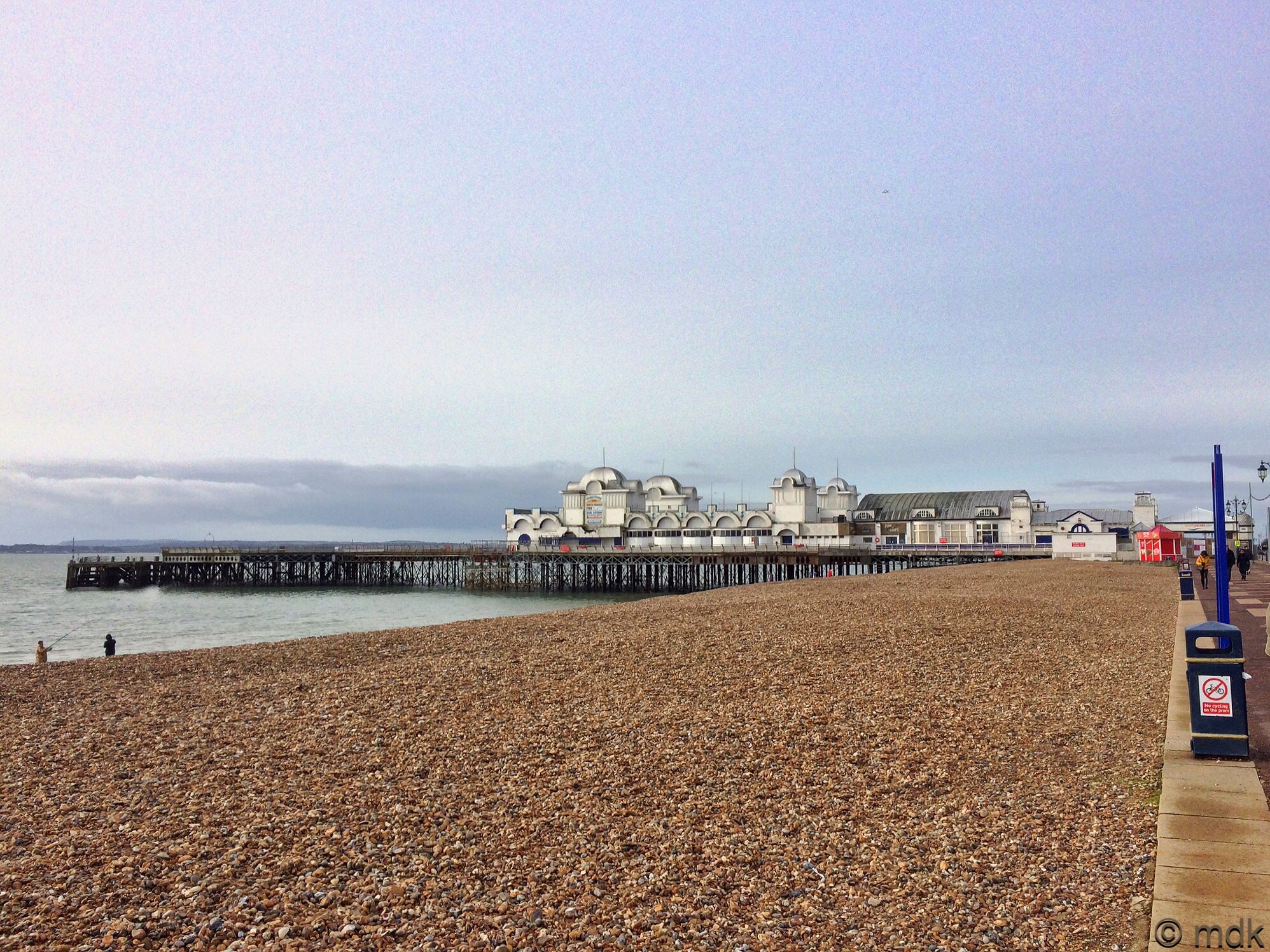 A little way on there was  kiosk selling coffee and I thought I spied some chocolate milk but there was a huge queue so I made a mental note to check it out on the way back and walked on. Further still a real coffe shop seemed promising but it was closed and looked as if it was being refitted for summer. Then I spotted another kiosk just past this. The queue seemed short, just a handful of people and, from the menu, it looked like decent coffee so I tagged on the end and fished out my purse in anticipation. A lady with a lovely chocolate Labrador joined the queue behind me and we chatted for a while. I could almost taste the coffee.

8 thoughts on “Rock gardens, piers and the muddy beach run 2015”